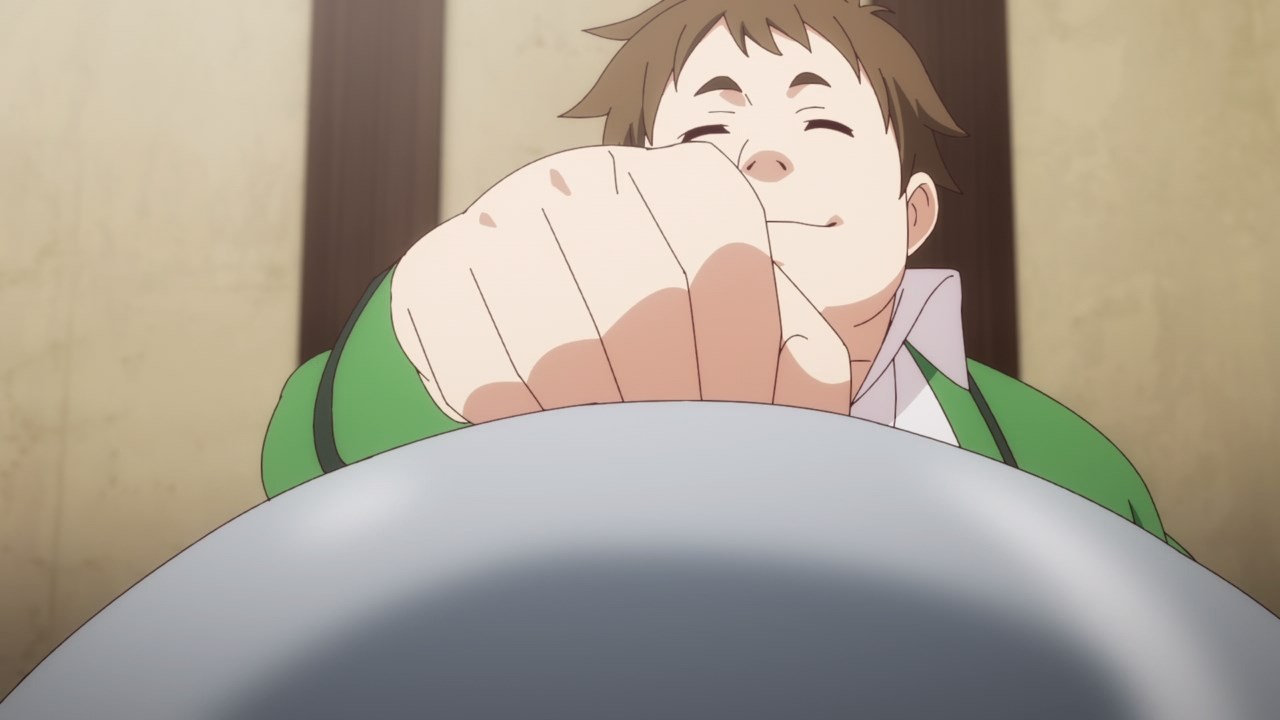 Well everyone, here’s Poncho Panacotta where he’s about to reveal the last ingredient for this Gemstone Broadcast. What could it be? 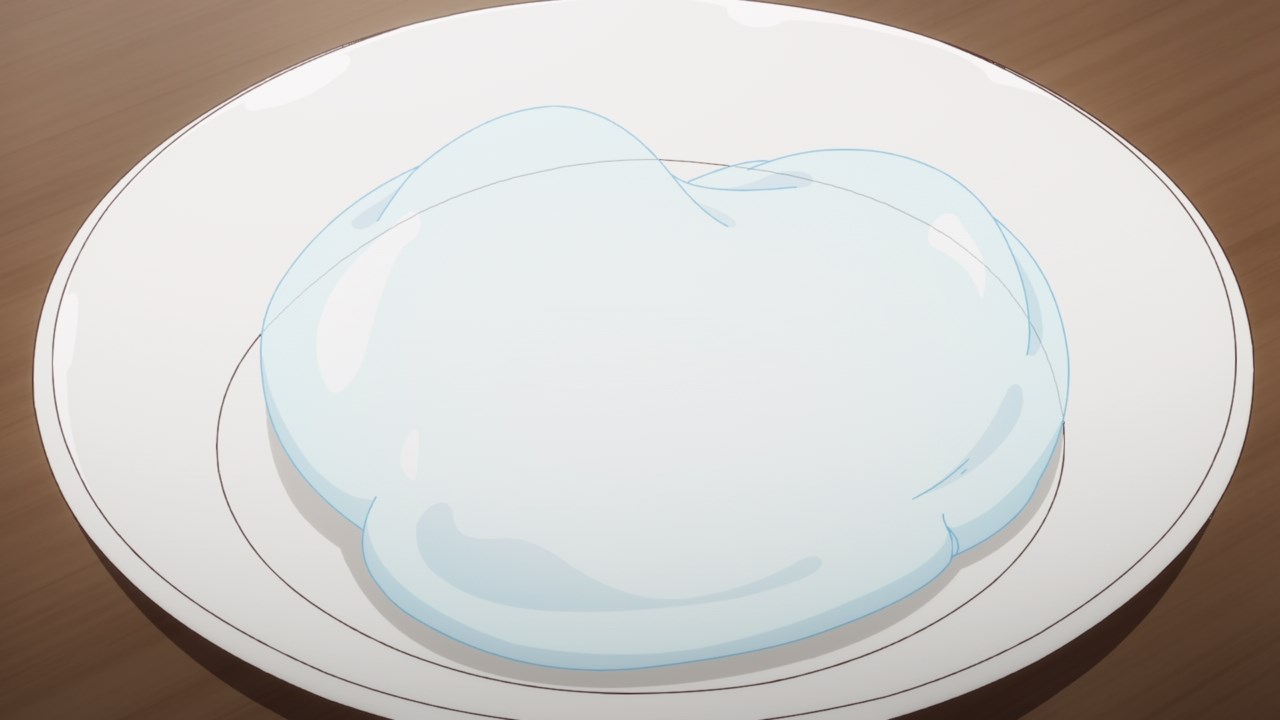 Well, Ishizuka revealed that the secret ingredient is gelin carcass. Basically, it’s a slime where the nucleus is destroyed, leaving only its gelatinous body. 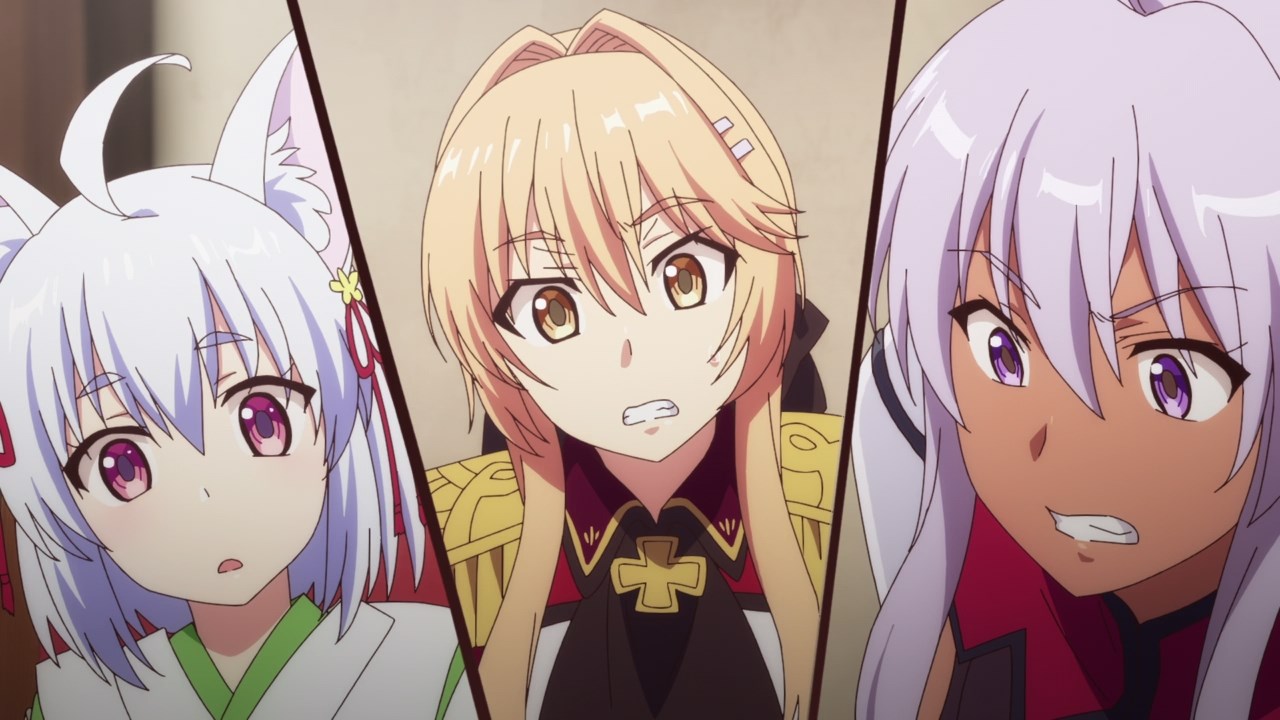 Of course, Liscia Elfrieden and the rest are disgusted on eating exotic food, especially when they’re gonna eat monster meat.

But c’mon, they already eat cockroaches in the previous episode so there’s no excuse on getting grossed-out. 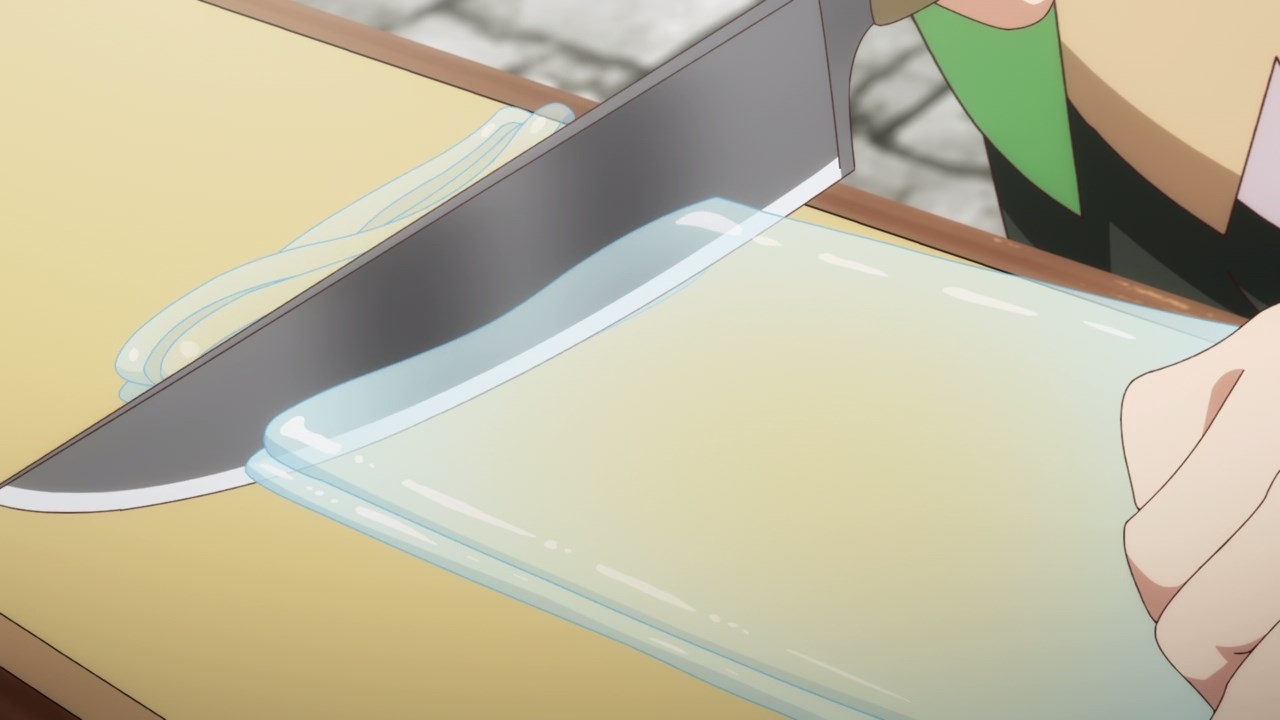 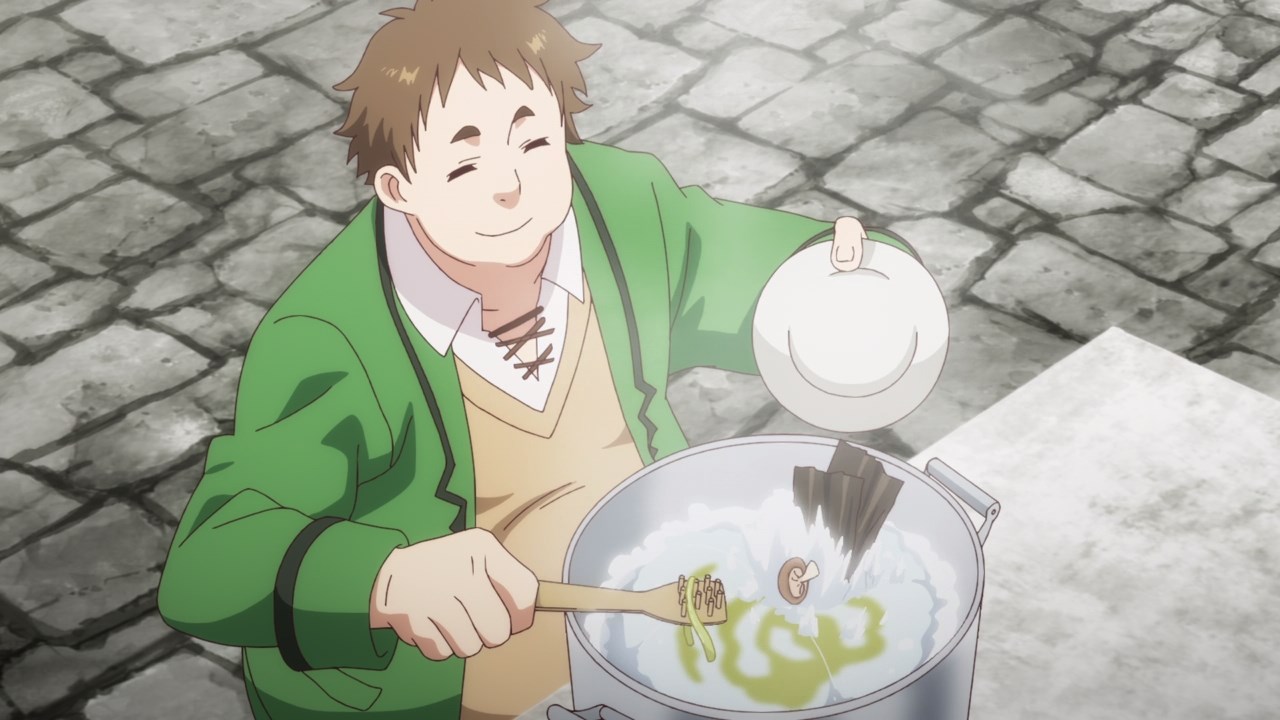 With that said, Poncho Panacotta cut the gelin carcass into strips, the boil them into a pot along with various ingredients. Wait a minute, Ishizuka is making udon noodles! 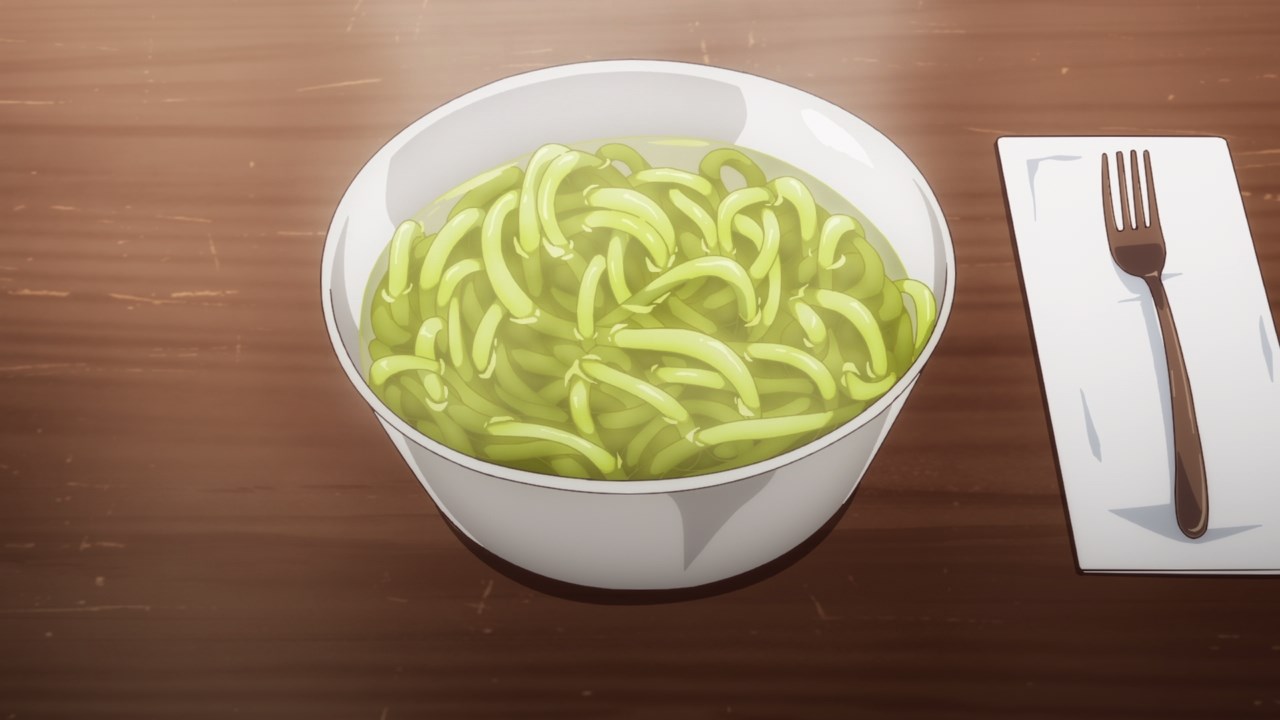 But anyways, looks like Poncho is done making udon noodles using gelin carcass. Man, it’s wild that slimes can be used to make noodles in place of flour and water. 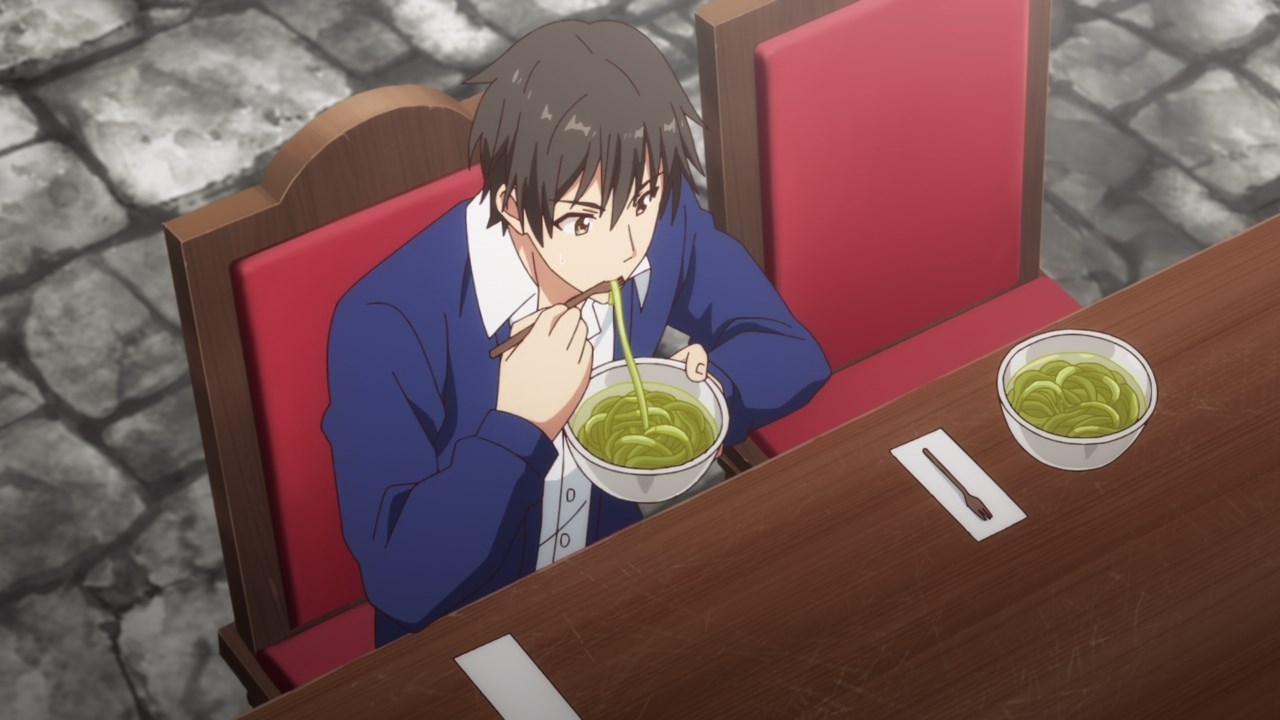 Of course, the only thing they want to know is the taste as King Kazuya Souma takes the first bite. 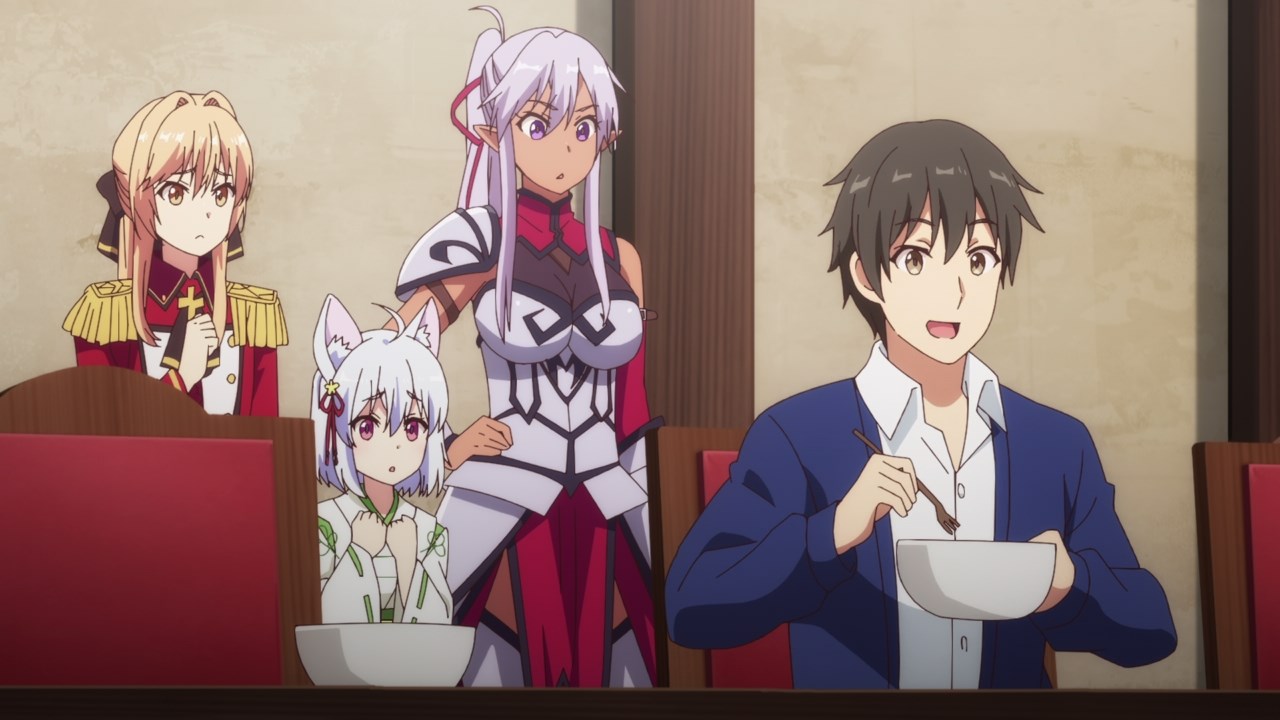 Fortunately, turns out that Poncho’s gelin udon noodle is quite delicious in which King Kazuya ate a whole bowl of it. Guess it’s time to hunt some slimes as alternative food then.

But that’s the end of the Gemstone Broadcast as Ishizuka will have more exotic foods to show in another time. 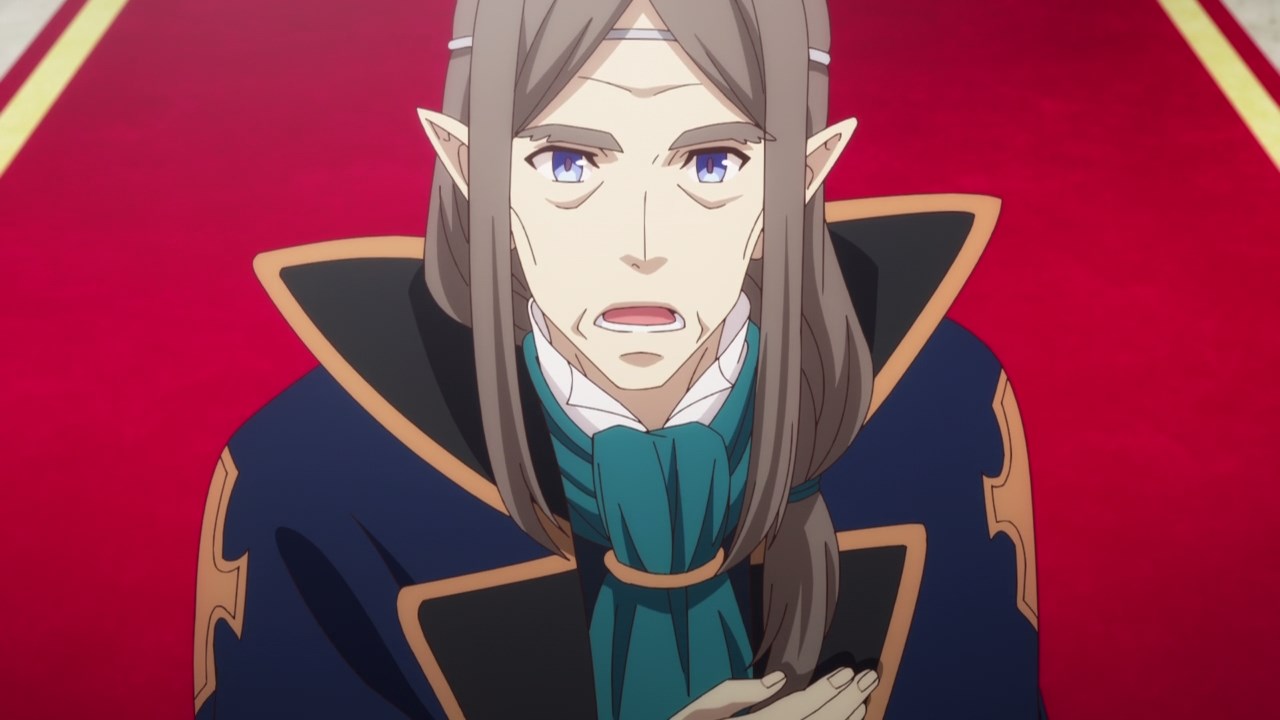 Now then, here’s Marx where he told King Kazuya Souma that he’ll be stepping down as prime minister, leaving Hakuya Kwonmin as his successor.

While he won’t have any retirement bonus due to the kingdom’s financial crisis, I’m hoping that Marx will stick around when the situation gets tough in Elfrieden. 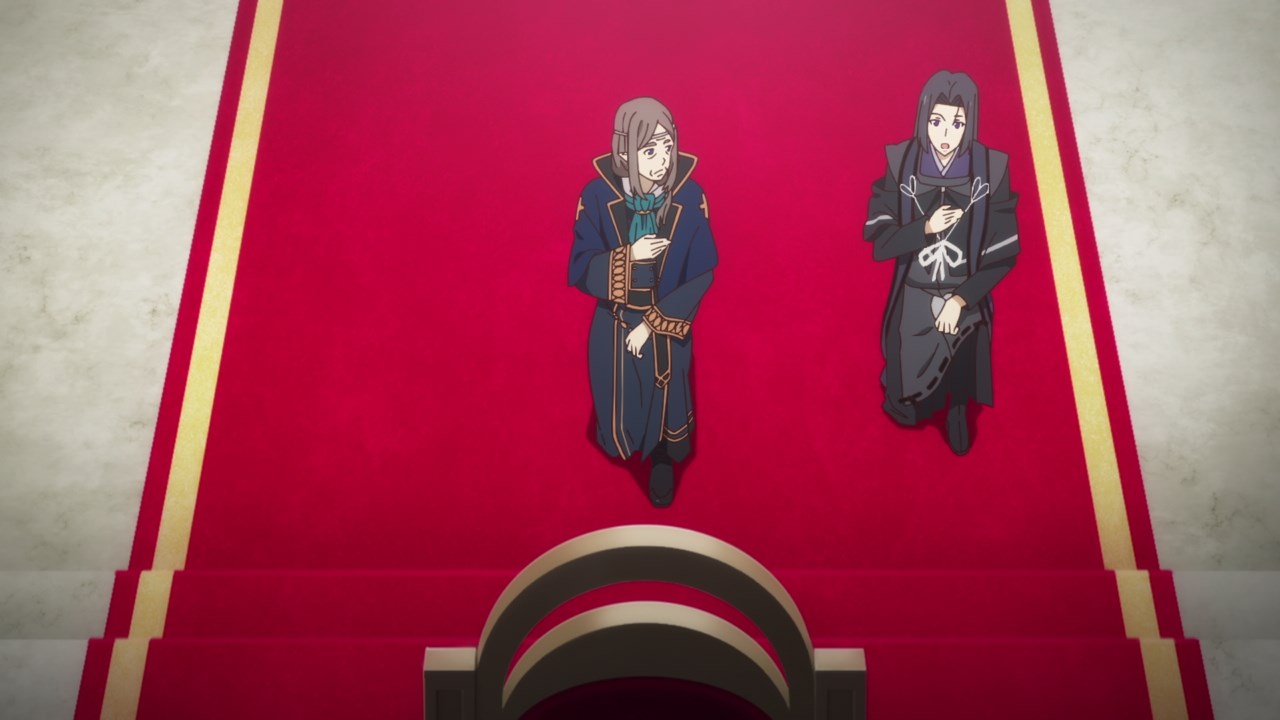 Oh yeah, here’s Hakuya Kwonmin where the newest prime minister told the king to have a vacation ’cause it would be bad if Kazuya Souma works all day without getting some rest. Nice idea there, Hakuya! 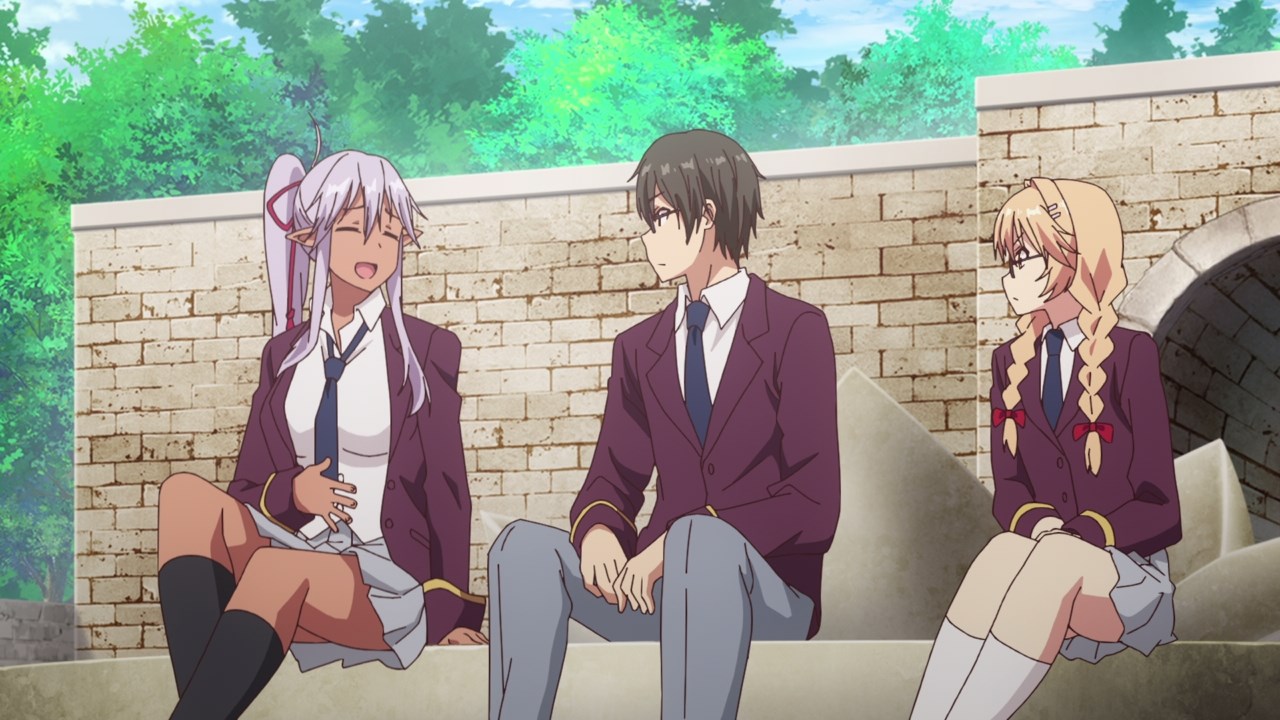 And so, Kazuya Souma went outside together with both Aisha Udgard and Liscia Elfrieden. Of course, they can go outside freely without having a disguise, so they wear school uniforms for this occasion.

You know something, they look great as high school students but c’mon, they’re not teenagers by the way. 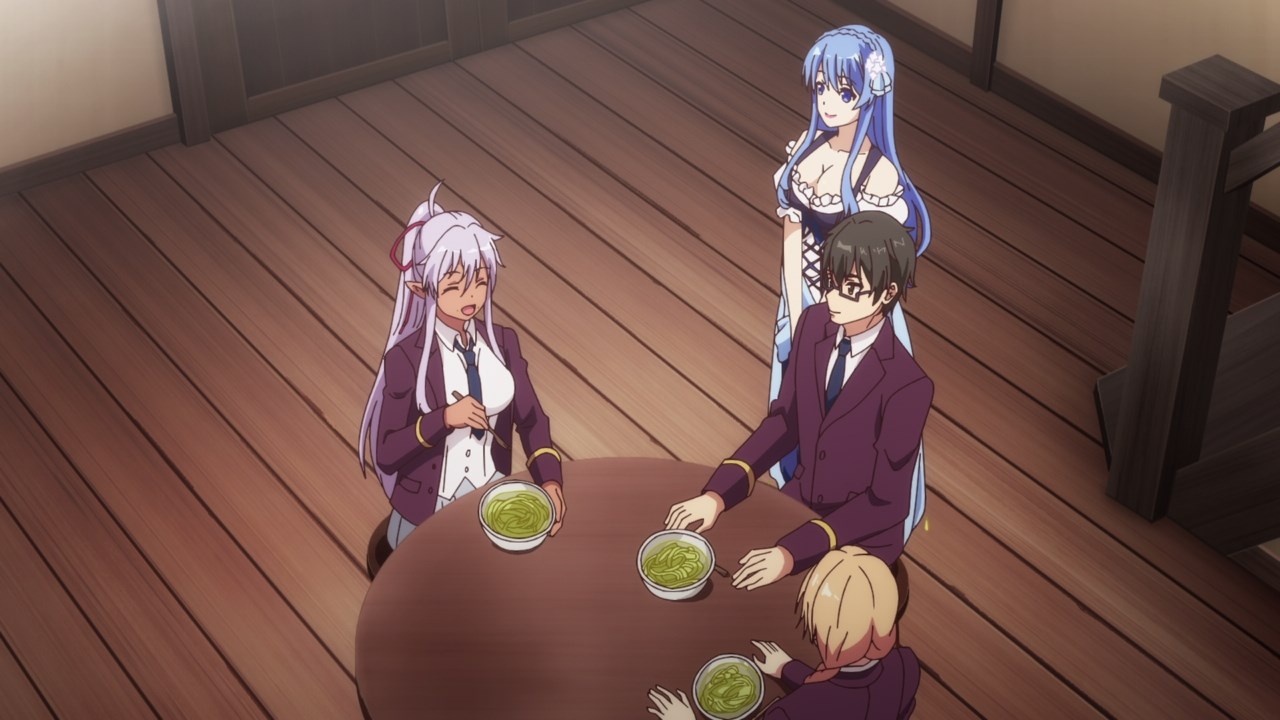 By the way, I have a feeling that Kazuya Souma will have a harem soon enough as he’s not only engaged to Liscia Elfrieden, but the likes of Juna Doma and Aisha Udgard are attracted to him. 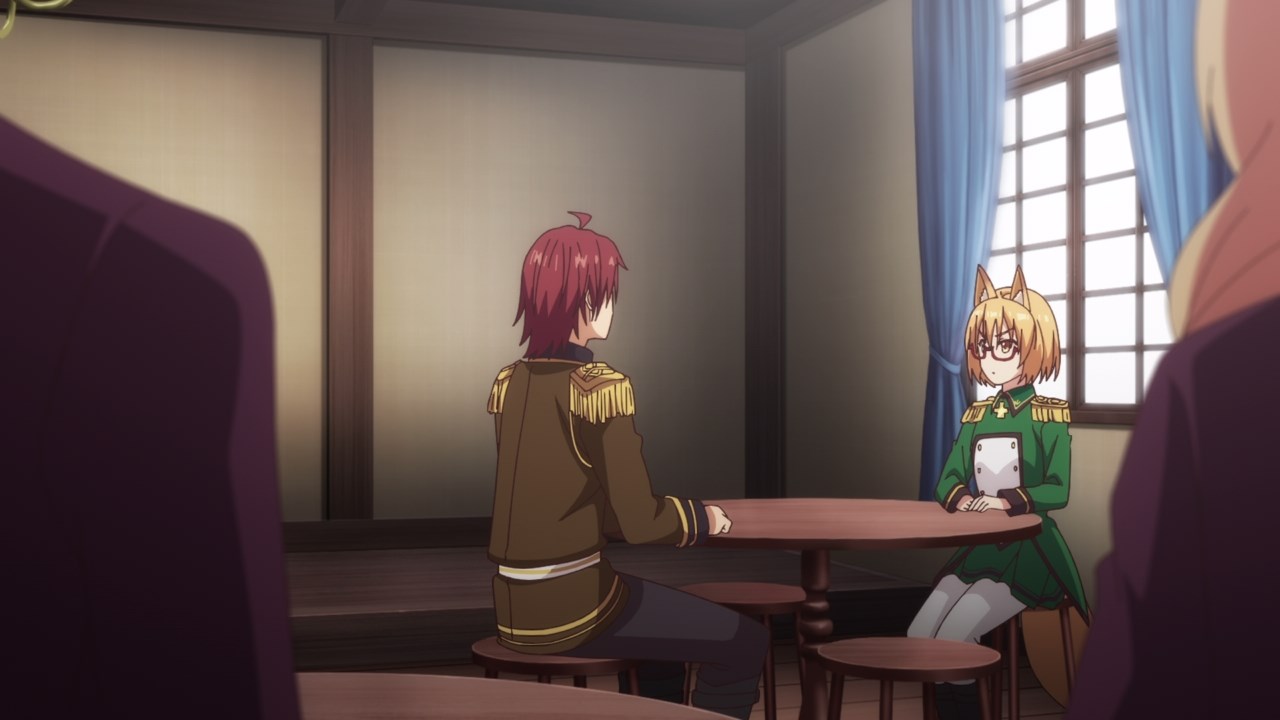 For now, let’s end this episode where Kazuya and his friends encountered two people having an argument. Oh boy, looks like the king will get involved on this scuffle on the next episode.