Posted on September 3, 2021 by benigmatica 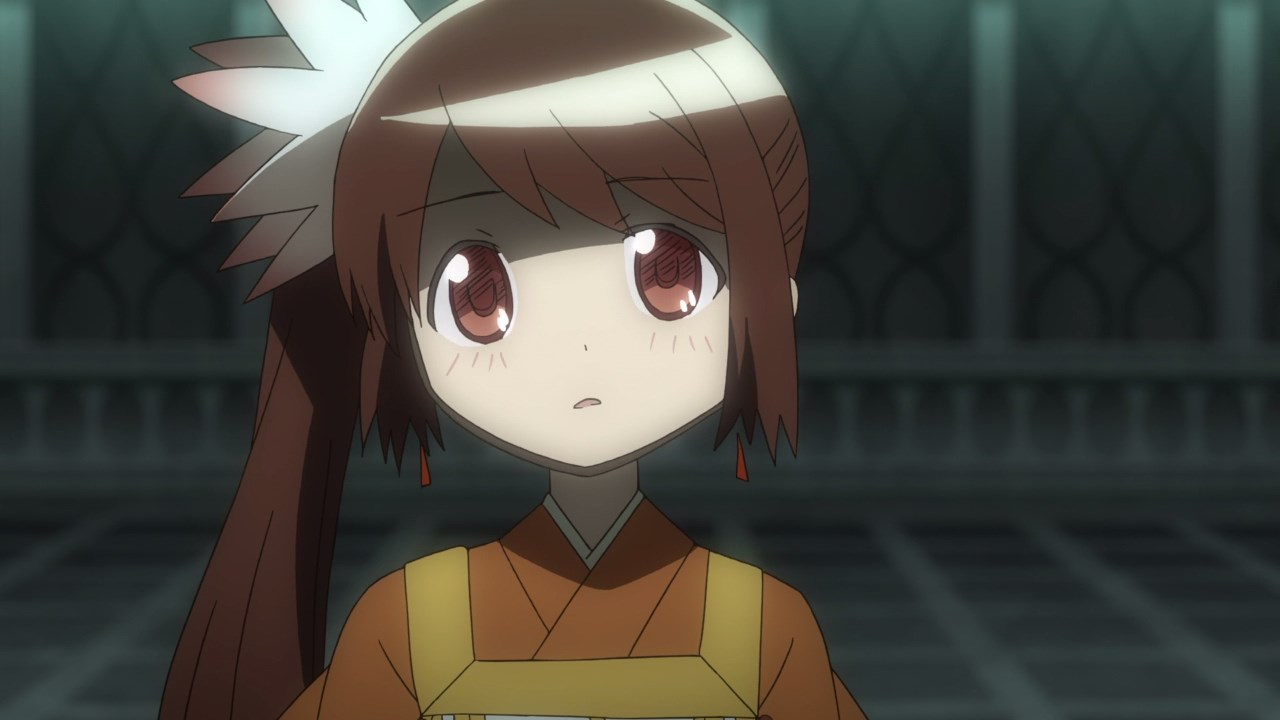 Oh look what we have here, it’s Tsuruno Yui where she’s acting weird lately. Ever since joining Magius, Tsuruno doesn’t show her cheerful emotions much. 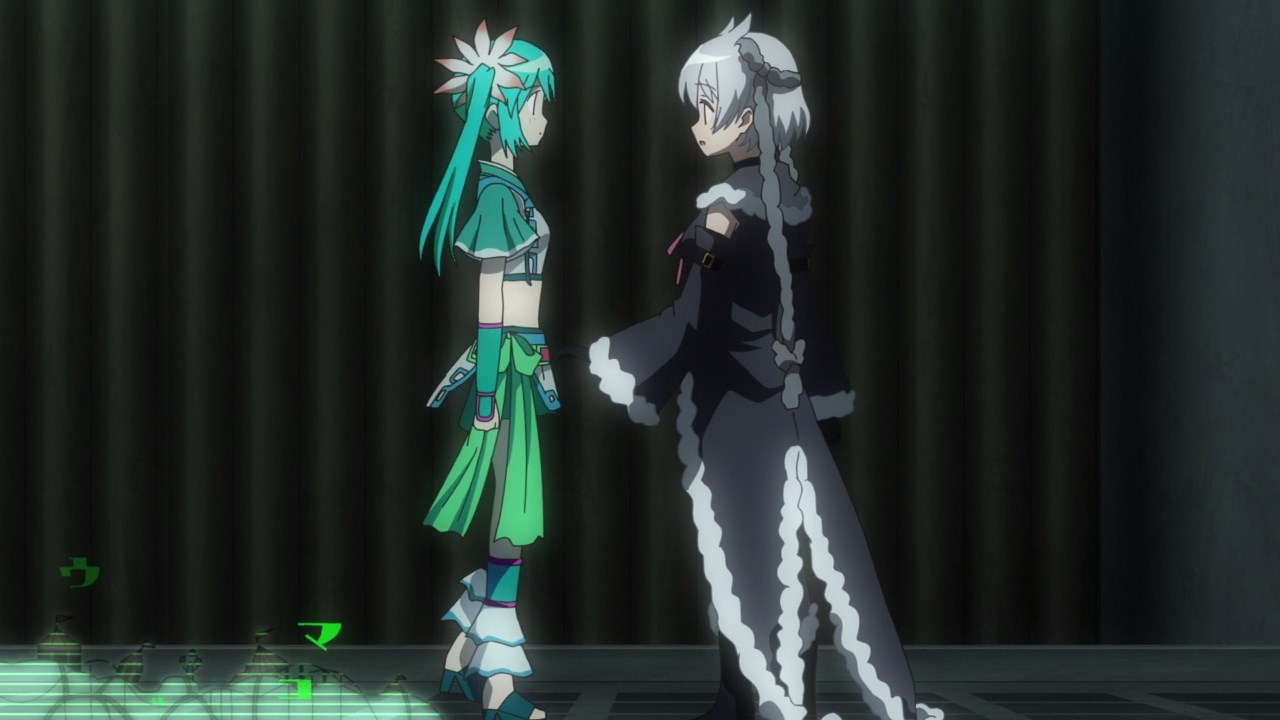 On top of that, Yui’s body is phasing in and out for some reason that Mifuyu Azusa is really concerned about her.

Oh boy, is Tsuruno being affected by an Uwasa, or that she’s becoming a witch? If she becomes the latter, Magius will have to kill Yui in order to proceed their greatest plan. 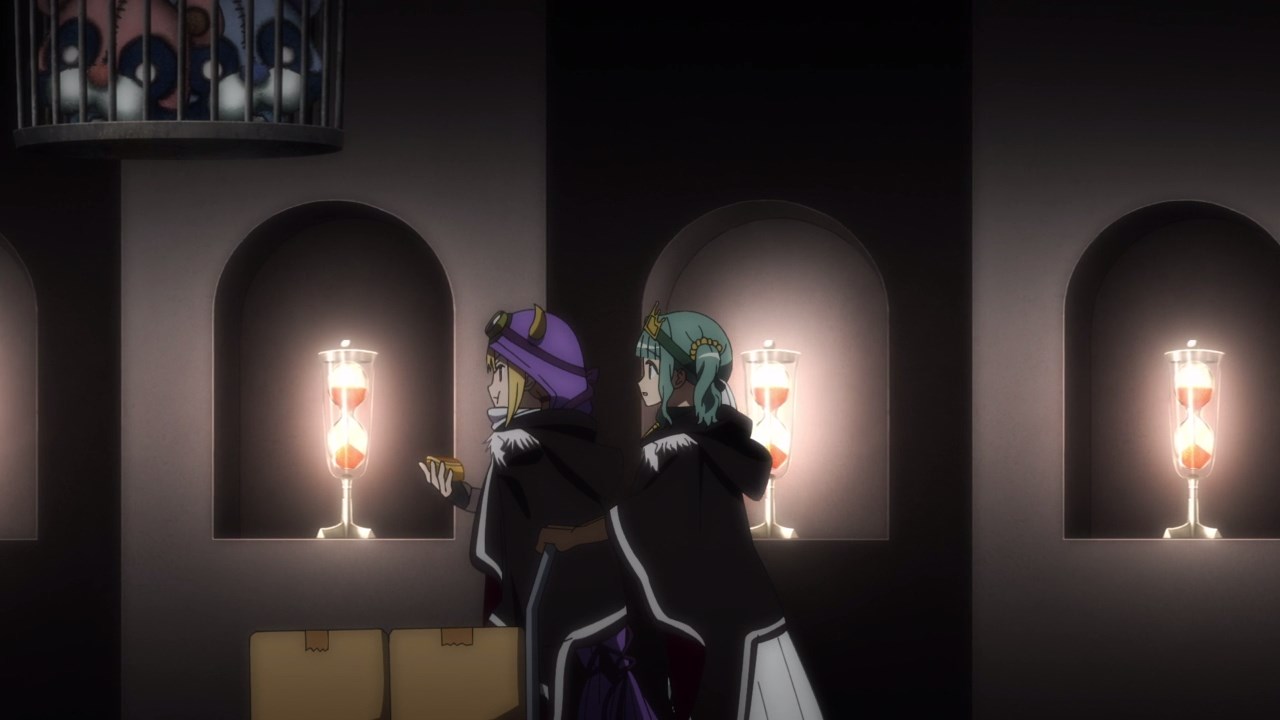 Meanwhile, here’s both Felicia Mitsuki and Sana Futaba where they’re currently on guard duty, although these two magical girls should run away as soon as possible. 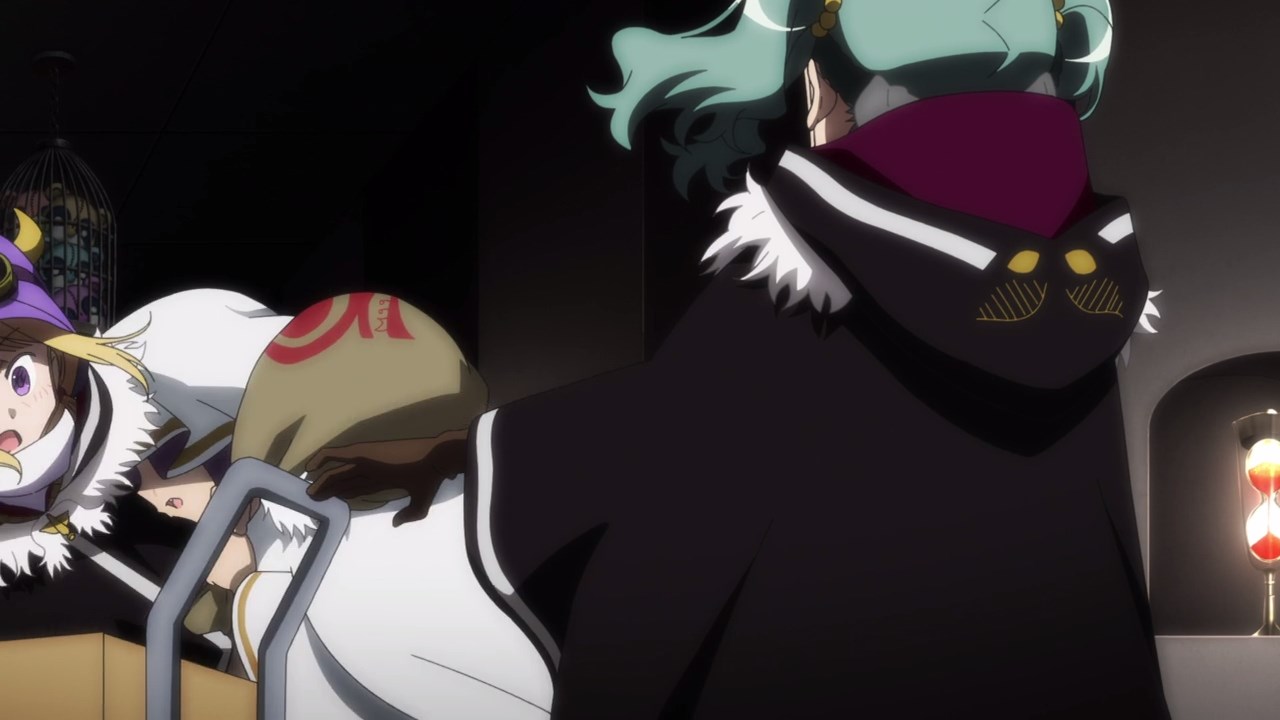 On the other hand, they bump onto a certain magical girl who’s currently running away from someone. Who could that person be? 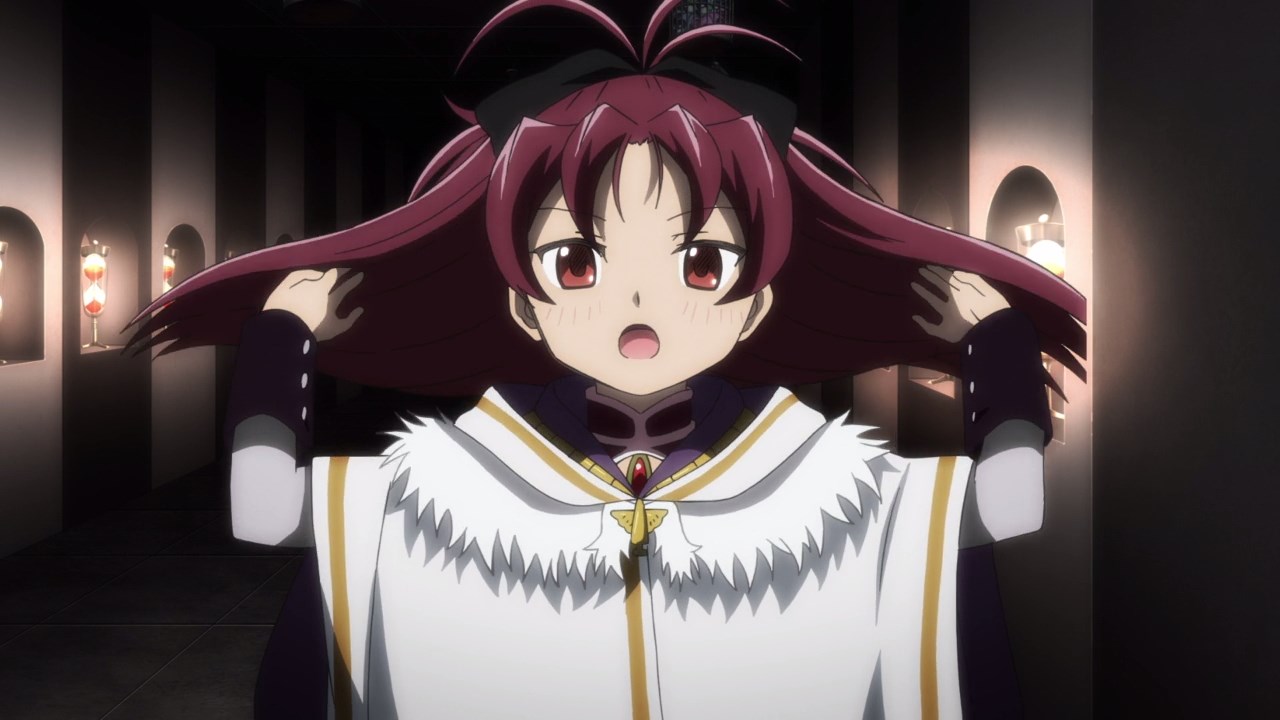 Why it’s none other than Kyouko Sakura as she stole some useful things such as Grief Seeds. C’mon, magical girls need to clean their Soul Gems everytime. 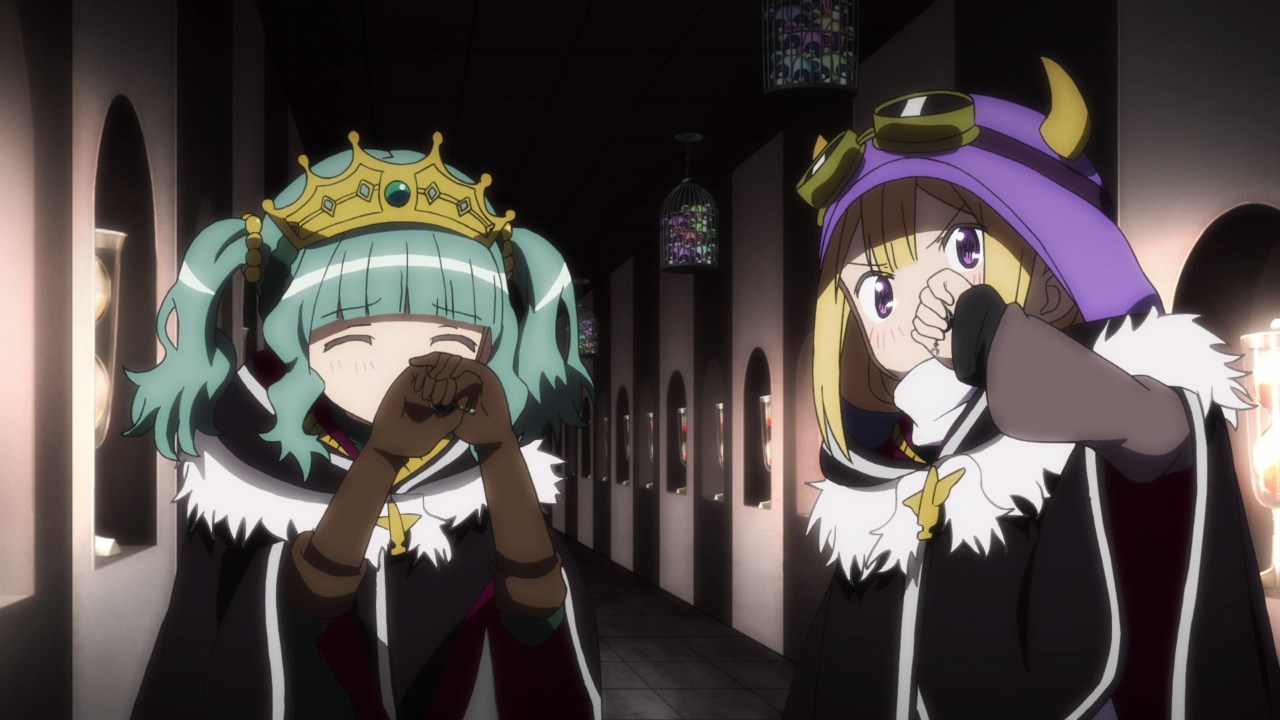 Anyways, looks like Felicia and Sana receive some Grief Seeds from Kyouko-san, meaning that their Soul Gems will be cleansed from impurities.

Of course, they need to get out of Hotel Faint Hope as soon as possible as Magius is about to enact their greatest plan. 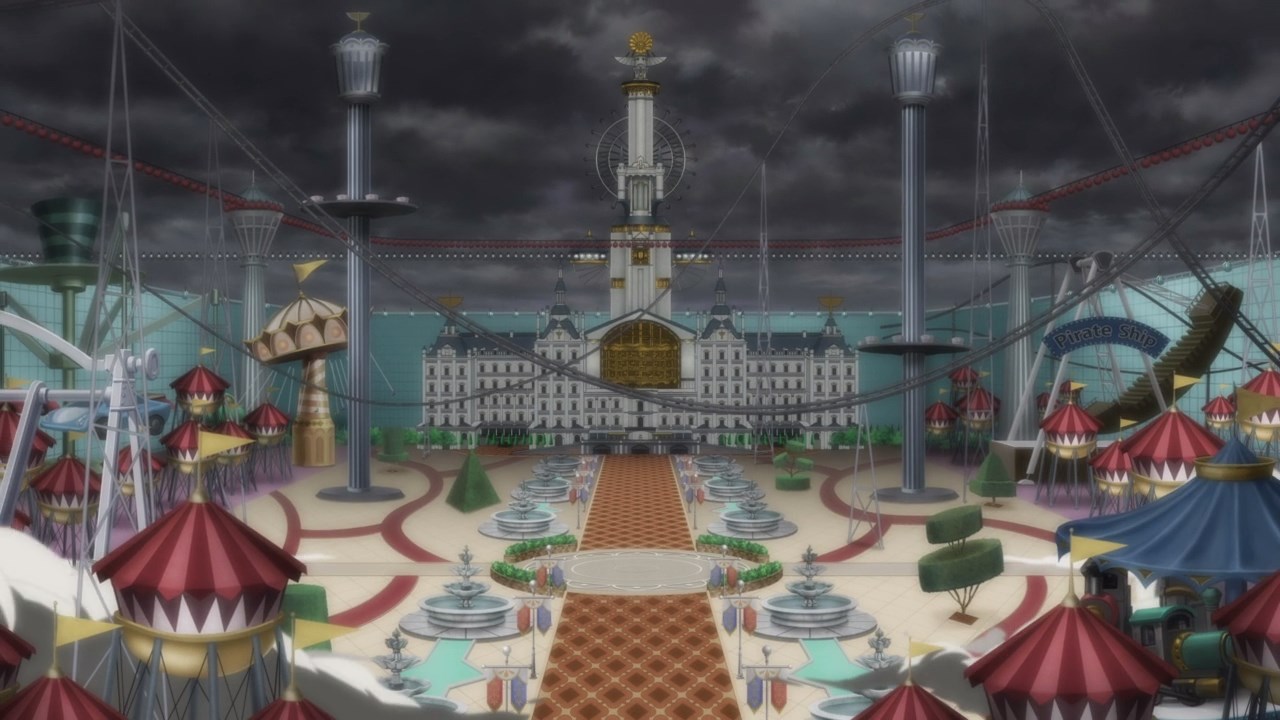 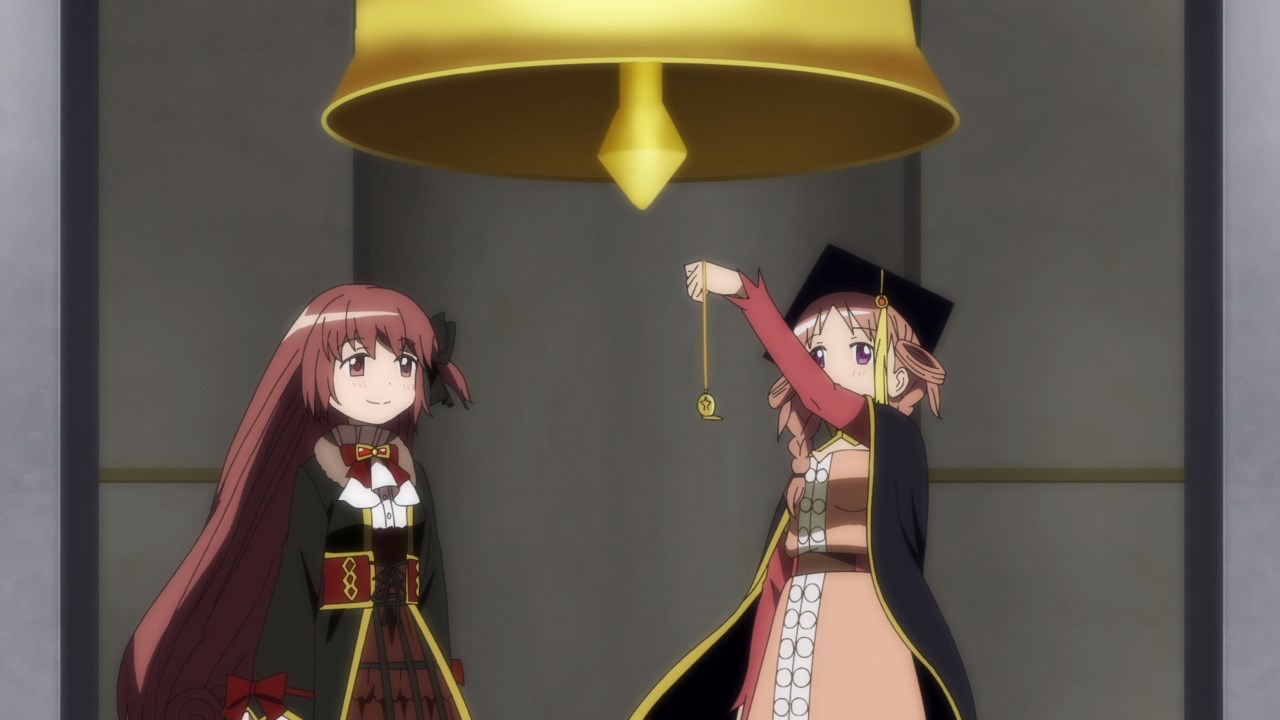 Oh yeah, here’s both Touka Satomi and Nemu Hiiragi where they’re about to commence their plan on saving witches, although the latter has some doubts on succeeding it. 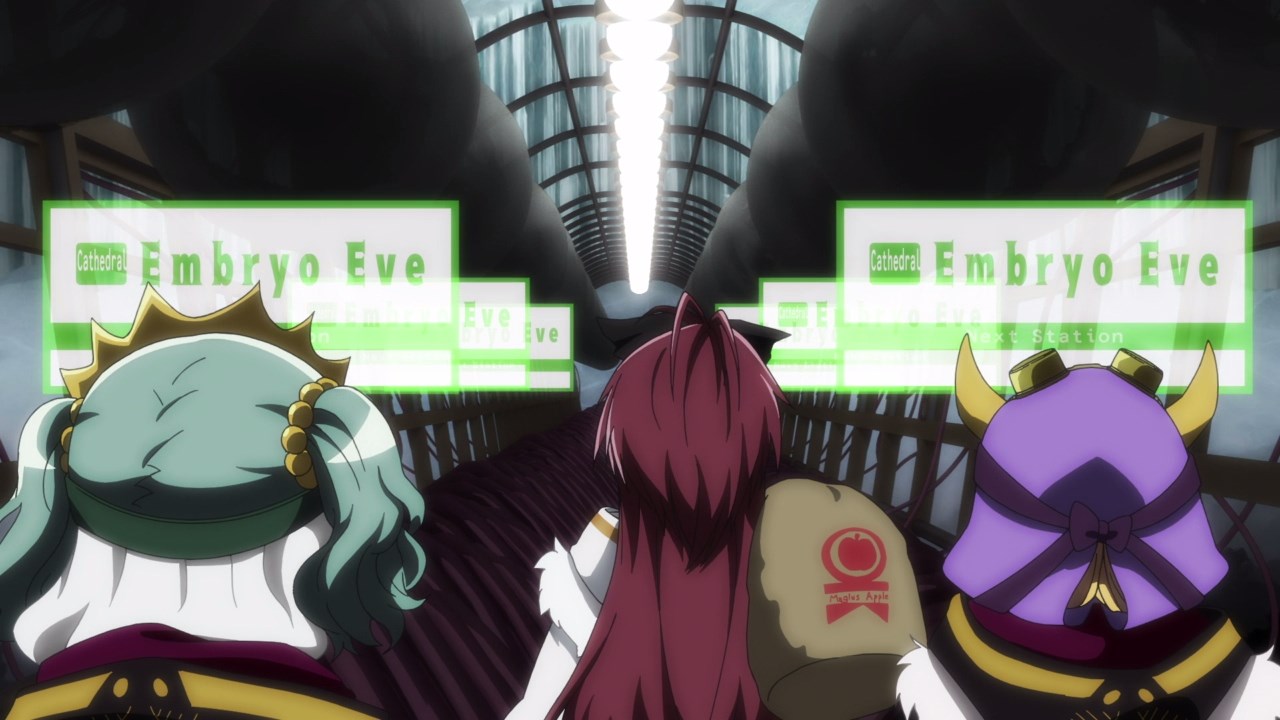 Meanwhile, Kyouko Sakura and the rest stumbled upon the witch factory where Magius breeds witches for something diabolical. Even Felicia Mitsuki is disgusted to see it.

Oh yeah, are you curious on what will Touka Satomi and Nemu Hiiragi do with those witches? 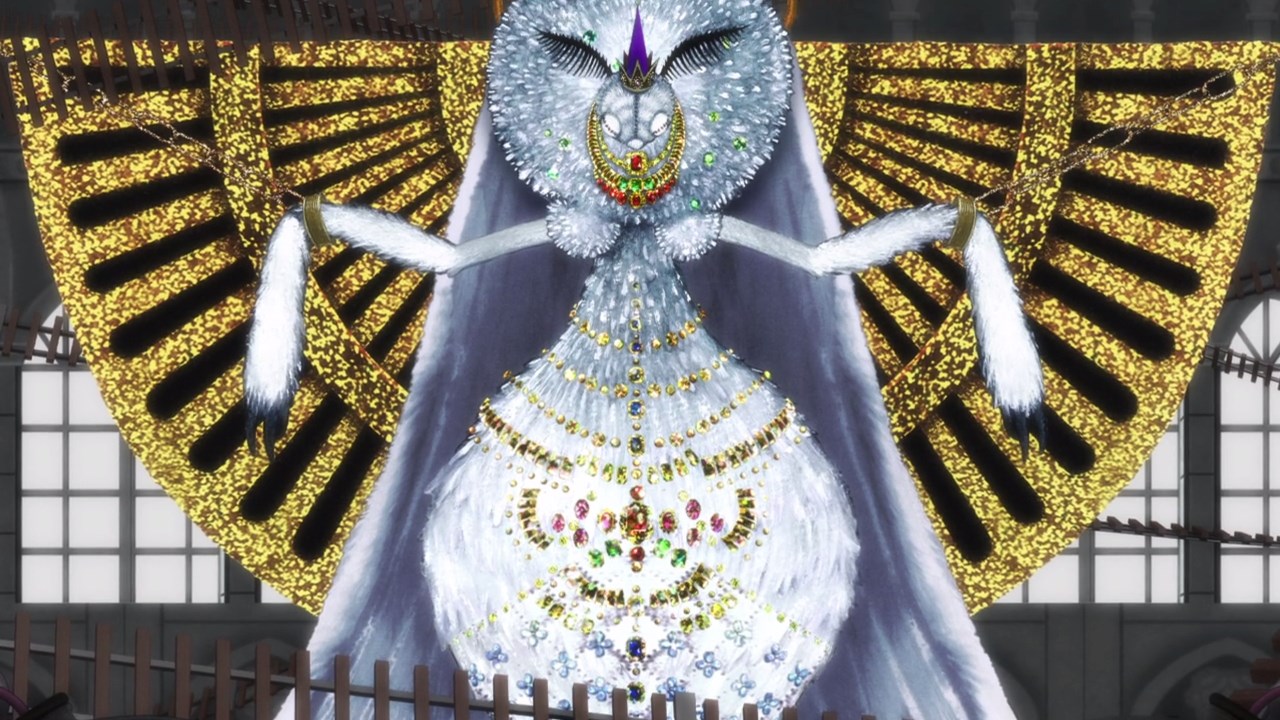 Well, the leaders will make them as food for their greatest creation: A massive artificial witch named Embryo Eve where it’s somewhat resembles Walpurgisnacht.

Wait a minute, don’t tell me that Touka and Nemu are planning to use Embryo Eve against Walpurgisnacht? That’s insanity! 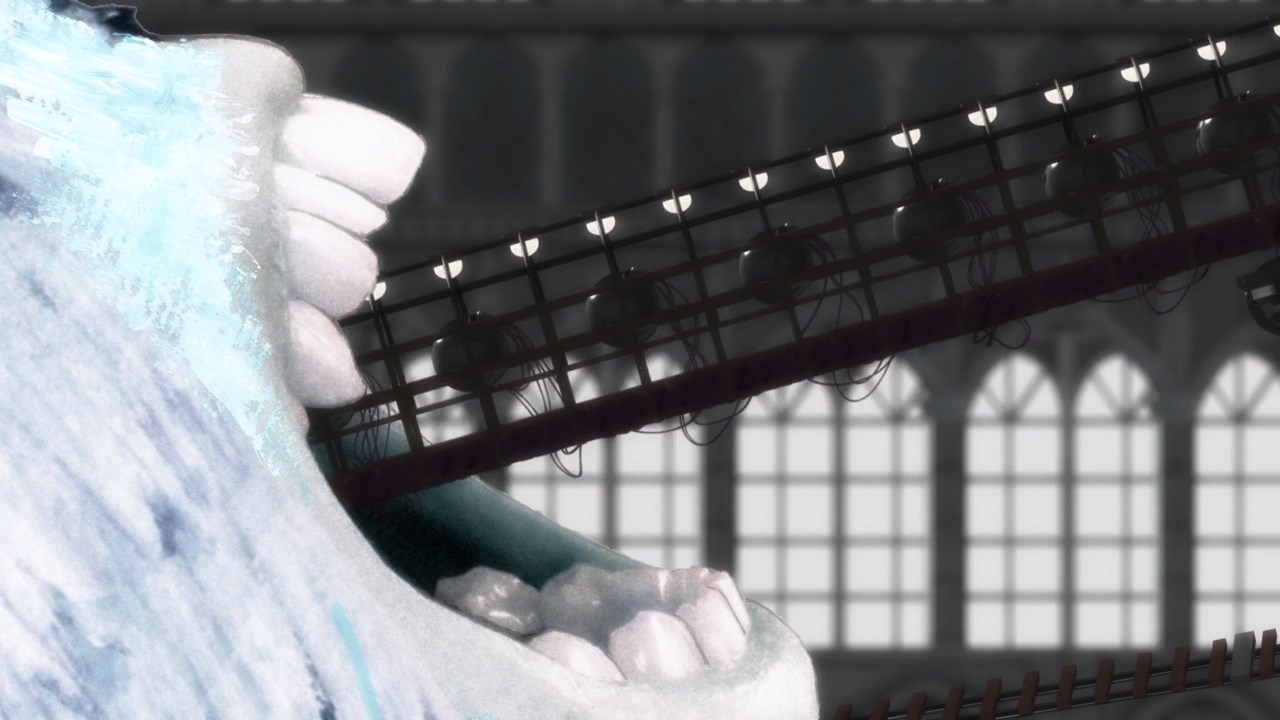 Oh yeah, they managed to get out of the train in the nick of time as Embryo Eve eats smaller witches to become stronger. This is really fucked up! 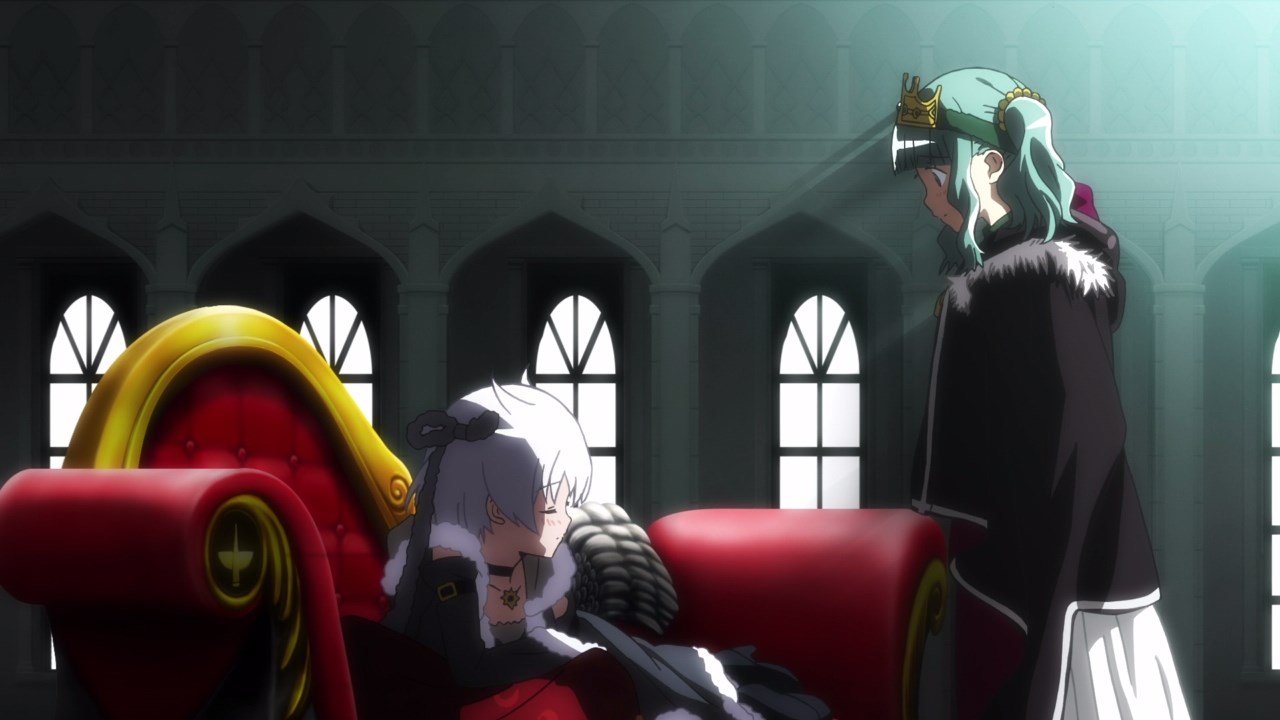 Of course, they want some answers on why Magius created a massive witch as Sana Futaba asked Mifuyu Azusa on why they made Embryo Eve. Unfortunately, Mifuyu doesn’t know the answer.

By the way, what happened to Tsuruno Yui as she’s still acting weird? Don’t tell me that Magius already apprehended her? 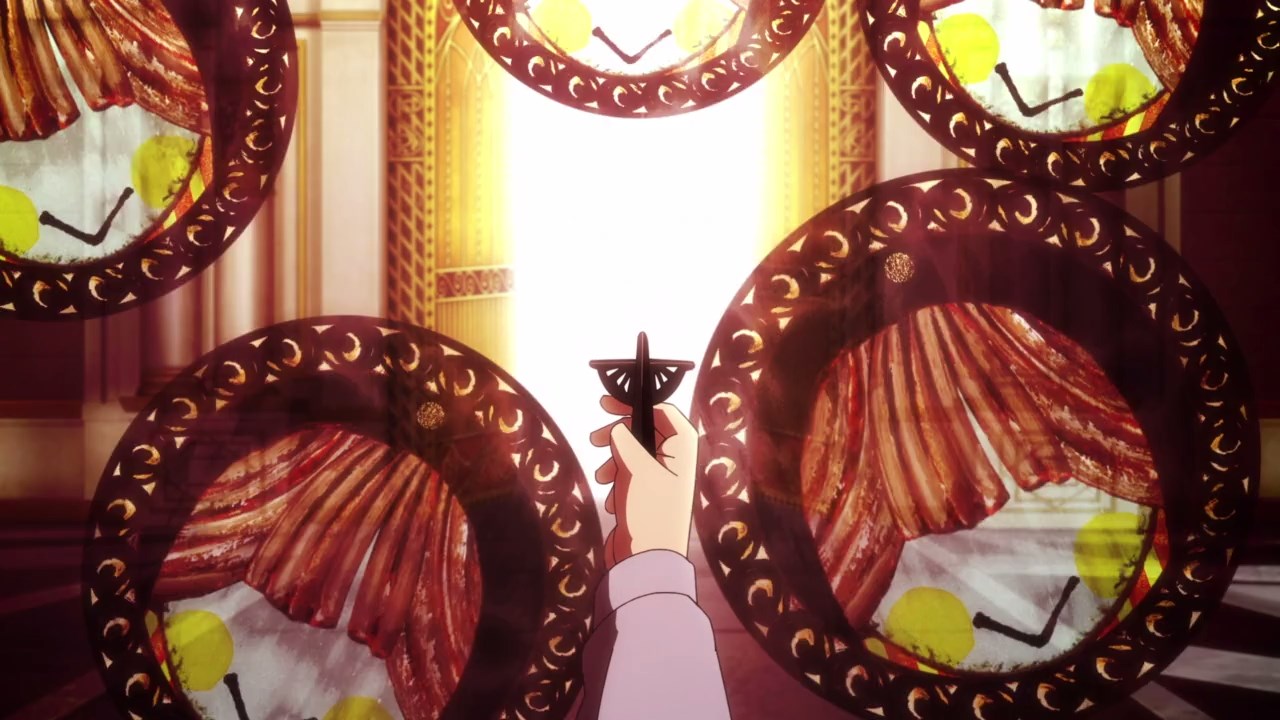 One last thing, it looks like Kuroe triggered the security system as she was denied of exiting the building.

That’s what happens when she betrays Magius so what will Kuroe do? 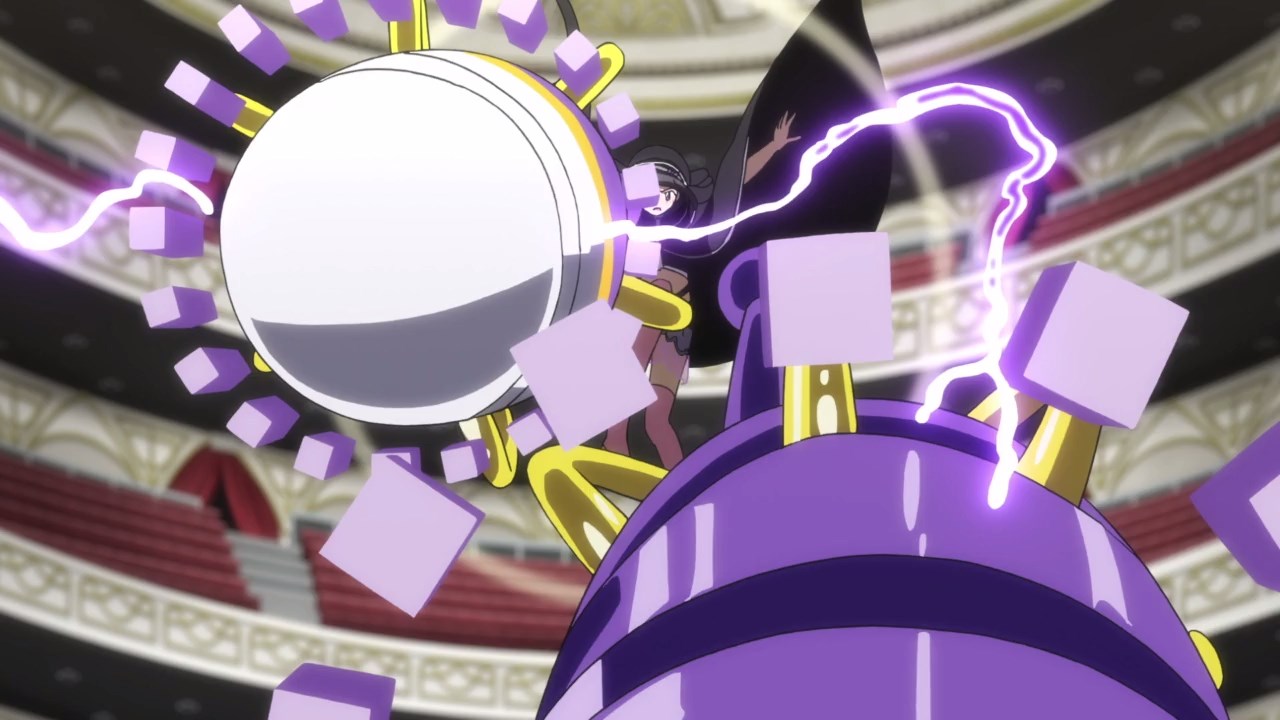 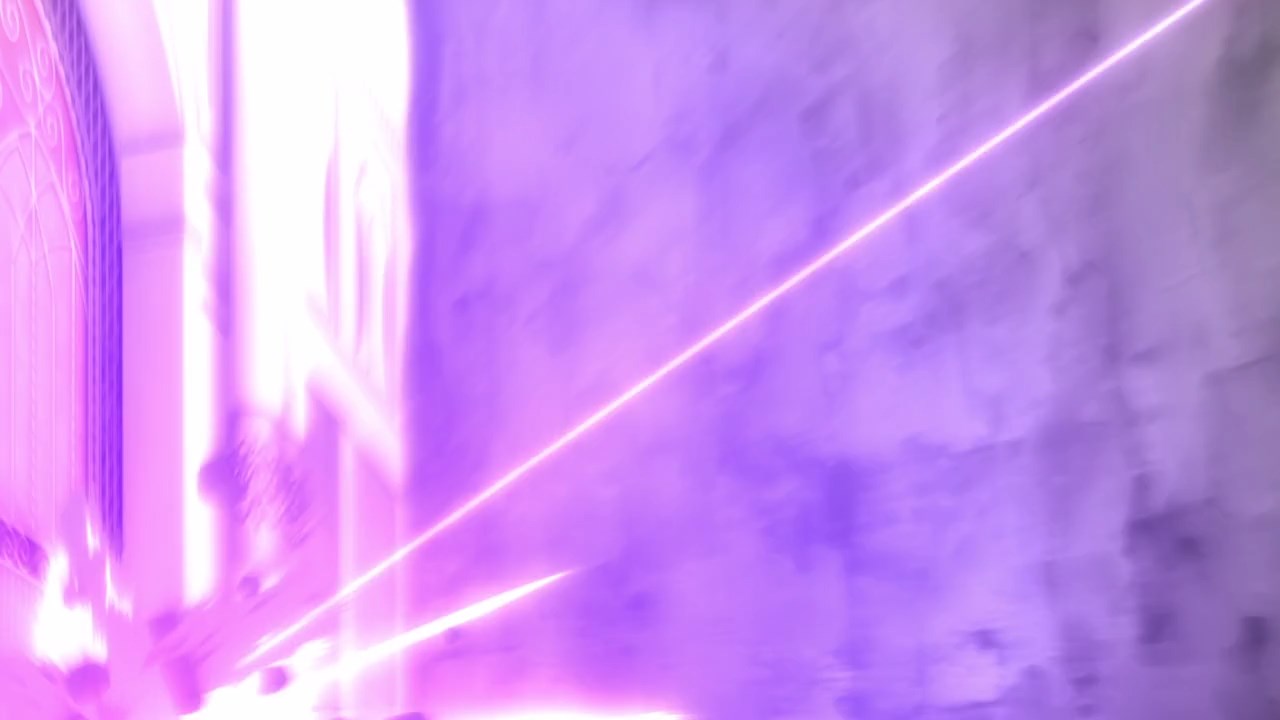 Well, looks like Kuroe will have to break a large door by throwing a mace at it. It’s super effective! 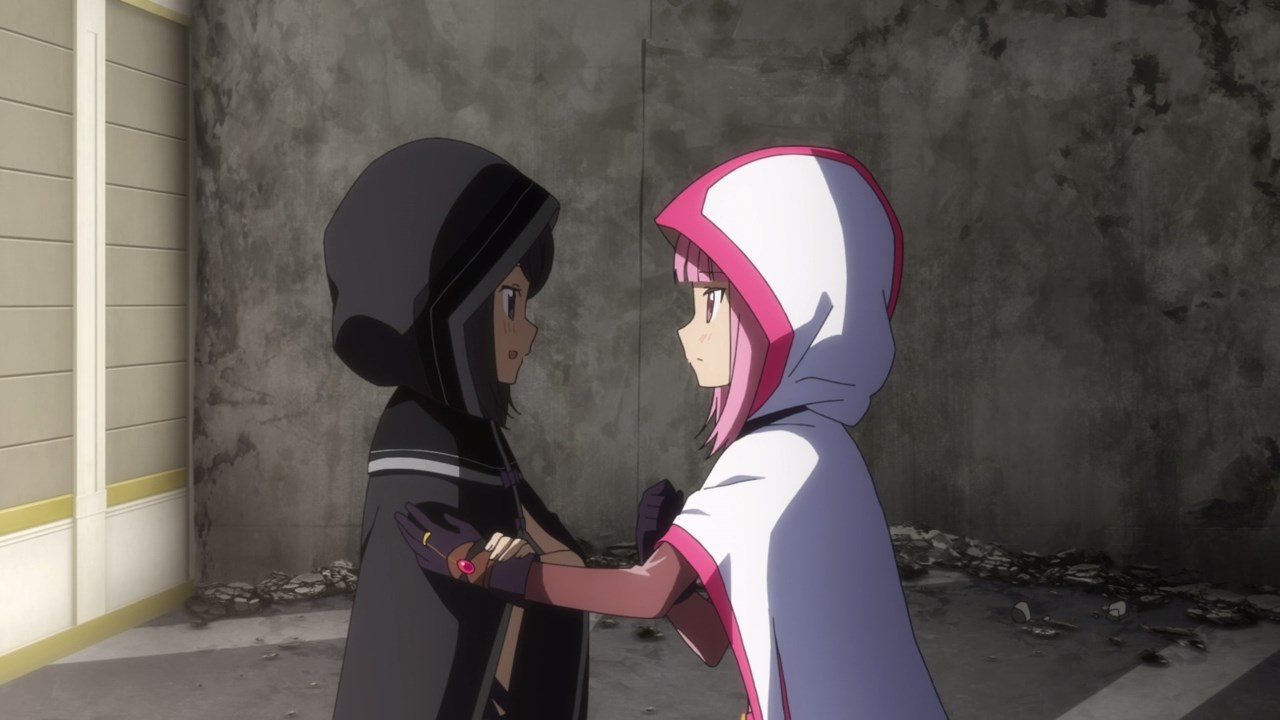 Unfortunately, Kuroe will have to stay as she wants Iroha Tamaki to get to the other side and find the truth by herself. 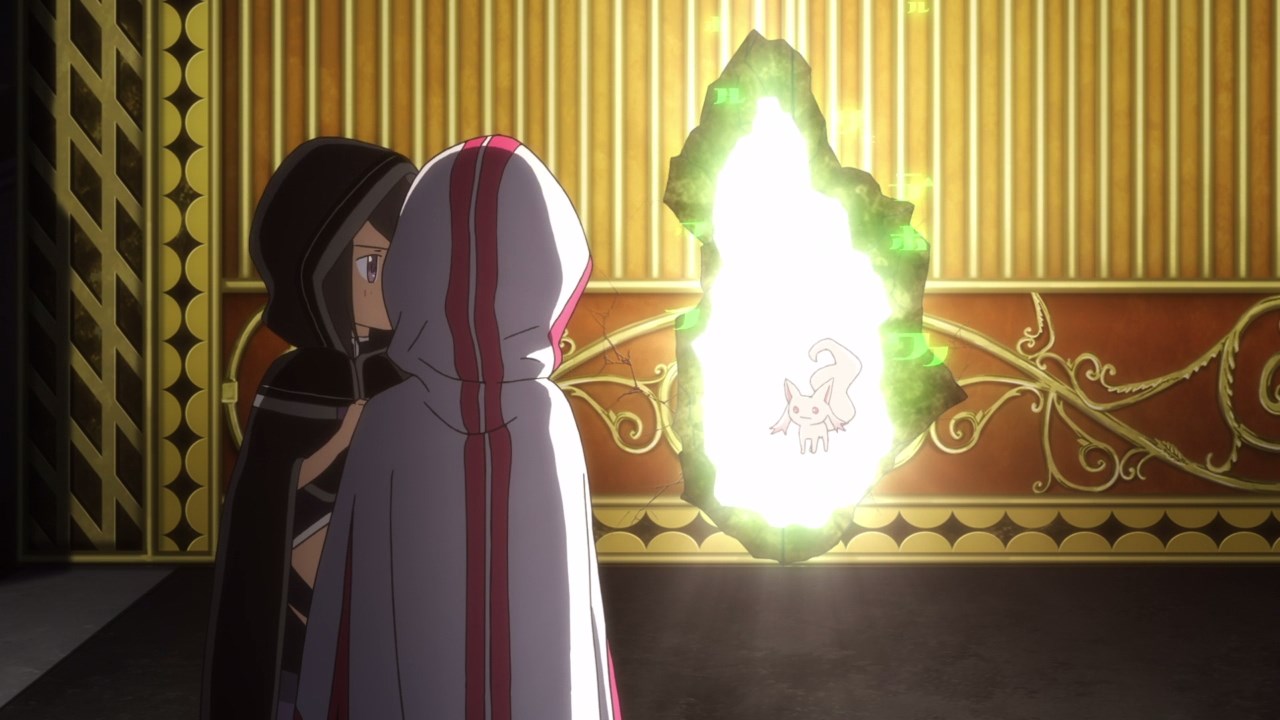 Oh yeah, the door is about to close off as Hotel Faint Hope can repair anything in a jiffy. Looks like Iroha will have to go to the other side on her own along with Lil’ Kyubey. 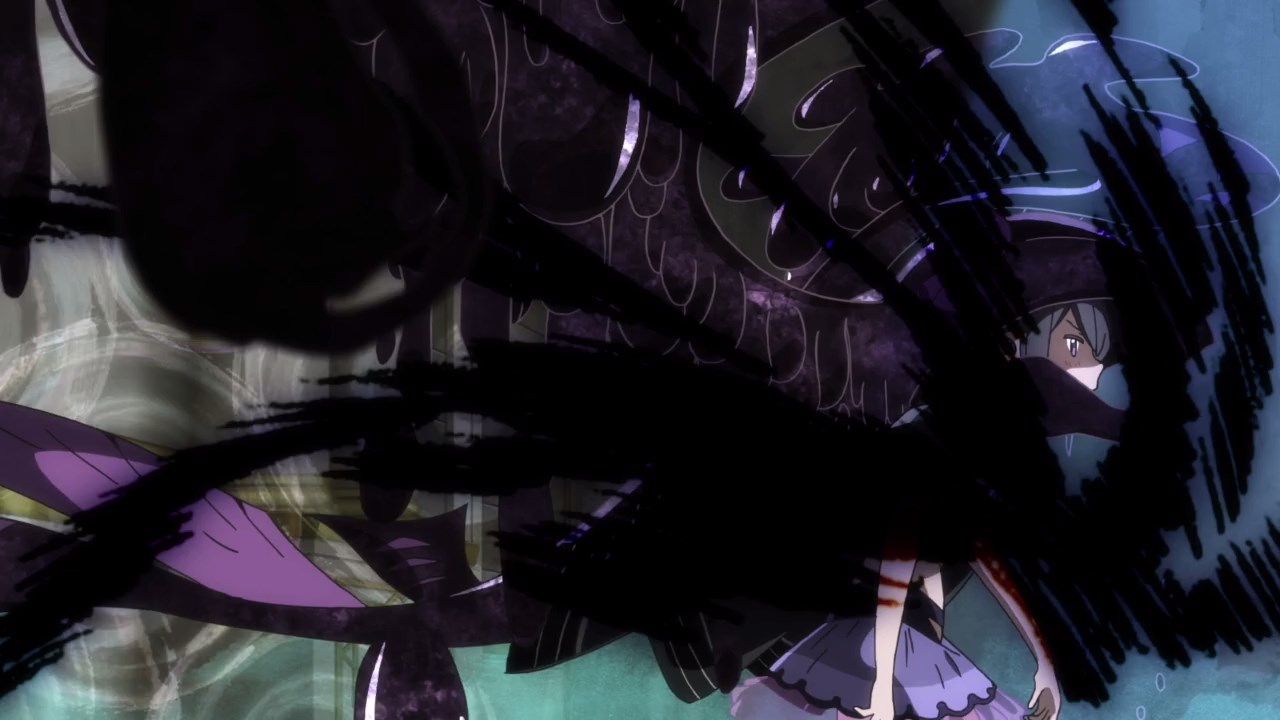 As for Kuroe, she’ll hold the line but not before transforming into her Doppel. Then again, I fear that it’ll be permanent in which Iroha might have to kill Kuroe off.

Anyways, tune in next time where the time of retribution is fast approaching. Of course, if Walpurgisnacht appeared and destroy Embryo Eve, every magical girl will suffer a terrible fate!