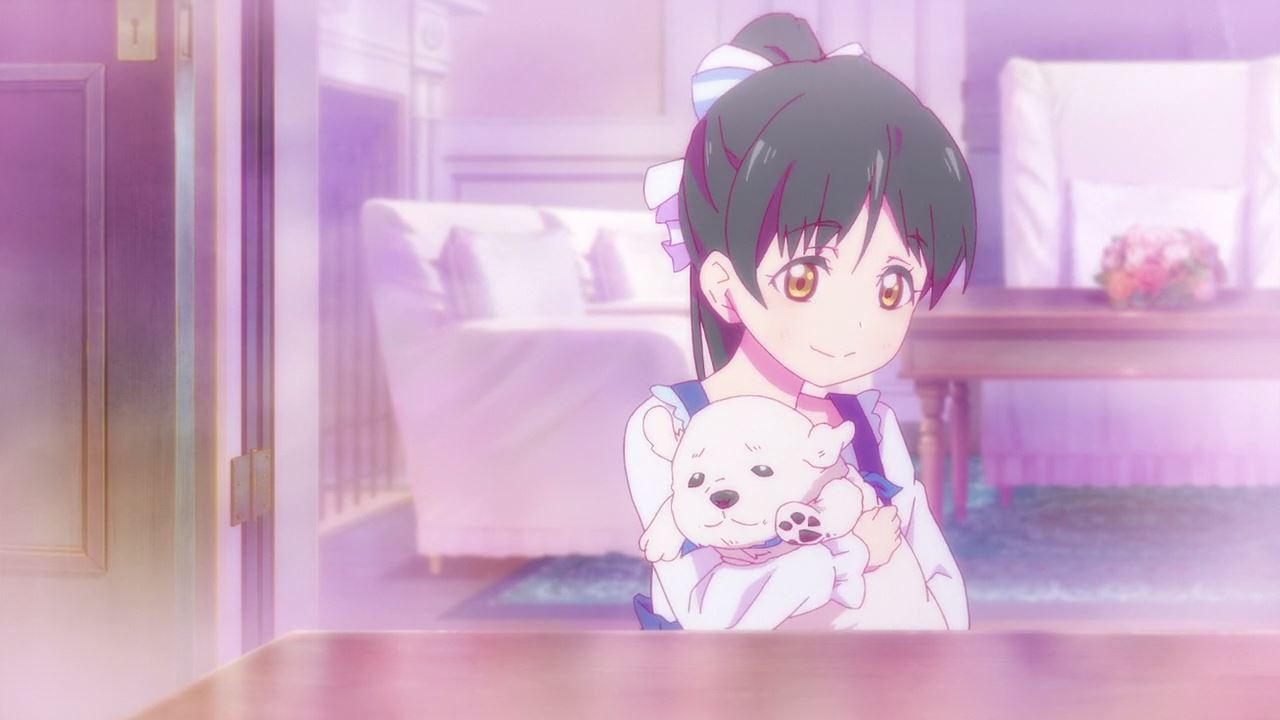 Let’s start this episode with a young Ren Hazuki and all I can say is that she’s really cute as a little girl. 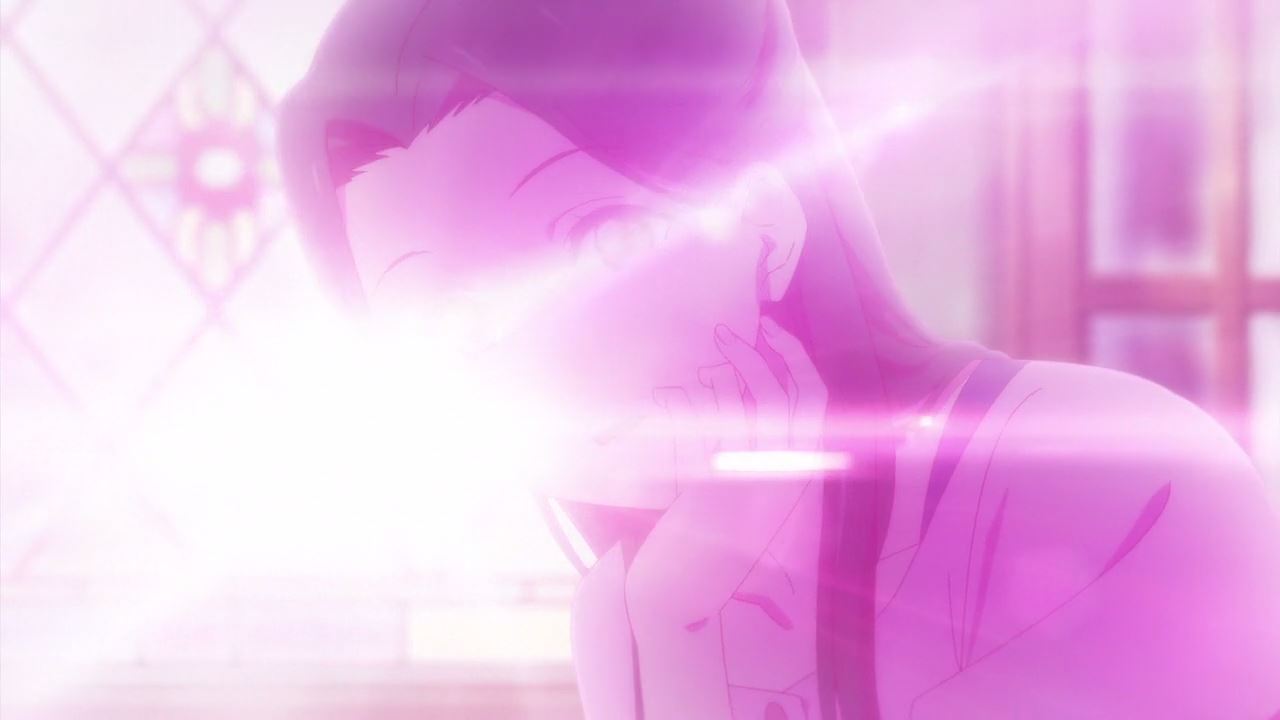 Of course, it appears that Ren’s mother wants to say something to her daughter, but she didn’t say it aloud. I guess I’ll find out later. 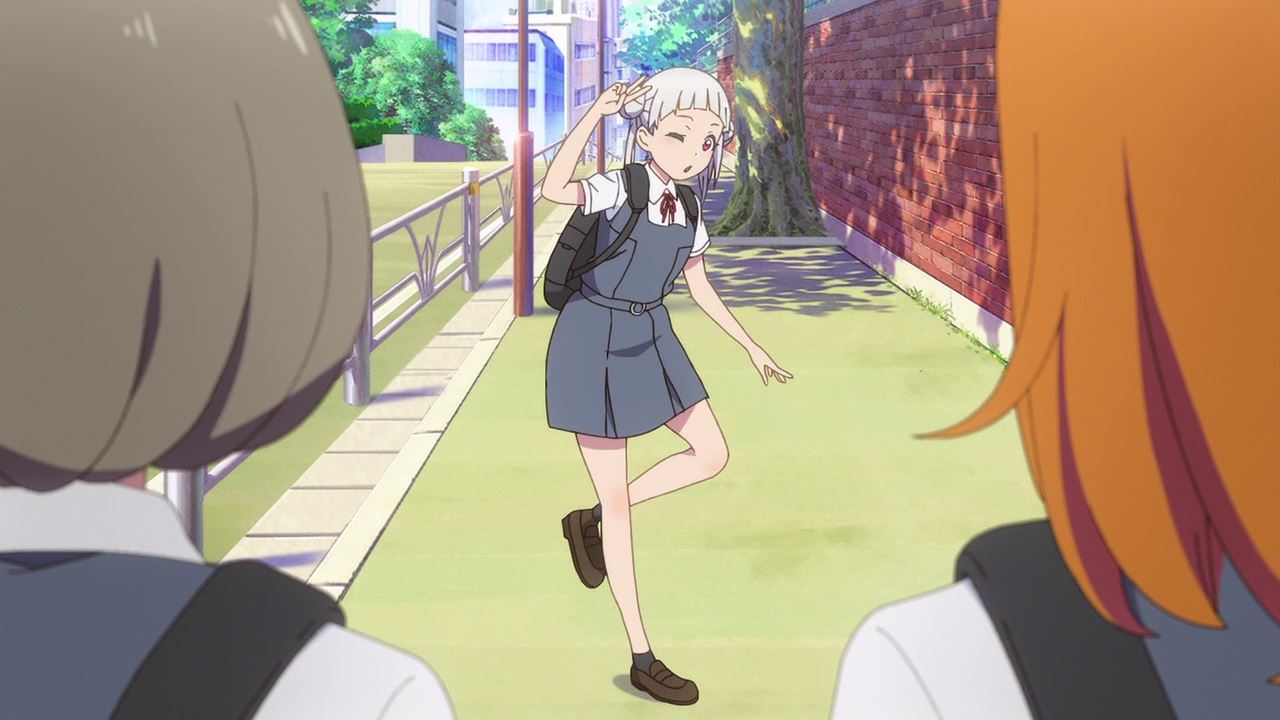 For now, let’s move onto the present where Chisato Arashi moved to the general education course of Yuigaoka Girls’ Academy, meaning that she’ll hang out with Kanon Shibuya and Keke Tang. 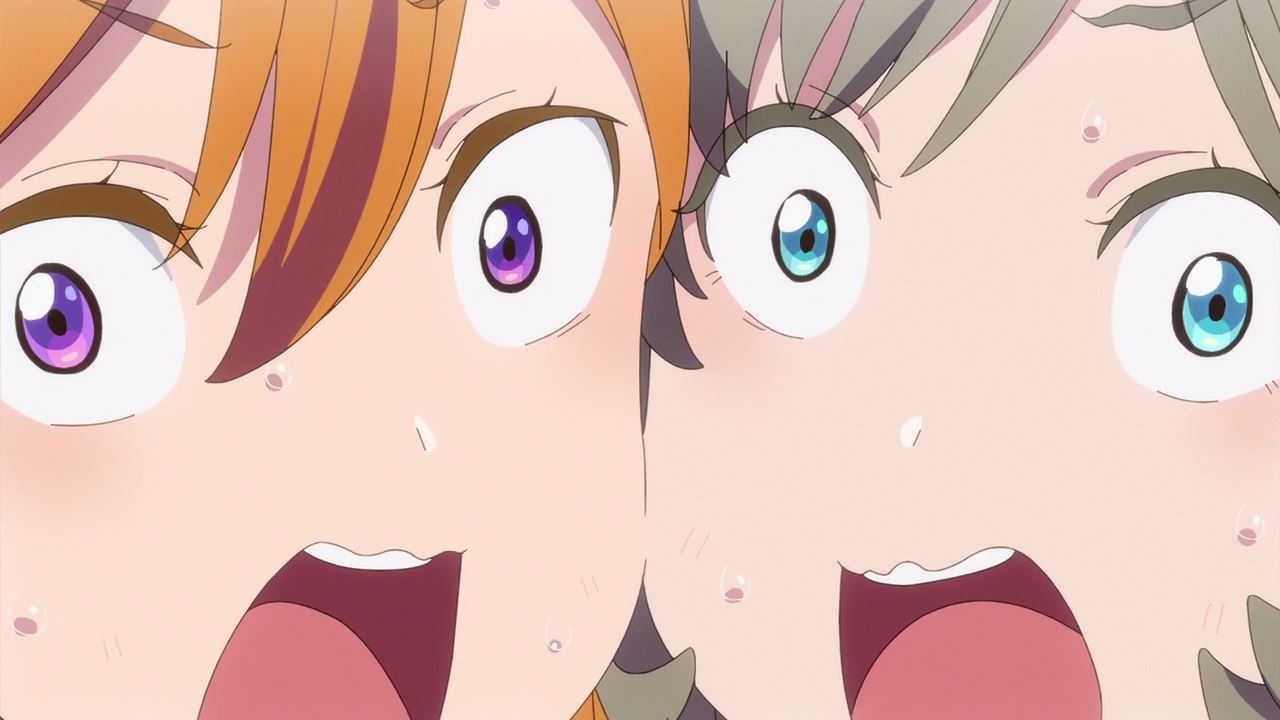 And speaking of Kanon and Keke, they’re really shocked that Chii-chan left the music course in order to focus on her school idol activities. But hey, that’s really nice that the school idol club is growing! 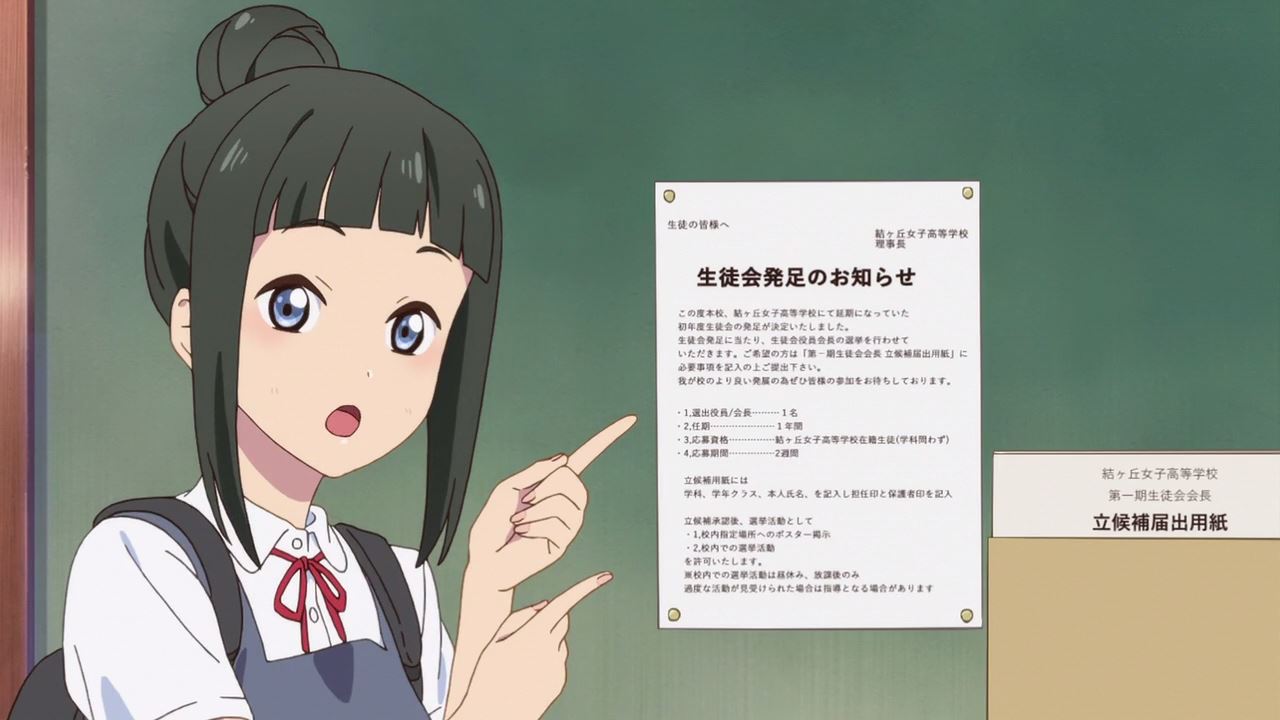 On the other hand, let’s talk about Yuigaoka Girls’ Academy’s student council as it’ll have its first election.

While Ren Hazuki is the clear favorite to win as president, there’s one fringe candidate who’ll challenge Hazuki. 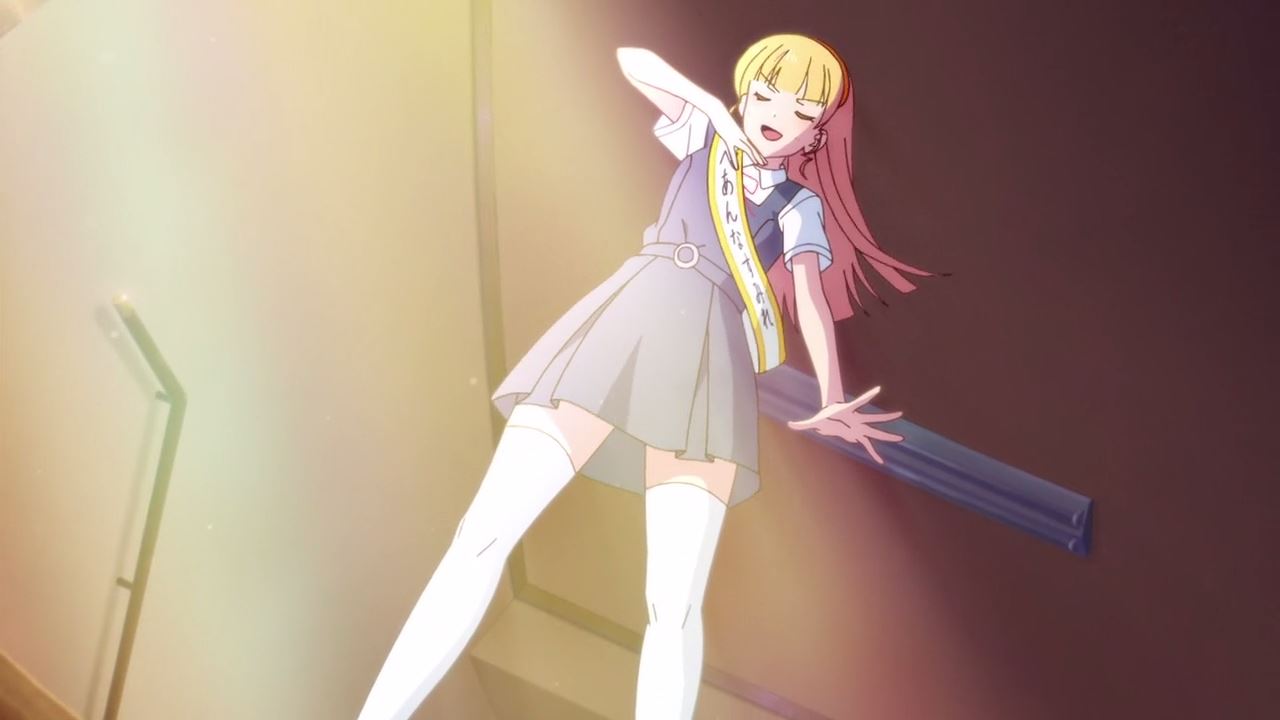 And it’s none other than Sumire Heanna where she’ll become the first student council president in the galaxy. Wait, Sumire-chan for president? Not gonna happen!

Honestly, I would rather have Kanon Shibuya becoming the student council president, but her reason for not taking it is because of her ongoing stage fright. Sure that she’s brave when performing as a school idol, but leading the council is very hard. 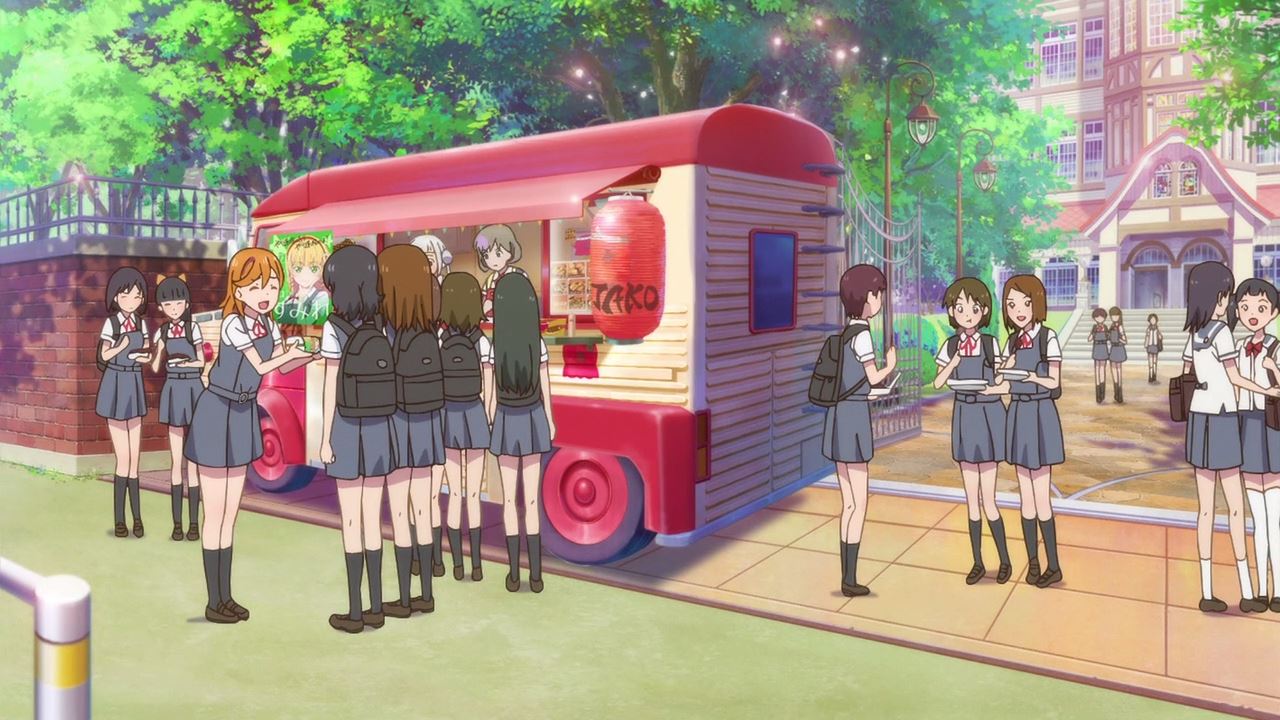 With that said, it’s time for Sumire Heanna to start her presidential campaign by hosting a takoyaki stand in front of the school gate.

Oh yeah, she’s handing out free takoyaki to students so that everyone can vote for her. 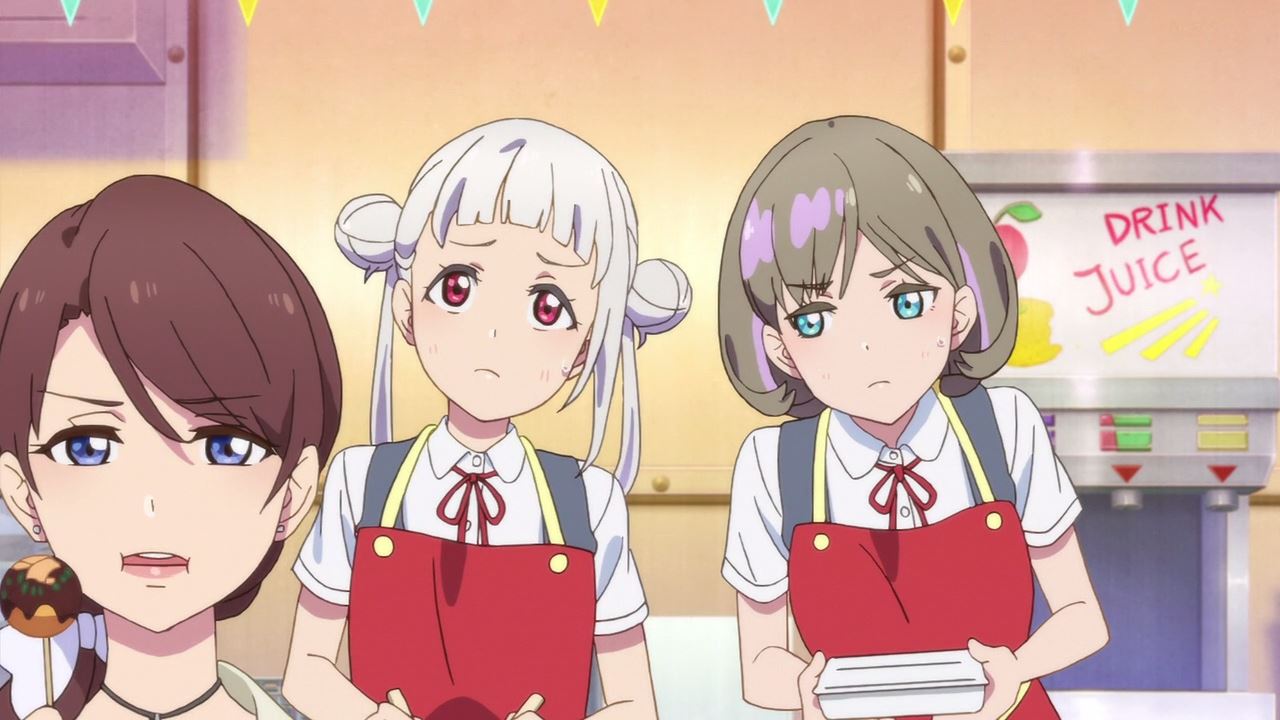 Then again, it’s not gonna work because no one is gonna remember Sumire Heanna anyway despite being plastered in takoyaki boxes. Heck, even the chairwoman said so.

Okay, how come the chairwoman appeared out of nowhere, and is she supposed to support Ren? Still, all I can say is that she’s a mysterious person. 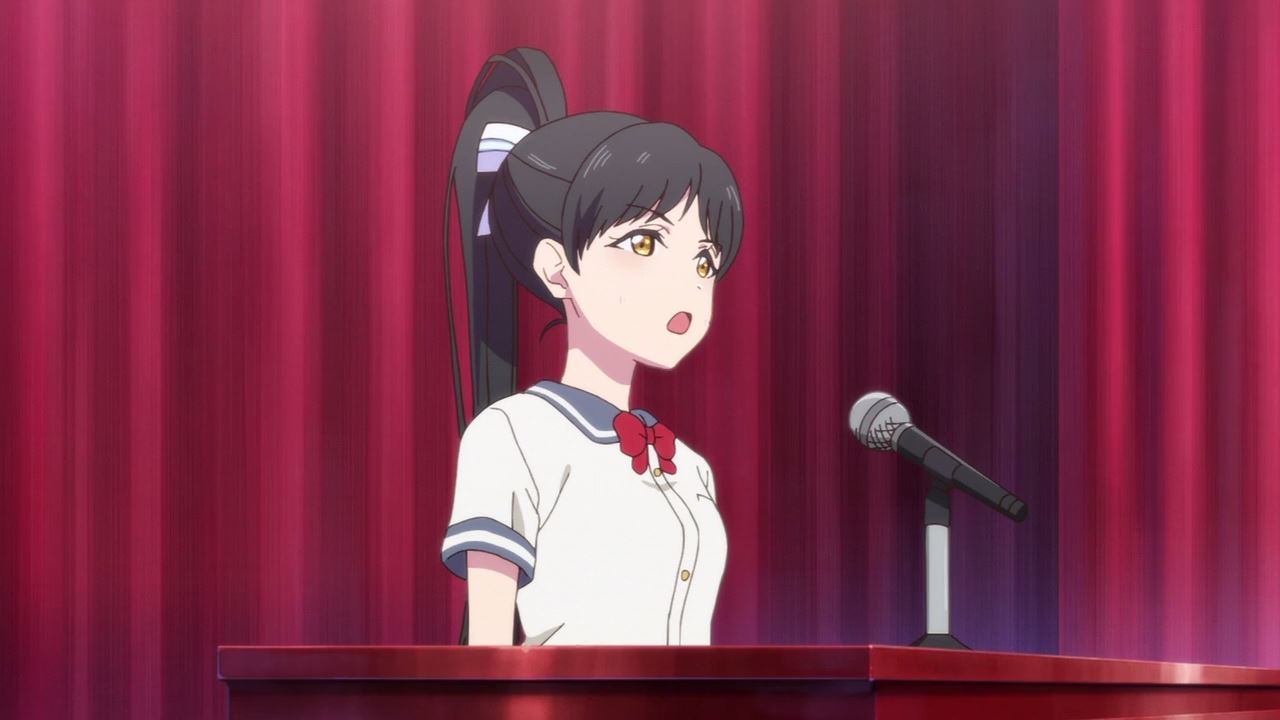 With that said, looks like Ren Hazuki becomes the first student council president where she’ll focus on promoting the music course, leaving the general education course out of the equation.

Okay Ren, I don’t know why you’re focusing your efforts of improving the music course, but leaving the majority which is the general education students is a bad idea! 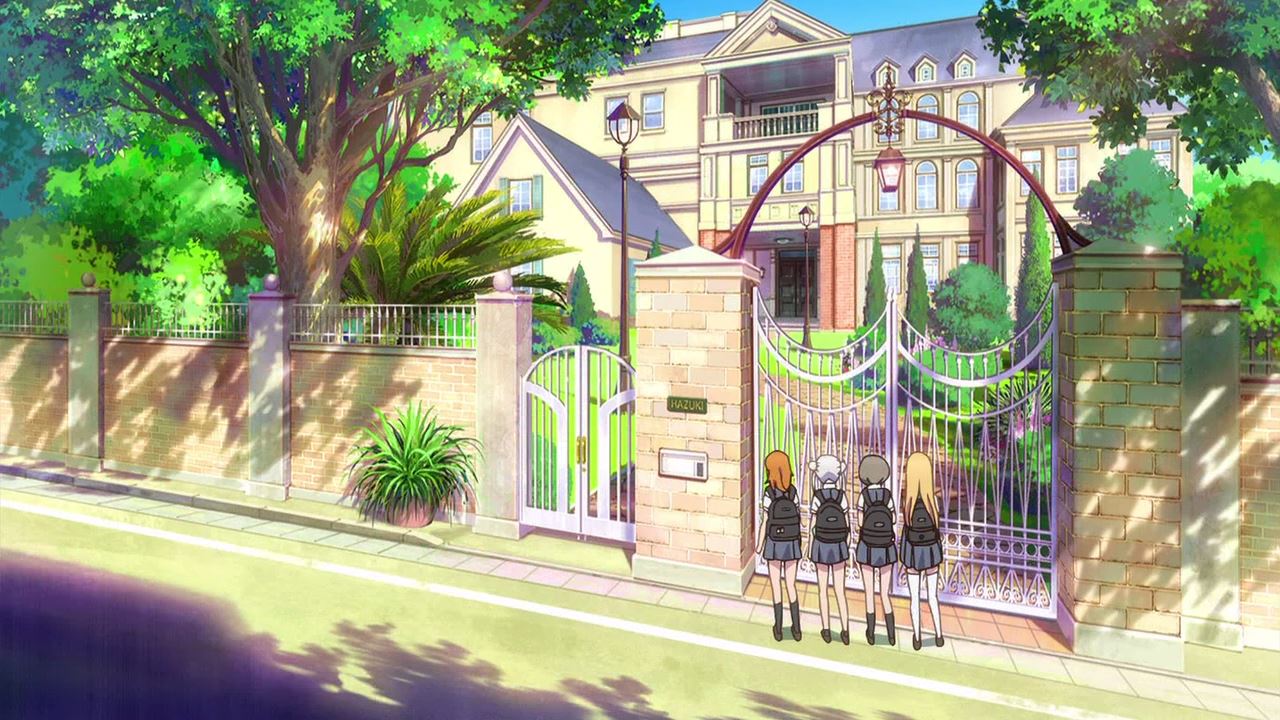 So in order to find out what she’s thinking, Kanon Shibuya and the rest followed Ren Hazuki until they reached this large mansion. Can’t believe that Ren is a rich kid! 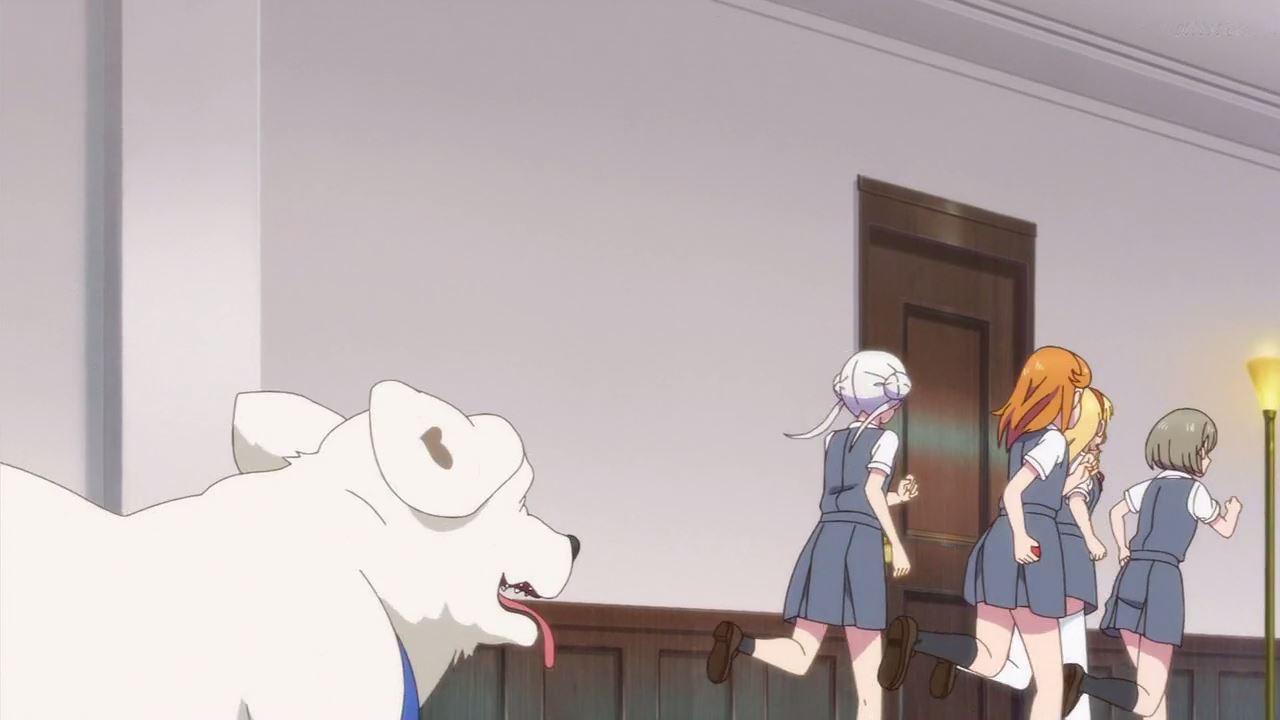 Unfortunately, it appears that Kanon and her friends are being chased by a large labrador named Chibi. That reminds me of Riko Sakurauchi being chased by Shiitake, except that Chibi is chasing all the girls. 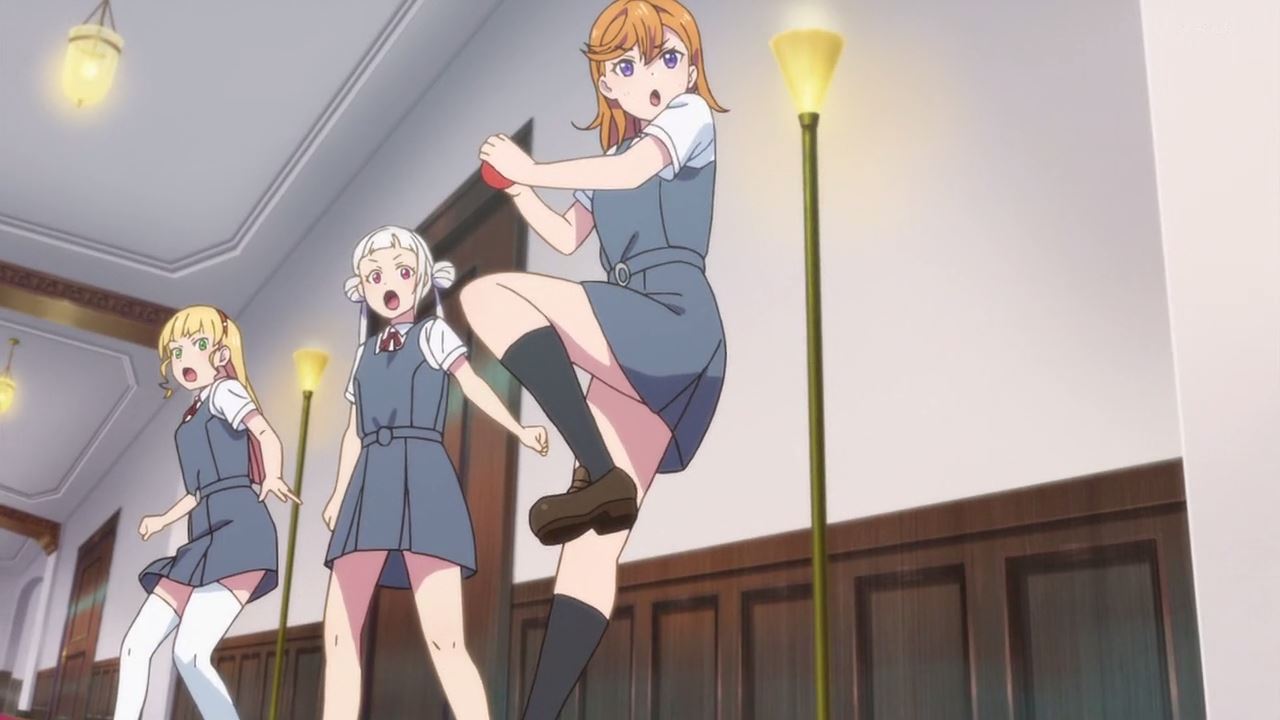 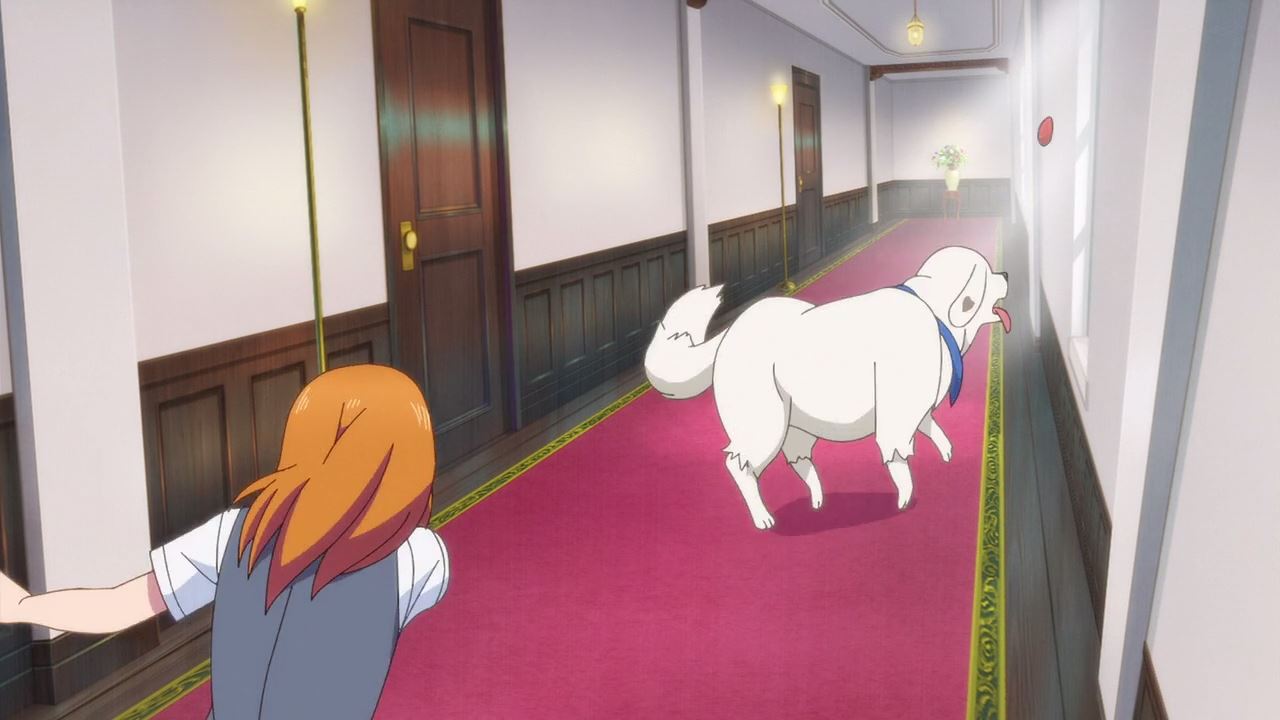 Fortunately, Kanon Shibuya throw a ball in which Chibi chase it away from the girls. Nice pitch there, Kanon-chan! 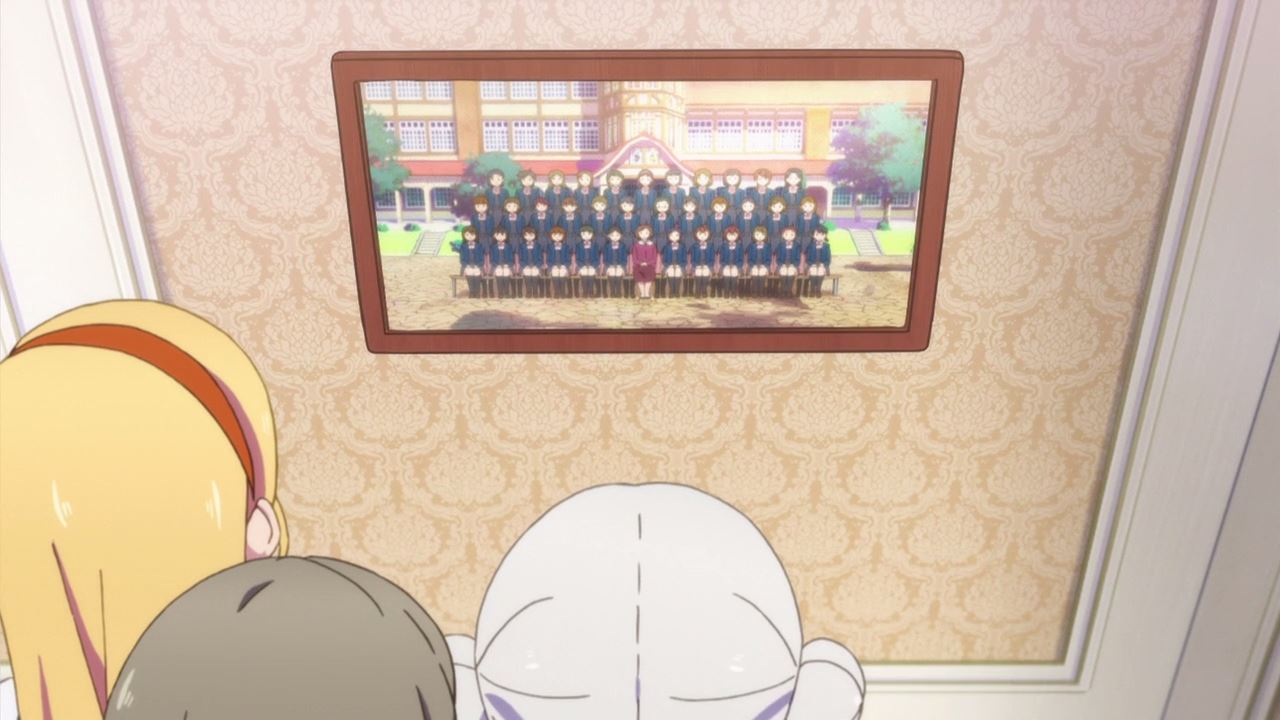 Now then, looks like Kanon and her friends found a graduation photo where the uniform is the same as Yuigaoka’s- Wait a minute, that’s actually Yuigaoka Girls’ Academy!

Come to think of it, seems that Ren’s mother is an alumnus of Yuigaoka, hence she has a connection with that school. 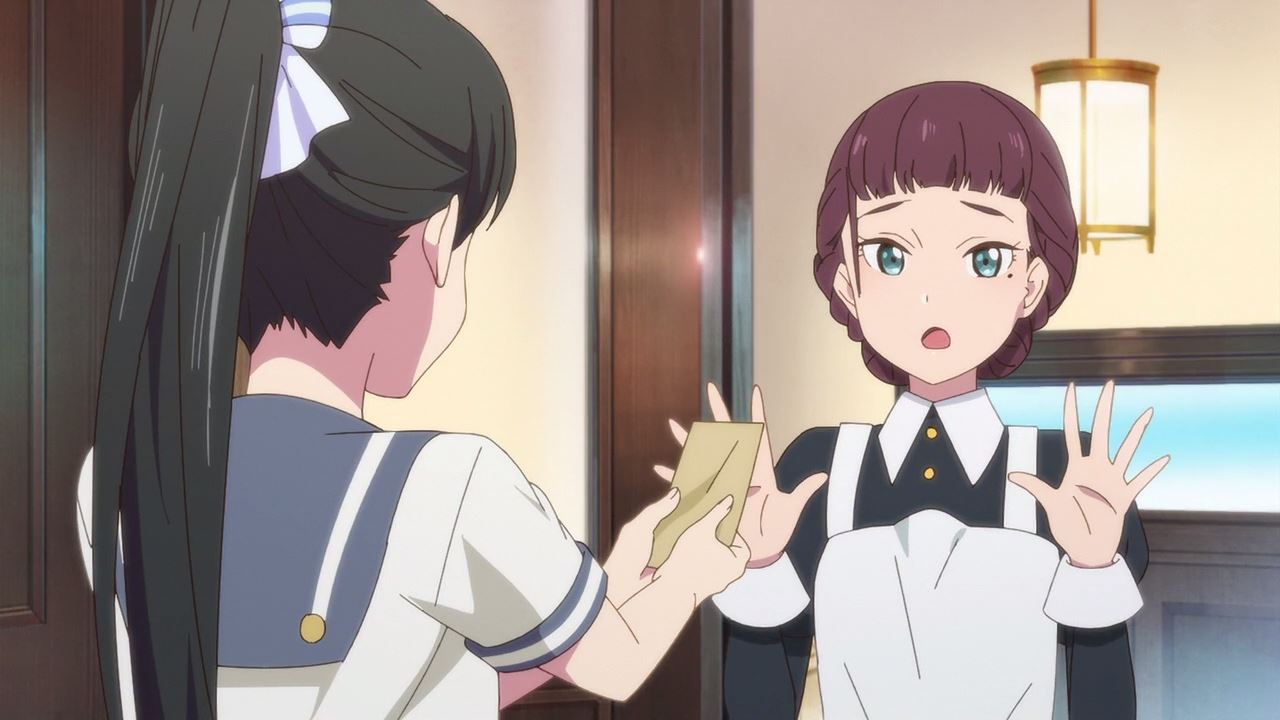 And speaking of Ren Hazuki, looks like she’s giving a severance pay to Saya as Ren wants her maid to enjoy her life after serving for so long.

Okay, what’s going on here? Ren Hazuki is supposed to be a rich kid, right? 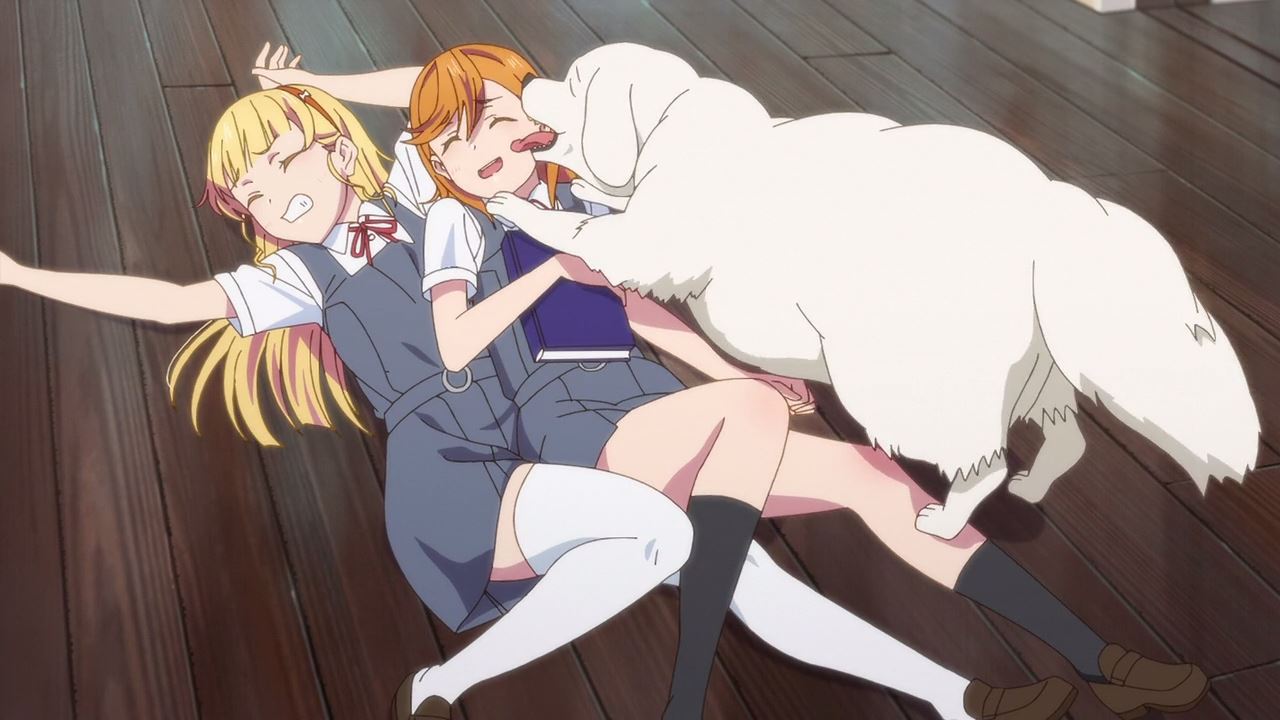 Unfortunately, looks like they got interrupted when Chibi pounces both Kanon and Sumire. Gotta say that Hazuki’s residential dog is getting fond towards these two girls. 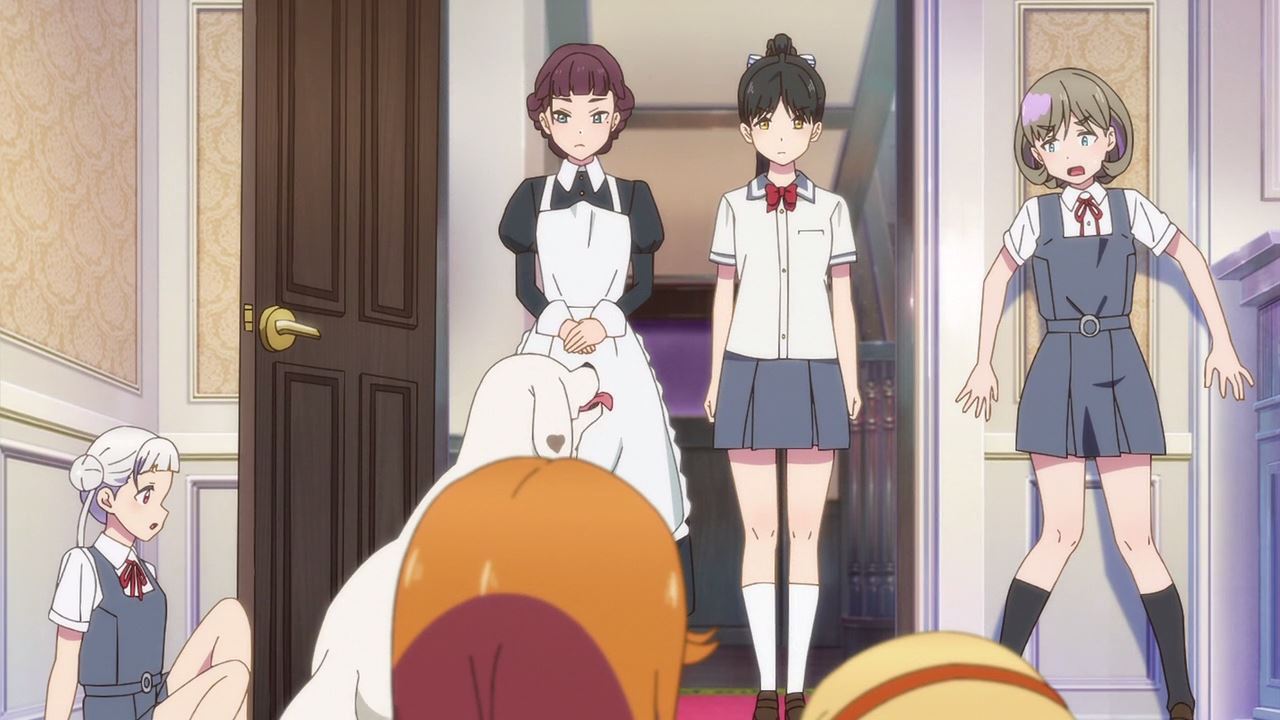 Of course, they don’t want Chibi to misbehave towards those unwanted guests as Saya told Chibi to sit and stay. Gotta love Hana Kanazawa’s English there!

With that said, looks like Kanon Shibuya and the rest of the school idol club got exposed badly thanks to Ren Hazuki’s pet dog. 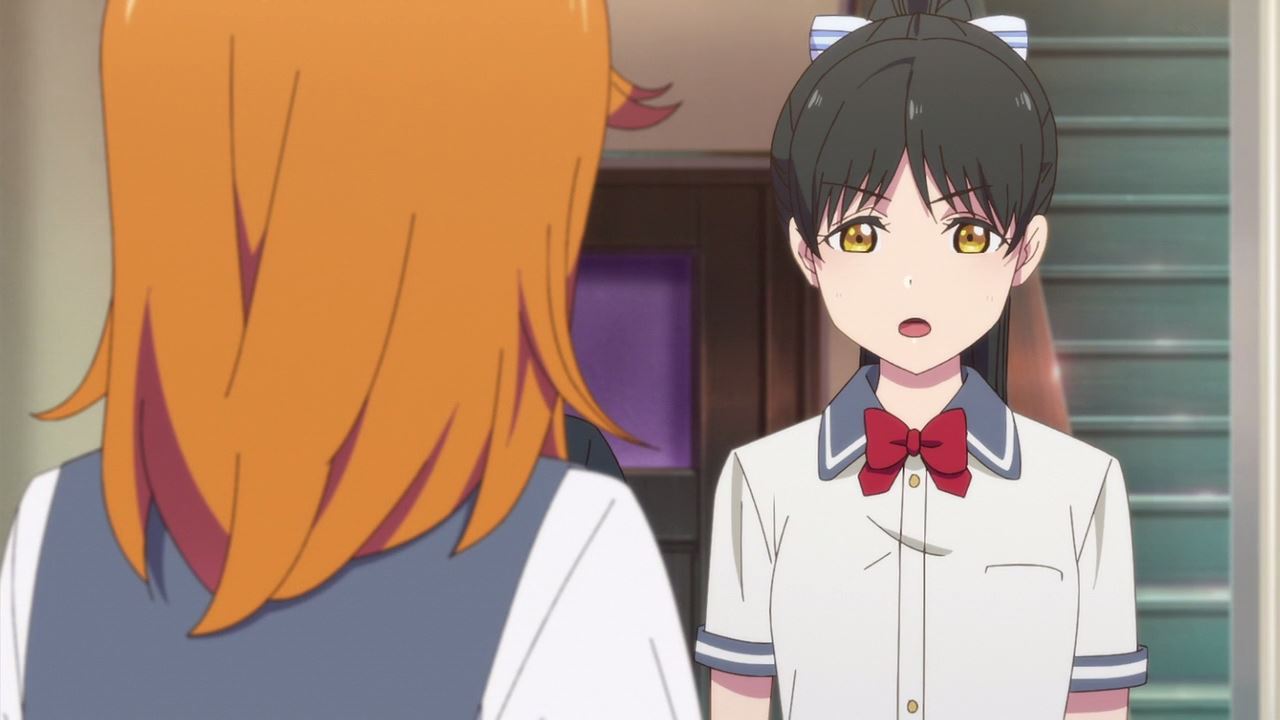 Oh yeah, seems that Ren told Kanon that her family has no more money to keep the school running. Oh boy, looks like we have another case of saving the school from closure.

But seriously though, it’s very unfortunate that Ren Hazuki has some financial problems. Of course, I’m still puzzled on why she doesn’t like school idols. 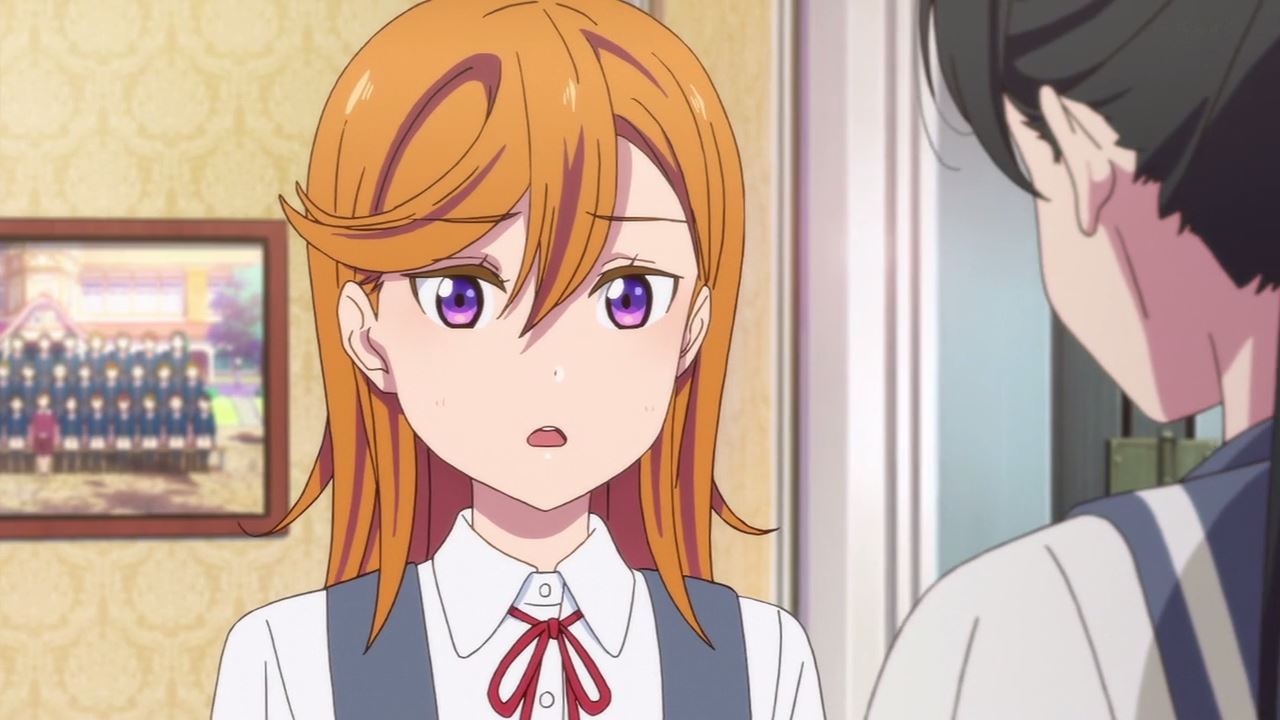 With that said, looks like Yuigaoka Girls’ Academy is doomed to being closed again after a year of reopening. But you know what, the only way to save it is the power of school idols!

Anyways, I’ll see you next time where I’m waiting for Kanon’s response.