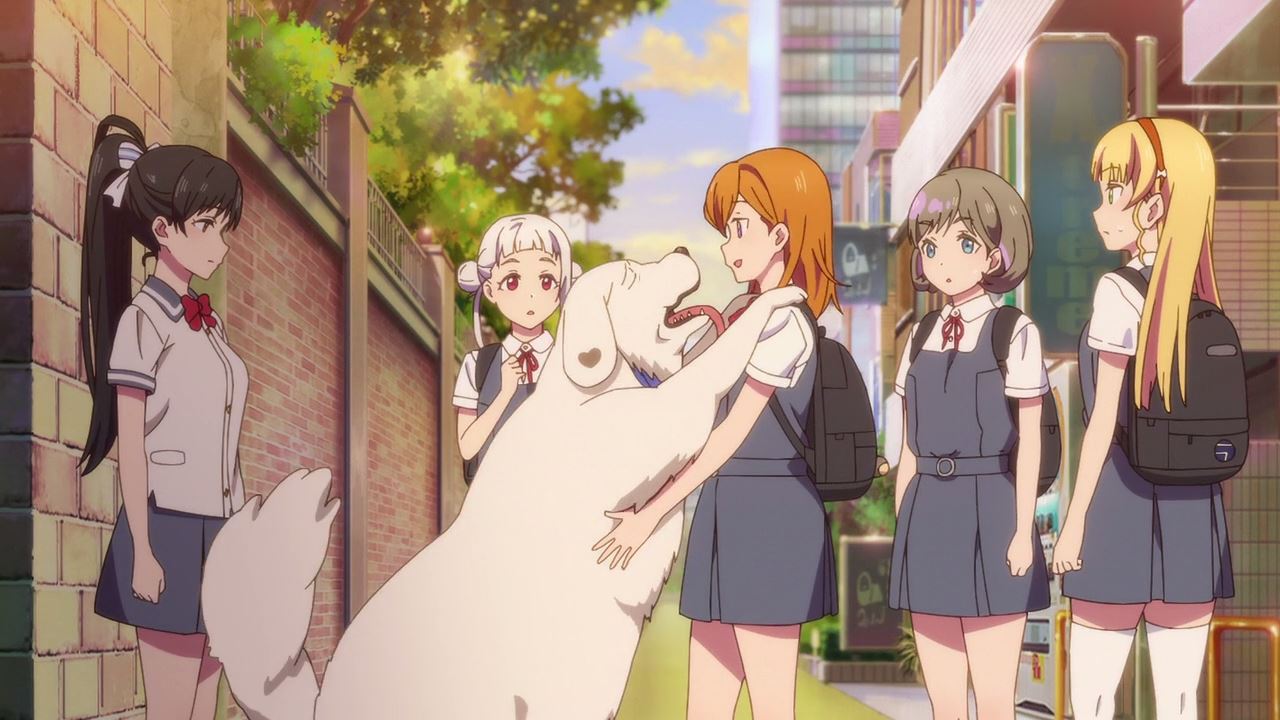 Oh boy, it appears that there’s more complications surrounding Ren Hazuki as not only she doesn’t have money, but Ren’s father wanted her live overseas for which she refuses as Ren would rather stay in Japan and study at Yuigaoka Girls’ Academy.

Speaking of Yuigaoka, it was originally named Jingu Music Academy for which Ren’s mother was an alumni there. Of course, reviving a closed school has its challenges as her father opposed it while her mother took the opening by herself.

Sadly, Ren’s mother passed away 2 years before the start of this show, but I’m still puzzled on why Ren Hazuki doesn’t need school idols in Yuigaoka Girls Academy. 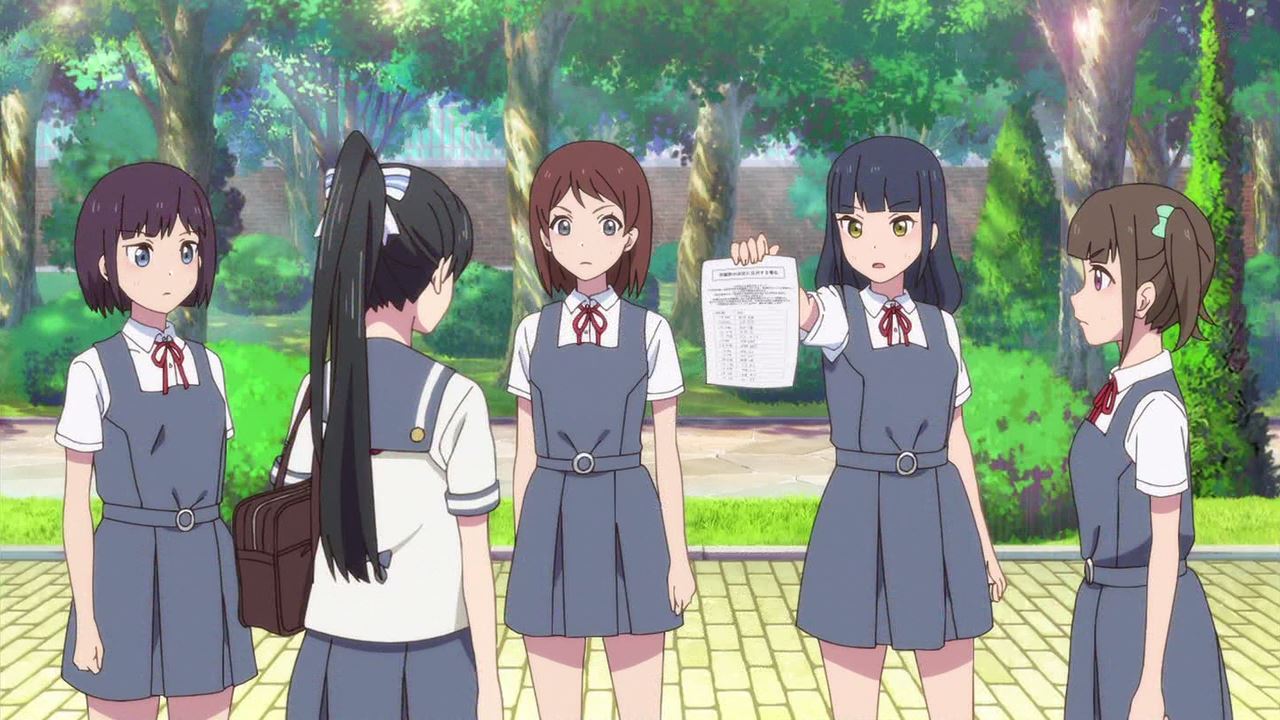 Of course, it gets even worse is that the general education course students demanded their participation in the school festival. This includes the school idol club in which Ren doesn’t want them to participate.

And to add even more pressure, the chairwoman demanded the cancellation of the school festival is the situation didn’t improve. Yeah, it would be better if Ren Hazuki let the general education course participate in the first place. 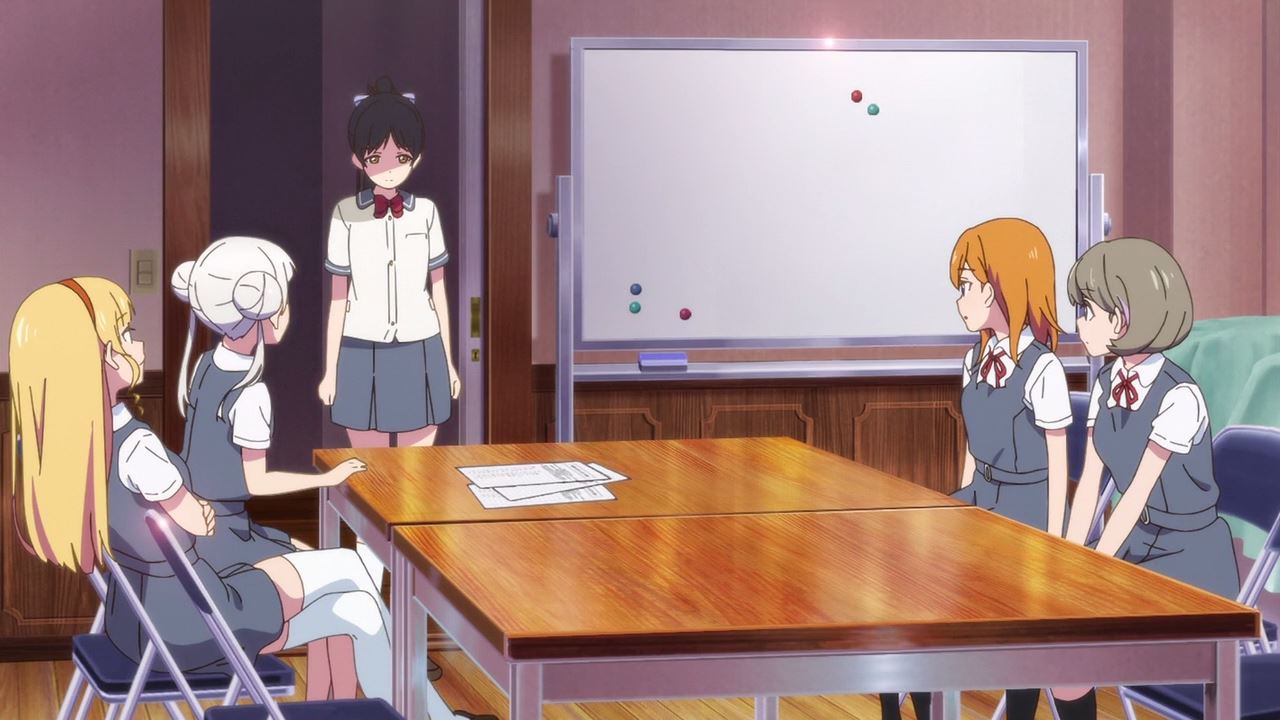 But yes, Ren Hazuki is having a crisis where the risk of cancelling the festival is high, yet she’s still stubborn on not letting the school idol club perform should the general education course participates. Seriously, why Ren hated school idols that much?

Well, turns out that her mother was once a school idol where she tries to save Jingu Music Academy from closure. Unfortunately, it didn’t work out despite her mother’s efforts as Ren feared that she has regrets on being a school idol. Yet, the problem is that there are no records of her mother’s time as a school idol, meaning it might be lost in time.

But come to think of it, why would Jingu or should I say Yuigaoka still has a school idol club room? I think Kanon Shibuya needs to look deeper… 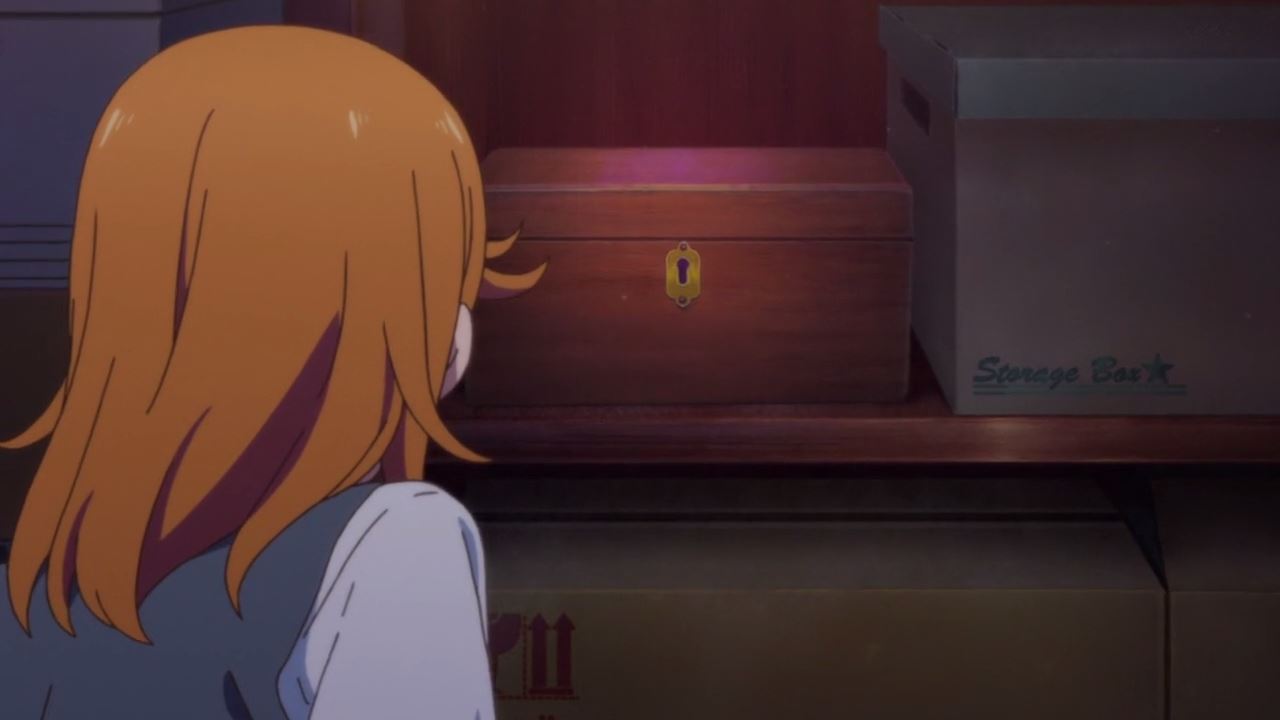 Fortunately, it appears that Kanon found a box that might contain some evidence that there’s a school idol club in Jingu Music Academy. Then again, there’s no way to open the box. 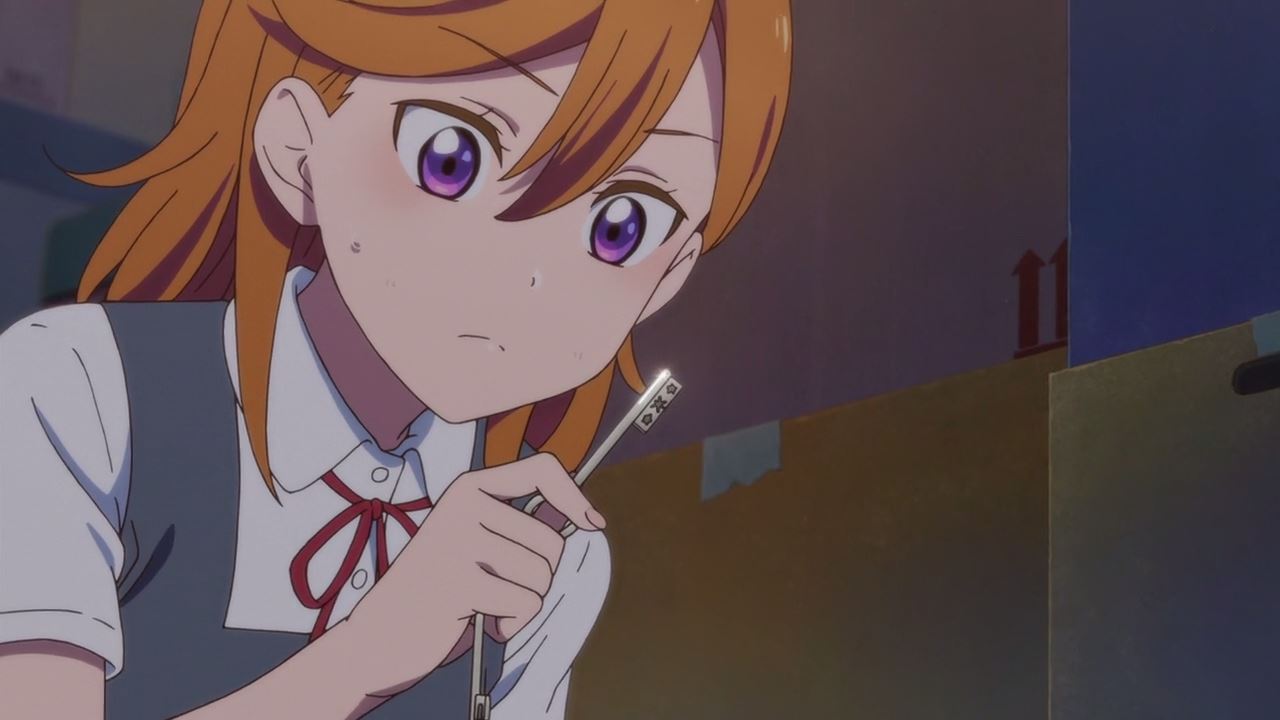 That’s until Shibuya realized that she has another key to open the box. Well then, let’s hope that Kanon can open up the box and show its contents to Ren Hazuki. 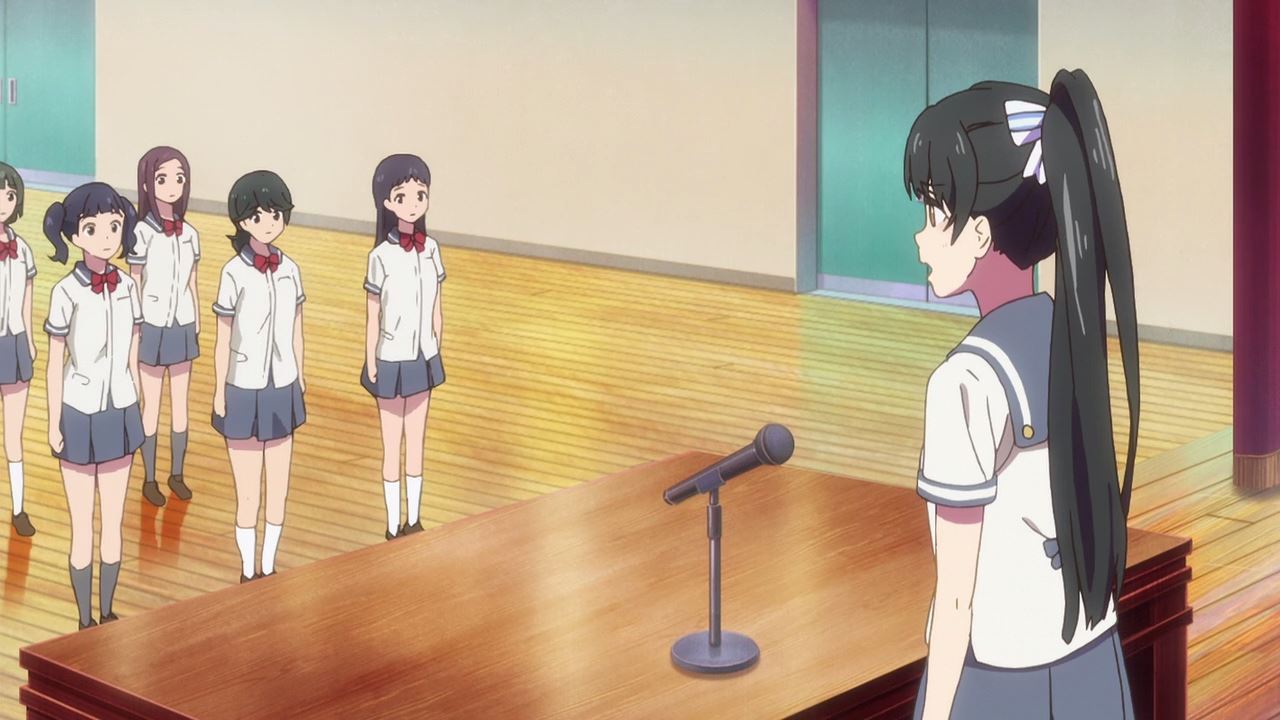 Speaking of Ren Hazuki, looks like she’s explaining to the students regarding the school festival as Ren wants to apologize for the misunderstanding.

Then again, the general education course students are still angry that they’re being left out. Heck, they’re concerned on whether the school idol club will participate or not. 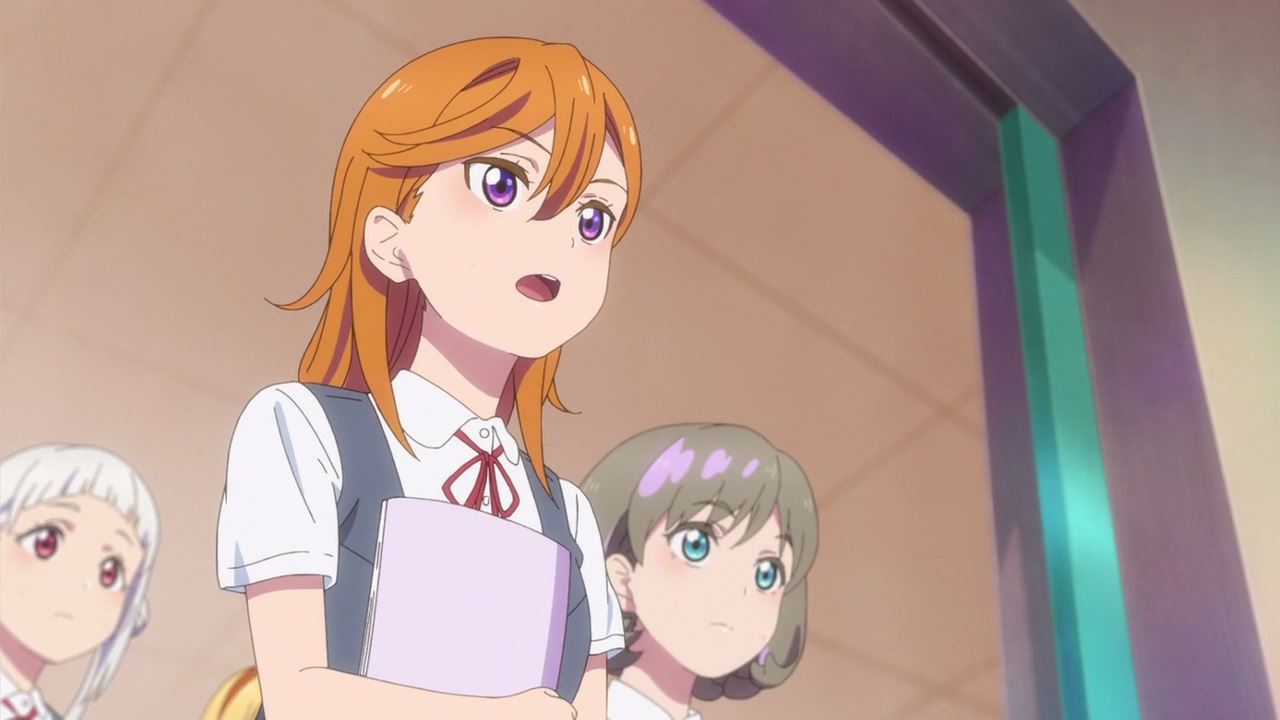 Oh yeah, and regarding the school idol club, here’s Kanon Shibuya and her friends where they finally show some evidence that there was a school idol club back in Jingu Music Academy. 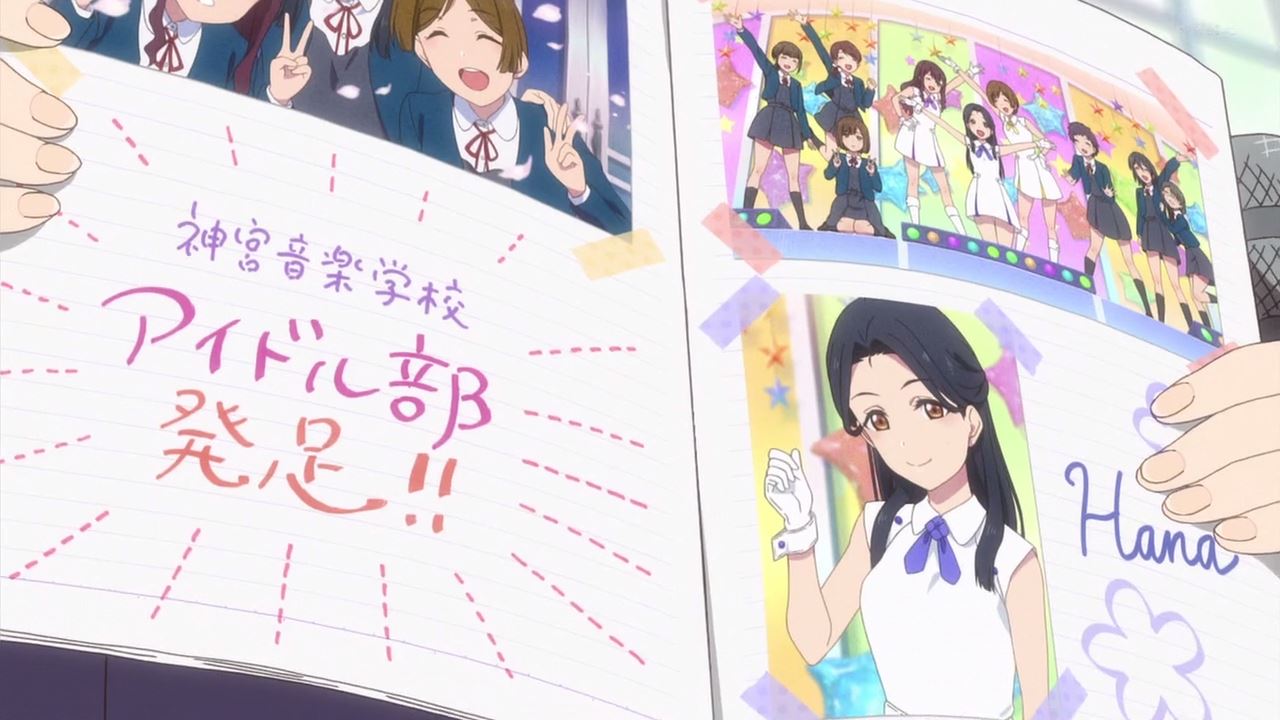 As you can see, it’s full of memories where Ren’s mother Hana had the best time of her life. I mean, there’s no way that she’ll have regrets on being a school idol. 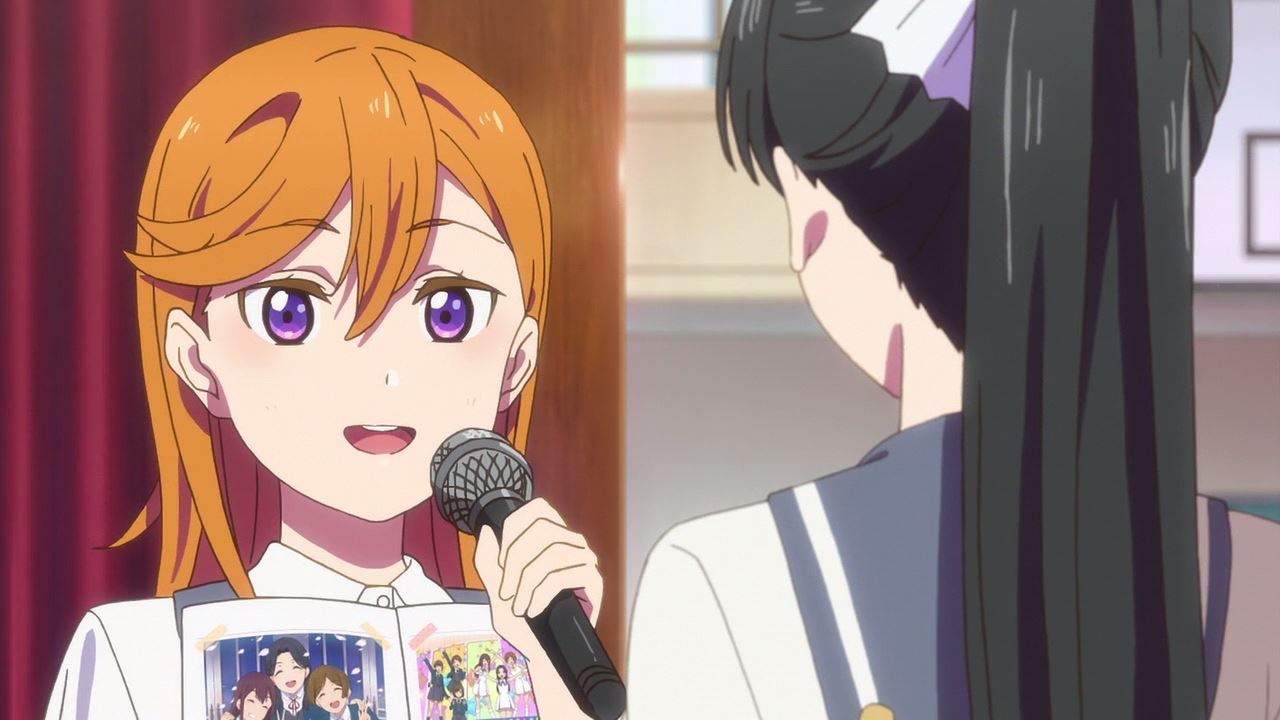 Oh yeah, Kanon explained that there’s a message where despite not saving their school in the first place, Hana Hazuki wanted to bring everyone closer together with the power of music.

So when Ren’s mother decided to revive her former alma mater into Yuigaoka Girls’ Academy, she wants to make sure that someone will follow her legacy. Fortunately, her wishes has been granted as Kanon-chan and the rest became the successors to Jingu Music Academy’s school idol club. 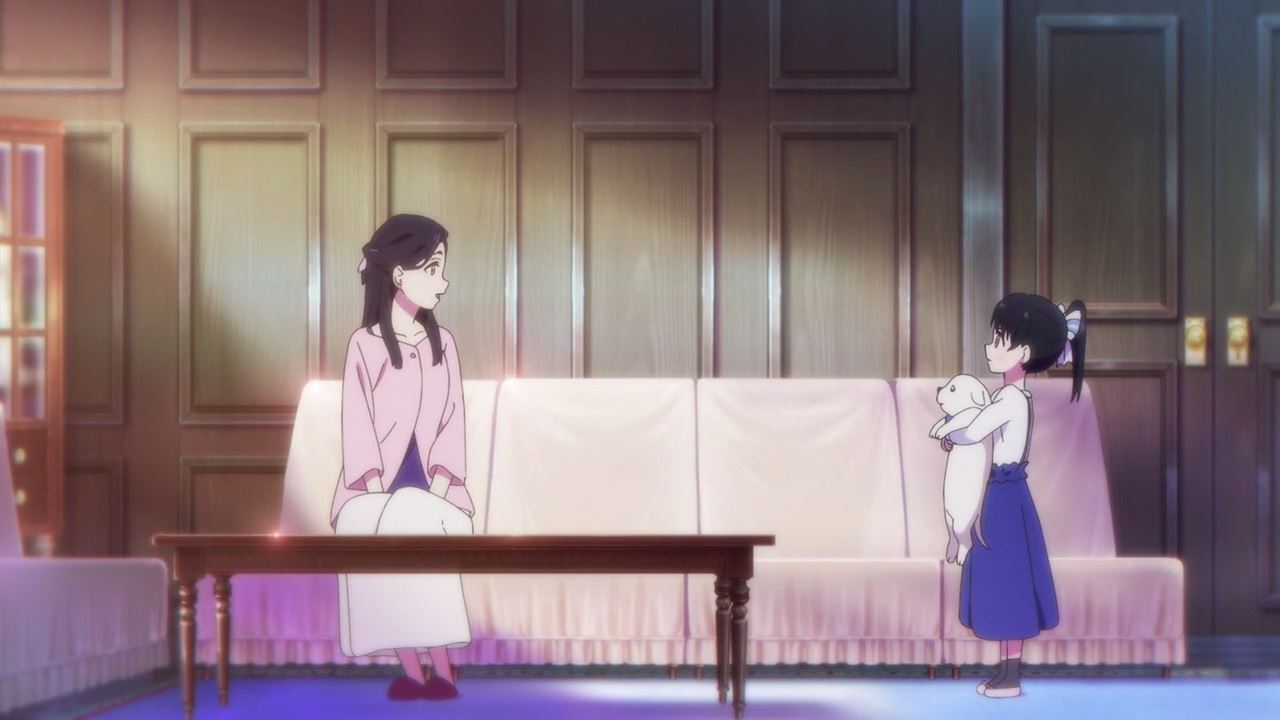 Oh yeah, remember the time Ren’s mother said to her daughter? Turns out that Hana had a great time as a school idol. Honestly, I love how her mother enjoyed her school idol life despite her circumstances at that time. 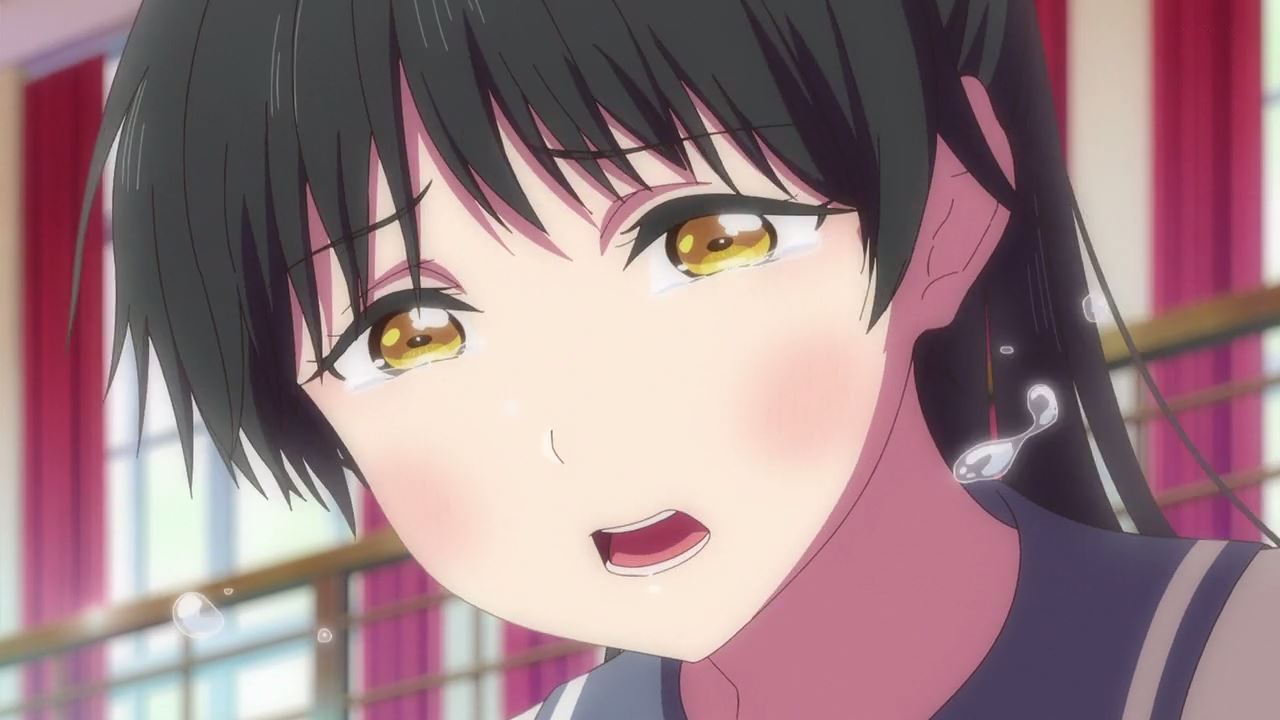 But as for Ren Hazuki, looks like she realized her mistakes and decided to turn on a new leaf. But you know what, Kanon-chan and the rest are here for her. 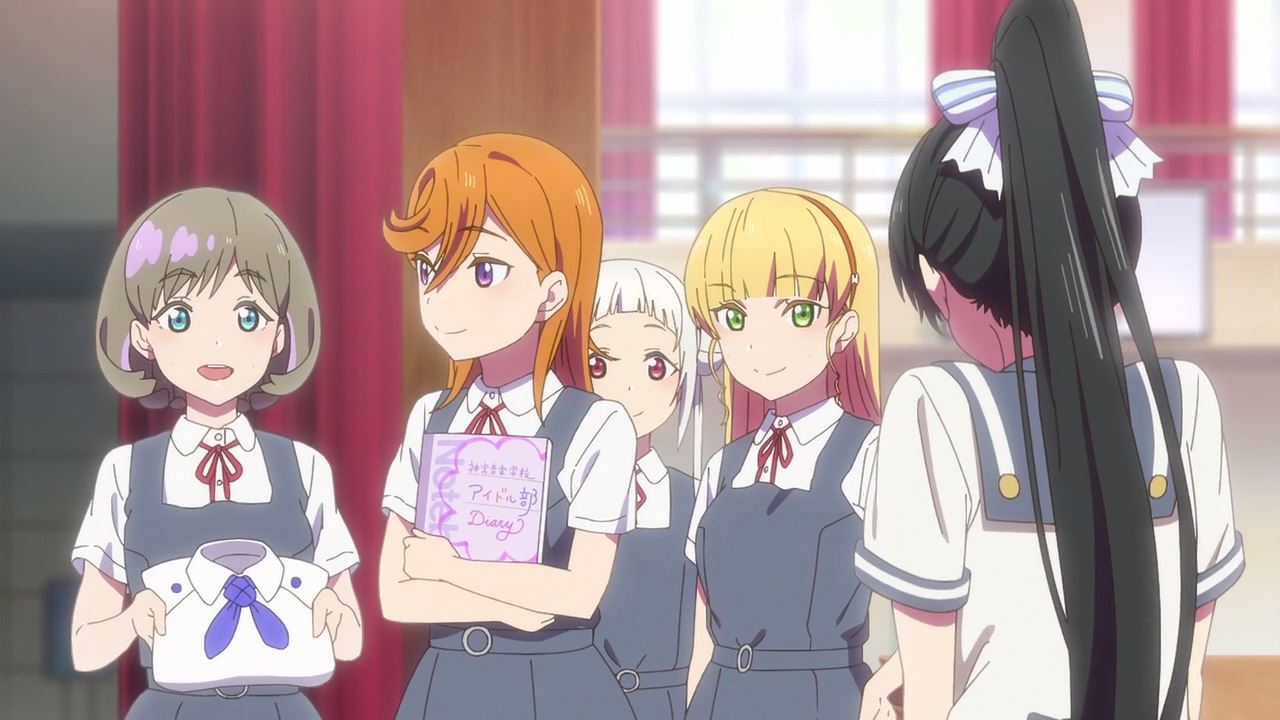 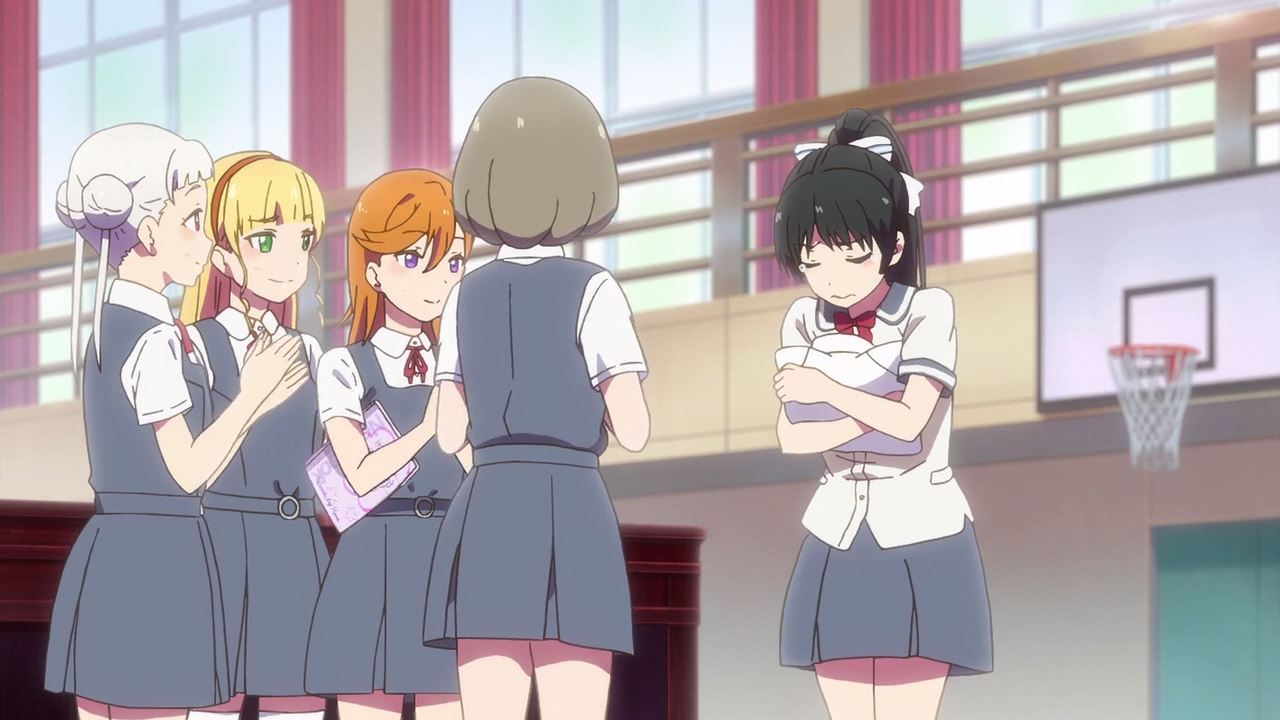 And so, Ren Hazuki has finally joined the school idol club after opposing it for so long. Come to think of it, I wonder why that box is kept for a long time instead of being thrown away when Ren’s mother bought the school? 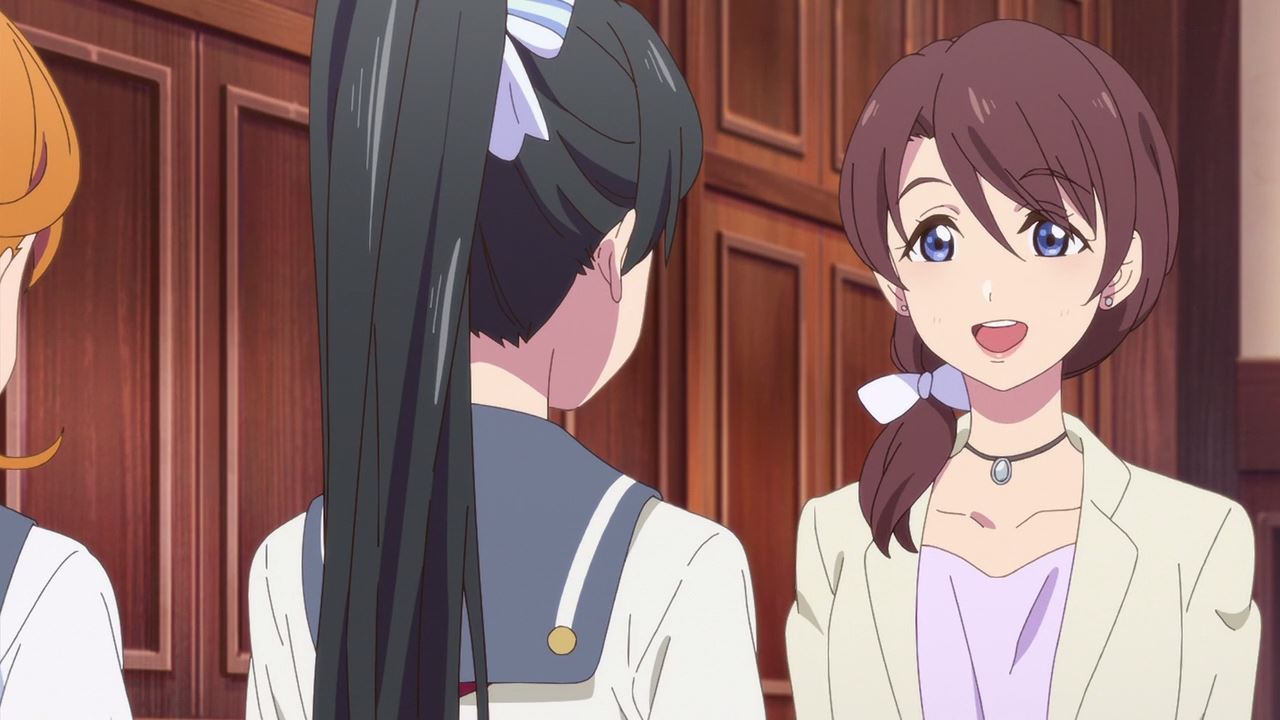 Well, turns out that the current chairwoman of Yuigaoka Girls’ Academy kept it a secret for so long until there’s a time that a successor to Jingu’s school idol club has appeared. Well, it already happened thanks to Kanon Shibuya and her friends. 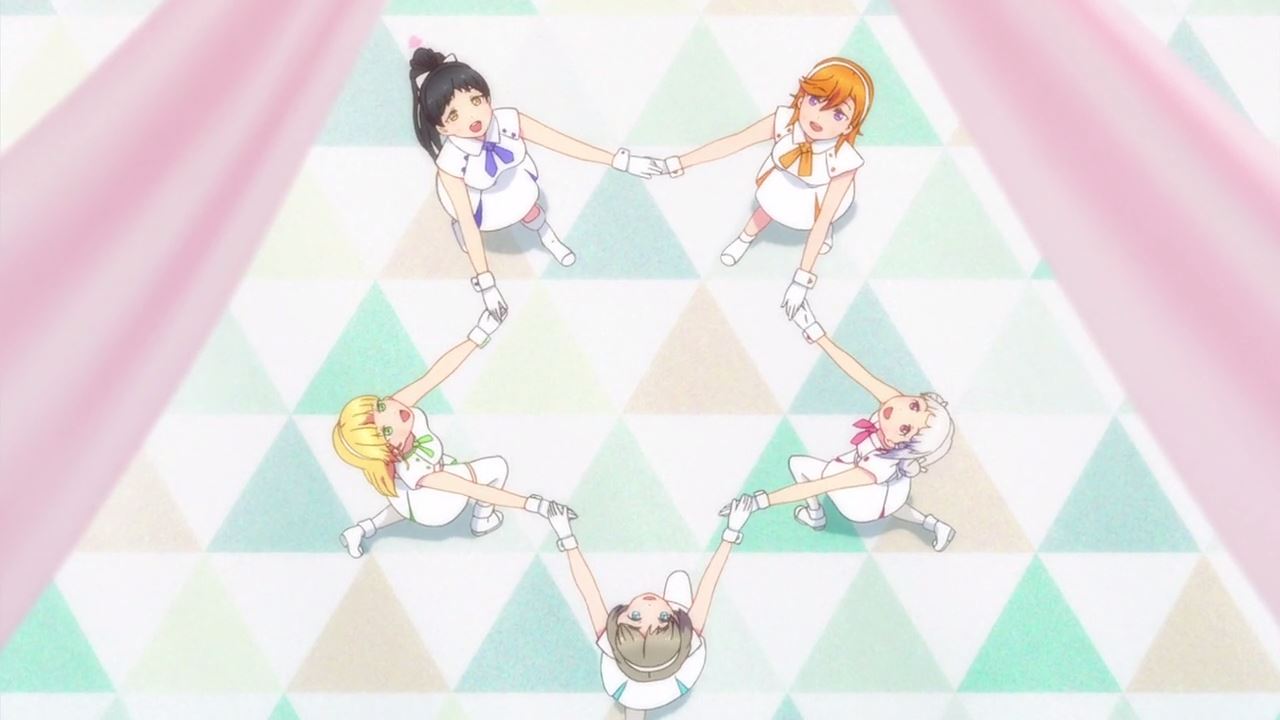 Now then, let’s end this episode where all 5 members of Yuigaoka Girls’ Academy’s school idol club performed “Wish Song” during the school festival.

And by the way, seems that both the general education and music course have worked together to build the greatest school festival in Yuigaoka. Of course, I’m hoping that they’ll attract more students, especially when Ren is the center of this performance. 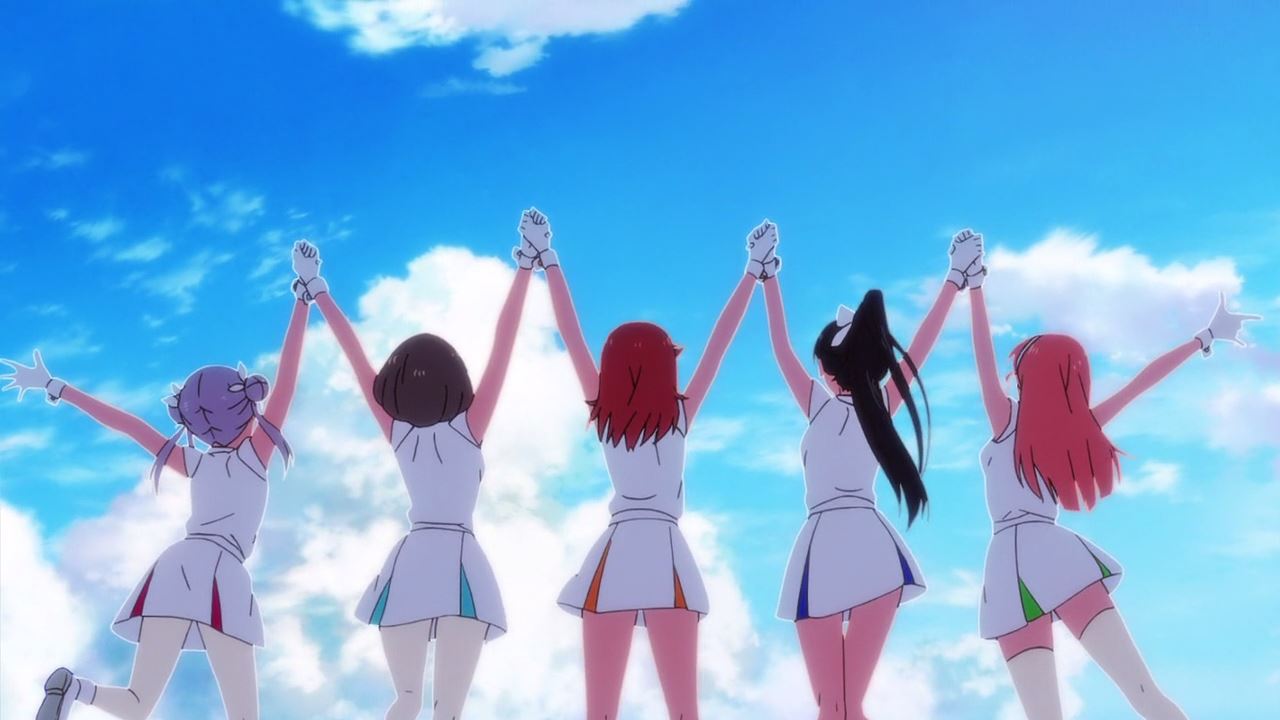 But yeah, I really enjoyed this episode as it not only showed all 5 members performing together, but I really love Ren Hazuki’s character development.

Of course, what they need is a name for the school idol group and it’ll happen on the next episode!