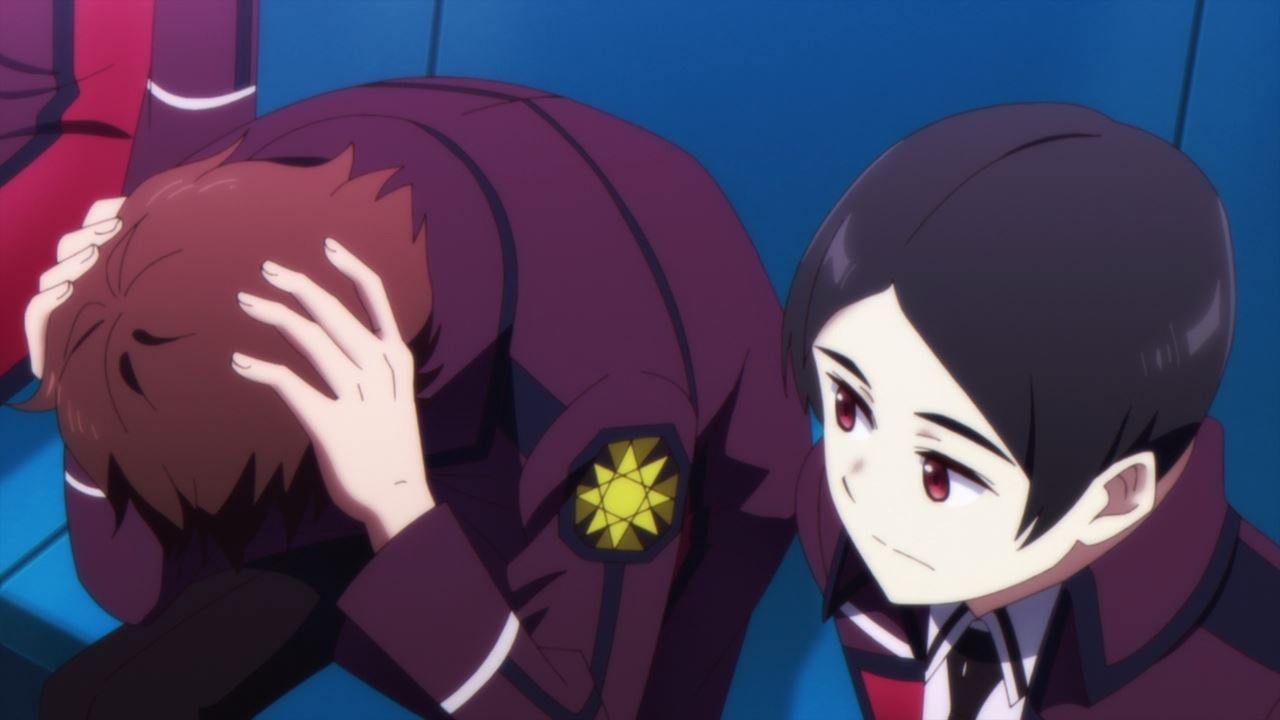 Well everyone, here’s the last day of the Nine Schools Competition where one event shall determine the overall winner for the entire tournament. 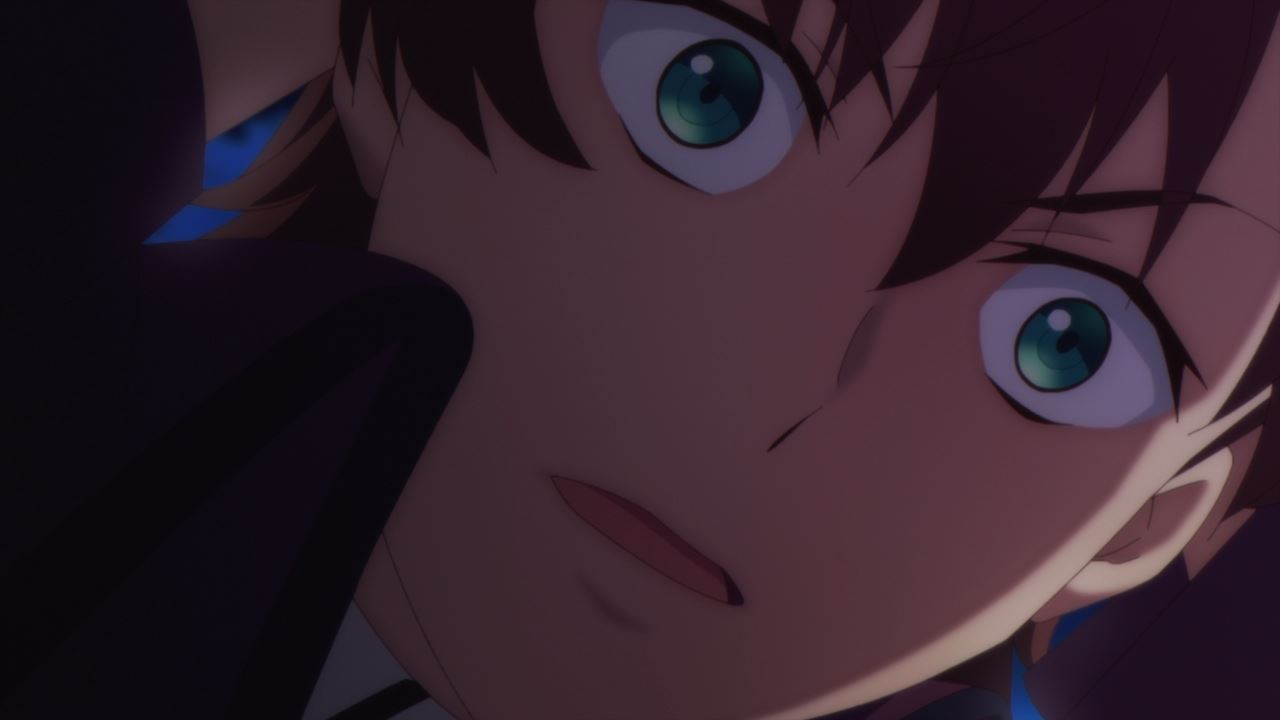 For Masaki Ichijou, he’s getting paranoid that the Crimson Prince wants Airi Isshiki to win the Mirage Bat event. Then again, I think he should get a hold of himself first! 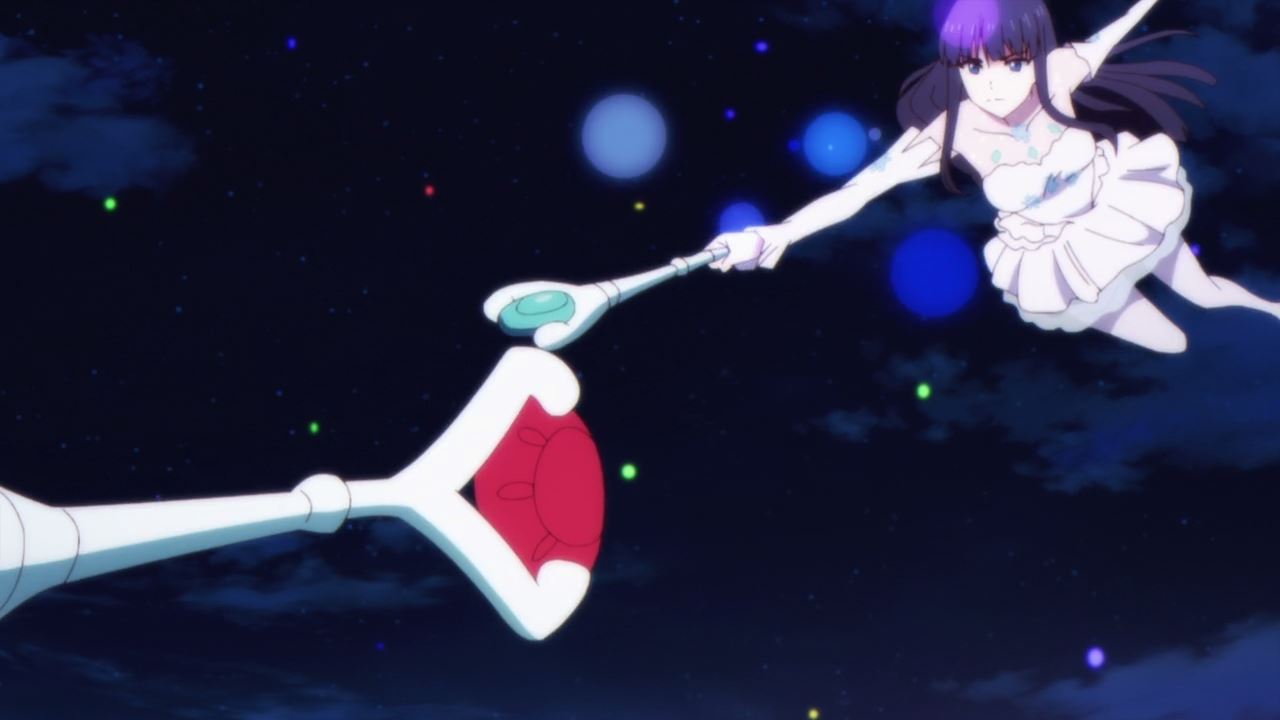 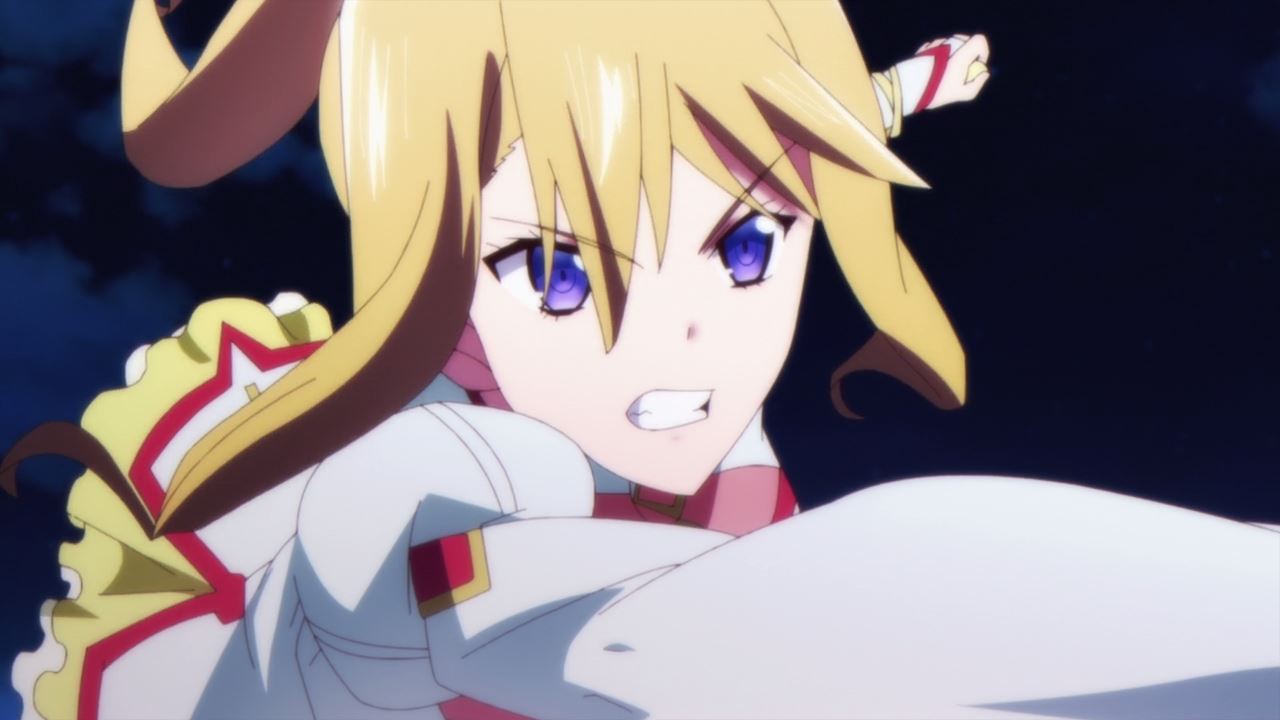 Now then, let’s move onto the Mirage Bat finals where it’s basically a duel between Airi Isshiki and Miyuki Shiba. C’mon, that’s the most important part of the event as the rest are just spectators.

By the way, the competitors are using Tatsuya’s flying magic, meaning that Miyuki won’t be the only one who’s using that kind of magic. 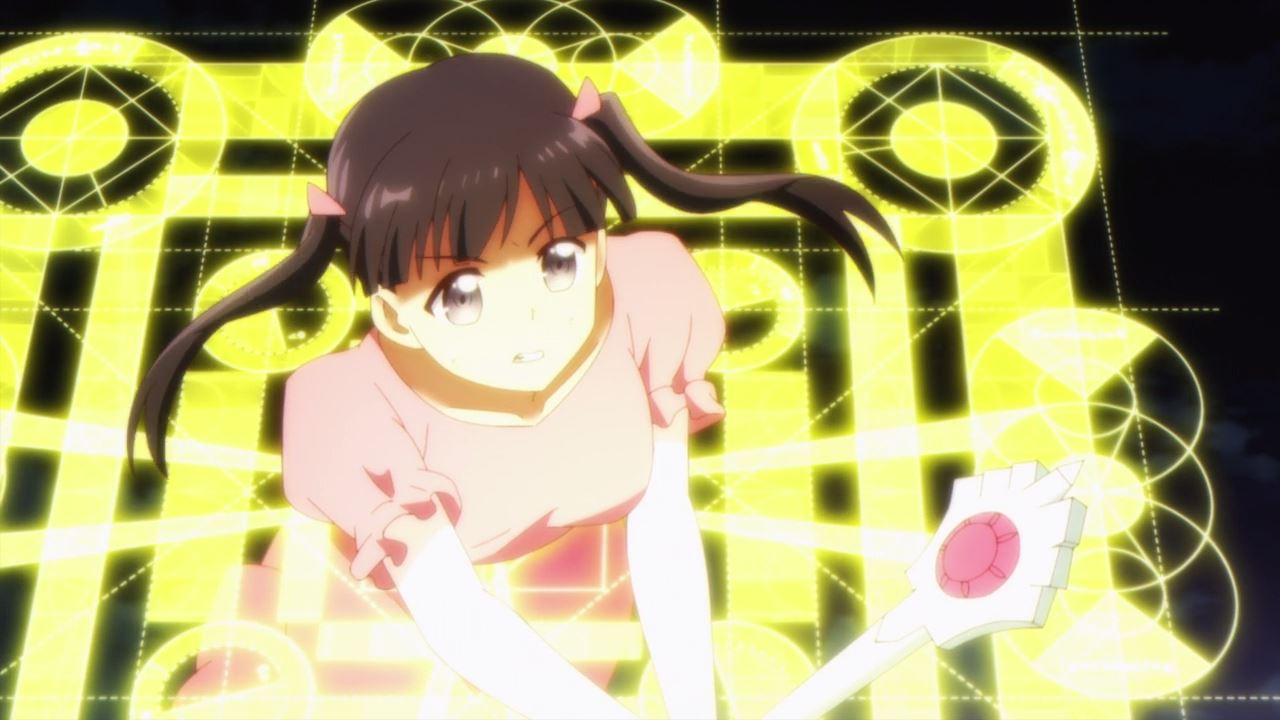 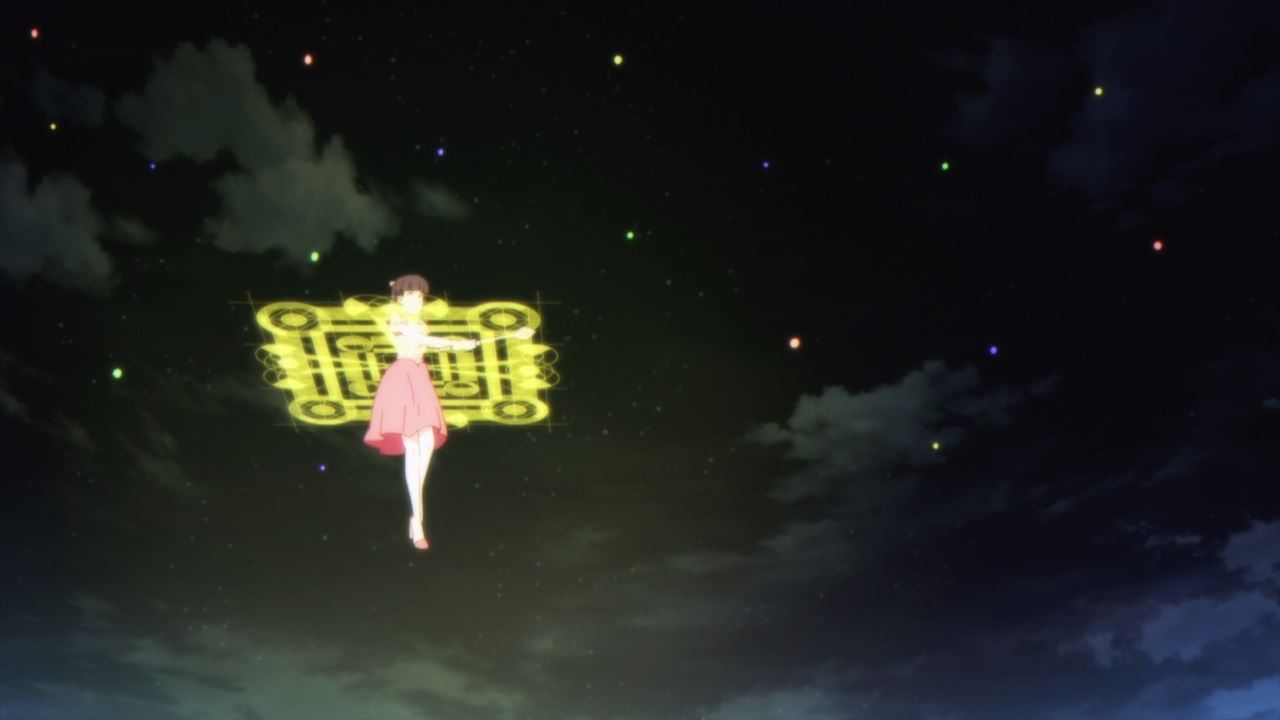 But even if they learned flying magic, it’s not like they can master it in a short amount of time as Tatsuya Shiba put safety measures whenever a magician’s psion level dips below the threshold. 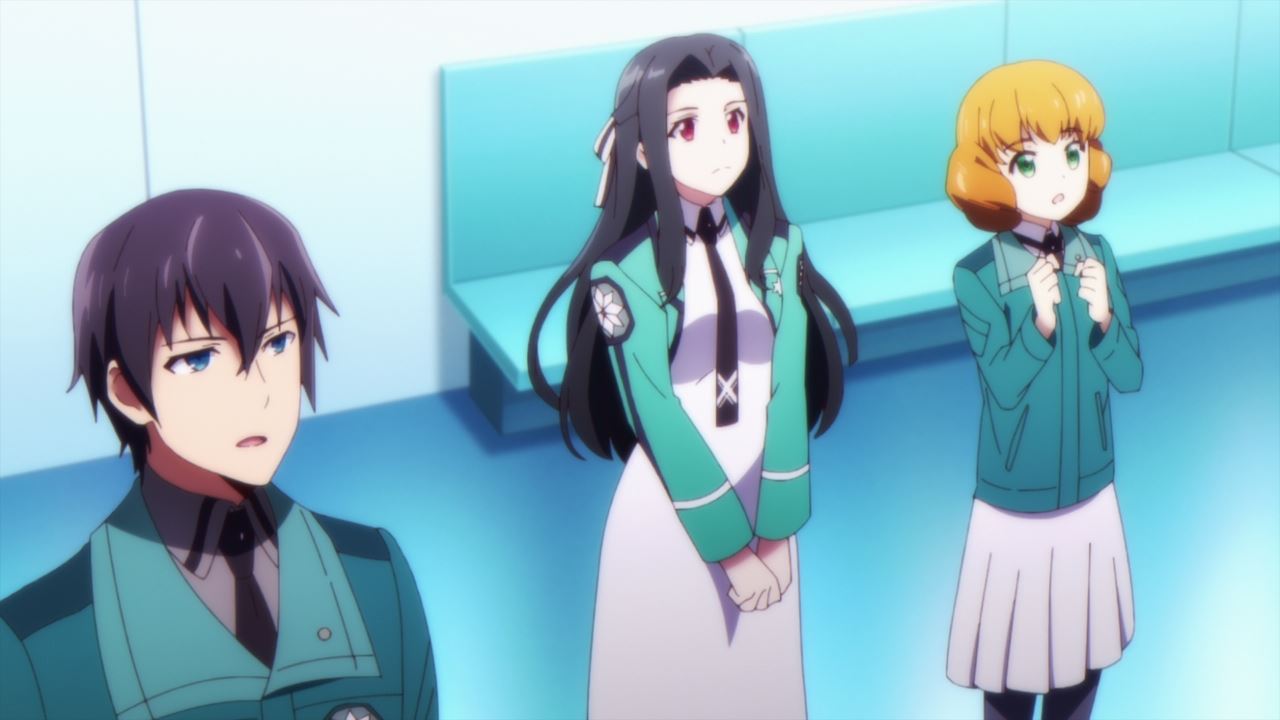 Speaking of Tatsuya, looks like he’s proud of his work as every magician can use flying magic safely. Then again, Miyuki is still winning against Airi. 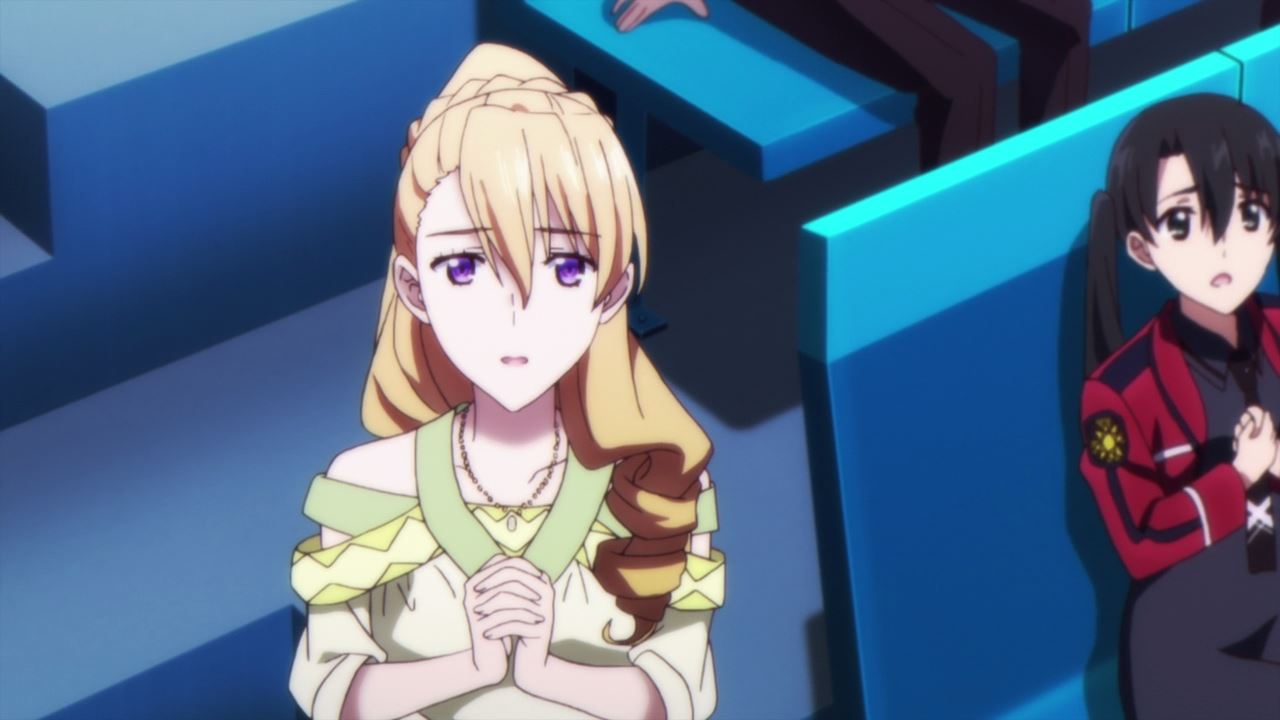 That’s until the arrival of Airi’s mother where she’s cheering her daughter. That’s nice and all, but I wonder if the Isshiki family still insist that results are everything? 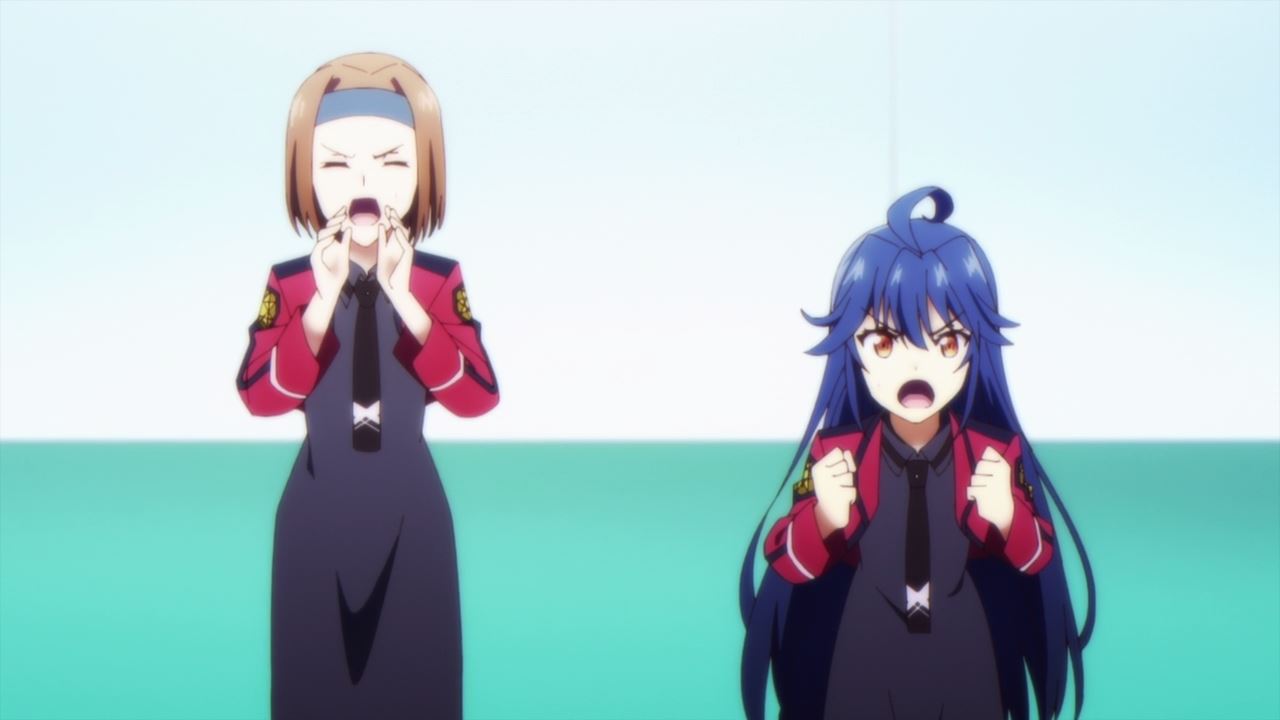 On the other hand, it’s not just Airi’s mother who’s cheering for her, but the likes of Saho Mizuo and Touko Tsukushiin are there to support the Éclair till the end. 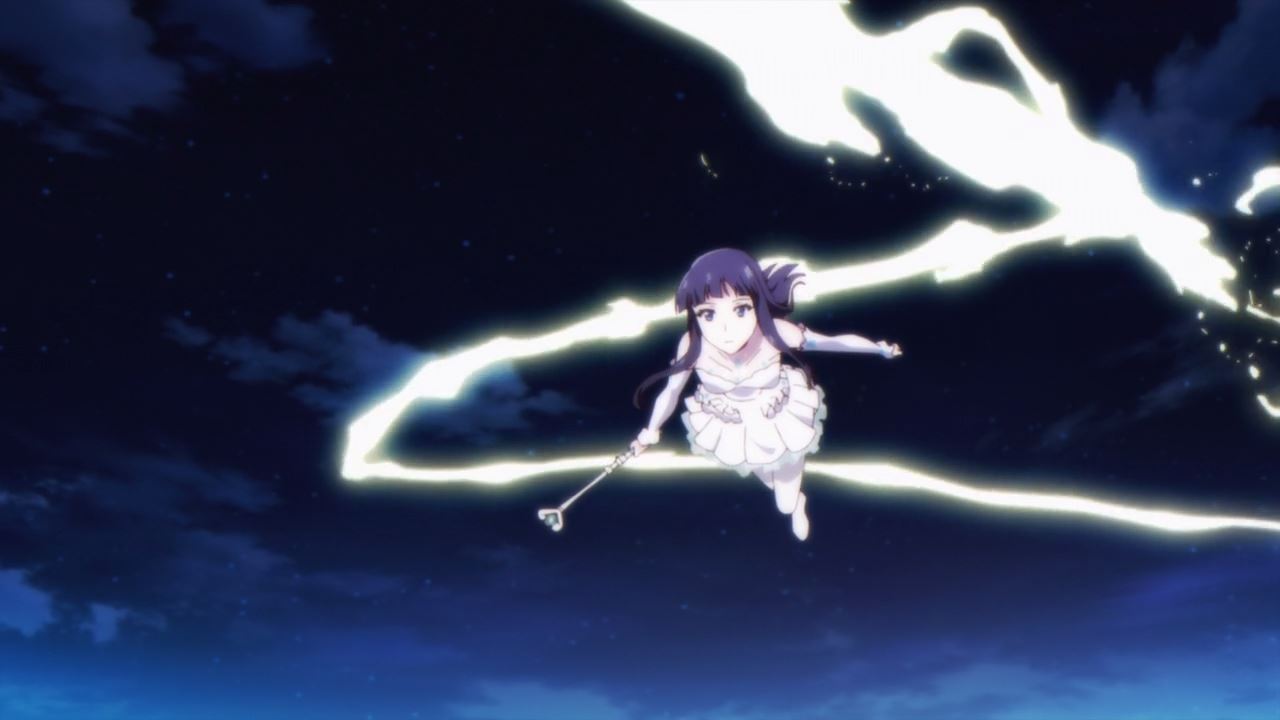 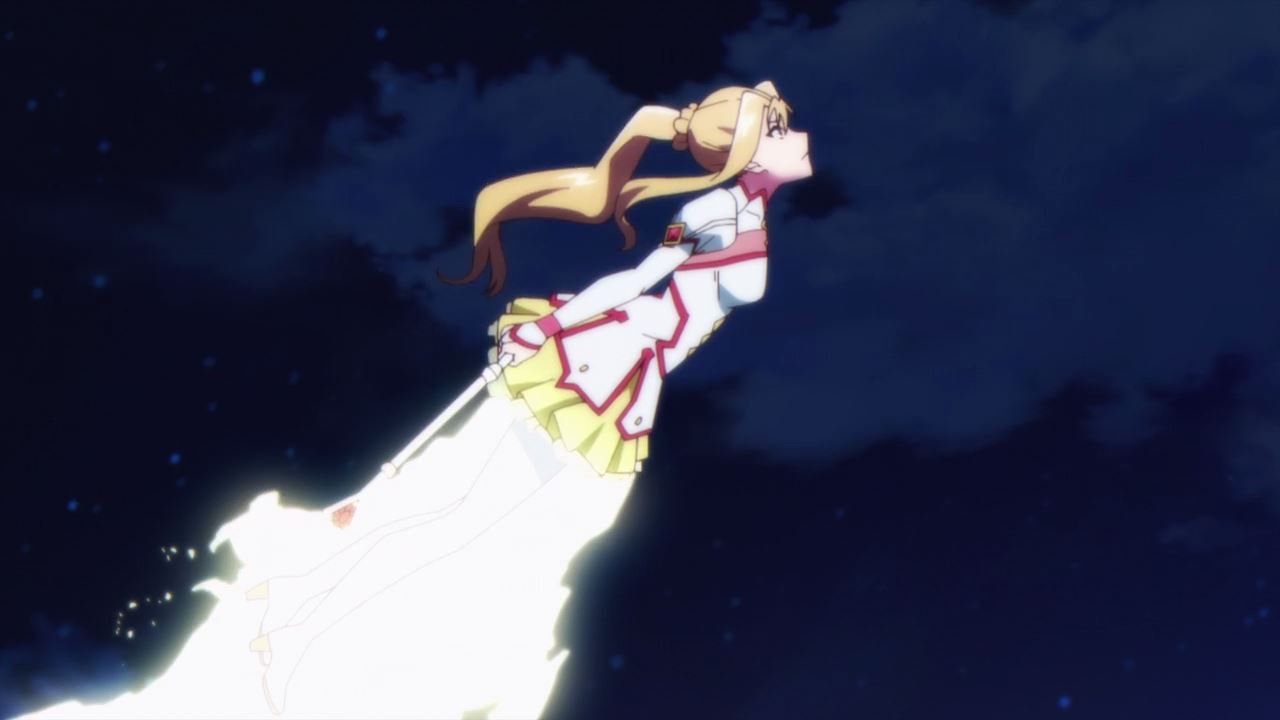 Anyways, thanks to the support of her mother and friends, Airi Isshiki decided to combine both flying and jump magic into an airdash. Very creative there! 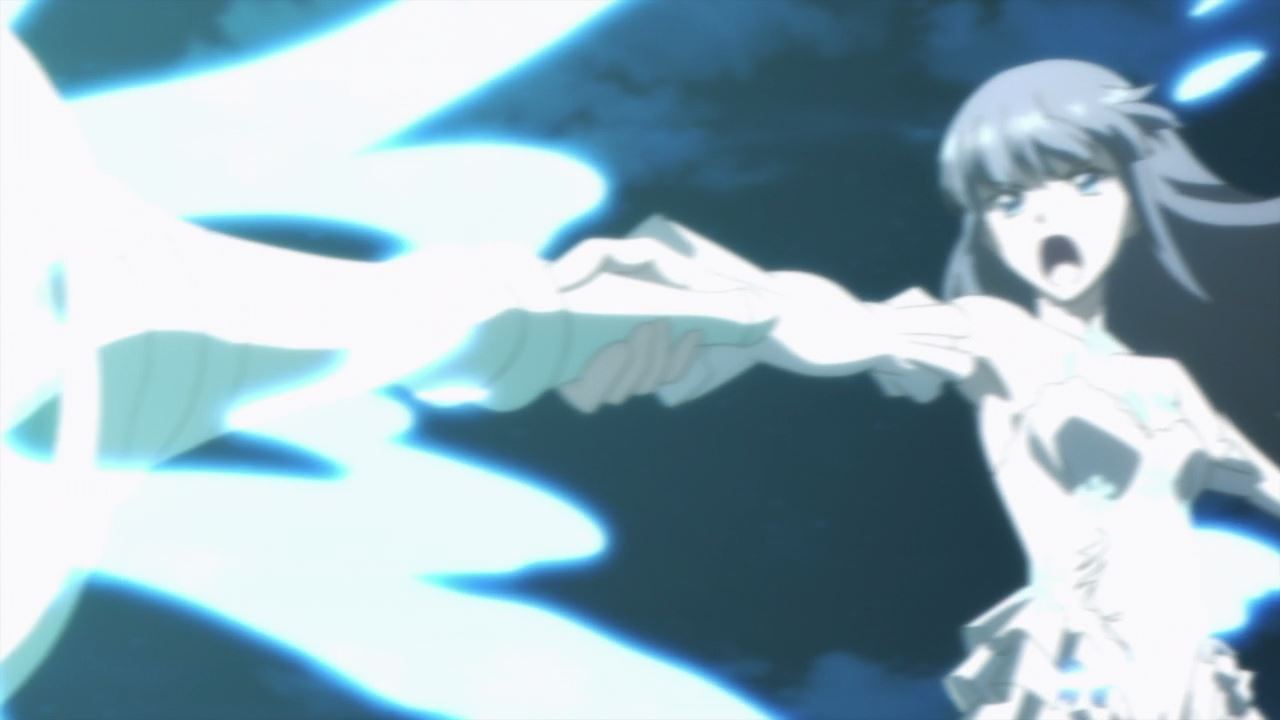 Of course, Miyuki Shiba won’t yield to the Éclair as she’ll pour everything to claim victory in the Mirage Bat finals. 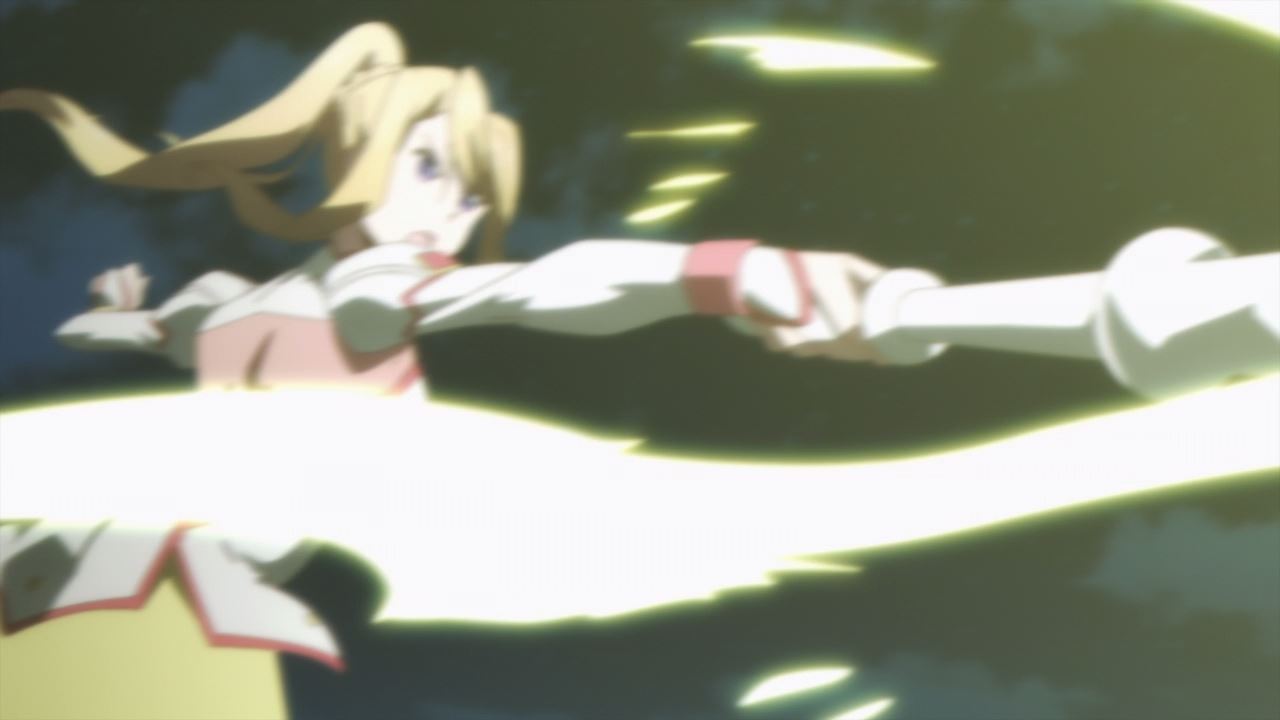 But seriously, I respect these two competitors as they’re pouring everything on this event. Then again, I wish the No Head Dragon is not involved in the Nine Schools Competition in the first place. 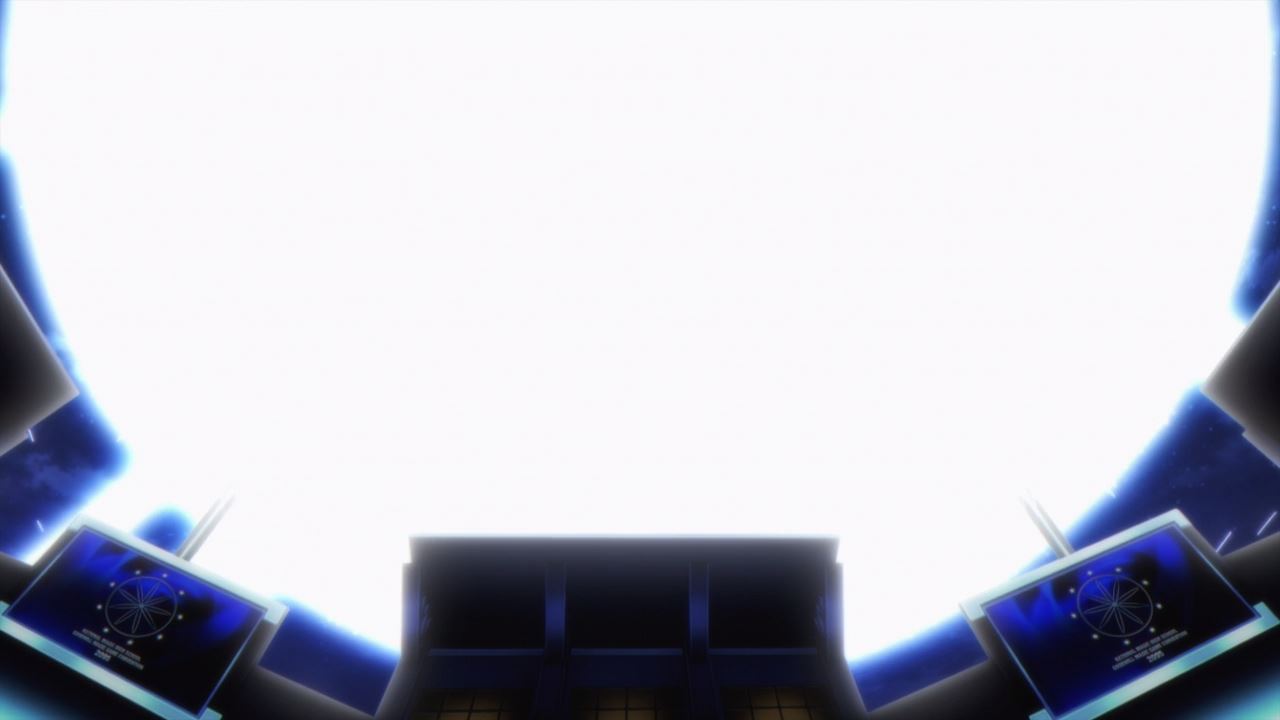 Anyways, here’s the climatic finish in the Mirage Bat finals! While both girls did there best, Miyuki Shiba claim victory over Airi Isshiki.

And thanks to Miyuki’s win at the Mirage Bat event, First High School takes the overall victory at the Nine Schools Competition. Now that the competition is over, it’s time for some unfinished business. 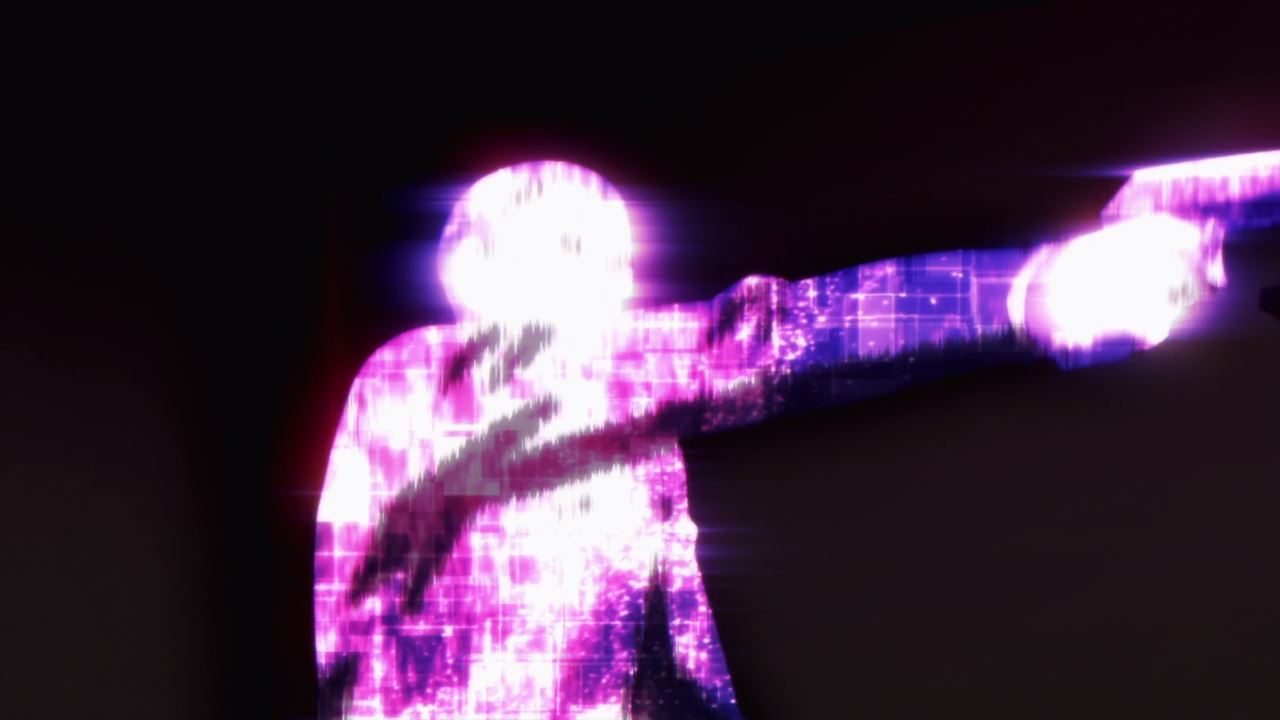 That’s right, it’s time to dismantle the Japanese branch of No Head Dragon as Tatsuya Shiba unleash hell towards those conniving criminals who try to ruin a high school competition. 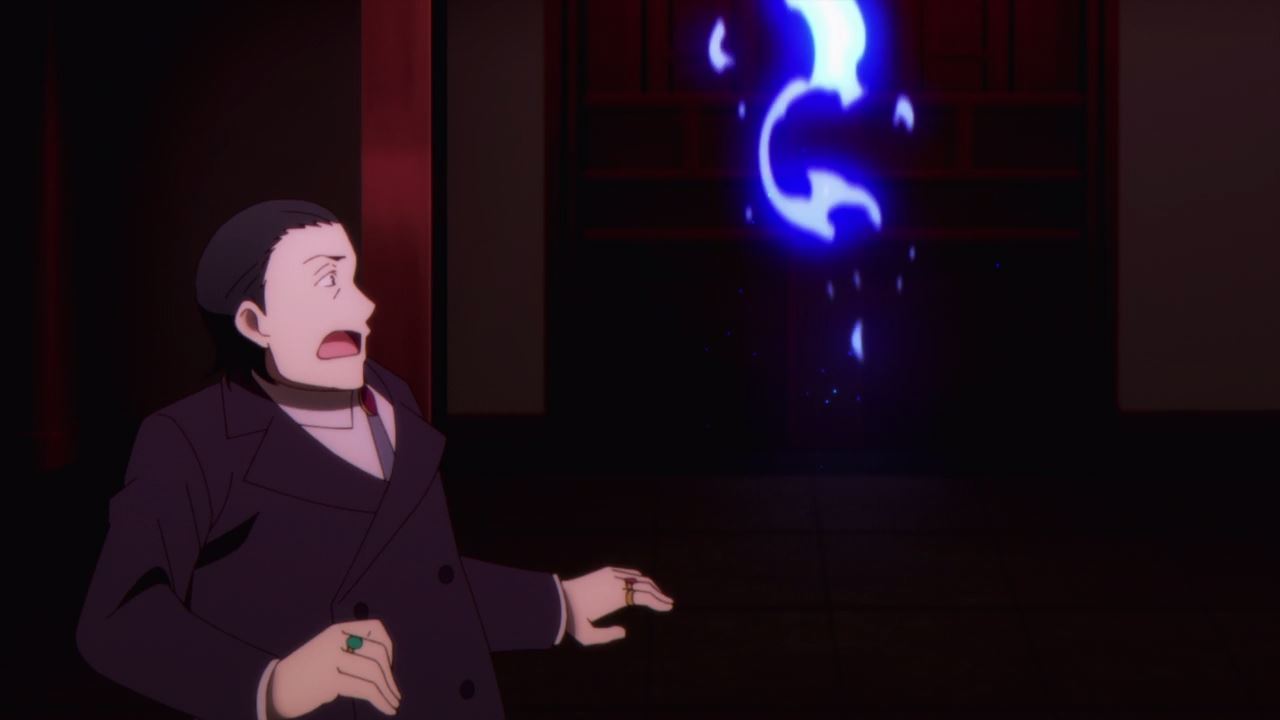 And really, Tatsuya won’t spare anyone from the criminal organization, including Douglas Huang where he’s pretty much helpless. 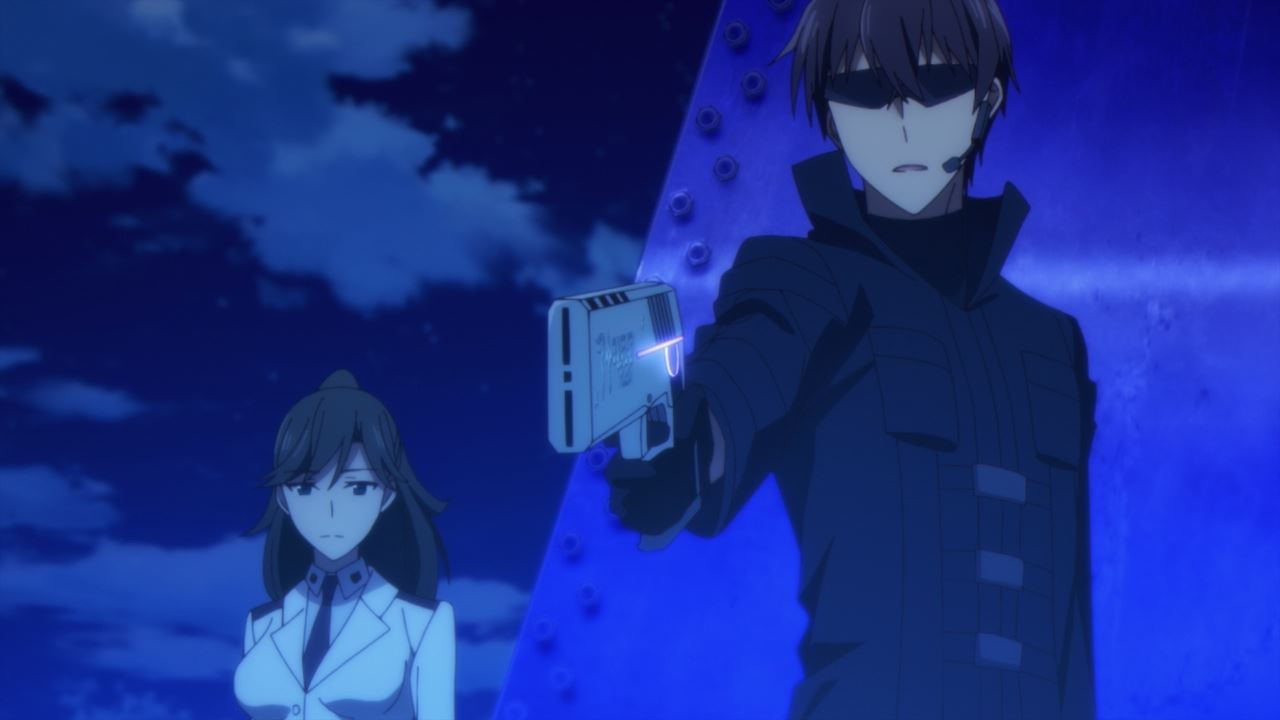 Oh yeah, here’s both Tatsuya Shiba and Kyouko Fujibayashi as they’re about to witness the final moments of No Head Dragon before Tatsuya pull the trigger.

Seriously, Tatsuya went really hard towards No Head Dragon to the point that it’s overkill! But why would he do such great lengths to protect Miyuki at all cost? 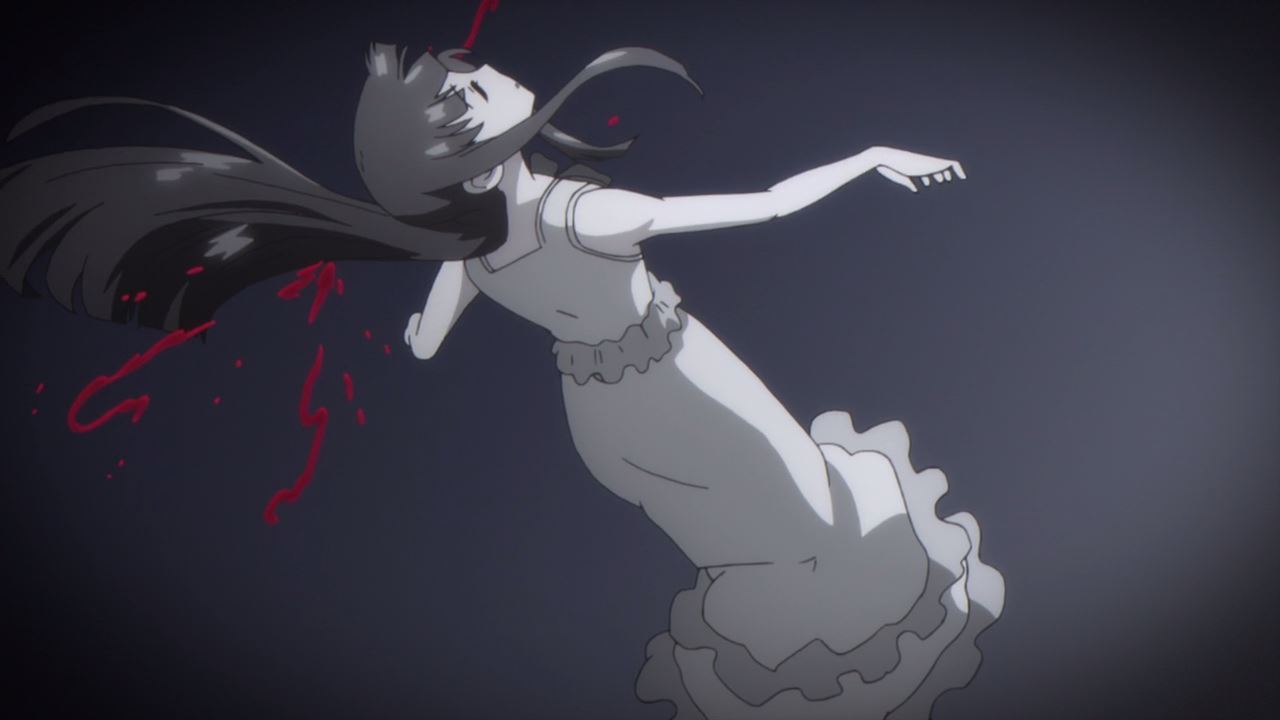 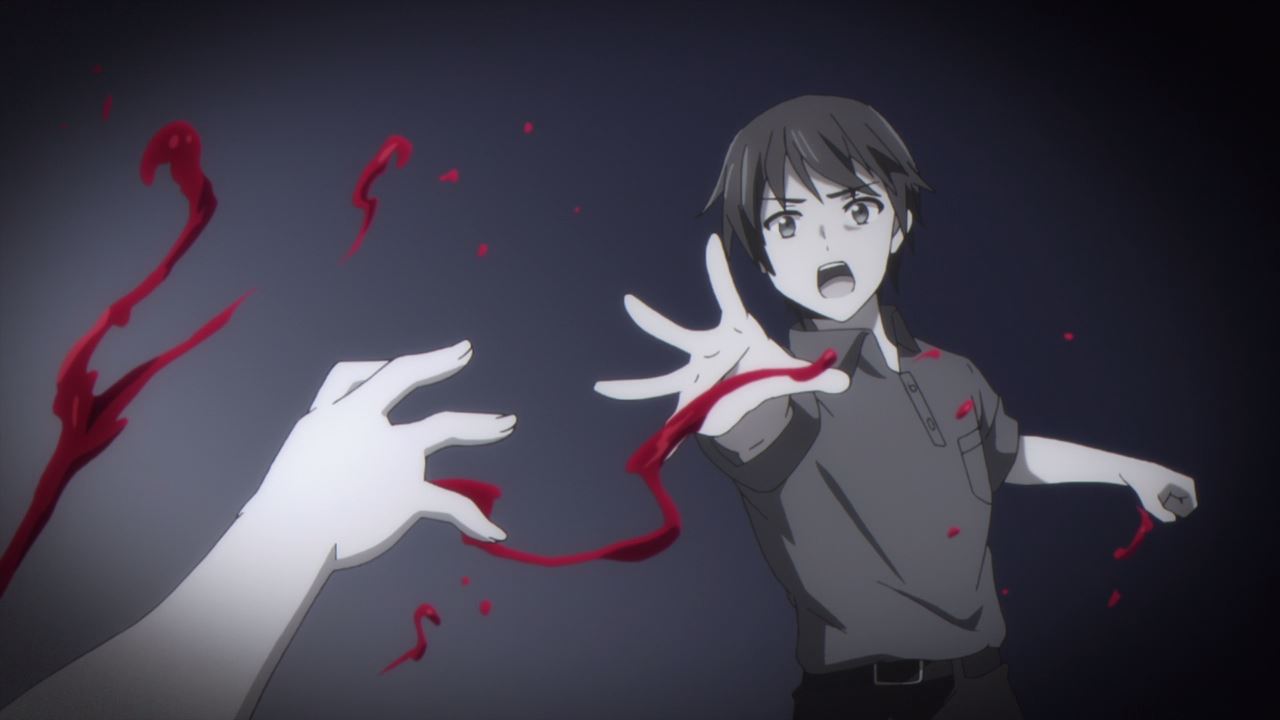 Well, there’s an event in Okinawa where Miyuki was severely wounded at the hands of a terrorist. And seeing that his sister is close to dying, Tatsuya got really angry that he unleashed a powerful magic called Demon Light towards those terrorists.

Of course, Maya Yotsuba doesn’t want Tatsuya to do that dangerous spell again that the matriarch restrict everything towards him. Basically, Tatsuya is treated as Maya’s pawn, something Miyuki felt bitter about it.

But let’s move onto the present where Airi Isshiki respects Miyuki Shiba for putting her best efforts towards the competition.

Really glad that the Éclair had no hard feelings towards her rival, which is a good thing as Airi Isshiki mellowed out once the Nine Schools Competition is over.

Of course, there’s still some horseplay between First and Third High School students as Touko Tsukushiin summoned a snake to strip Honoka Mitsui naked. Seems that Touko wants to grab her tits since Honoka has a massive pair! 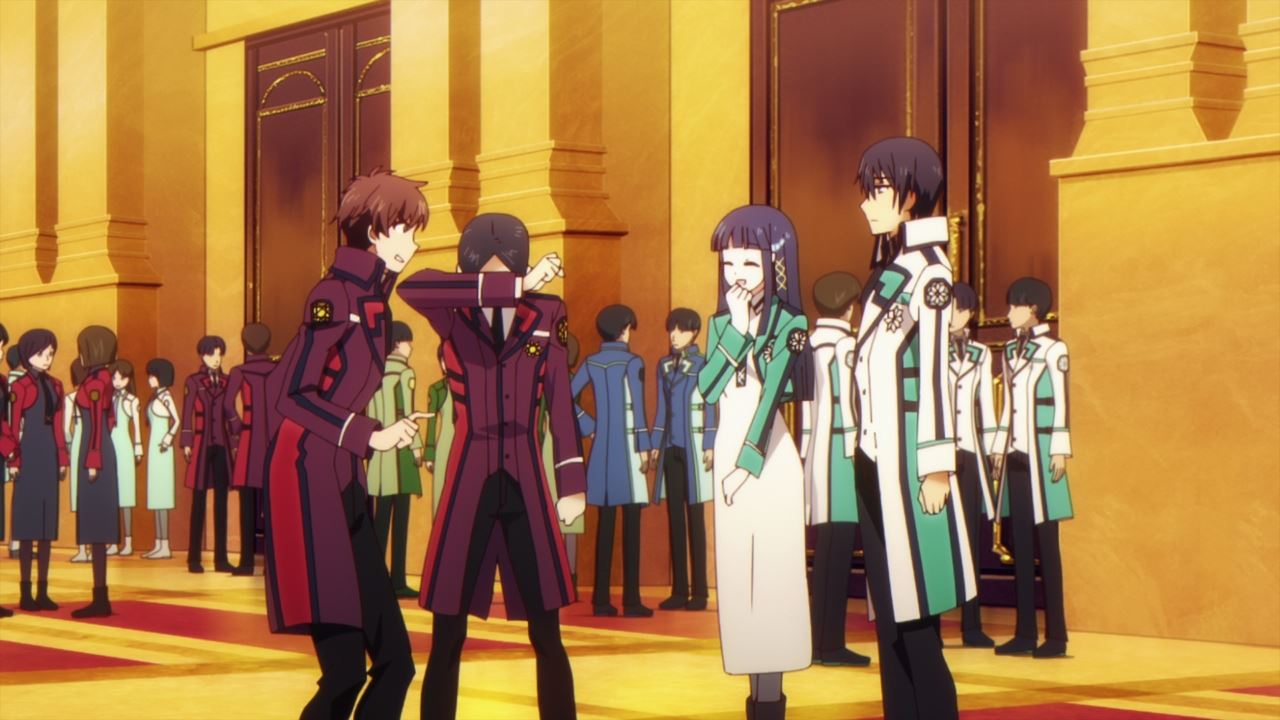 Now then, it’s time for the after-party where Masaki Ichijou was dumb-founded that both Tatsuya and Miyuki are siblings.

Um Masaki, I think you should know it beforehand that they’re siblings, but you’re fixated on dancing with Miyuki at the ball. Too bad that Tatsuya beat the hell out of you at the Monolith Code! 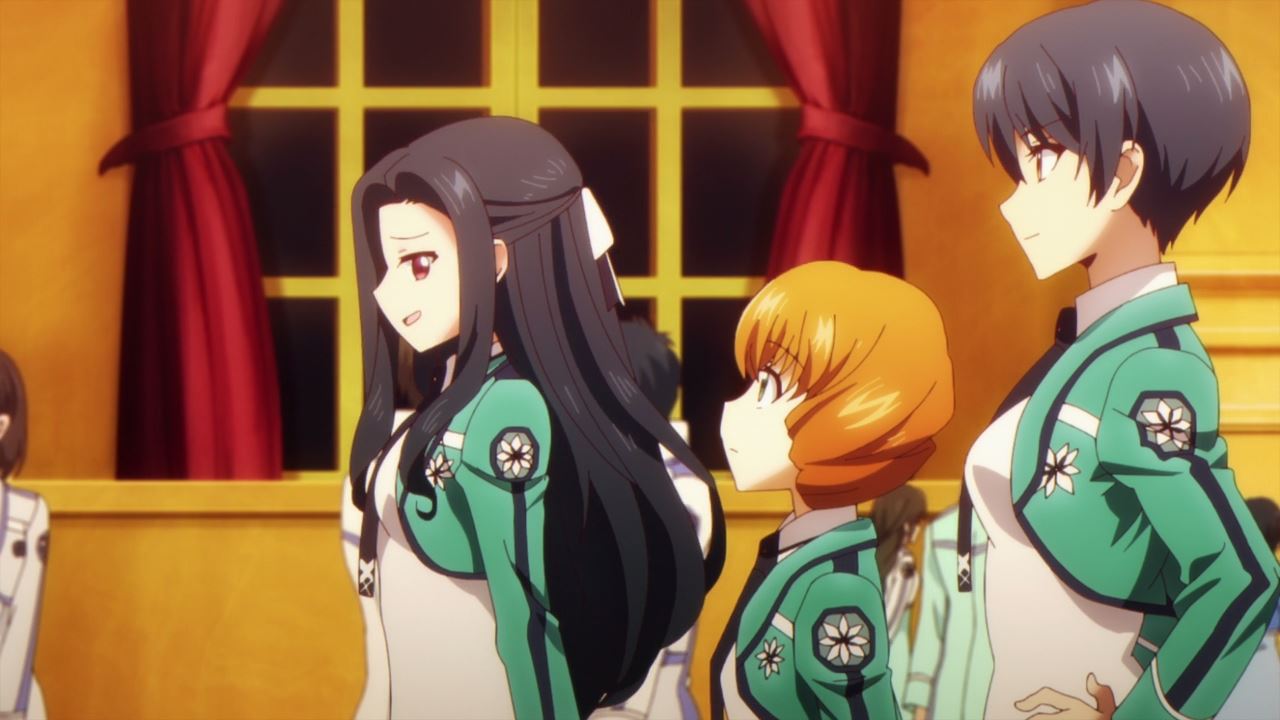 Meanwhile, here’s Mayumi Saegusa where she felt a sigh of relief that First High School won the Nine Schools Competition. Of course, she’s not done yet as Mayumi is about to tell a story on why the blooms and the weeds exists in First High School.

Turns out that First High School is the one to blame for recruiting lots of students in the middle of a school term, from messing up the order of school uniforms to having a few (or no) instructors at all back in those days. Man, I’m really baffled that First High School screw it up big time which is why there’s a discontent between Course 1 and 2 students until the arrival of the Shiba siblings.

Unfortunately, Saegusa will have to keep this secret to Miyuki ’cause if she learned something that’s very trivial, she might freeze hell over the school! 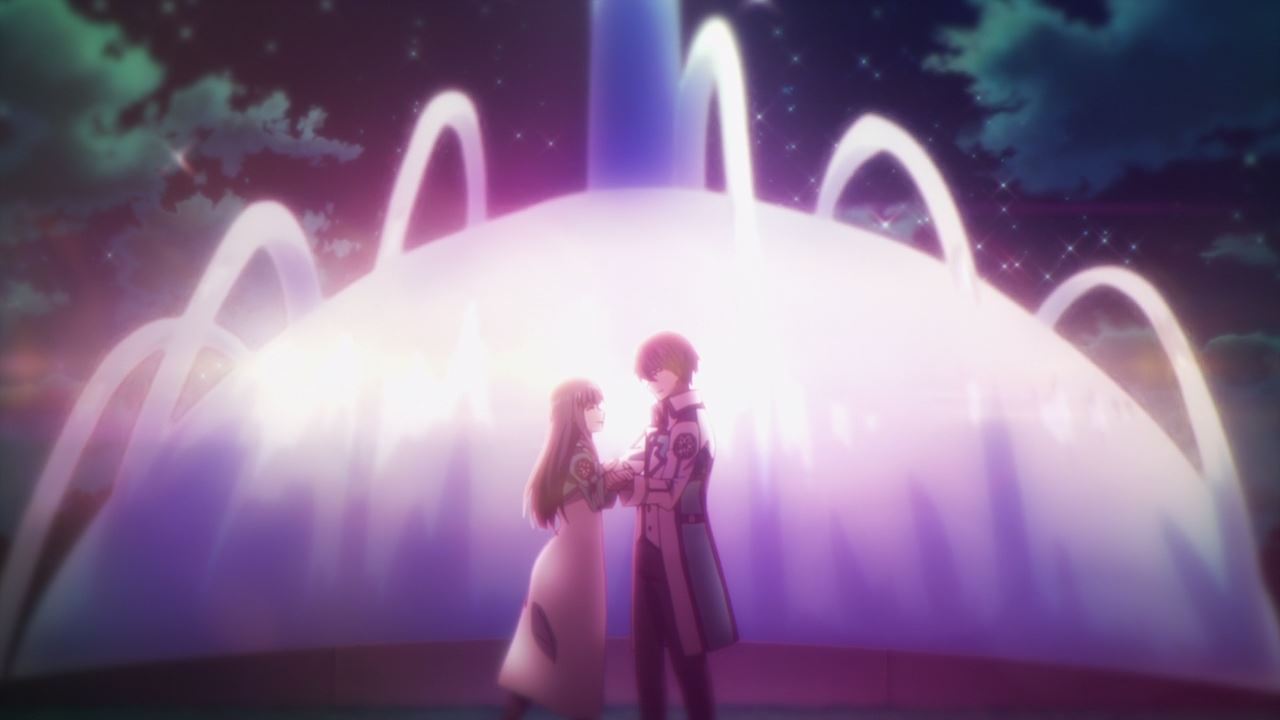 One last thing, here’s the Shiba siblings where they dance at the fountain, marking the end of the Nine Schools Competition arc. Well, that was a roller coaster ride on this Mahouka spin-off as I feel that this show, especially when handling the 2nd story arc, is somewhat better than the main series ’cause it doesn’t drag further.

C’mon, seeing Miyuki Shiba and her friends striving to win their respective events is enjoyable compared to Tatsuya Shiba hunting down a criminal organization. Speaking of Tatsuya, I should say that he’s aware of his sister complex, especially when it comes to over-protecting Miyuki from various dangers during the competition.

In any case, that’s about it for Mahouka Koukou no Yuutousei where all’s well that ends well. Now the only left to do is to wait for the eventual 3rd season, although Kadokawa will take a long time to announce it.