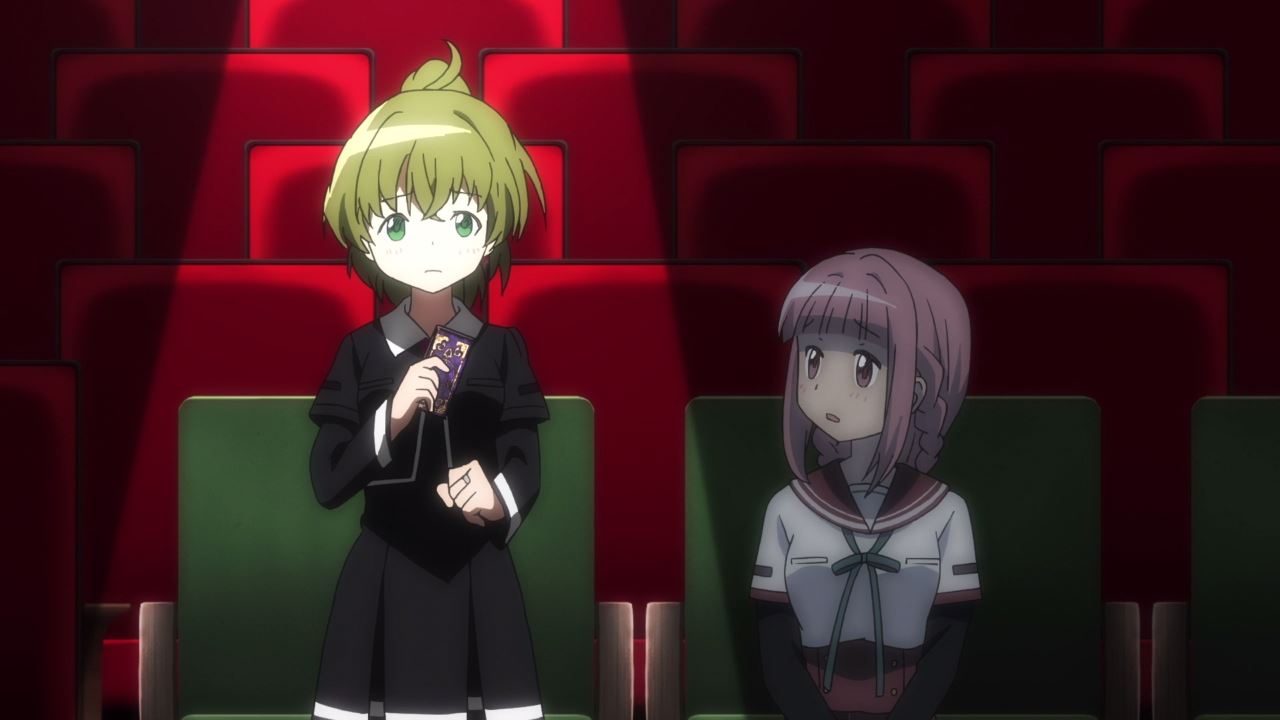 Let’s start the final episode where Iroha Tamaki is having a weird dream after witness the horror of Tsuruno Yui’s indestructible body. Considering that she’s fused with an Uwasa, let’s say that Tsuruno is more creepier than before.

Anyways, Iroha was taken to a theater where she’ll watch Tsuruno’s start of darkness. Not only that, but Iroha is accompanied by Mel Anna where her fortune is 100% accurate, regardless of whether it’s good or bad. 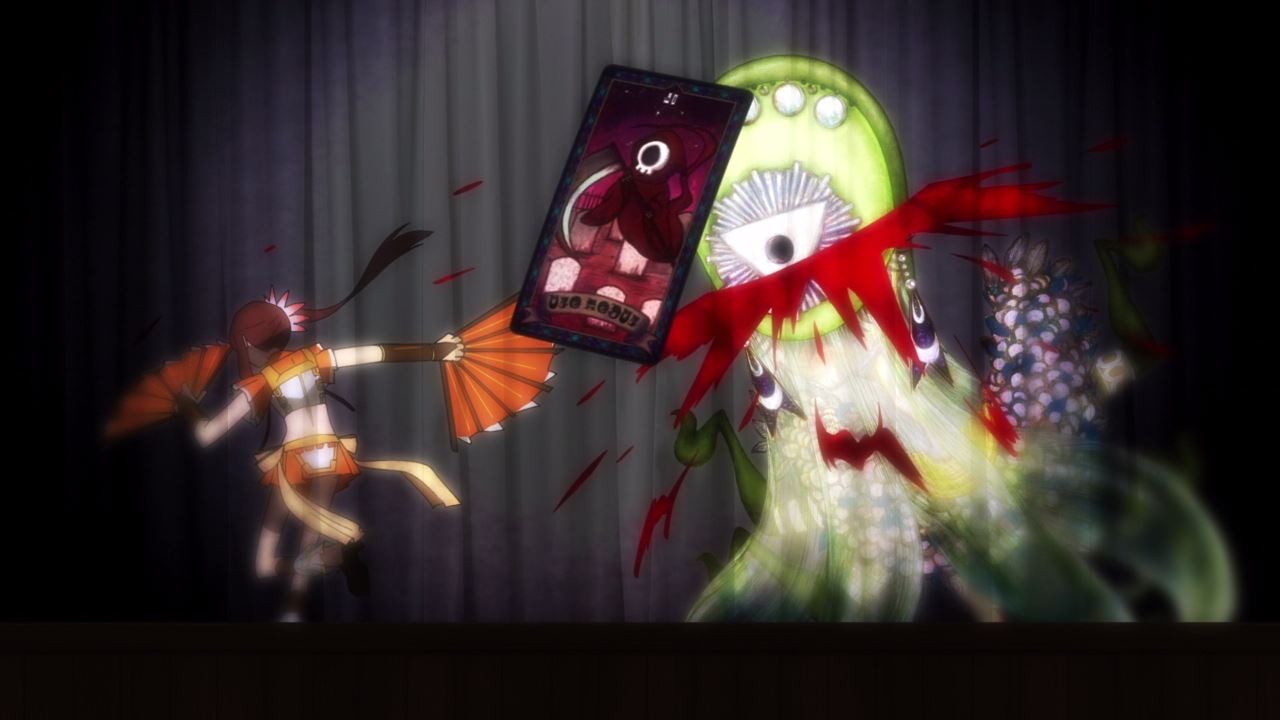 And sadly for Mel, she had bad luck on that day where Mel became a witch. And to add more insult to her injury, Tsuruno Yui came a bit late to save her friend as she was forced to kill Mel Anna.

But yes, Tsuruno blamed herself for not being strong enough to rescue Mel Anna from her terrible fate, hence she tries to push herself harder in order to become the strongest magical girl. Heck, she even have her Soul Gem modified by Touka Satomi. 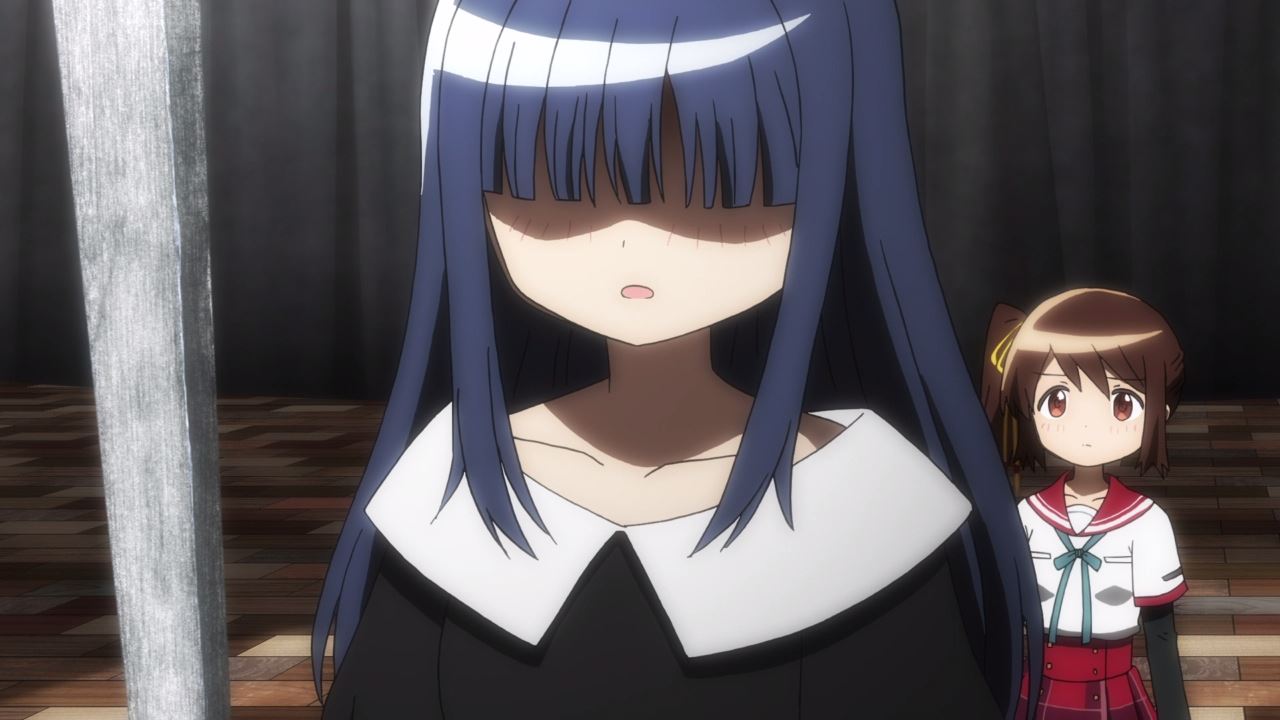 Of course, it’s not just Tsuruno Yui who felt bitter on failing to save Mel. Turns out that Yachiyo Nanami blamed herself for not letting Tsuruno fight a strong witch that mortally wounded Mel. Hence, her heart was closed off until Iroha reach out to her.

While it’s sad that Tsuruno and Yachiyo lost a dear friend, they can’t put up a brave face all the time as they need to share each other’s feelings. 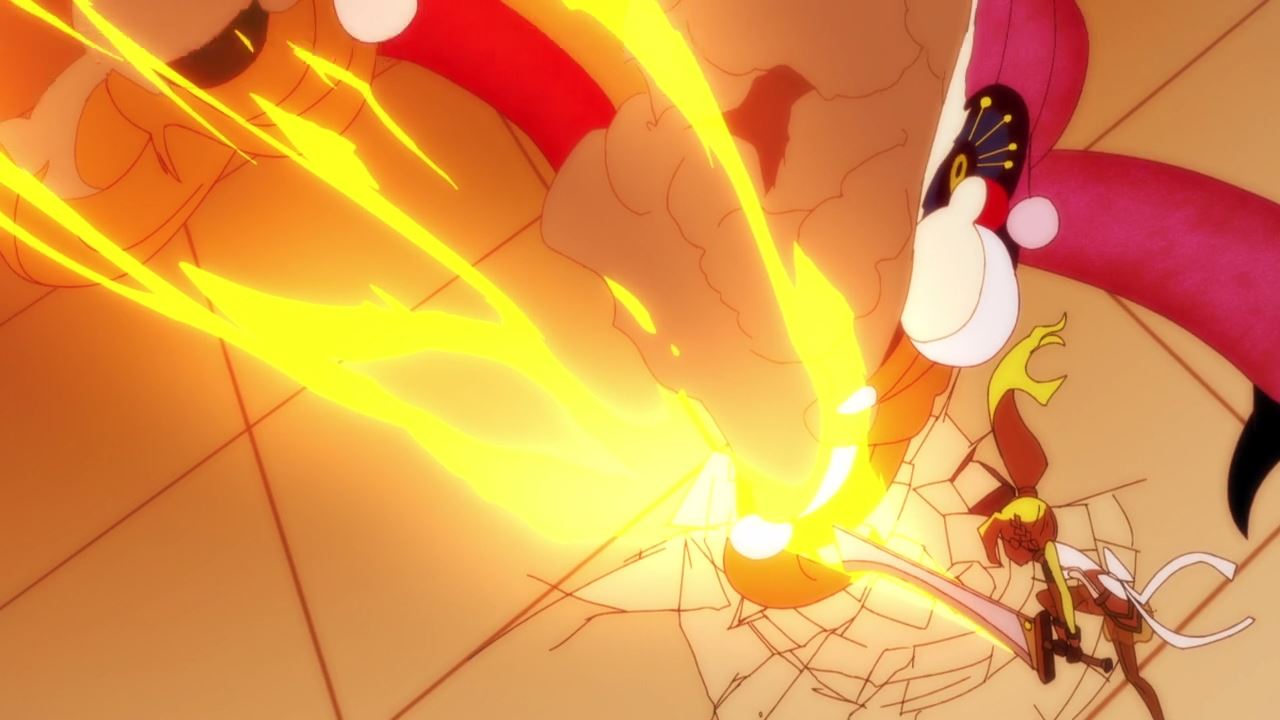 But now, let’s move onto the present where reinforcements have arrived. Really glad that a certain magical girl has stepped up to save Tsuruno Yui. 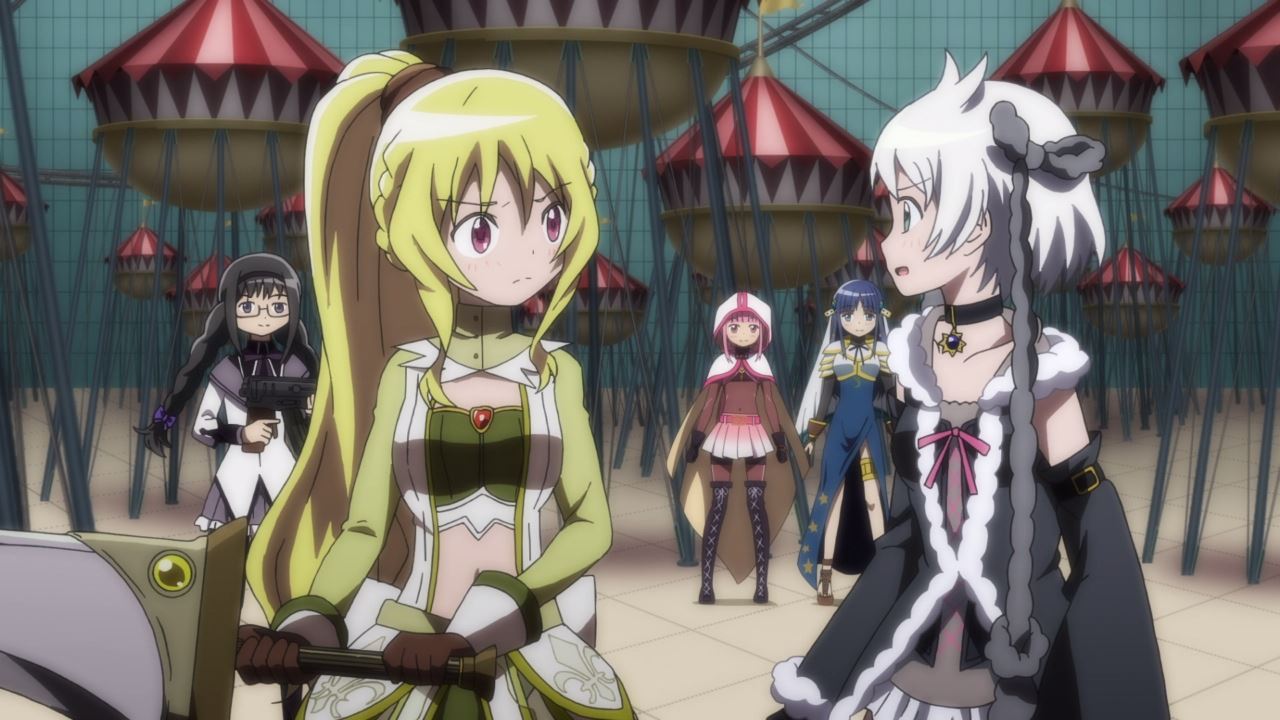 Well, I shall say two magical girls and Mifuyu Azusa and Momoko Togame are here to save Tsuruno from being bound by an Uwasa.

While it’s nice to see them back in action, I wonder what happened to Mitama Yakumo, Rena Minami, and Kaede Akino? As far as I remember, Mitama is trying to save Kaede from being stuck as a Doppel. 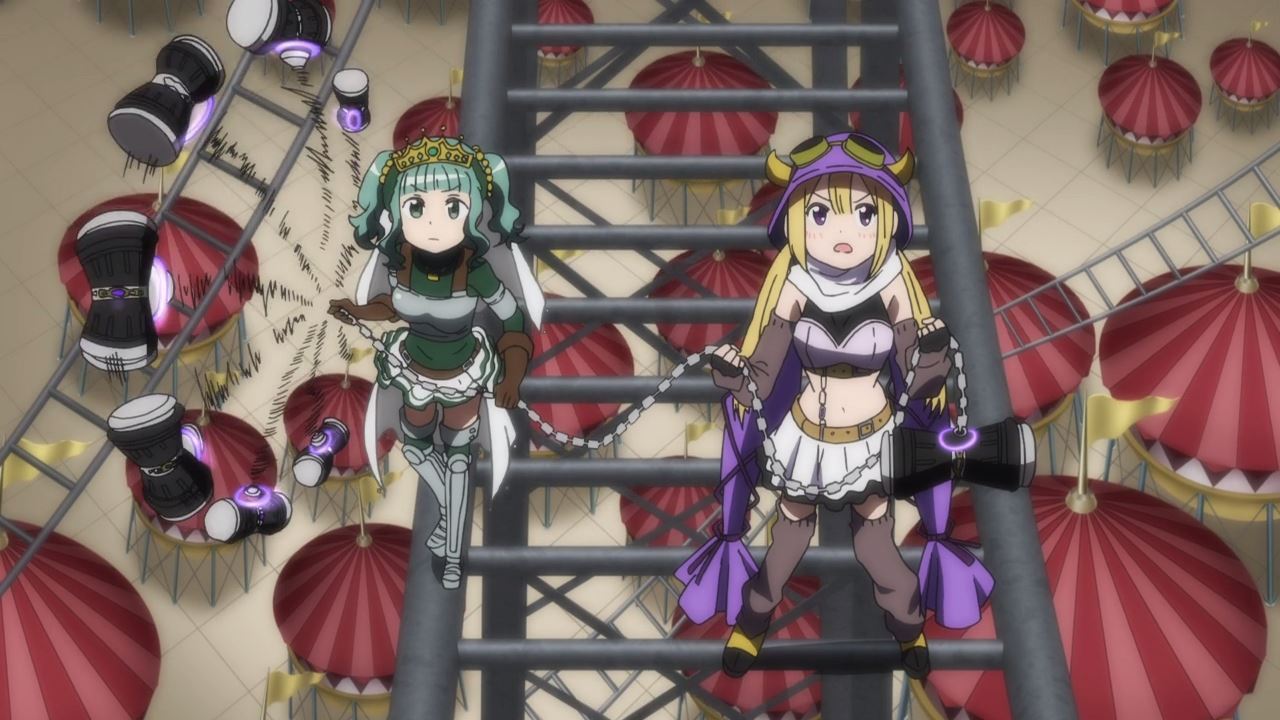 Meanwhile, here’s both Felicia Mitsuki and Sana Futaba where they’re gonna restrain Tsuruno Yui using a mallet and a chain. 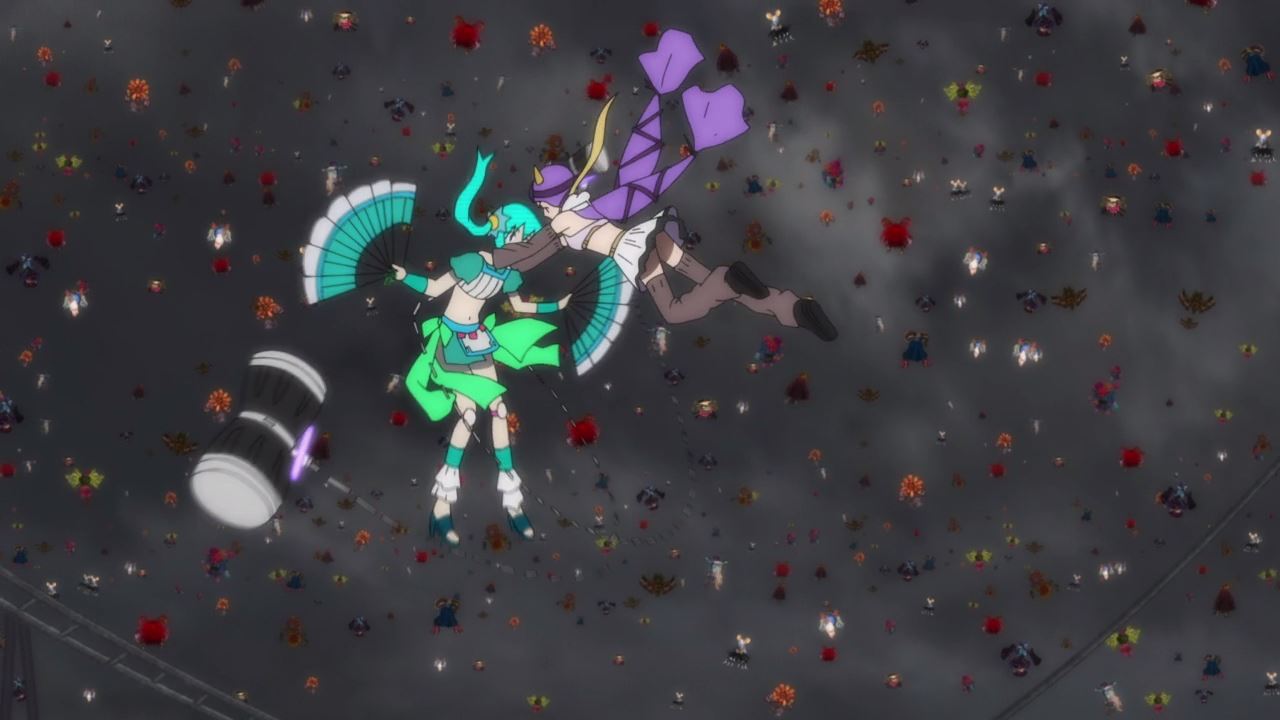 And thanks to their combined powers, they managed to restrain Tsuruno as they’ll have another crack at saving her. 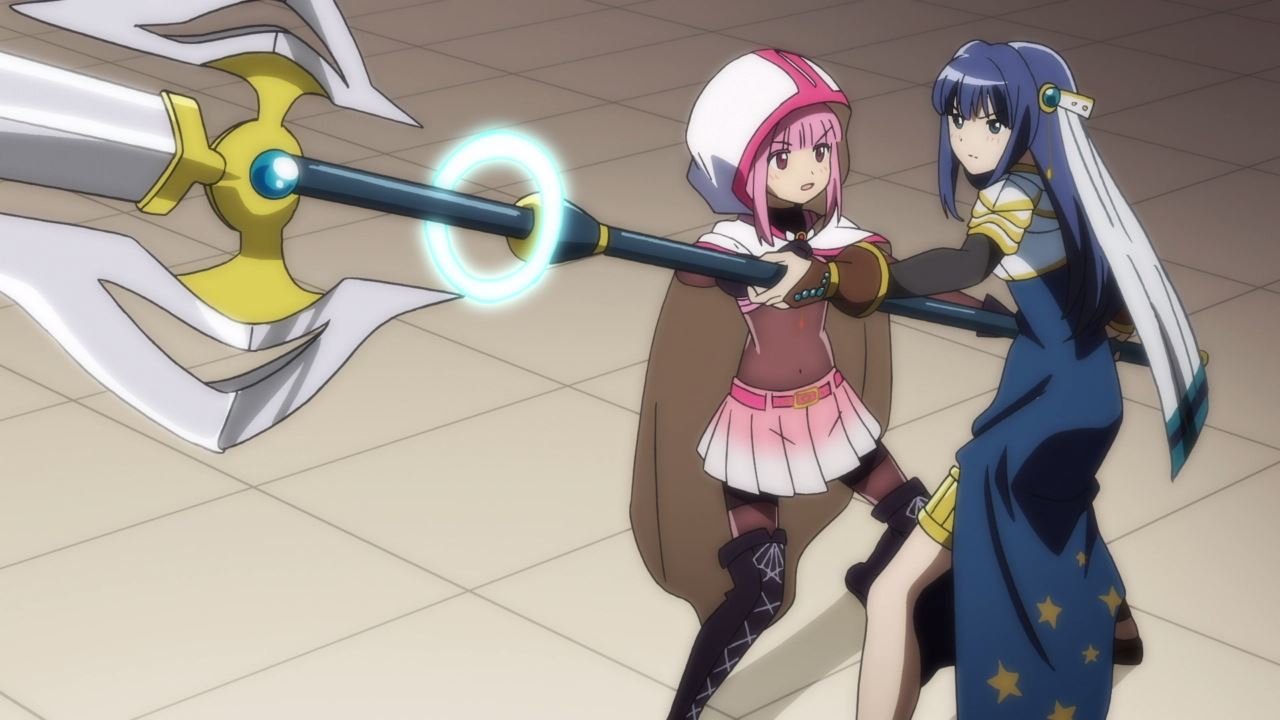 This time, both Yachiyo Nanami and Iroha Tamaki will try to connect Tsuruno Yui’s broken heart with a spear. I hope they’ll succeed on their second try. 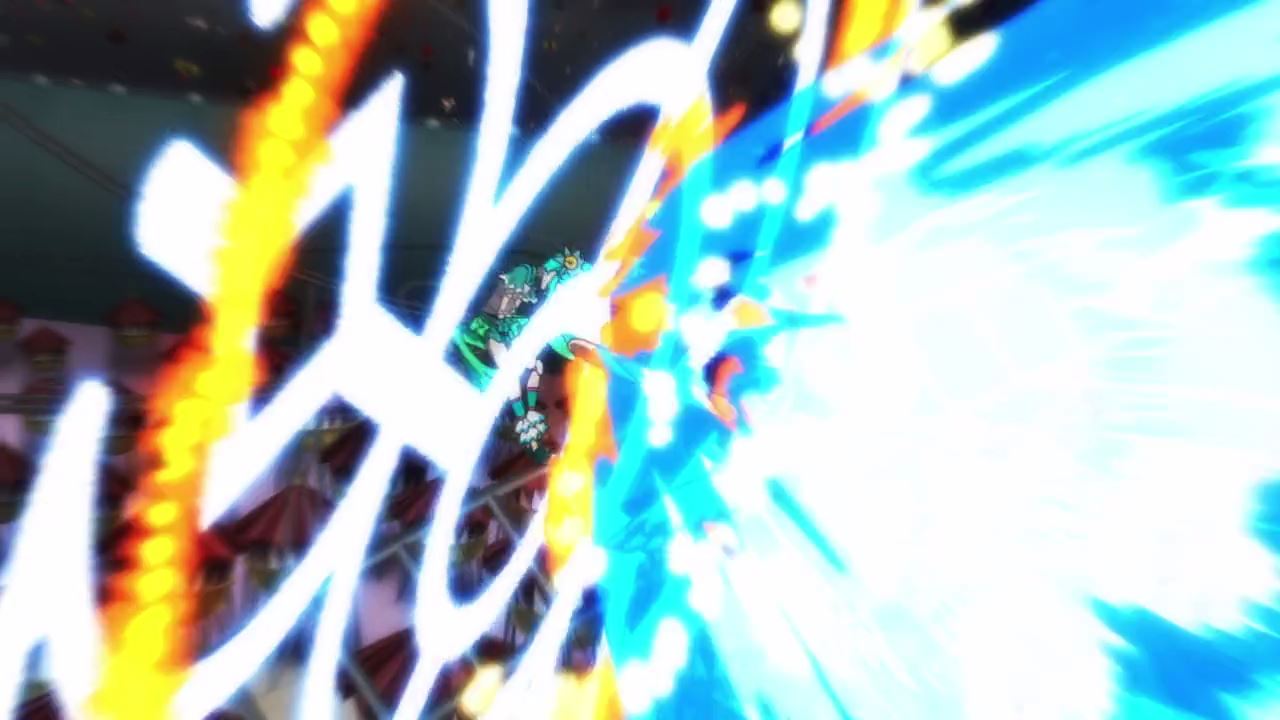 Anyways, it’s time for both Yachiyo and Iroha to reach Tsuruno’s heart once again, although I’m scared that they might do more harm than good. 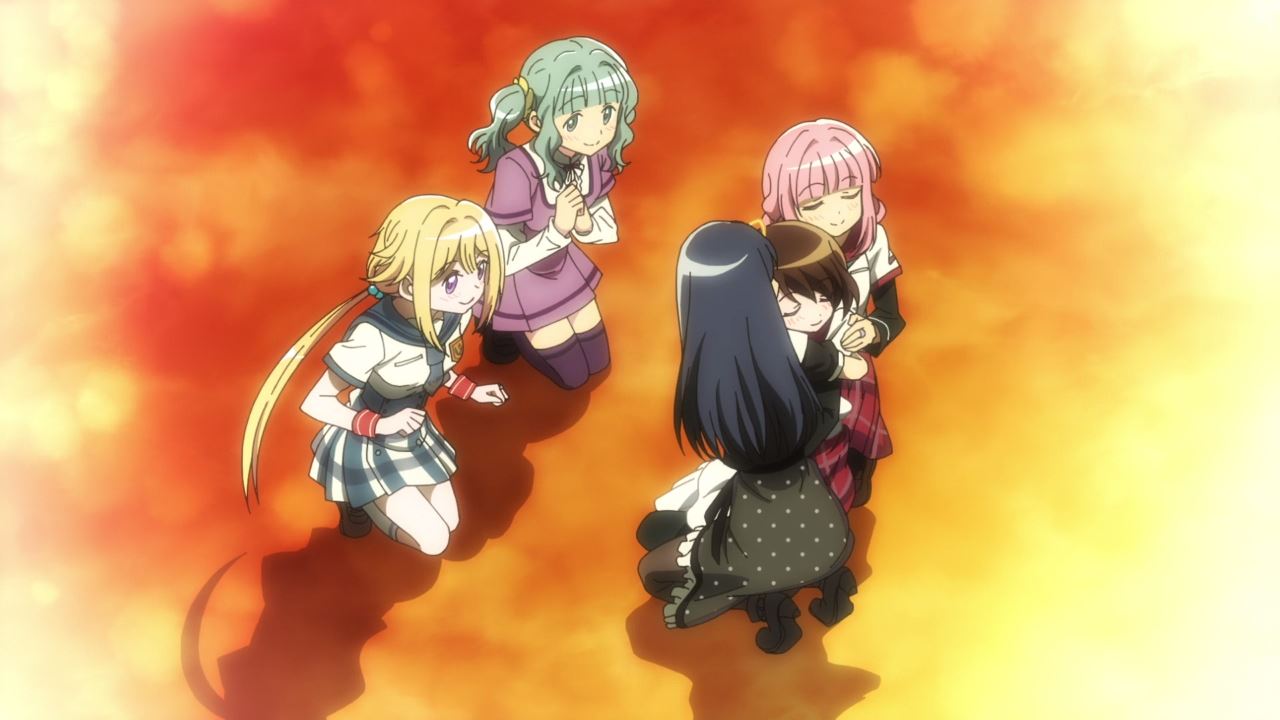 Fortunately, they managed to reach Tsuruno Yui’s heart where her friends are here to comfort her. I’m glad that they succeeded on saving Tsuruno. 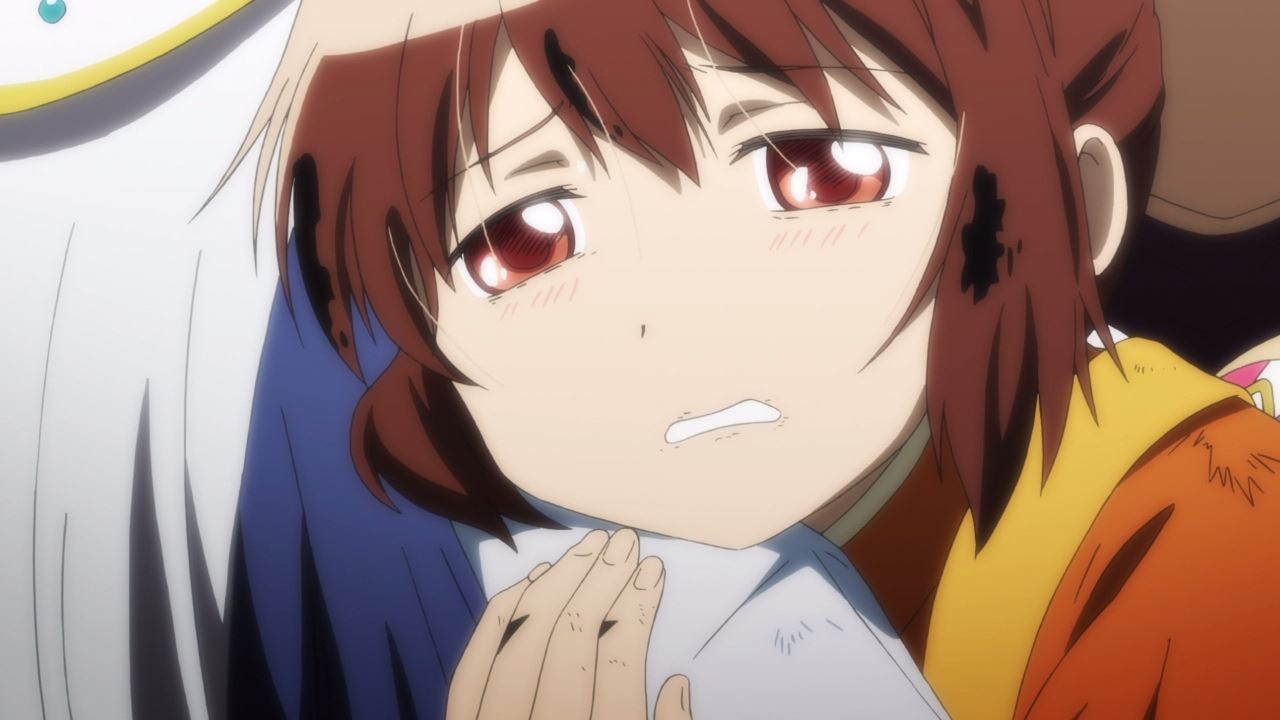 And the best part, she’s alright as Tsuruno Yui is free from the Uwasa’s influence. Looks like Mitama’s method is successful. 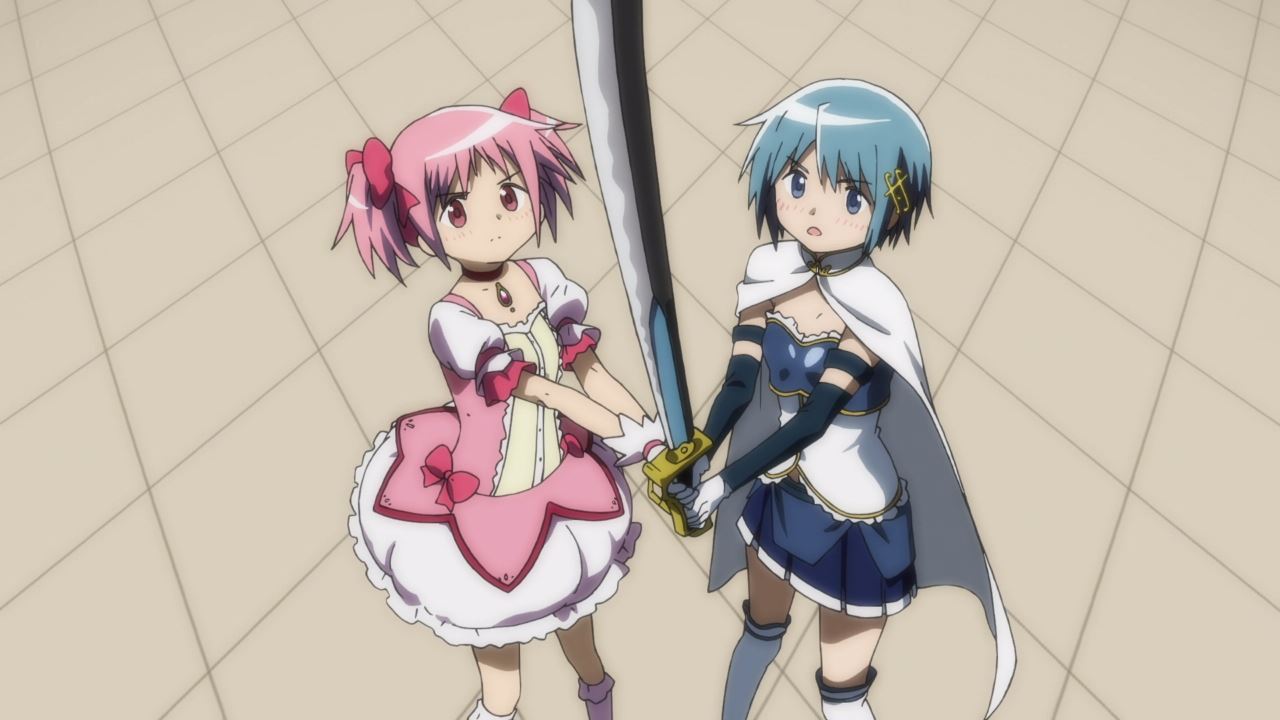 Now then, it’s time to save Mami Tomoe as Sayaka Miki and Madoka Kaname connect their hearts to form a giant saber that will pierce Mami’s heart. 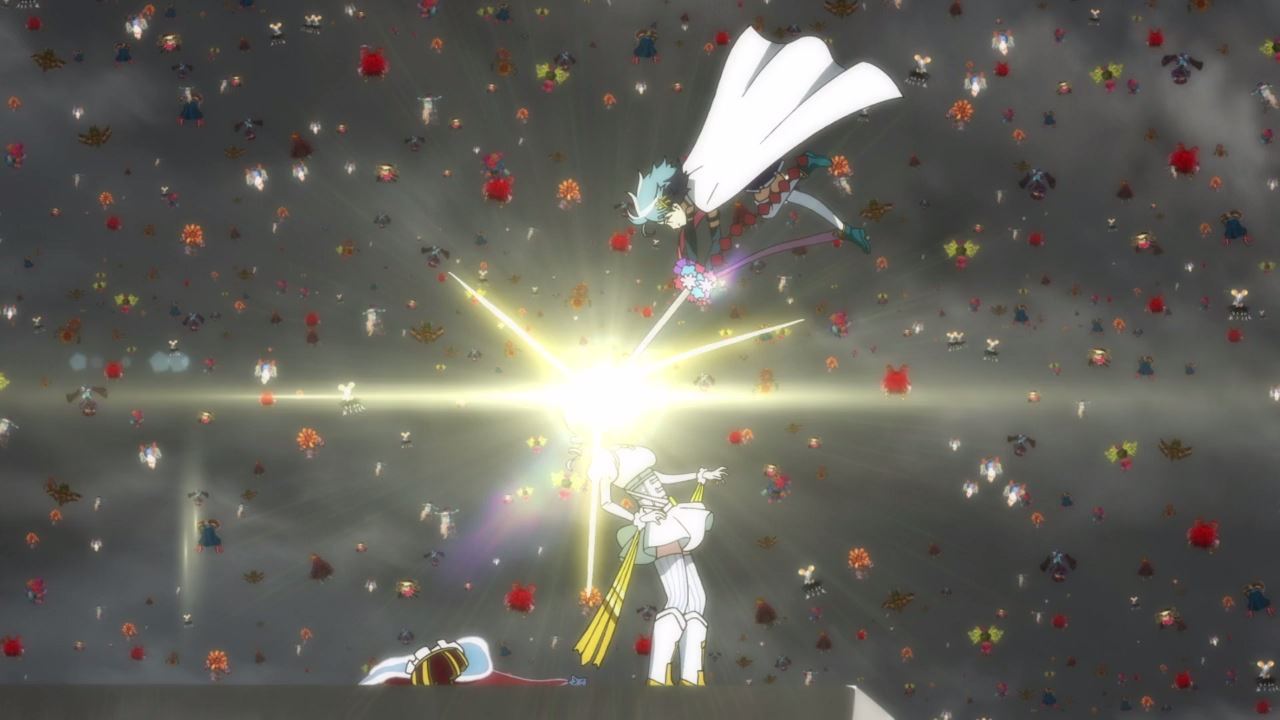 Well actually, they’re aiming at her forehead as Mami’s heart is located there. Would it be better if her heart is placed in her chest? 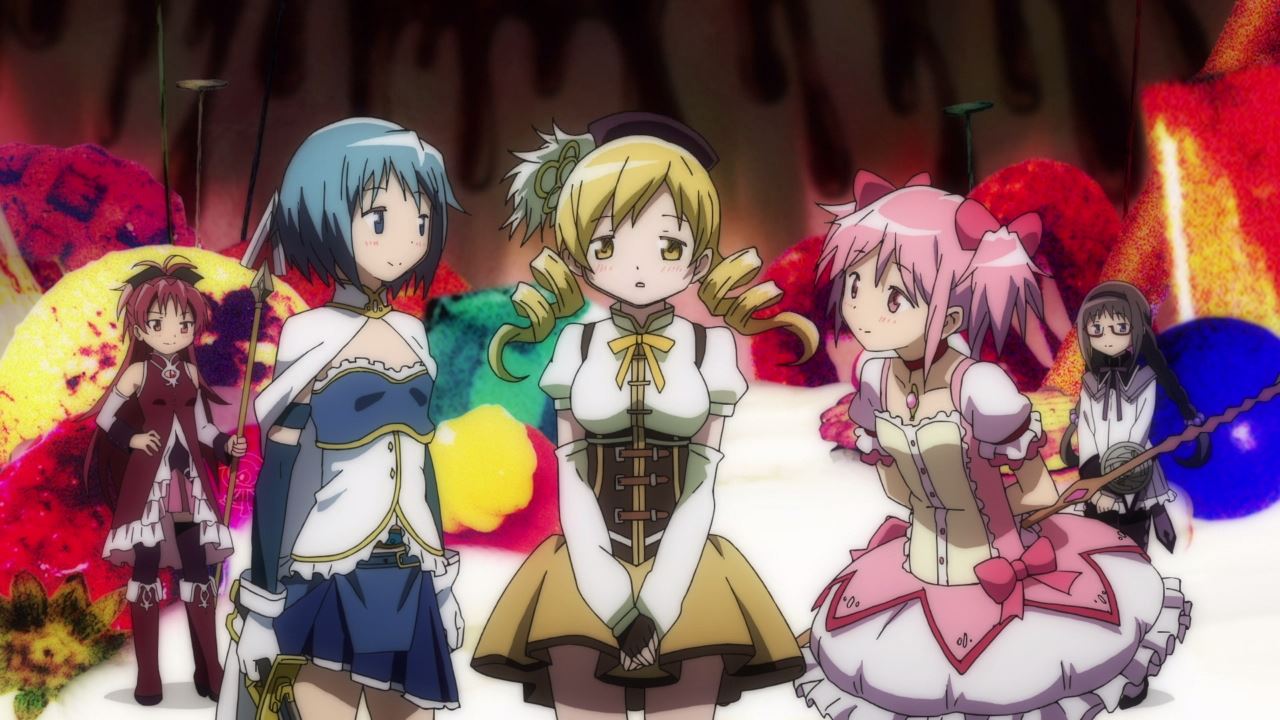 Anyways, they successfully rescued Mami Tomoe from the Uwasa’s influence. Yes, she doesn’t have to lose her head anymore.

Still, the remaining magical girls need to destroy Embryo Eve as it would be bad if Touka Satomi unleashed the artificial witch to take on Walpurgisnacht. 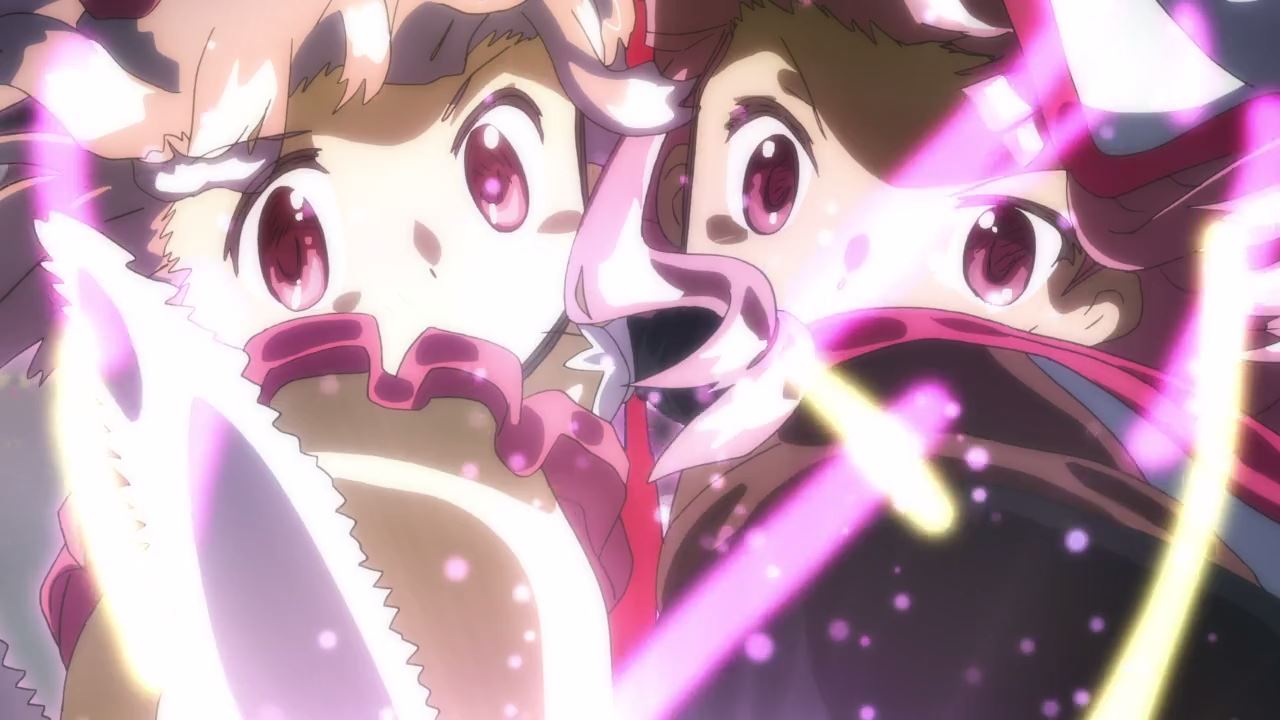 Therefore, it’s up to Madoka Kaname and Iroha Tamaki where they’ll combine their powers to destroy Embryo Eve. Glad to see these two protagonists join forces. 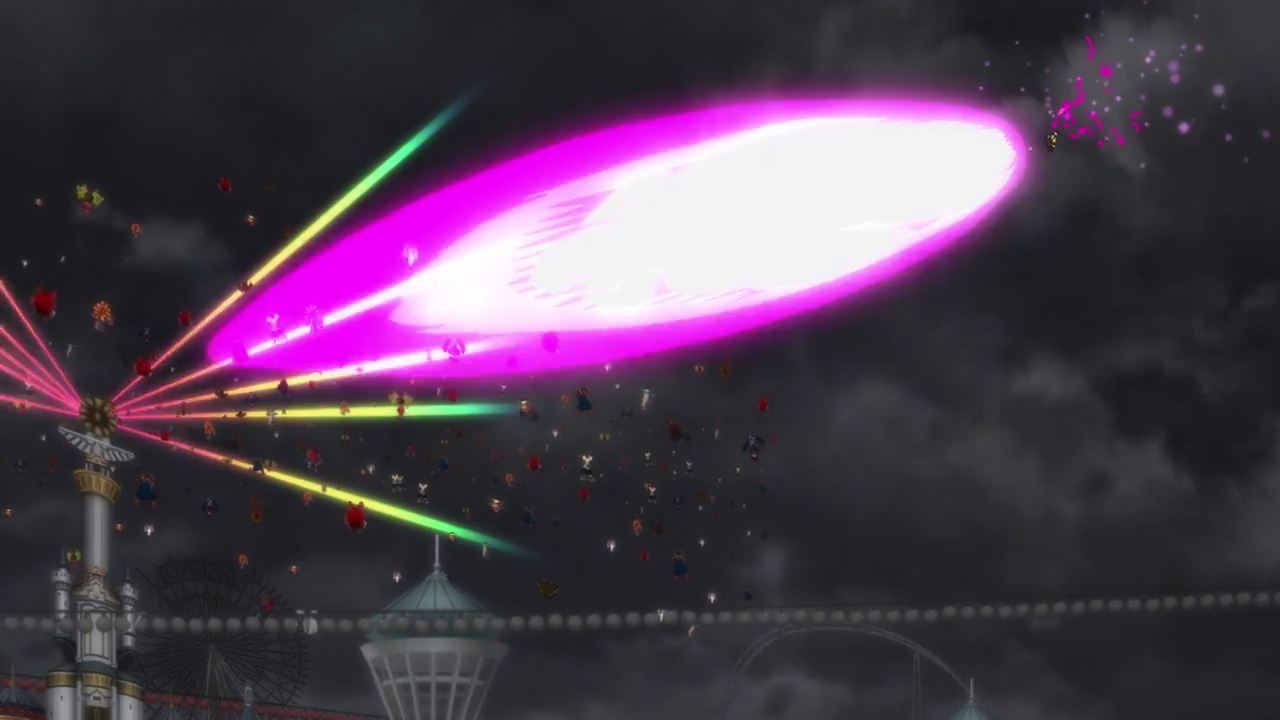 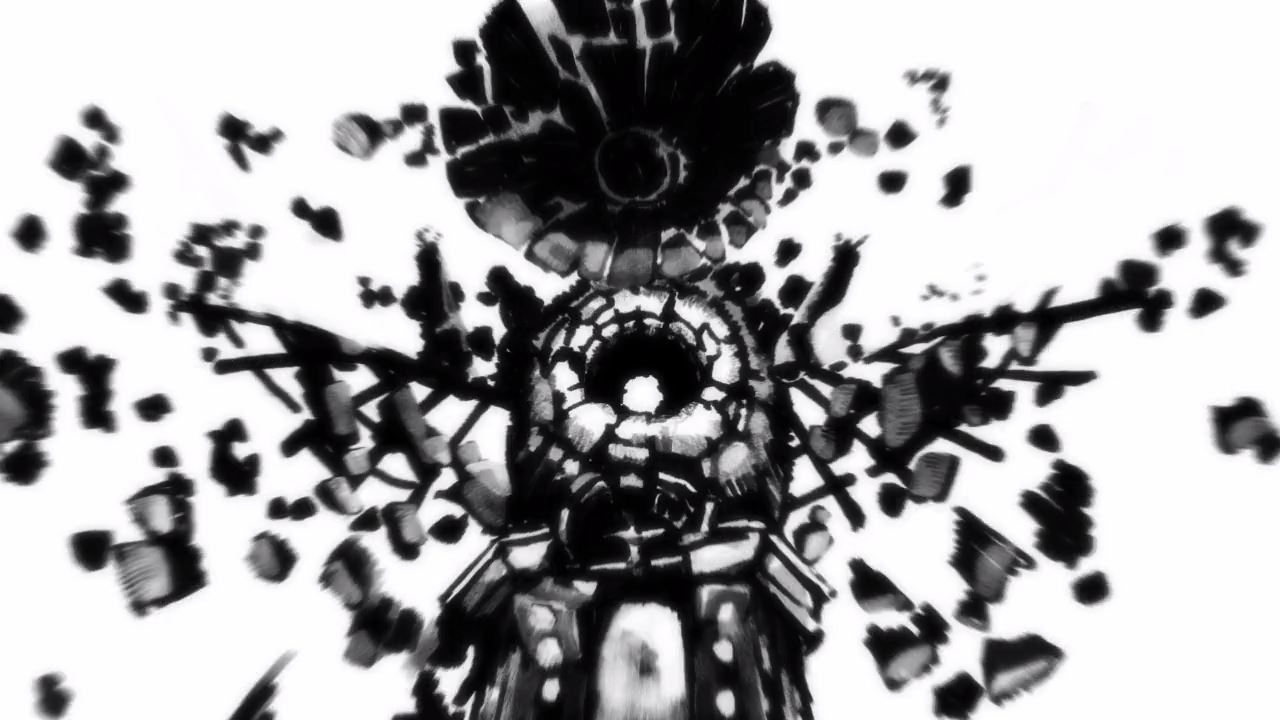 Thanks to their combined powers, Madoka and Iroha completely destroyed Embryo Eve. Man, that’s overkill right there in which they destroyed Magius’ headquarters! 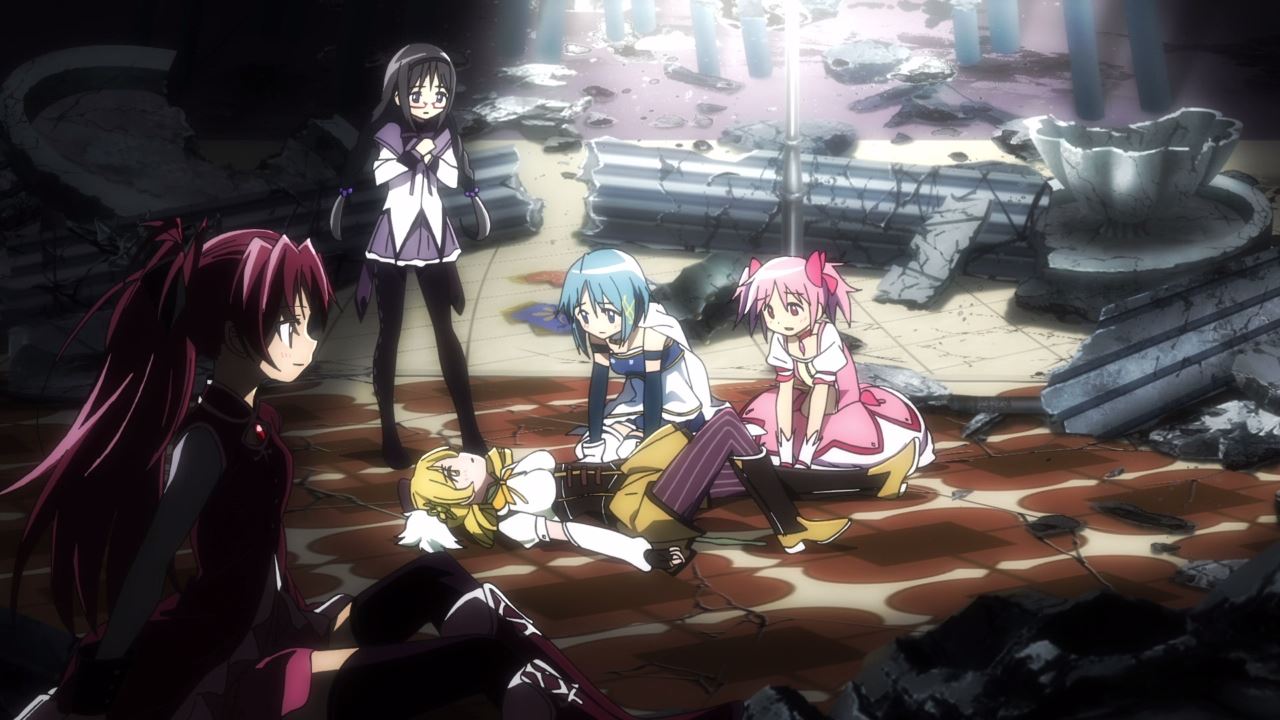 Anyways, looks like they managed to save both Tsuruno Yui and Mami Tomoe from their terrible fate, and destroyed Embryo Eve from its activation. However, it’s not over for Madoka Kaname and her friends as they’ll have to deal with Walpurgisnacht in Mitakihara.

Of course, I wonder if Madoka Kaname decides to sacrifice her life to stop Walpurgisnacht much like in the original series, or Homura Akemi tries to subvert it? I’ll never know for sure… 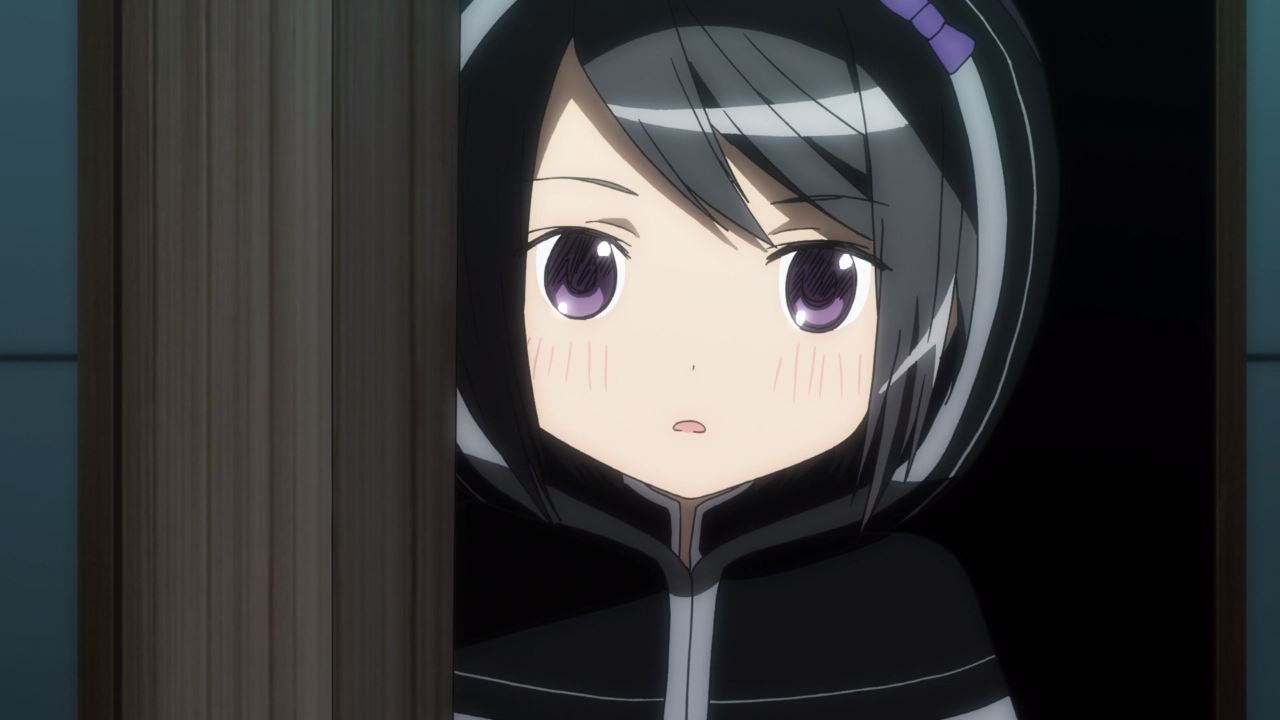 Meanwhile, here’s Kuroe where she finally reached Chelation Land after fending off some hostile magical girls inside Hotel Faint Hope. 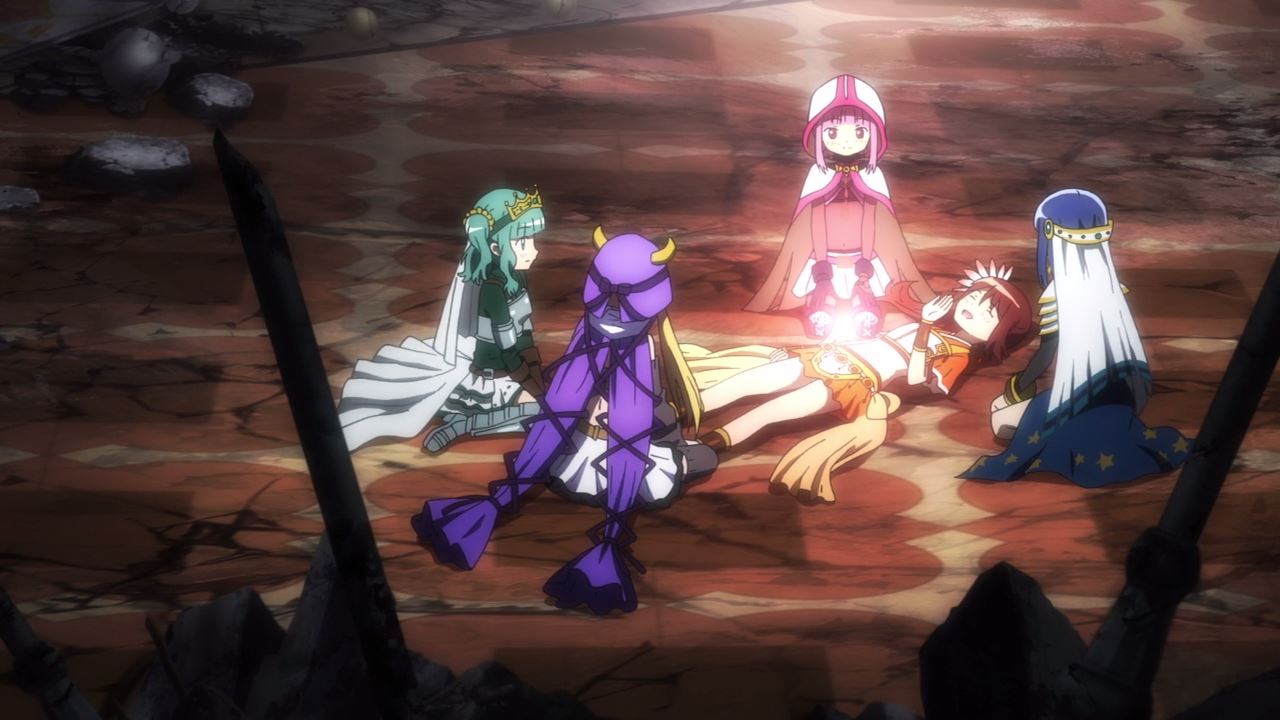 And now, it’s time to meet up with Iroha Tamaki and her friends as Kuroe is a very important ally to the main cast. 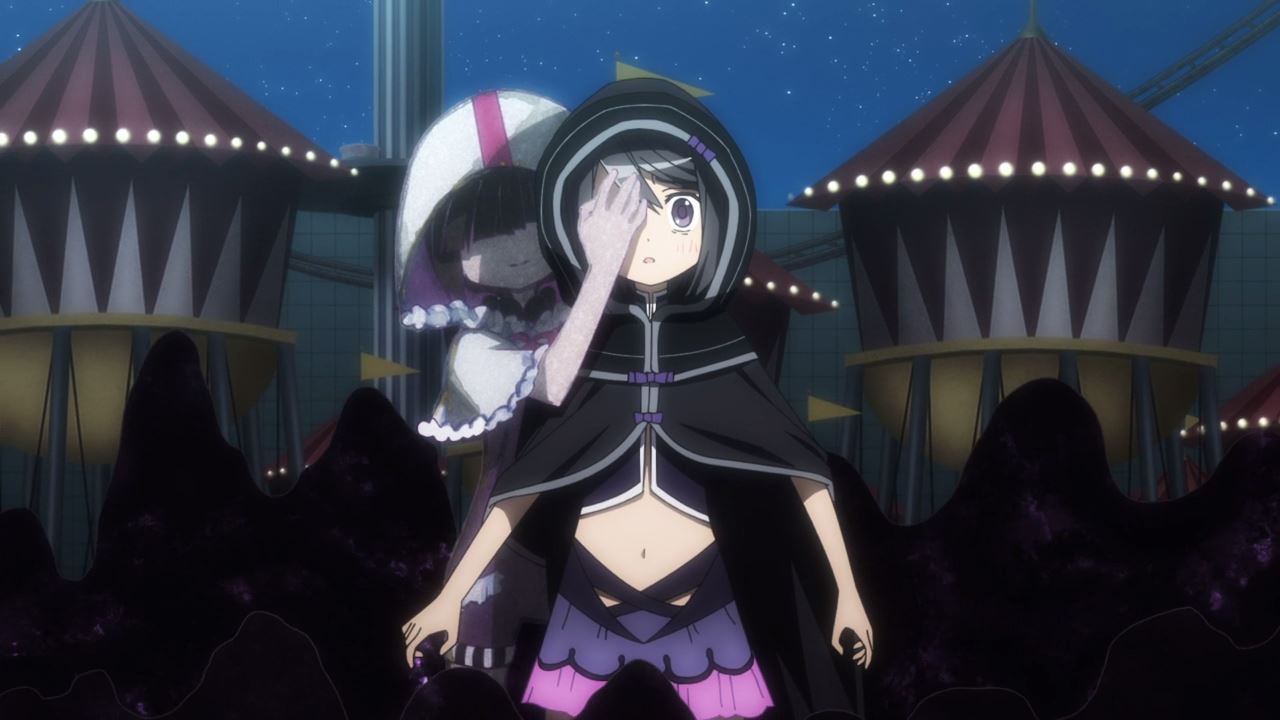 But, it wasn’t meant to be as her inner demons drag Kuroe straight to hell. I have to say that being an anime-original character doesn’t do any favors, and it’s really sad that Kuroe will have to be demoted on the final episode. 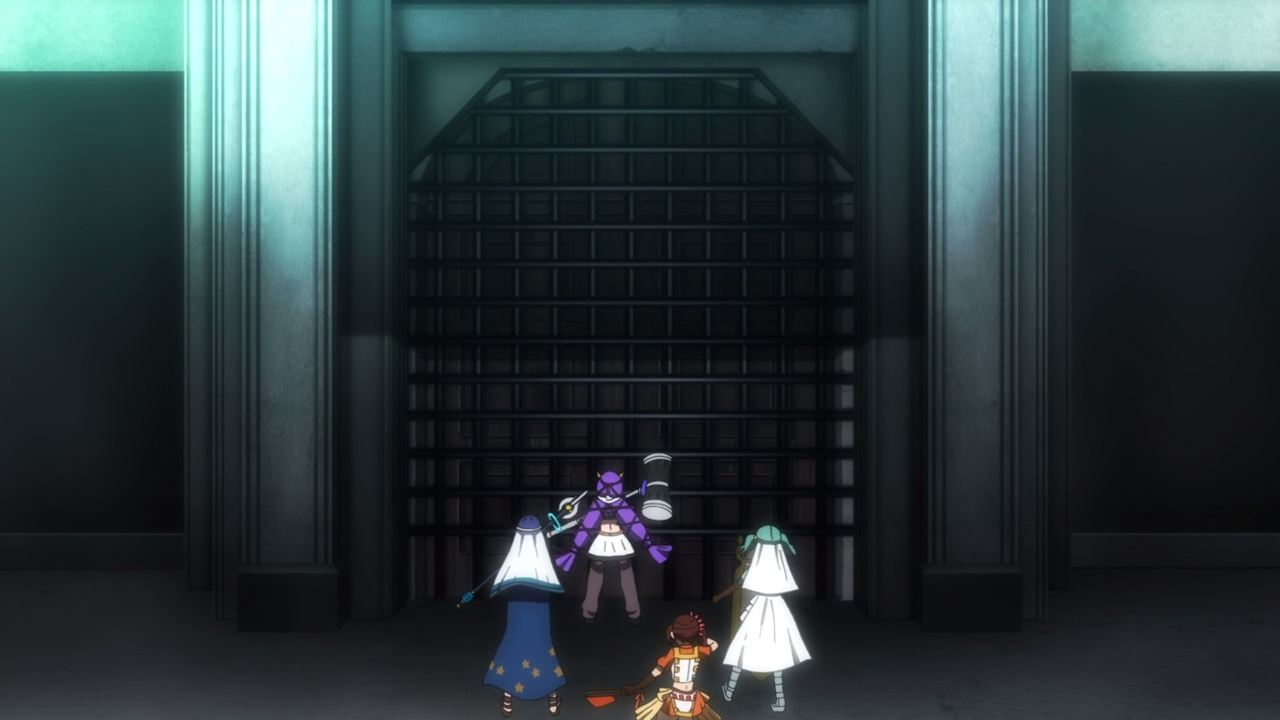 Now then, it’s time for Iroha Tamaki and her friends to confront Touka Satomi and Nemu Hiiragi as they’re gonna put an end to their ambition of saving magical girls through destruction.

However, it looks like Iroha will have to confront the leaders of Magius by herself, leaving Yachiyo and the rest locked out. 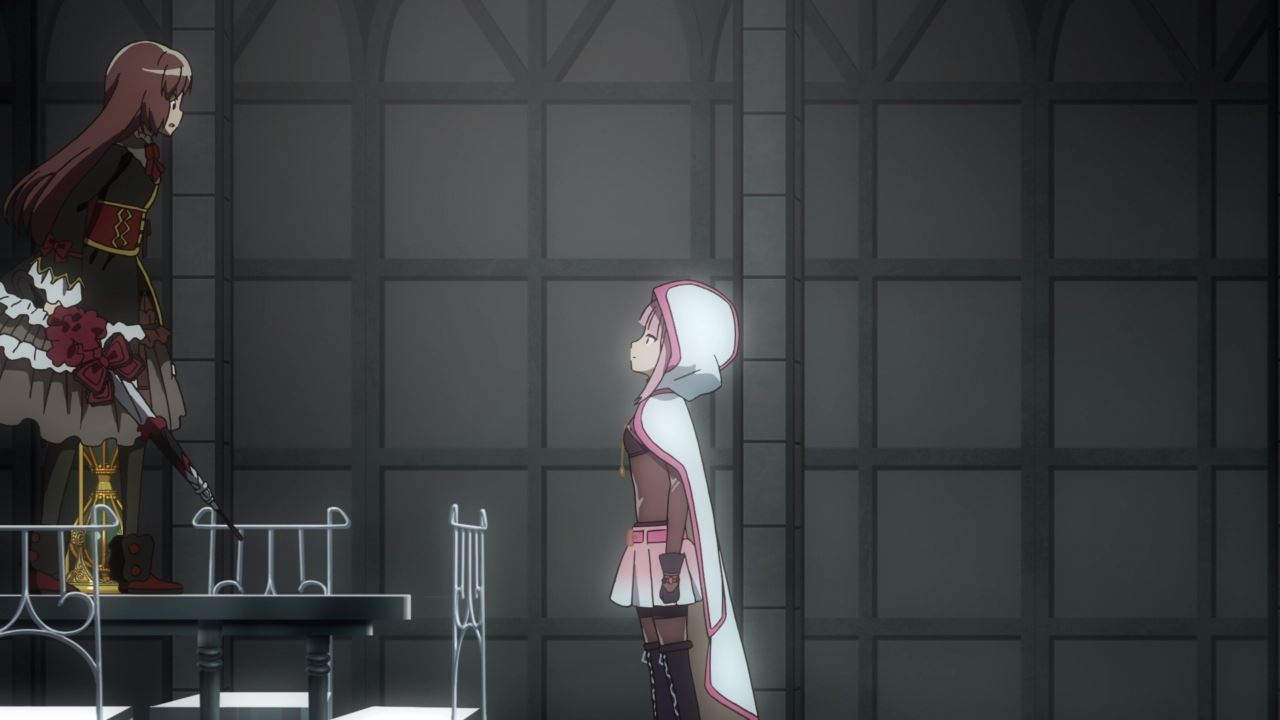 Anyways, Iroha finally met Touka where the former wants answers like Ui’s disappearance. Then again, Touka Satomi won’t talk to an intruder without a fight! 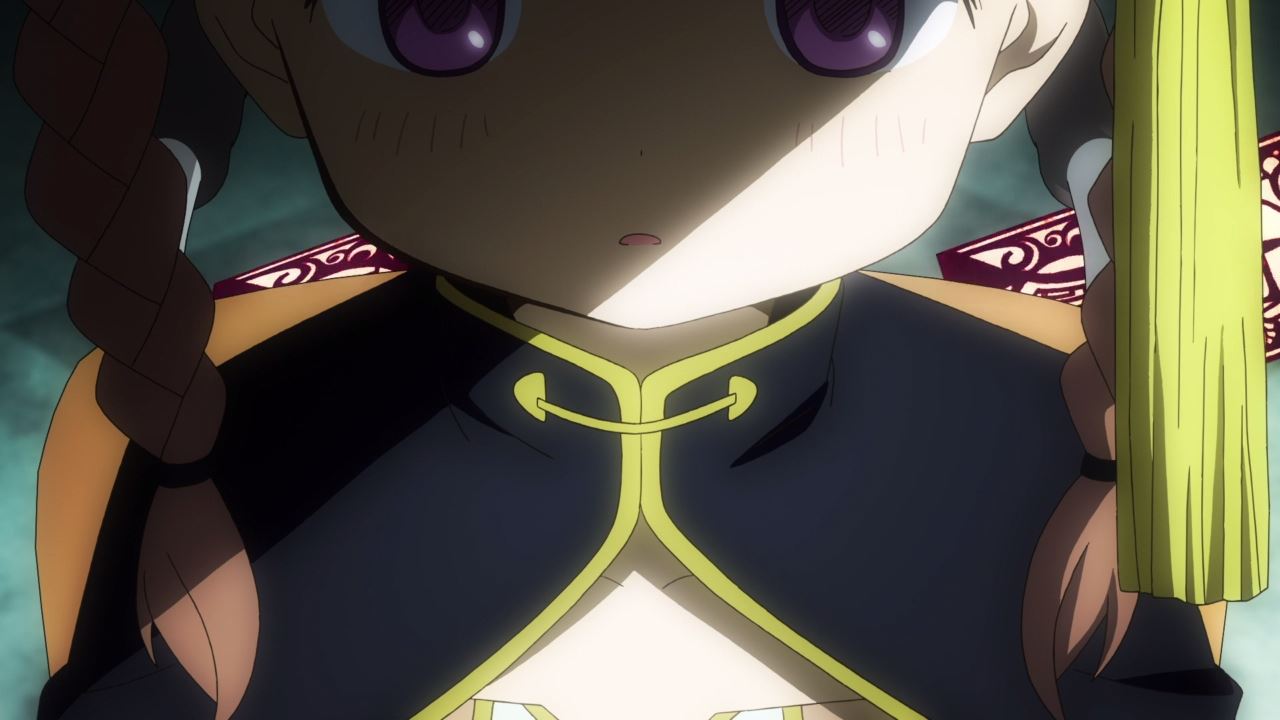 However, their fight was interrupted when Nemu Hiiragi appeared in which she called Iroha as her sister. Wait a minute, is Nemu actually Ui? 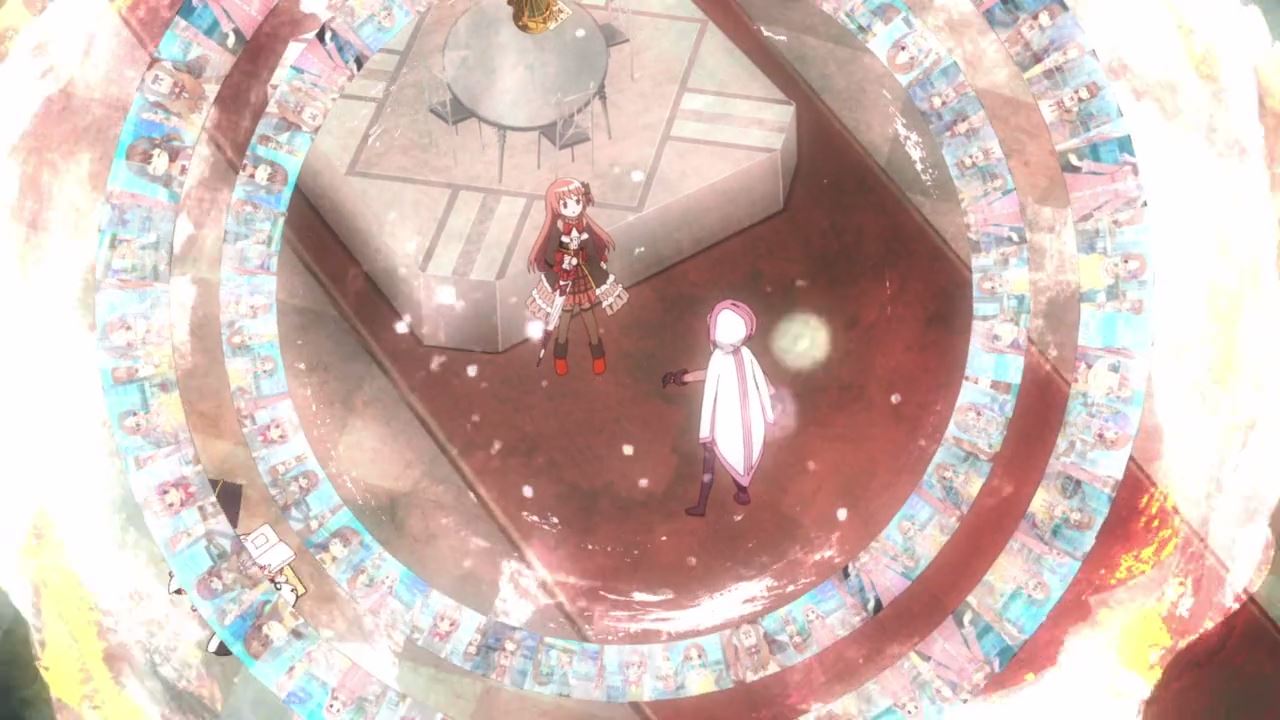 Unfortunately for Touka and Iroha, Nemu restrain them as she wants to tell the entire truth behind Ui’s disappearance. Seriously, why would Nemu Hiiragi trap both magical girls? 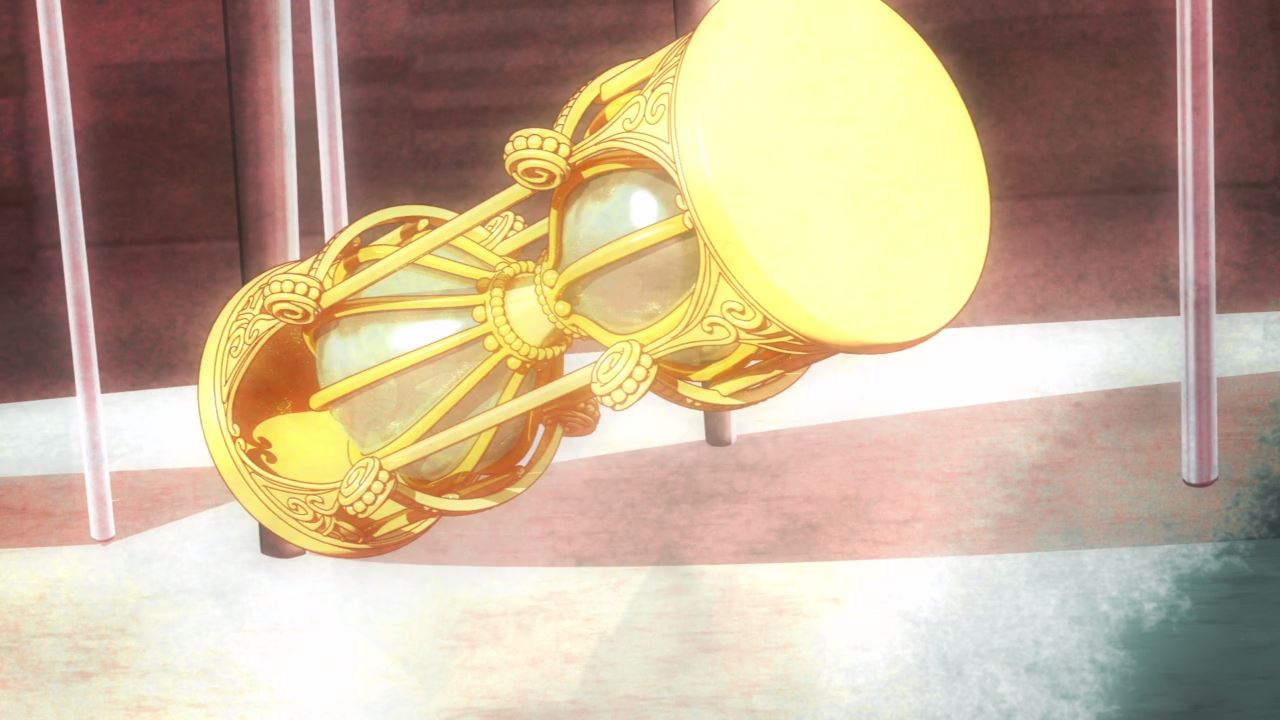 Not only that, but time has suddenly stopped. Not a good way to end the second part of Magia Record!

Anyways, I really enjoyed the sequel as while I’m surprised about Kuroe’s reappearance, I’m happy that Yachiyo Nanami and Iroha Tamaki managed to bring the team back together instead of being Magius’ pawns for life. Still, there are questions remained unanswered like what’s the solution on saving magical girls from being stuck in their Doppel forms, Elina Grey’s ulterior motive, the list goes on.

Meanwhile, I’m glad that the cast from the original Madoka Magica show appeared to help the cast of Magia Record, although I’m still suspicious towards Homura Akemi where she might be aware of the multiple tragedies involving Walpurgisnacht. I mean, the events from the Rebellion movie cast a shadow of a doubt towards Homura. Sadly, they won’t appear on the next part of Magia Record which I believe that it’ll air in December 2021.

With that said, I don’t like how the second part of Magia Record ended on a cliffhanger. But I’m hoping that the 3rd part of this spin-off series will wrap any loose ends.