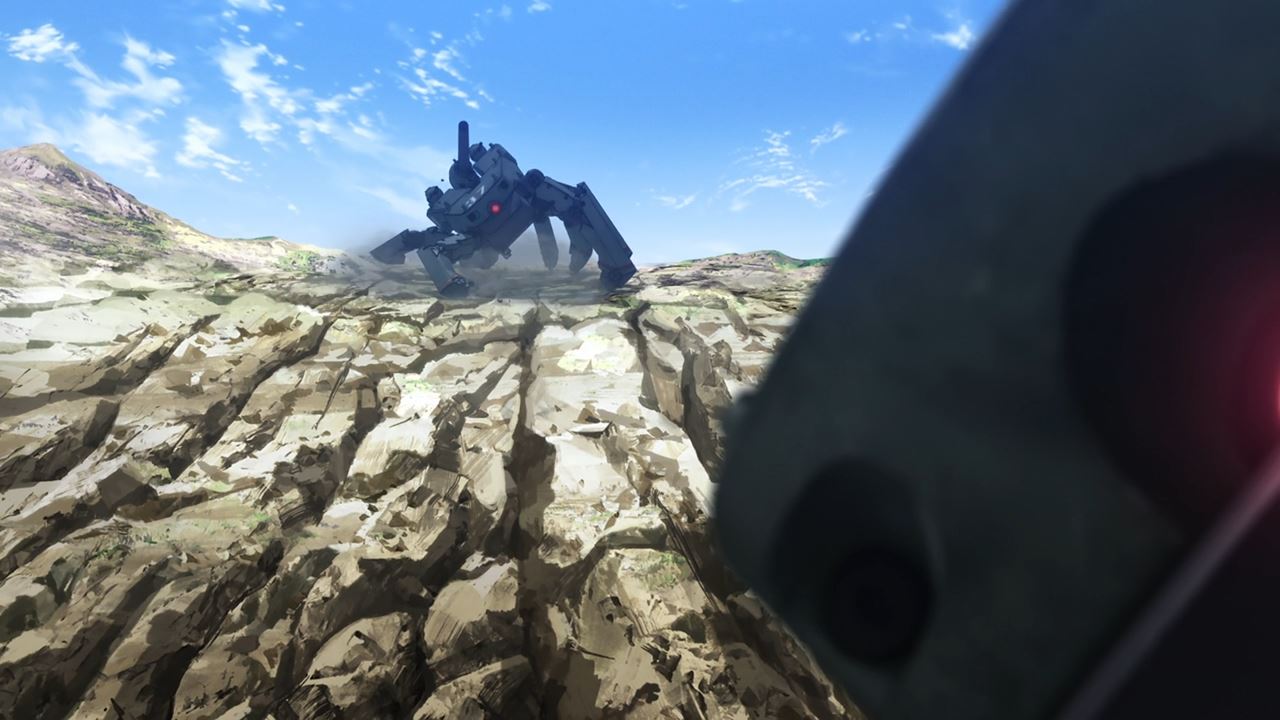 Well look what we have here, someone tries to sneak up towards the enemy, but fell down towards the hill like an idiot. It’ll be bad if someone would make a blunder during an actual battle against the Legion. 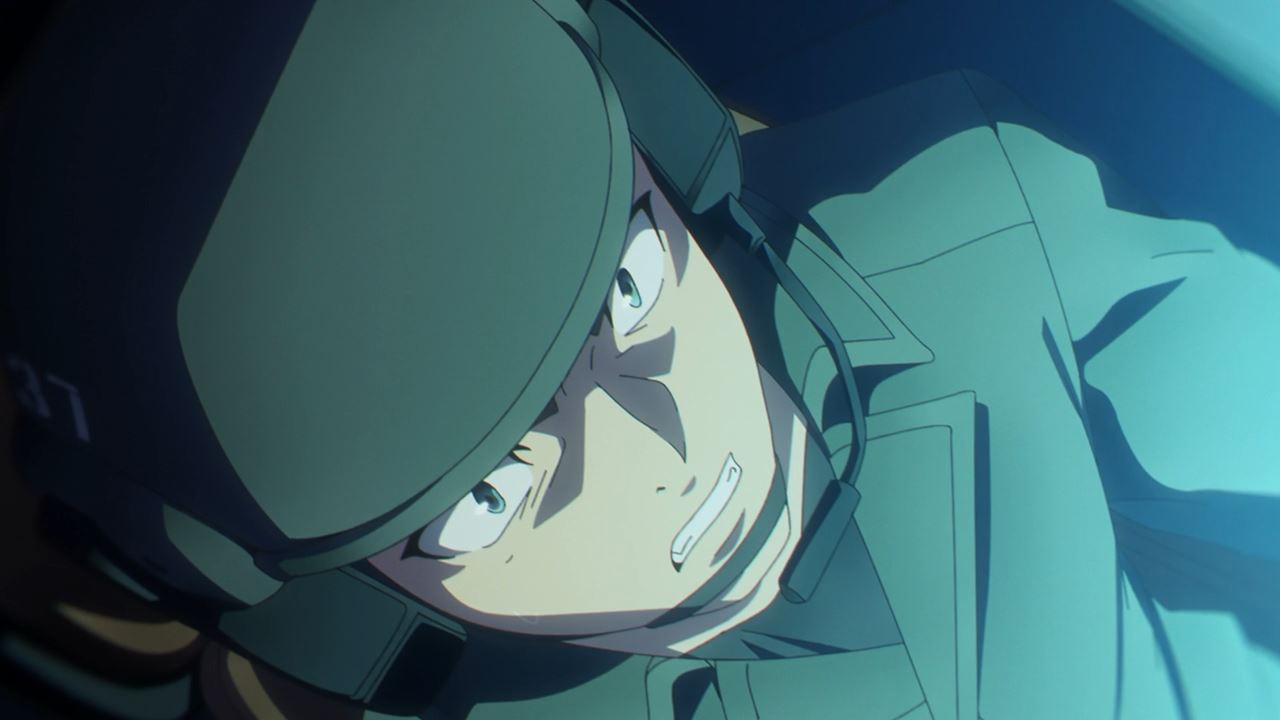 Oh yeah, this is Erwin Marcel where he made a blunder that might costs his head. C’mon, if his Vánagandr got wrecked, Marcel is screwed! 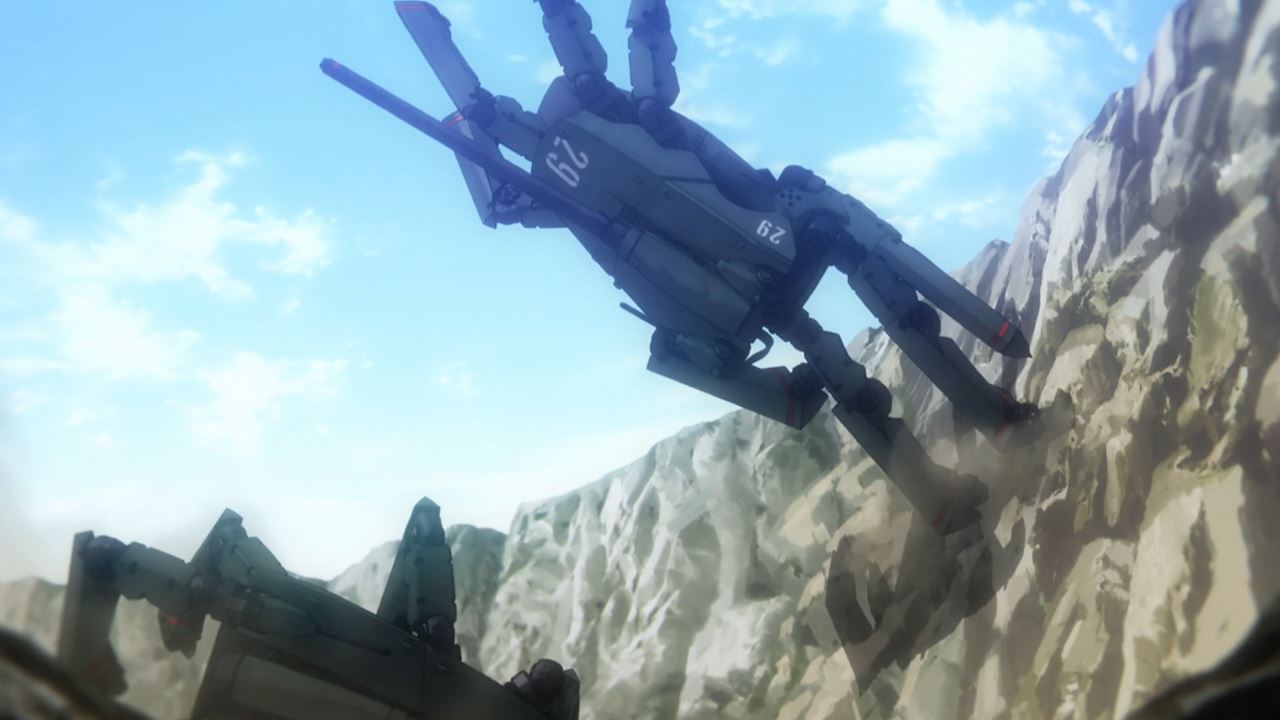 That’s until another Vánagandr backflipped which prevents collision between two mechas. Oh by the way, Giad’s mechas are called Feldreß. 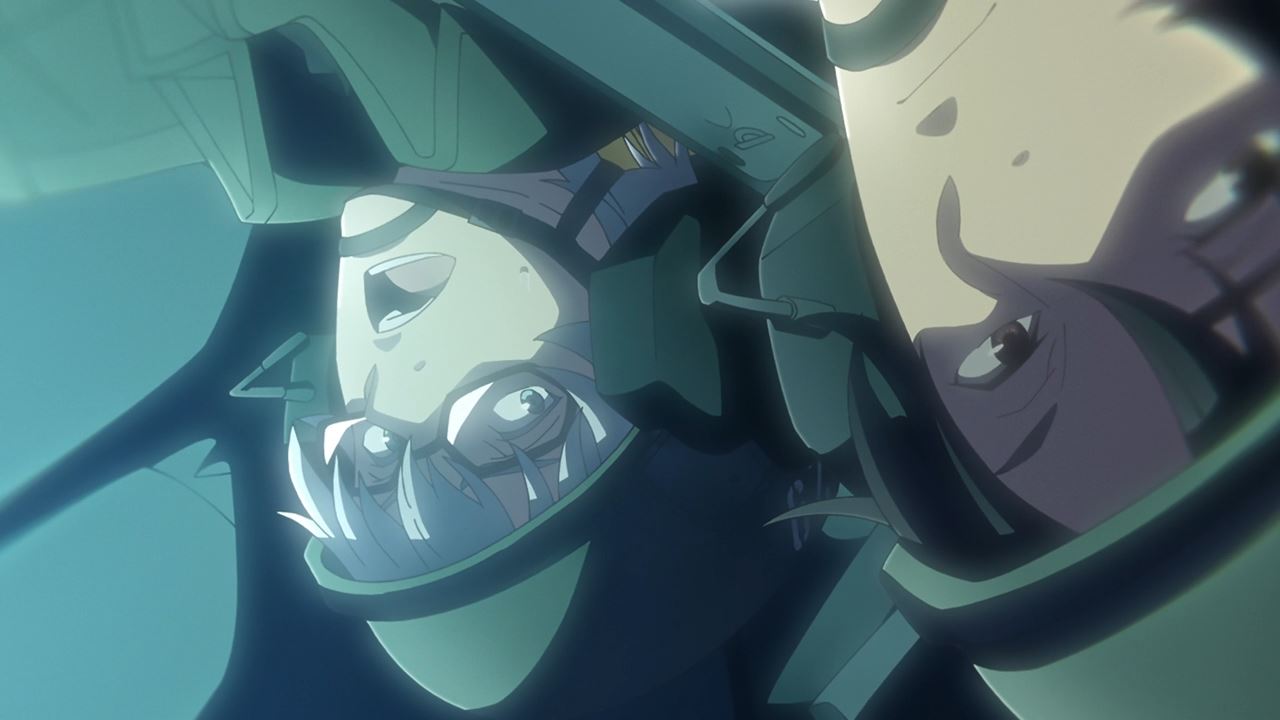 Oh, and here’s the pilot of the Vánagandr where Shinei Nouzen pushed the M4A3 Vánagandr to its limits. I guess his piloting skills are still intact and I’m quite impressed on how Shin maneuvered a somewhat heavy mecha. 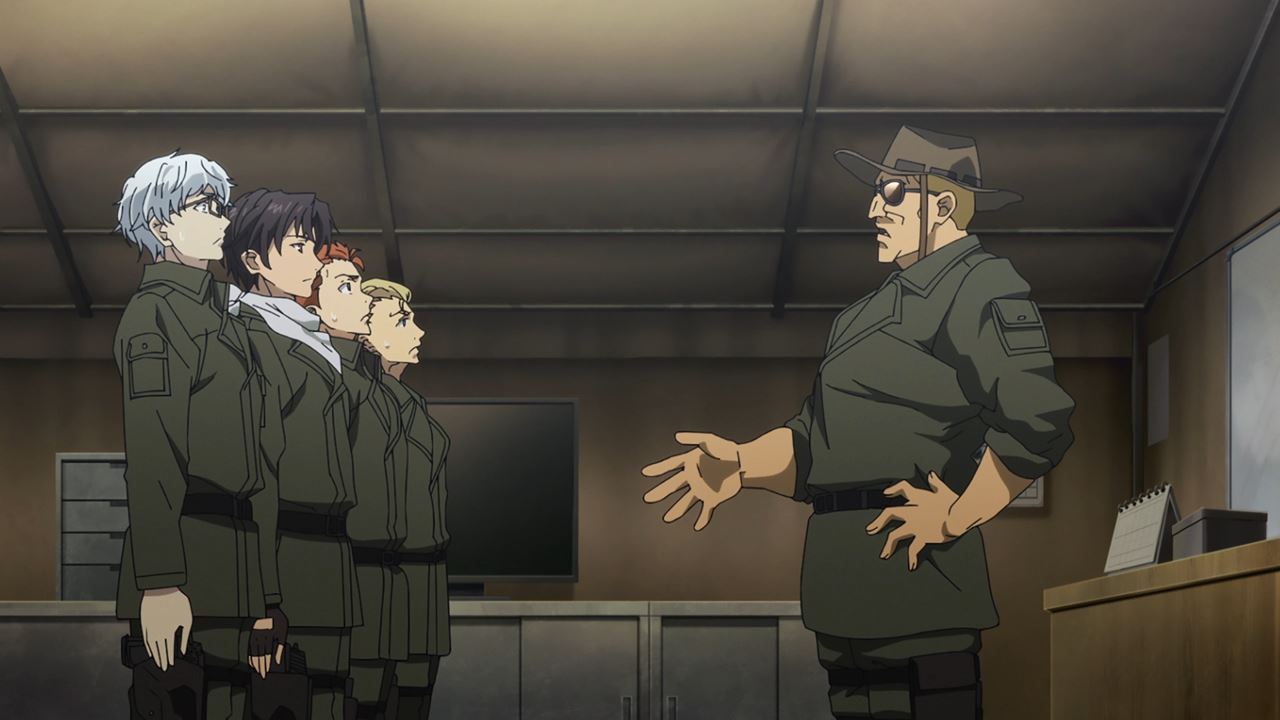 Then again, the nasty instructor reprimanded the cadets from doing dangerous maneuvers that they might potentially get themselves killed in an actual battle. Then again, Shinei managed to prevent a head-on collision.

Anyways, looks like these cadets will have a long time learning at the special officers’ school until they’ve graduated. 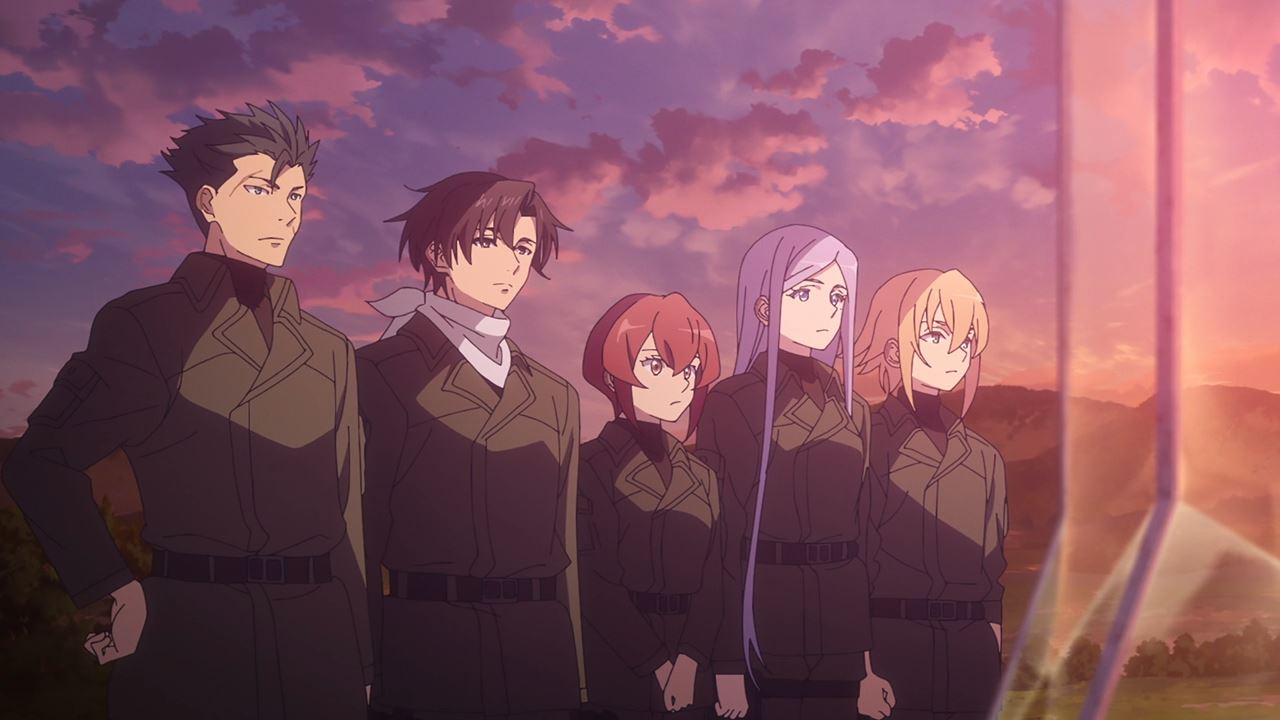 Fortunately, most of the cadets, including the surviving members of the Spearhead Squadron, managed to graduate with flying colors as they saw something interest atop of a hill. 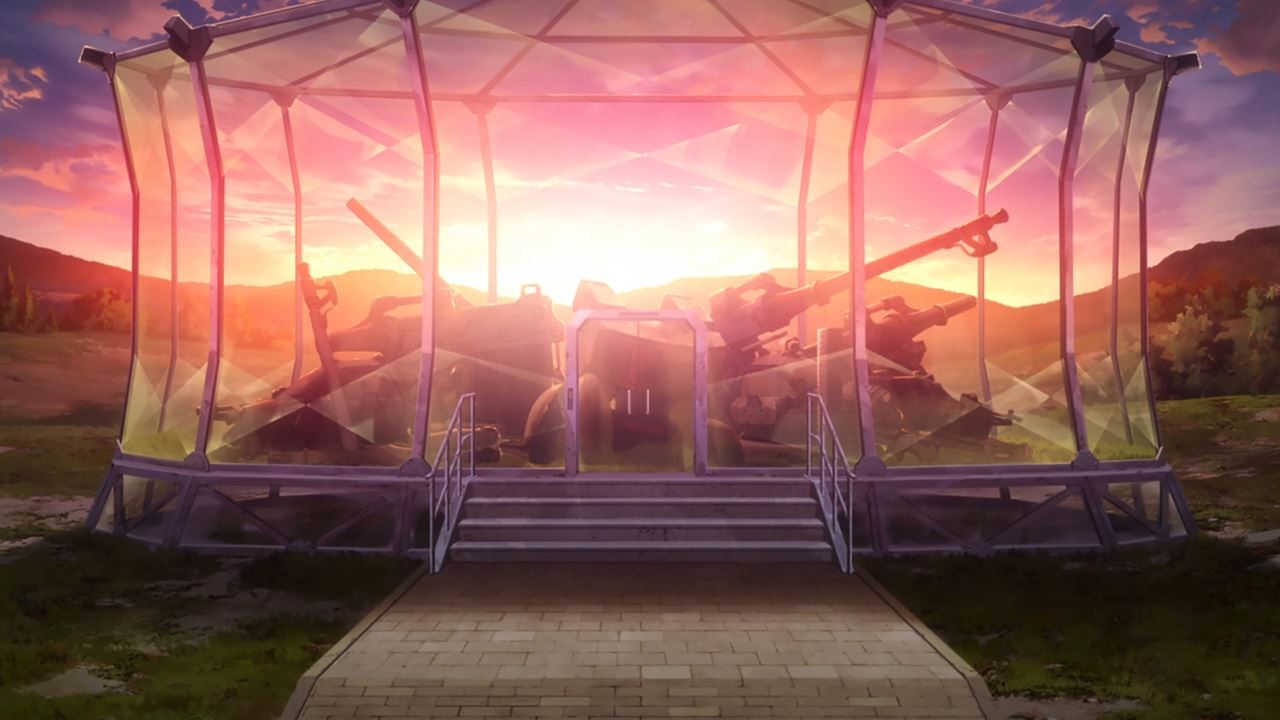 This is a memorial where 575 Eighty-Six soldiers died in battle. Looks like they managed to get Shin’s box full of nametags and bury it to its resting place. How nice of them! 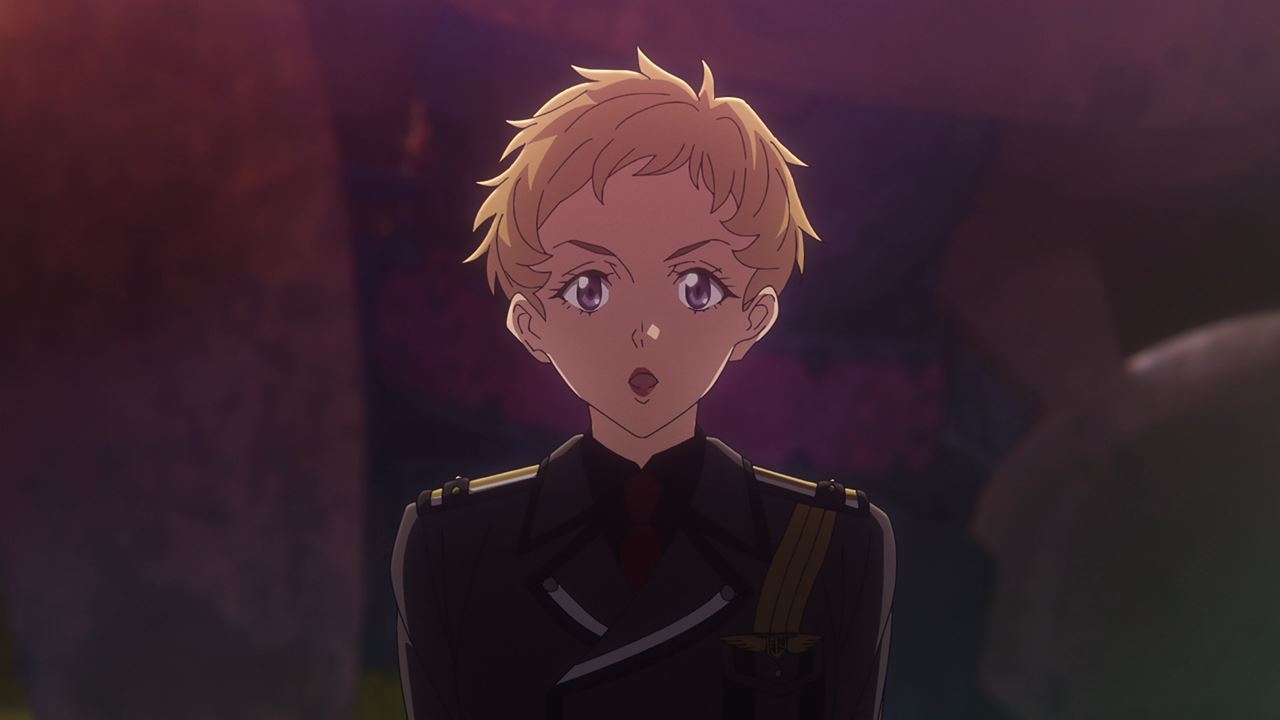 By the way, this is Lt. Colonel Grethe Wenzel where she serves as the commander of 1028th Test Unit. One more thing, Lt. Colonel Wenzel has a surprise for Shinei and his friends. 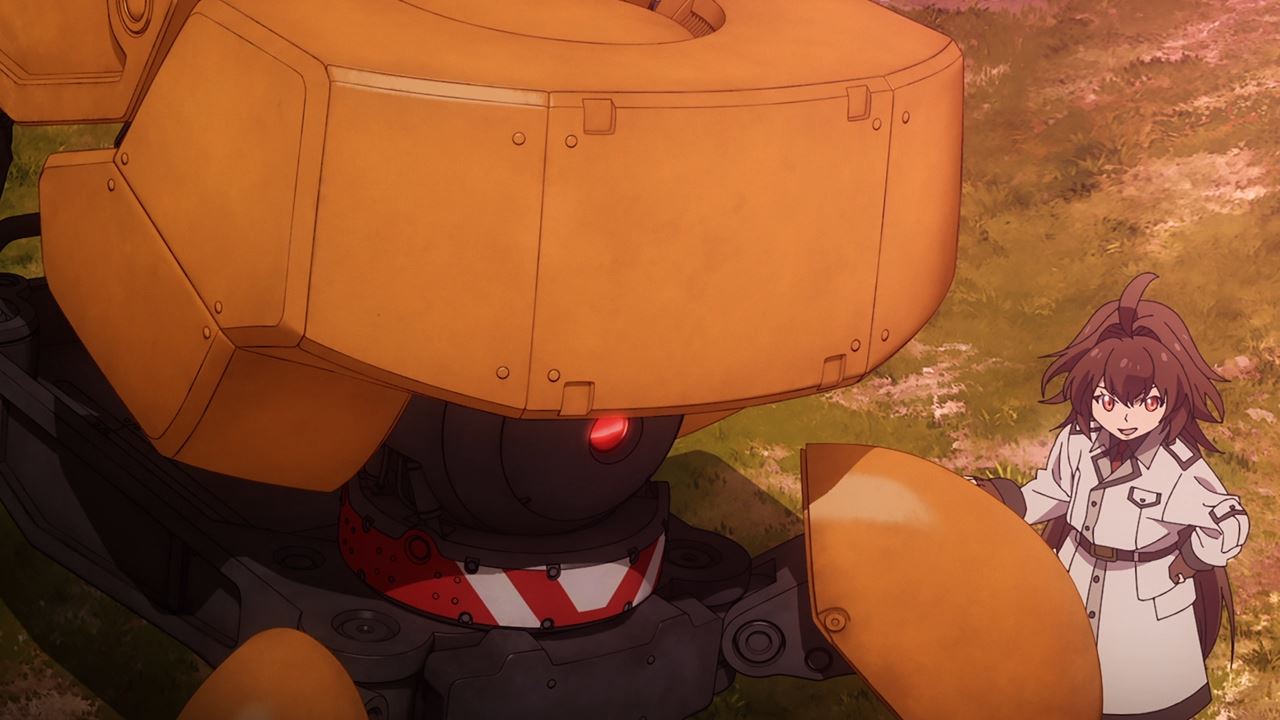 You see, Grethe and her engineering team managed to revive Fido, the support mecha of the Spearhead Squadron in which the engineers managed to take out its core unit and put into a new body.

Really happy that Shin’s pet robot is revived as I’m hoping that Fido will serve him and his buddies. Of course, Fido is not the only one that Lt. Colonel Grethe Wenzel created. 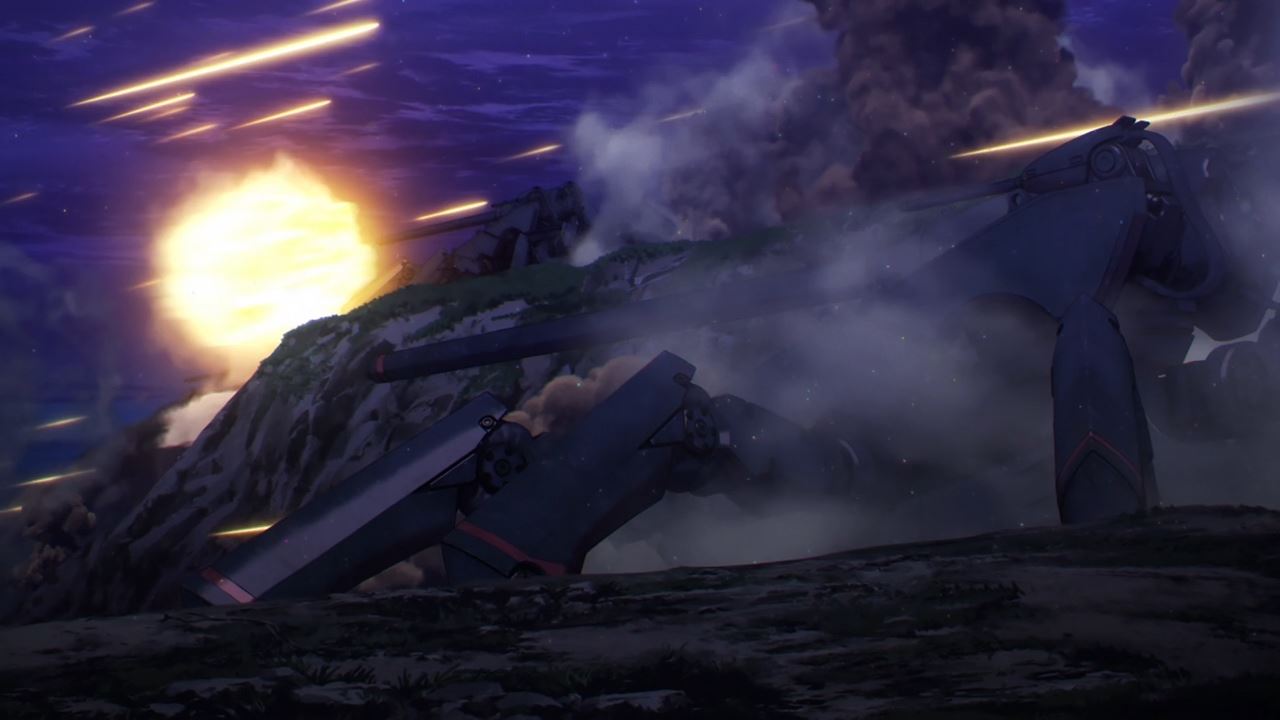 But let’s move onto the battlefield where the Federal Republic of Giad are fighting against the Legion, although they’re being outgunned by powerful models within the Legion’s ranks. 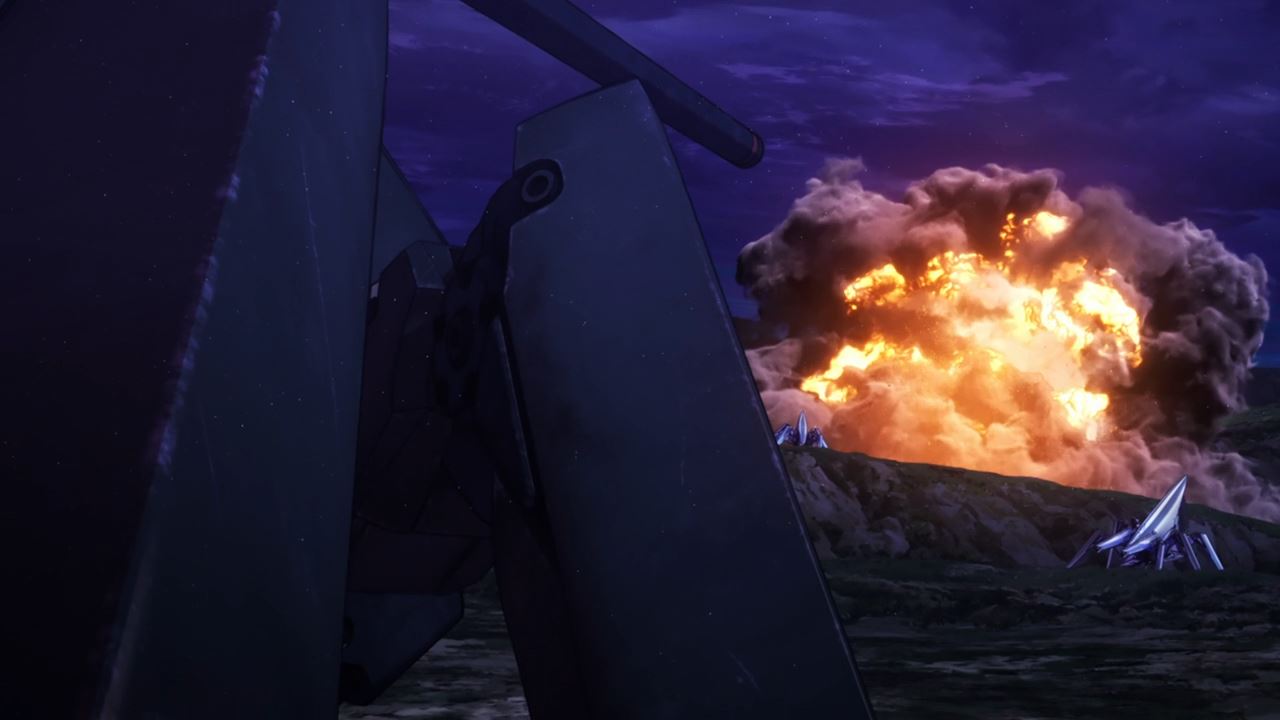 Fortunately, help has arrived but the Giad soldiers are terrified of what they saw amidst the pile of Legion carcasses. 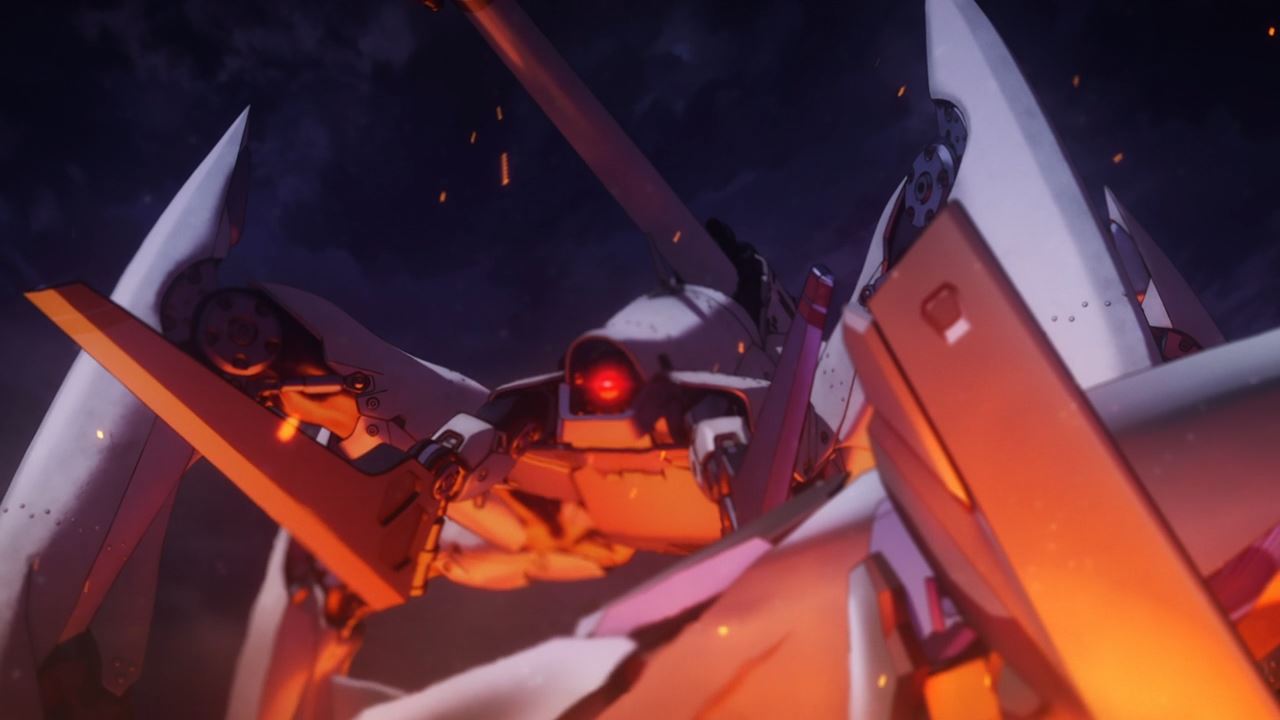 Turns out that their reinforcements happened to be the newest machine created specifically for the survivors of the Spearhead Squadron: The XM2 Reginleif.

Created by Lt. Colonel Grethe Wenzel, the Reginleif was made as the successor to the Juggernaut. It’s faster, tougher, and heavily-armed than San Magnolia’s shoddy machine.

Well then, I’m glad that Shinei Nouzen is back in the battlefield, although he should take it easy since the Reginleif is still in its prototype stage. 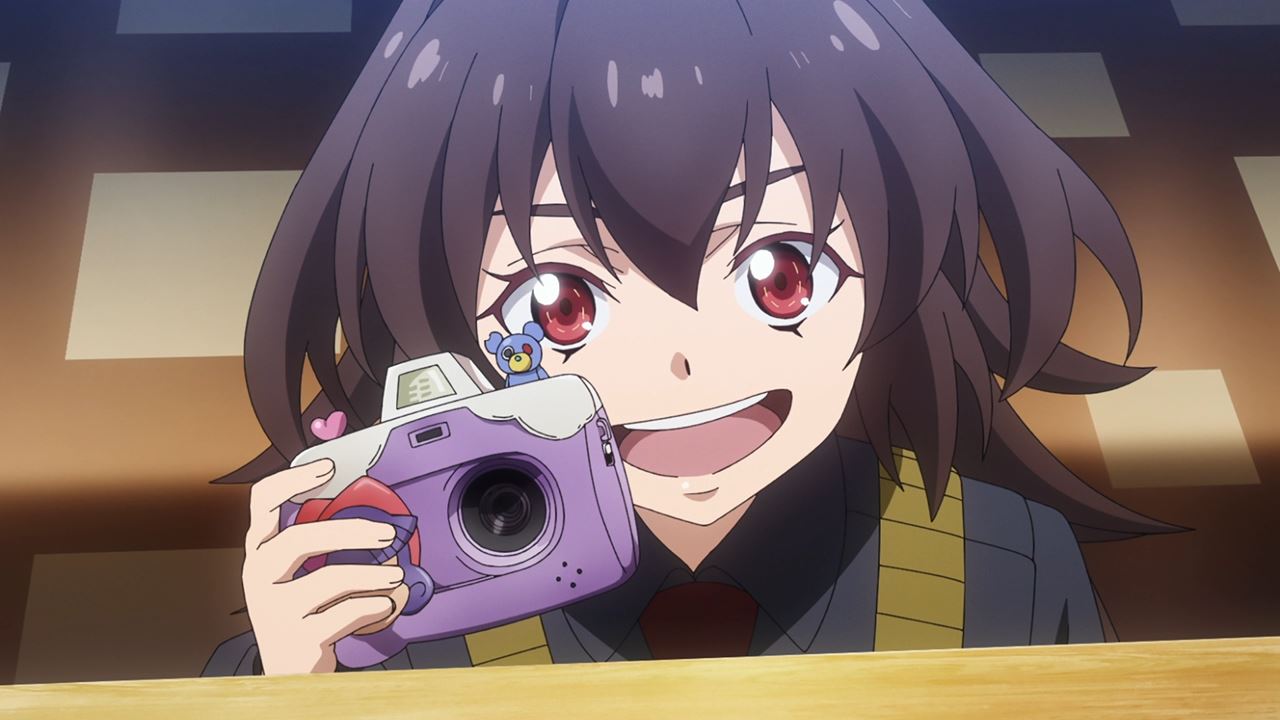 One more thing, here’s Frederica Rosenfort (or Augusta Frederica Aldel-Adler) which serves as the mascot to the Giad military. She might look cute, but Frederica won’t do anything but giving some emotional support. 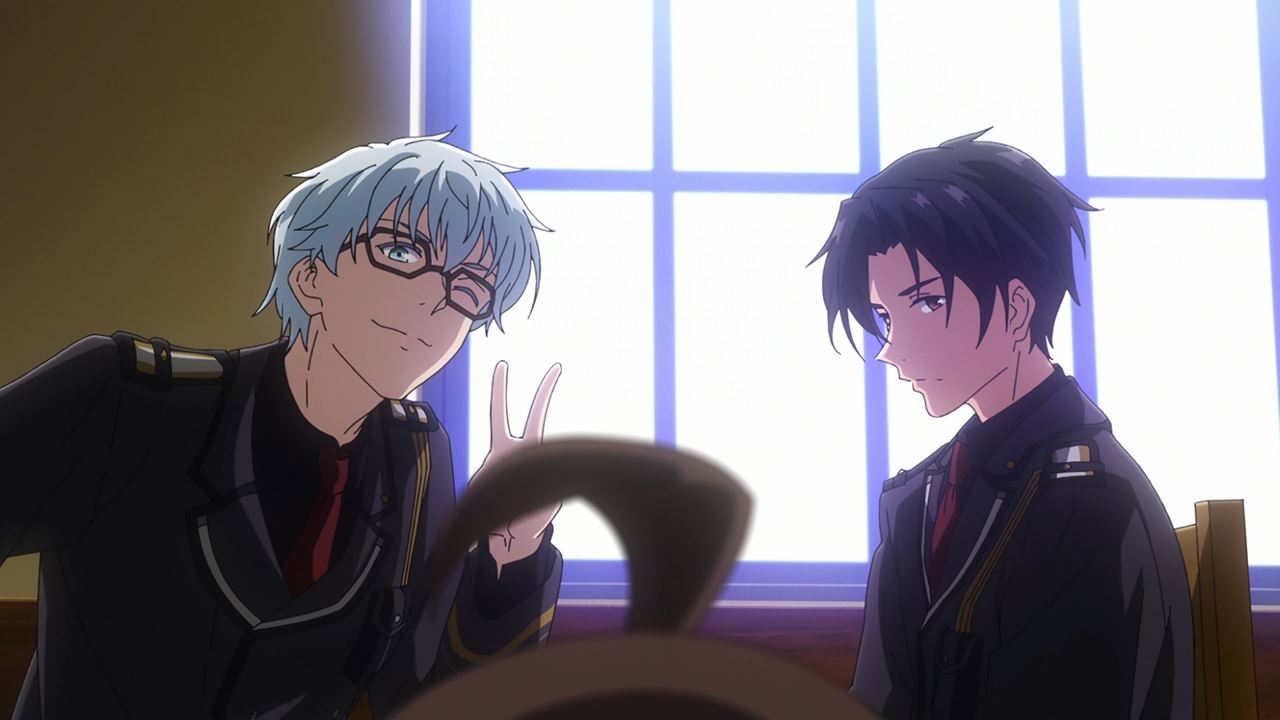 With that said, Frederica will take a picture of both Eugene Rantz and Shinei Nouzen. Although Shin doesn’t talk much about his life, Eugune wants to give a better life to his sister now that he’s in the military. 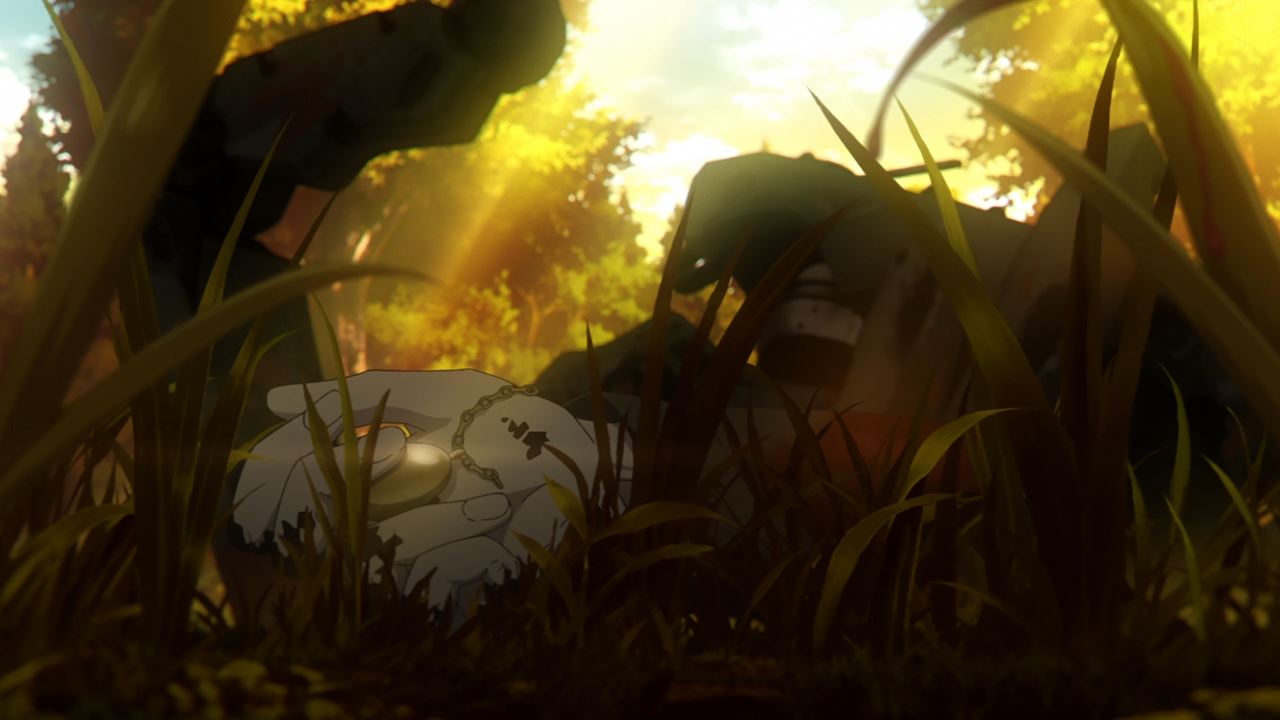 Unfortunately, his plans to take Nina to an amusement park or a prestigious school has dashed as Eugune met a terrible fate.

And here’s Eugene Rantz where he told Shinei Nouzen to pick up his pendant which contained a picture of Nina.

Honestly, I feel bad that Eugene is dying in this state. He could have lived to see Nina again after the war. As for Shin, it appears that he has no other choice but to shoot Eugune to the head. It’s better this way than being captured by the Legion. 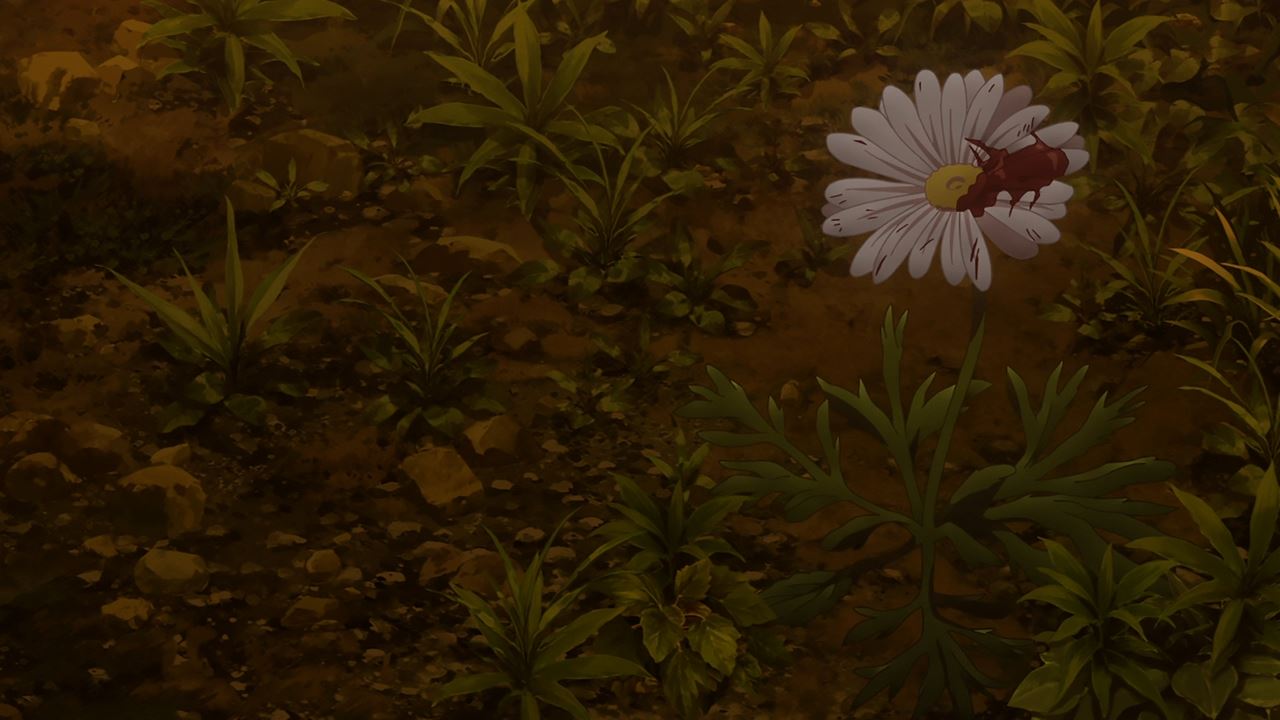 Anyways, Eugene Rantz has died in battle. He might have fought bravely, but the Legion is still stronger in which Eugene’s willpower isn’t enough to defeat the enemy. 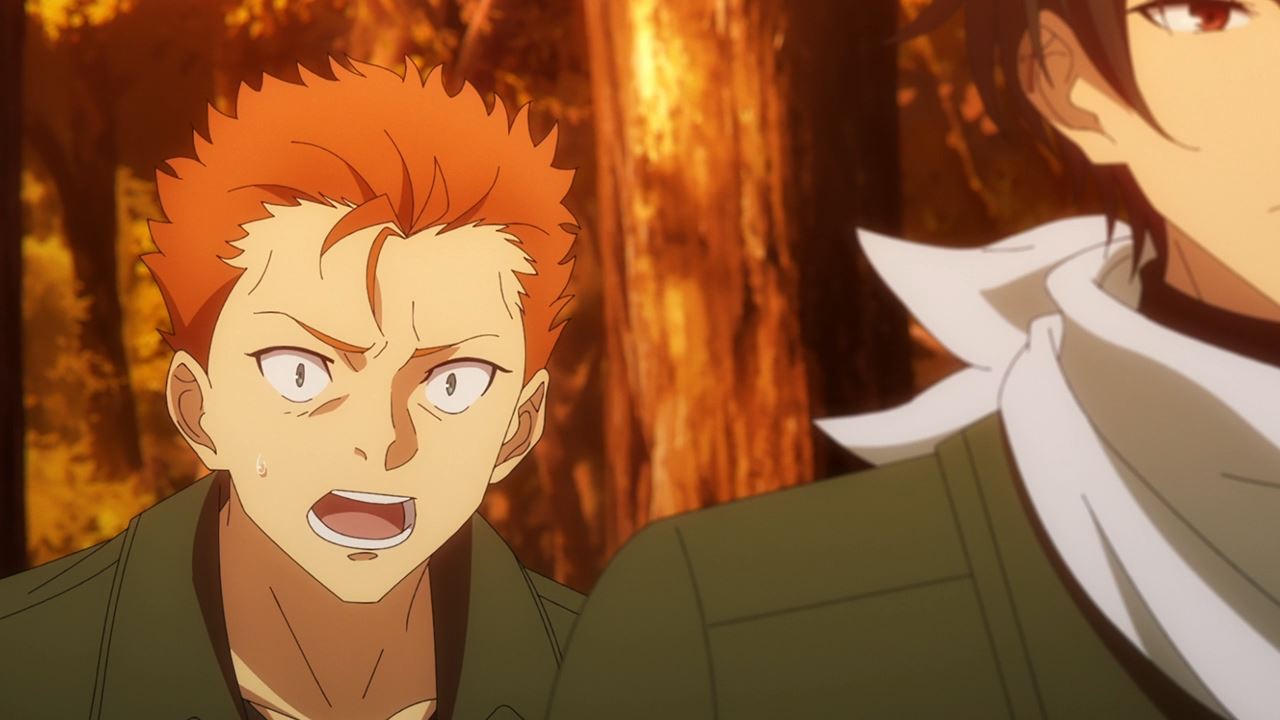 One more thing, here’s Erwin Marcel where he called Shinei out for executing his ally. But to be fair, Shin is doing it so that Eugene won’t become a Shepherd which would affect everyone who encounter him as an enemy. 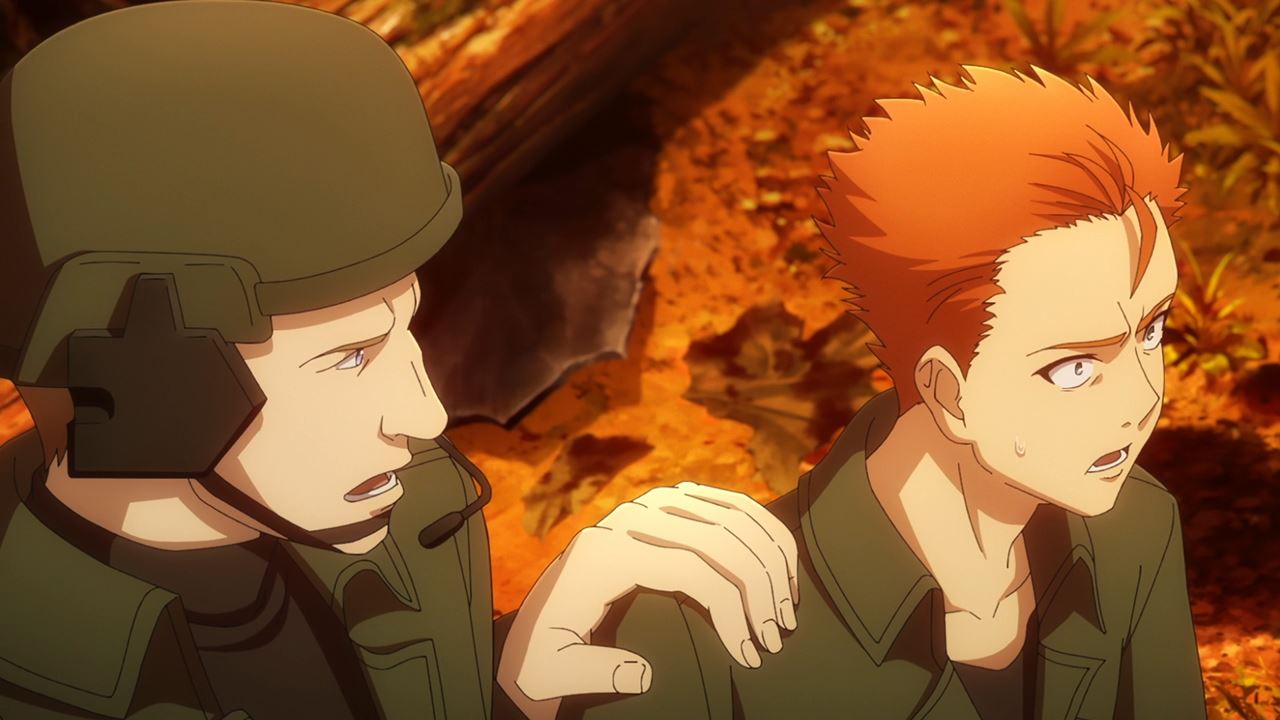 Meanwhile, here’s Brent Bernholdt where he told Erwin Marcel to stop it as there’s nothing they can do.

Also, Brent told Shin that he still have time to leave the military and have a normal life, although the Undertaker decided to continue fighting since he’s born in the battlefield. 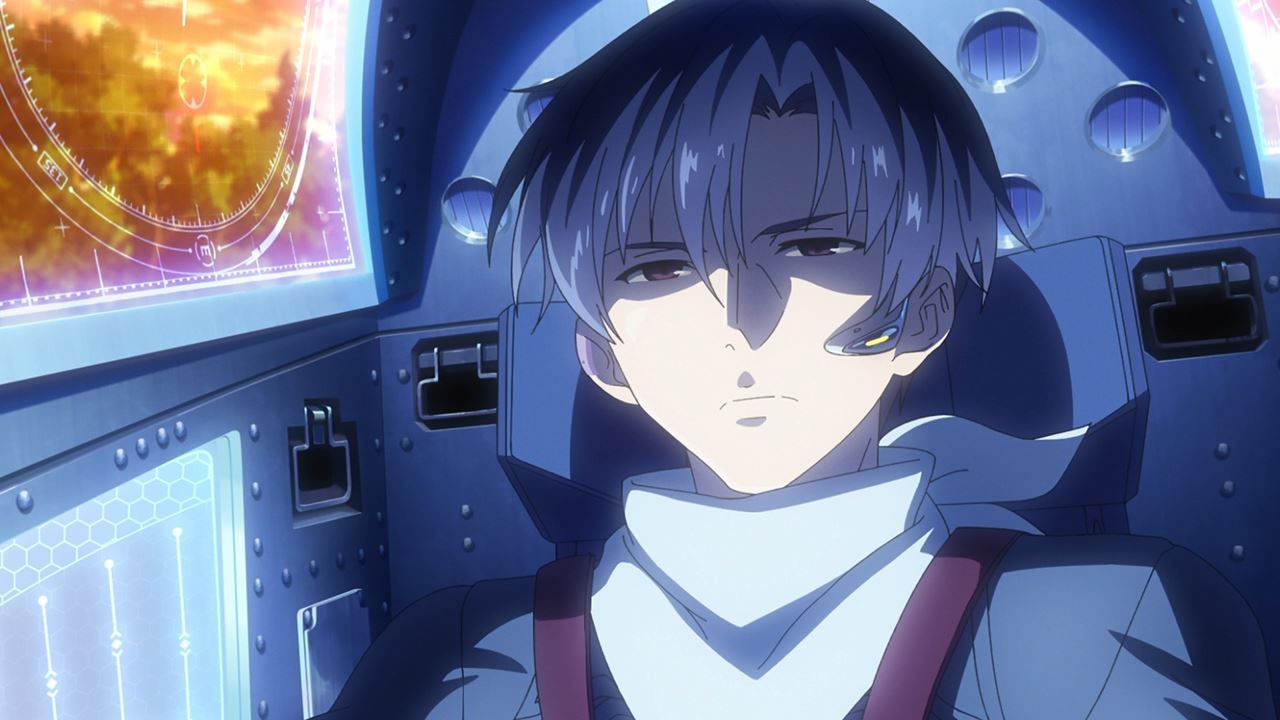 But that’s the end of this week’s episode and while the Undertaker has returned stronger than ever before, it’s sad that a tragedy happened towards his new friend Eugene Rantz.

Now then, I’m hoping that the next episode will move back to San Magnolia to see if Vladilena “Lena” Milizé and her squadron are still around.