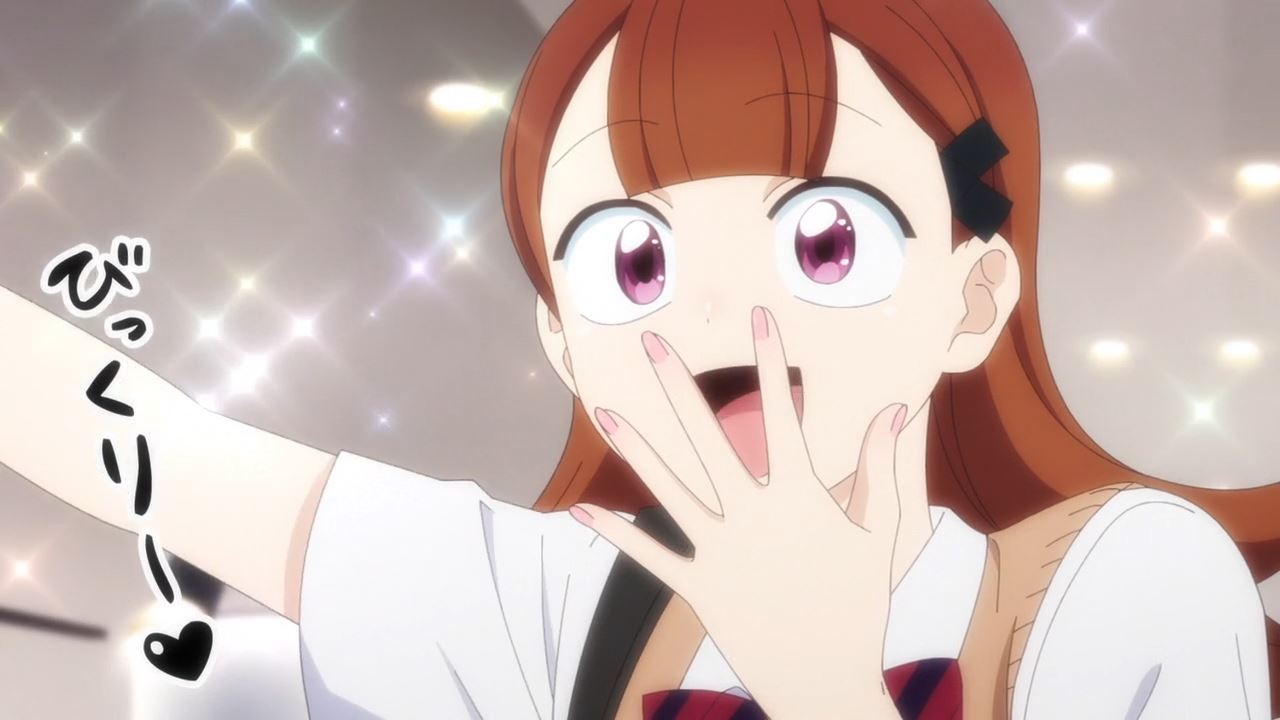 This is Ren Yamai where she’s happy to see Shouko Komi at a mall. C’mon, it’s just a coincidence meeting her goddess. 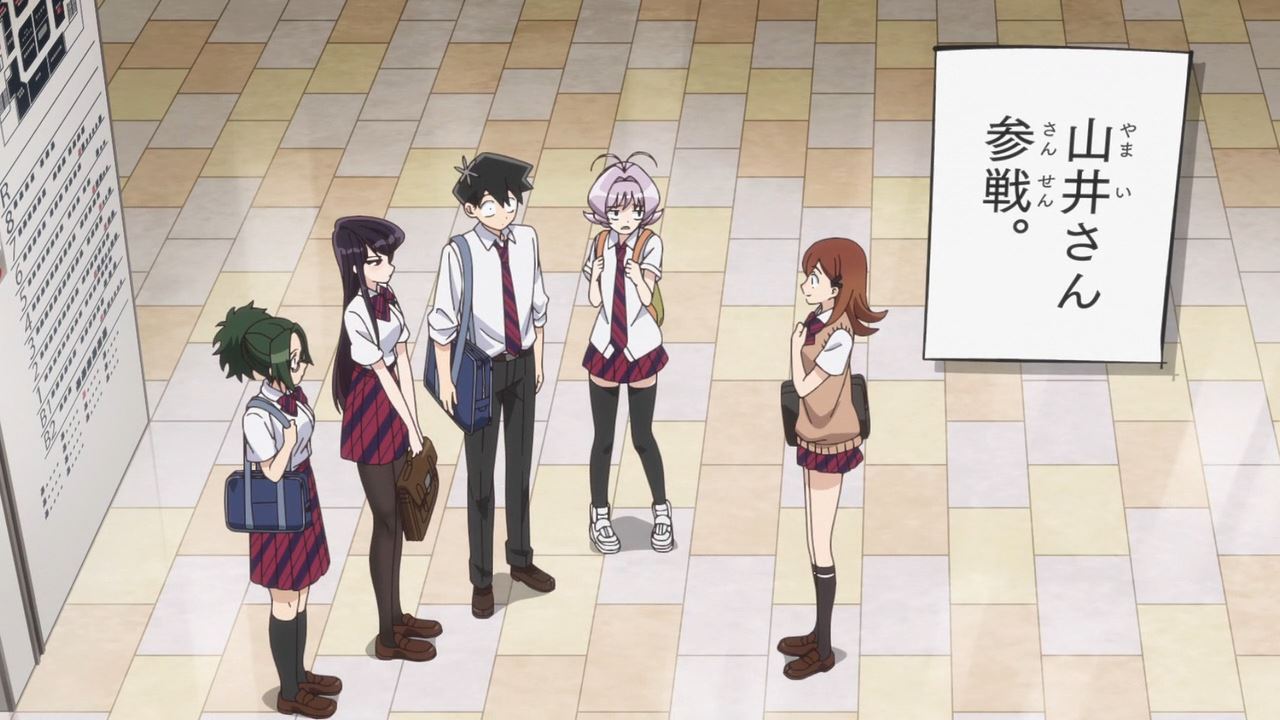 Well actually, Yamai just stalked Komi-san at the mall where I feel that she needs to be arrested for being a bothersome yandere character. 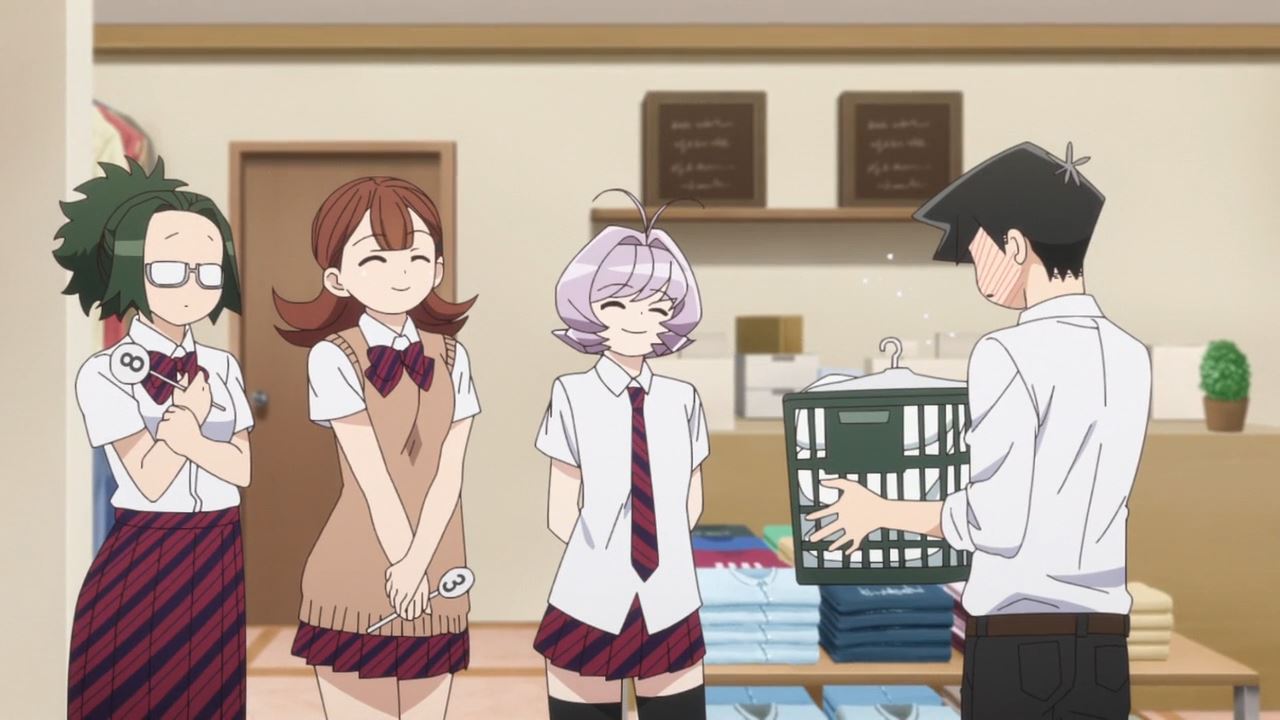 Now then, it’s time for Komi’s friends to buy some clothes for her as the likes to Hitohito Tadano and Najimi Osana wants to see Komi-san in different outfits.

Speaking of Tadano-kun, he already chose some clothes for Komi-san, although Yamai mocked him for his lame style. Gee Ren Yamai, you’ll be eating those words once Komi wears her outfit chosen by Tadano. 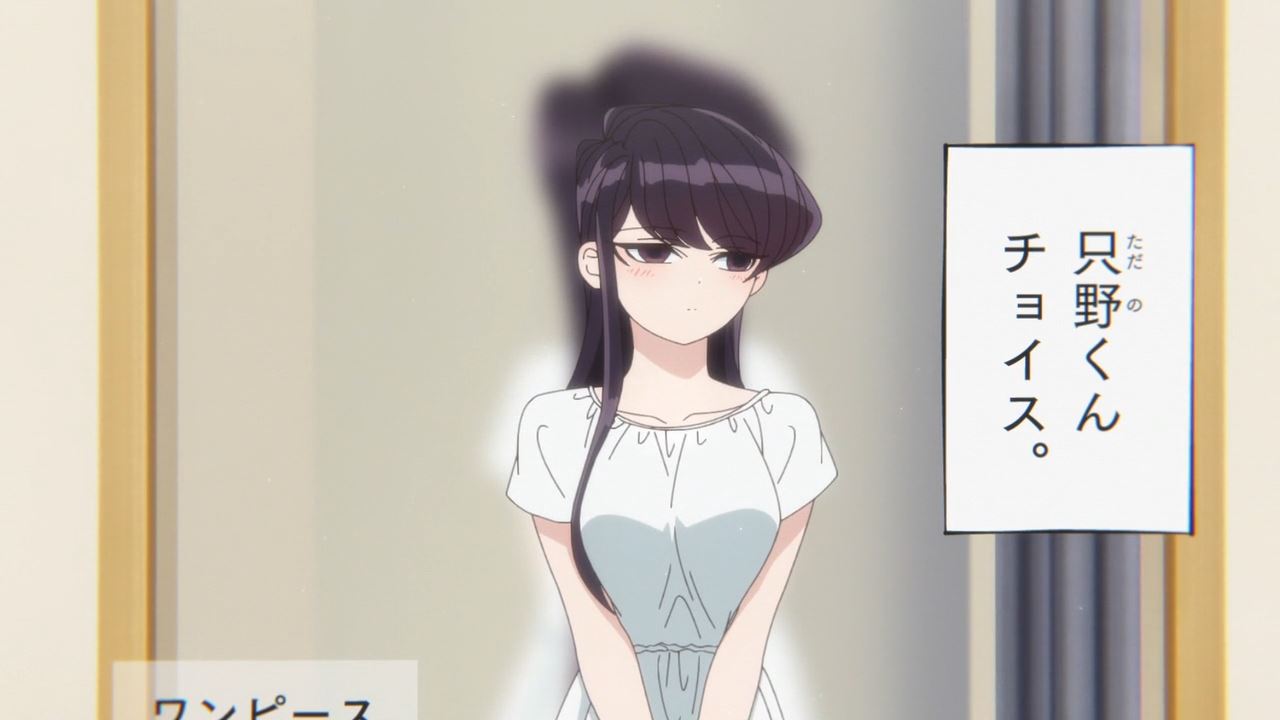 Anyways, here’s Shouko Komi where she looks stunning in her one-piece white dress. Honestly, Hitohito Tadano made the right choice. 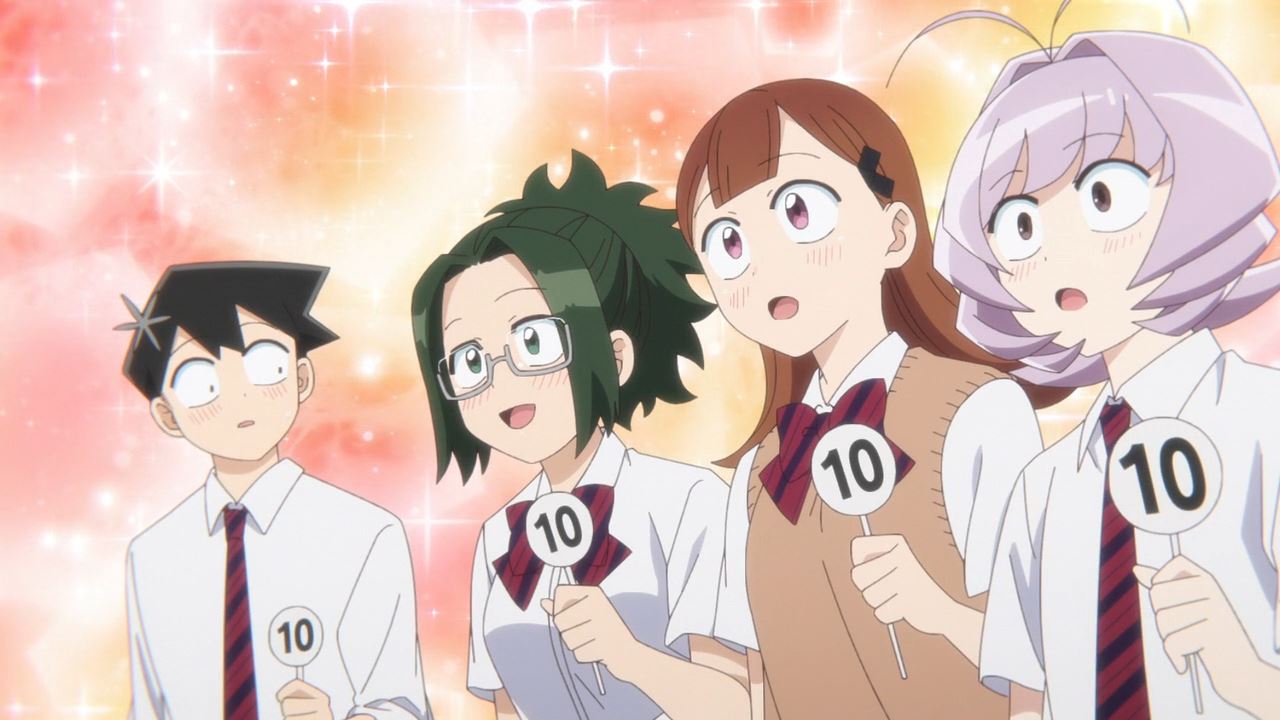 And everybody agrees that Komi-san looks perfect. This includes Ren Yamai where she has nothing to retort other than salivating over Komi’s beauty. 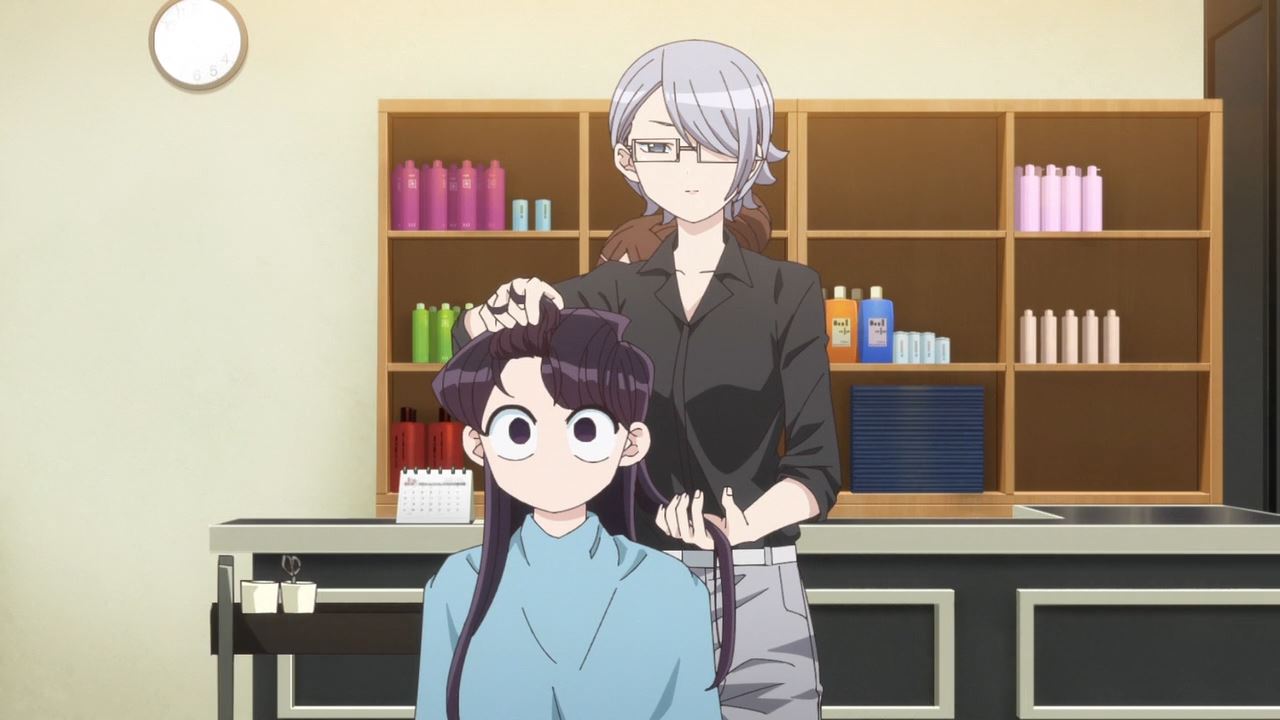 The next day, Komi-san went to a salon where she’ll have her usual haircut from the charismatic hairdresser Masa Karisu.

By the way, Karisu-san knows that Shouko Komi can’t talk, but that doesn’t stop her from cutting Komi’s hair until it’s perfectly done. 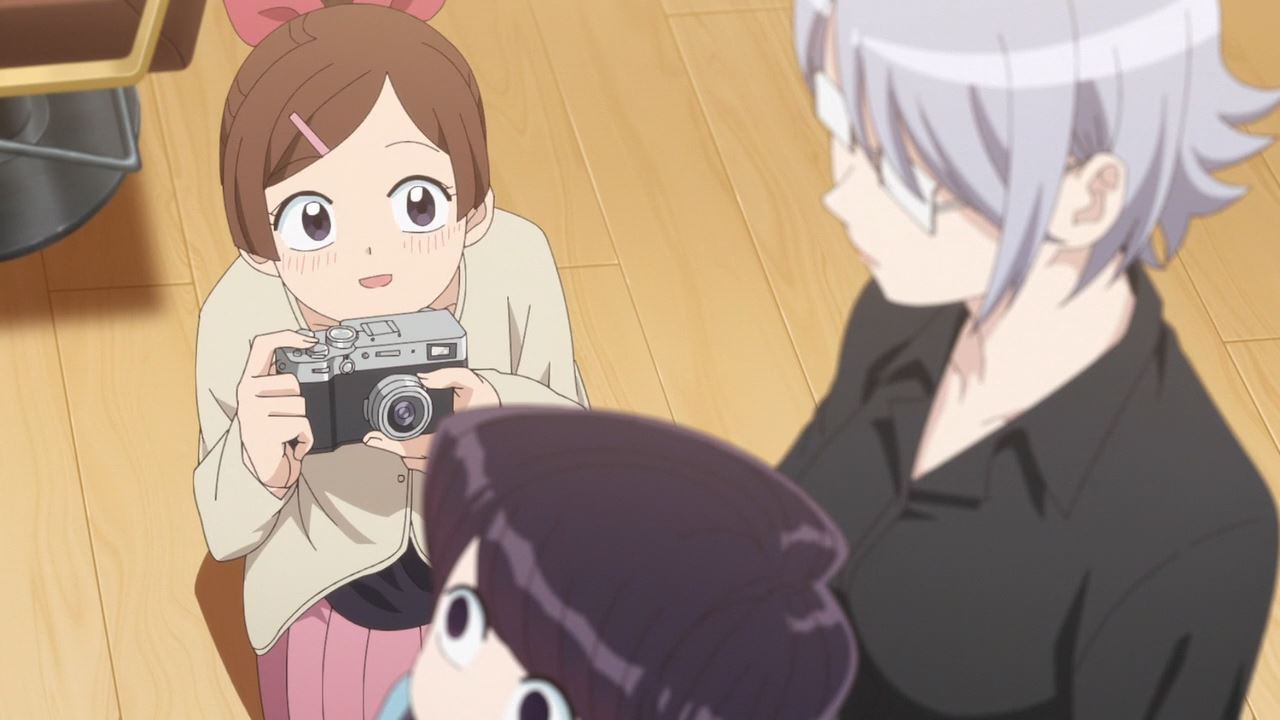 Also, here’s Masa’s assistant named Kamiko Arai where she can’t help but to take pictures of Komi-san, although she’s not aware of Komi’s circumstances until the last minute. 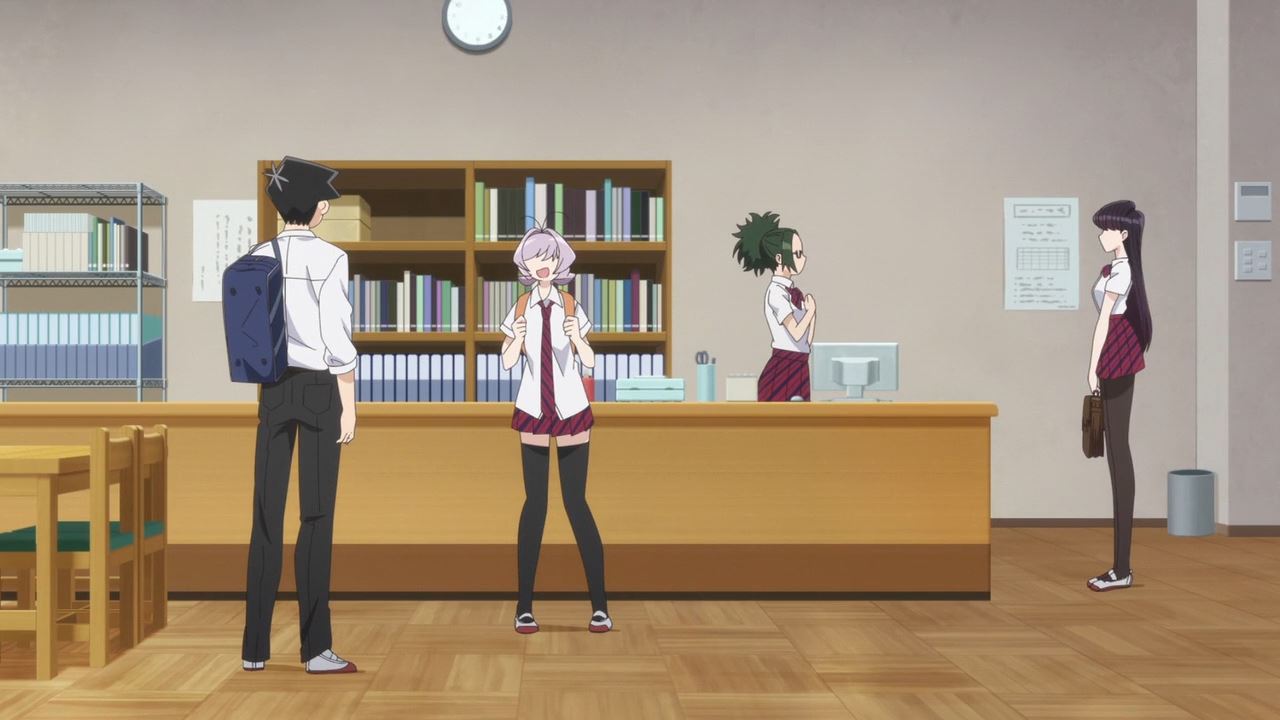 Now then, mid-terms exam is coming in Itan Private High School and they have to study diligently so that they won’t get any bad grades and have remedial classes during summer break.

Anyways, they’re at the library right now where Komi-san and Tadano-kun will be reviewing some notes, although Najimi wants to goof-off inside the library. 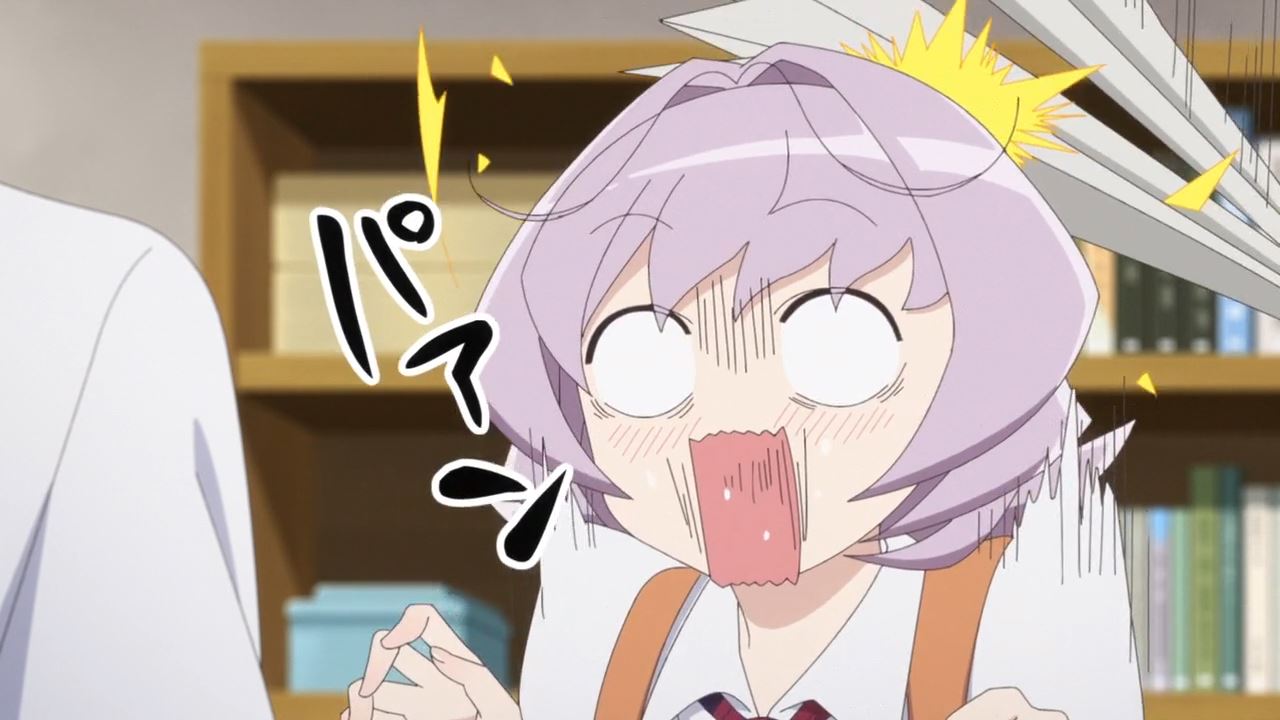 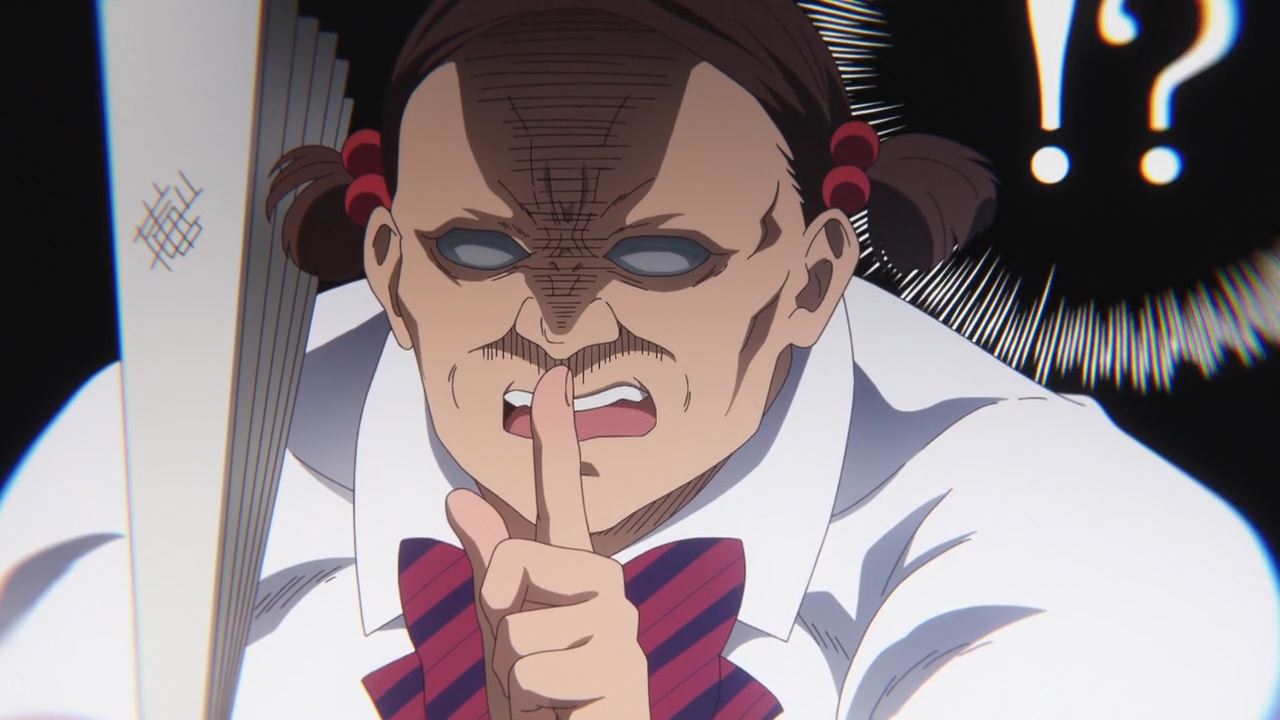 Unfortunately for Najimi Osana, she’ll have to deal with Gorimi-sempai where she won’t tolerate anyone who makes a noise inside the library.

Honestly, Gorimi-sempai looks scary that anyone who tries to make a noise would receive her rather. 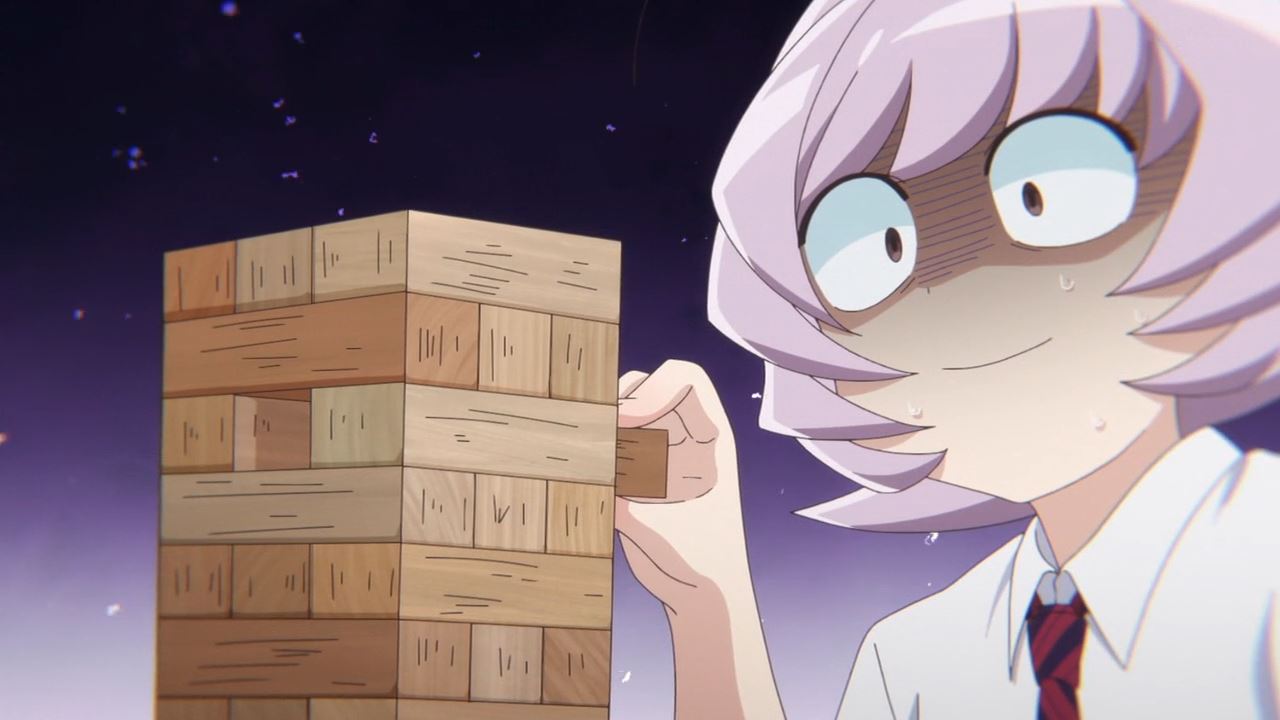 But that doesn’t stop Najimi from playing Jenga inside the library as she doesn’t want to study at all. Man, is Osana scared of being stuck in remedial classes?

Surprisingly, Najimi Osana managed to pass her mid-terms exam despite being a loud-mouthed childhood friend in Itan Private High School. But yeah, looks like Najimi won’t be spending her time in remedial classes. 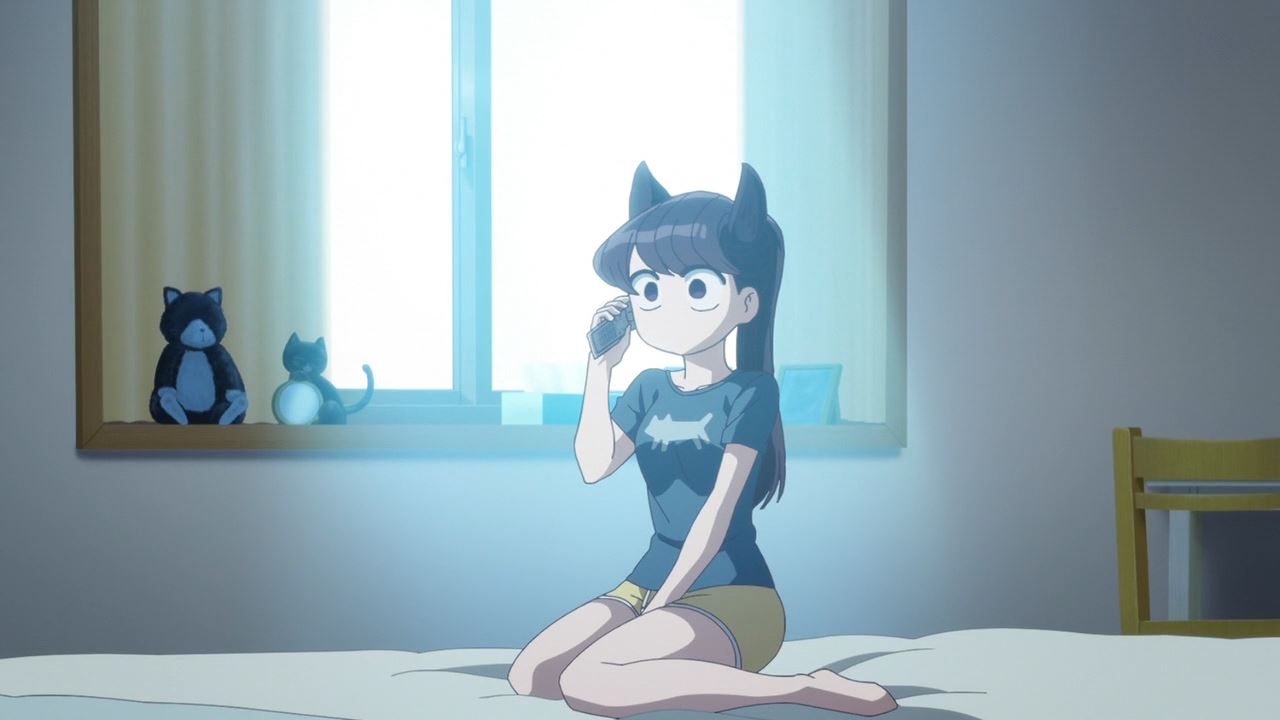 One last thing, here’s Komi-san where she received a call from Najimi rather than Tadano-kun. Really rare for everyone’s childhood friend to call the most socially-awkward beauty in Itan Private High School.

Anyways, Najimi Osana asked Shouko Komi if she wants to go to the beach together with Hitohito Tadano and Himiko Agari. Then again, Osana will only hear silence from Komi-san 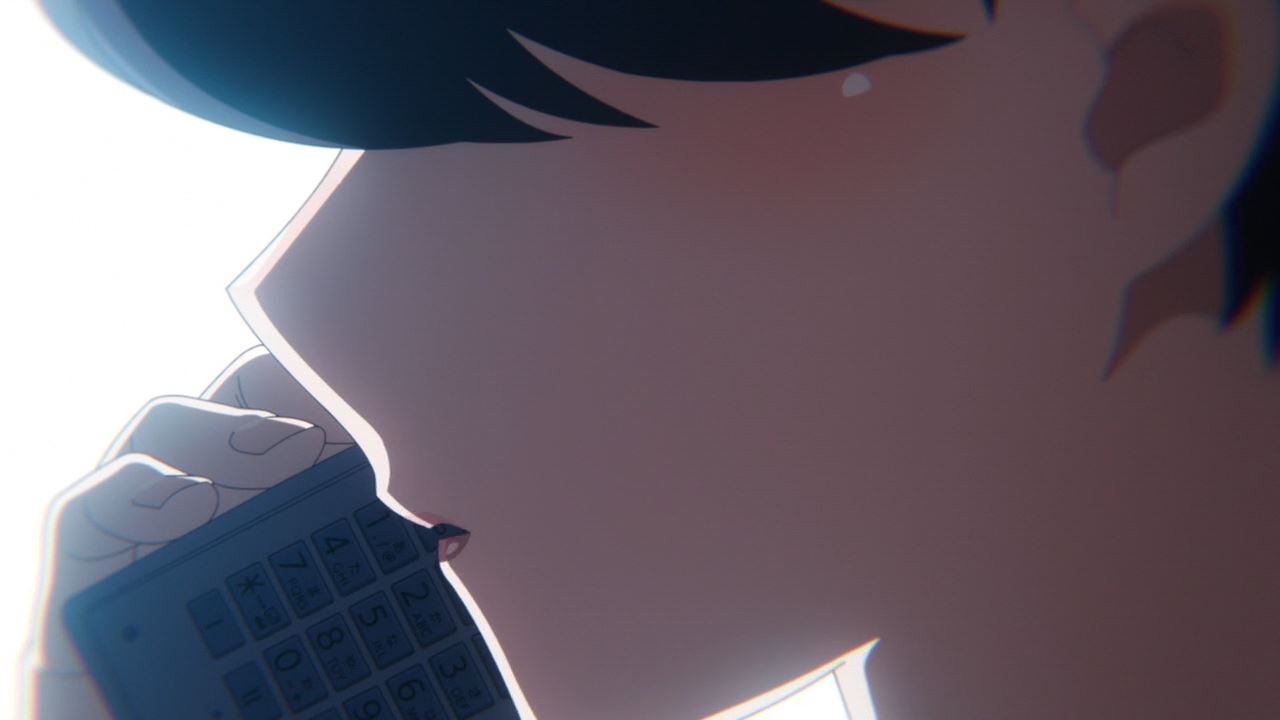 However, Shouko Komi told Najimi Osana (in a soft voice) that she wants to go to the beach. Well everyone, looks like Najimi is the second person who heard Komi’s soft voice.

Anyways, I’ll see you next time where I’m looking forward for the summer vacation episode!