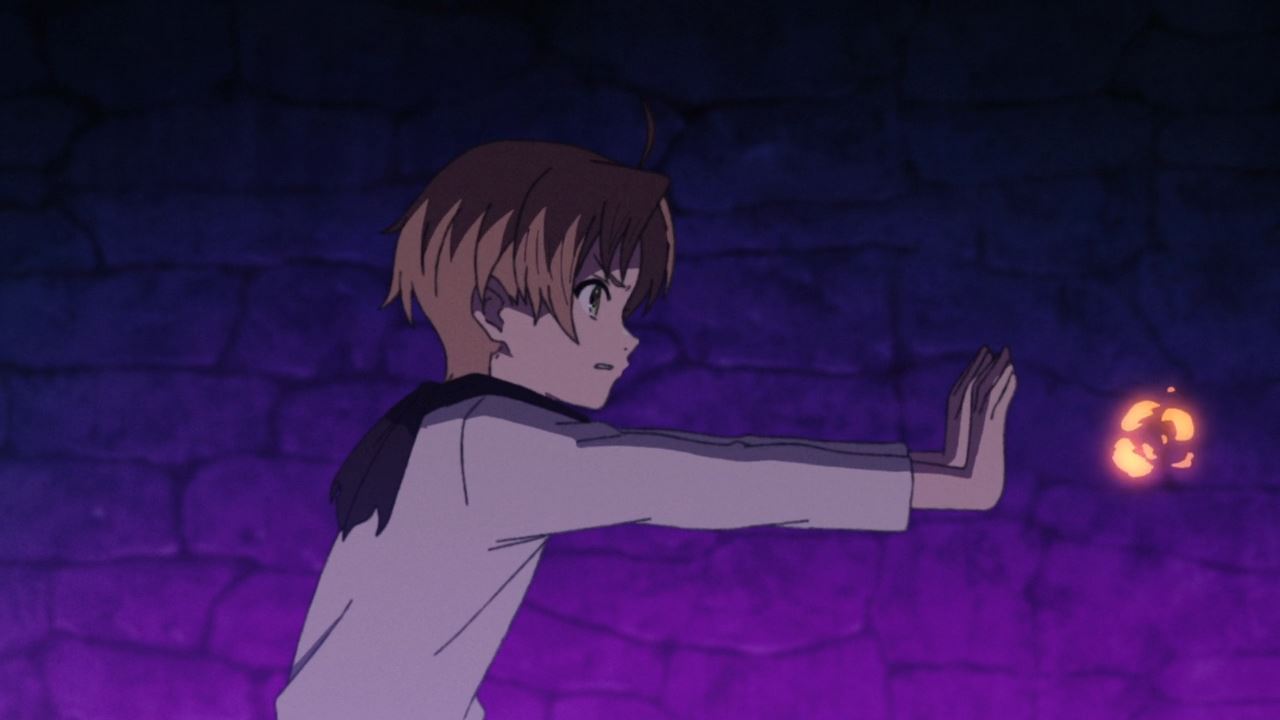 Well everyone, here’s Rudeus Greyrat where he’s trapped inside the barrier. Heck, his magic is useless that the only way to set himself free is for someone infiltrating the castle. 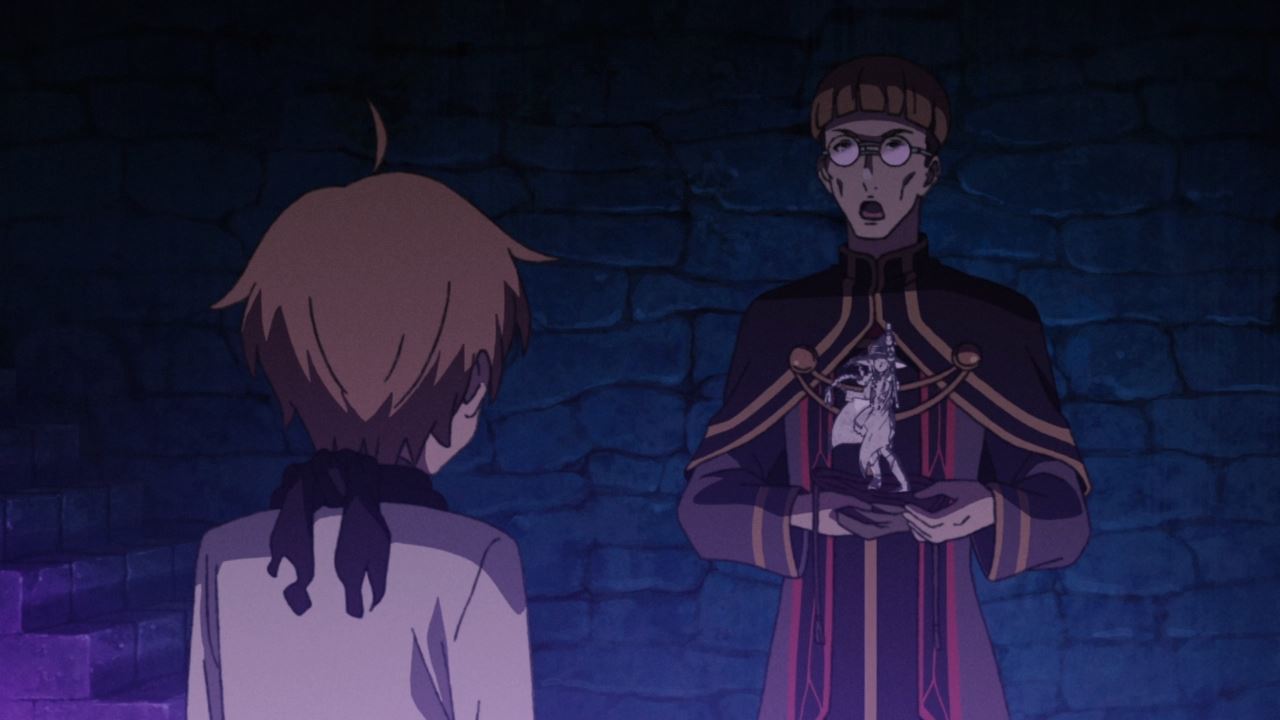 Oh yeah, what he’s holding right now is a statue of Roxy Migurdia where it has a cast-off feature, meaning that the owner can see the figure’s naked body, although Zanoba told Rudy that he sanded-off one speck of imperfection in Roxy’s left hand. 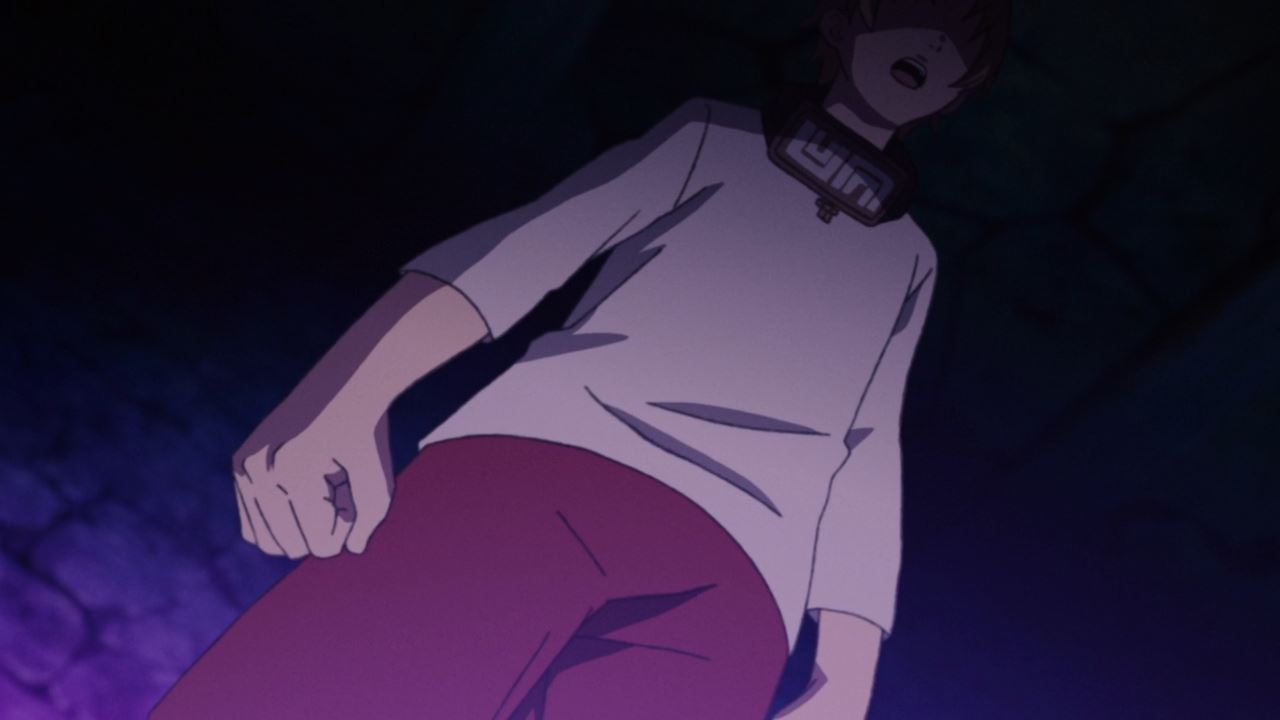 Unfortunately, Zanoba made a mistake as Rudy pointed out that it’s actually Roxy’s mole where it serves as a substitute to her nipple. Never underestimate the creator’s vision as Rudy made that figure.

Anyways, looks like Zanoba Shirone is convinced that Rudy is one hell of a master craftsman as he apologize for removing Roxy’s mole.

Unfortunately for Prince Zanoba, he can’t get his teacher out of the barrier because his troublesome brother Pax is using Rudeus as bait for Roxy, which is impossible to happen given that his tutor went back to the Demon Continent. 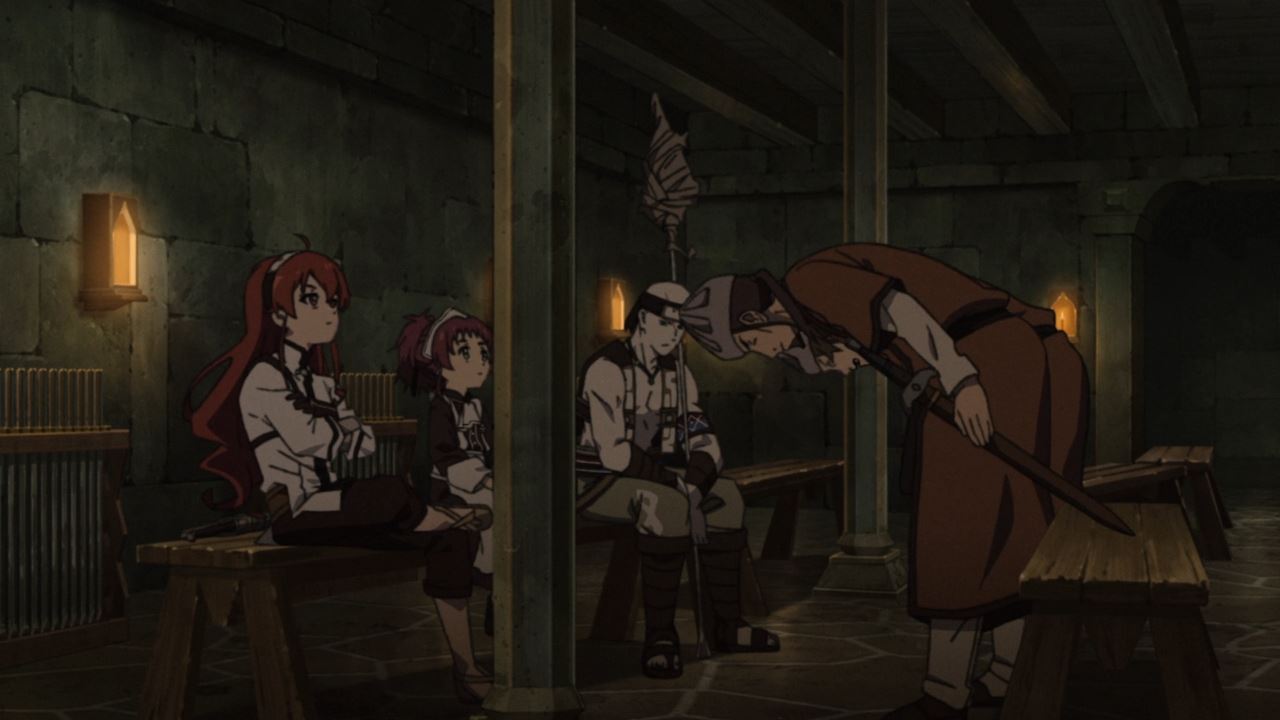 Meanwhile, here’s both Ruijerd Superdia and Eris Boreas Greyrat where they went inside the castle and was supposed to be apprehended by guards, but they begged Ruijerd and Eris to save their families as Prince Pax held them as hostages.

By the way, looks like Aisha went along the ride, but Ruijerd told Eris to take care of the girl as it’ll be bad if Aisha got hurt. 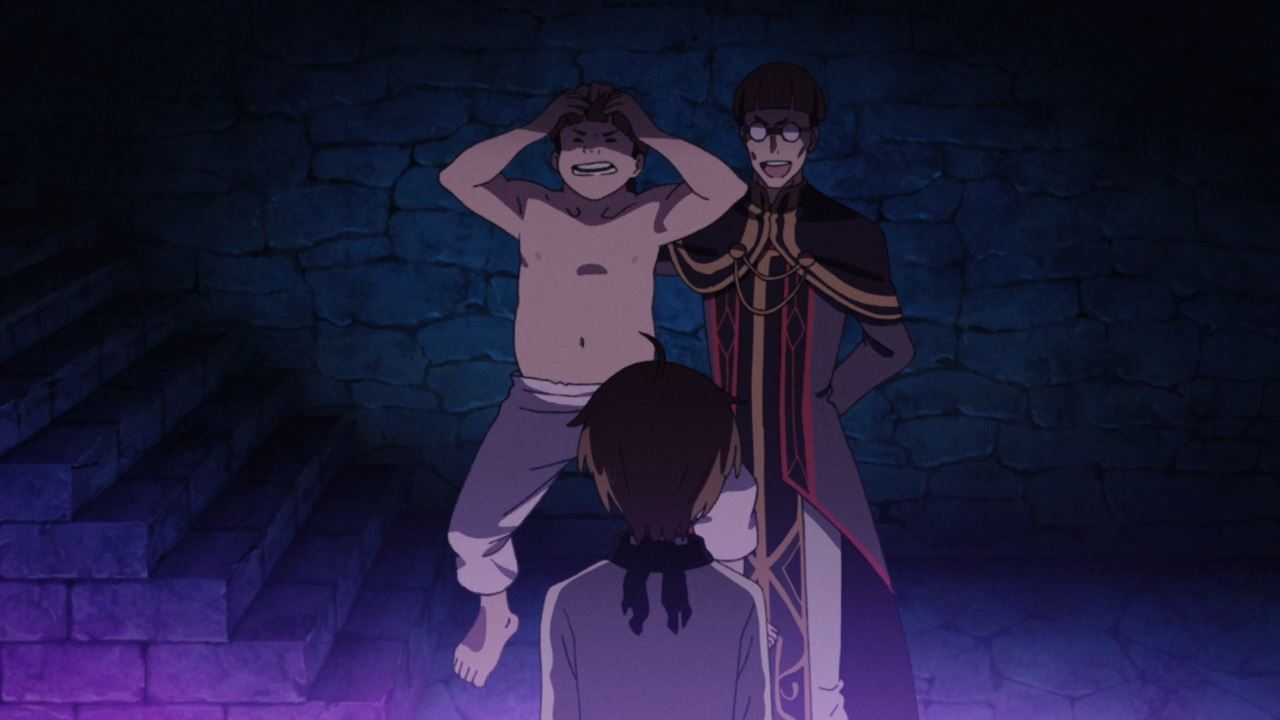 But let’s return to Rudeus Greyrat where it appears that Prince Zanoba Shirone dragged his troublesome brother Pax and told him to set Rudy free, although Pax won’t do that because he insists of using Rudy as bait for Roxy. 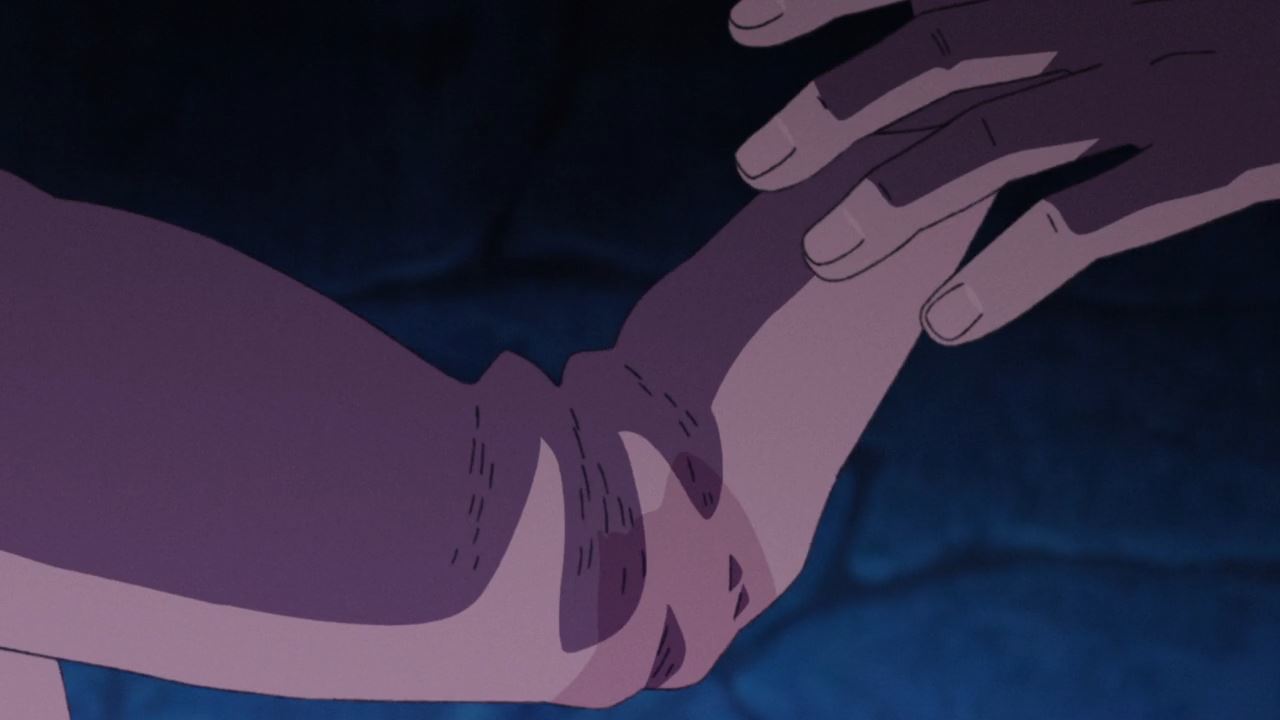 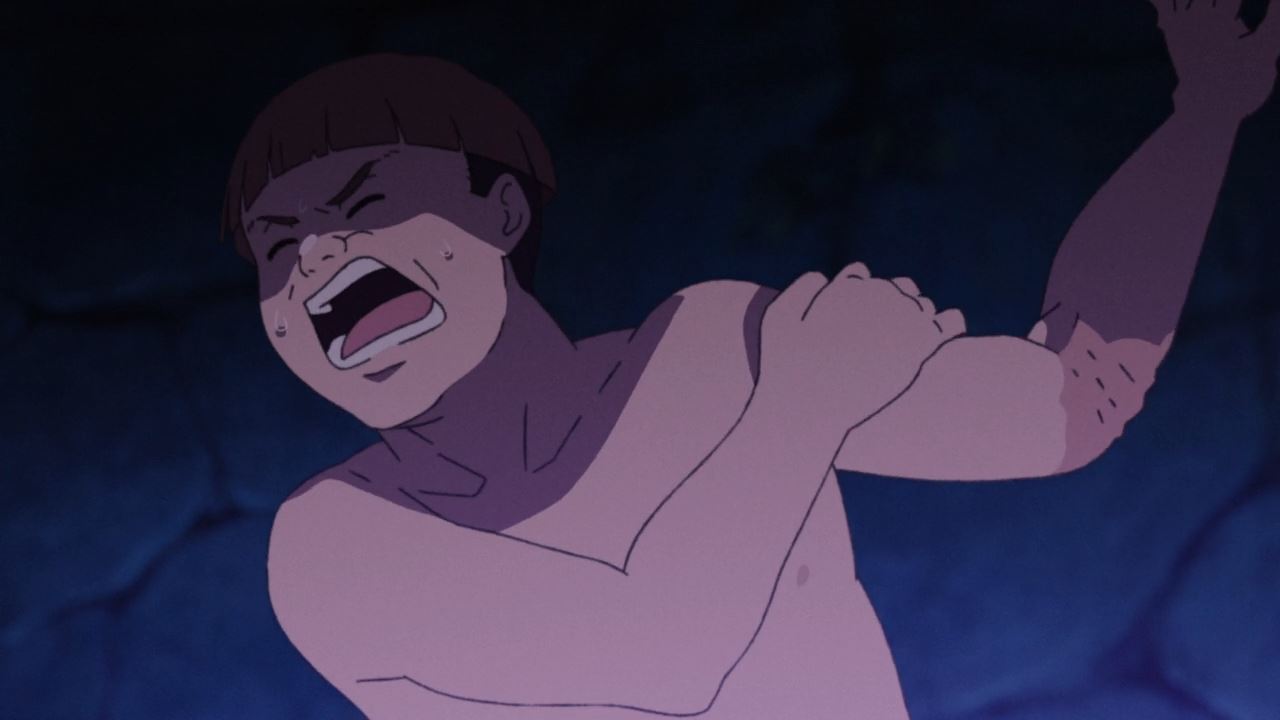 Unfortunately for Pax however, Zanoba lost his patience that he twists Pax’s left arm until he can no longer move it anymore. Of course, Zanoba can break Pax’s neck off if he loses it.

But yeah, looks like Pax has no choice but to remove the barrier as Rudeus Greyrat is rescued! 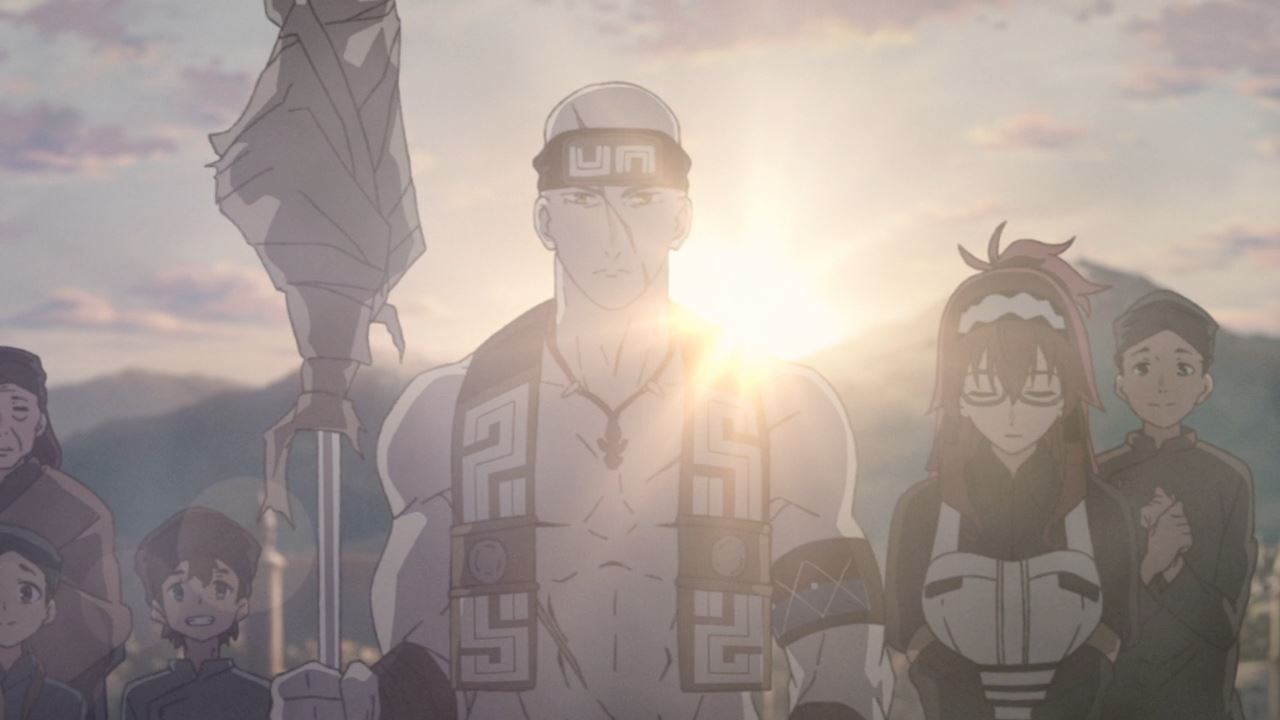 Meanwhile, here’s Ruijerd Superdia where he managed to rescue Lilia, as well as the families of the kingdom guards since they ask Ruijerd to save them. 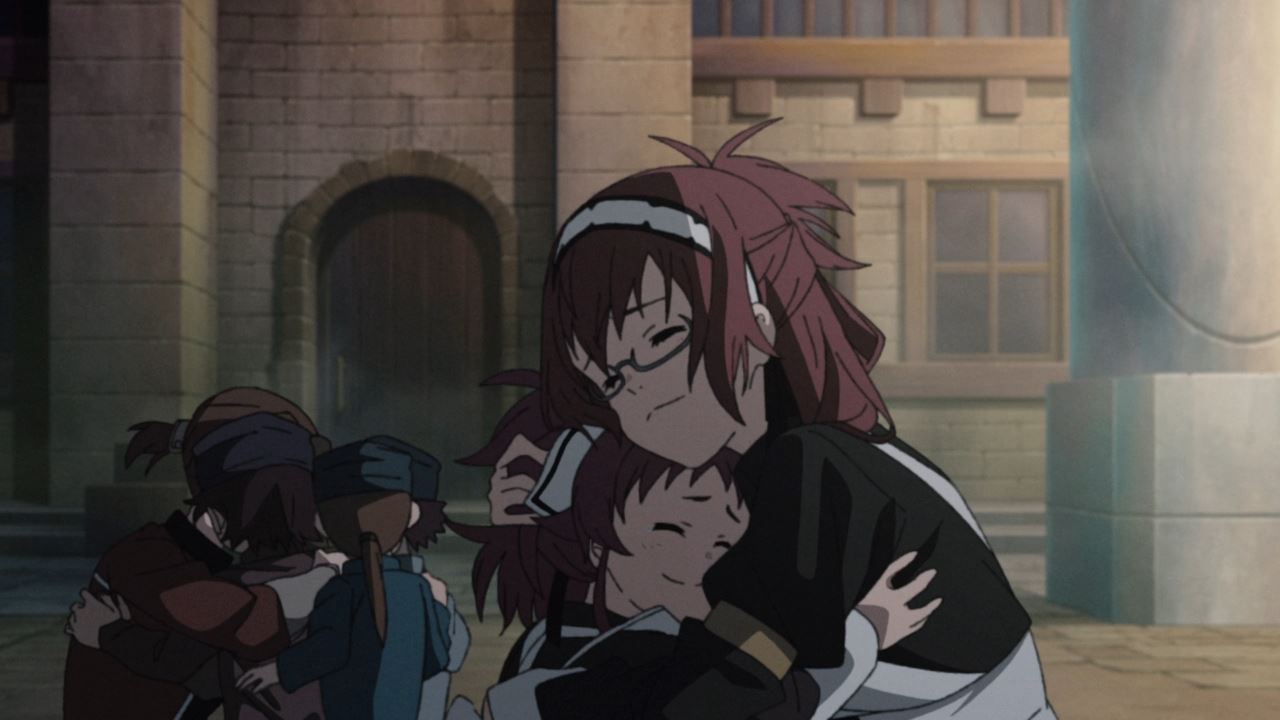 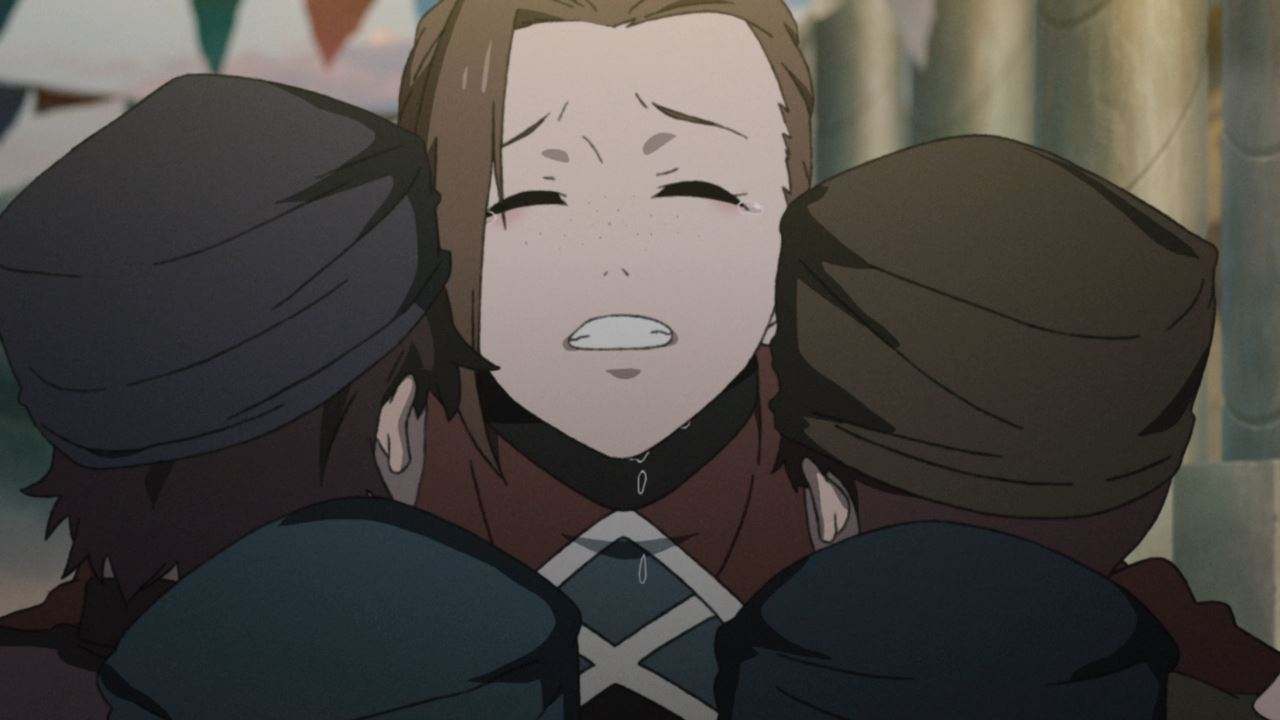 By the way, this is Ginger where she’s the one who came up with a plan to rescue their families by using Rudy as their ace in the hole.

While her plan is almost derailed since Pax lock Rudy up in the previous episode, it’s all thanks to both Eris and Ruijerd where they rescued most of the civilians in the Shirone Kingdom. 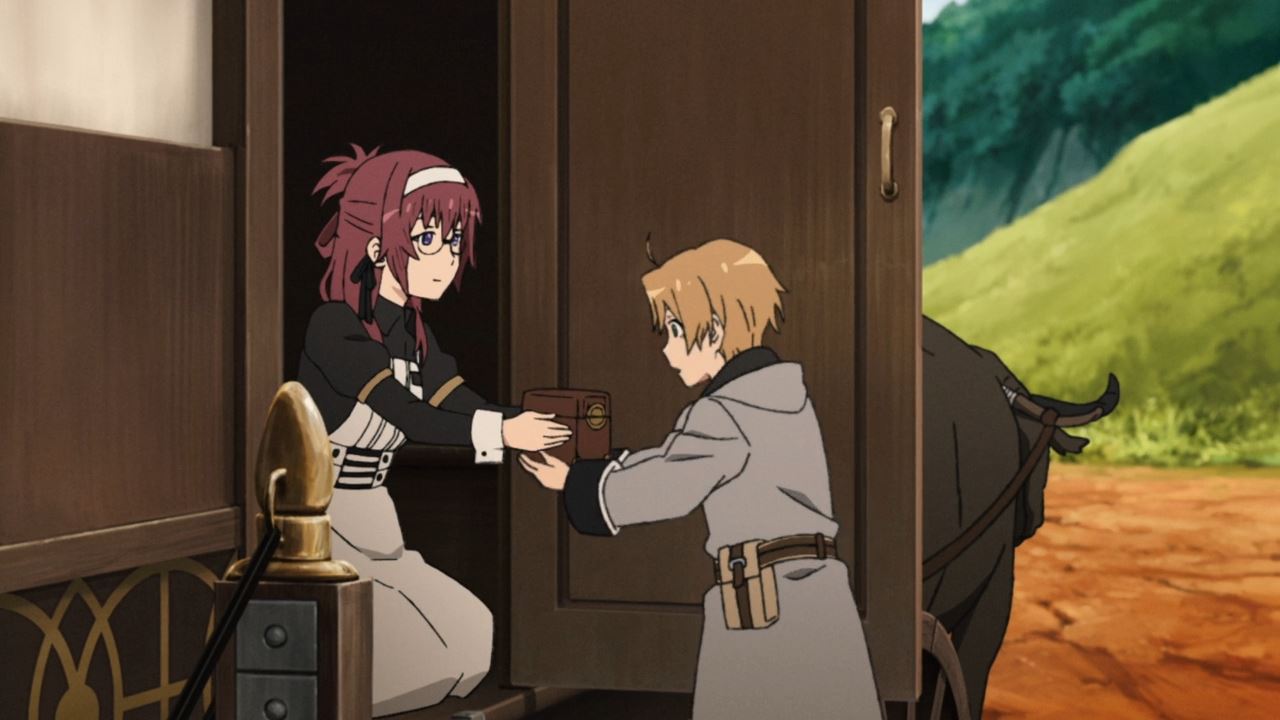 Now then, here’s Lilia where she’s gonna give something to Rudeus now that she’s reunited with Paul’s son. 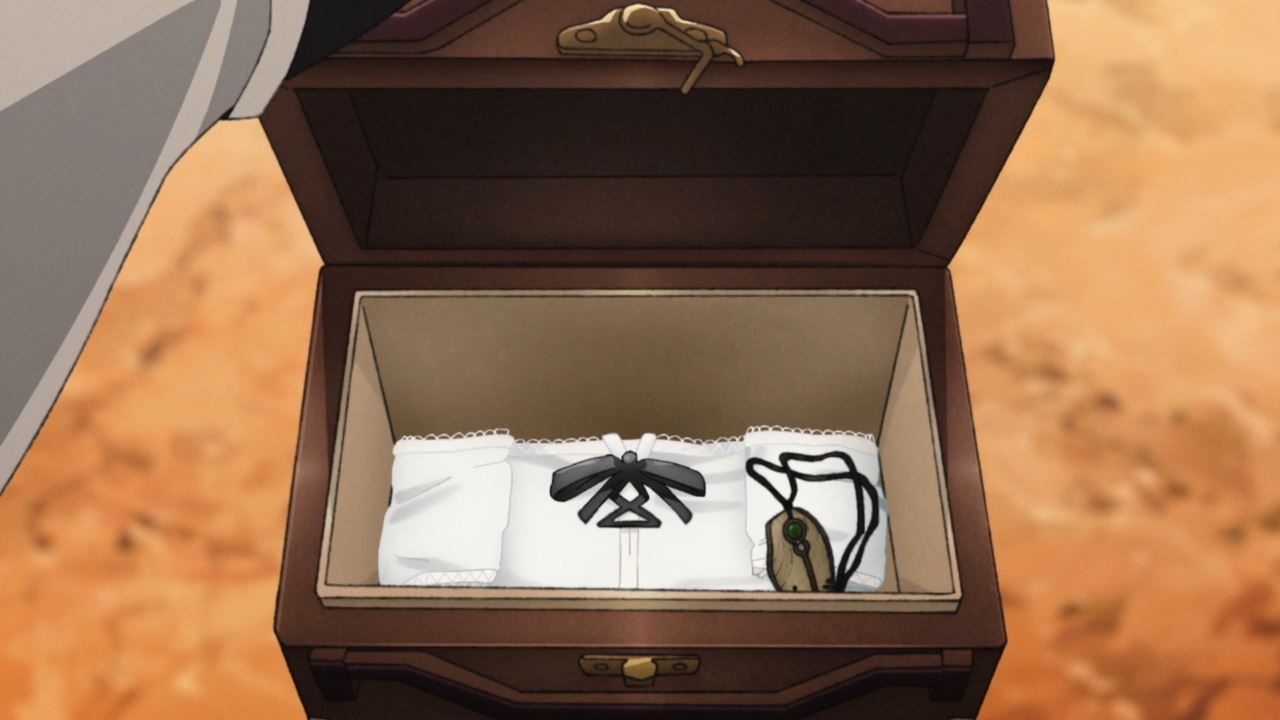 It’s a box that not only contains a pair of panties (possibly Lilia or Roxy), but also a pendant in which Rudy’s childhood friend Sylphiette wants to give him a birthday present.

Come to think of it, I wonder if Sylphy is safe as she’s also transported somewhere? 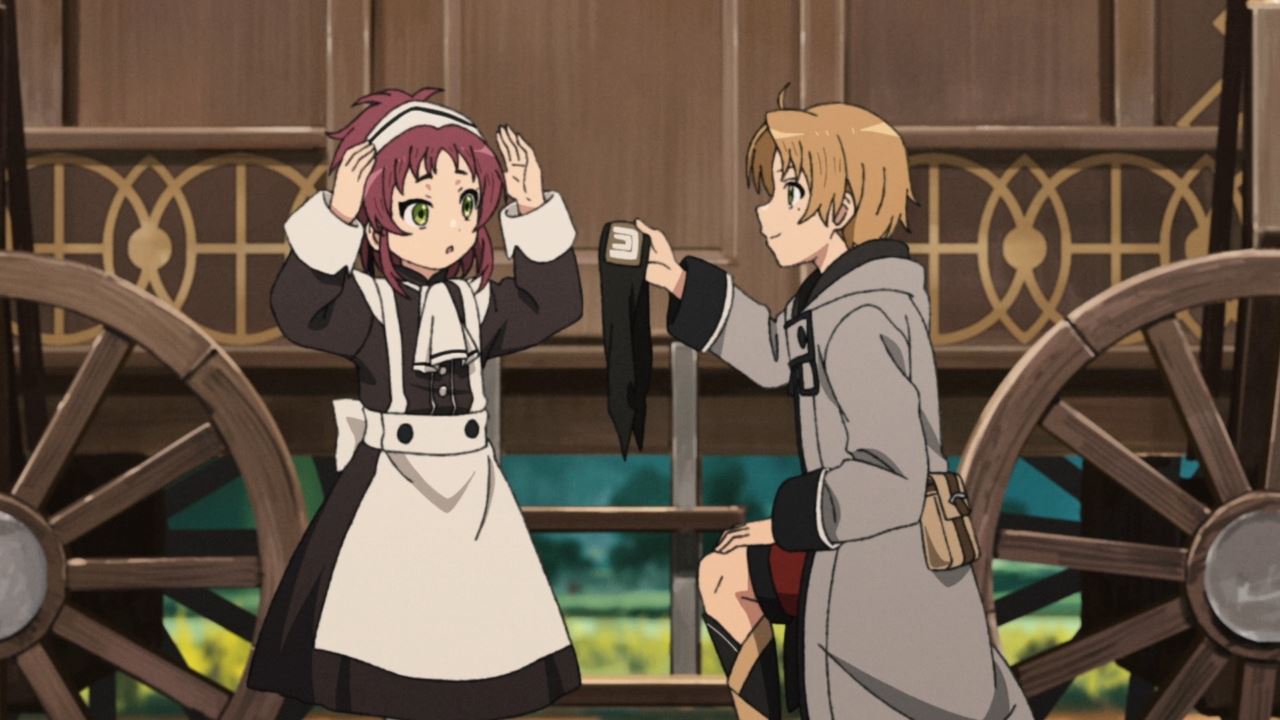 Now then, it’s time for Rudy to leave Shirone Kingdom as he, Eris, and Ruijerd will travel towards Fittoa. However, Aisha wants to join Rudy on his quest, something that he doesn’t want to because Aisha hates her brother’s pervertedness.

Instead, Rudeus gave Aisha a head protector as a memento that would put her at ease, although I wish Aisha would forgive Rudy for having the wrong impression of him. 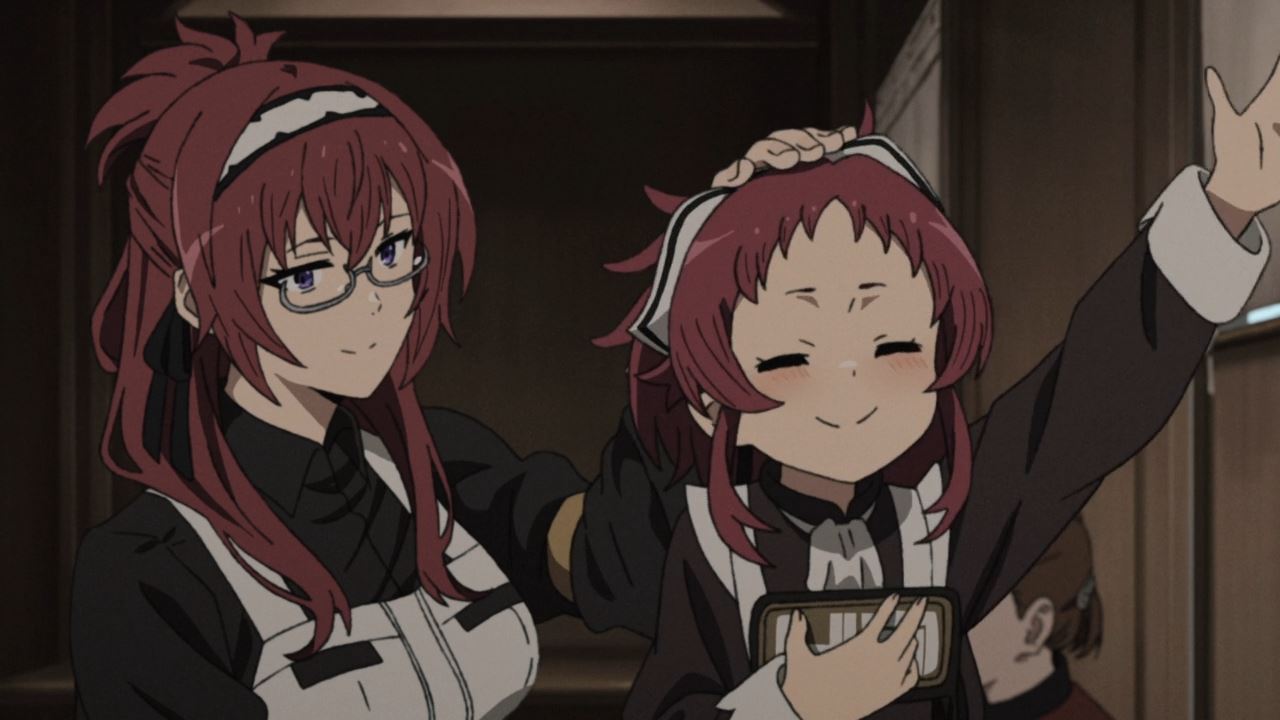 In the end though, it looks like Aisha no longer despises Rudeus as she saw how amazing her brother is rather than being branded as a sexual deviant. Wait, did she knew it all along that Rudy (or Kennel Master) as her brother? 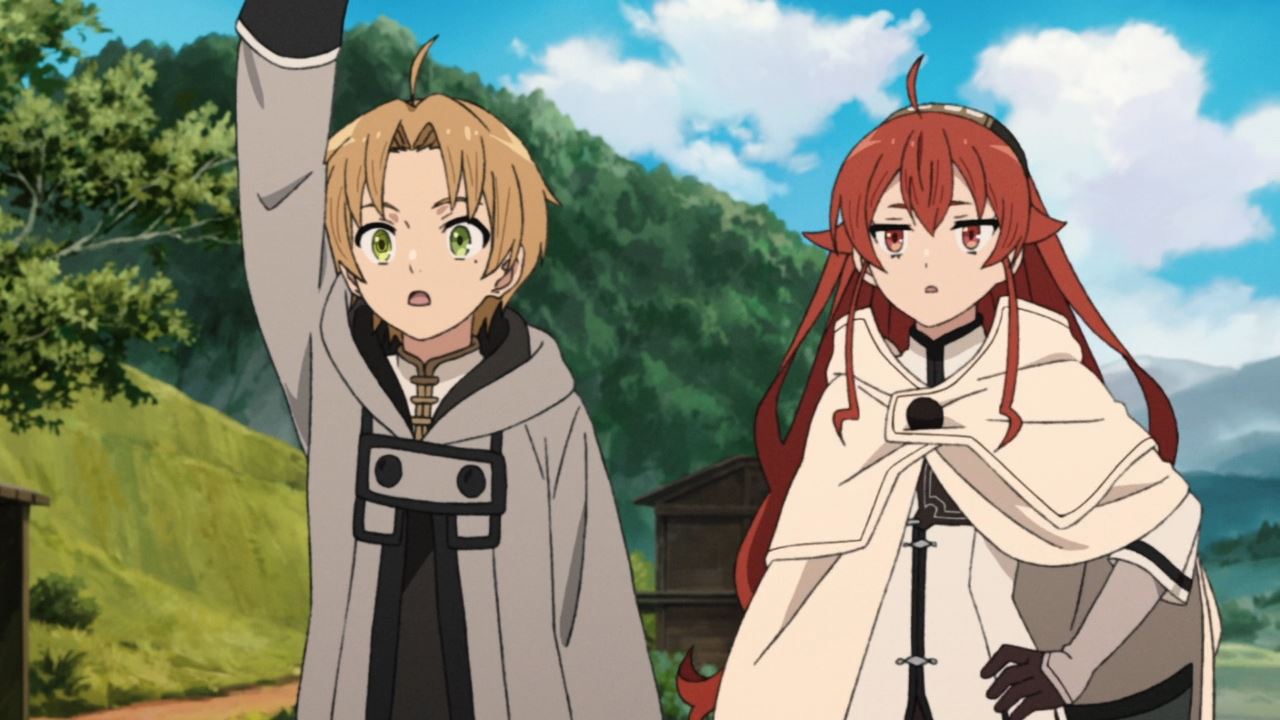 Speaking of Rudeus Greyrat, he’s stunned that Aisha knows everything about him. Anyways, all’s well that ends well in Shirone Kingdom. 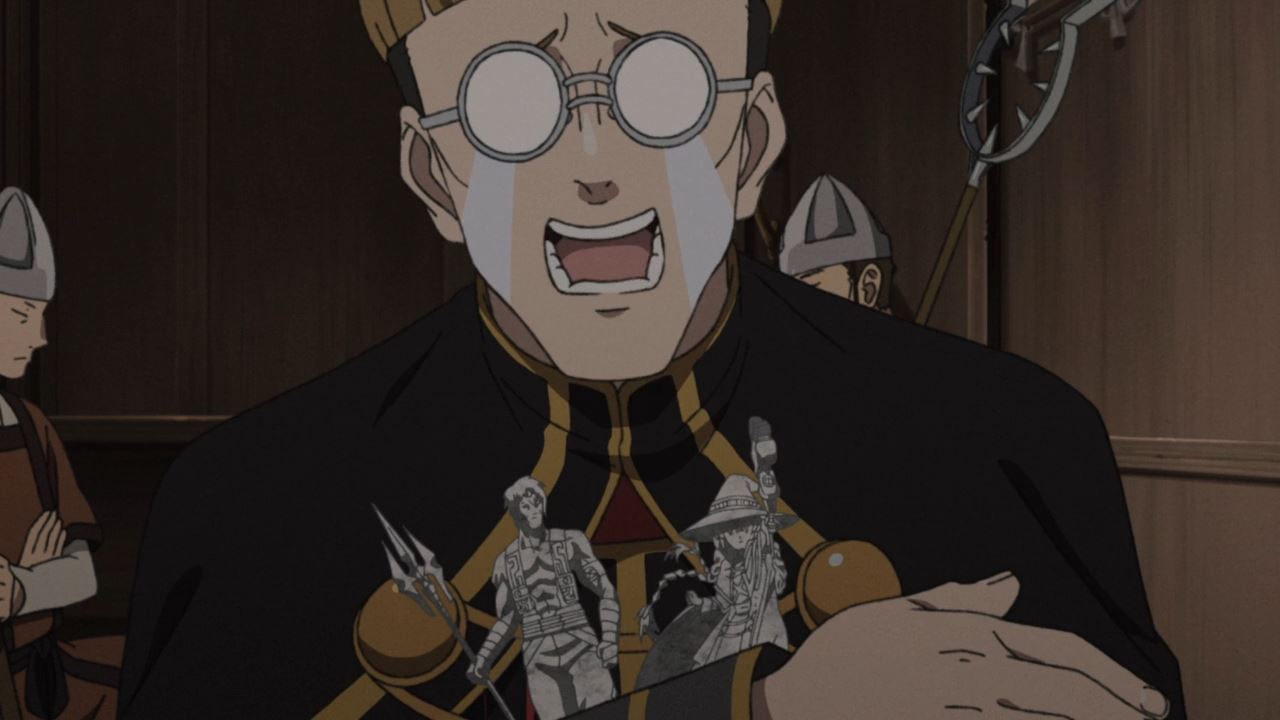 One last thing, here’s Zanoba Shirone where he decides to leave the kingdom as an exile along with his troublesome brother Pax. I guess he’s responsible for not stopping his brother’s insatiable lust that Pax lock everyone up just to get his hands on Roxy.

But that’s about it for this episode as Rudeus Greyrat managed to rescue both Lilia and Aisha. I’ll see you next time where I’m hoping that he can rescue his mother Zenith and possibly Sylphy once they arrive in Fittoa.