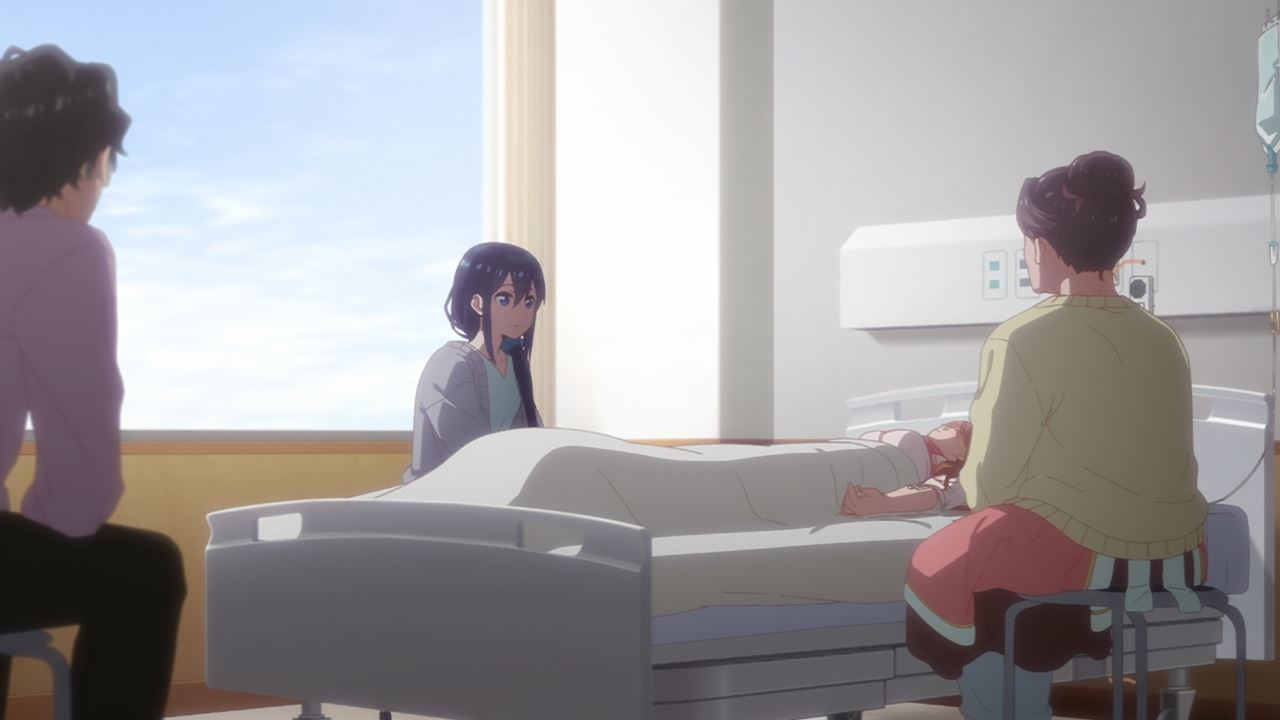 Well everyone, this is the final episode where Rena Hananoi and the CEO are waiting for Suzune Miyama’s revival.

Of course, it’s not gonna be easy given that Suzune has a long history of health problems, meaning that her chances of waking up from her coma are 50/50. 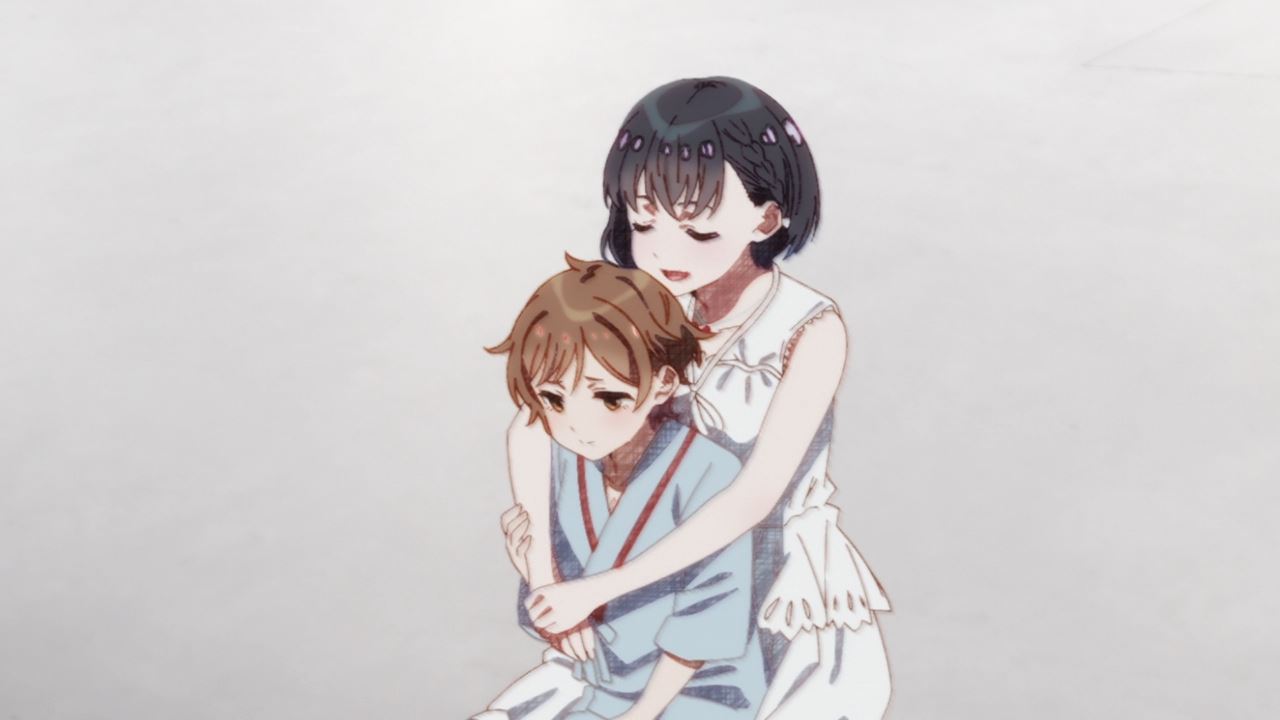 But let’s move onto Suzune Miyama where she had a heart-to-heart talk with Akari Amasawa, the winner of Selection Project Season 1 where Suzune was inspired by her singing voice and also responsible for donating her heart to Miyama after her tragic accident.

In any case, Suzune Miyama thanked Akari Amasawa for realizing her dream as an idol, aside from letting her live thanks to Akari’s heart. While it’s nice to see Suzune thanking her idol, I’m worried that she might not wake up again. 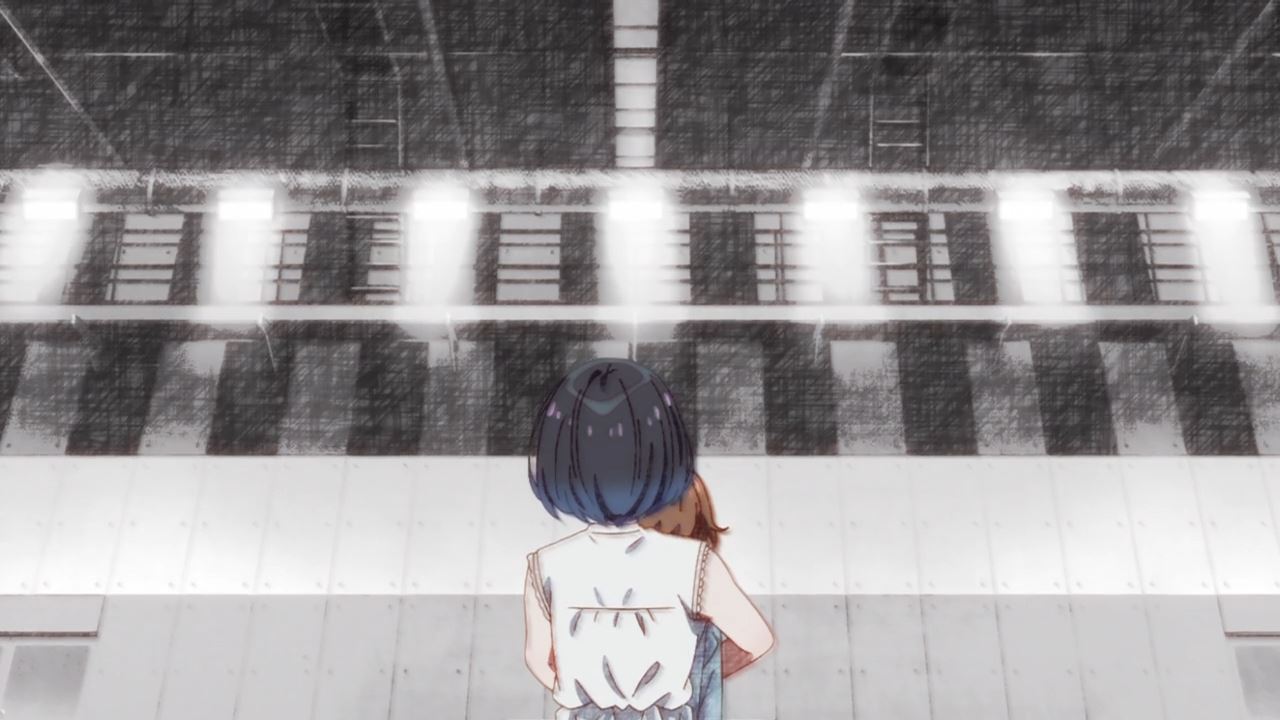 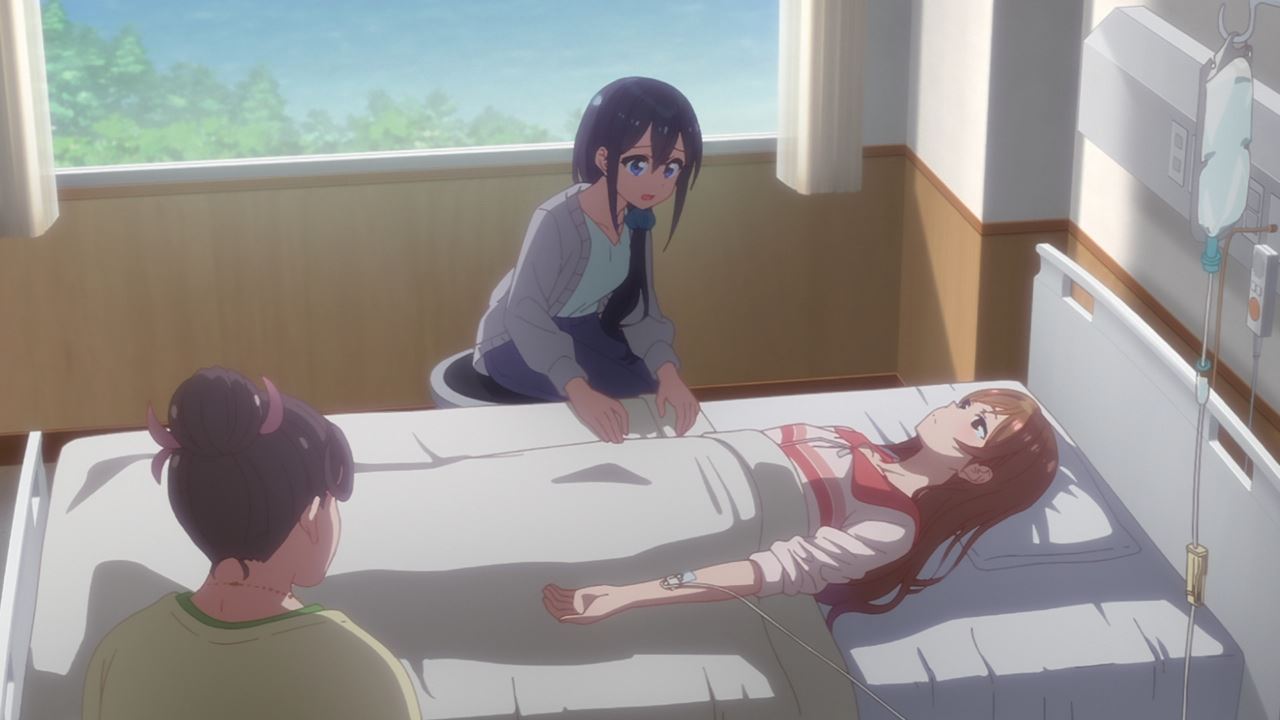 And thanks to Akari’s guidance, Suzune finally woke up from her coma in which Rena and everyone else are happy to see her alive. Now, they need to get back to the stage, but is it too late? 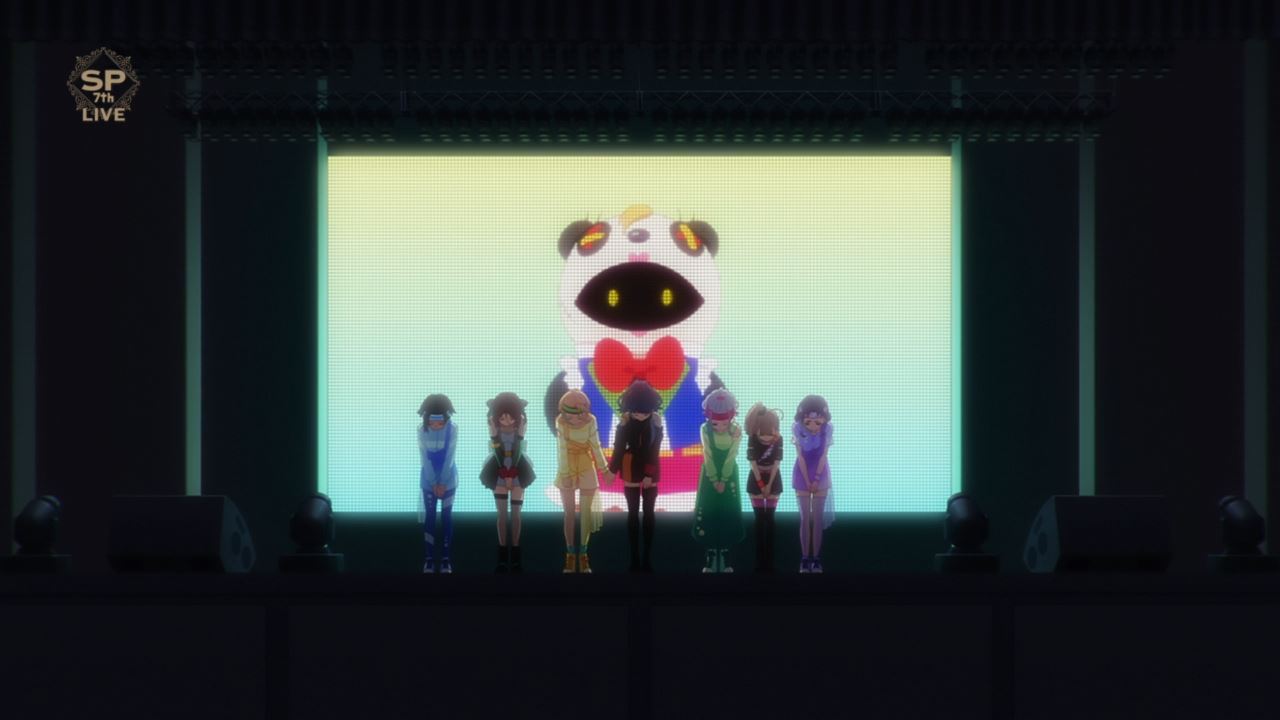 Meanwhile, it looks like Sumipanda announced that the contestants got over 1,000,000 Cheerers, meaning that they’re halfway on reaching 2,000,000.

However, Hiromi Hamaguri and the rest will have to address the current situation. C’mon, they’re really worried about Suzune Miyama. 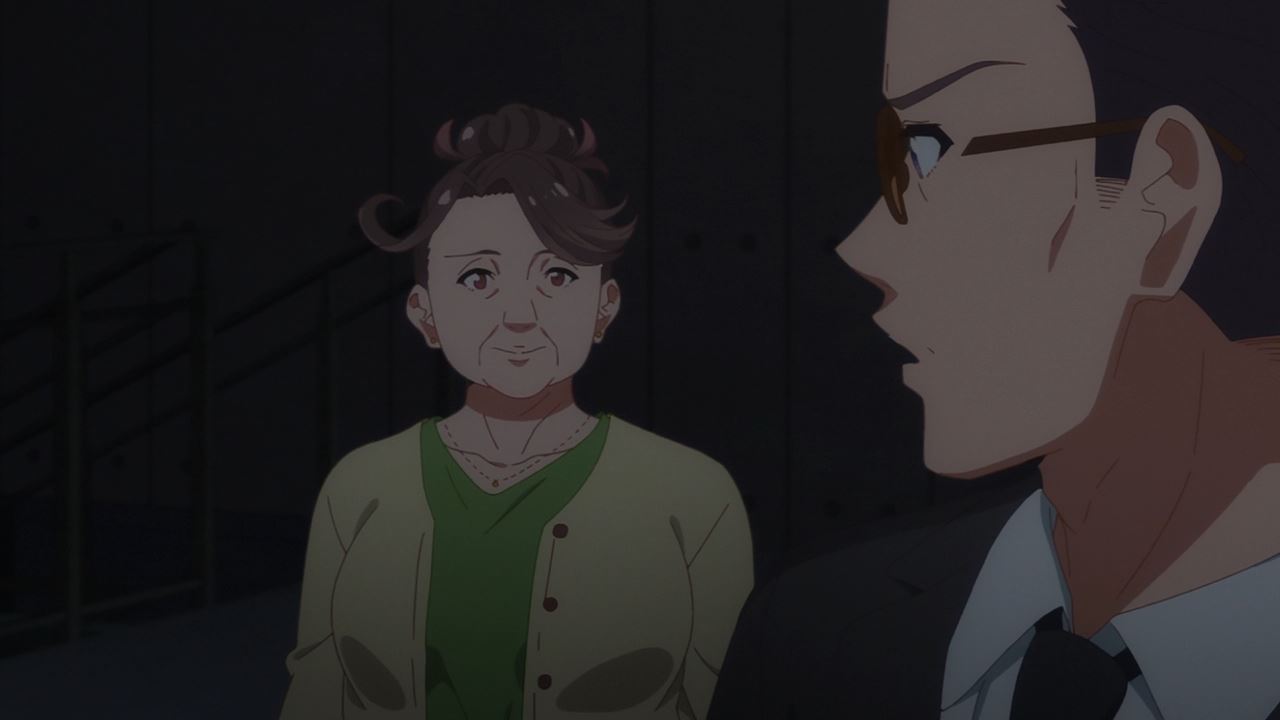 Fortunately, there’s nothing to worry about as Sunny told Jun Oshiruko that Suzune Miyama and Rena Hananoi have finally arrived to perform their duet song.

As expected from the CEO/dorm manager, she made the impossible possible! 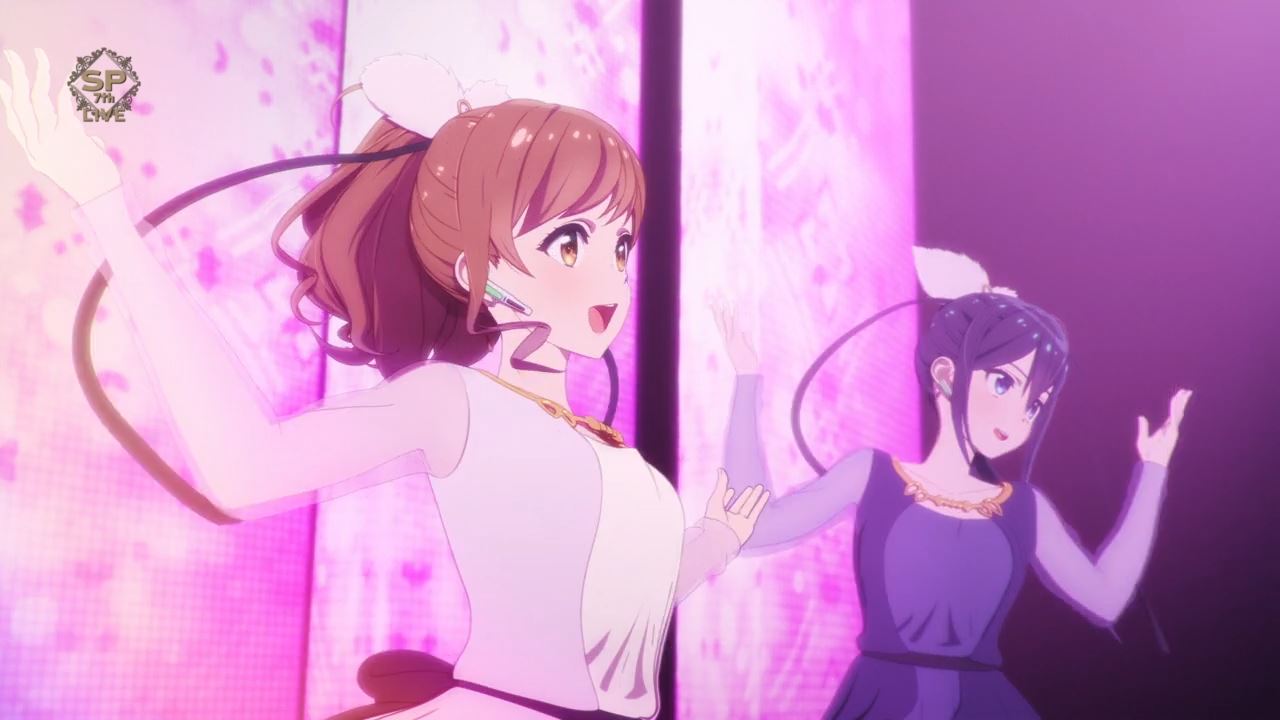 Anyways, here’s SuzuRena where they perform “B.B.” or “Butterfly Bright”. Unlike before where Rena felt antagonistic towards Suzune, this one shows that Rena is happy to perform with Suzu-chan. 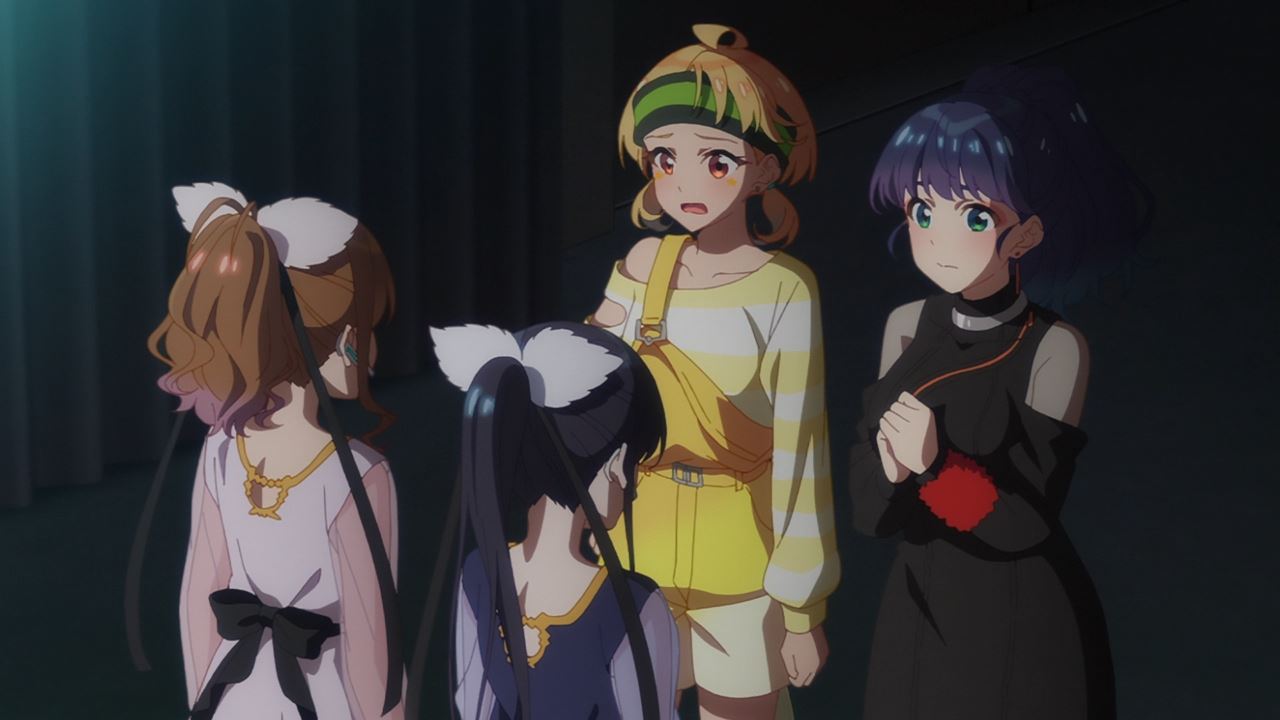 Now then, looks like the Season 7 contestants are happy to see both Suzune and Rena arrived at the last minute. C’mon, 9 girls are needed to reach their dream as idols.

Of course, they still haven’t reached the quota of 2,000,000 Cheerers so if they fail to reach that, their road to stardom will end there. 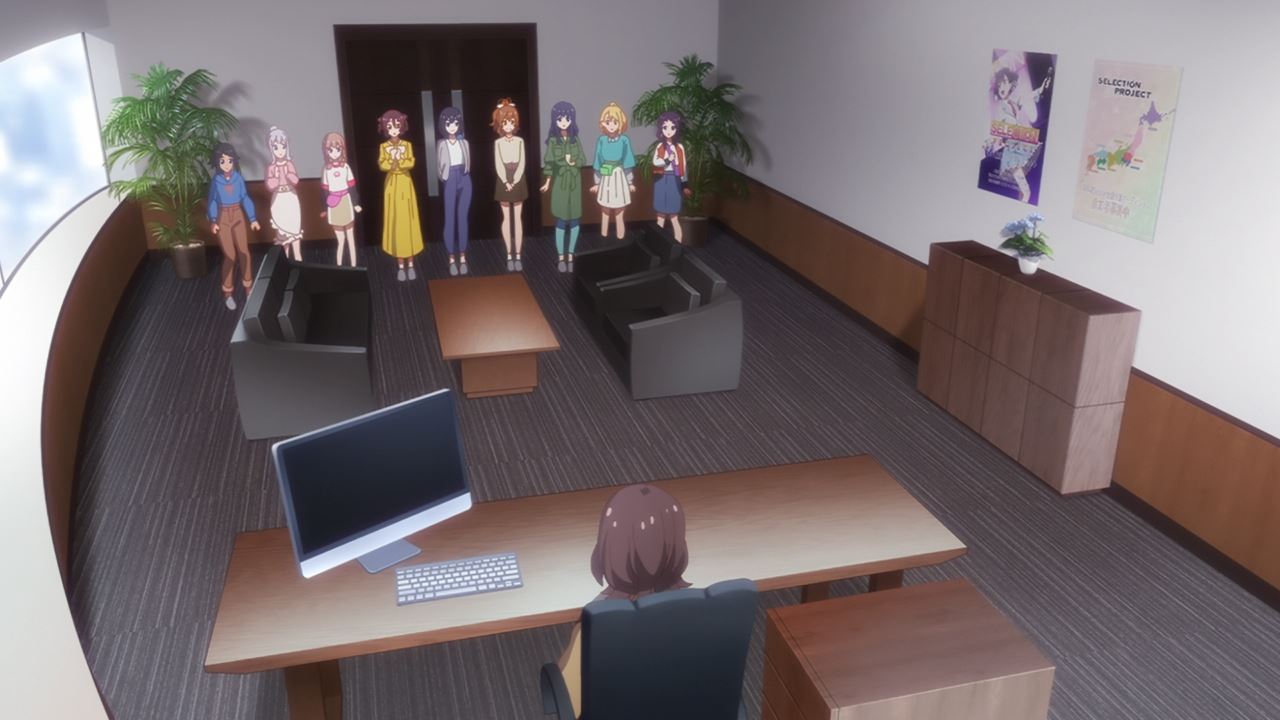 But before they perform their final song, it’s time for the girls to meet the CEO of Production Select.

Basically, it’s the dorm manager Sunny where she managed the Selection Project talent search program, although Suzune Miyama and Rena Hananoi already met her back at the hospital. 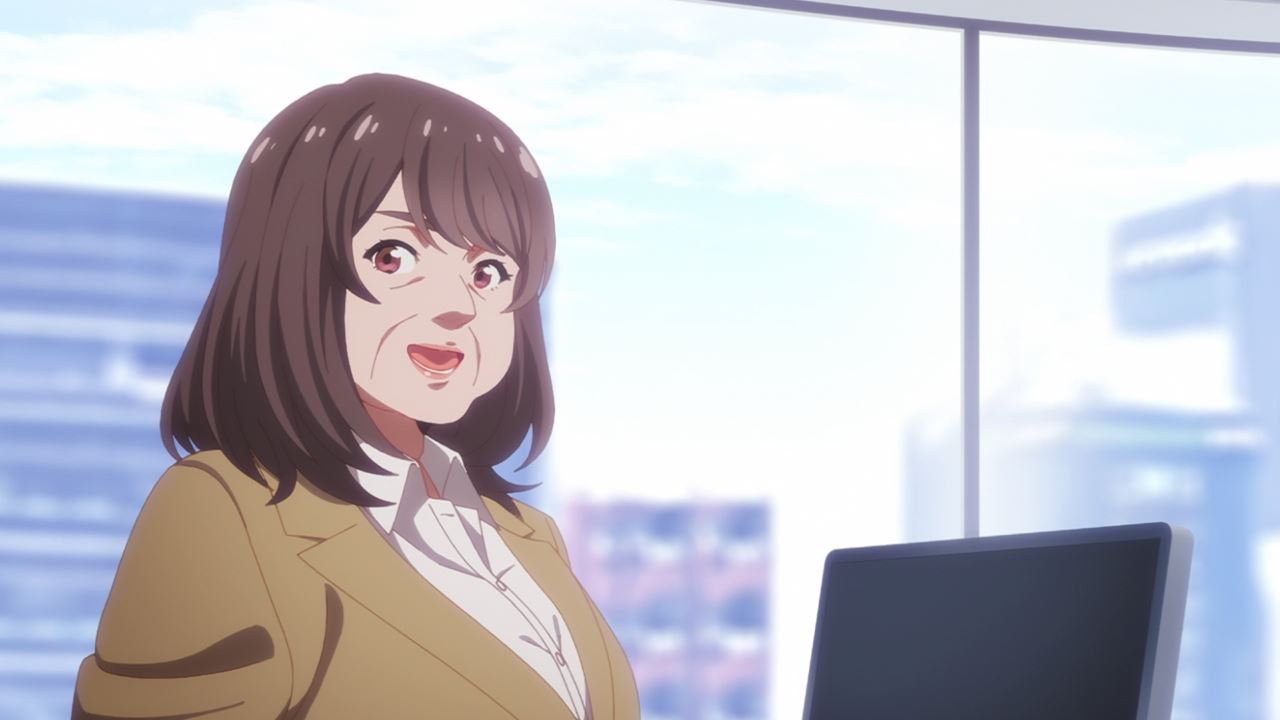 Anyways, Sunny told the girls that their road as idols has just begun where they need to work harder in order to meet everyone’s expectations.

Of course, the Season 7 contestants need to reach the goal of 2,000,000 Cheerers in order to win the competition. Well then, time for their final performance, shall we? 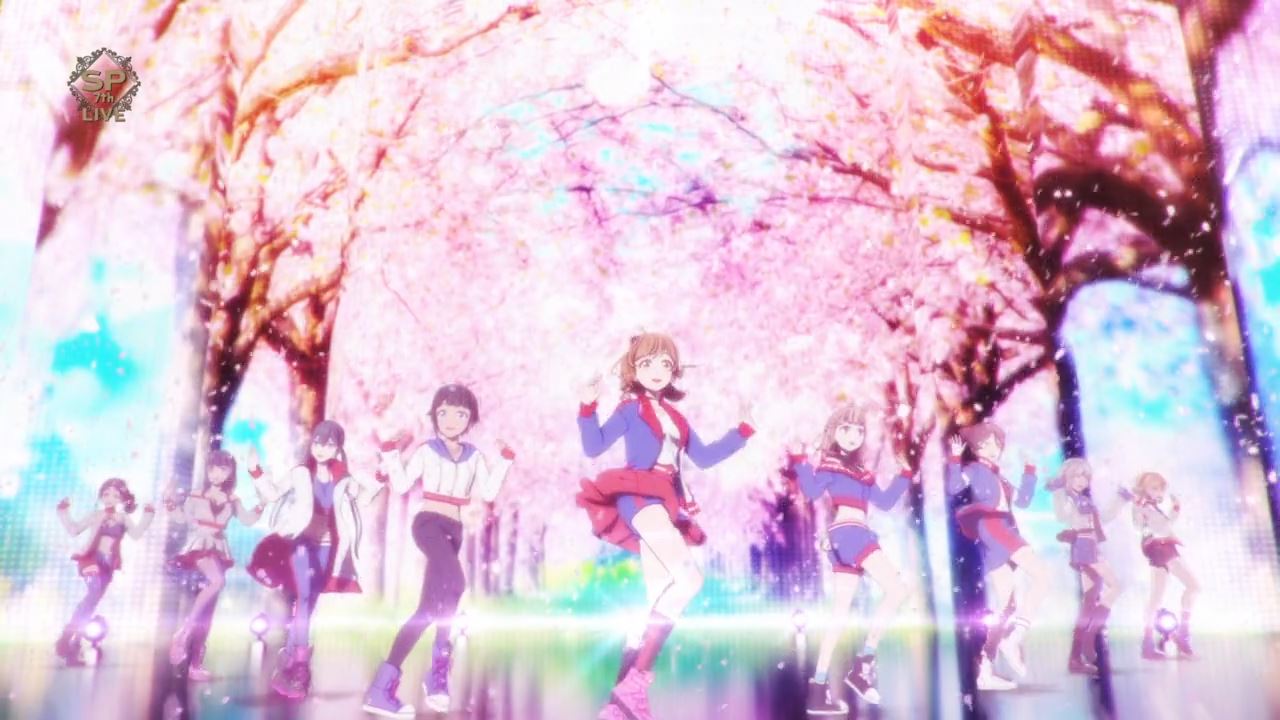 Anyways, here’s 9-tie where they perform “Glorious Days” which is the opening theme song of this show. Honestly, it would be better if the final episode didn’t play the usual opening sequence as “Glorious Days” is played twice.

While this dance sequence is still being animated in CGI, I wonder if 9-tie managed to reach 2,000,000 Cheerers? 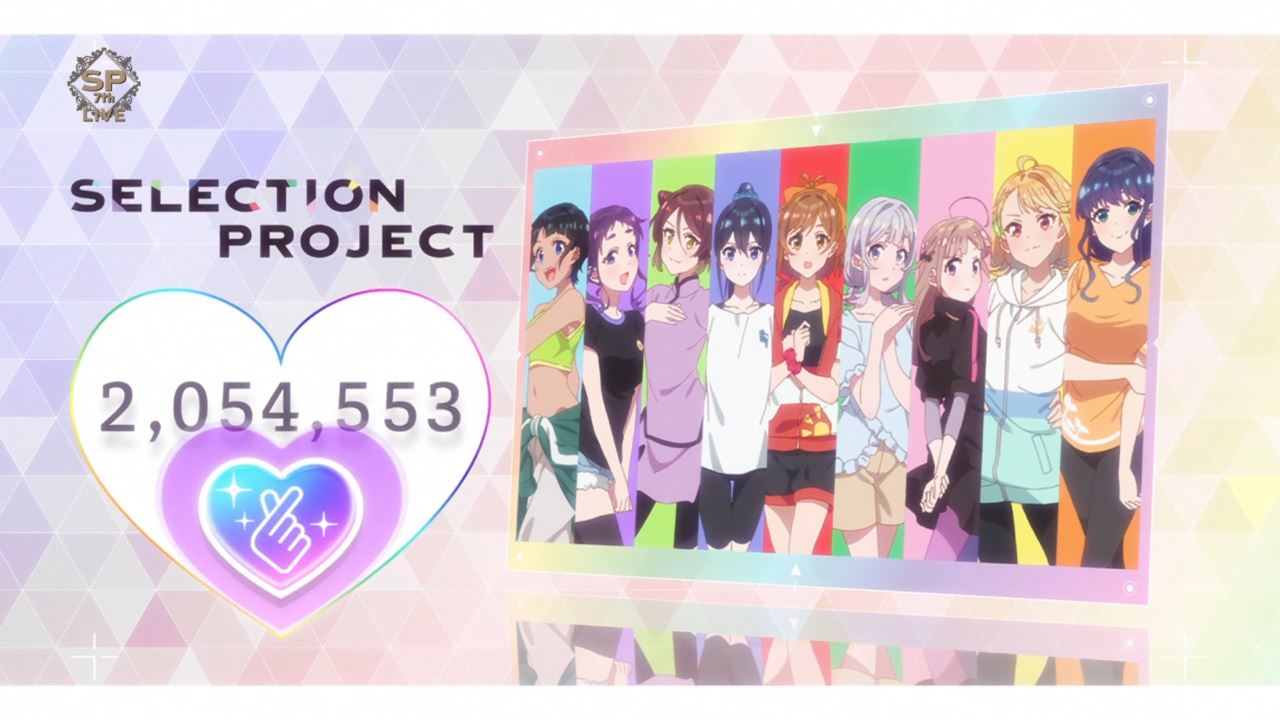 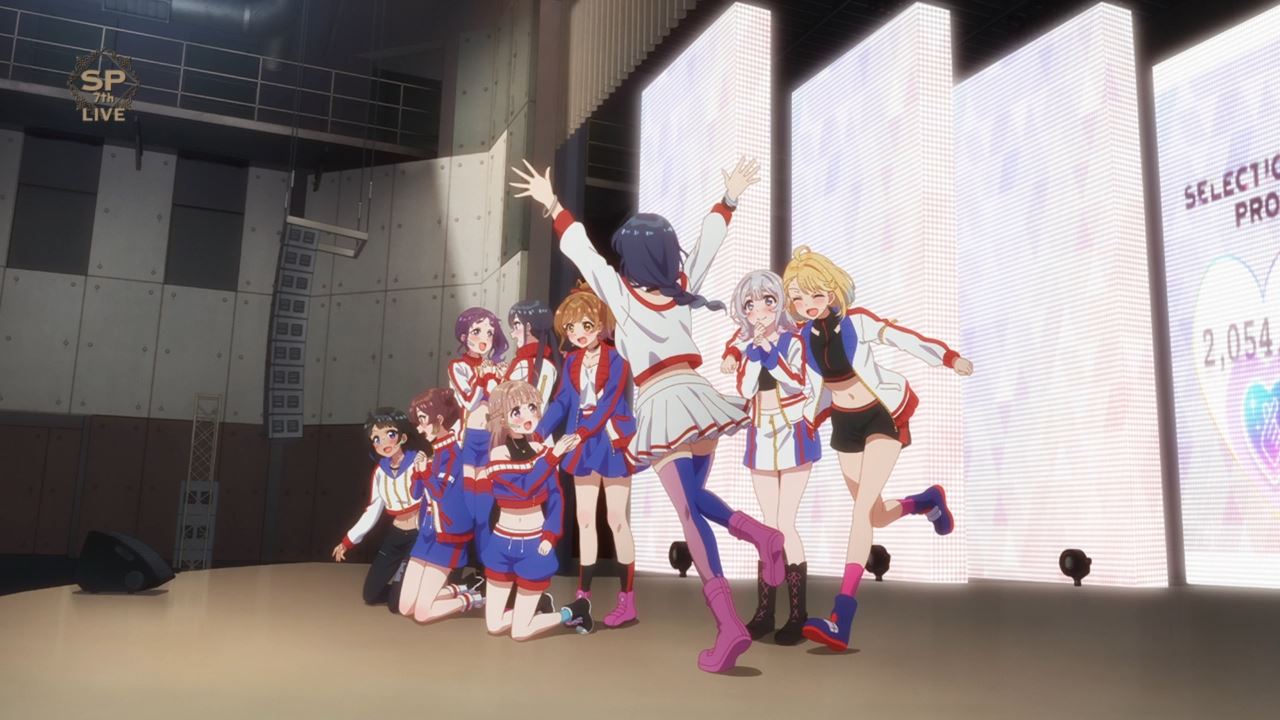 Unsurprisingly, they managed to reach the target amount as the contestants have won the 7th Season of Selection Project.

And the best part? No one was eliminated as all 9 contestants worked together to achieve their dream as idols. Congratulations! 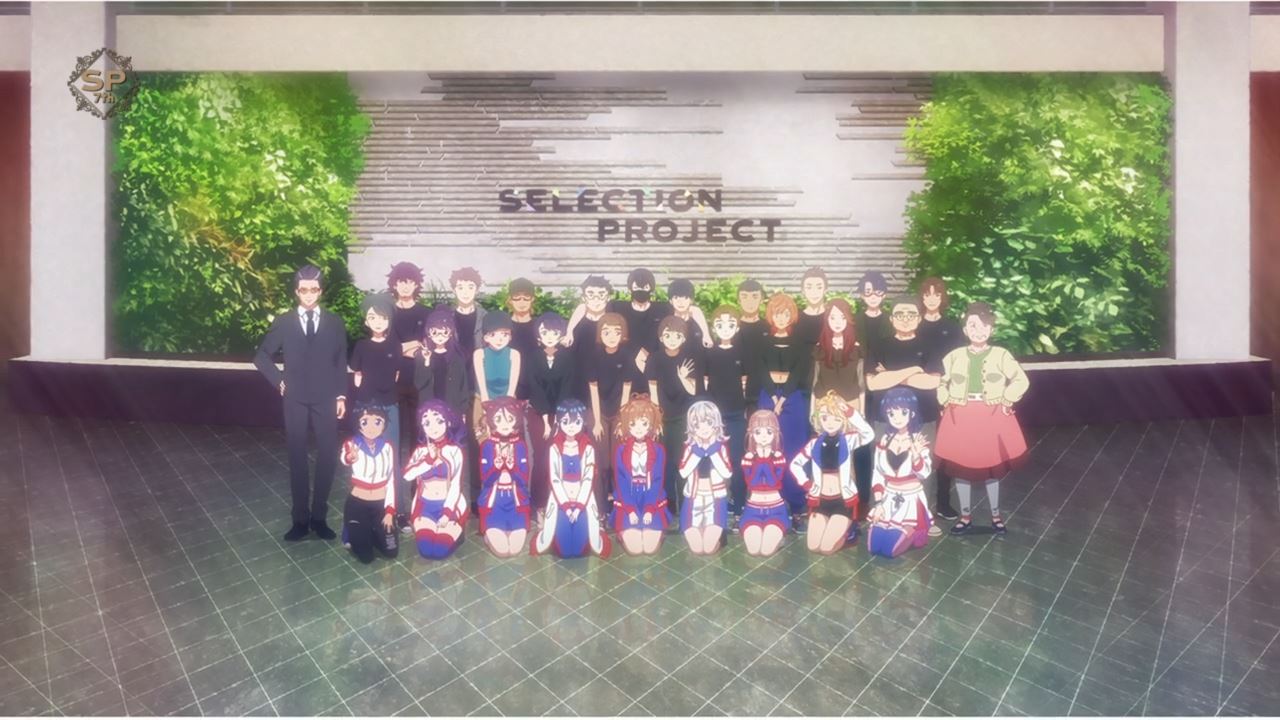 But yes, that’s the end of this anime series as the idol group 9-tie will not only take on Japan, but the rest of the world. Then again, I feel that Kadokawa’s next plan will be hosting a live concert and creating a mobile gacha game since they’re invested with the Selection Project franchise.

Now then, I feel that most people compare Selection Project with another idol-themed franchise called Idoly Pride in which both shows have almost the same plot structure. Of course, I haven’t watched Idoly Pride back then so I might check it out for myself in the future.

But as for my opinion on Selection Project, it’s pretty nice that one girl named Suzune Miyama became the literal heart that changed the mindset of all the contestants, turning them from being bitter rivals to inseparable companions. Heck, Suzune managed to change Rena’s behavior since they have a connection with the famous Akari Amasawa.

Unfortunately, I wish that the rest of the contestants needed more exploration, like Uta Koizumi’s somewhat strained relationship with her mother or why Shiori have to be the perfect girl for the Yamaga family. It would be nice if there’s a 2nd half of this show so that there’s more time for some of the characters to develop, but Kadokawa decided to present Selection Project as it is.

Anyways, I’m finished blogging this show as I congratulate the 9 contestants on winning Selection Project Season 7. Good luck to their professional idol career!