Posted on January 2, 2022 by benigmatica 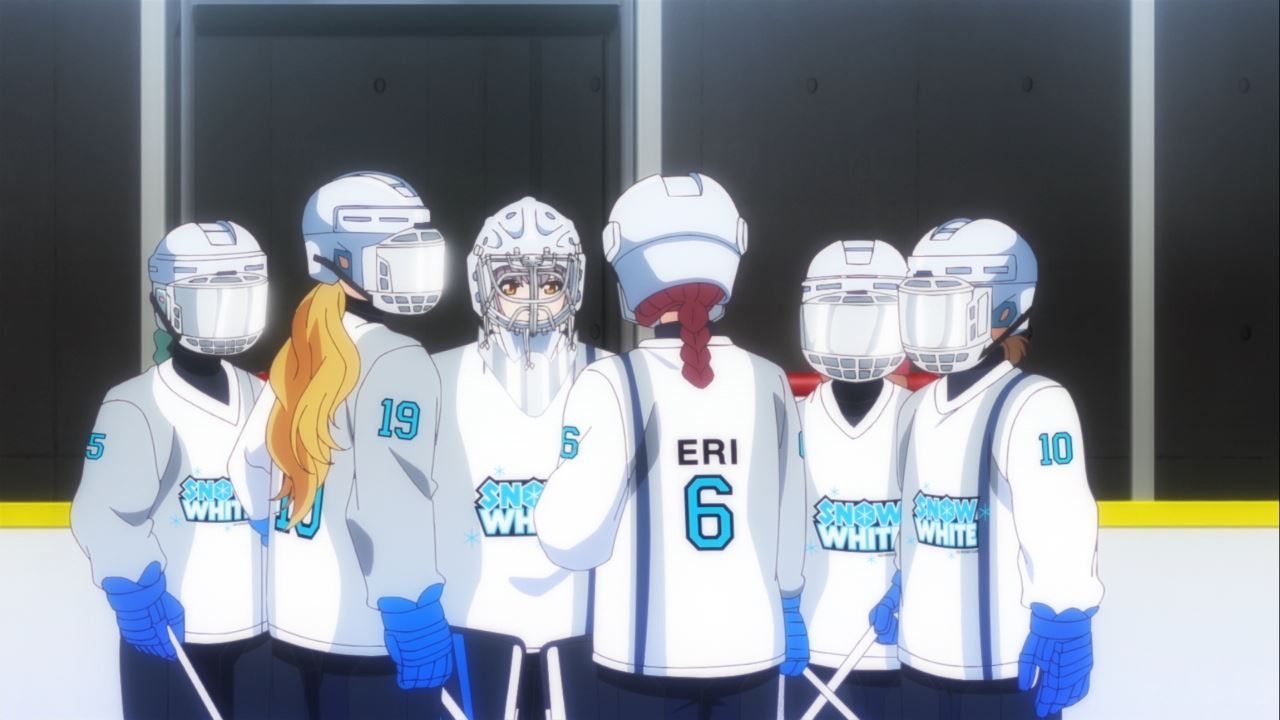 Let’s start with Kushiro Snow White where they have a 1-point lead over the Nikko Dream Monkeys. Of course, they can’t be overconfident just yet ’cause they need to play the rest of the match. 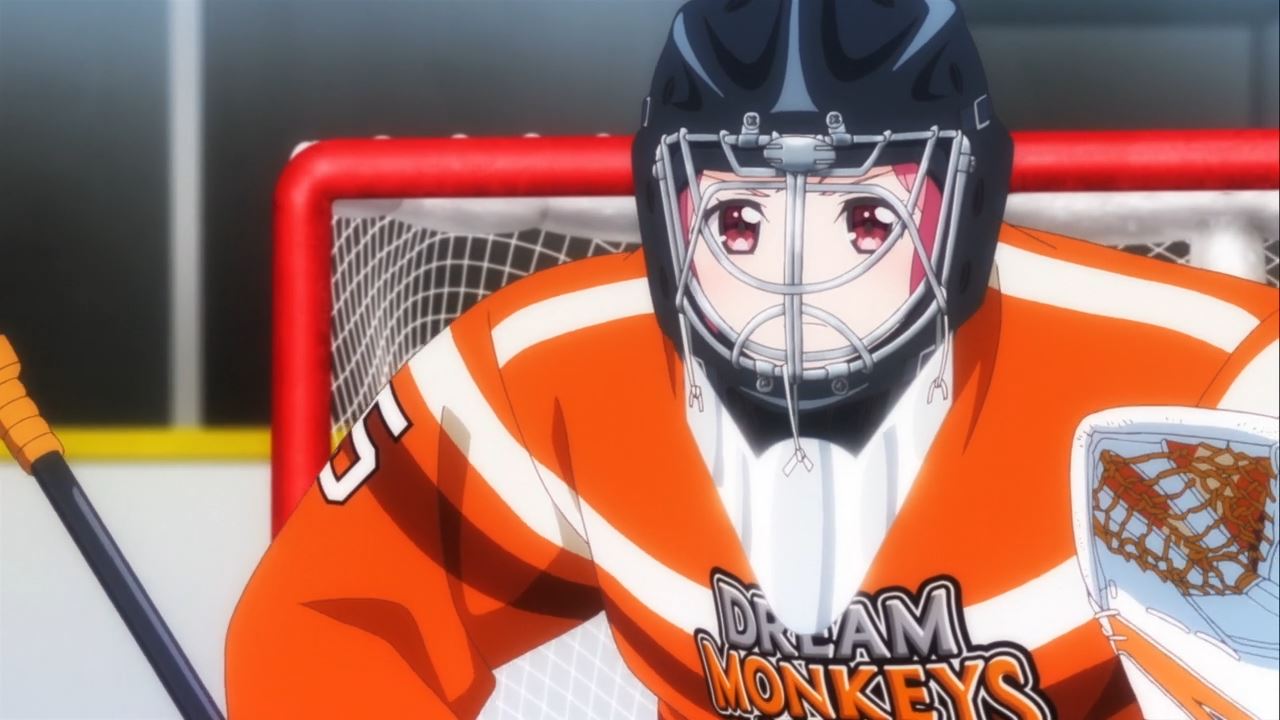 Anyways, here’s Kaoruko Yanagida where she won’t let anyone score another goal, especially from Maya Walker where Kaoruko got spooked out earlier in the 1st Period. 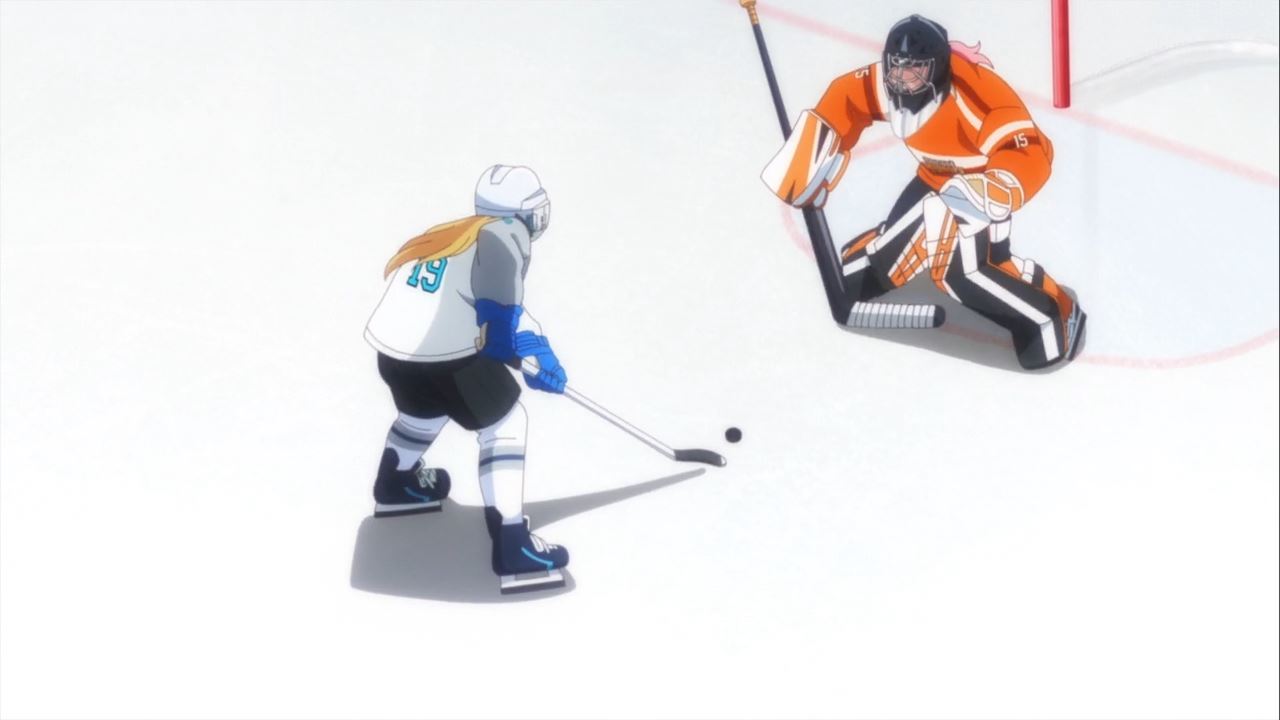 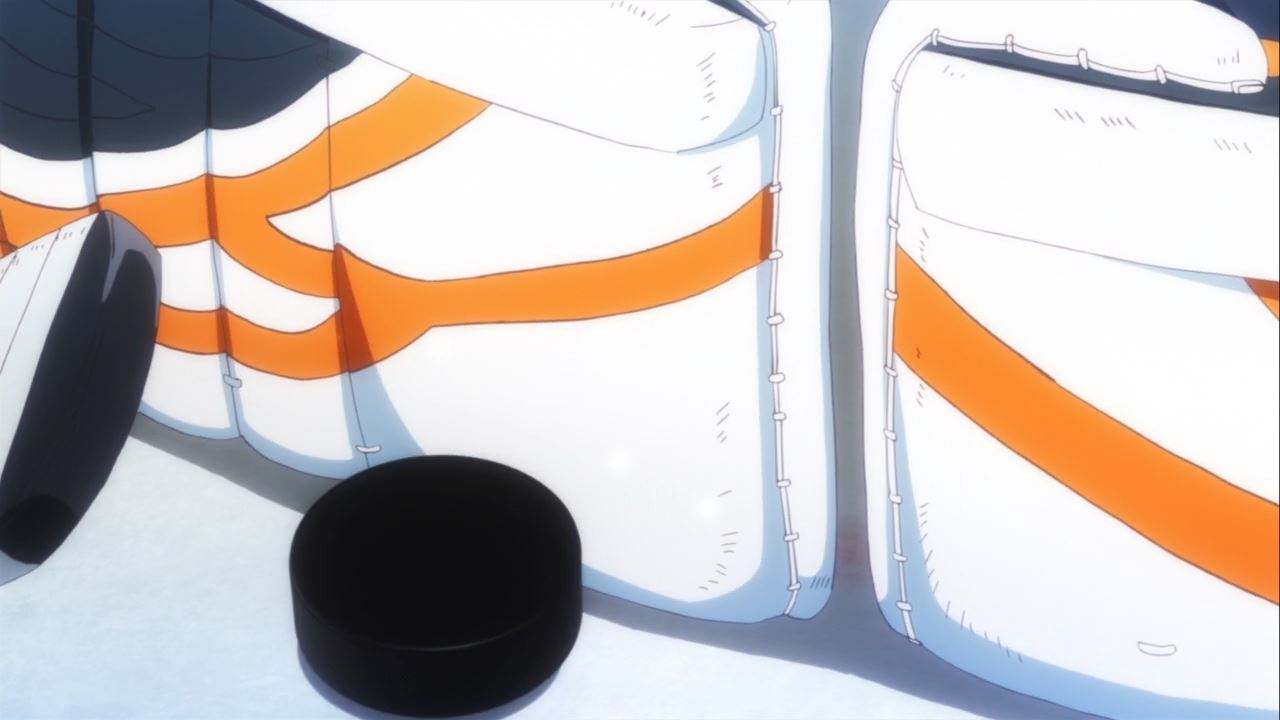 And thanks to Yoko Matsunaga’s advice, Kaoruko Yanagida managed to block the puck with her legs. Now, the only thing left to do is to even the score. 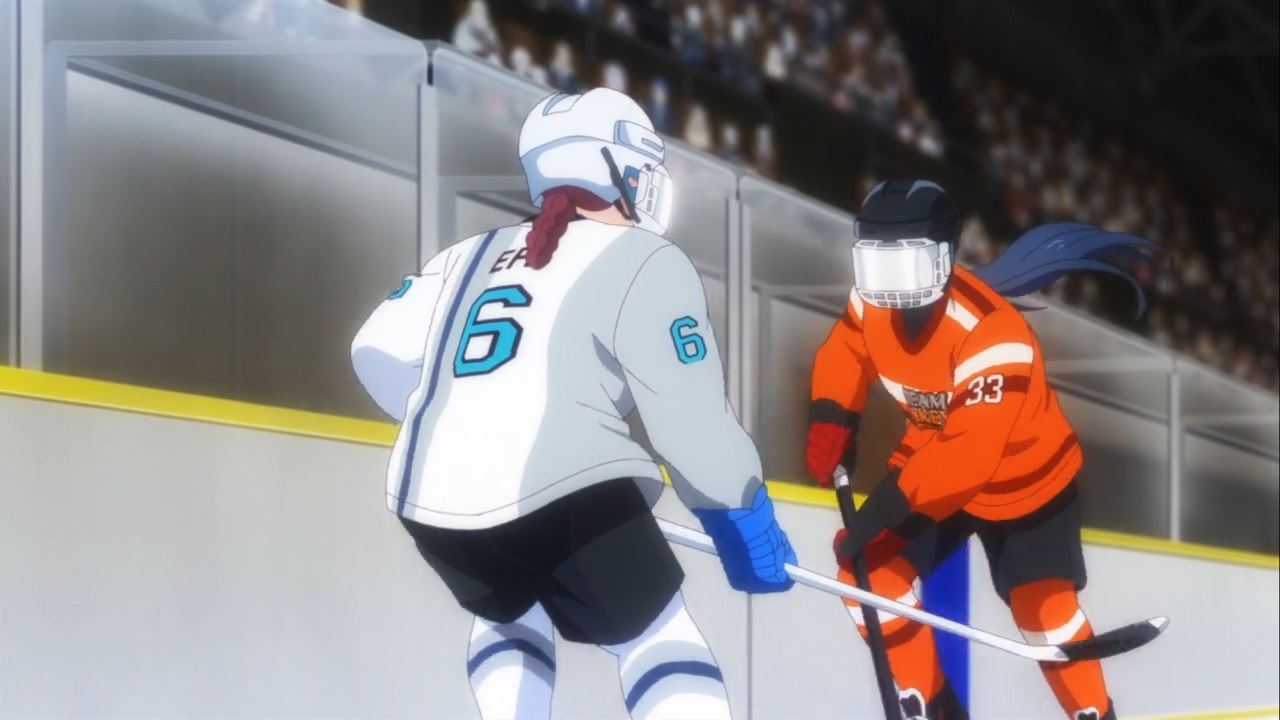 Now then, here’s Yu Kiyose where she takes the offensive. Of course, she’s not gonna slap the puck straight towards the goal net. 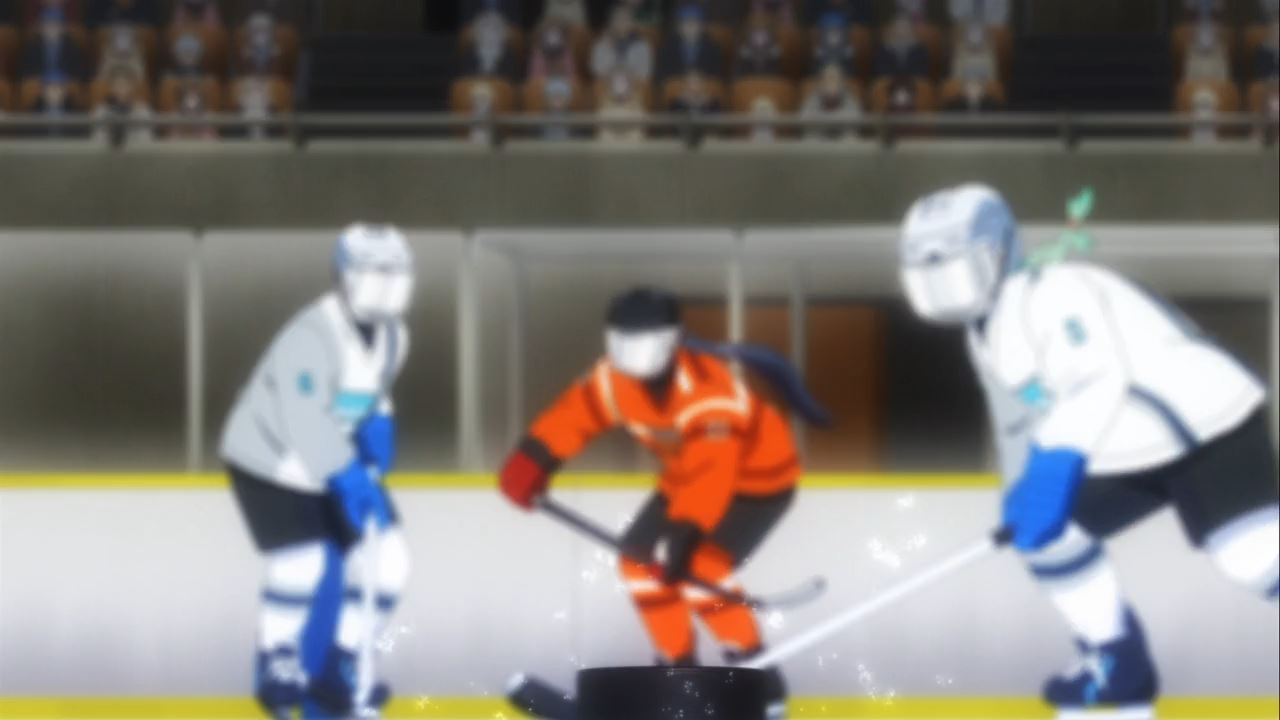 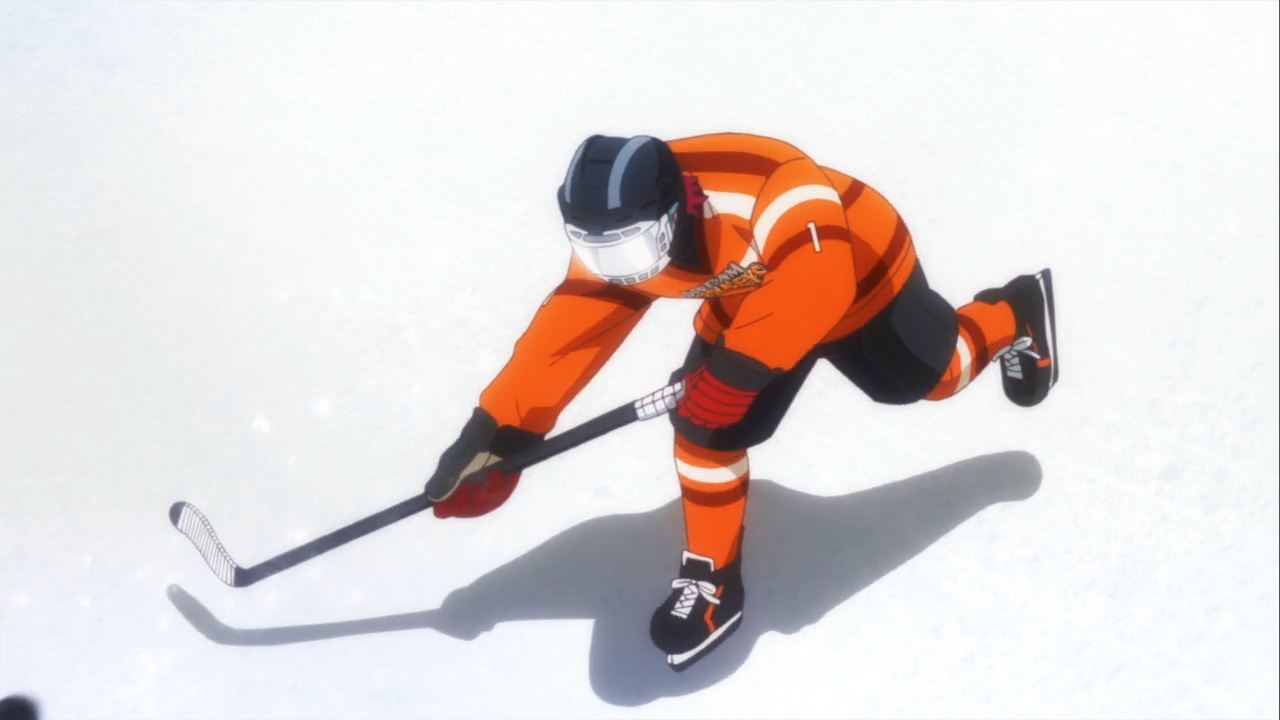 Instead, Kiyose pass it towards Manaka Mizusawa where she’ll slap the puck towards the net.

For Kushiro Snow White who got used to let the ace player carrying the entire game, it’s a shocker that their former teammate Yu-chan would let someone take the offensive. 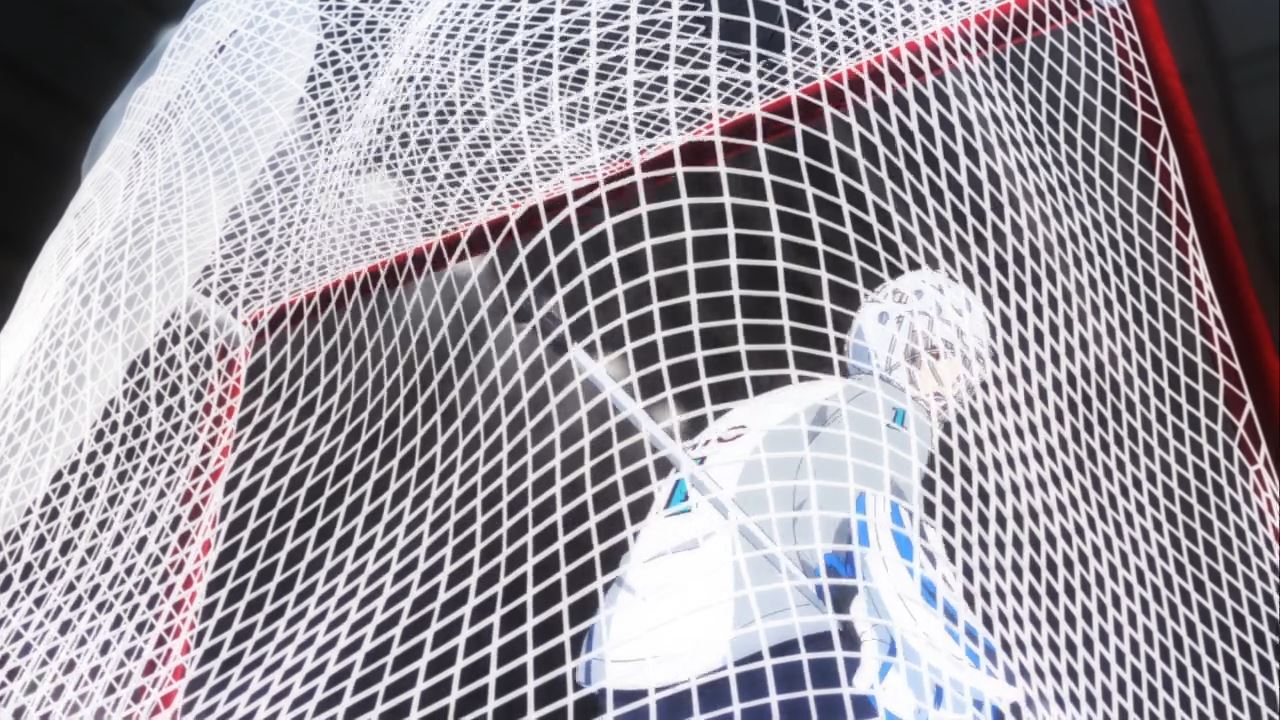 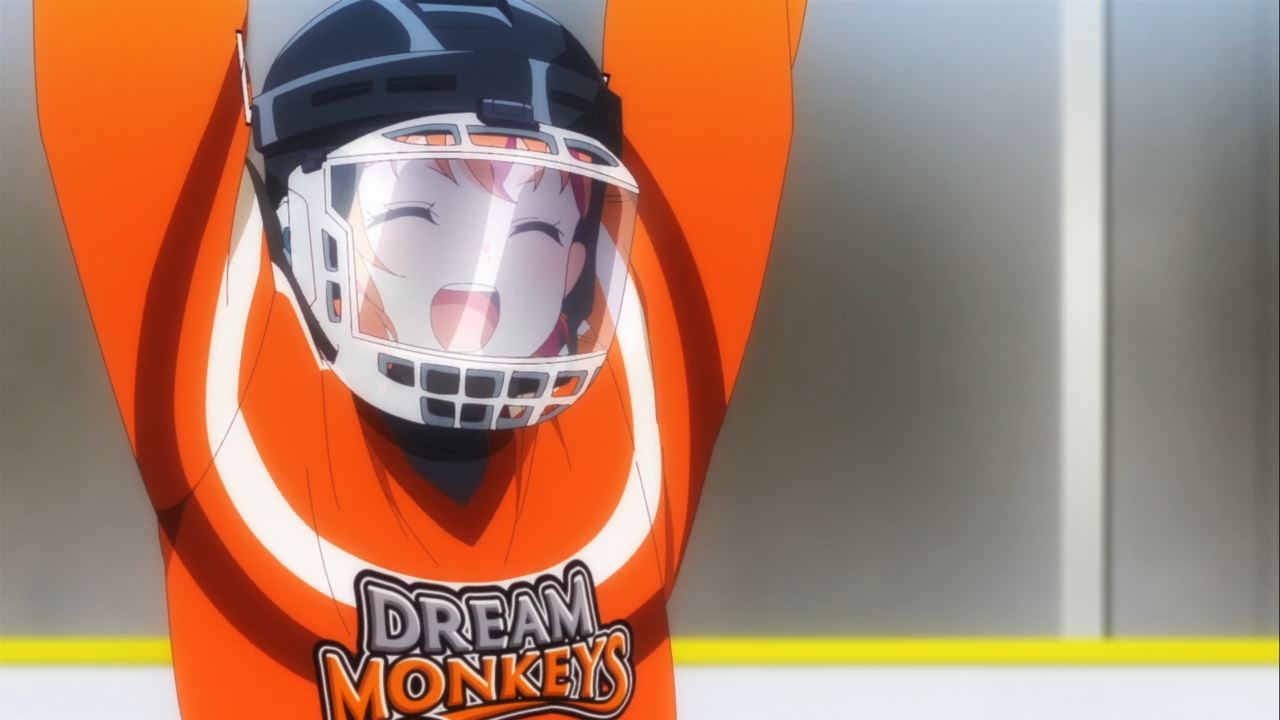 With that said, Manaka Mizusawa scored a goal against Kushiro Snow White as she’s happy that the Nikko Dream Monkeys are still fighting for the championship.

Now, the home team are now tied-up with Kushiro Snow White as the 1st Period as finally ended. 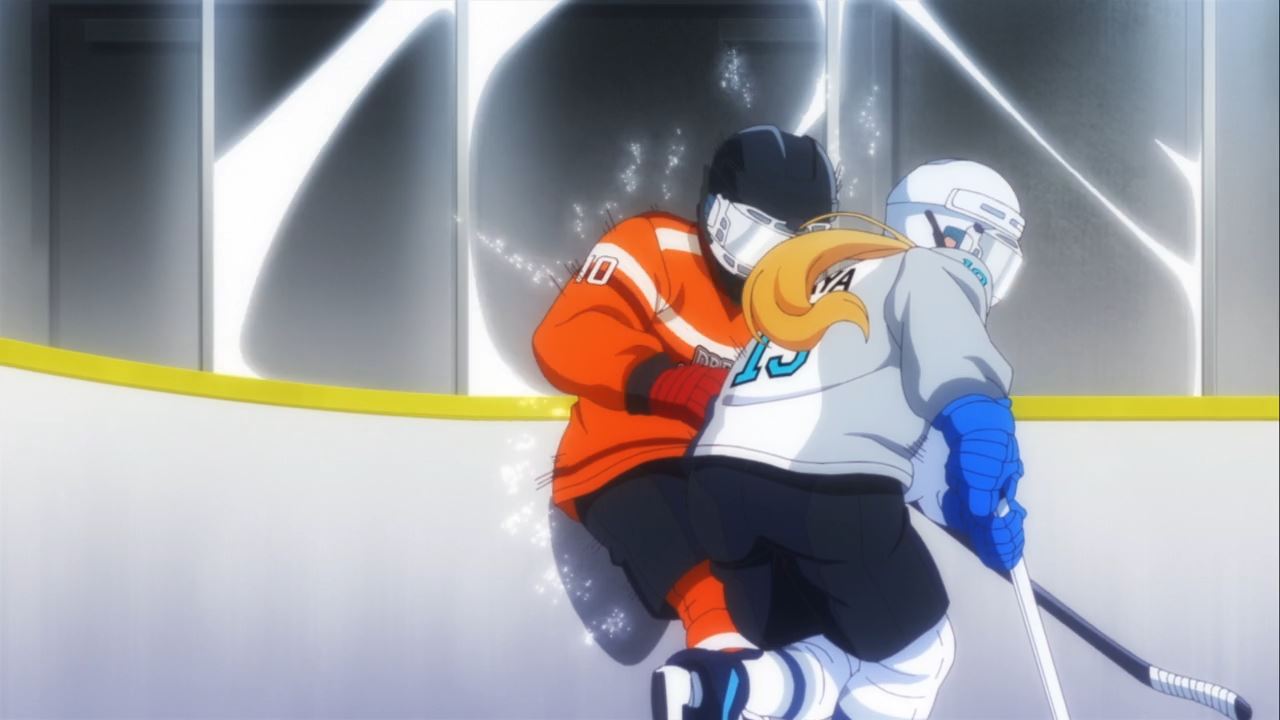 But on the 2nd Period, things took a turn for the worse for the visiting team when Maya Walker tackled Ayaka Mizusawa.

I’m not sure if Ayaka is okay, but Maya will get a penalty for that dangerous tackle. 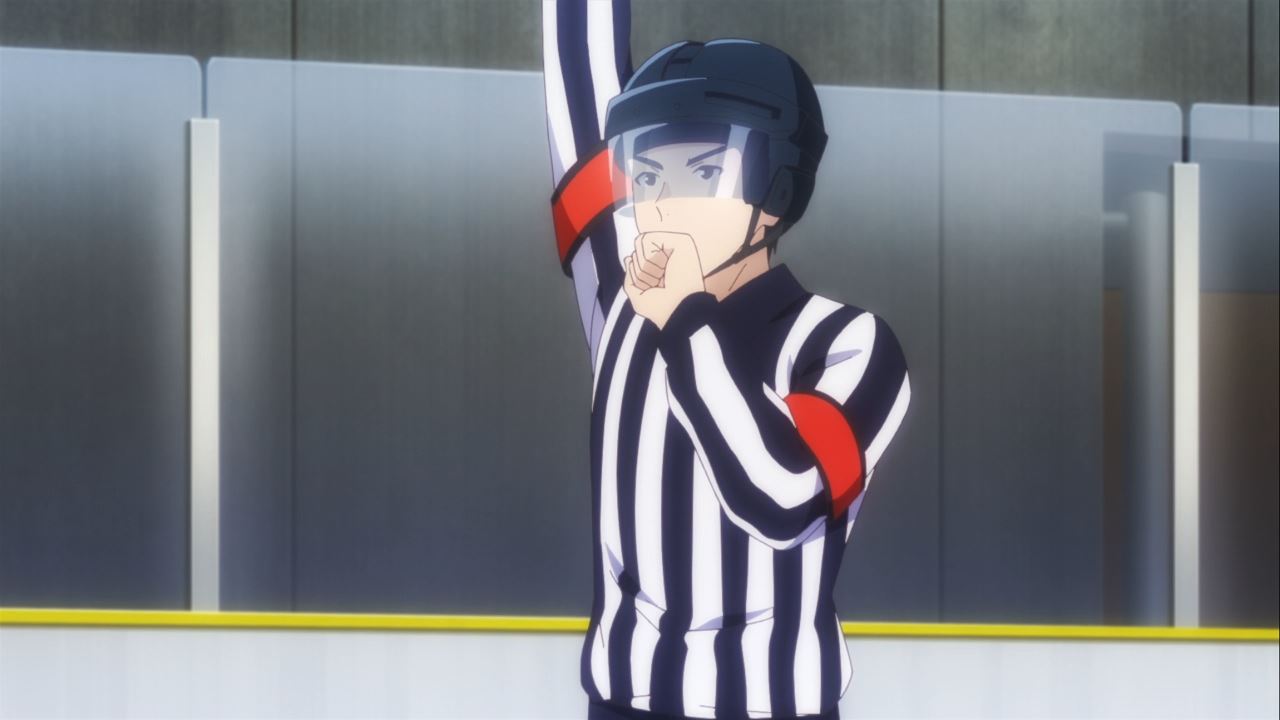 Anyways, Maya Walker was sent to the penalty box, meaning that Kushiro Snow White don’t have their ace player to play during the 2nd Period. 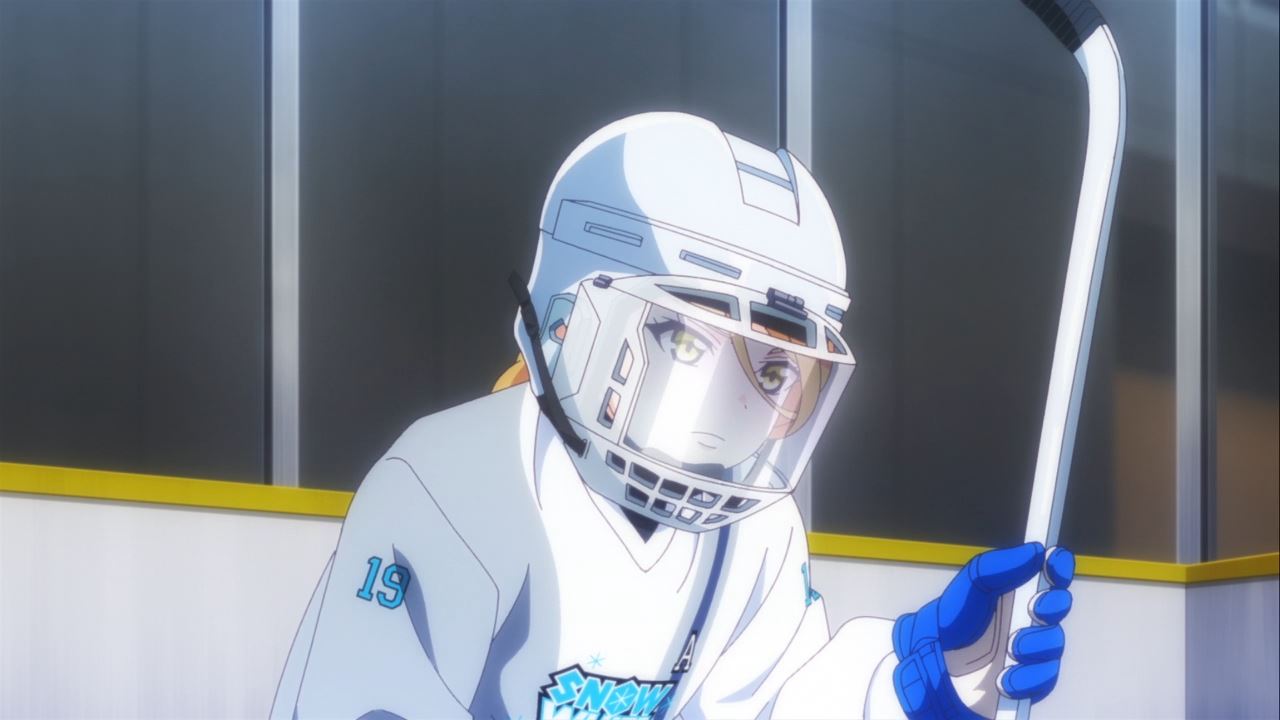 Of course with Maya gone, the Nikko Dream Monkeys will have their power play moment where they’ll score another goal without Kushiro’s ace player. 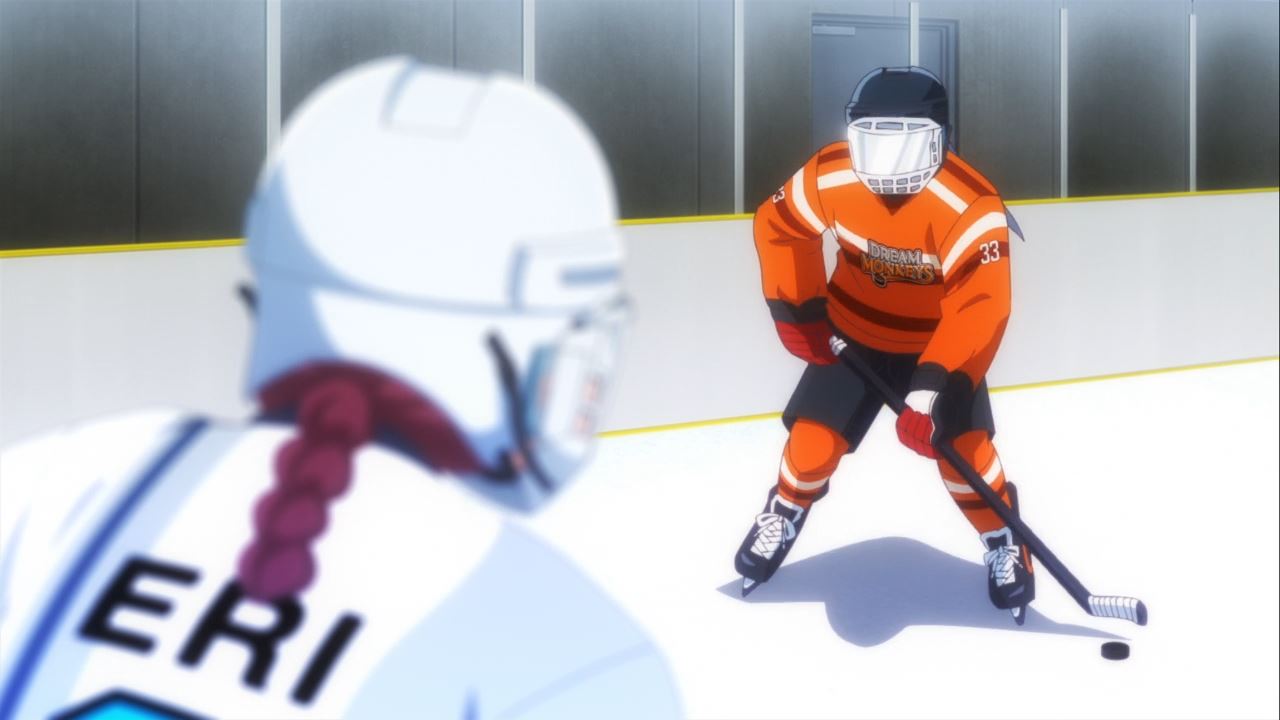 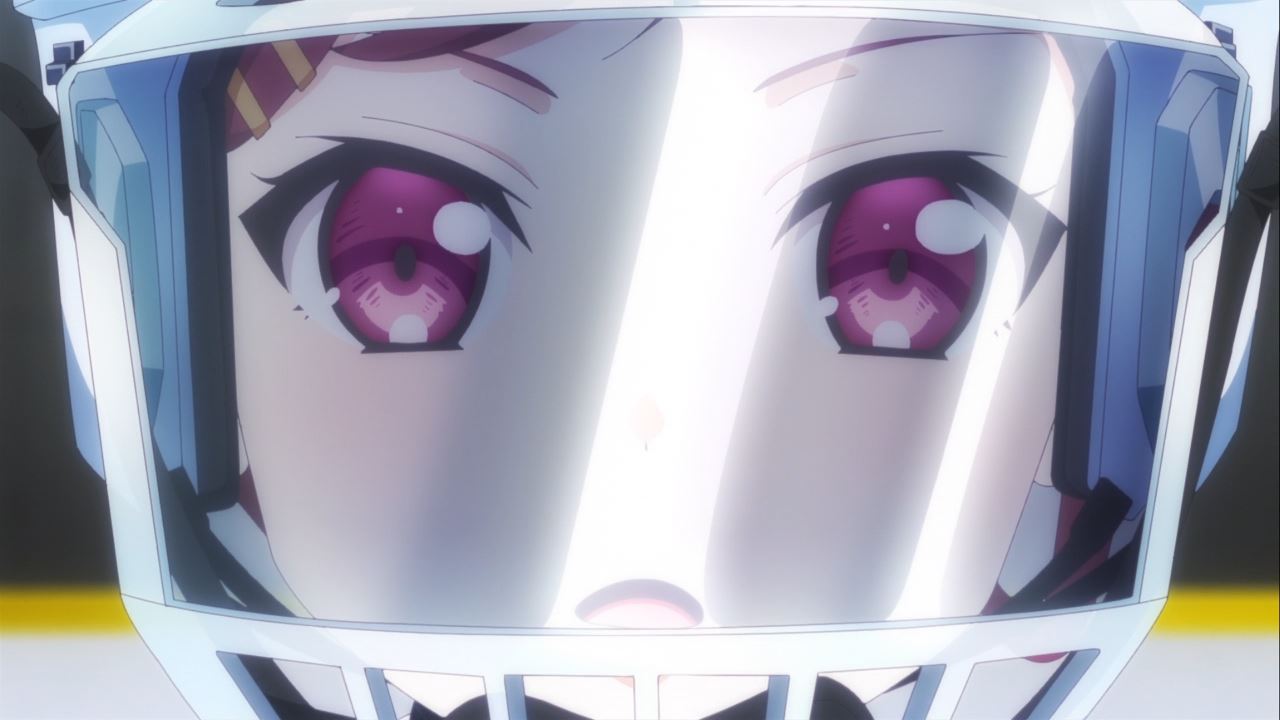 Meanwhile, looks like Eri Yamanaka is aware that she and her fellow teammates are not dealing with the usual Yu Kiyose anymore.

Considering that they relied on their star players to win games, this is a real wake-up call for Kushiro Snow White as they’re pretty much screwed as they can’t do anything without Maya Walker around. 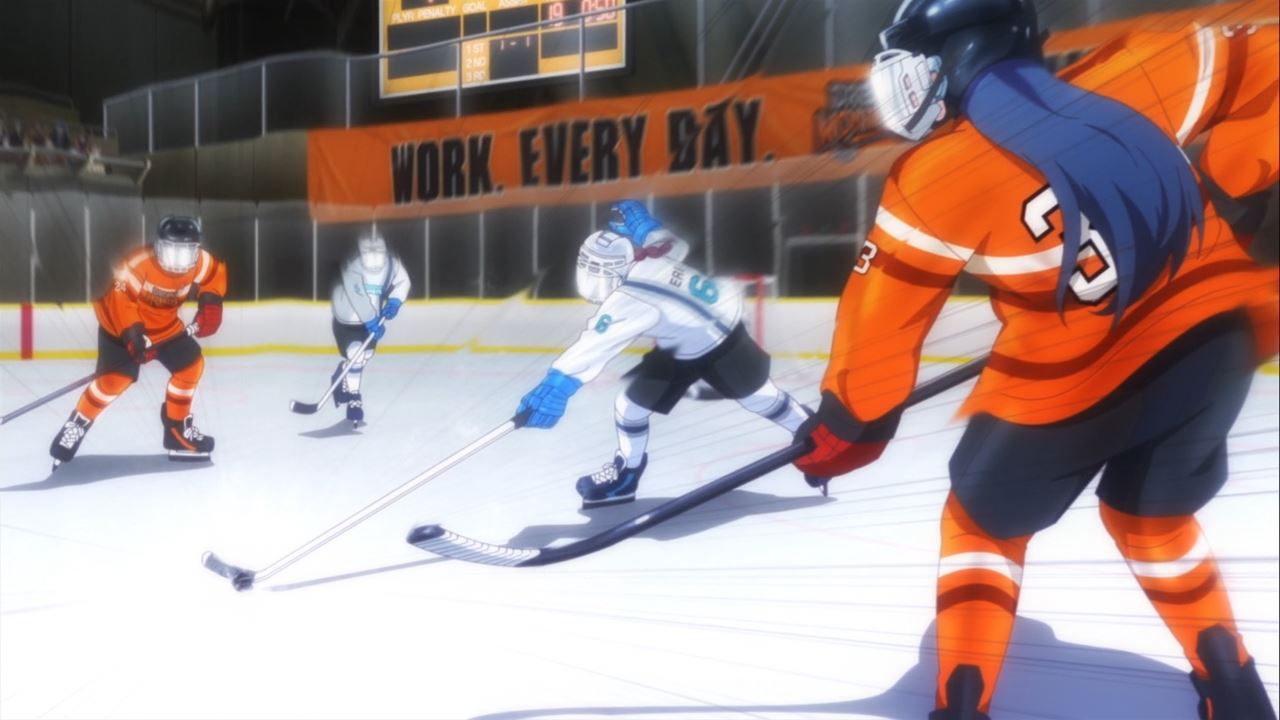 Thus, Eri Yamanaka decides to step up her game and tries to intercept every pass made by Yu Kiyose. Well, Eri is now aware that Yu-chan is a real team player.

Anyways, Maya Walker returned to the ice rink, but the 2nd Period ends with both sides having one goal apiece. 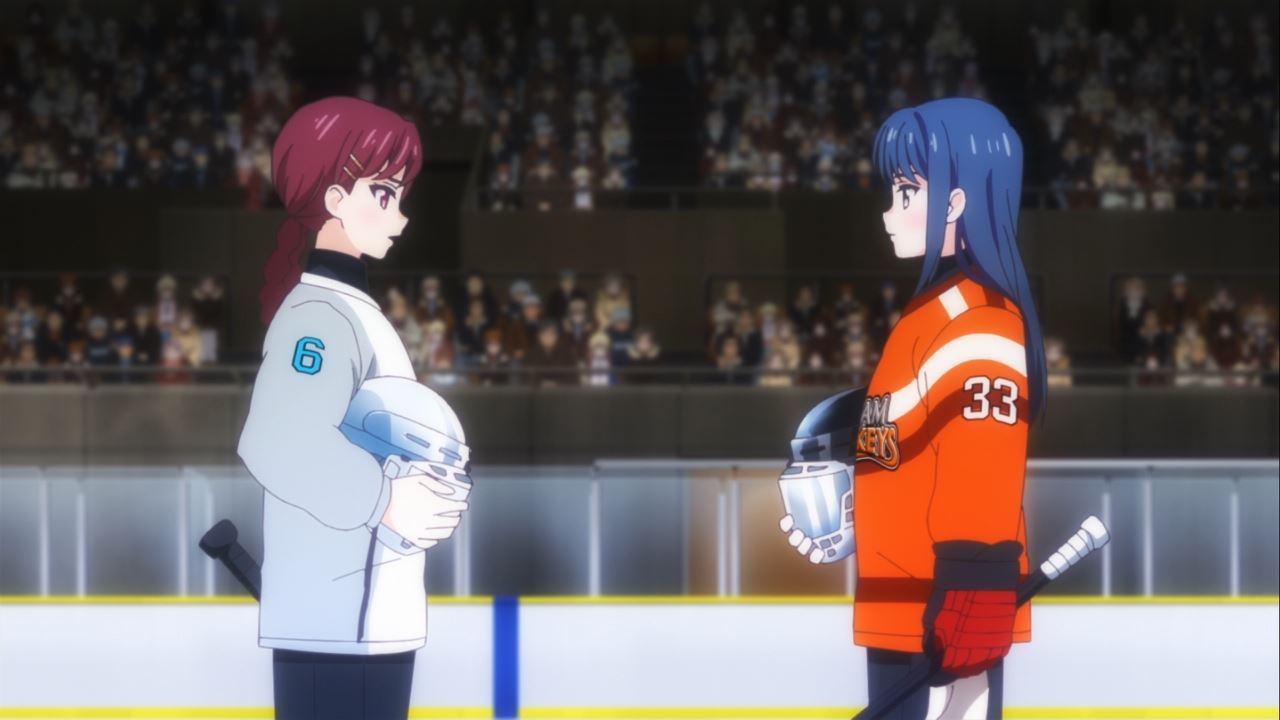 Just before the 3rd Period, Eri Yamanaka had a brief chat with Yu Kiyose in which she realized how foolish she is when Yu-chan called them out for over relying her back in the day.

Now that she realize her mistake on not believing Kiyose’s words previously, Yamanaka will make it up by forcing her teammates to play their part instead of letting Maya carrying the entire game. 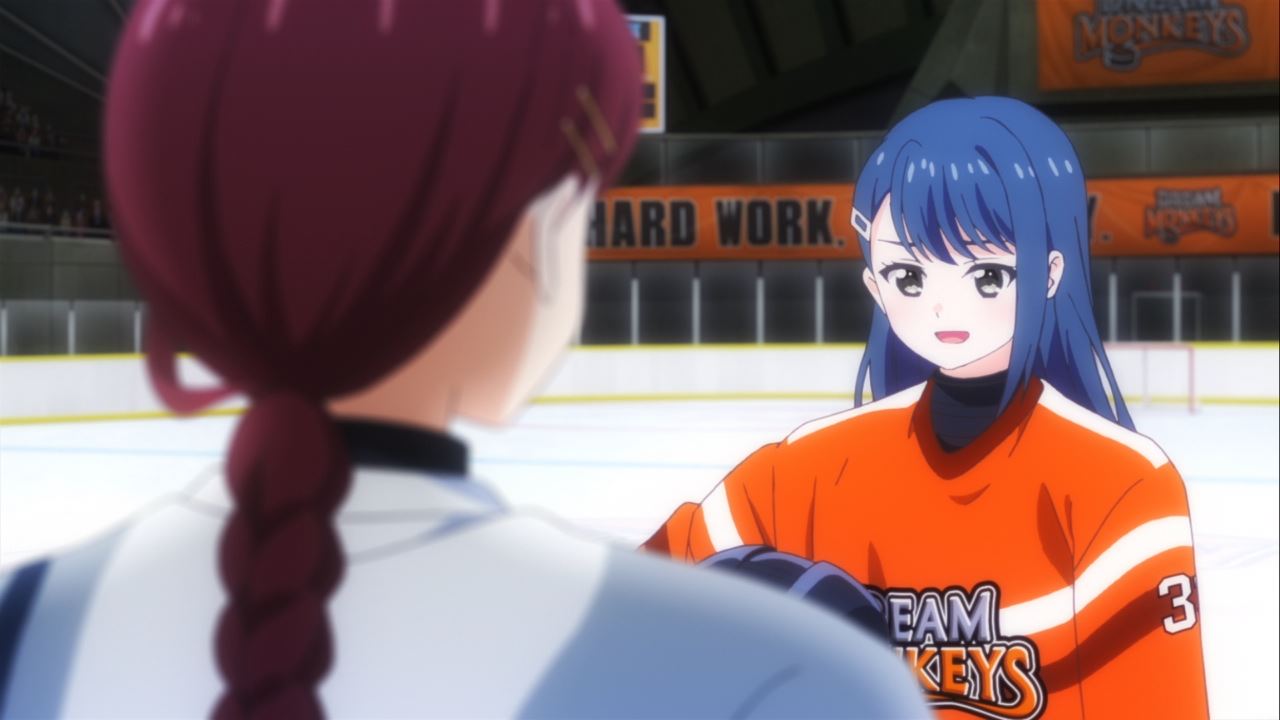 Of course, Yu-chan told Eri that her team won’t lose as they’ll work together to win the championship and reach A Division. Oh I wish them good luck on beating Kushiro Snow White. 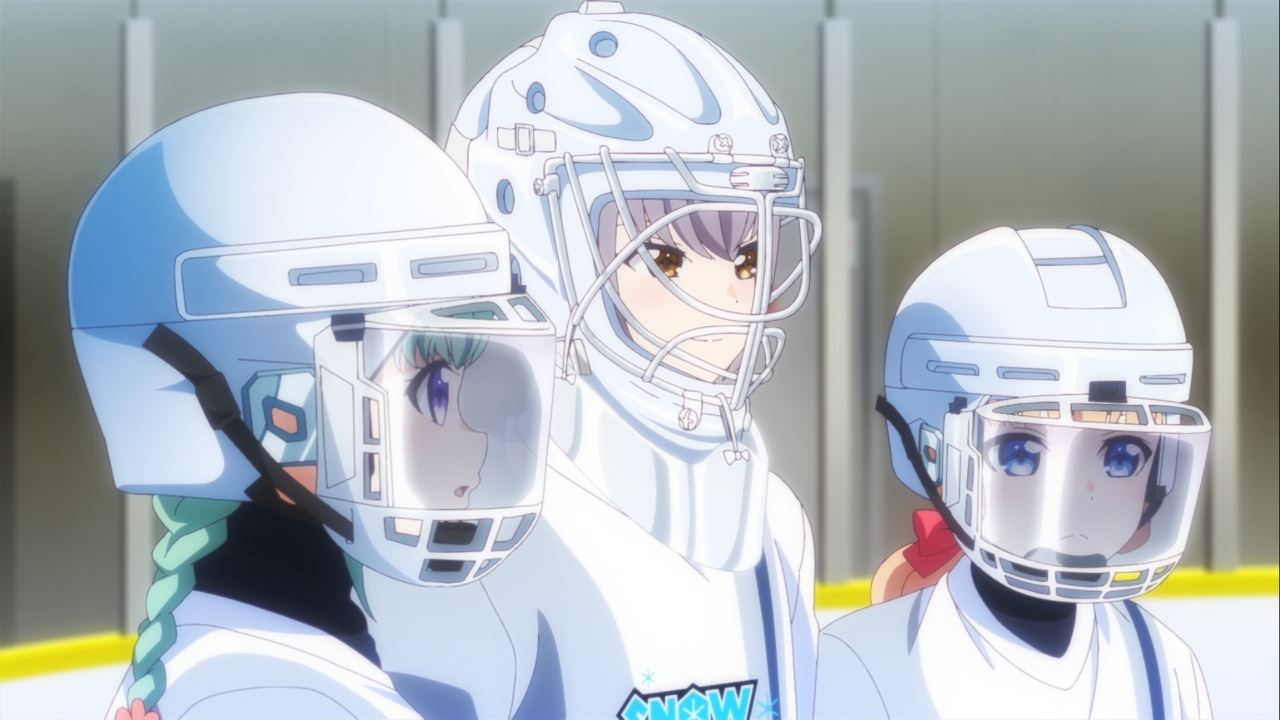 But speaking of the visiting team, looks like Eri’s teammates have realized their foolishness as their coach point them out on not to rely on their star player to win the game. 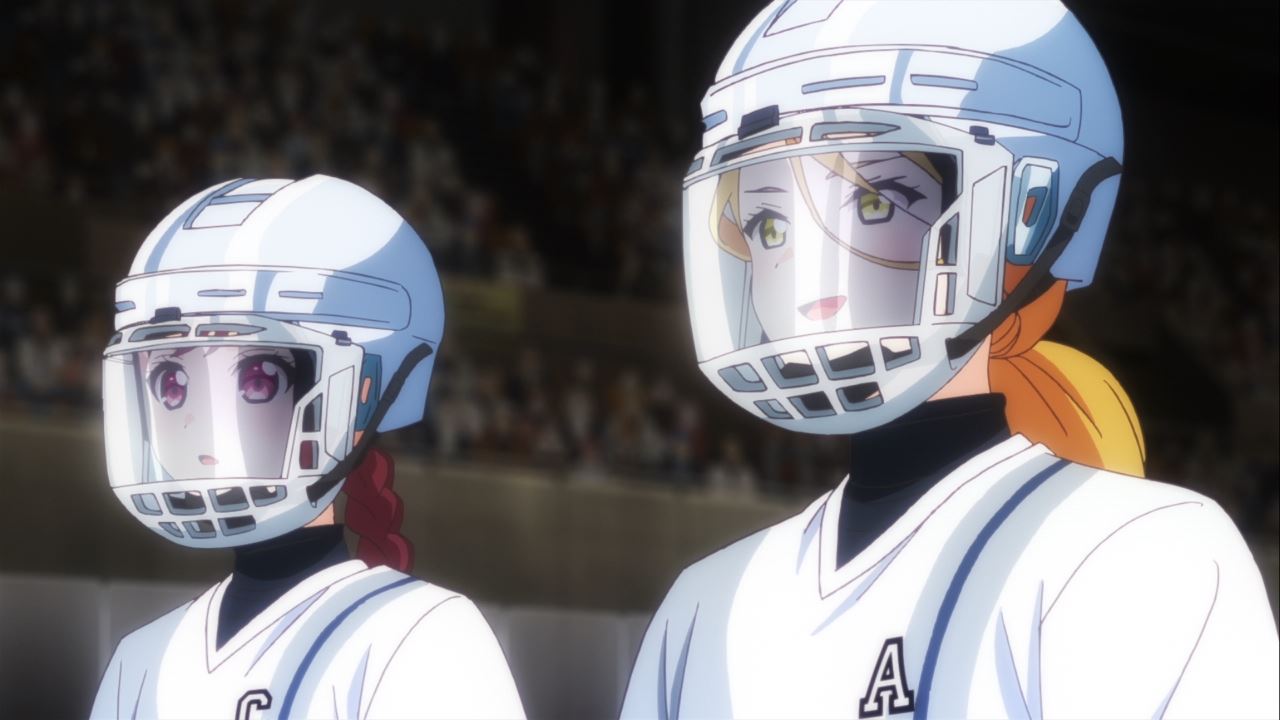 And here’s Maya Walker where she really understands how teamwork is important to win games, but is it too late for Kushiro Snow White to dominate the championship game against the home team? We’ll find out! 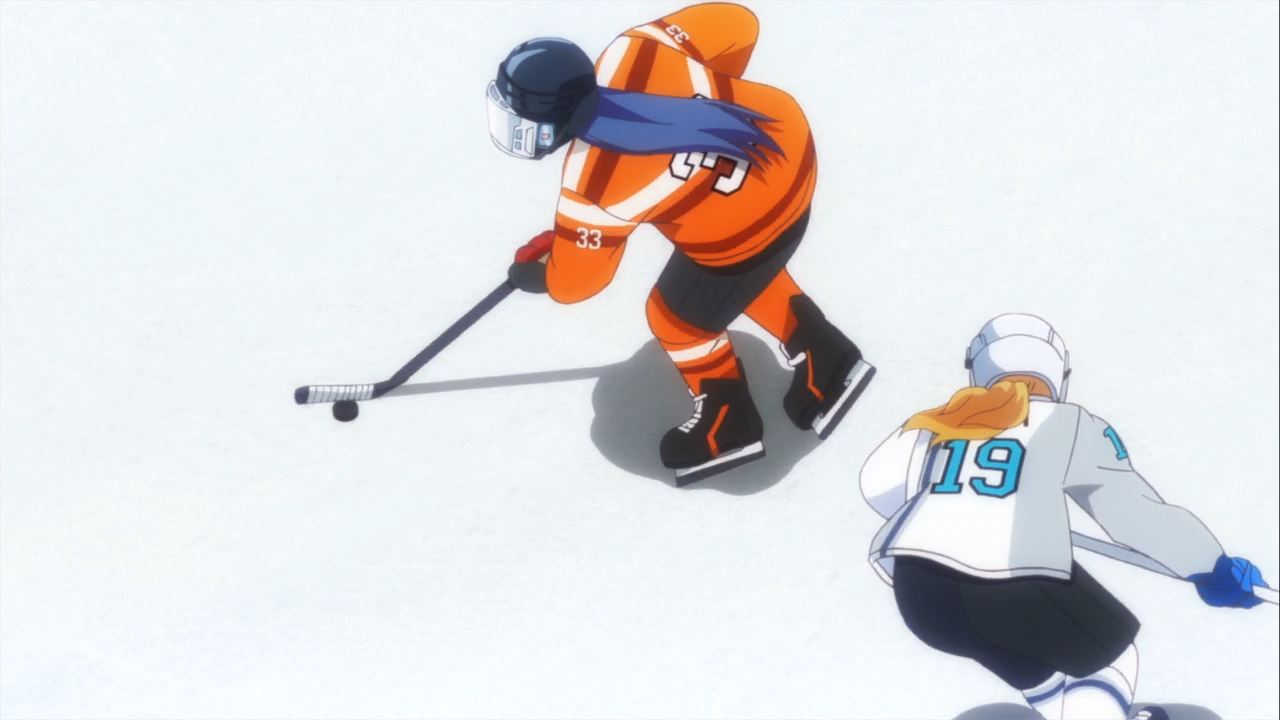 Anyways, it’s time for the 3rd Period where the Nikko Dream Monkeys are trying to score the winning goal against Kushiro Snow White.

Of course, the visiting team are really fierce as they try to defend their goal net until the period is over, therefore the championship match will settle for a penalty shootout to determine the winner. 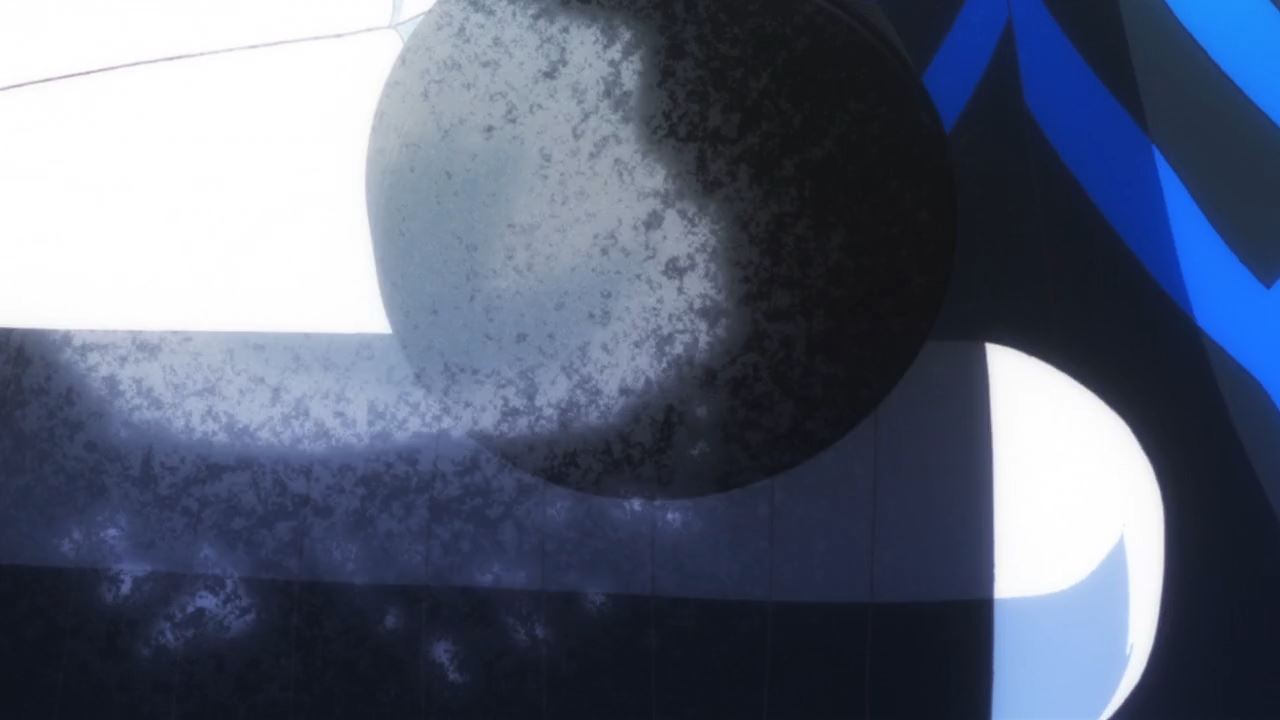 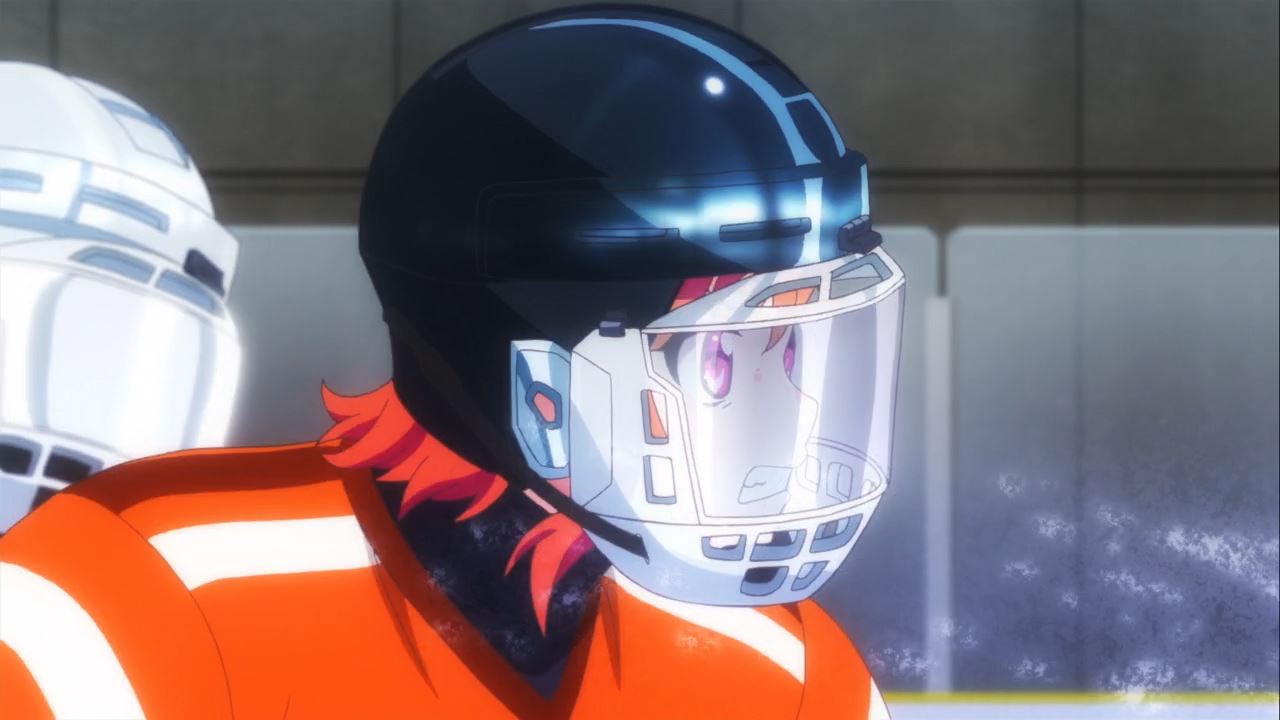 Unfortunately for Kushiro Snow White, the Nikko Dream Monkeys are not planning to take the penalty shootout as they’re gonna score the winning goal once and for all.

For Manaka Mizusawa, she’s gonna pour her heart and soul onto this winning goal as Manaka’s bond with her friends have gone stronger ever since they played ice hockey a year ago. 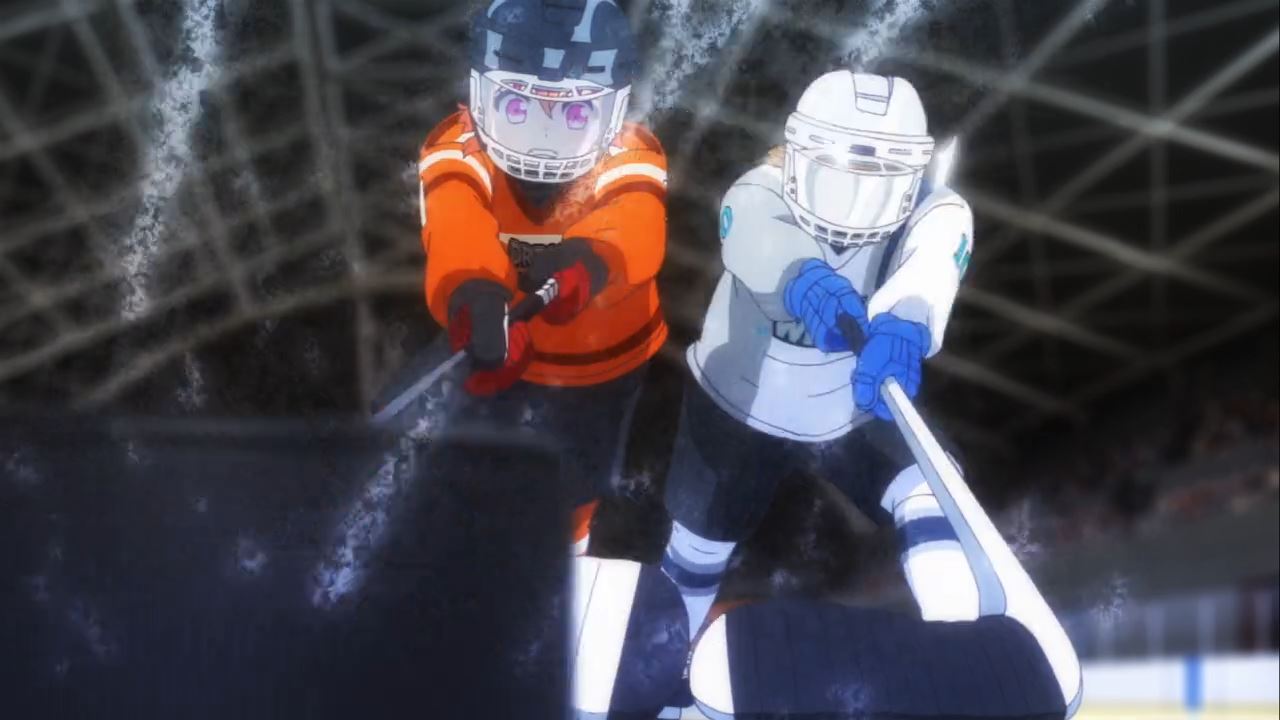 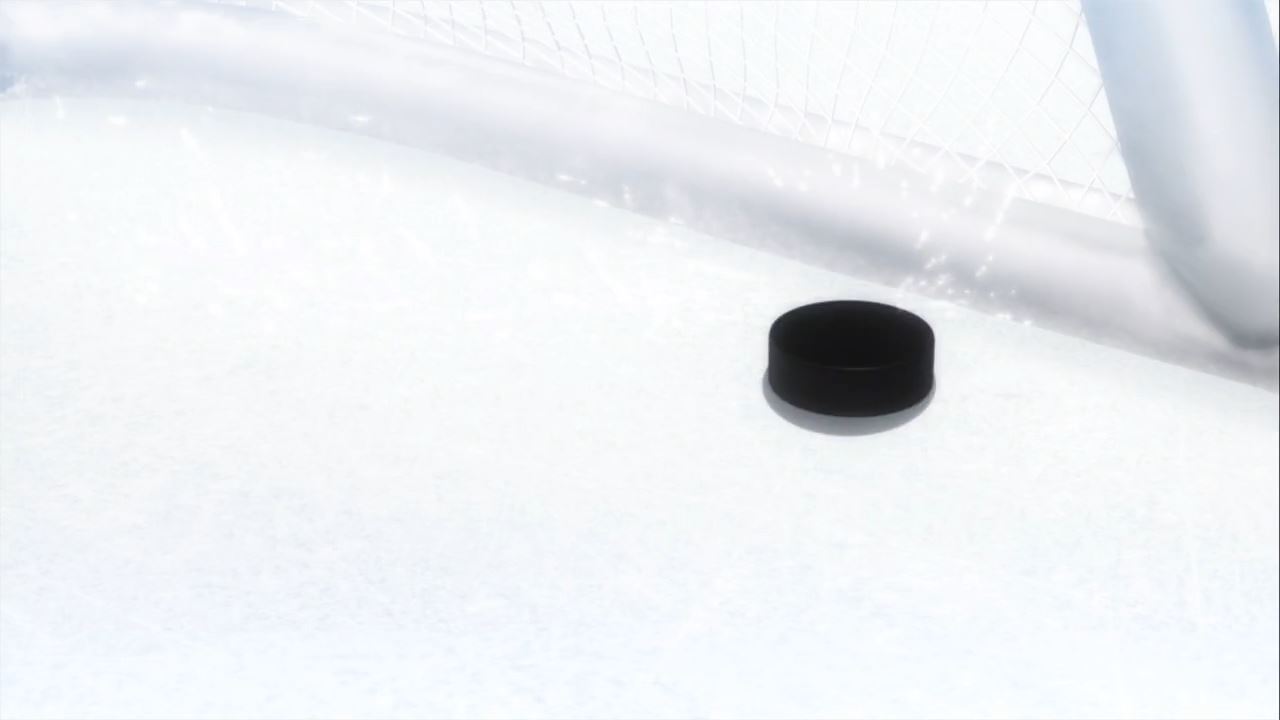 Anyways, Manaka took the puck and slap it towards the goal net. But does it count before the timer runs out? 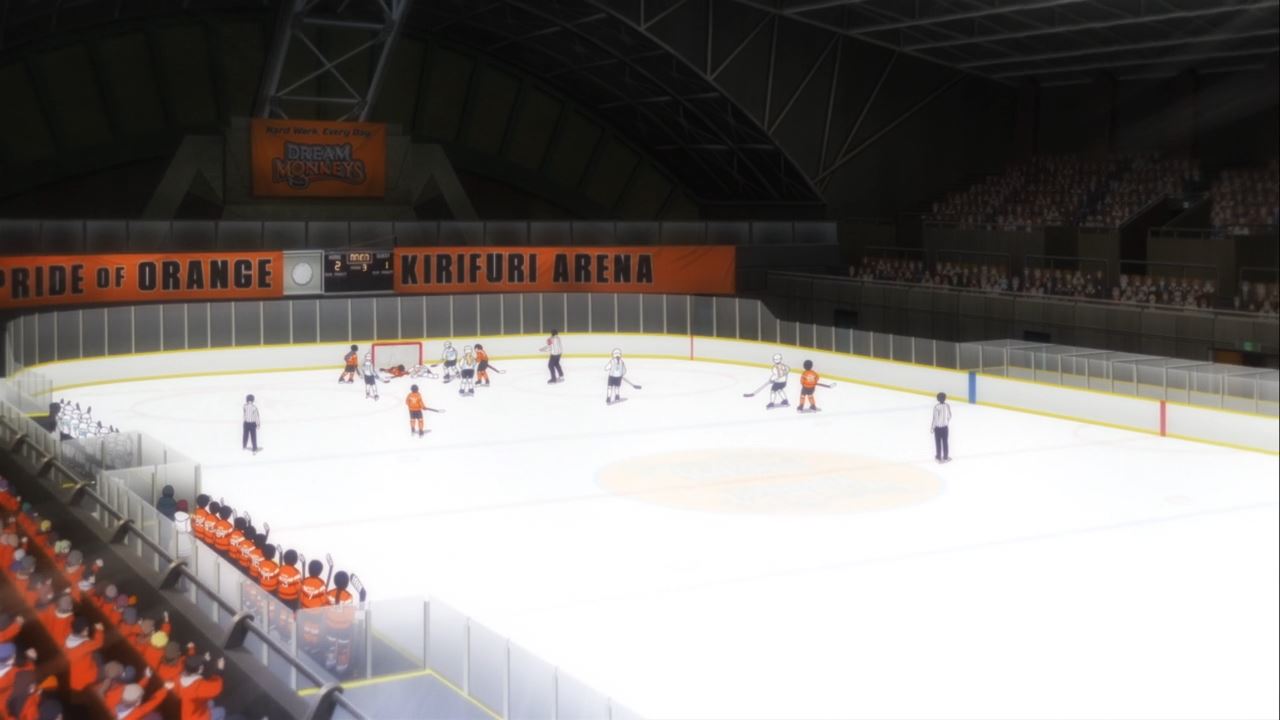 Well, it counts as a goal for the Nikko Dream Monkeys as they finally won over Kushiro Snow White with the score of 2-1. 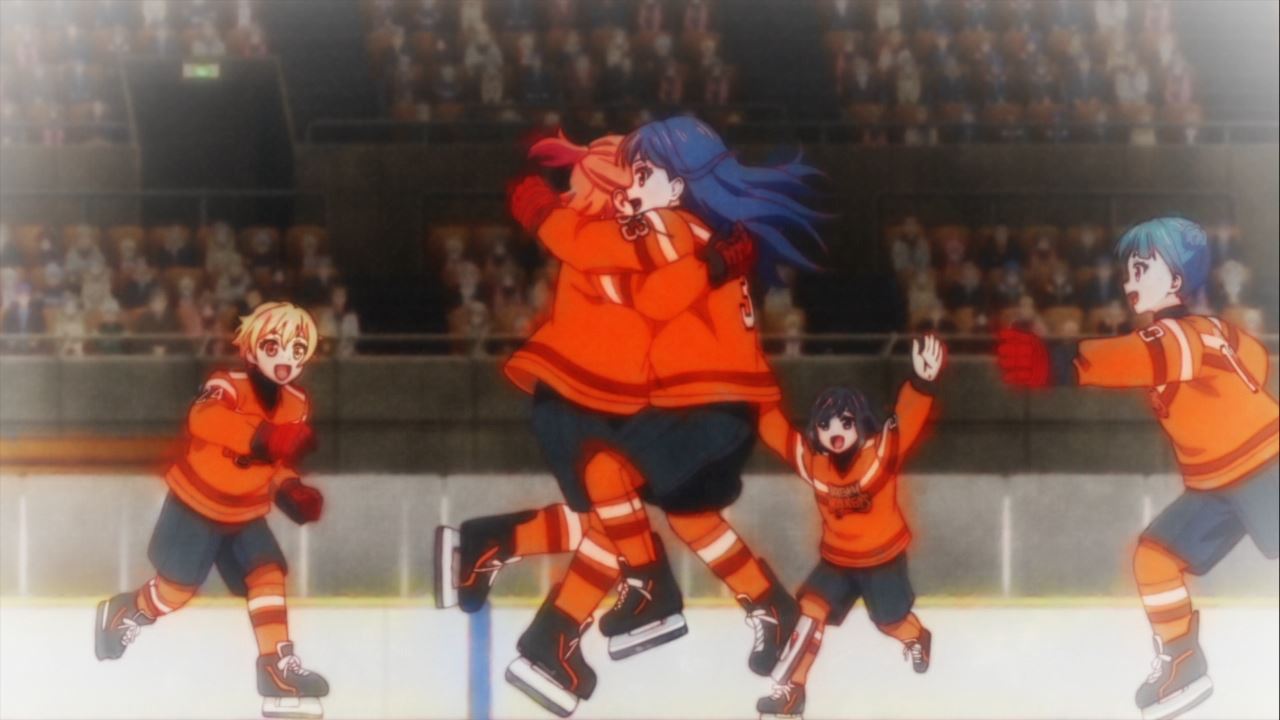 For the home team, it’s pure excitement as the underdog have won the championship, not to mention that they’ll take on top teams in the A Division. 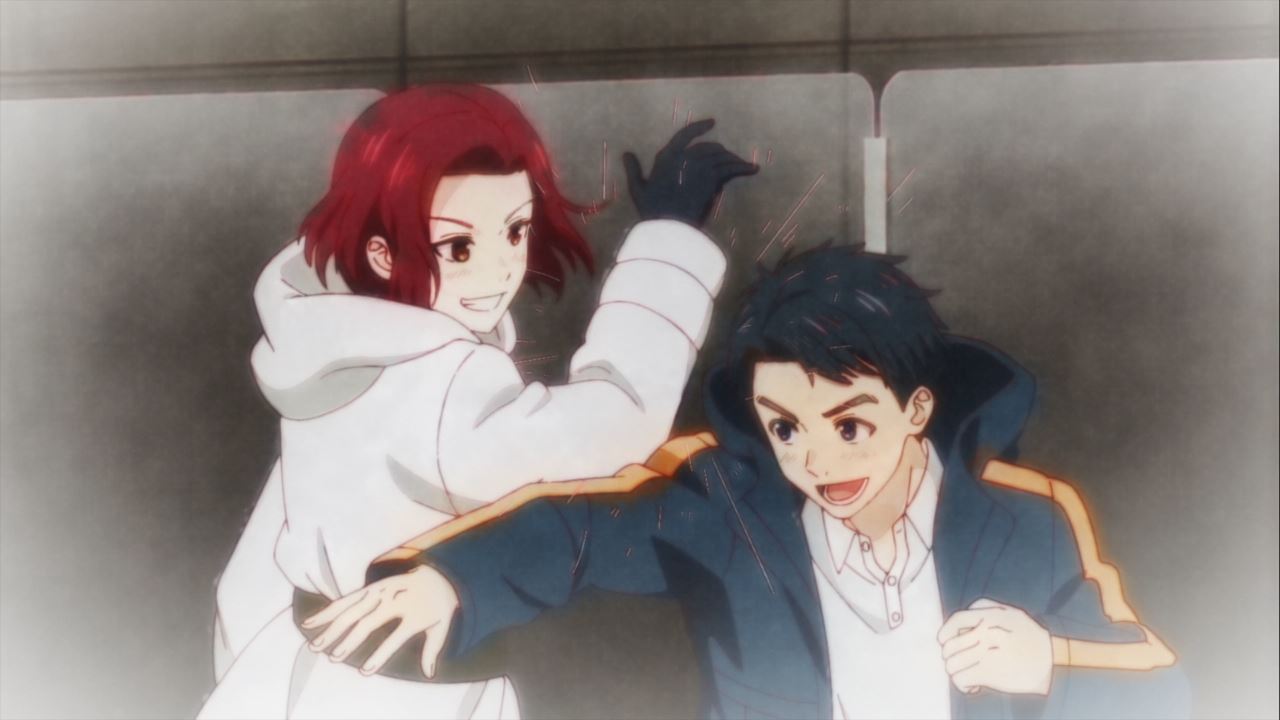 Heck, even Yoko Matsunaga and Sou Satou are happy that the Nikko Dream Monkeys won over the strongest team in B Division. 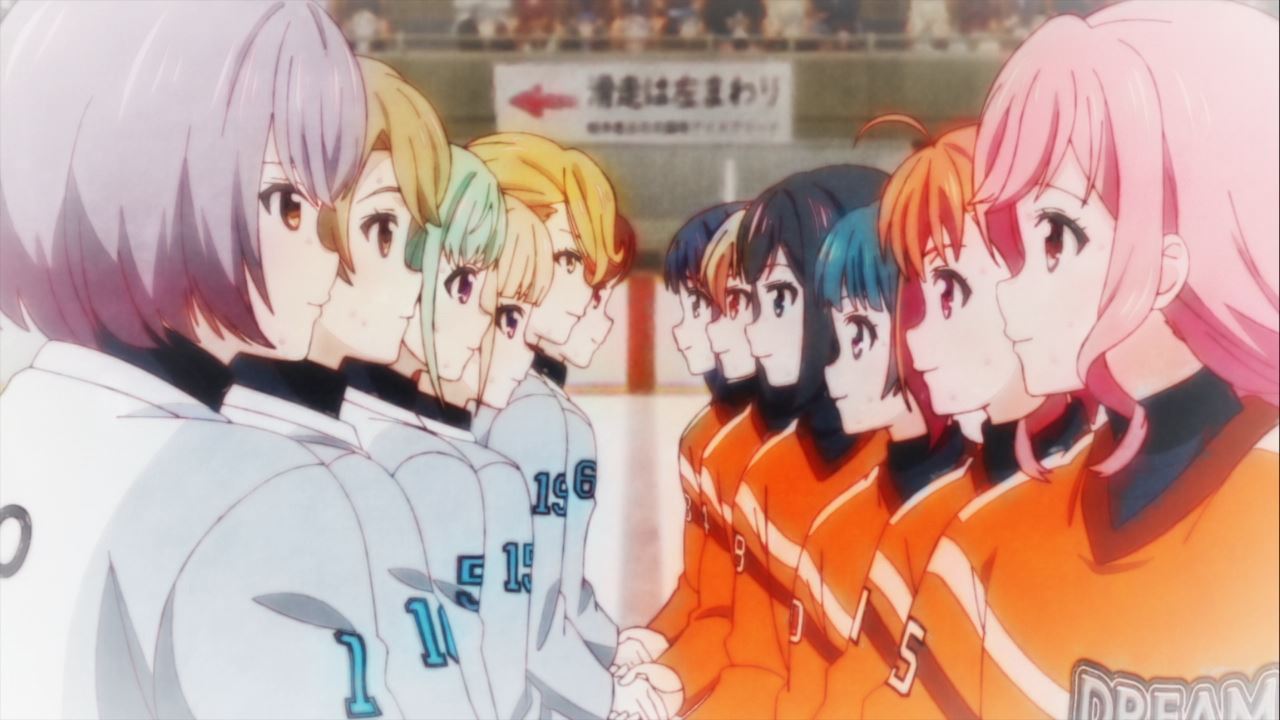 Of course, Kushiro Snow White will try to come back to the top division for next season, as they learned their lesson pretty hard on this game against the Nikko Dream Monkeys.

I’m looking forward to them in the future as they’re gonna focus on their teamwork, rather than letting their ace player carry the entire team. Then again, will Kushiro Snow White have Maya Walker in the lineup? We’ll never know… 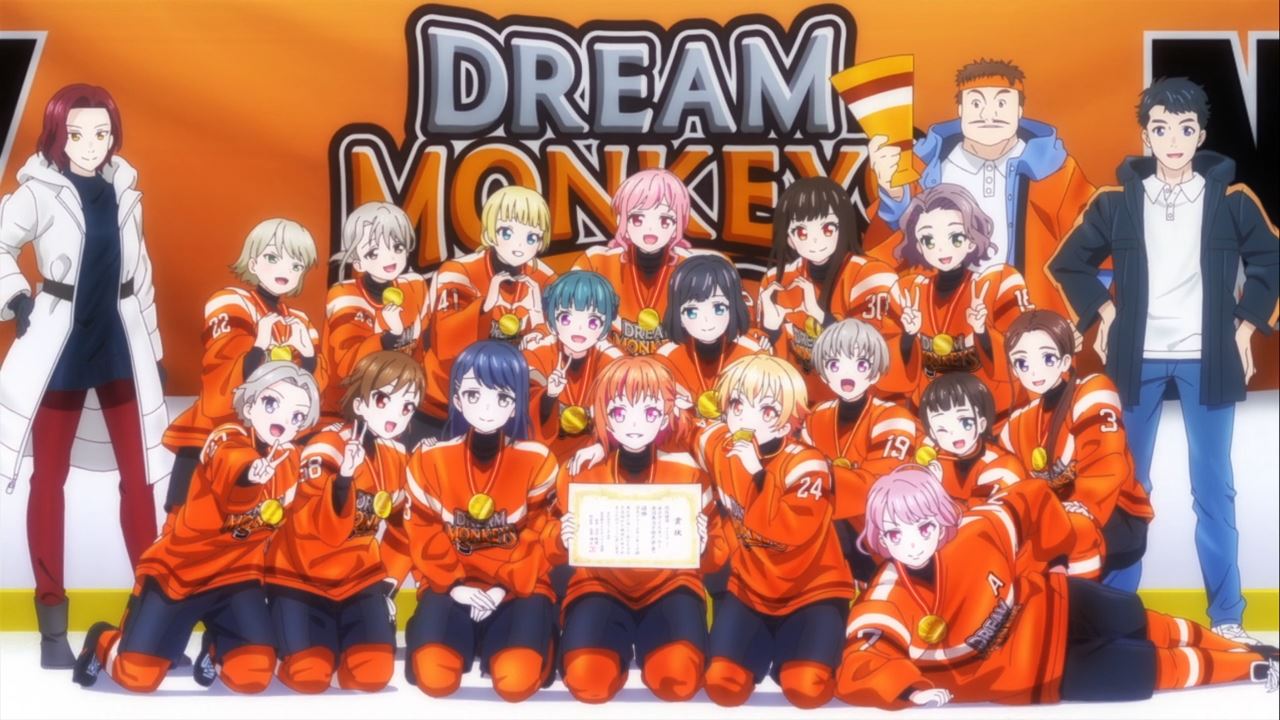 And that’s the end of PuraOre and I really enjoyed how cute girls play ice hockey. Everything else is decent and I really enjoyed on how Manaka and the rest grow as they play the sport, but let’s not forget that this is created as part of a larger franchise where it’ll have concerts and a mobile game in the future which is why there’s the idol anime aspect to it. C’mon, Yoko Matsunaga wanted to attract ice hockey in Japan by letting the players perform the victory dance after they won their game.

In any case, PuraOre is not great for average viewers who wanted a serious sports anime, but I really enjoyed on how the makers of PuraOre are trying something different. Seeing cute girls playing ice hockey rather than doing embroidery is really nice. Oh, and not to mention that the ending is somewhat dramatic when Manaka scored the winning goal because she’s connected with her teammates. 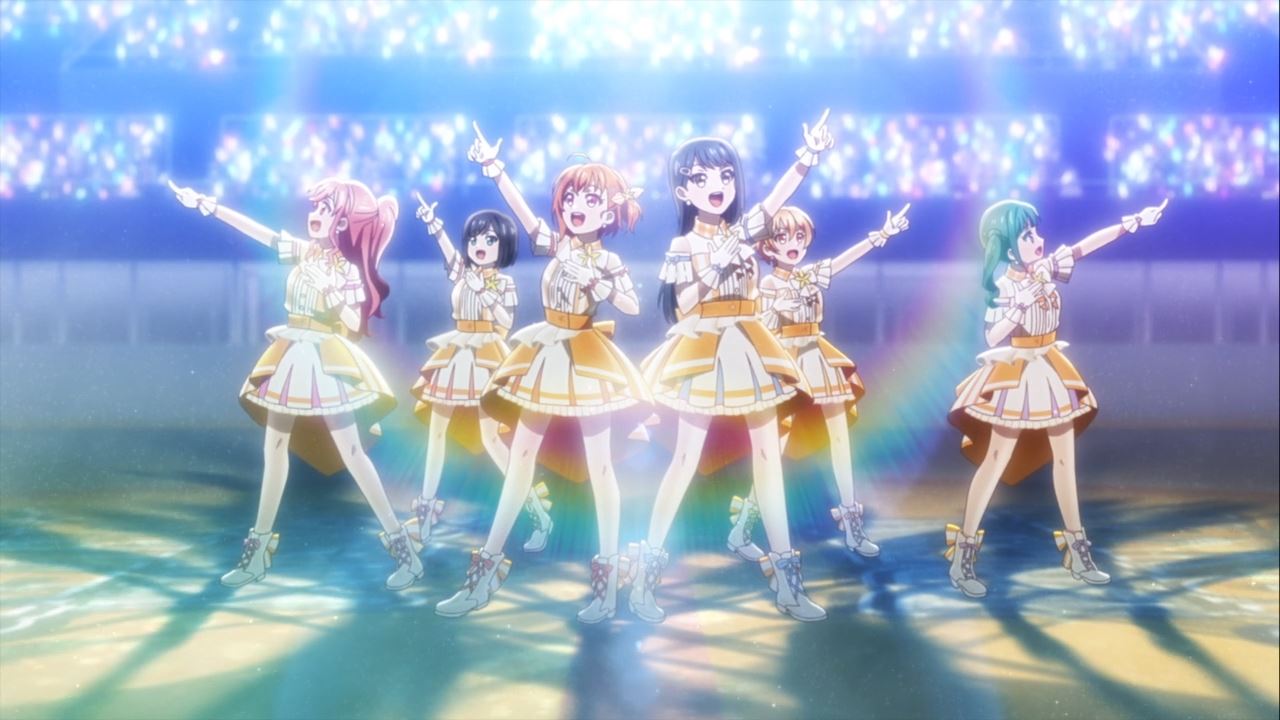 Now then, let’s end this show with the aforementioned victory dance by the Nikko Dream Monkeys! They really looked cute when since and dance in front of a large crowd who expects a speech from the MVP. BTW, is Manaka Mizusawa the MVP of this game?

Ah you know what, I wish them good luck on making PuraOre into a successful mix-media franchise similar to Uma Musume or BanG Dream! Heck, I’ll be surprised if there’s another season of this show, although I don’t expect it too much.