Posted on January 3, 2022 by benigmatica 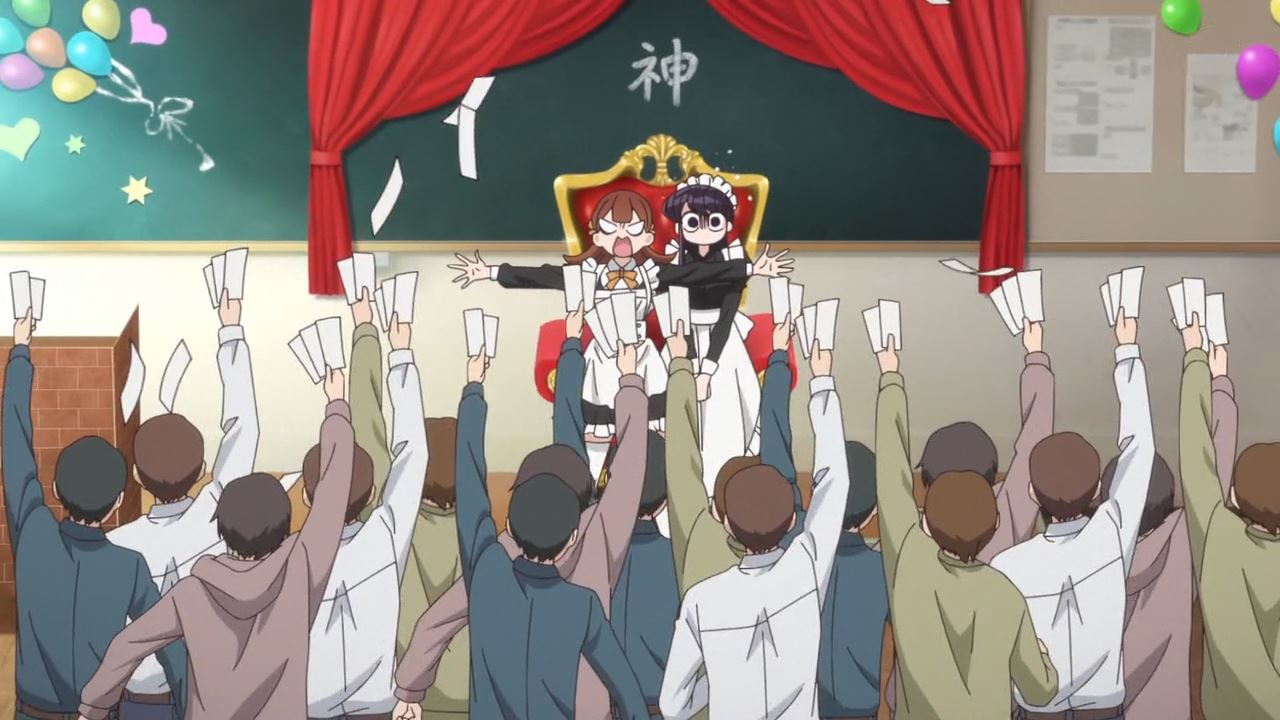 This is the final episode everyone as the maid café is booming with customers thanks to Shouko Komi’s presence.

Heck, even Najimi Osana is swimming with cash as Komi-san is bringing in lots of guests from within and outside Itan Private High School. 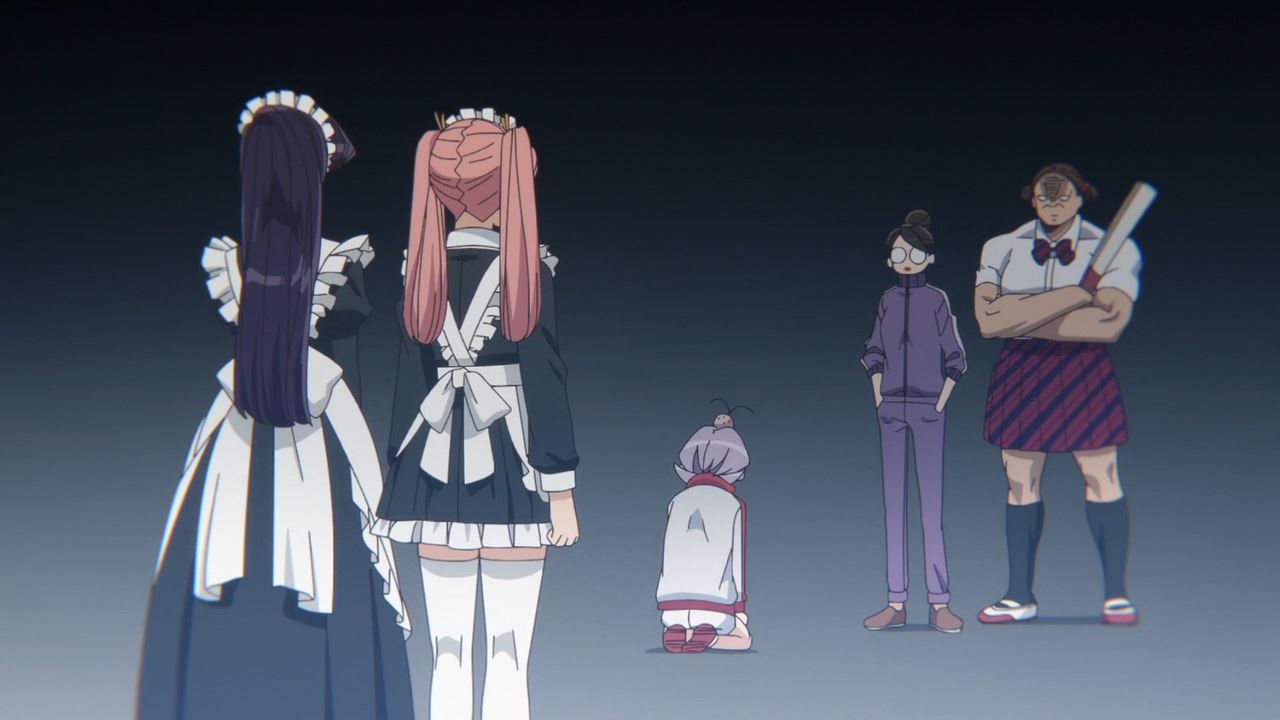 Unfortunately, Najimi’s practice was noticed by Gorimi-sempai and the homeroom teacher that their maid café was disqualified in the awards for best stall. Thank for ruining it, Najimi Osana! 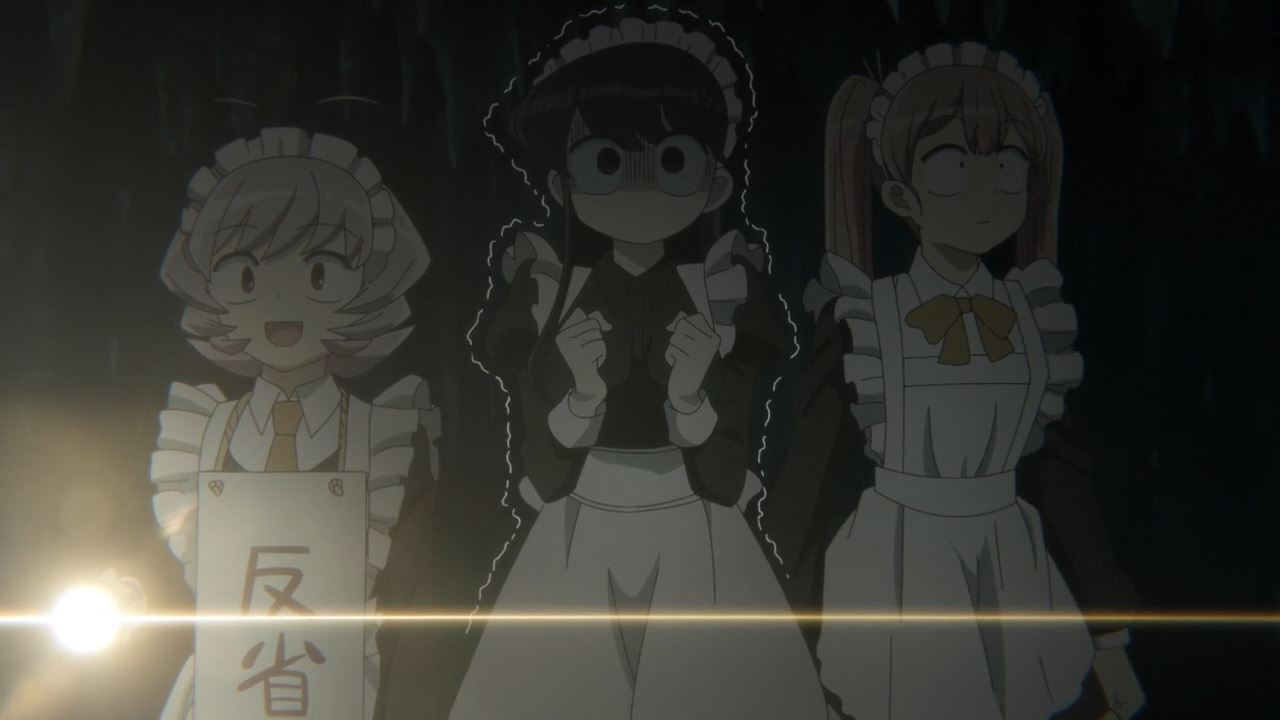 Now then, it’s time for Komi-san and her friends to visit the haunted house where she’s already scared. Well, looks like Komi-san doesn’t communicate, but she’s easily frightened despite not having real ghosts. 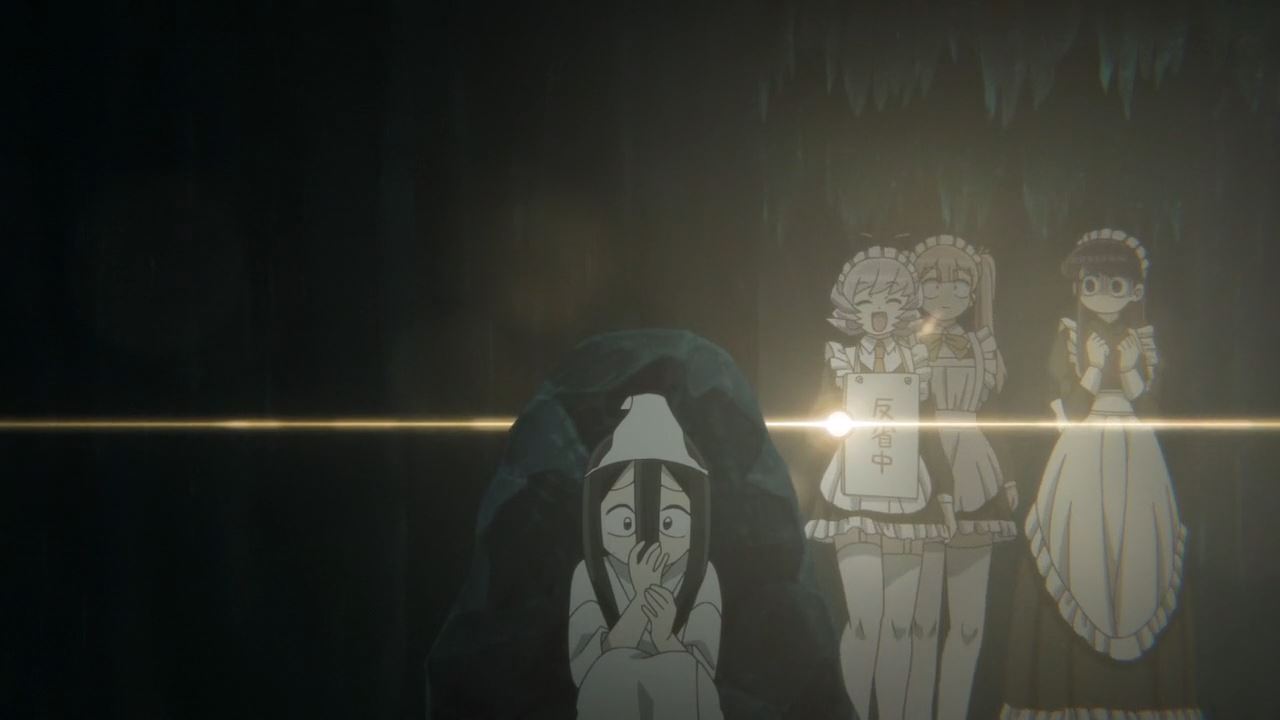 Oh yeah, here’s Nokoko Inaka where she tries to scare Komi-san, only for Inaka-san to miss her only opportunity as her idol already left the room.

Still, it’s better this way as Shouko Komi can’t handle scary things that she might pass out. 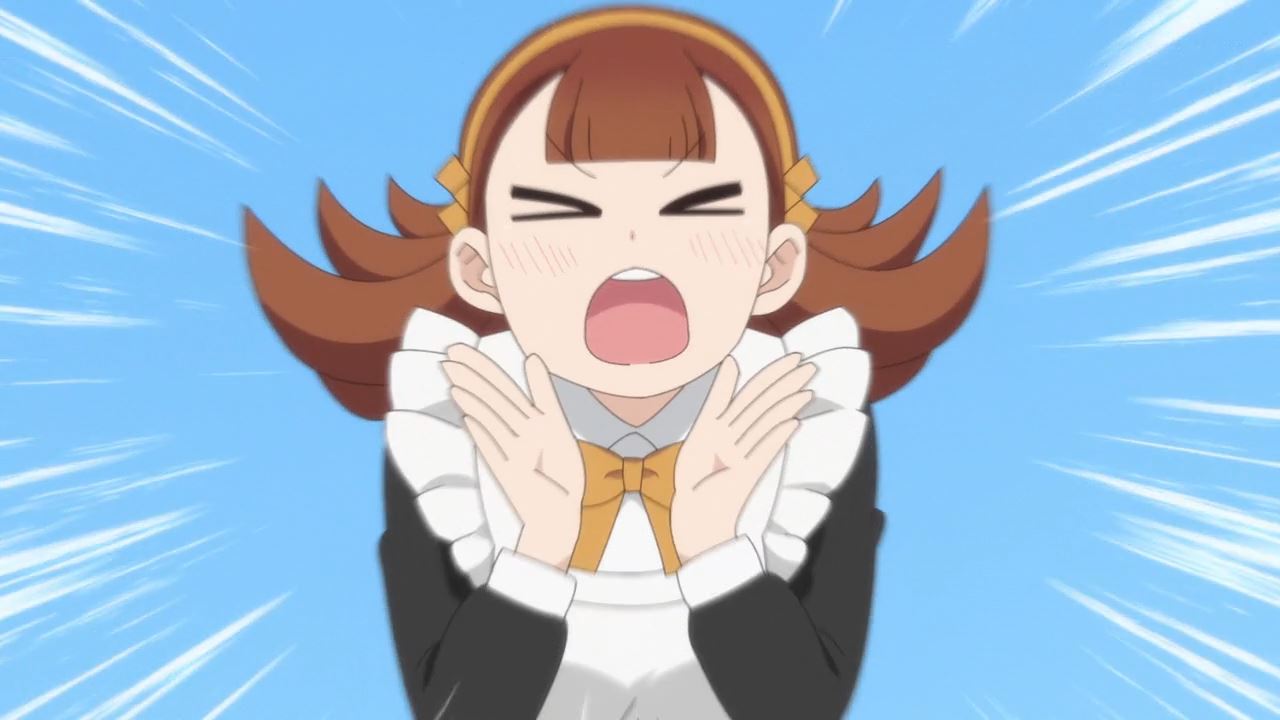 Meanwhile, here’s Ren Yamai where she decides to confess her true feelings to Komi-san.

Um Yamai, you’re gonna have lots of enemies if you do that. Then again, she might kill everyone off with her trusty knife. 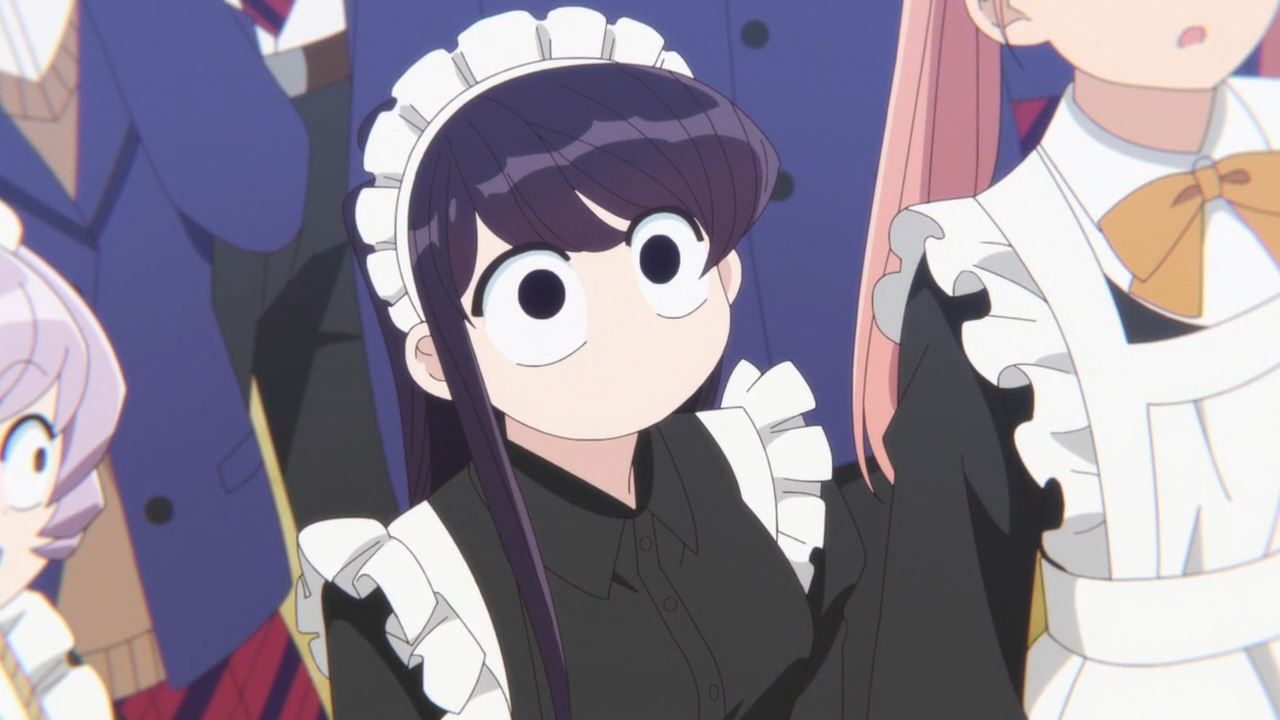 But as for Shouko Komi? The only reaction to Yamai’s confession is dead silence. I mean, Komi-san can’t properly react to her love confession ’cause it’s either cringy or stupid. 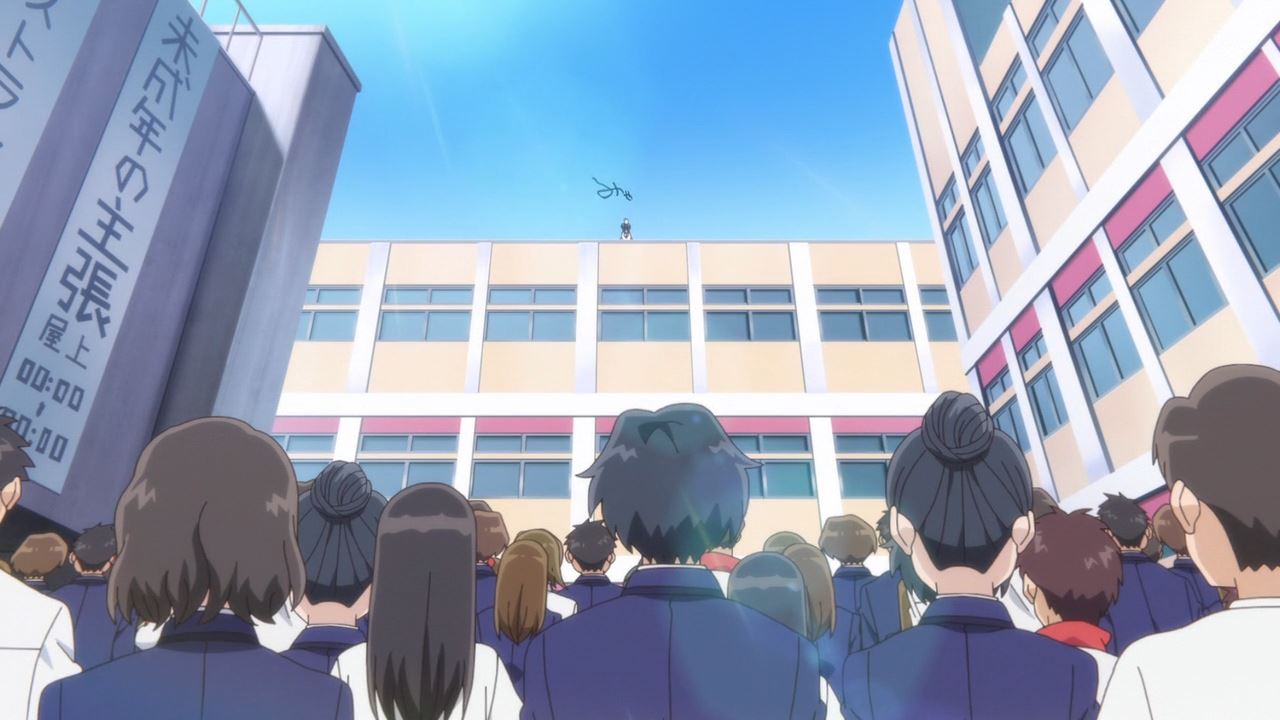 But speaking of Komi-san, looks like she was asked by Najimi Osana to say something in front of the crowd, although Komi’s nervousness is already kicking into high gear that she can only say “Mya!” in a soft voice. 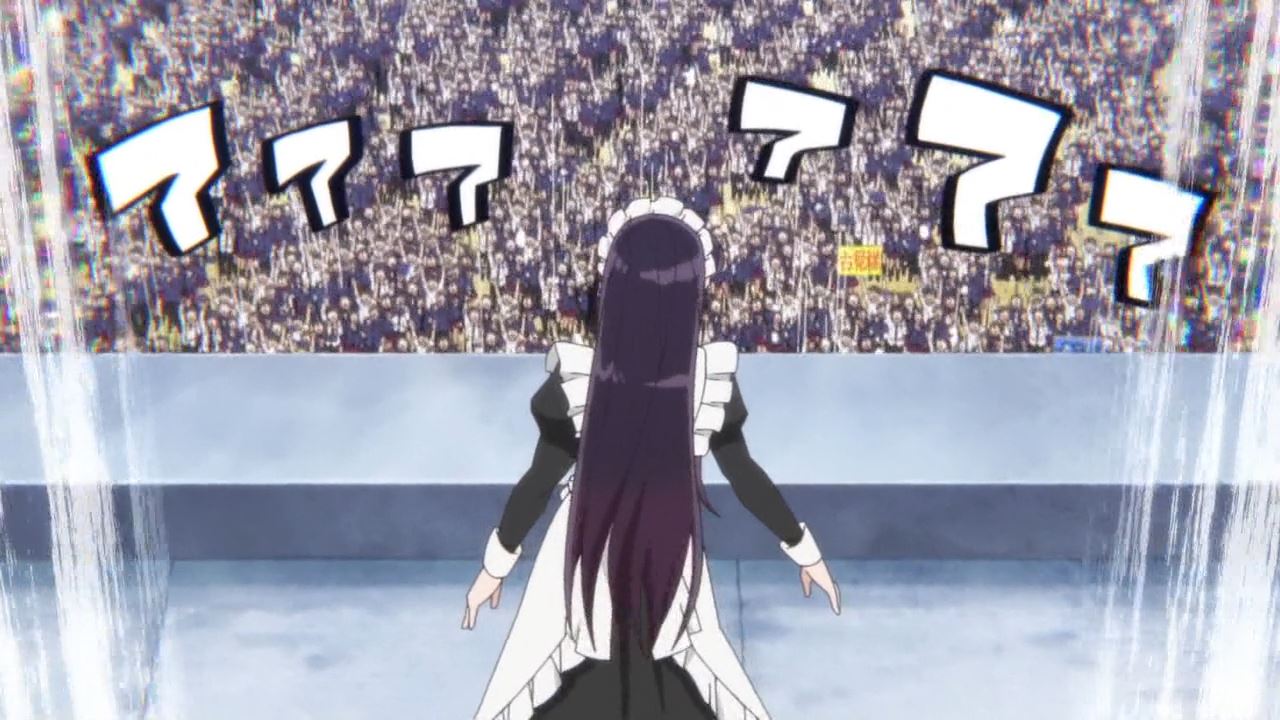 However, that doesn’t stop everyone from cheering Komi-san up as they found it so cute when she speaks softly.

Unfortunately for Shouko Komi, she already passed-out as Komi-san is overwhelmed by the large crowd of students. Poor Komi-san… 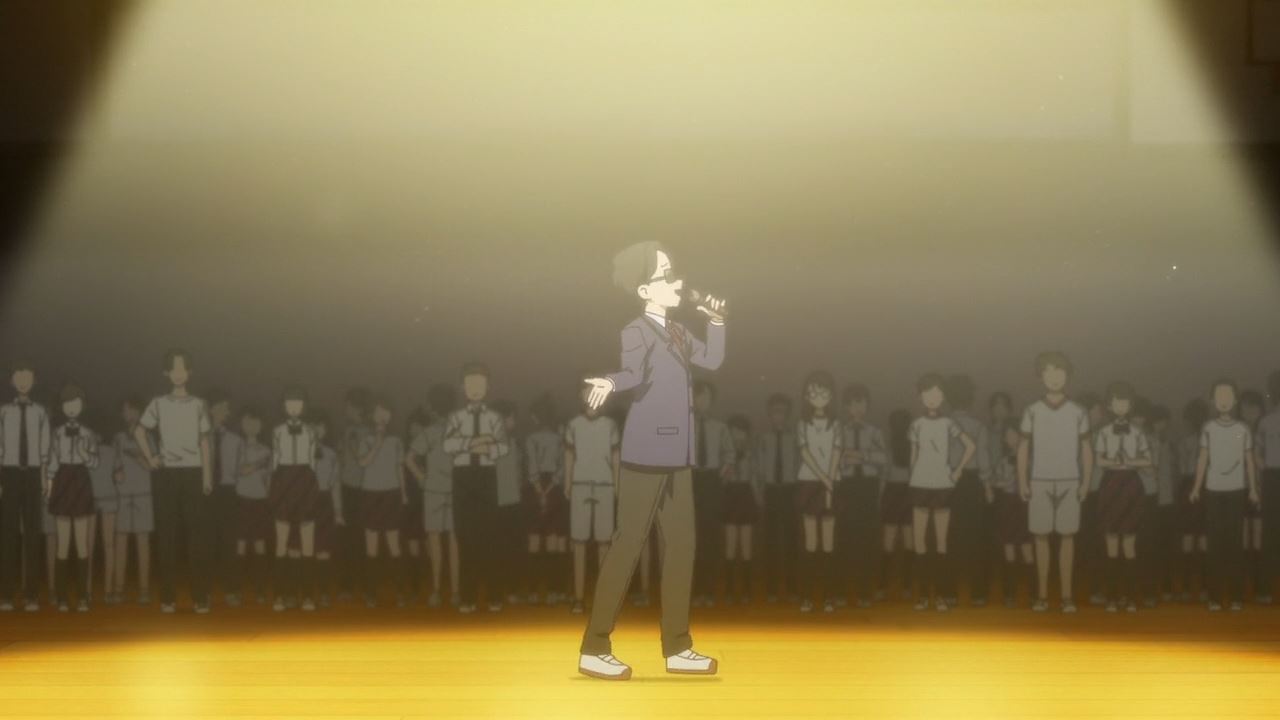 Now then, it’s time to close out the school festival with a dance party. Of course, most of the students wanted to dance with Shouko Komi since she’s the goddess in Itan Private High School. 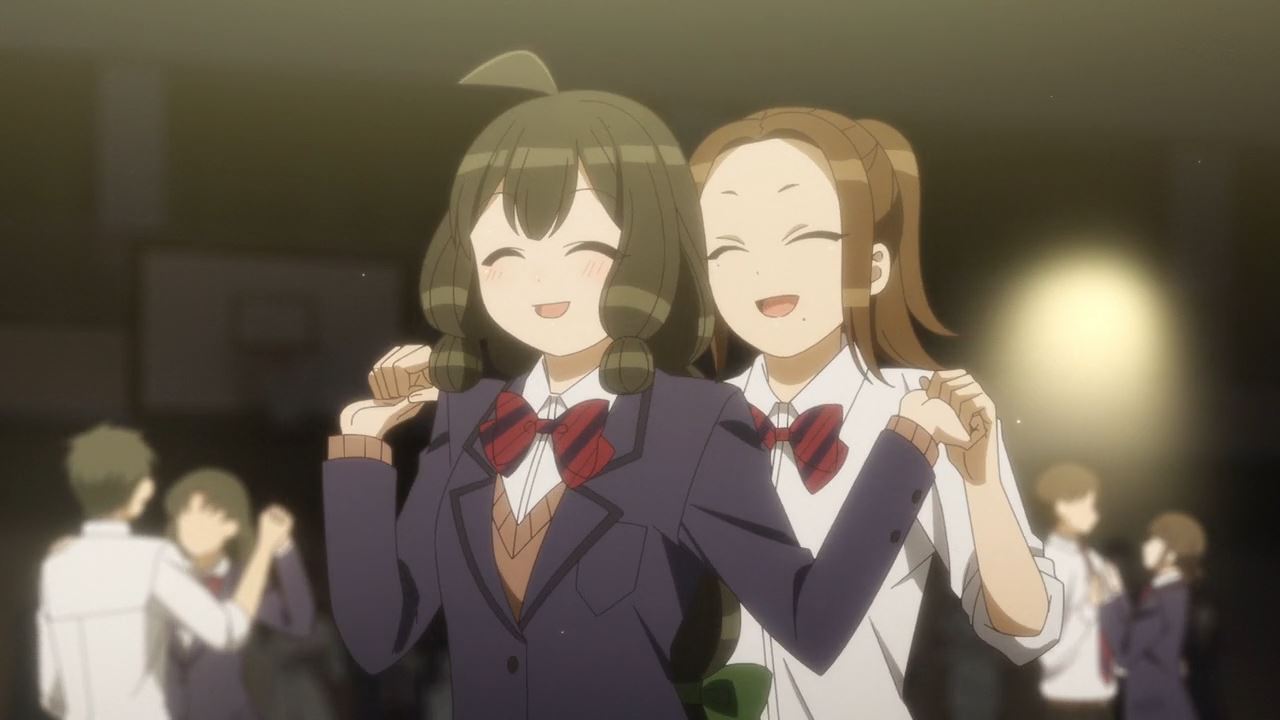 But others like Nene Onemine and Kaede Otori are doing fine by themselves as they rather dance with each other than inviting Komi-san to the ball. 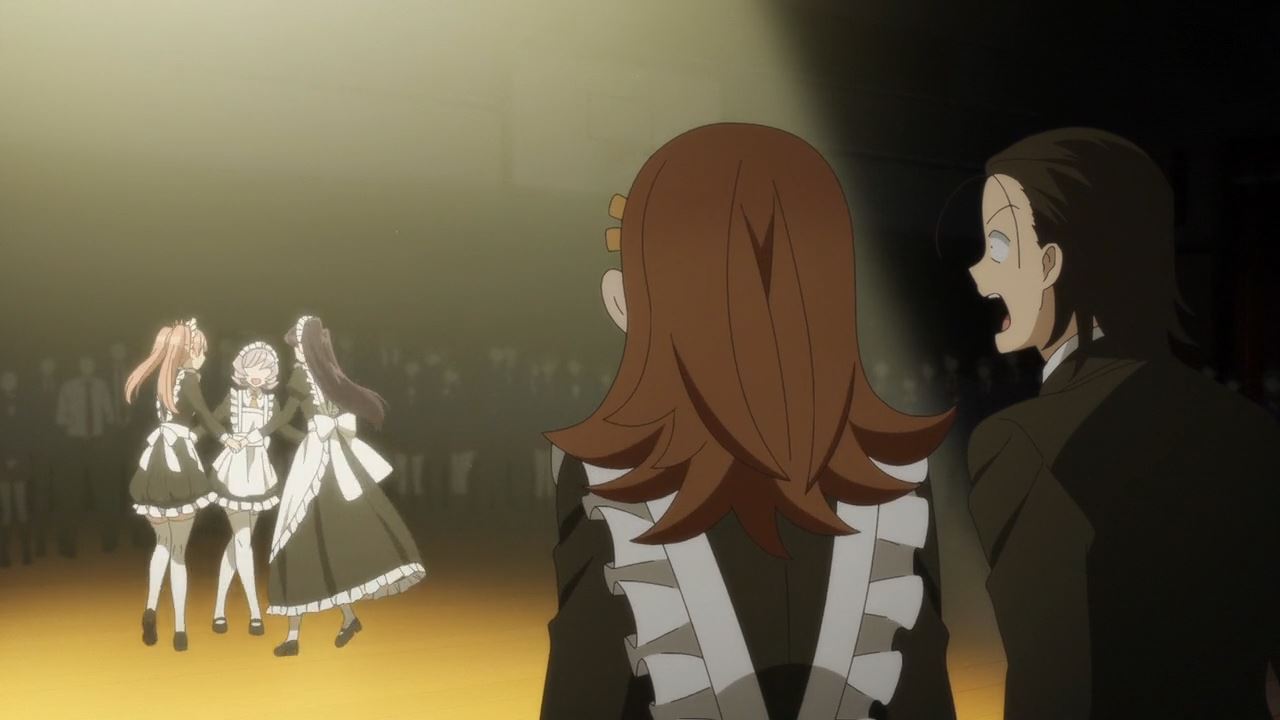 Of course, some students like Ren Yamai and the rest of the Komi Imperial Guards are really jealous that they didn’t get to dance with their goddess. Well, it’s their fault for not being sincere to Komi’s communication woes.

Anyways, it was a fun school festival, although I wish Najimi won’t do another underhand tactic to win the best stall for next year’s festival. 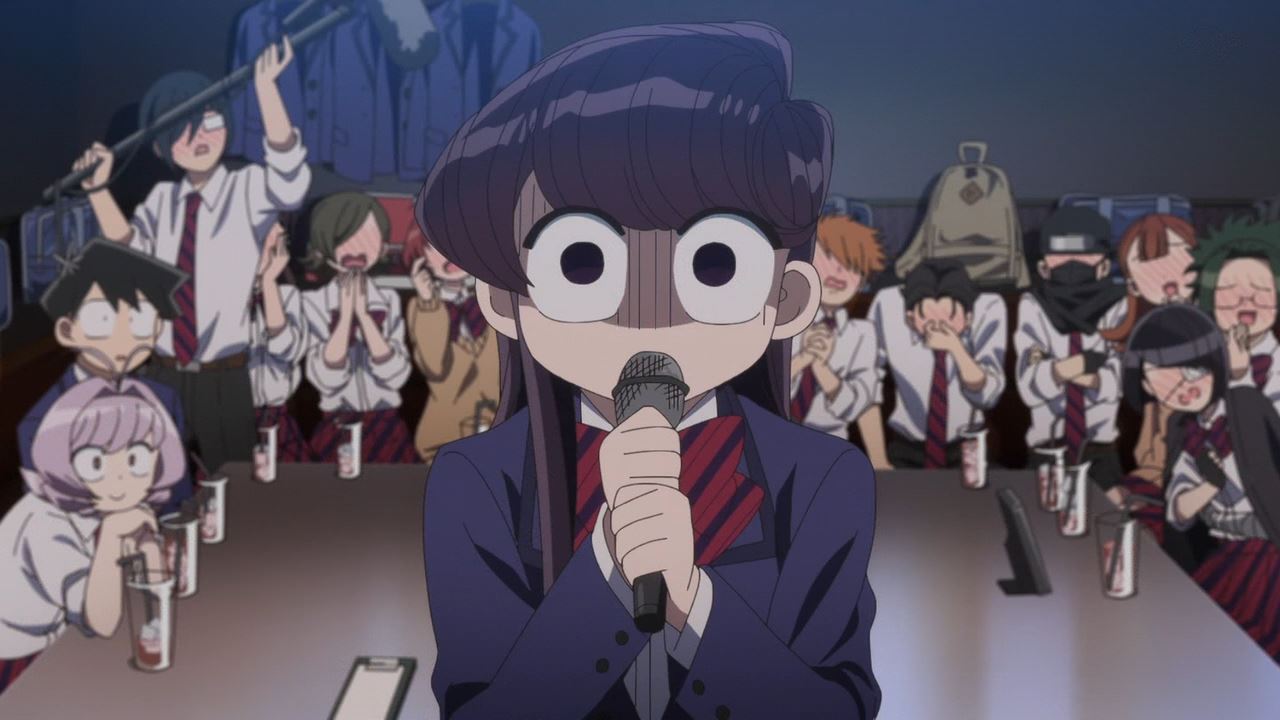 And now, it’s time for the afterparty where they went to a karaoke bar. Unfortunately for Komi-san, she can’t sing confidently compared to her outgoing mother. But that’s the end of this show! 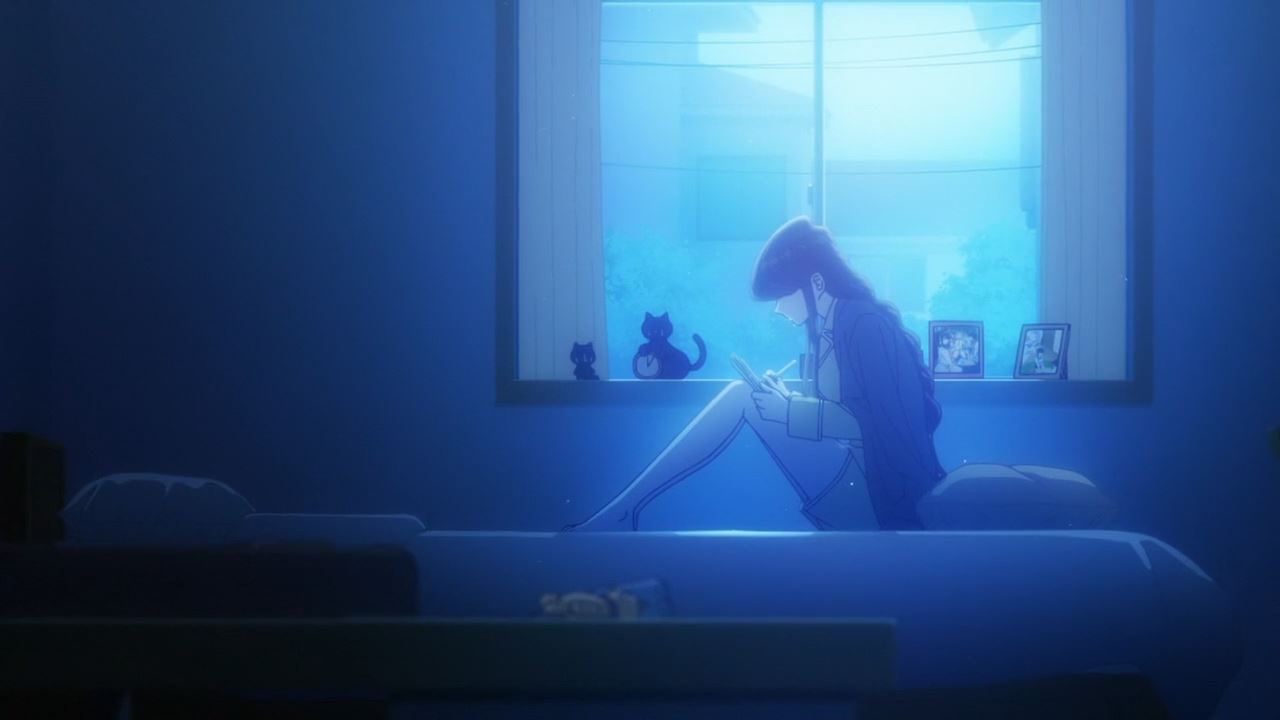 Well then, I have to say that it was an enjoyable show where it’ll make you laugh with all those hilarious moments involving Komi-san, or even felt sympathy towards Shouko Komi’s communication problems.

Fortunately, Hitohito Tadano managed to help her out as he really understands her plight compared to other students within Itan Private High School, and I really appreciate his help that Komi-san made friends with Najimi Osana, Omoharu Nakanaka, and various people. Of course, I still hate Ren Yamai and the rest of the imperial guard where they only admire Komi’s presence rather than helping her communication problems.

In any case, I really enjoyed watching this anime series that most of them viewers loved how Komi-san is not only cute, but somewhat relatable when it comes to communication woes. 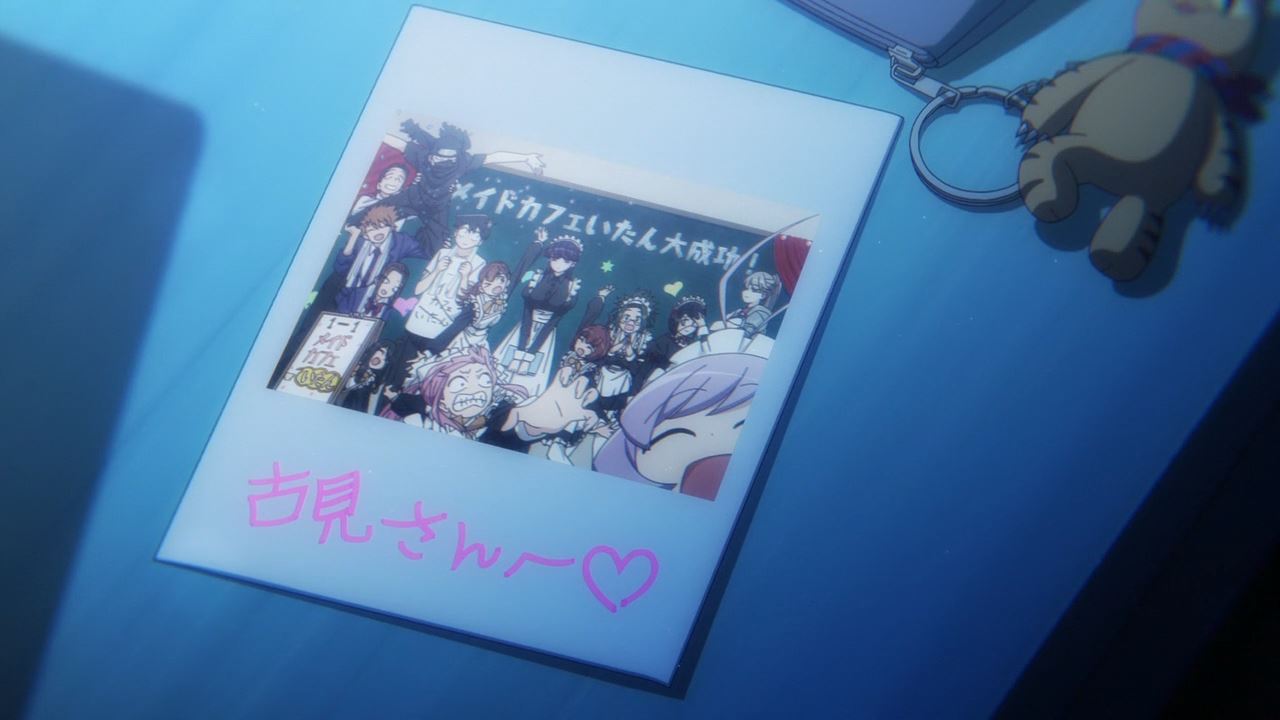 One more thing, it appears that Komi-san wa, Komyushou desu. is popular that a Season 2 already got the green-light, meaning that we’ll see more of Komi-san as she tries to communicate with her classmates with some help from Tadano-kun. Good luck to her in the future!