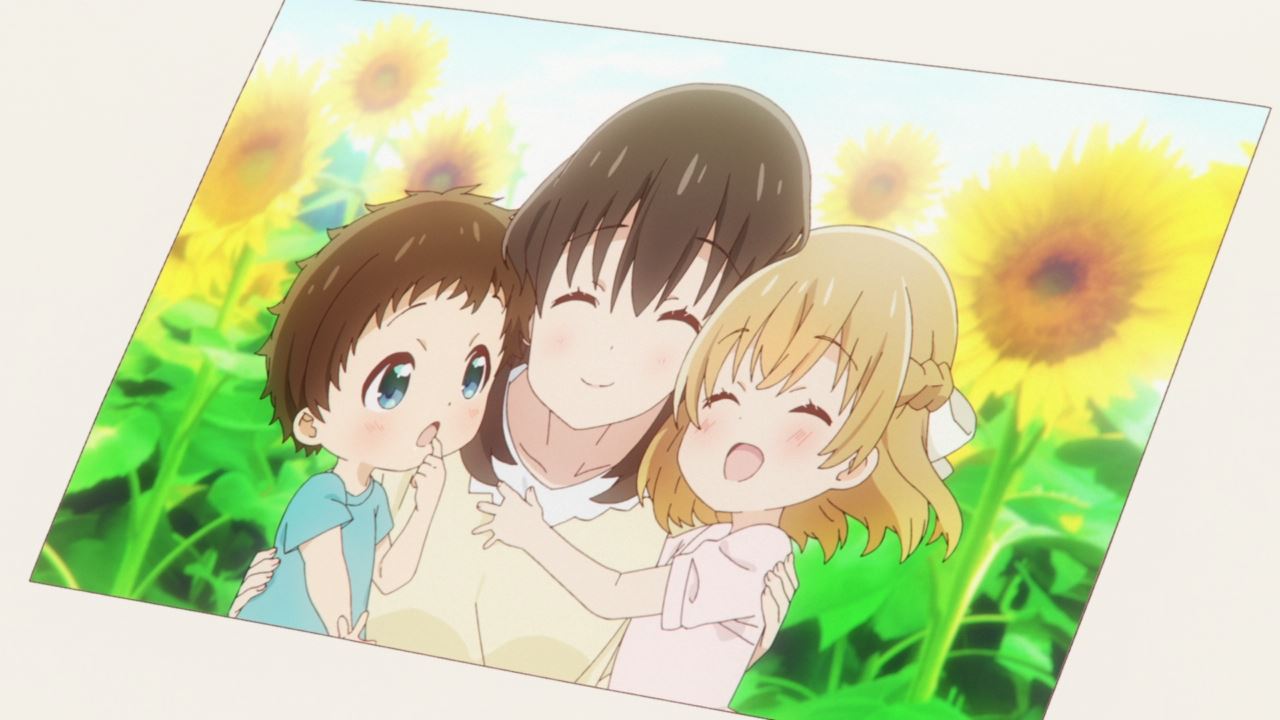 Let’s start this episode with a picture of Koharu’s late brother Natsuki and her mother where they died in a car accident years ago. It’s really sad that Koharu lost her brother and mother for such a young age. 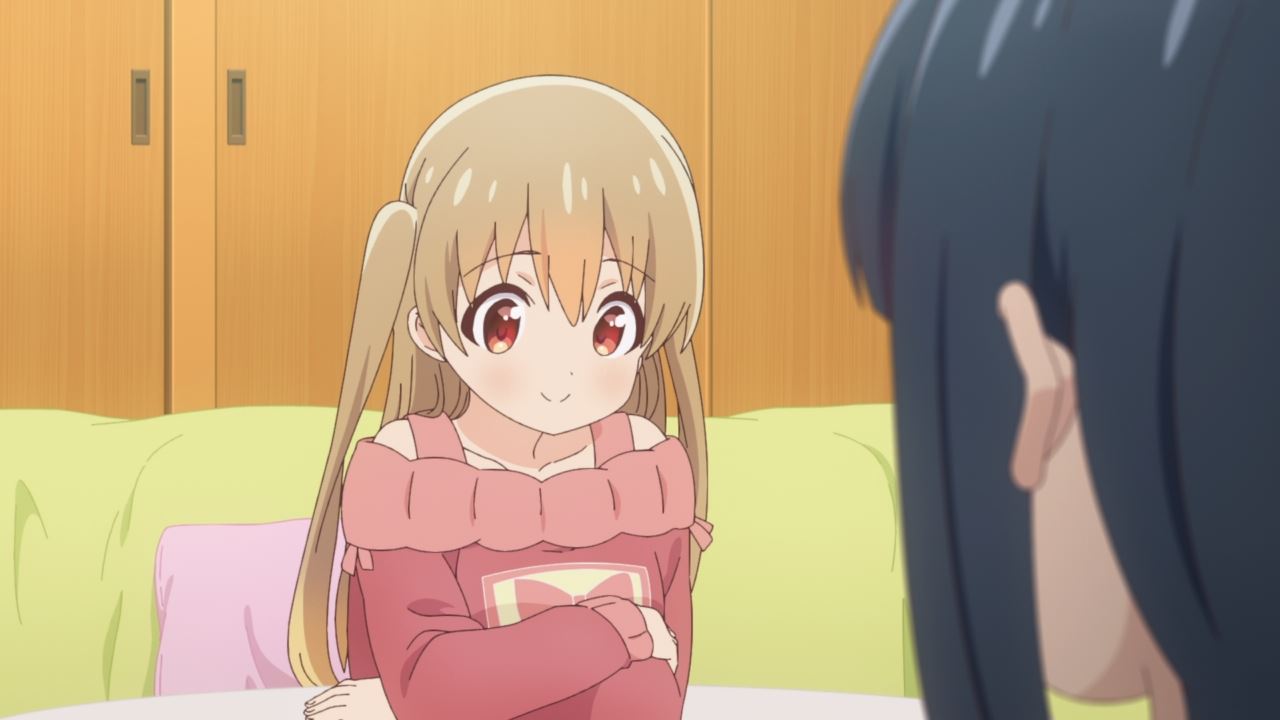 Yet despite the tragedy, Koharu is living cheerfully now that she has a step-mother and a step-sister.

Honestly, while Koharu already got the hang of it now that she has Hiyori on her side, I think she should keep those memories when her mother and brother are still alive. 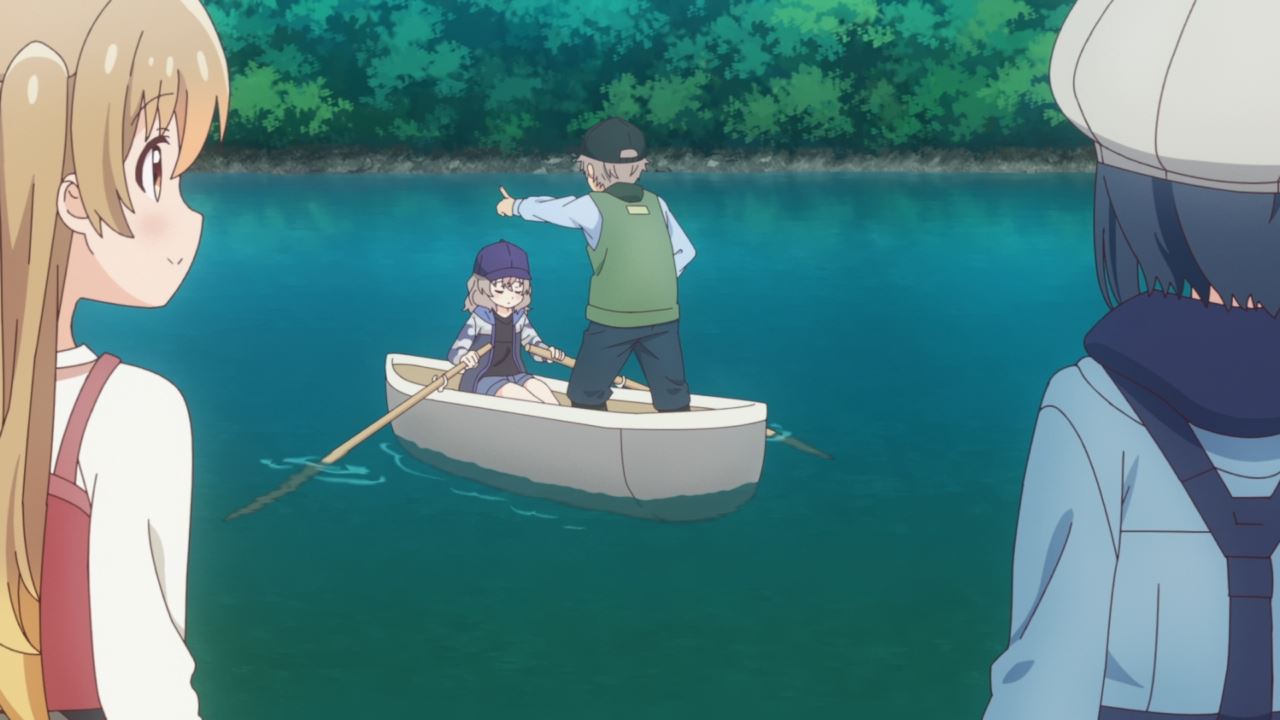 Now then, it’s time for fishing/camping trip where Koharu and Hiyori Minagi are joined by Koi and Ryouta Yoshinaga.

And by the way, Koi made a rule where there won’t be any dinner for those who couldn’t catch a fish at the end of the day. Oh, and they’ll catch fish while riding a boat. 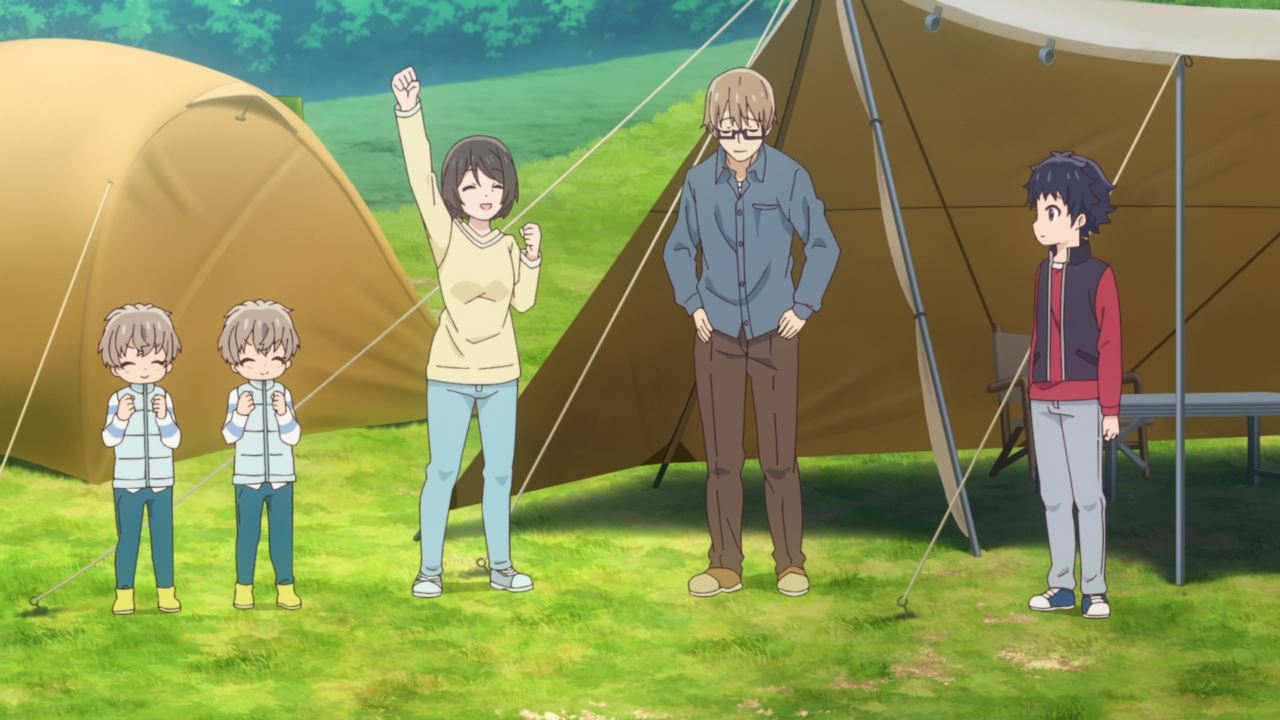 One more thing, I forgot to tell you that Koharu and Hiyori brought their parents where they’re setting-up camp together with Koi’s brothers.

Really surprised that Koi Yoshinaga has siblings like Hayato, as well as the twins Niji and Tora. But anyways, it’s time to catch some fish. 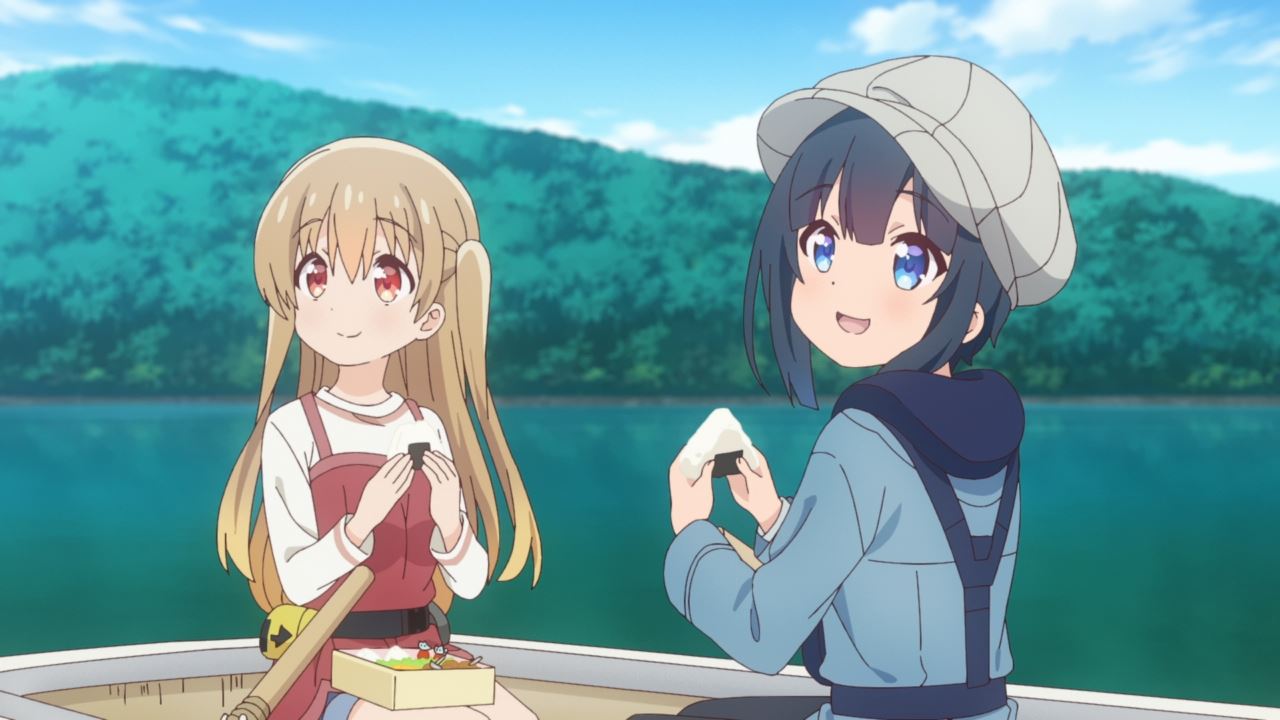 But first, time for a lunch break where Koharu and Hiyori eat onigiri before the main event. C’mon, they can’t catch fish on an empty stomach after all. 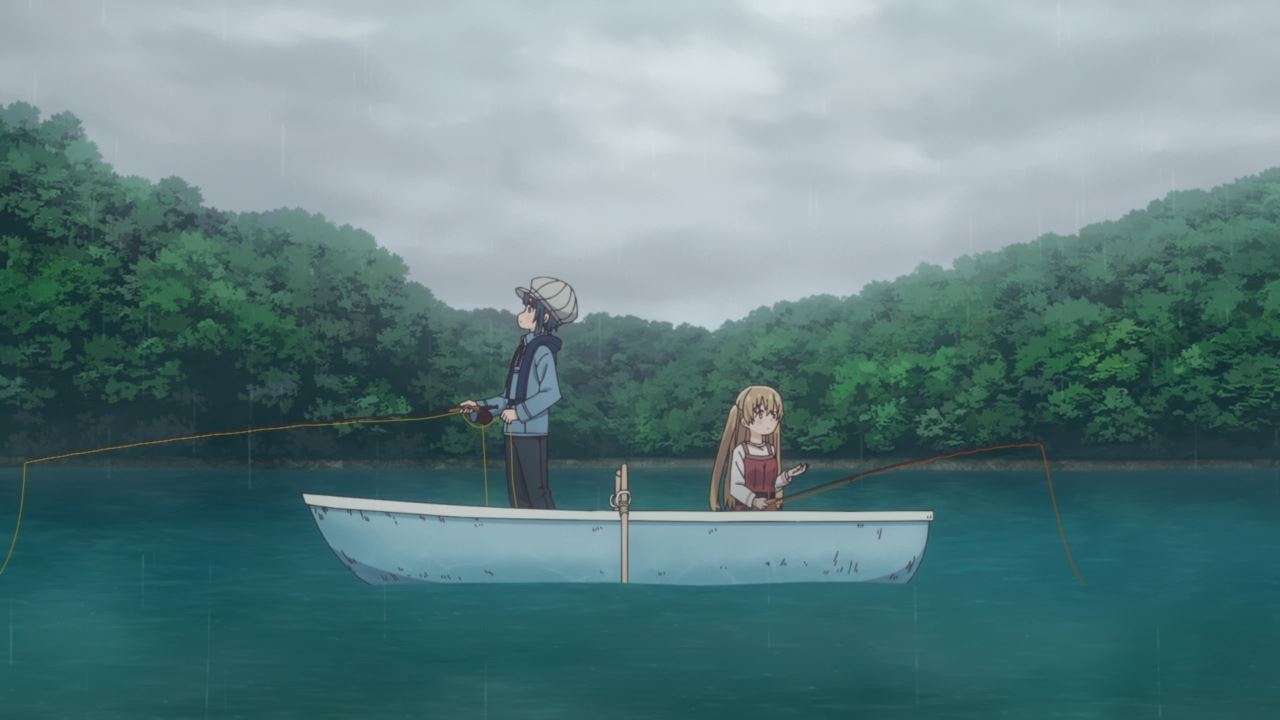 Unfortunately, their attempt to catch fish was interrupted by a sudden downpour. Well, it’s time for these girls to hide under the shade ’cause the weather is pretty unpredictable today. 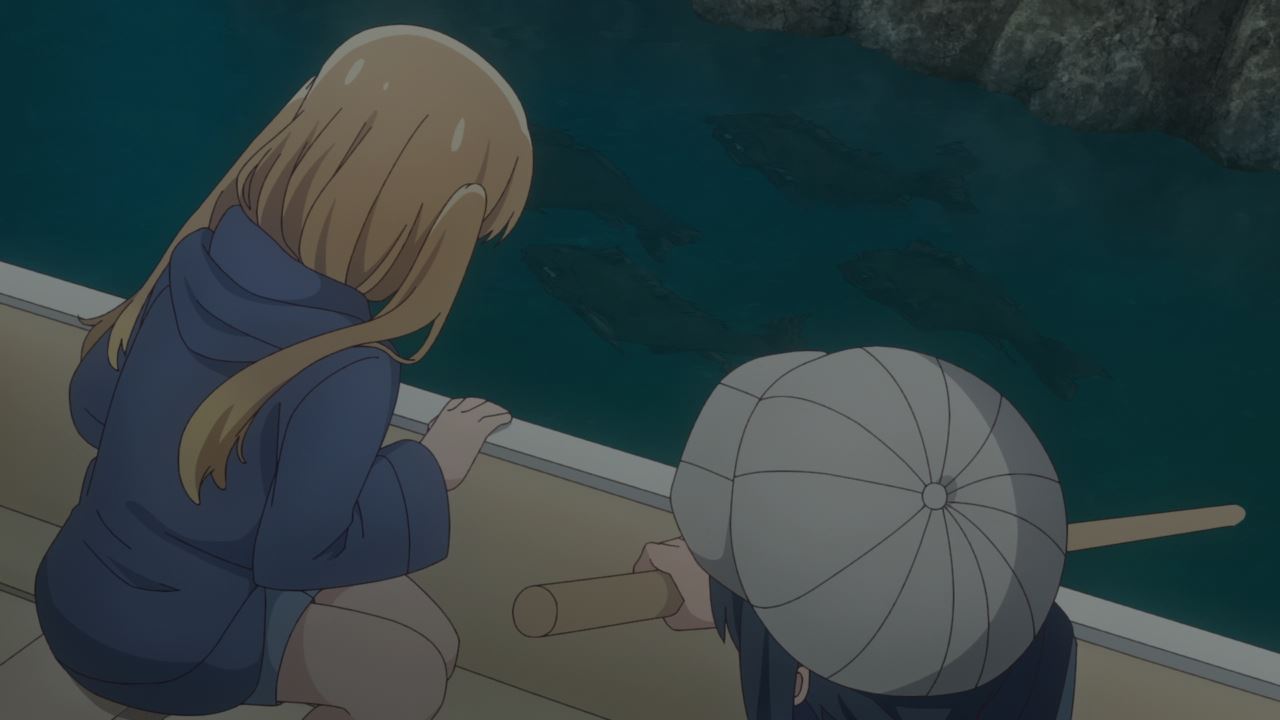 So while they’re waiting for the rain to stop, Koharu found a school of koi fish under the pond. Really lucky for her to see some fish up-close. 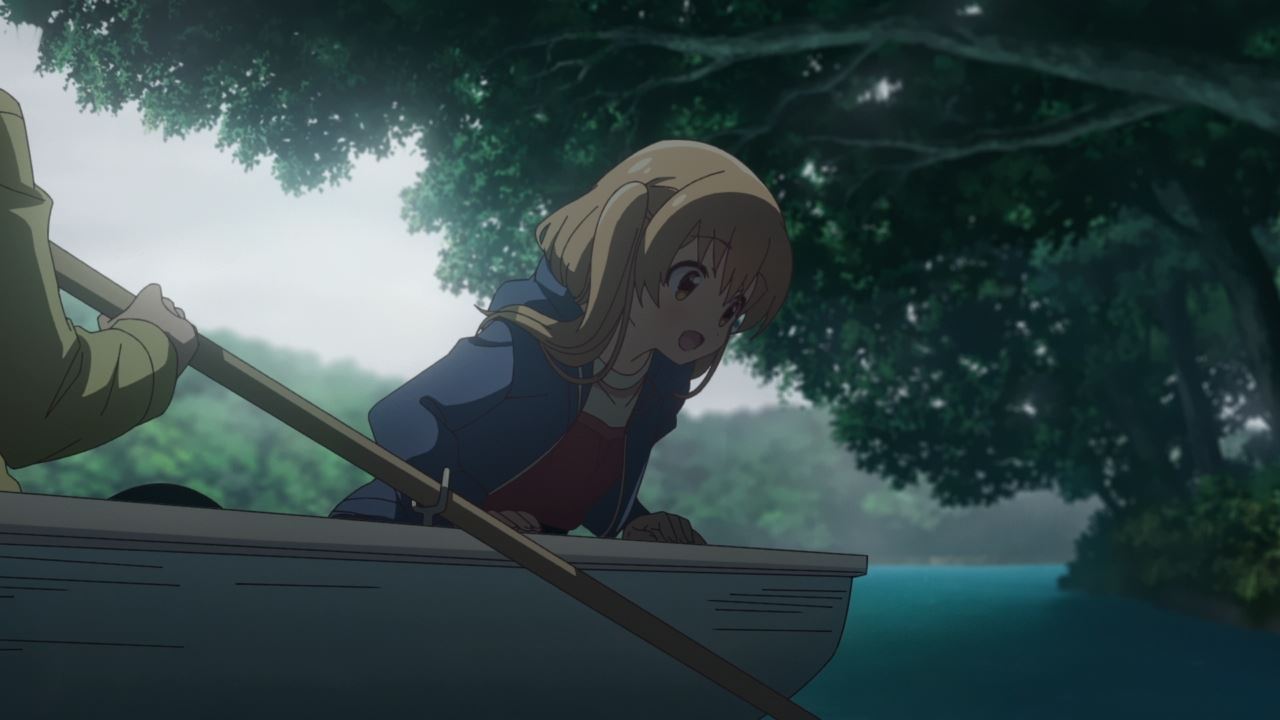 Sadly, Koharu can’t use her net to catch a single koi fish as she might disturb them. But don’t worry though as there’s still much time to catch one. 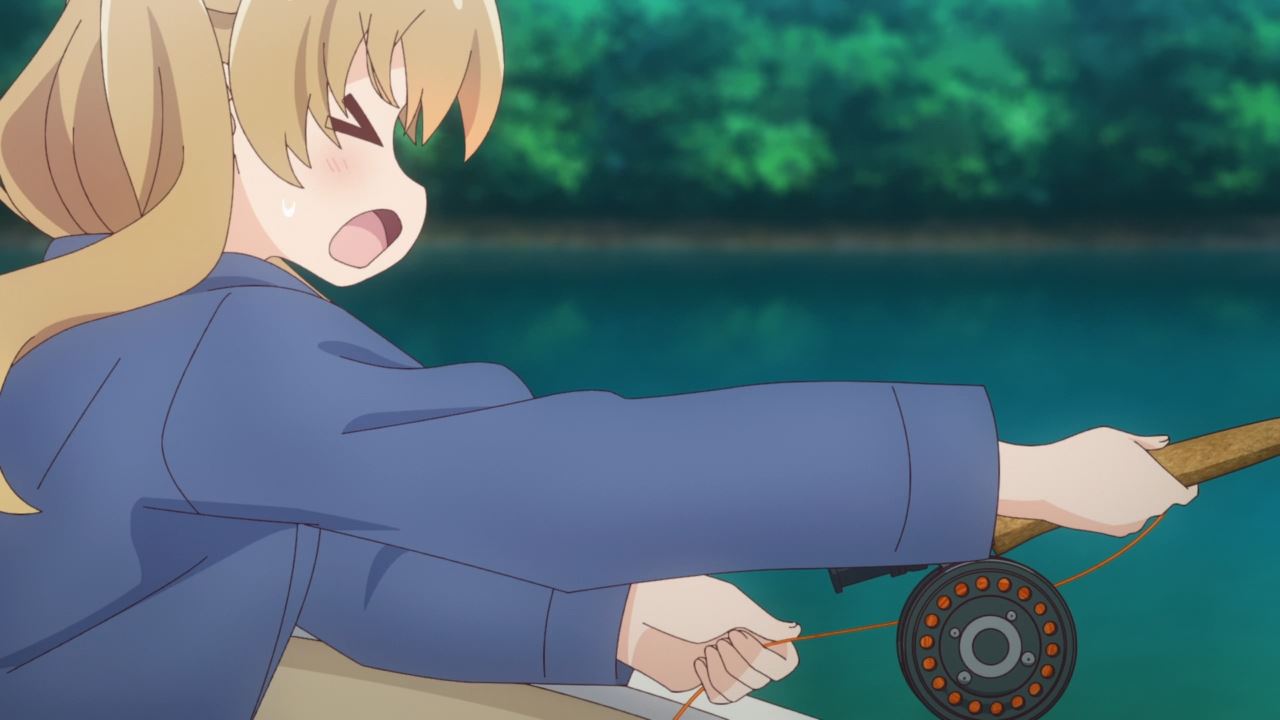 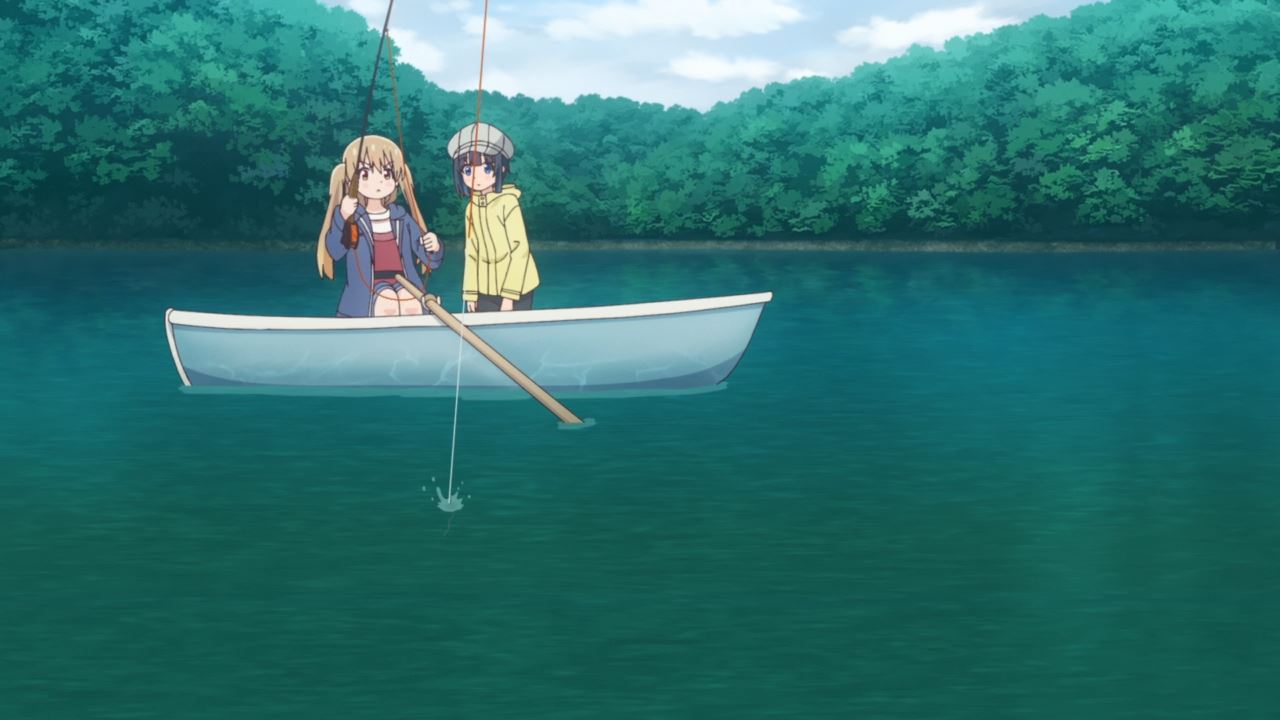 Anyways, looks like Koharu found the opportunity to catch one as she got some help from Hiyori. Let’s hope that Koharu will succeed. 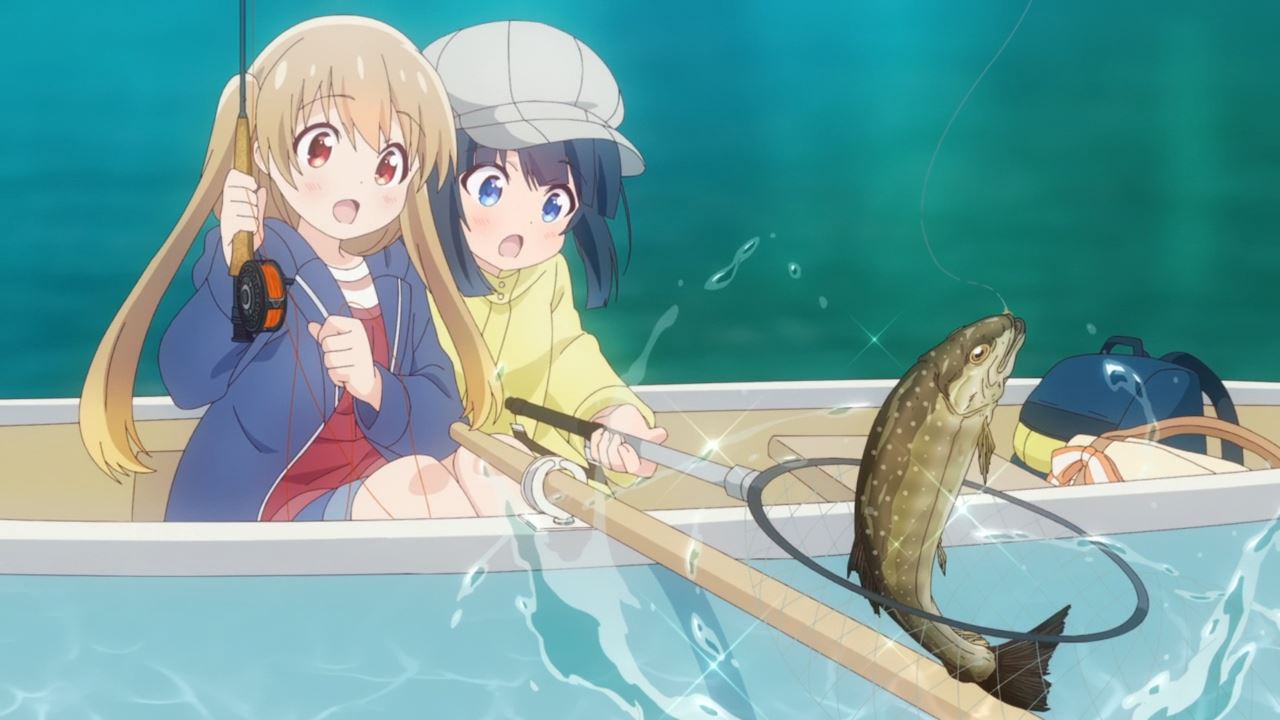 And luckily, Koharu managed to catch her first fish called a char. Glad that she did it ’cause Koi-chan might laugh at her if Koharu didn’t.

By the way, Hiyori caught two fish for today so she’s safe from Koi’s wrath. 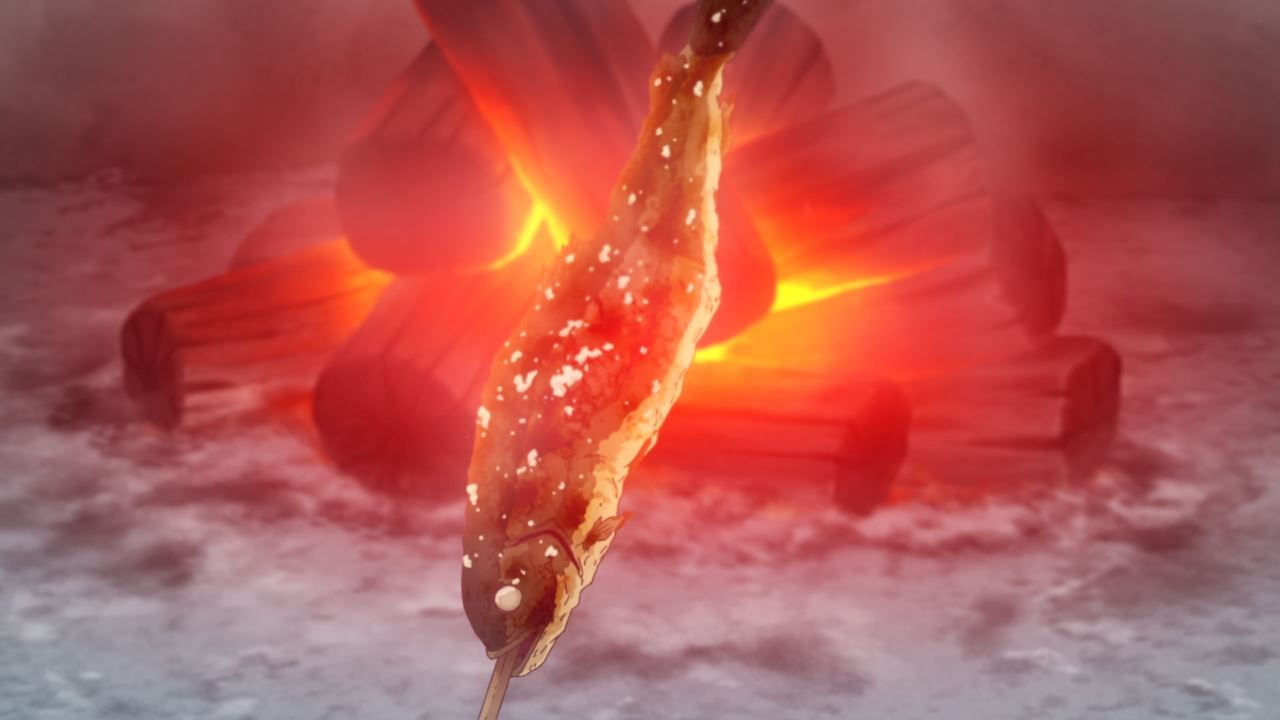 Now then, it’s time to grill the char where Koharu wants to know if it’s delicious or not. Then again, I bet that a grilled char would taste great since Koharu prepared it. 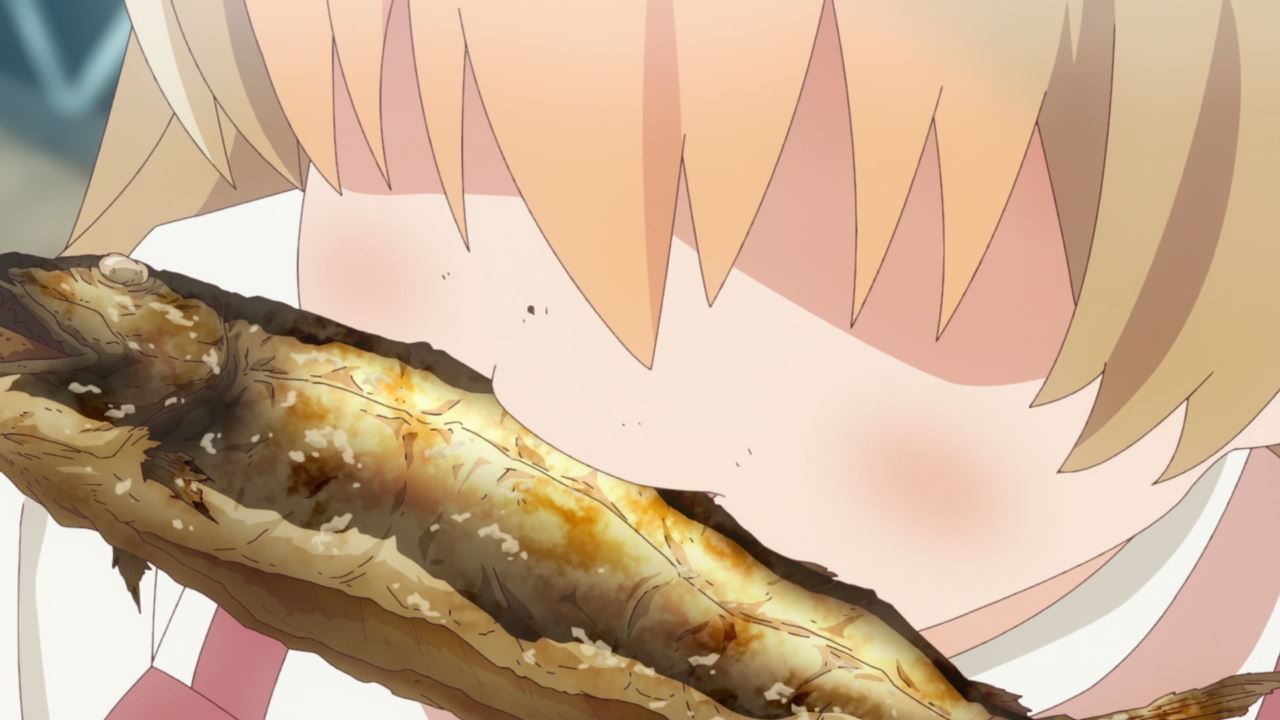 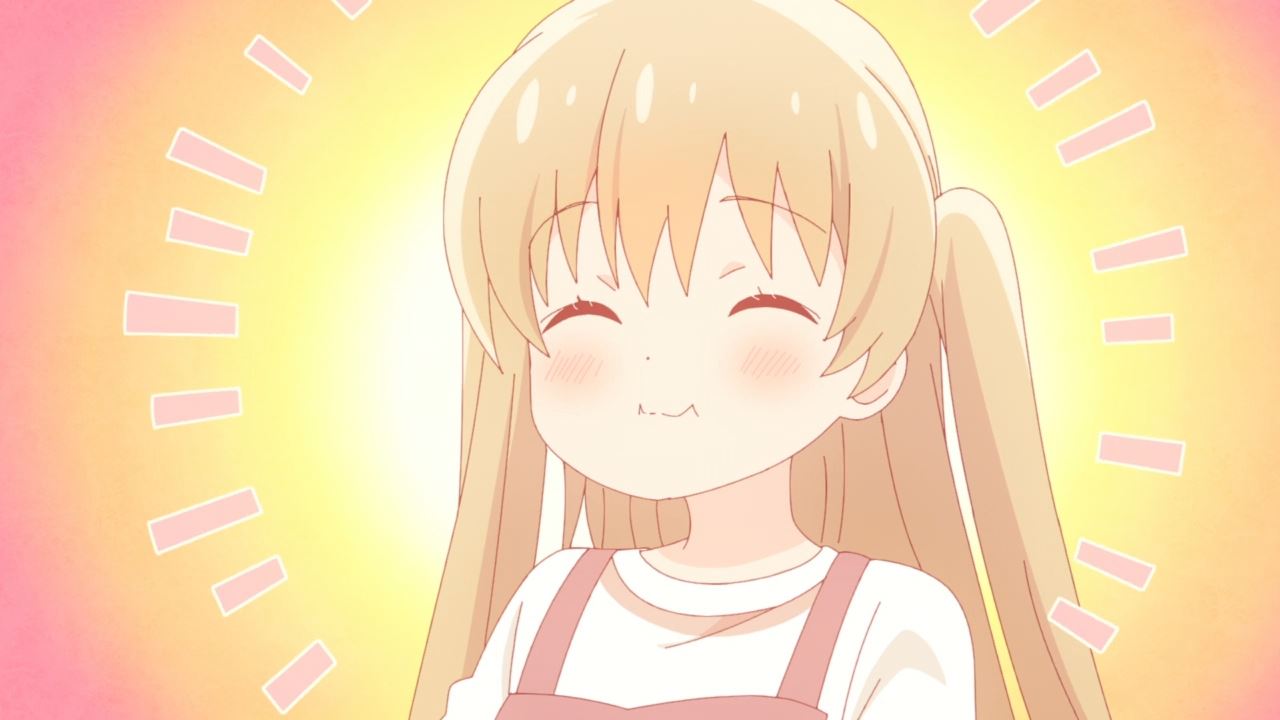 Sure enough, Koharu is satisfied that her grilled char is delicious. Good job on cooking your first catch fish, Koharu Minagi! 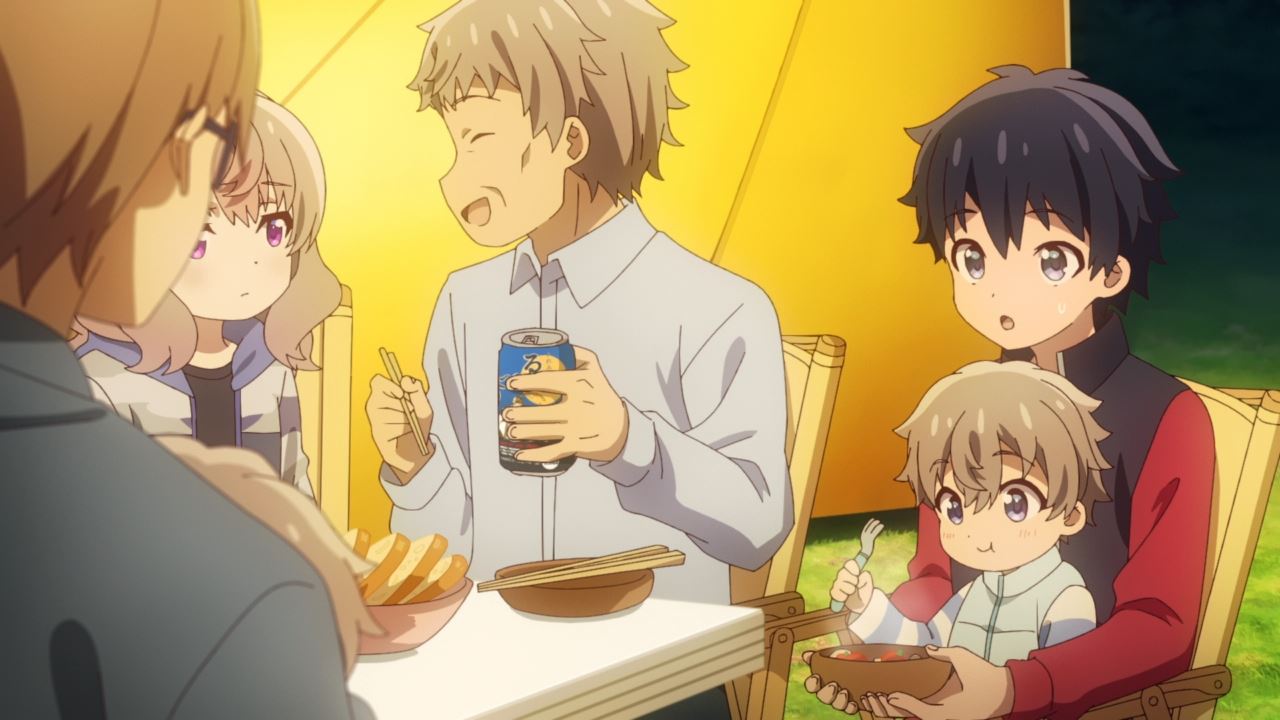 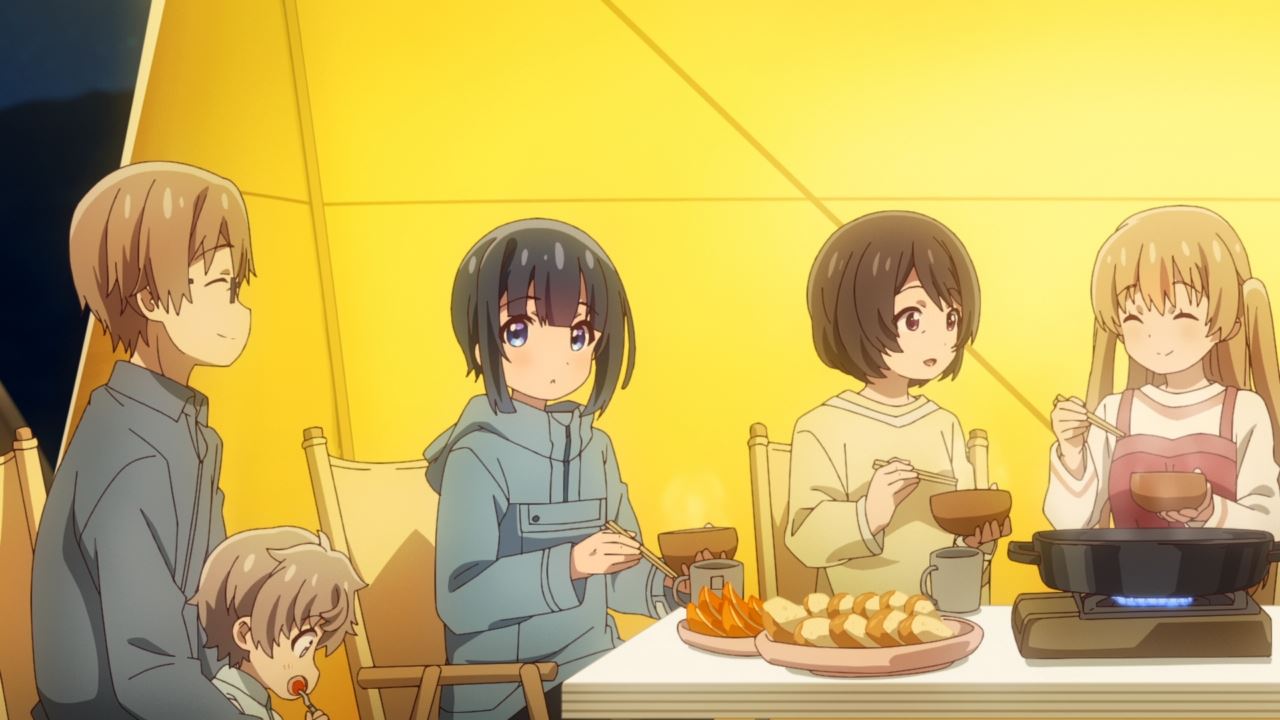 Now then, looks like the rest of them are just chilling out as they eat some rainbow trout acqua pazza while keeping themselves warm at the campfire. In any case, it was a nice fishing/camping trip for the entire family. 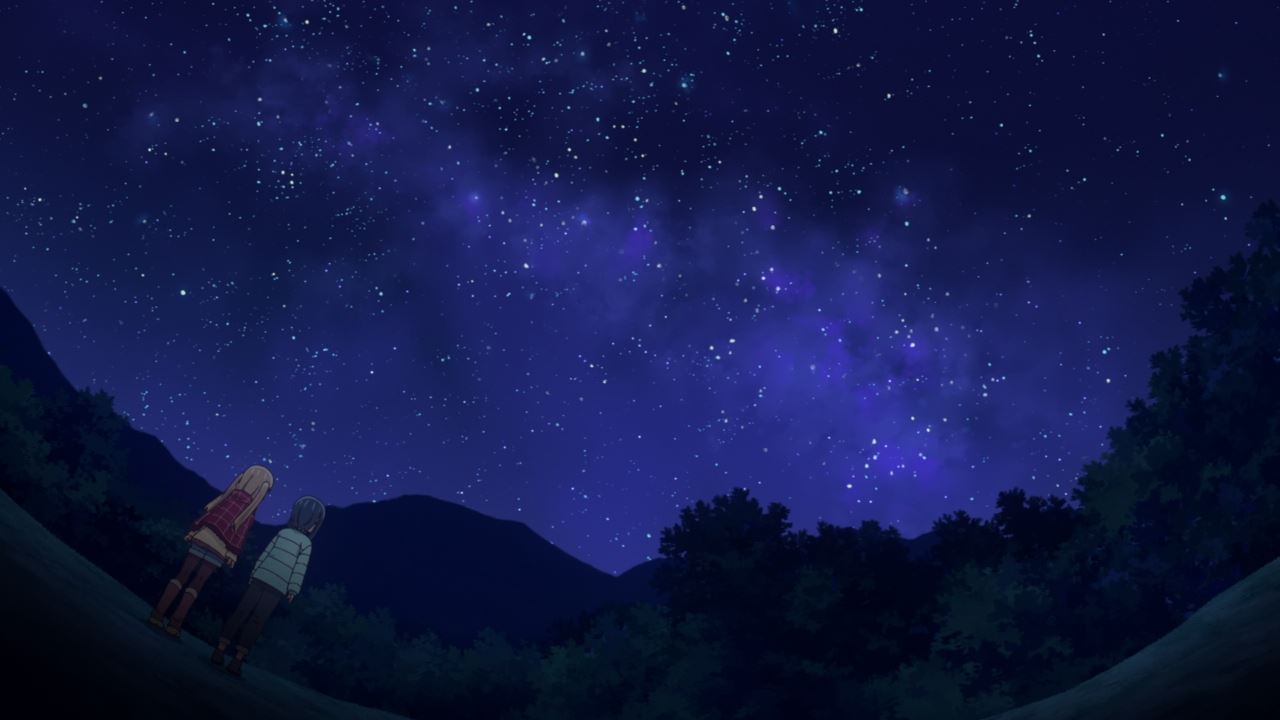 One last thing, looks like Hiyori and Koharu went to see the starry sky as they can clearly see the big dipper constellation.

Speaking of Hiyori, she really miss her biological father as she remembers the time her dad took her to various fishing trips back in the day. 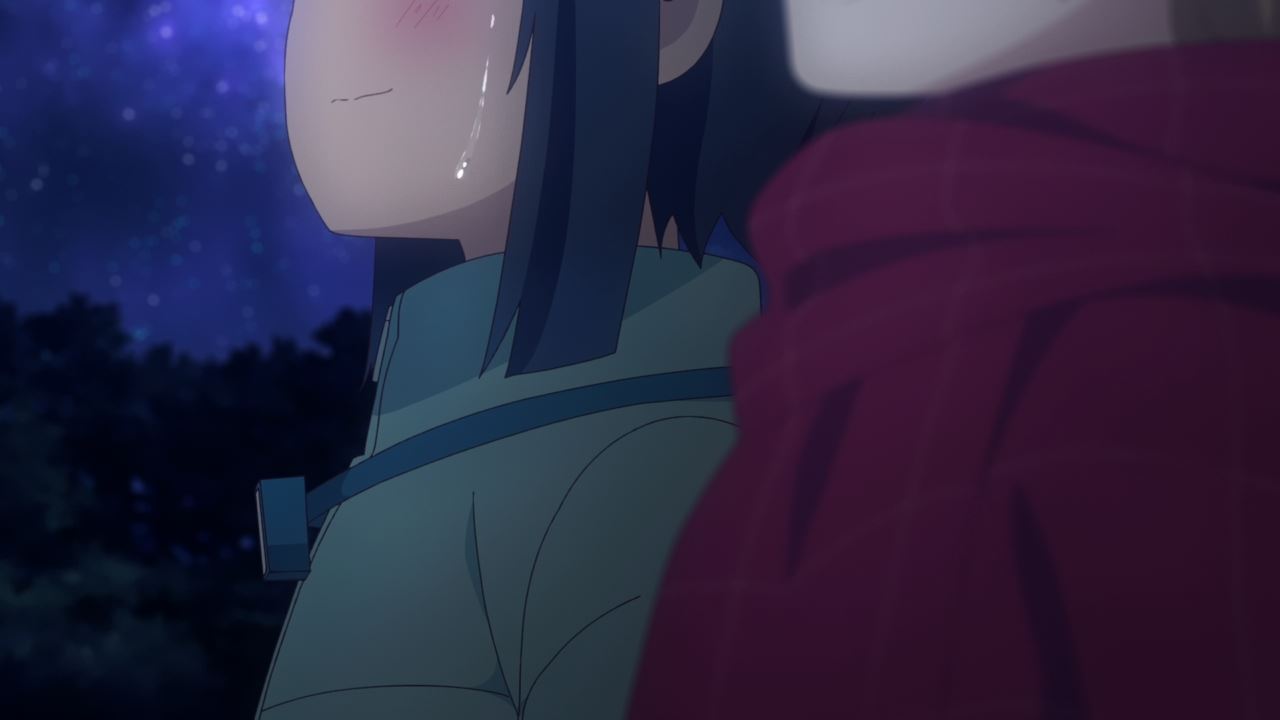 But here’s Hiyori Minagi where she shed a single tear, reminiscing the days when her real dad was still alive. Still, I’m glad that she has a new family member to lean on.

Anyways, tune in next time where we’ll see more fishing trips from both Hiyori and Koharu Minagi.