Posted on February 5, 2022 by benigmatica 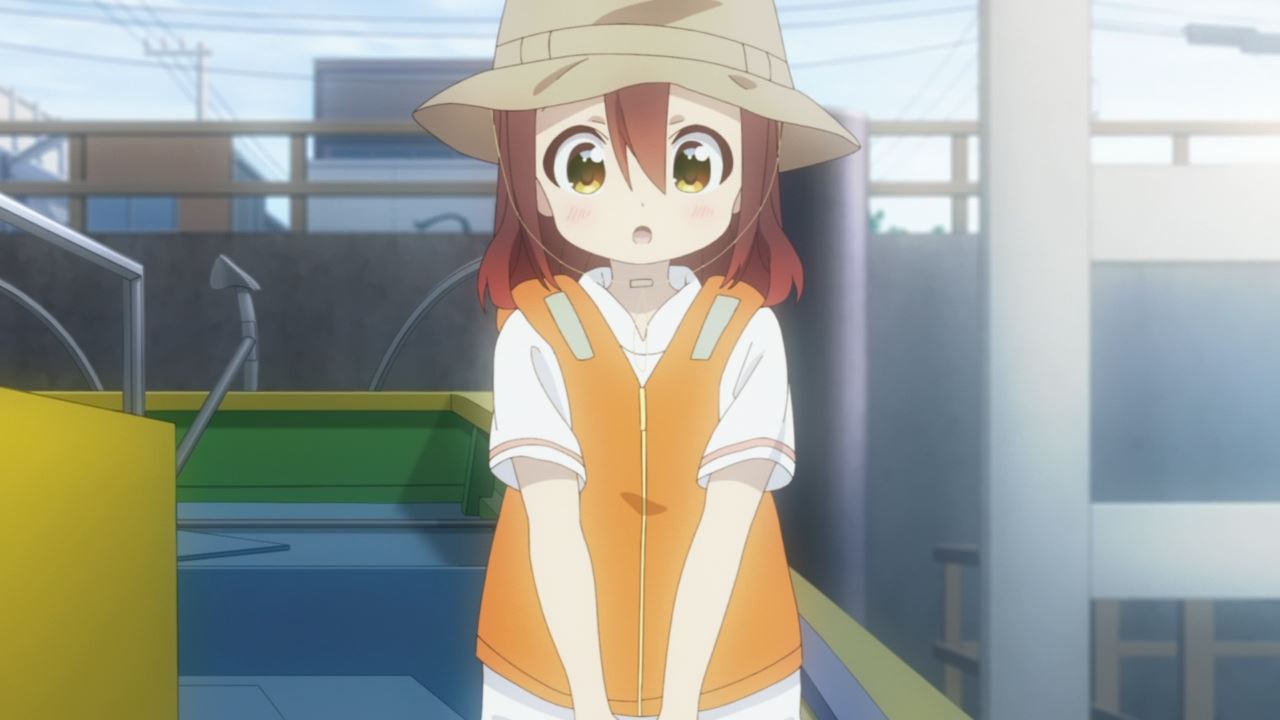 This is quite surprising as Futaba Fukumoto decided to go fishing rather than staying indoors. Man, I thought Futaba hated fishing ’cause it’s really embarrassing for a girl like her.

Still, I’m really glad that she decided to do some fishing while riding a boat. 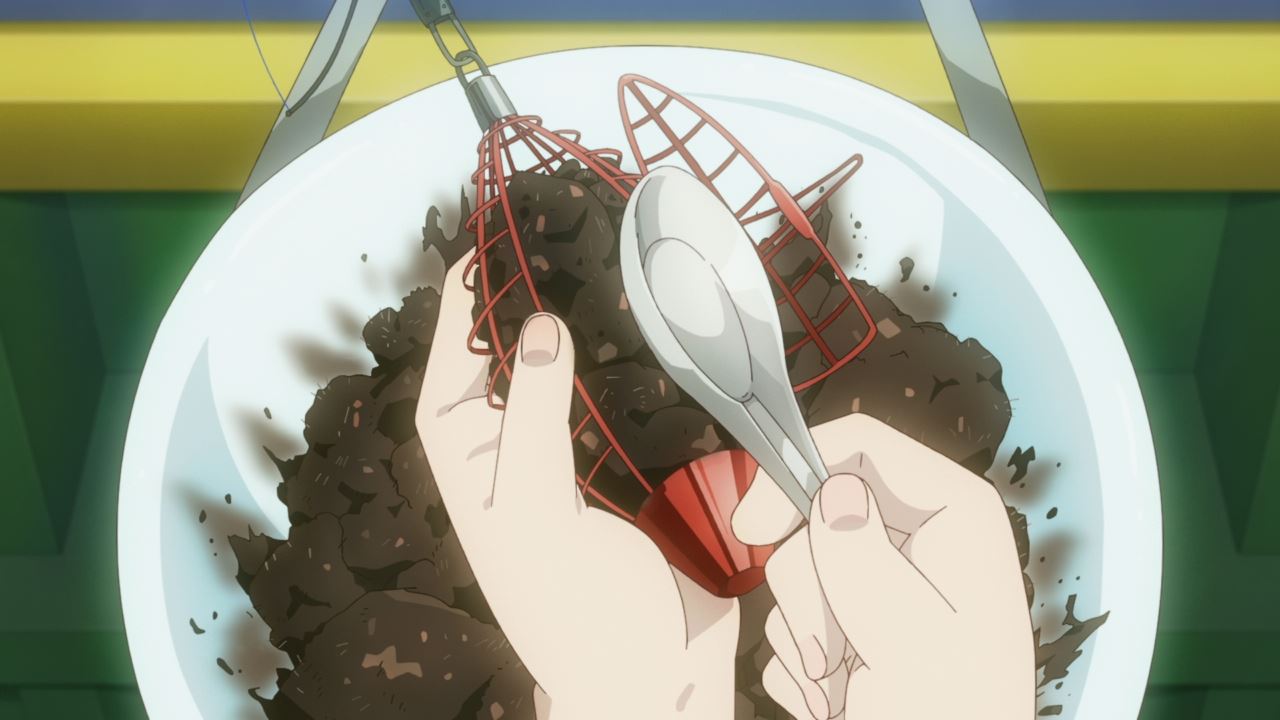 But anyways, it’s time for Hiyori Minagi to experience bait fishing where she needs to put a small amount of chum into the tiny cage to attract a school of fish. 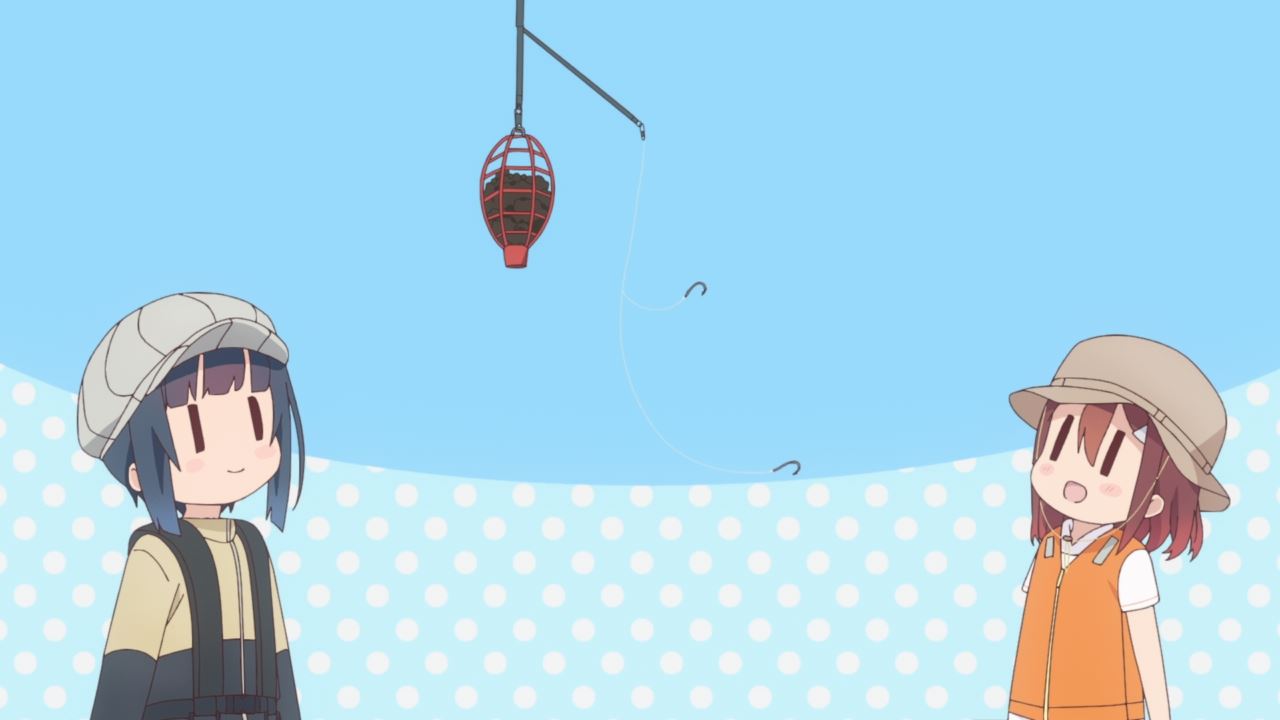 While it’s nice that Futaba showed her the ropes on bait fishing, using a cage full of chum isn’t enough to attract fish unless Hiyori used actual live bait. 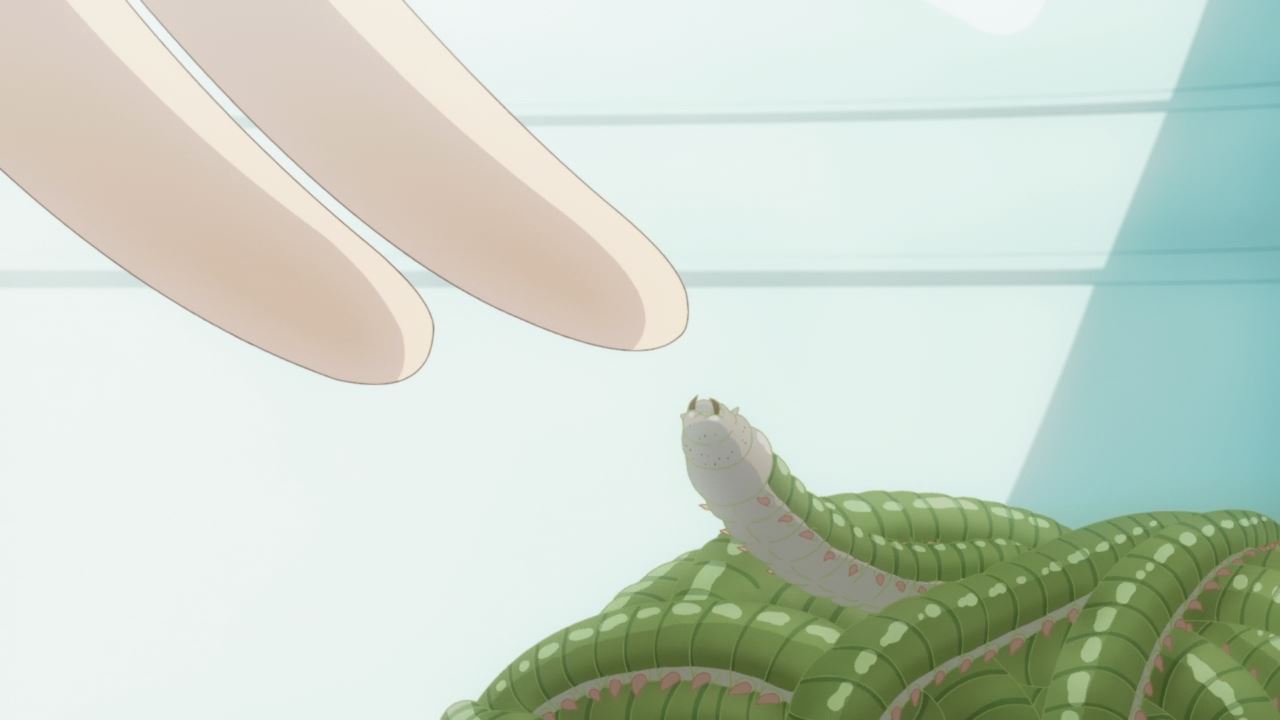 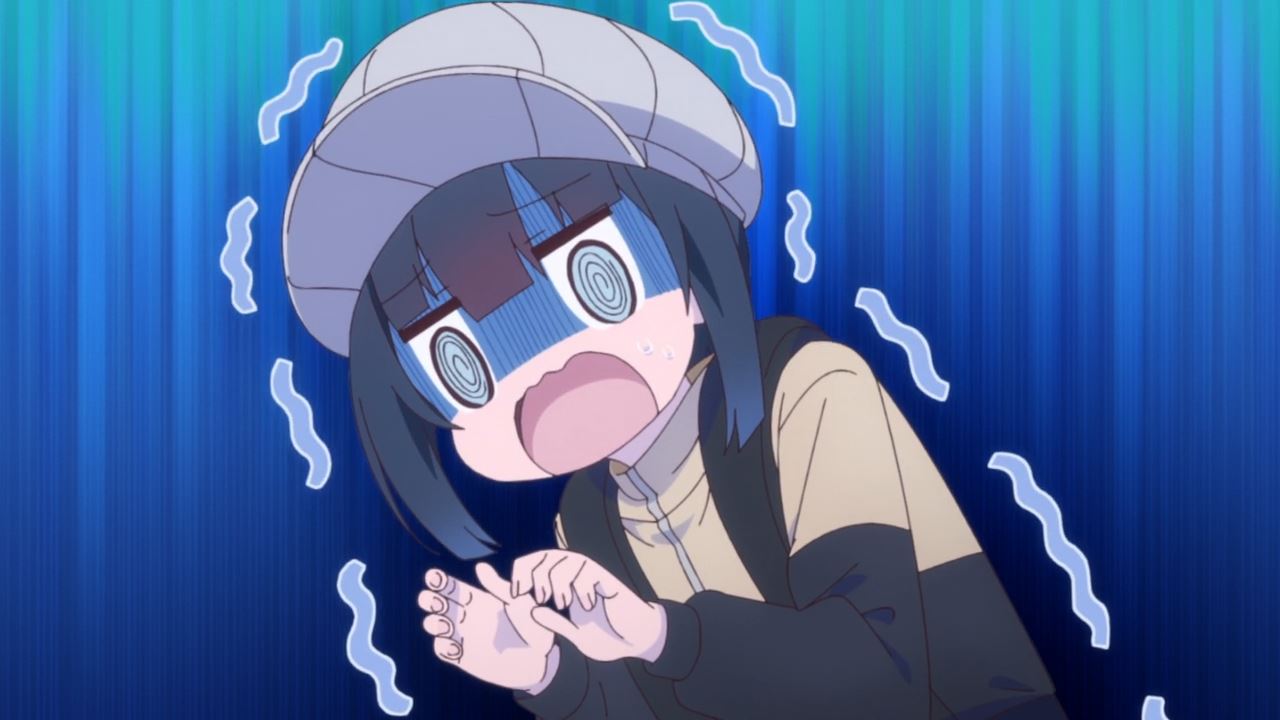 Unfortunately for Hiyori, she doesn’t like creepy crawlies like worms or bugs as she’s really grossed-out when touching them. And that’s why she prefer to use artificial fly as bait. 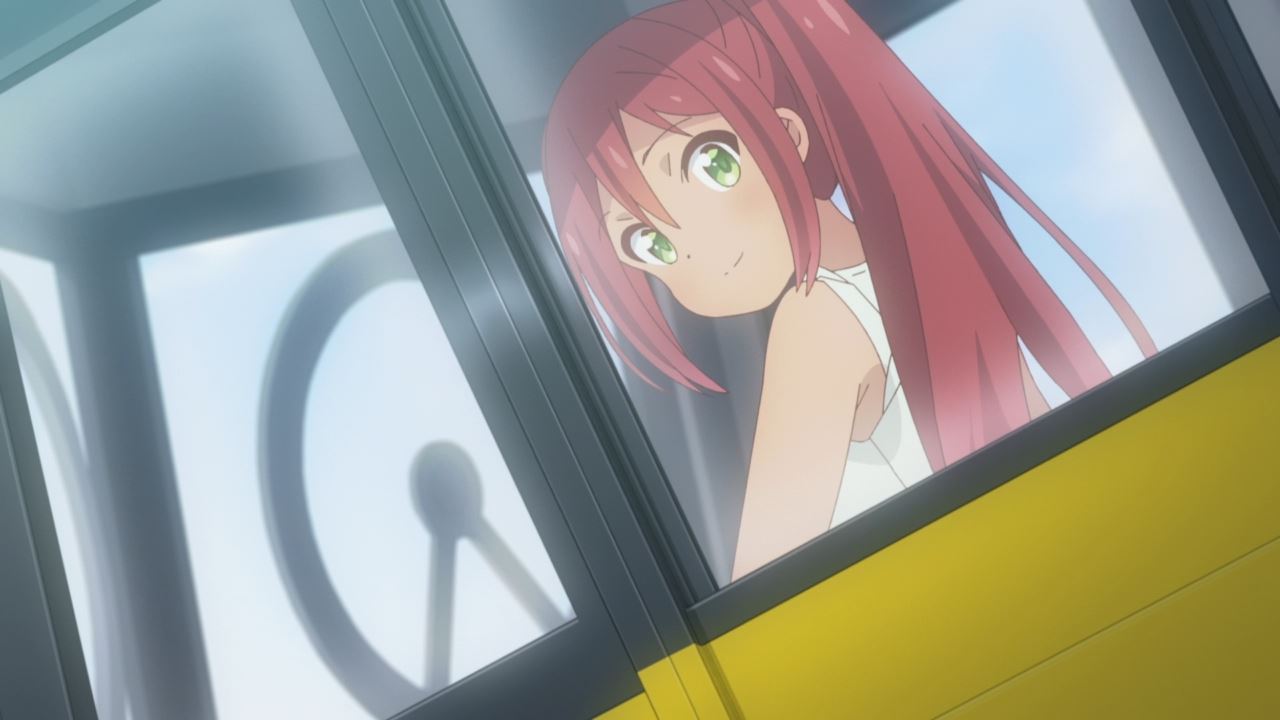 Oh yeah, here’s Ichika Fukumoto where she’s the one steering the boat on this occasion.

By the way, Koi’s father Ryouta wanted to join the fishing trip, but he’s scheduled for an interview with a prominent fishing magazine. Sucks that Ryouta-san won’t catch any fish today. 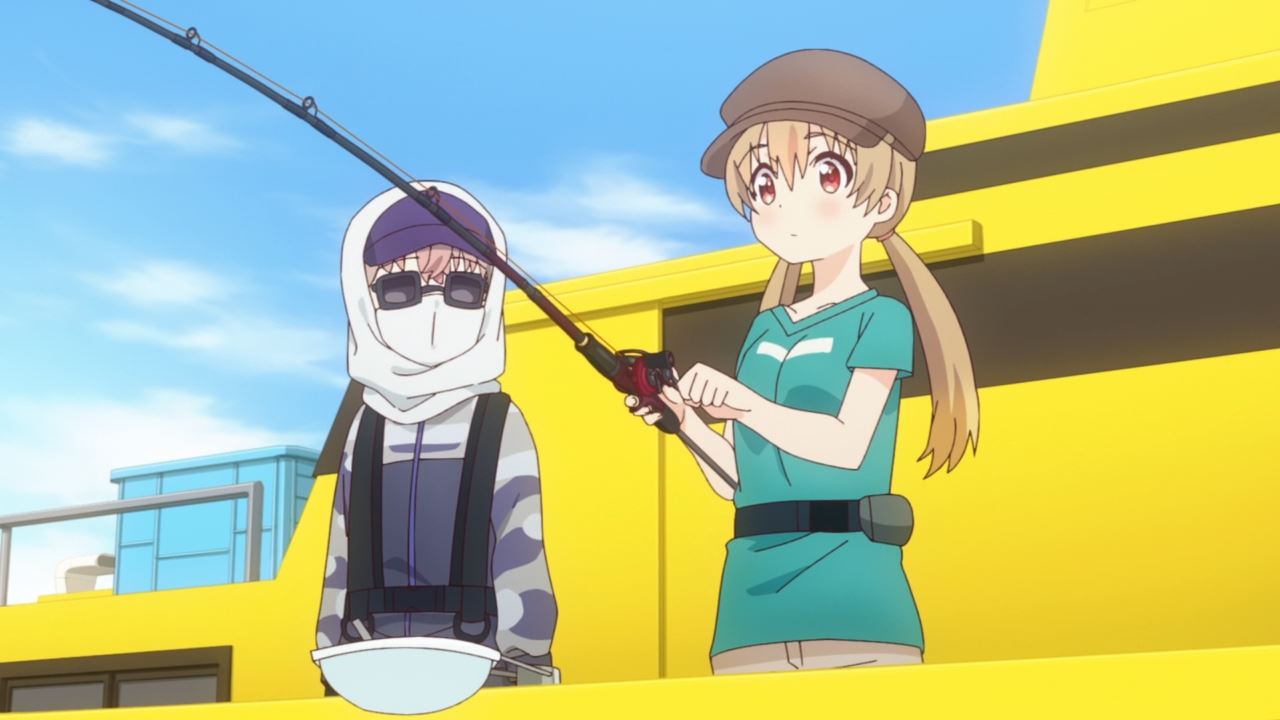 Meanwhile, here’s Koharu Minagi where she tries her hand in bait fishing. Let’s hope that she catch a fish with this method, although I wish Koharu won’t abandon fly fishing.

Oh yeah, that girl who covered herself with sunglasses and a face mask? That’s Koi Yoshinaga where she doesn’t like getting a nasty sunburn like her father. 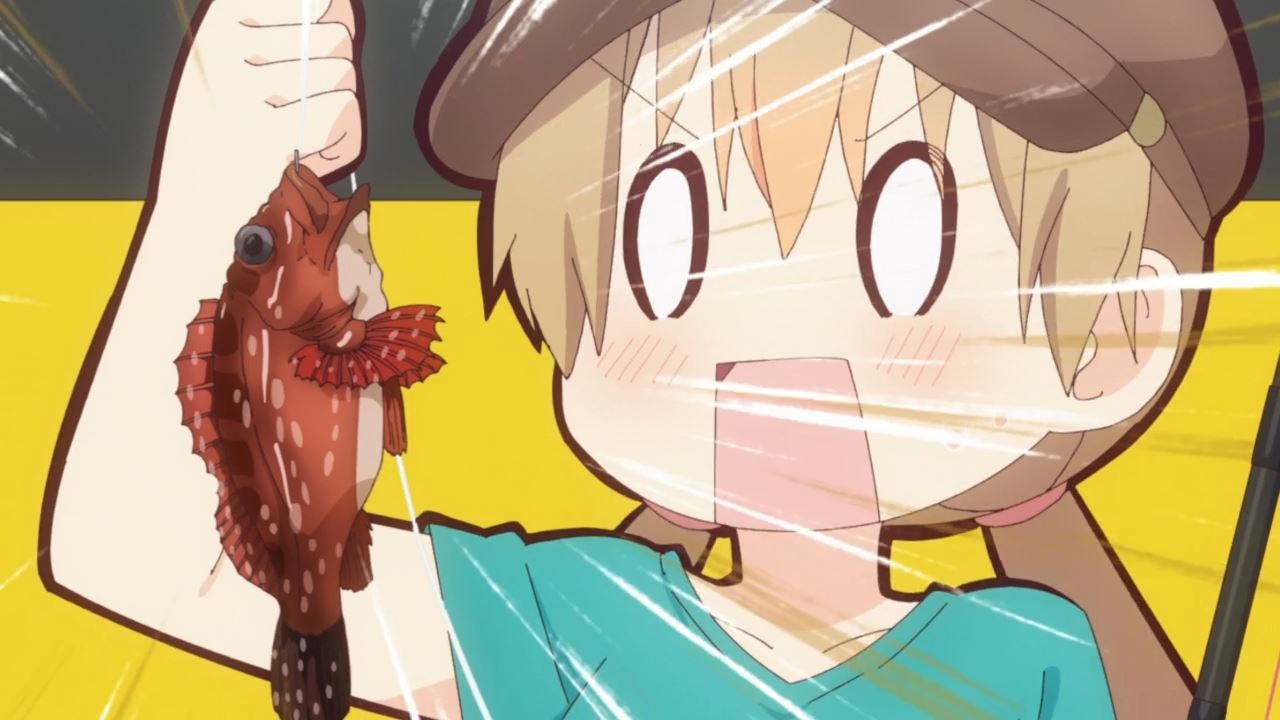 Now let’s return to Koharu where she’s surprised to catch a scorpionfish, a type of rockfish that’s not really poisonous and it’s somewhat uncommon to catch one. 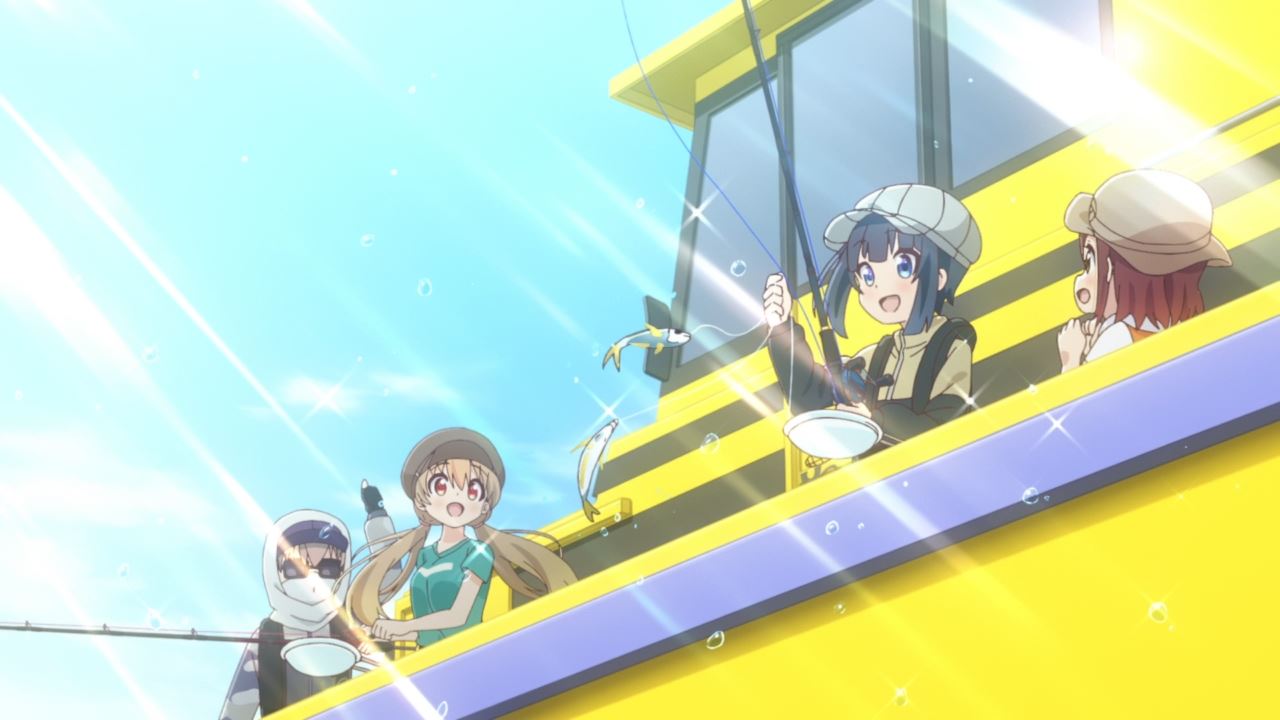 But anyways, looks like everyone had a great time catching fish while riding a boat. And by the way, Hiyori managed to get a big haul despite her fear of worms. 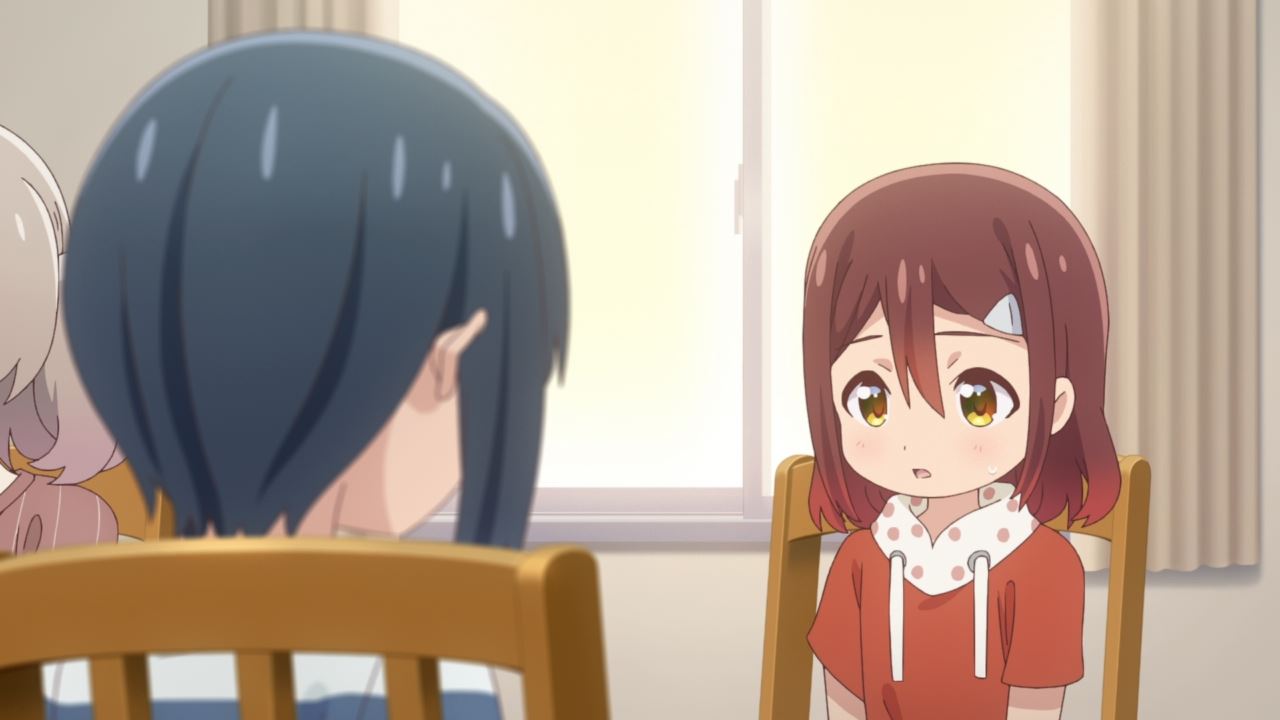 One last thing, it’s time for Futaba to explain her reason for questioning Hiyori’s hobby. Well, it has something to do about her classmates. 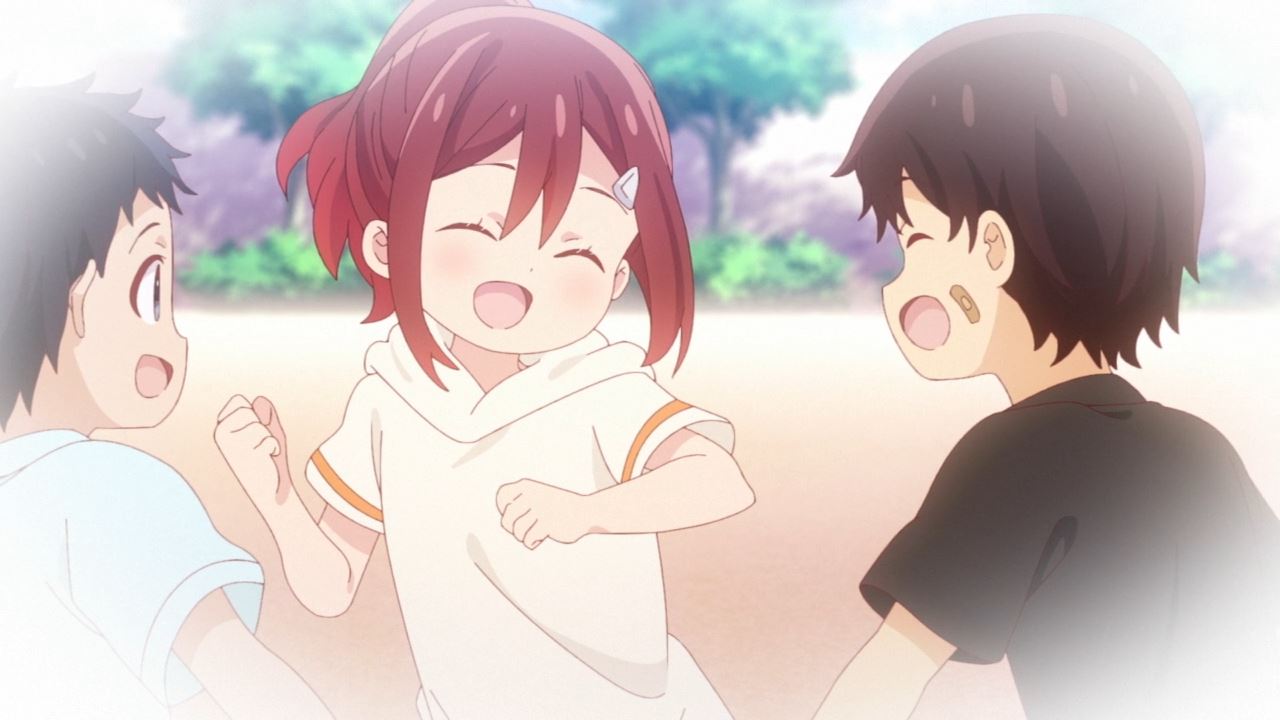 You see, she hangs out with the boys very often. And honestly, it’s a good thing that Futaba can keep up with her male classmates, but there’s a problem… 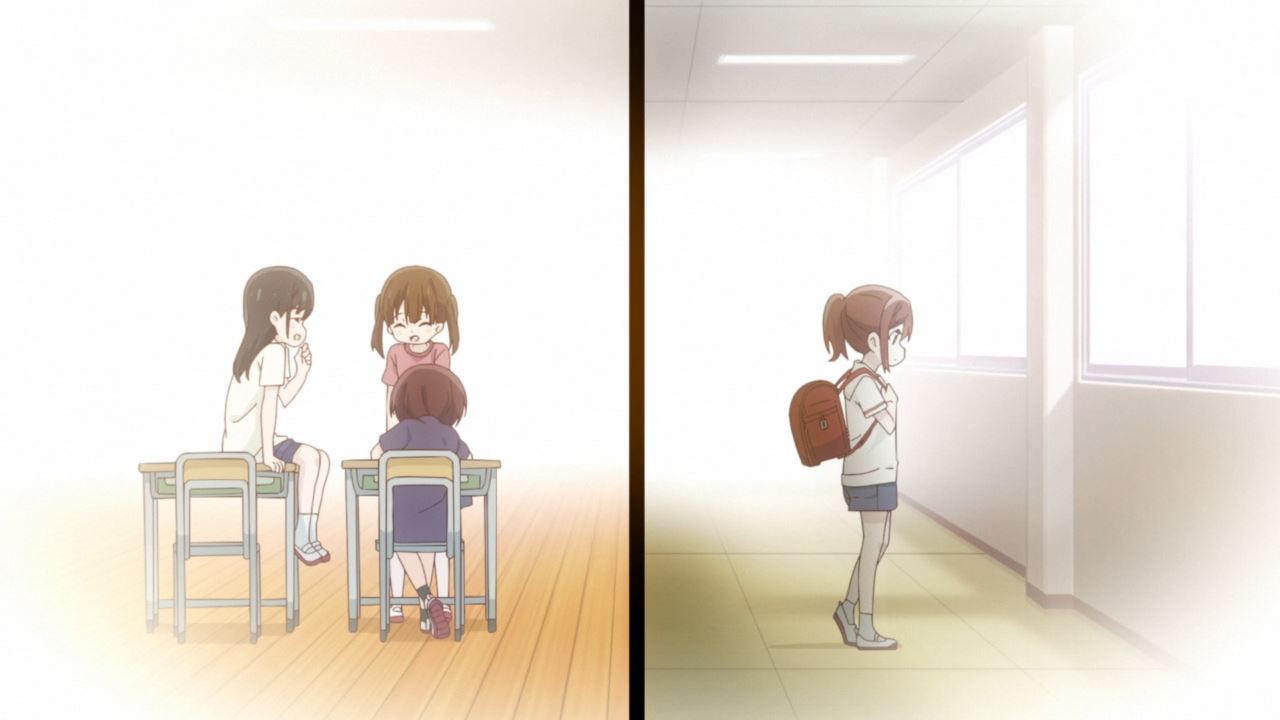 Turns out that some of the female classmate felt that Futaba Fukumoto felt different from the rest. Because of this, Futaba stopped hanging out with the boys as she tries to act feminine to the rest of the girls.

Of course, there’s another reason why she felt embarrassed when taking up fishing as a hobby is because she’s being compared to her sister Ichika. 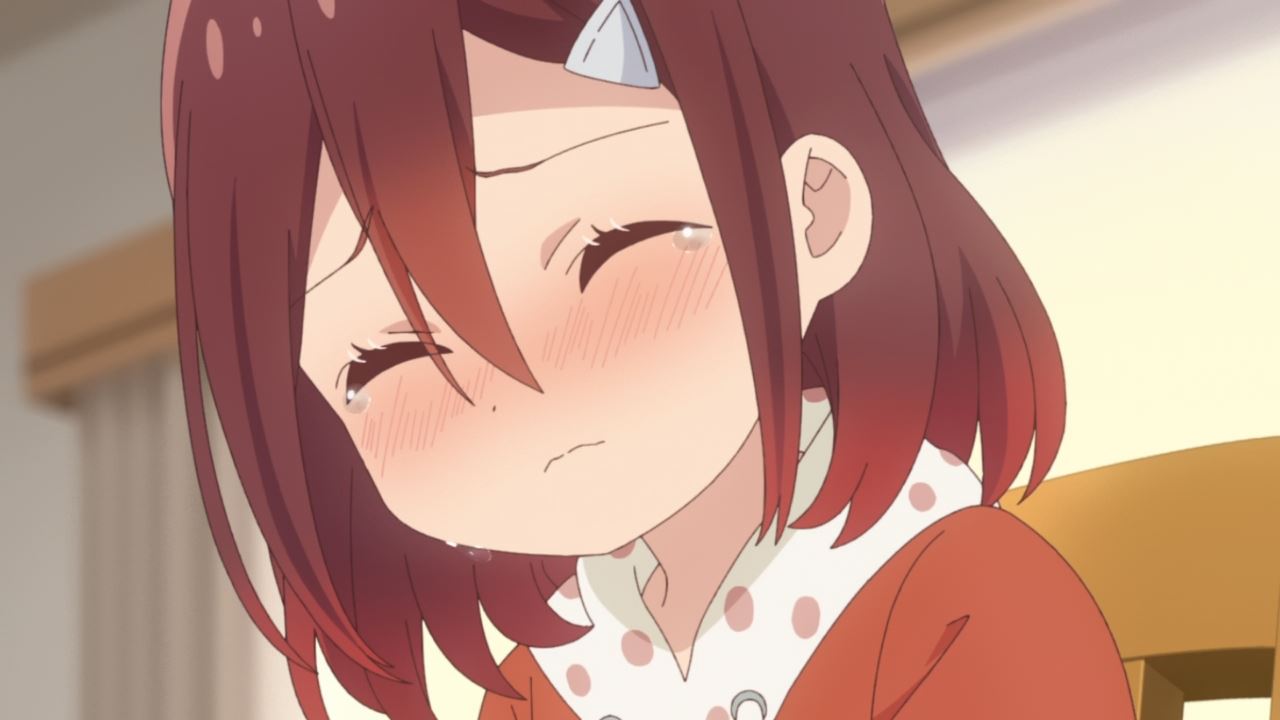 So yeah, Futaba is feeling frustrated that she’s not only being compared to Ichika, but she feared that her fellow female classmate might get weirded-out upon taking up strenuous activities like fishing. 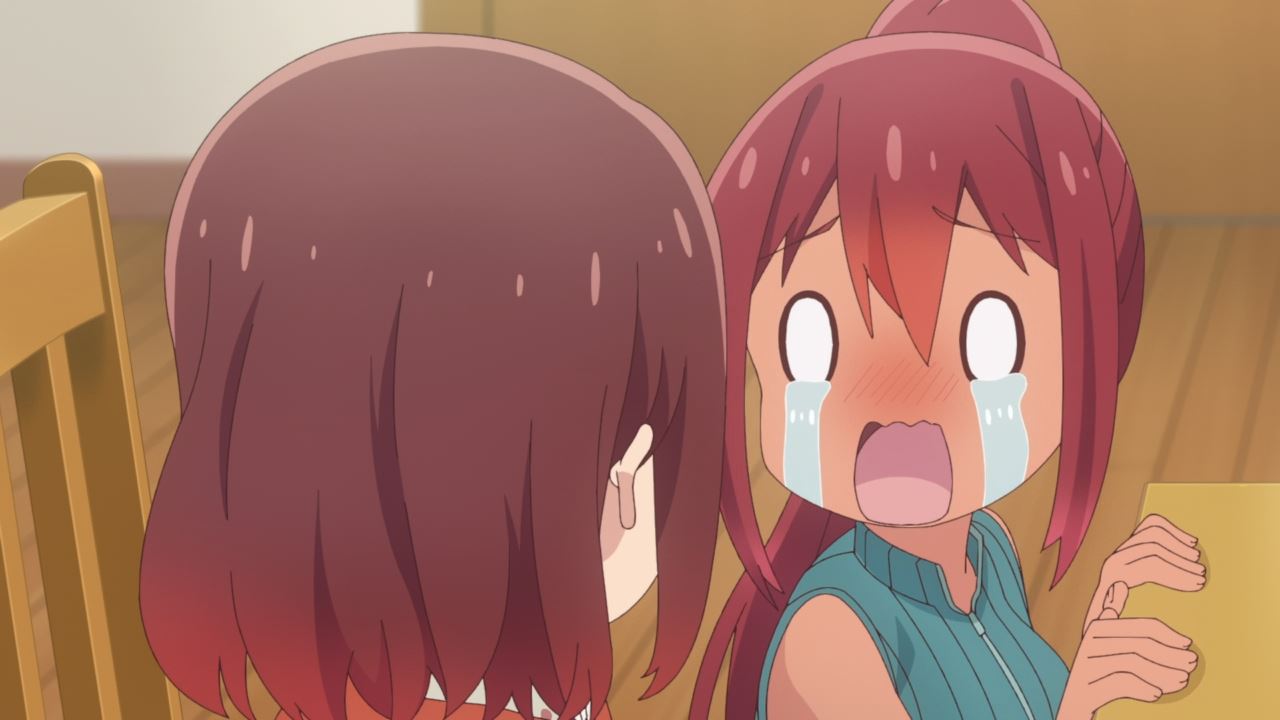 Of course, it appears that Ichika felt Futaba’s pain that she wants to hug her little sister.

It’s really nice that Ichika felt supportive towards Futuba. And besides, there’s nothing wrong on taking up fishing ’cause it’s cool! 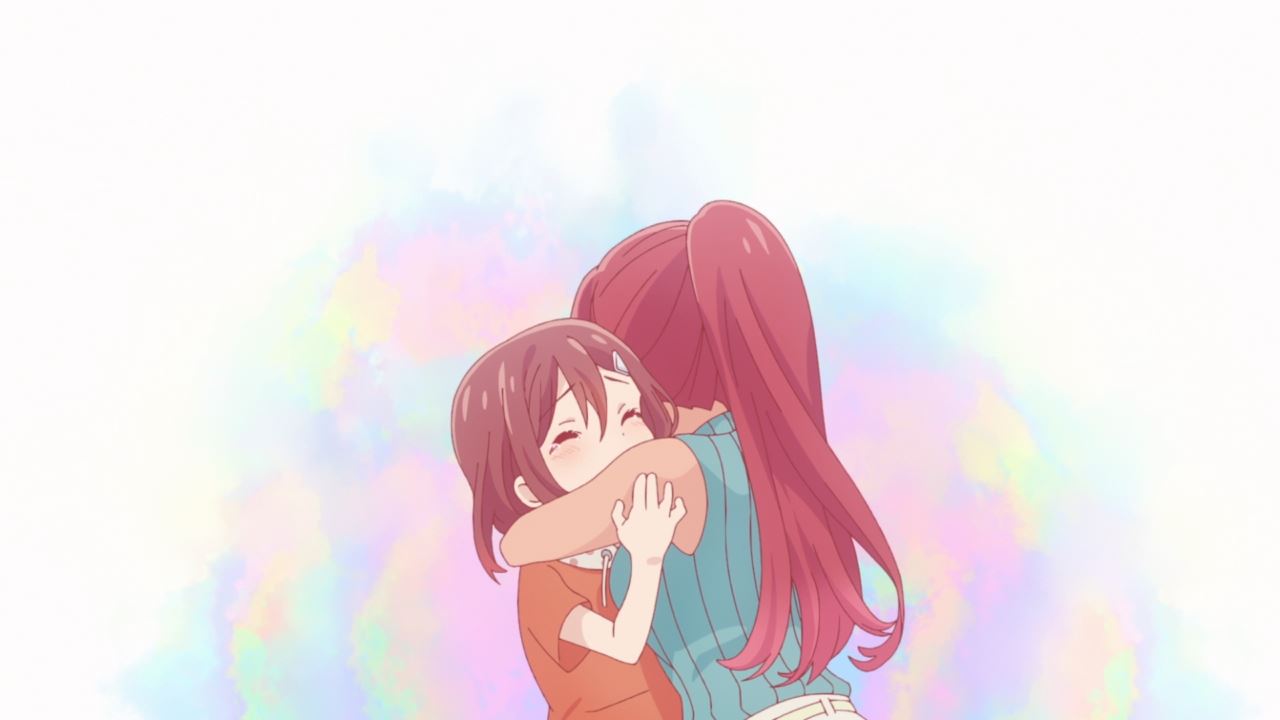 But that’s about it for Episode 5 where we end this episode with a lovely display of sisterly love. Aww, this is so sweet!

Oh yeah, as for Hiyori Minagi, I’m hoping that she can overcome her fear of bugs and other creepy crawlies. Anyways, I’ll see you next time!