Posted on February 9, 2022 by benigmatica 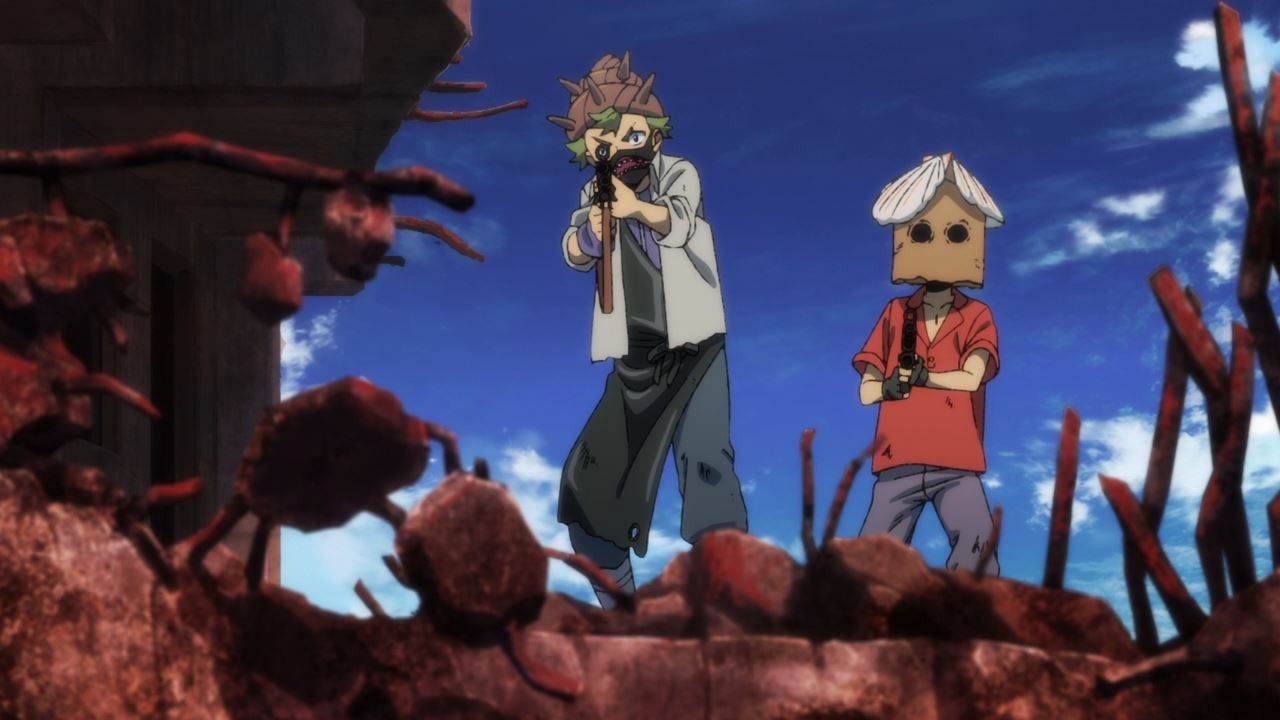 On this episode, we’ll take you to Tetsujin Town where it’s ruled by children. Well, the truth is that most of the adults were killed by a school of flying blowfish. 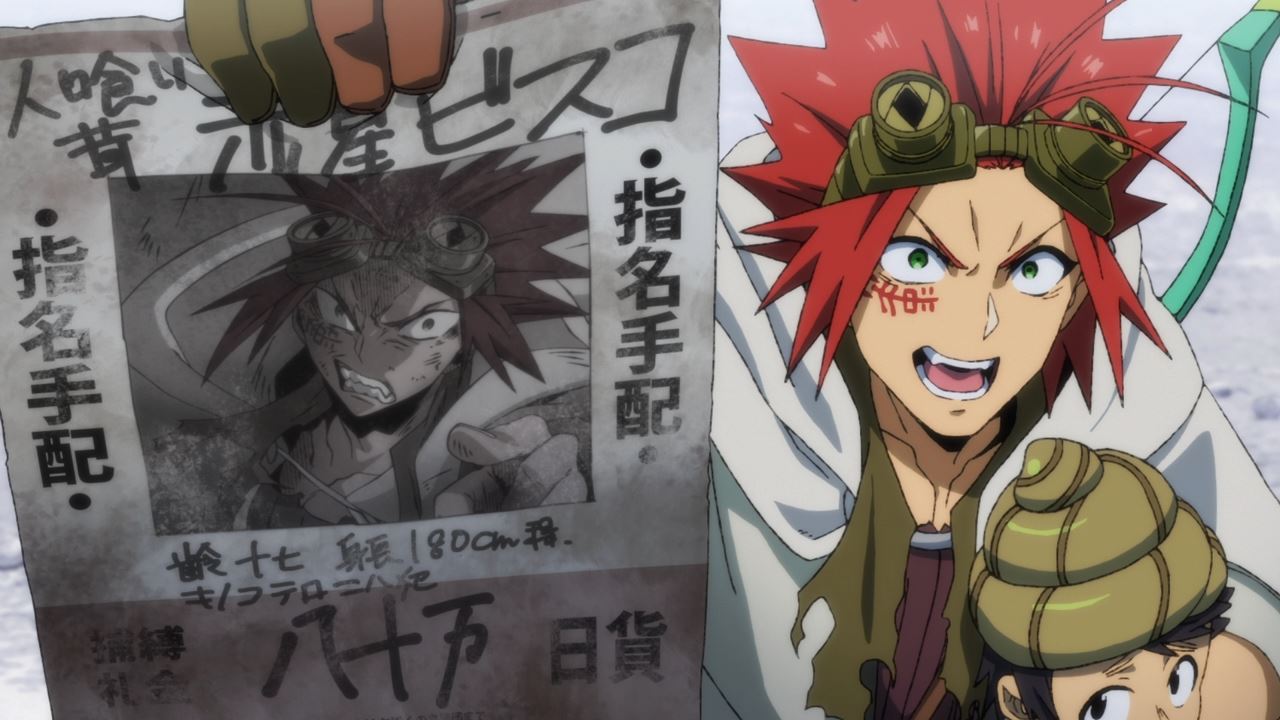 Oh yeah, here’s Bisco Akaboshi where he demanded to let him and Milo Nekoyanagi through, all while holding a kid hostage and a wanted poster of himself.

Um Bisco, y’know it’s a bad idea to introduce yourself as public enemy no. 1 ’cause for one, you’re a good guy who wants to save your master from the dreaded Rusting disease. 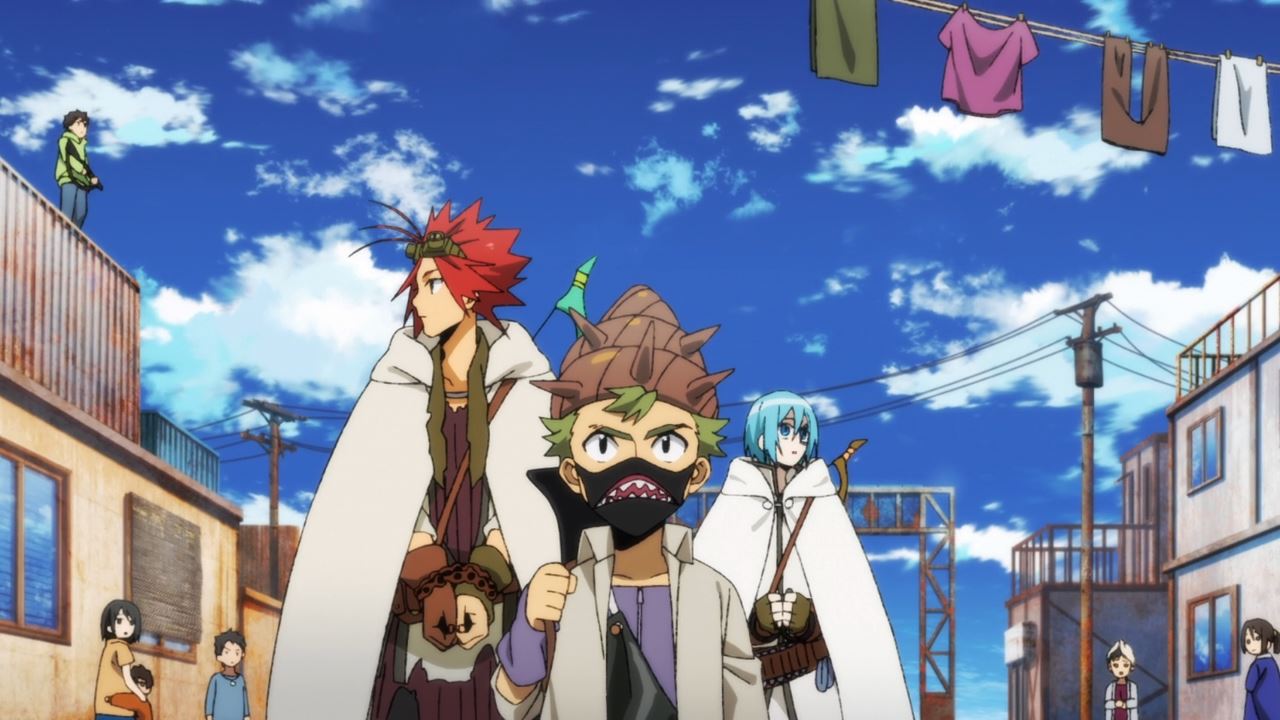 But anyways, looks like both Bisco and Milo are arrested where the children might get a reward from Governor Kurokawa.

Speaking of Kurokawa, he told all the kids to work for him in order to get the medicine that’ll cure them from the Rusting disease, although my assumption is that the governor will let those children dead anyway. 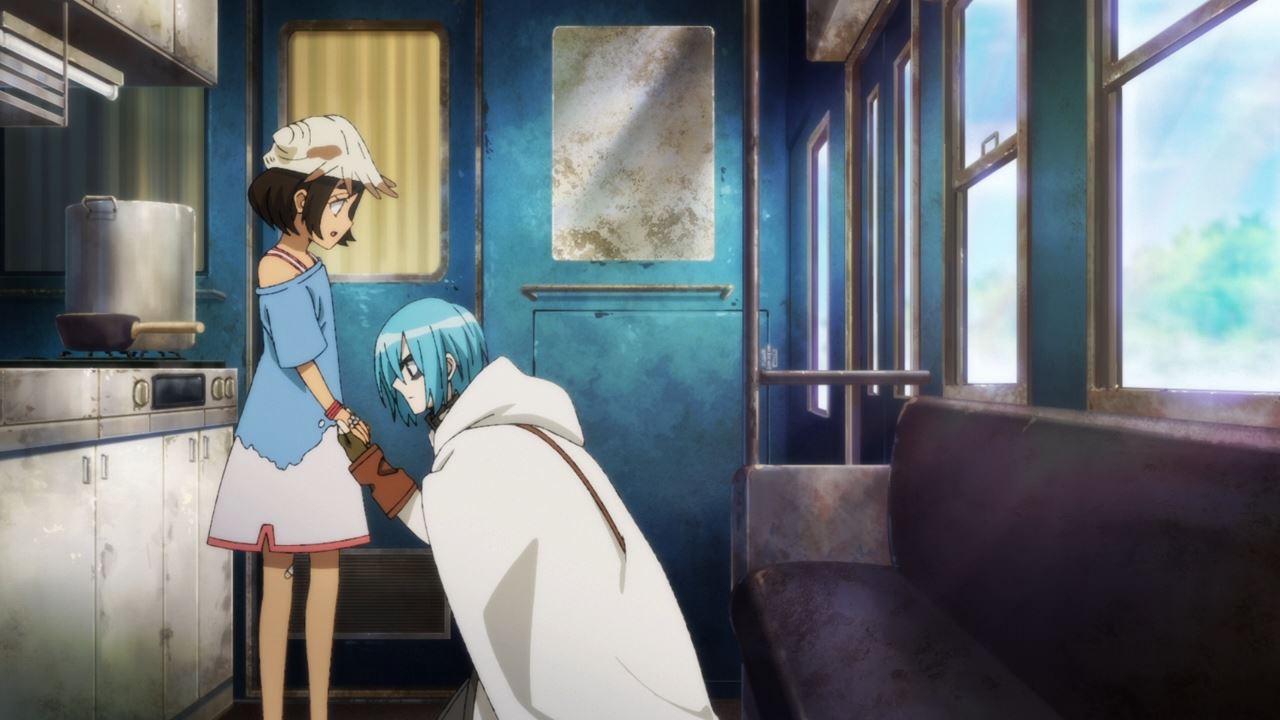 Oh yeah, about the disease these kids are suffering? That’s not Rusting by the way as Milo told the kids that they’re suffering Shellskin disease which can be cured easily.

Really glad that Bisco brought Milo along the ride ’cause the doctor can cure people with the right medicine, using mushrooms of course. 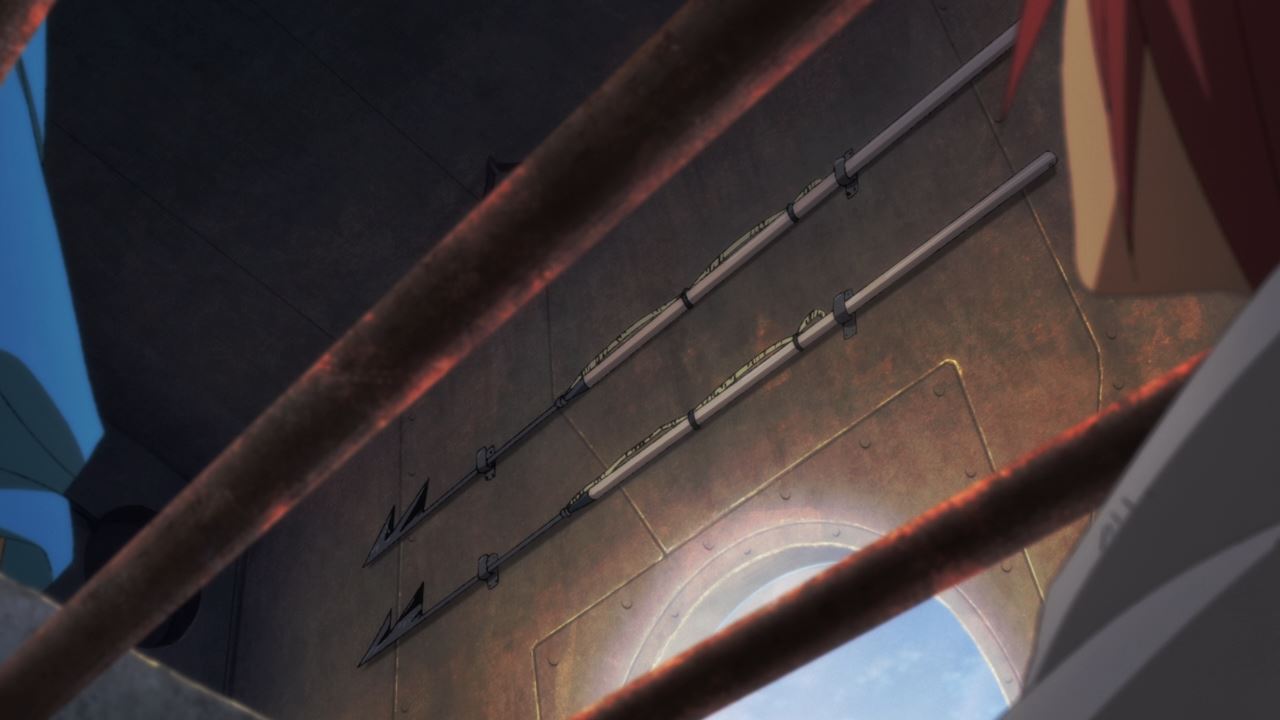 Speaking of Bisco, he’s currently in jail where he told the guards that those pair of harpoons can be used as a weapon. 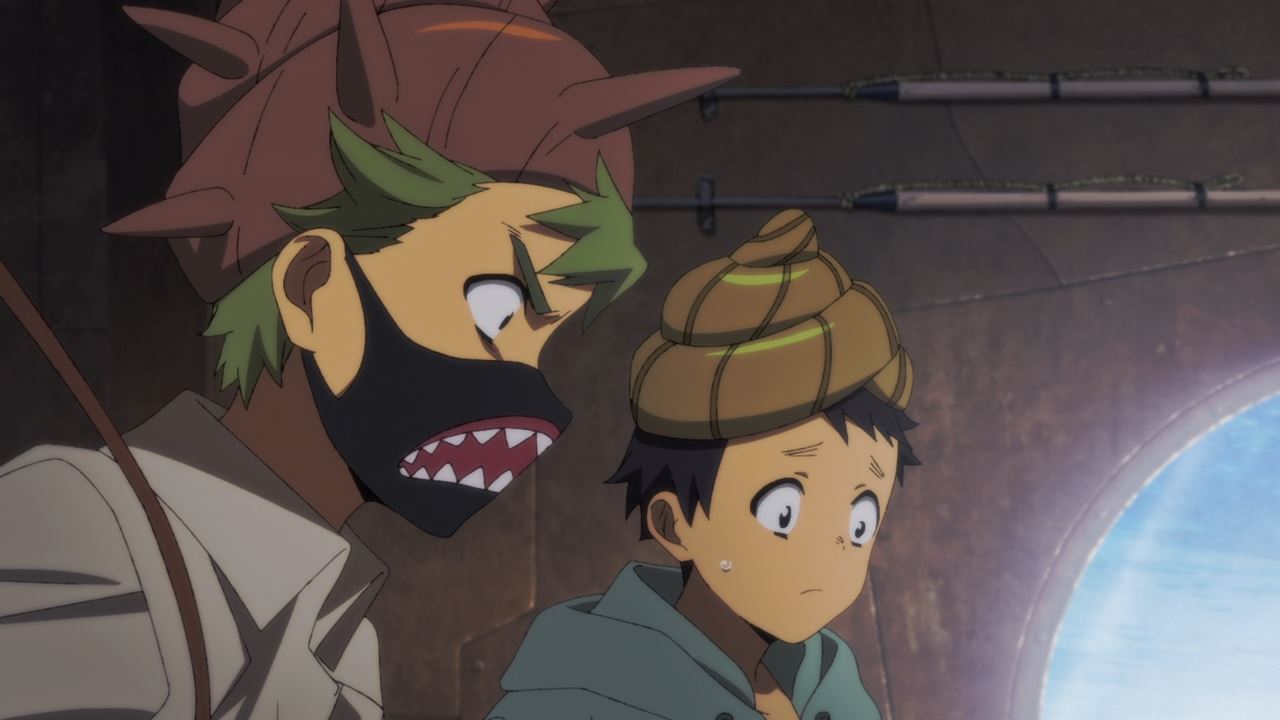 However, one of the guards named Nuts rebutted that those harpoons belonged to his late father, saying that it serves as a memento piece rather than a tool to defend themselves.

Really a shame there as those harpoons would be useful in the event of a blowfish swarm. *wink wink* 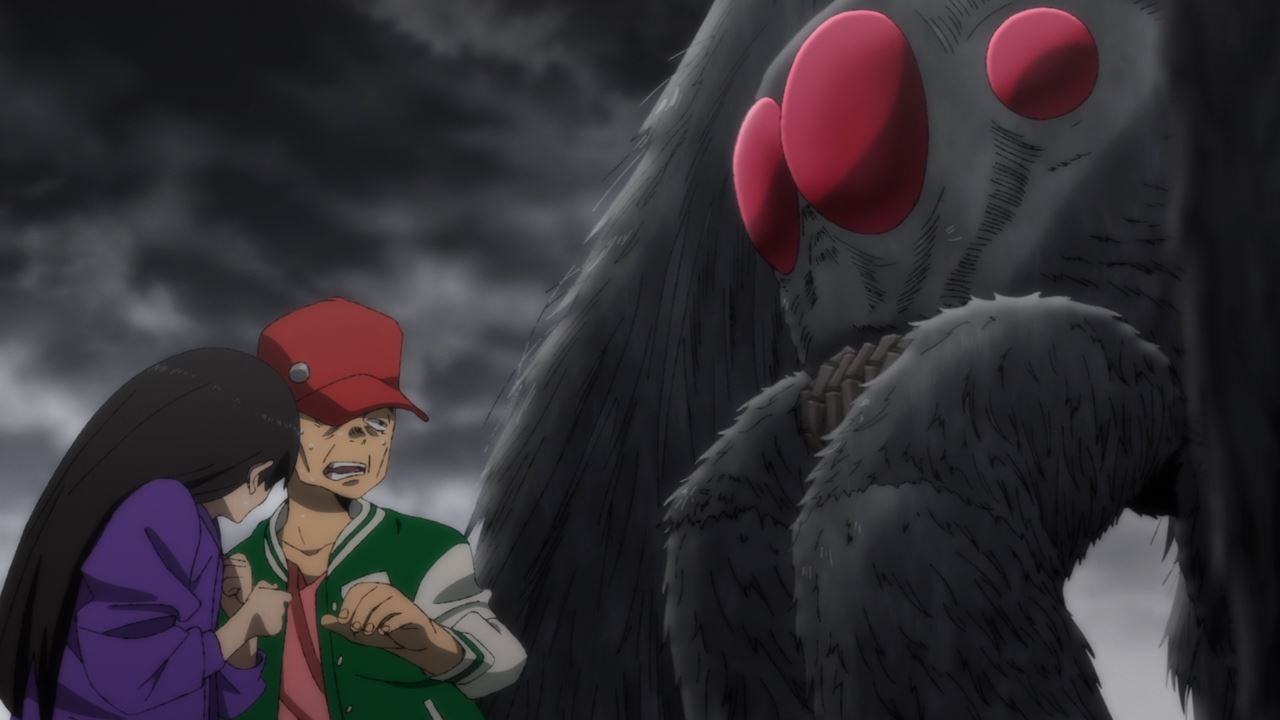 Meanwhile, let’s move onto a different town where an old couple encountered a giant spider. Oh boy, somebody save then. 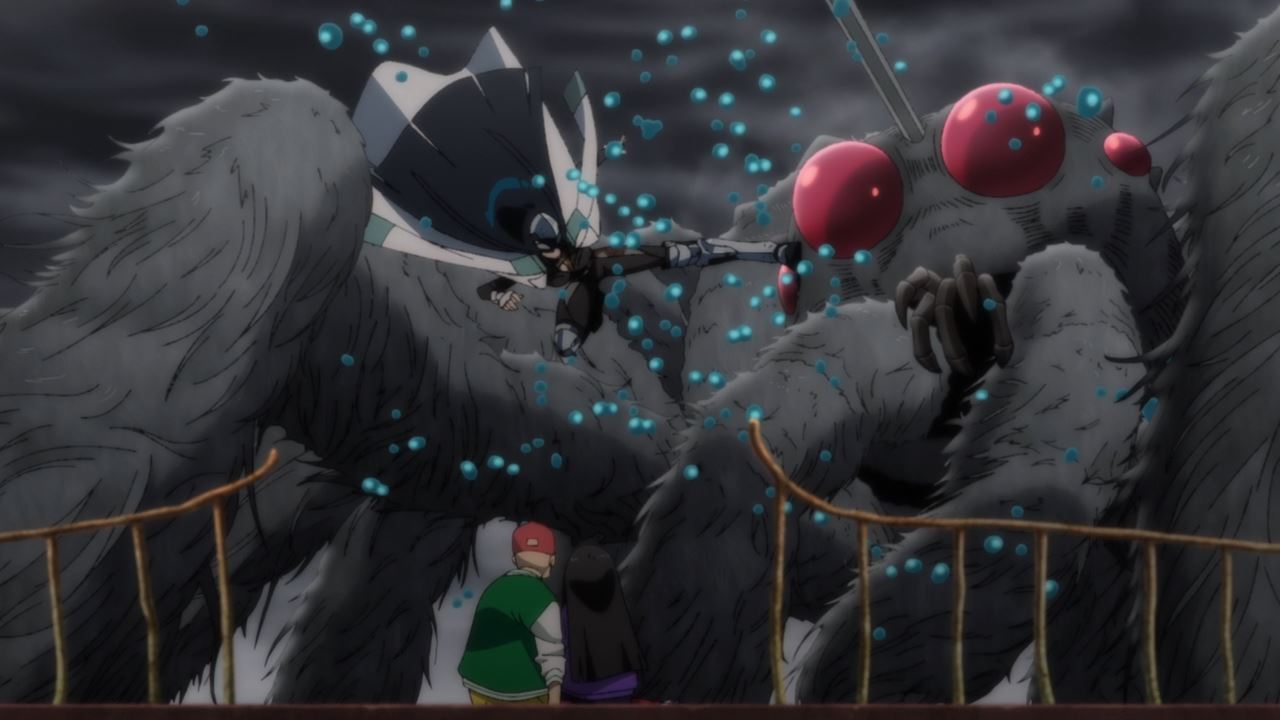 Fortunately, a certain captain of the Imihama Guard has arrived to save the couple as Pawoo Nekoyanagi is trying to rescue Milo from Bisco Akaboshi.

Man, is she acting like Inspector Zenigata despite the fact that Bisco is trying to save people from the Rusting disease? 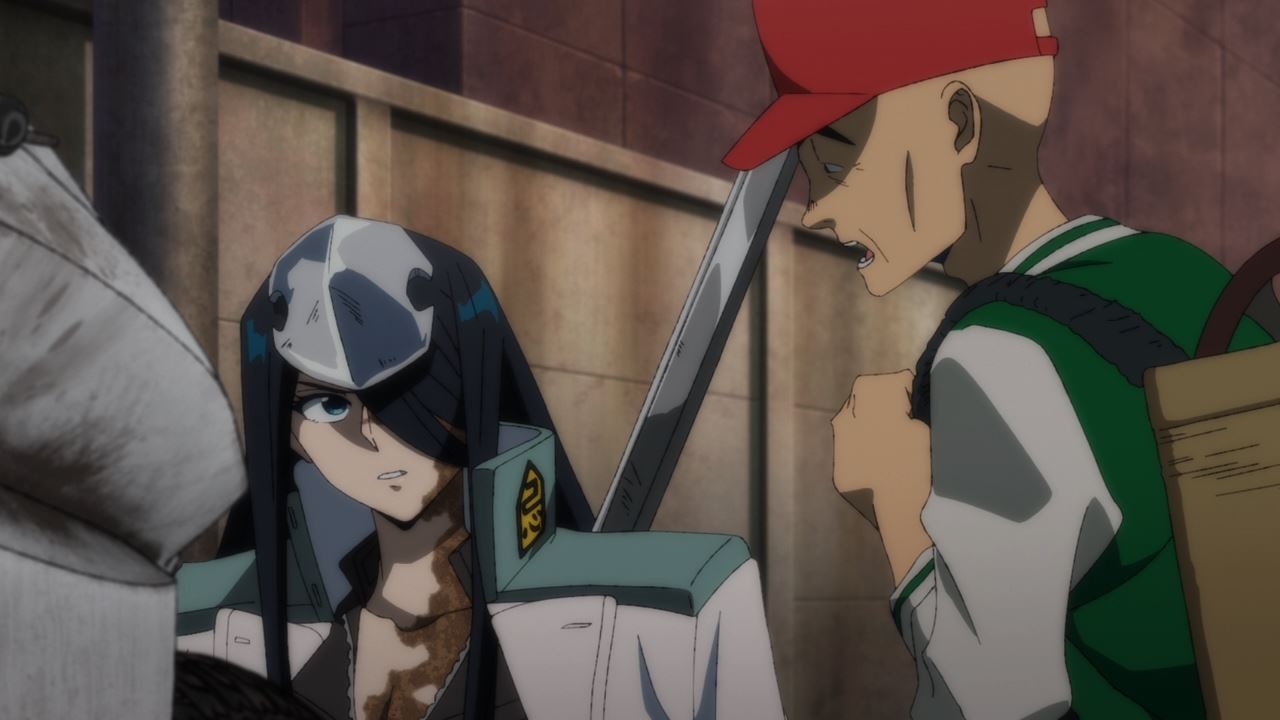 By the way, the old couple thanked Pawoo for rescuing them. Unfortunately, this place is mostly abandoned as the Rusting disease has spread across the city. 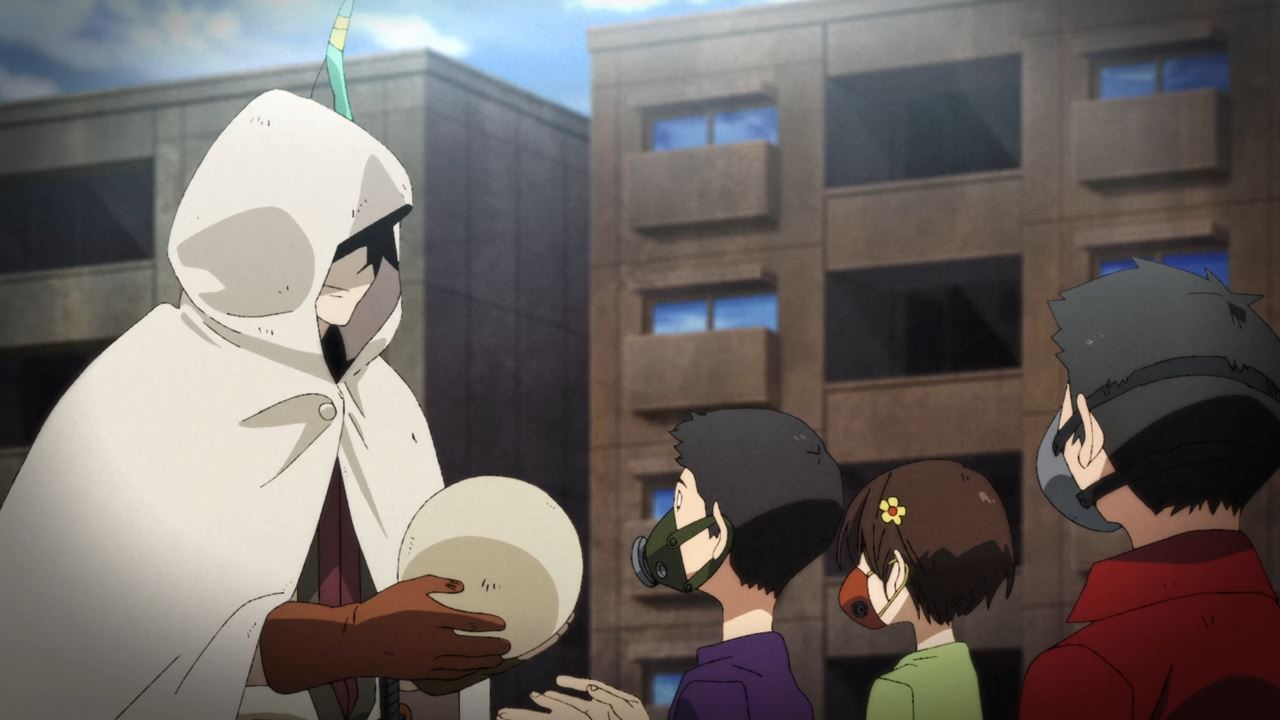 Oh, and they blame a Mushroom Keeper for spreading the disease where he originally gave them a cure to the dreaded Rusting disease. 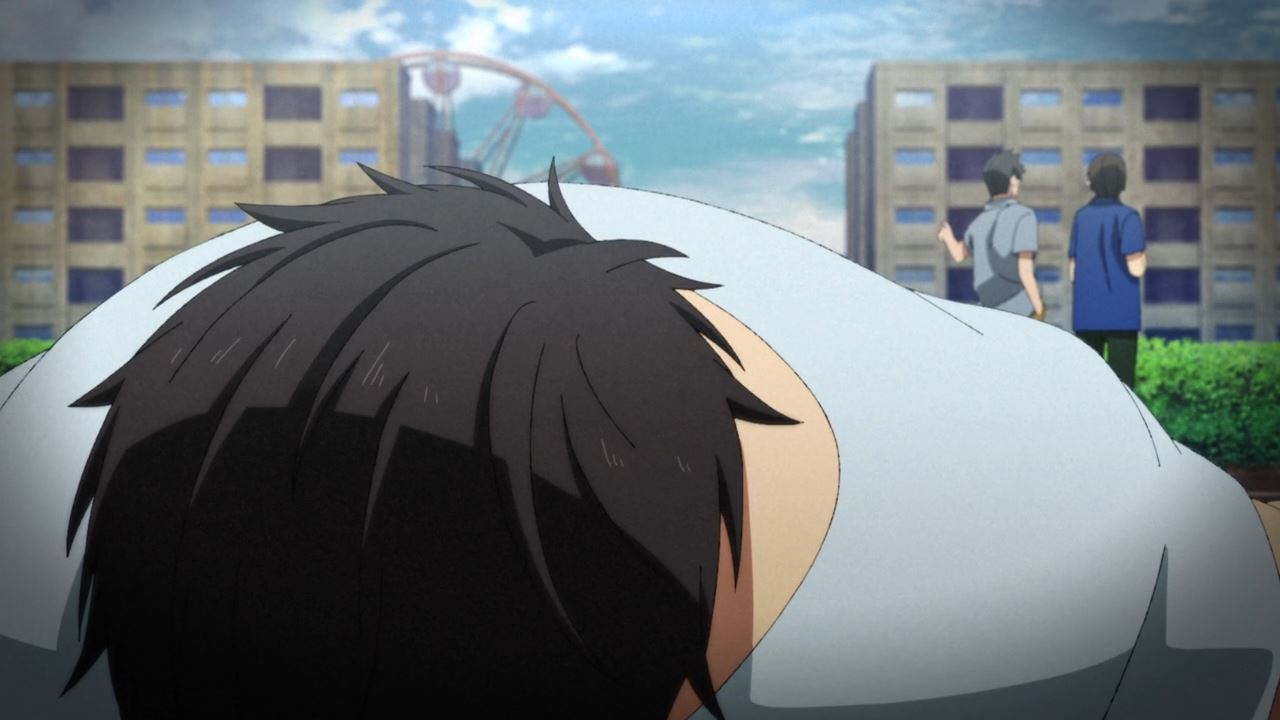 But apparently, said cure happened to be fake where people die left and right. Yeah, there are some Mushroom Keepers who are scumbags, although Pawoo blamed Bisco for it.

Um Pawoo, both Bisco and the nameless keeper are two different people. For now, Pawoo will have to stay on this abandoned town for the time being. 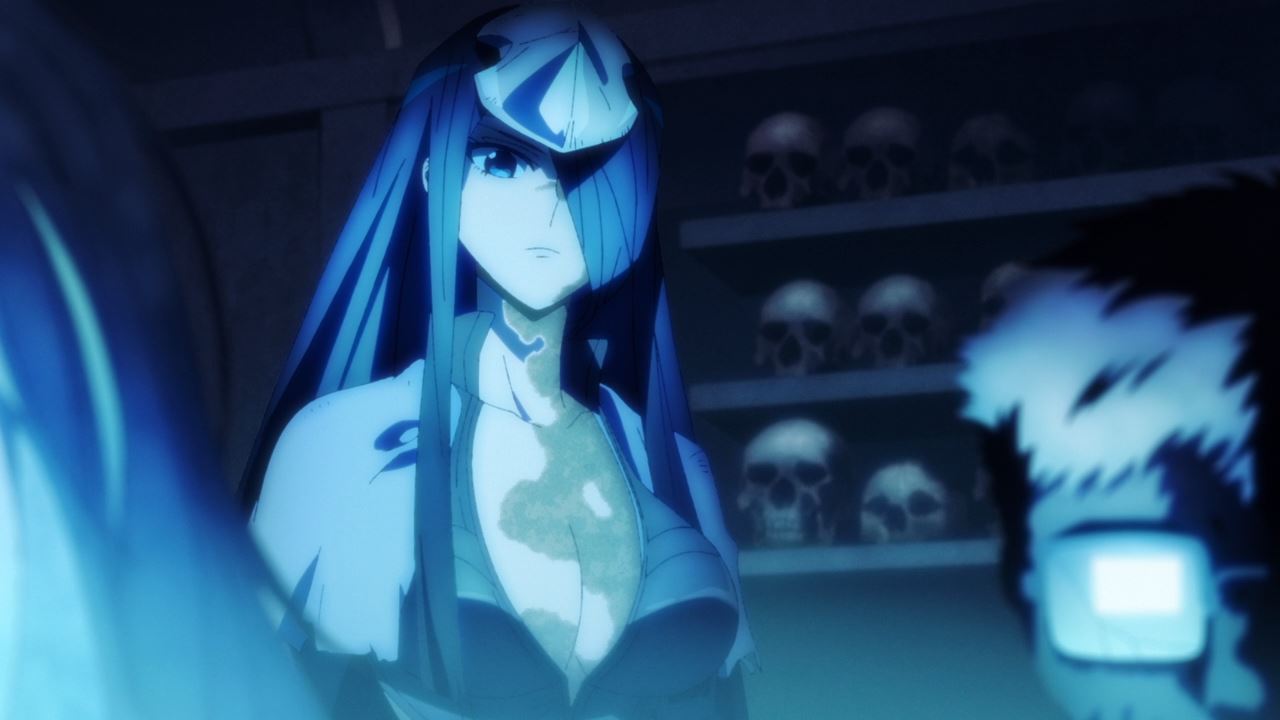 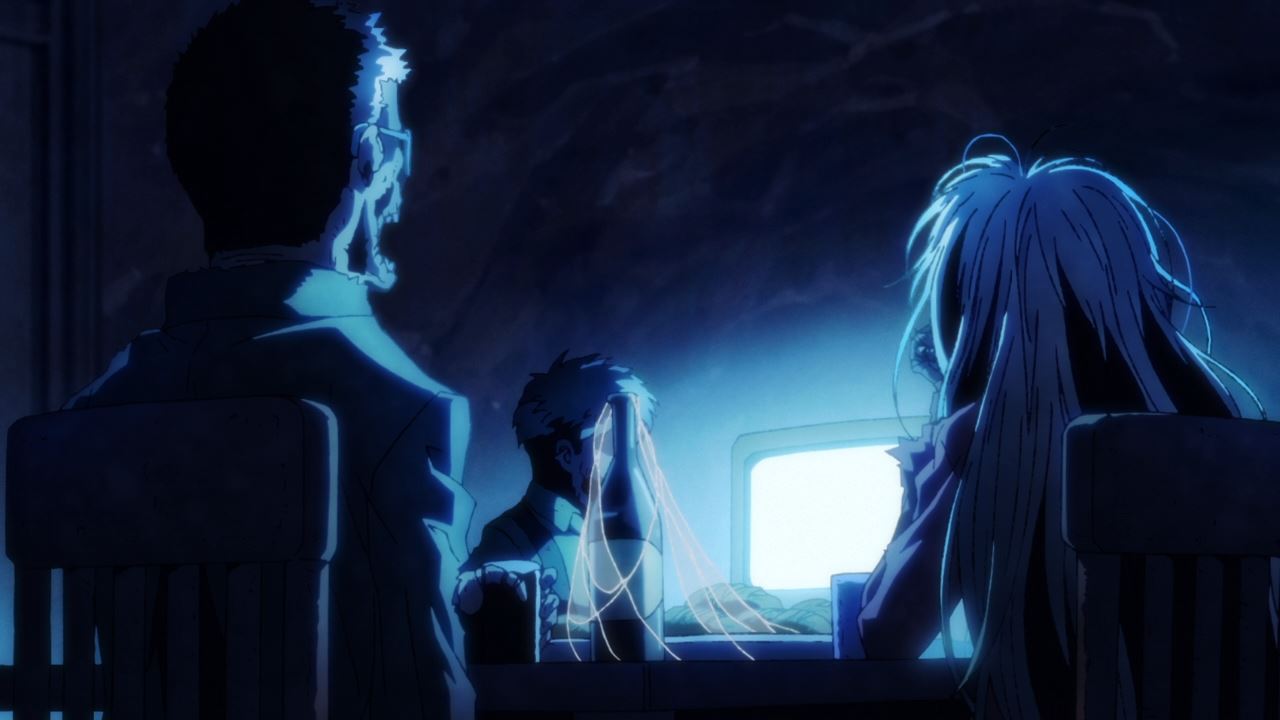 Unfortunately, seems that Pawoo Nekoyanagi changed her mind where she found a few mummified people. Man, I have a bad feeling about this! 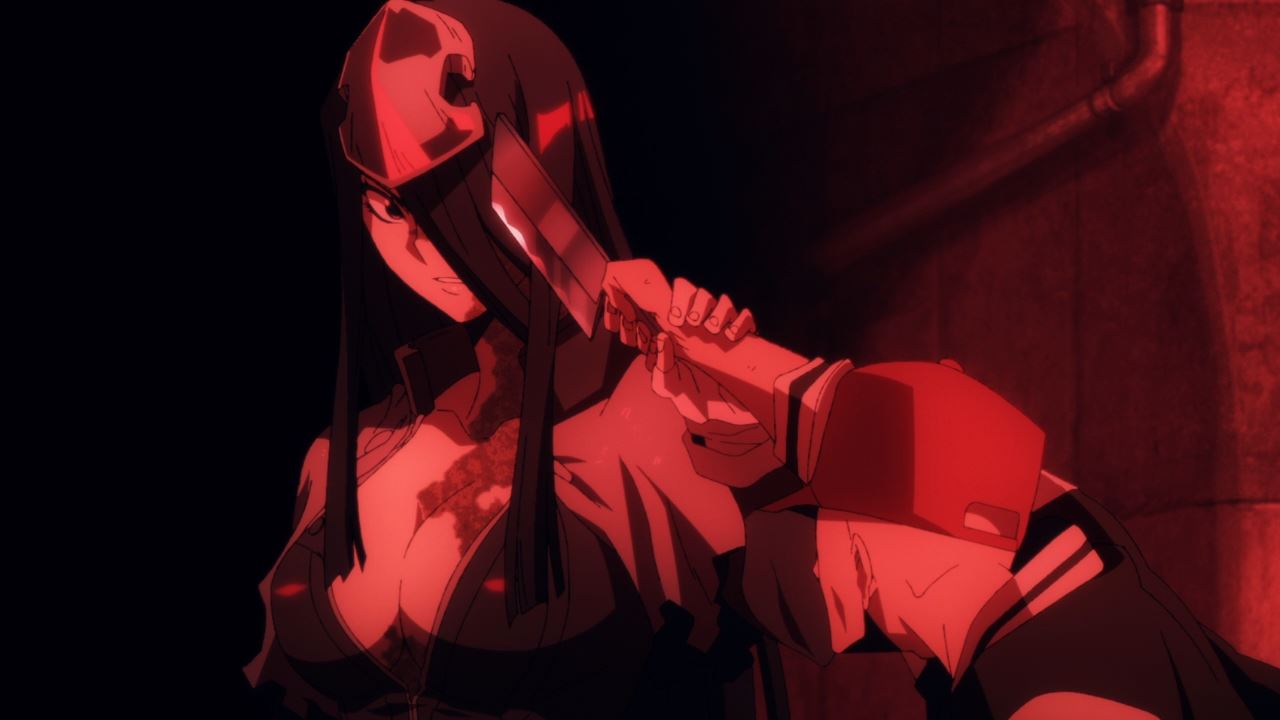 Turns out that the old couple are actually criminals where they kill unsuspected visitors and turn them into mummies. Really horrifying stuff coming from those two. 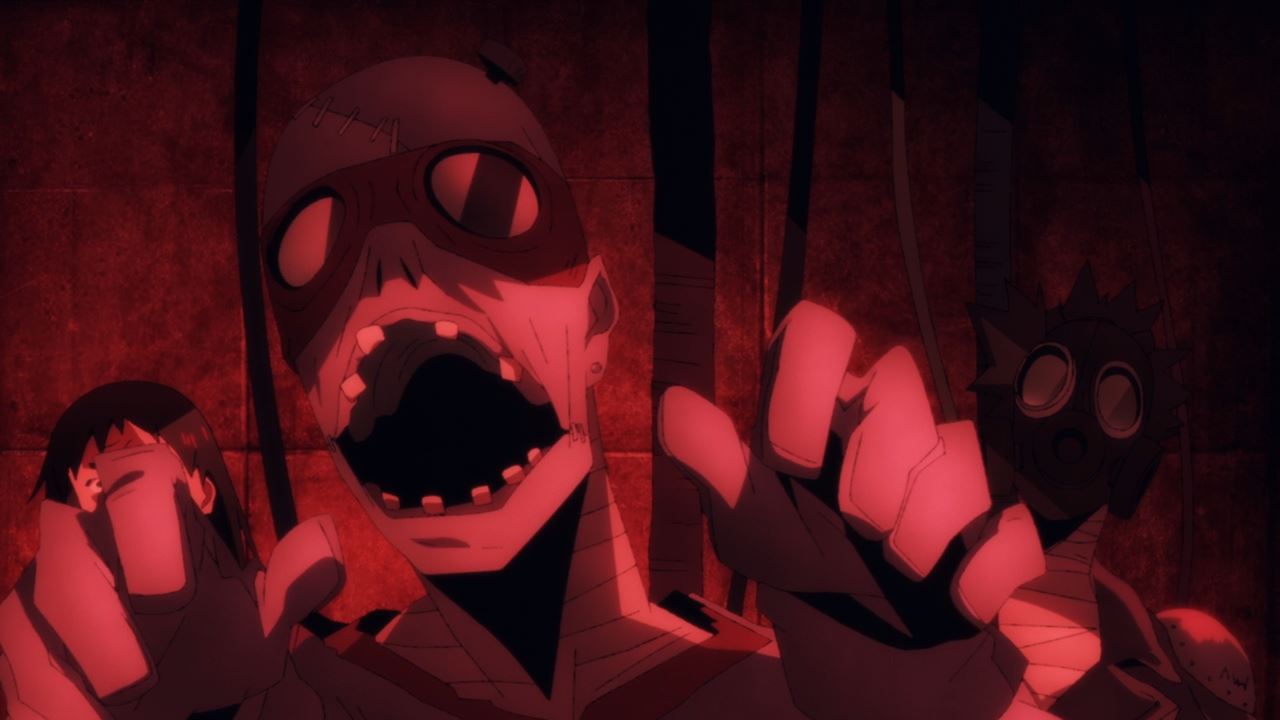 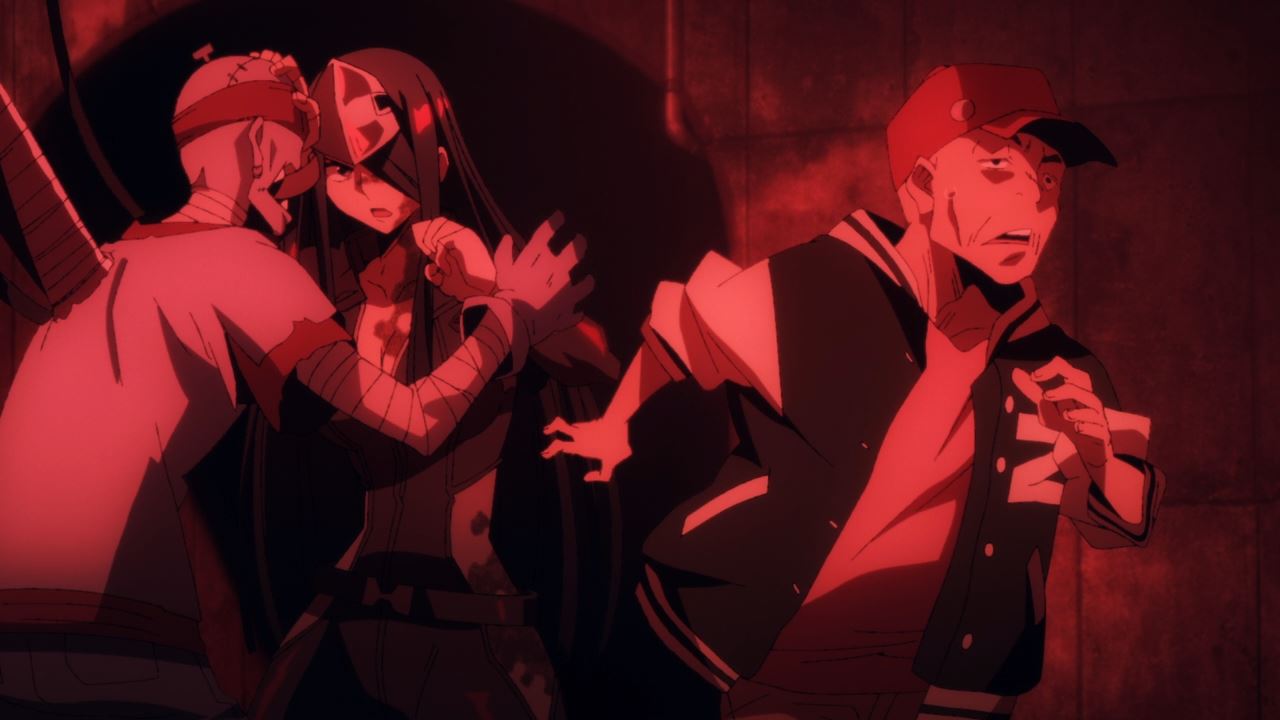 Oh yeah, looks like one of them sent a mummy to distract Pawoo. I guess the couple don’t want to get arrested by the Imihama Watch. 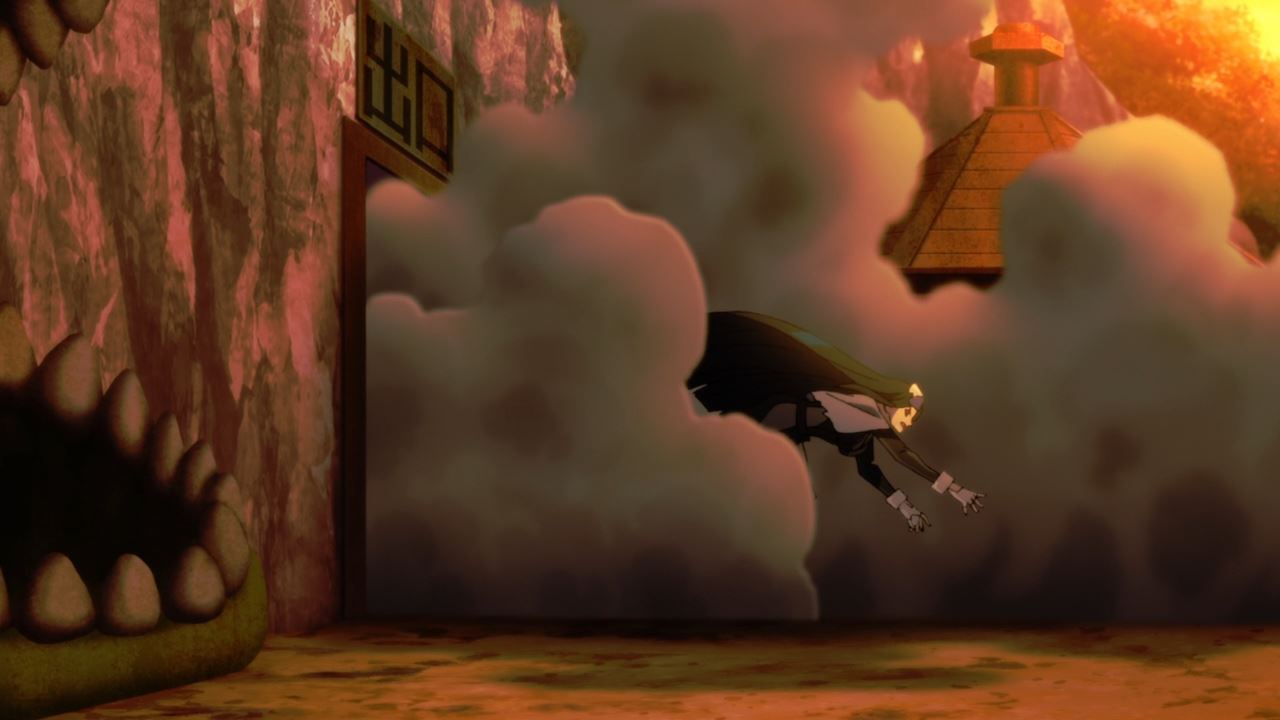 One last thing, they decided to blow the entire facility along with Pawoo, although she managed to get out of the compound quickly. 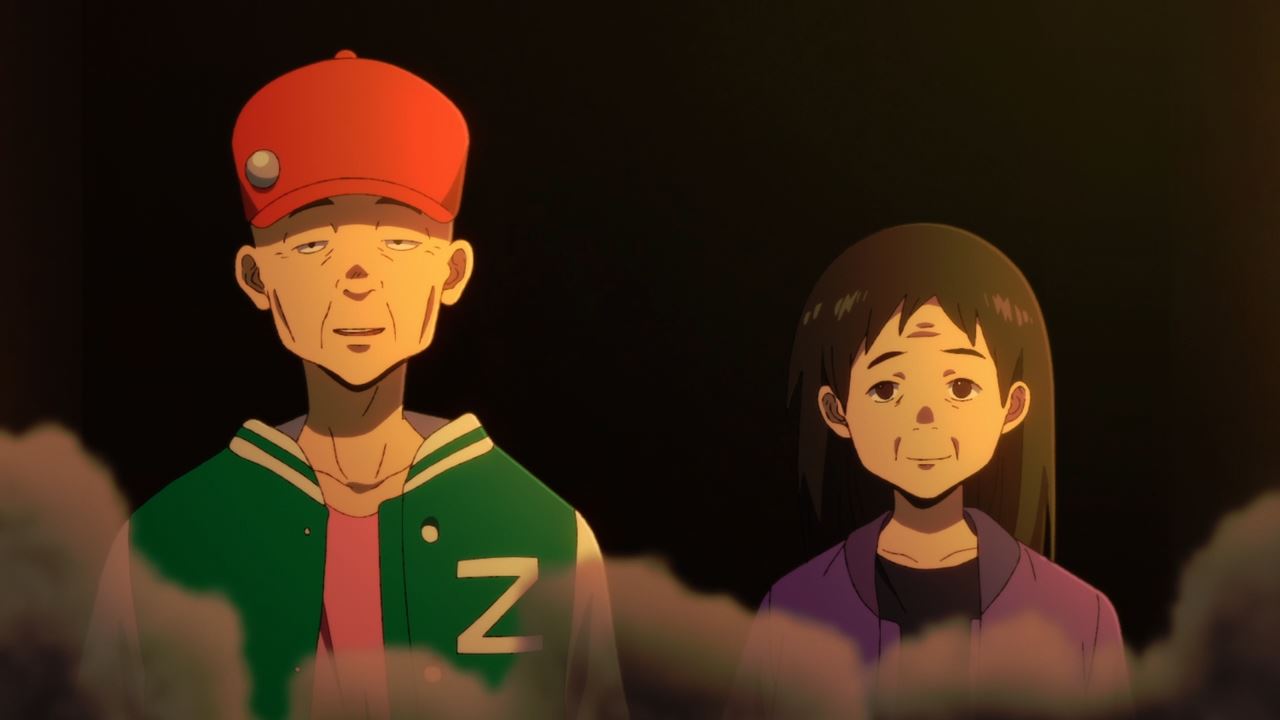 But as for the old couple, they decided to call it quits by blowing themselves up rather than escaping to another town. Wait, are they trying to take down Pawoo with them? 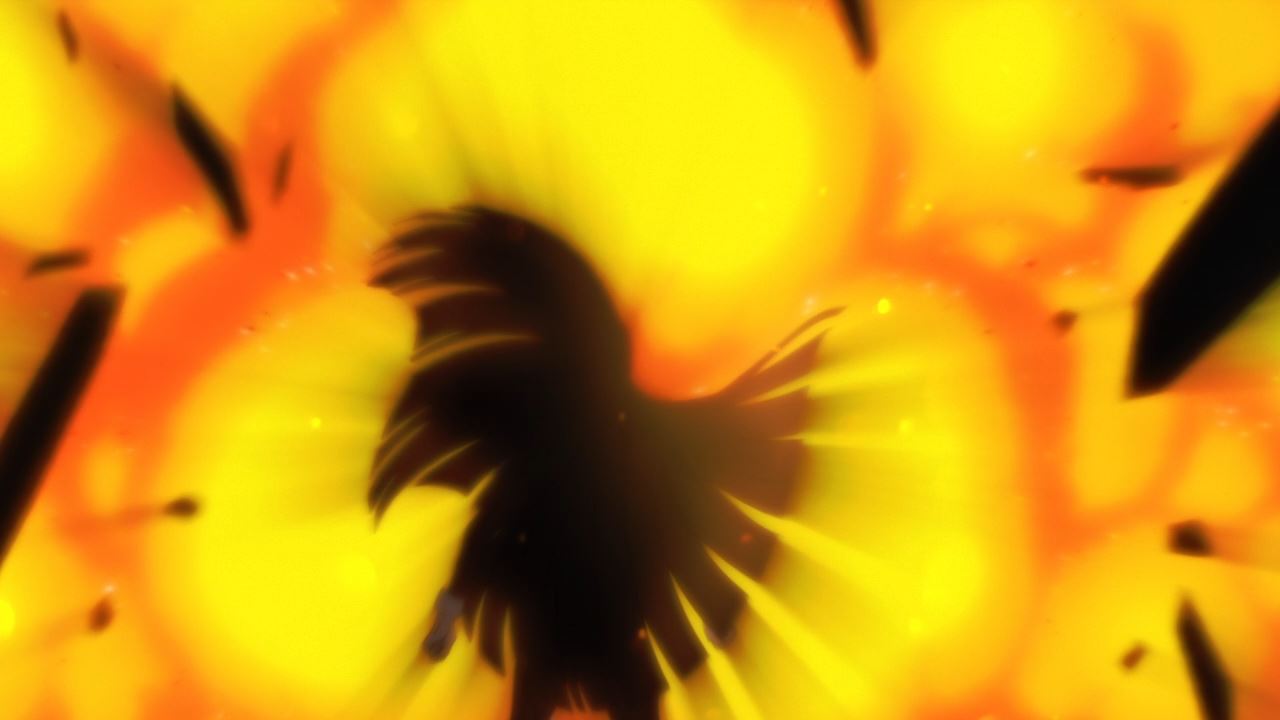 With that said, the old couple died as they blow the entire compound. Of course, I’m worried about Pawoo Nekoyanagi as she might die… unless she’s tough as nails despite being afflicted by the rust. 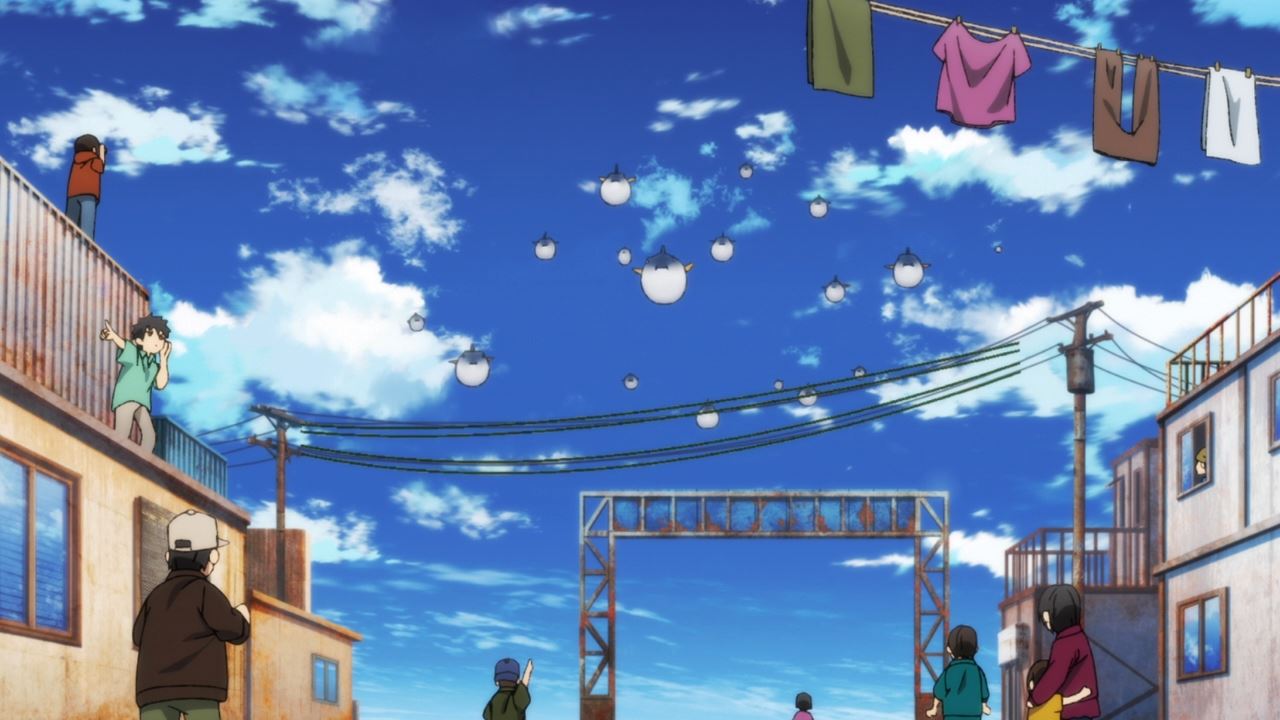 Now let’s return to Tetsujin Town where the children are horrified to see a school of flying blowfish terrorizing their place. 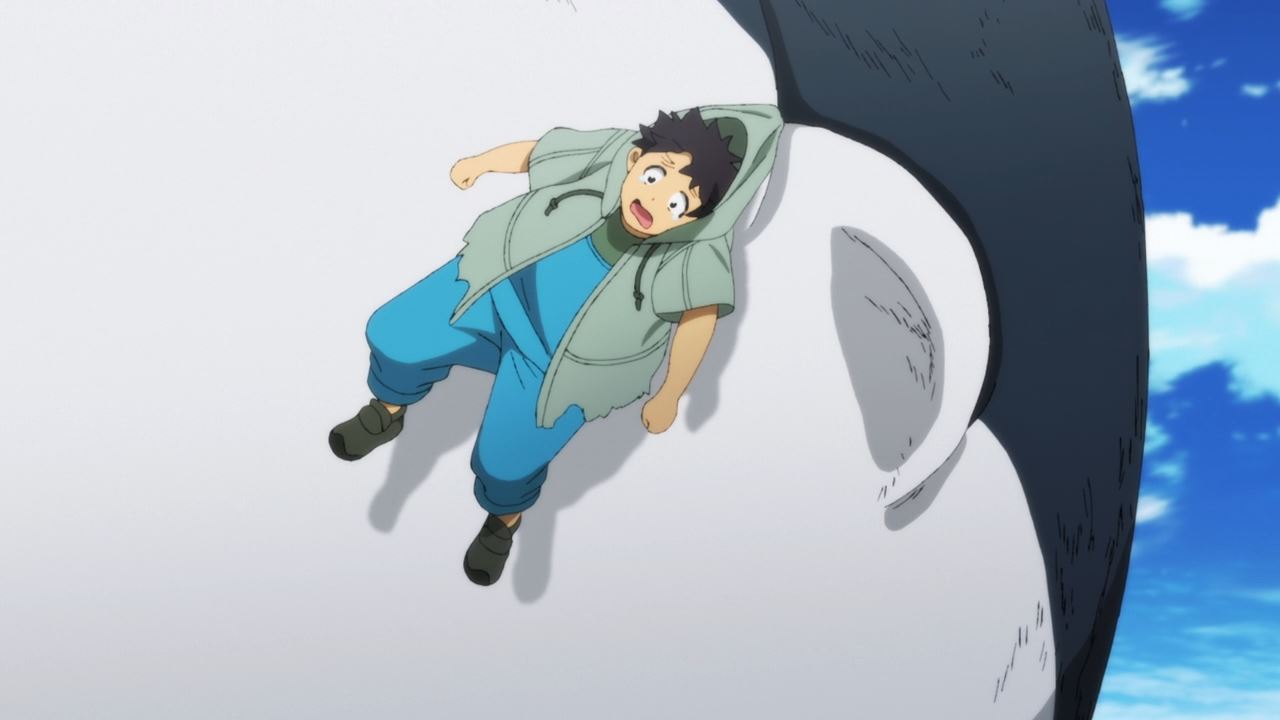 Oh yeah, and it gets worse when one of the kids named Kousuke was captured by a blowfish. I’m really scared that he’ll be eaten for sure. 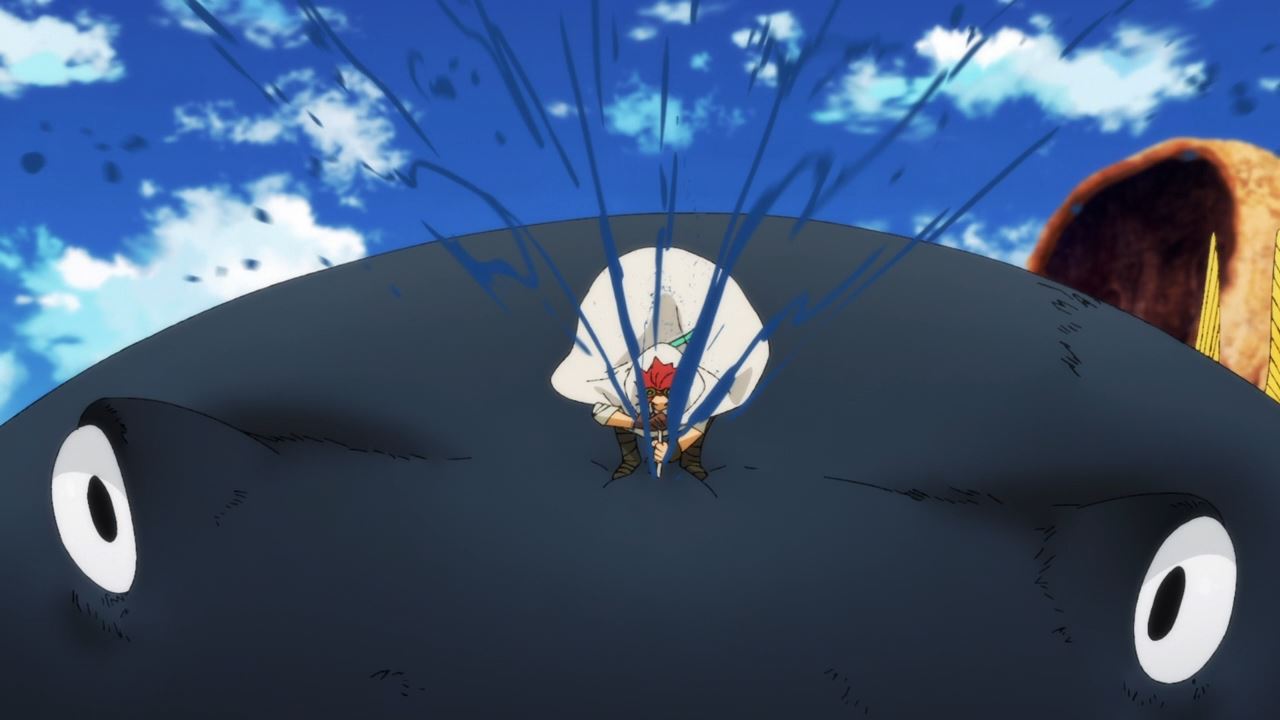 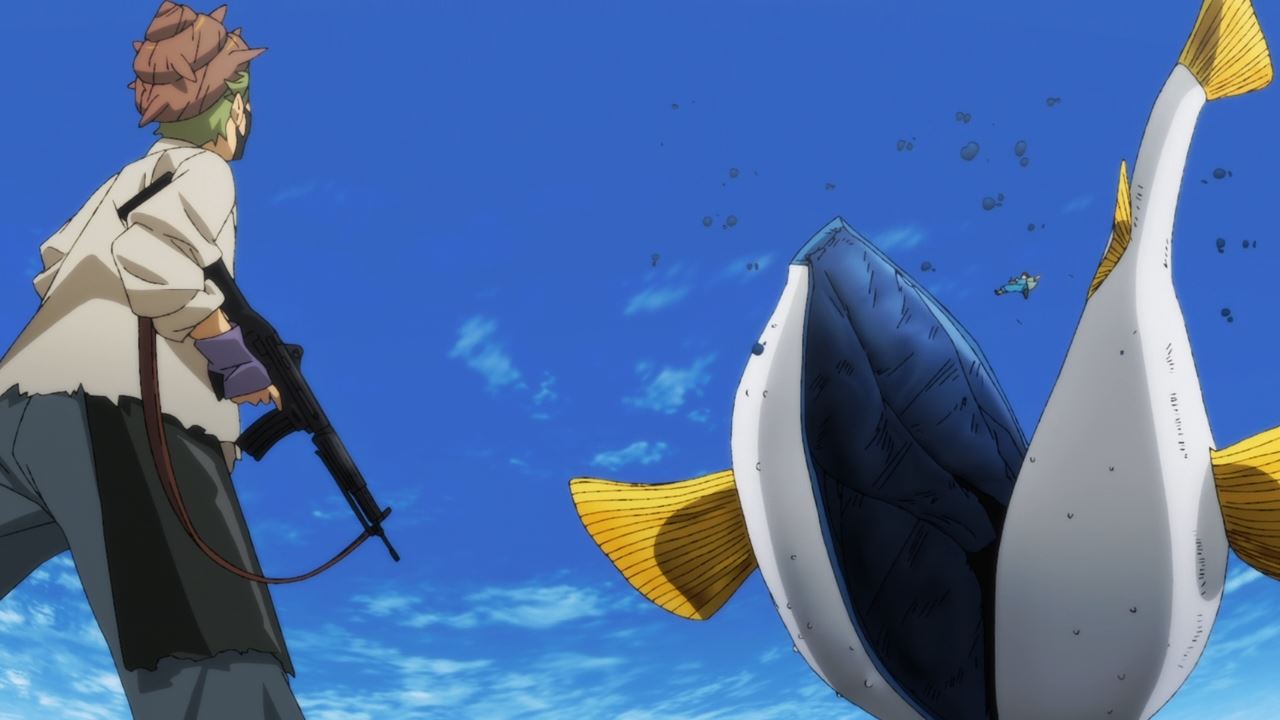 Fortunately, Bisco Akaboshi has arrived to saved the day where he broke out of prison and used a harpoon to cut this blowfish in half. I told you that a harpoon is useful against large sea creatures. 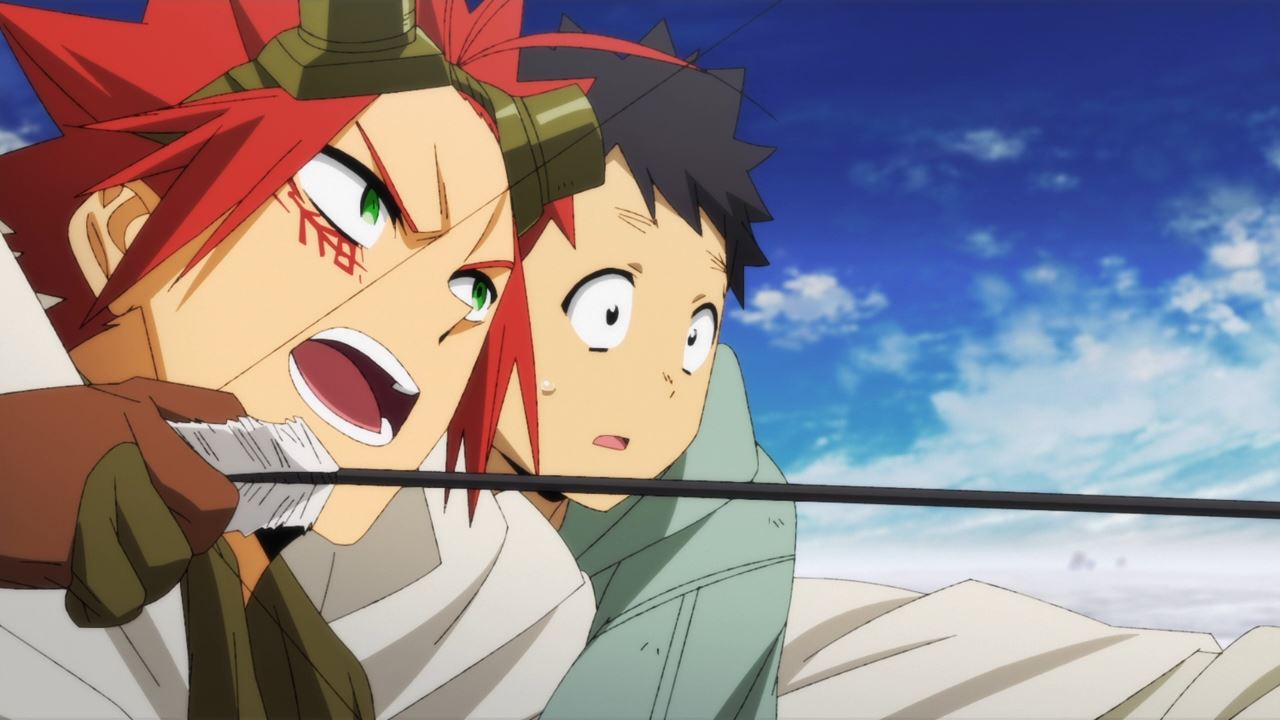 Also, he managed to rescue Kousuke from becoming a fodder to the blowfish. Of course, the blowfish threat is still there as the kids have ran out of ammunition for their guns. 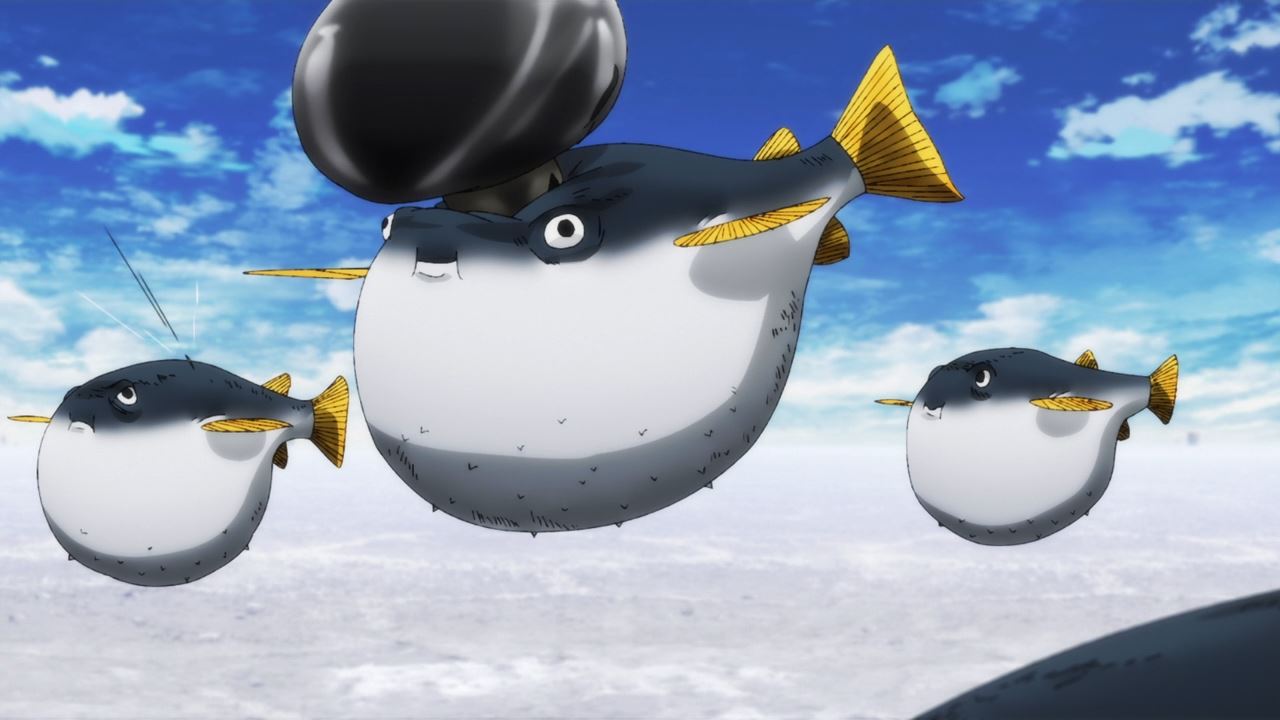 Luckily, Bisco will have to take down a school of flying blowfish using his trusty bow and arrow. But anyways, looks like the blowfish threat has been taken care by the Mushroom Keeper himself. 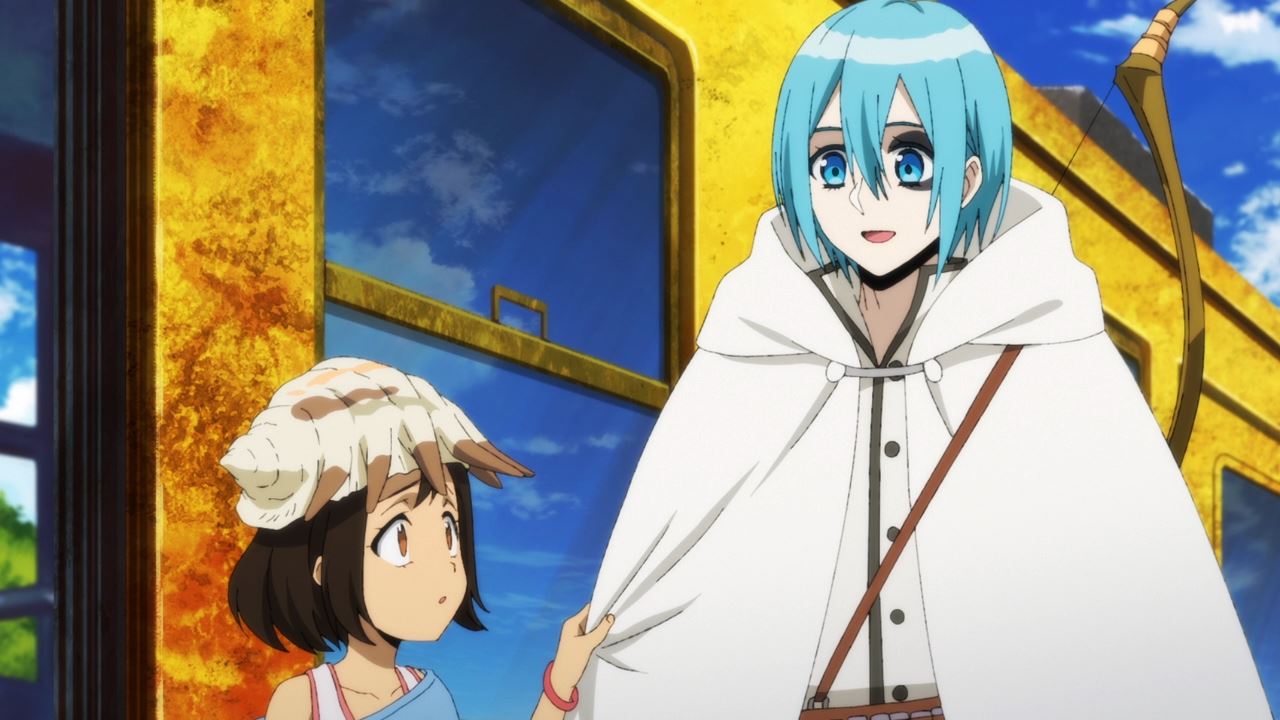 Sadly, both Bisco and Milo will have to leave Tetsujin Town as they continue their journey to find the elusive Rust-Eater mushroom.

Then again, I wish Milo Nekoyanagi will leave the recipe so that the kids can make their own Shellskin cures. 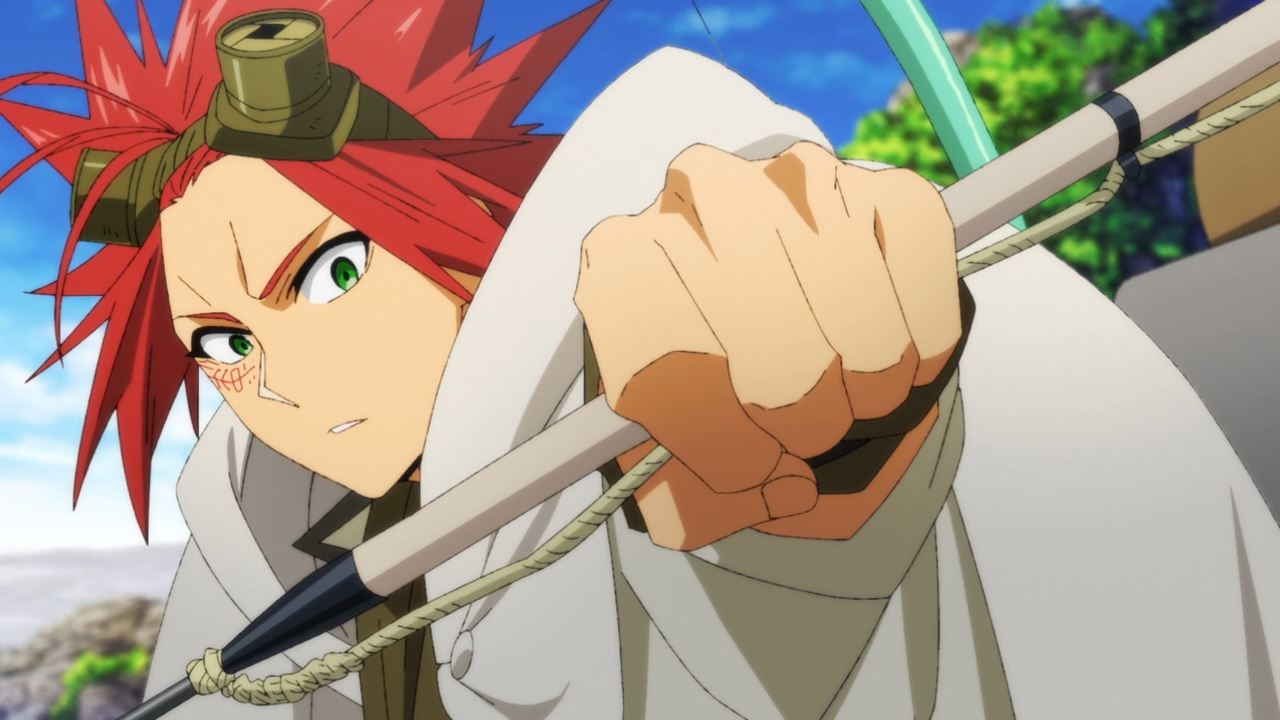 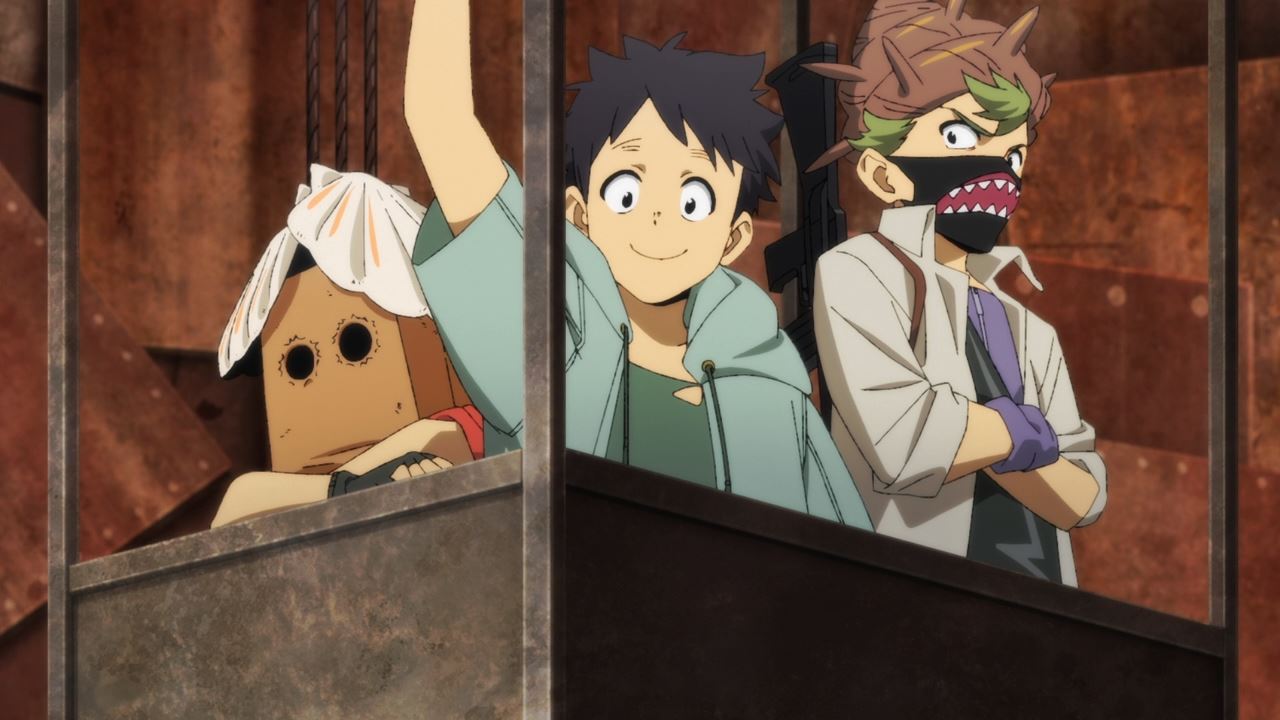 Meanwhile, looks like Bisco Akaboshi received a harpoon from Nuts, although the kid doesn’t want to help the terrorist at first.

Oh c’mon Nuts, you have to be honest with your feelings instead of acting cold towards Bisco, especially when he saved your town from the blowfish menace. 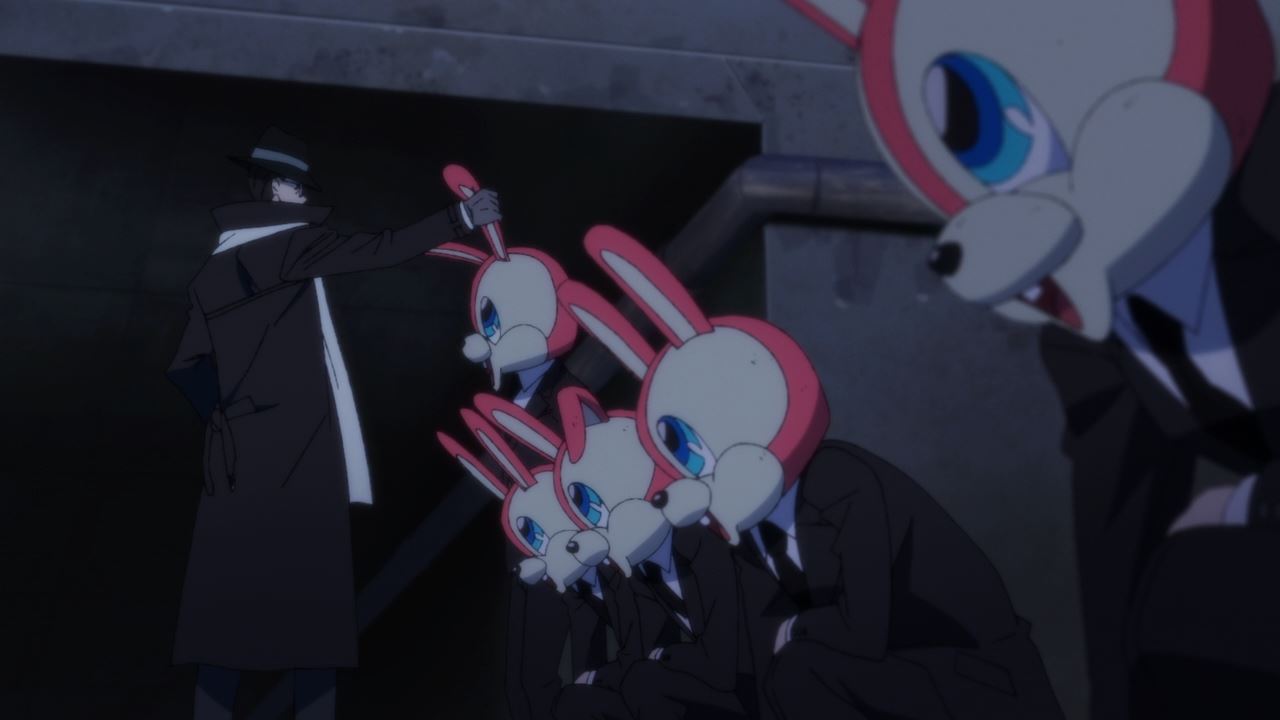 One last thing, let’s return to Imihama Prefecture where Governor Kurokawa noticed that one of his elite soldiers is acting strange. Oh boy, there’s an impostor among them! 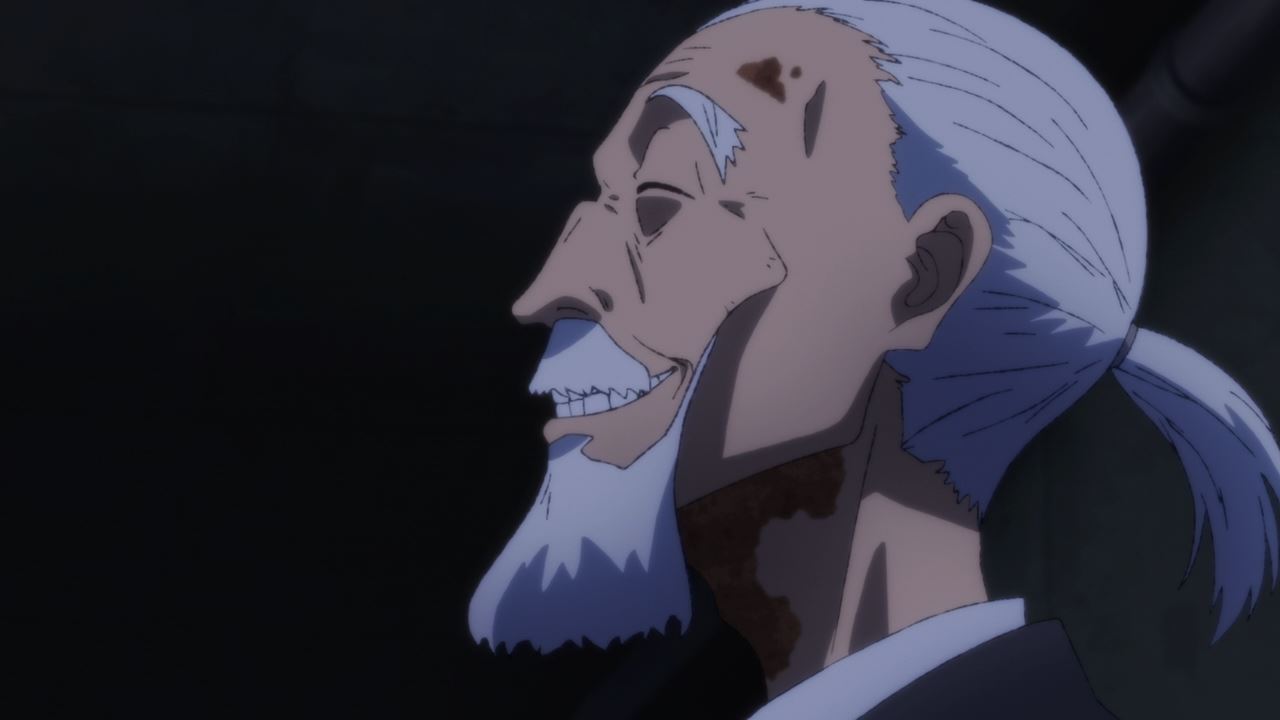 Turns out, it’s Jabi-san where he failed to blend in with the crowd. God, I’m scared that Jabi might get killed.

Well then, tune in next time where Bisco and Milo are heading to their next destination.