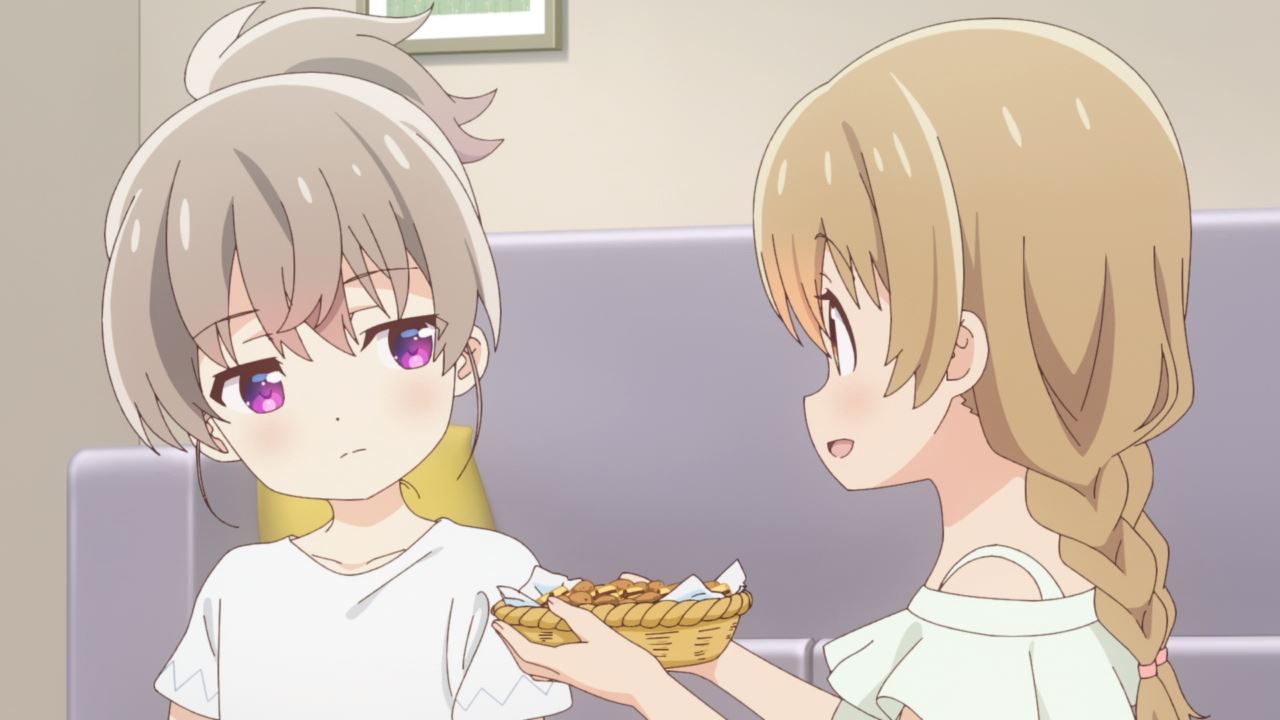 OMG Koharu-chan, you’re mostly fluent in English! Of course, I feel that Koharu Minagi is emitting the same energy as Cocoa Hotto.

Anyways, they have to finish their homework ’cause Koharu and her friends will visit an amusement park. 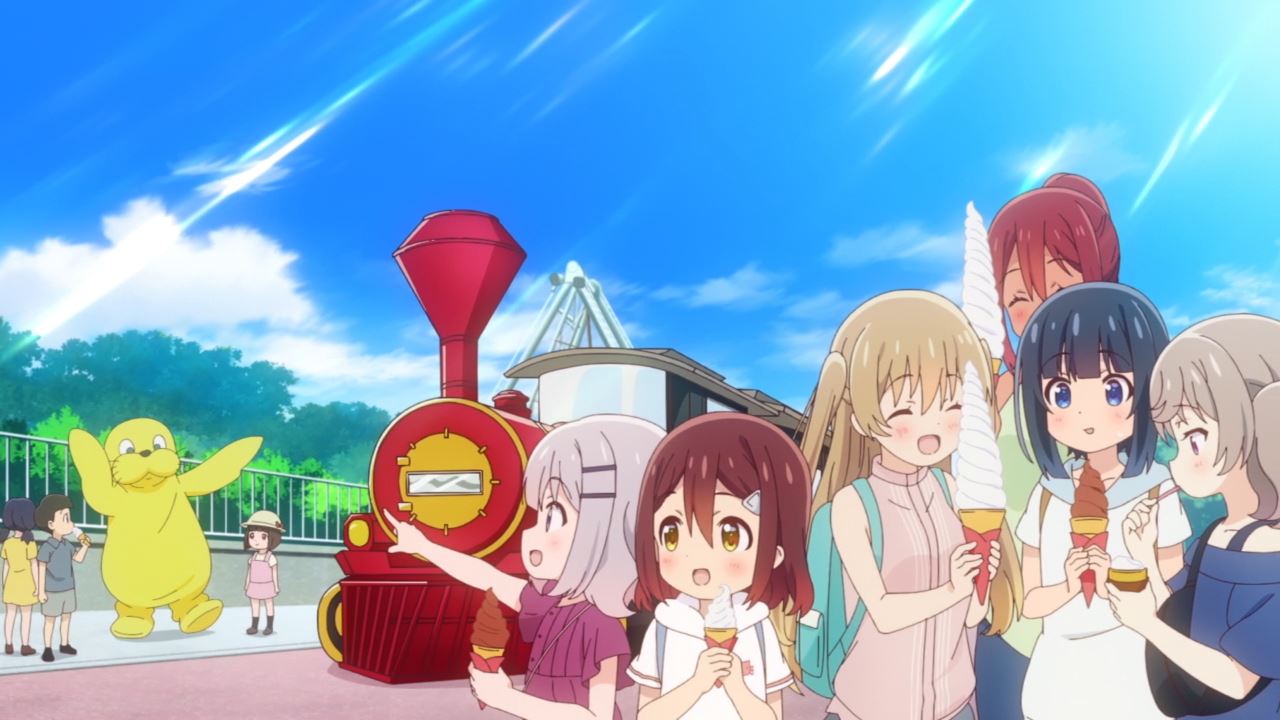 With that said, it’s time to visit the amusement park where Koharu and Hiyori Minagi, the Fukumoto sisters, and Koi Yoshinaga are here to enjoy themselves.

Oh yeah, I forgot to mention that Futaba brought her friend Aiko as they visit various attractions. More importantly, they want to try a certain attraction… 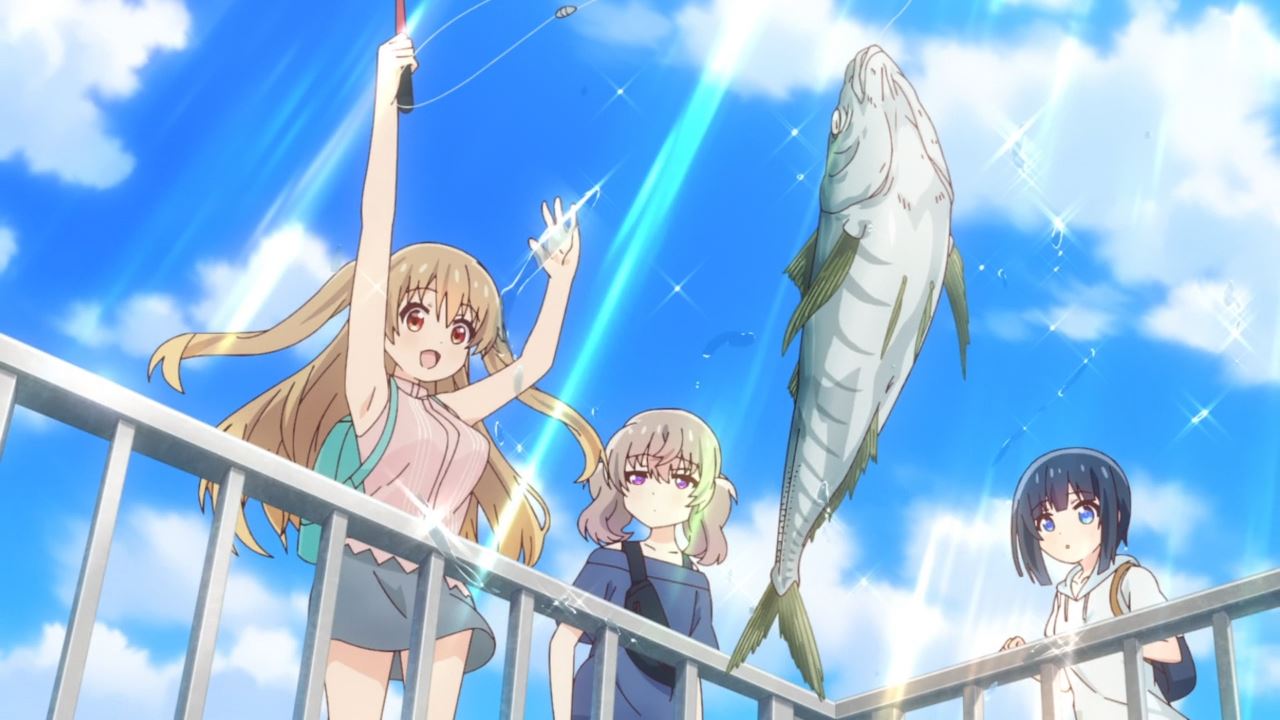 And that’s pond fishing where Hiyori and the rest try their skills to catch a fish. By the way, looks like Koharu is getting better when it comes to fishing. 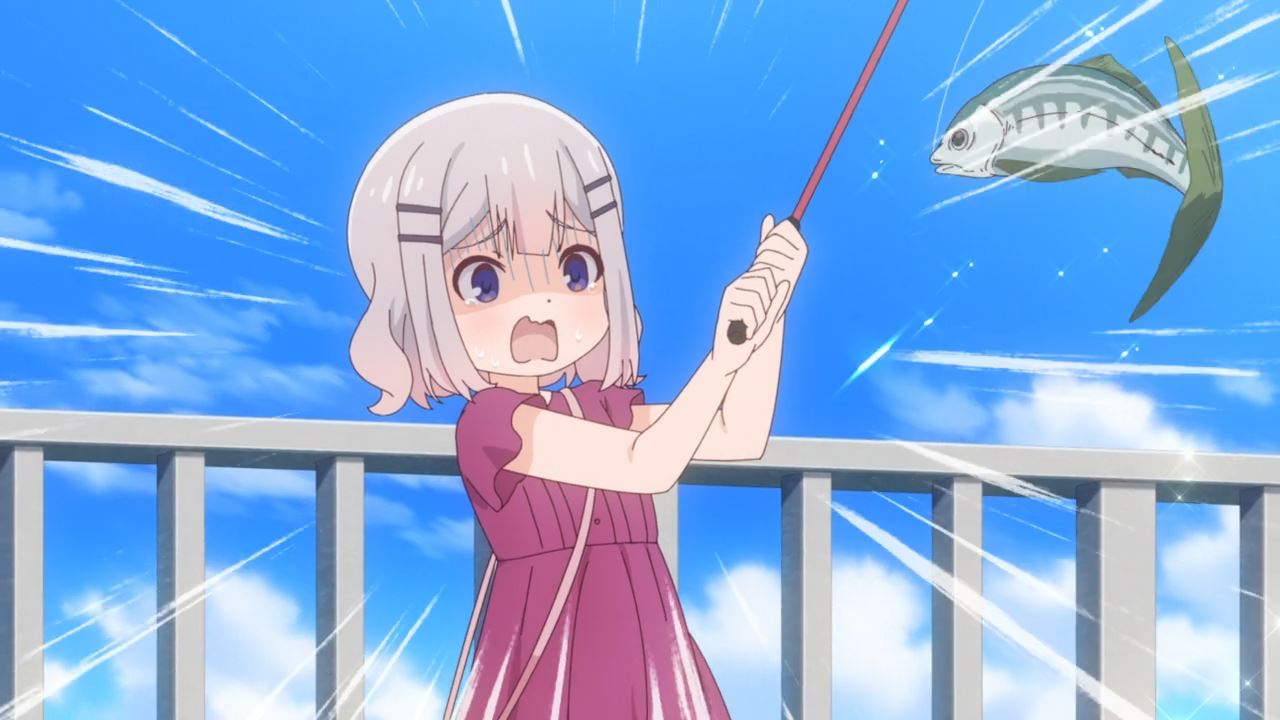 However, it appears that Aiko-chan is really frightened where she can’t handle a live fish after catching it with a rod. 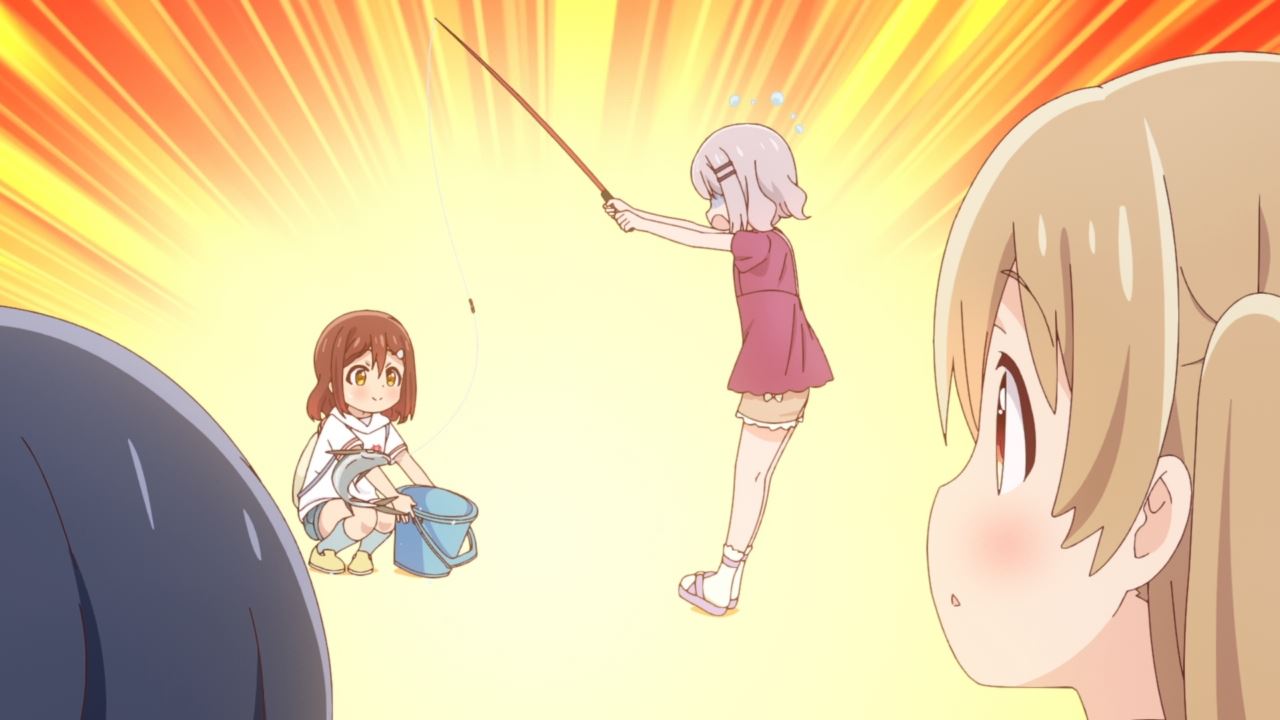 Fortunately, there’s Futaba helping her friend by catching the fish with a net. Of course, I’m curious if Aiko is really grossed-out with her friend’s hobby?

Actually, turns out that she doesn’t felt disgusted as Aiko is really supportive towards Futaba when it comes to fishing. Let’s hope that they’ll remain friends after this. 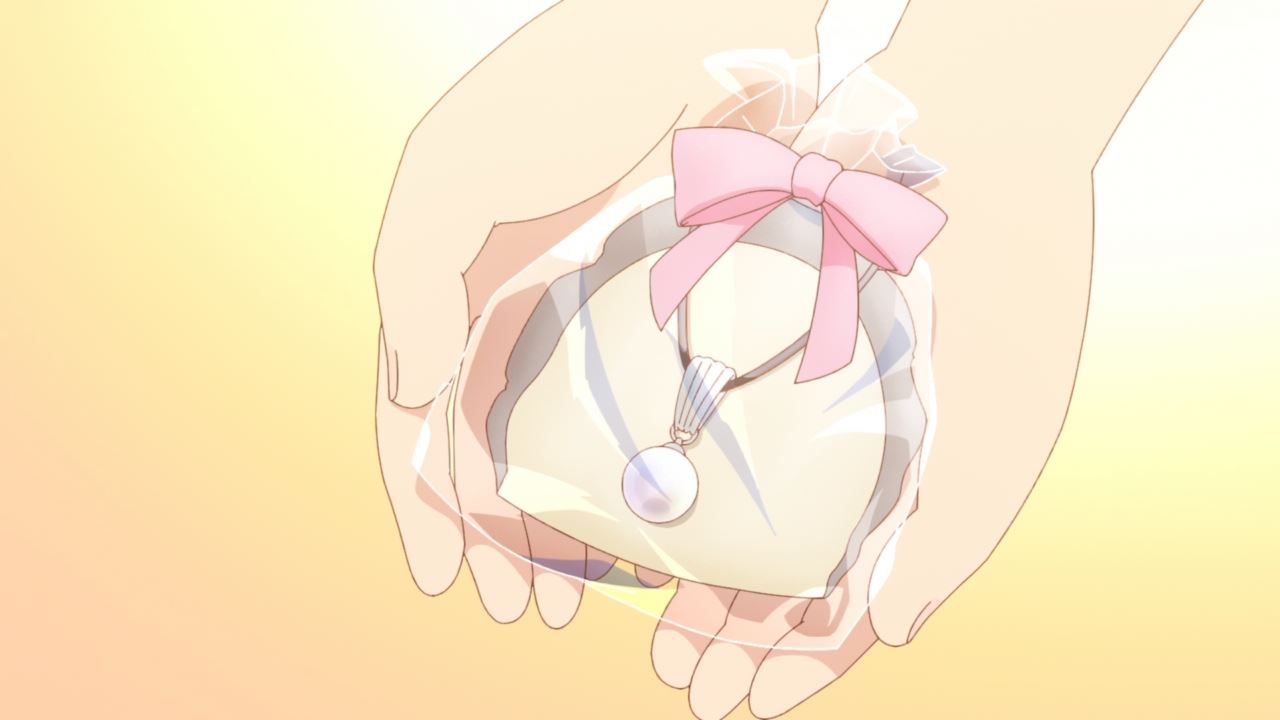 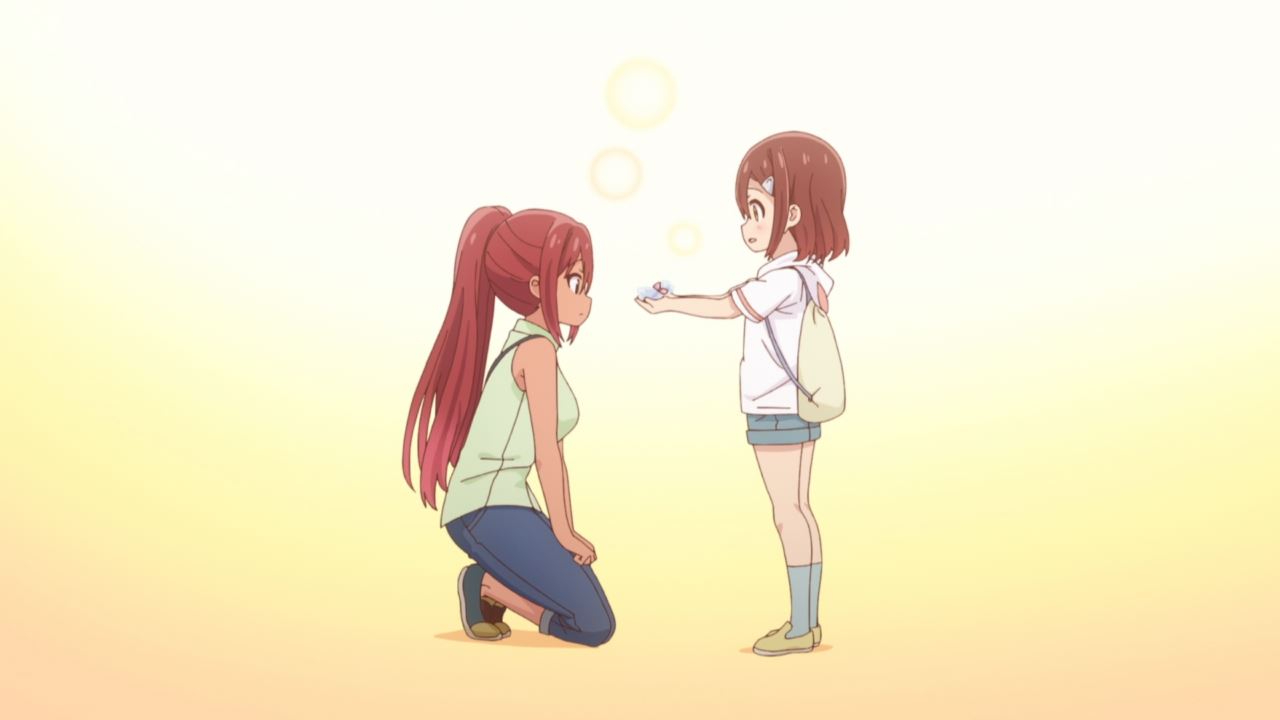 But speaking of Futaba, looks like she gave a special gift to Ichika-san. Isn’t it sweet to cap things off at the amusement park? 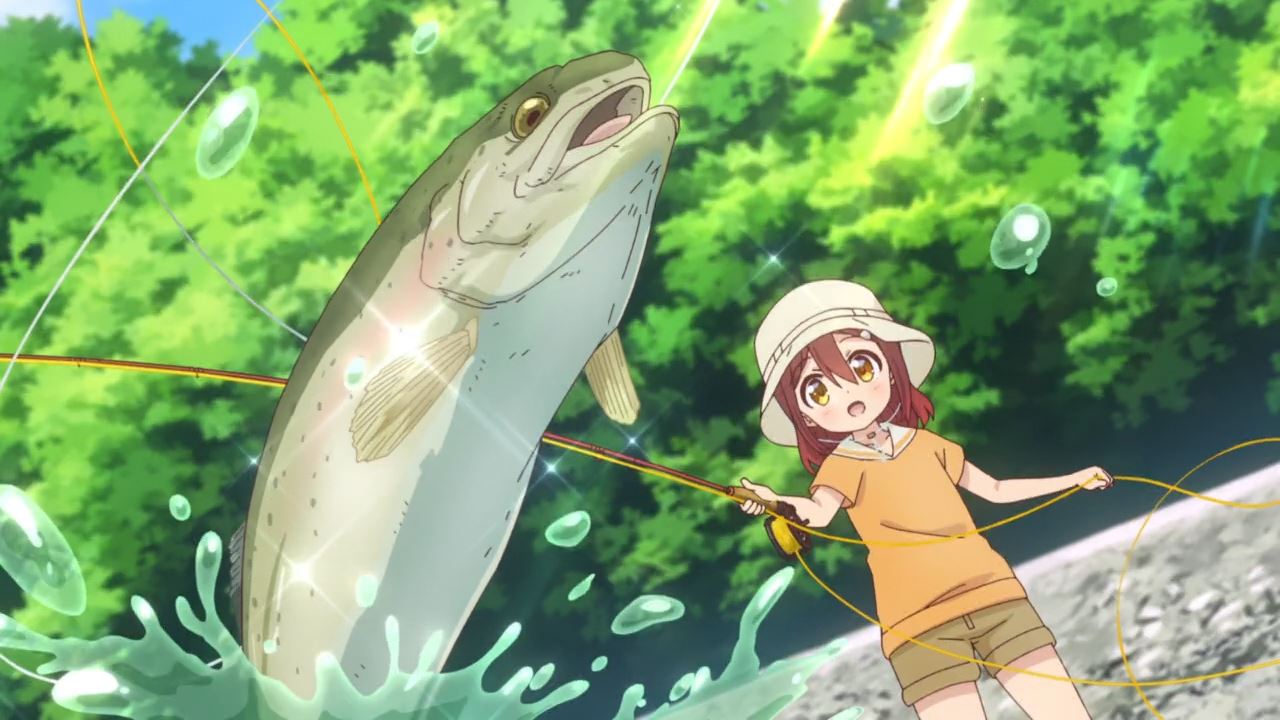 Now then, it’s time for everyone to pay a visit to the lake for some fly fishing. Speaking of Futaba Fukumoto, she got the hang of using an artificial fly to catch some fish. 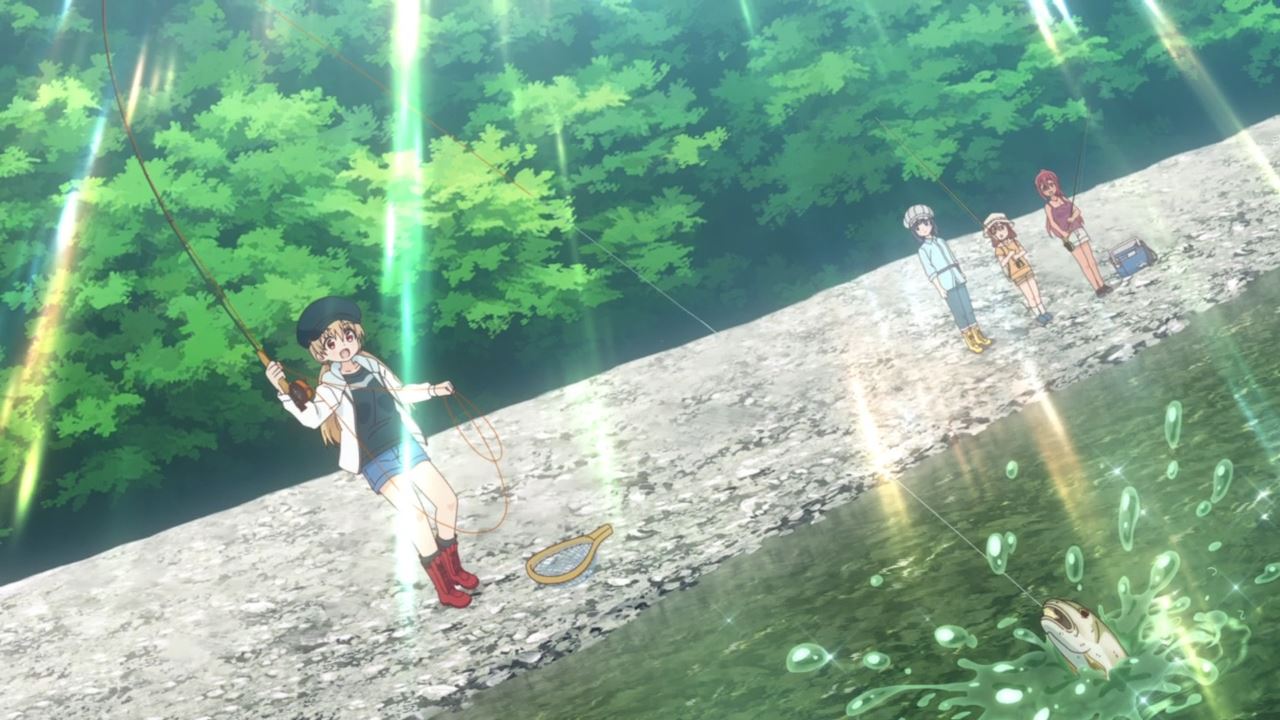 Anyways, let’s move onto Koharu Minagi where she tries to catch one fish at the lake. Will she succeed much like in the previous episode? 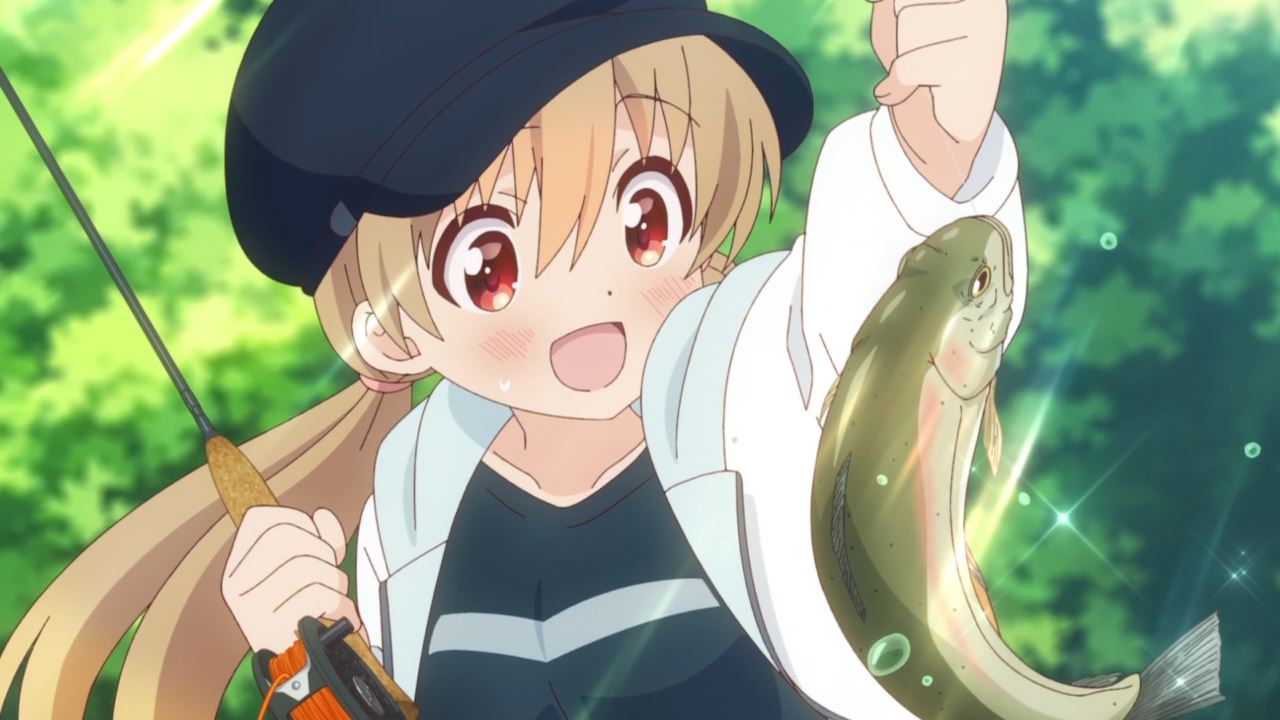 Well, Koharu did it as she caught a rainbow trout. Of course, she’s not gonna release it at the pond as Koharu has some plans for it. 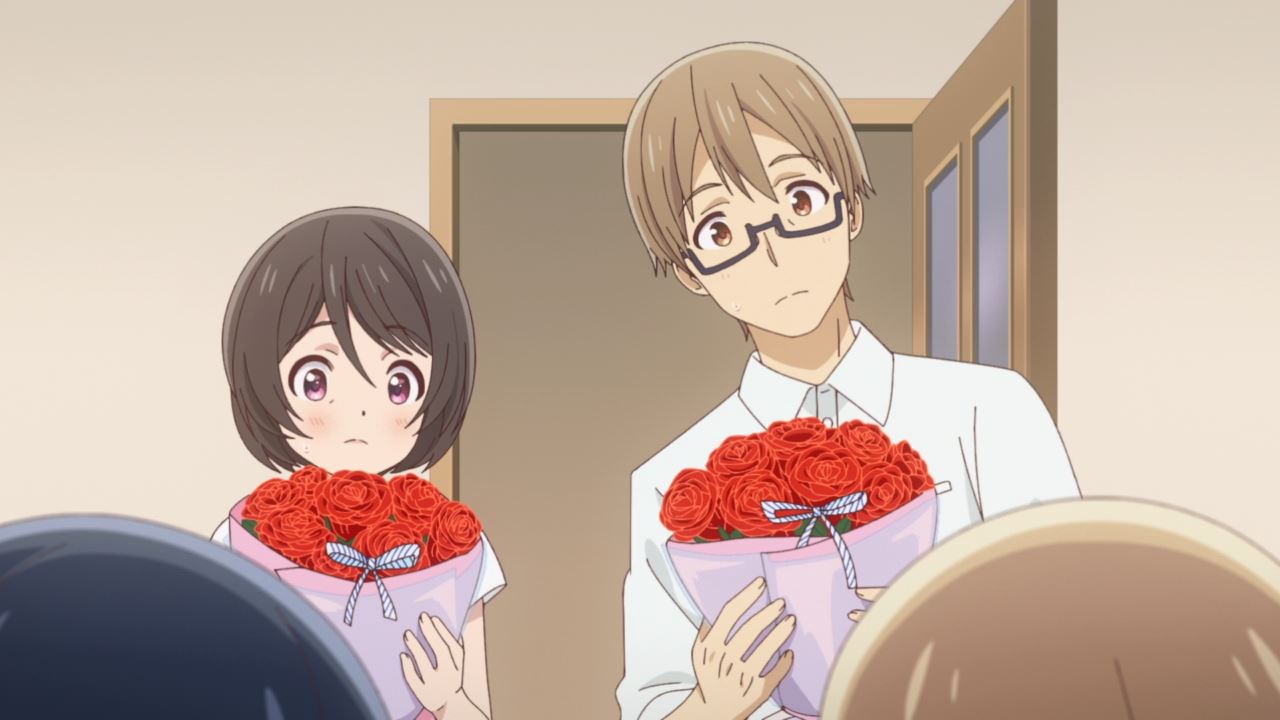 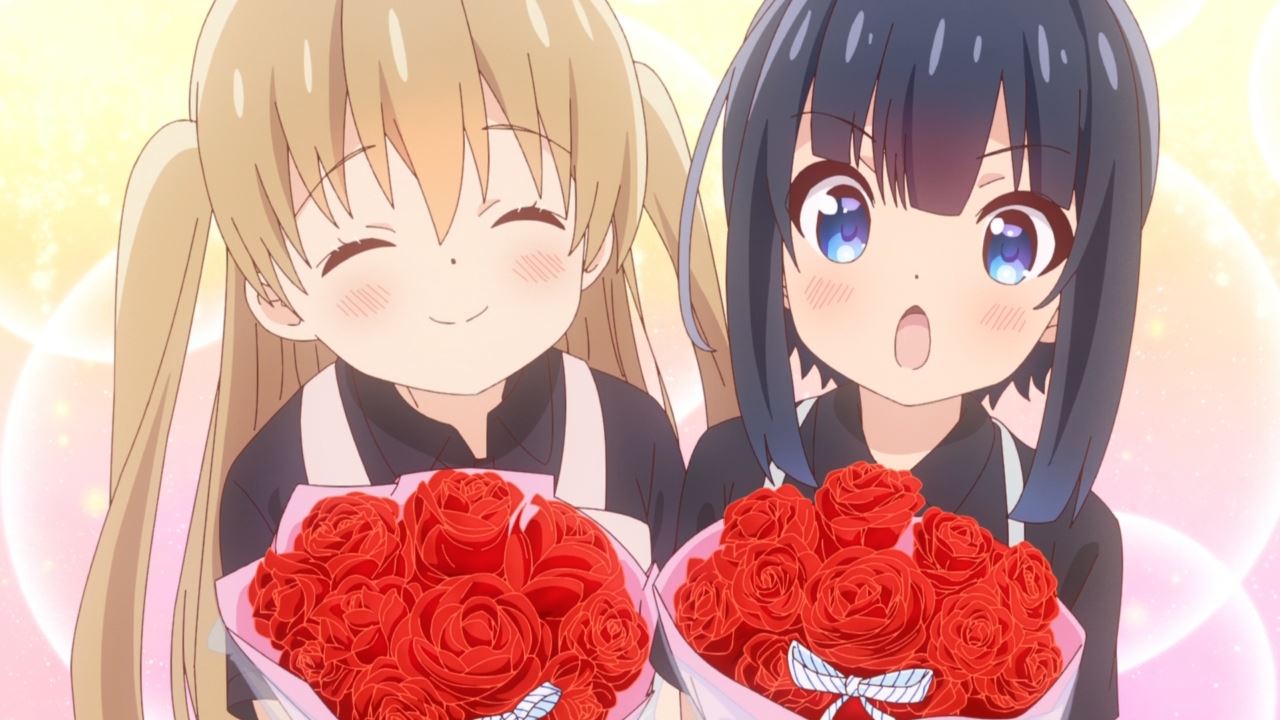 Now let’s return to the Minagi residence where Koharu and Hiyori offered a bouquet of roses to their parents.

C’mon, both Hinata-san and Issei-san haven’t celebrated their wedding yet, so this is the time for their daughters to prepare a party for them. 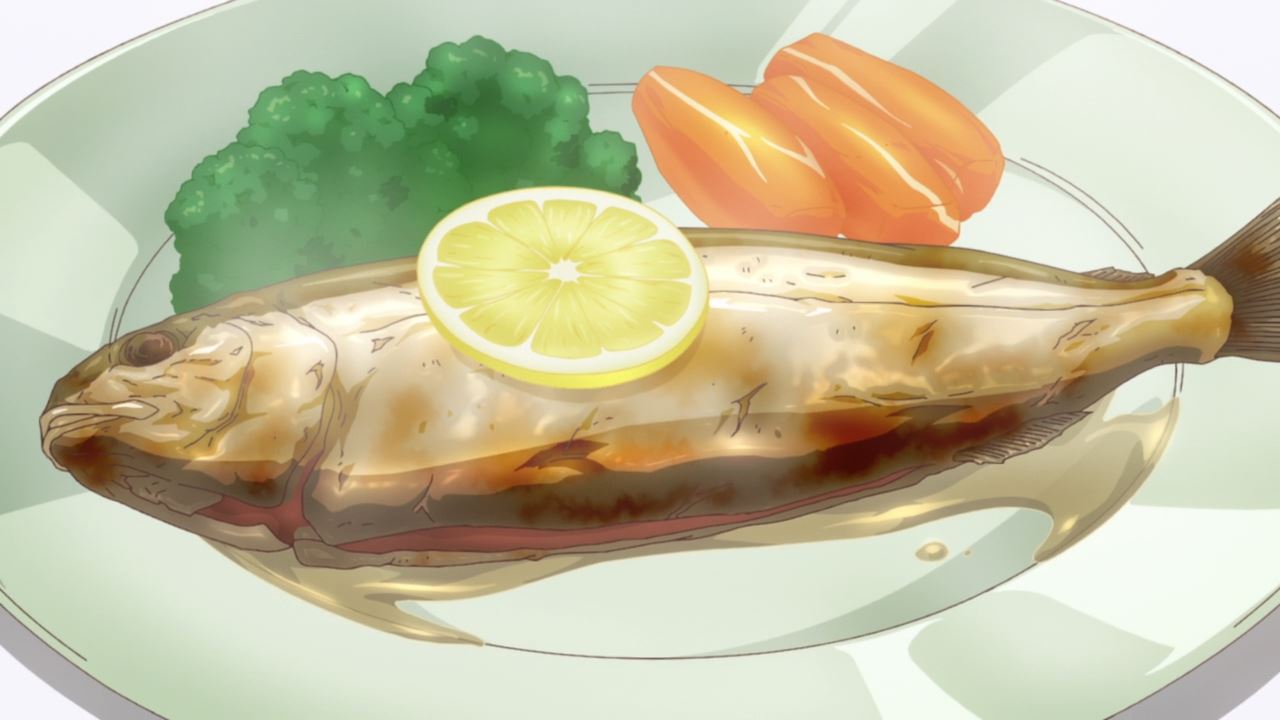 Anyways, Koharu came up with the main dish called rainbow trout meunière where she cooked the freshly-caught fish to perfection. But how’s the taste? 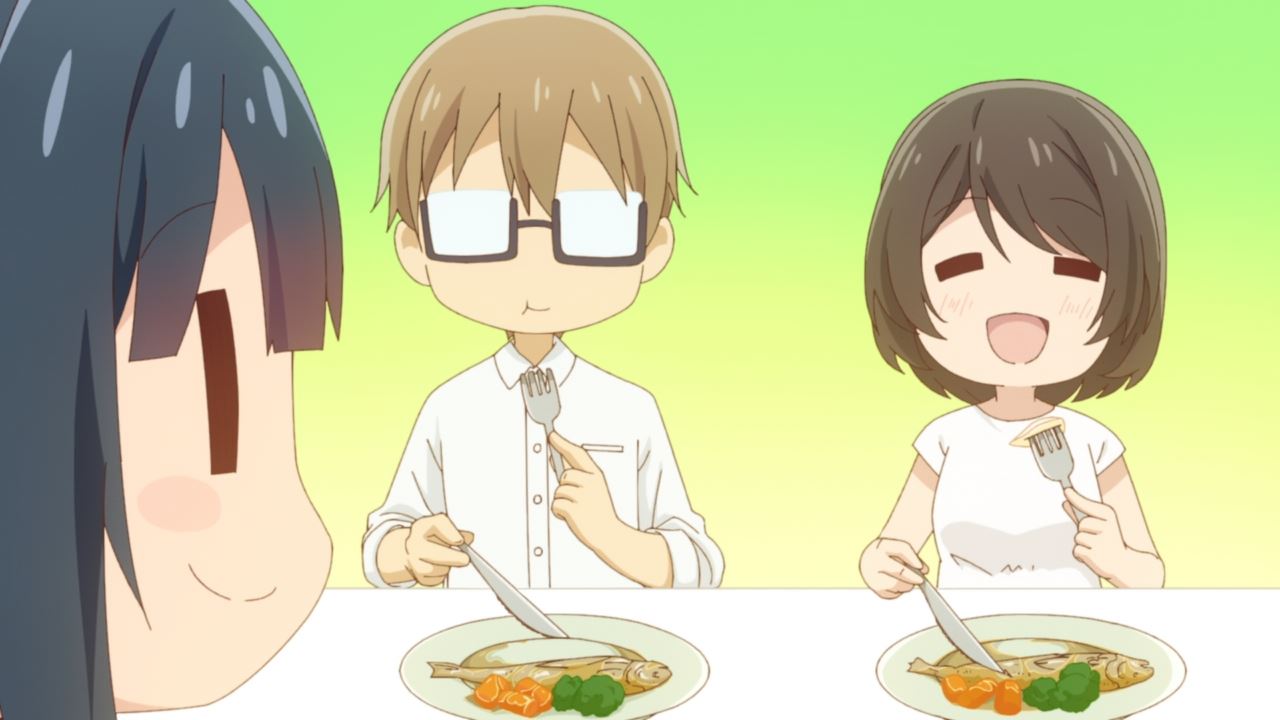 Well, both Hinata-san and Issei-san loved it. Gotta say that they’re happy to see their daughters come up with a wedding party. 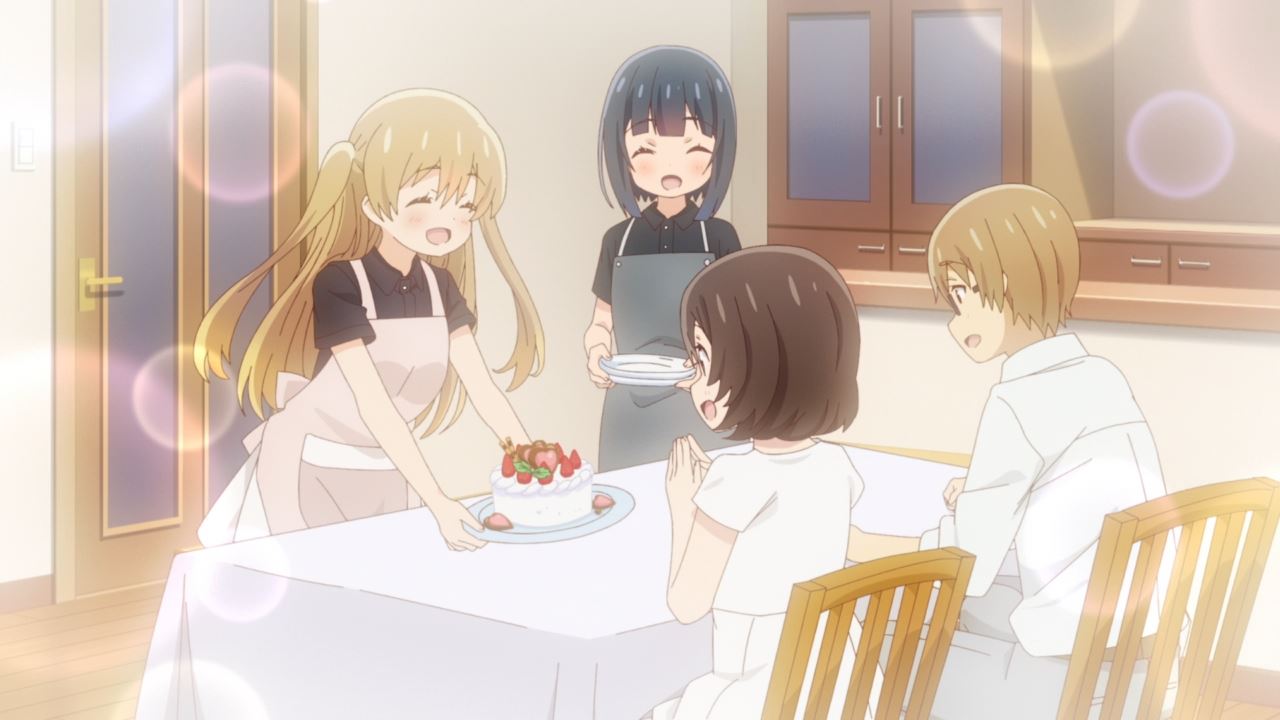 But that’s the end of this episode where Aiko-chan understands Futaba ever since she shared her hobby, as well as letting both Hiyori and Koharu hold a party for their parents. Well then, I’ll see you next time!