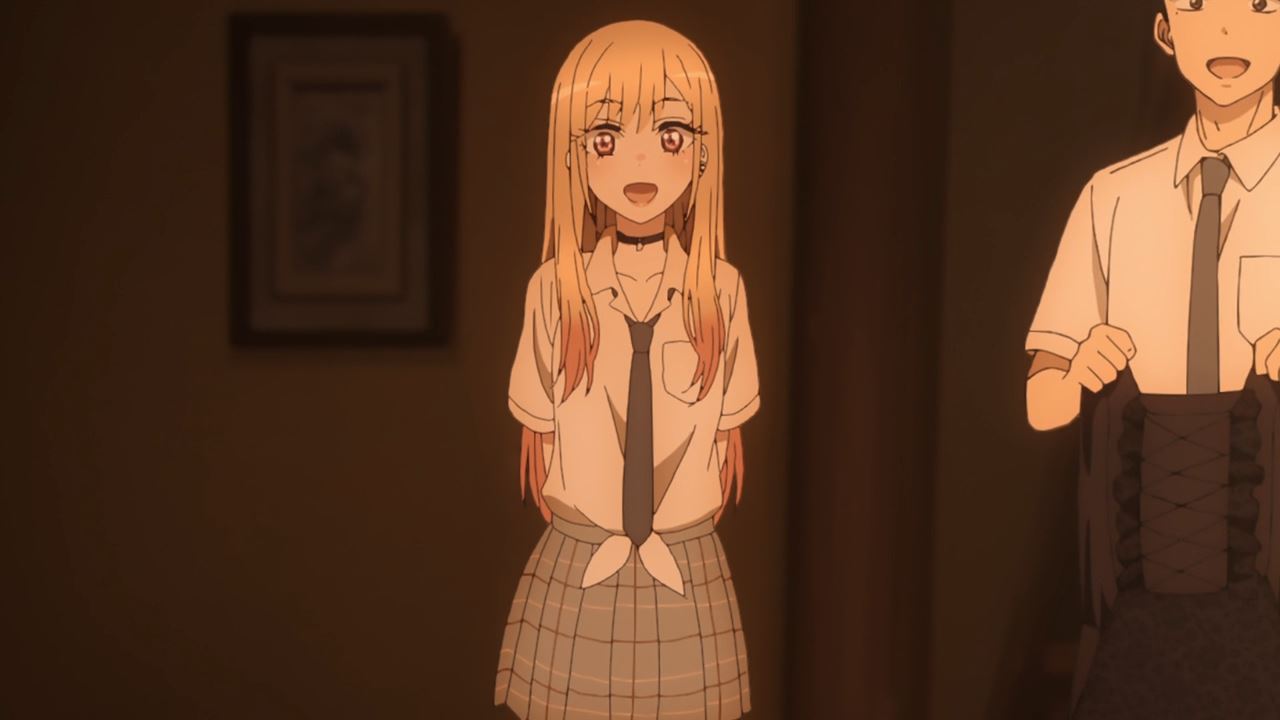 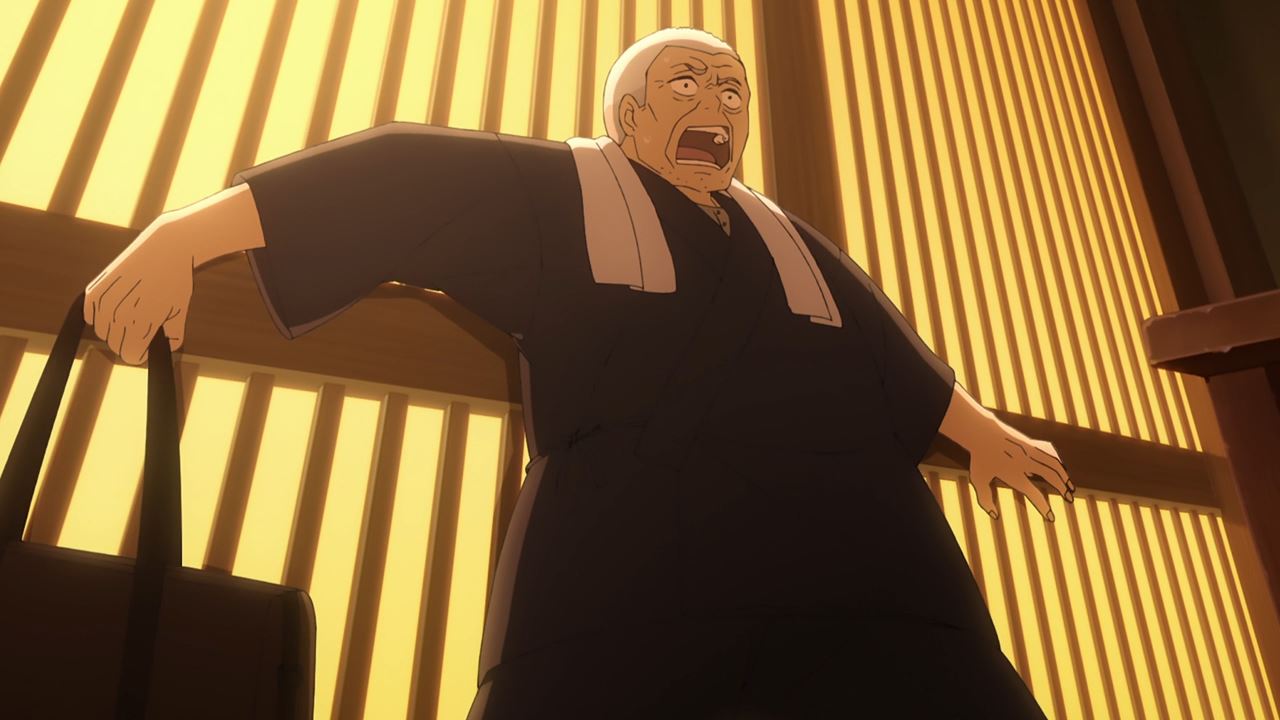 Well then, it appears that Wakana’s grandfather Kaoru was surprised that his grandson brought a smoking-hot babe of a classmate, although Wakana told his gramps that Marin Kitagawa is just her friend… for now at least. 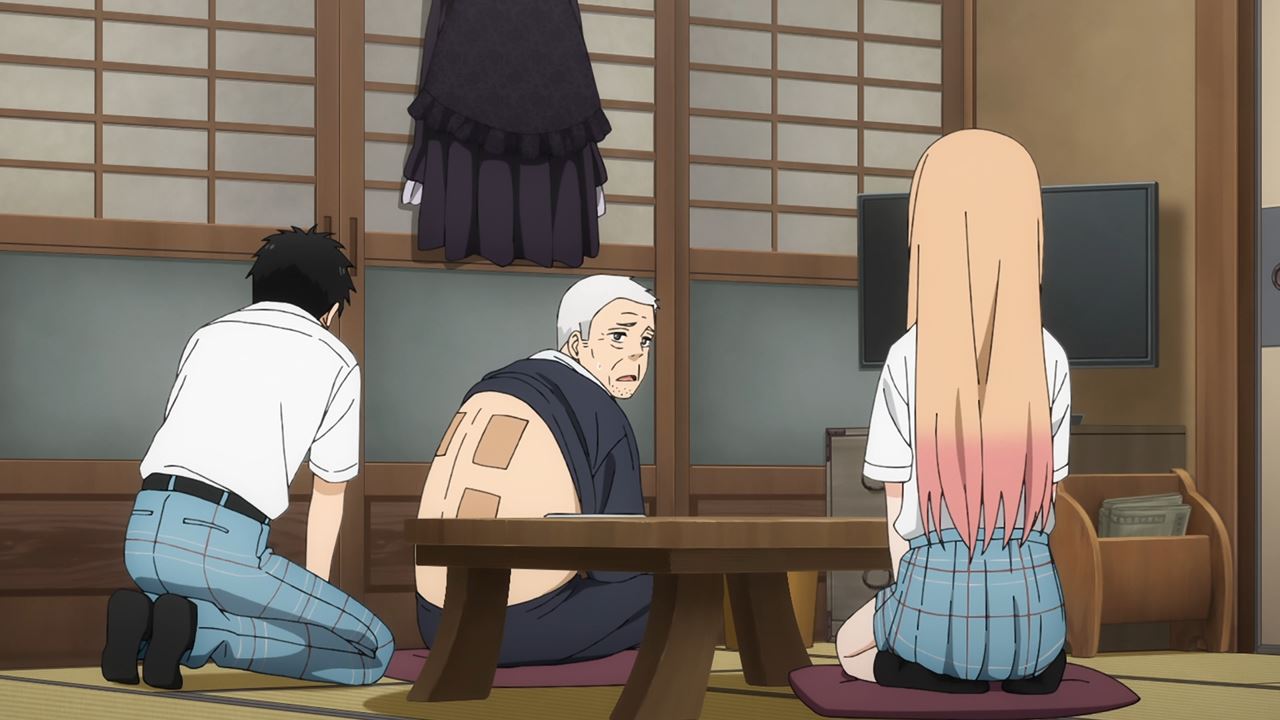 With that said, Kaoru-san apologized over Marin where he’s still shocked that his grandson would bring a classmate to their hina doll shop.

By the way, Kaoru Gojo was impressed towards his grandson over Marin’s costume. And really, it wasn’t a bad start for a guy who makes clothes for hina dolls. 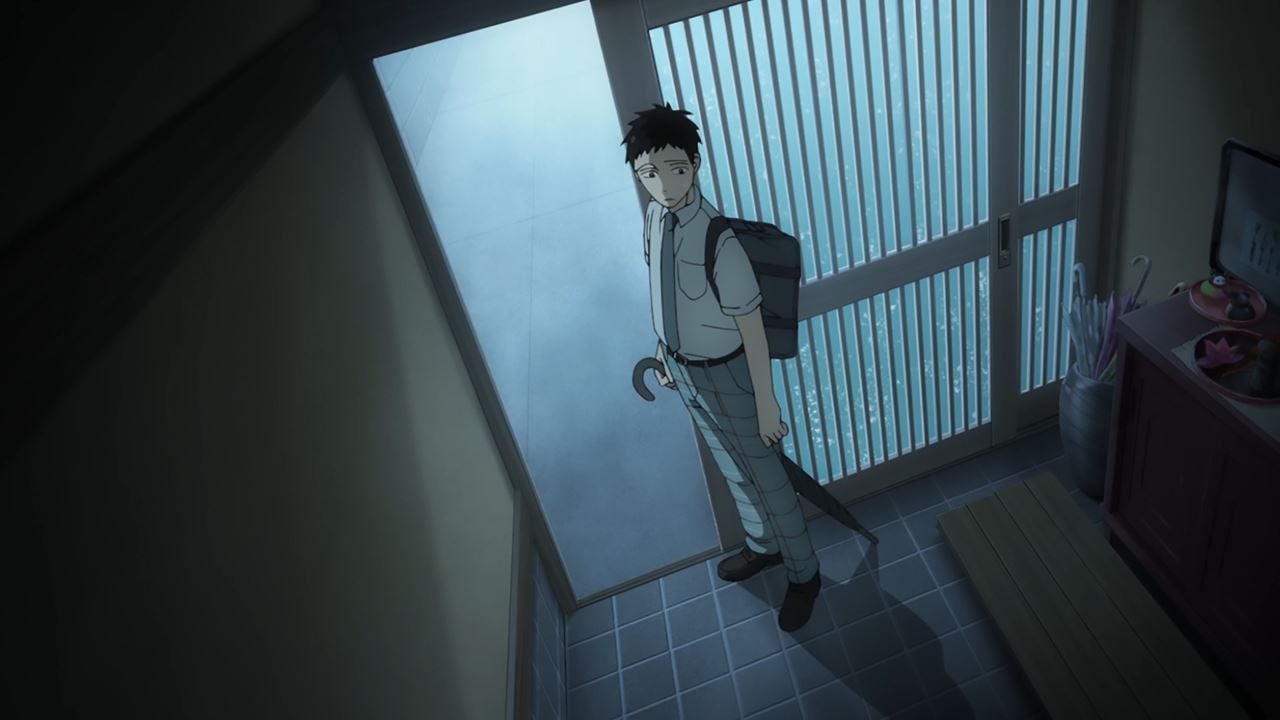 Now then, let’s move onto the next scene where Wakana Gojo noticed something odd inside his home.

In fact, he’s worried that his grandfather let some stranger in during a dark, stormy night. Oh boy, I fear that this stranger stole some money.

Anyways, looks like he has to apologize to Inui-san for accidentally saw her body. It would be bad if Sajuna called the police and arrest him. 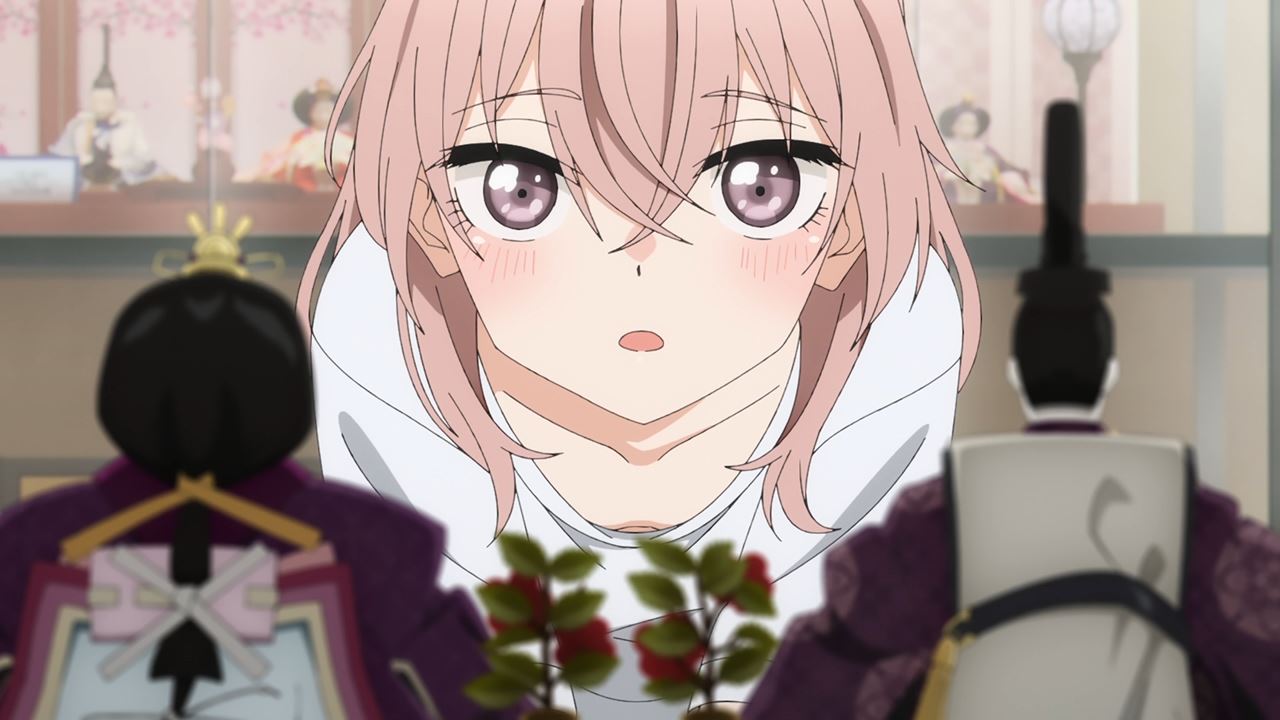 Now then, it’s time for Wakana Gojo to show her the works where he took Sajuna Inui to a gallery of hina dolls. But she’s not here to mesmerize over dolls. 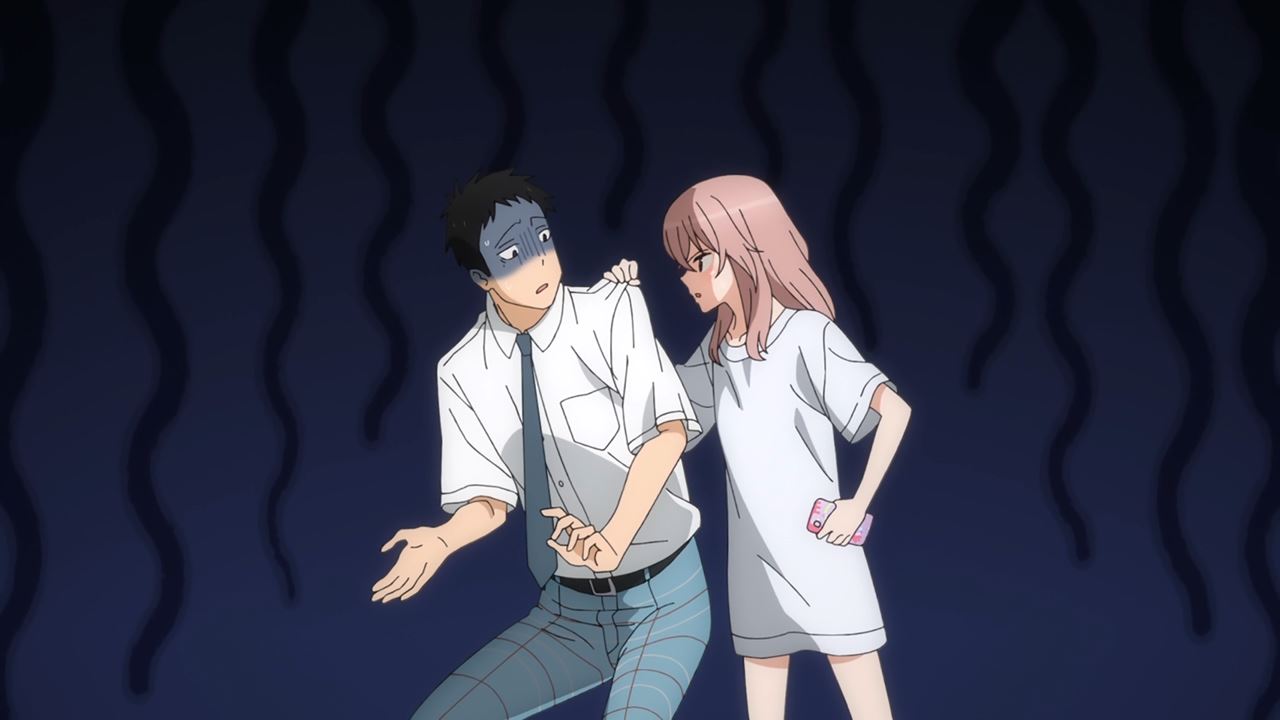 Turns out that Inui-san is here for some custom-made costume as Sajuna heard that there’s one skilled person who made that lovely costume of Shizuku Kuroe.

Yes, she’s referring to Wakana Gojo as Sajuna revealed herself to be the famous cosplayer Juju. 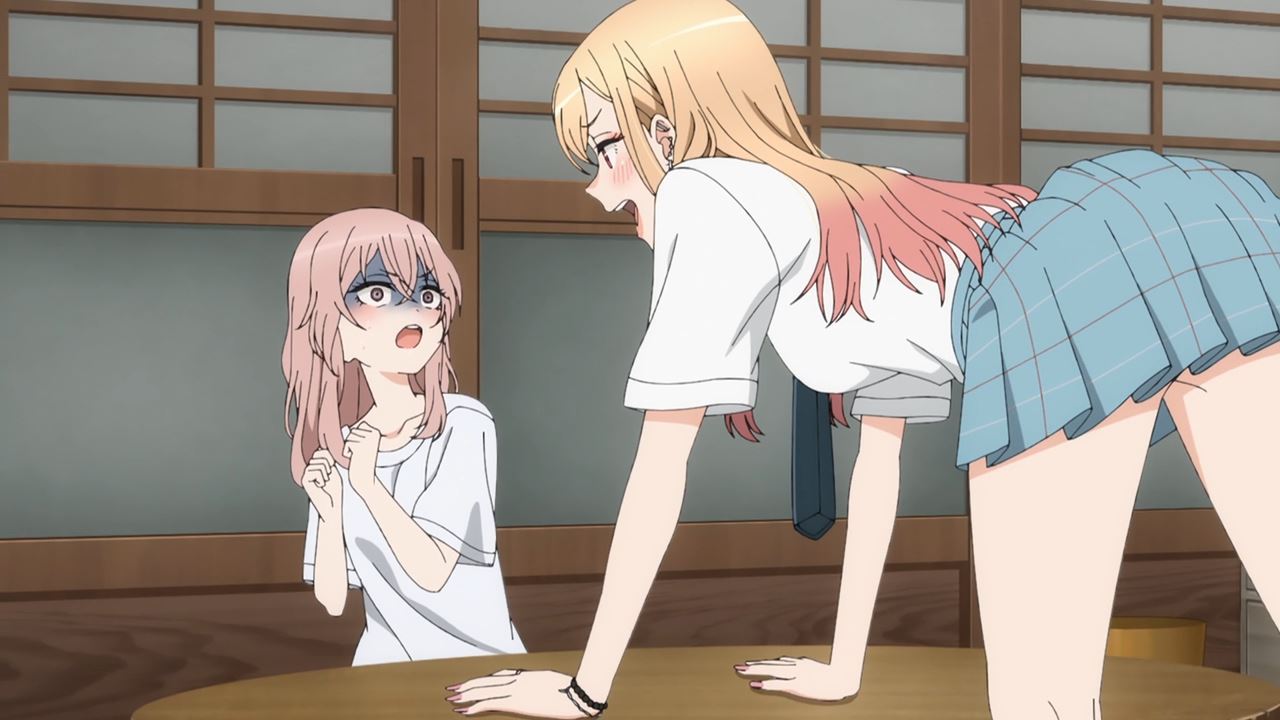 So when Marin Kitagawa learned that Juju is at Wakana’s place, she’s really excited to see a real veteran cosplayer. 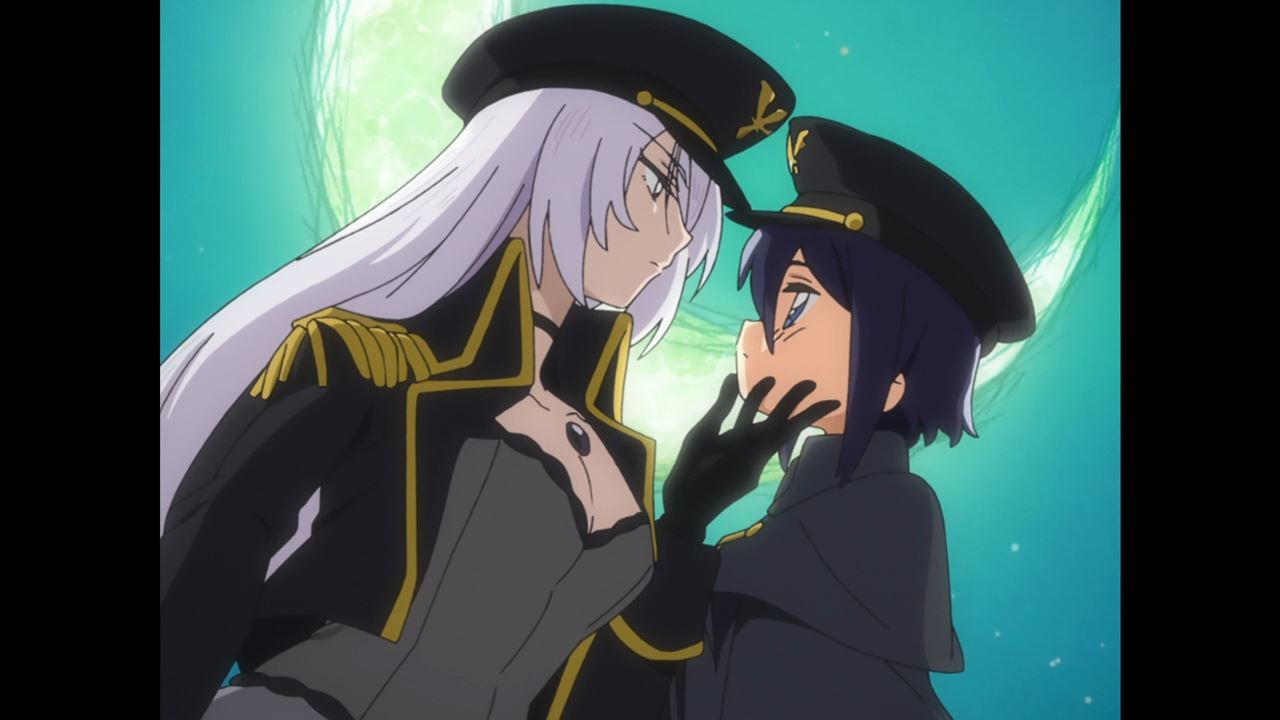 Oh yes, and the reason why the Black Lily outfit is famous is because Shion Nikaido went to the dark side thanks to her big sister Neon.

Of course, the only way for Wakana Gojo to get a grasp on Shion’s character is to watch the entire series which has 126 episodes. Oh and I forgot to mention that Flower Princess Blaze is the 2nd season of the Flower Princess franchise.

Anyways, Marin Kitagawa has the entire series at her apartment, meaning that it’s time for some binge watching of a magical girl anime that has 2 years and 3 months worth of content. 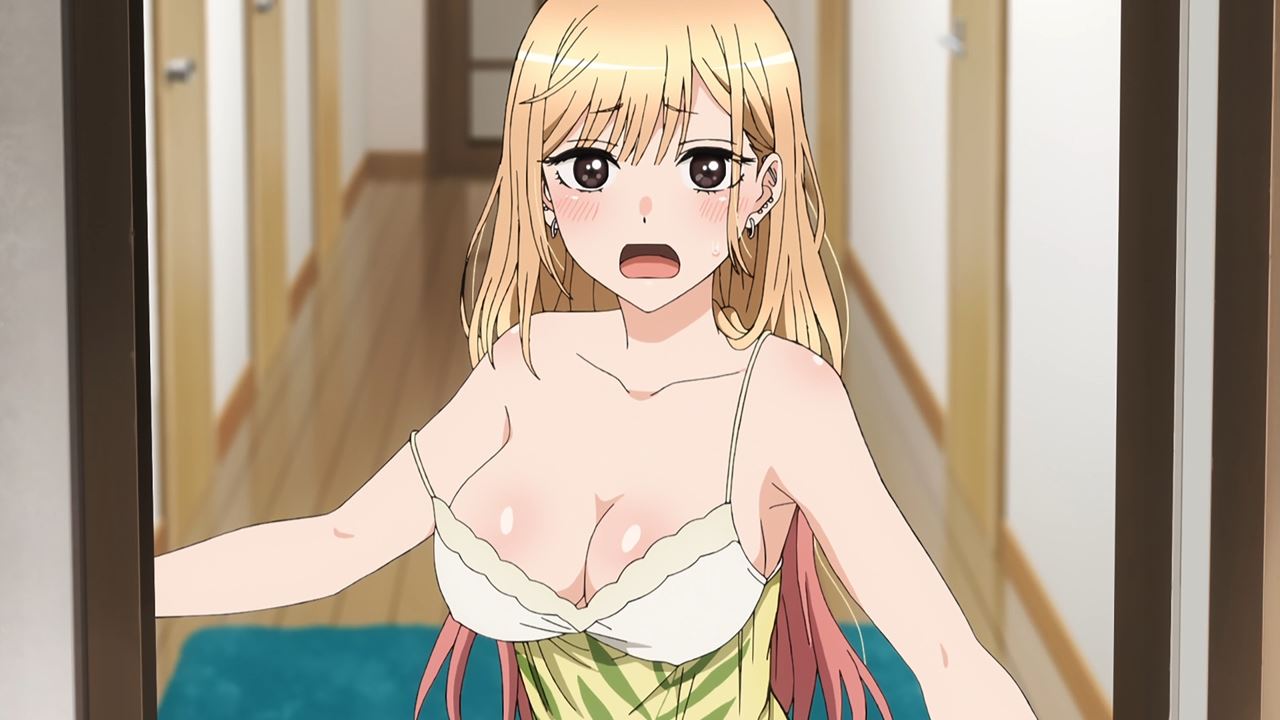 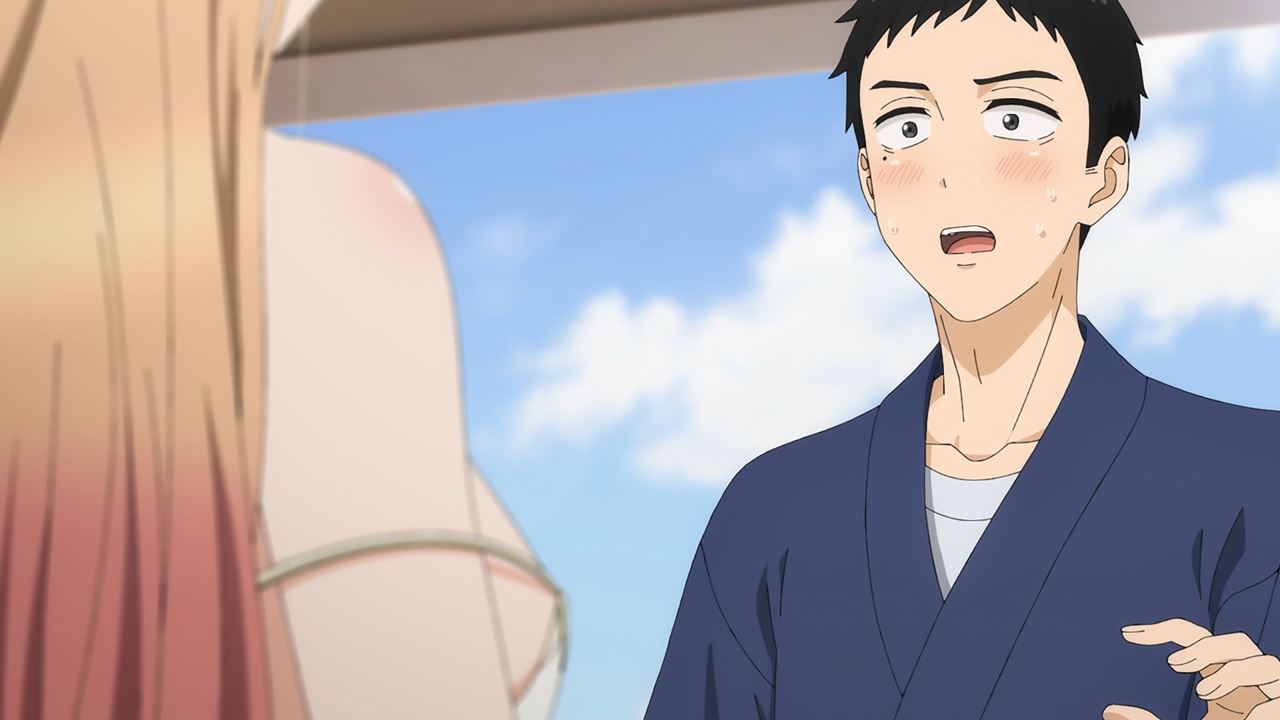 And speaking of Marin Kitagawa, looks like she’s wearing only her negligee which surprised Wakana Gojo. I have a feeling that his sexual desires are riling up again! 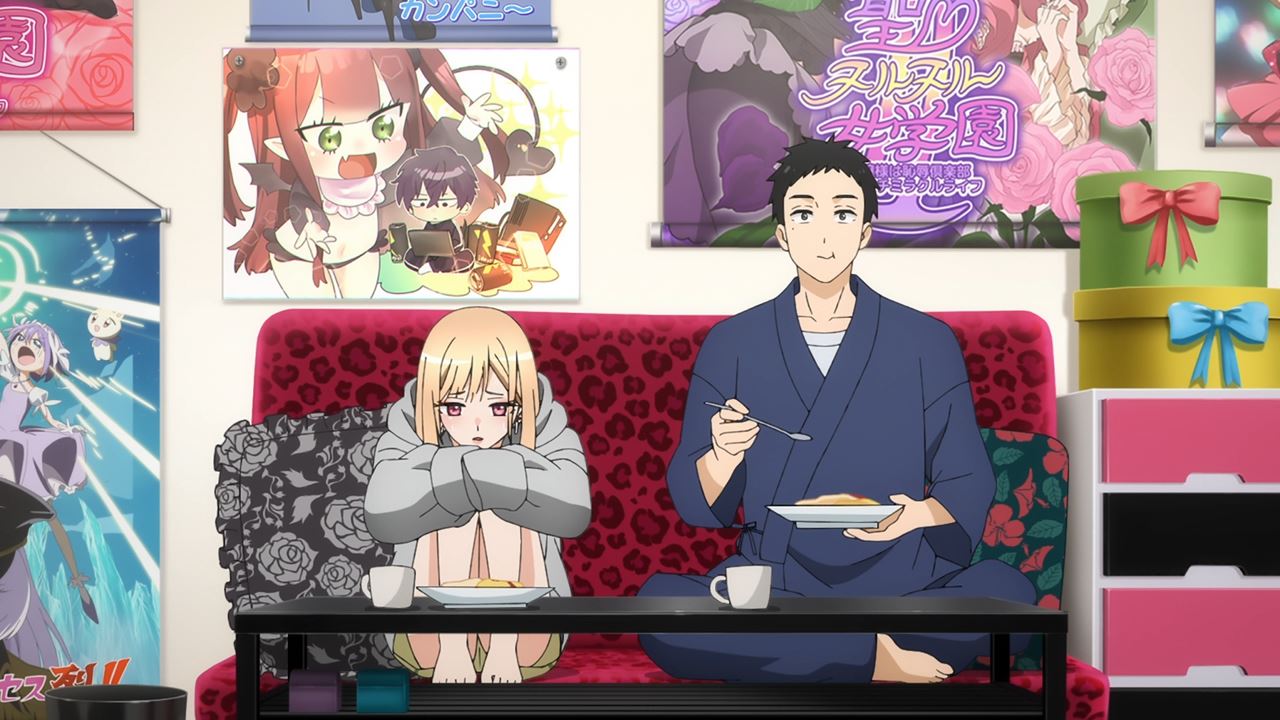 Except it didn’t happen because Gojo-kun is calm and collected as he watch a magical girl anime while eating Kitagawa’s omurice.

Speaking of Marin Kitagawa, she’s feeling a bit awkward upon sitting beside Wakana Gojo. I bet that she’s somewhat in love with Gojo-kun due to how cool he is when making costumes. 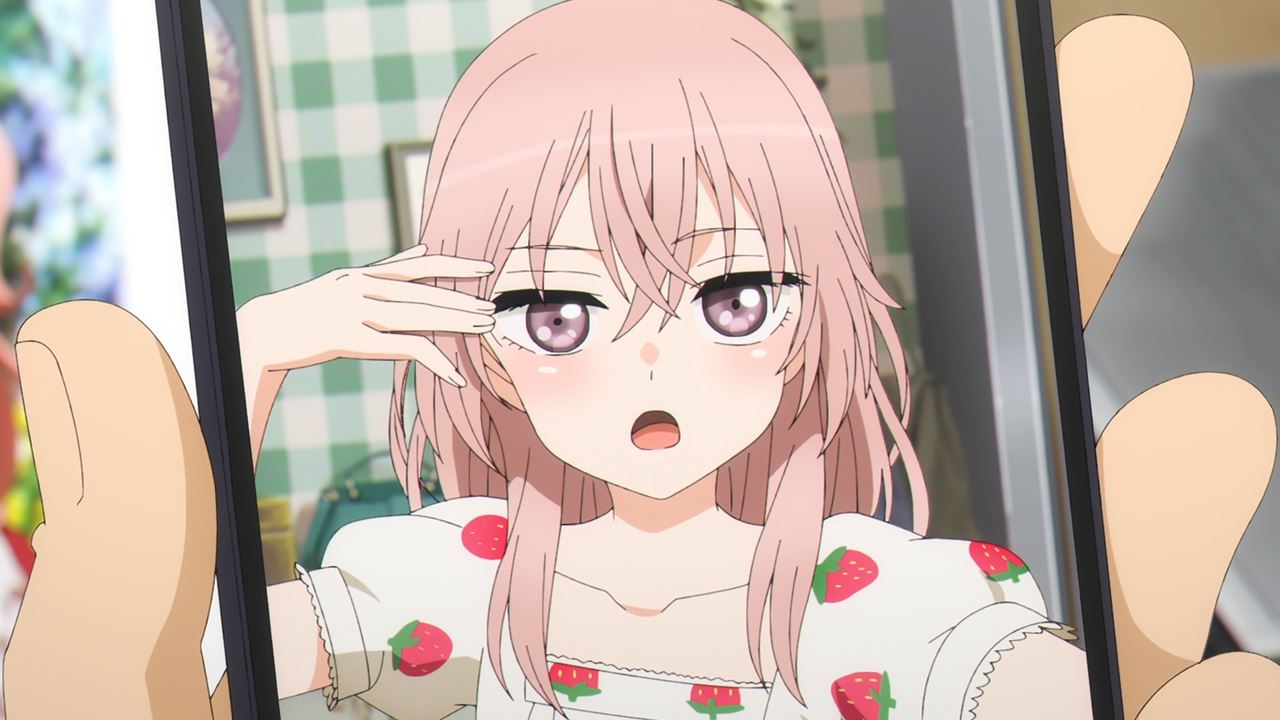 Meanwhile, here’s Sajuna “Juju” Inui where she told some tips to Wakana Gojo, like putting tape to shape the eyes. Let’s hope that he’s taking some notes in order to create the best cosplay ever!

Of course, they need a nice DSLR camera in order for their photos to look professional. Unfortunately, it’s too expensive to buy one but luckily, Juju has one. 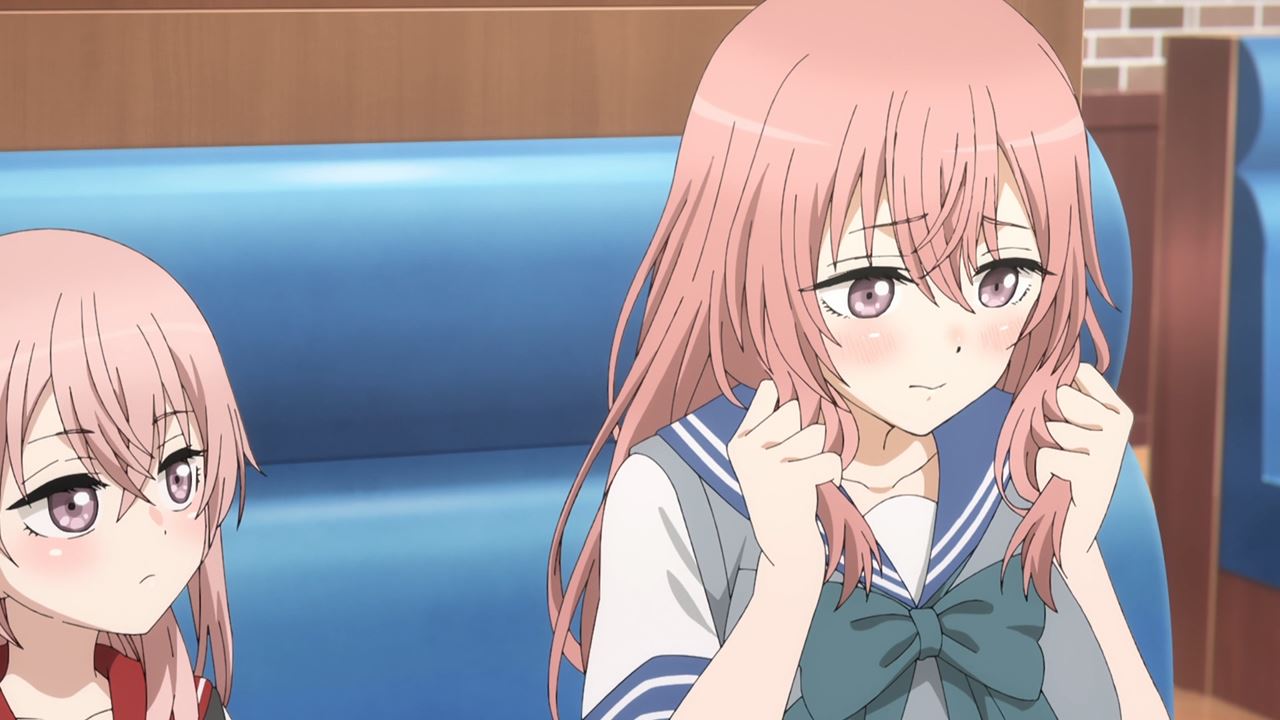 Although it turns out that her little sister Shinju Inui is handling the DSLR camera as… Man, Shinju doesn’t look like a little sister to me due to her big breasts.

Oh yeah, I forgot to mention that Shinji is a middle-school student! 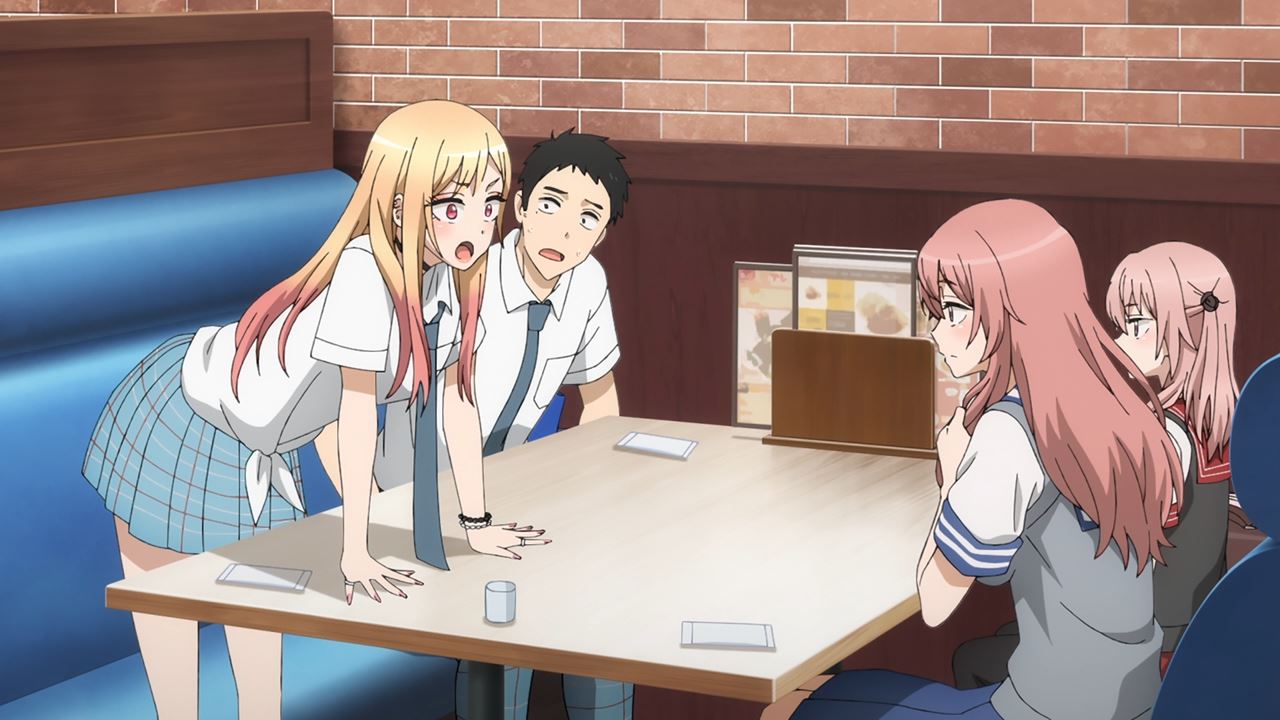 Heck, even Kitagawa is surprised that Juju’s little sister looked like a grown woman with a cute face. But anyways, let’s hope that Shinji will capture some candid shots of Juju in her Black Lily outfit.

And one more thing before I go, turns out that Marin Kitagawa wants to join too as she’ll cosplay as Neon. Well then, can’t wait for the group cosplay photoshoot next time!