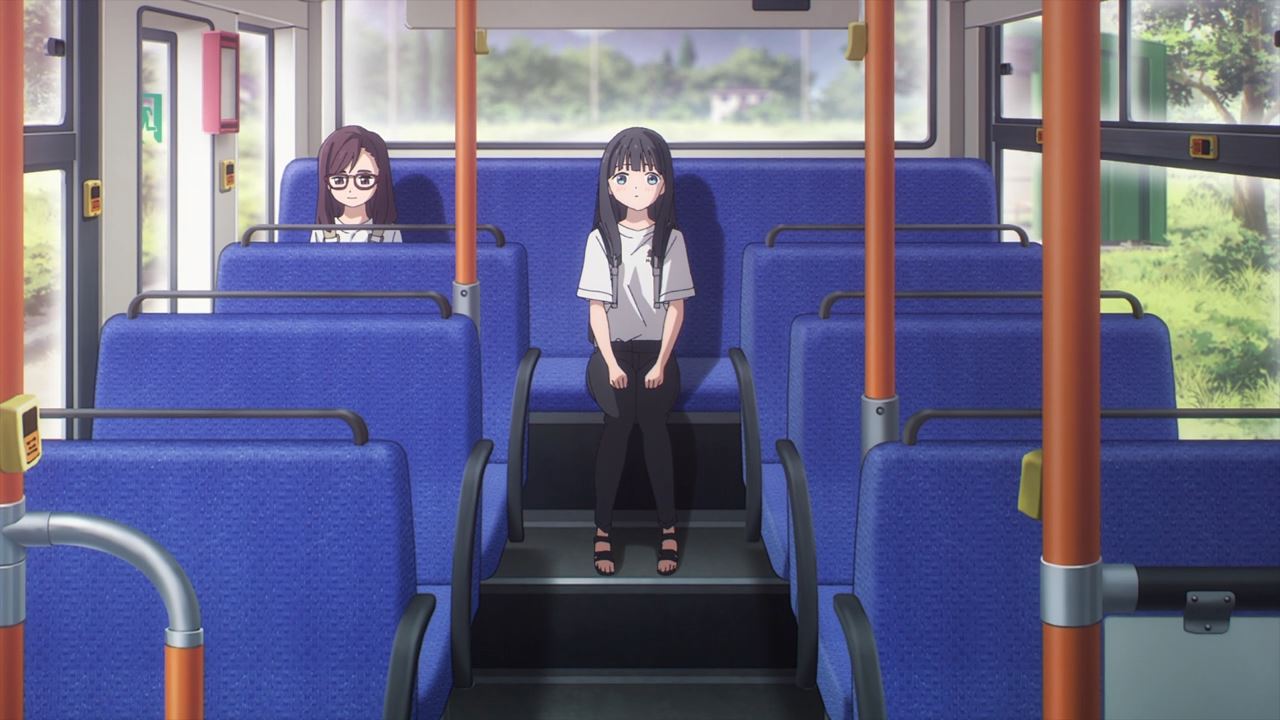 On this episode, we have Komichi Akebi where she’s heading to Sennosawa Mall together with Tomono Kojou. 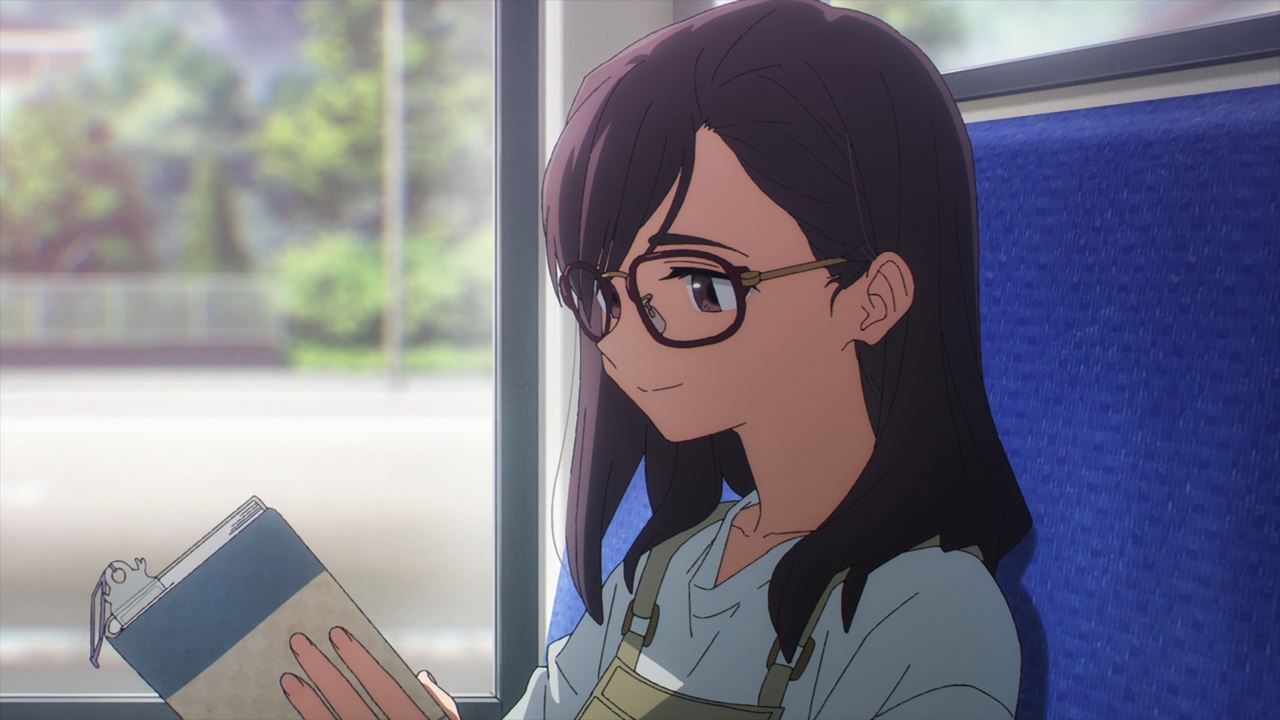 And speaking of Kojou-san, it appears that she’s deeply-engrossed into reading a novel till the end. I’m impressed on her concentration, but it would be bad if she miss the bus stop. 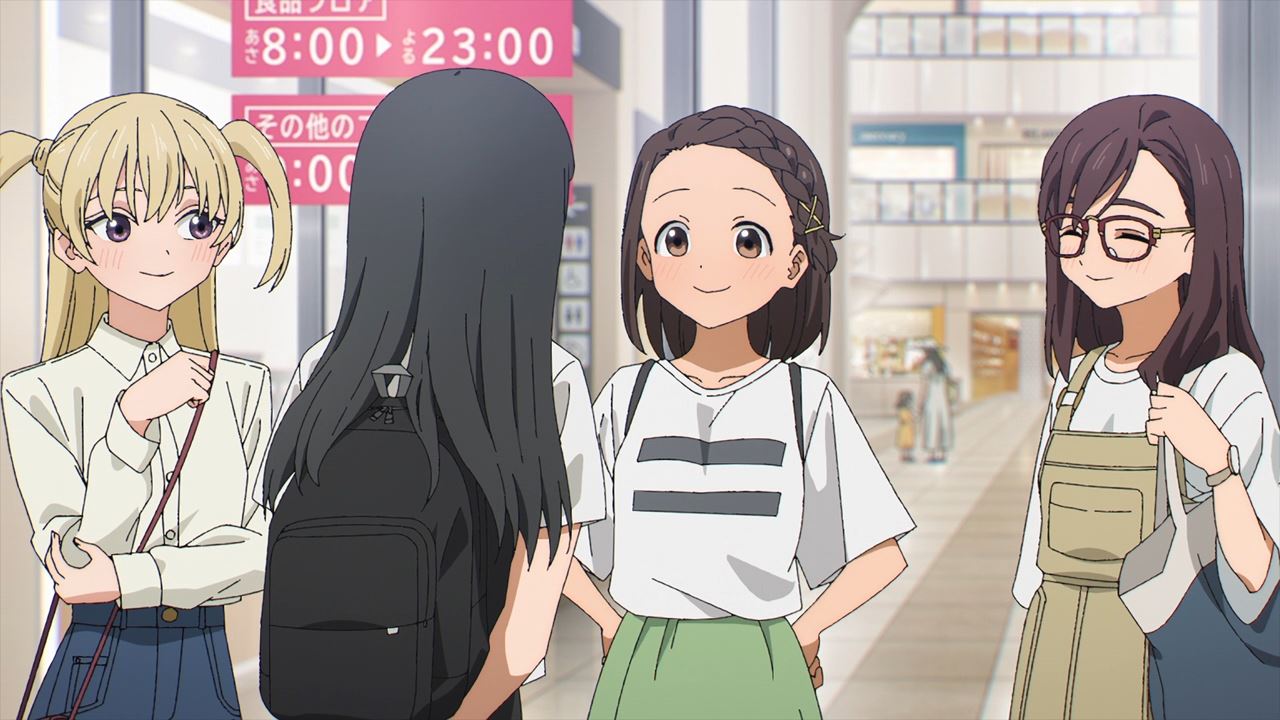 Fortunately, Akebi-chan reminded Kojou that they’ve arrived at the mall where Erika Kizaki and Touko Usagihara are already at the entrance.

With that said, they’re gonna buy some materials for the upcoming sports festival, especially the cheerleading competition. 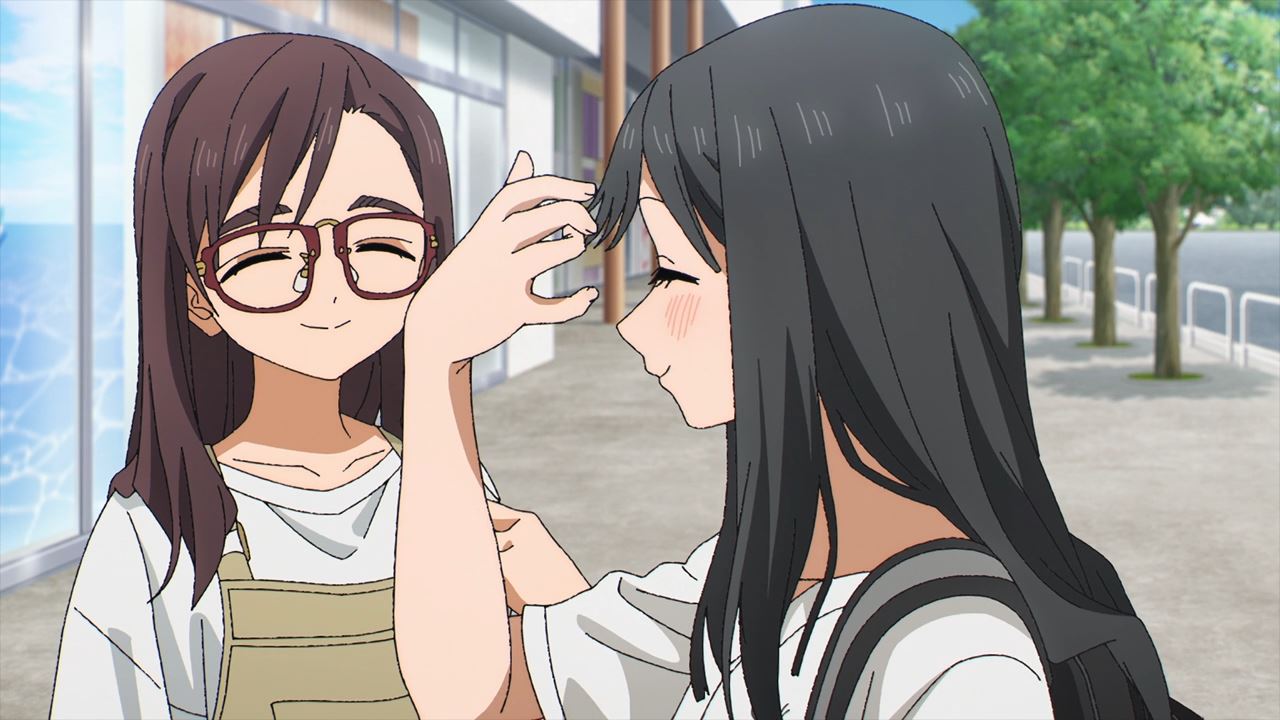 By the way, I forgot to mention that Akebi-chan got a new haircut today. Well, it’s more like cutting out the bangs to make a cleaner look. Anyways, let’s go inside! 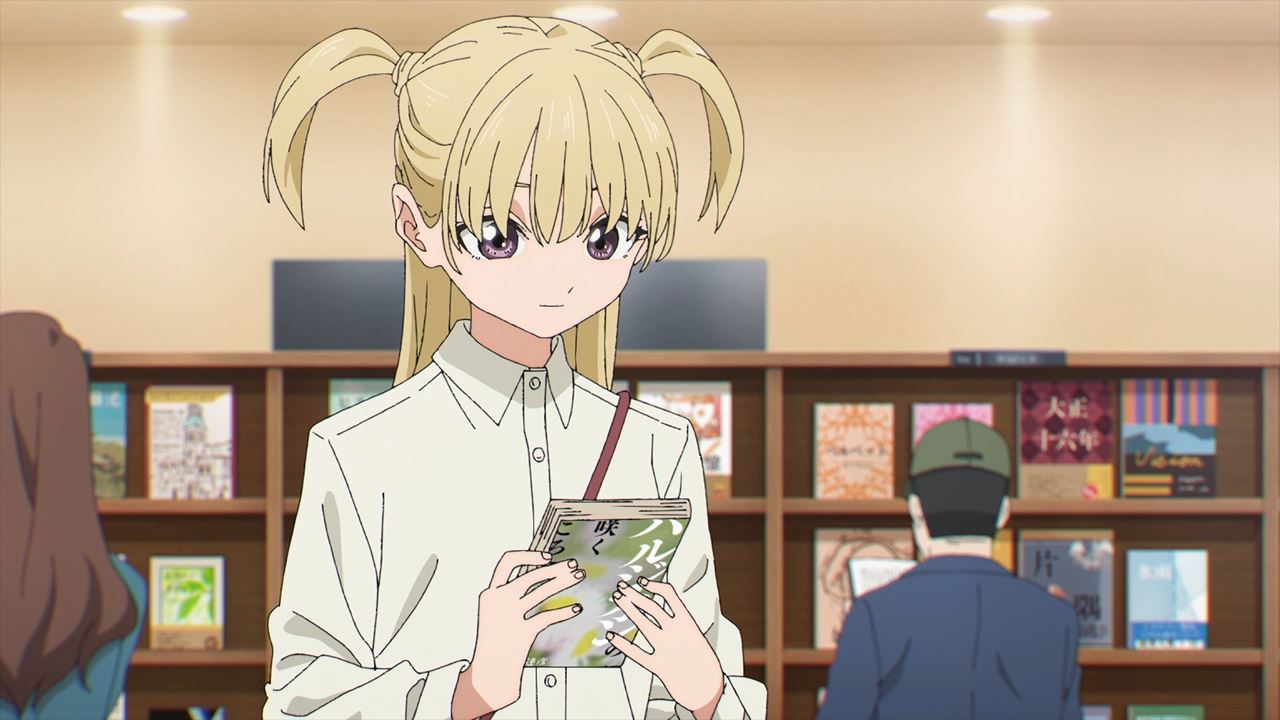 Now then, it appears that Erika Kizaki is interested in buying this novel, although I think it would be best if Kizaki asked Kojou to borrow her book since it’s the same thing. 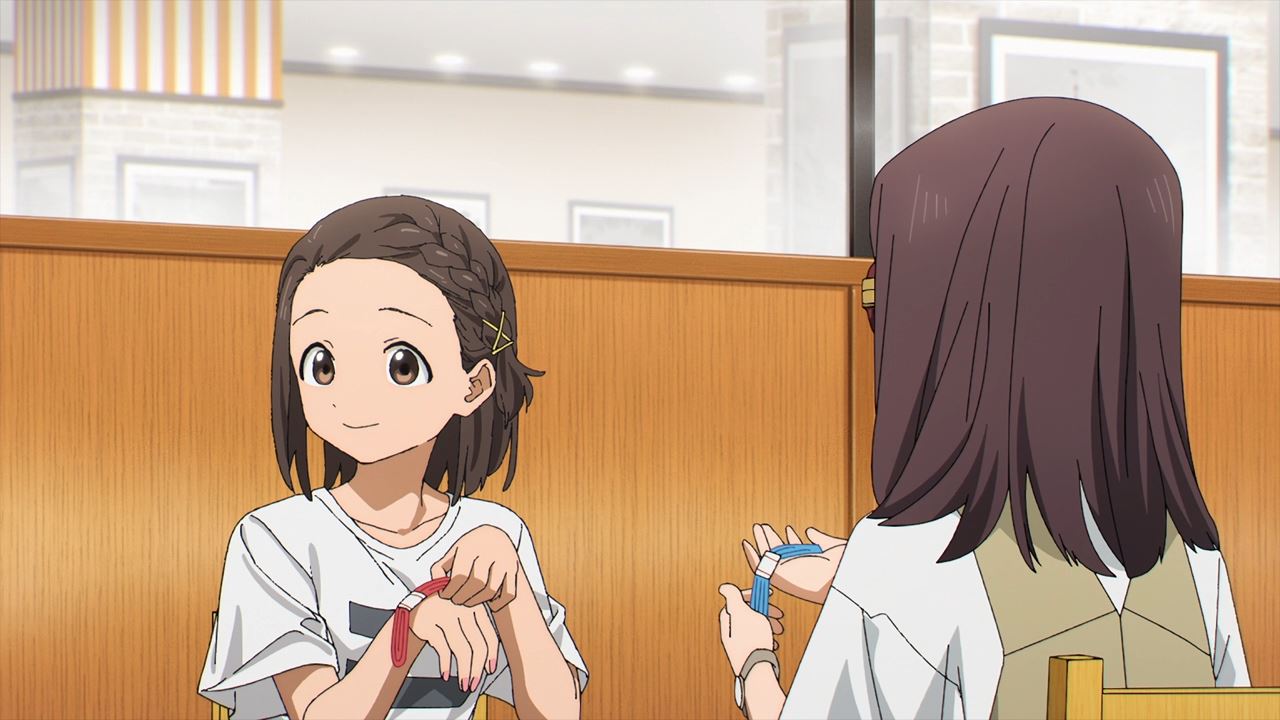 After some side-tracking, looks like they bought some necessary materials needed for the sports festival. And with that, it’s time for these girls to eat some fast food. 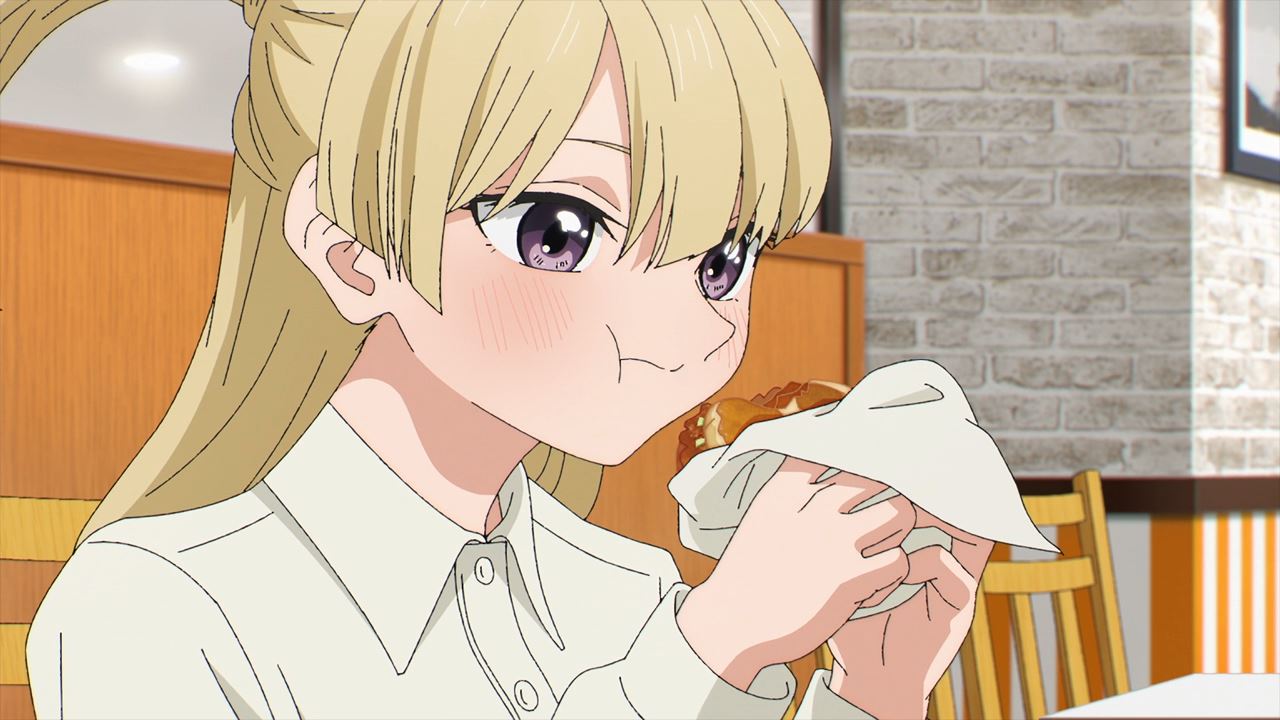 And speaking of fast food, this is the first time that Erika Kizaki ate a chicken burger. Anyways, time for them to go home after eating their meal. 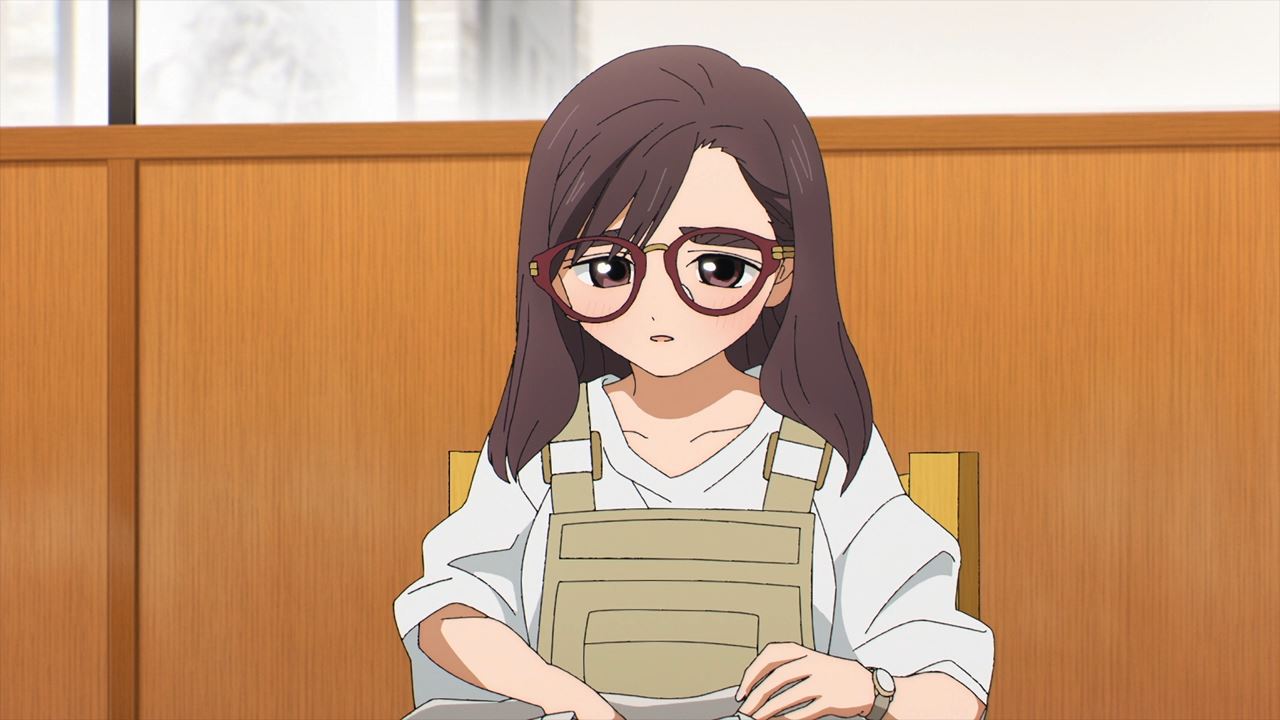 However, it appears that Tomono Kojou forgot something important. Her bookmark where Kojou received it back in elementary school. Fortunately, someone managed to find Kojou’s bookmark. 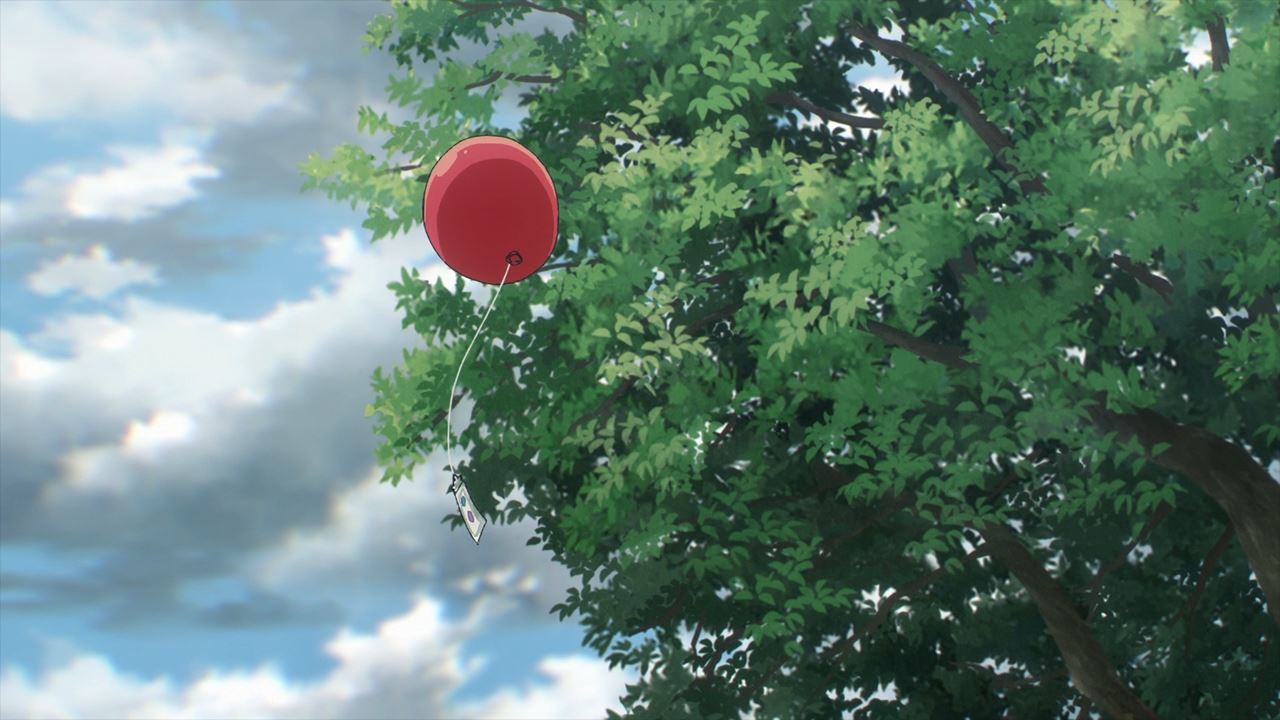 But, I’m puzzled on why it was tied into a red balloon where the chance of losing her precious thing is closer to 100%? C’mon, it’s windy today!

Good thing the balloon didn’t go up that far as it’s stuck to a tree. Now, it’s up to the girls on getting the bookmark unless someone has a slingshot. 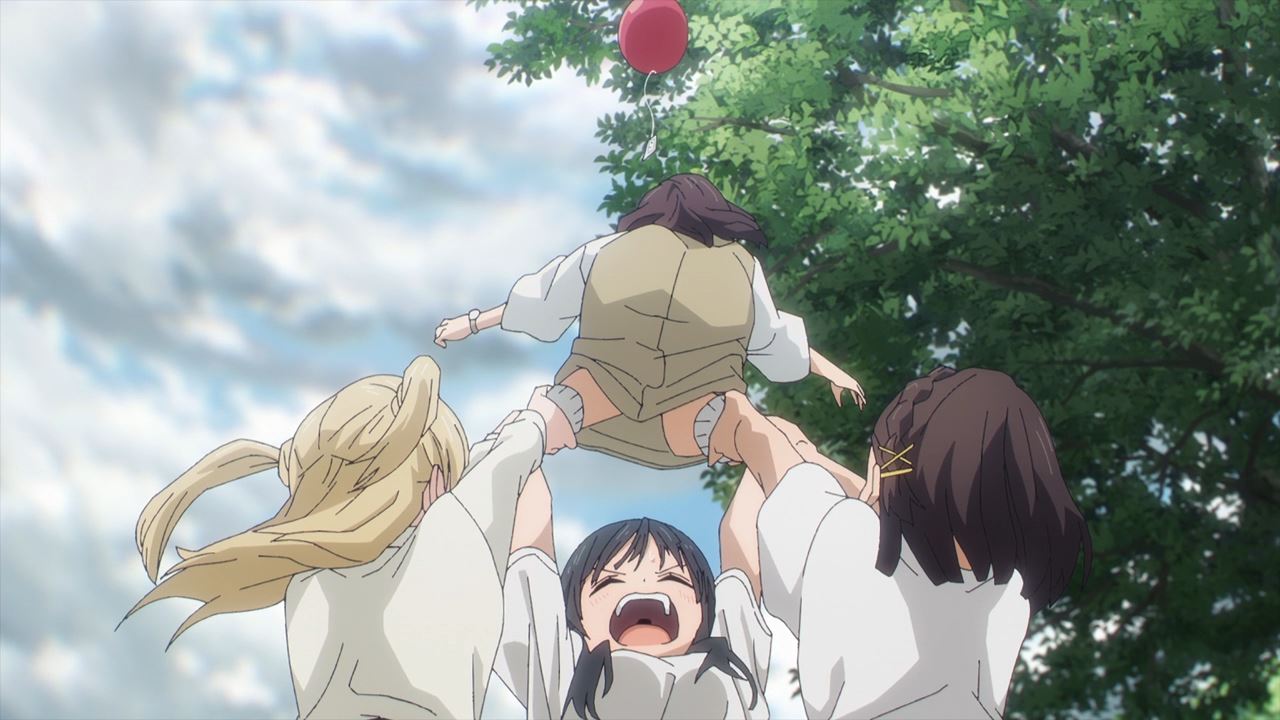 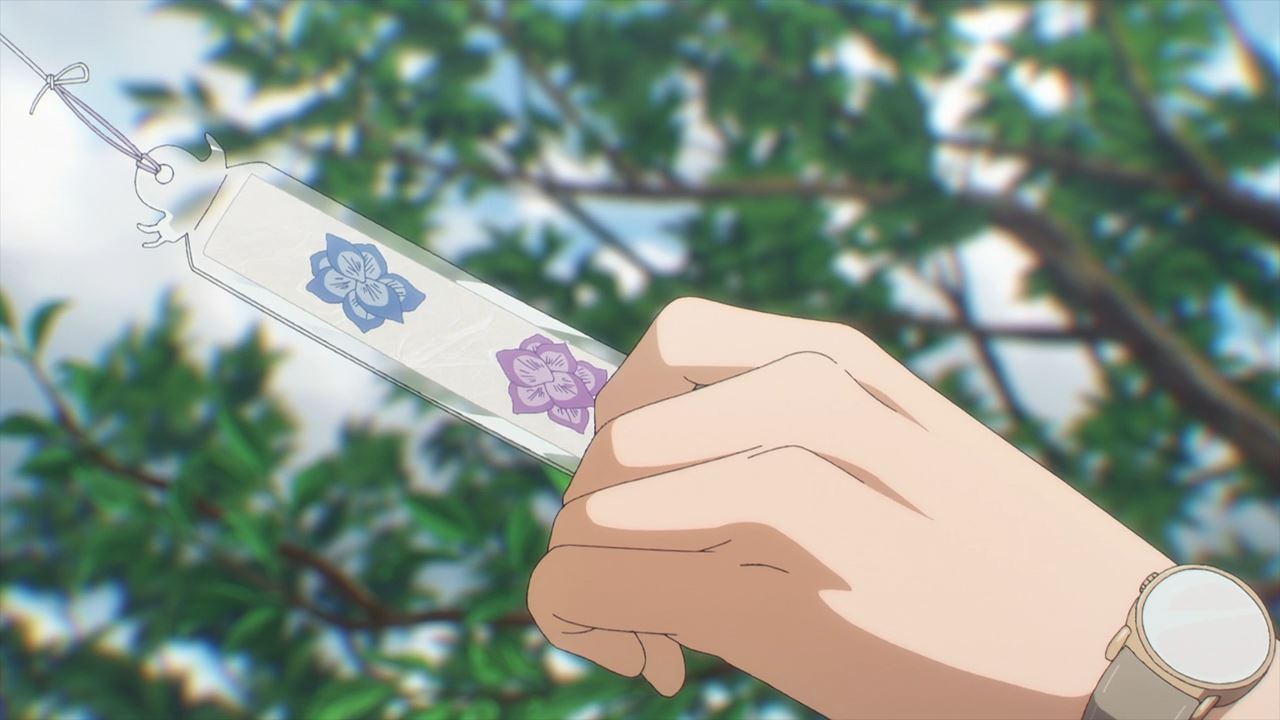 But you know what, the only way to get Tomono’s bookmark is to have her get a lift from Komichi and her friends. Also, it’s a good practice to lift someone up for the upcoming cheerleading competition. 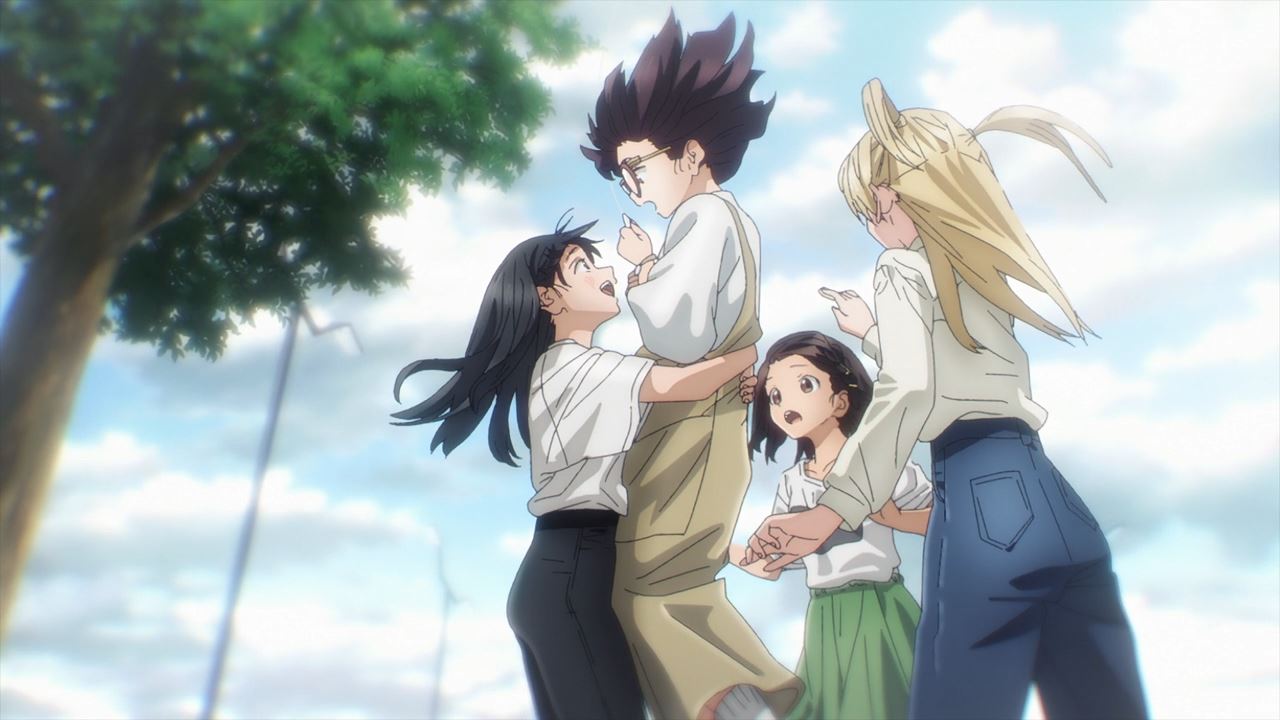 And there you have it where Tomono Kojou managed to retrieve her precious bookmark from being lost in the wind forever. And seriously, Komichi Akebi and her buddies did a great job of throwing her up in the air! 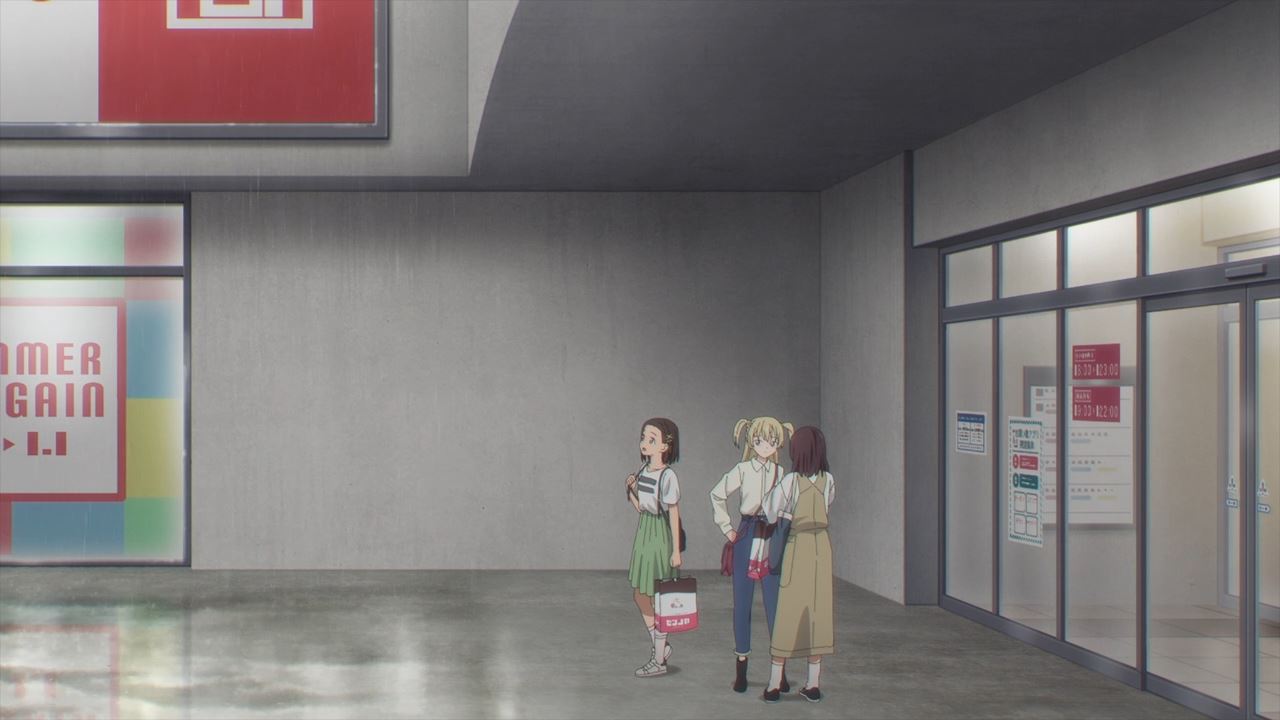 Sadly, looks like they can’t go home yet as they’re stuck in the rain. You know what, who cares if they got stuck in a rain shower as Akebi-chan and the rest can just run towards the bus stop while getting a bit drenched. 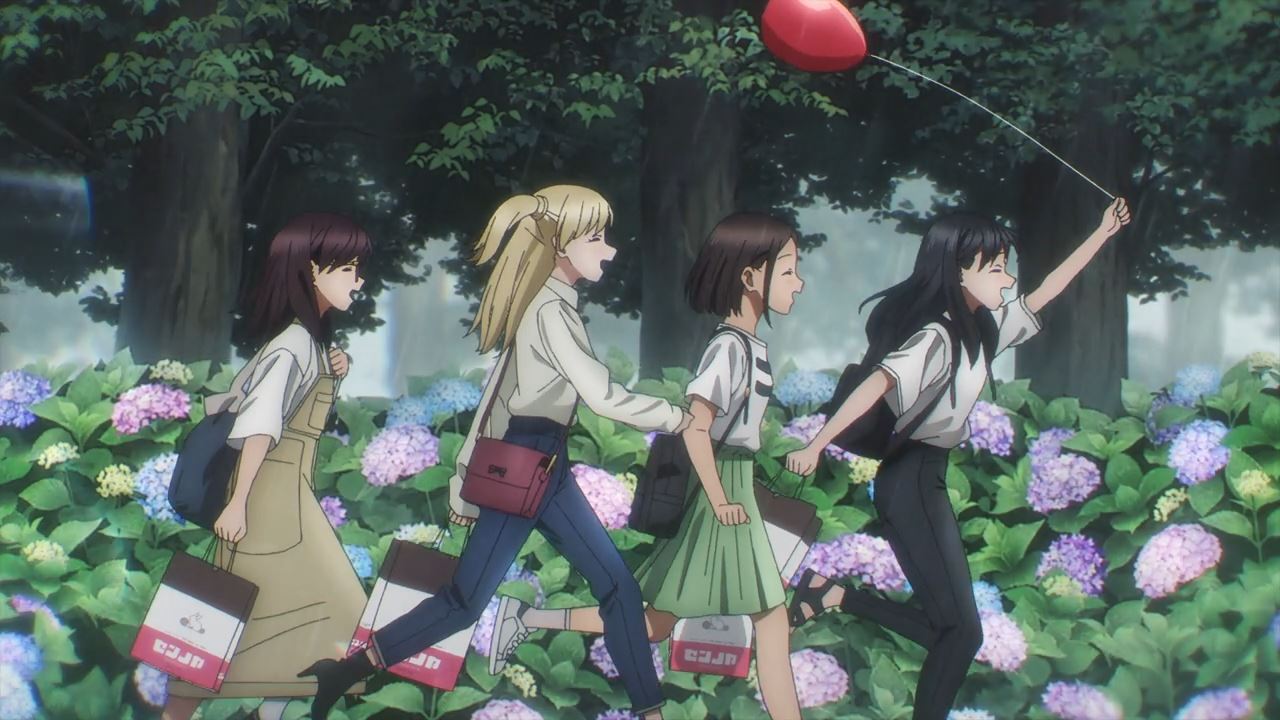 And so we end this episode where the girls are running towards the bus stop. Let’s hope that nobody got sick upon getting soaked in the rain.

Now then, I’m looking forward for the upcoming sports festival as I want to see Komichi Akebi doing splits and other acrobatic feats. Well then, I’ll see you next time!