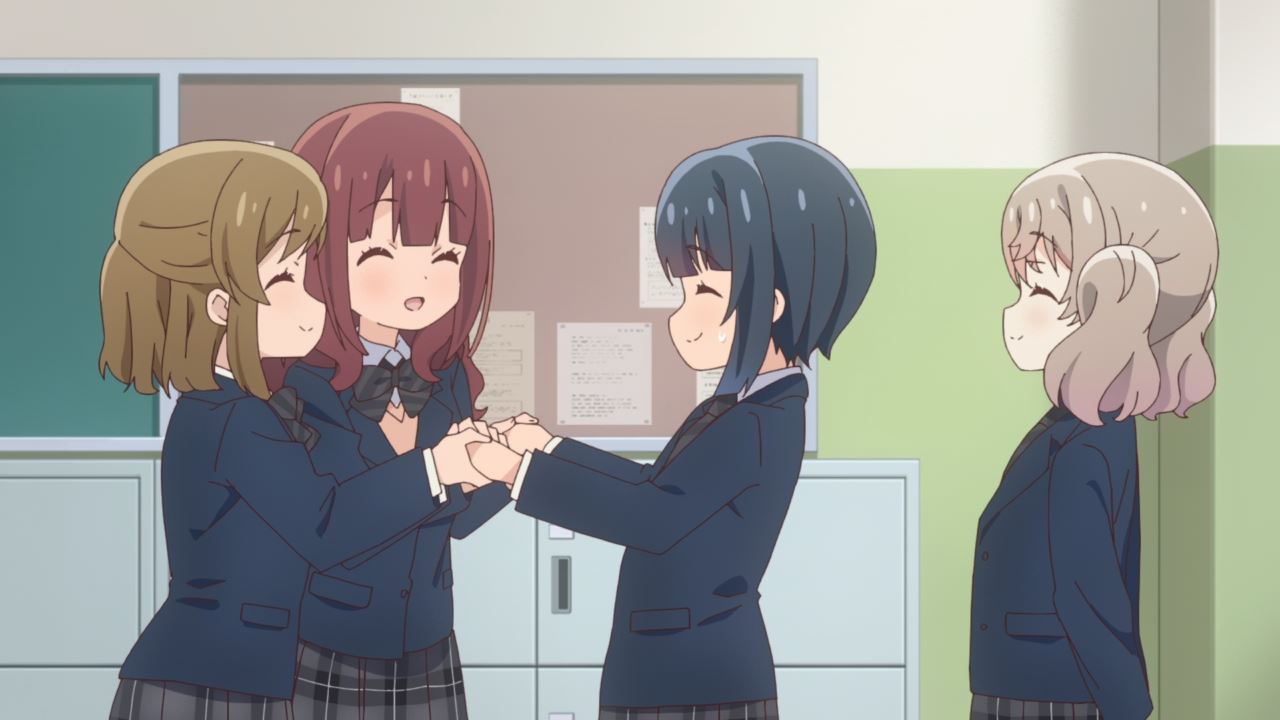 Well everyone, looks like Hiyori Minagi is being recruited by her classmates as they want her as a waitress for the upcoming school festival. Time sure flies, huh? 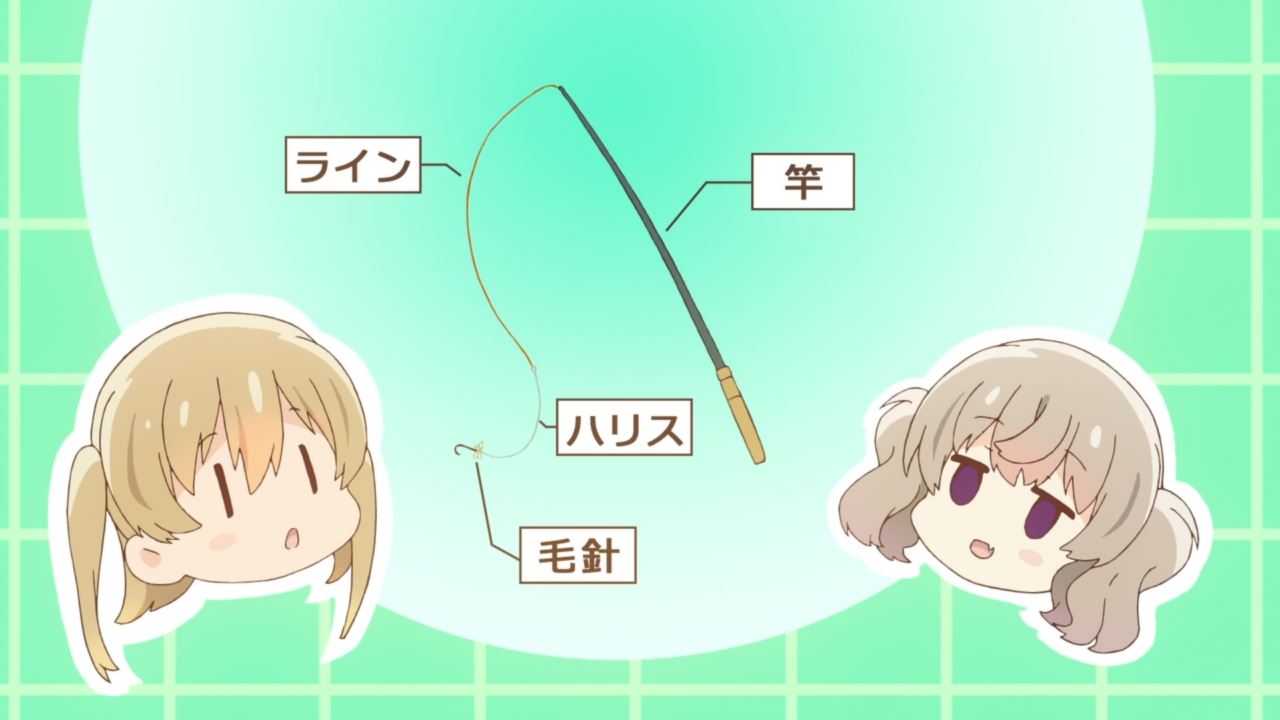 Oh by the way, it appears that Koharu learned something as tenkara is similar to fly fishing, except that there’s no reel attached to the rod.

Furthermore, people using the tenkara are just fishing at the own pace, whereas fly fishing treats it as a sport. Of course, Koharu won’t have a fishing stall in her class as they’ll put something else. 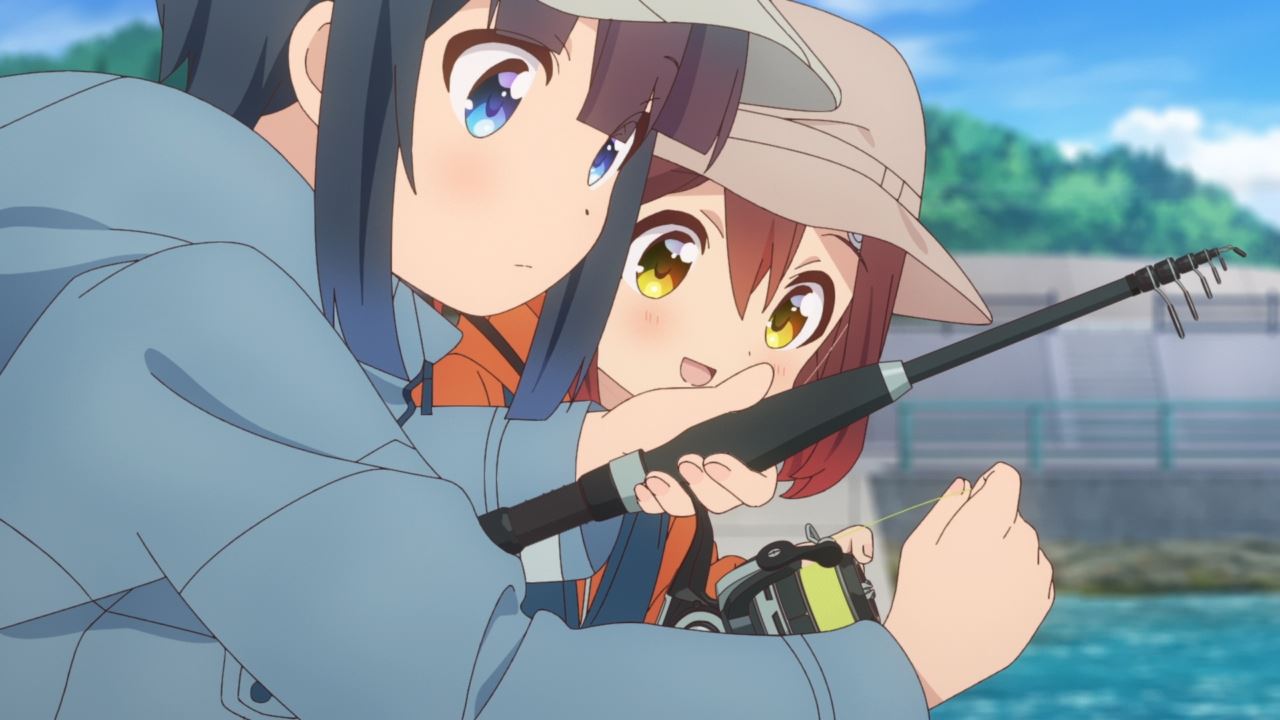 For now, it’s time for a fishing session with Hiyori Minagi and Futaba Fukumoto. Of course, the latter will teach the former on how to use a retractable rod with a chum bucket, lots of hooks to attach baits, and a sinker at the end. 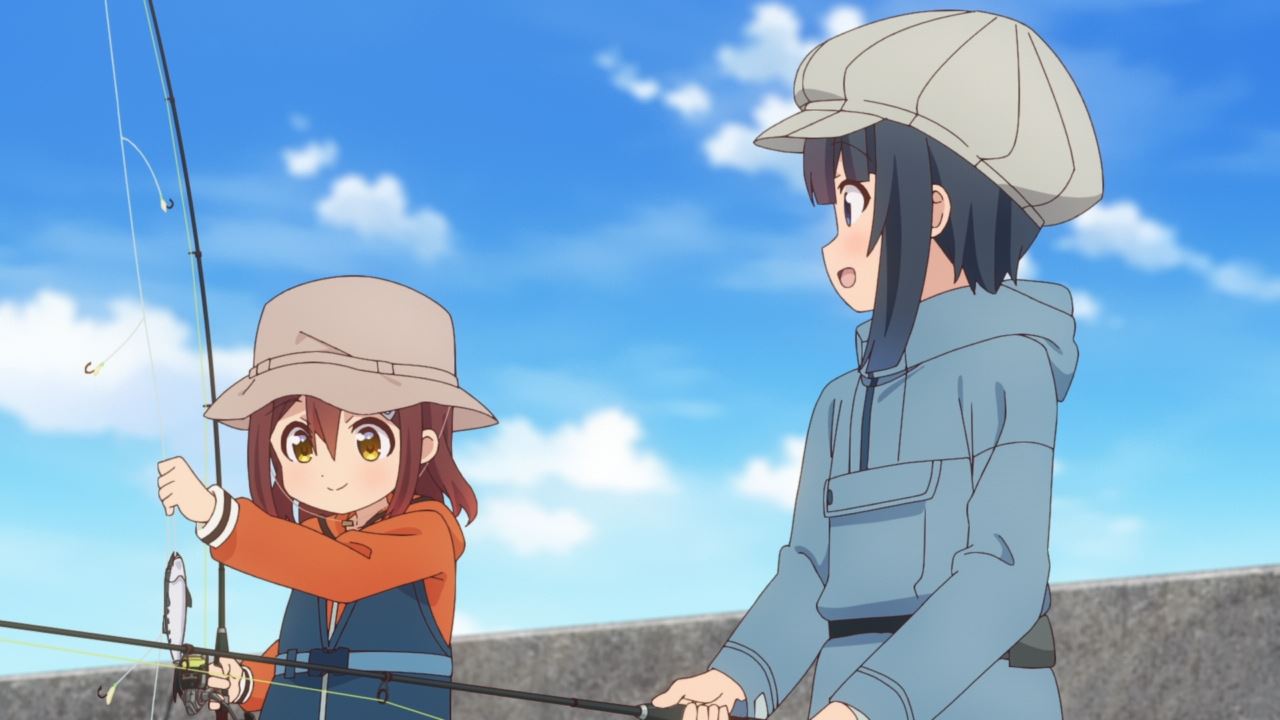 Speaking of Futaba, looks like she’s the master on this episode where she caught a fish using her retractable rod. 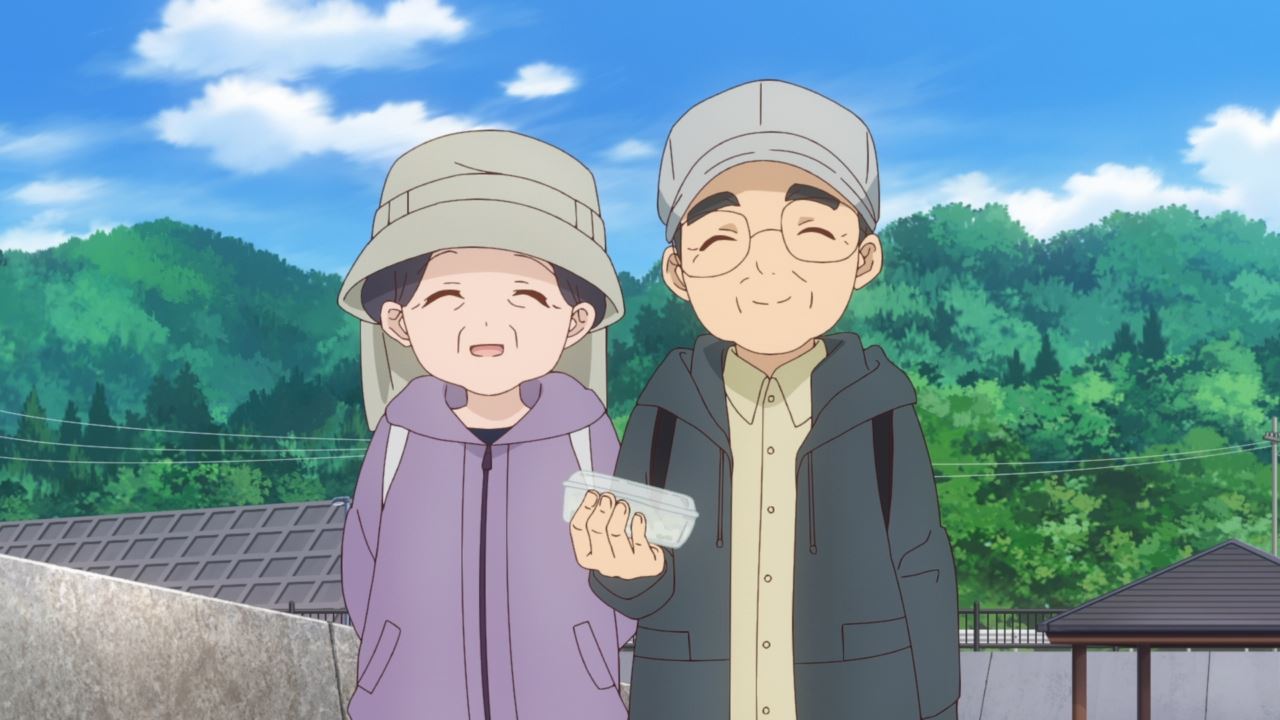 Meanwhile, looks like an old couple appeared to give them a box of eunicid worms as bait. Oh boy, Hiyori might break hives upon touching some creepy crawlies. 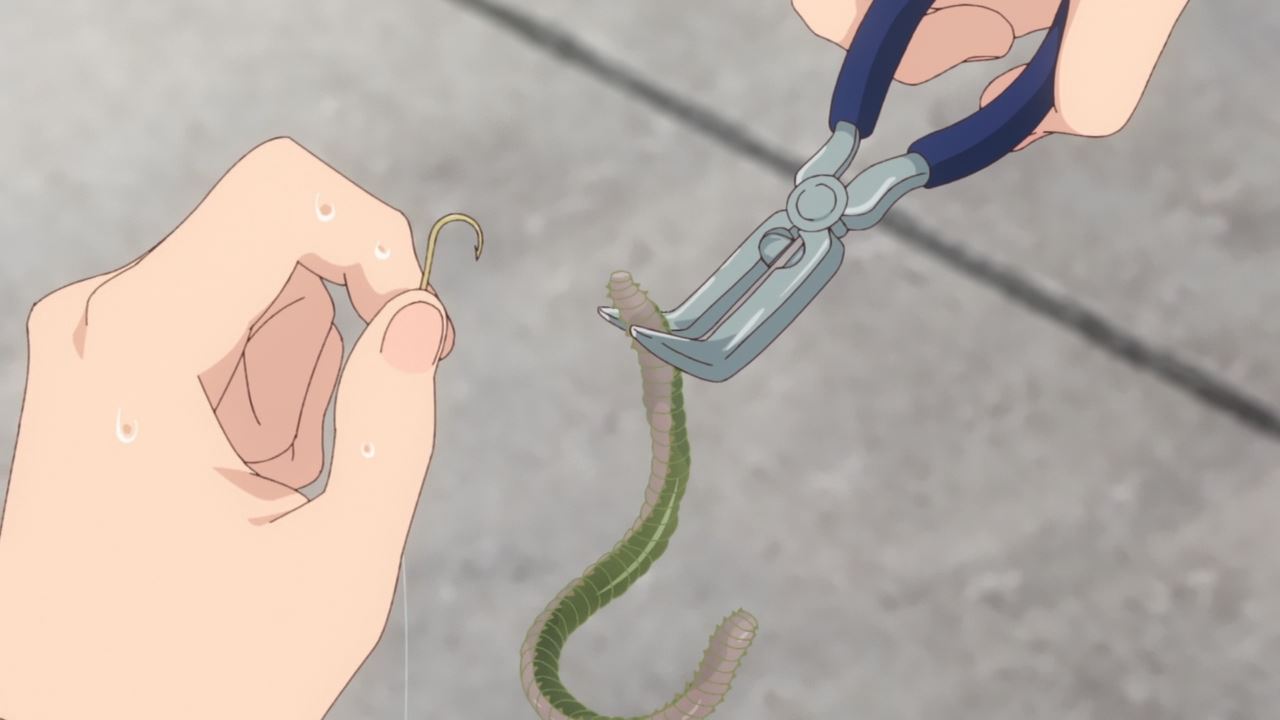 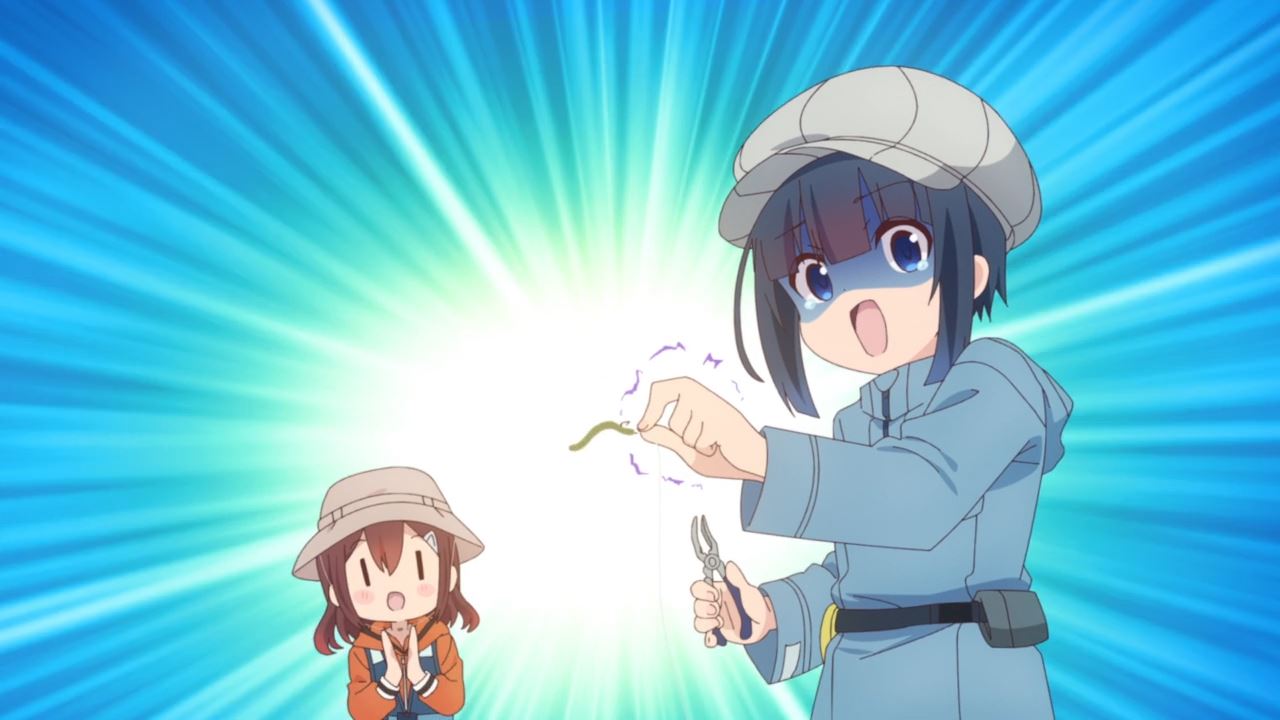 However, she managed to tough it out and grab the worms using pliers, and then her hands. Glad that you grab those creepy crawlies, Hiyori-chan. 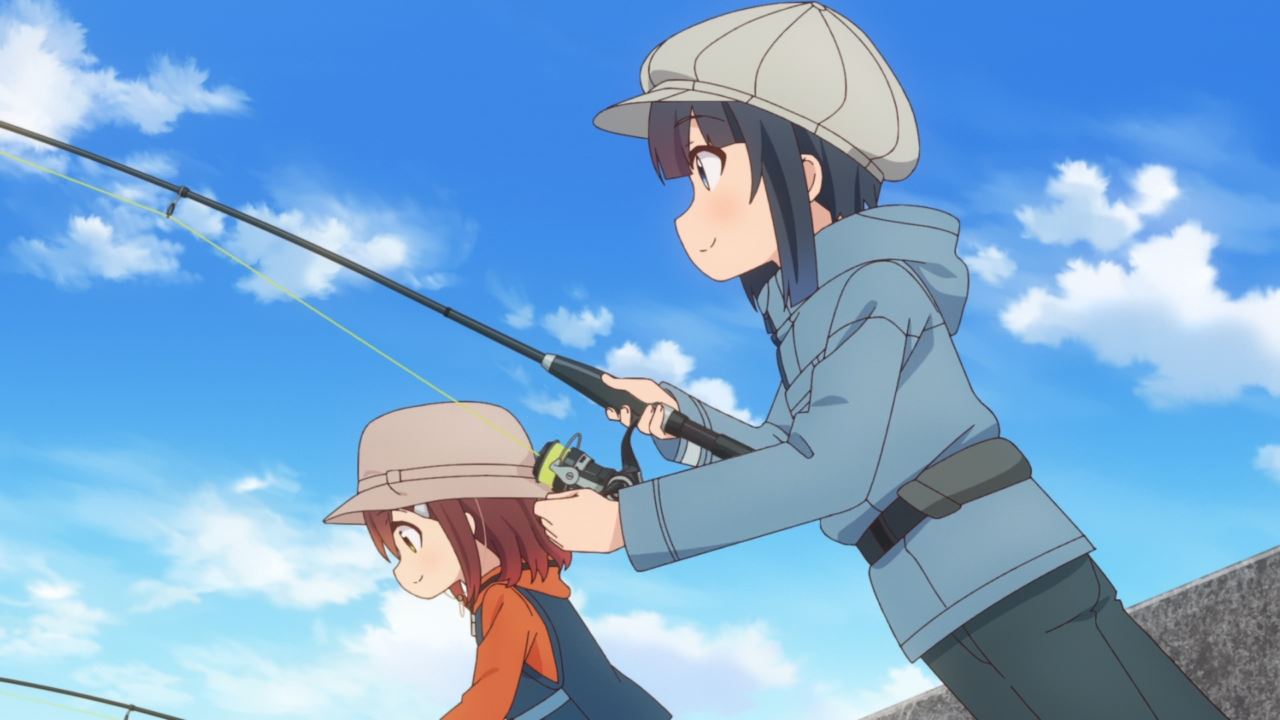 Speaking of Hiyori, looks like she caught one using her retractable rod. Oh I wonder what kind of fish she caught today? 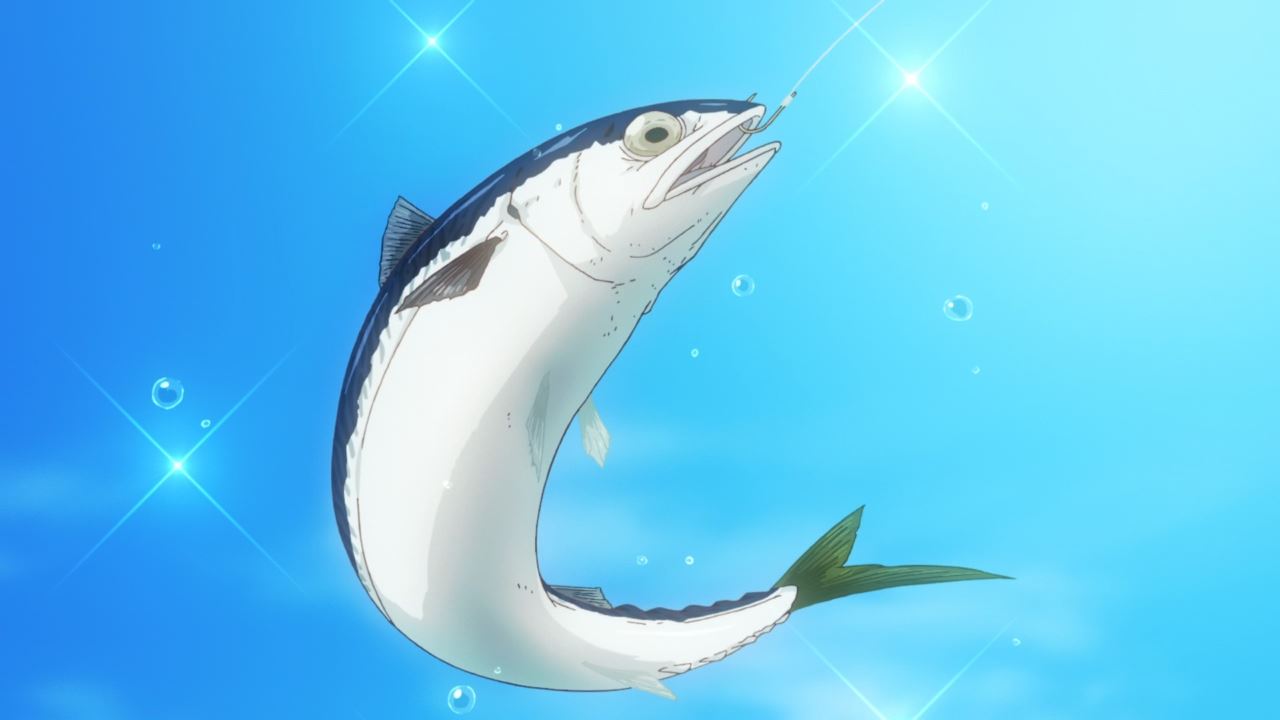 Oh, it’s a mackerel and I have to say that it’ll turn into a nice dish soon. Anyways, looks like Hiyori learned how to use a retractable rod with all the accessories attached. 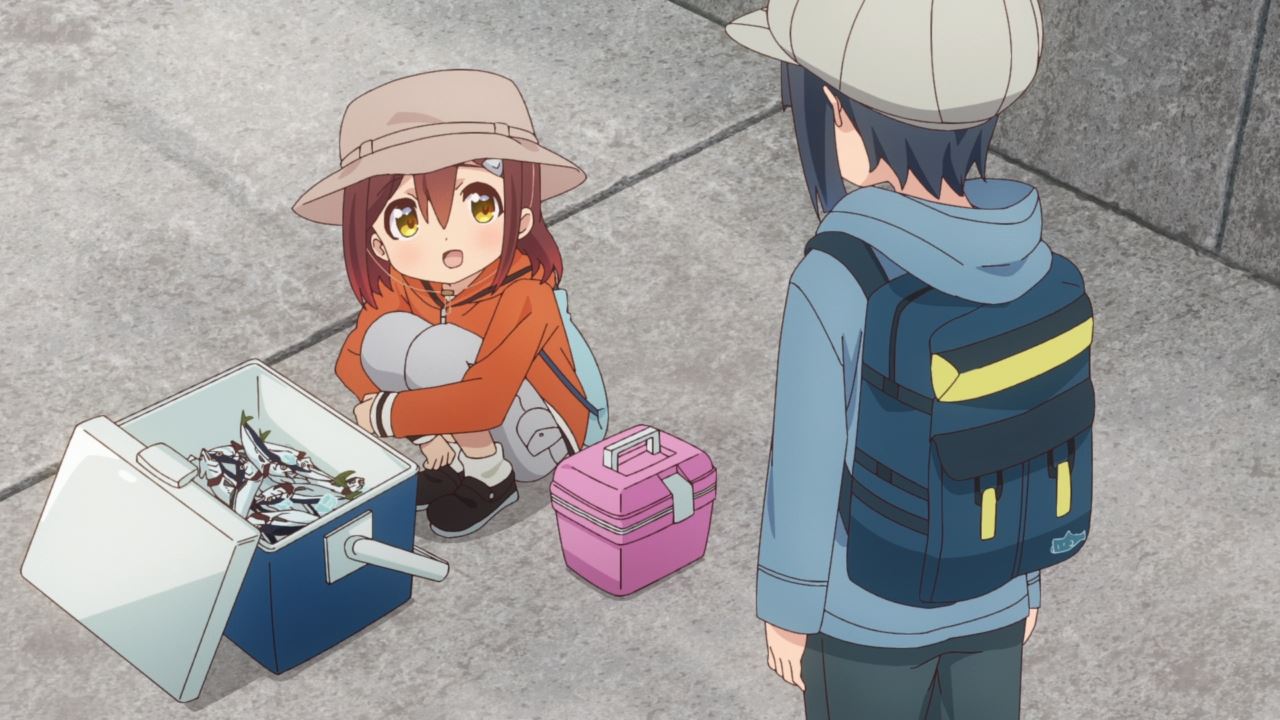 One more thing, I forgot to tell you that Futaba Fukumoto will participate at a recital, but she’s having some stage fright and thus Futaba decided to go fishing to clear her mind.

But you know what, the fact that she teach Hiyori a new fishing method is astonishing that she can do the recital on her own. 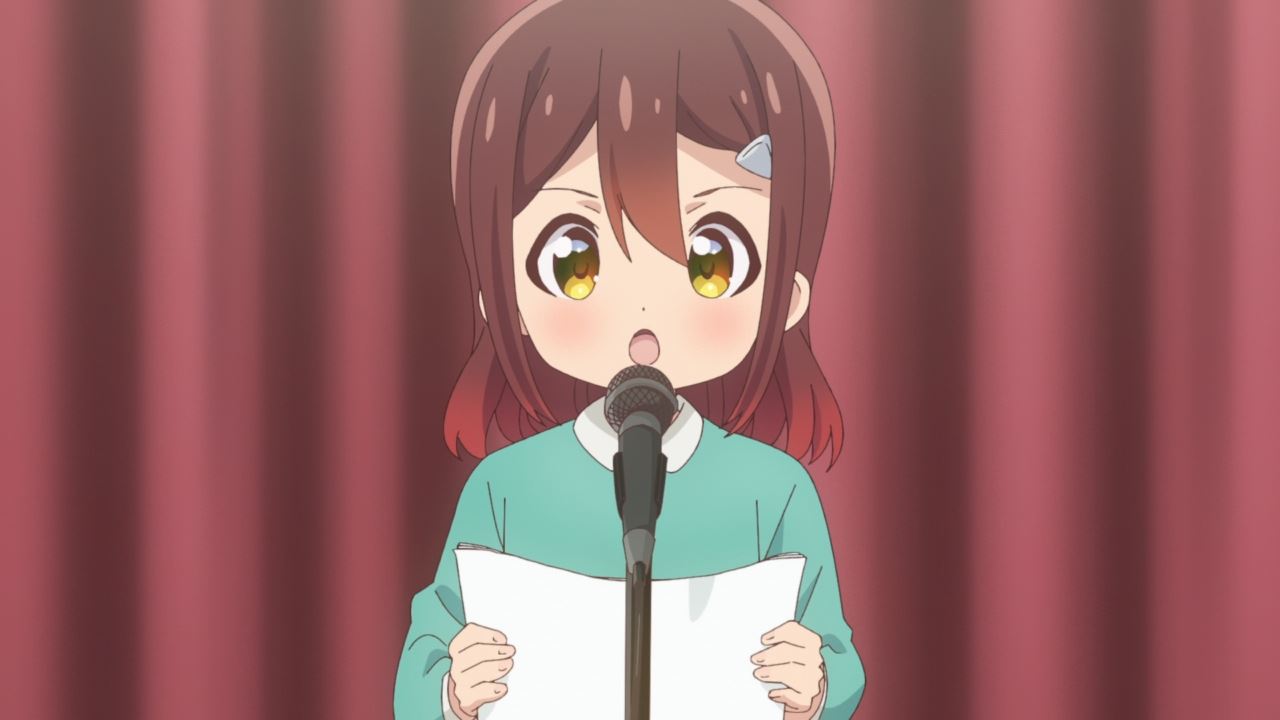 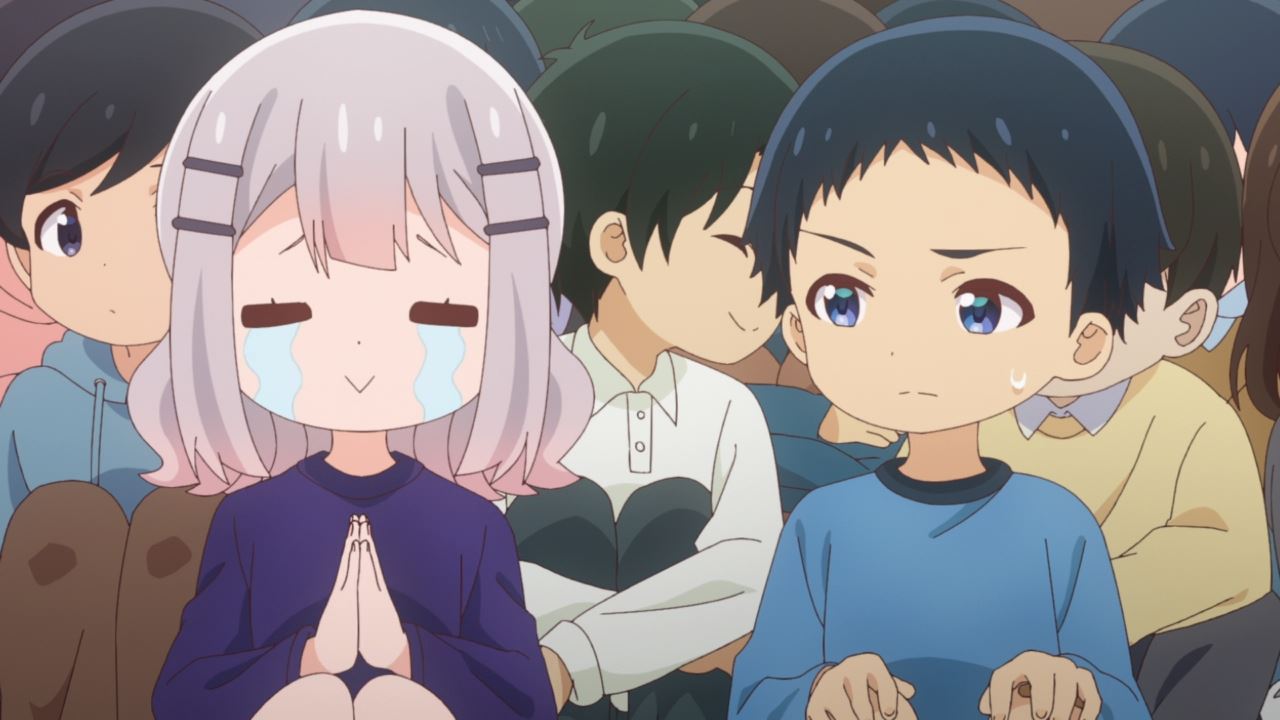 In any case, looks like Futaba-chan did well at her recital that her friend Aiko-chan is happy to see her on-stage.

By the way, let’s move onto Minami Kana High School where they’re holding their school festival there. 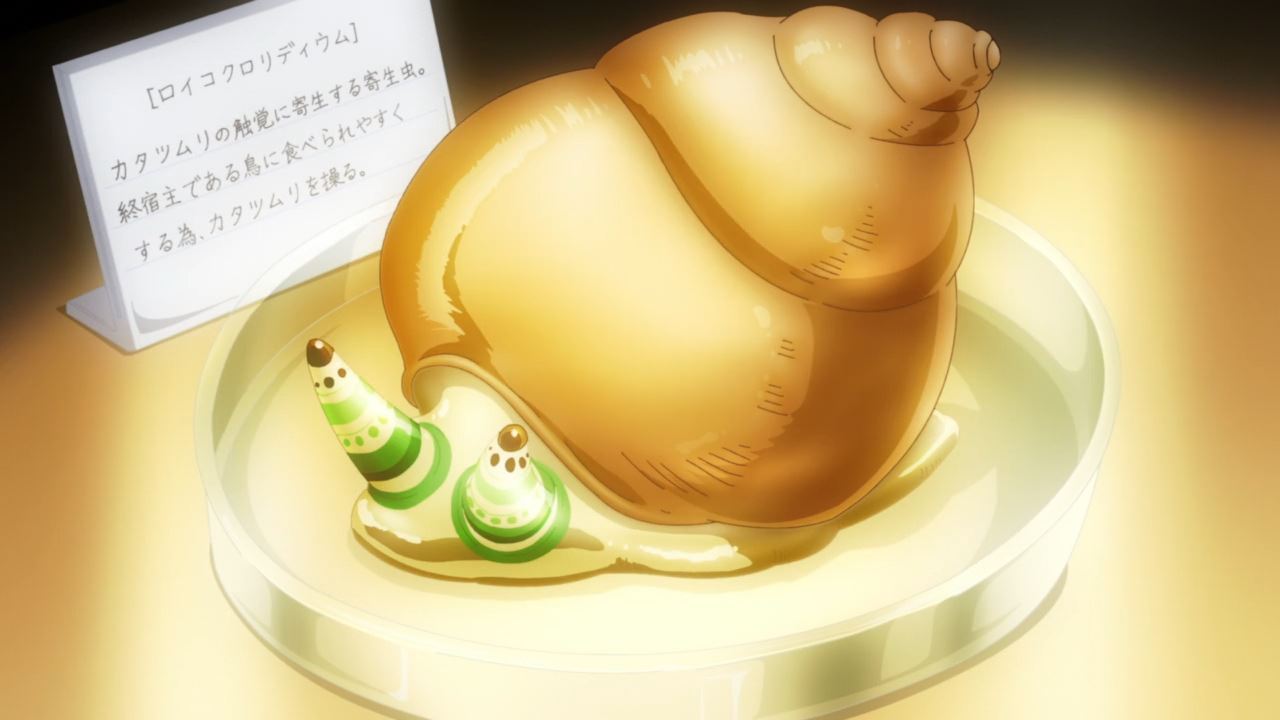 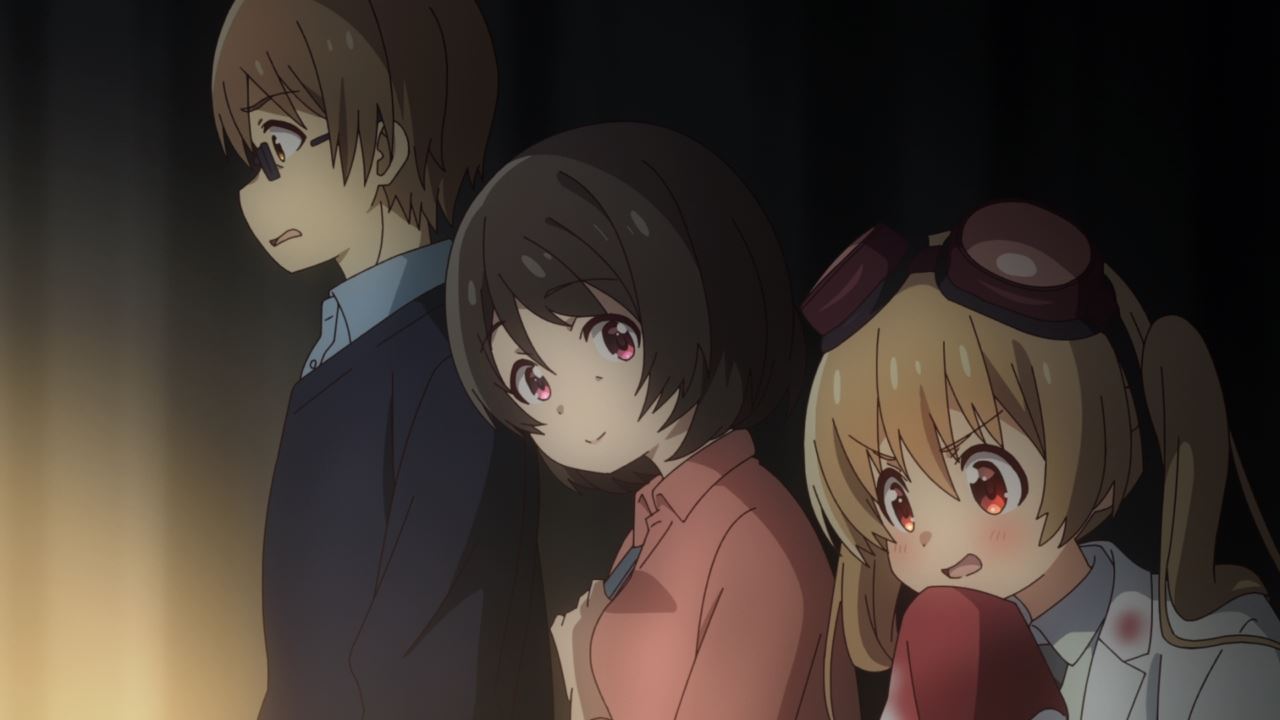 However, it appears that there are some attractions that are quite bizarre, as Koharu and her class made a parasite exhibit.

Oh yeah, they’re made of clay so it’s not real, although I feel that they should have made a normal attraction like a haunted house or even a café. 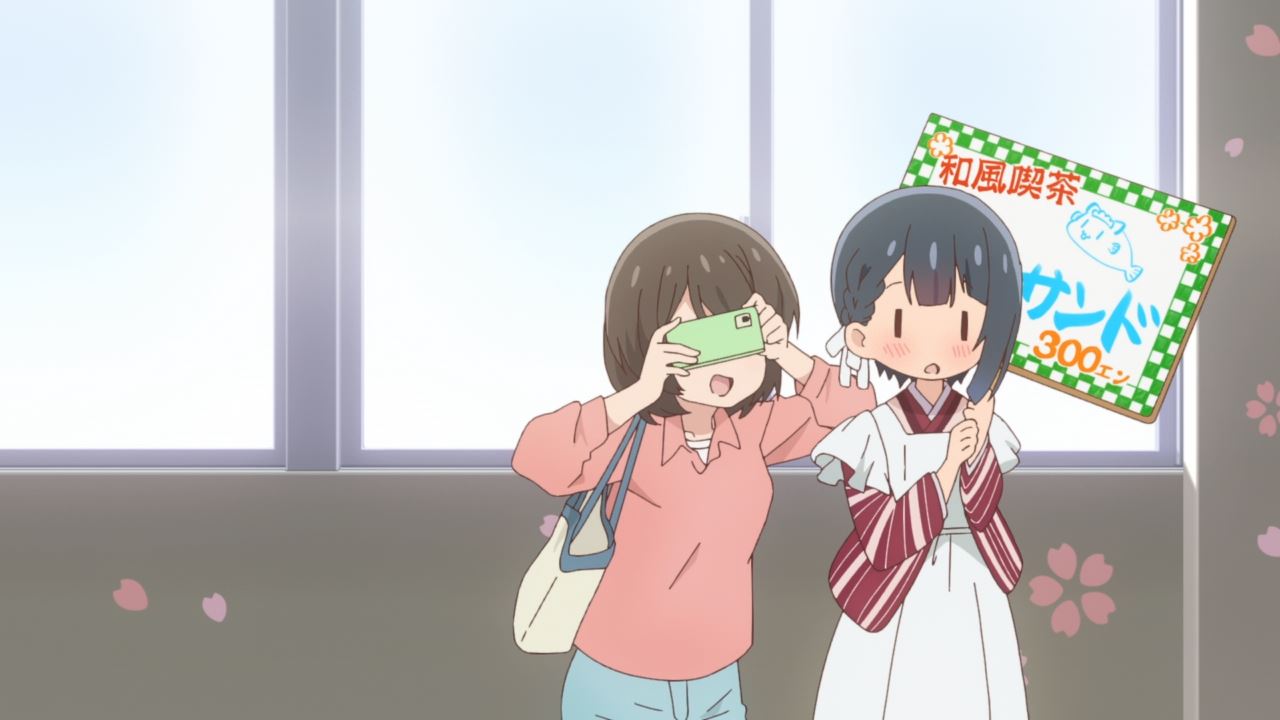 Speaking of a café, it appears that Hiyori’s class held a Japanese-style café where Hiyori’s mother Hinata is really excited to see her in a uniform.

Of course, who’s gonna cook the meals since Koharu is really busy with her exhibit? 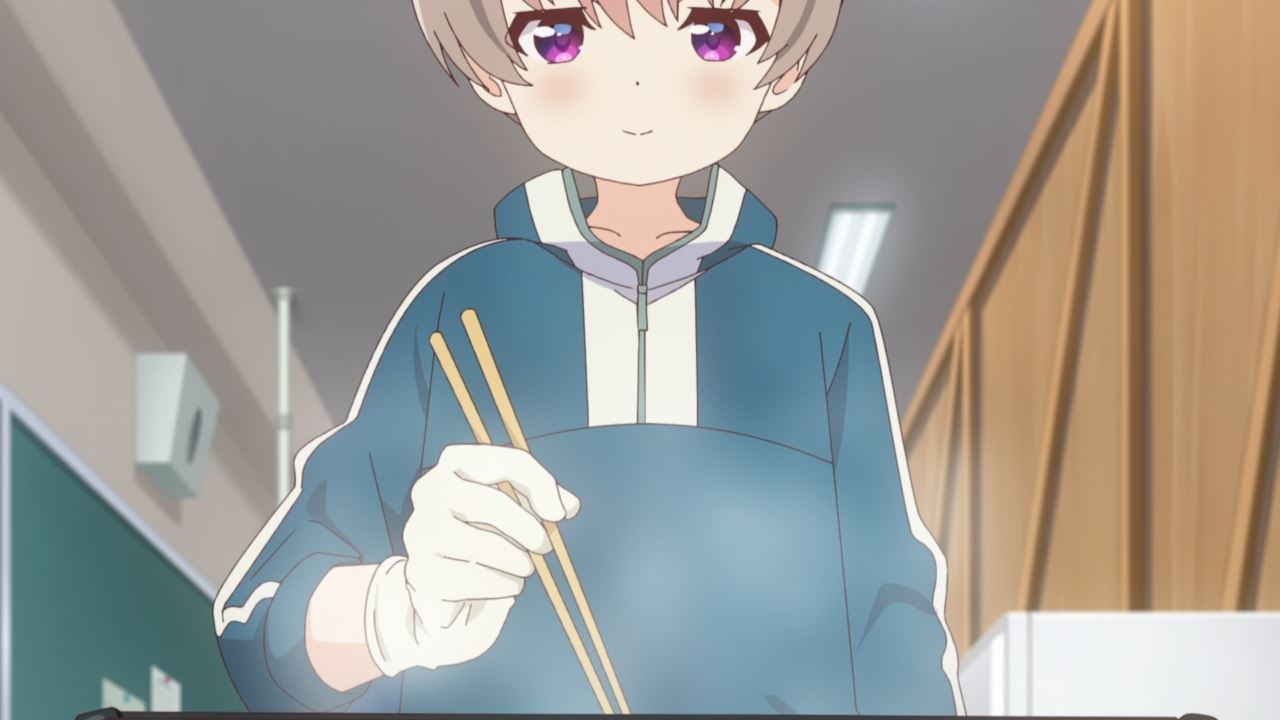 Oh, it’s Koi Yoshinaga where she cooks a mackerel that was marinated overnight. Now I’m curious on the finished product. 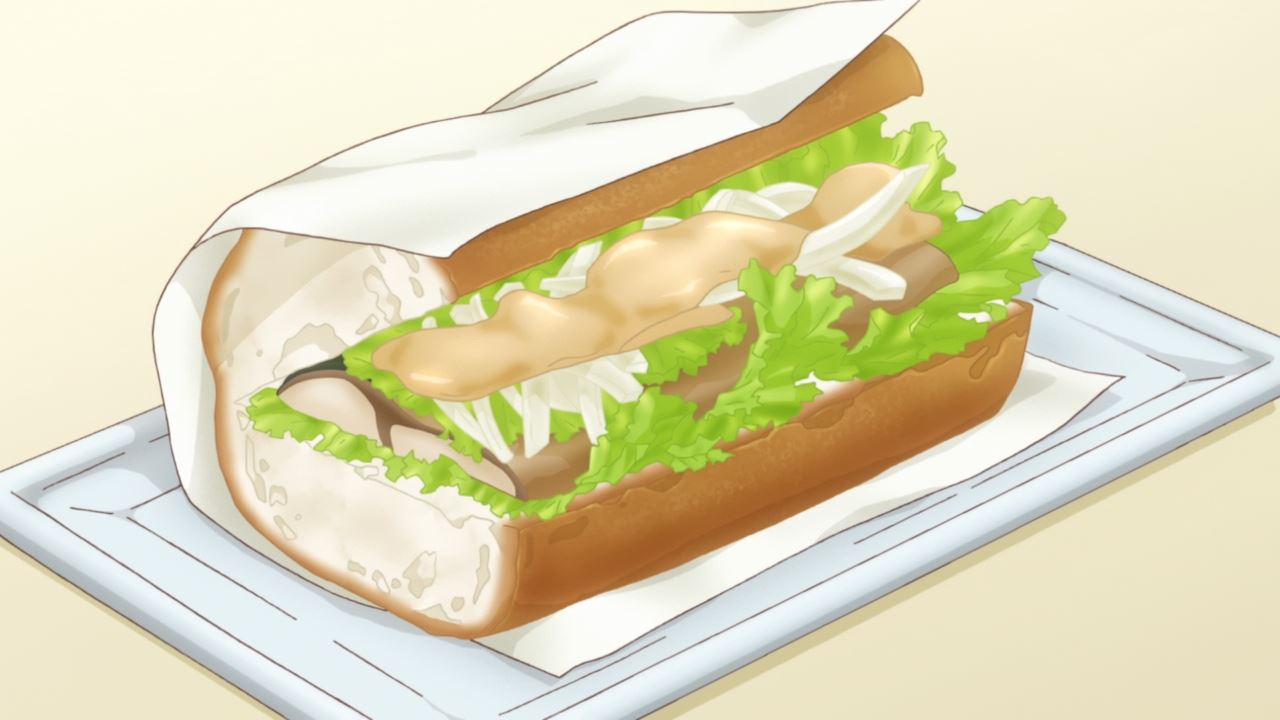 Well, it appears that Koi made some delicious mackerel sandwich. Let’s see how it tastes like? 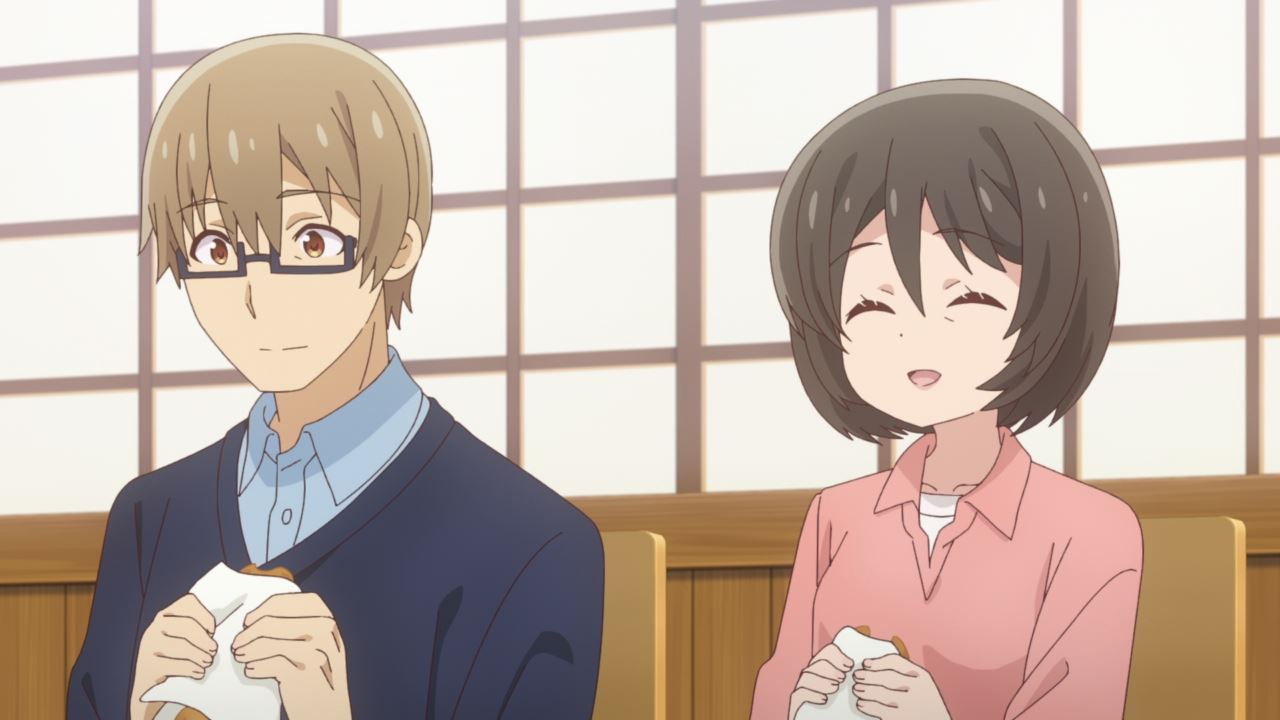 Judging from their reaction, Issei-san and Hinata-san love it as the mackerel sandwich is really delicious. Kudos to Koi-chan for making both sandwiches. 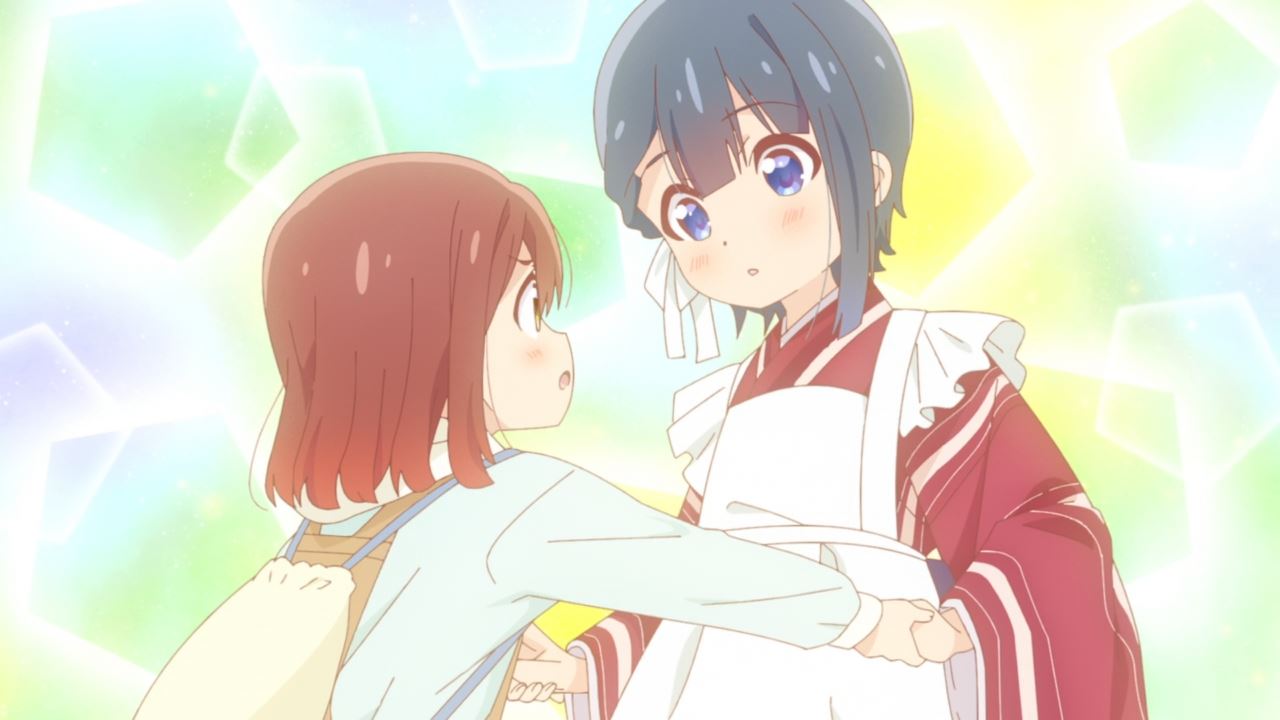 One last thing, looks like Futaba visited Minami Kana High School where she wants Hiyori to go to another fishing trip by themselves.

From the looks of it, it appears that Futaba-chan is proposing to Hiyori and man, she’s getting a bit daring lately! 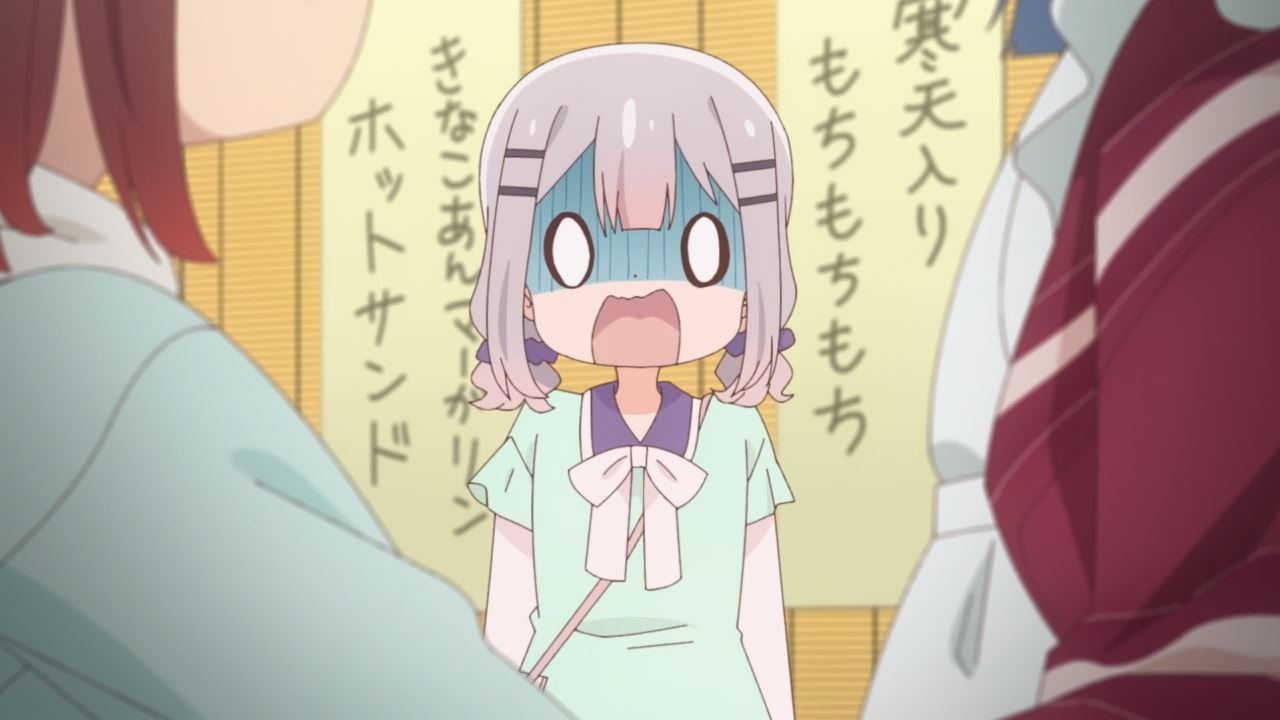 Heck, even Aiko-chan is really shocked to see her friend making a proposal. But that’s about it for this episode where Minami Kana High’s school festival was a success, although Koharu’s parasite exhibit was a bust.

Of course, there’s two more episodes to go where I’m gonna miss this show. Anyways, see ya next time!