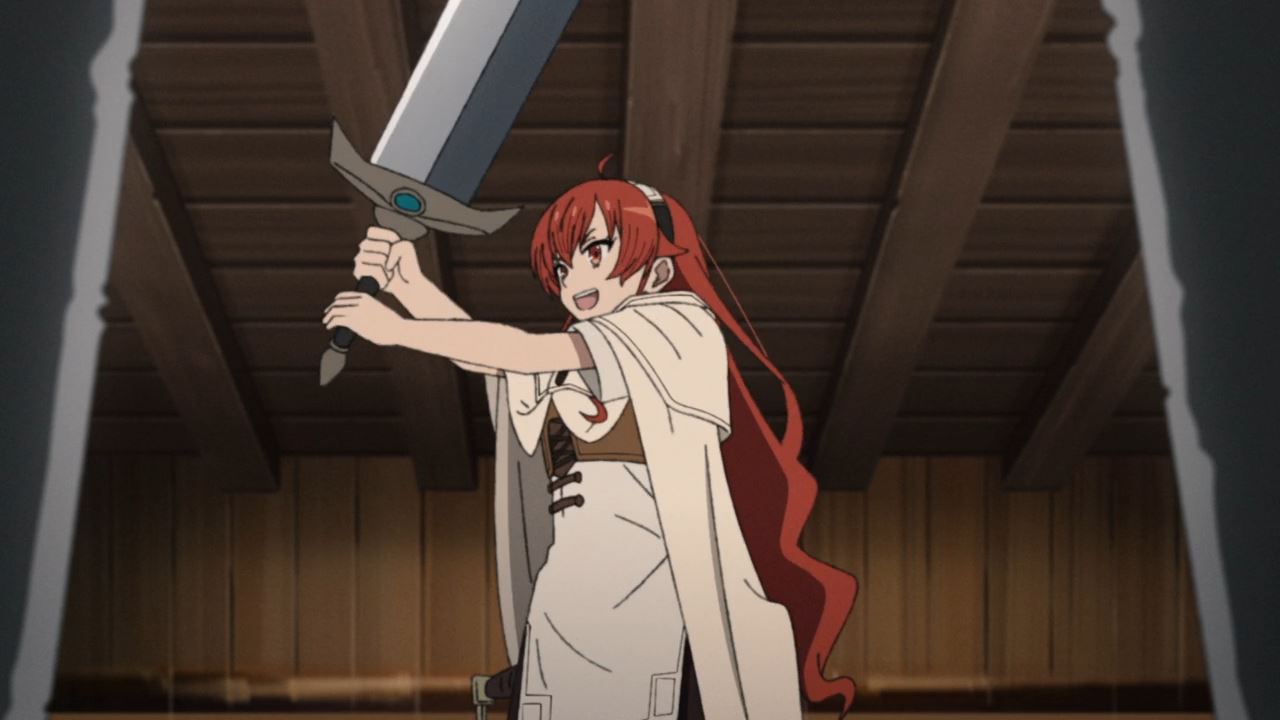 Hey everyone, it’s time for a special episode and while Rudeus Greyrat is about to meet his long-lost father Paul, you have Eris Boreas Greyrat where she buys a sword to hunt some goblins. C’mon, she needs to earn some money for the ferry. 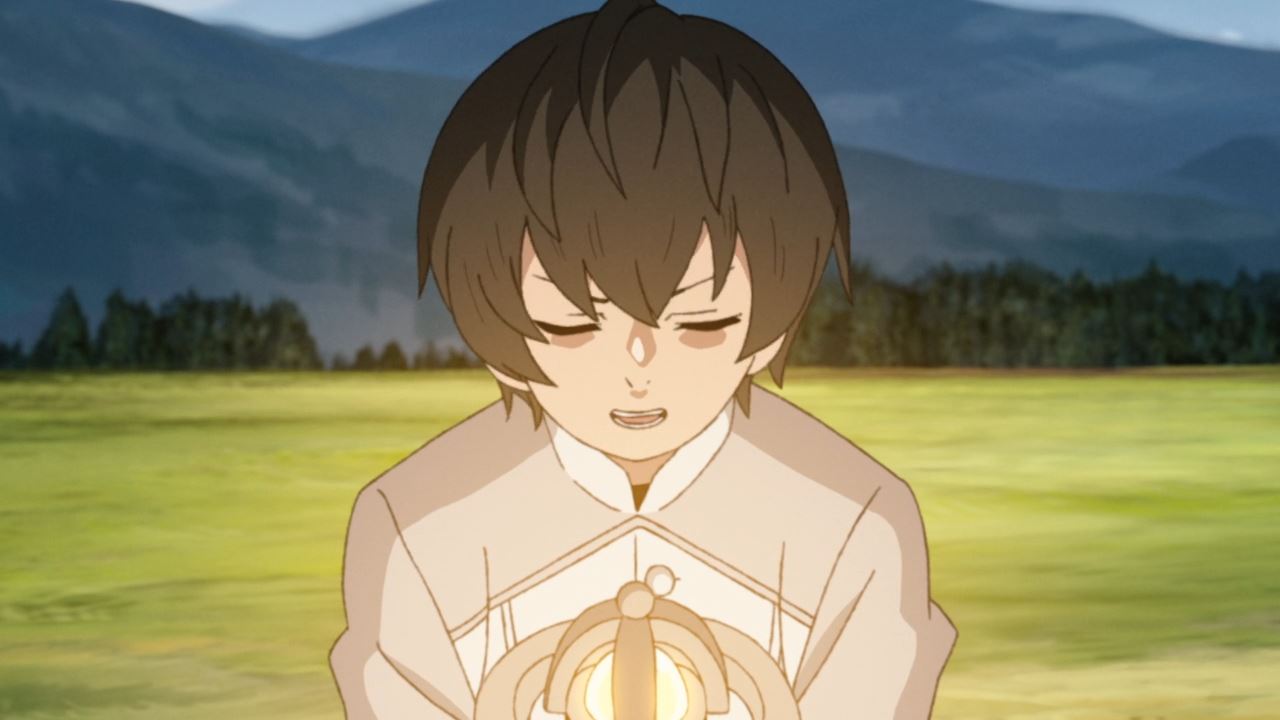 Meanwhile, let me introduce you to Cliff Grimoire, the son of the current pope and a promising sage who will succeed as the next pontiff in the Millis Religion.

Unfortunately, Cliff has some attitude issues where he’s arrogant due to his advanced magic skills. Um Cliff, you should exhibit some piety just because you’re talented. 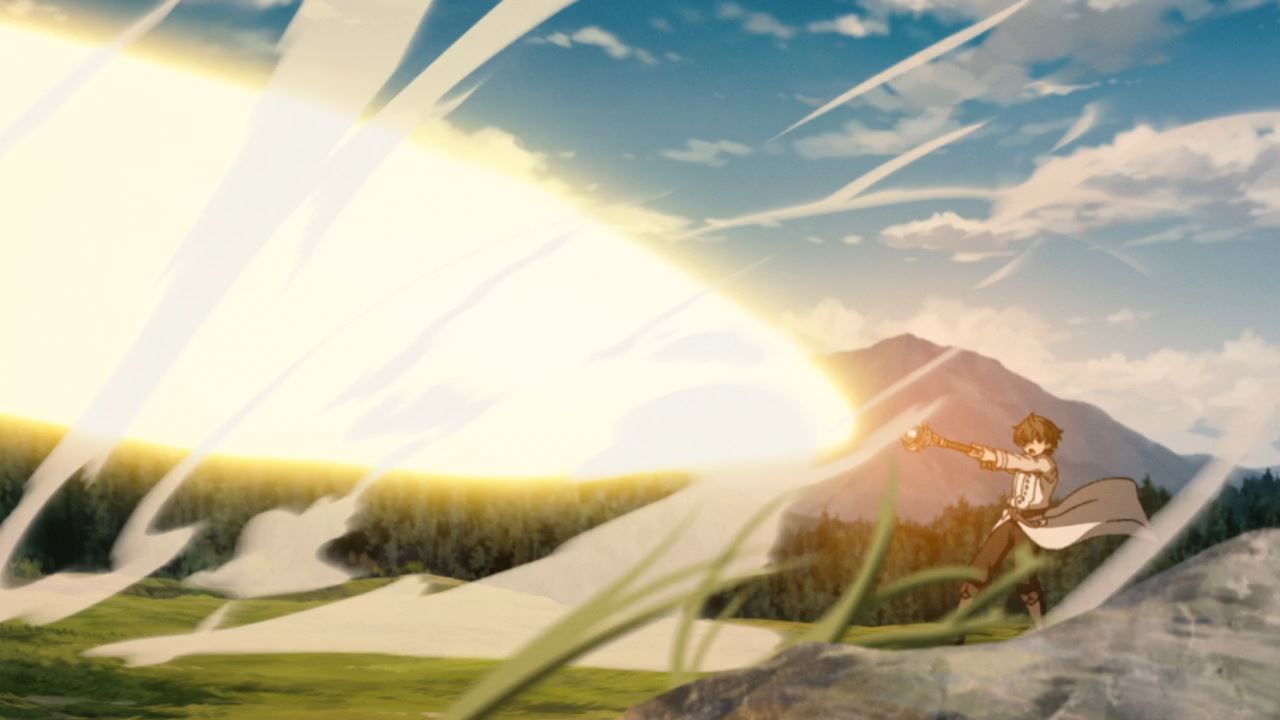 Anyways, Cliff Grimoire joined Eris Boreas Greyrat where he wants to assist her, despite the fact that she can hold out on her own.

But that doesn’t stop Cliff from casting Exodus Flame, an advanced-level fire magic that can obliterate monsters in seconds. 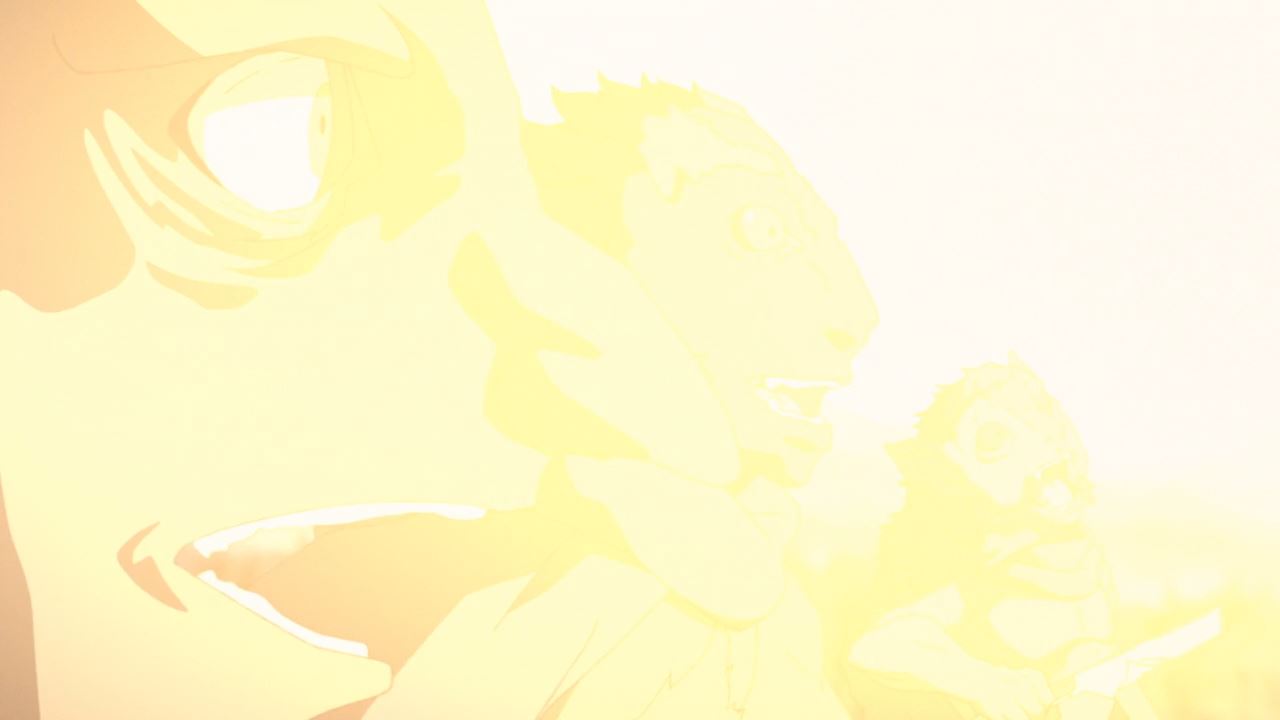 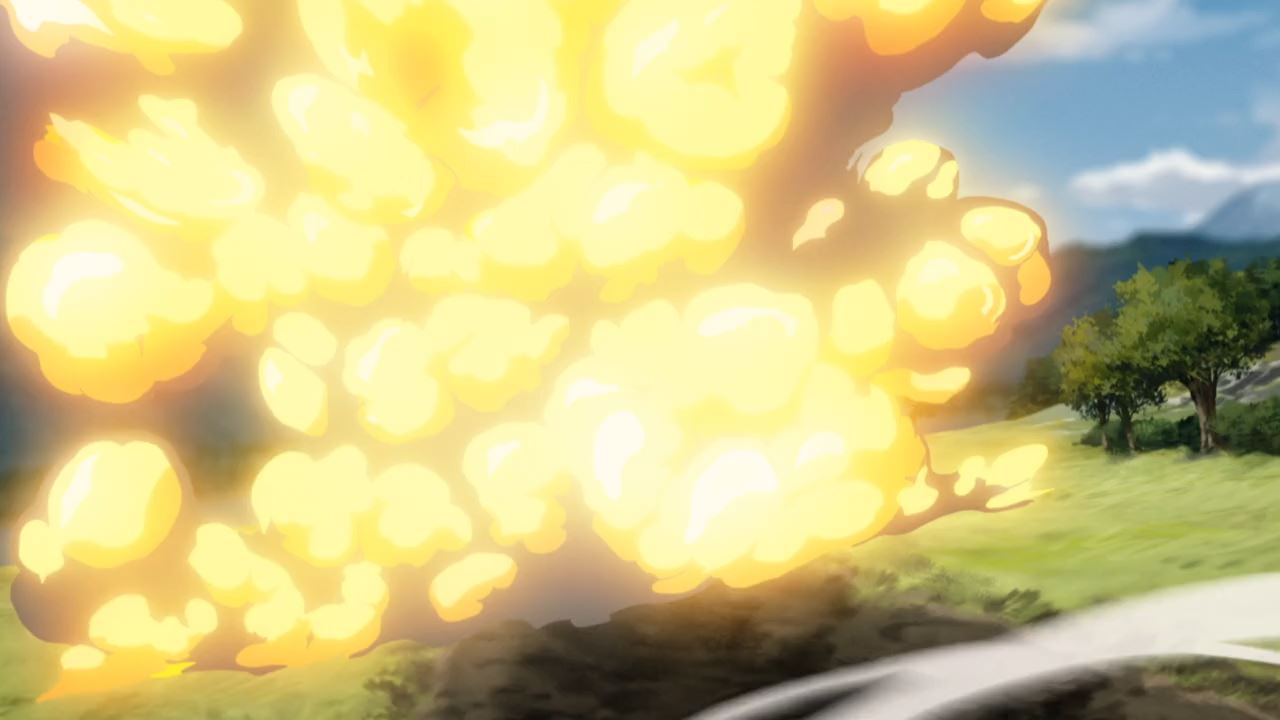 And as you can see, they’re history thanks to Cliff’s amazing magic. Very impressive, right? 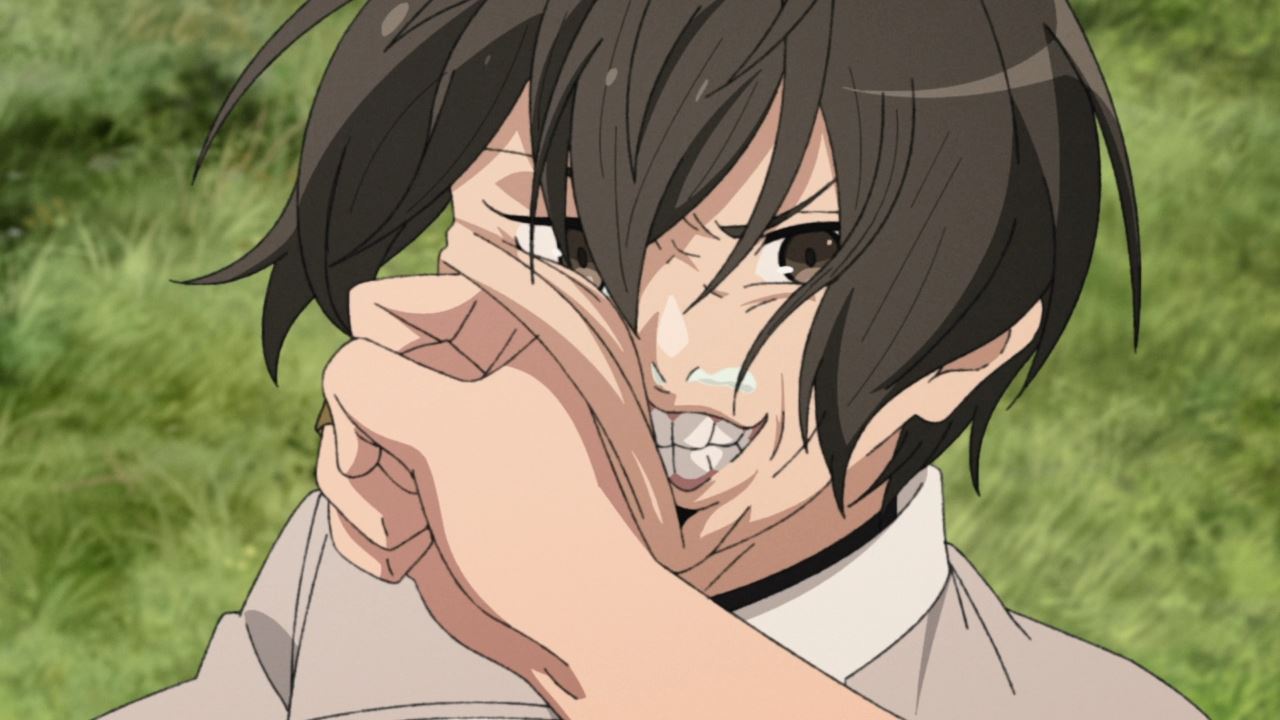 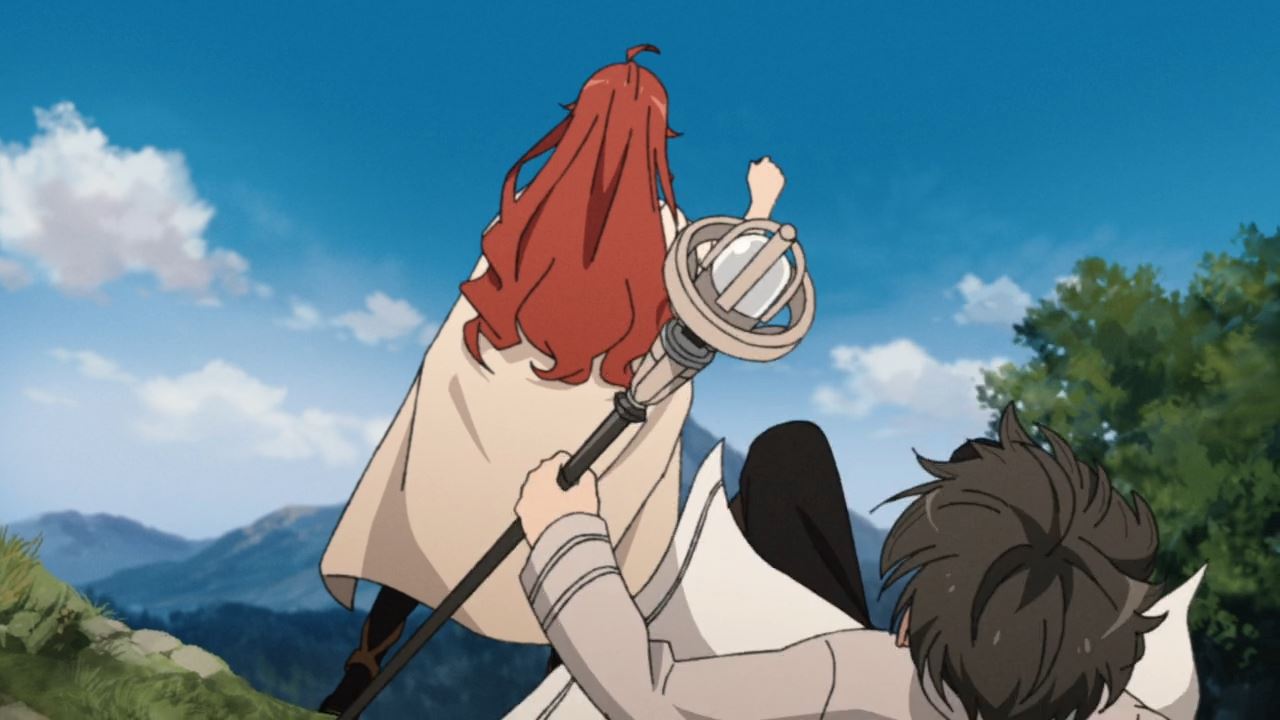 Well, not for Eris where she gave him a nasty backhand to the face. In her eyes, Cliff is not only annoying but she almost died from his Exodus Flame had Eris dodge that.

Regardless, looks like Eris will have to carry the pope’s son in her quest to kill goblins for gold. 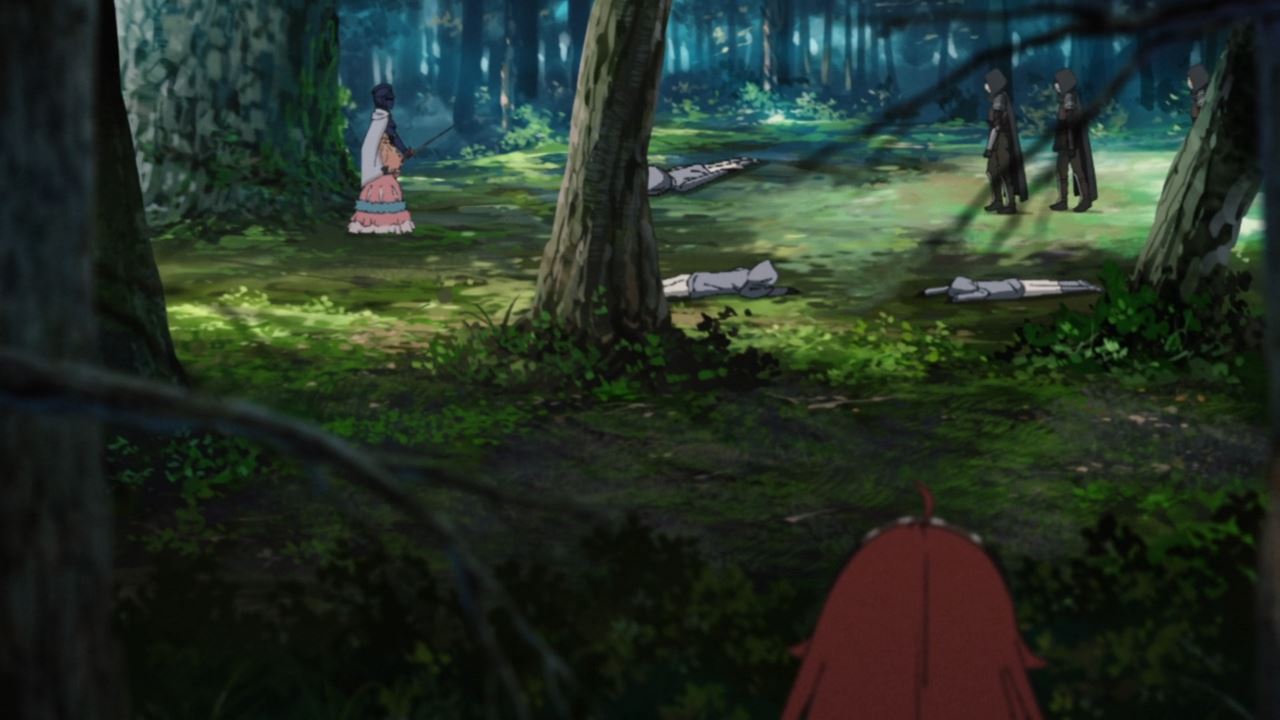 Unfortunately, they got lost and not only that, but they encountered a Temple Knight who’s protecting a little girl from a group of assassins. 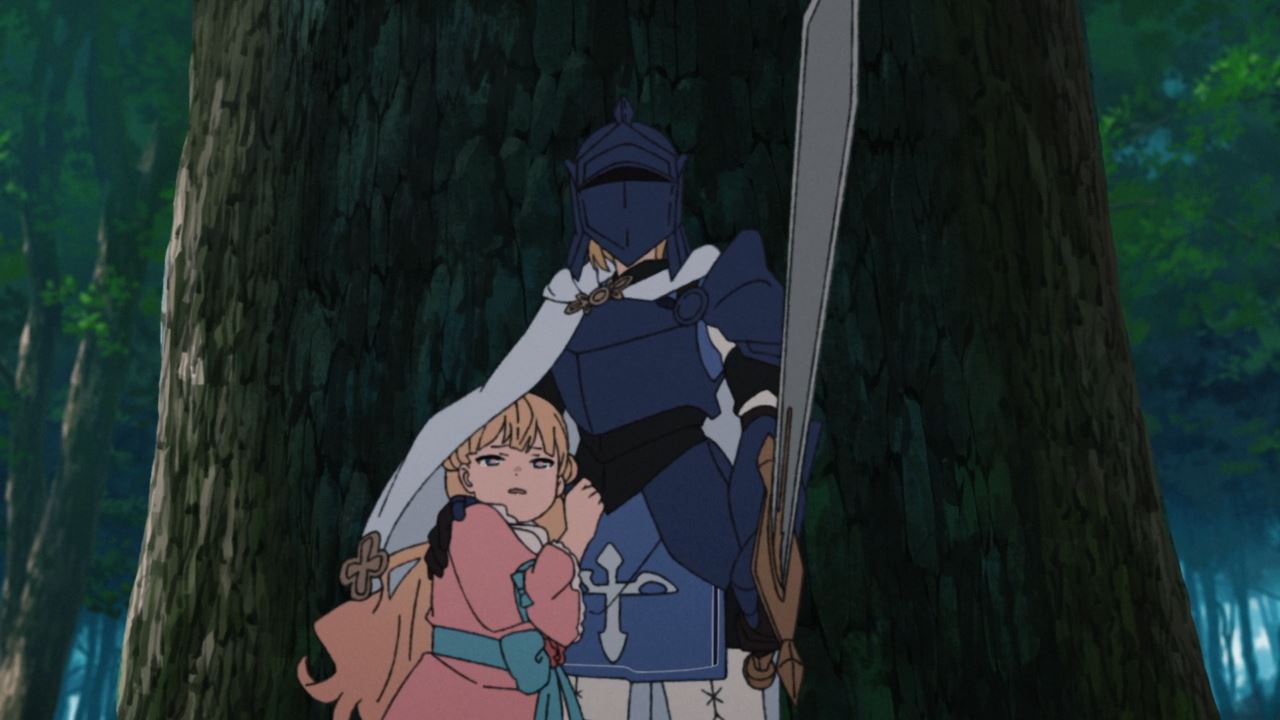 Speaking of those assassins, I have a bad feeling that they’re working for someone as they don’t just kill people randomly. Anyways, looks like Eris and Cliff will have to get out of the forest.

Except that Eris decides to cleave those assassins away. Damn, I’m really impressed that Eris managed to cut them cleanly and I thanked Ruijierd Superdia for making her into a fine swordswoman. 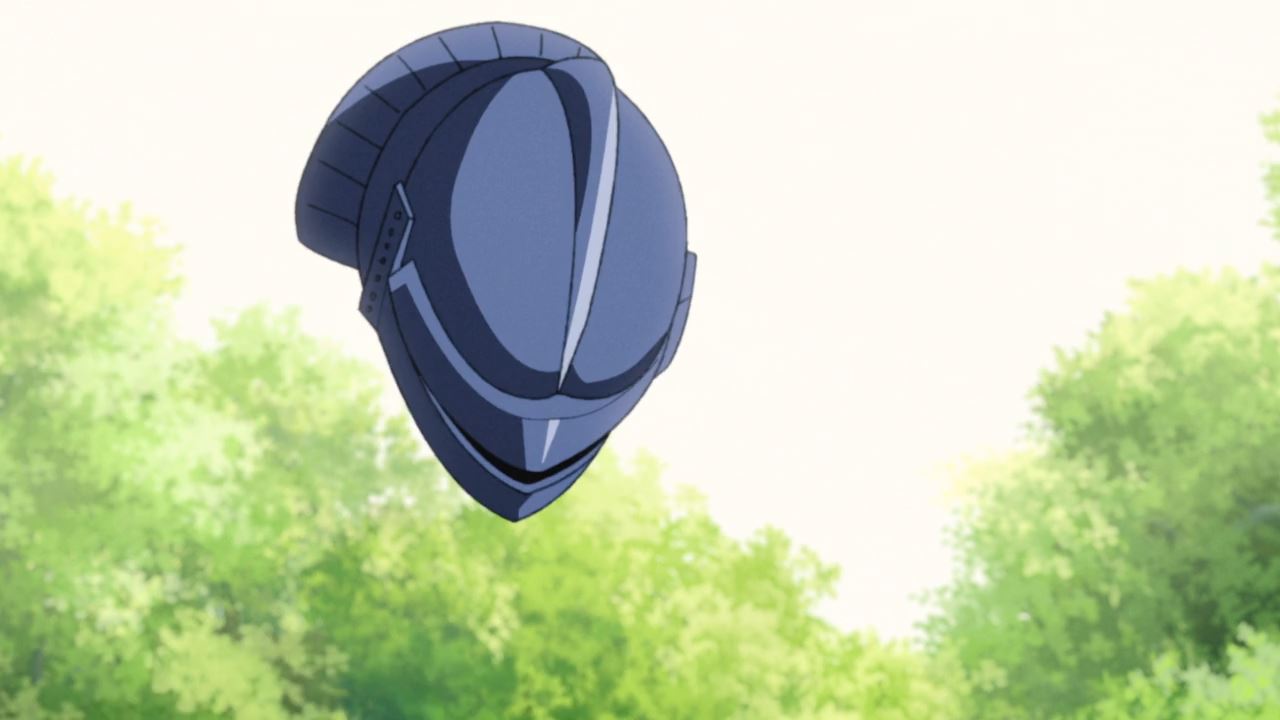 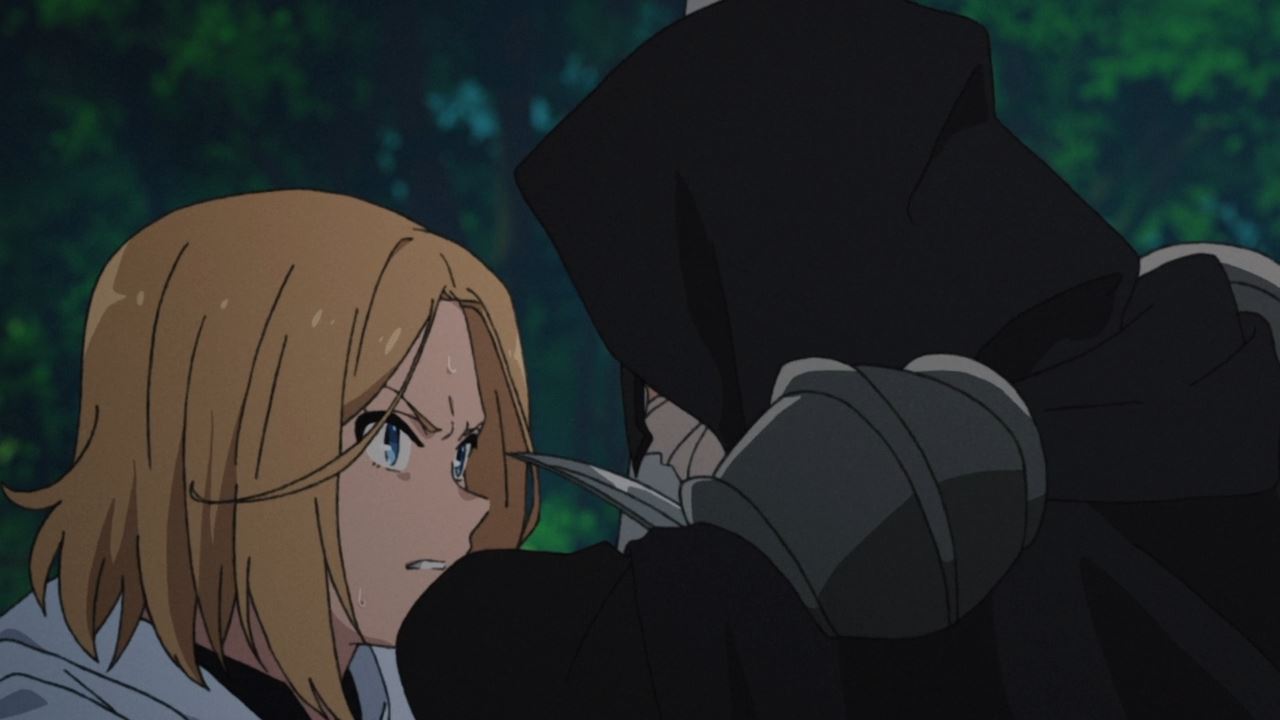 Of course, we have to focus on the surviving Temple Knight where the helmet has come off, revealing to be a woman. Rudeus would gladly protect her alright, but he’s not here at the moment. 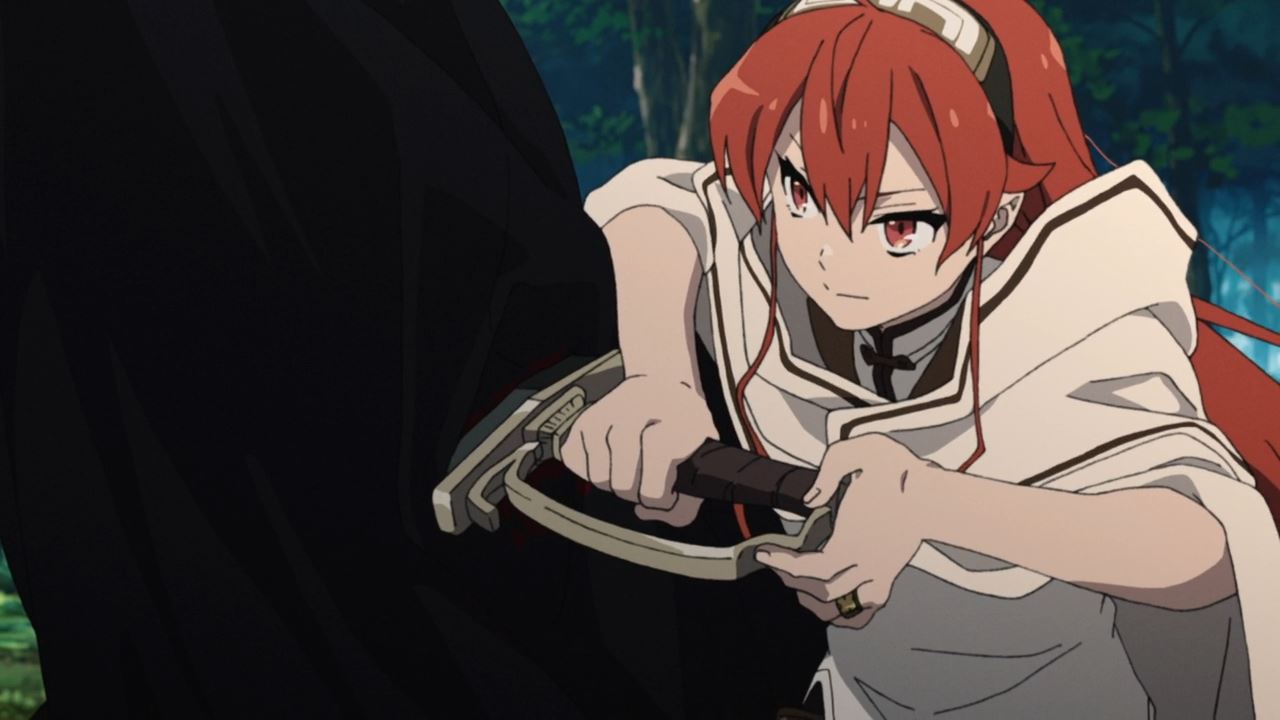 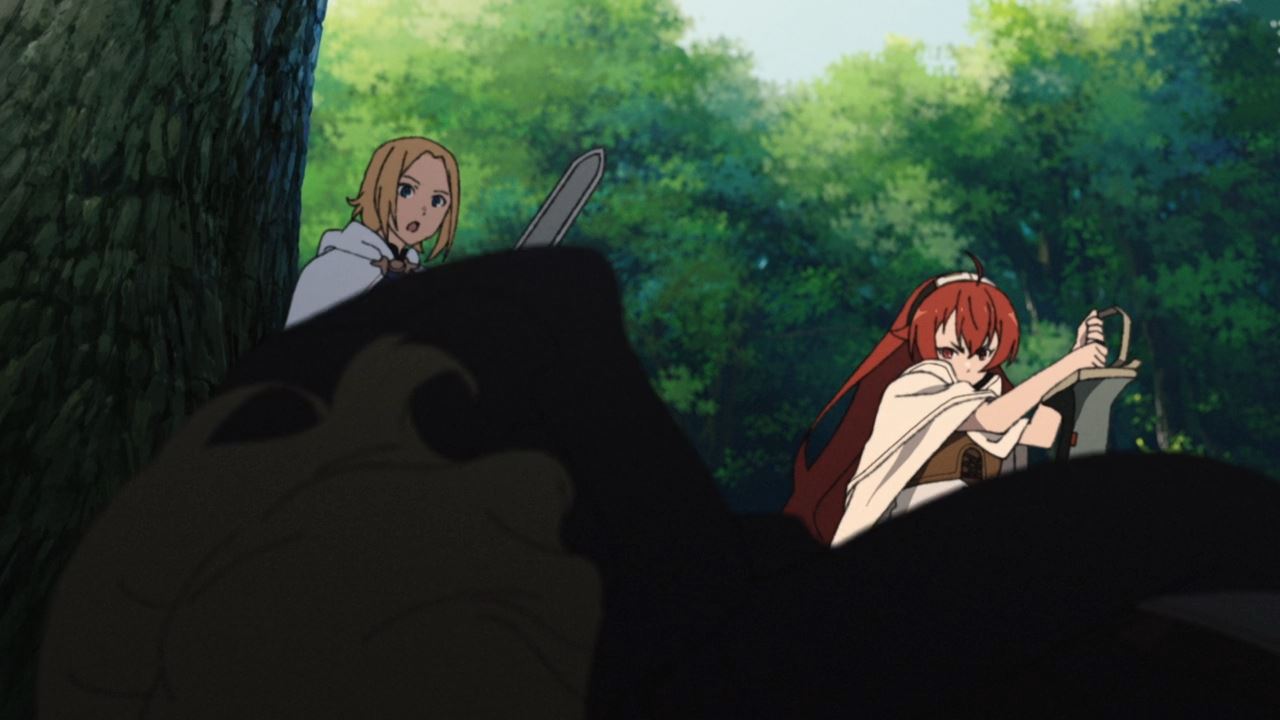 With that said, Eris killed most of the assassins as she managed to save the Temple Knight and the girl. Way to go there, Eris! 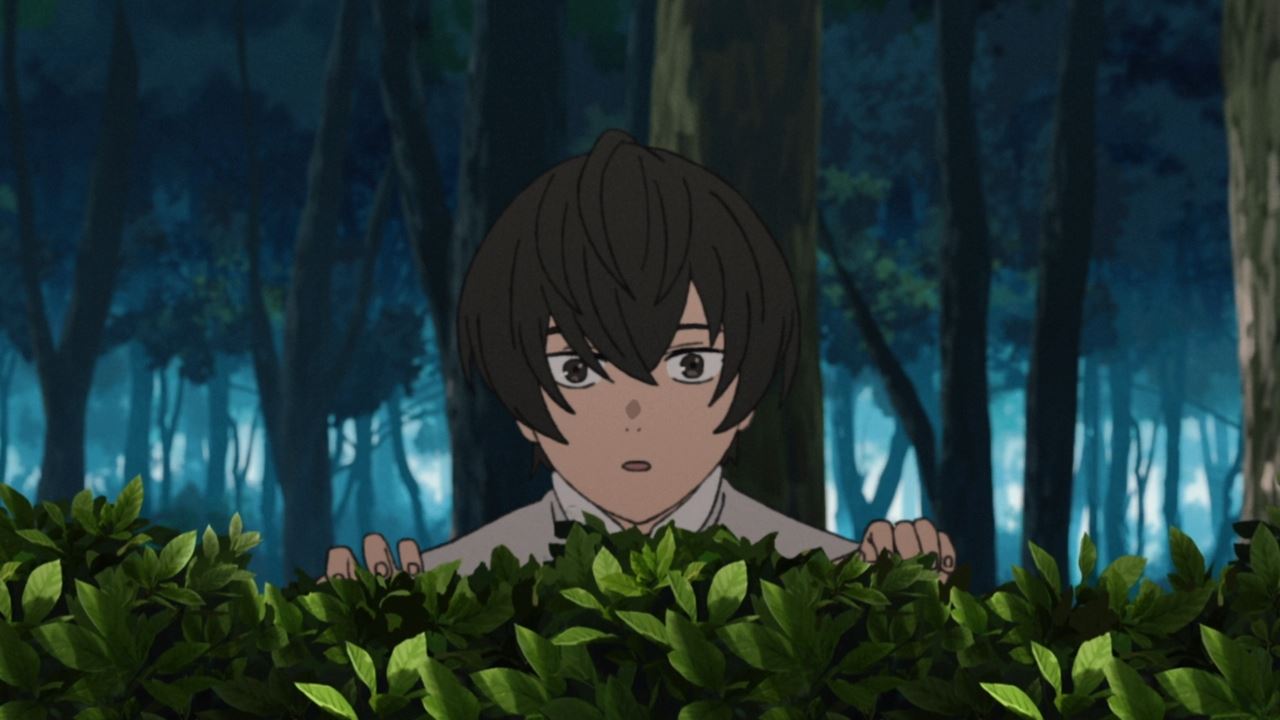 Meanwhile, looks like Cliff is smitten by Eris’ bravery that he’s really in love with her. Then again, I feel that it won’t happen anytime soon. 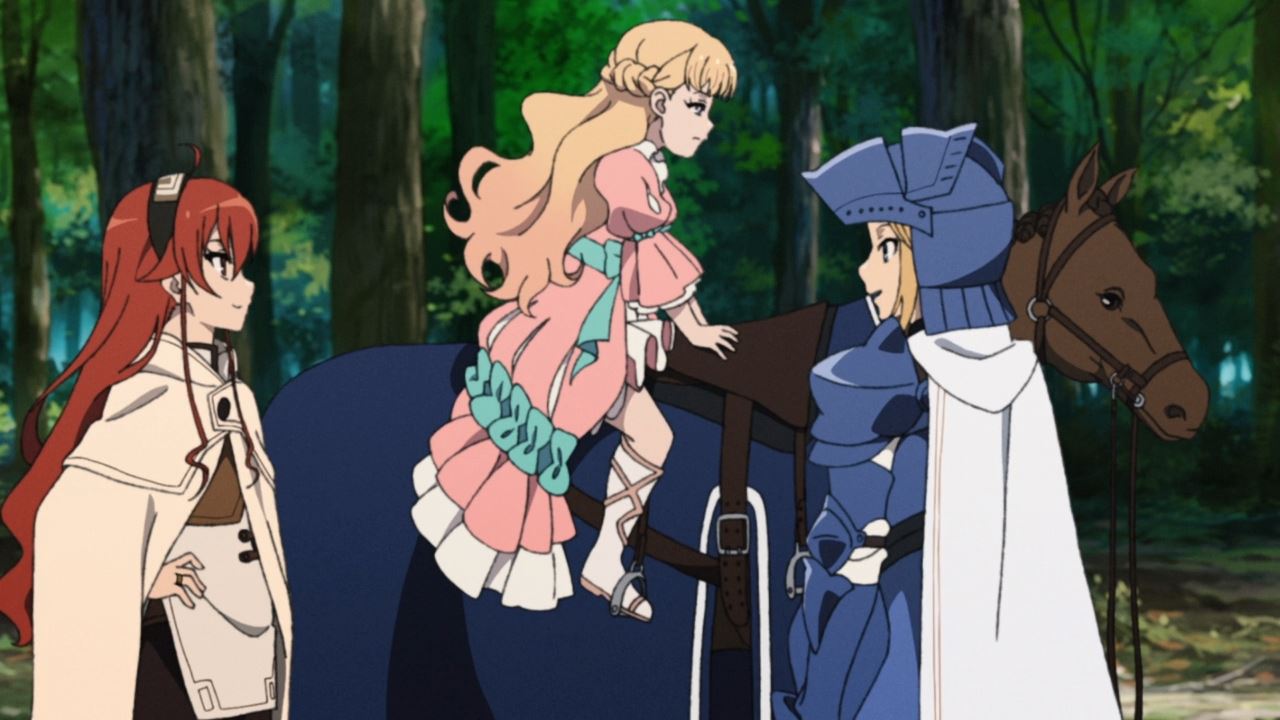 For now, the Temple Knight will guide Eris and Cliff back to the city. As for her quest to kill goblins? Well, Eris got a few goblin ears that she can exchange it with gold coins. 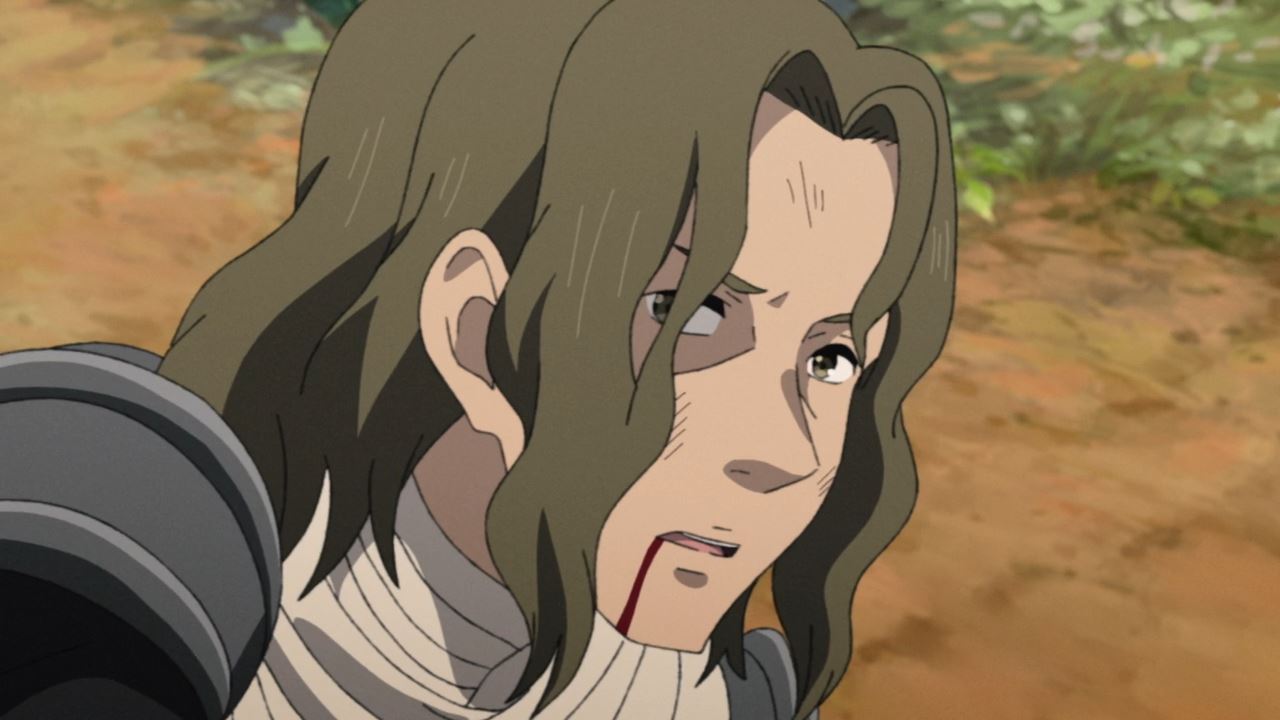 Oh yeah, I forgot to tell you that there’s one surviving assassin where he might kill Eris and complete his mission, although he’ll encounter a certain Superd. 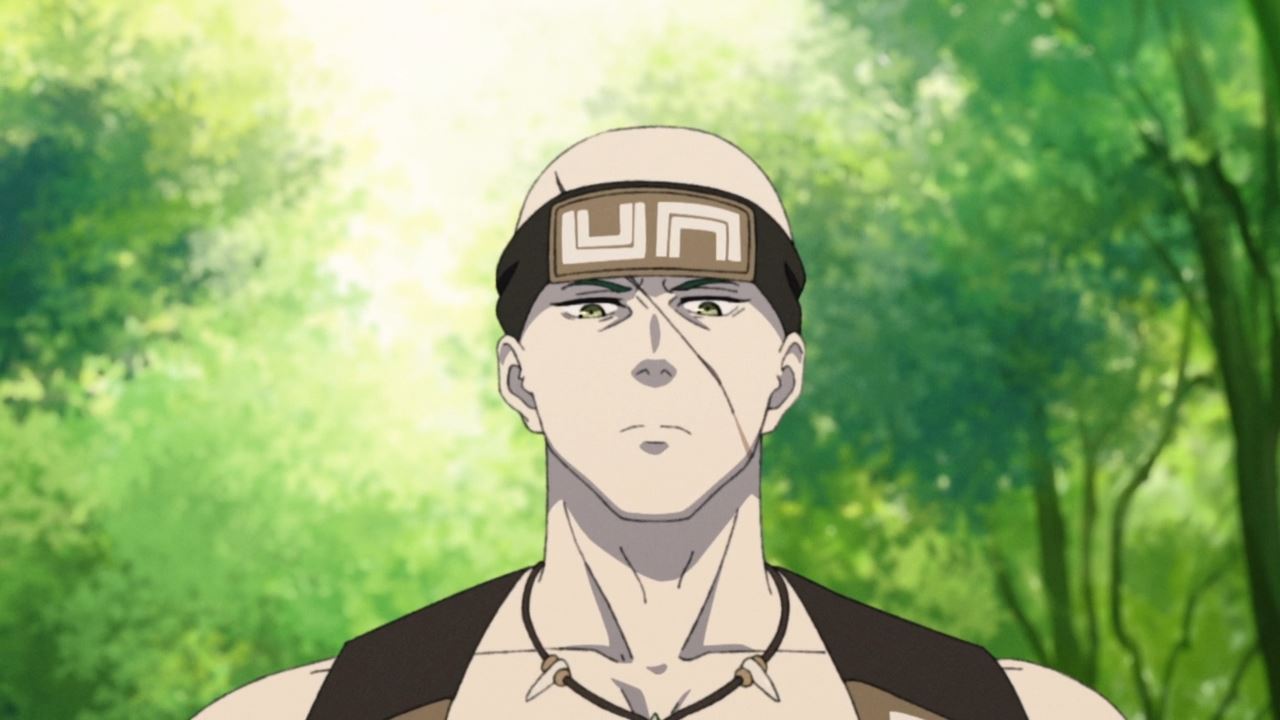 Yup, it’s Ruijierd where he’s gonna deliver the final blow to the assassin, but not before he told the Superd on his reason for attempting to kill the young girl ’cause she might be one of the blessed children who might become the next pontiff in the future.

Furthermore, another reason for carrying out the mission is because his faction hates the pope’s policy of coexisting with demons. Hmm, I have a feeling that the internal strife within the Millis Religion might be explored later. 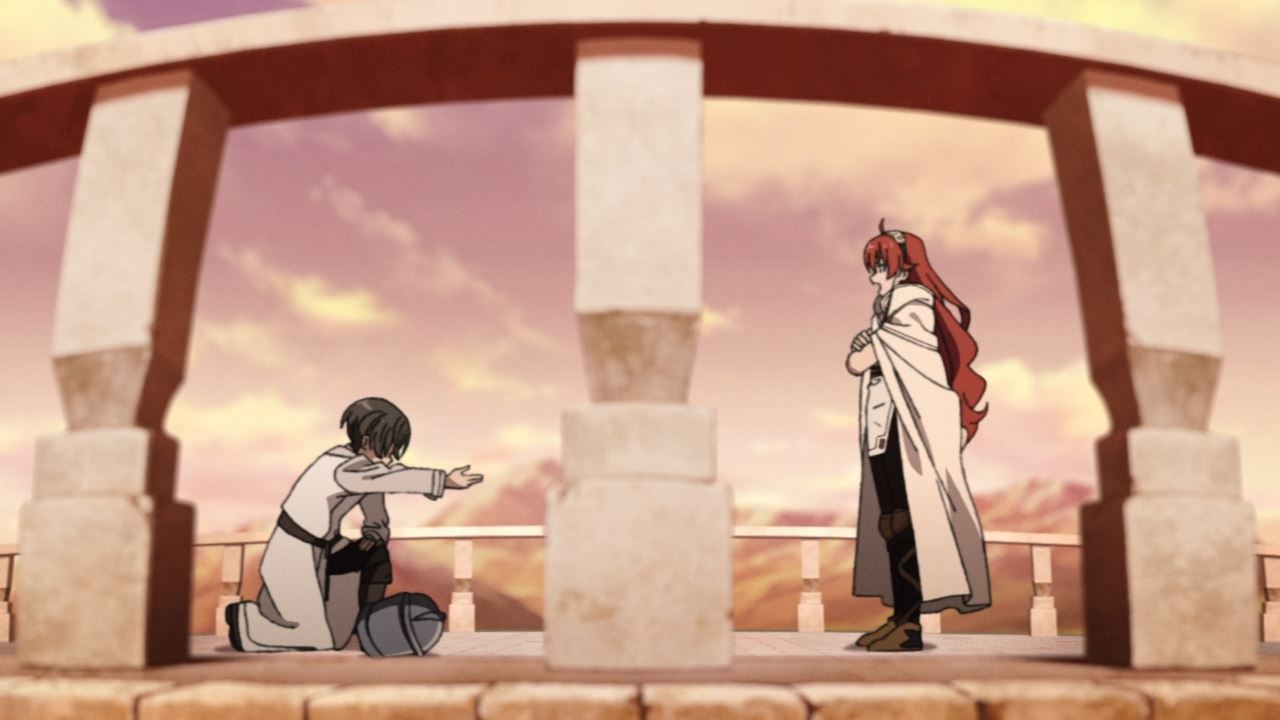 One last thing, looks like Cliff Grimoire wants to marry Eris Boreas Greyrat for which she flat-out rejected him. Yeah, I’m not surprised with Eris’ decision to be honest.

While Cliff can cast advanced magic since he the pope’s son, Eris prefer Rudeus where he’s way more talented and not to mention that he’s a kind man despite being perverted. 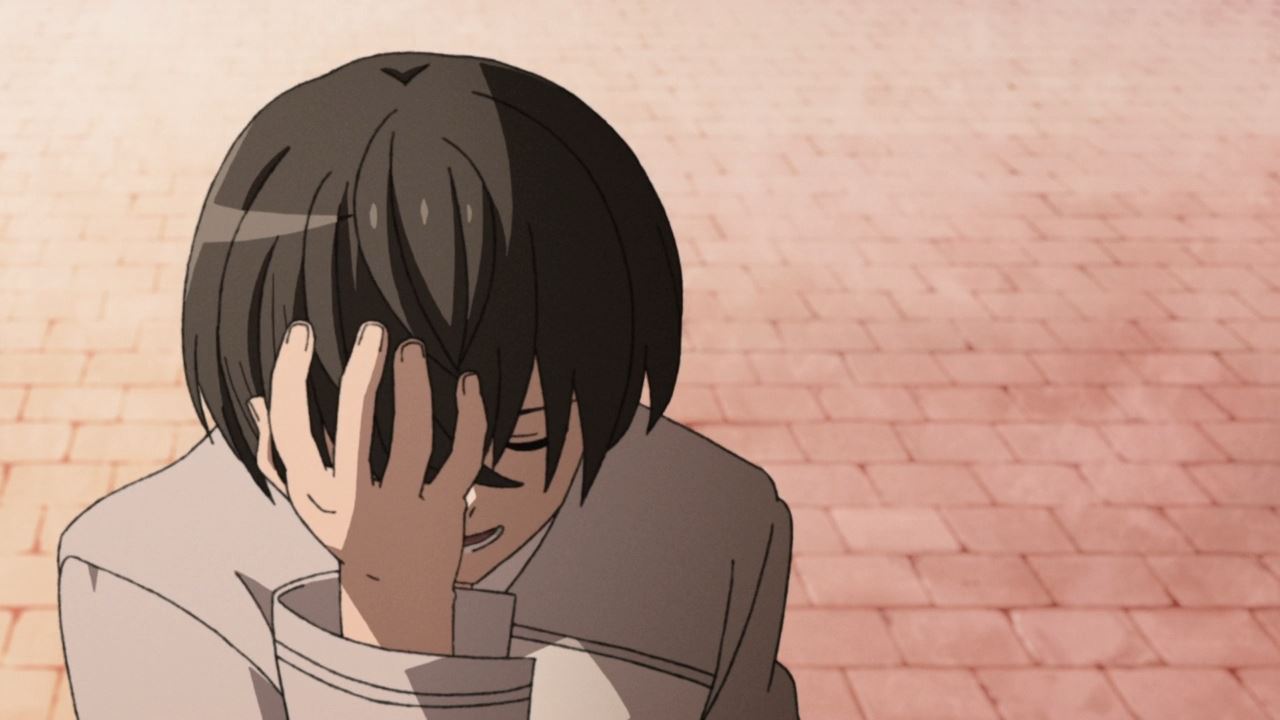 For Cliff Grimoire, this is unforgivable as he wants to settle with Rudeus in the future to see who’s suitable to take Eris’ heart. Sadly, both Rudy and Eris already did the deed back in Episode 22, although Eris left him to train harder.

And by the way, Cliff is not the pope’s biological son as it turns out that he was adopted after his real parents were killed. Whether the previous pope ordered the murder of Cliff’s parents, or some group of bandits who raided a peaceful village, we’ll never know for sure. 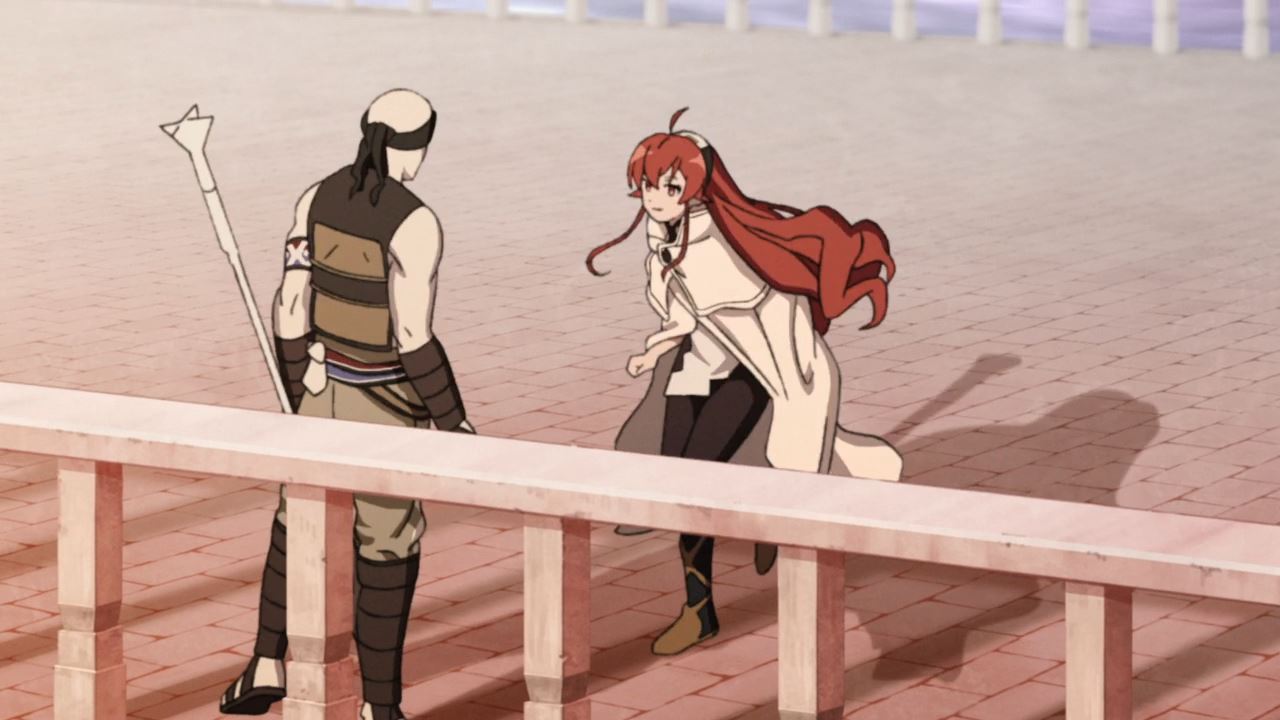 But that’s the end of the special episode and I feel that Eris’ future has finally set in stone, one where she’ll become a powerful swordswoman in the future. For now, the only thing she needs to do is to comfort Rudy where he’s really depressed after meeting his father for a long time.

Of course, there’s no need to wait for long as another season is in the works. Looks like Kadokawa are in for a long haul on Mushoku Tensei where they’ll turn into one of the greatest multimedia franchise in this decade.