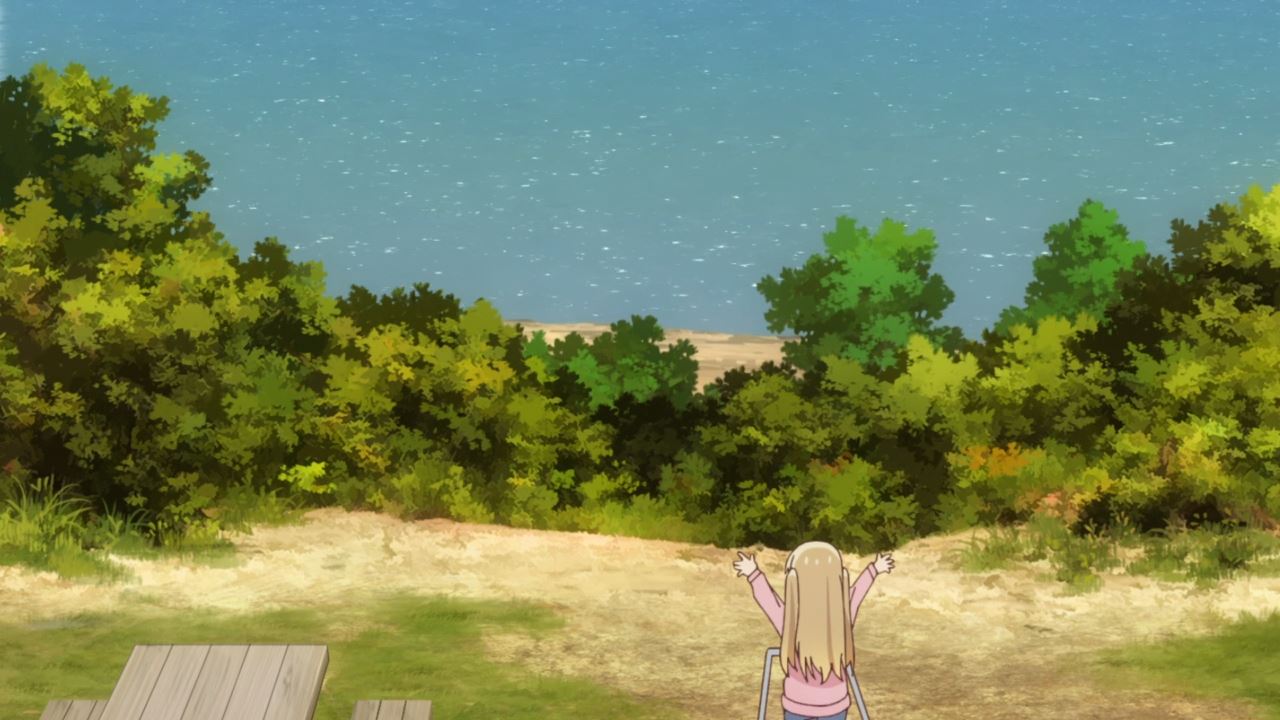 Welcome to the penultimate episode of Slow Loop where the Minagi family (sans Issei-san), the Fukumoto sisters, Koi and Reiko Yoshinaga, Aiko Ninomiya, and Kaede Miyano will have a camping trip near the lake.

And seriously, it’s the most picturesque spot where they can see the lake clearly. Just kidding, I don’t think they’ll set up camp near the lake but this place is amazing! 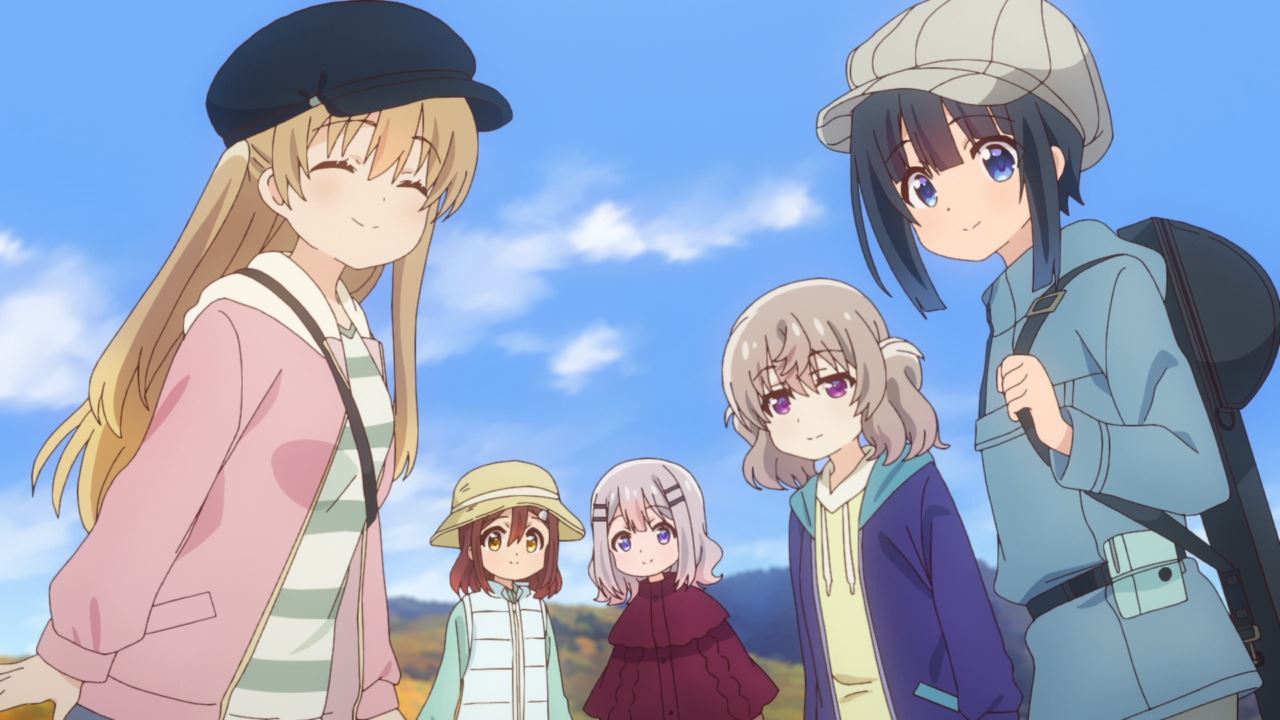 Now then, here are the girls where they’ll head to the lake for some fly-fishing. Let’s hope that they catch some for dinner. 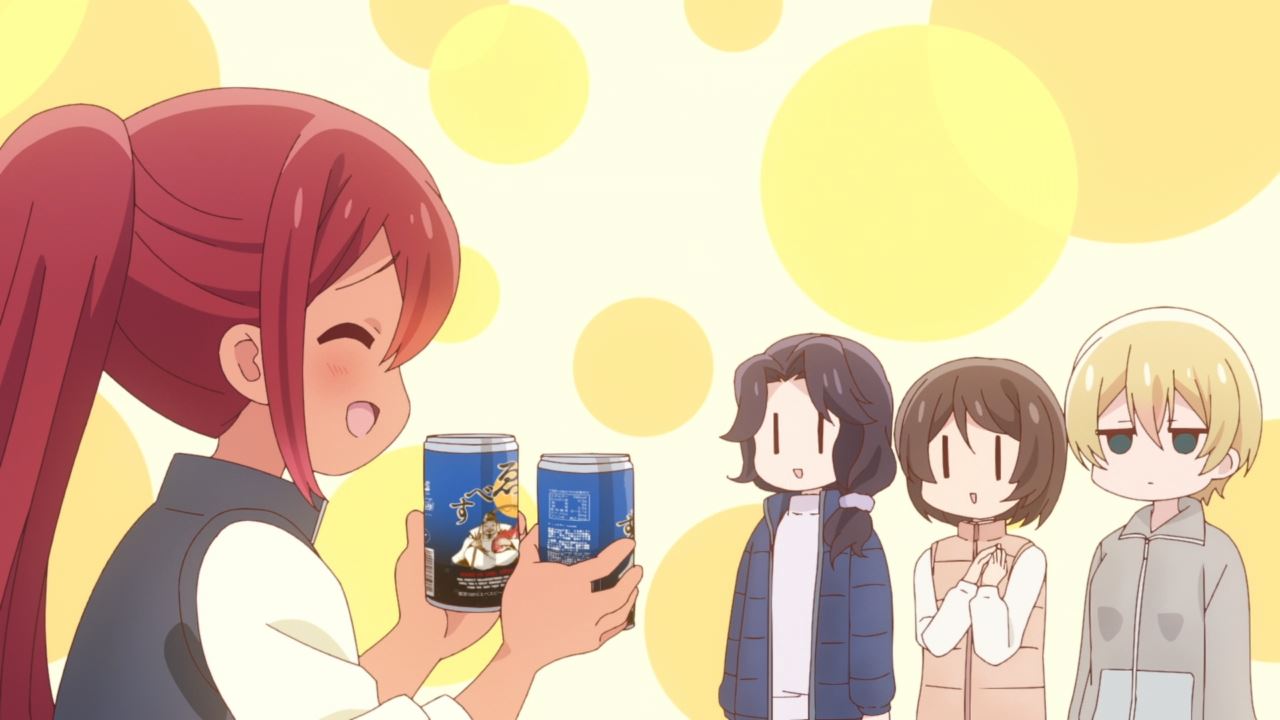 As for the adults, looks like they’ll have a party tonight where Ichika offered a can of beer to the ladies, although I’m hoping that they won’t drink much. 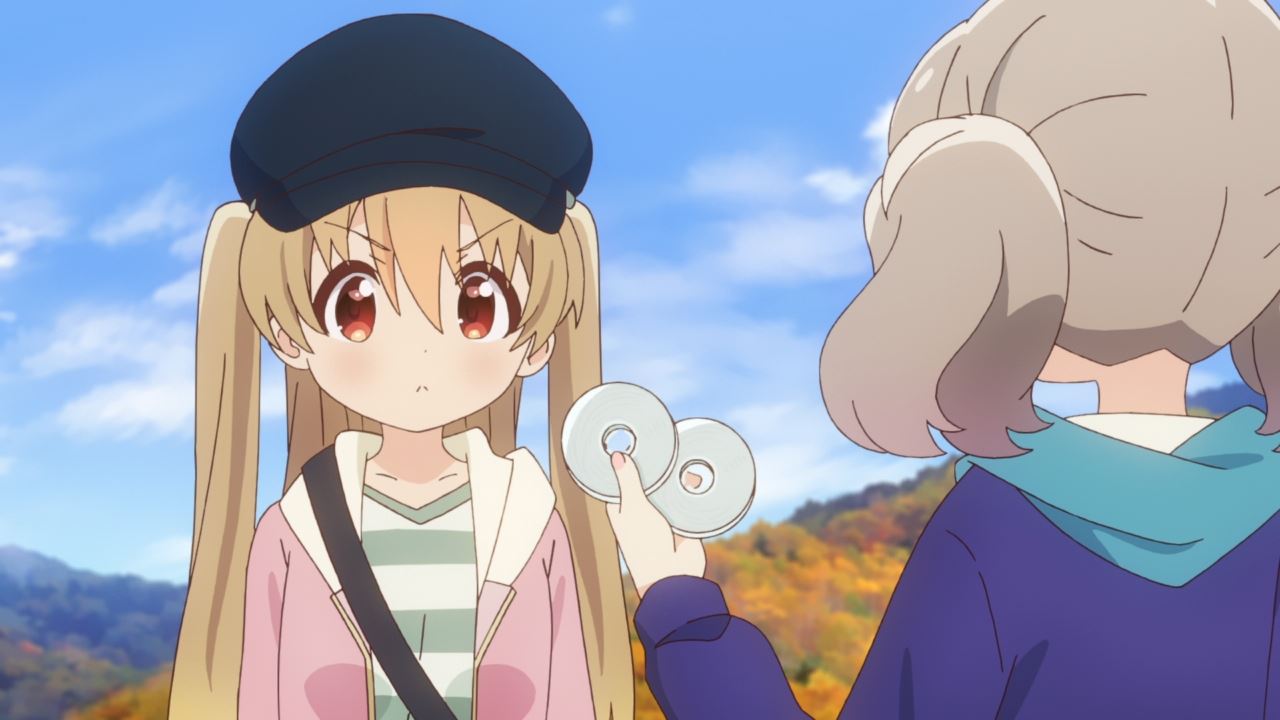 Now then, let’s begin with a lesson from Koi Yoshinaga where despite not being a crazy angler like her father Ryouta-san, Koi-chan is knowledgeable when it comes to providing tips like choosing the right line when catching a rainbow trout. 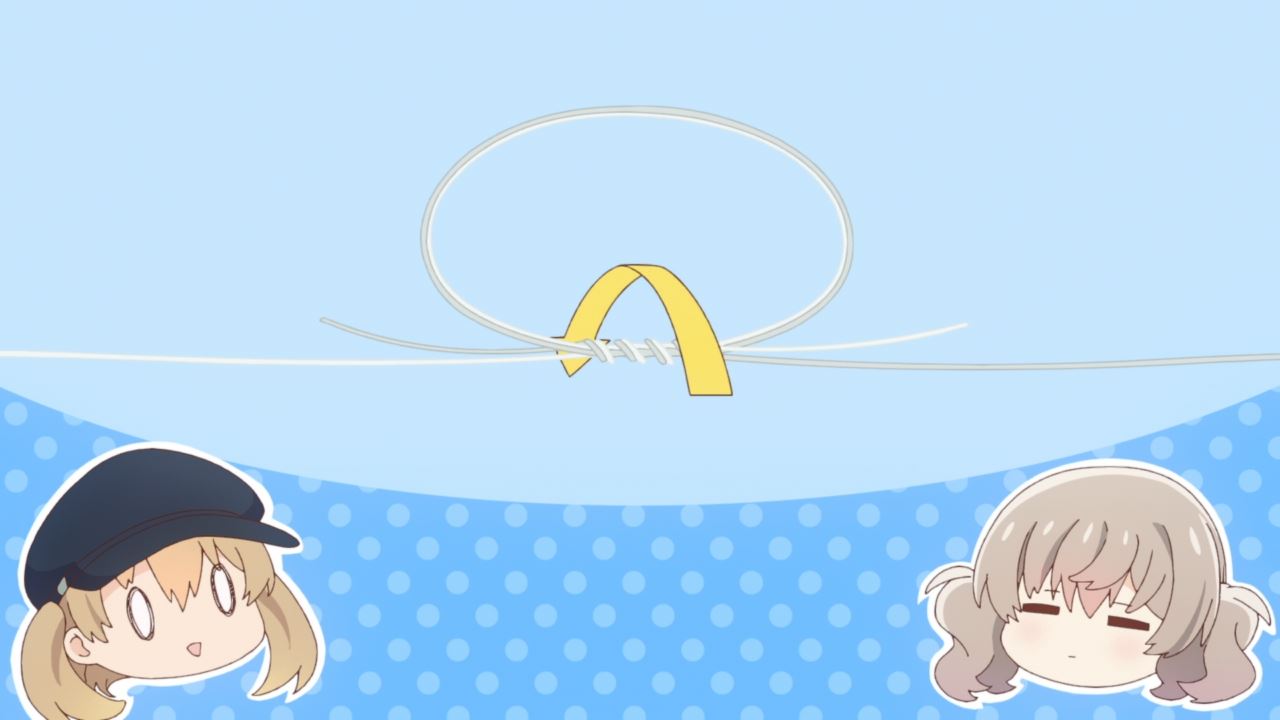 For Koharu Minagi, she was stunned that she needs to learn more in order to master the art of fly-fishing. Well, good luck for Koharu-chan then! 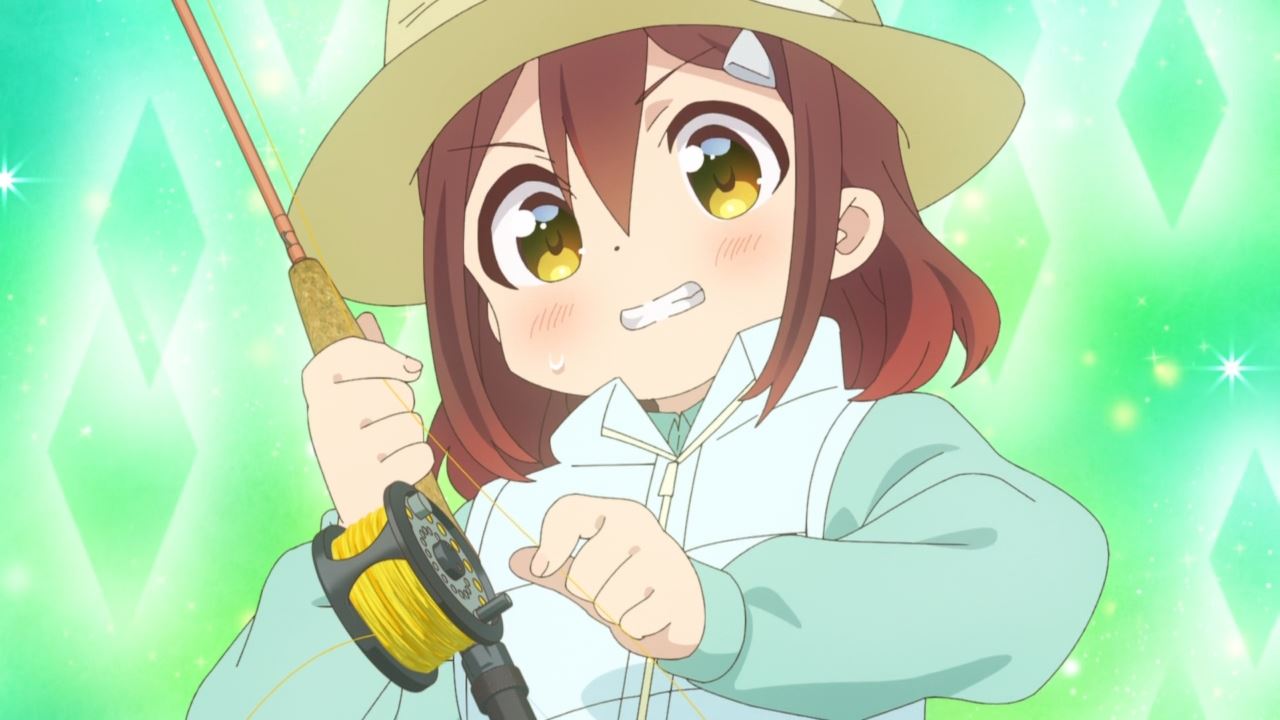 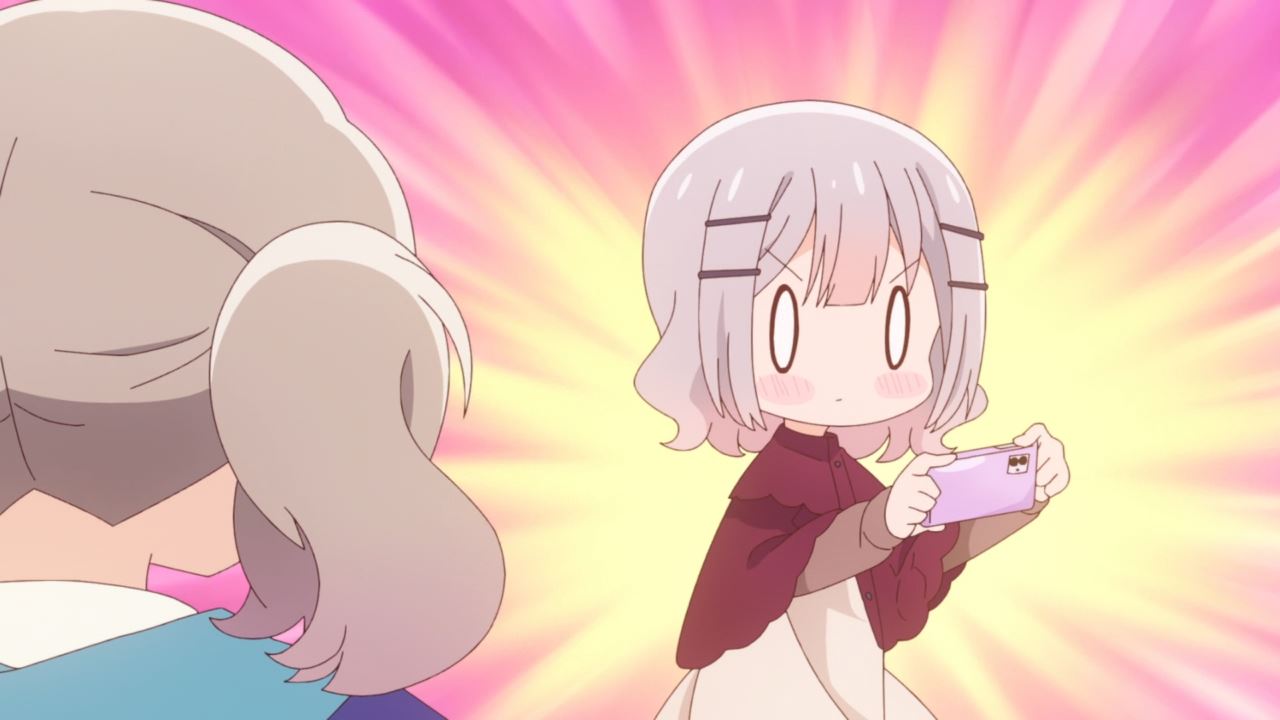 Meanwhile, looks like Futaba Fukumoto shows her stuff that Aiko Ninomiya couldn’t help it but to take lots of pictures of her friend. Glad that Aiko-chan is very supportive to Futaba. 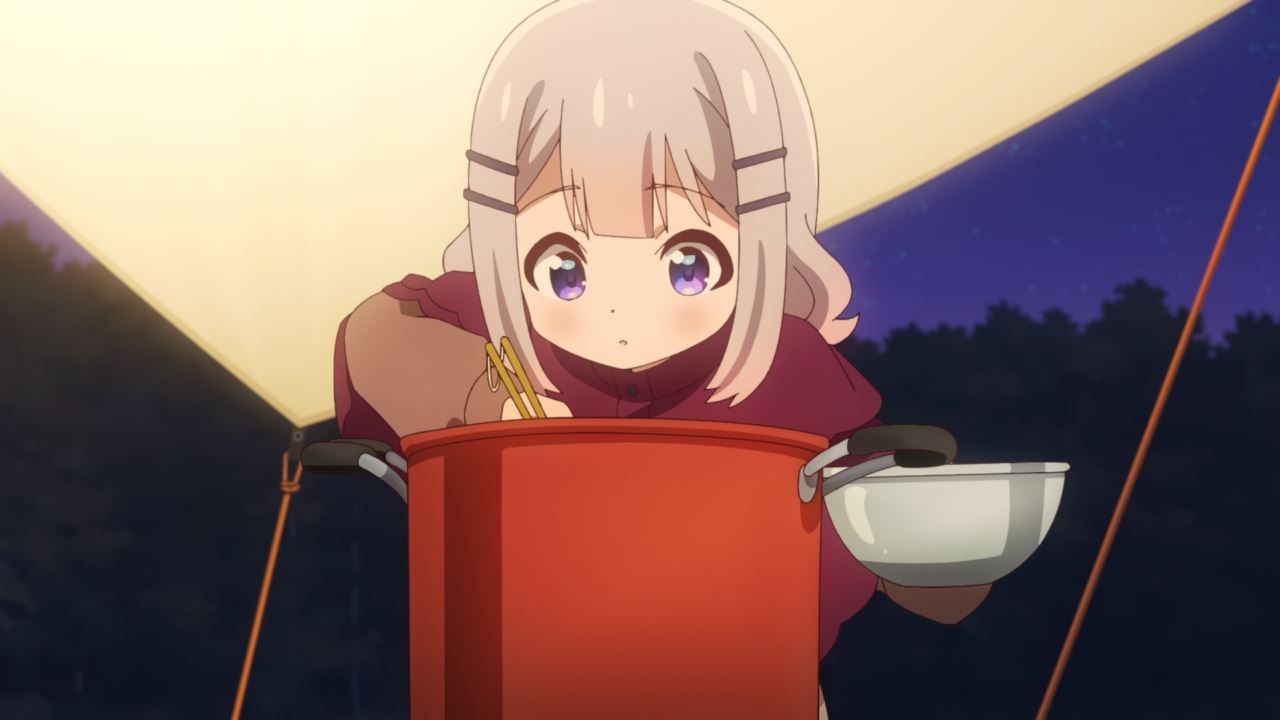 And speaking of Aiko-chan, she and Futaba are helping Koharu as they’re making a Russian fish soup called ukha, using the rainbow trout that they’ve caught earlier in the afternoon. 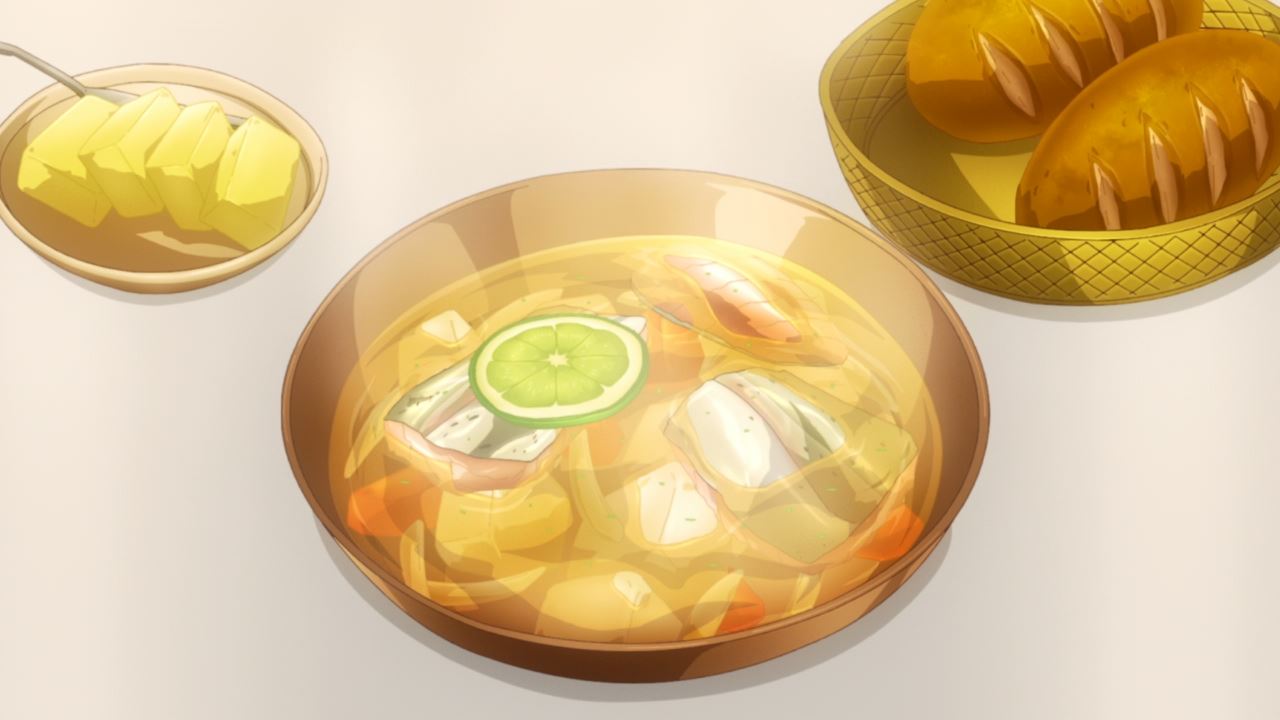 But here’s the finished product where it looks invigorating. Of course, how’s the taste? 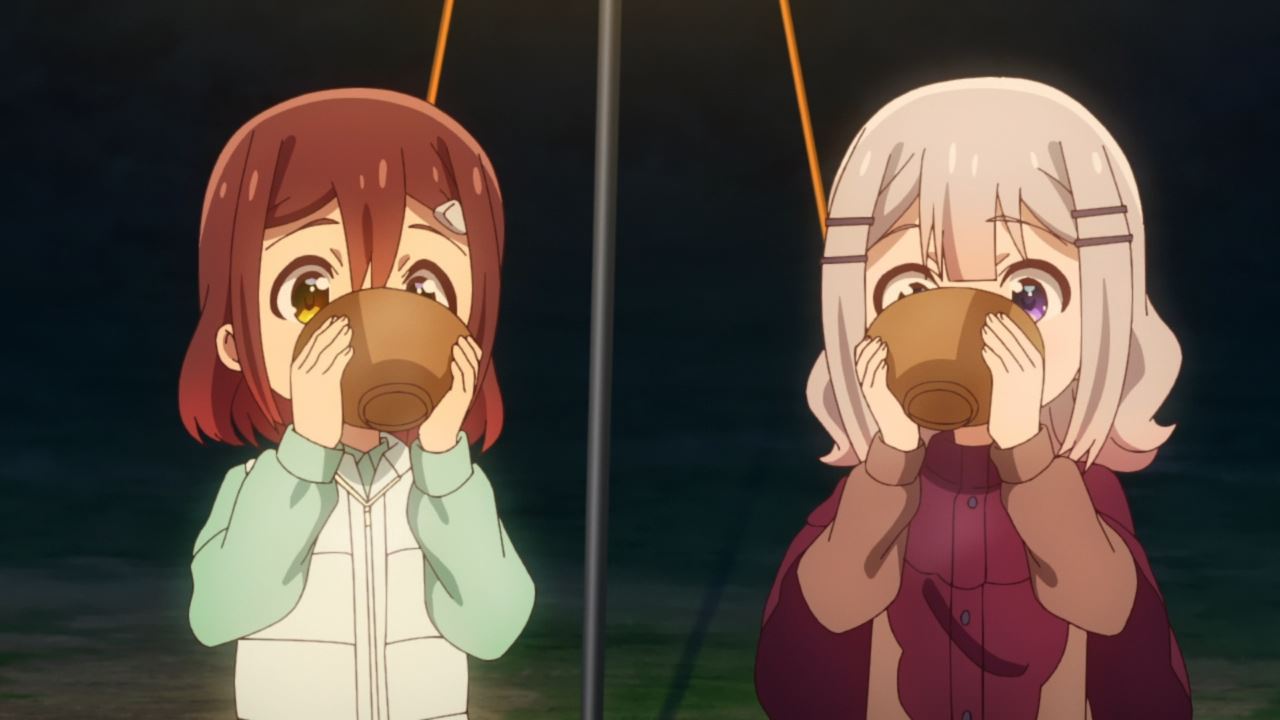 Well, both Futaba and Aiko-chan loved eating it as they did a great job on creating an ukha together with Koharu. 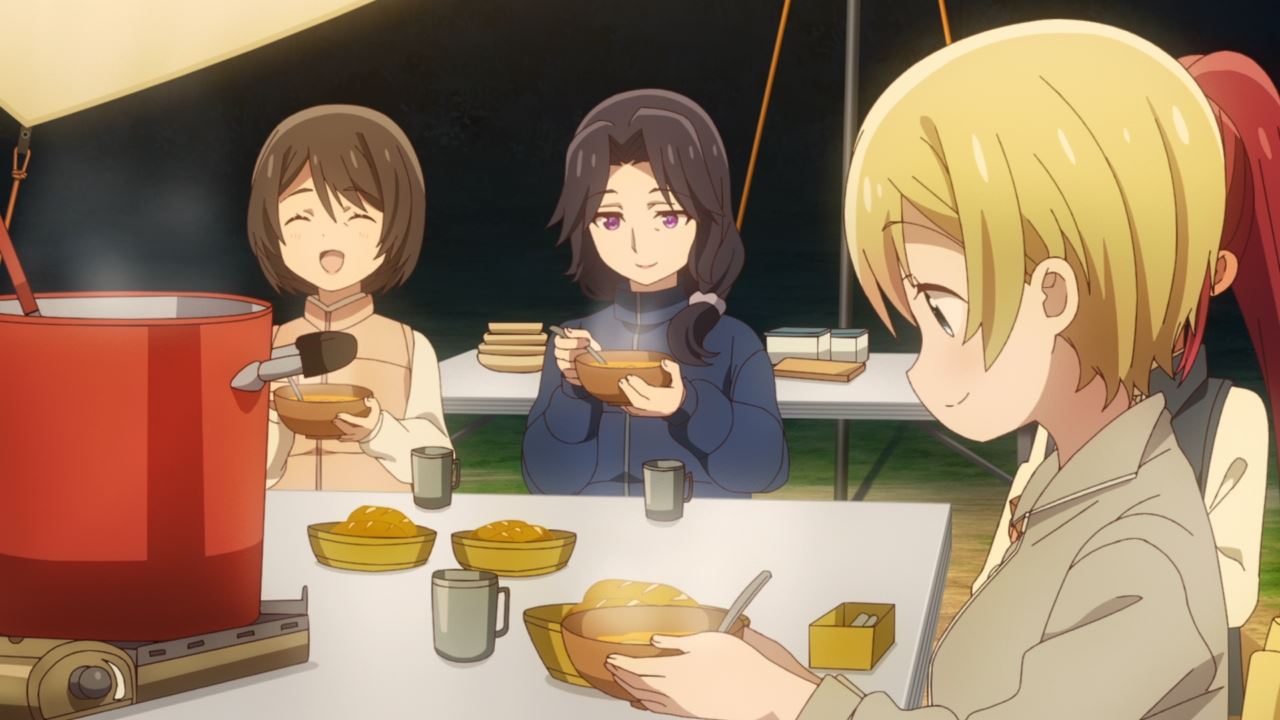 Even the adults enjoyed sipping a bowl of ukha as it’s a perfect pair for a cup of hot wine. Let’s hope that they’ll drink it in moderation, especially Ichika-san. 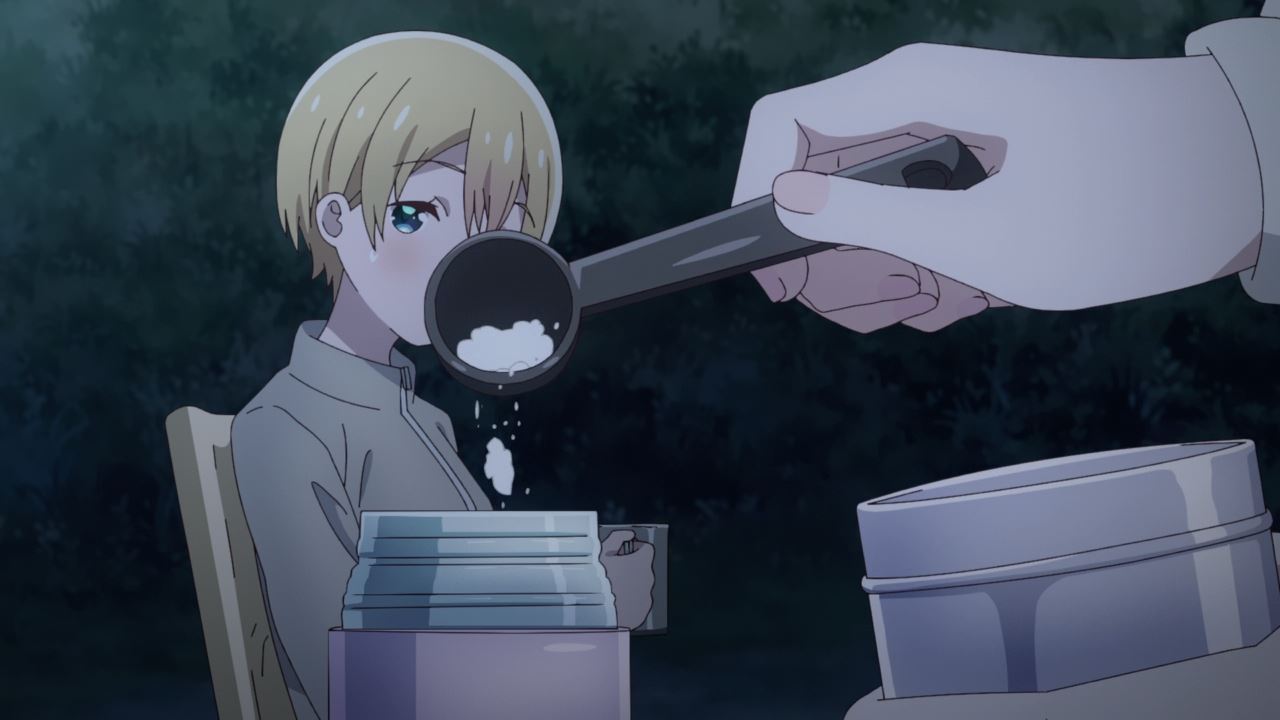 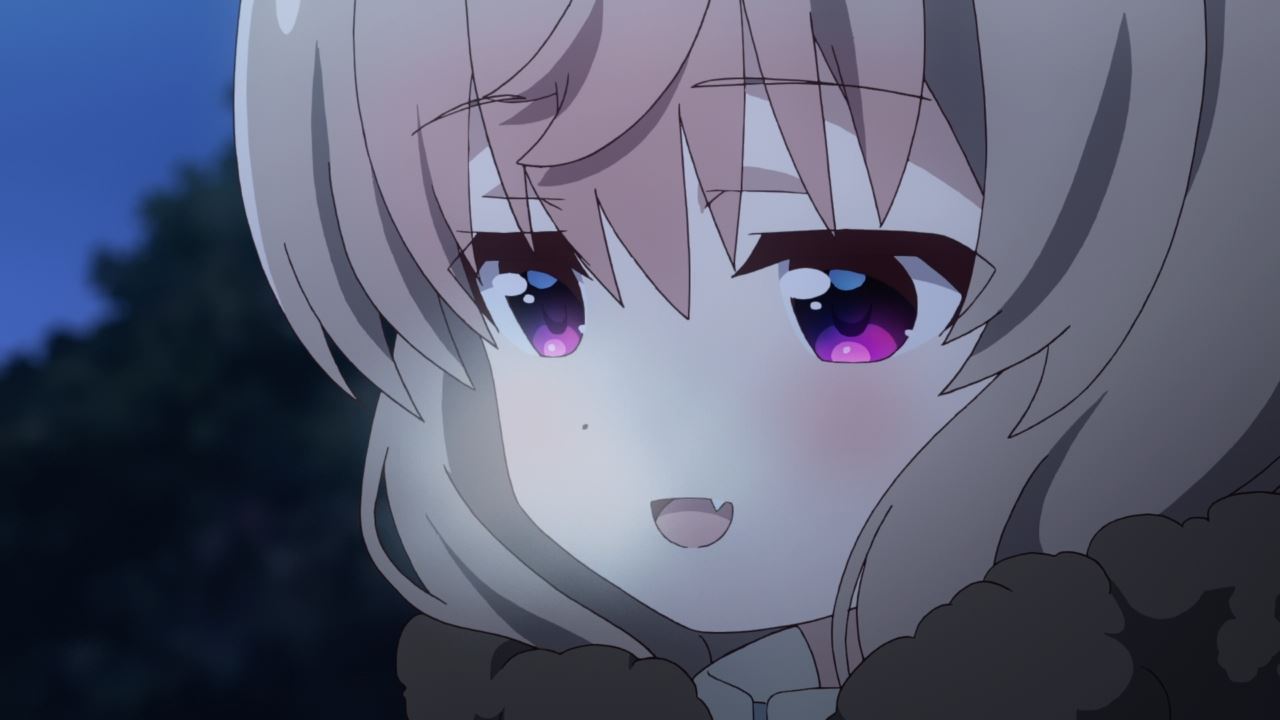 One last thing, let’s move onto the next day where Koi Yoshinaga prepare some coffee for the rest of campers, including Hiyori Minagi where she preferred drinking sweet coffee.

So while she prepare Hiyori’s coffee, Koi-chan told Kaede Miyano about the time she told Hiyori about Hinata’s remarriage. You may thank Koi’s mother Reiko as she learned that Hinata will marry Issei. 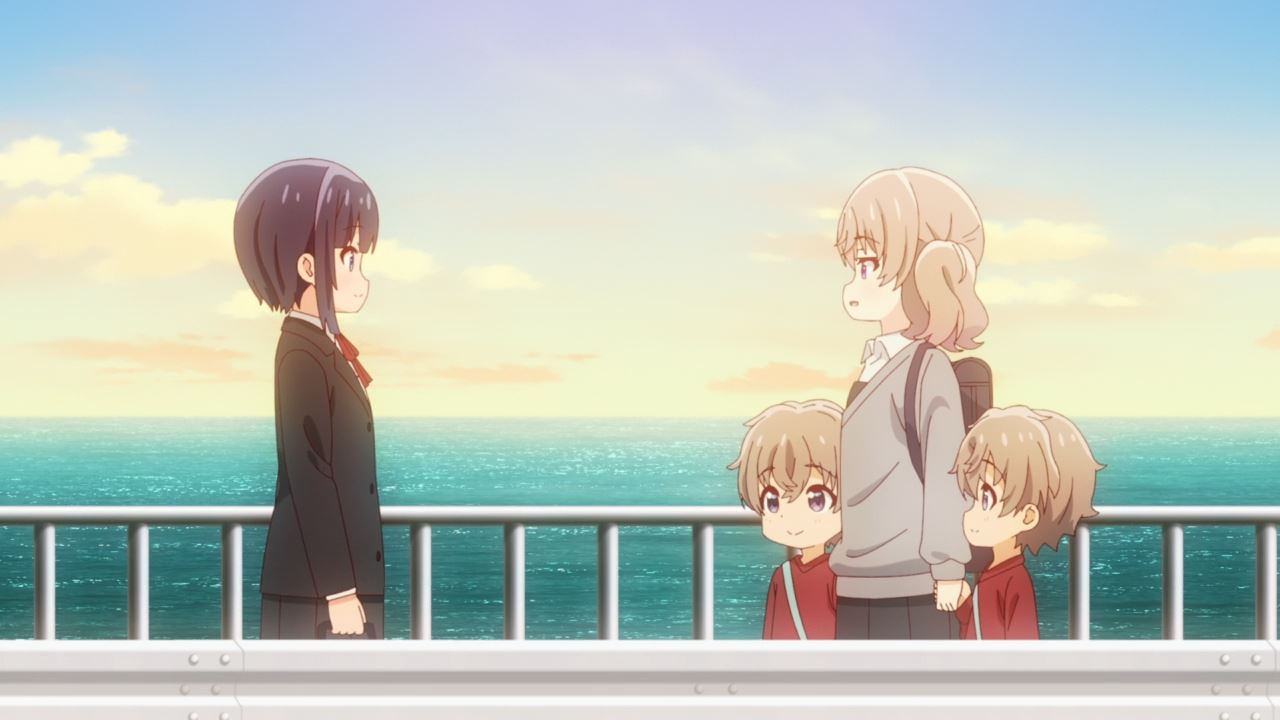 Of course, things would be played differently had Koi didn’t mention about Hinata’s remarriage to Hiyori. Heck, I would see Hiyori getting a shocking surprise that she tries to convince her mom not to marry some stranger, even though Issei is actually a nice guy who cares for Koharu.

But in the end, it’s nice that Koi Yoshinaga told Hiyori Minagi regarding Hinata’s remarriage. And seriously, Hiyori had fun taking up fishing together with her new step-sister Koharu. 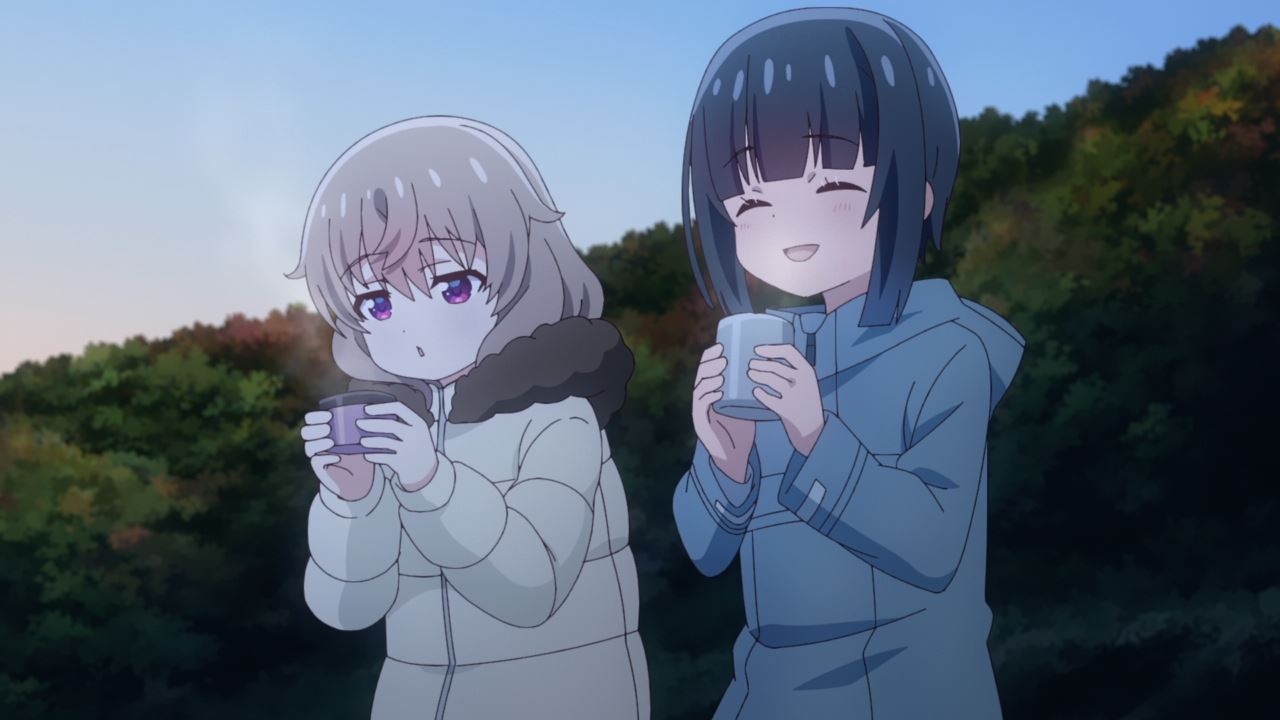 With that said, it was a fun camping trip where the girls had a great time catching fish at a lake. Heck, Koi even share a cup of coffee to her childhood friend Hiyori. Sadly, the next episode will be the last one for Slow Loop.

But yeah, it’s nice that Koi Yoshinaga shares her story on how she learned that Hinata-san will remarry to a nice guy like Issei-san. Anyways, see you next time!