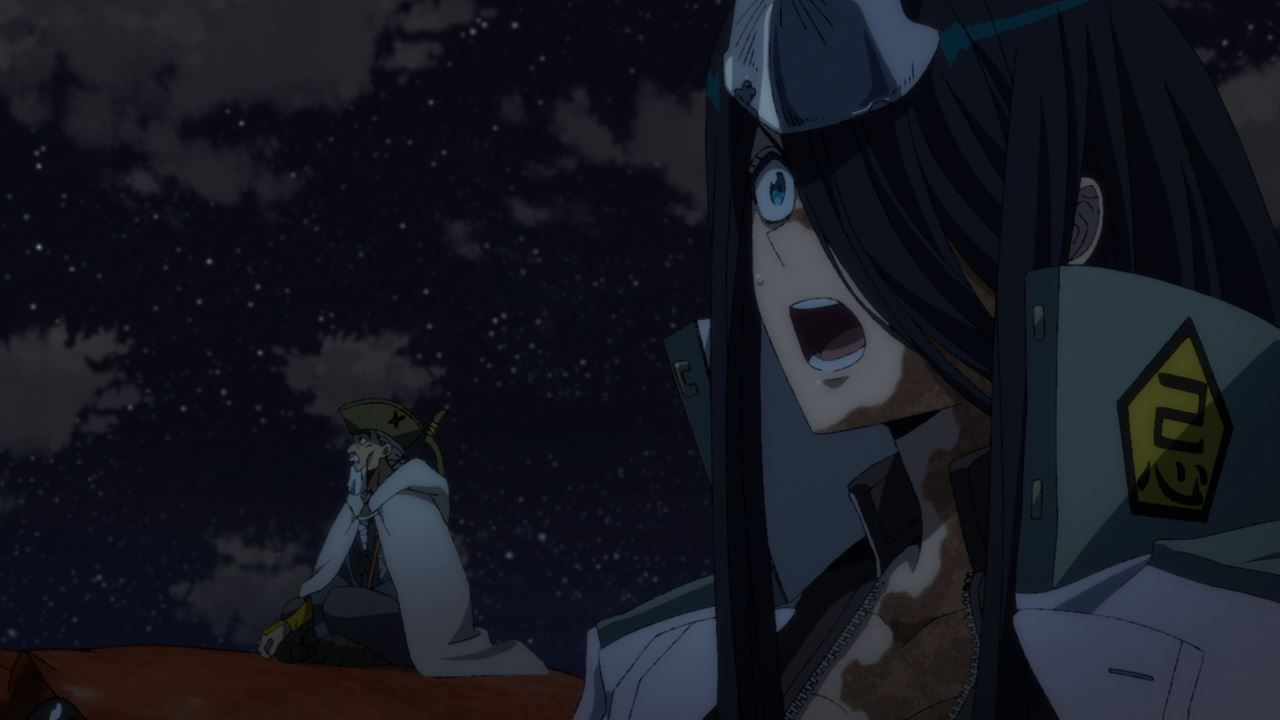 Well then, looks like Jabi and Pawoo Nekoyanagi are really shocked that Bisco Akaboshi cheated death. Of course, there’s more than just his resurrection… 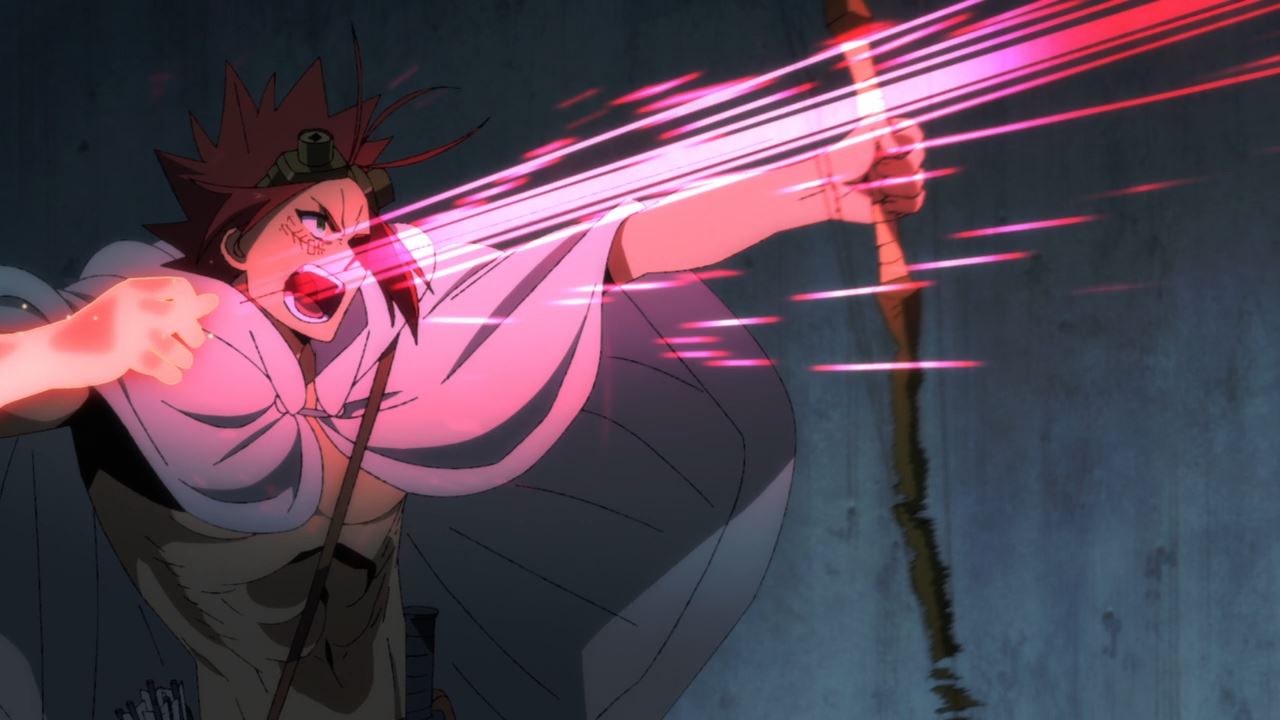 Oh yeah and the reason for his glowing hand is because Bisco ingested some pipe snake’s venom when he’s inside the reptile’s belly back in Episode 7. 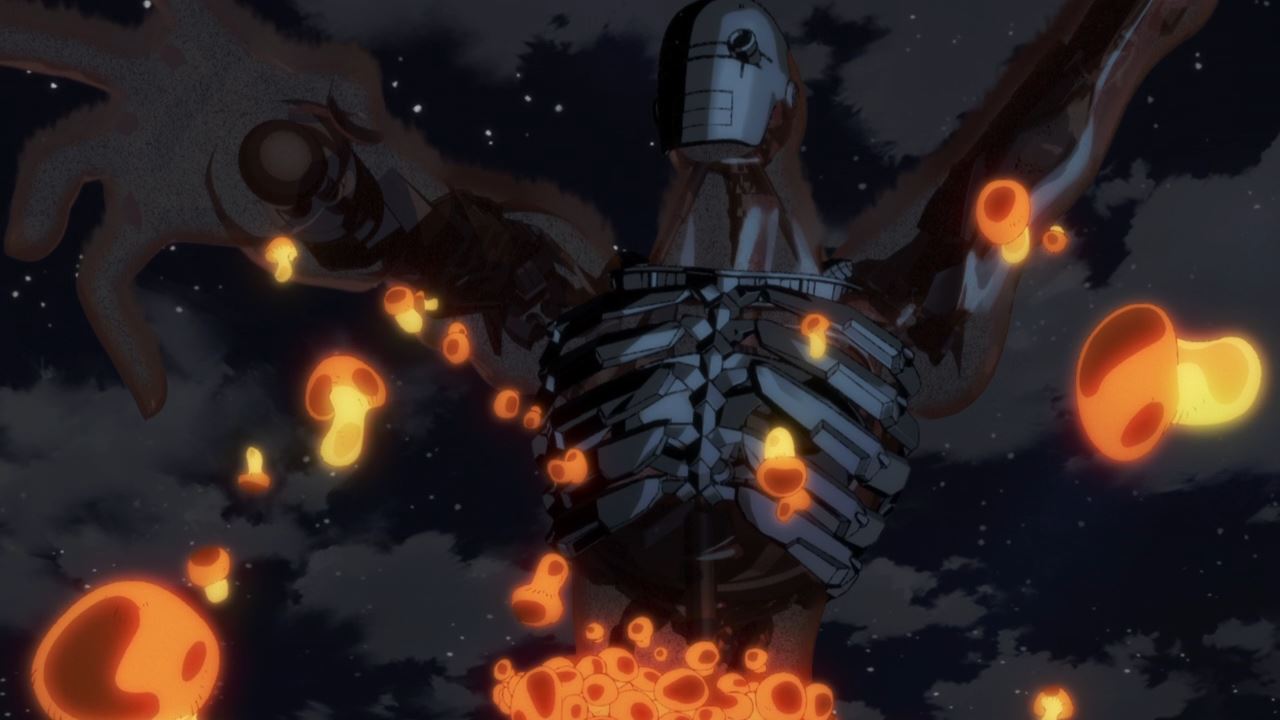 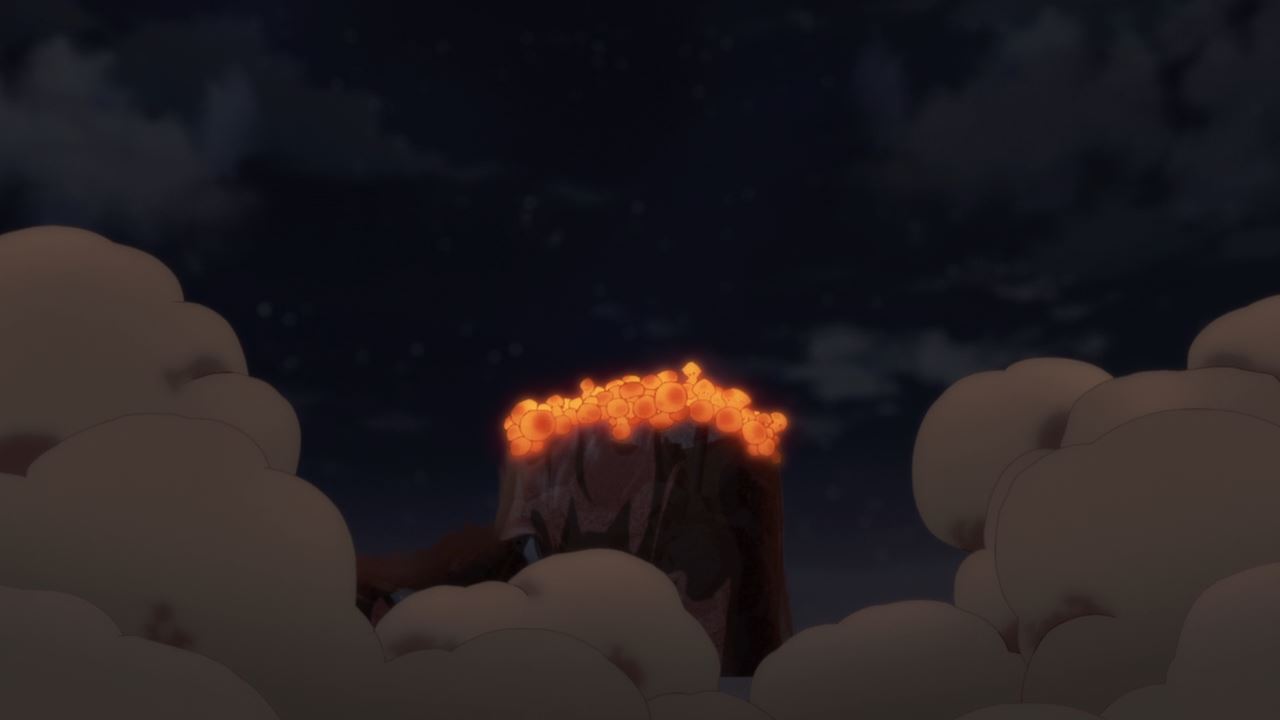 But thanks to Bisco’s immerse powers, he can not only cut the Tetsujin in half with an arrow, but it can grow Rust-Eater mushrooms from the Tetsujin’s body!

Of course, only the lower half of it as the upper half is still moving. 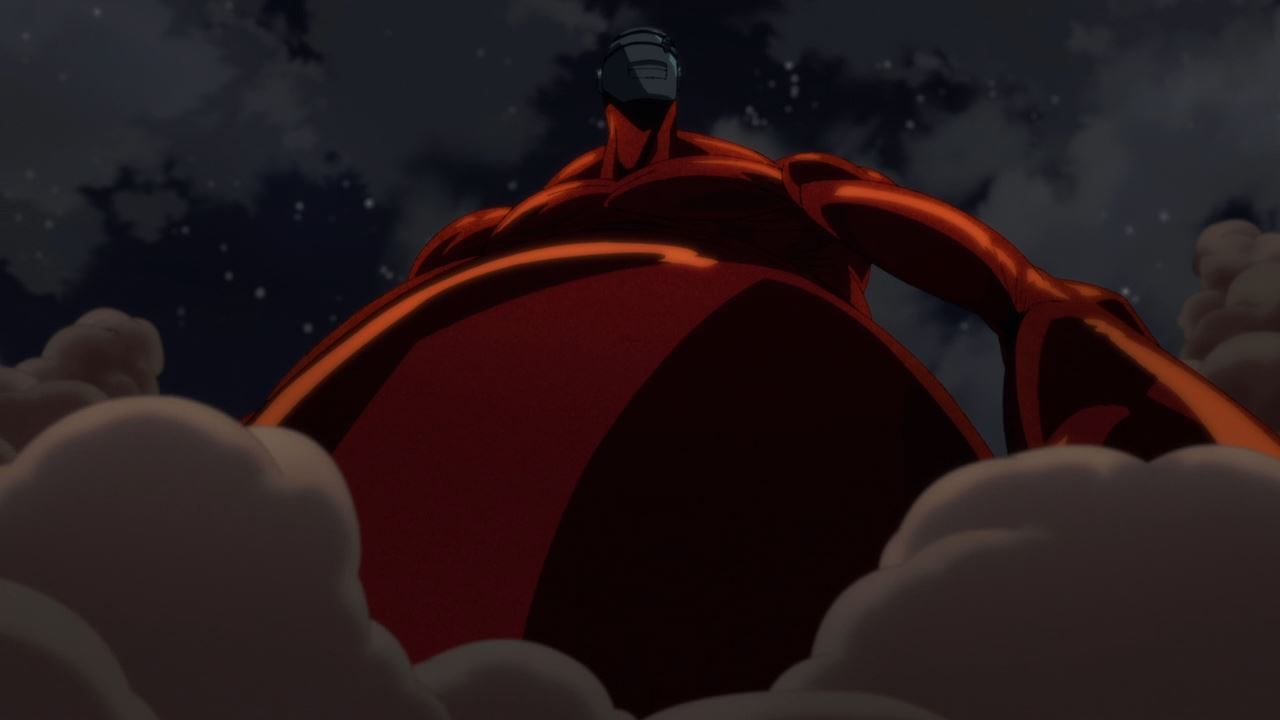 And speaking of the Tetsujin, looks like the iron giant remained persistent as it belly up its entire torso. 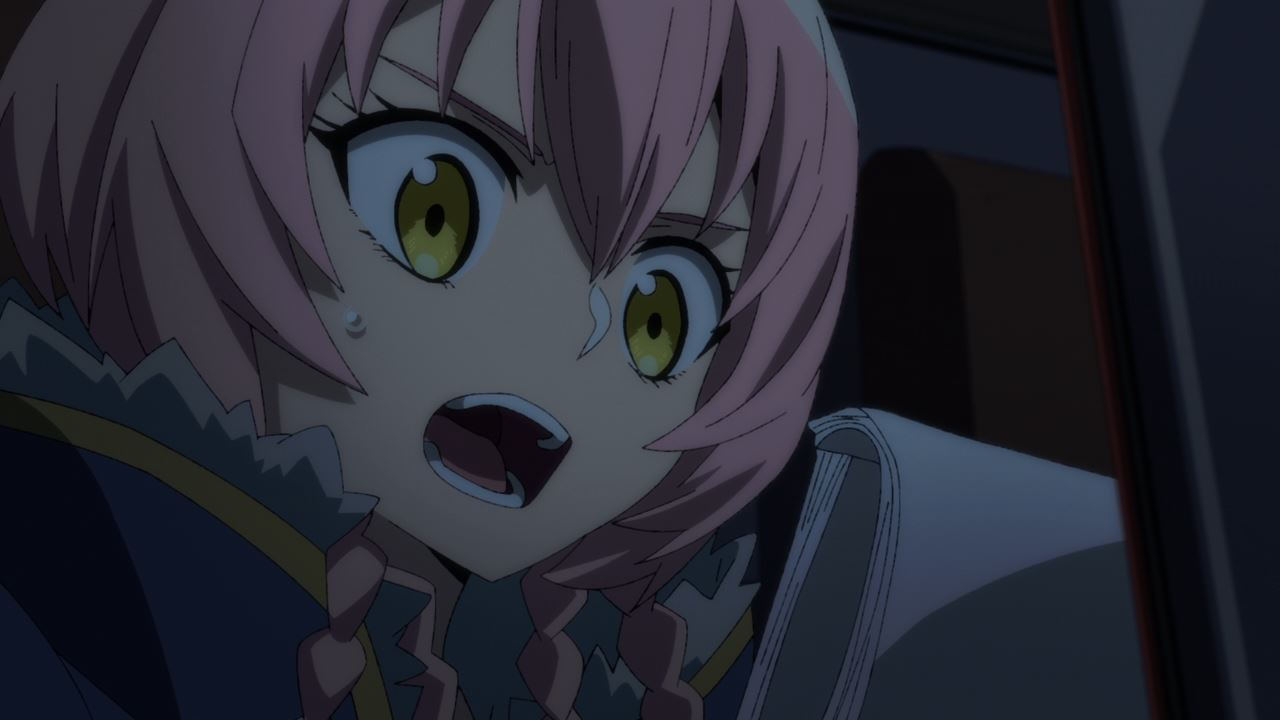 Oh yeah, and it’s also a bad idea to shoot the Tetsujin in this state as Tirol Ochagama explained that the iron giant might cause a big explosion that’ll engulf Imihama. Well, I guess there’s no other way to stop the Tetsujin… or is it?

Well actually, the only way to stop the giant from exploding is to shoot the head, which contains the Tetsujin’s pilot. Of course, the head part is covered by a mask so it’s quite difficult to make a clean head shot. 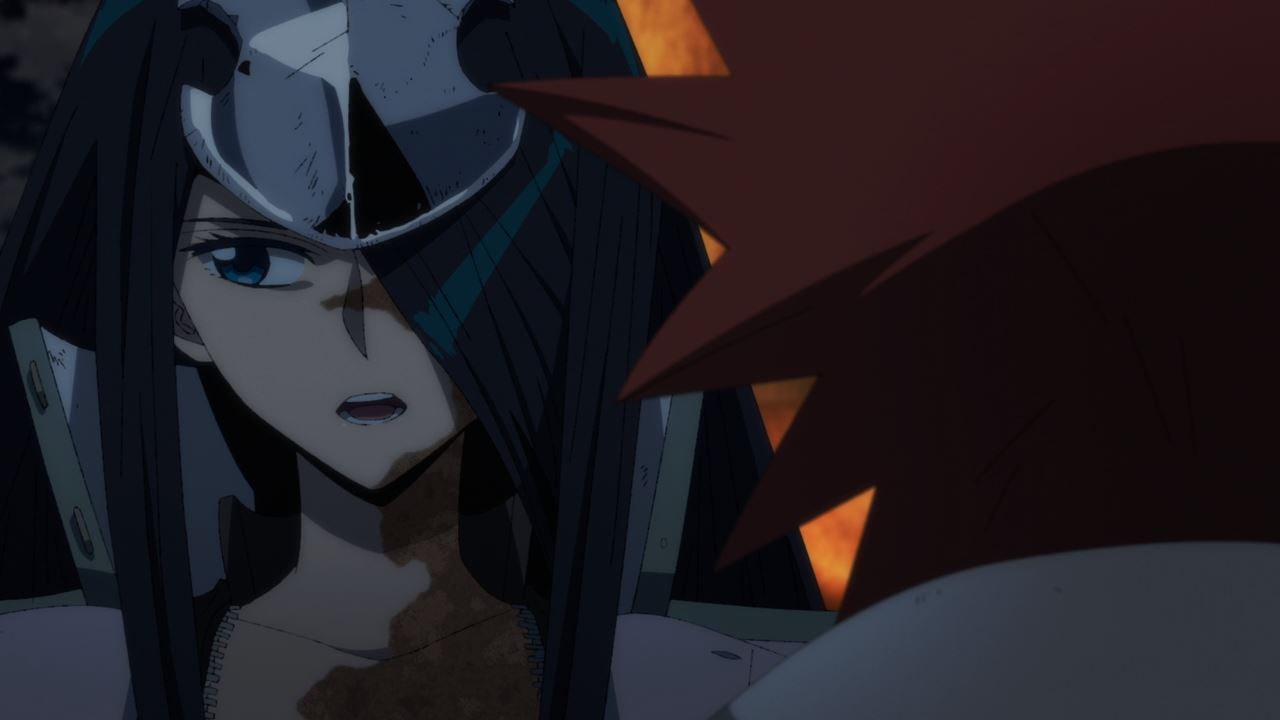 That’s where Pawoo Nekoyanagi comes in where she’ll break the mask using her steel pole. Also, she has one request to make before taking on the Tetsujin. 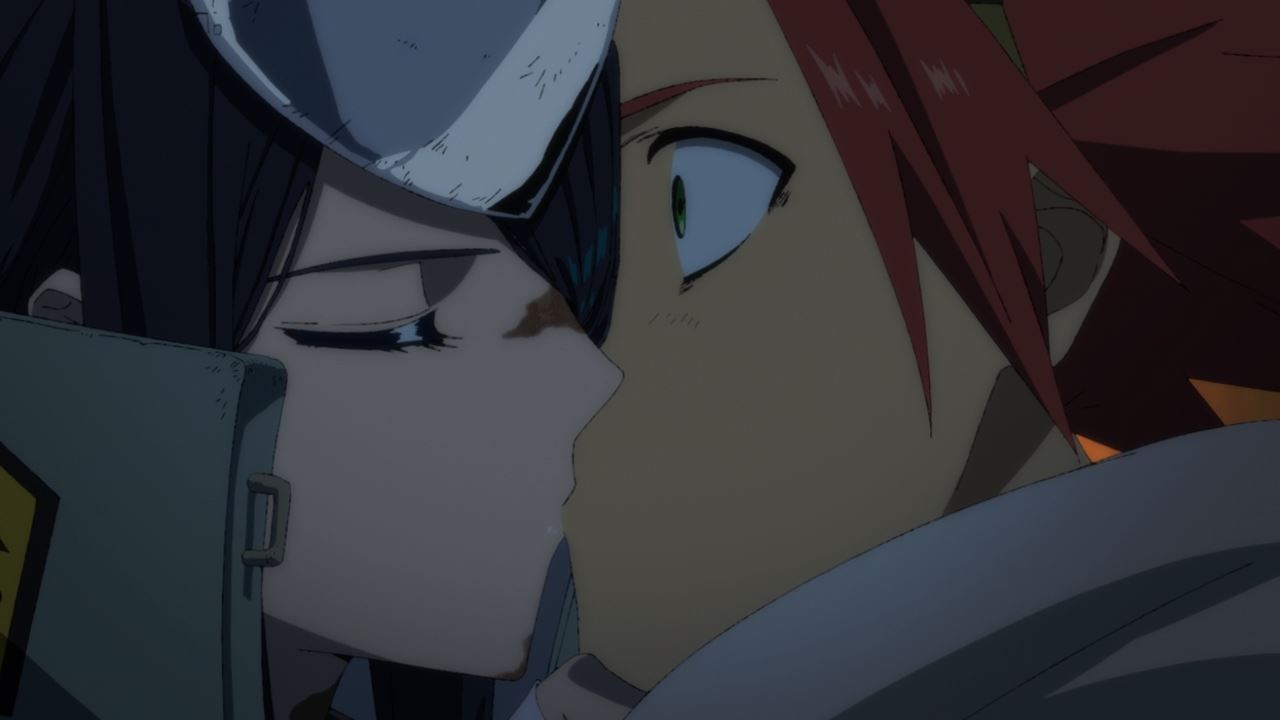 And that’s kissing Bisco in the lips. While Pawoo is a good wife material, she really pulled a fast one towards the Mushroom Keeper. I guess Milo got cucked by his own big sister! 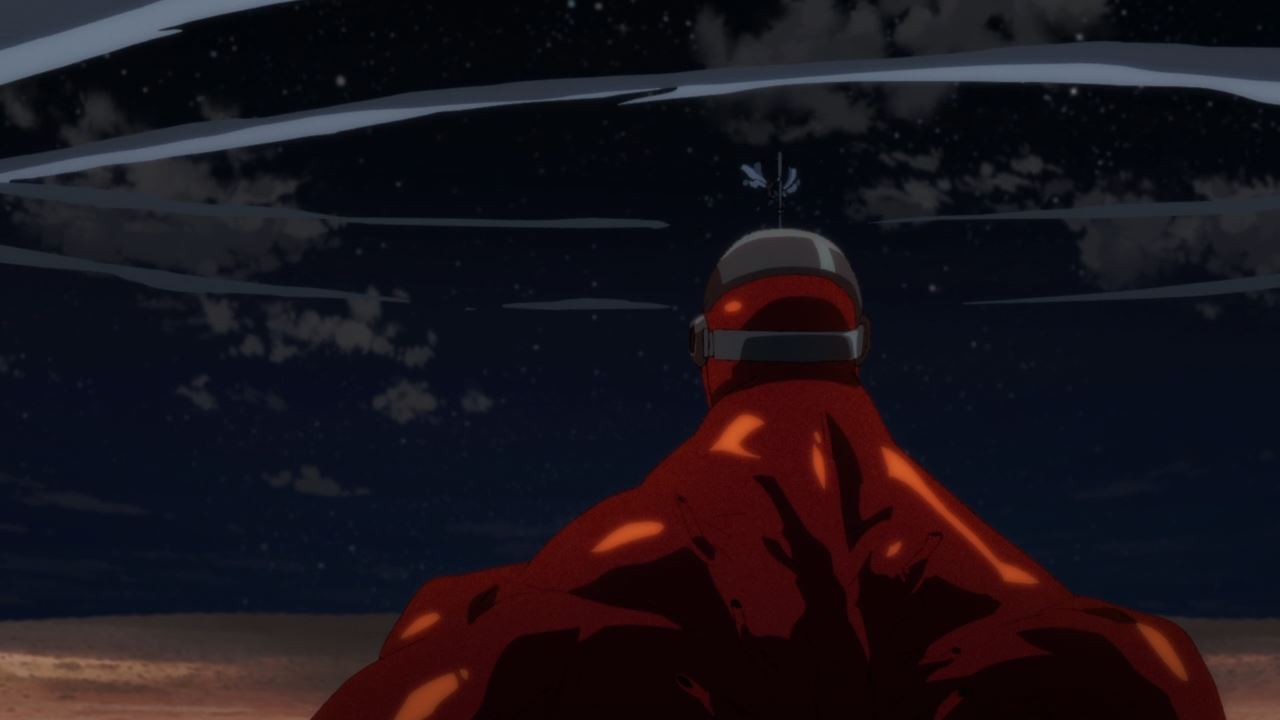 No matter then, let’s move onto cracking some masks as Pawoo jams her pole onto the Tetsujin’s mask. Of course, it’s not enough to break it open… 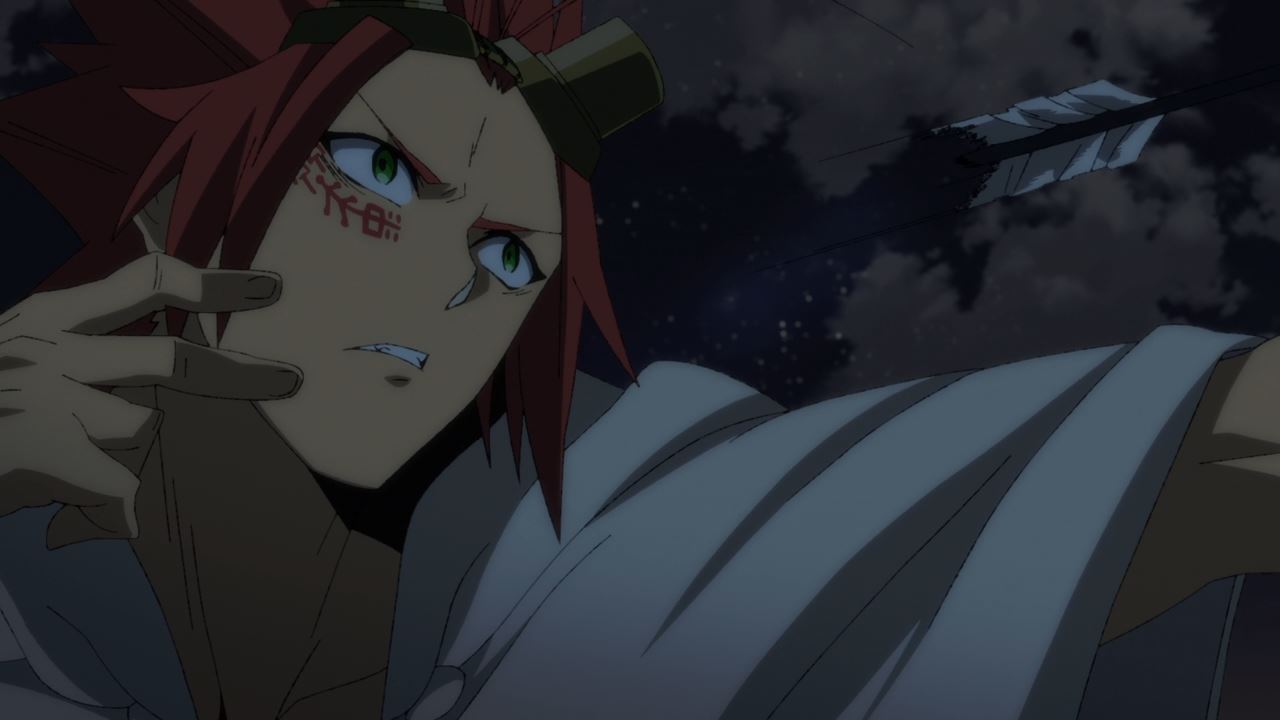 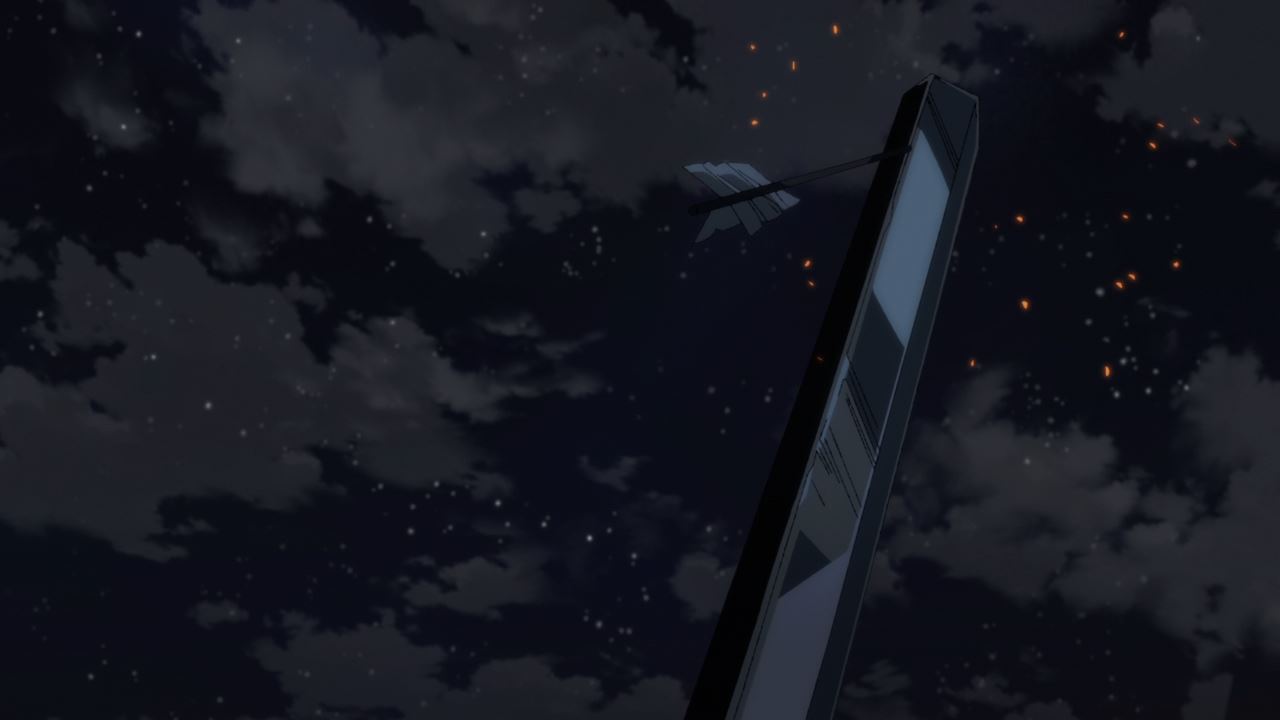 Not until Bisco fires his arrow to give it a little nudge to Pawoo’s pole. No, there’s nothing sexual about it ’cause Bisco just want to crack the mask open. 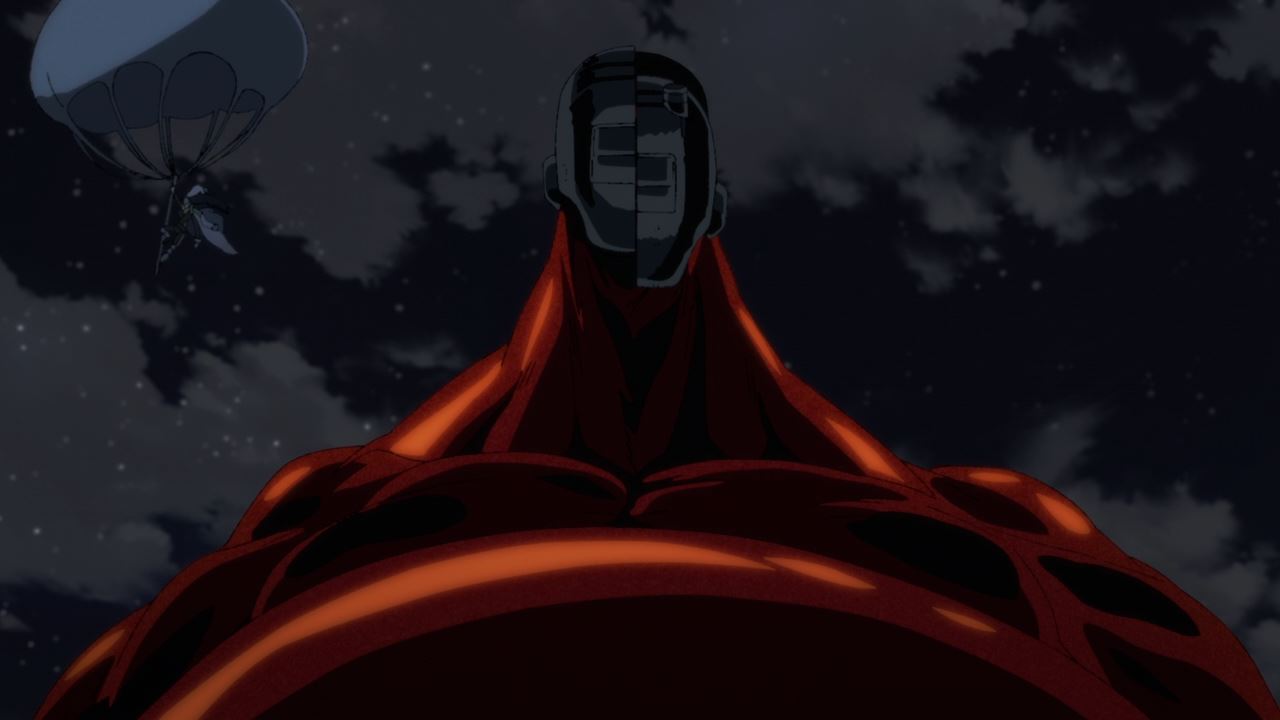 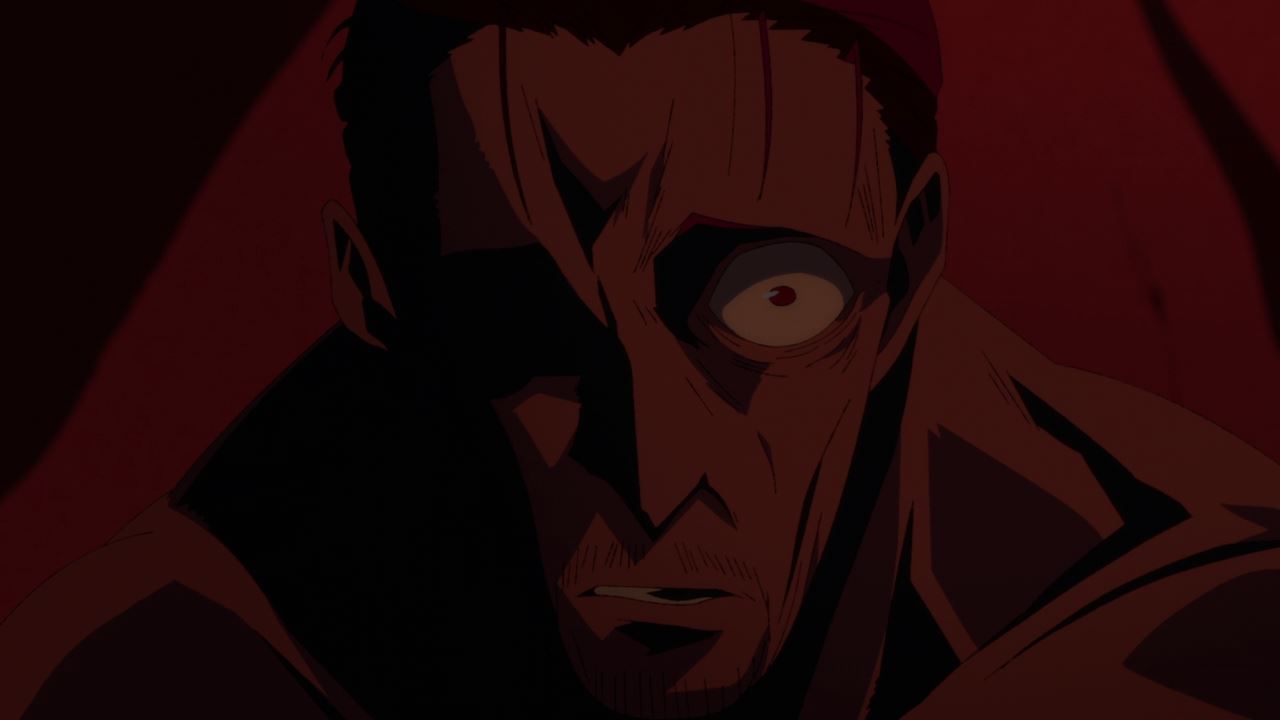 Anyways, looks like the mask is finally broken where it revealed the remains of Governor Kurokawa. Yes, he’s still malding over Bisco even though he becomes a part of Tetsujin. 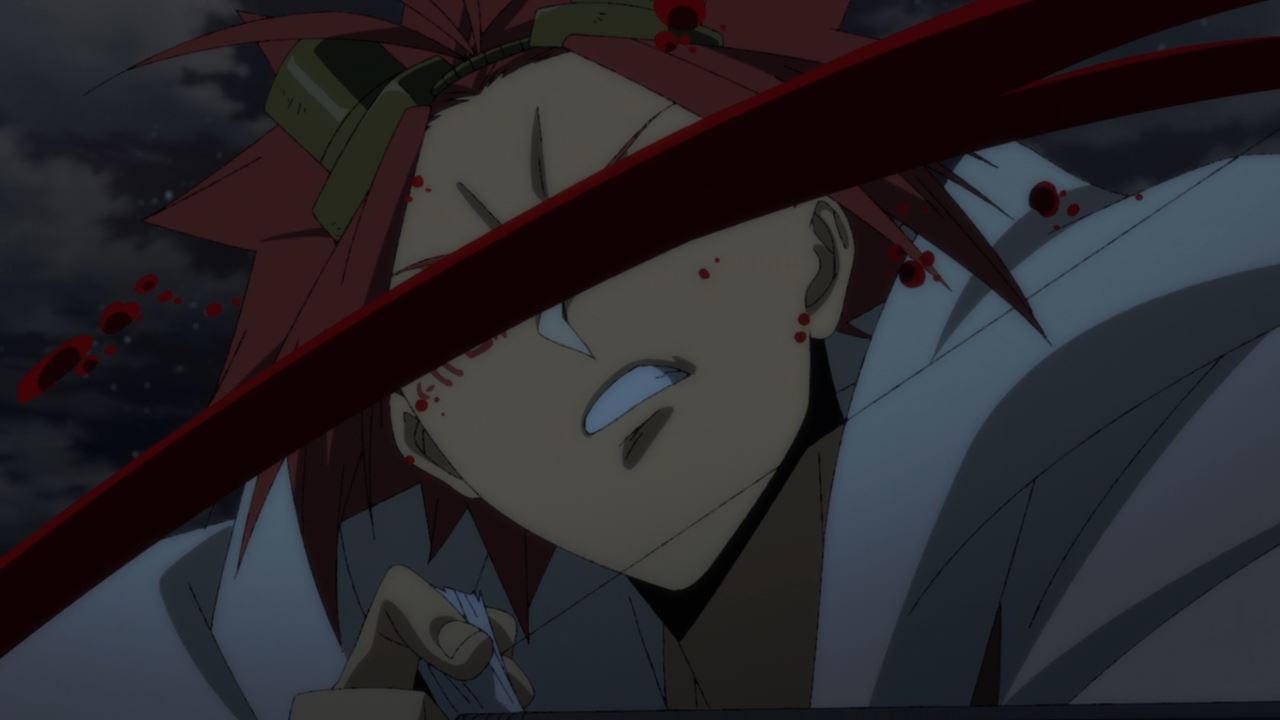 Speaking of Kurokawa, he throws his arm towards Bisco where the Mushroom Keeper got blinded by rust. That was pretty nasty coming from the former governor-turned-abomination! 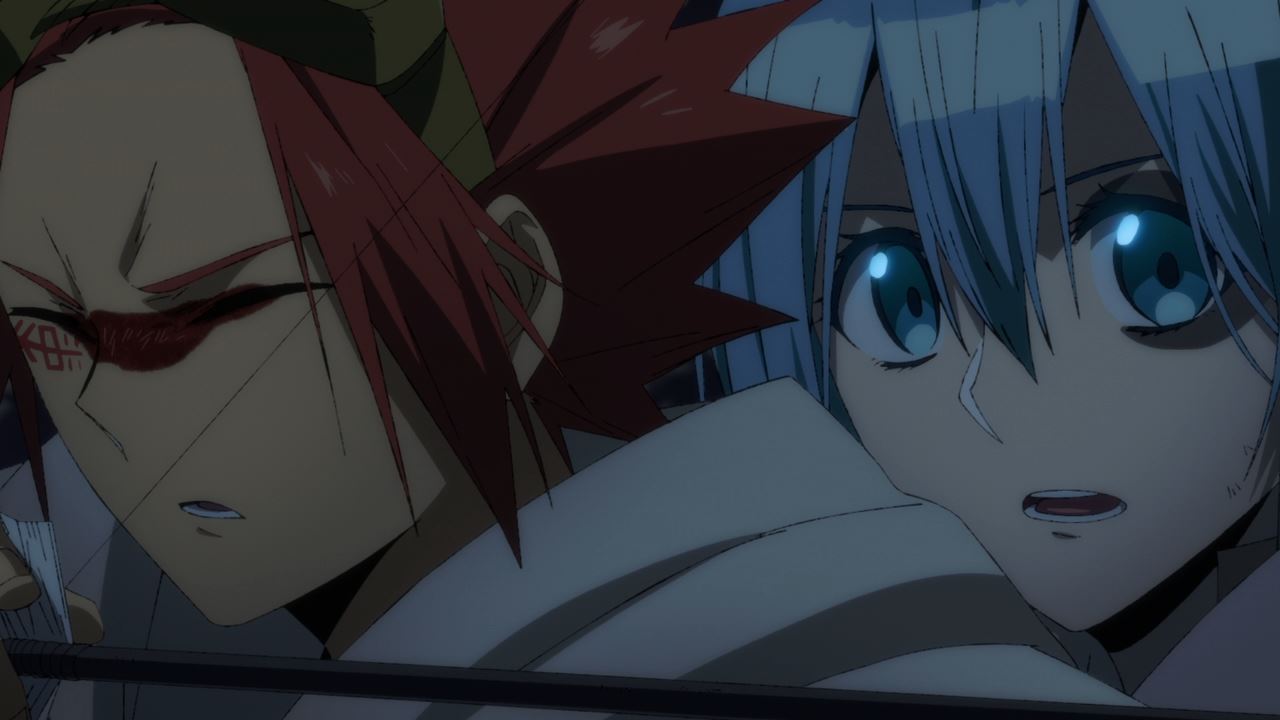 Good thing his partner Milo is here to act as Bisco’s eyes. I guess Milo wants to pay him back for all the training he received. 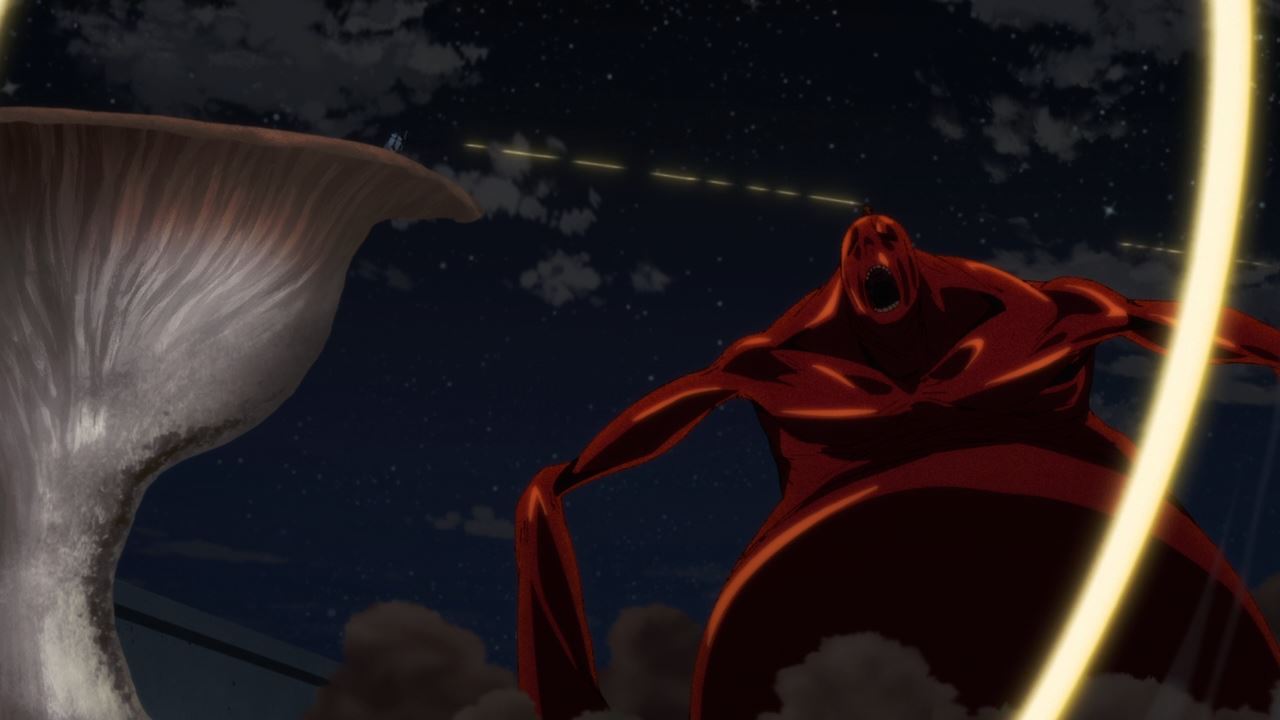 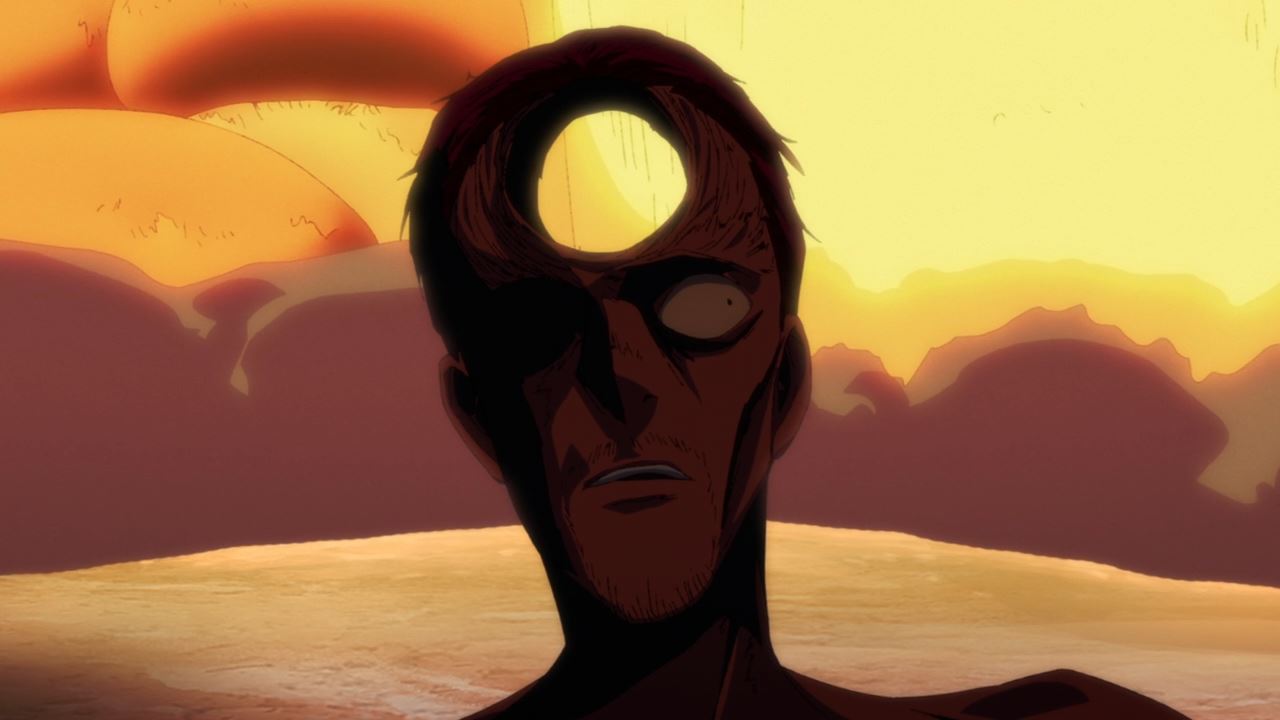 And so, Bisco made a headshot towards Kurokawa where he create a large hole on the governor’s head. Oh yeah, and Akaboshi created a large wave of Rust-Eater Mushroom that’ll engulf the Tetsujin. 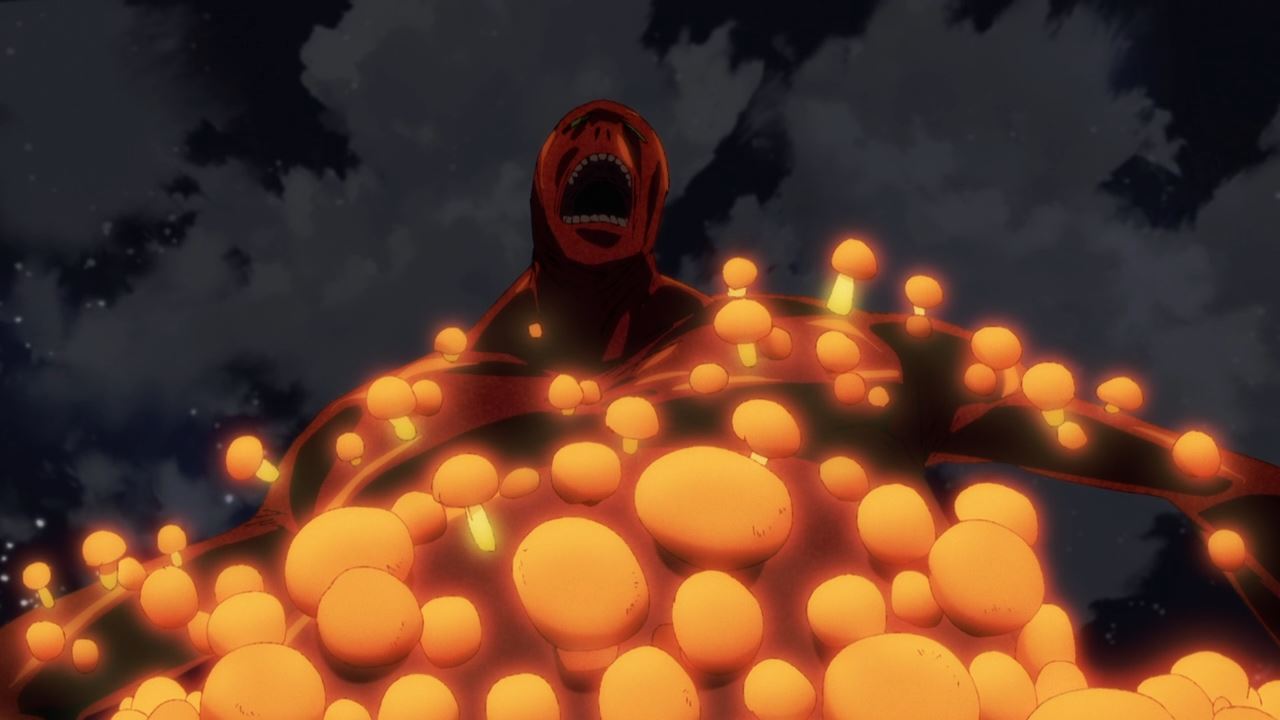 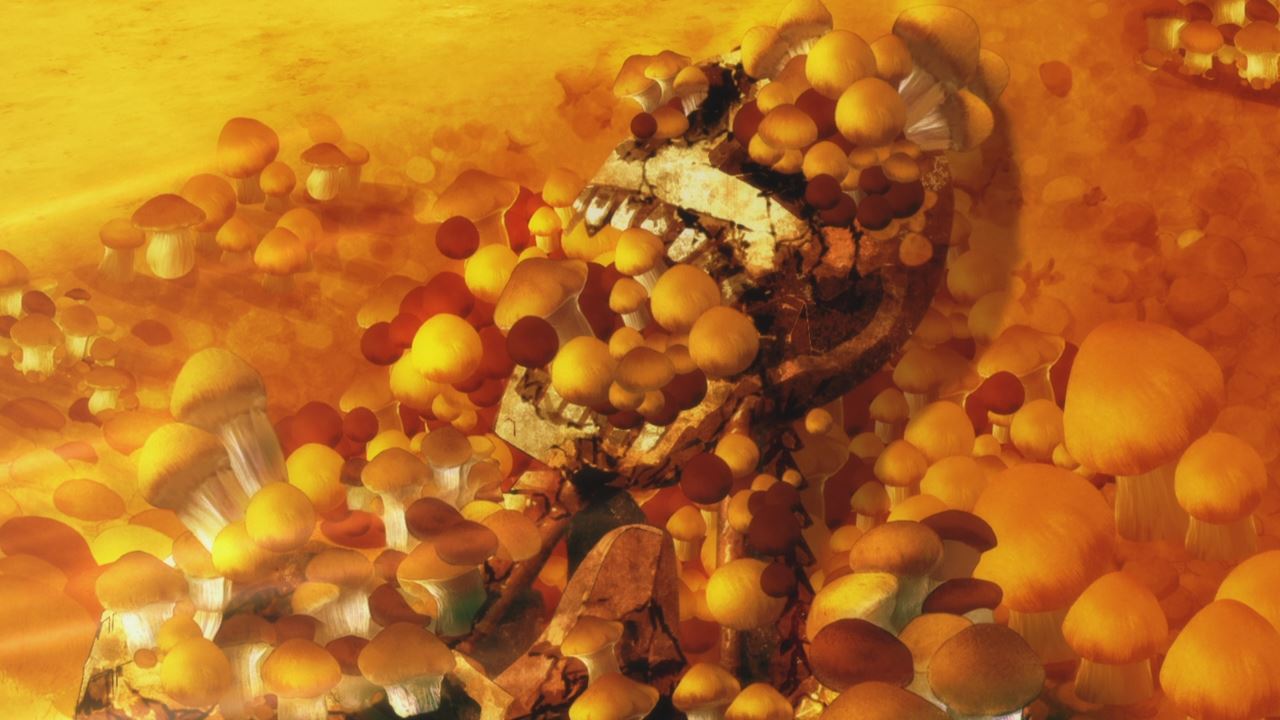 And now, the aftermath where the Tetsujin looked hideous without its rusty skin as it’s been absorbed by the Rust-Eater Mushrooms.

But hey, it’s nice that a bunch of Rust-Eater Mushrooms have been finally bloomed near Imihama. 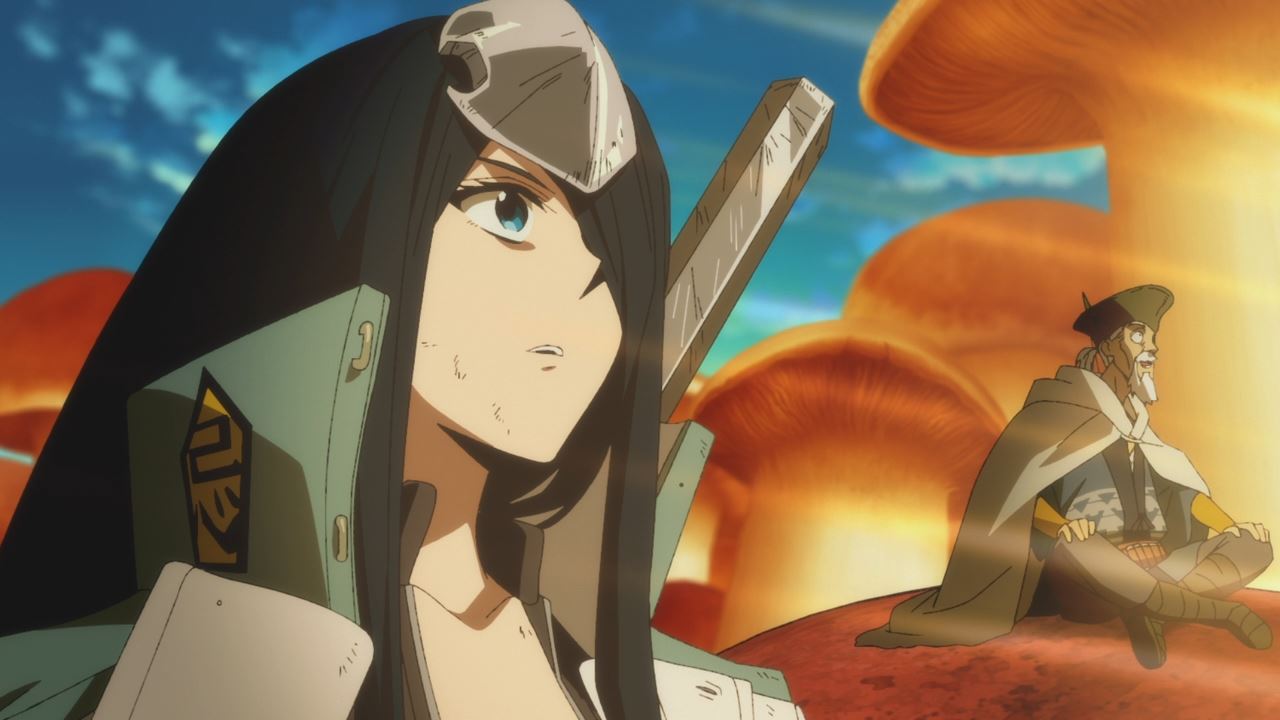 Not only that, but it appears that both Pawoo Nekoyanagi and Jabi got cured from the Rusting disease thanks to Bisco Akaboshi. Sadly, he can no longer see since Kurokawa put some rust on his eyes. 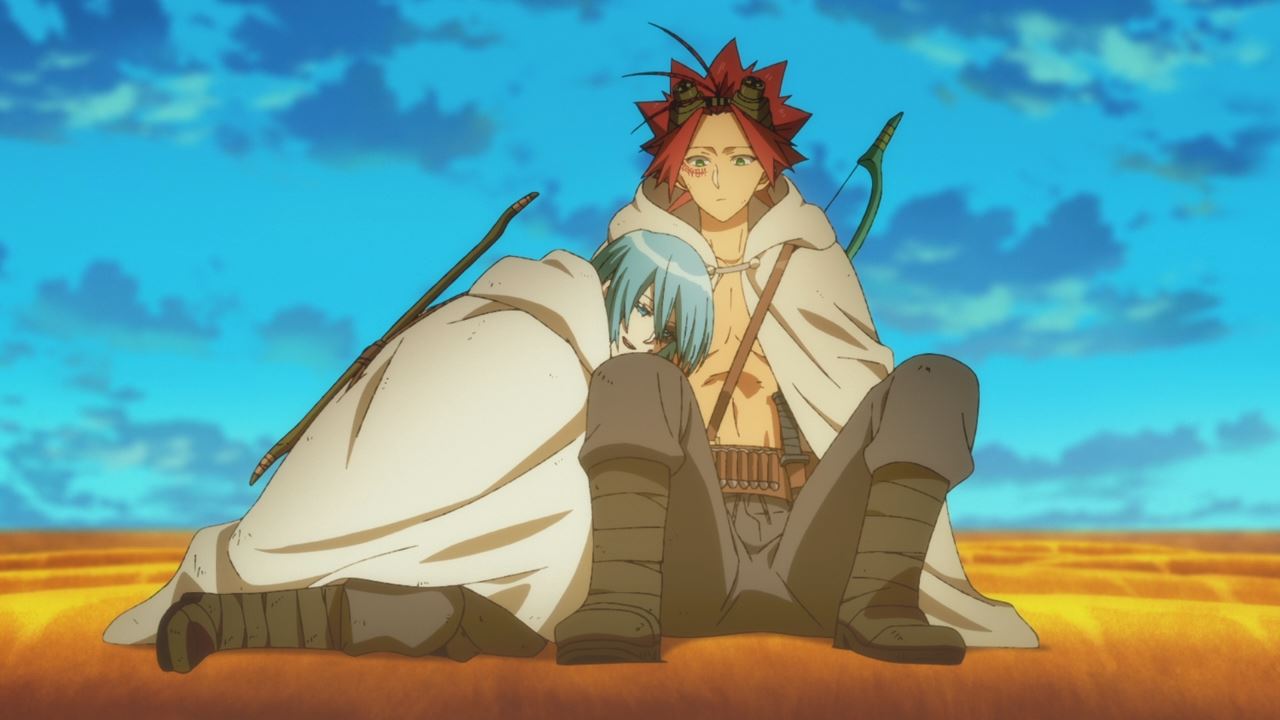 Oh wait, Bisco is also cured but it appears that he’ll remain as a half-human/half-mushroom hybrid, meaning that Akaboshi will live longer than Milo Nekoyanagi. But hey, it’s nice to see these two bros looking at the sun together.

Now, the rest of the story went smoothly where Pawoo became the next governor while the entire population of Imihama Prefecture got cured of the Rusting disease. Despite Bisco and Milo’s efforts, other prefectures sees them as outlaws who spread the Rusting disease. Some things never change, huh?

But that’s the end of Sabikui Bisco where it’s quite an entertaining post-apocalyptic show. Sure that it has some weird moments like Milo pulling out a work from Tirol’s mouth, or even Kurokawa playing some children’s card game to his soldiers, Sabikui Bisco is amusing for its interesting premise and a banger soundtrack. Not to mention to dynamic partnership between Bisco and Milo that they’re treated as the official couple.

Still, it’s unfortunate that most viewers slept on this anime series as Sabikui Bisco has some crazy-ass moments that’s fitting for a shonen anime. But anyways, that’s about my thoughts for this show as Sabikui Bisco needs some love. Oh, and another season if Kadokawa permits that.