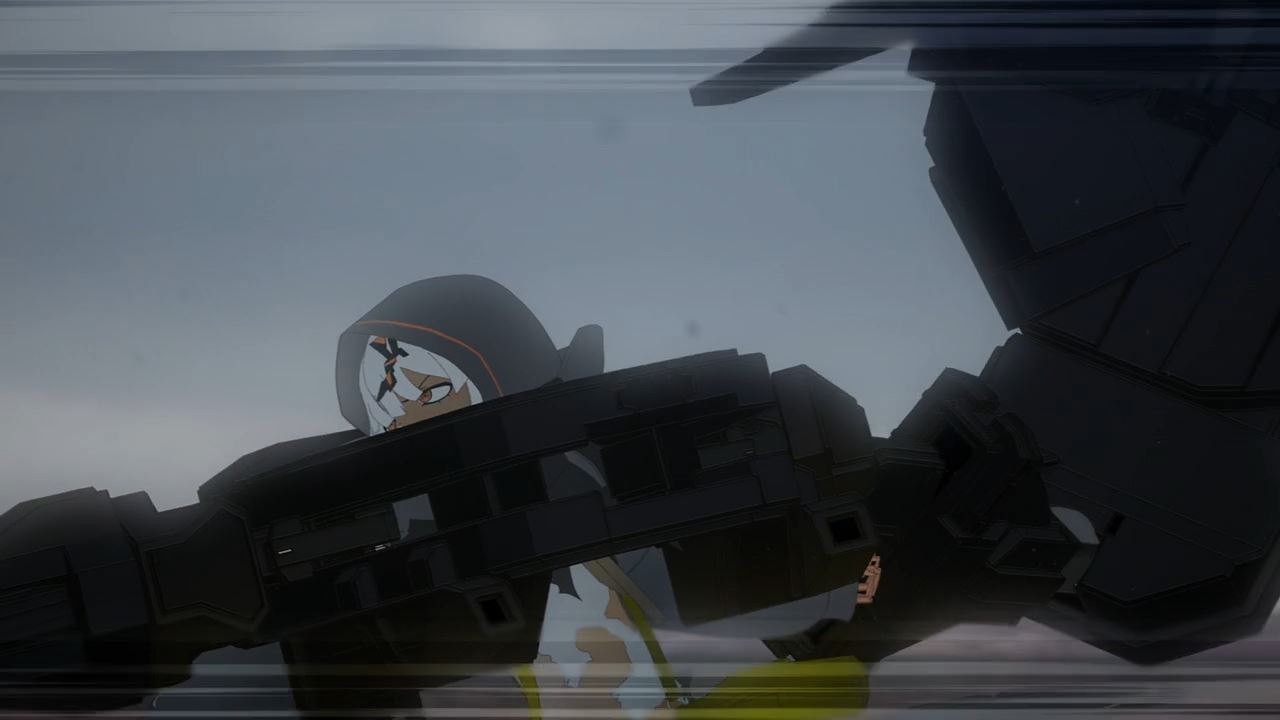 Well look what we have here, it’s Strength where this Hemiteos Unit was supposed to be an ally to Black Rock Shooter Empress during the war against Artemis. 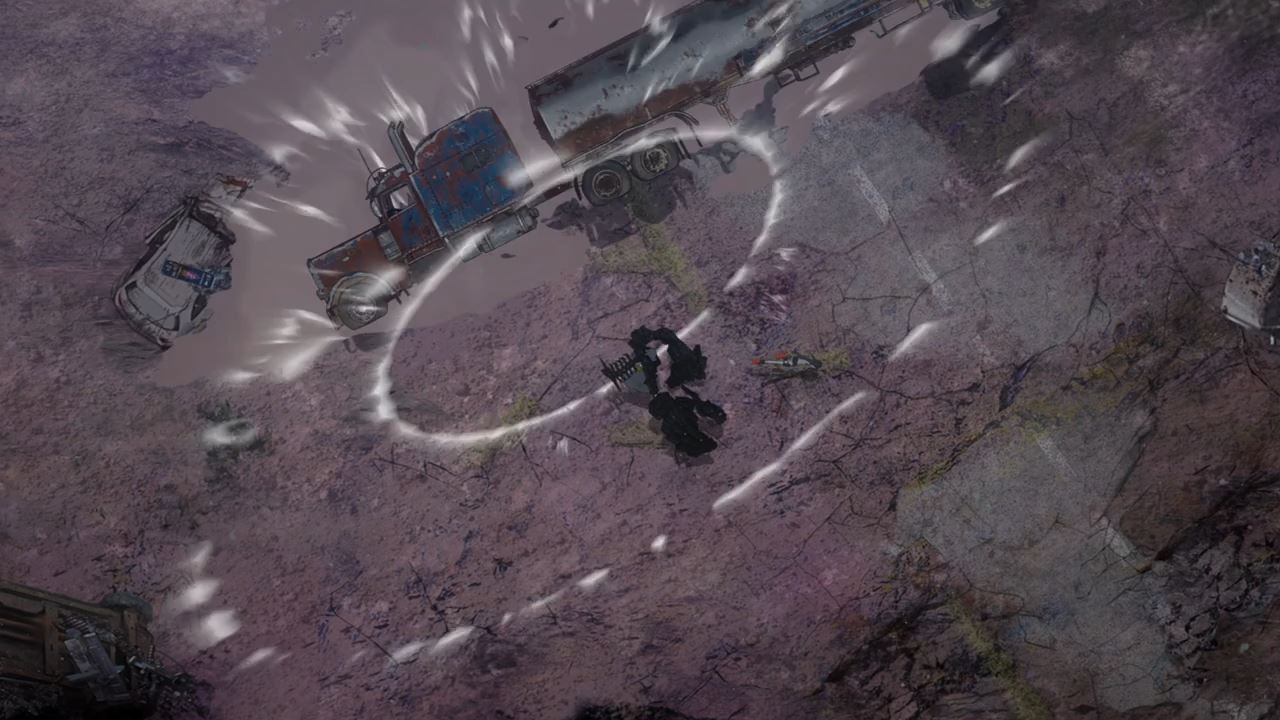 Except that Strength wants to pummel Black Rock Shooter with its giant fists. I have a feeling that she doesn’t remember everything after Artemis kicked Strength in curb during the initial phase of the war.

At this point, Black Rock Shooter Empress is gonna get dismantled by Strength. 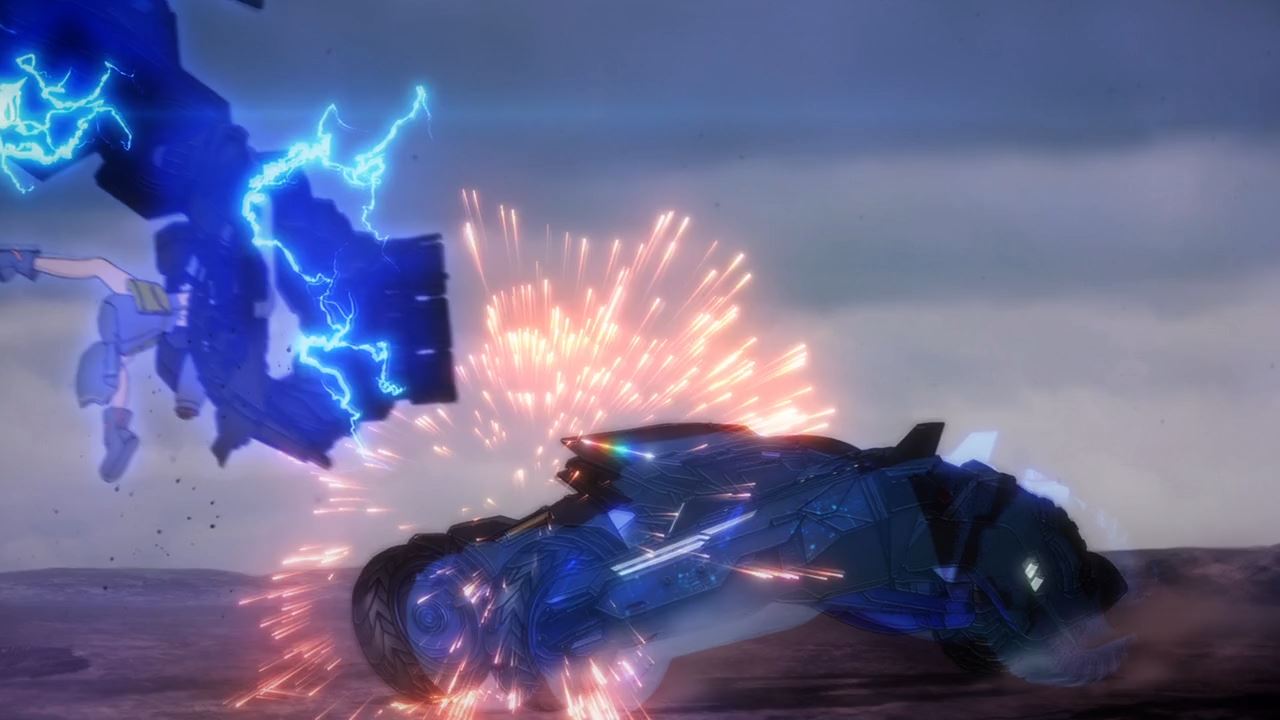 Fortunately, her trusty Black Rock Biker has arrived to stop Strength from delivering the finishing blow. And with that, Black Rock Shooter Empress is safe. 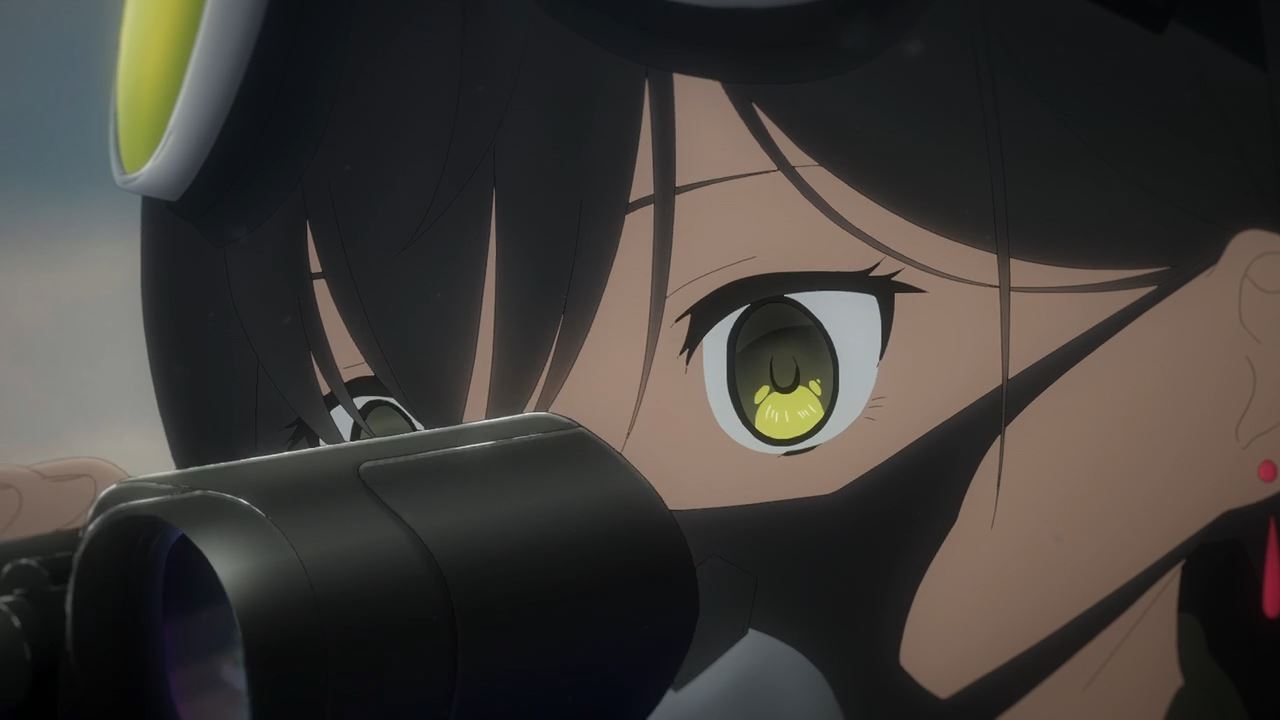 On the other hand, it appears is someone is very interested in Empress, but we’ll get to her later. 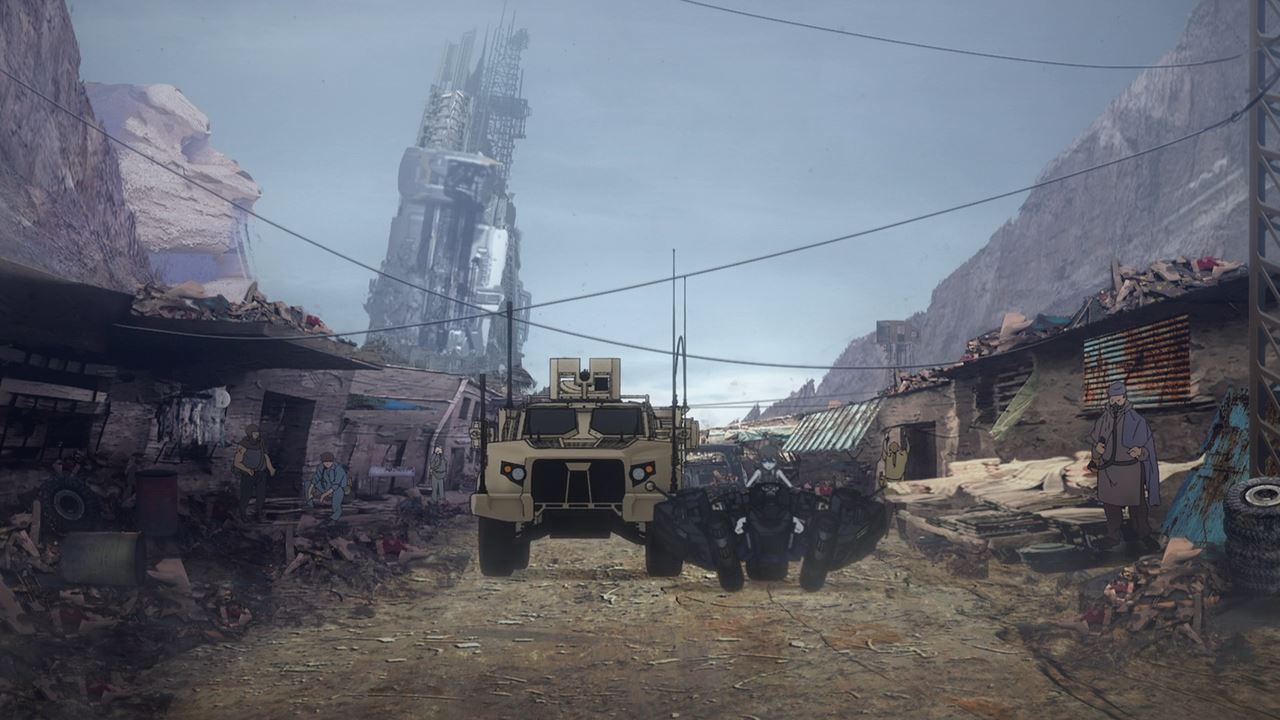 For now, Black Rock Shooter and both kids have finally arrived at the settlement where the surviving humans live, although some of them fight each for resources in order to survive, especially batteries where it’s valuable.

Oh yeah, they’re joined by the Colonel where he wanted Black Rock Shooter’s assistance to save humanity from Artemis. Then again, Empress might not listen to him after all. 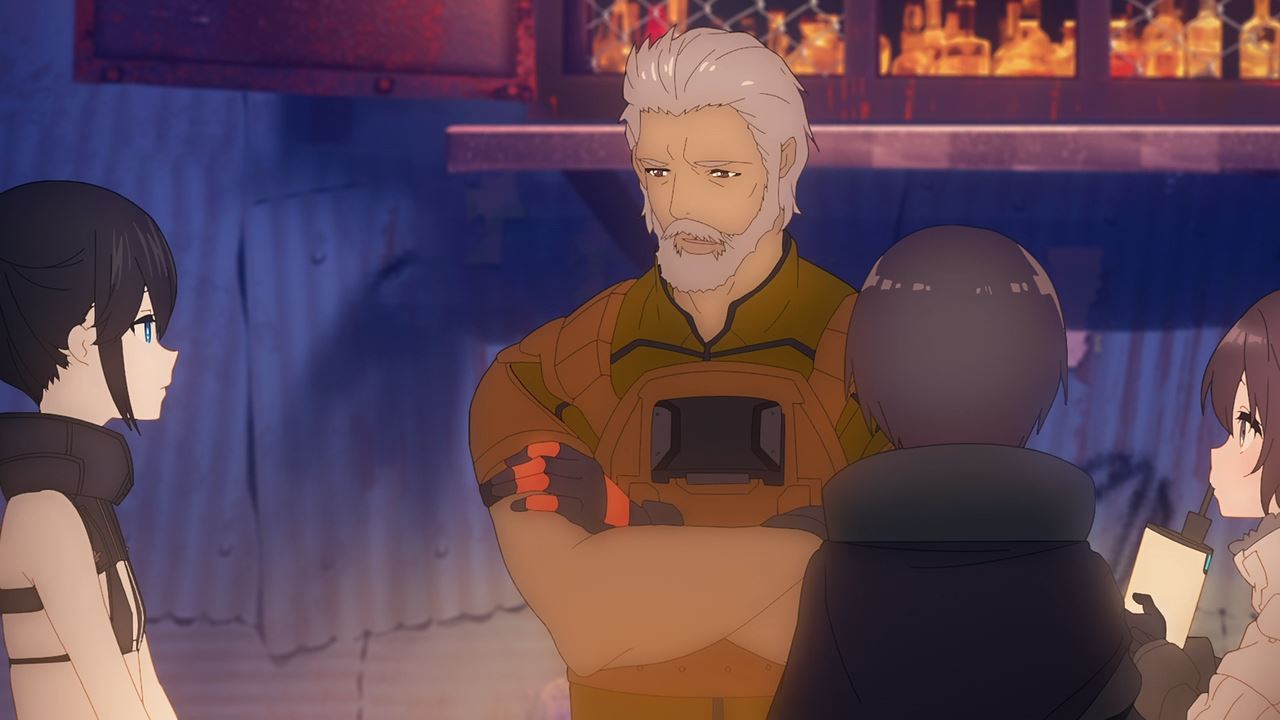 Also, there are places where they can breathe without a ventilator such as caves. Anyways, it’s time for some discussion on what will be their next destination.

While the Colonel wanted to go to the nearest base of the Peacebuilding Corps, Miya and Norito wanted to go to an abandoned hospital to gather suppliers. Oh yeah, let’s not forget about the Empress where she wanted to go to Lighthouse No. 8 so it’s a problem on which route they’ll go to. 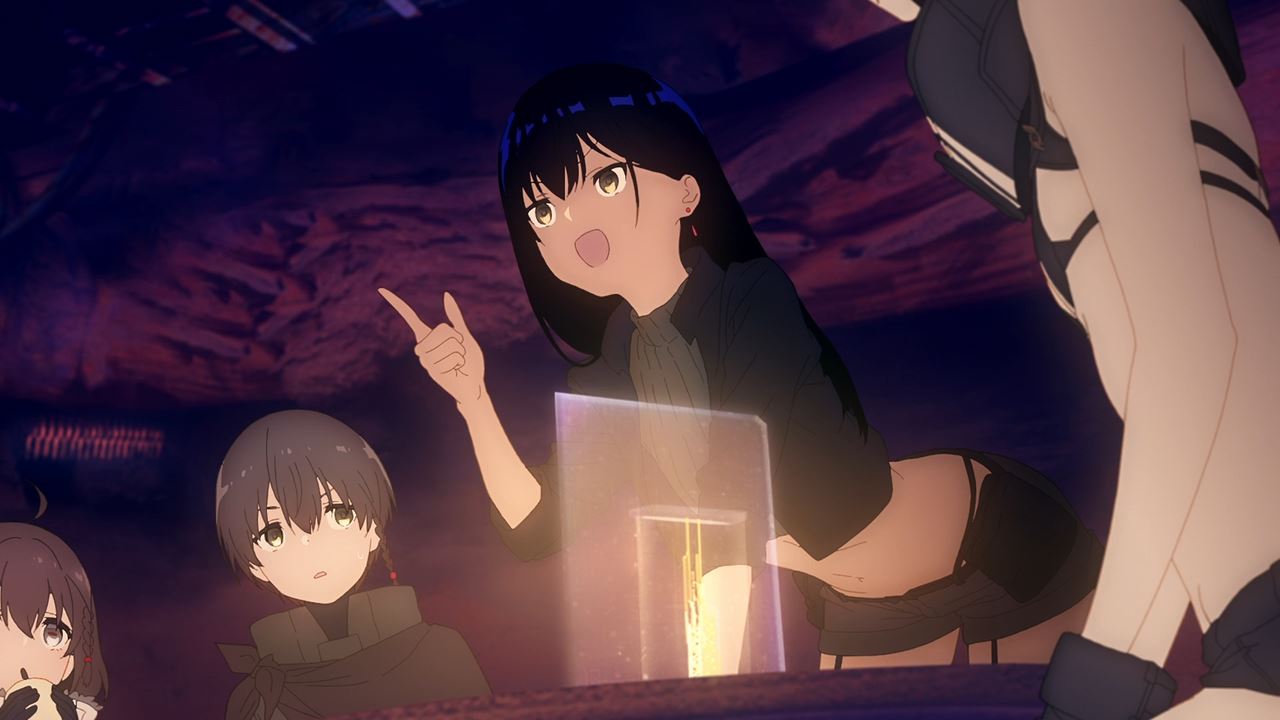 One more thing, I forgot to mention this woman who just butted in. This is Monica Kaburagi, a self-proclaimed hacker and mechanic who can help them find the nearest Peacebuilding Corps base.

Then again, Monica is really interested towards Black Rock Shooter, especially when it comes to copying weapons just by touching scrapped robots. Yeah, I’m pretty sure that this woman can’t be trusted. 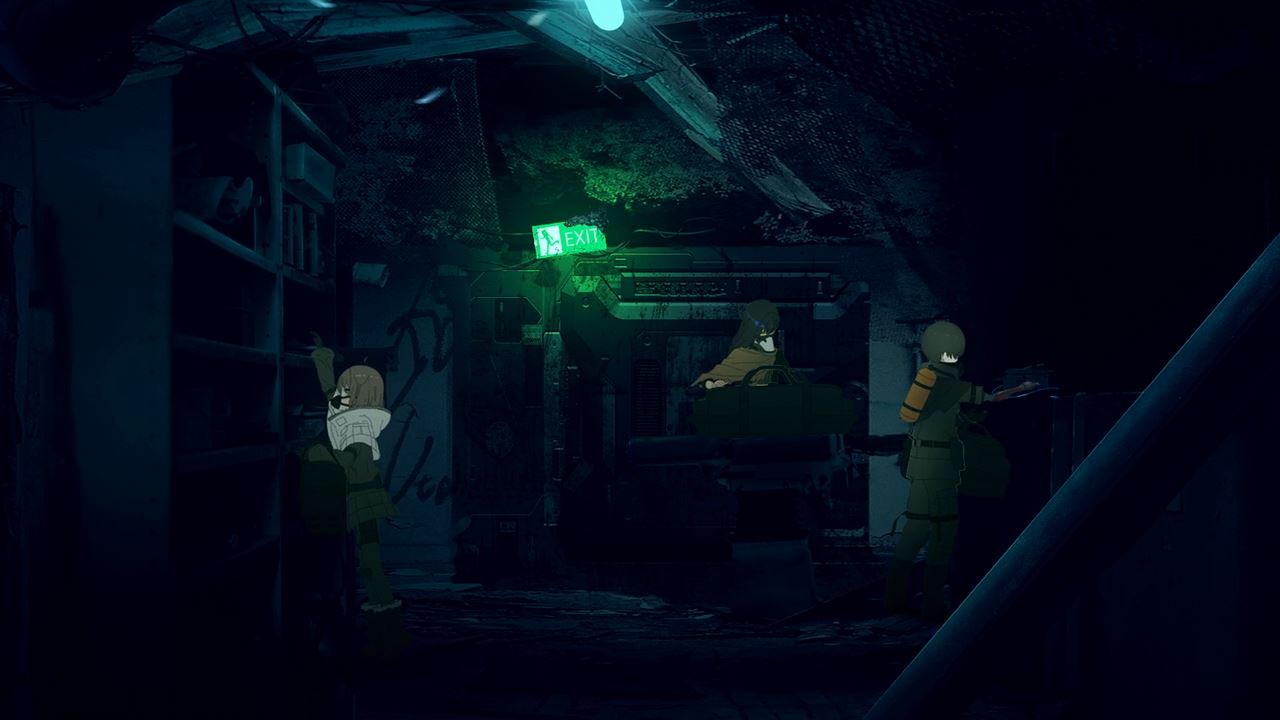 For now, they’ve agreed to go to the hospital first and gather supplies. C’mon, Miya and Norito needed some food and drink to survive. 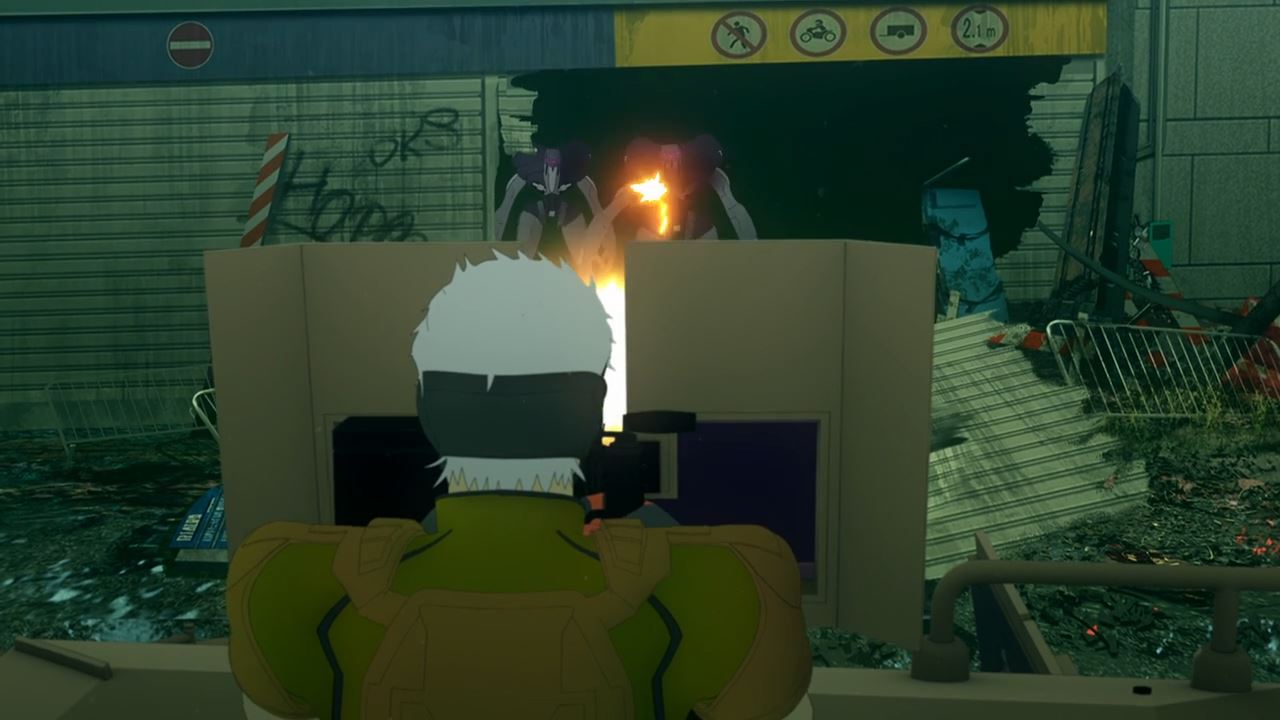 Oh yeah, there’s the Colonel where he’ll shoot down those robots who might kill those kids. 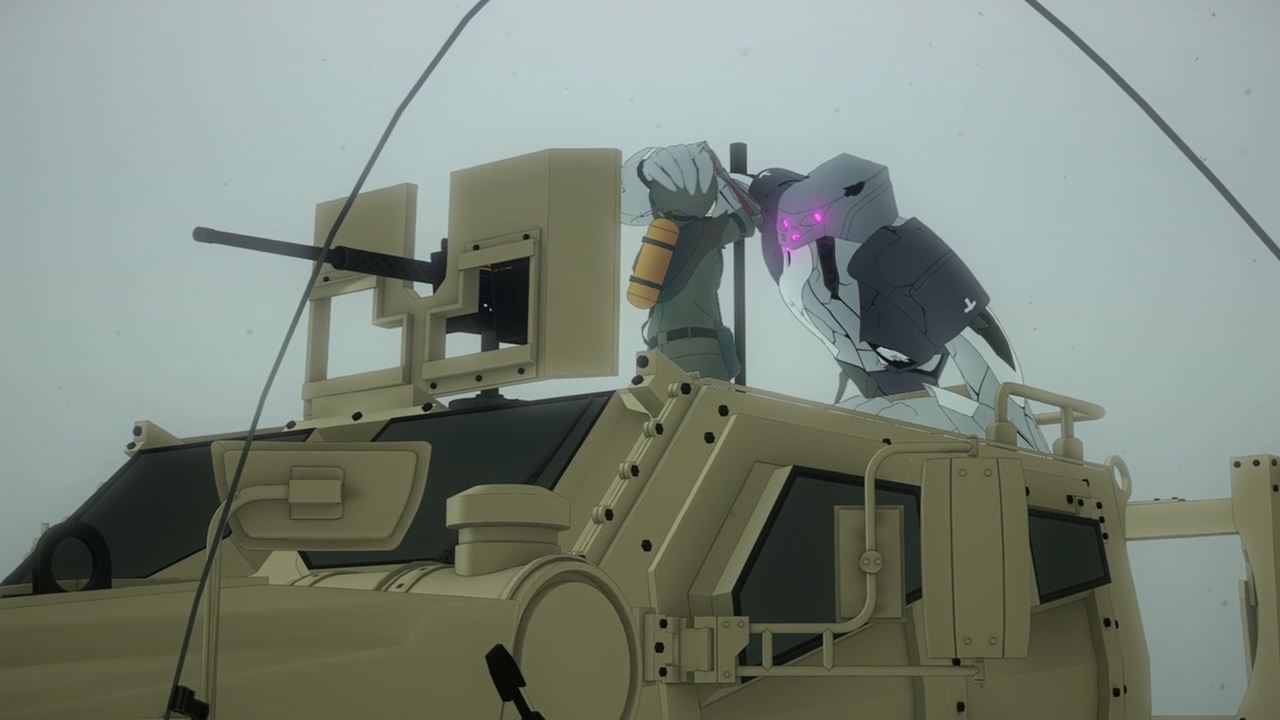 Oh wait, I spoke too soon as one of Artemis’ drones captured Norito. I’m worried that he might get killed on this episode. 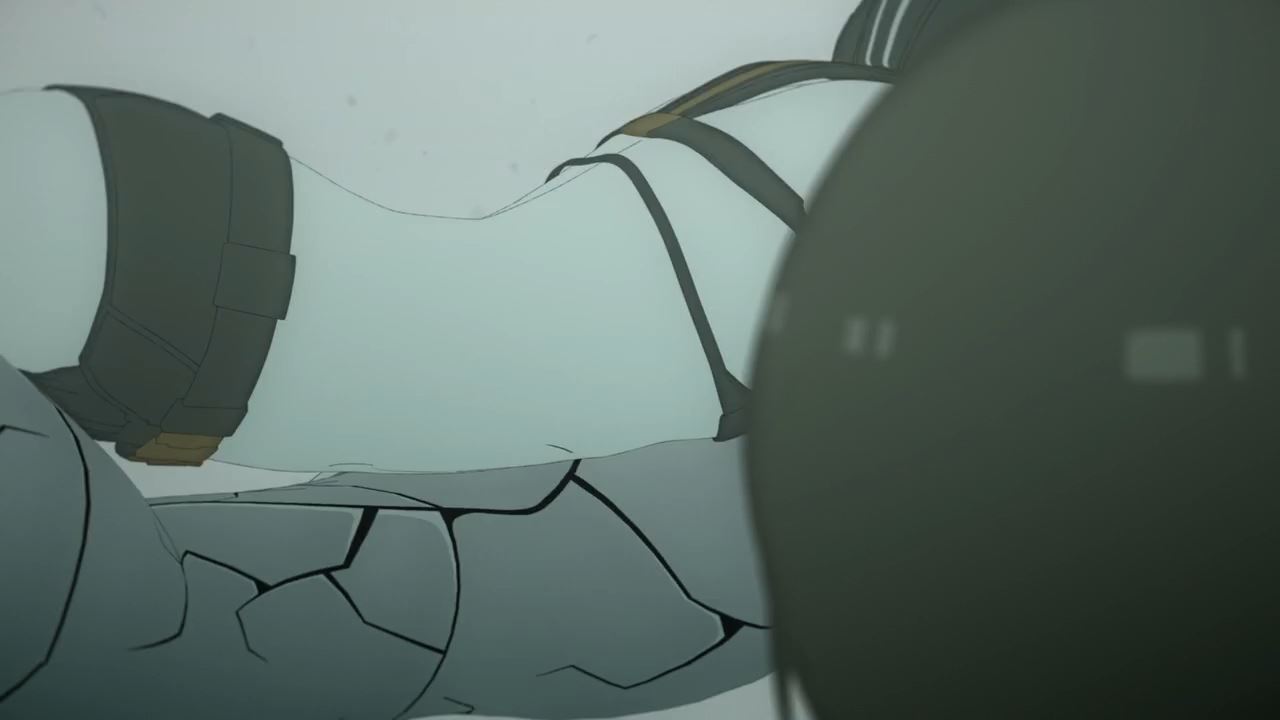 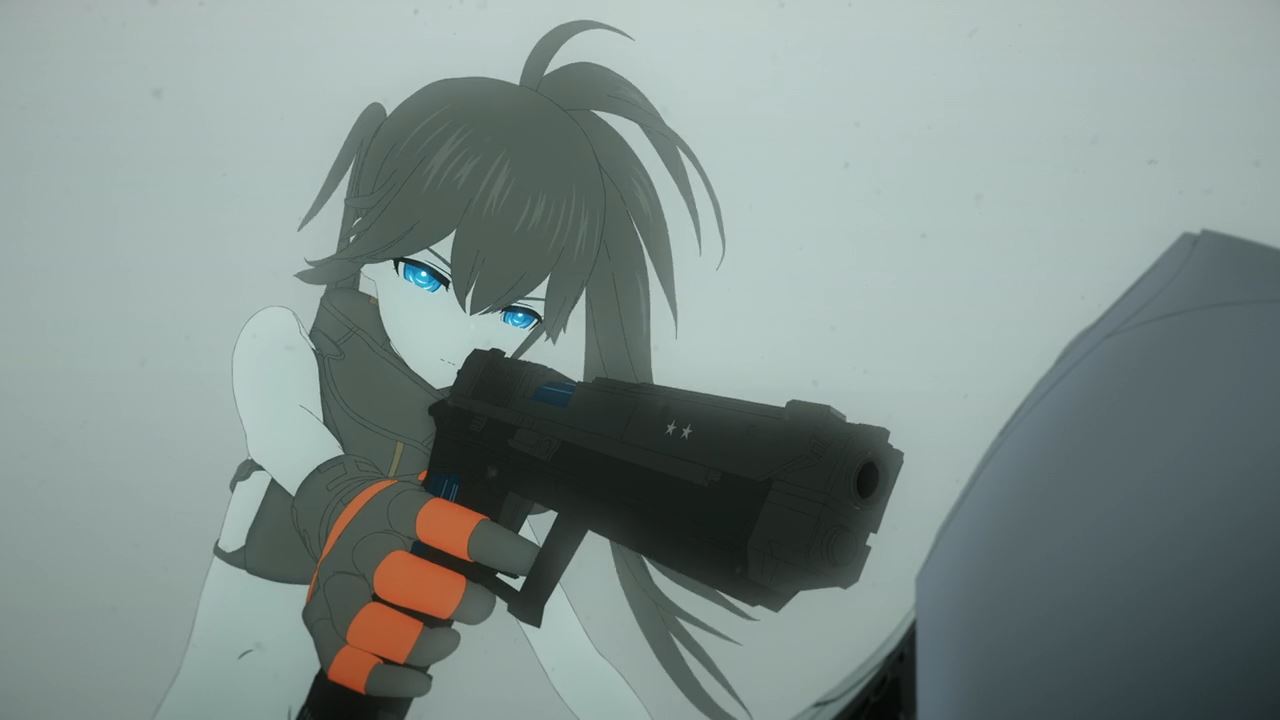 Fortunately, Norito was saved by Black Rock Shooter Empress where she’s about to shoot this drone down with her pistol. 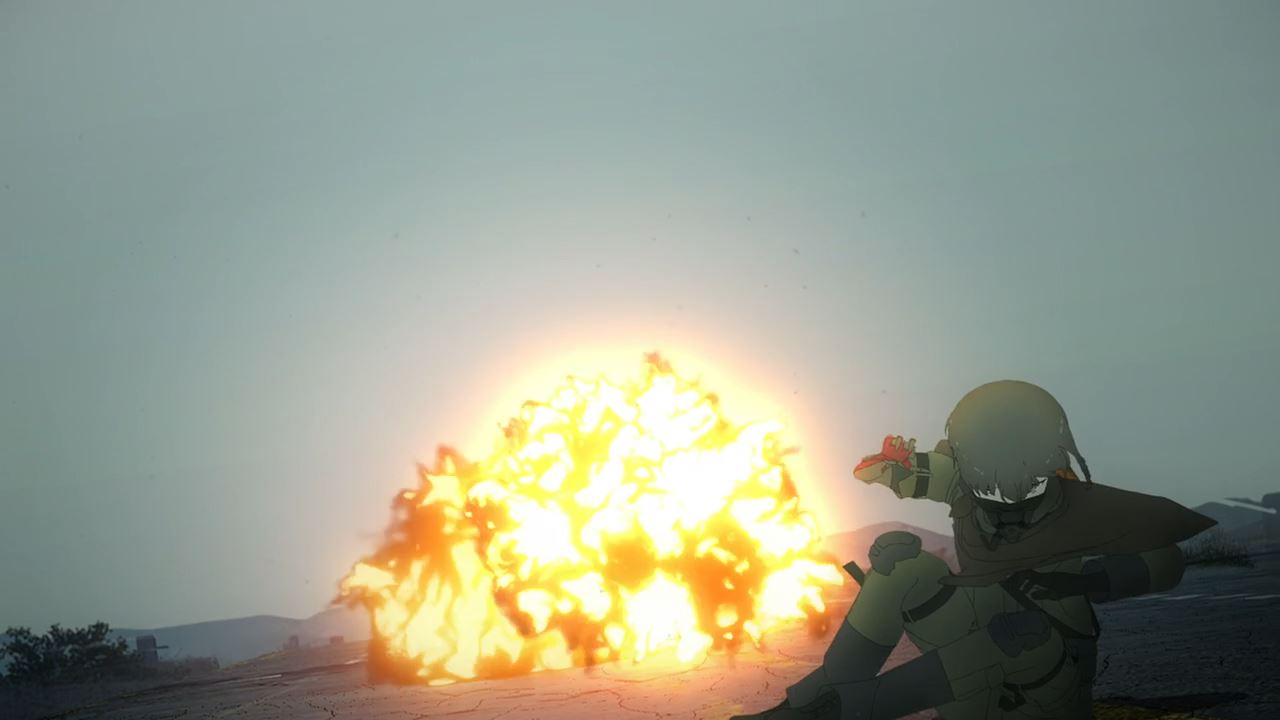 Until a swarm of bee drones attacked Empress. While Norito is safe, I’m scared that Black Rock Shooter might lose. 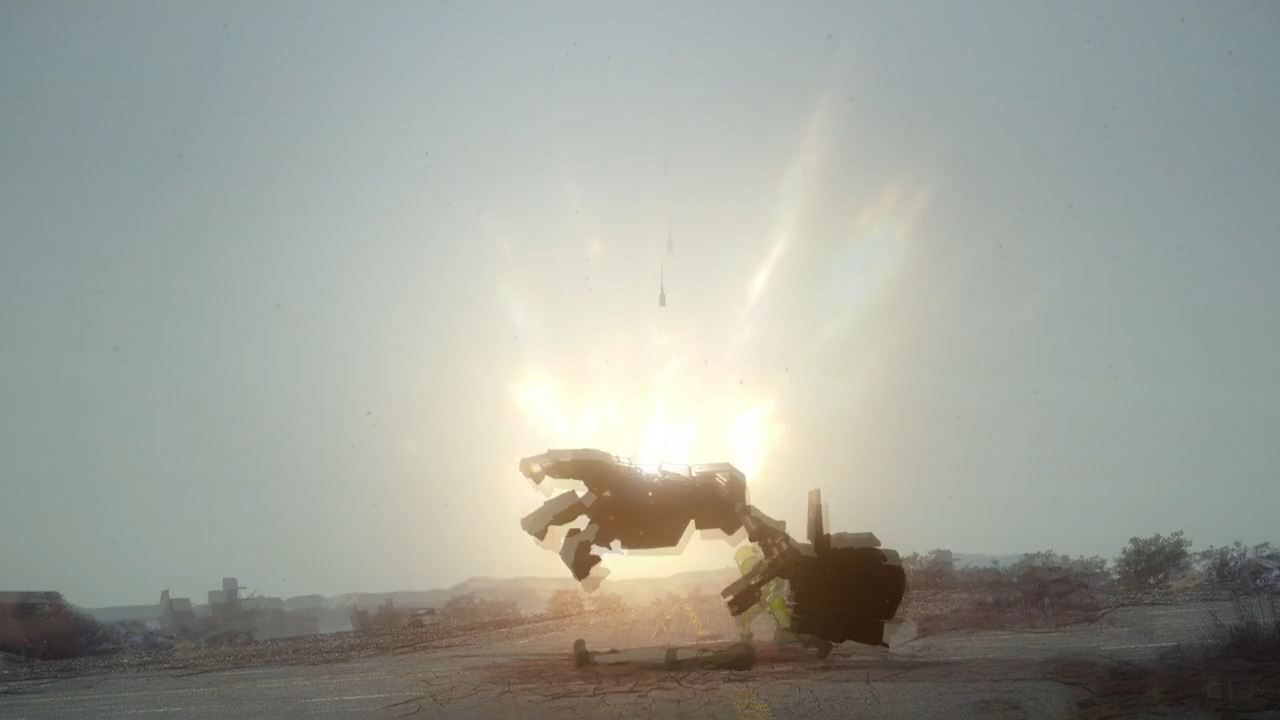 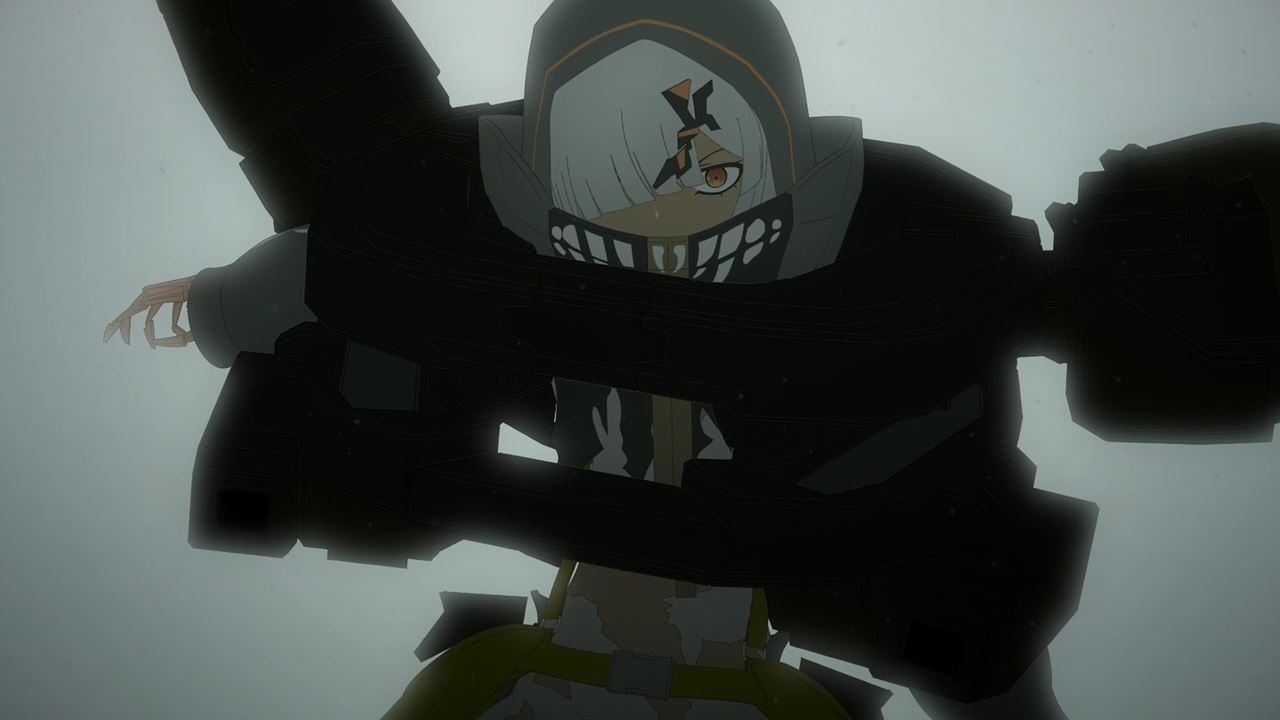 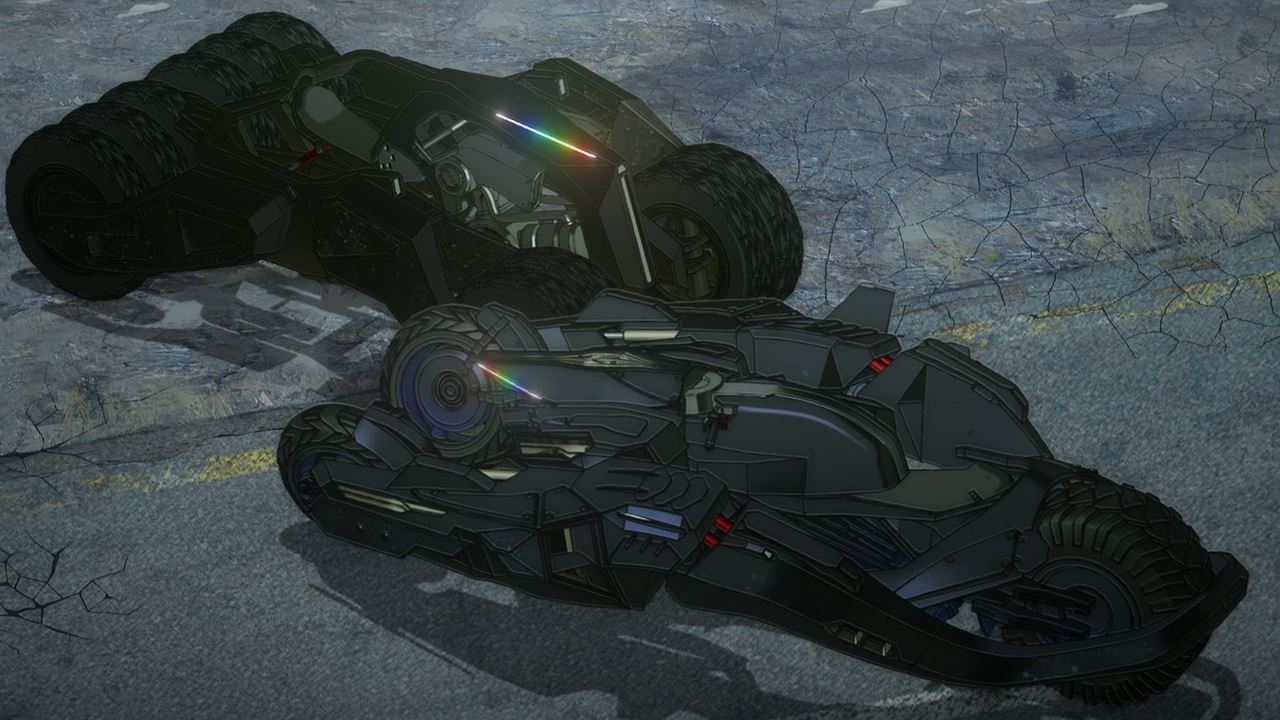 Speaking of Strength, it appears that she has her own bike, although I have a feeling that Strength’s bike didn’t tell her the truth after Artemis kicked her ass.

Regardless, Black Rock Shooter Empress is safe as she and her allies are done scavenging some supplies at an abandoned hospital. 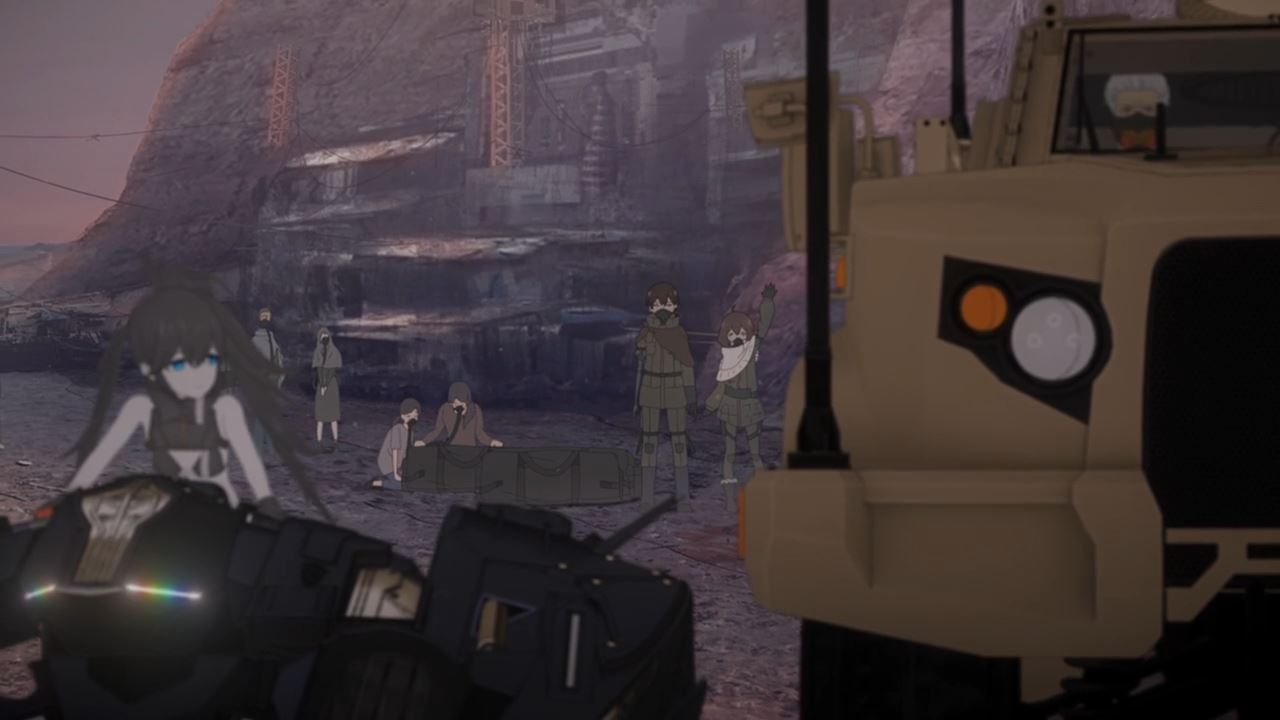 Sadly, this will be the last time we’ll see Miya and Norito as they won’t join the Empress on her journey towards Lighthouse No. 8. Sucks that I want these two kids to play with Black Rock Shooter when they’re not being attacked by robots. 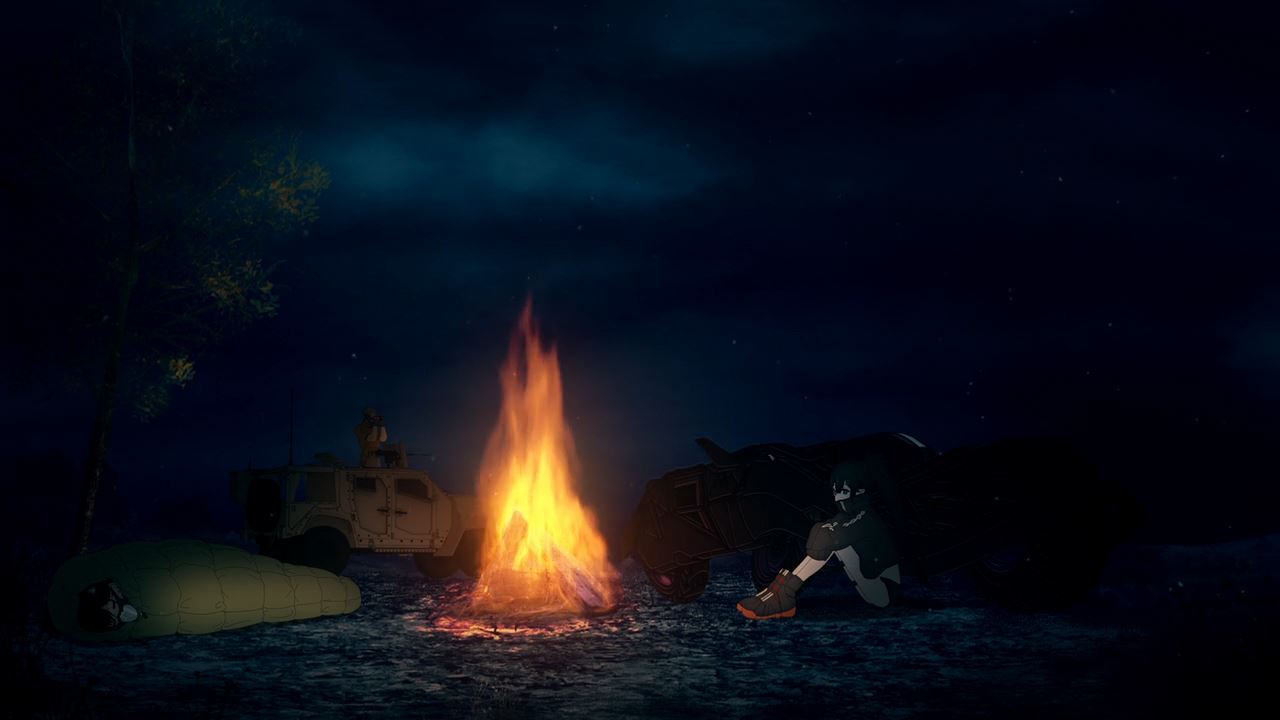 Speaking of Black Rock Shooter Empress, it appears that the Colonel and Monica Kaburagi joined her as their first priority will be finding a Peacebuilding Corps Base… if that one is still functioning of course. 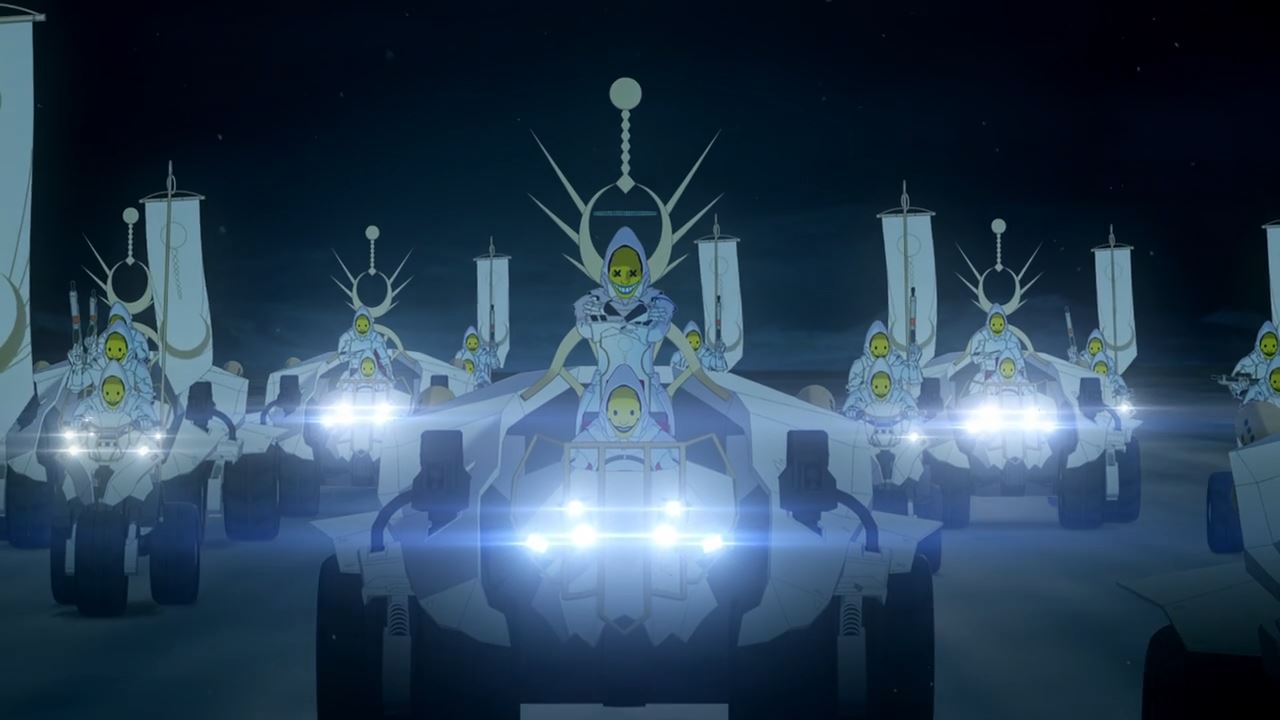 Unfortunately, looks like the Empress will be facing off some weird enemies like the Educational Institute where I bet that they’re also interested towards Black Rock Shooter.

Well then, it appears that it went from the Terminator to Mad Max. Anyways, I’ll see you next time!