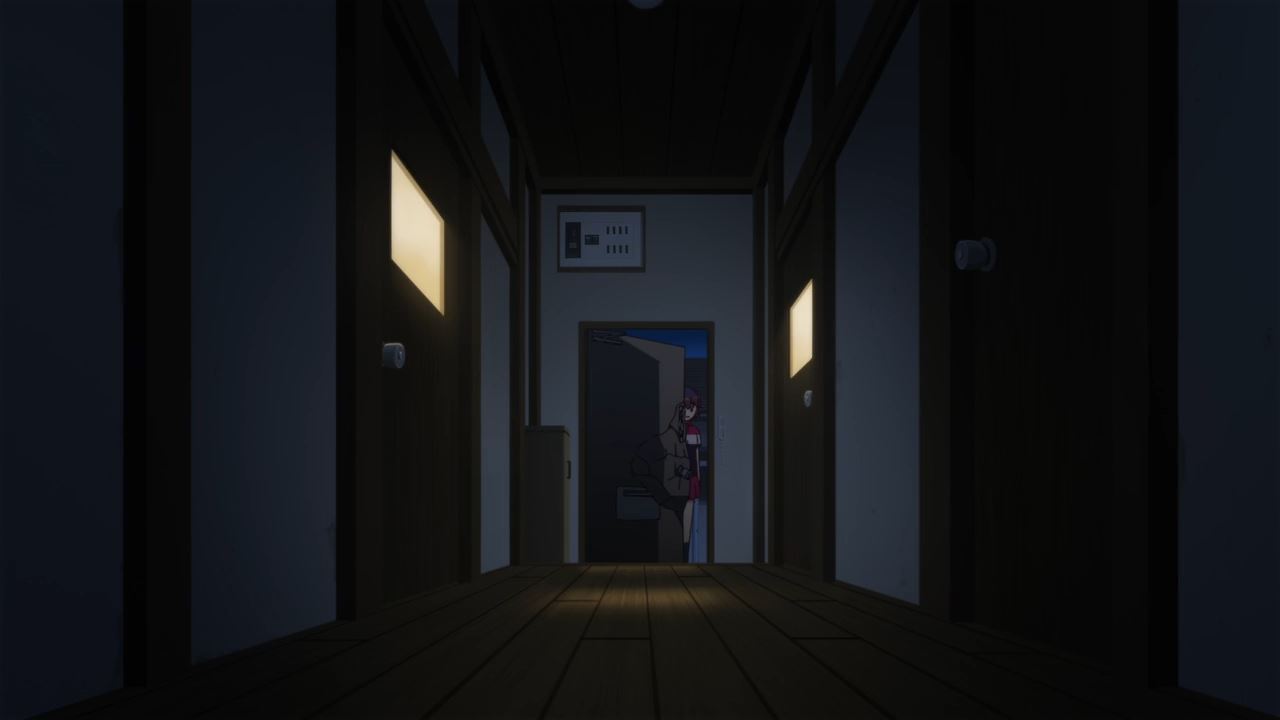 Let’s begin this final episode with Anri Sata where she went to Yuko Yoshida’s place to hang out. 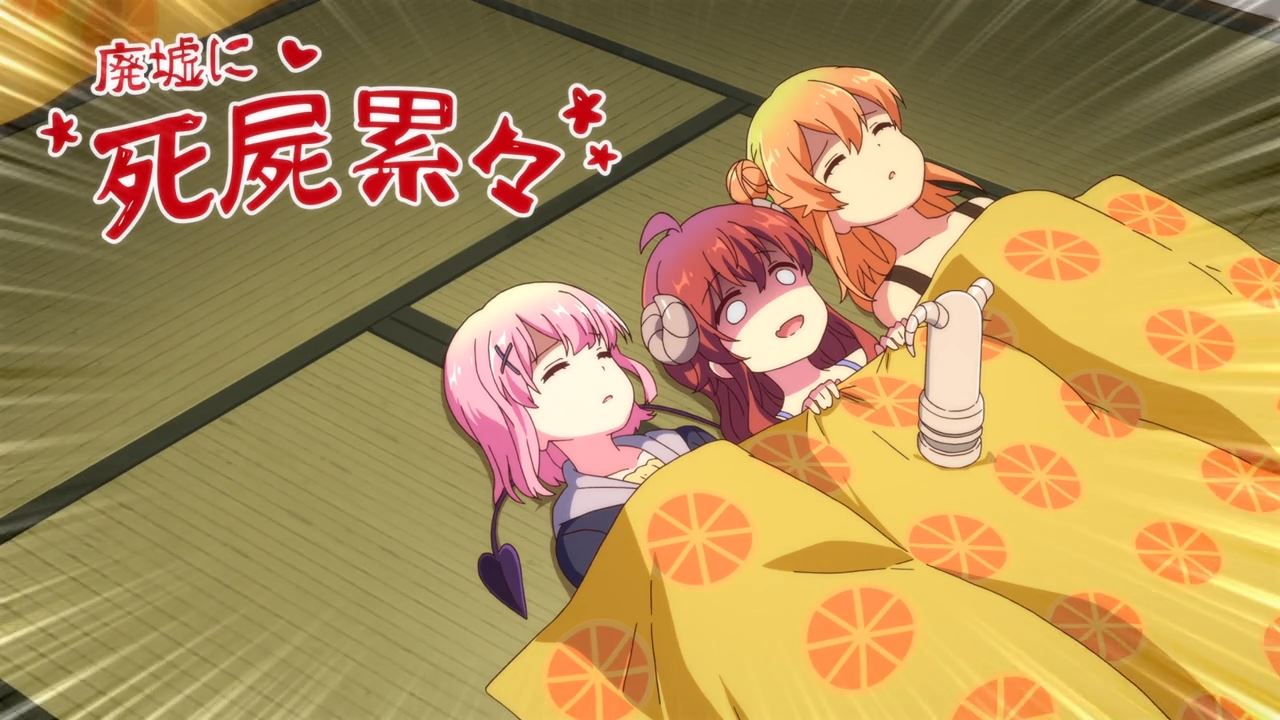 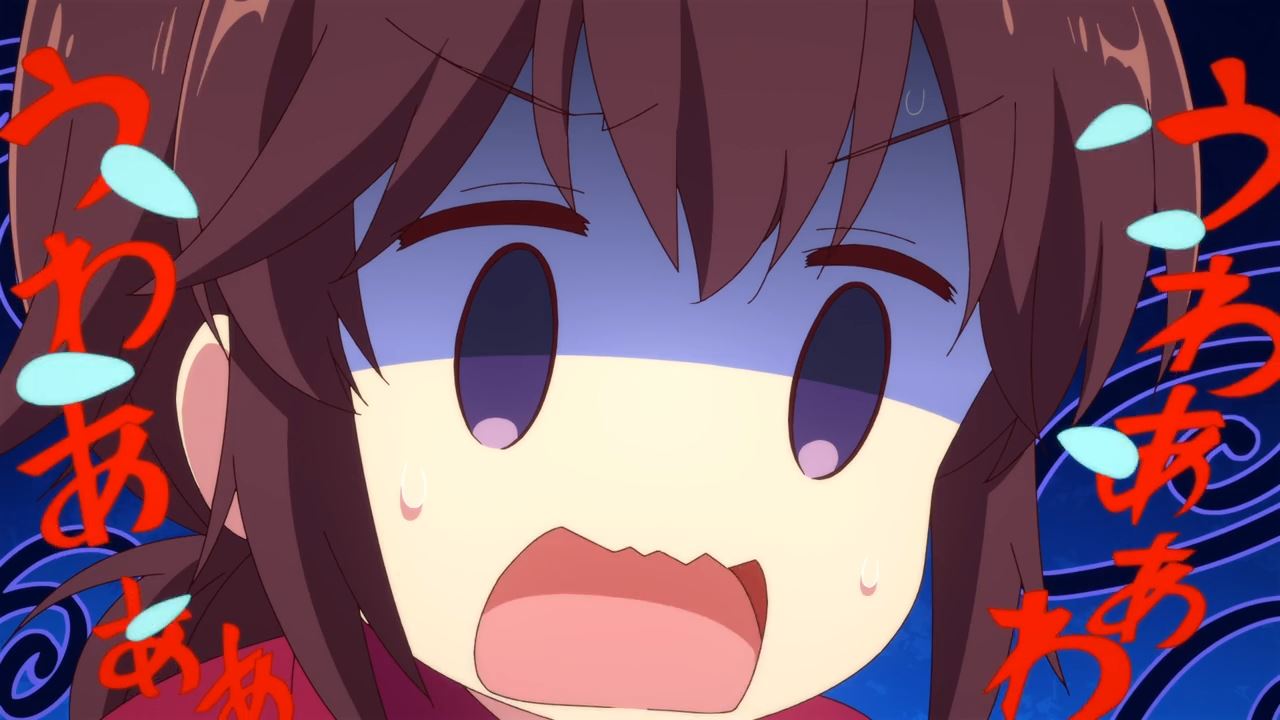 Unfortunately, Anri saw a murder scene where Shamiko, along with Momo Chiyoda and Mikan Hinatsuki, are lying in bed… sleeping. Yeah, they’re not yet dead!

Still, Shamiko and Momo need to rescue Mikan from her lingering curse as soon as possible. 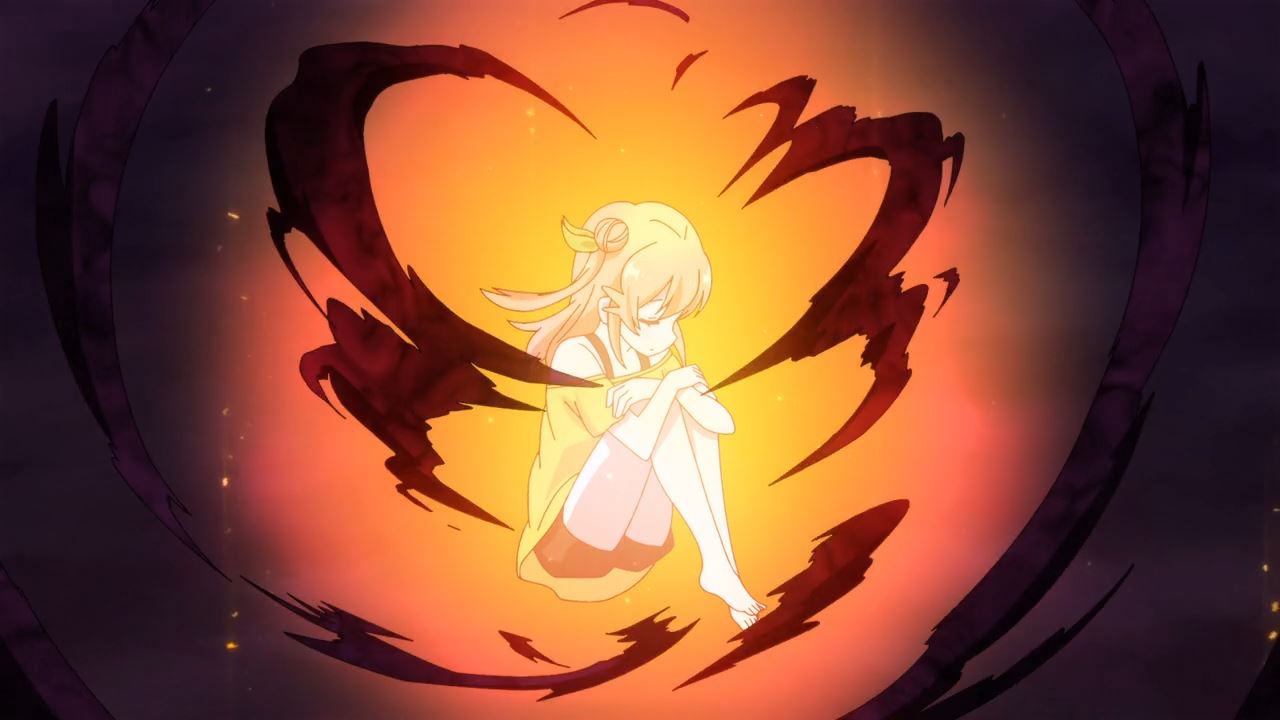 Speaking of Mikan Hinatsuki, her spirit is being engulfed in a dark matter. I have a feeling that it won’t let Mikan go without a fight. 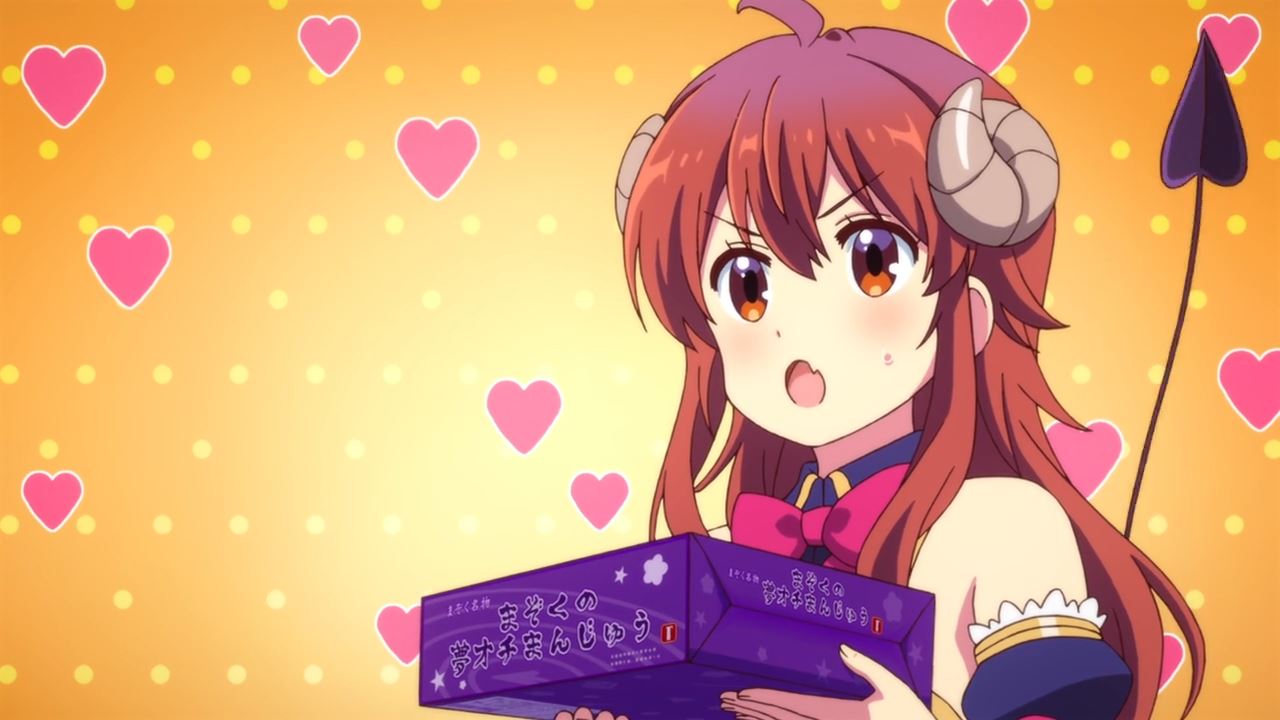 Now then, looks like Shamiko tries to convince this dark matter with a peace offering while speaking English. Um Shamiko, that won’t work! 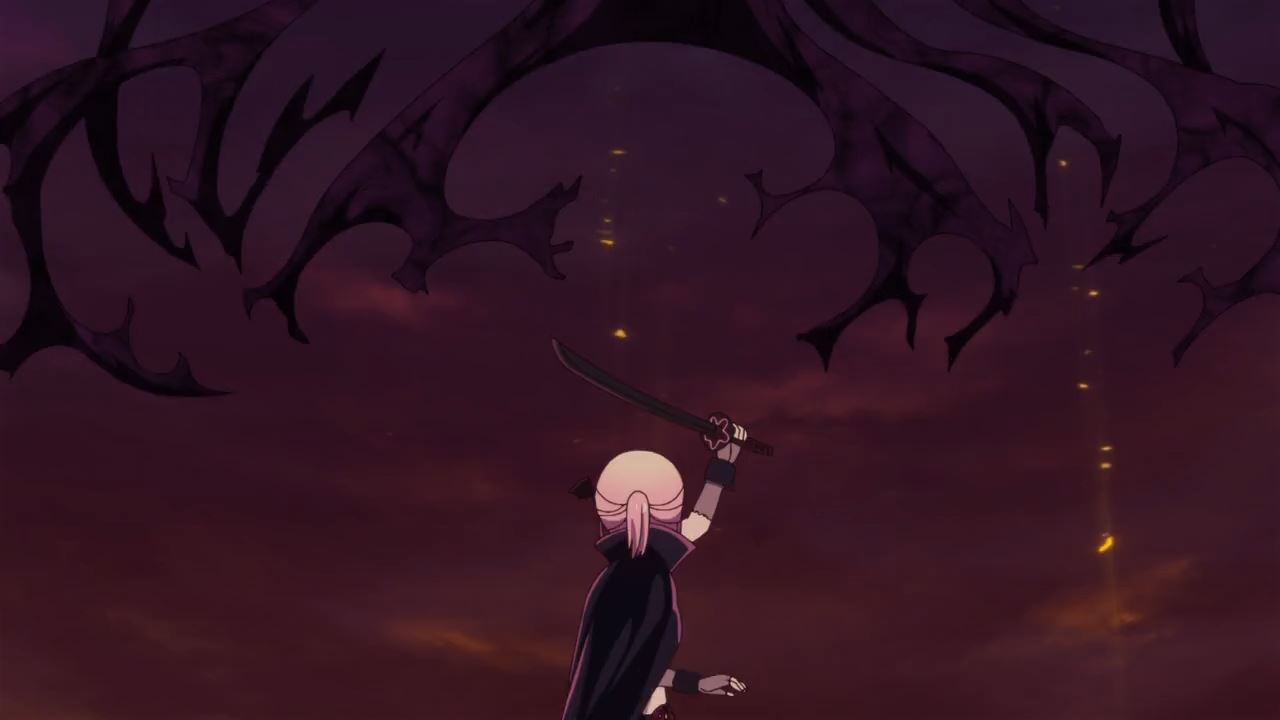 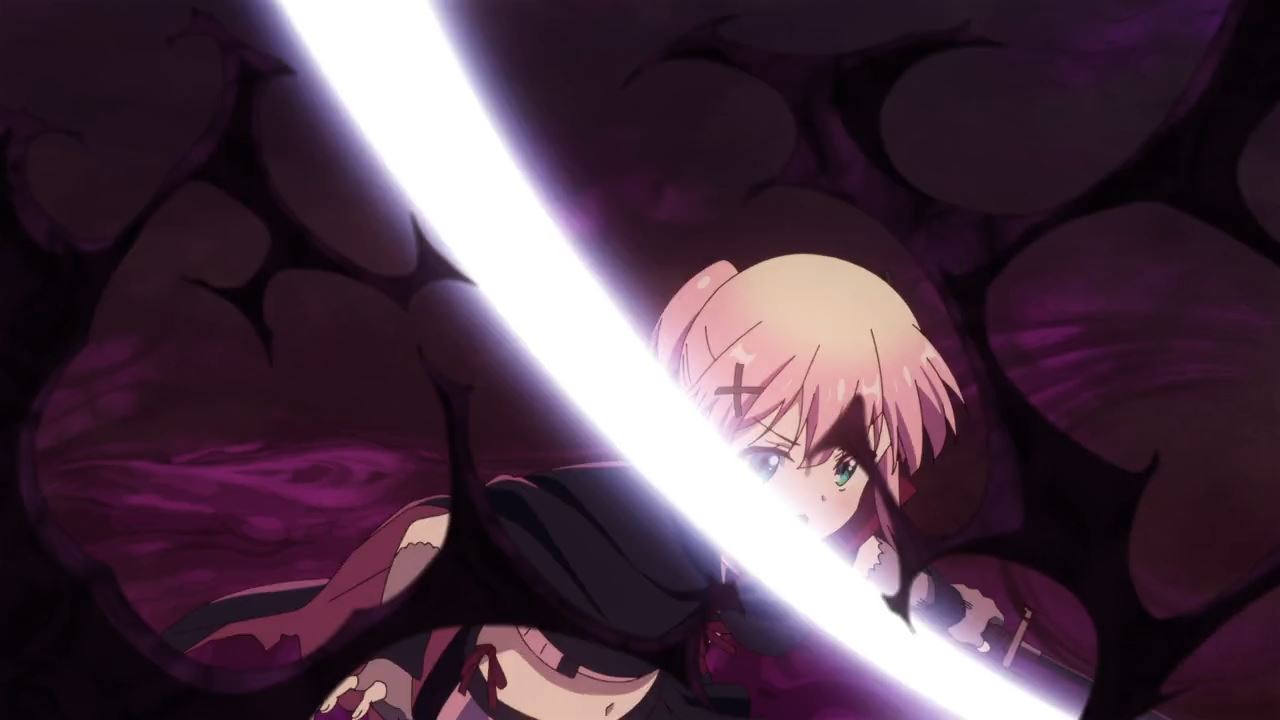 Anyways, the dark matter retaliates where Momo Chiyoda uses her sword to defend herself and the shadow mistress. I have to say that she’s getting the hang of being the dark magical girl. 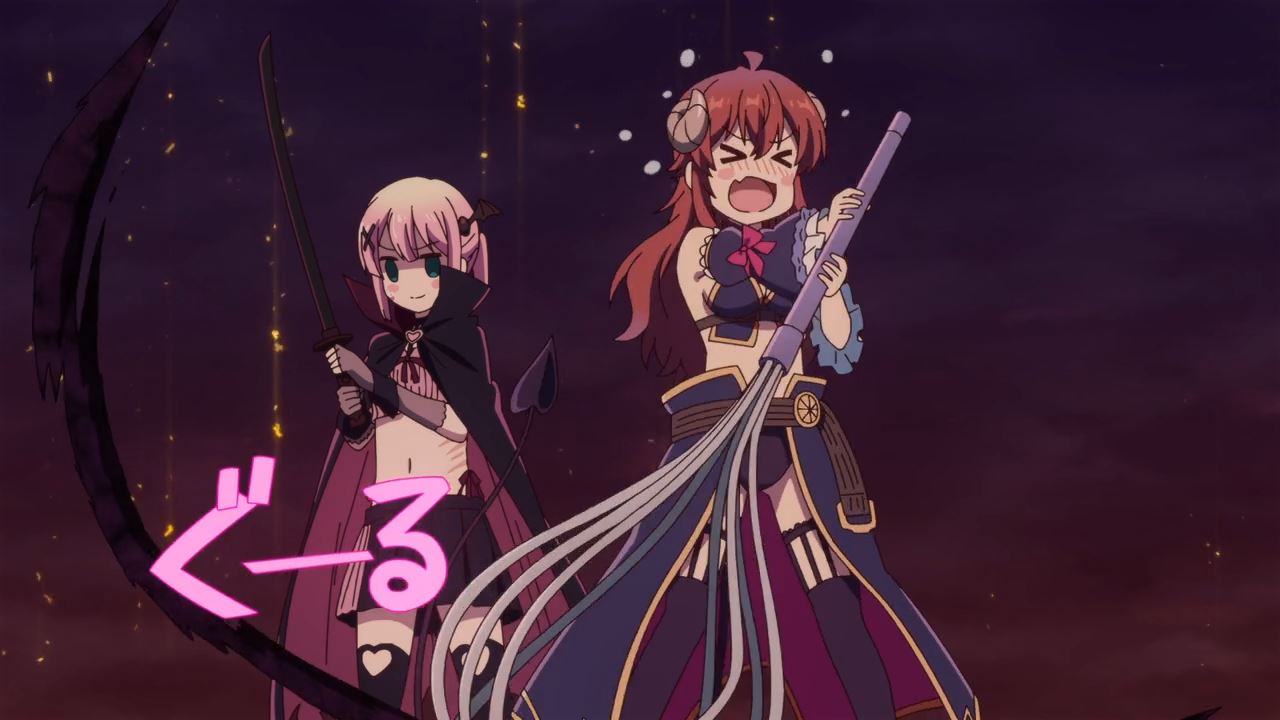 Meanwhile, looks like Yuko transforms her magical fork into a giant whisk as she mixes the dark matter, just like how she whisks the eggs to make a cake. 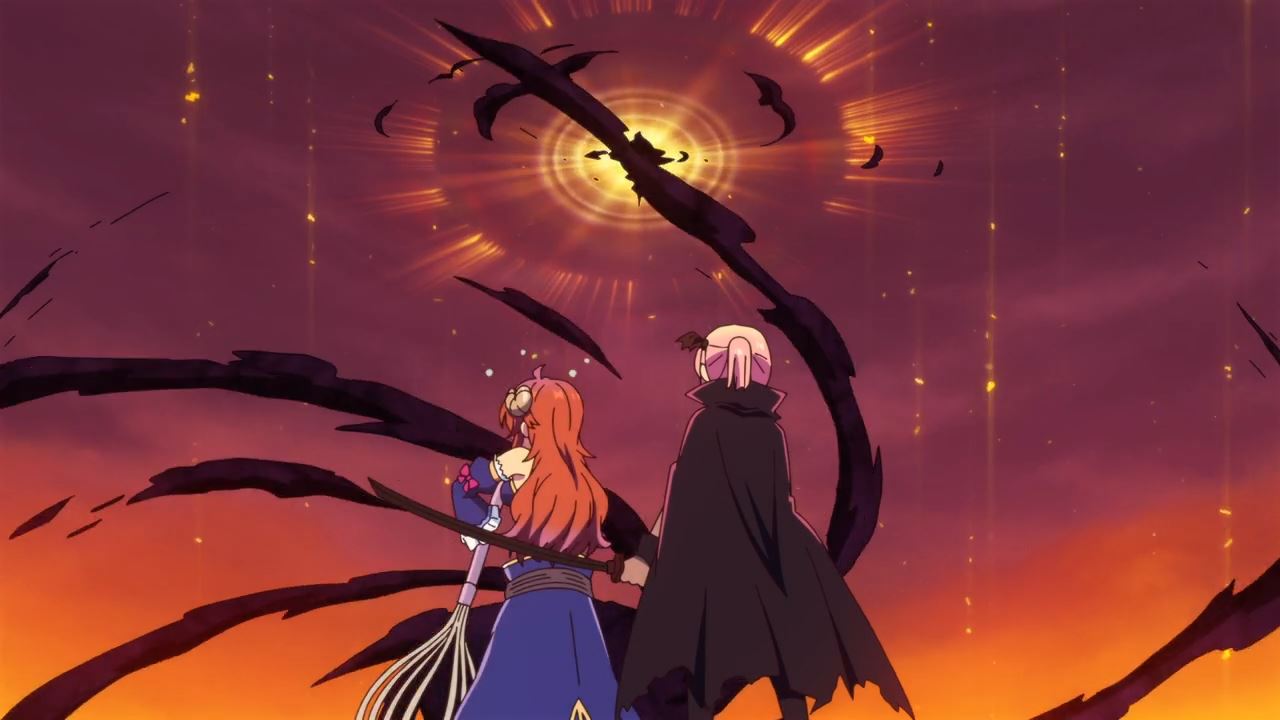 Still, it appears that Shamiko’s method is working as the dark matter surrounding Mikan Hinatsuki is starting to disappear, all while it’s gathering into a single spot. 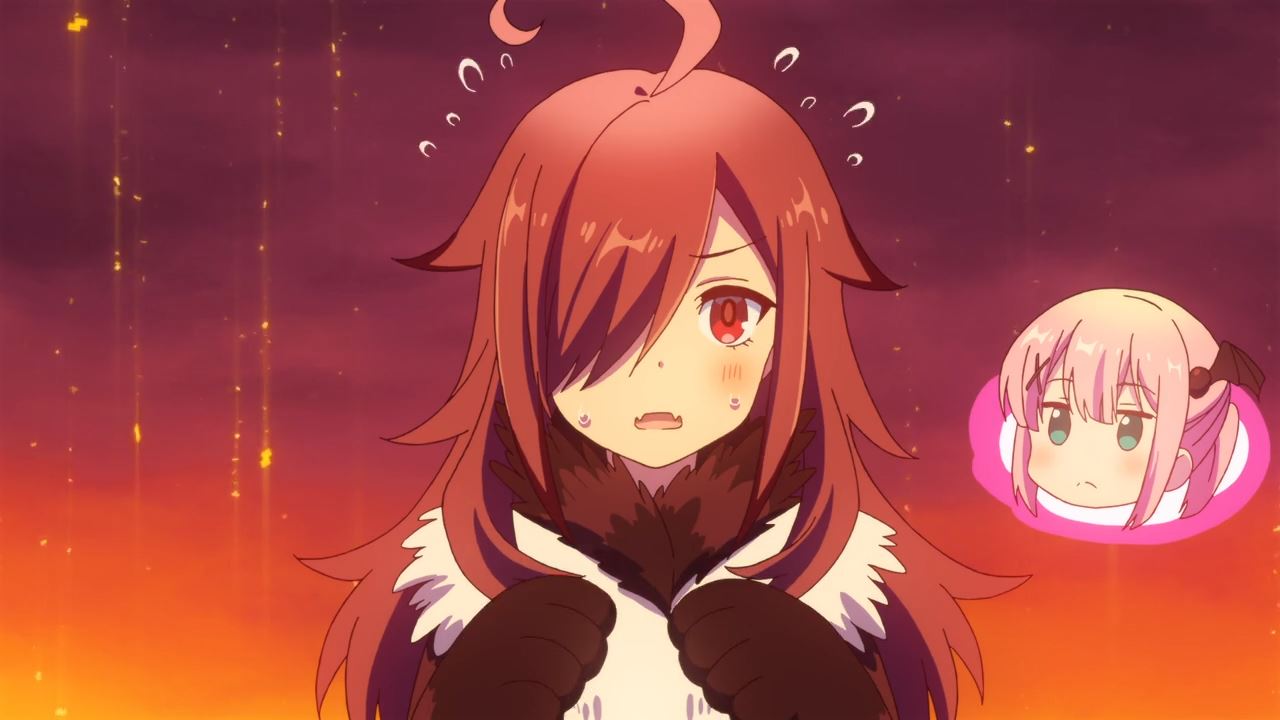 After whisking the dark matter away from Mikan, it transforms into this humanoid creature name Ugallu.

Well, this is the creature that Lilith mentioned in the previous episode, yet I wonder why did she exists inside Mikan Hinatsuki’s body? 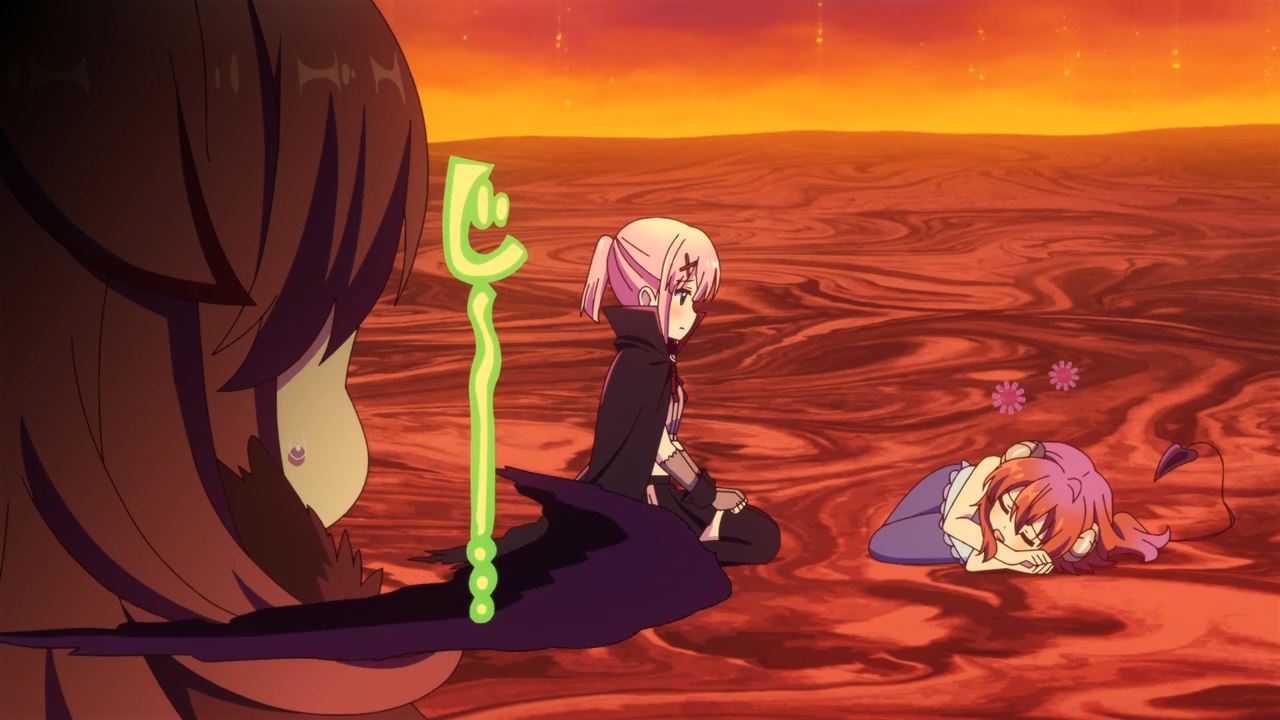 Meanwhile, looks like Shamiko got really tired after whisking the dark matter into Ugallu. I guess that took her toll into transforming her fork into a giant whisk. 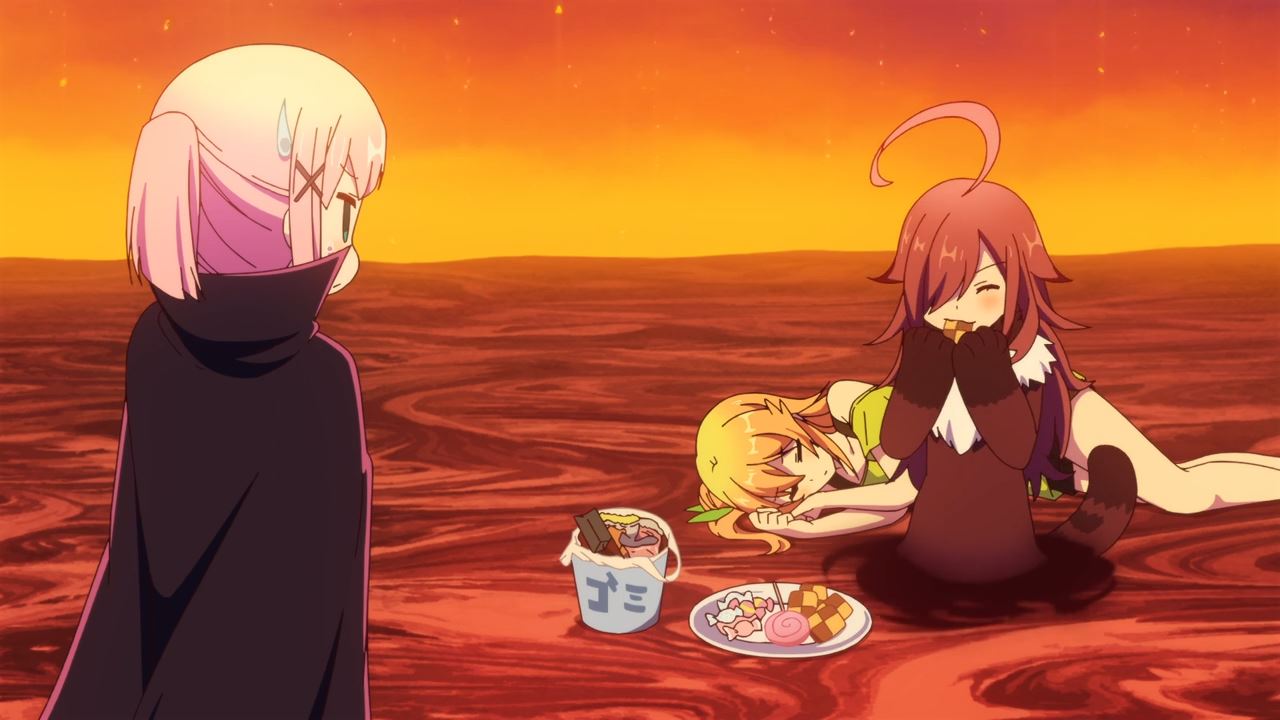 Also, Shamiko used her magic to summon food ’cause it turns out that Ugallu is really hungry.

Now then, it turns out that Ugallu’s task is to defend Mikan Hinatsuki from danger as some mindless beast, but Ugallu became sentient where it did more harm than good. Hence, you see some unnatural phenomenon whenever she’s excited or scared. 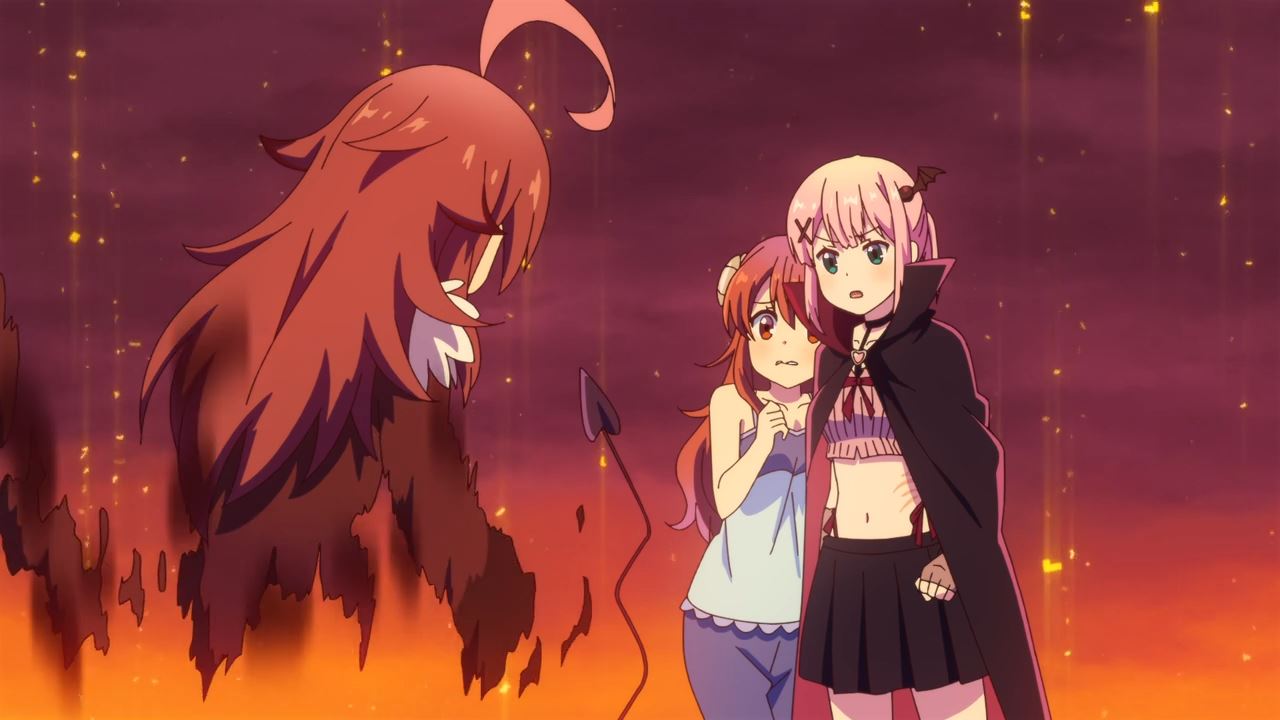 But speaking of Ugallu, looks like she realized that she’s treated like a nuisance as the familiar is starting to disappear. Okay, this is getting depressing as Shamiko and Momo tries to stop her. 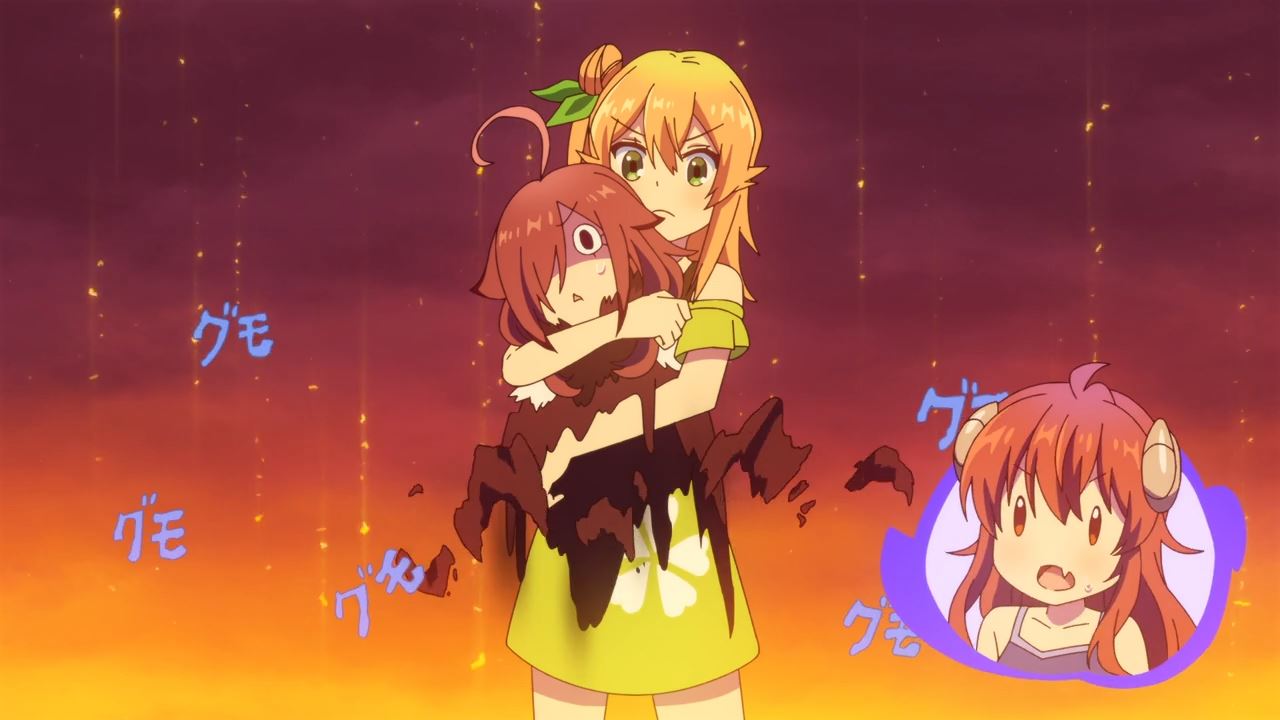 However, looks like Mikan Hinatsuki grabs Ugallu where she doesn’t want her familiar to leave.

Sure that it’s her fault for bringing misfortune onto others whenever she’s expressing some strong emotions, but Mikan considers Ugallu as a friend. But seriously, how did she manage to wake up from her own dream? 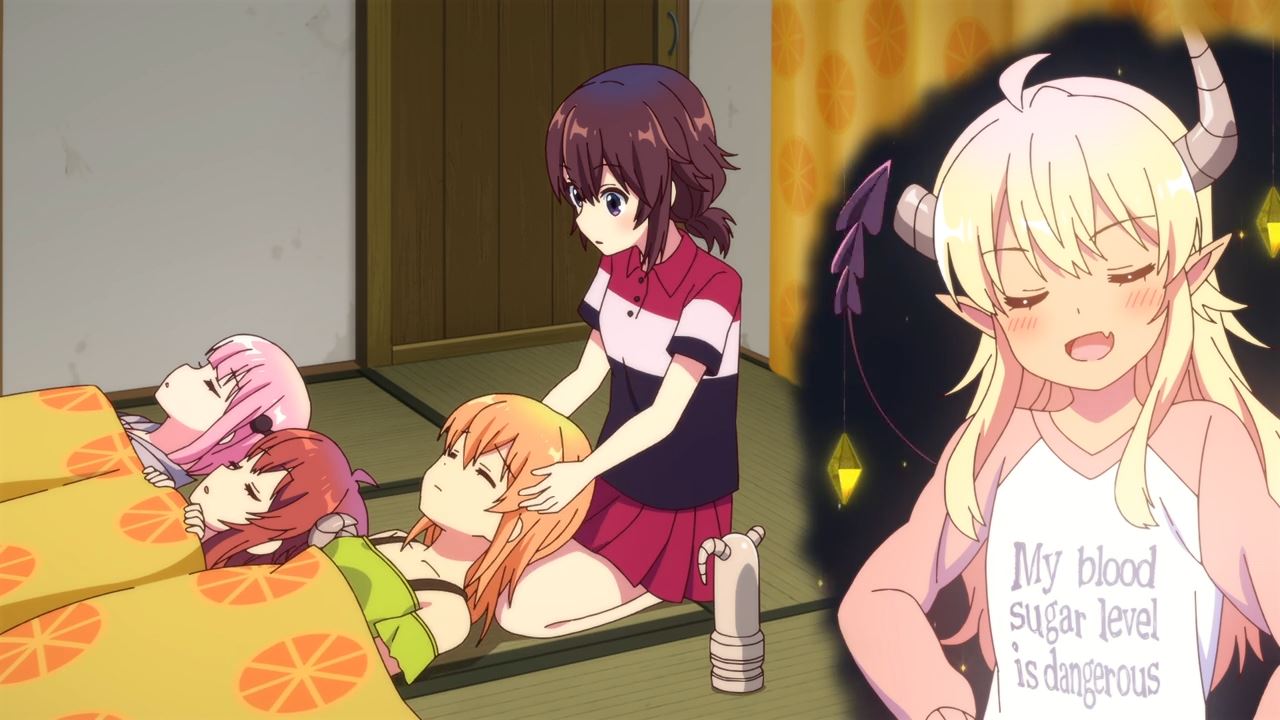 Oh, looks like Anri Sata is helping both Yuko Yoshida and Momo Chiyoda as Lilith instructs Anri to make Mikan half-asleep. It’s no wonder why she grabbed Ugallu’s body. 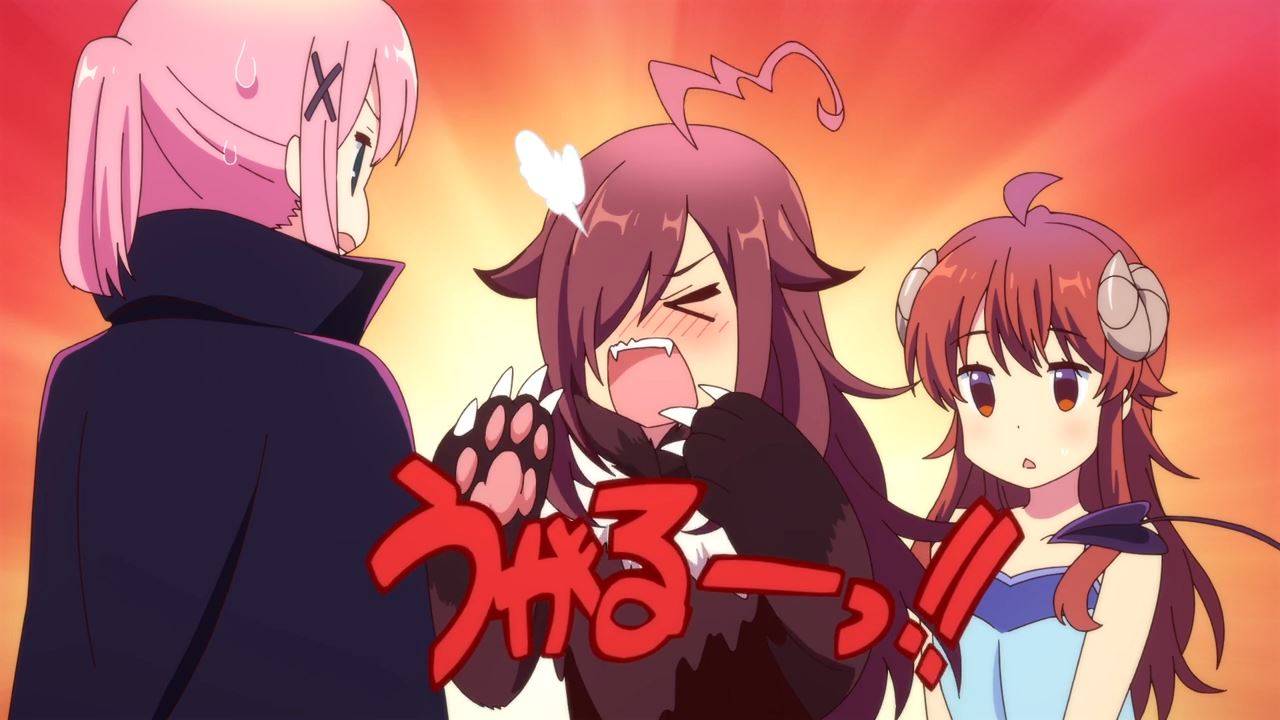 But let’s move onto Ugallu where she has one little complain: She hates eating food with lots of citrus. Oh, seems that this creature doesn’t want to eat some orange-flavored meat. 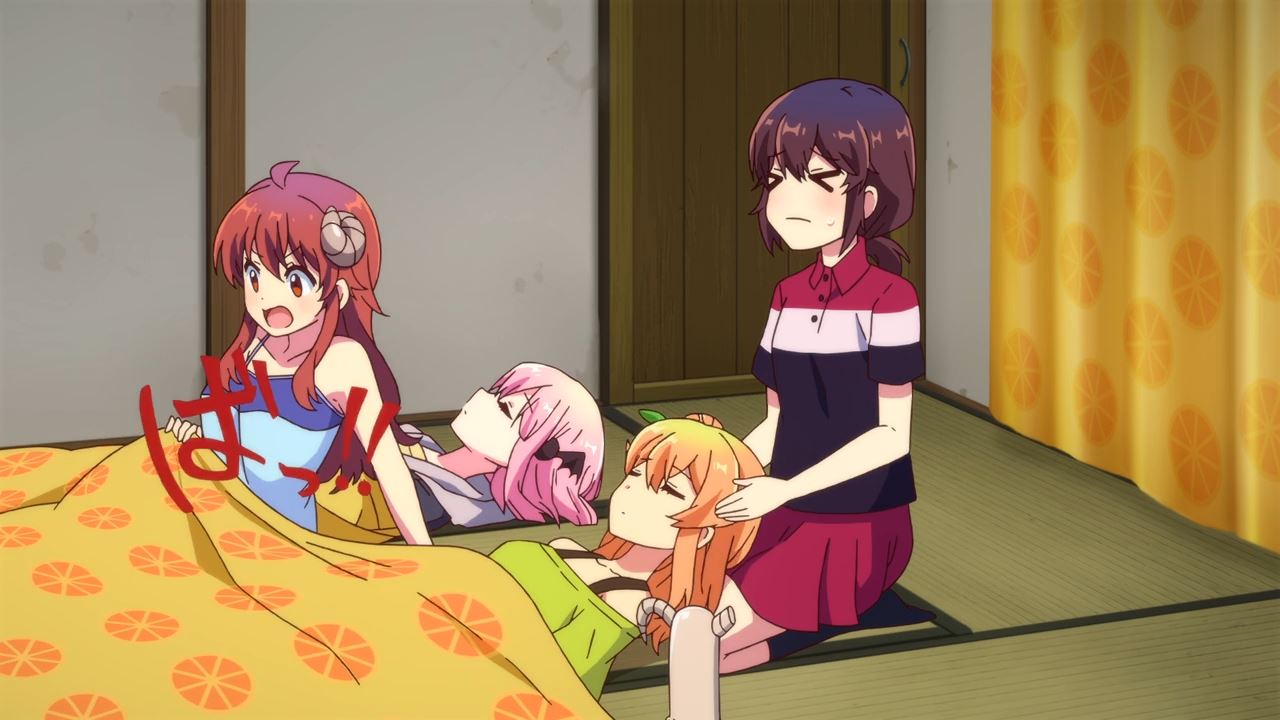 Now then, I think it’s time to rescue Ugallu from being stuck inside Mikan’s body as Shamiko wakes up from her slumber.

Of course, she needs Sion Ogura for assistance as her friend knows everything related to the occult. 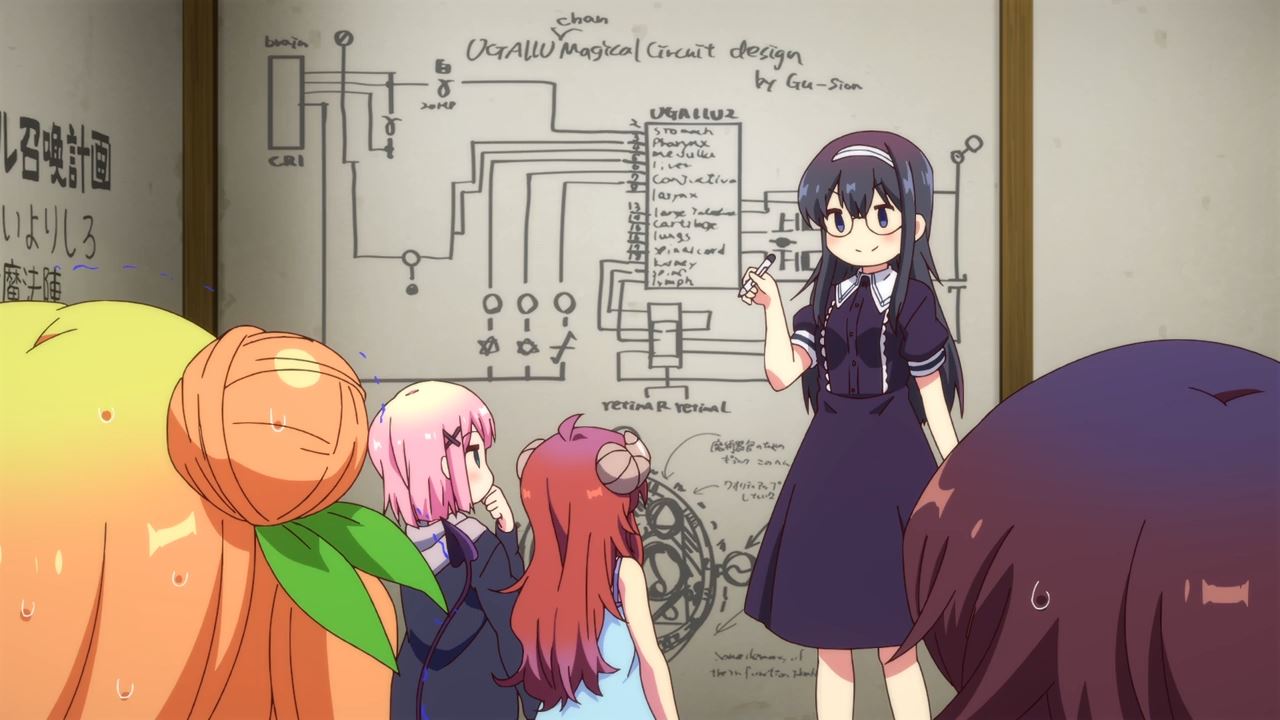 Speaking of Sion Ogura, here she is where Sion explains the most complicated way to bring the creature to the real world.

This involves gathering special foods and rare materials which it won’t be found in Tama City. Oh, and there’s a time limit so they need to summon Ugallu to the real world as soon as possible. 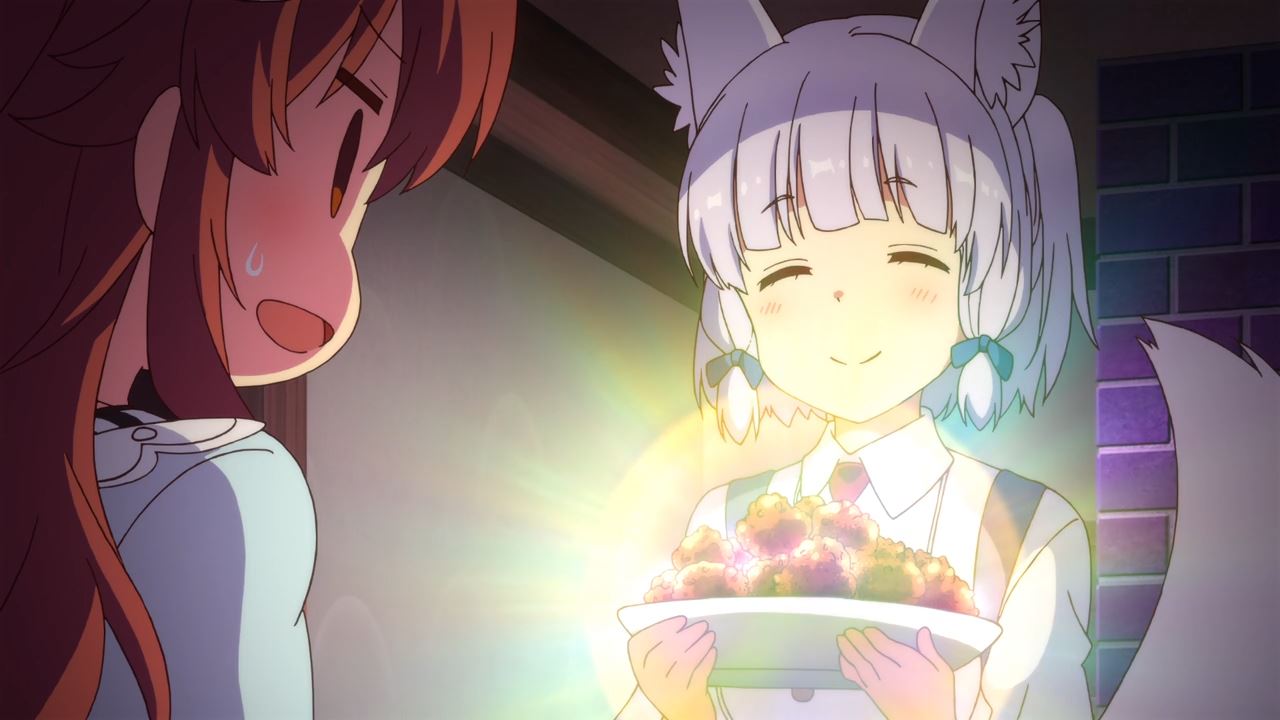 Fortunately, there’s one person who can do the impossible. That’s right, it’s Lico where she can cook meals filled with her mana.

Of course, there’s one more requirement which is getting an item from a mythical beast. 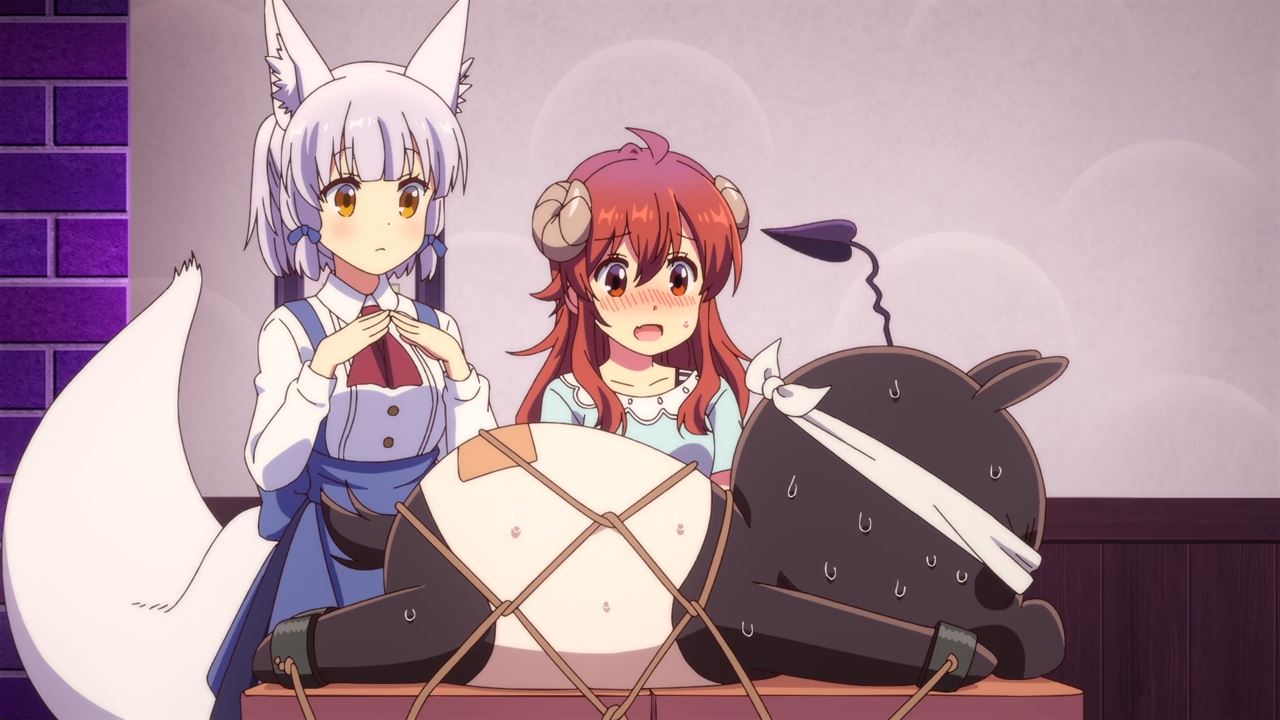 Fortunately, there’s Shirosawa where this tapir has a special mana-filled tail, although it needs to be plucked out from his body. 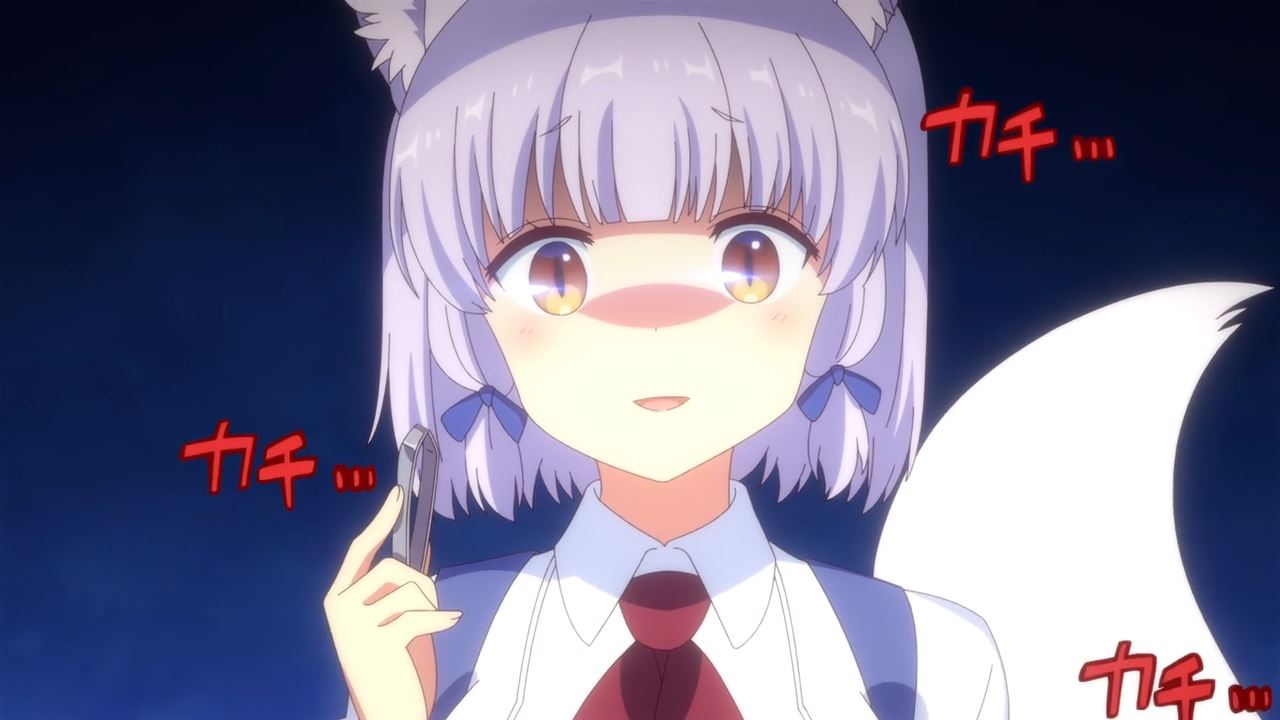 But not to worry though as Lico will do just that, albeit it’ll be gruesome to see it. Let’s pretend that Lico pulled one of the tail fur strands from her boss. 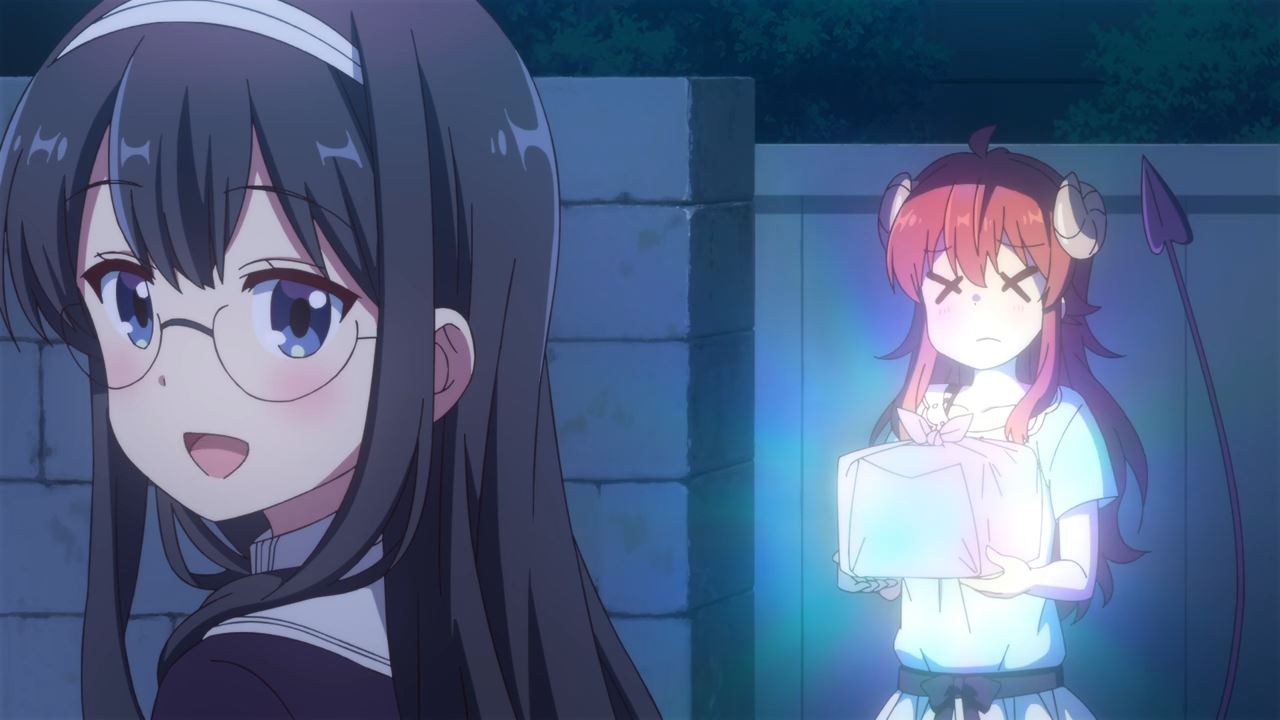 Anyways, looks like Shamiko is done her business at Café Asura as all of the required ingredients are neatly-packed inside this box. 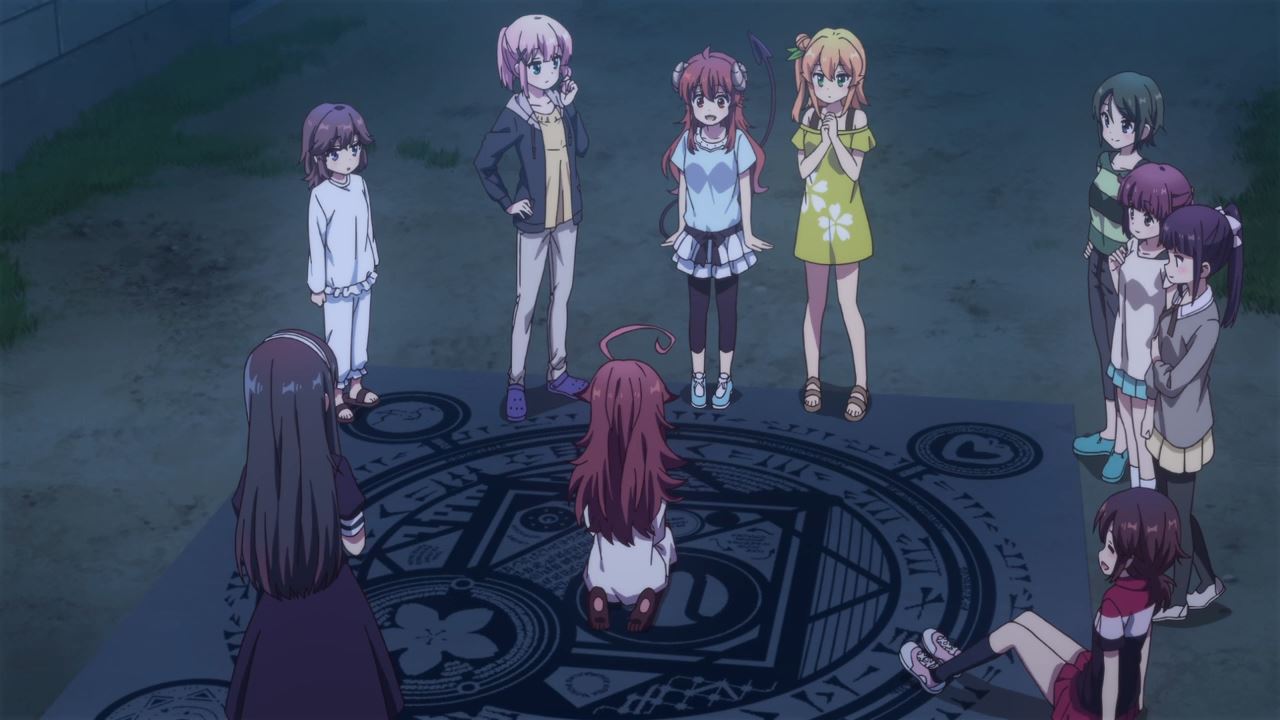 Now that all of the ingredients are gathered, time to assemble the vessel that will house Ugallu’s soul.

Please note that Sion Ogura and her friends used a lot of meat and other questionable materials to build this vessel. 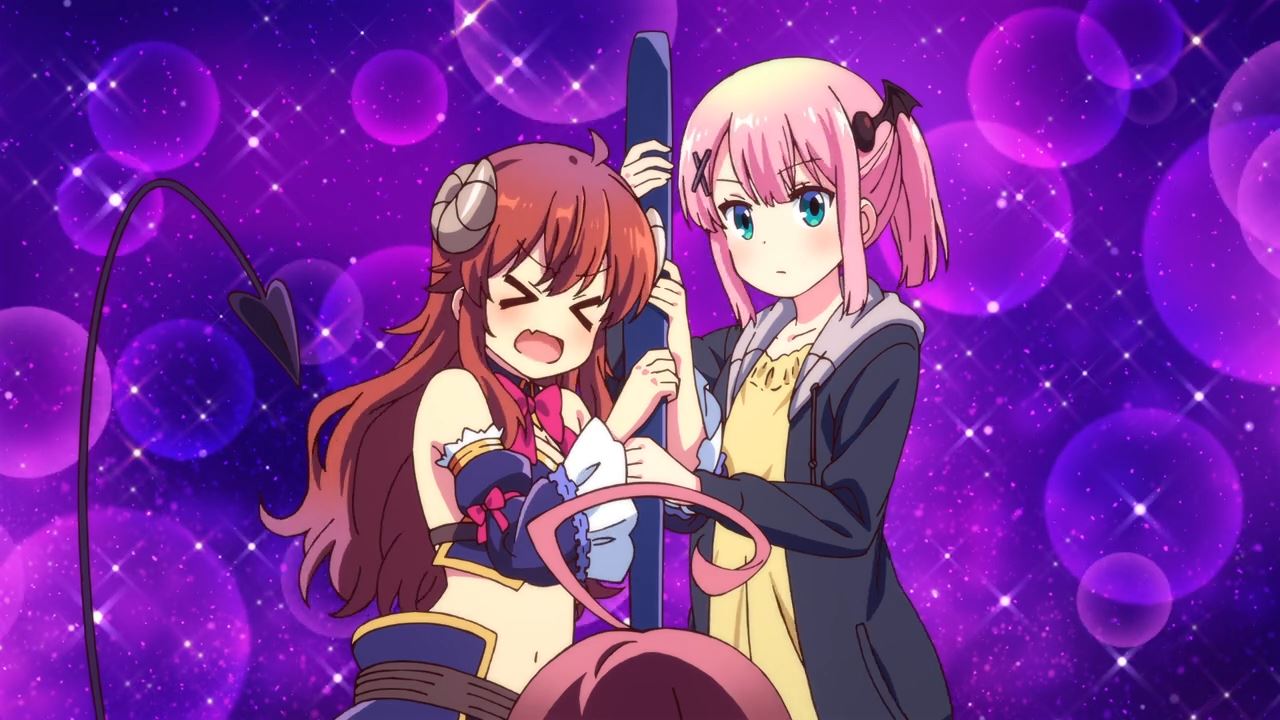 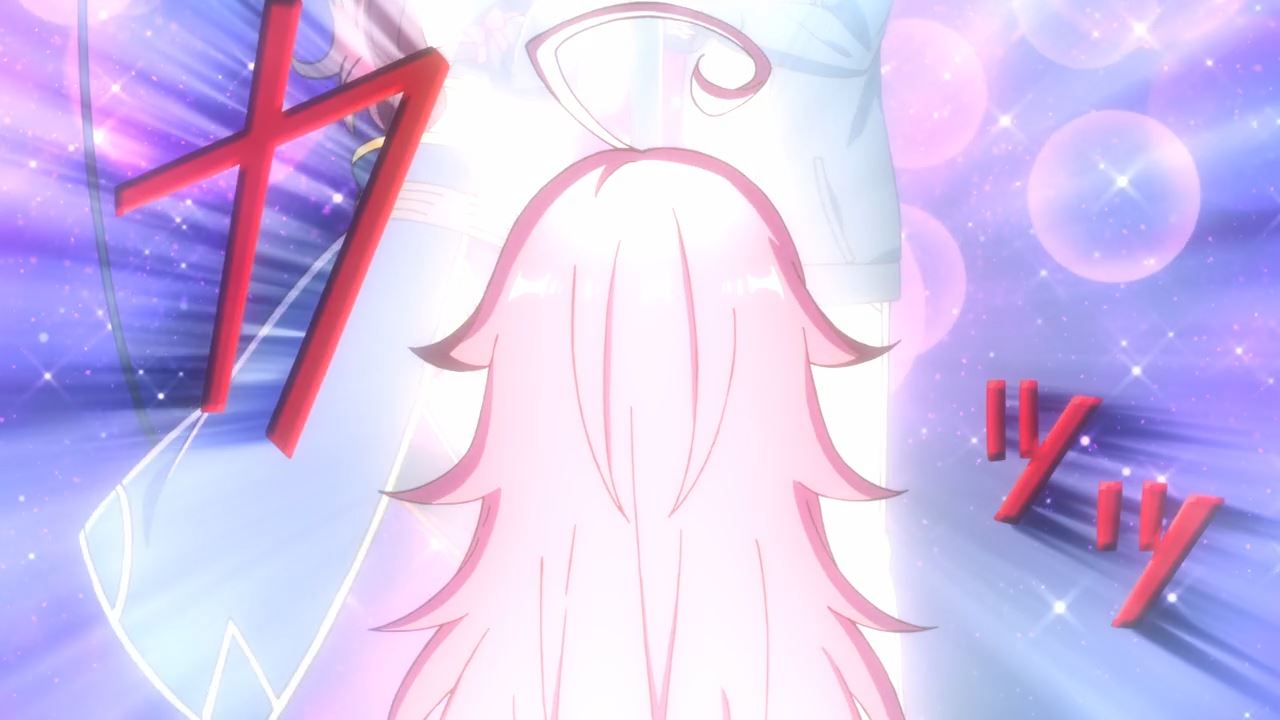 Now all that’s left is to transfer Ugallu from the dream world into the real world using Shamiko’s magical fork. I’m hoping that the transfer is successful… 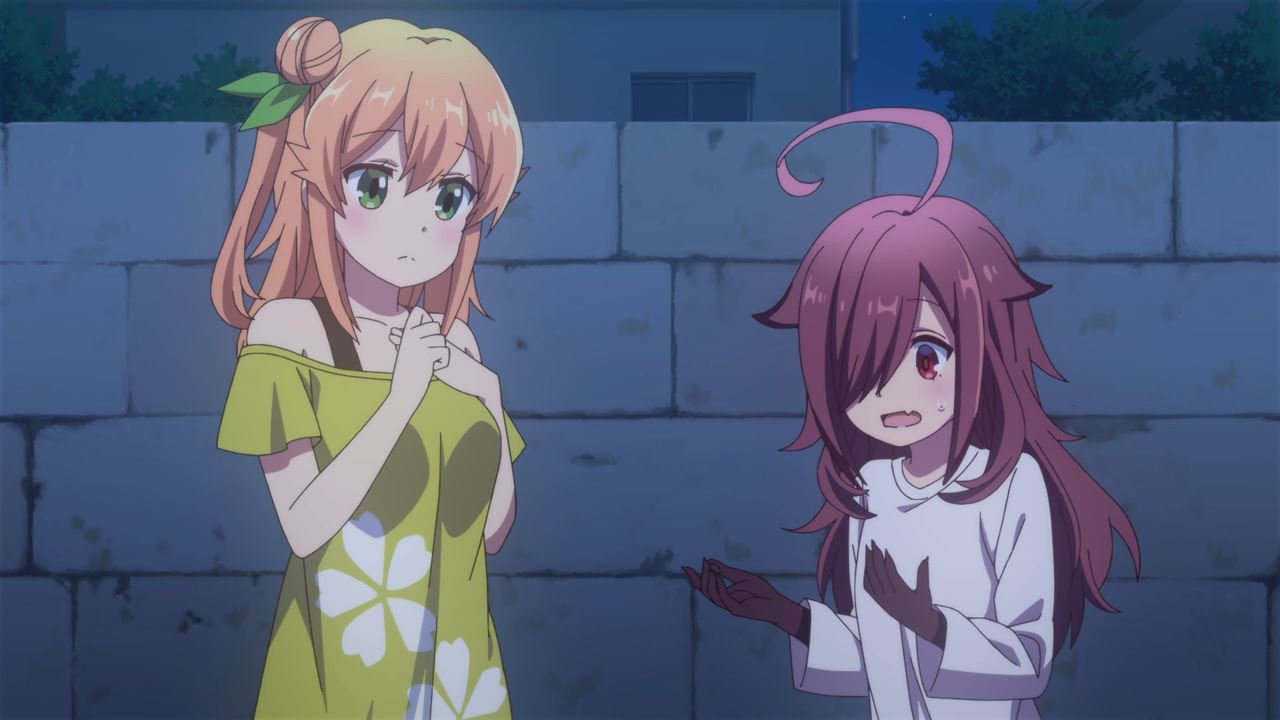 And luckily, Shamiko and Momo succeeds in transferring Ugallu from Mikan’s body into her own. Even this creature can’t believe that she got her own body.

Of course, Ugallu is still ashamed that she’s treated like a nuisance than an ally, but Mikan will fix her up down the line. 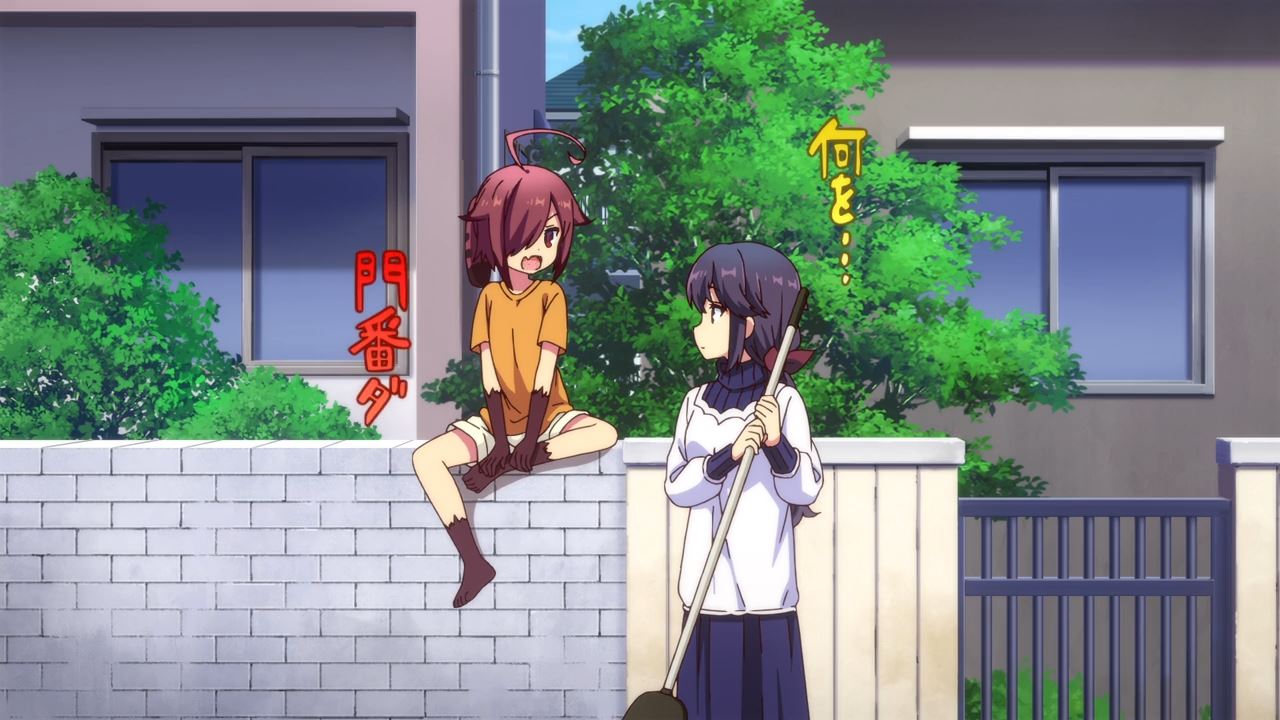 Anyways, I have to say that the 2nd season of Machikado Mazoku got a happy ending where Ugallu got accustomed to her new surroundings. Heck, she even wears some new clothes.

Now then, I’m glad that I finally saw the mythical magical girl that saved Shamiko’s life, although it sucks that Sakura Chiyoda will be stuck inside Yuko’s body for many years to come. Also, the new characters such as Lico and Shirosawa are fine, although I still won’t forgive them for making Shamiko into a slave worker thanks to Lico’s cooking.

Aside from that, everything is still the same and man, there are some great moments in Season 2 like Lilith taking over Shamiko’s body to visit a hot springs, as well as the arrival of Momo’s dark magical girl form which she saved Shamiko from various trouble. 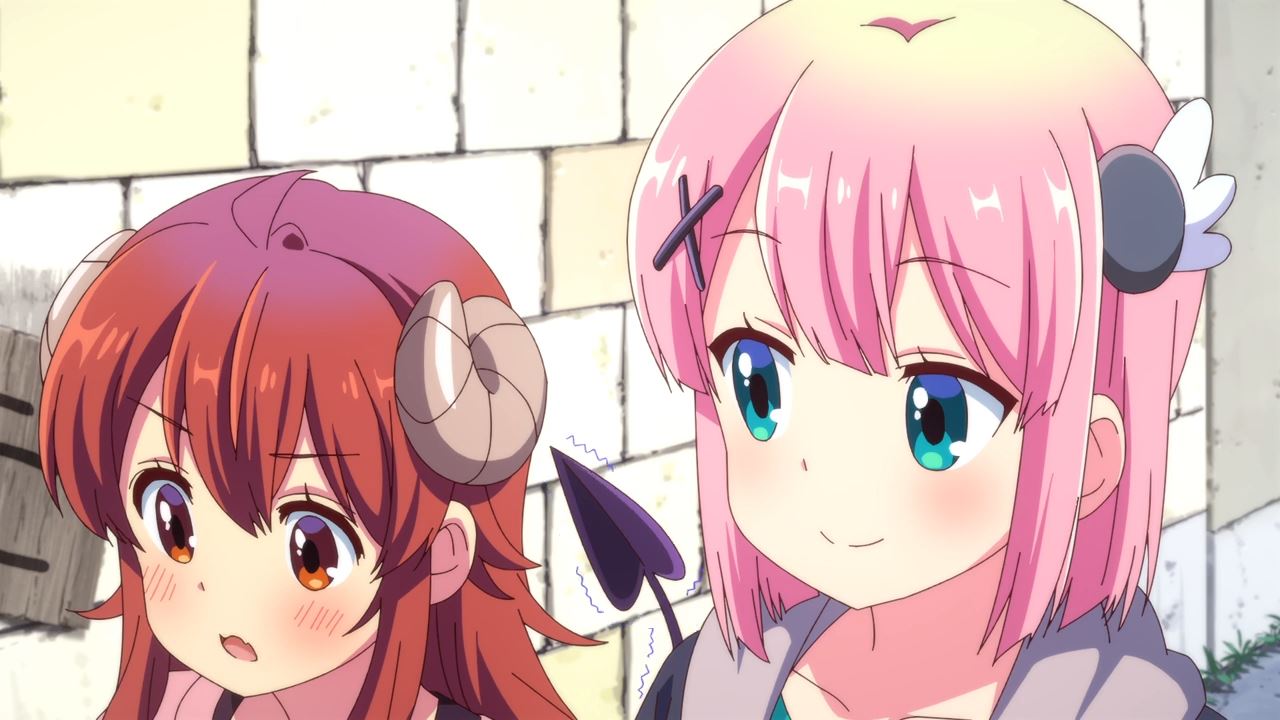 With that said, I’m hoping that there’s more to come for Machikado Mazoku as I wanna see more adventures of both Yuko Yoshida and Momo Chiyoda.

Still, it’s unfortunate that Shamiko didn’t use her famous “Don’t think this means you’ve won!” catchphrase much during the course of Season 2. Anyways, I’ll see them again in an unforeseeable future…