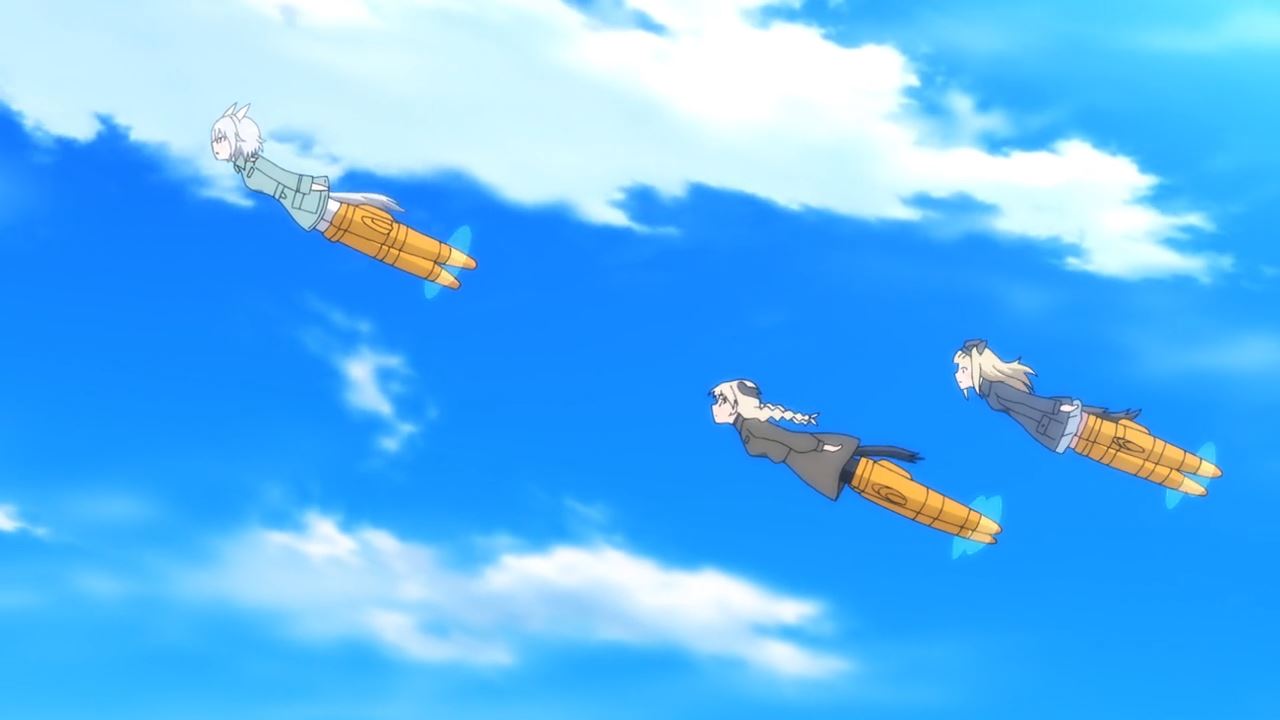 Well everyone, it’s time for these new recruits to do some extreme training, from vocal lessons to performing acrobatics while using a Striker Unit.

Now, they won’t call themselves witches if they can’t fly on their own, which is why Aila Paivikki Linnamaa will teach Lyudmila “Milasha” Andreyevna Ruslanova and Maria Magadalene Dietrich in performing evasive maneuvers when fighting against the Neuroi. 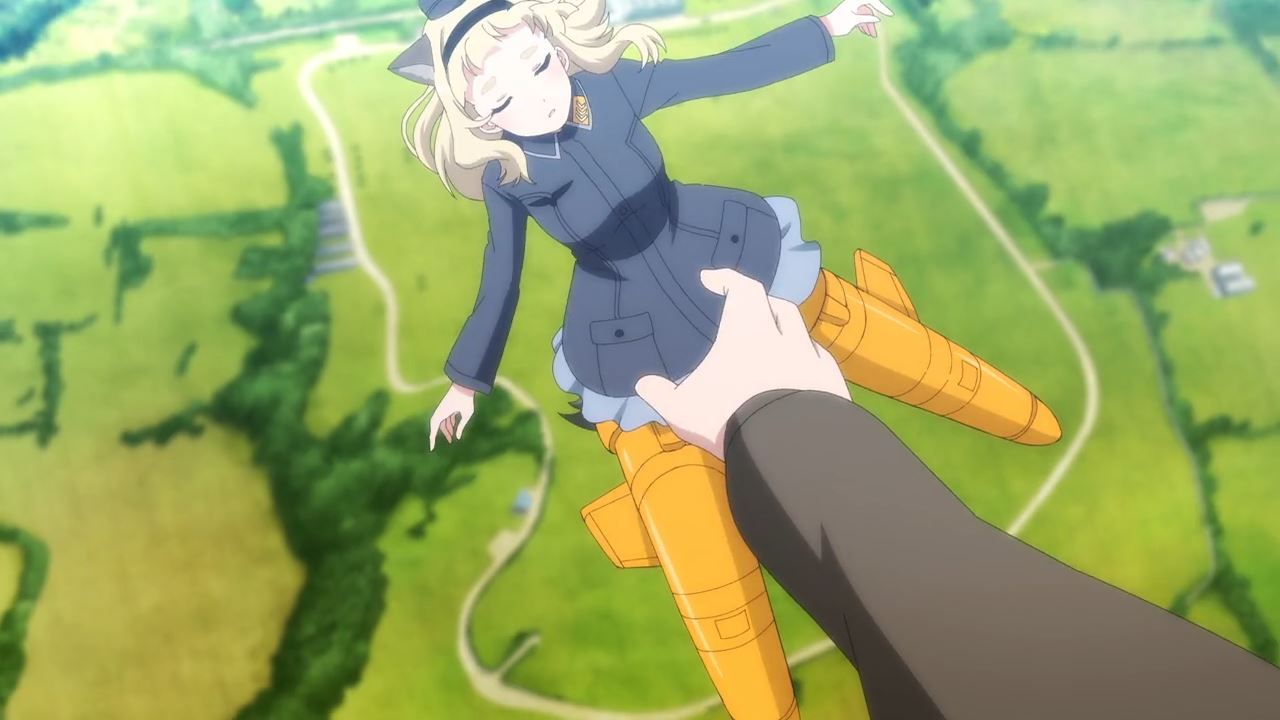 Sadly, Maria is having trouble keeping herself awake as she passed out, meaning that she might crash to the ground and die. Milasha tries to rescue her but she can’t reach Maria’s hand. 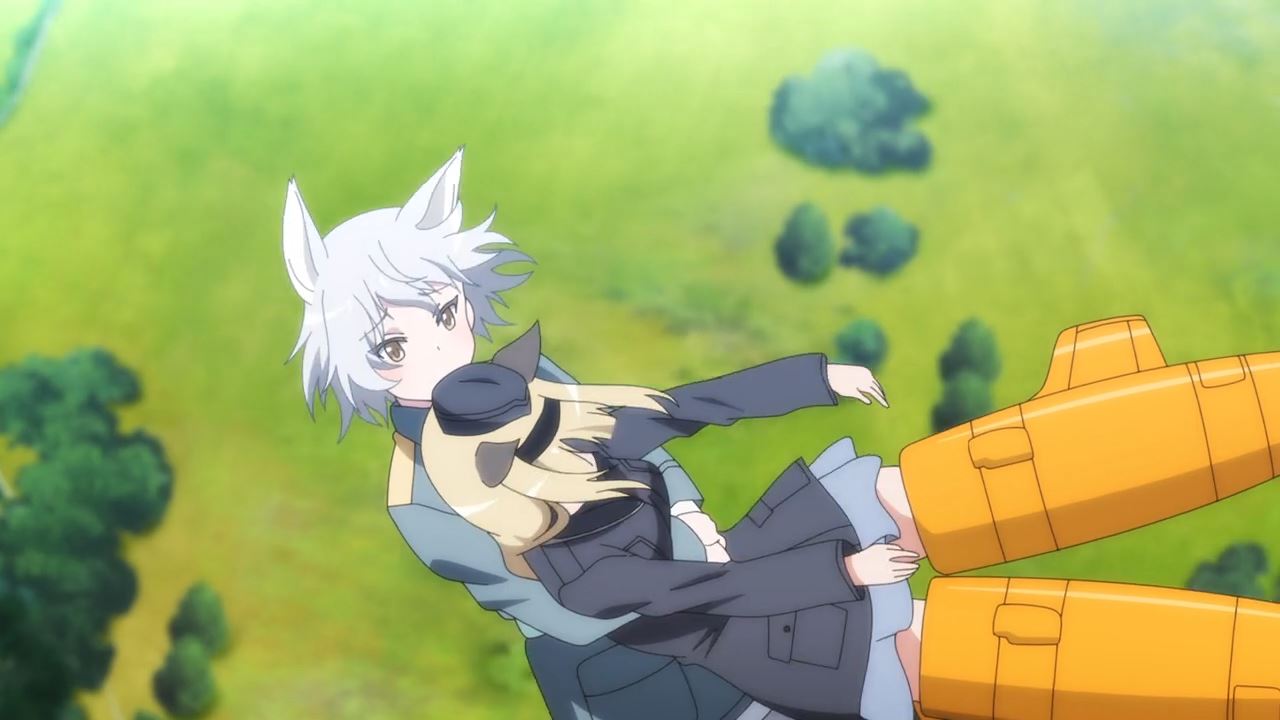 Fortunately, Aila has arrived to rescue Maria from a freaky accident. Of course, the flight training will be postponed for the time being due to Maria Magadalene Dietrich feeling under the weather today. 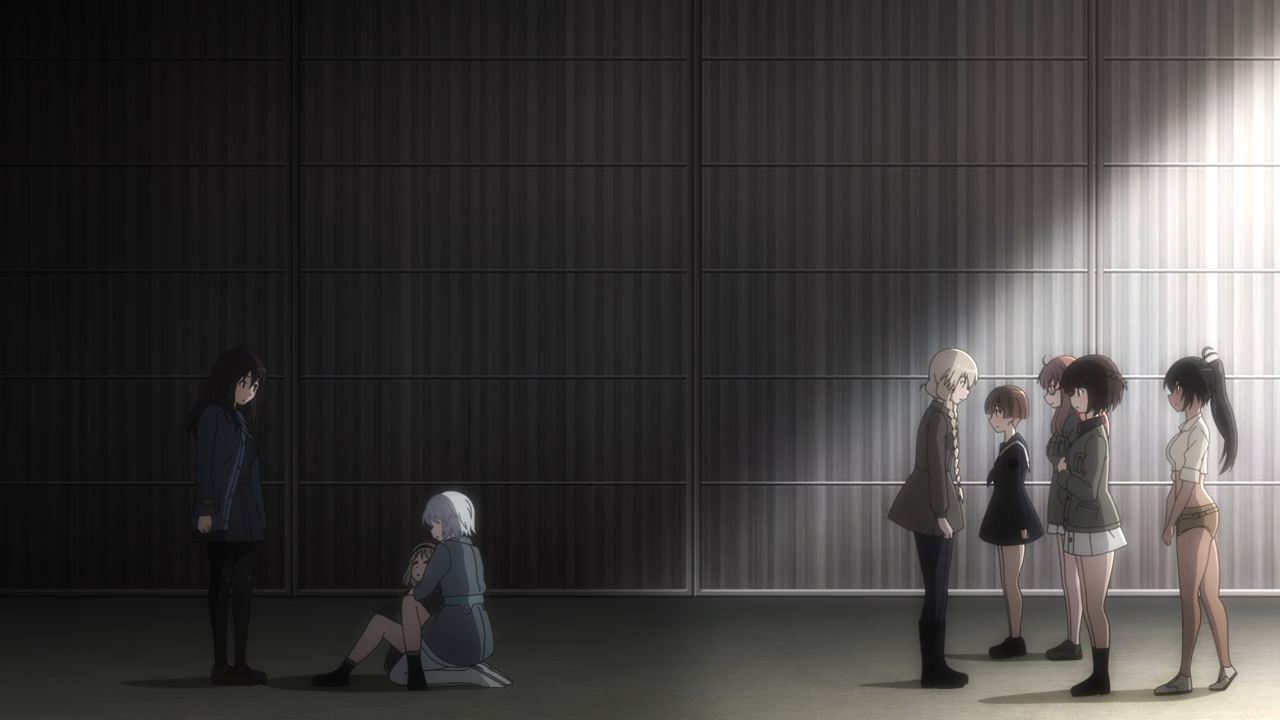 Meanwhile, looks like Aila Paivikki Linnamaa felt that she’s a terrible leader where she pushed one witch to the edge. Of course, there’s a reason why Aila became a nasty sergeant for her teammates. 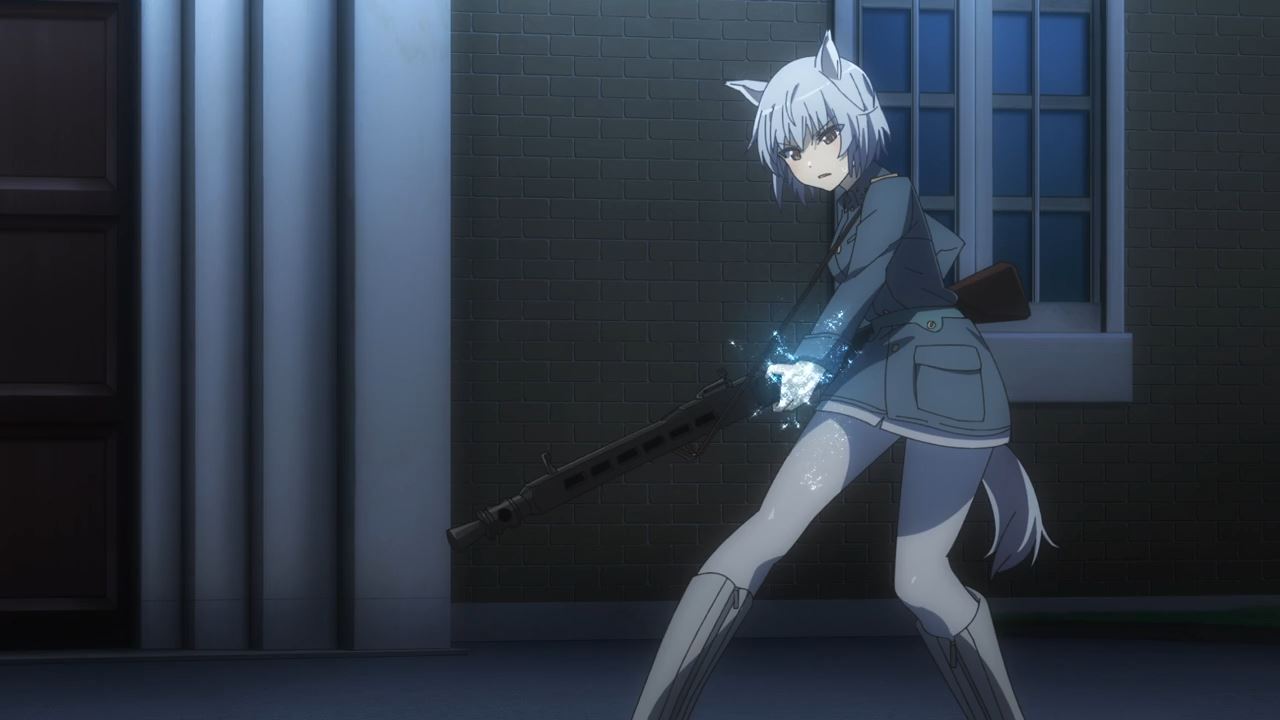 Turns out that she got severely-injured to the point that Aila couldn’t carry a general-purpose machine gun with her two hands. It’s no wonder why she wants to train her fellow witches so they won’t suffer the same fate. 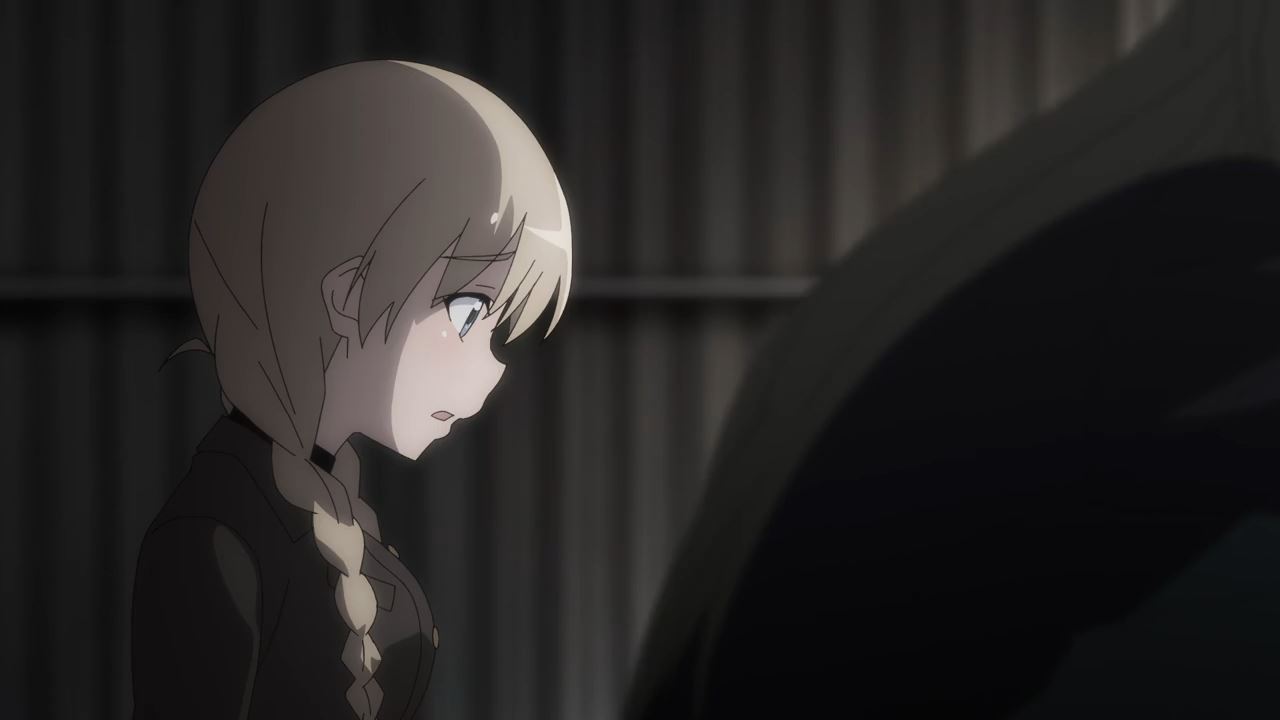 And yet, it appears that it’s falling apart now that Aila is about to back out. At this point, this joint fighter wing will be dismantled soon. 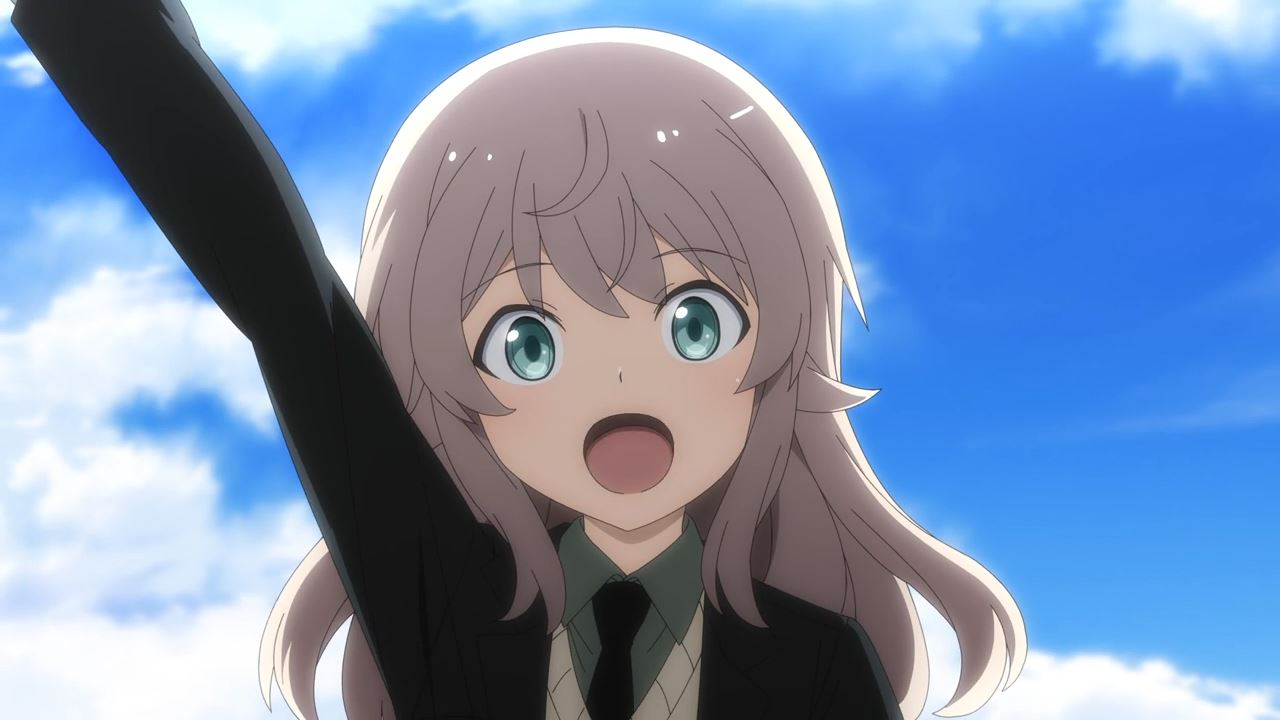 That’s until Virginia Robertson appeared where the country girl has finally finished her witch training.

Not sure if she’s gonna take up arms and fight the Neuroi soon, but Ginny said that she’ll be joining Commander Grace Maitland “Gracie” Steward’s new squadron. 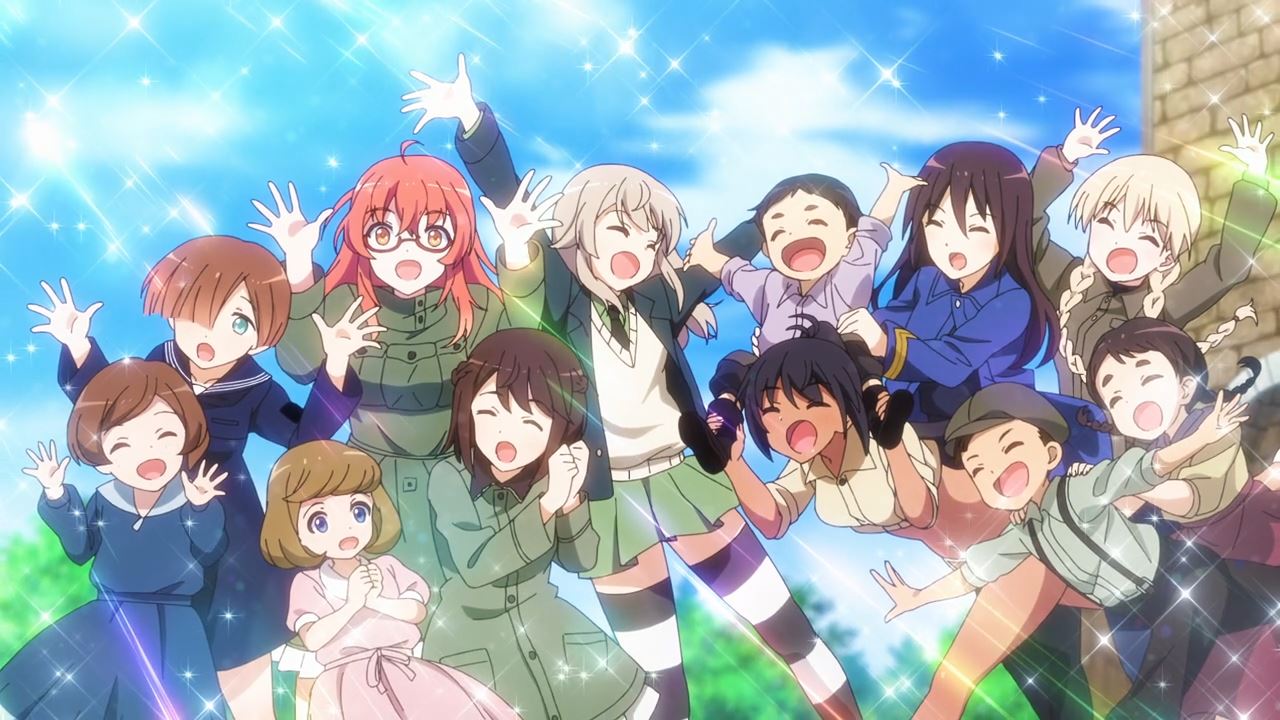 Eventually, morale has gone back up now that Ginny has arrived. Still, they need to get serious on their training to become a flying marching band. 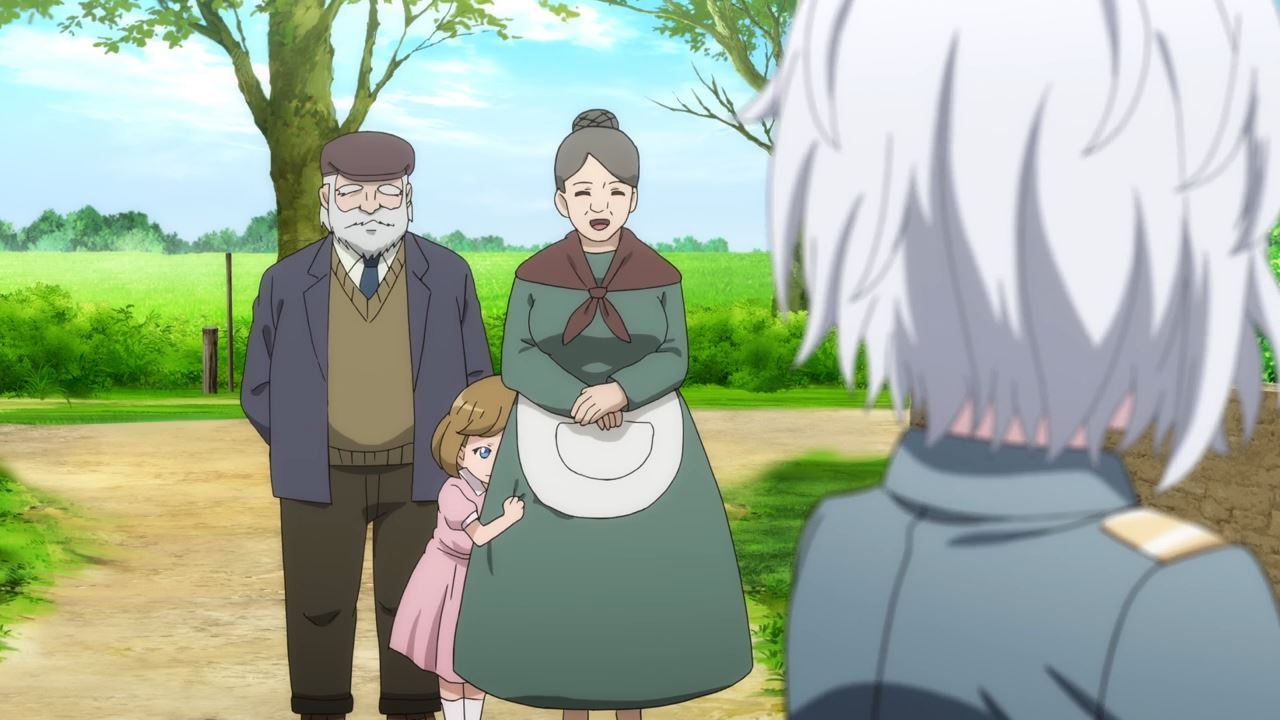 Now then, they went to the countryside where Aila Paivikki Linnamaa and the rest are here to entertain the townsfolks, as peace is finally returning now that the Neuroi threat has already been dealt with. 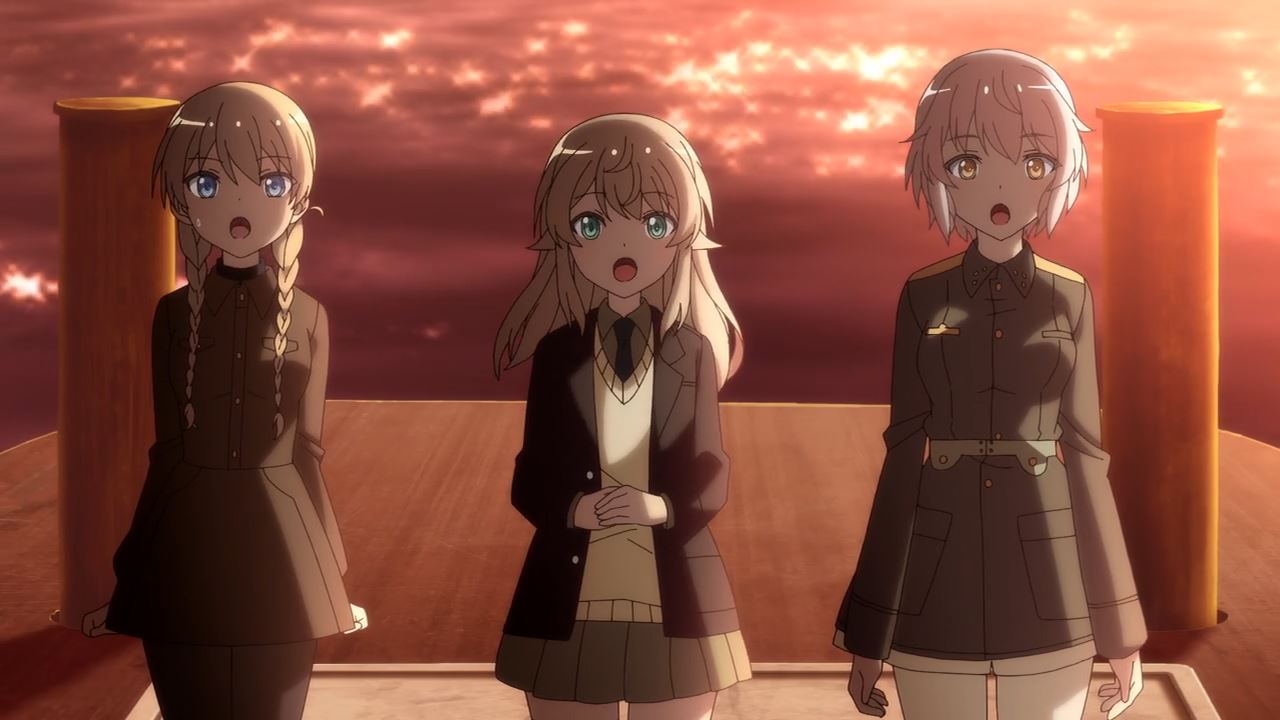 And speaking of Aila, she’s entertaining the villagers with her powerful singing voice. C’mon, Milasha adored her very much ever since Aila became an opera singer.

Speaking of Lyudmila Andreyevna Ruslanova, she and Virginia Robertson accompanied Aila as both of them have nice vocals. Looks like they managed to entertain the townsfolks. 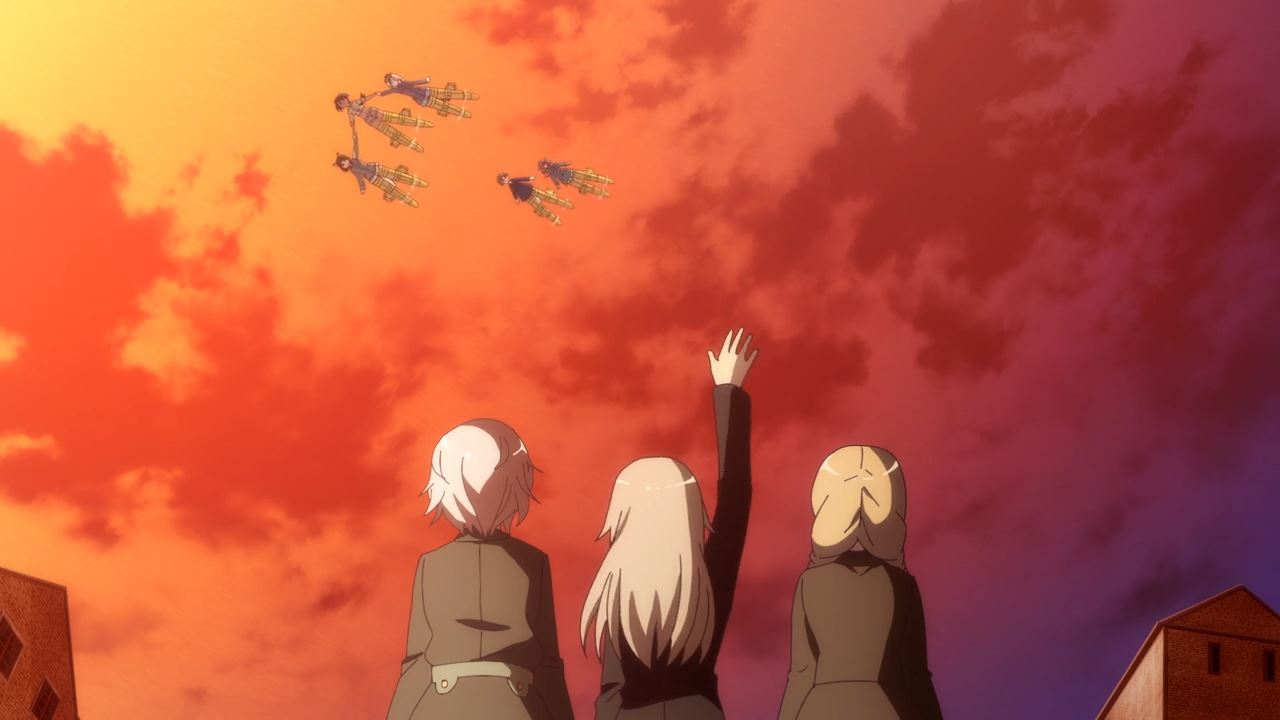 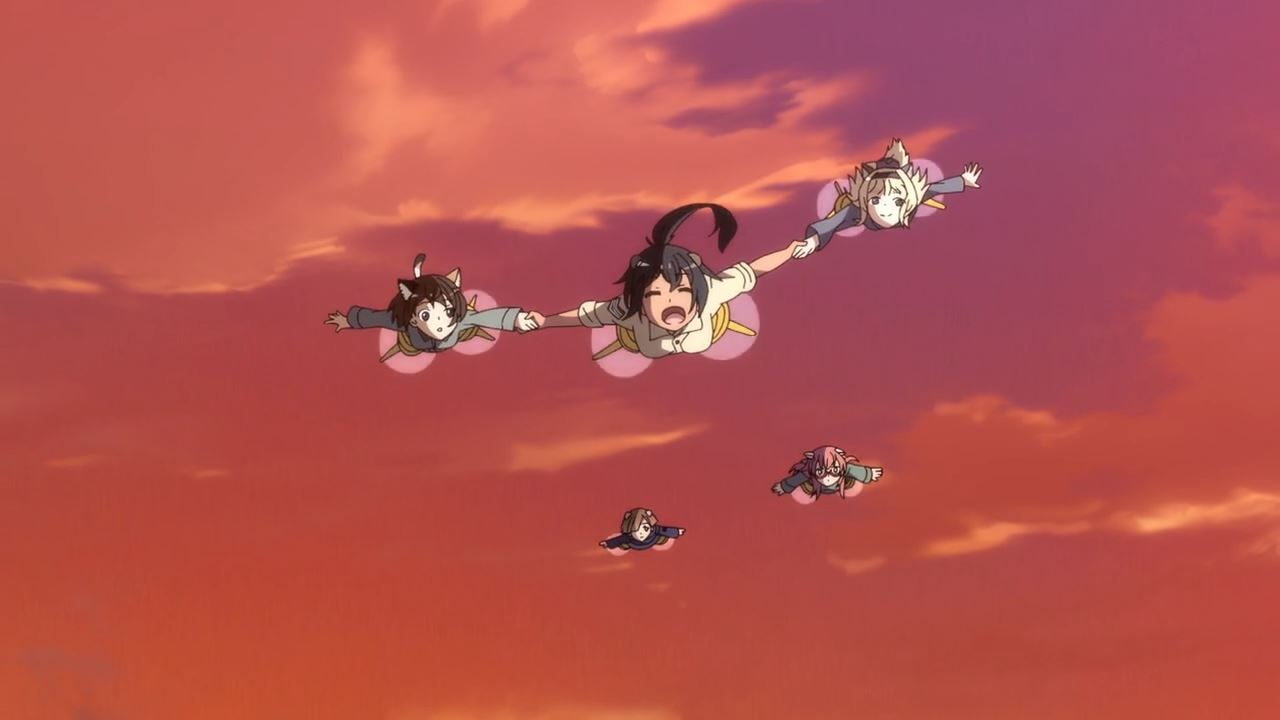 Oh yeah, looks like Manaia Matawhaura “Mana” Hato and the rest of the witches have arrived to give Aila Paivikki Linnamaa and her two backup singers a flying ovation. 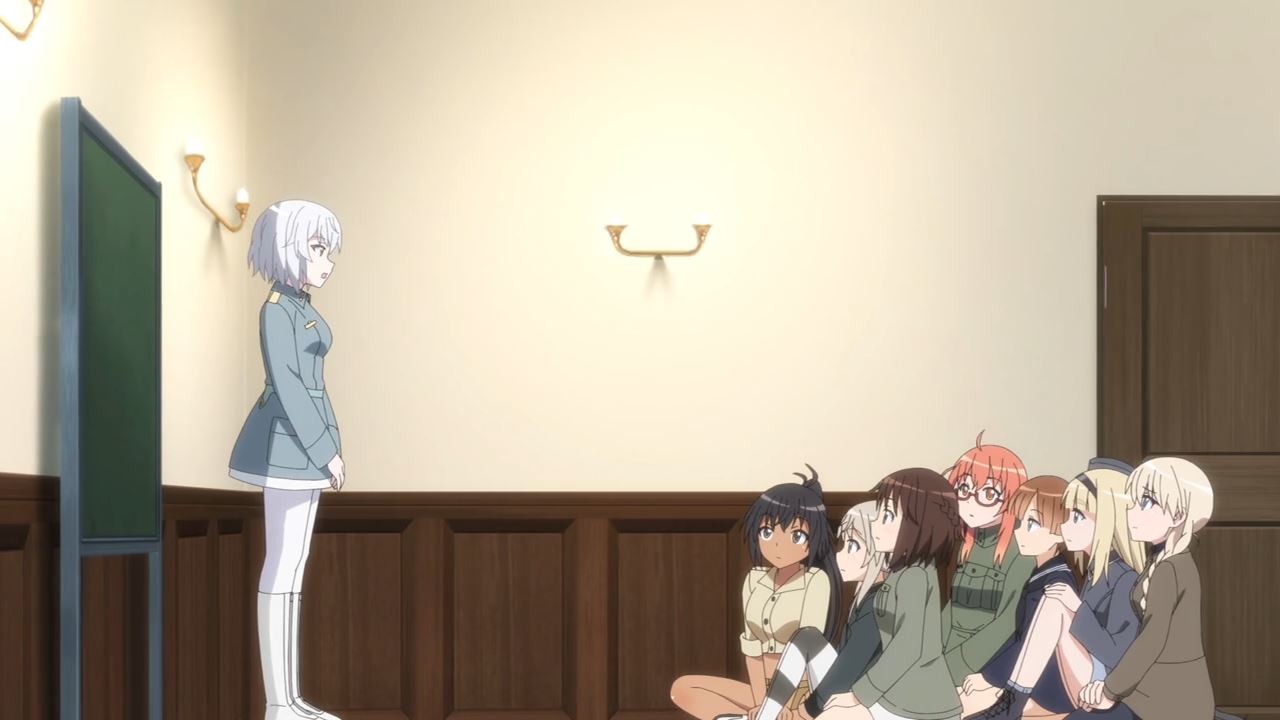 But let’s return to the team leader where she apologize to her teammates for being brash and nasty.

Sure that her traumatic past made her cranky, but Aila should focus on the present now that she has teammates who can be useful in other ways. Looks like this new squadron/musical band will be kept after all, although I think they need a new moniker. 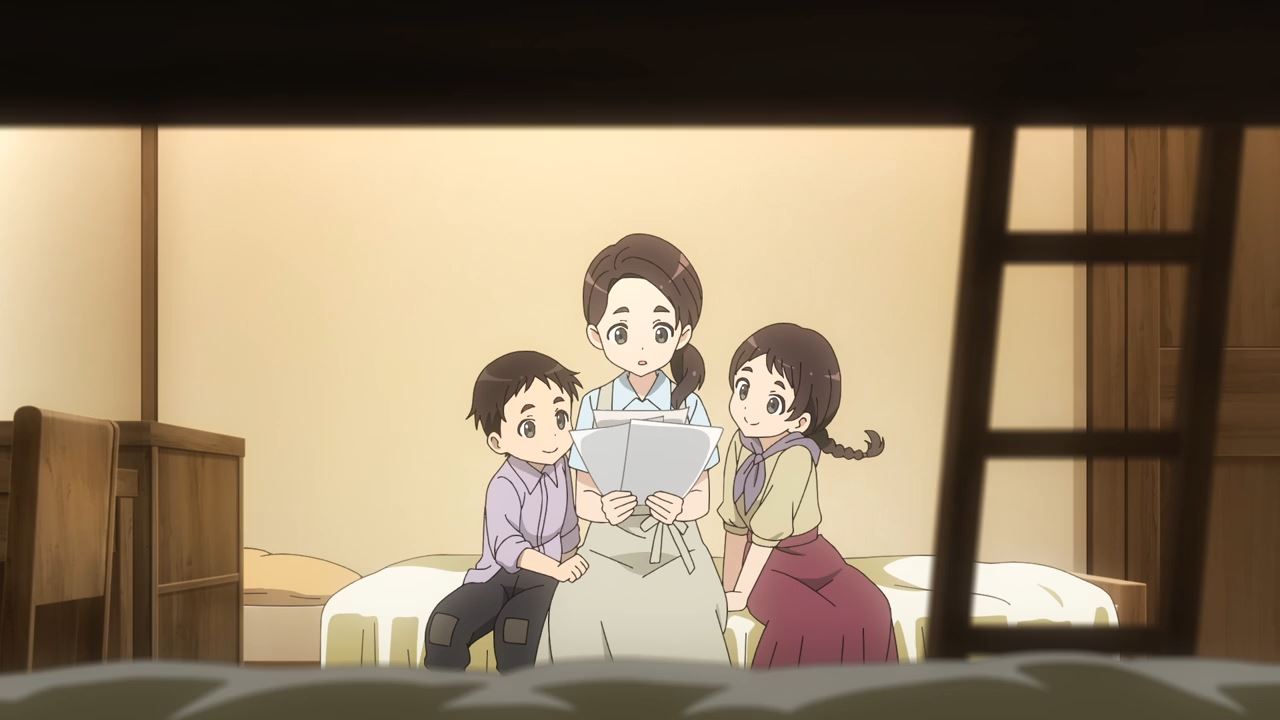 Fortunately, the villagers came up with an interesting name to the new joint fighter wing/musical band. 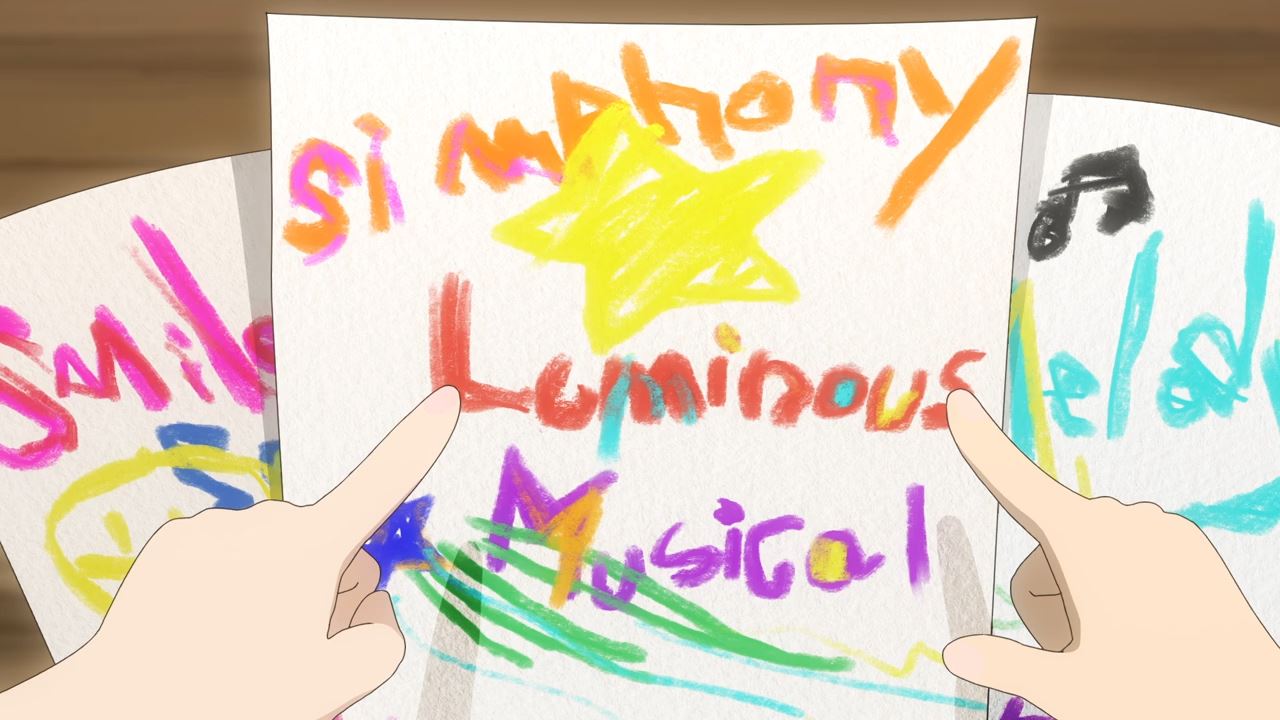 Anyways, the new squadron will be called as “Luminous Witches”. Not sure how dazzling these girls will become, but let’s hope that Ginny and the rest will become vital in the battle against the Neuroi.

With that said, I’ll see you next time where the girls continue their training. As for Maria Magadalene Dietrich? I think she should start flying with a broomstick to get used to the high altitude.