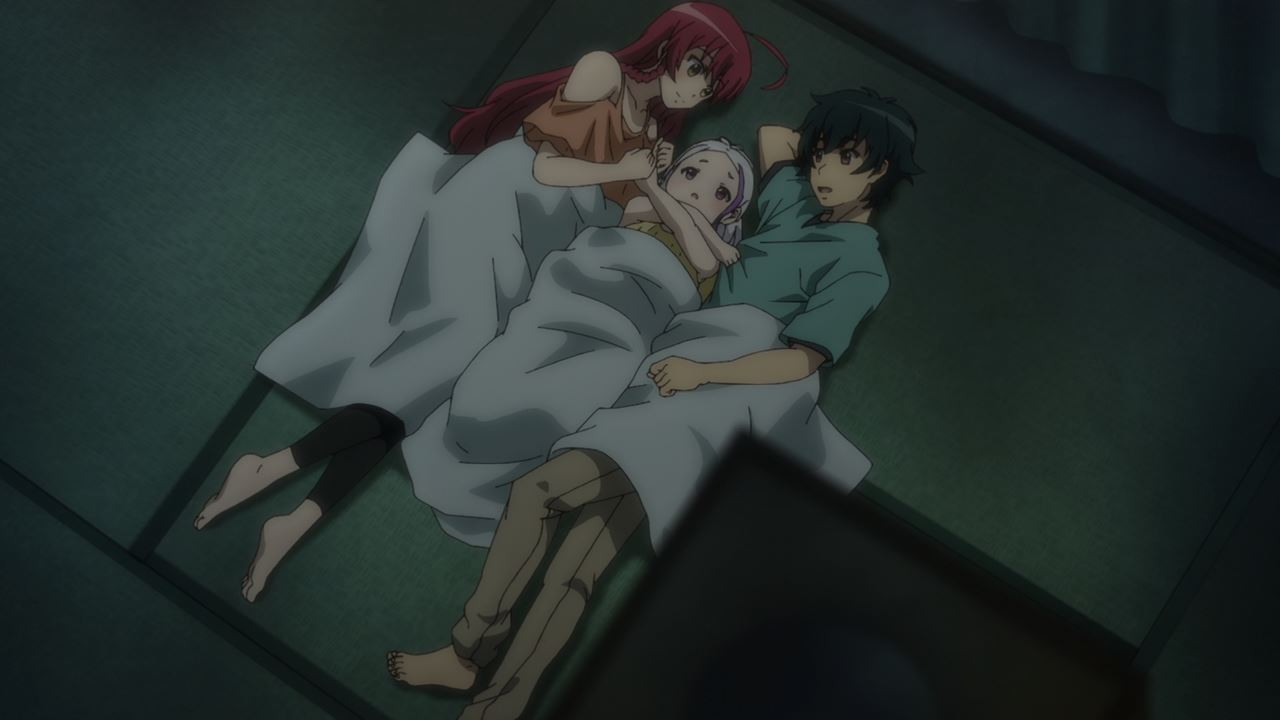 Well everyone, it appears that Emi Yusa will have to stay with Sadao Maou as they’re gonna protect Alas Ramus from Gabriel and his group of angels.

Speaking of Maou-san, he’s about to tell a bedtime story of how a traveler became a king. 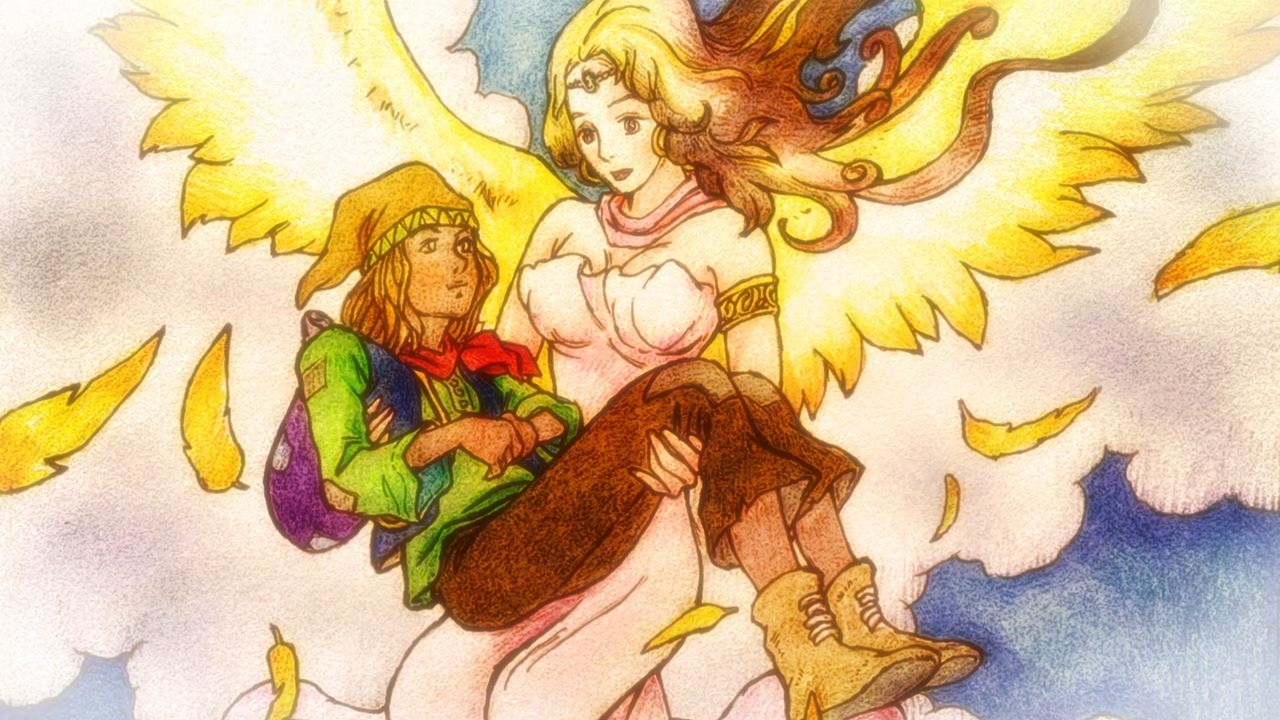 Of course, his bedtime story is somewhat similar to his predicament, especially when the traveler is saved by an angel.

By the way, the shards of Yesod is related to the legendary Tree of Life from Ente Isla, although I’m curious on why Gabriel and possibly various beings from Ente Isla wanted to get their hands on those shards, especially when Alas Ramus has one of it. 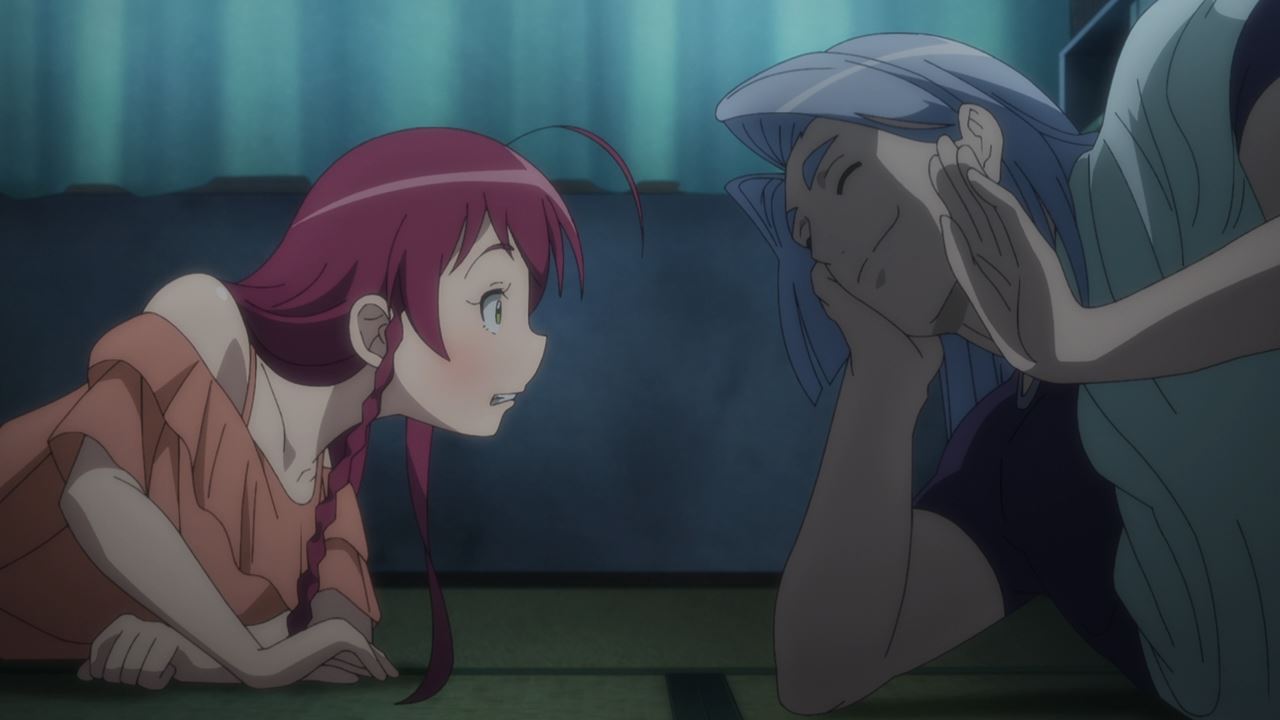 Speaking of Gabriel, he’s finally arrived at around 5:00 AM. Okay, this archangel is rude for barging into Satan’s apartment in the early hours.

Still. Gabriel won’t back down in his demands as he wants both Emilia’s sword and Alas Ramus, the former is revealed that it’s made from one of Yesod’s shards. 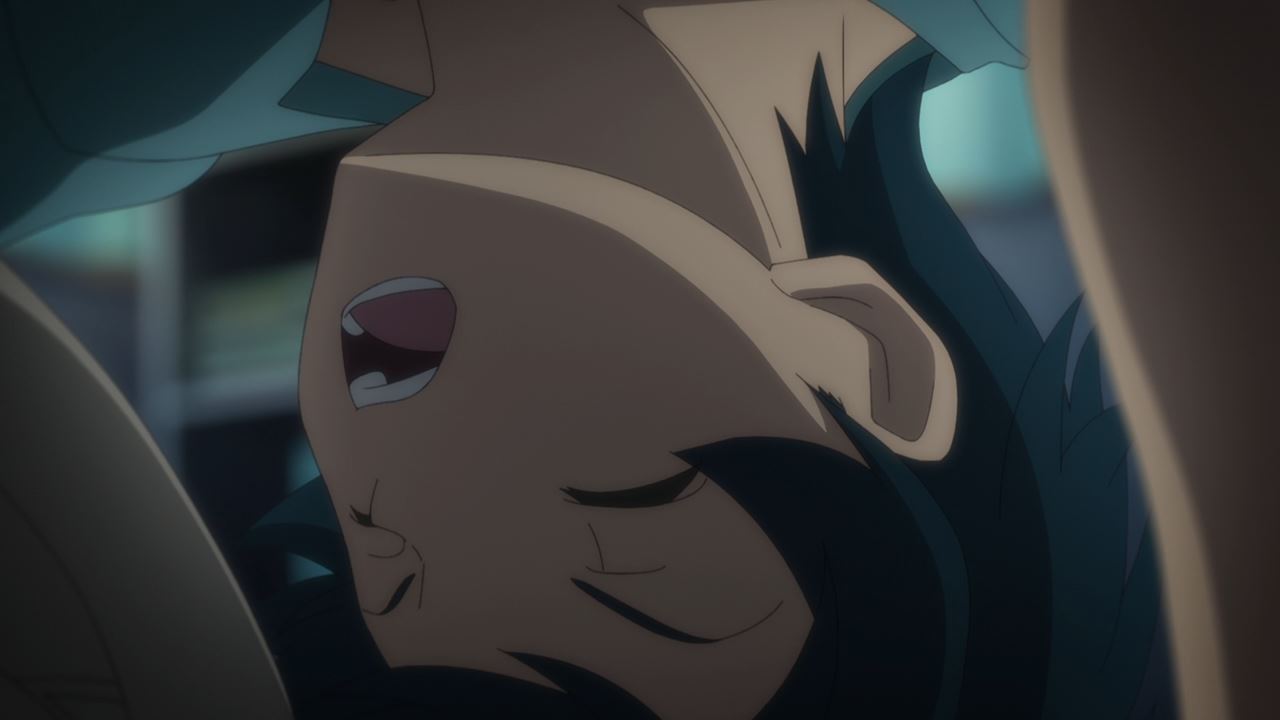 Of course, Sadao Maou or Satan doesn’t want Gabriel to take Alas Ramus away from him. So, he proposes the archangel to take his head instead. Wait Maou-sama, what about your ambition to become the CEO of MgRonald? 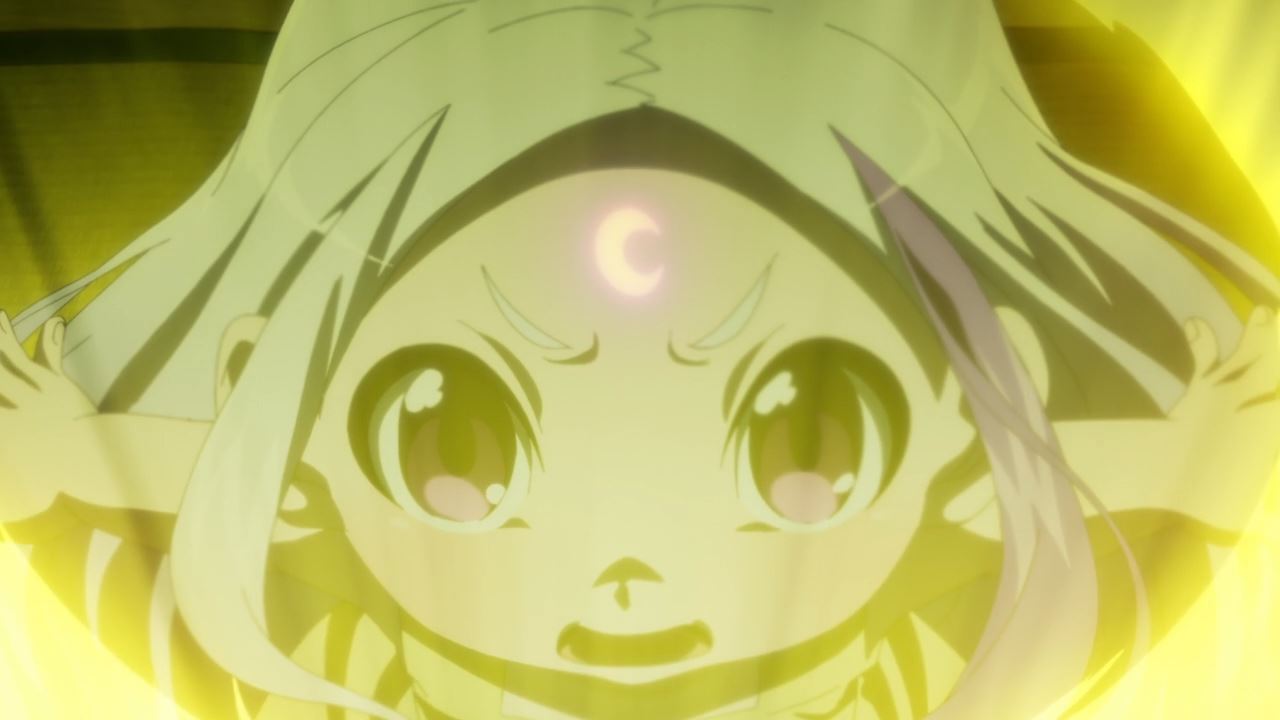 But speaking of Alas Ramus, seems that she’s really angry towards Gabriel for ruining her family that the baby goes Super Saiyan. God, it’s becoming a shonen anime now! 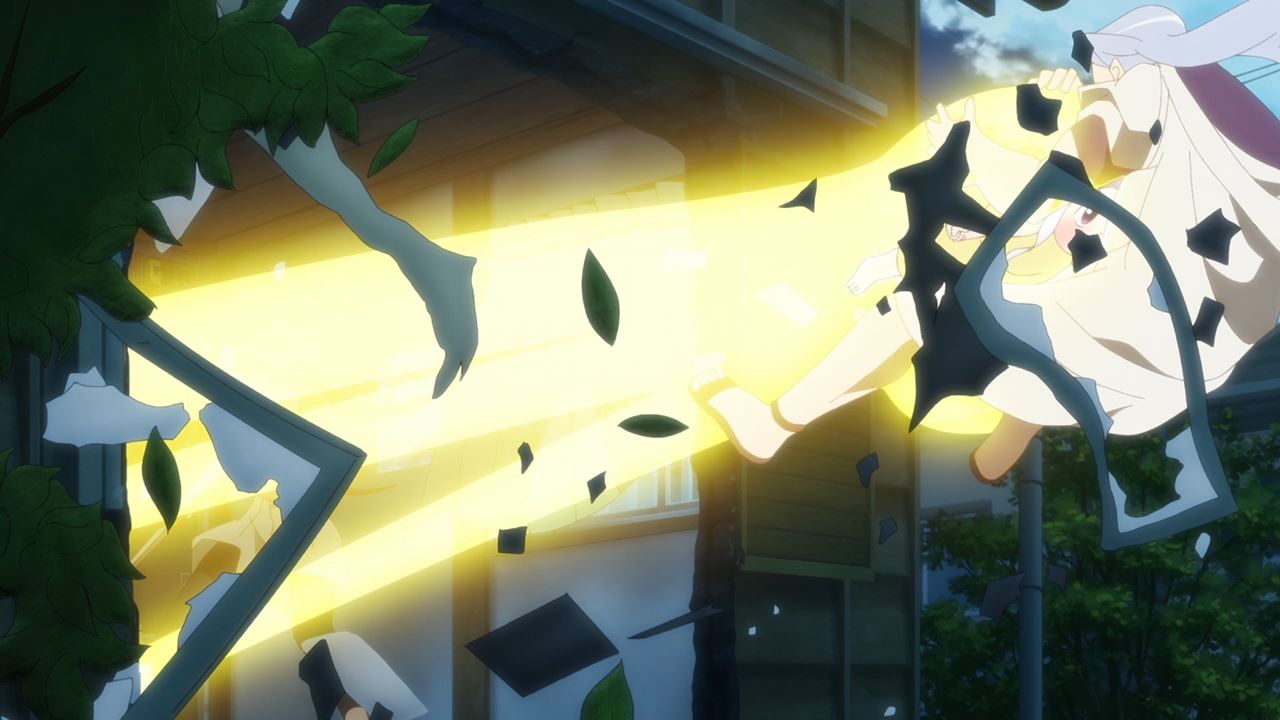 Anyways, looks like Gabriel is messing the wrong kid as he got pushed away from the shoddy apartment. Man, I’m worried about the repair costs. 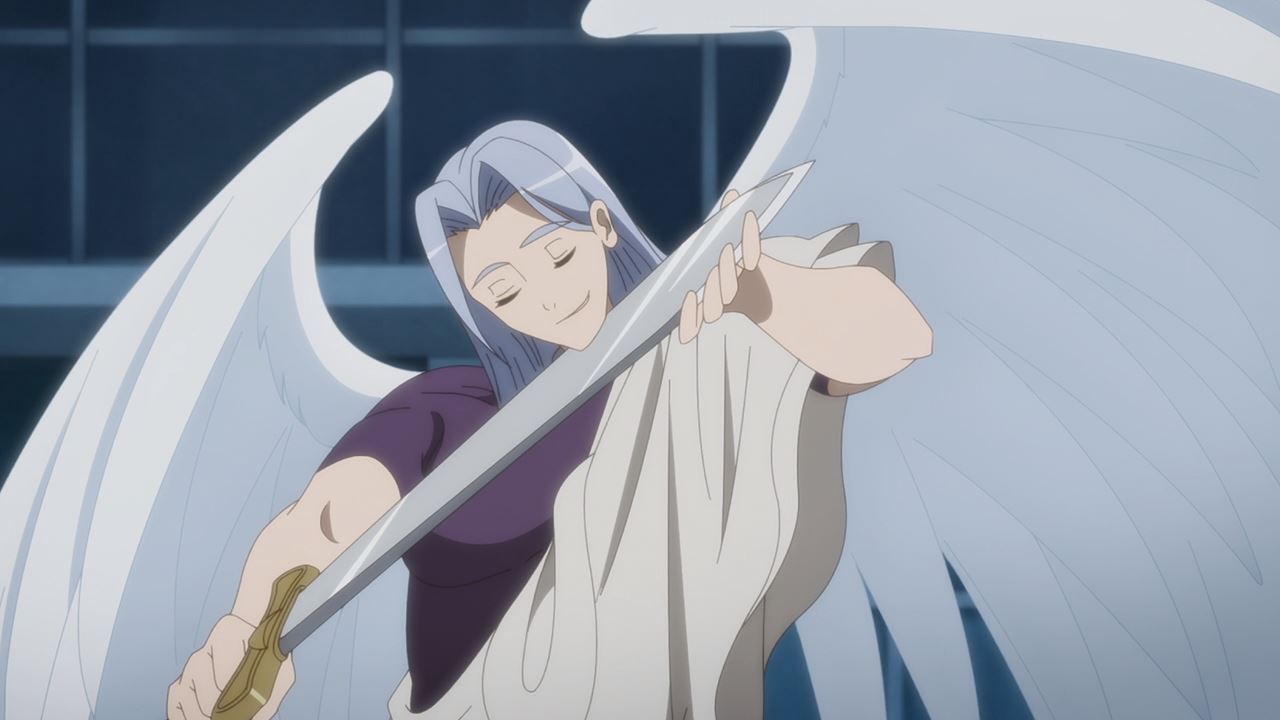 Speaking of Gabriel, he won’t hesitate in bringing some pain to a baby as he brought Durandal, his personal sacred sword. 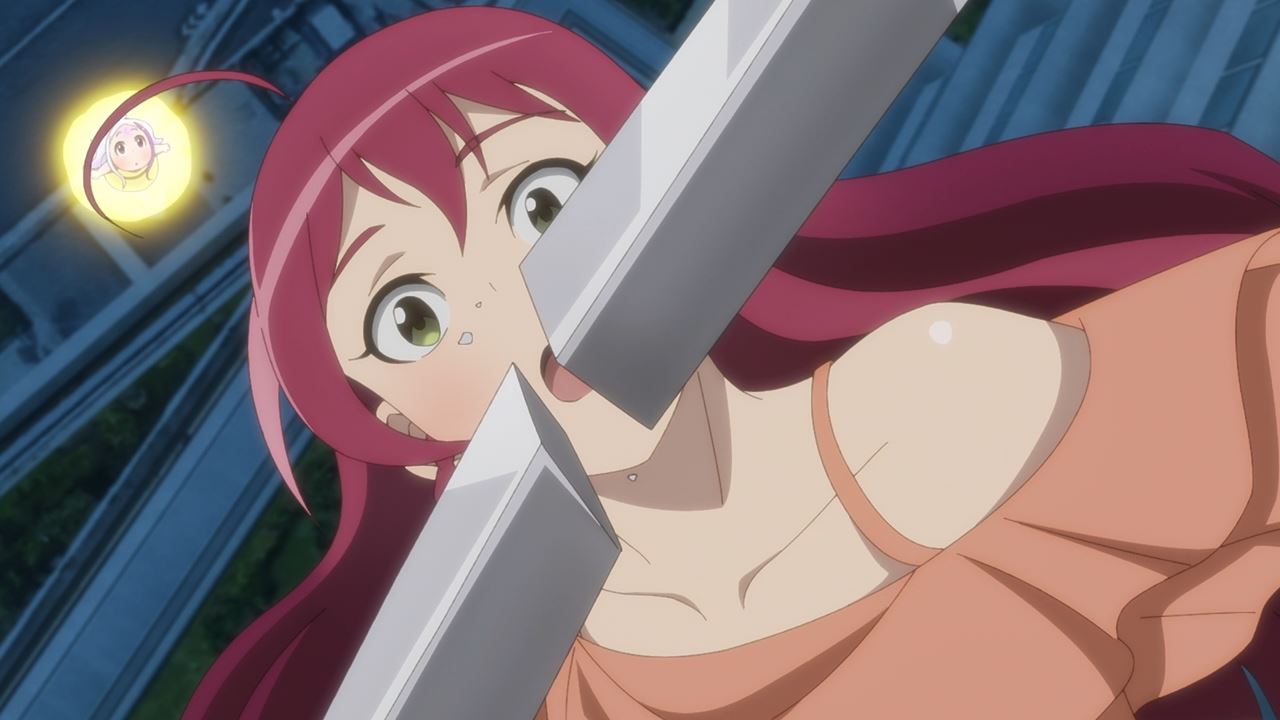 And as you can see, Emilia’s sword is pretty much ineffective against Durandal as it’s shattered into pieces. Man, this is gonna suck for the hero! 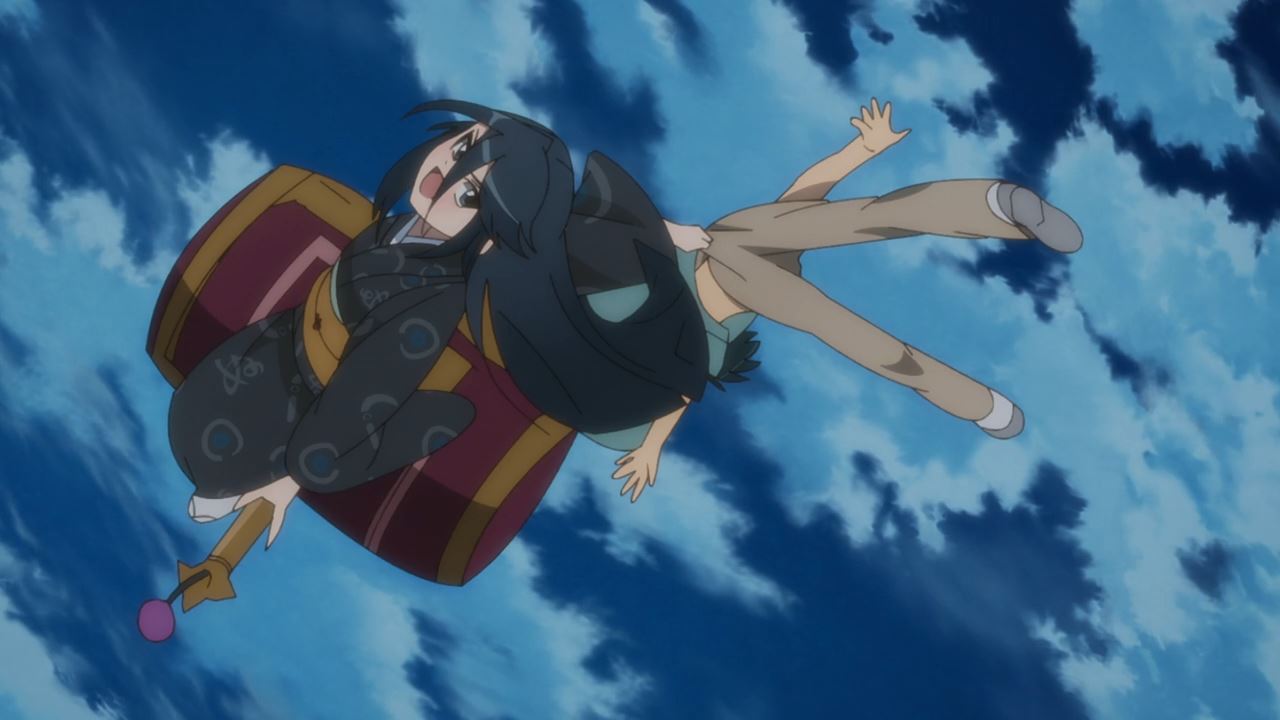 Meanwhile, here’s Crestia Bell where she drag Satan to the sky and throws the demon lord/burger joint employee towards Gabriel. 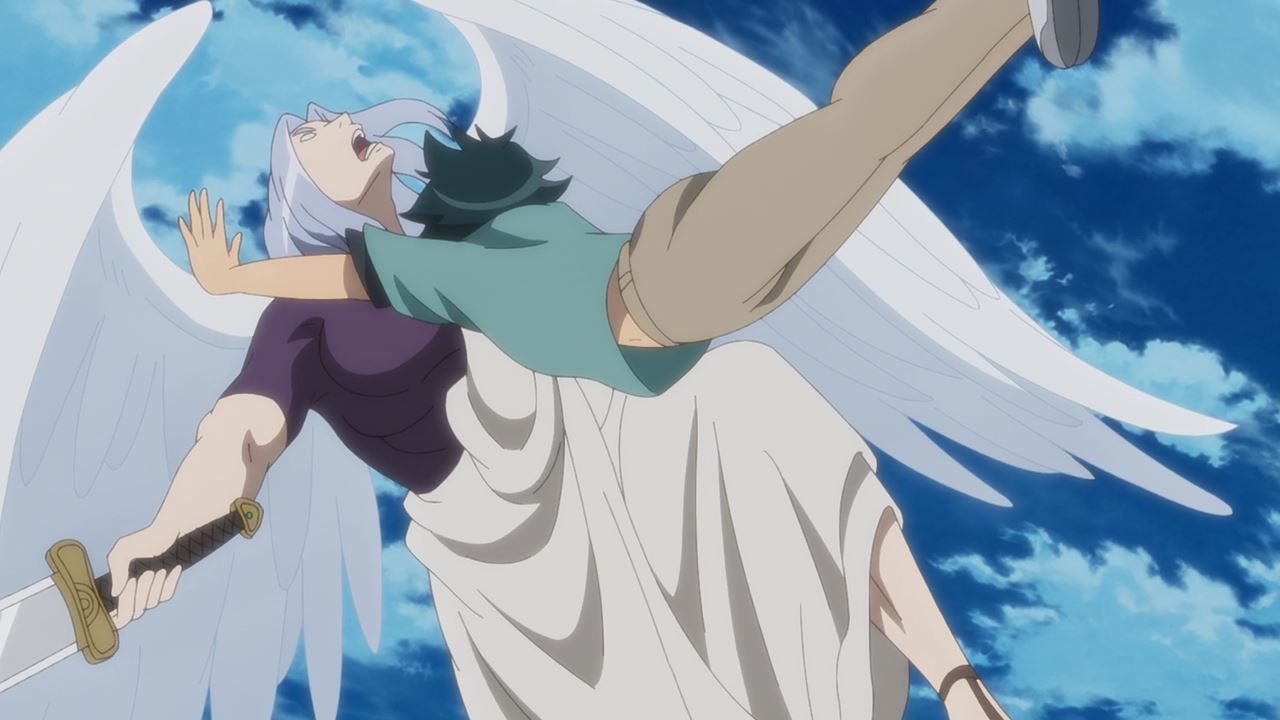 And as you can see, it’s super-effective. Then again, Sadao Maou will fall down as he doesn’t have wings to fly. Oh, and he can’t wreck his clothes because it’s expensive to buy a set. 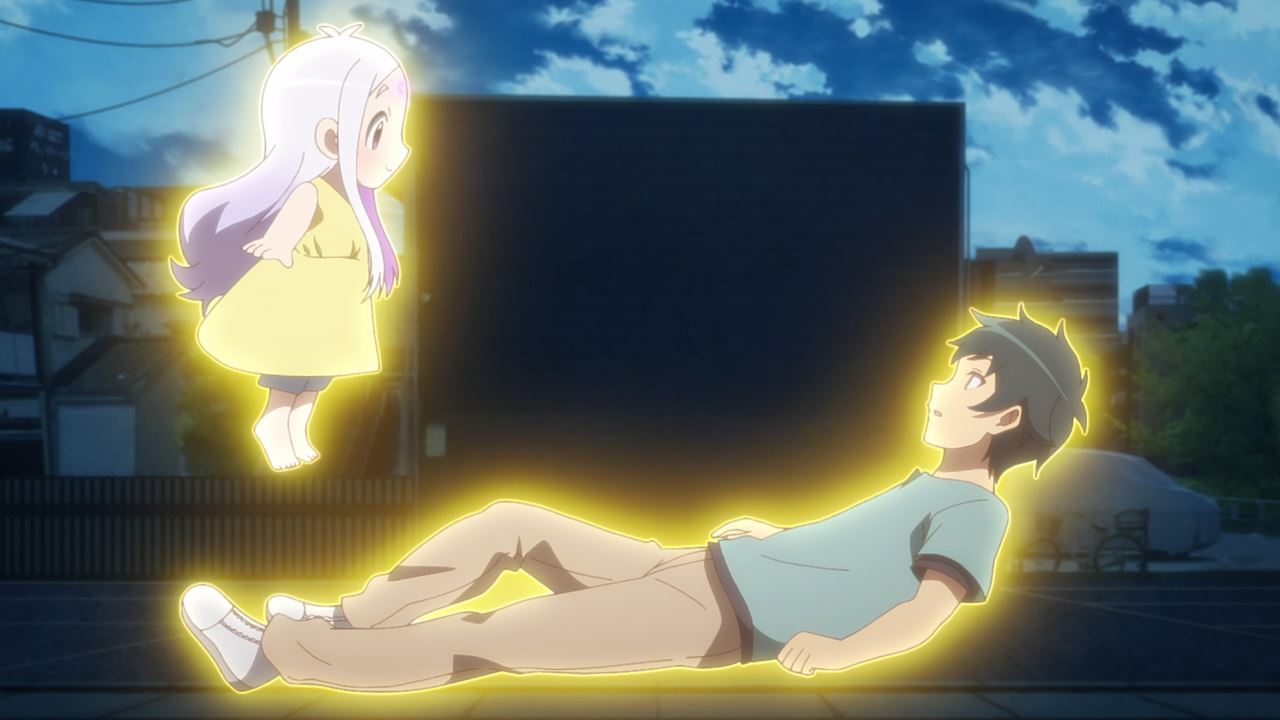 Fortunately, there’s Alas Ramus where she saved her adoptive father from falling to his death as she’ll do anything to protect her new family. 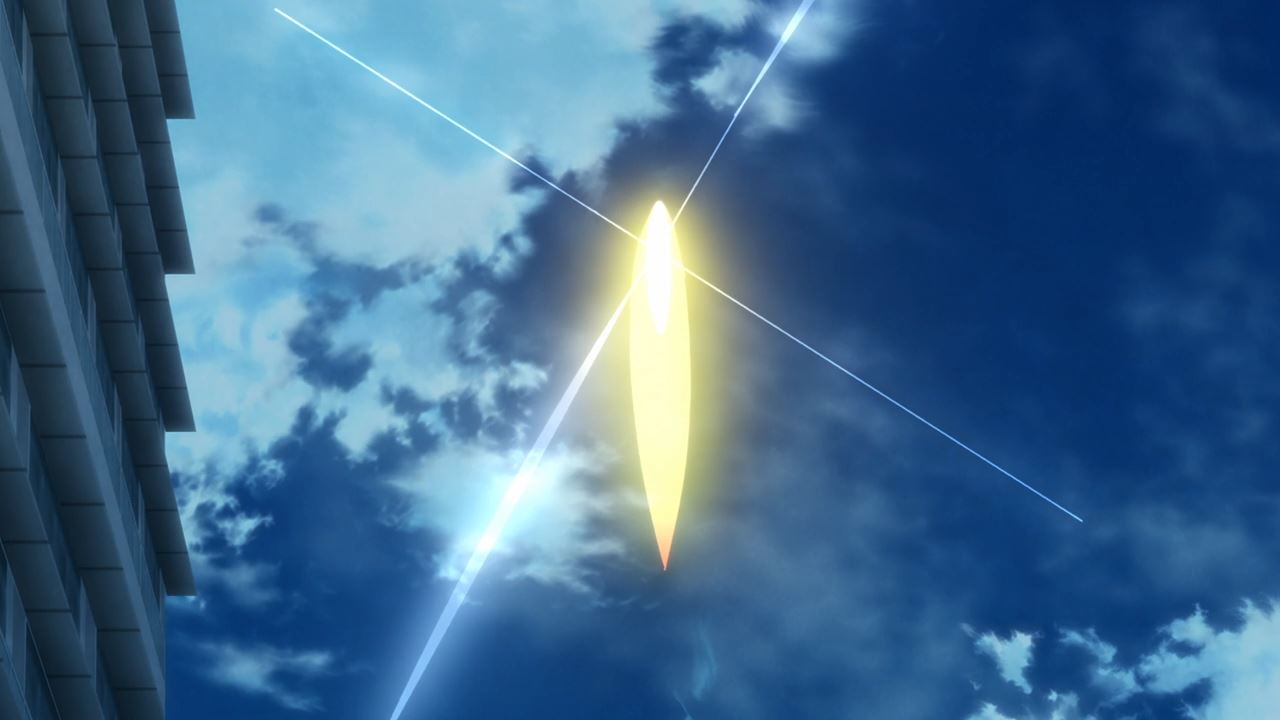 Thus, she went back to the sky to help her adopted mother Emilia. But wait, I’m worried that Alas Ramus won’t return once they defeated Gabriel! 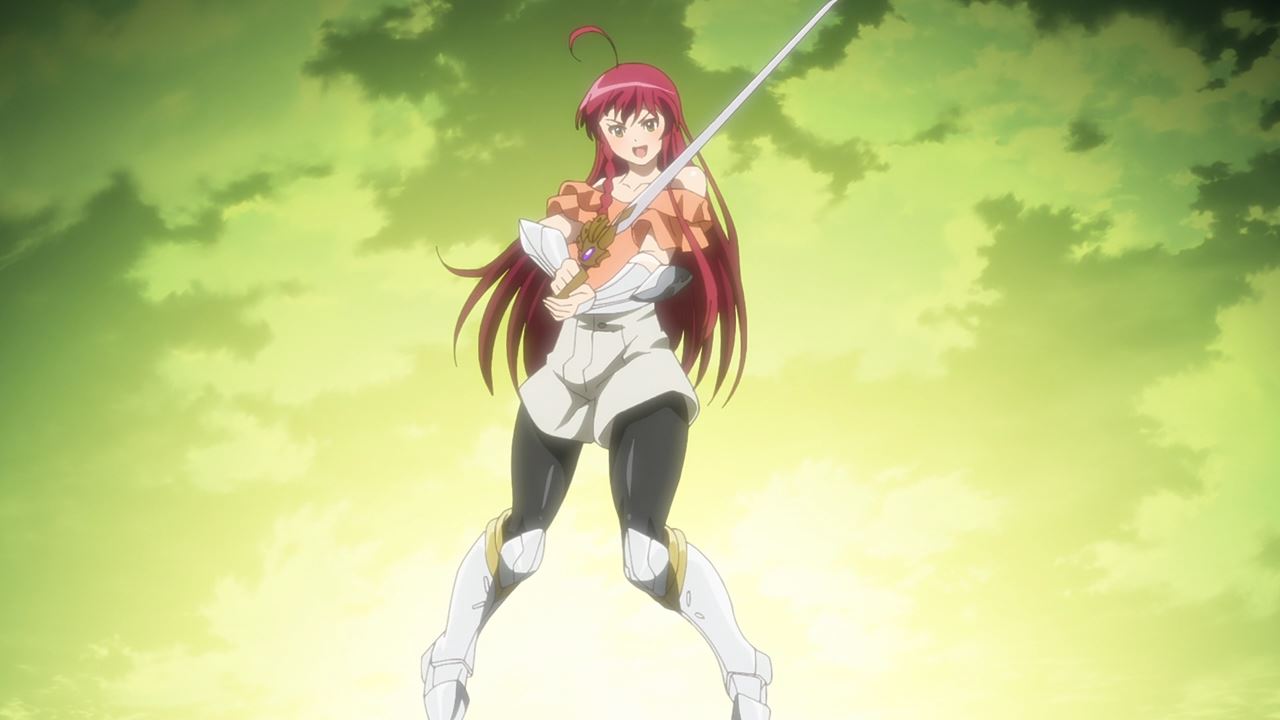 Anyways, Alas transformed herself into a set of armor and a new sword for Emi Yusa. Not surprising since she’s born from Yesod’s shards, but I’m still worried that Gabriel’s sword might destroy her. 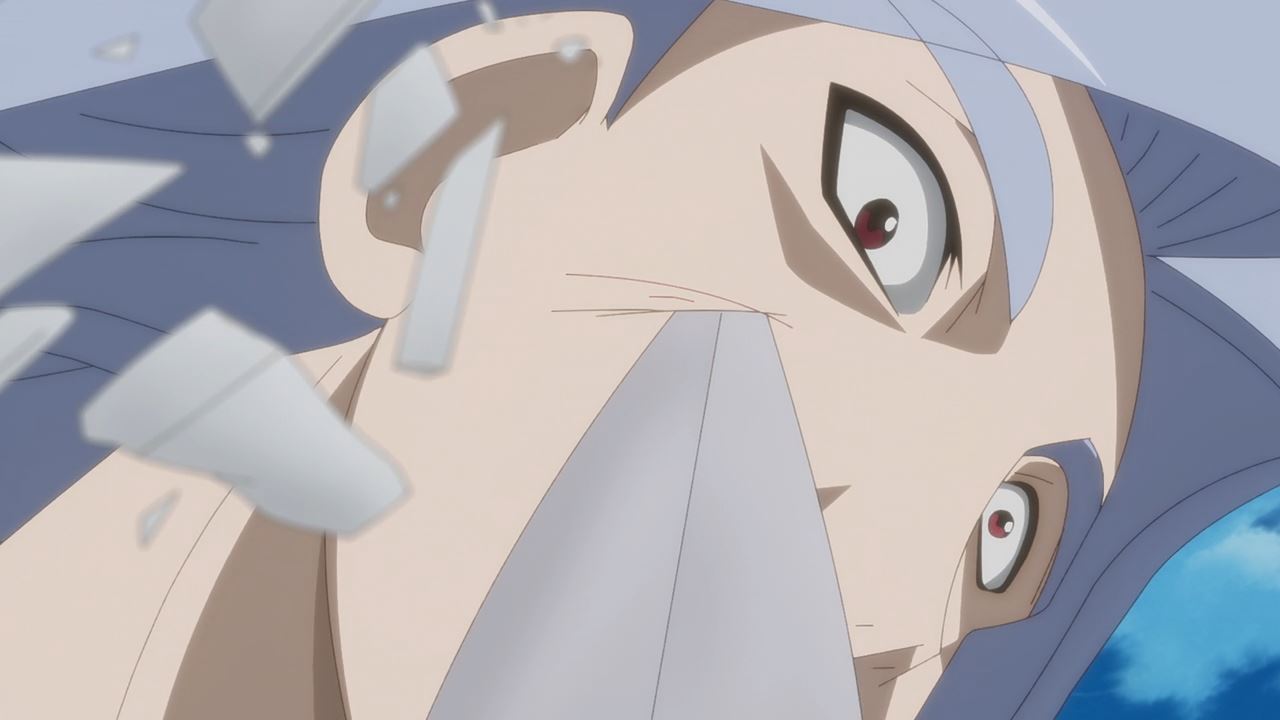 Surprisingly, Alas Ramus’ sword not only destroyed Durandal, but it inflicted a cut on Gabriel’s beautiful face. Oh noes, he’s gonna lost his temper now that Emilia ruined it! 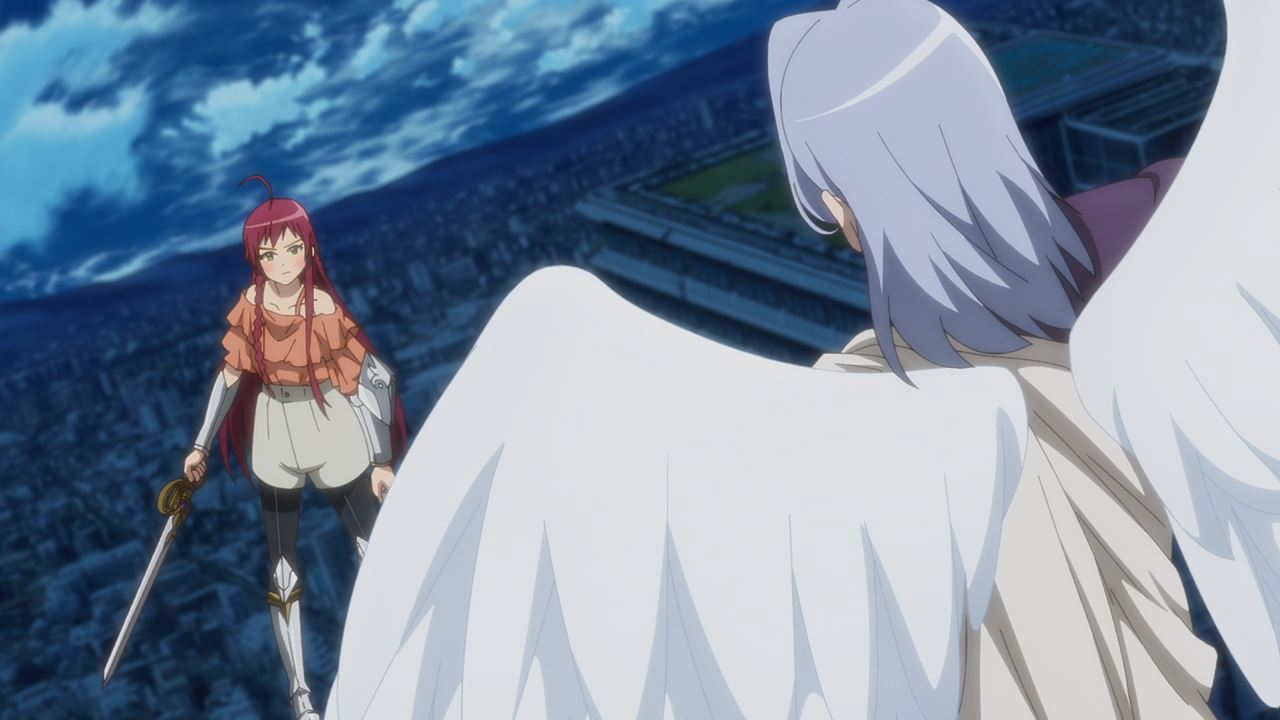 However, it appears that he’ll have to retreat for the time being as Gabriel warned Emilia that she should prioritize the world’s safety as the archangel doesn’t want another demon lord taking over Earth and Ente Isla.

Oh really Gabriel, I don’t think there will be a second coming of Satan because the current demon lord wants to rise up the ranks and become the CEO of MgRonald someday. 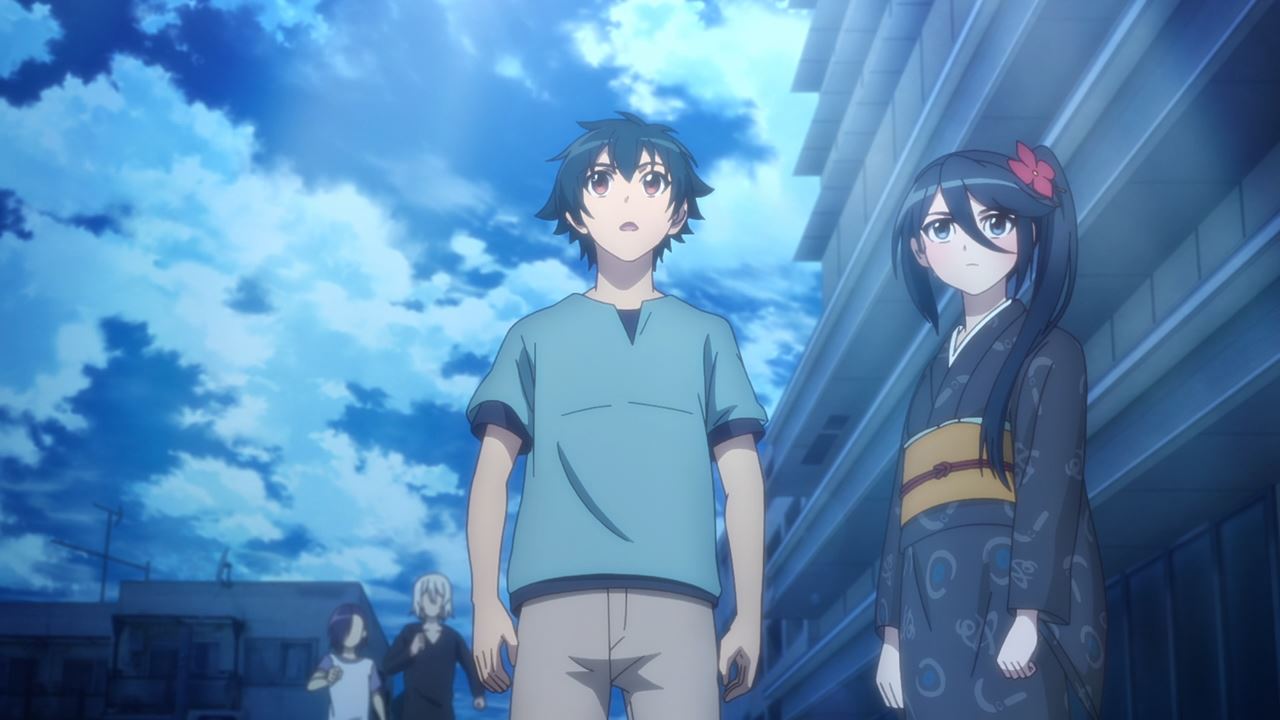 And so, Gabriel managed to escape where he’ll return to take Alas Ramus again. But wait a minute, what about the baby? 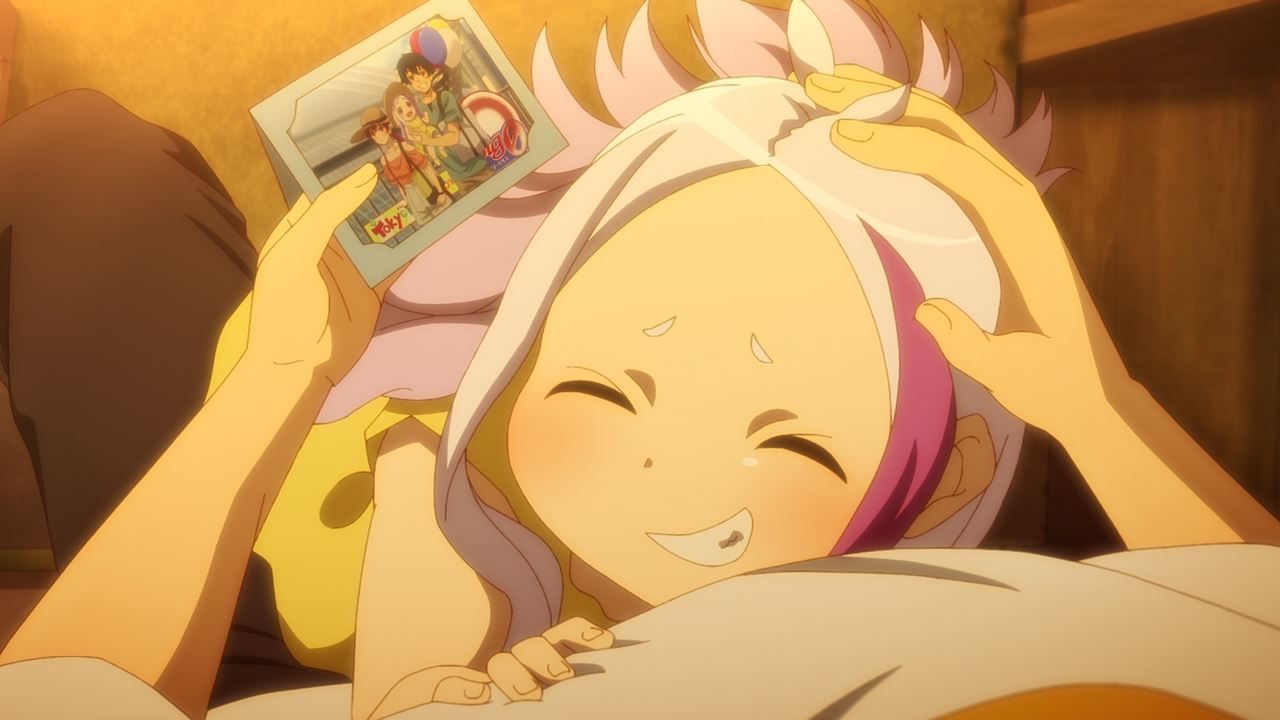 Oh, Alas Ramus is still there as Sadao Maou is really glad to see her again. I mean, he almost lost hope once Satan heard that Alas disappeared without a trace. 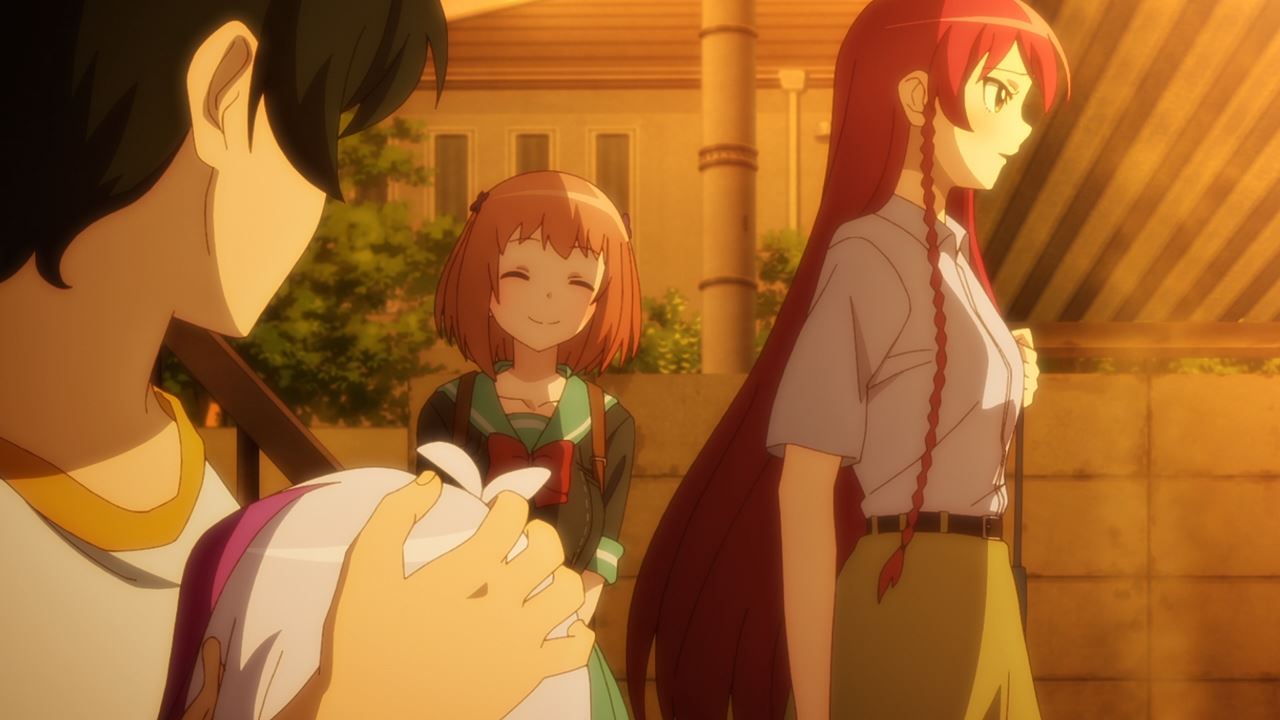 By the way, turns out that Emi Yusa kept Alas Ramus for a long time as she wants her arch-enemy to feel that he lost something important to him. What a cruel hero she is!

Still, I’m glad that Alas Ramus will stay in Maou-sama’s hands for the time being. 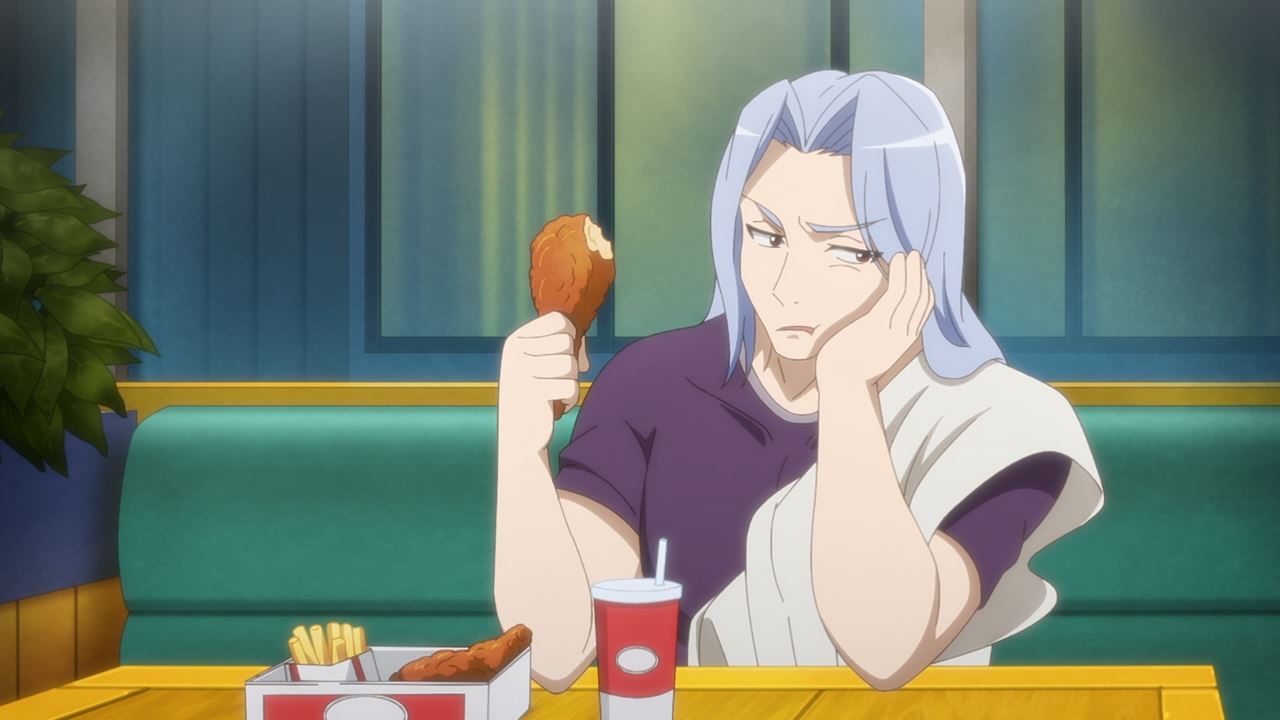 Now then, let’s end this episode where Gabriel is chomping some fried chicken at Sentucky Fried Chicken. He’s really frustrated as he didn’t get Alas Ramus, but his sword and beautiful face got ruined by Emilia. 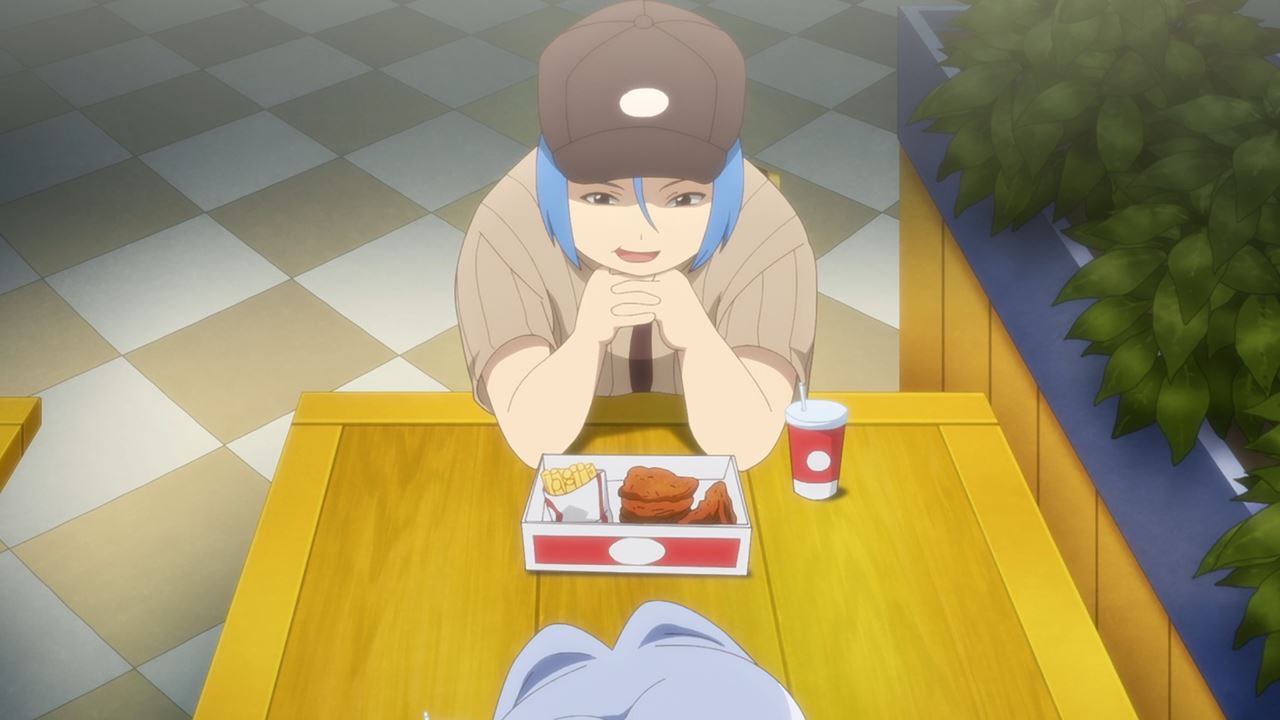 Meanwhile, here’s Sariel where he has an idea on who stole the shards of Yesod. Said person happened to be Emilia’s mother Lailah where it’s a mystery on why she stole those shards in the first place, let alone her whereabouts.

Anyways, I’ll see you next time where the plot thickens now that the shards of Yesod have brought to the real world.