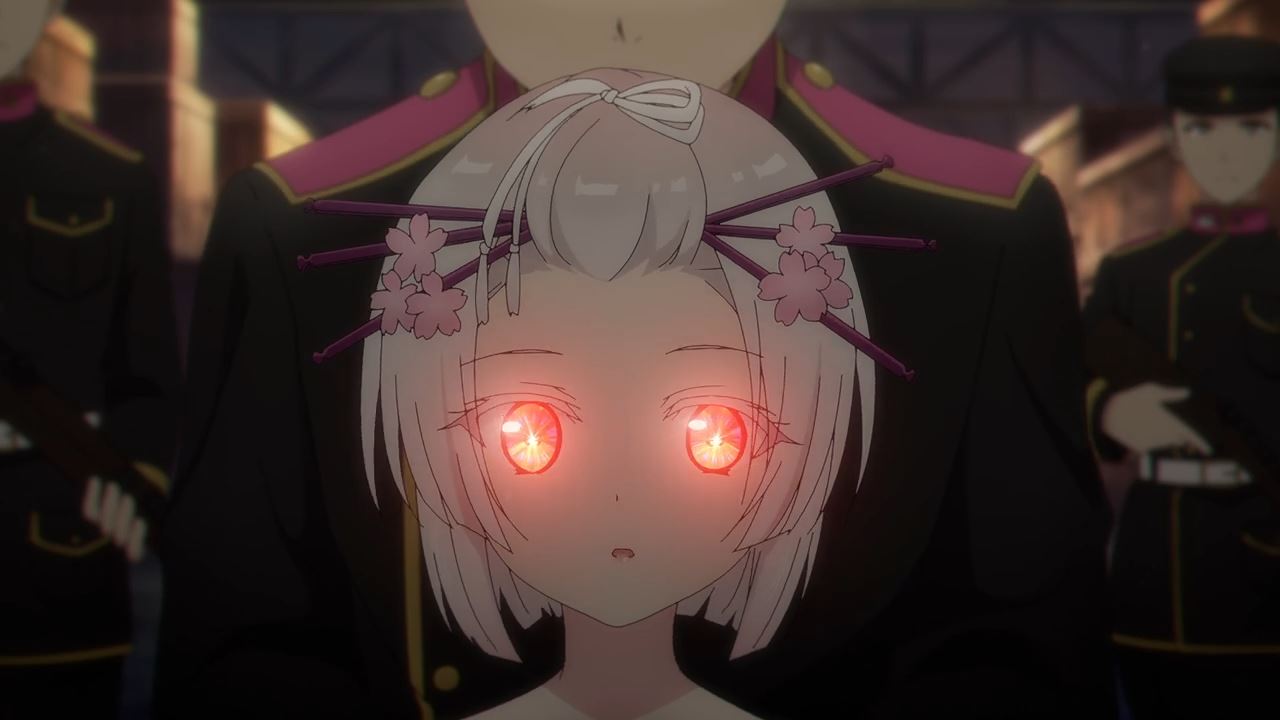 Let’s begin this episode where the Imperial Line Faction acquired an automata as they just activate it. However, it appears that they made a mistake as the automata is about to lose control.

Honestly, it looks like the Imperial Line Faction are really foolish in continuing the war effort, even as far as reactivating machines that are beyond repair. 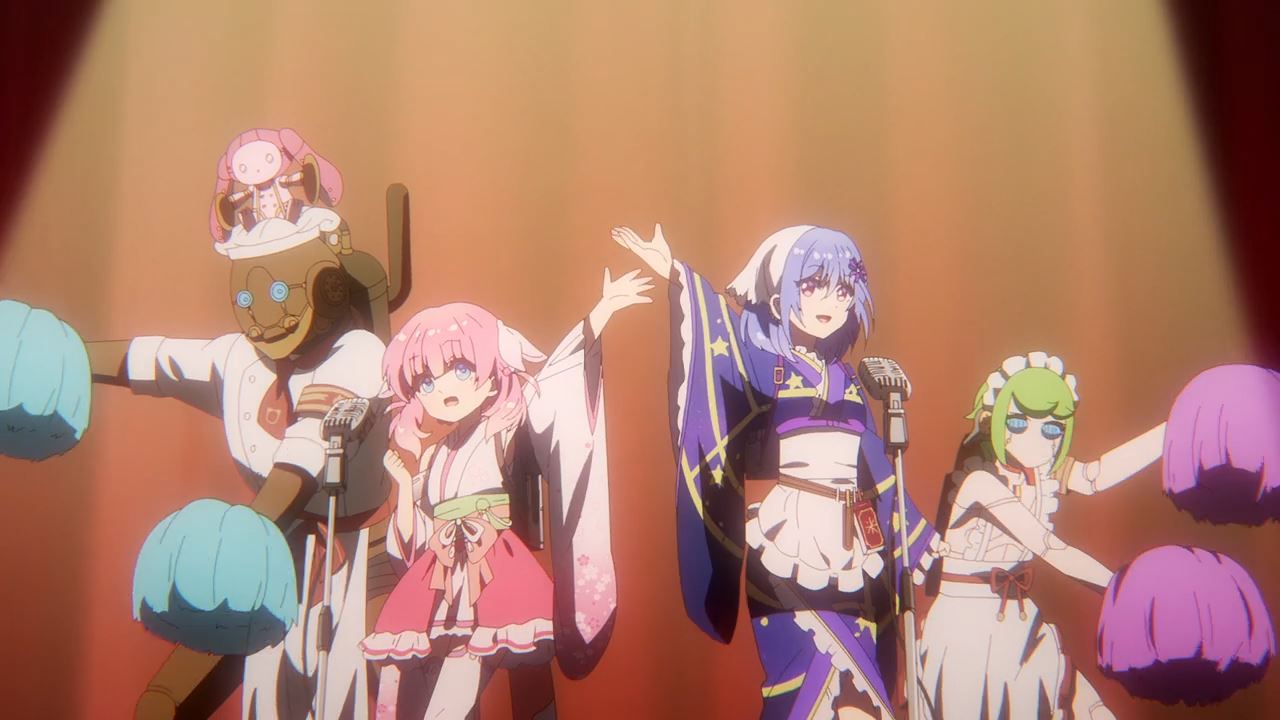 But let’s return to Kuroneko-tei where the café is booming as Haizakura and Houkiboshi sing during the evening hours. Then again, I wish there’s another automata who wants to sing and dance. 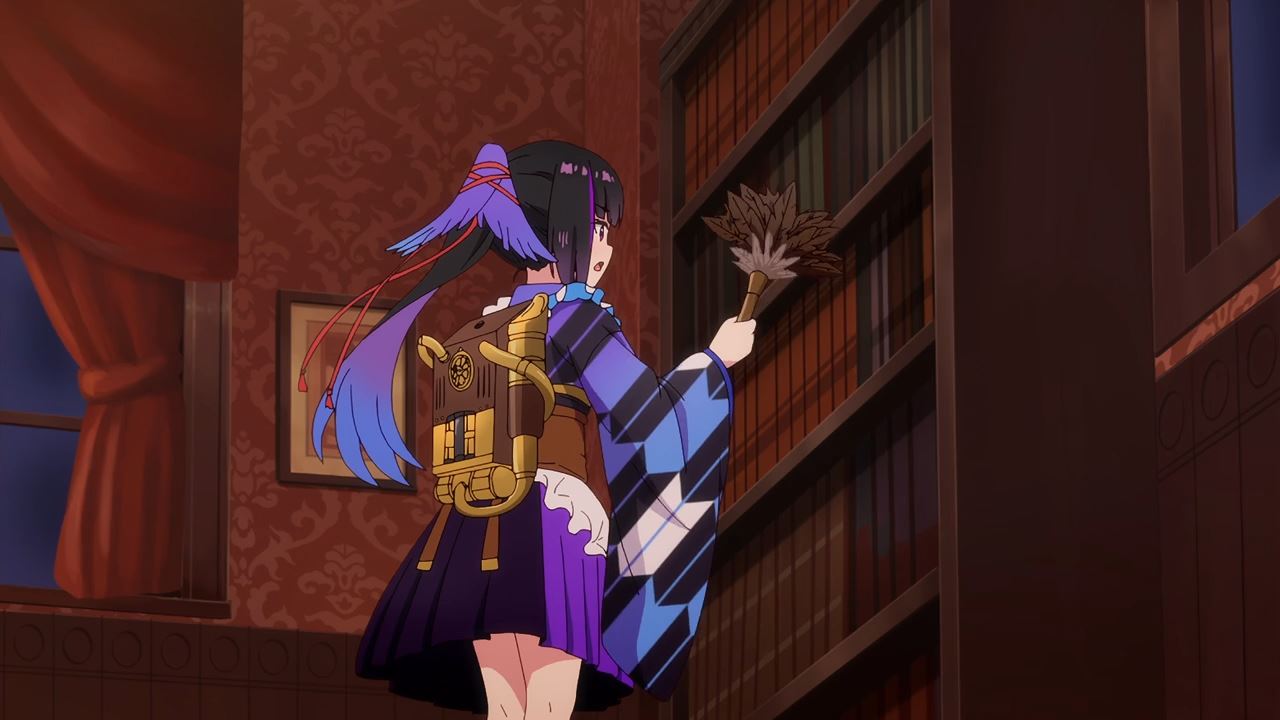 Said automata happened to be Karasuba where despite being a long-time companion to Nagi Touma, she’s a bit bossy and uptight. 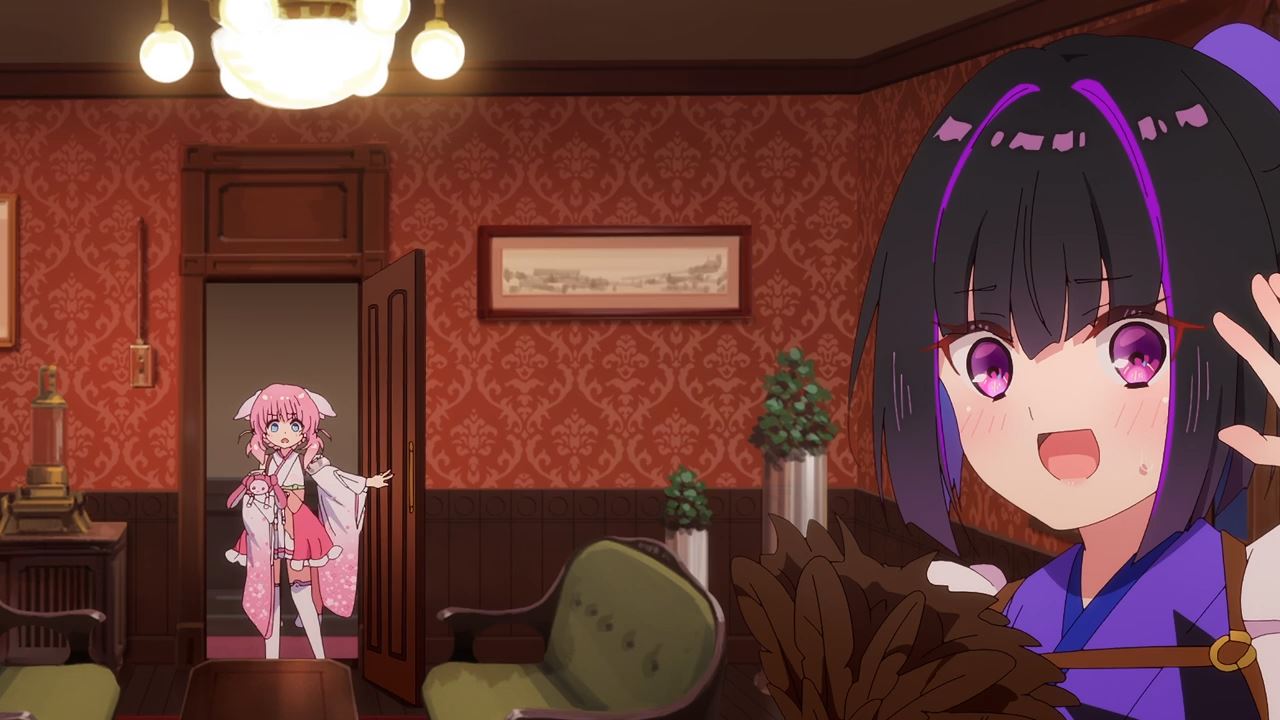 That is until she strikes a pose in which Haizakura sees Karasuba’s brief transformation into a cute girl. Looks like Karasuba is gonna chew her co-worker out! 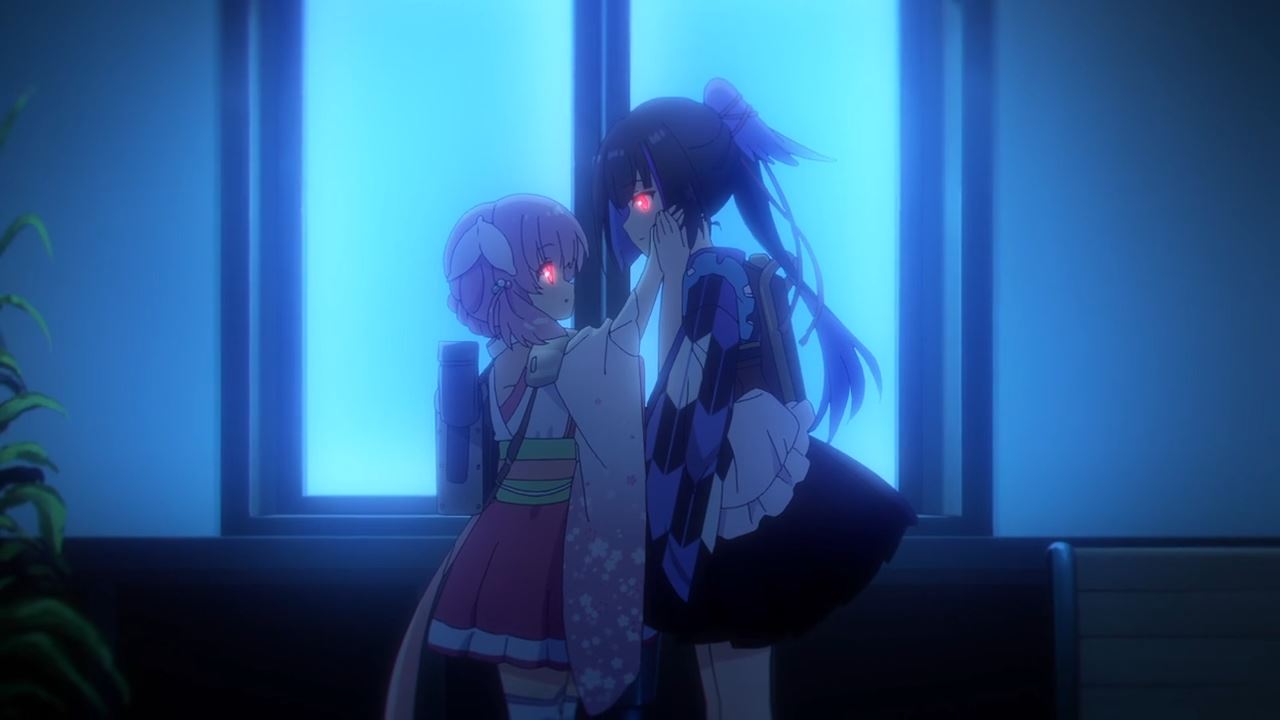 But, it appears that Karasuba decides to tell her a backstory instead where she went through hardship together with Nagi Touma. 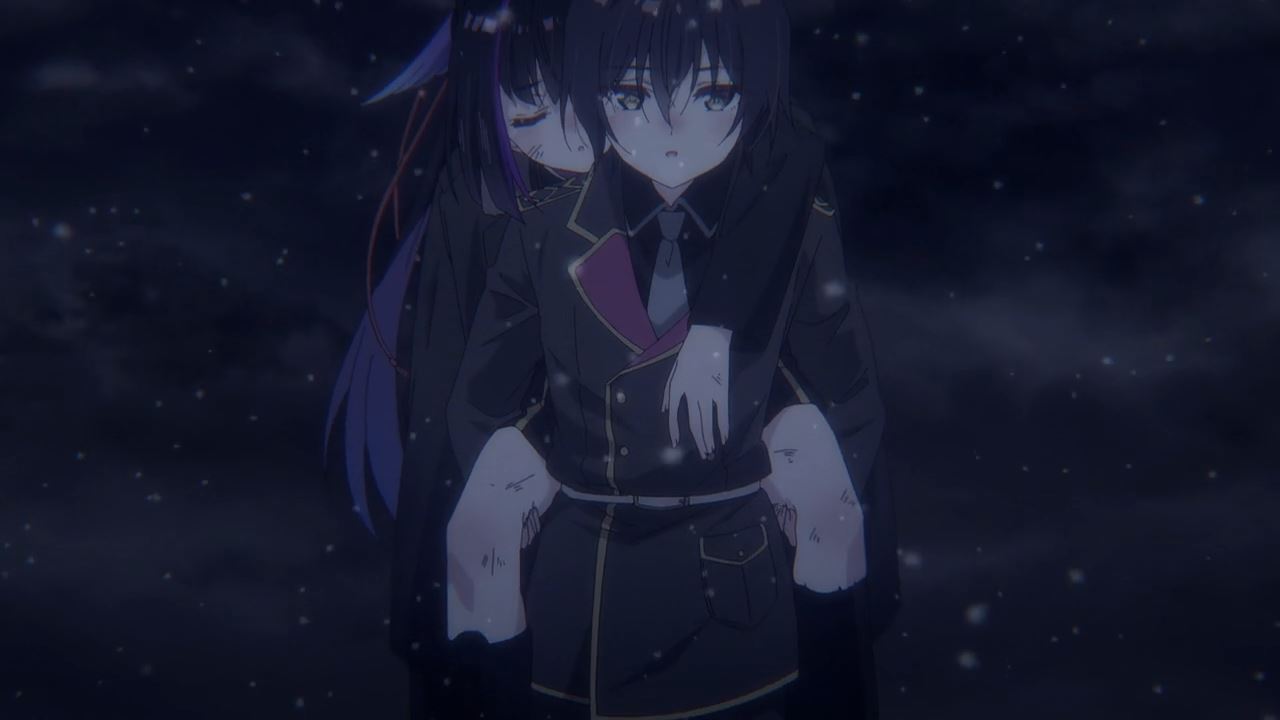 And as you can see, Karasuba lost a leg during the war where she’s about to be scrapped, only for Nagi to rescue her from the scrap heap by gathering materials to fix her broken left leg.

Yes, their time during the war was a rough one, but they persevered that Nagi Touma and Karasuba settled peacefully in the city and set up a café. 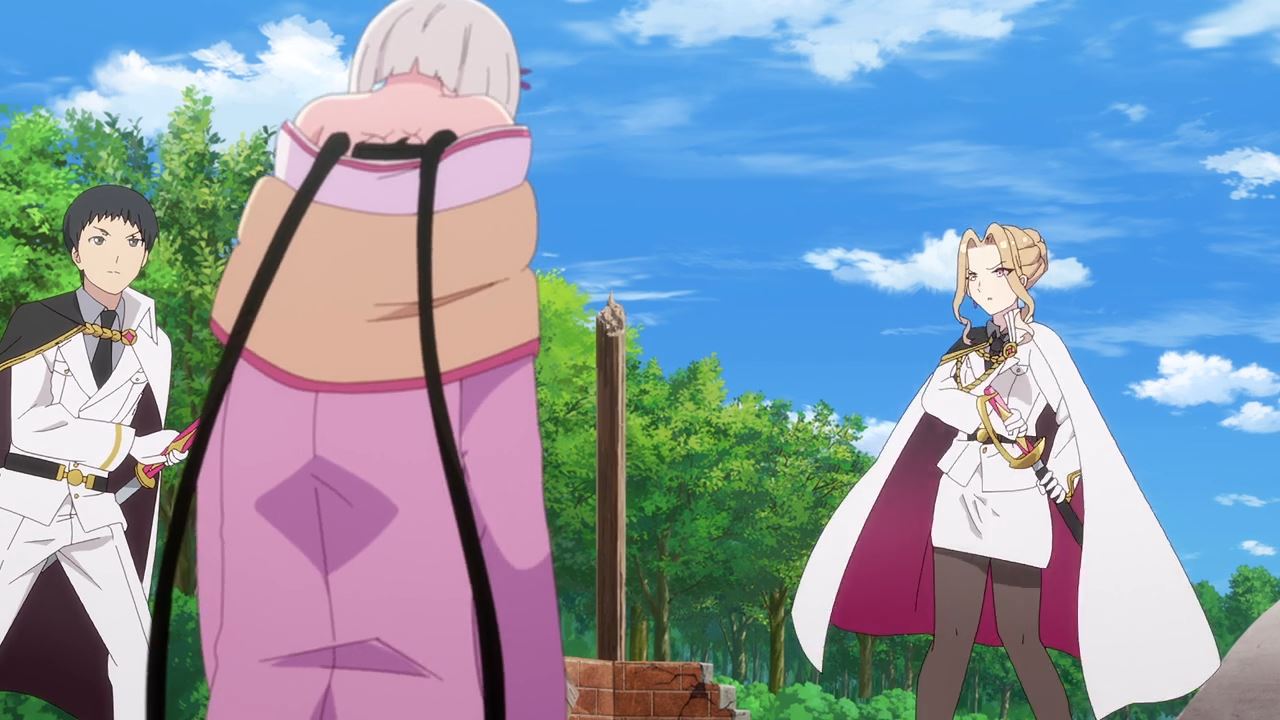 Now then, let’s return to the present where Otome Okunomiya asked Nagi Touma for assistance in investigating a rouge automata that was activated by the Imperial Line Faction.

Unfortunately, it appears that the automata reactivate itself where Otome and her fellow soldiers, plus Nagi-san are in grave danger. 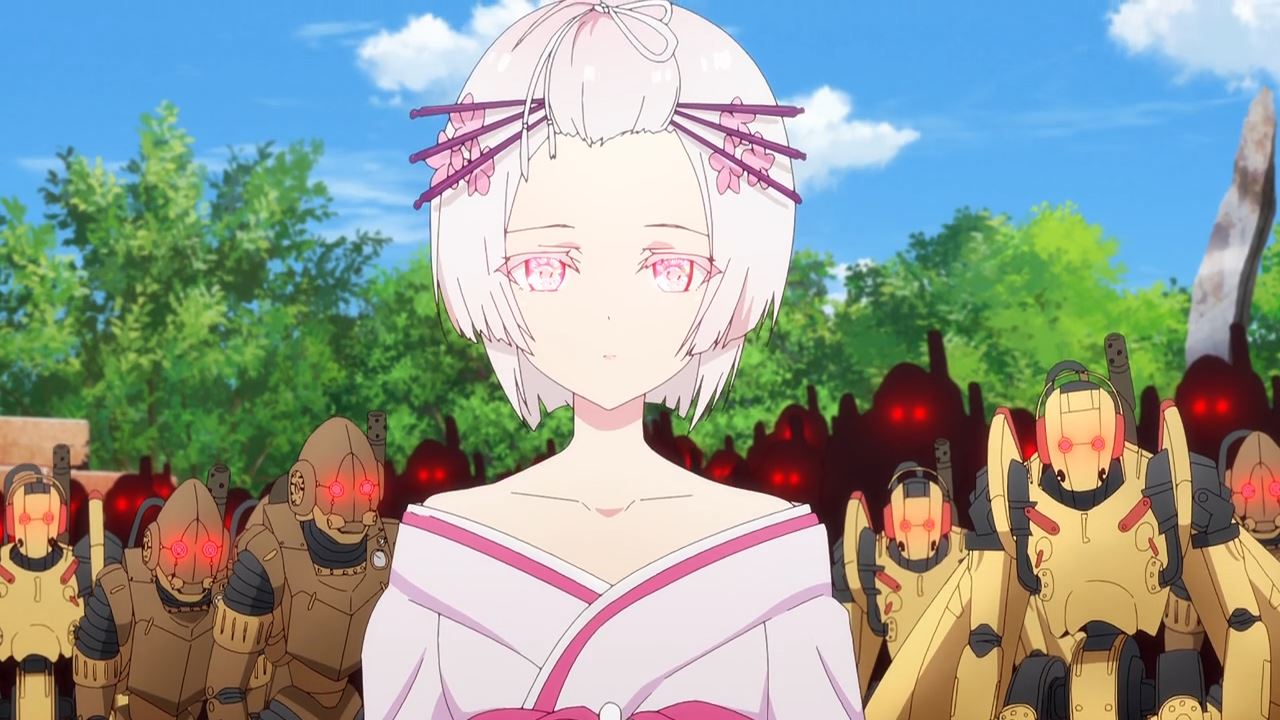 Seriously, I blame the Imperial Line Faction for being stubborn idiots as they bring more harm when reactivating a broken automata. 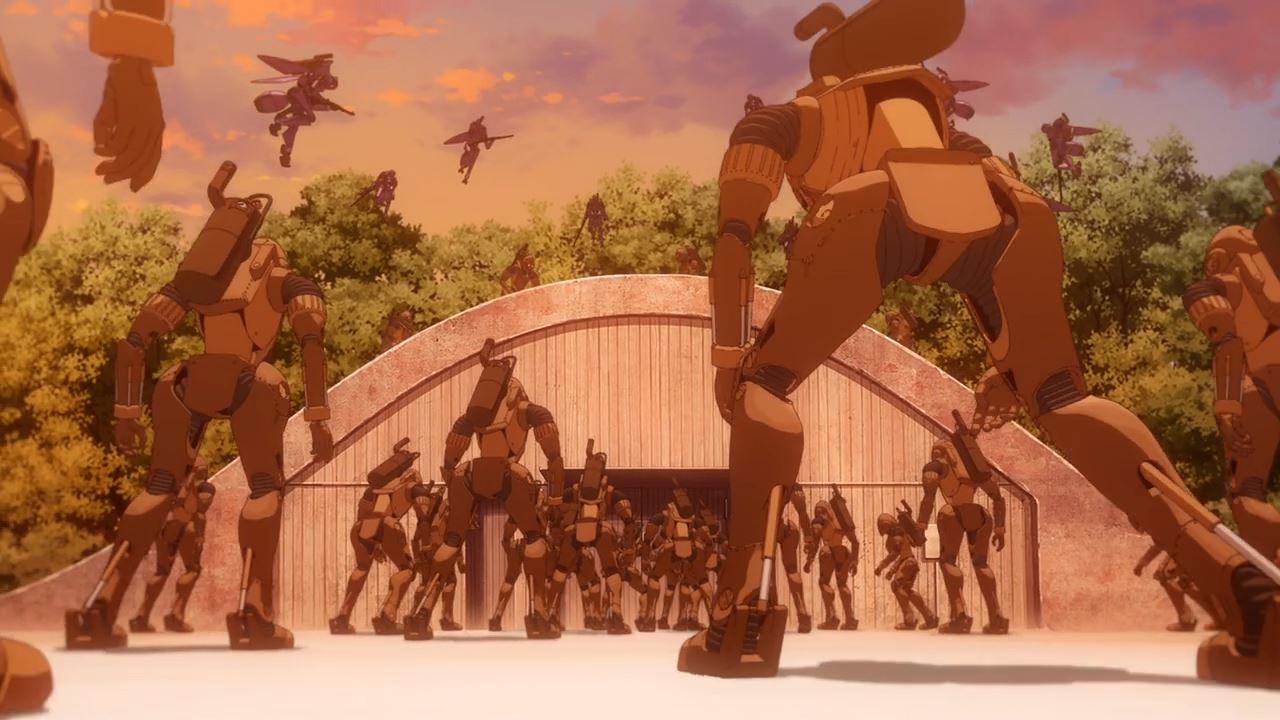 Now it seems that this episode has turned into a robot apocalypse where Nagi Touma, Otome Okunomiya, and her fellow soldiers took shelter inside a bunker. This is so messed up! 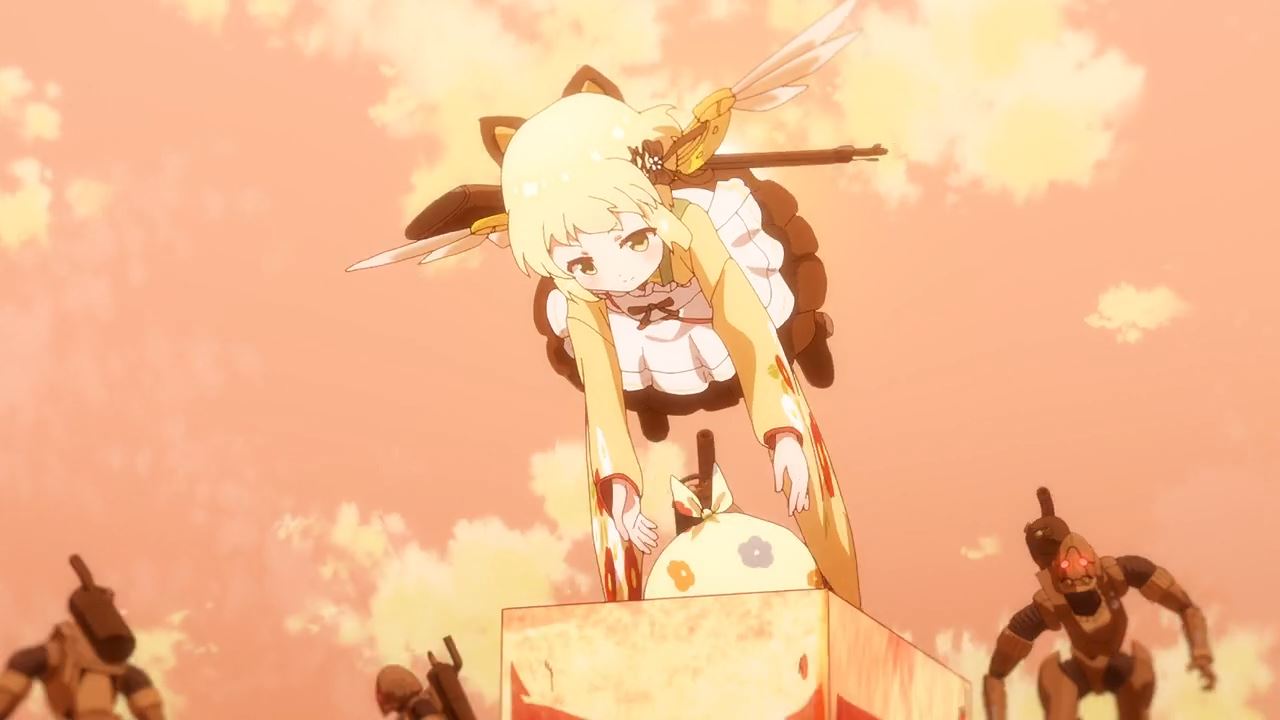 Fortunately, Nagi has an ace up his sleeve where he called Gekka for help where she delivered some goods. 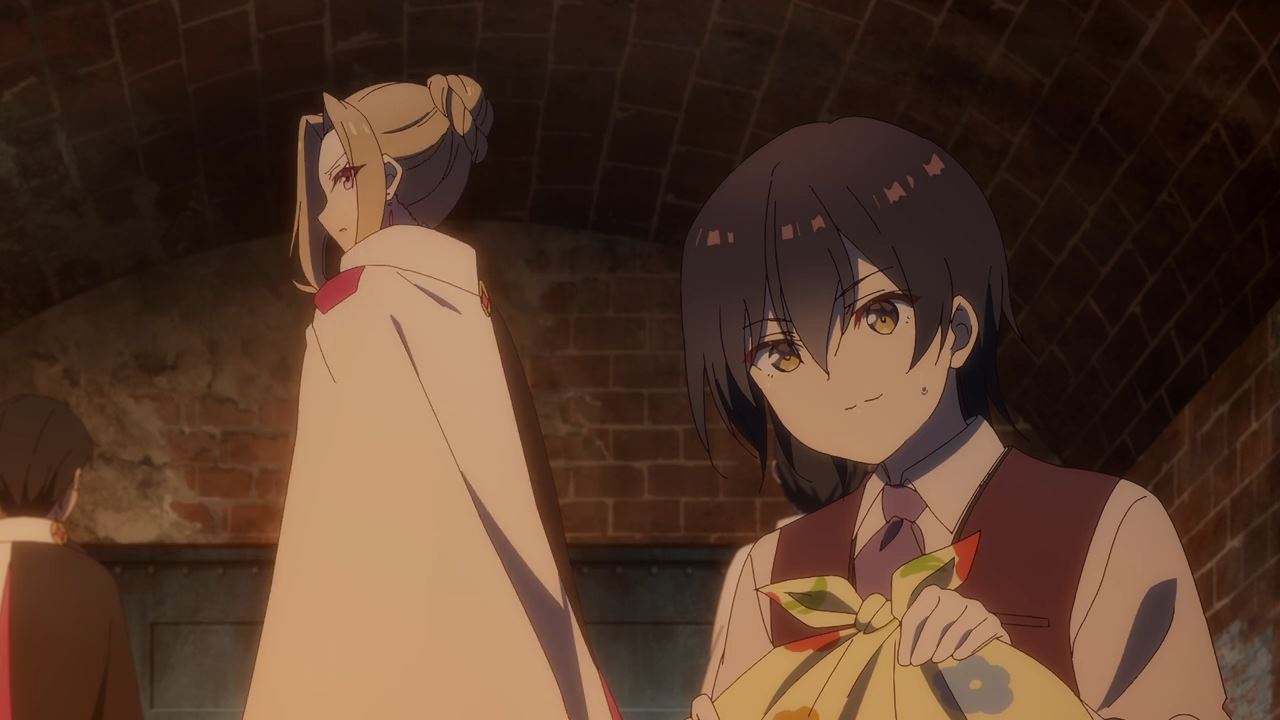 Oh yeah, said goods happened to be the components for a jamming device where Nagi will assemble it and deactivate the automata. Let’s hope that he succeeds. 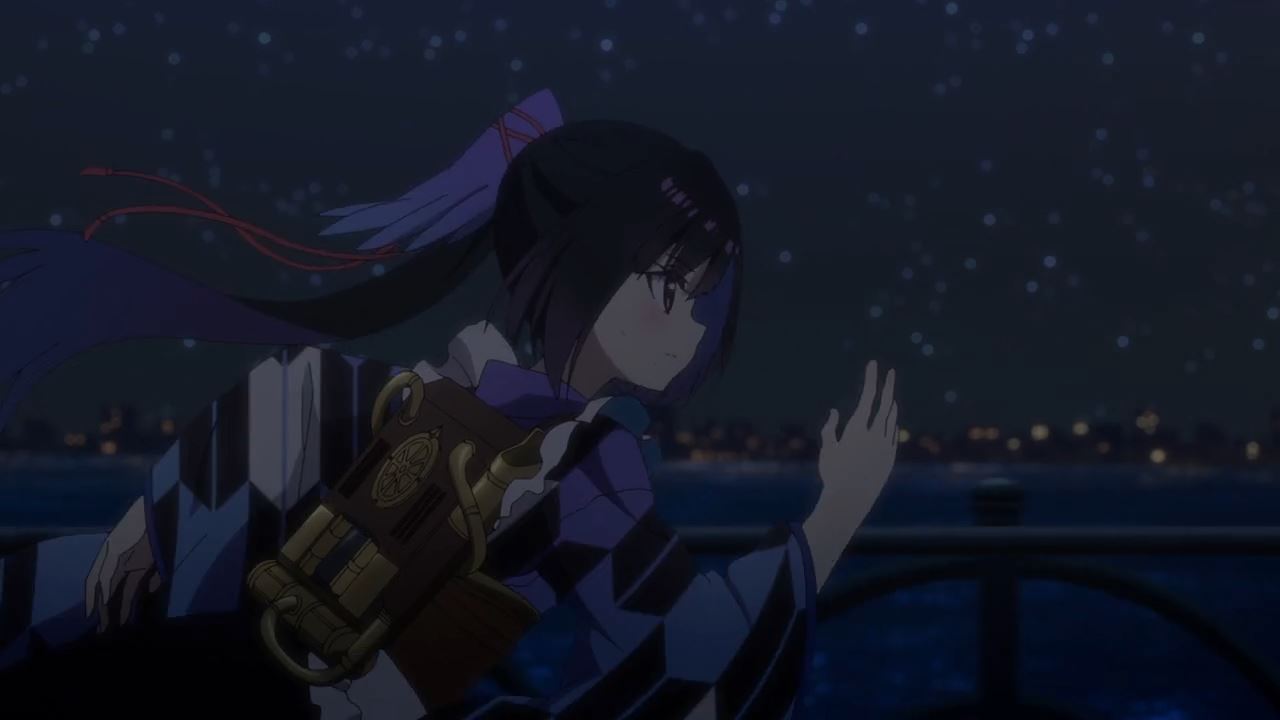 Meanwhile, here’s Karasuba where she caught wind about Nagi Touma being trapped in a bunker, thus she went to the scene in full-throttle. 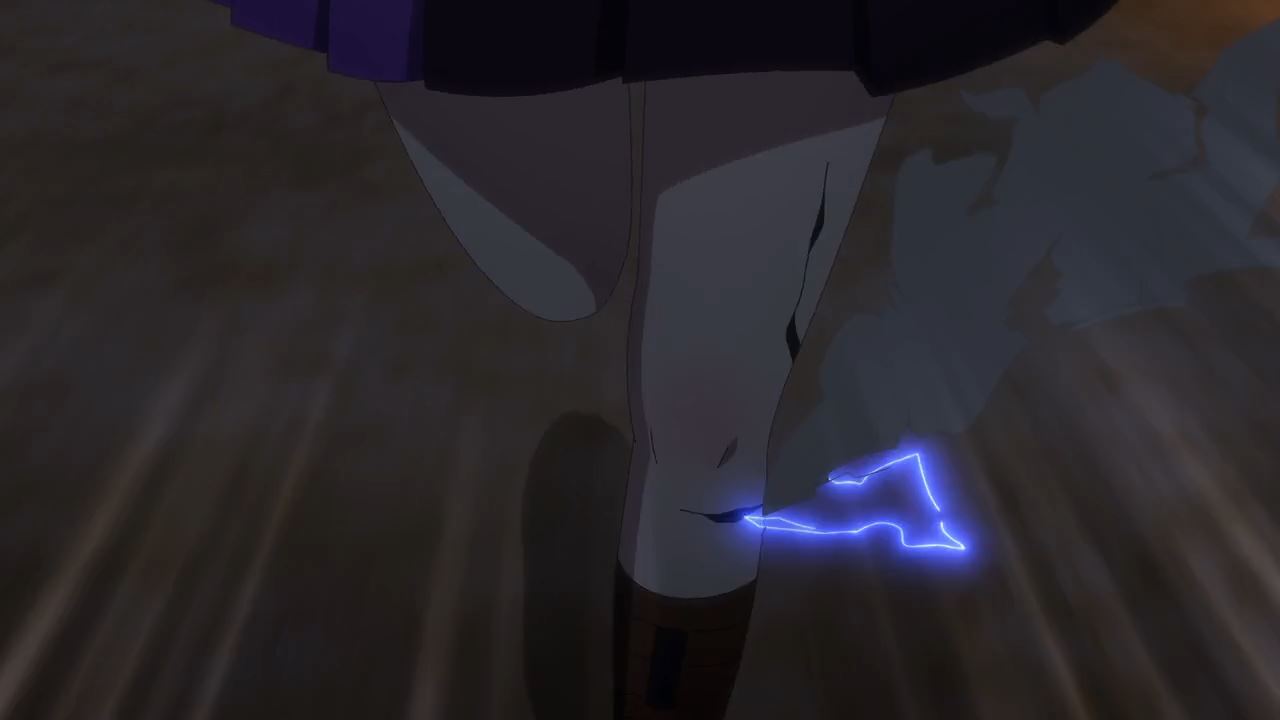 Of course, the only thing that worries me is her left leg as it’s gonna give way soon. Hell, I’m scared that her left leg will shatter into pieces midway through her trip. 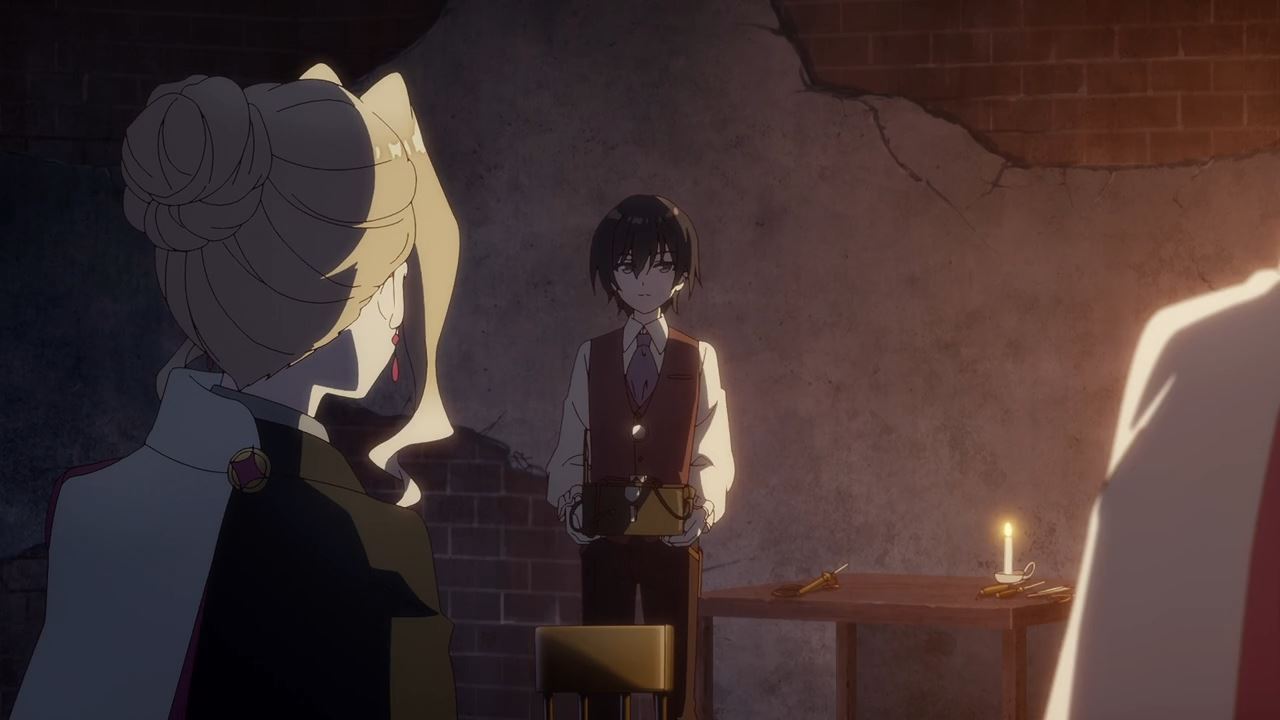 But let’s return to Nagi Touma where he finally finished making his jamming device. This will deactivate the rouge automata and her mechanica army. 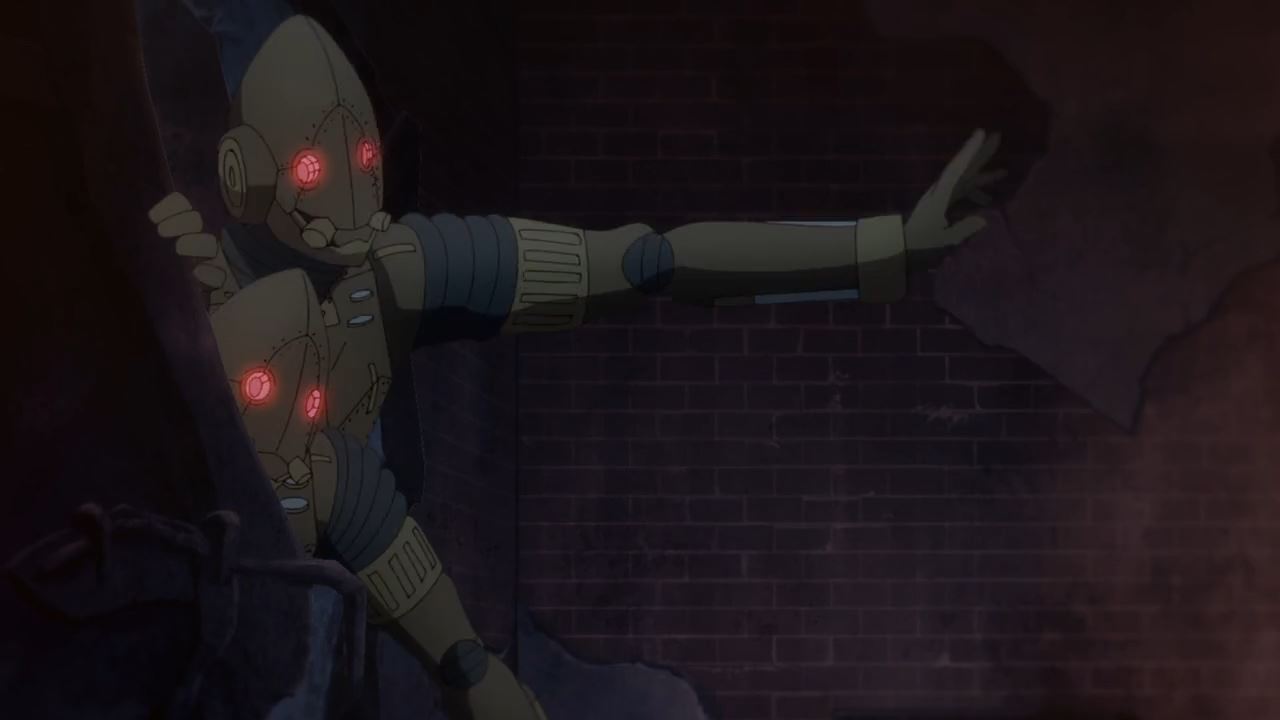 Unfortunately, the bunker doors are already gave way as the mechanica are about to murder some humans. 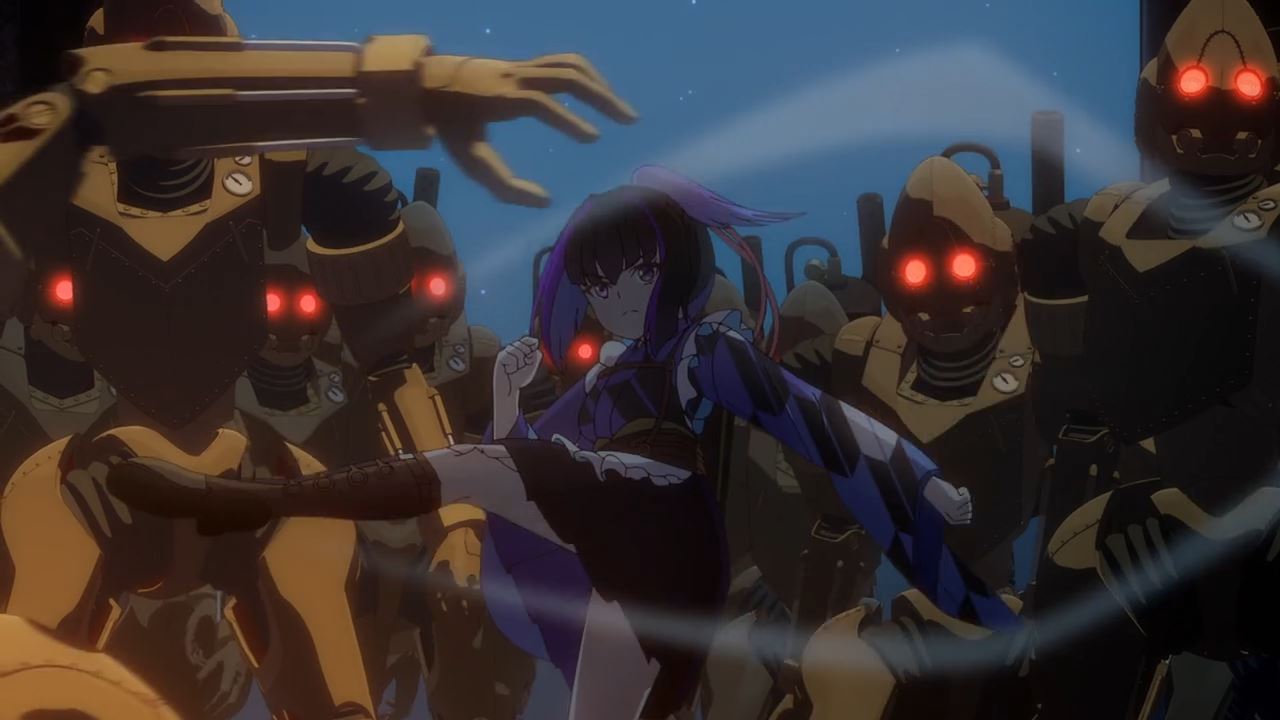 Luckily, Karasuba has just arrived where she save both Nagi and Otome-san by kicking one of those rogue mechanica.

Sadly, her left leg got wrecked on her way to rescue her master so at this point, it’s up to Nagi Touma where he’ll use the jamming device. Let’s pray that it works. 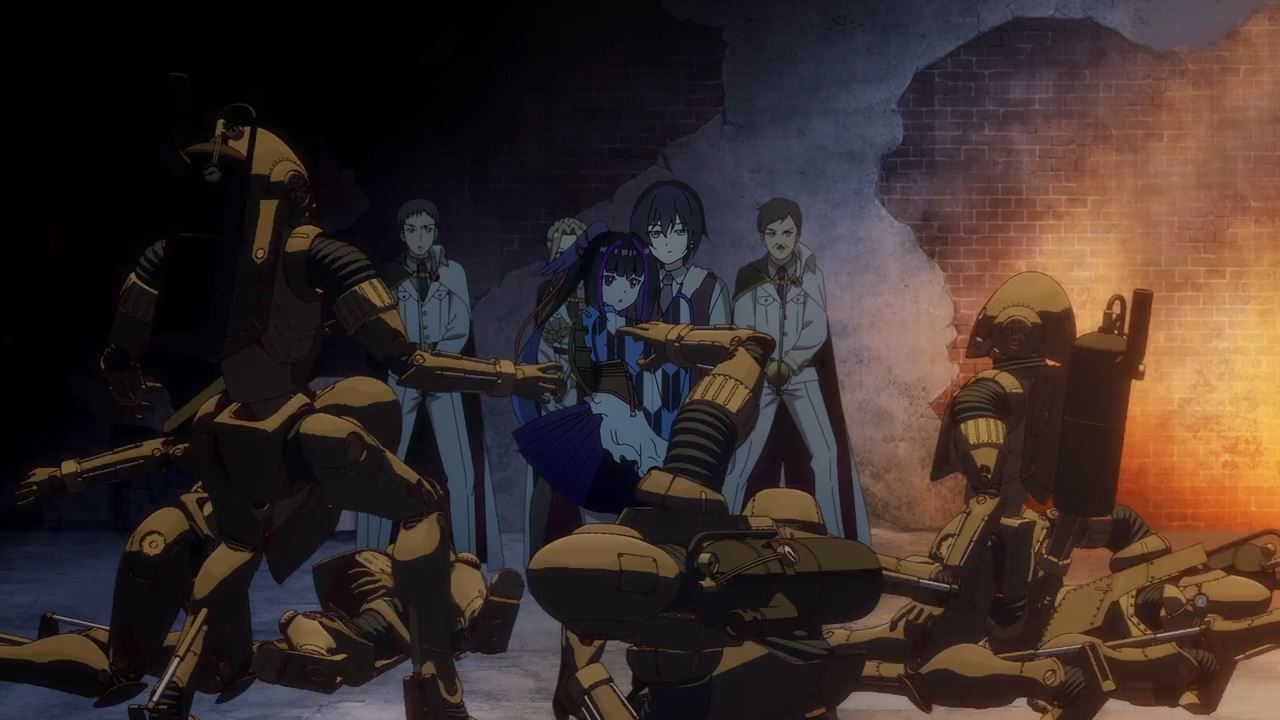 However, there’s no need to use his jamming device as the mechanica spontaneously shut down. Now I wonder if the rogue automata is already deactivated? 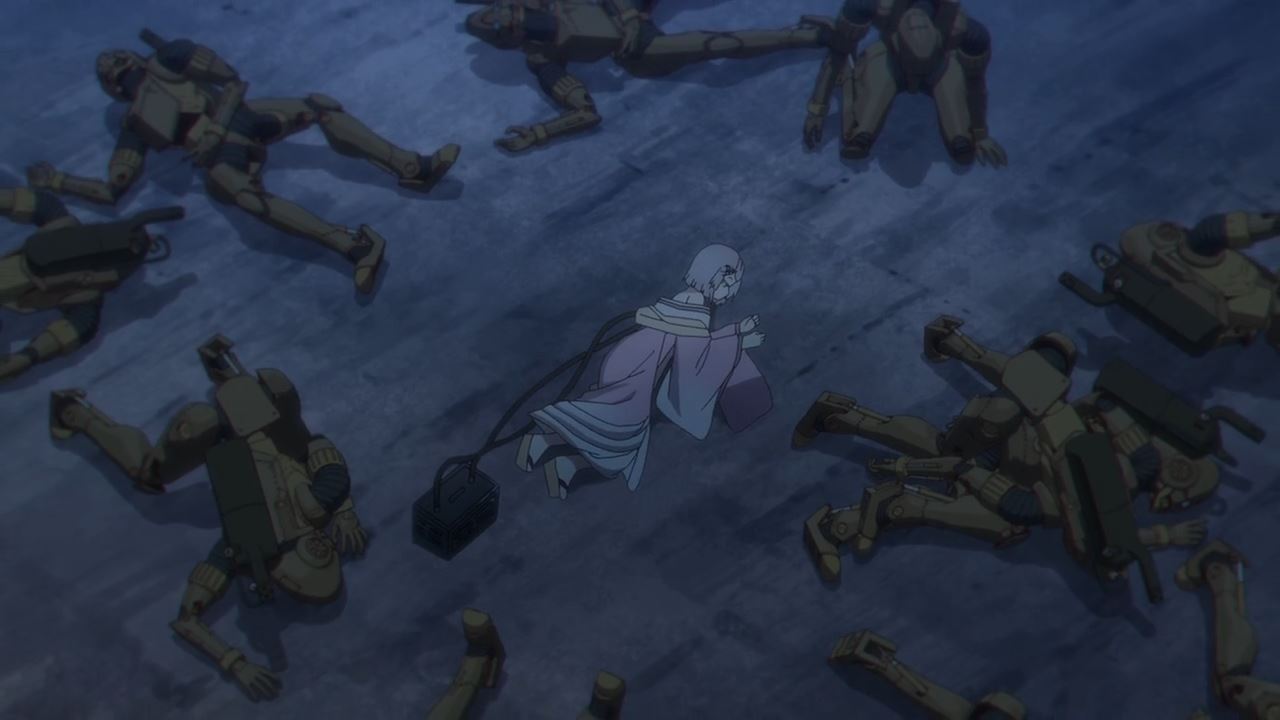 Oh, looks like her battery has ran out as the robot apocalypse is successfully thwarted.

I guess they got really lucky as the rogue automata returned to her deep slumber, although she won’t wake up again given that her logic system is beyond repair at this point. 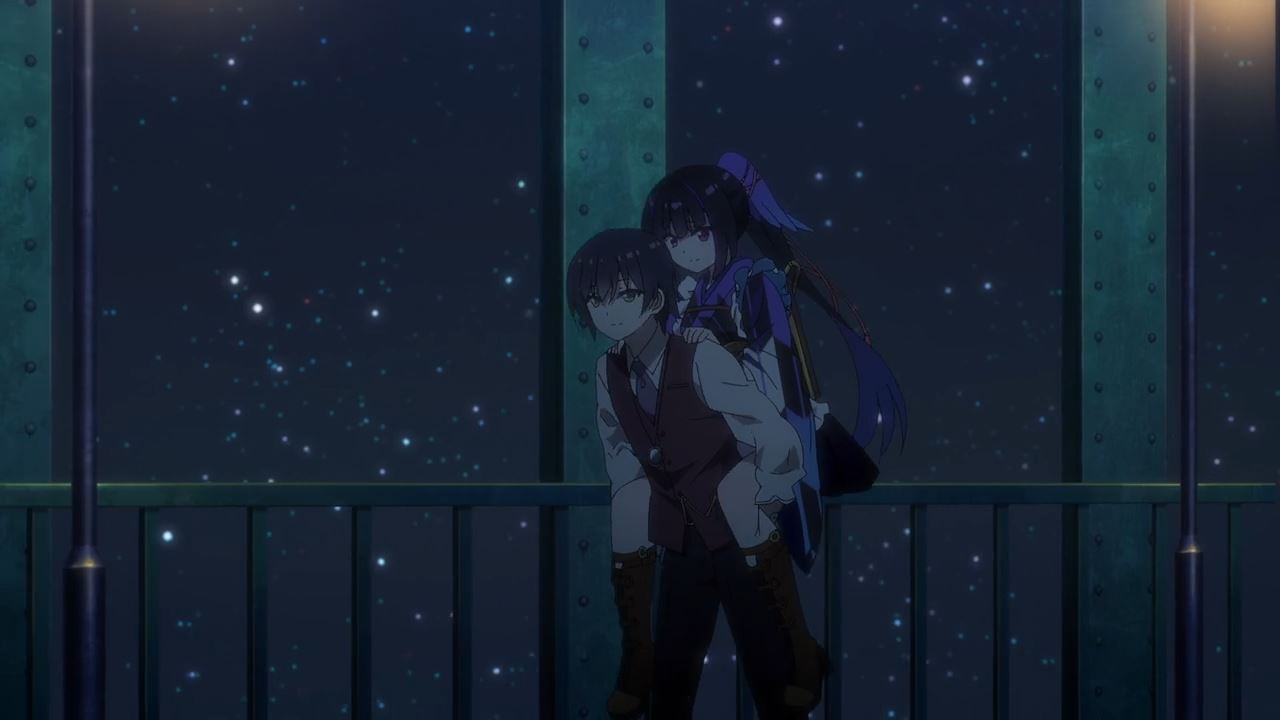 And now, it’s time to go home as Nagi Touma carries Karasuba to Kuroneko-tei just like old times. Of course, Nagi will repair her left leg again no matter how many time she broke it.

All I can say is that Karasuba’s backstory is really sad where the military disposes automata and mechanica once they’re completely broken due to extensive use. Also, I feel that there’s some allusion to Tomori Kusunoki where she has joint problems much like her character she played in this show.

One last thing, I’m still curious on how and why did the Imperial Line Faction smuggled and attempts to reactivate a broken automata in the first place? Something tells me that there’s more to this radical group who wants to continue the war. 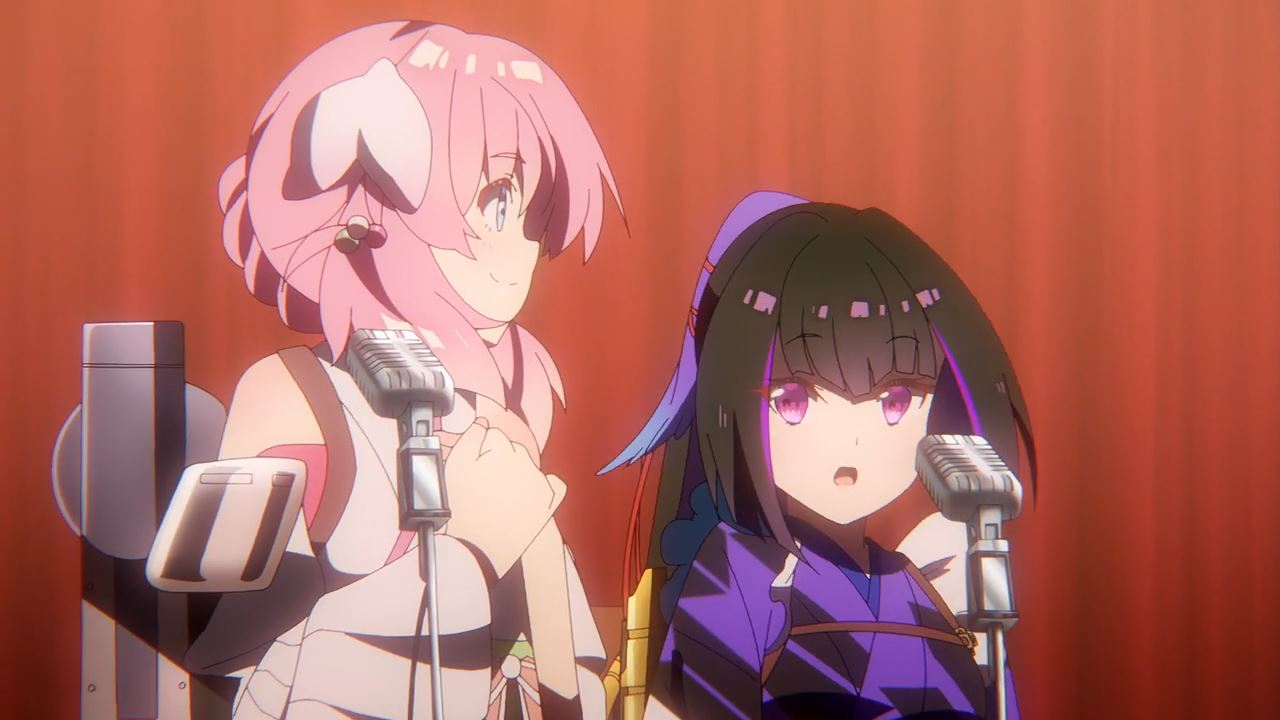 Anyways, let’s end this episode on a positive note where Haizakura and Karasuba performed as a duet at Kuroneko-tei.

Even though her legs are currently broken, Karasuba can still sing. With that said, I’ll see you next time!