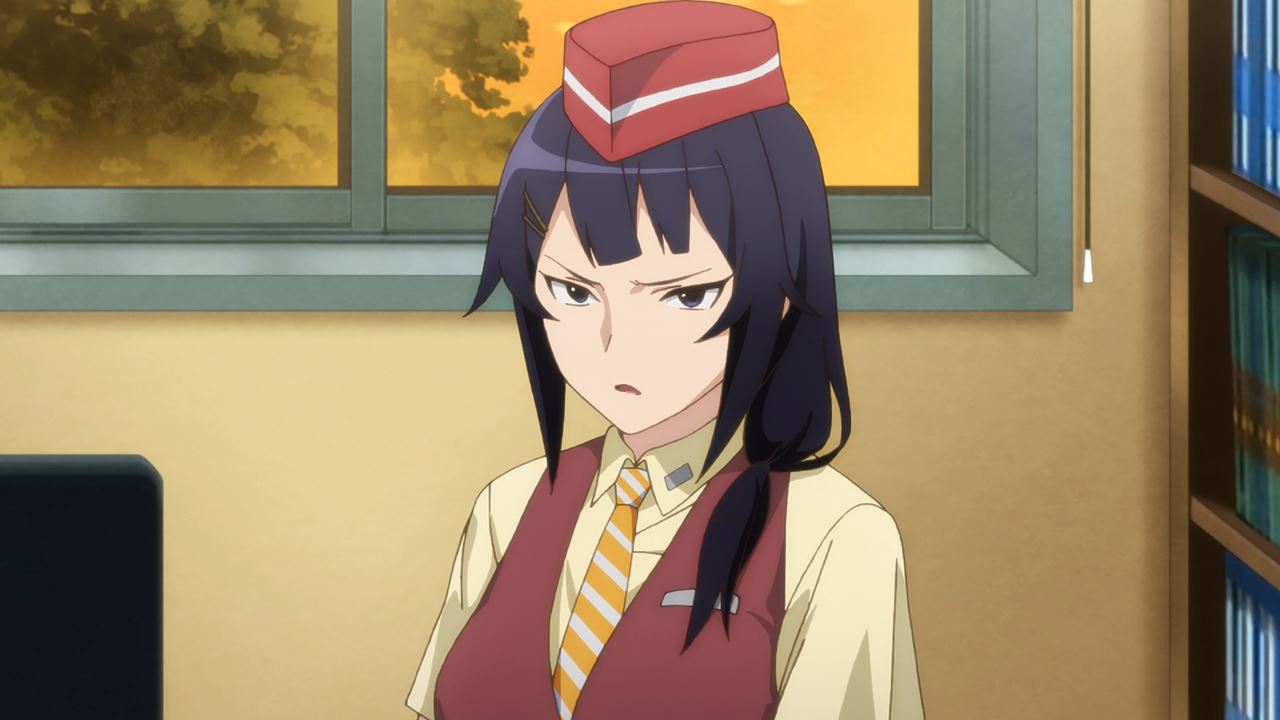 Well, it appears that this episode begins with some bad news where Mayumi Kisaki told everybody that the Tokyo branch of MgRonald will be closed for renovation. 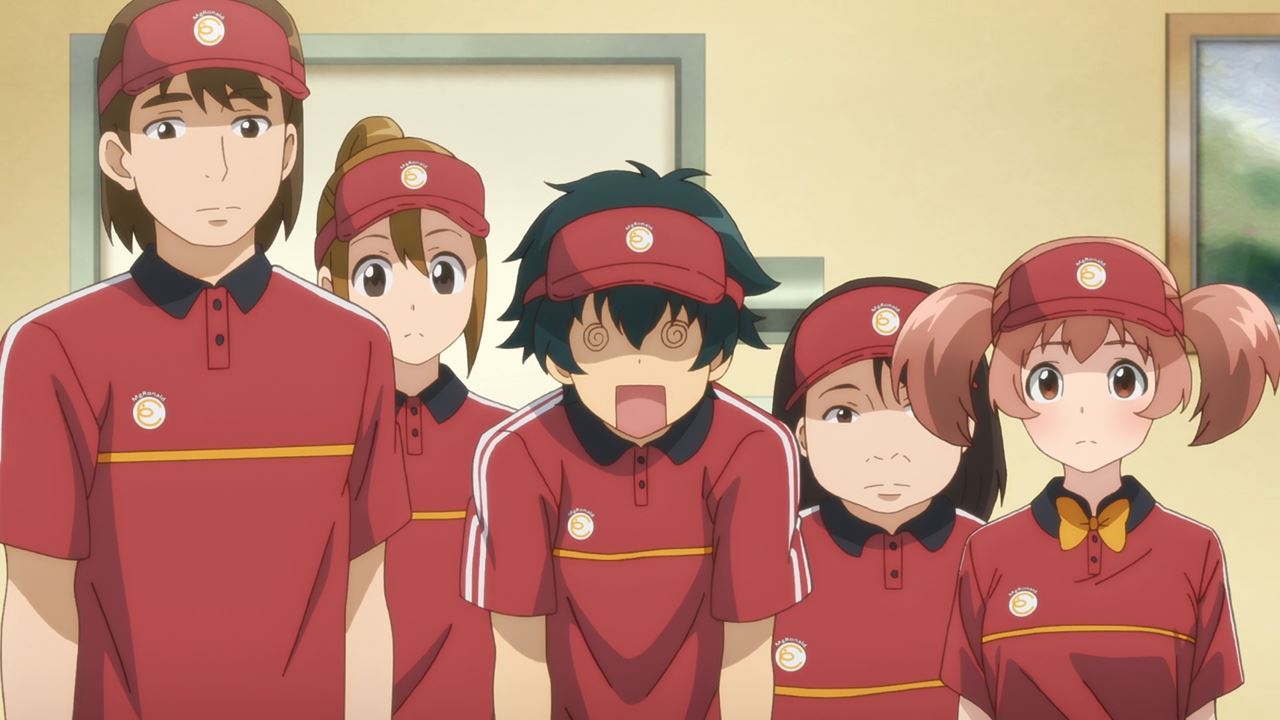 This means that Sadao Maou will be out of the job until the renovation is finished. Speaking of renovations, the apartment building where Maou-san currently lives there will also be closed for the same reason.

Basically, Maou-san is not only jobless but also homeless… temporary. C’mon, it’s not like MgRonald will fire him permanently given that he’s a hardworking employee. 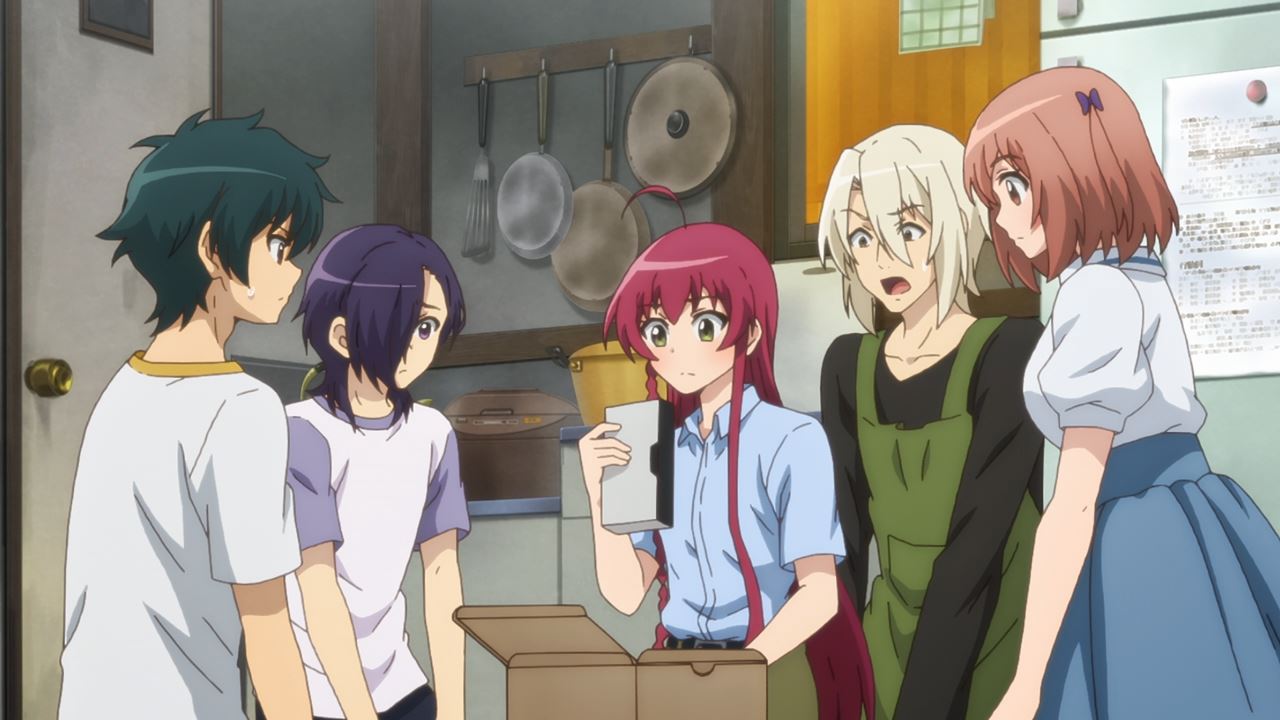 Fortunately, it appears that the landlady gave him a job opportunity where Sadao Maou received… a freakin’ video tape. Wait a minute, Maou-san doesn’t have a VCR since it’s outdated technology! 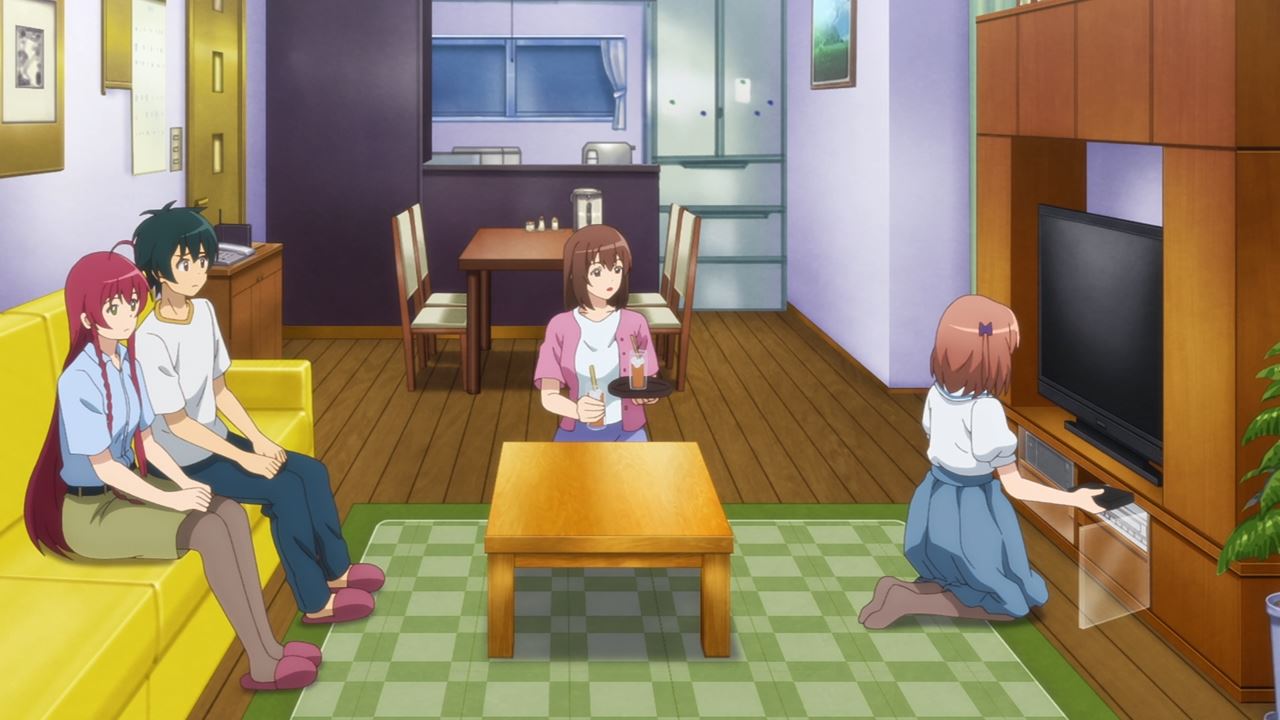 Luckily, Chiho Sasaki and her family got a VCR back home as Sadao Maou and his friends went to Chi-chan’s place and play the video tape. 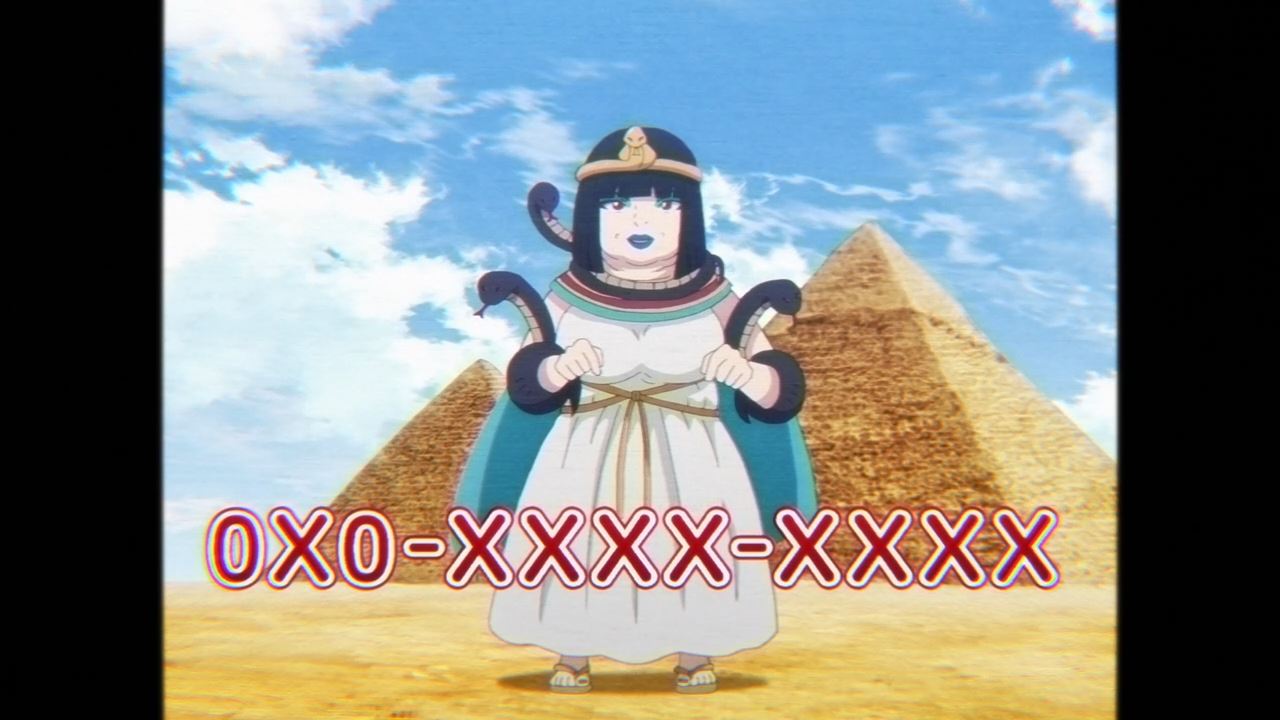 Oh yeah, here’s the apartment landlady where she’s one eccentric fellow as she travels around the world.

Also, she provided her friend’s telephone number if anyone’s interested in working part-time at a beach shack in Choshi, Chiba Prefecture. 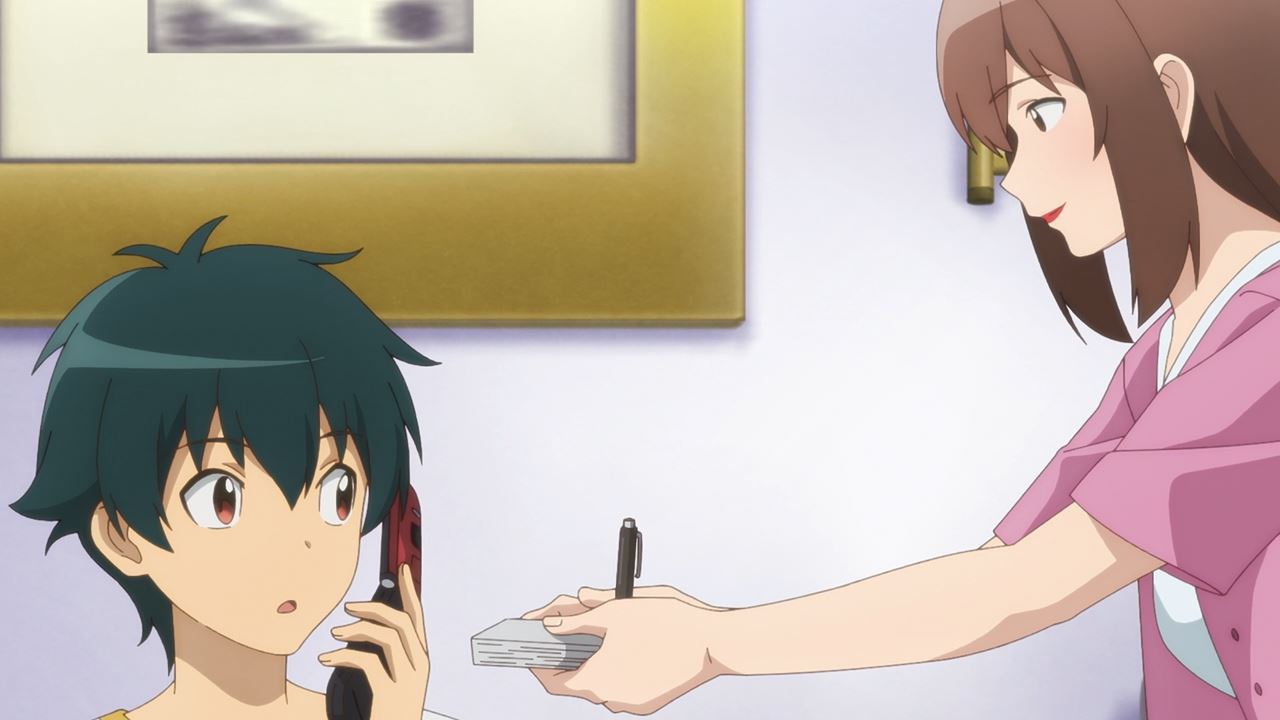 Anyways, here’s Maou-san where he called the landlady’s friend as he’s interested in taking the job. Oh, and Chiho’s mother gave him a notepad and a ballpen as he’ll take notes of the location.

By the way, Chi-chan’s mother is really supportive towards her daughter’s relationship with Sadao Maou. Then again, Chiho needs to wait until she reach the ripe age of 18 years old. 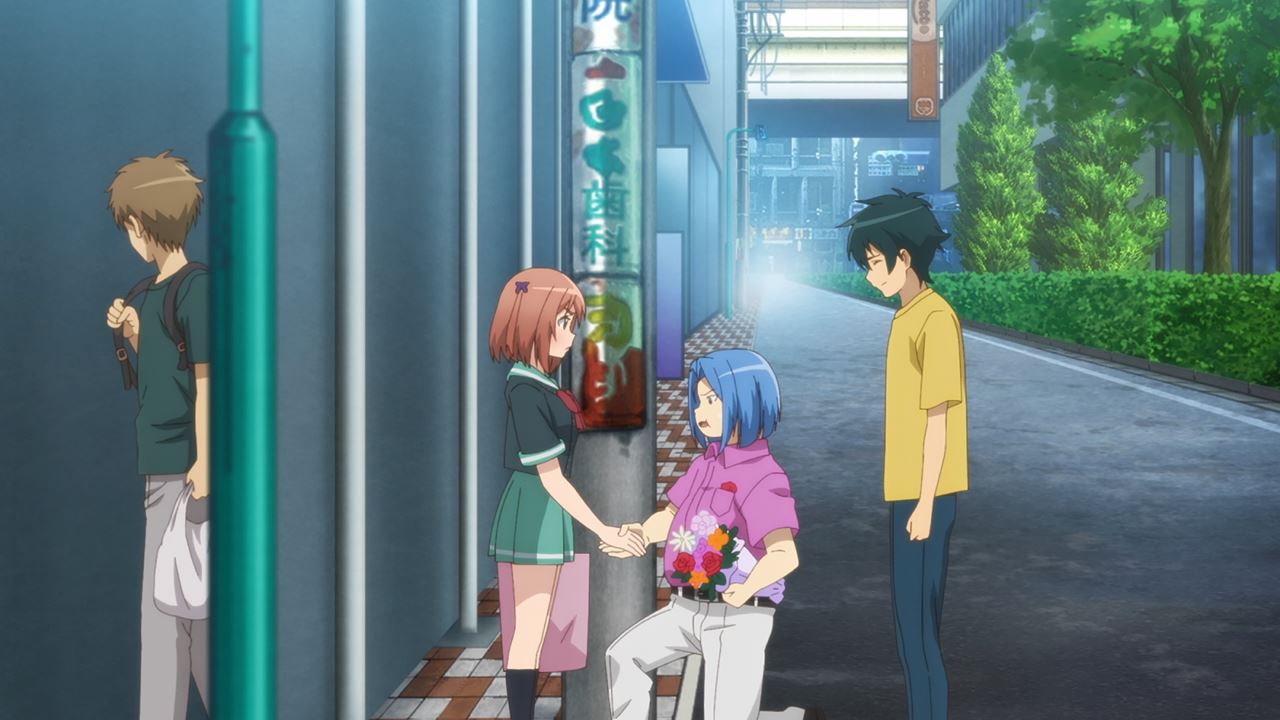 Meanwhile, here’s Sariel where he’s really sad that Gabriel abandoned him even after offering a bucket full of chicken to his fellow archangel.

Also, looks like he tries to hit on Chiho Sasaki but seriously, the reason why Gabriel left Sariel is because he’s freakin’ fat! 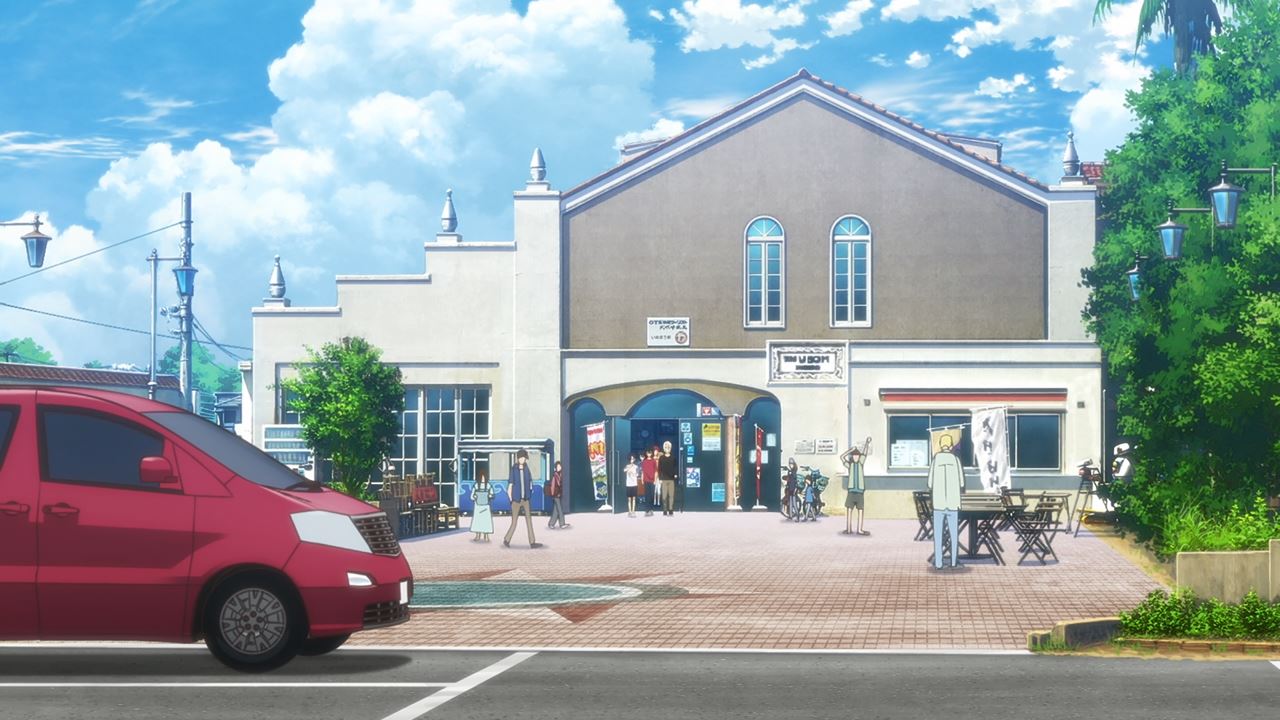 Now then, they finally arrived in Choshi where Satan, Alsiel, and Lucifer are gonna work at the beach shack until the Bon festival.

Really surprising that Satan dragged Lucifer into working part-time at the beach shack. I guess he won’t be sitting pretty in Choshi. 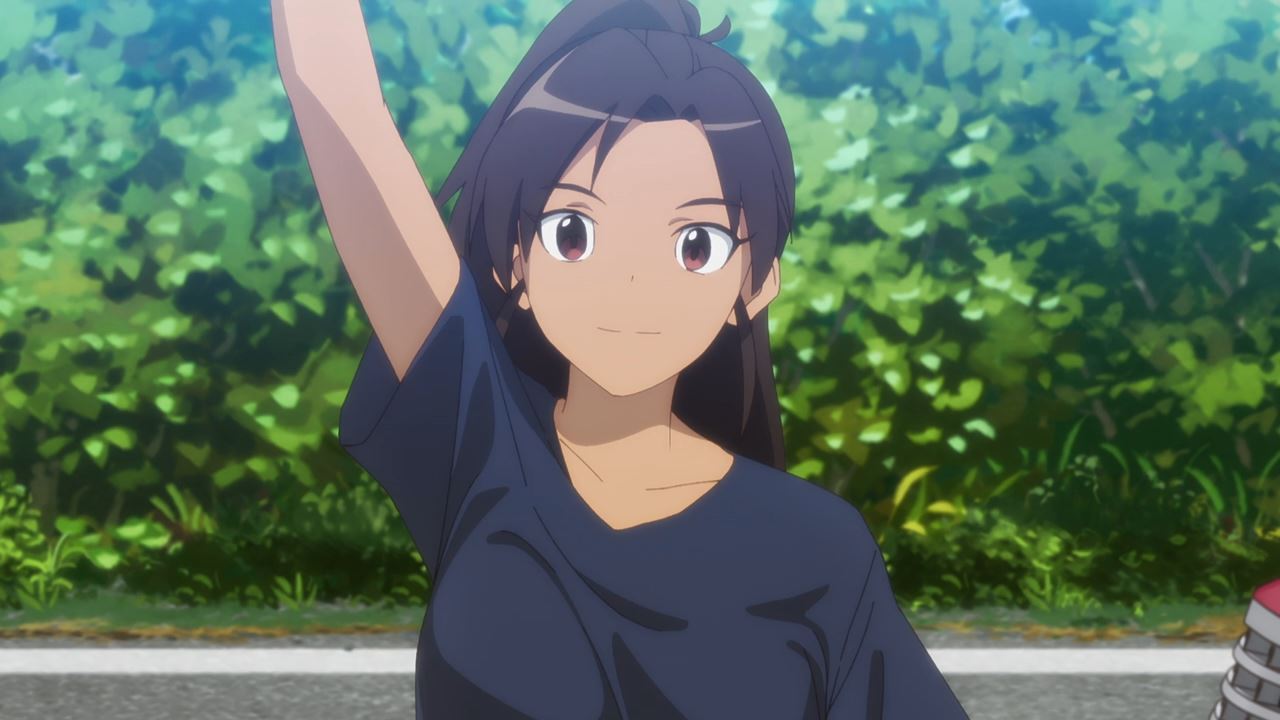 By the way, here’s Amane Ohguro where she welcome Sadao Maou and his party as she’s looking forward in working at the beach shack. Heck, she’ll pay 10,000 yen per day. 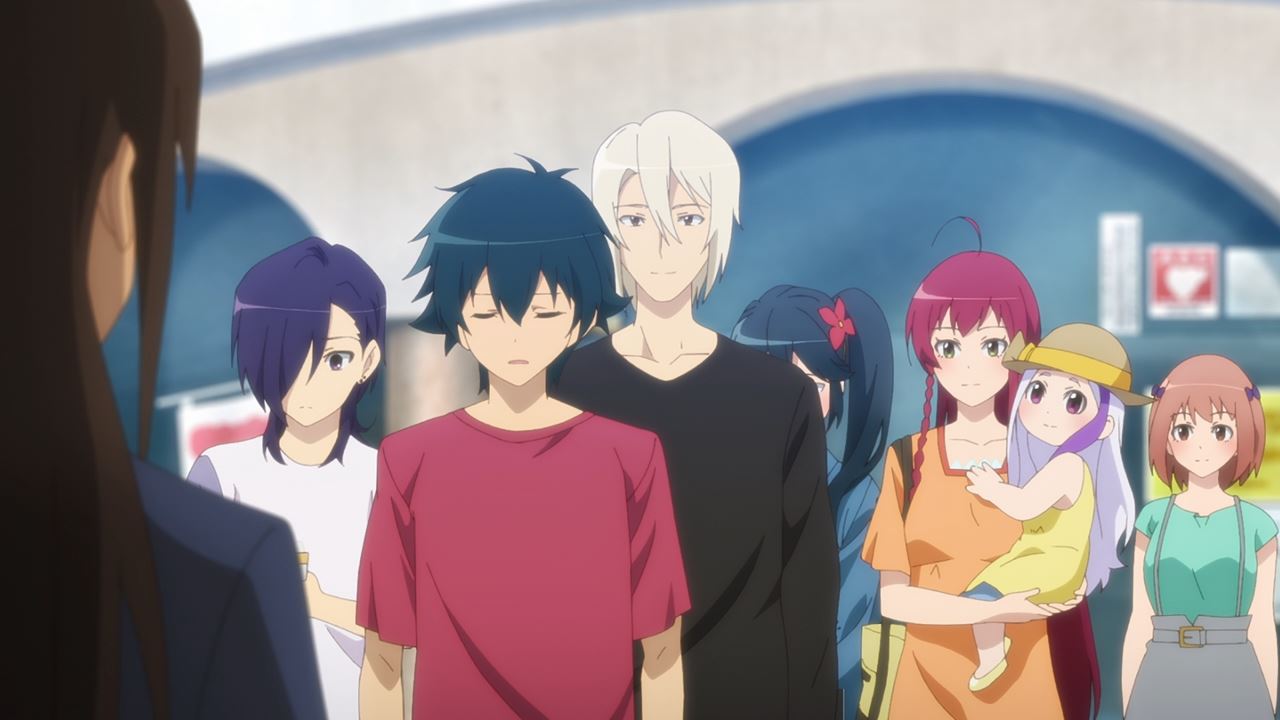 Oh yeah, I forgot to mention that Emi Yusa, Alas Ramus, Suzuno Kamazuki, and Chiho Sasaki tag along as they’re gonna stay in Choshi for 3 days and 2 nights.

Then again, Amane-san still sees Satan as a family man where she thinks that he brought his wife Emilia and his child Alas. Geez, you know that Maou-sama is still single who works at a burger restaurant. 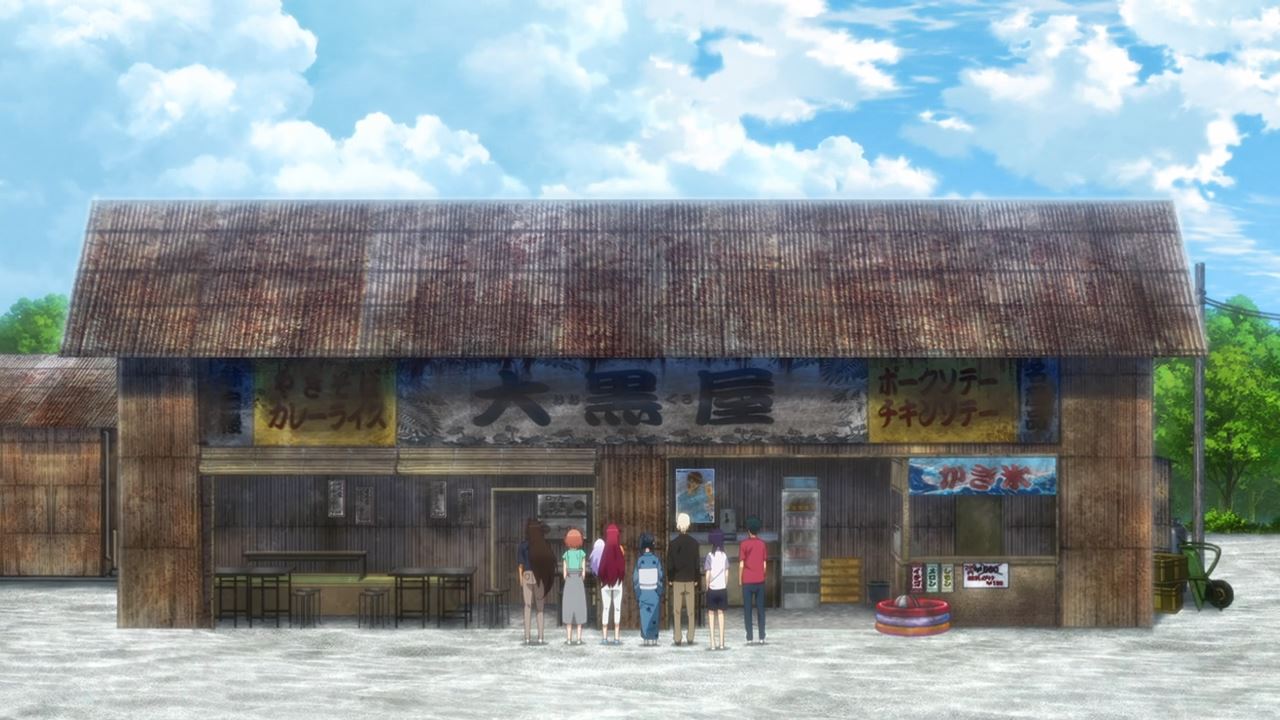 Anyways, they finally arrive at Ohguro’s Beach Hut where I have to say that the place has seen better days. Seems that Satan and his company won’t get a big paycheck at this point. 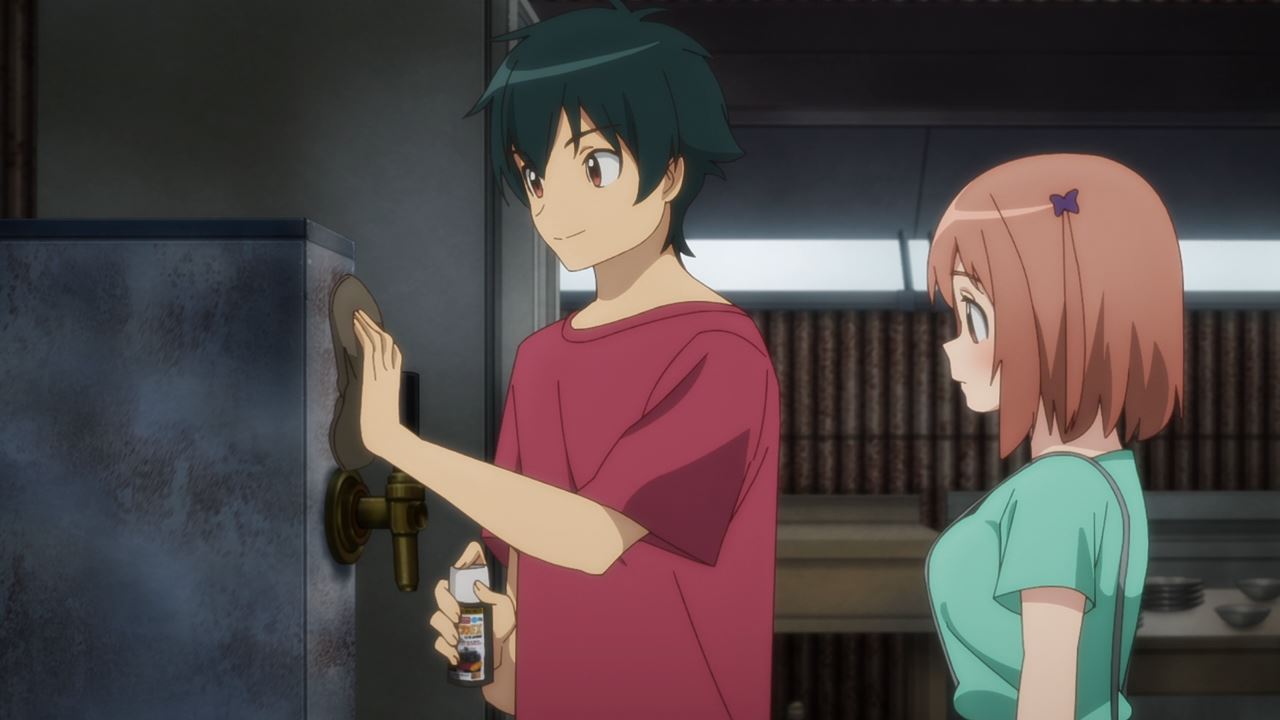 So, the only way to attract customers is to clean this beach shack up as Sadao Maou wasted no time in removing rust, fixing the seats, and stocking up some refreshments.

Gotta say that his experience working at a restaurant is pretty helpful as Satan wants this beach shack to be a successful establishment in Choshi. 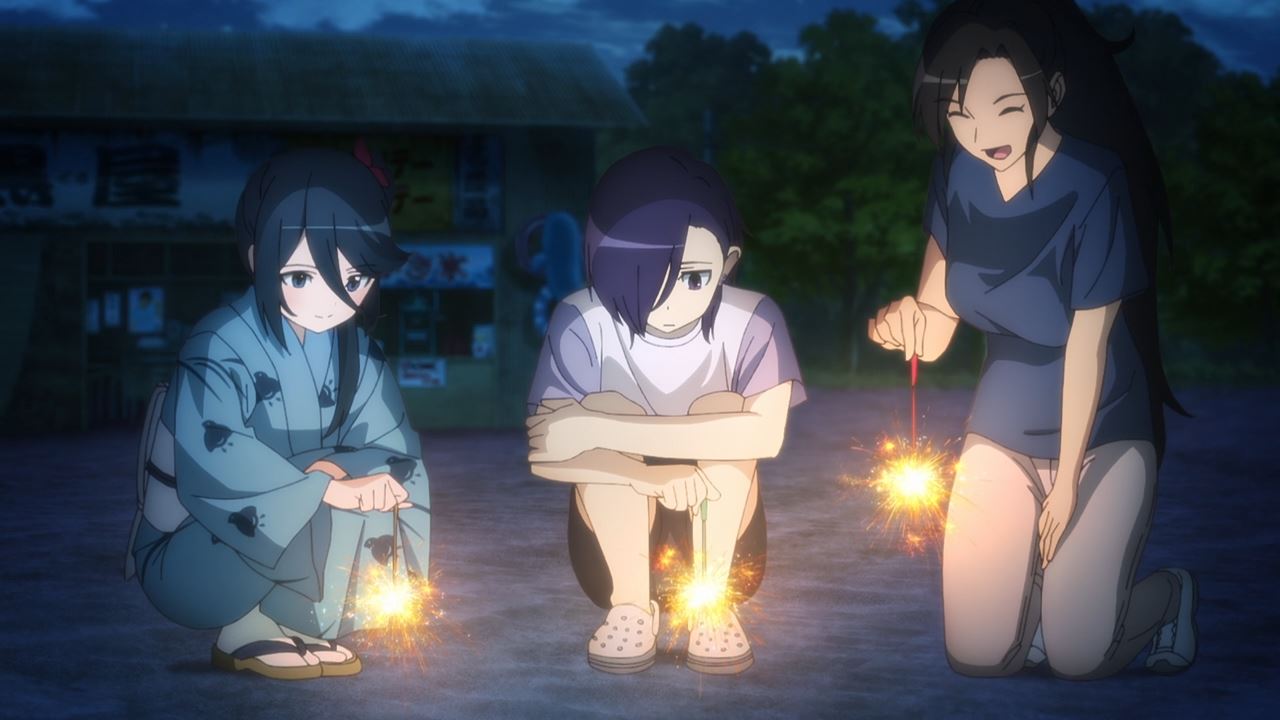 After cleaning the entire shack, it’s time for some fireworks where Sadao and his buddies are having fun before opening day. With that said, looks like Ohguro’s Beach Hut is ready to take some customers. 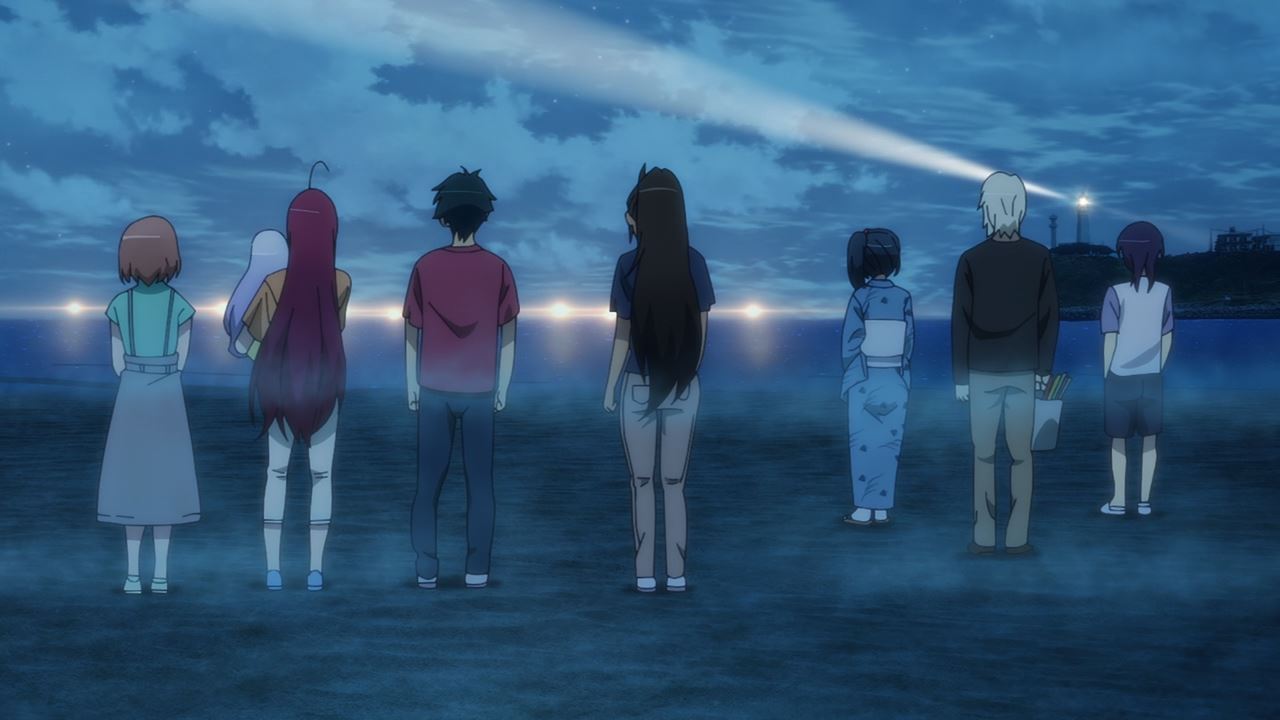 However, Amane-san told everybody that there’s a ghost problem where according to the legend of Mouren Yassa, the souls who drowned at sea have returned to the surface to drag innocent people into the afterlife.

Looks like Maou-sama and the rest will have to deal with spirits where it prevents customers from having a good time at the beach. 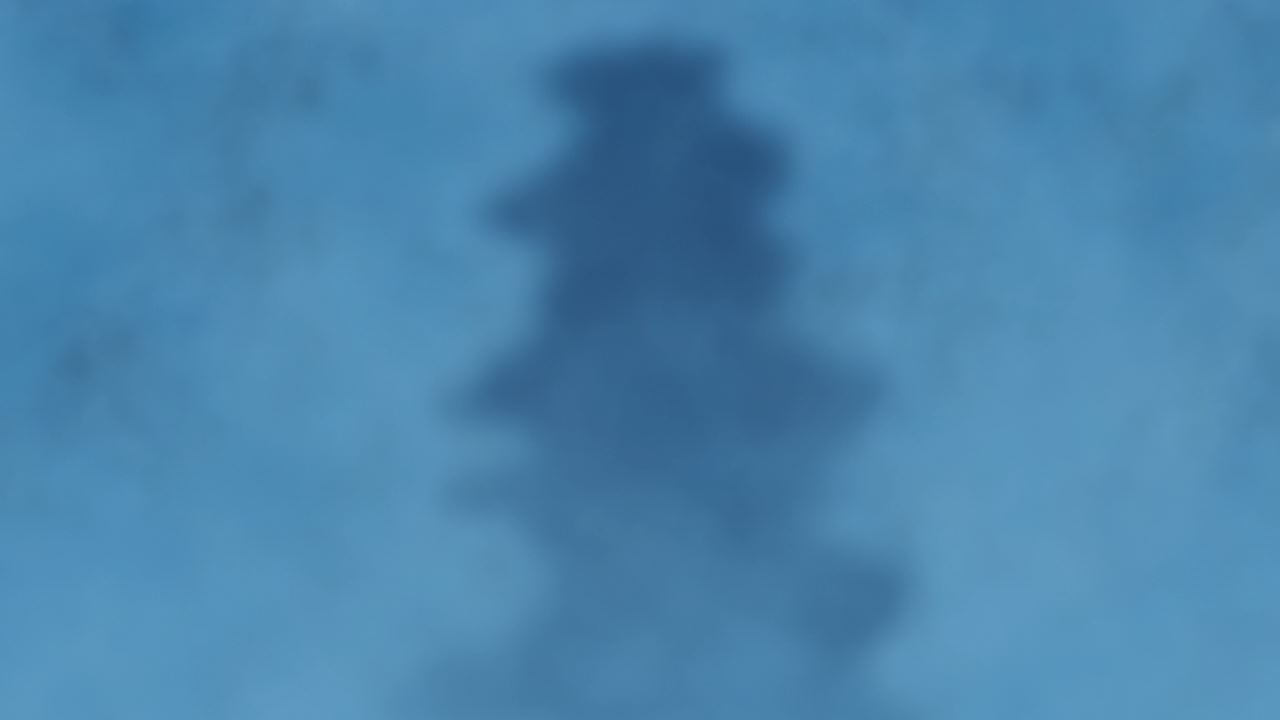 And seriously, I have a bad feeling that it’s gonna be a tough battle ahead on the next episode where departed souls are gonna drag the likes of Chiho Sasaki and Crestia Bell to their watery grave. Let’s hope that it won’t happen as I see you next time!