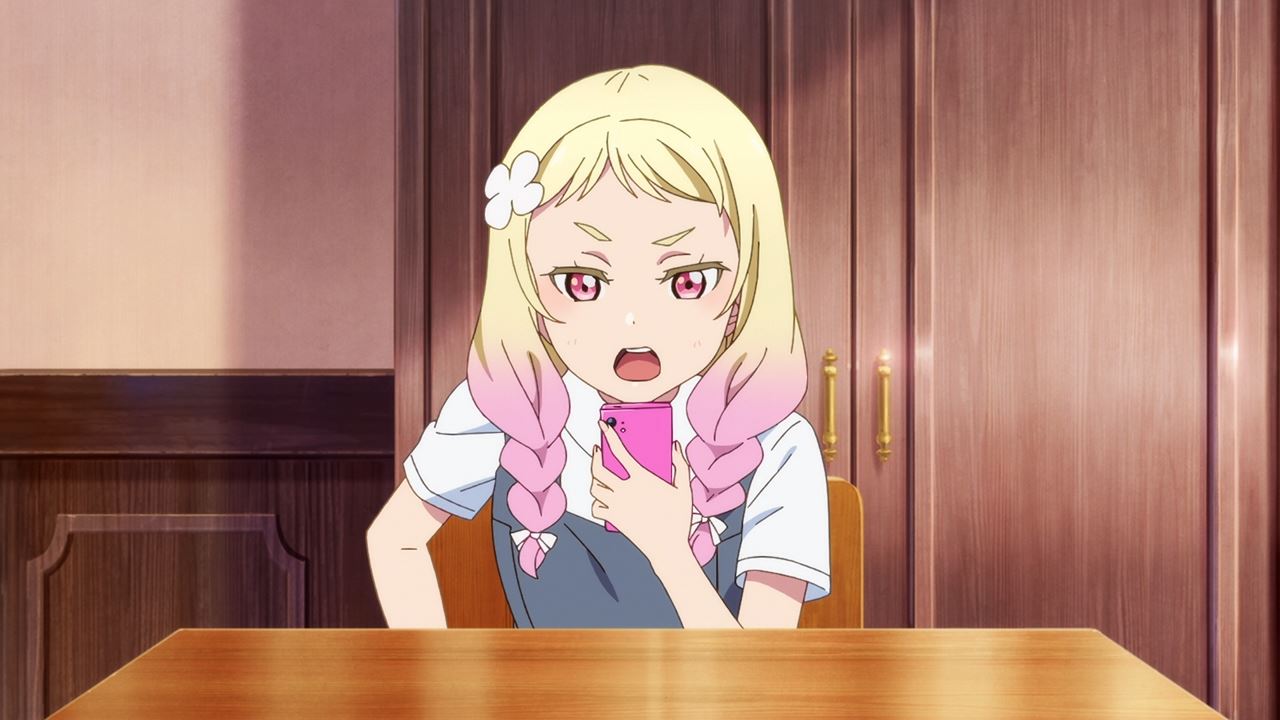 Let’s begin this episode with Natsumi Onitsuka or OniNatsu for short where she’s an L-tuber or what I call a live vlogger who takes various part-time jobs in order to make more money.

But despite working various jobs to gain money, OniNatsu is struggling where her video channel is not getting more views. Coupled with back pains for taking strenuous work, Natsumi Onitsuka might end up in the red if she can’t do something. 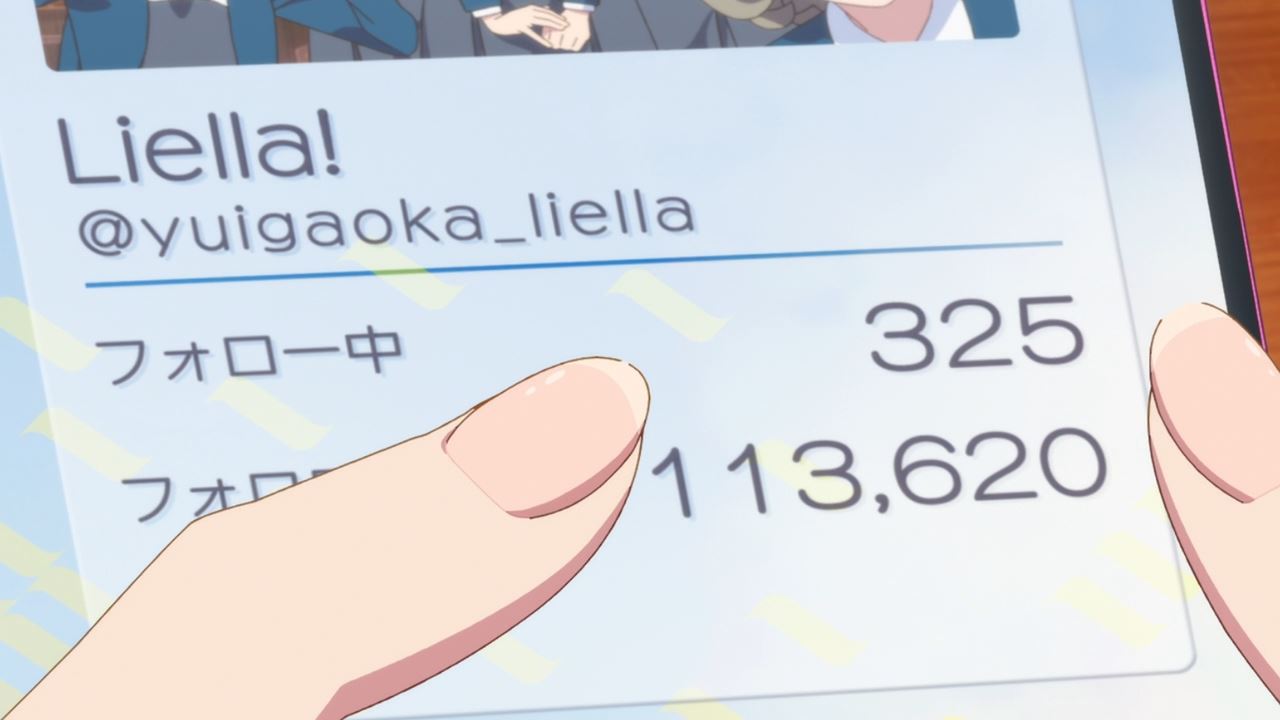 That’s until she encountered Liella where Yuigaoka Girls’ Academy’s school idol club is getting more fans. 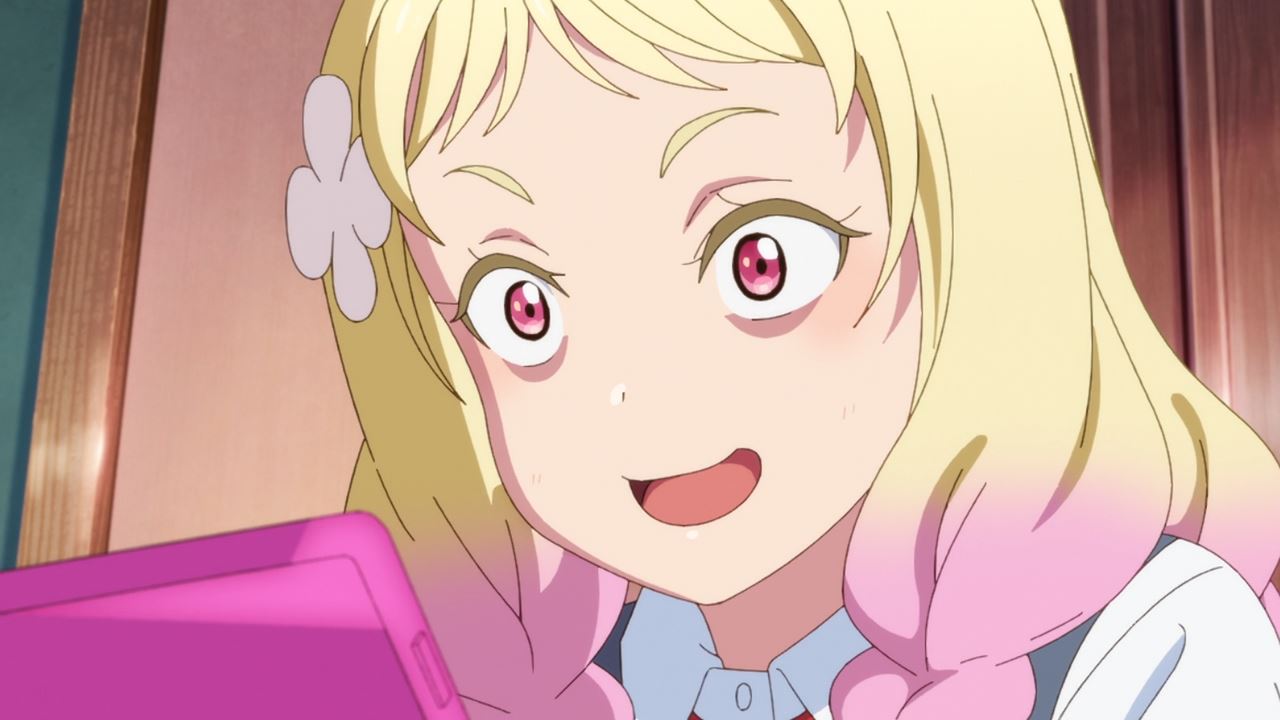 Thus, OniNatsu came up with a devious plan of using their popularity to boost more views in her channel, raking in more money that she ever hope for.

From all these years watching Love Live! shows, this character is the epitome of being the gremlin of the bunch. I mean, Natsumi only cares about the money and nothing else! 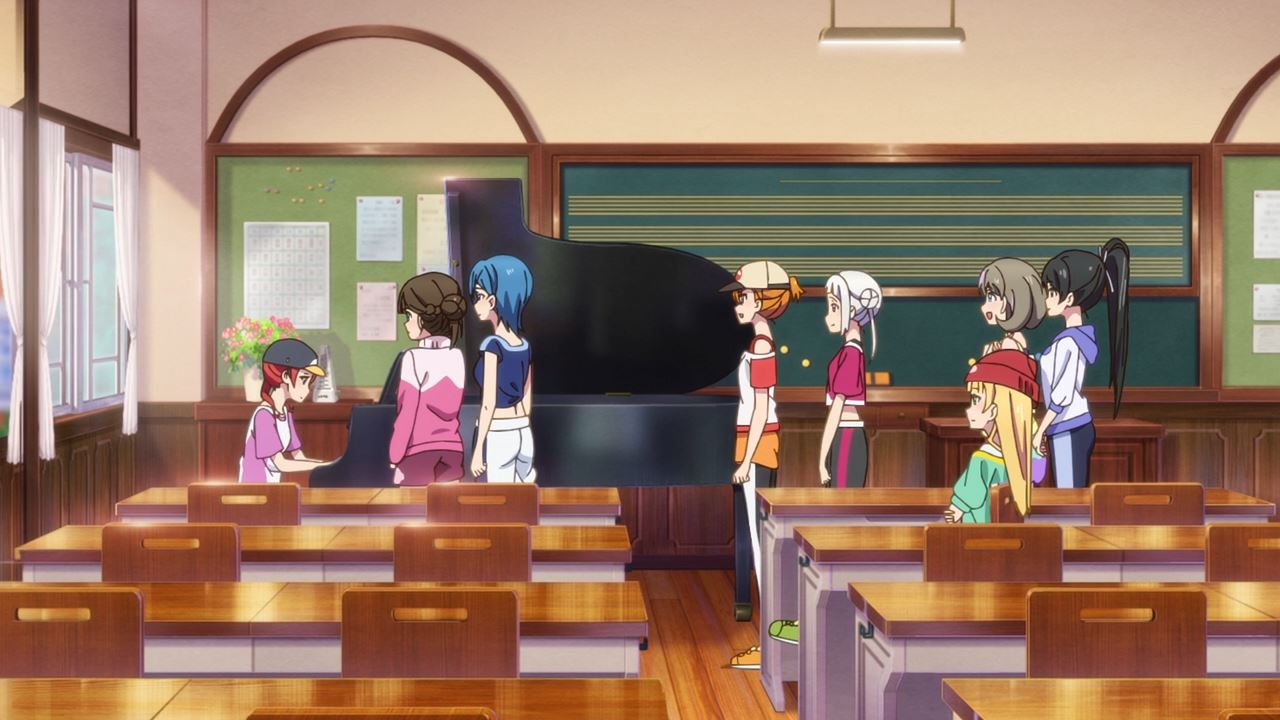 Meanwhile, let’s move onto Mei Yoneme where despite having a scary face and being an idol fan herself, Mei is quite talented where she plays the piano.

Of course, Yoneme claims that her piano skills is not that great compared to Ren Hazuki. But hey, glad that Mei has some talent where she might compose some songs later down the line. 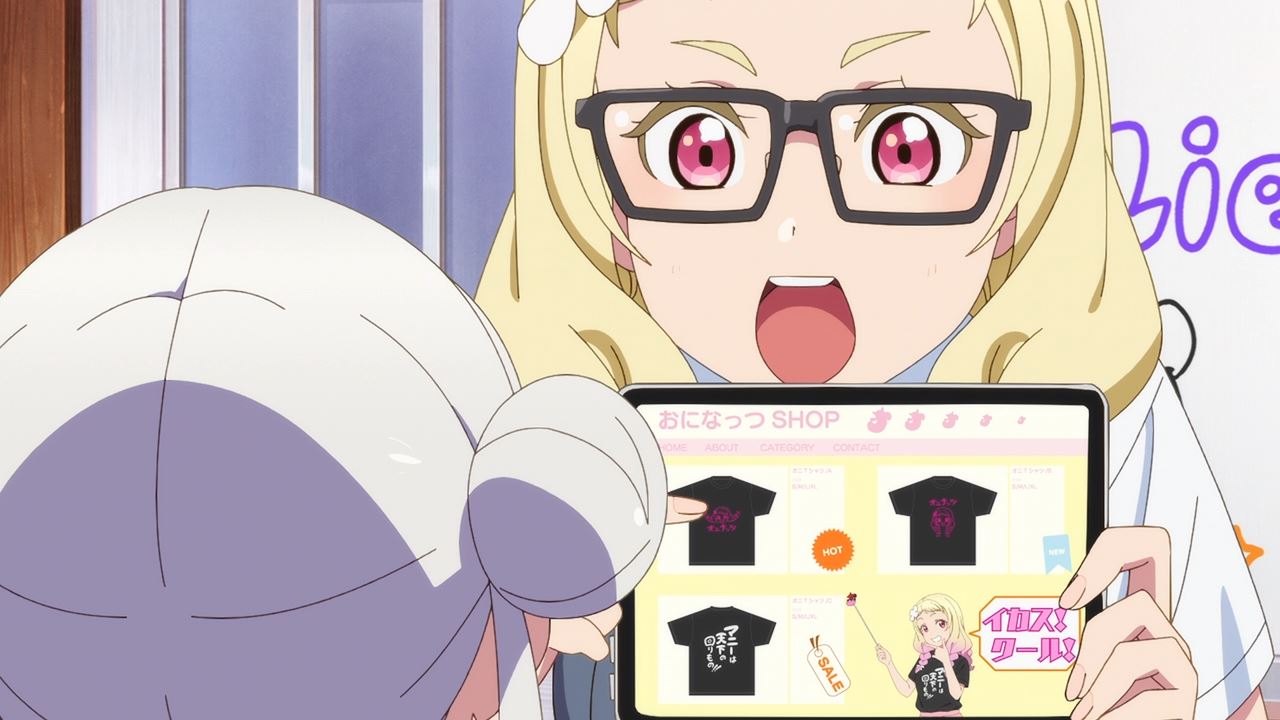 Now then, here’s Natsumi Onitsuka where she introduce herself as the producer, complete with her business card and her portfolio of various merchandise made specifically for Liella. 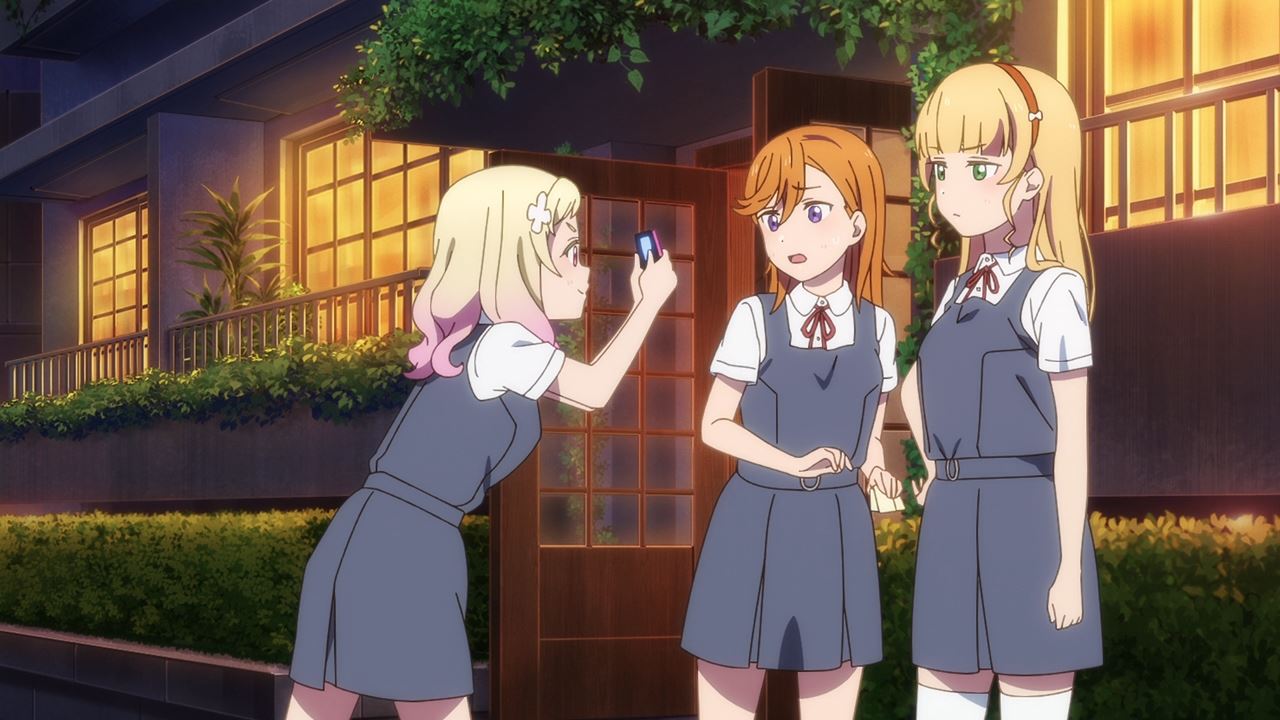 Heck, she can record their activities live too. Then again, I have some doubts regarding OniNatsu’s abilities as a producer as she’s just riding the Liella wave of popularity. 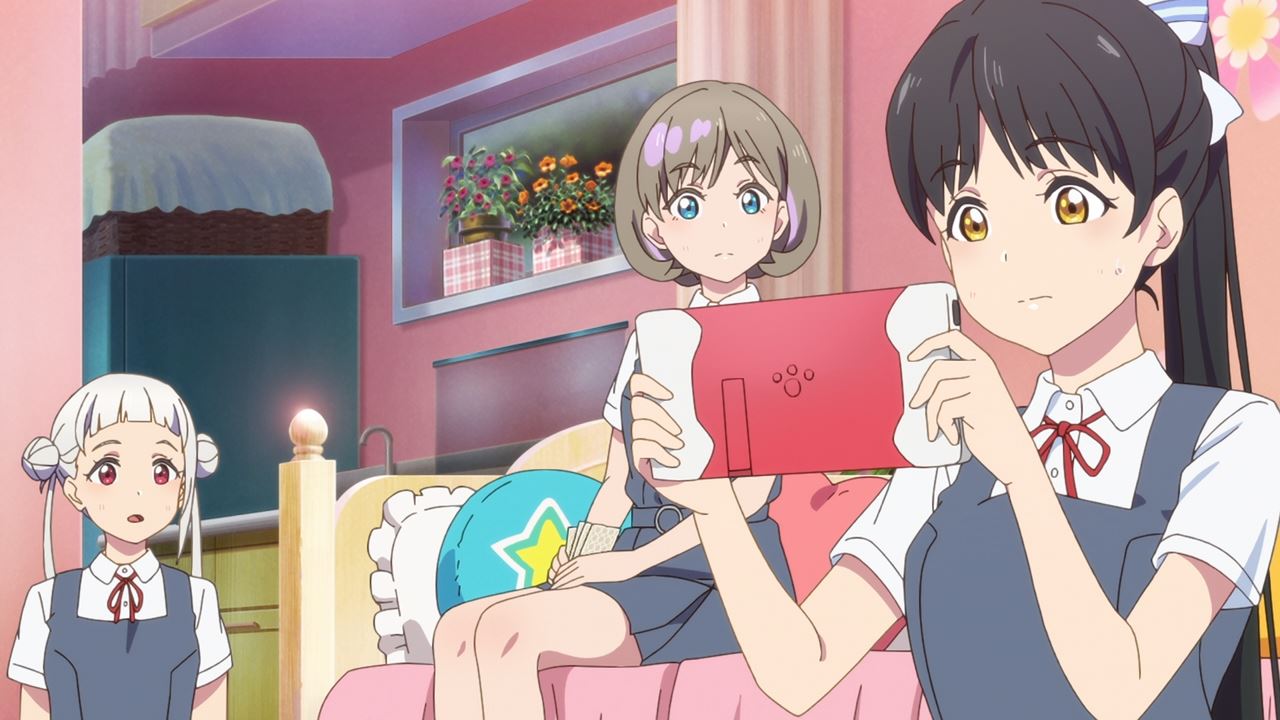 By the way, it appears that it’s Ren’s first time holding a modern game console where she’s really astonished by it.

Oh yeah, I forgot to tell you that Keke Tang owned that game console, yet I’m still puzzled if she’ll go back to China or not. 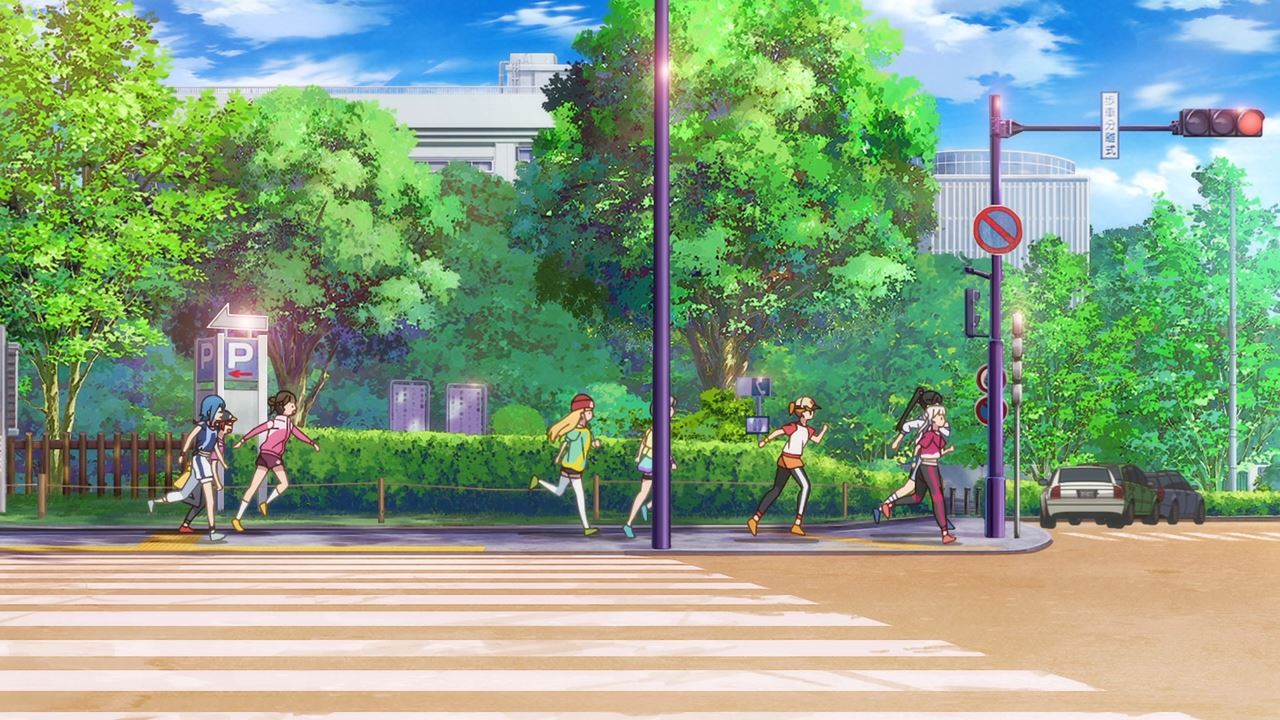 Anyways, it’s time for Liella to do some exercise starting with a morning jog across Shibuya. But wait a minute, where’s Natsumi Onitsuka? 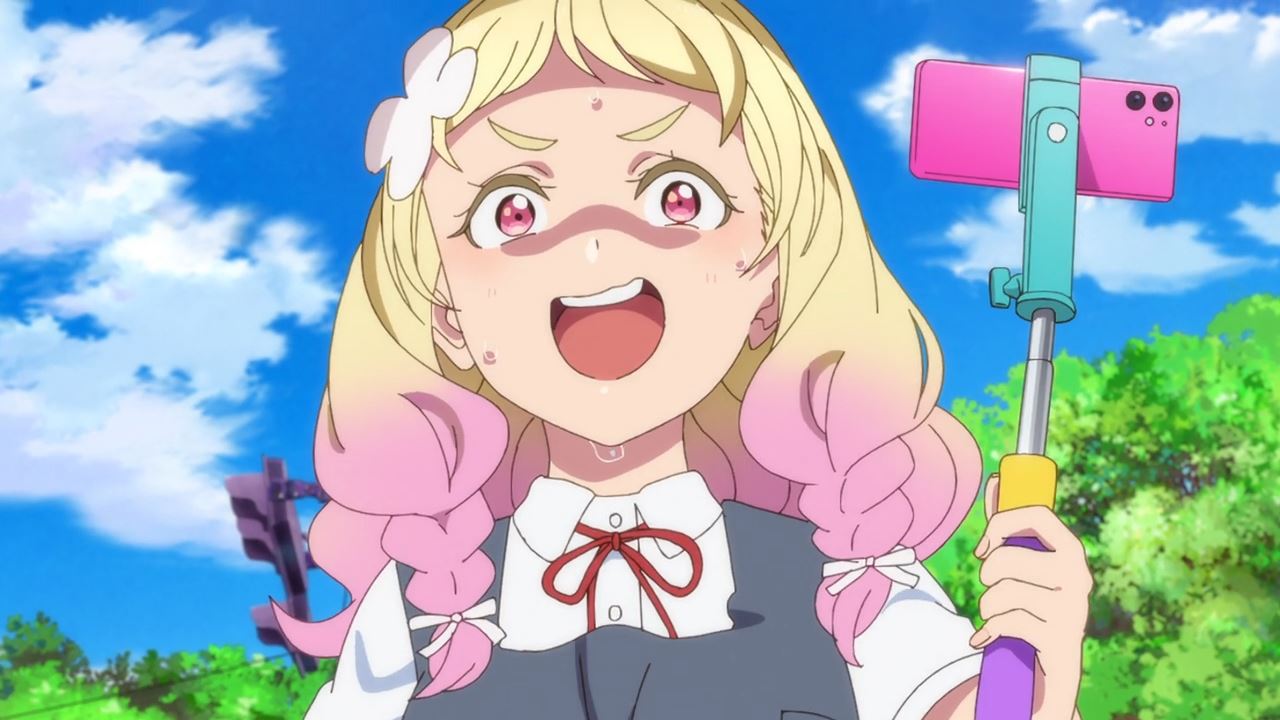 Oh, she’s lagging behind as OniNatsu doesn’t have the stamina despite working day and night to earn some cash. I guess it’s time to take Keke’s training regimen. 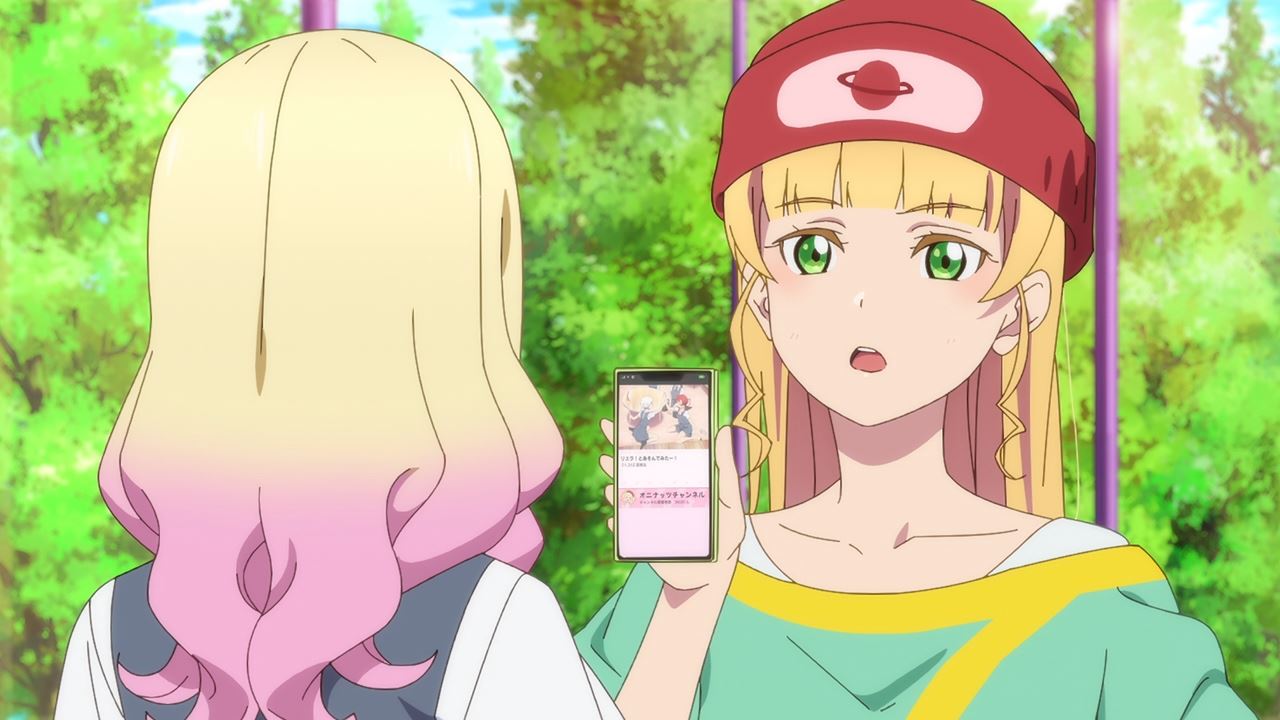 Now then, it appears that the rest of the school idol club are getting suspicious towards OniNatsu where Sumire Heanna look at her profile to find out that she’s making a profit out of Liella’s popularity. 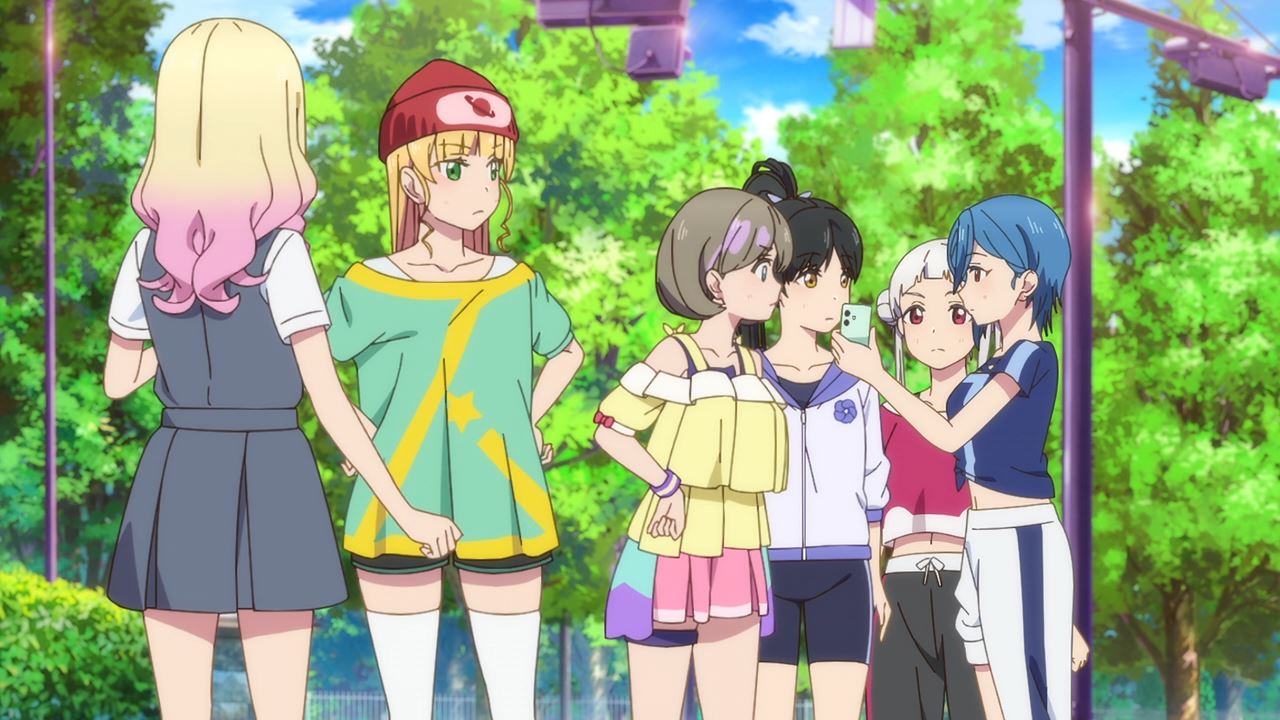 Even Shiki Wakana calculated that OniNatsu is earning much money thanks to the views from her video channel. C’mon Natsumi Onitsuka, you have to give some of your earnings to the school idol club. 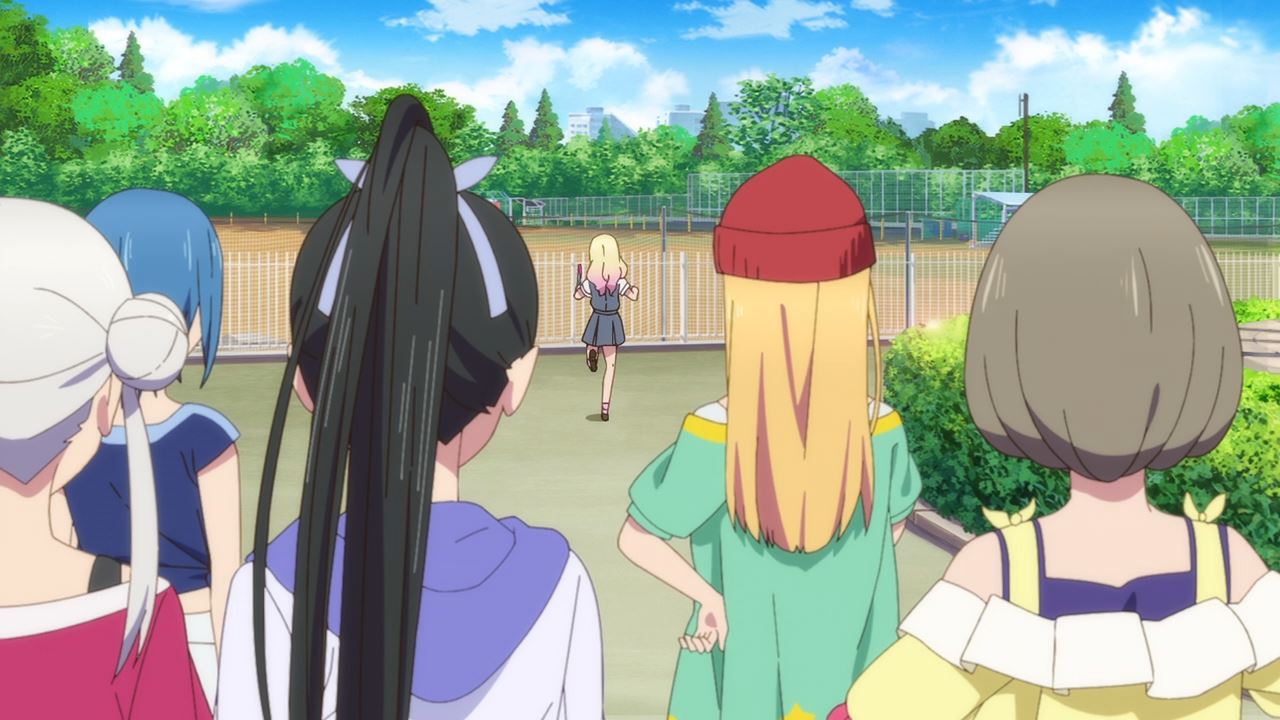 Unfortunately, OniNatsu won’t do that as she runs away, although I’ll say that she’ll return because Natsumi can’t let her golden goose go that easily. 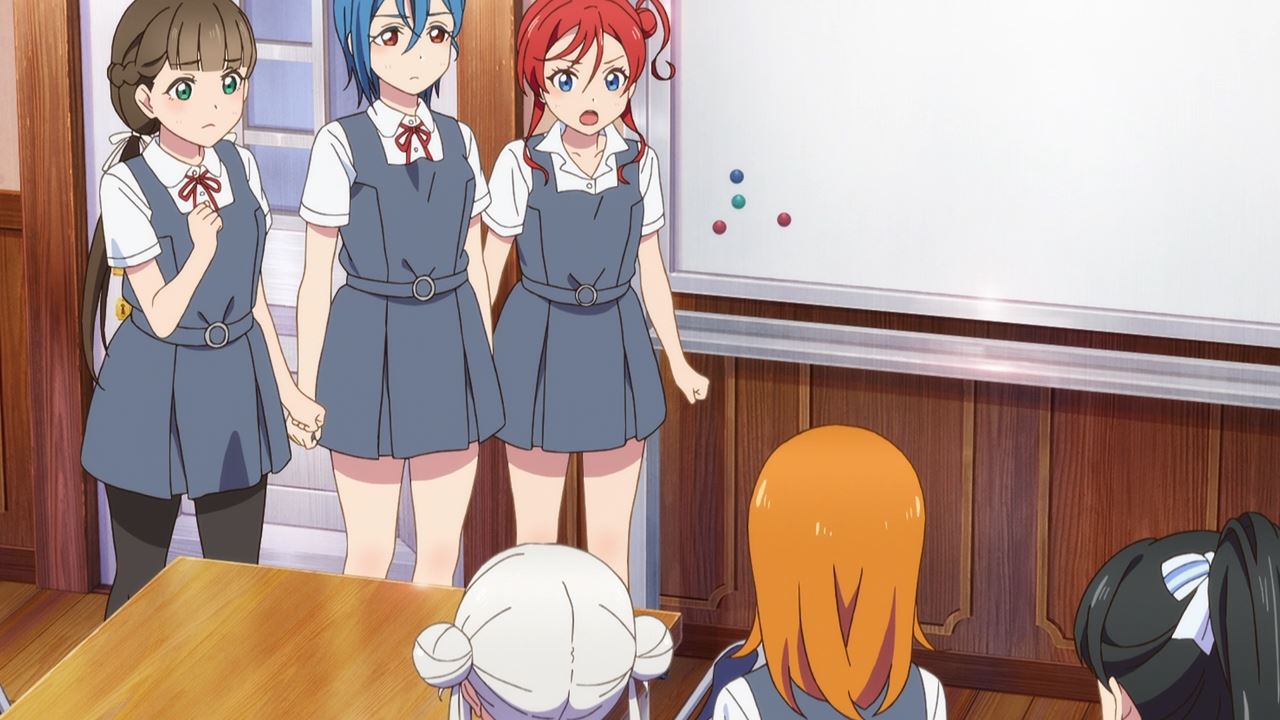 One last thing, it appears that the 1st year members have decided to hold their own training camp as Kinako Sakurakoji and the rest are worried that the skill gap between them and the seniors is quite big.

Okay, I think you should join Kanon Shibuya and the rest in their training camp as it builds camaraderie in addition to both dancing and singing skills. Then again, I have a feeling that OniNatsu convinced Kinako, Mei, and Shiki to hold their own training camp. 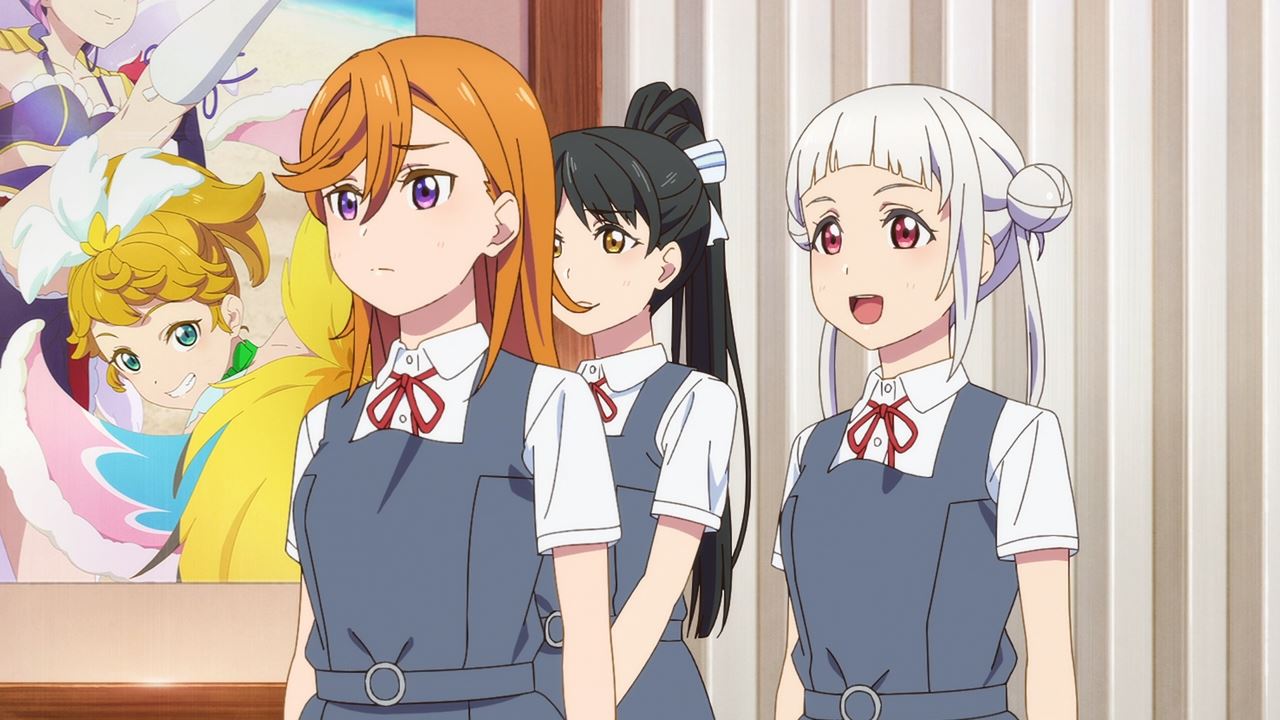 Sadly, it looks like Chisato Arashi approved their decision. Honestly, the school idol club should have unity between 1st and 2nd year students as they can’t go to their separate ways.

Also, OniNatsu should stop leeching off Liella’s popularity through her vlogs and instead become a school idol. I mean, she can become a great asset if Natsumi doesn’t act like a greedy gremlin. Anyways, I’ll see you next time!