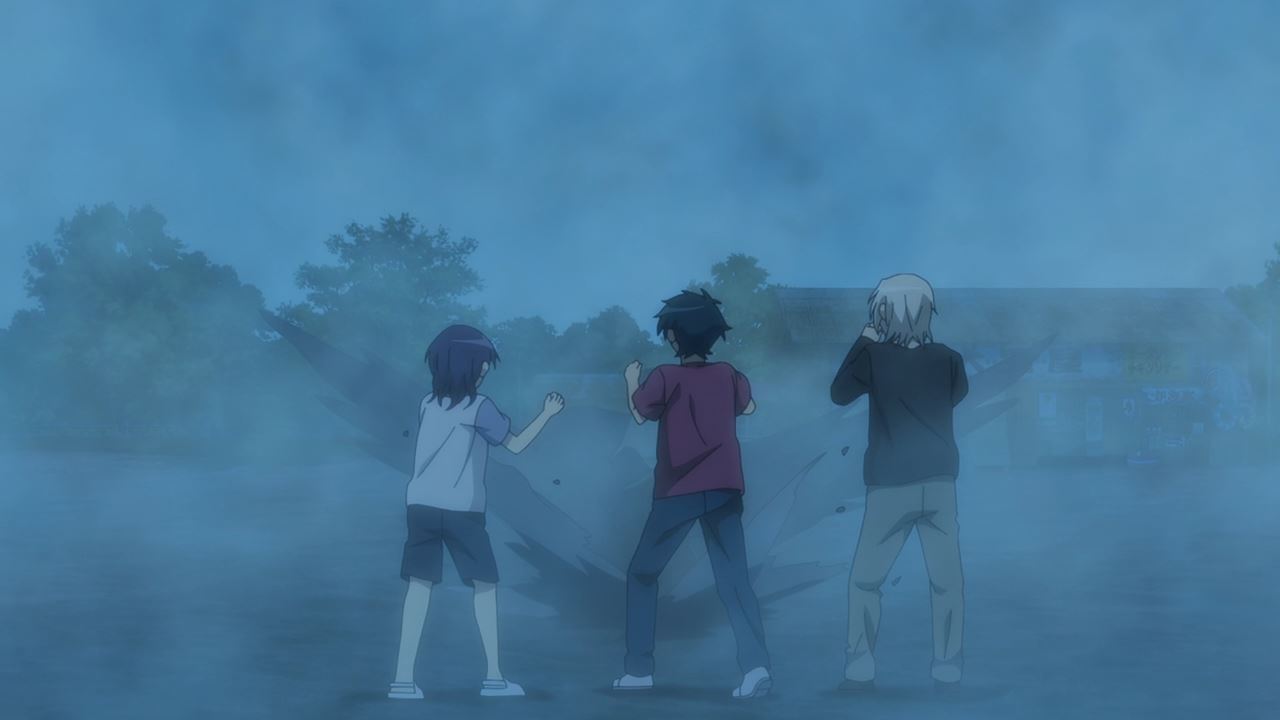 Well everyone, the day has finally arrived as the legend of Mouren Yassa has come true. In fact, the departed souls are here to drag Sadao Maou and the rest to the River Styx, but they won’t go to the afterlife without a fight.

Anyways, Maou-sama and the rest will deal their first enemy at Choshi… 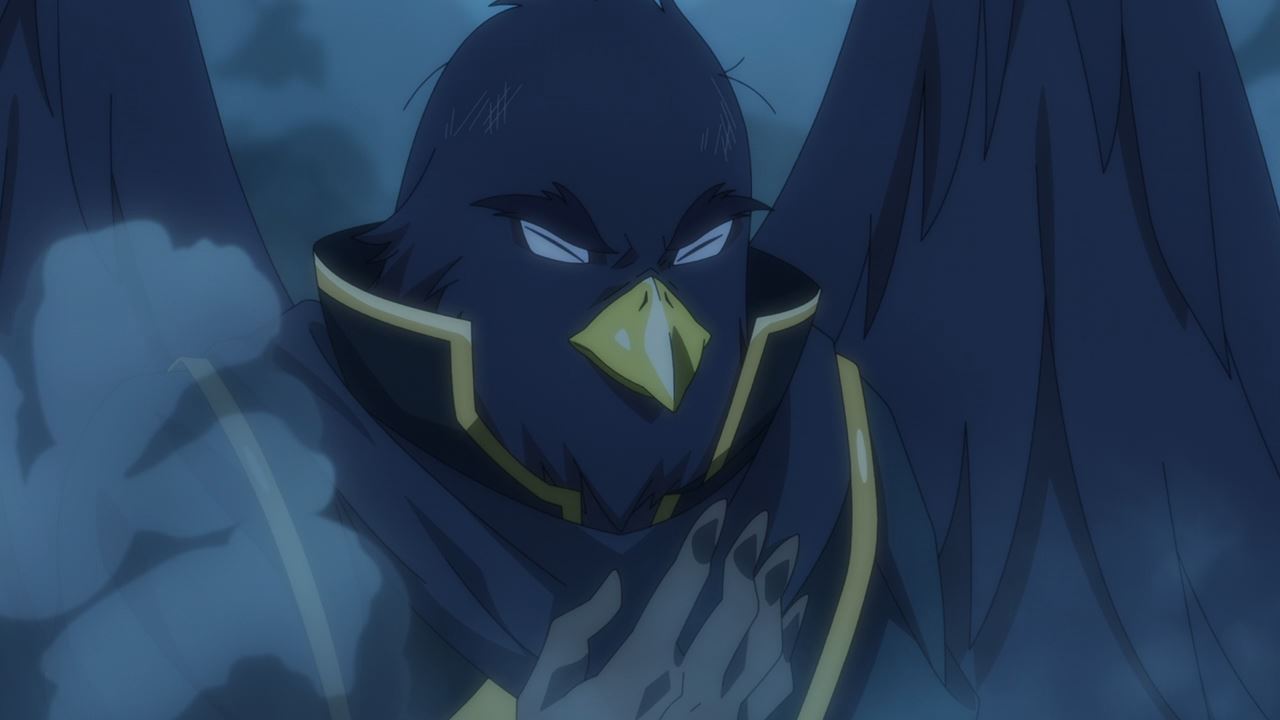 …which turned out to be a birdman named Camio. Okay, looks like it wasn’t a ghoul that Amane Ohguro talked about.

On the other hand, Sadao Maou (or Satan) recognized Camio where he’s one of his top advisors during his reign as the demon lord at Ente Isla. Of course, Satan wants to know why Camio went to Earth? 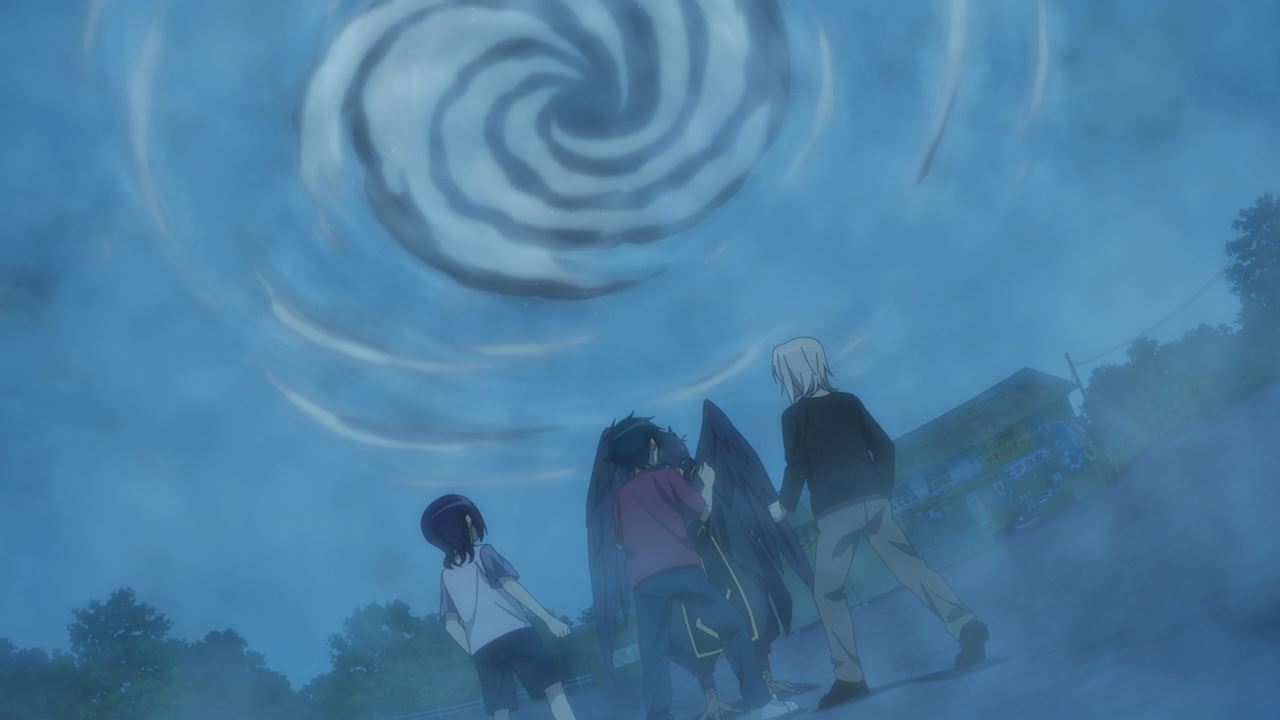 Unfortunately, it appears that Satan and his allies will have to protect Camio as they saw a nasty tornado coming towards them. 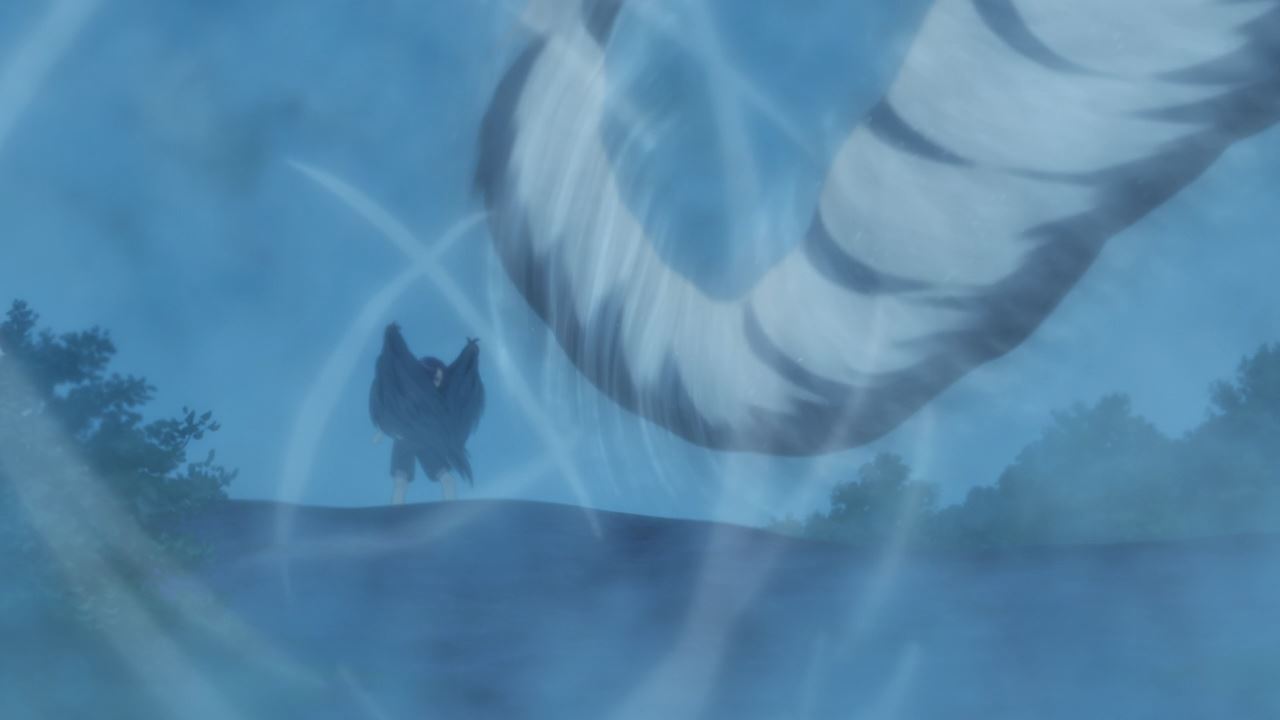 Luckily, there’s Lucifer (or Hanzo Urushihara) where he used his fallen angel wings to deflect the tornado away.

But seriously, their first day at Choshi is filled with danger as I’m worried that Chiho Sasaki and the rest are in danger. 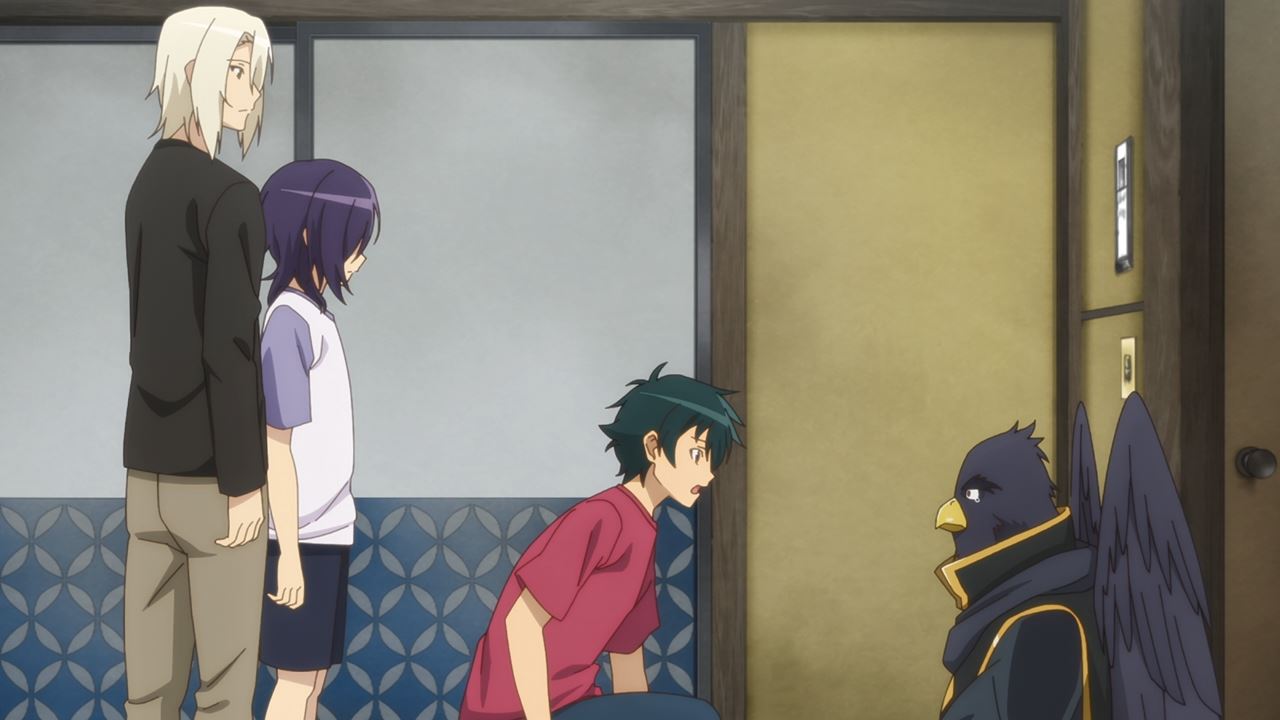 Now then, it’s time for Satan to ask some questions to Camio, like how did he came to Earth and why the advisor is being attacked by a tornado.

C’mon, this ain’t an ordinary part-time job at a small town in Chiba Prefecture, all thanks to an ancient legend who drags people to the afterlife. 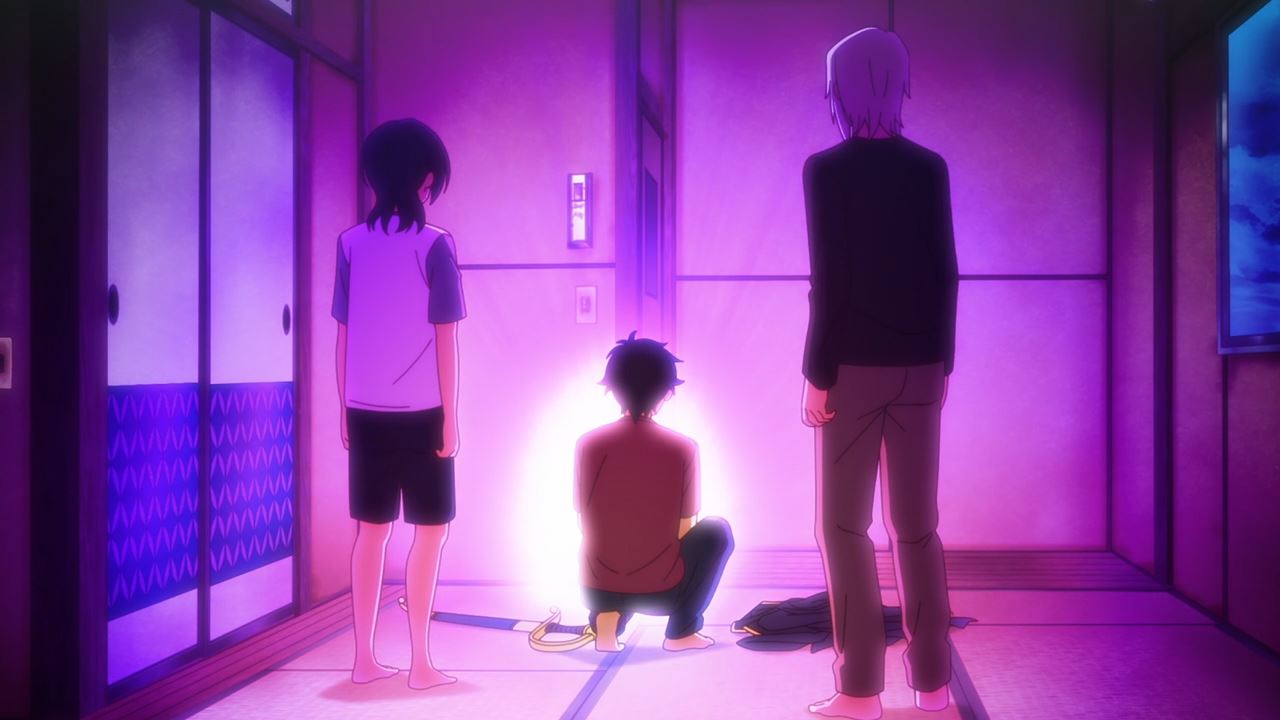 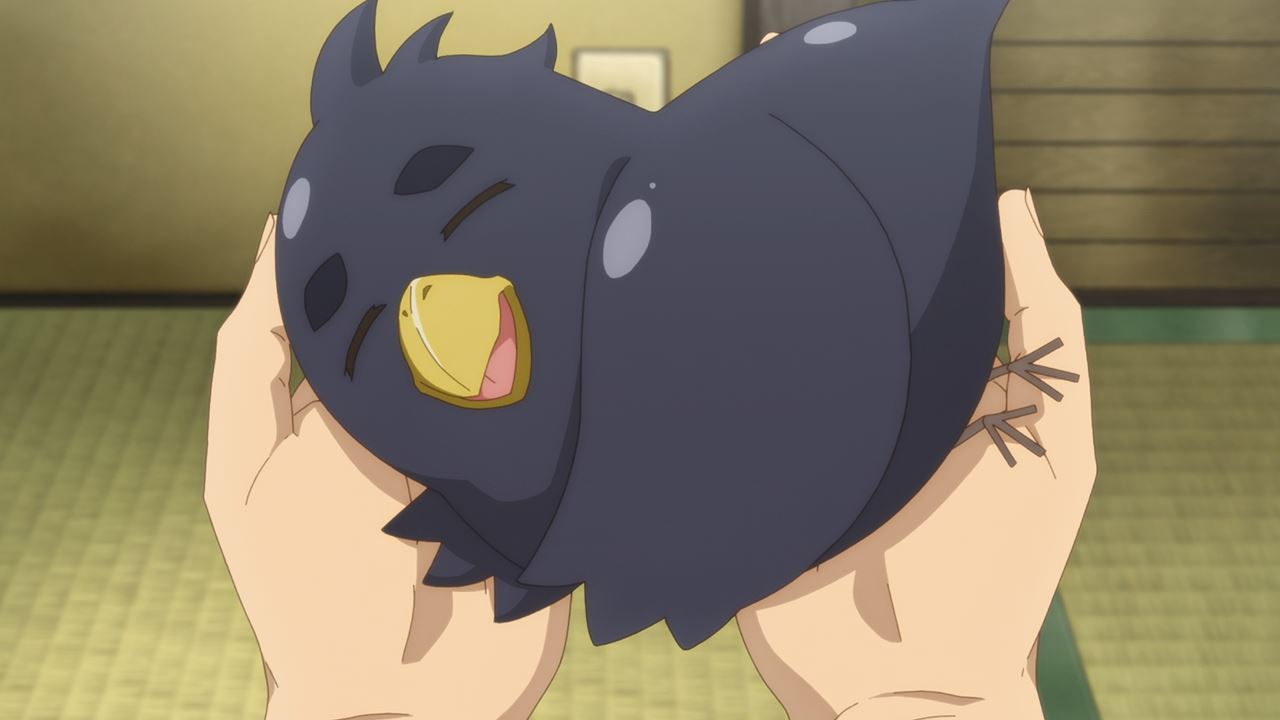 Sadly, it looks like Camio’s body is pretty weak as he transformed into a small bird. Now while Satan’s advisor is still alive, it sucks that he’ll have to wait for another time until Camio recovers. 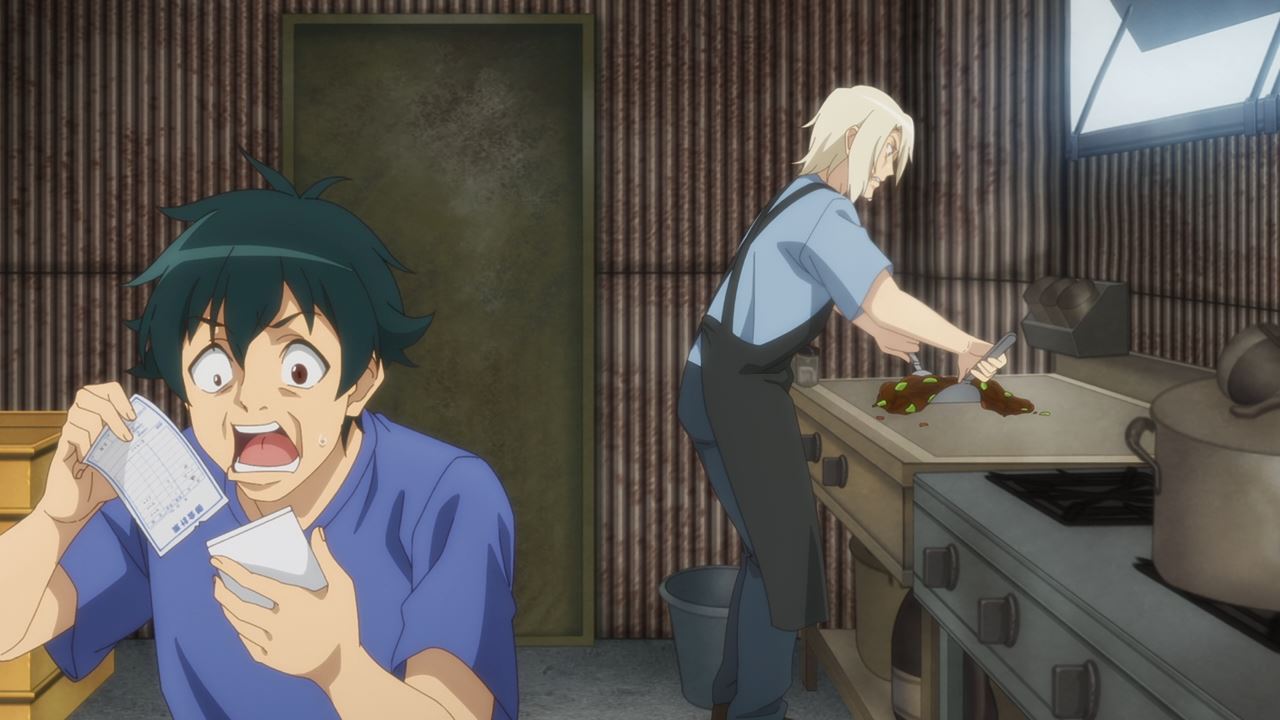 For now, it’s time for Satan or Sadao Maou to work at Ohguro’s Beach Hut where despite being renovated, they’re understaffed. 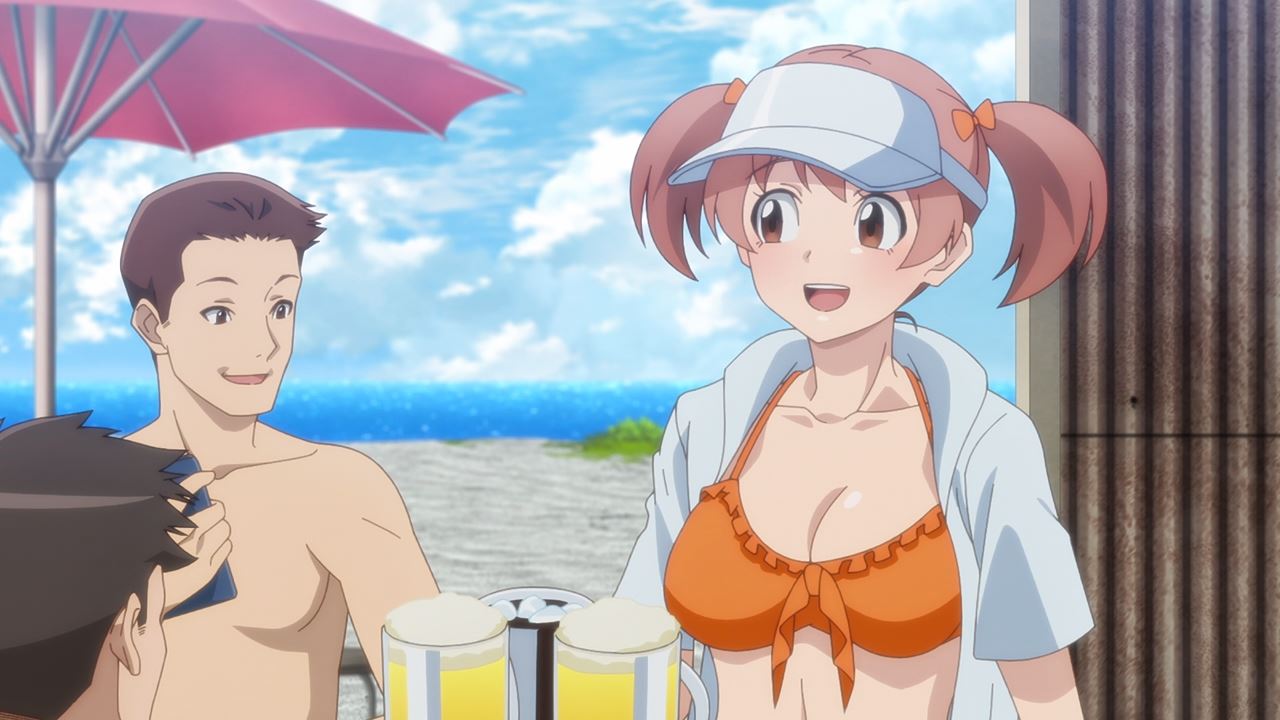 Sure that they’re having a vacation right now, but it’s nice that Chi-chan and the girls lend them a hand so that the beach shack won’t get swamped by angry customers. 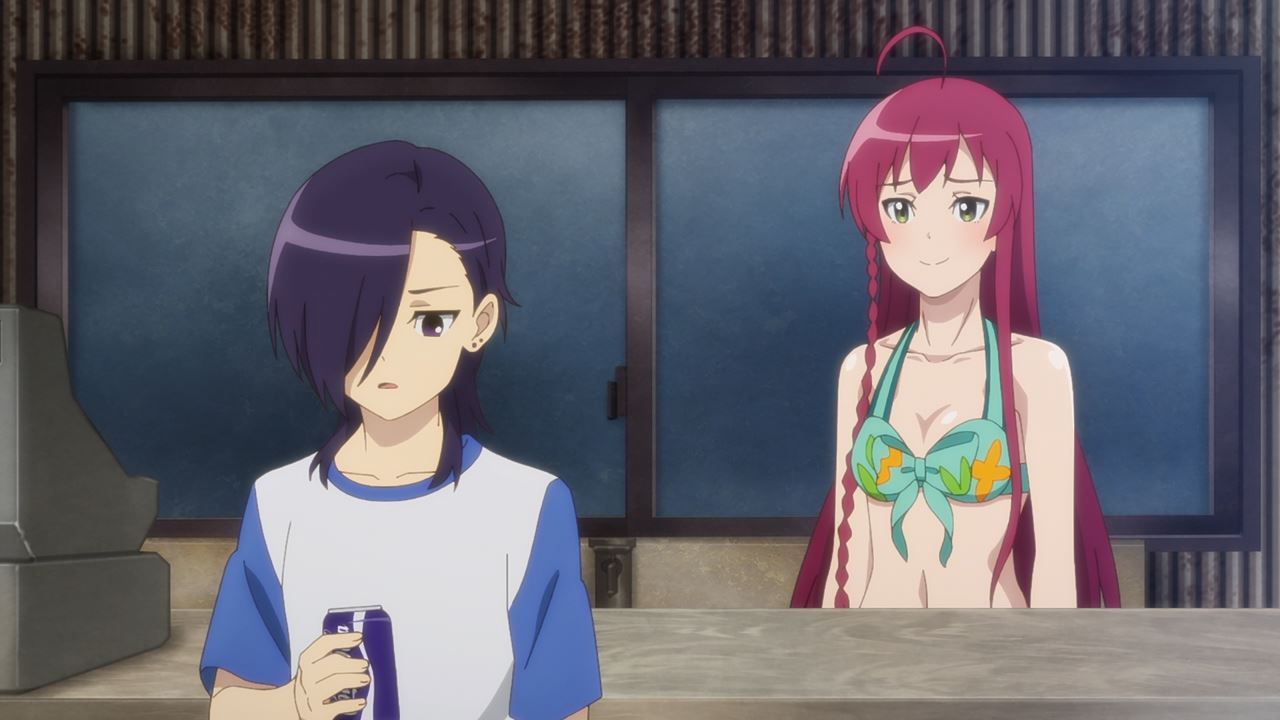 By the way, here’s Lucifer where he told Emilia about the time he joined forces with Olba Mayer. Then again, I have to admit that I couldn’t remember that treacherous priest very much.

Anyways, the reason why Lucifer joined forces with Olba so he can send the fallen angel back to heaven, although it appears that the priest wanted to become an angel himself should he crush the entire demon army on his own. Of course, it didn’t happen because Lucifer gave Olba a nasty uppercut back in Season 1.

With that said, Lucifer warned the hero that Olba Mayer might break out of prison and take the shards of Yesod by himself. This includes Alas Ramus where she currently serves as Emilia’s sacred sword. 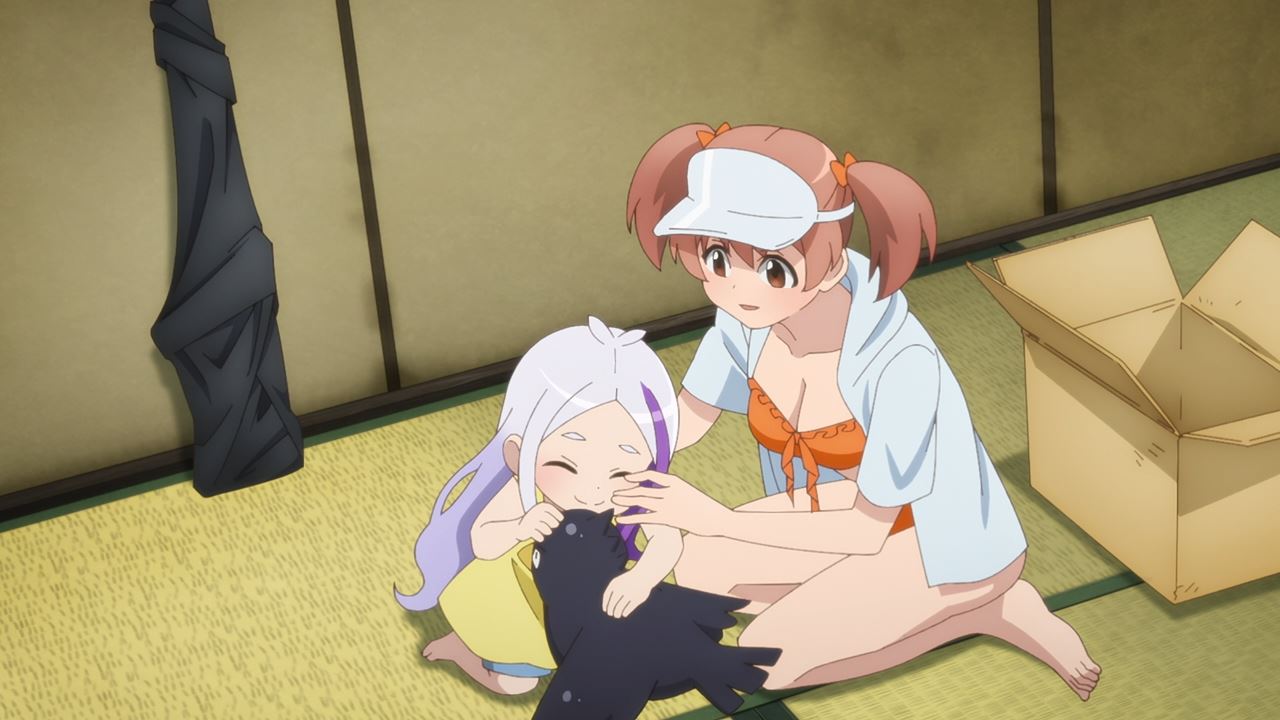 And speaking of Alas Ramus, looks like she’s having fun playing with Camio where he’s still stuck in his bird form. But hey, at least he’s recovering from his injuries from last night. 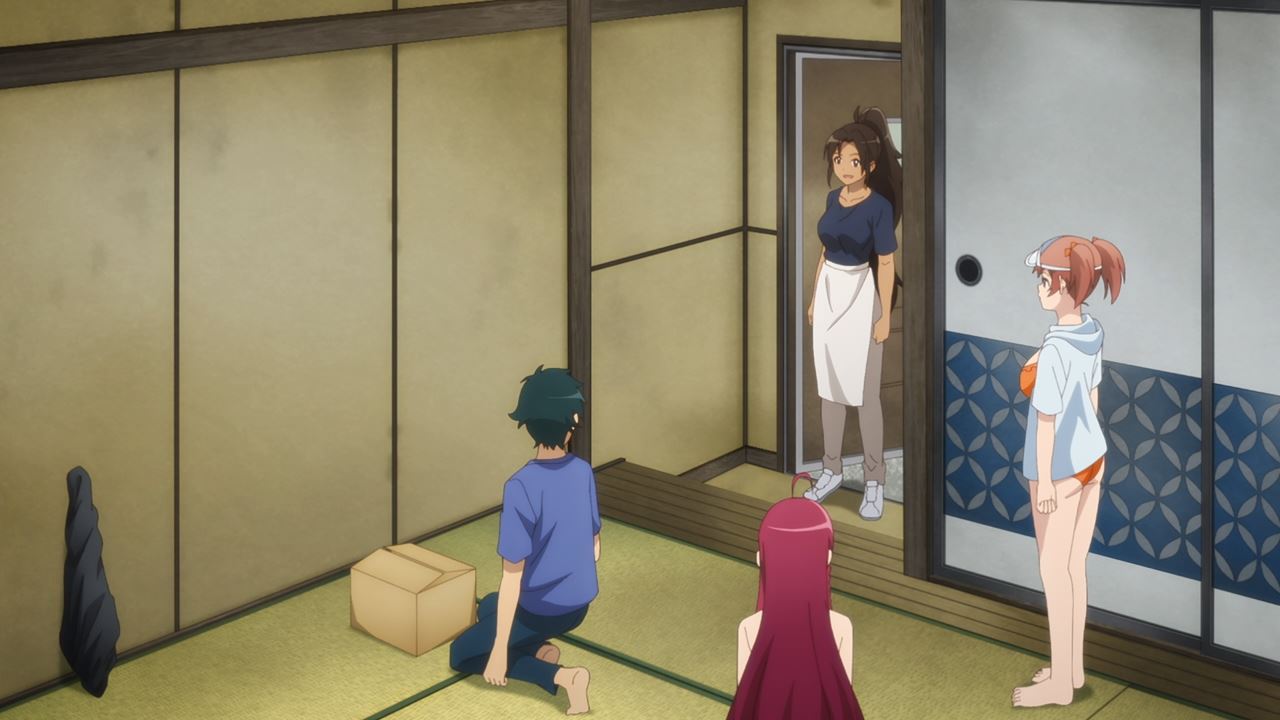 Meanwhile, here’s Amane Ohguro where she asked Sadao Maou to clean up the beach hut now that the rush is over. C’mon, it’s closing time after all! 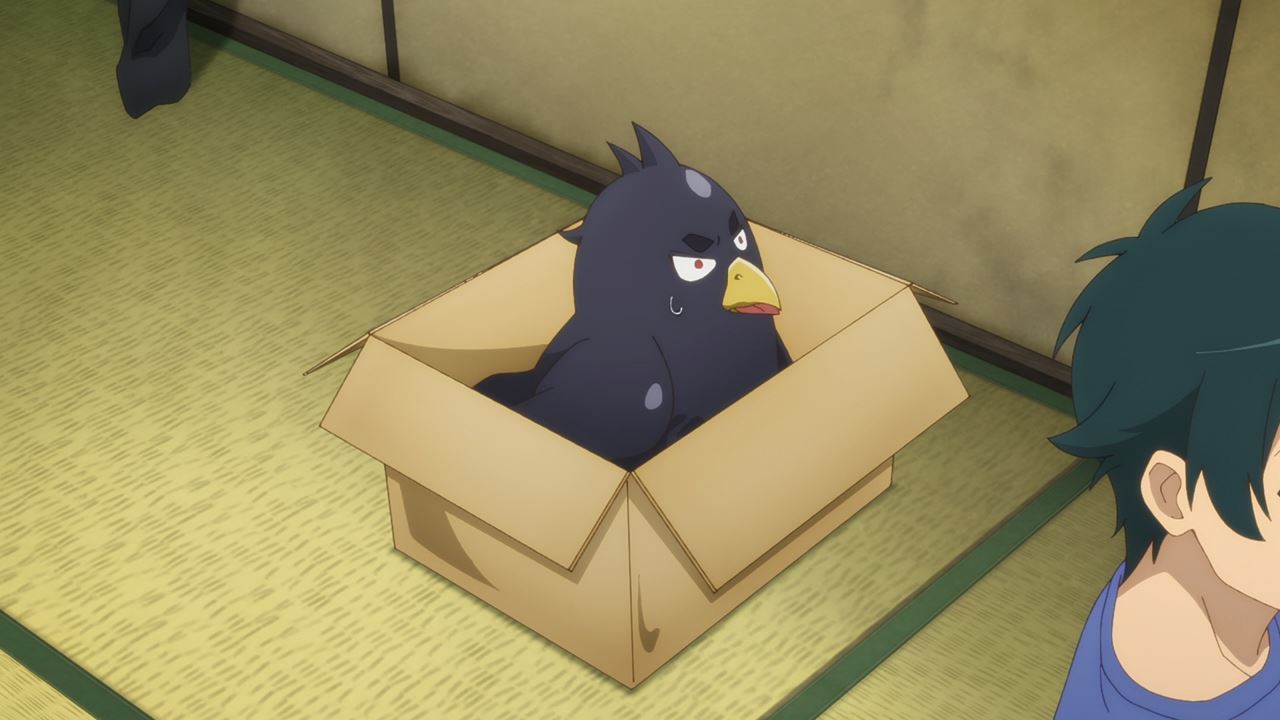 On the other hand, Camio warned Satan that Amane Ohguro is the one who attacked him and his surviving demons last night. Okay Camio, are you sure that Amane-san is the one who created those nasty tornadoes? 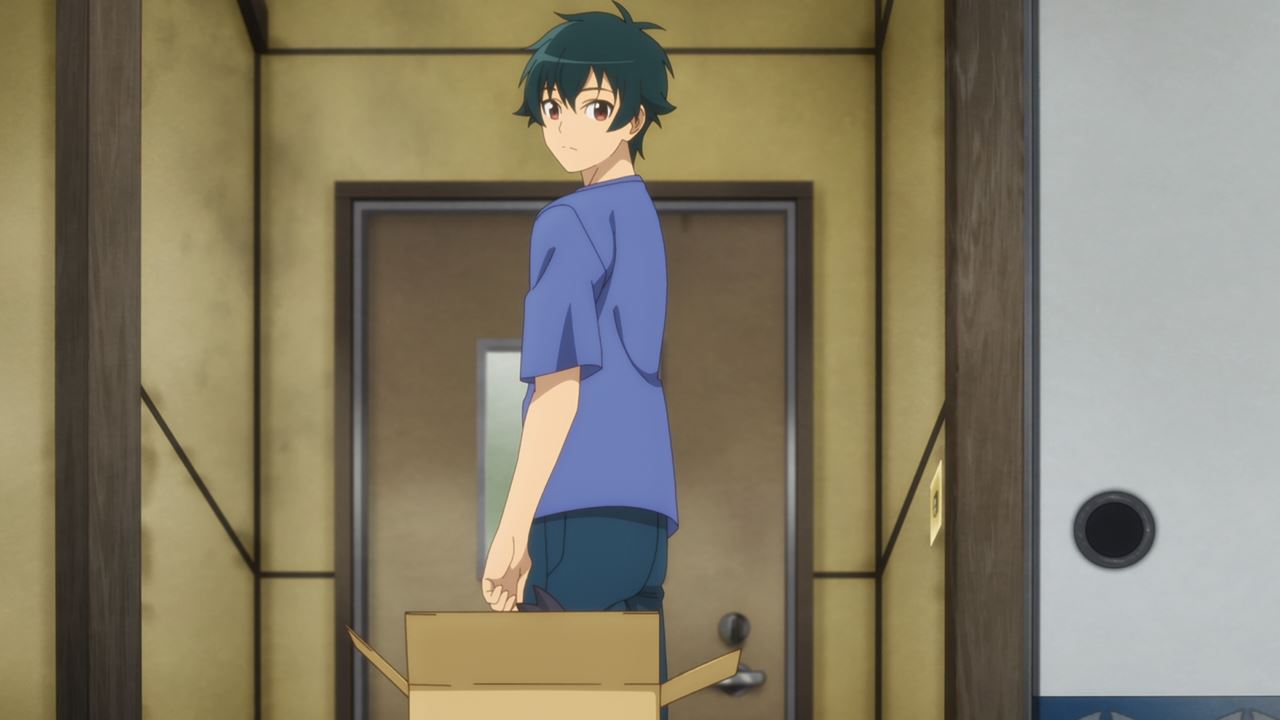 Even Satan is really skeptical if Camio’s claims are true. Seriously though, I want to know the truth regarding the legend of Mouren Yassa ’cause it might be the case where someone used the legend to hide something sinister. Kind of like a typical Scooby-doo villain. 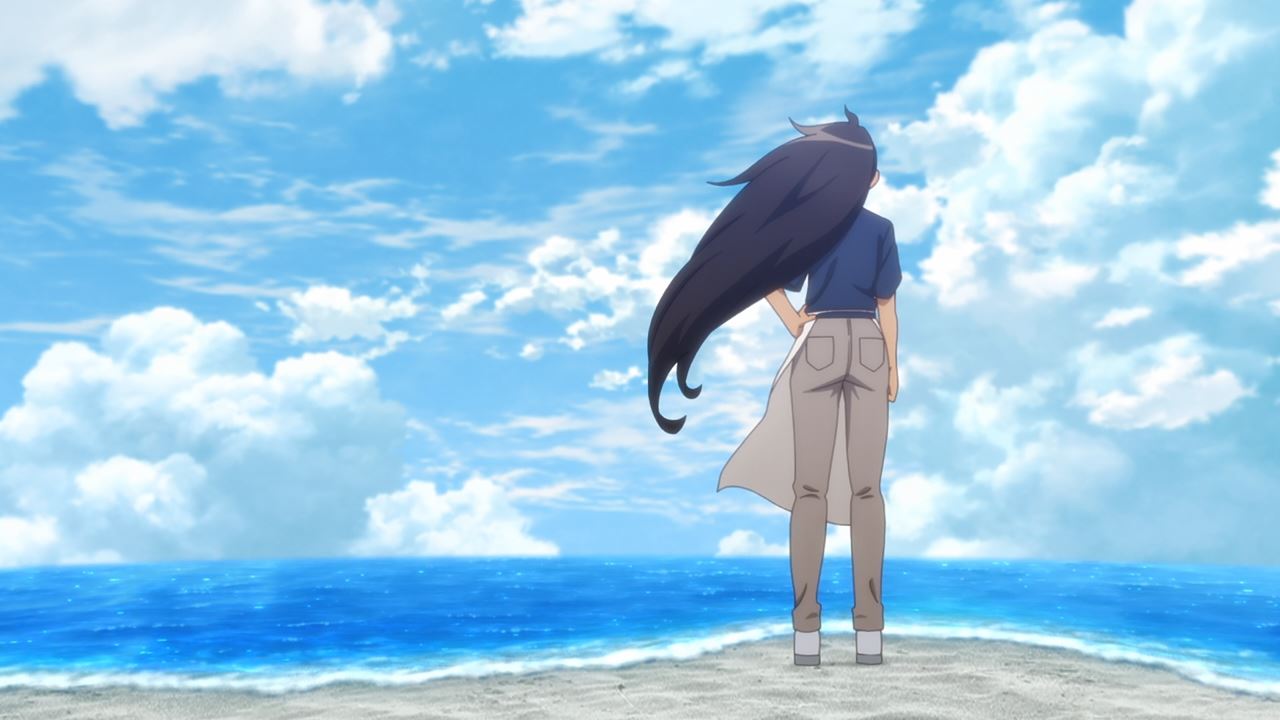 But anyways, I feel that the mystery in Choshi, Chiba thickens where aside from Mouren Yassa, I want to know who Amane Ohguro is as she’s no ordinary beach hut owner. With that said, I’ll see you next time!