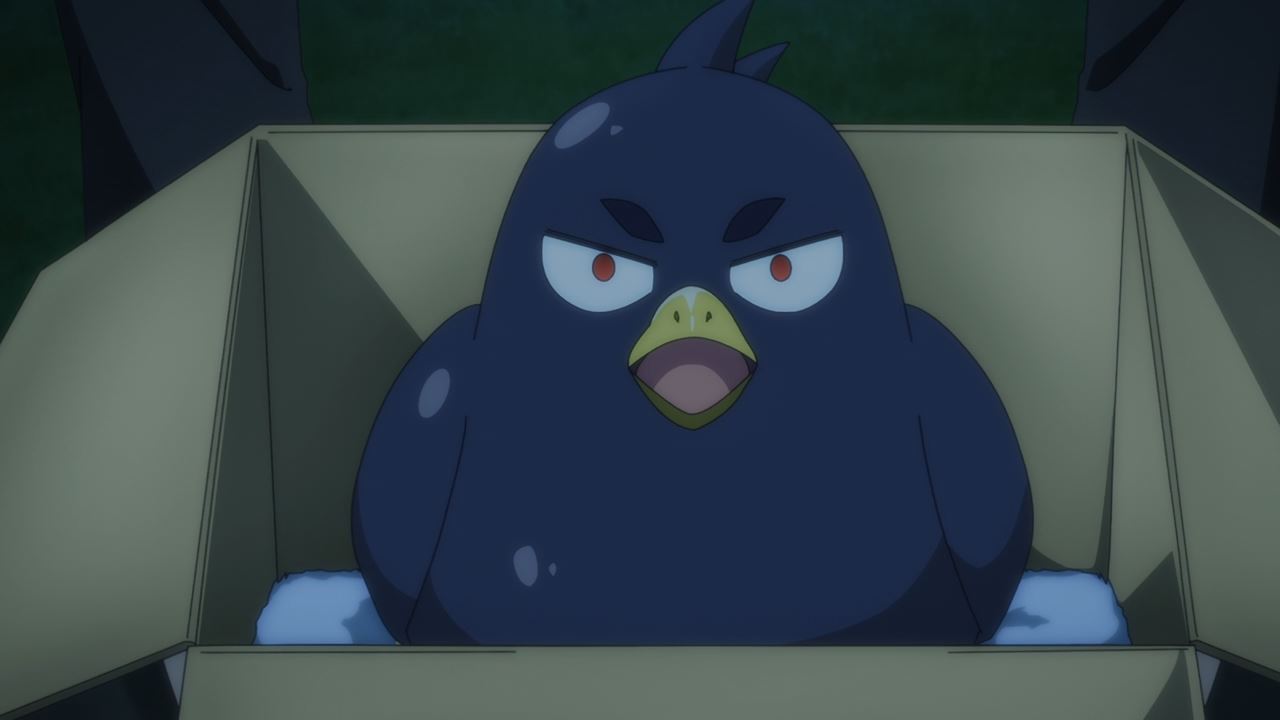 Let’s start this episode with Camio where in addition to being attacked by Amane Ohguro, he has something important to say as the town of Choshi will be under siege by an army of demons from Ente Isla.

Okay, looks like Sadao Maou (or Satan) and his allies will have to deal with demons who behave badly, although I’m curious on whether Amane Ohguro is an adversary or somewhat of a wildcard. 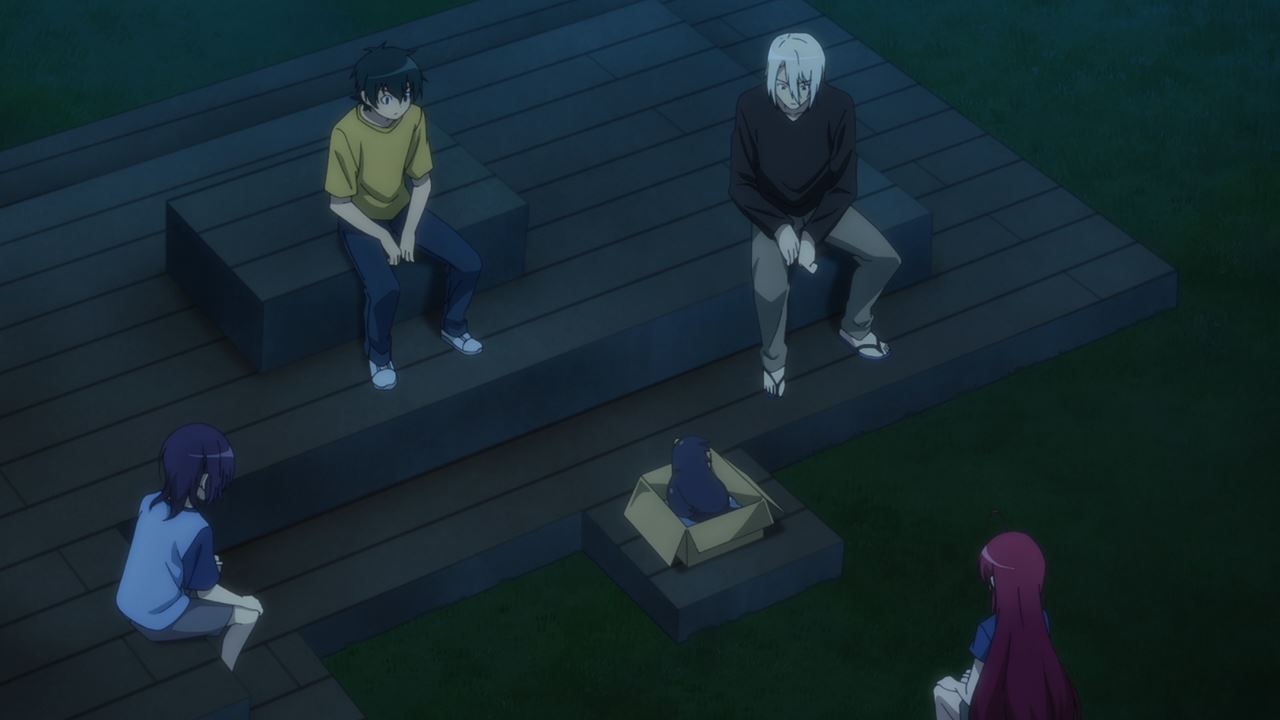 Now then, Camio explains that during Satan’s absence, the demons from Ente Isla are torn between two factions: The hardliners who wanted to continue their war against angels and humans, and the pacifists who wanted peace among living beings. 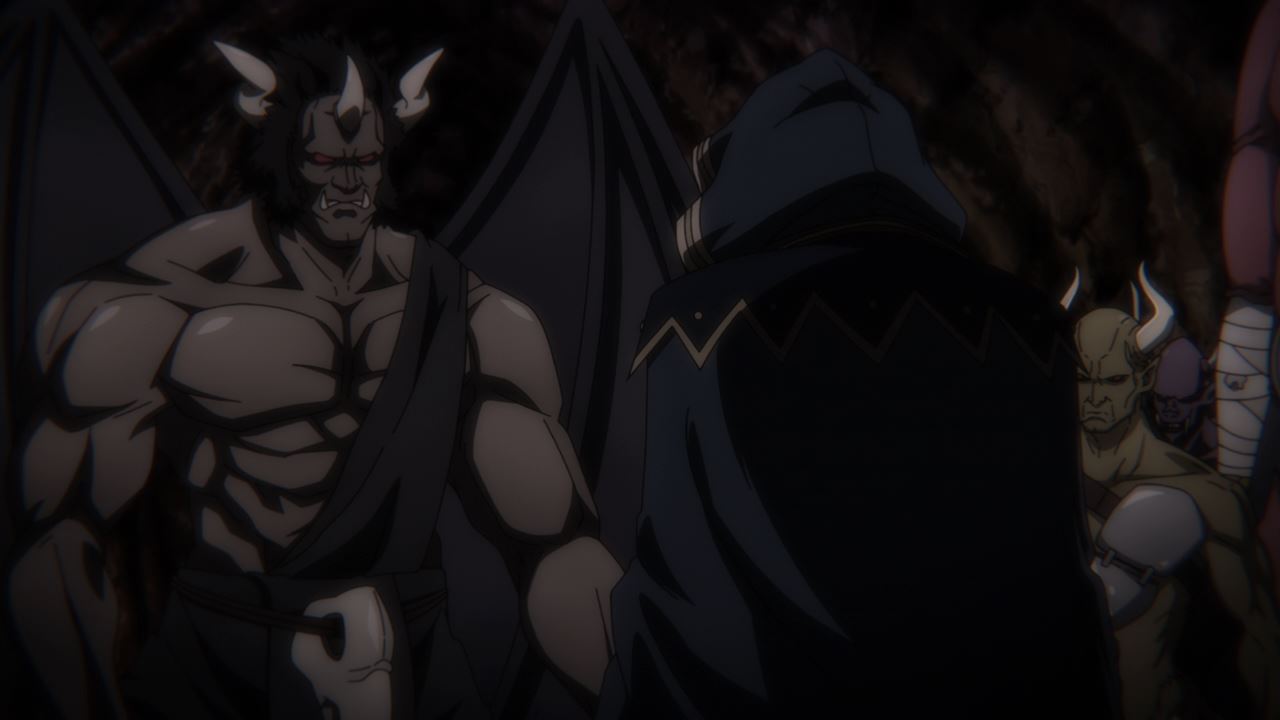 Of course, the hardliners are gaining the upper-hand as they’re being guided by someone else who went to Satanas Arc and told everything on how to beat the pacifists. 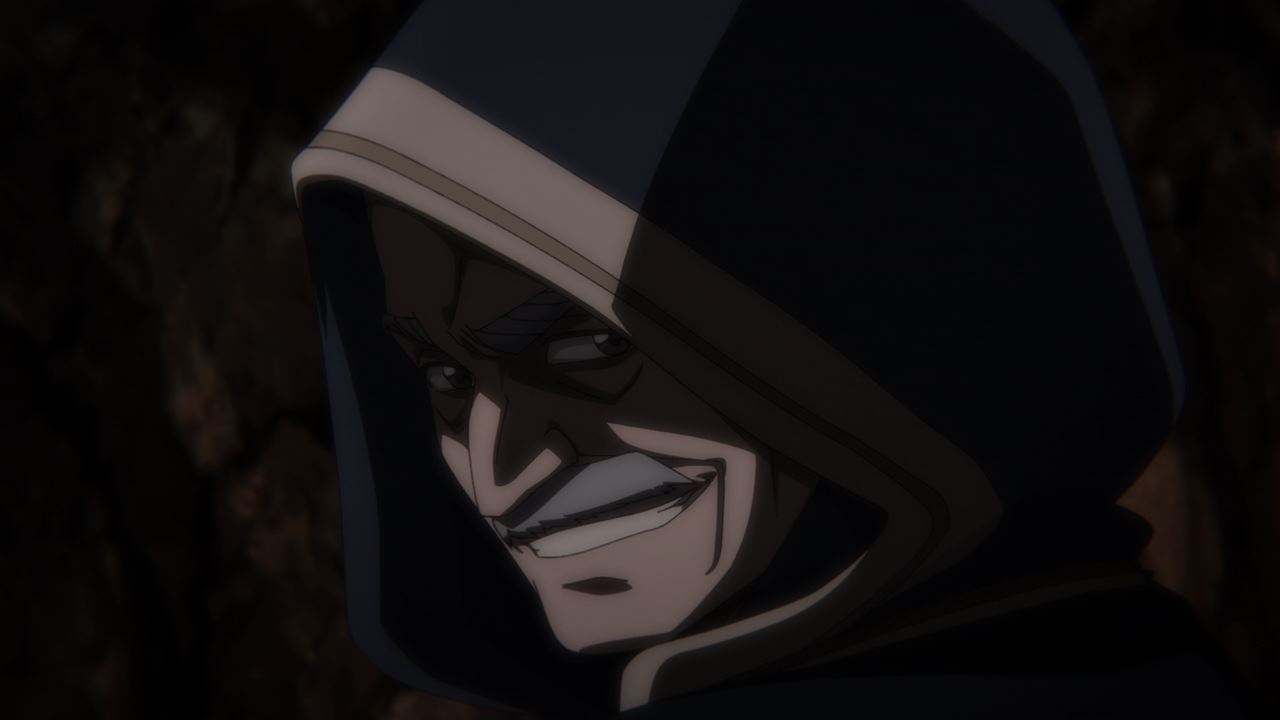 Someone like Olba Mayer where he rile up to hardliners by telling them to invade Earth and find the shards of Yesod in hopes that they can rule all realms with an iron fist.

Okay, I think this Olba guy needs to be dealt with as soon as possible ’cause he’s a pain in the ass! 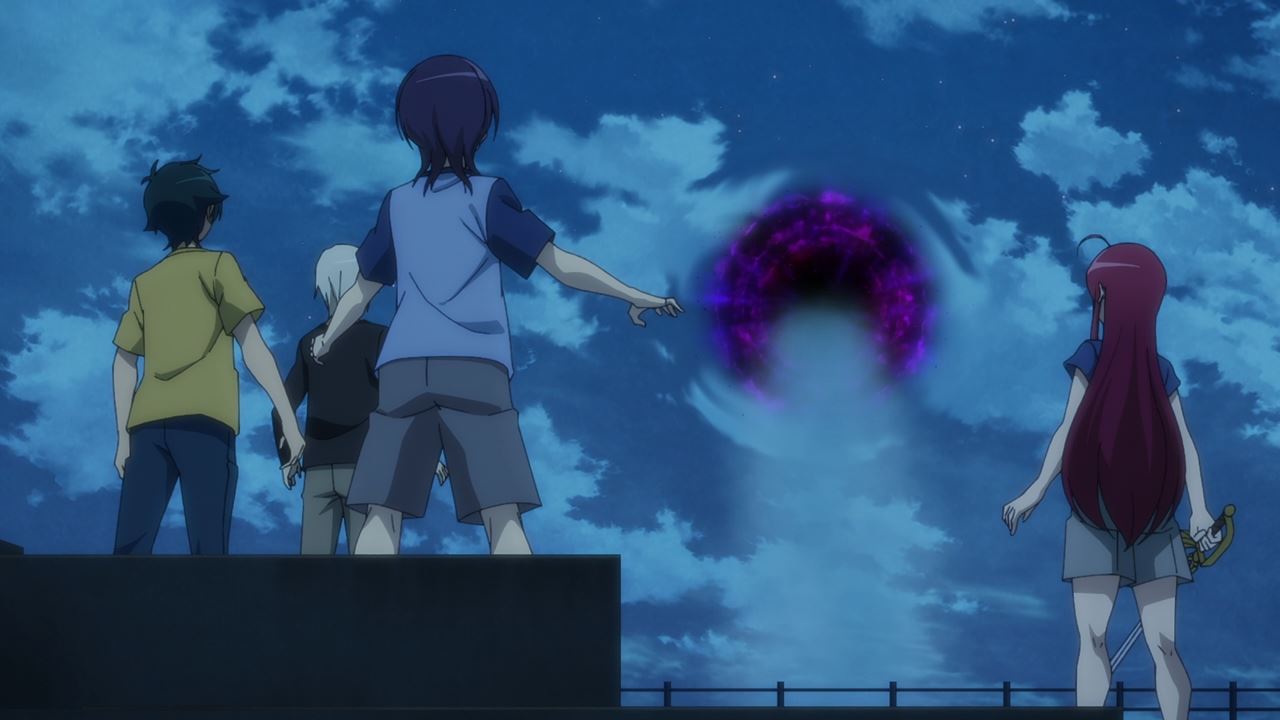 Right now, looks like Satan and the rest will have to stop the demons coming from Ente Isla. Sadly, the demon lord doesn’t have a suitable weapon. 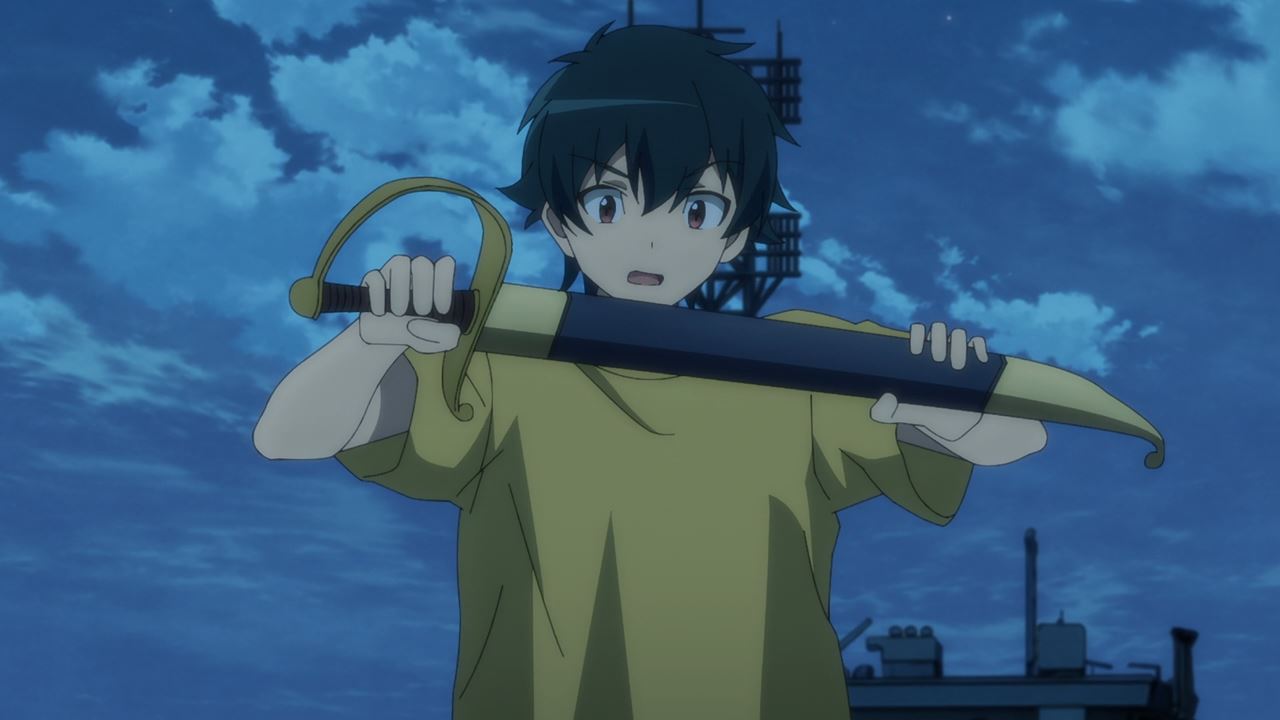 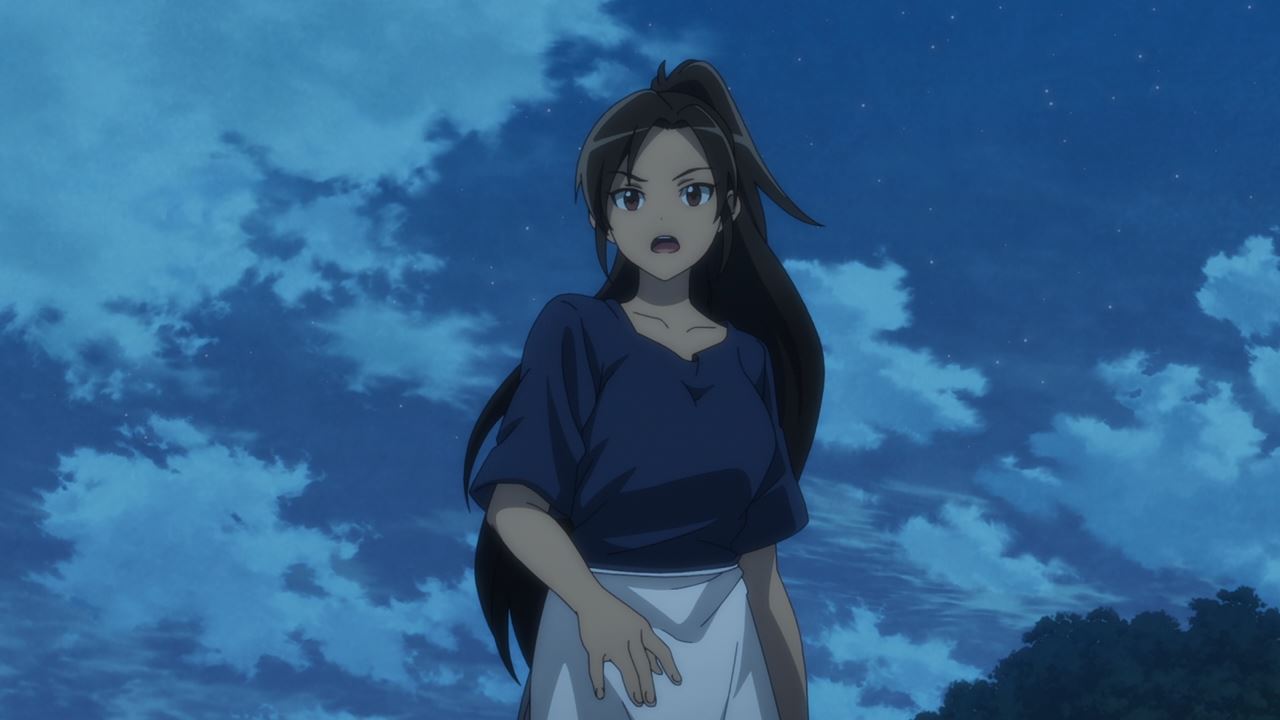 That’s where he received his sword from Amane Ohguro where I’m scratching my head on why she’s helping Sadao Maou/Satan. I feel that an explanation is needed for Amane-san as she might not be an adversary to Satan. 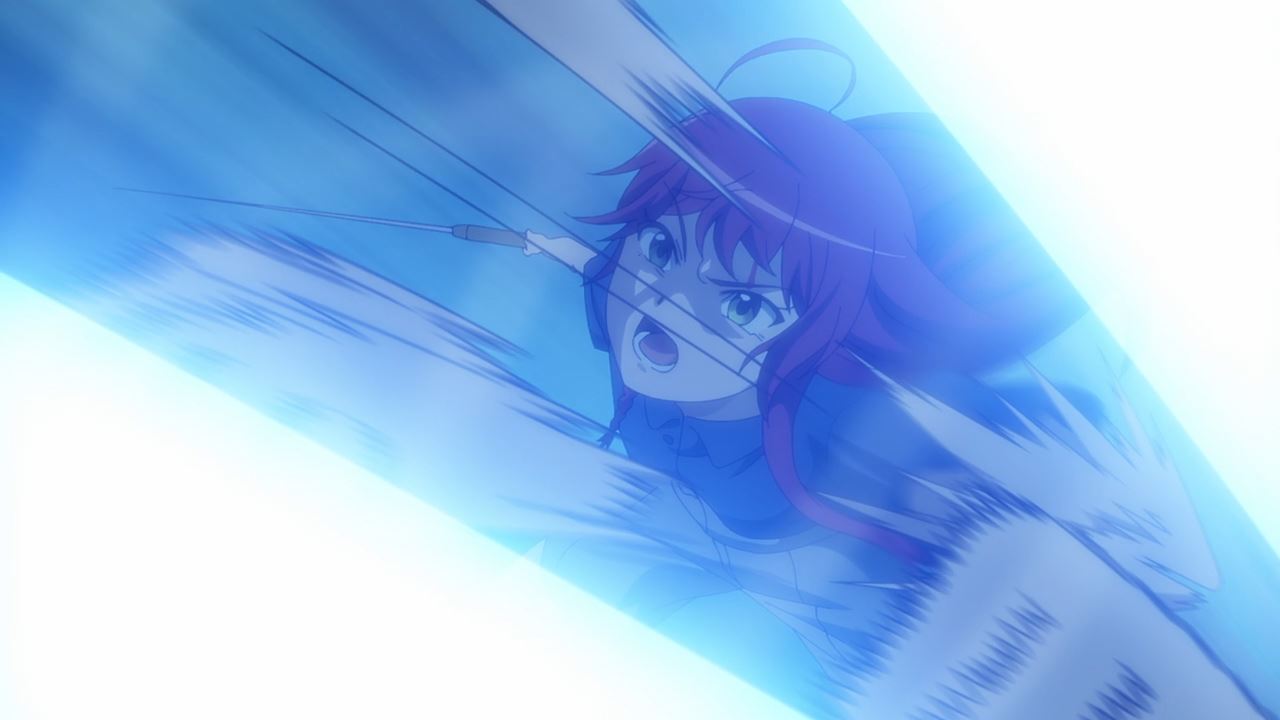 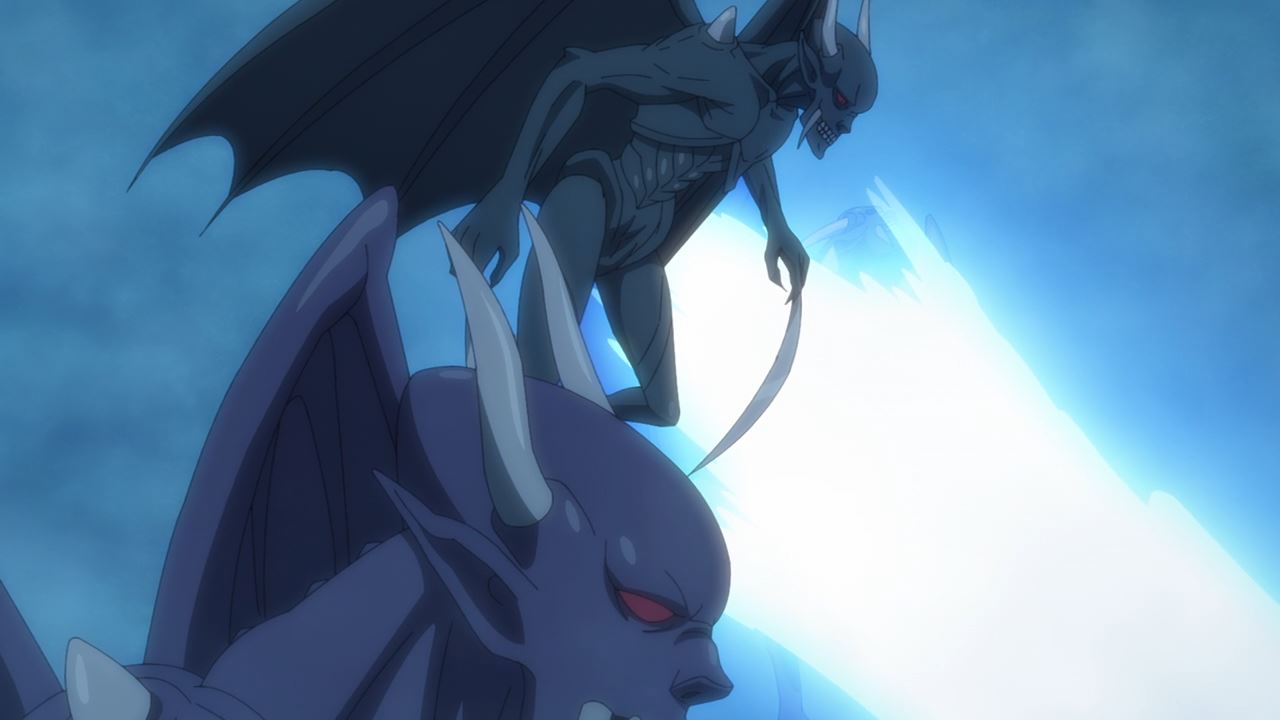 Now then, here’s Emilia Justina where she’ll take on the Malebranche demons, although it appears that the hero simply destroys them with her Piercing Aerial Volley. 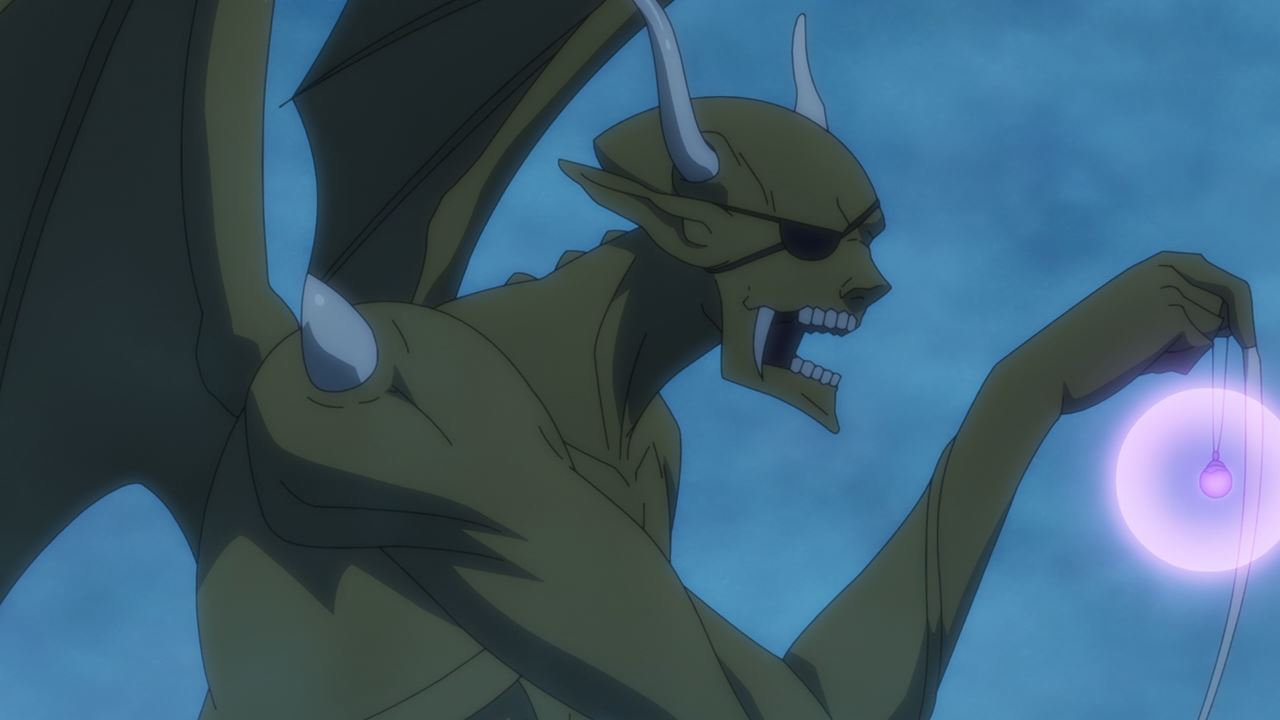 Meanwhile, looks like the leader has arrived as Ciriatto found a shard of Yesod from Emilia thanks to his Link Crystal. Then again, the only thing Ciriatto should worry is surviving against the hero. 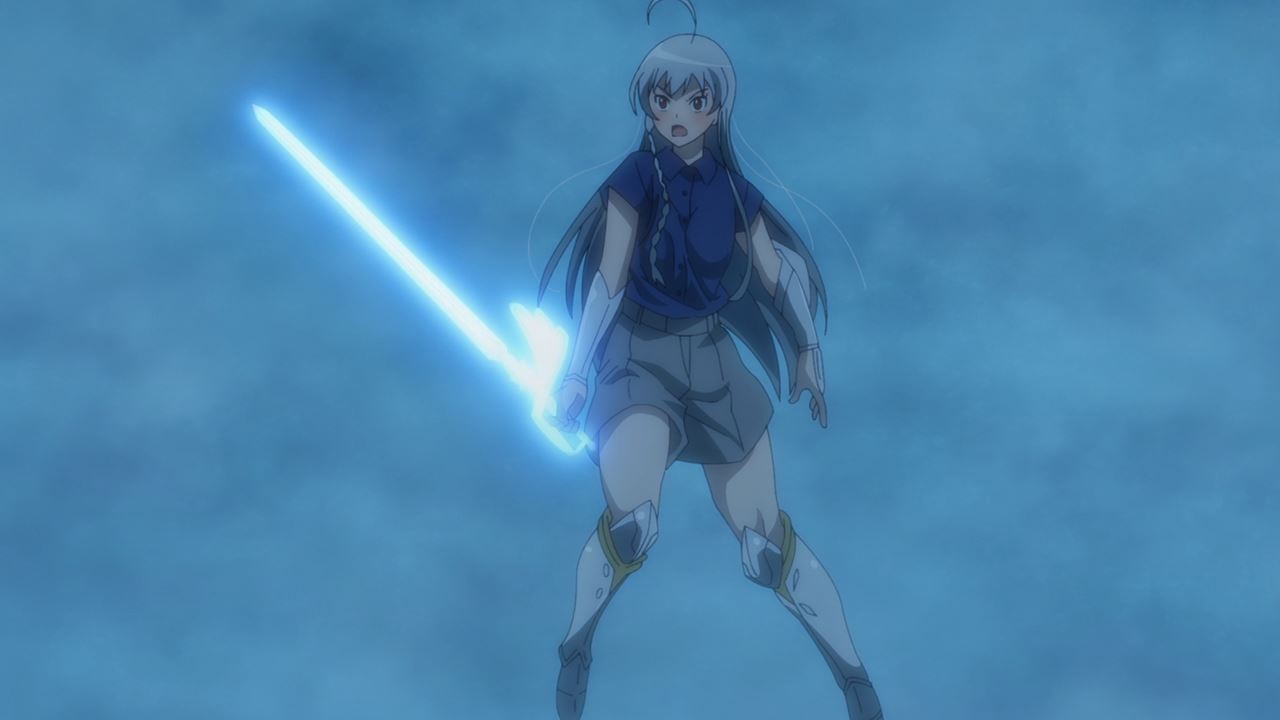 But here’s Emilia where she’s powered-up and ready to slay some rowdy demons. Also, let’s not forget that she has Alas Ramus on her side as the sacred sword just got bigger. 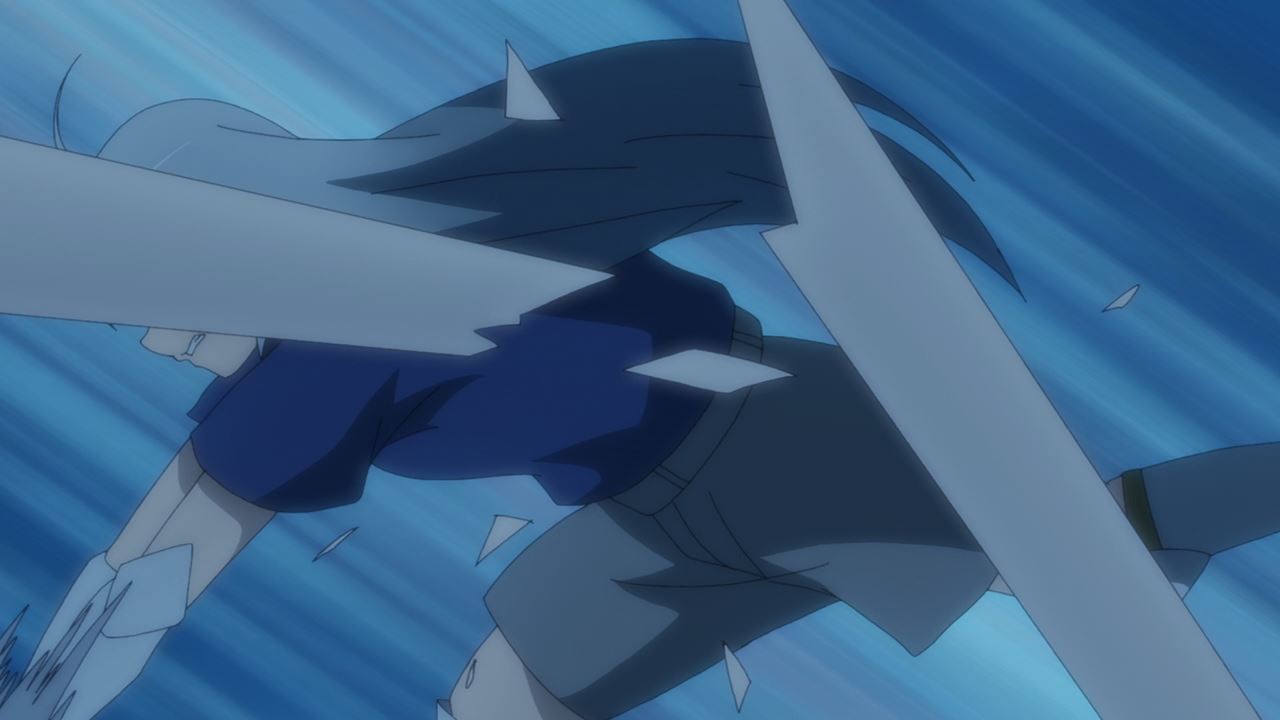 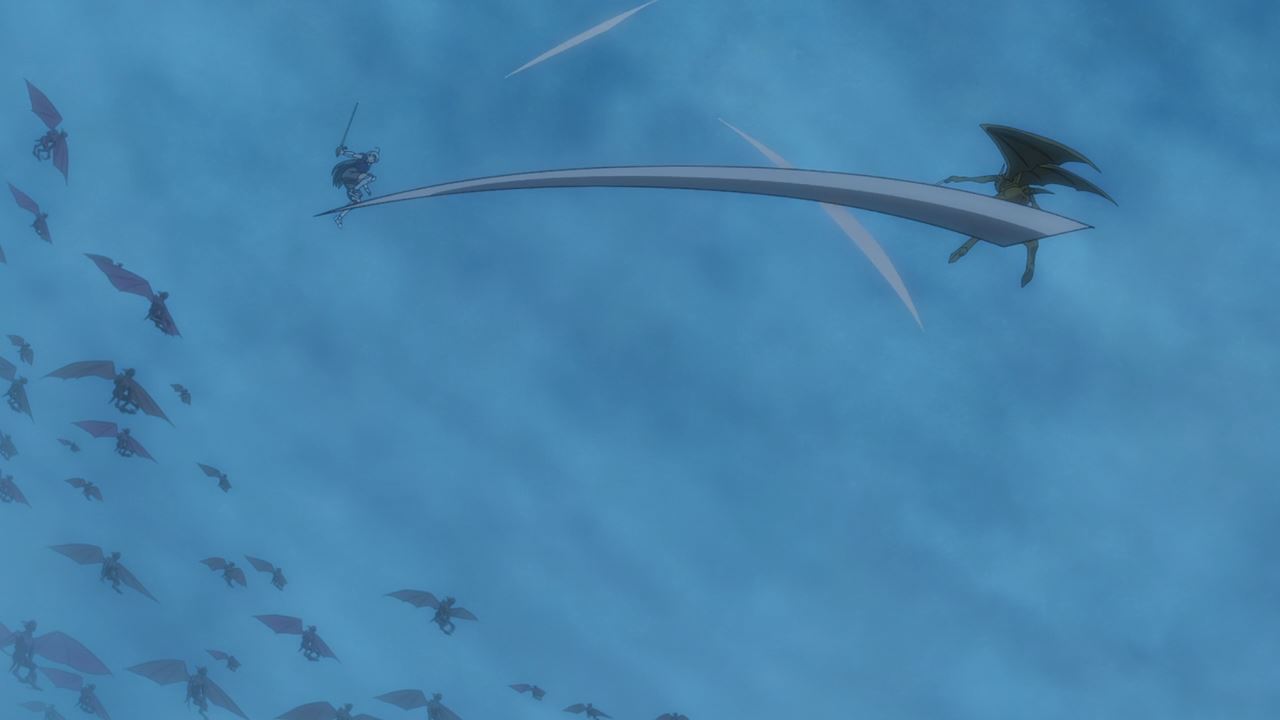 In any case, Ciriatto doesn’t stand a damn chance against Emilia as she cuts one of his nails. At this point, he should have give up the fight already as death is waiting for him. 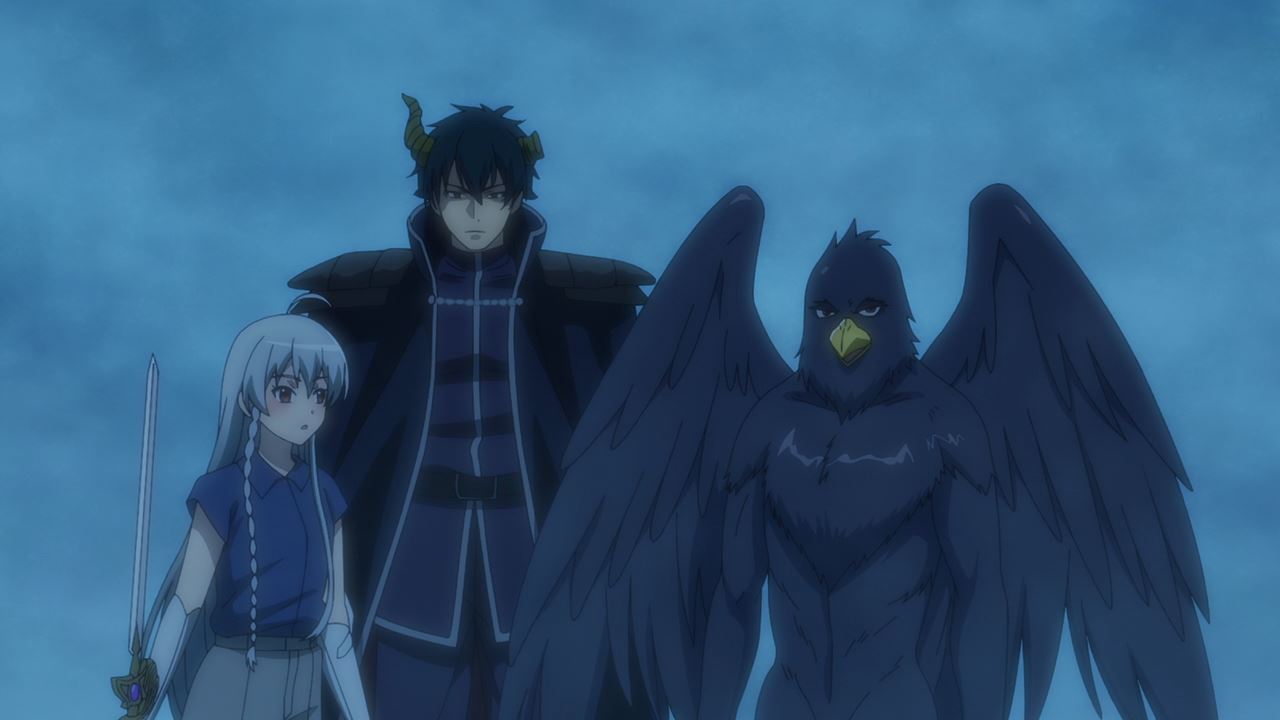 Of course, Ciriatto and his fellow Malebranche demons to surrender as Satan and his generals have arrived to stop their foolish act. Otherwise, the demon lord will bring hell towards his fellow demons who behave badly. 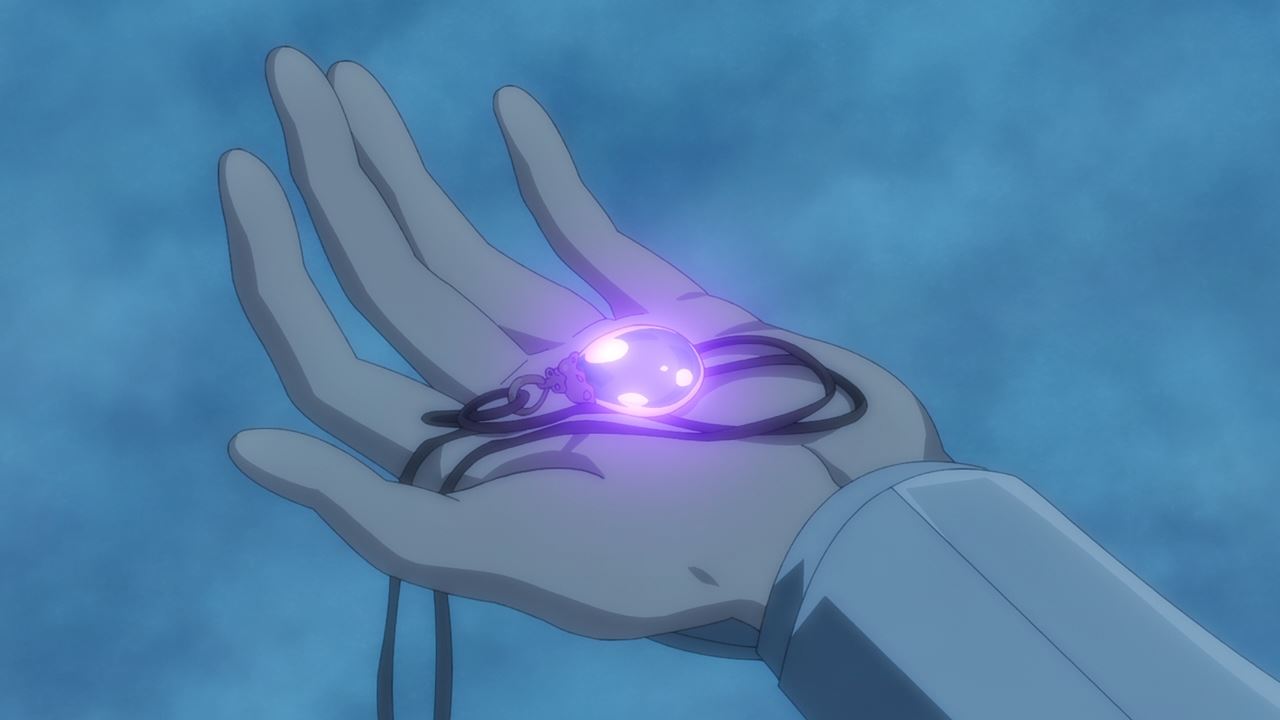 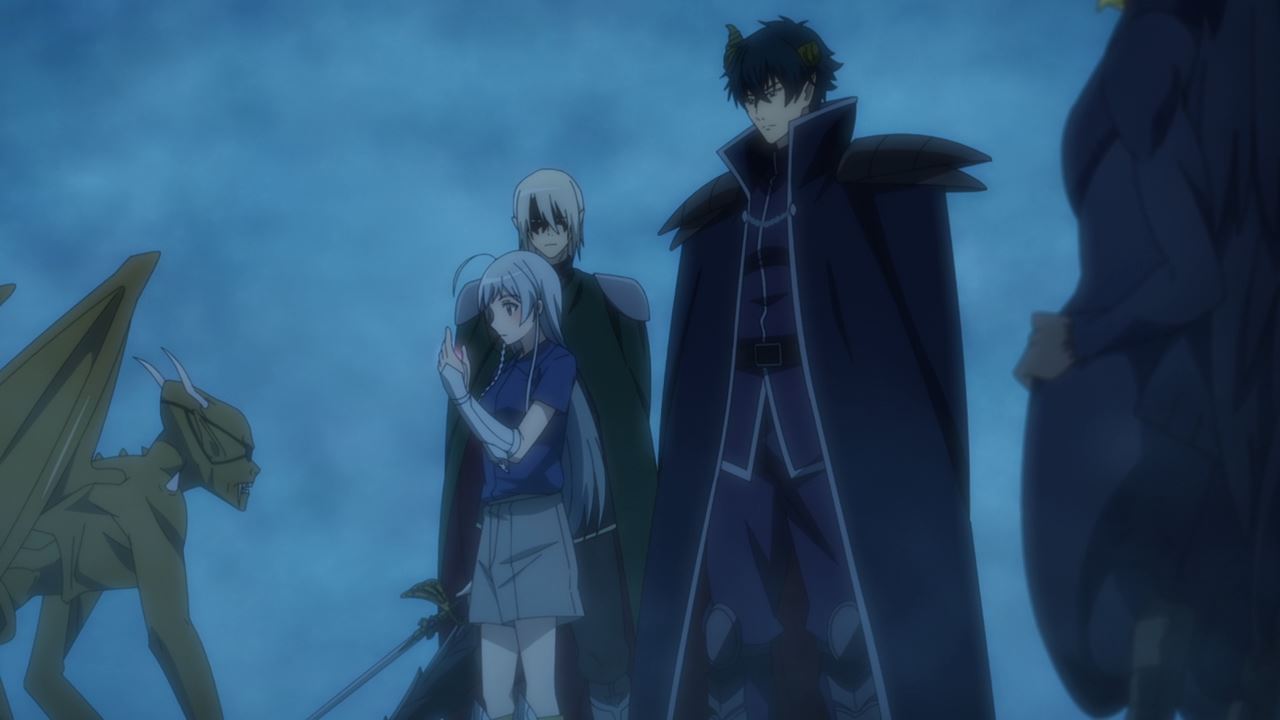 Anyways, looks like Ciriatto and his Malebranche demon army decided to surrender as the leader gave his Link Crystal to Emilia.

Oh yeah, I have a feeling that Ciriatto got the crystal from Olba where he needs to be punished for causing more trouble. 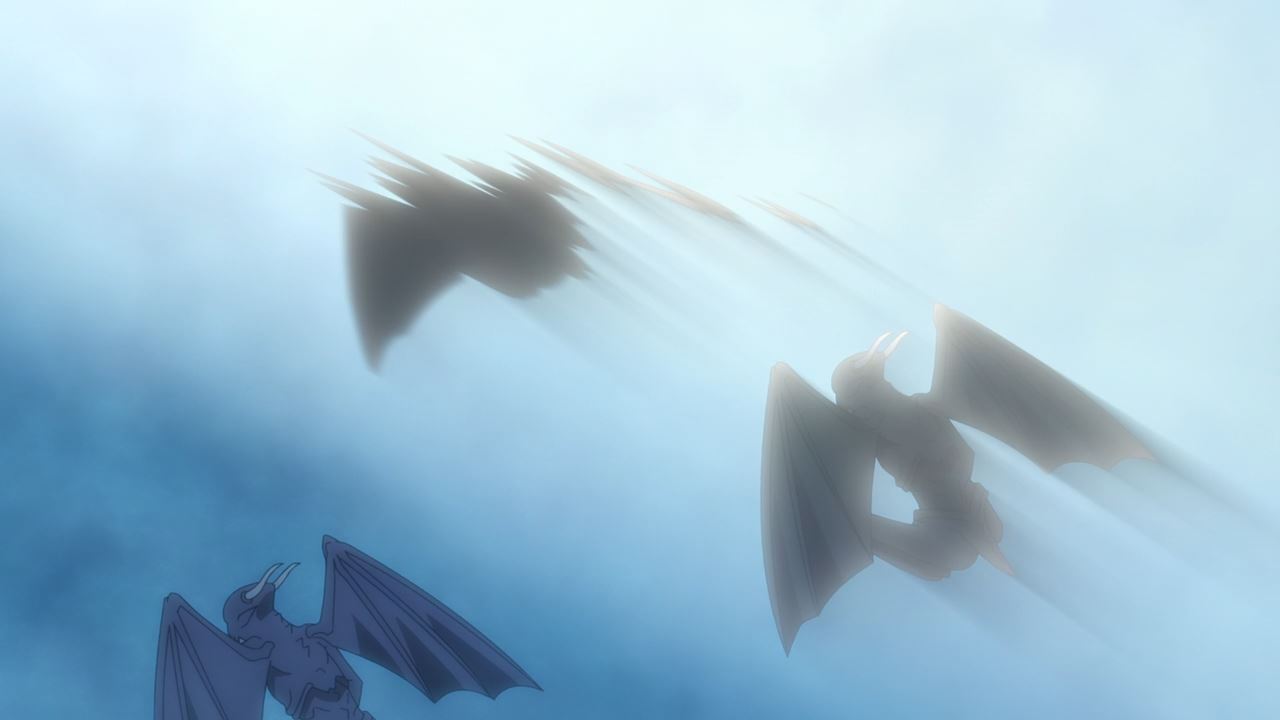 And so, the demons are being sent back to Ente Isla thanks to the lighthouse’s beams. Don’t worry, it doesn’t hurt them a bit at all. 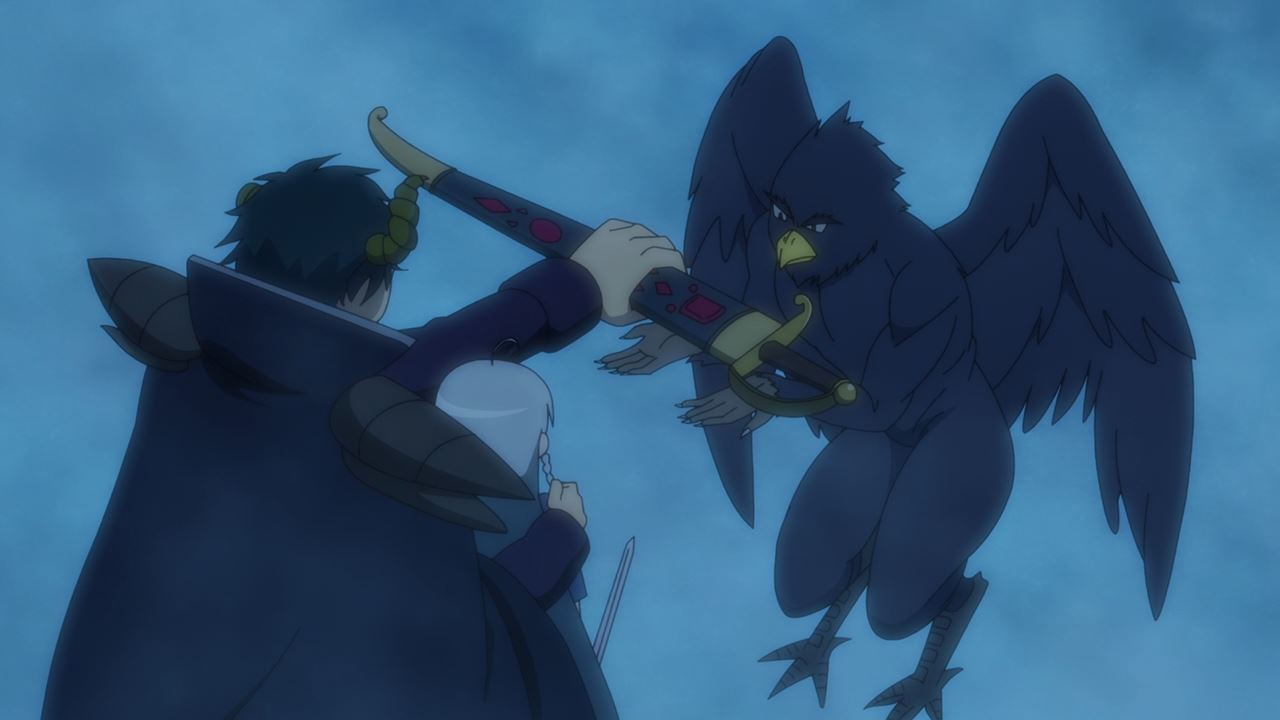 As for Camio, he’ll be returning to Ente Isla as Satan told his advisor to take his sword and oversee the demon realm in his absence by stopping the hardliners.

After all, Satan needs to conquer Earth first by working at a burger joint and climb his way to the corporate ladder. 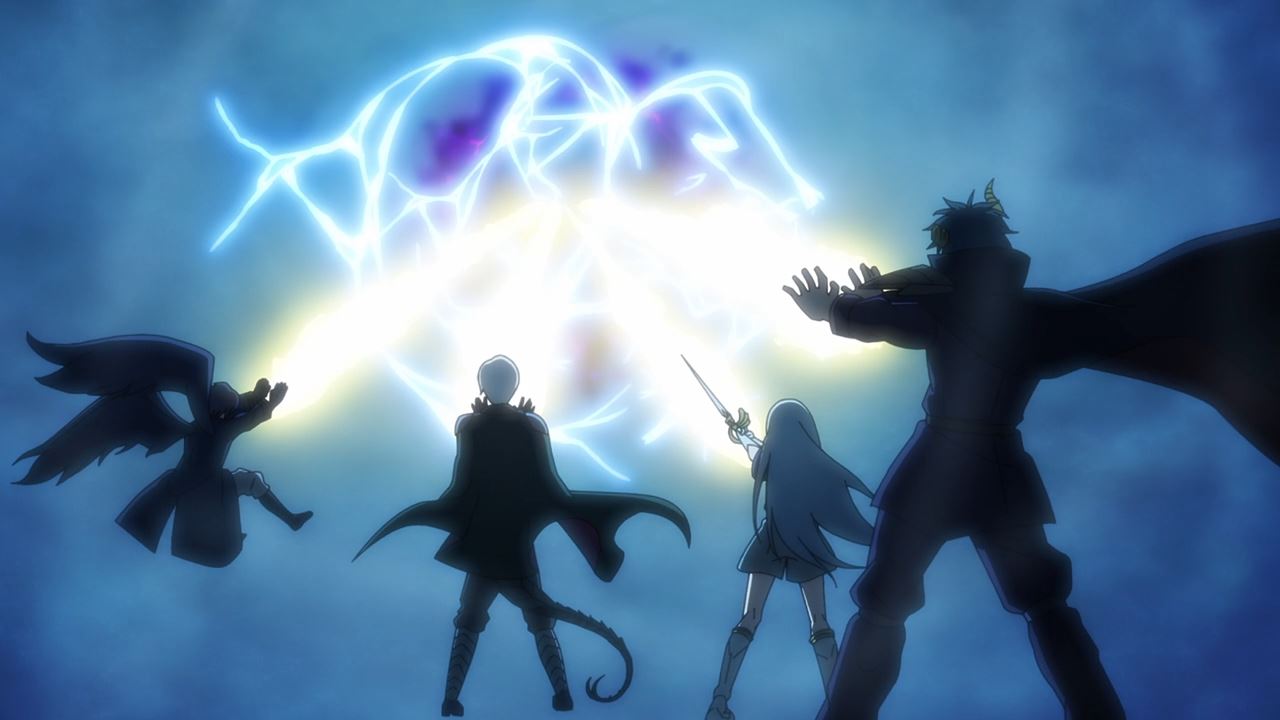 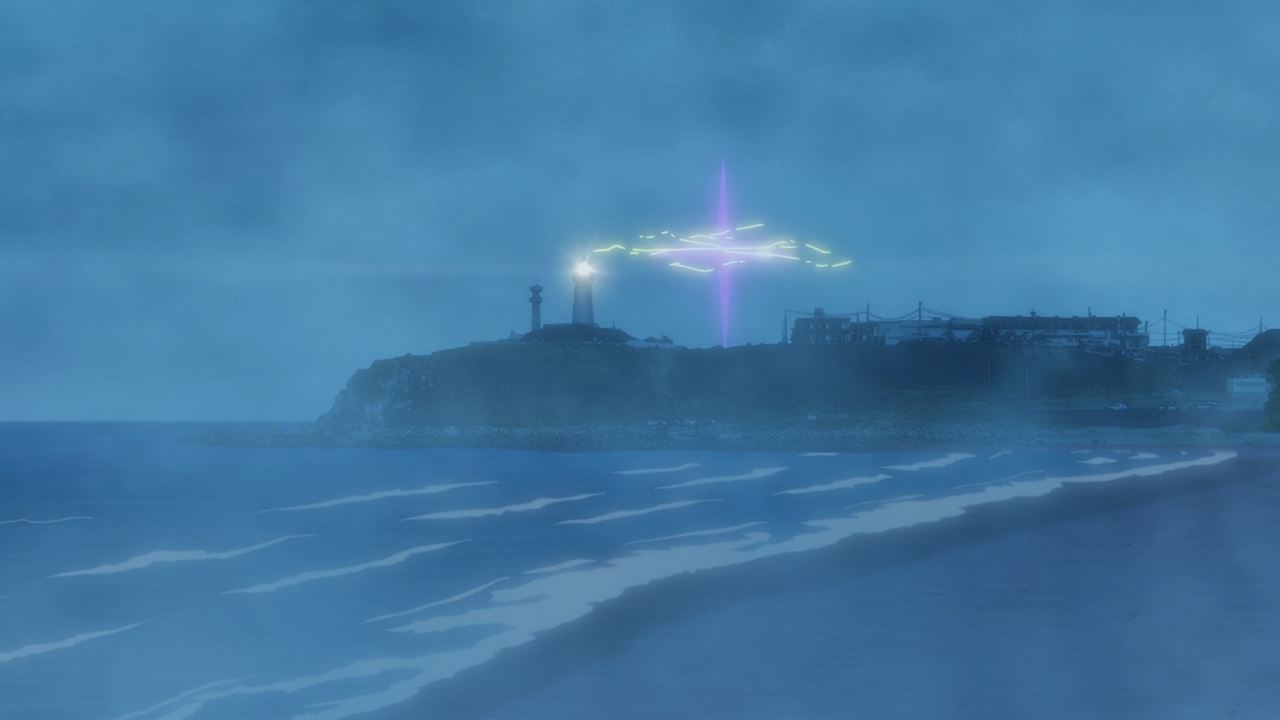 Now that the demons have safely returned to Ente Isla, it’s time for Satan and his generals, plus the hero Emilia Justina to seal the gate until it’s closed off for good. Looks like Choshi is finally safe! 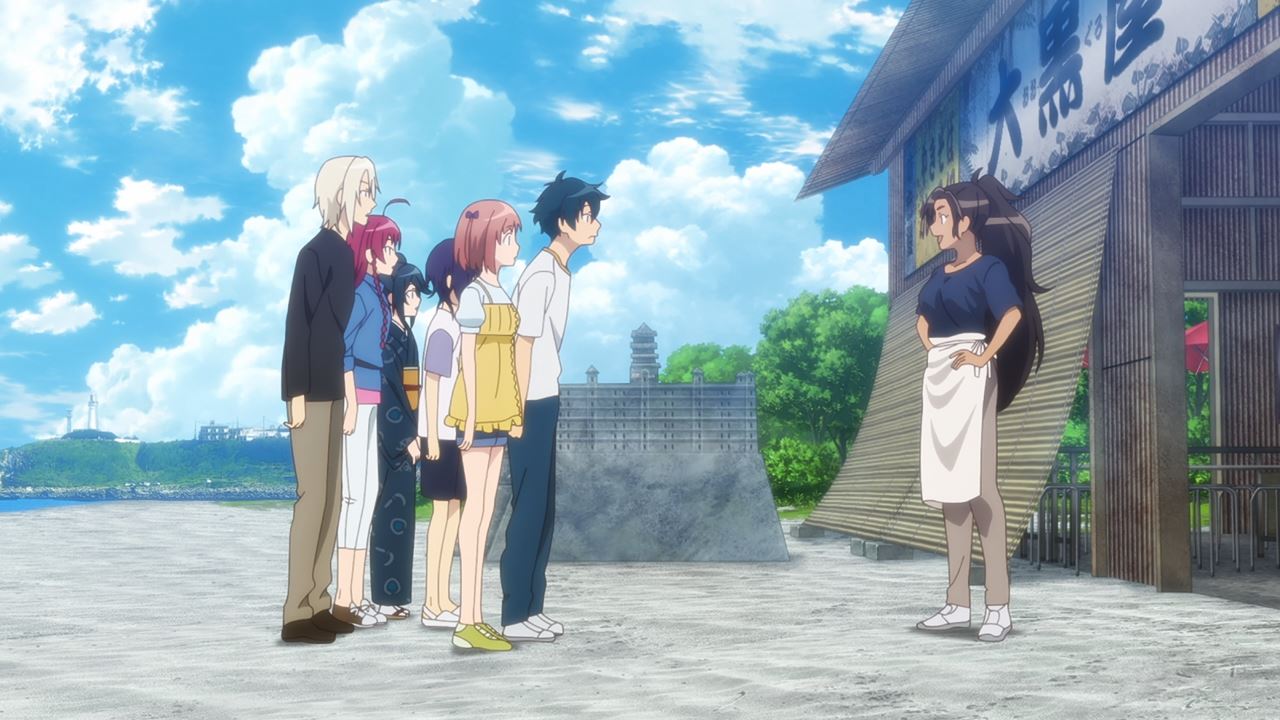 Of course, it’s time for Sadao Maou and his friends to receive their paycheck from Amane Ohguro where they really work hard on keeping the beach hut clean and profitable during the busy summer month. 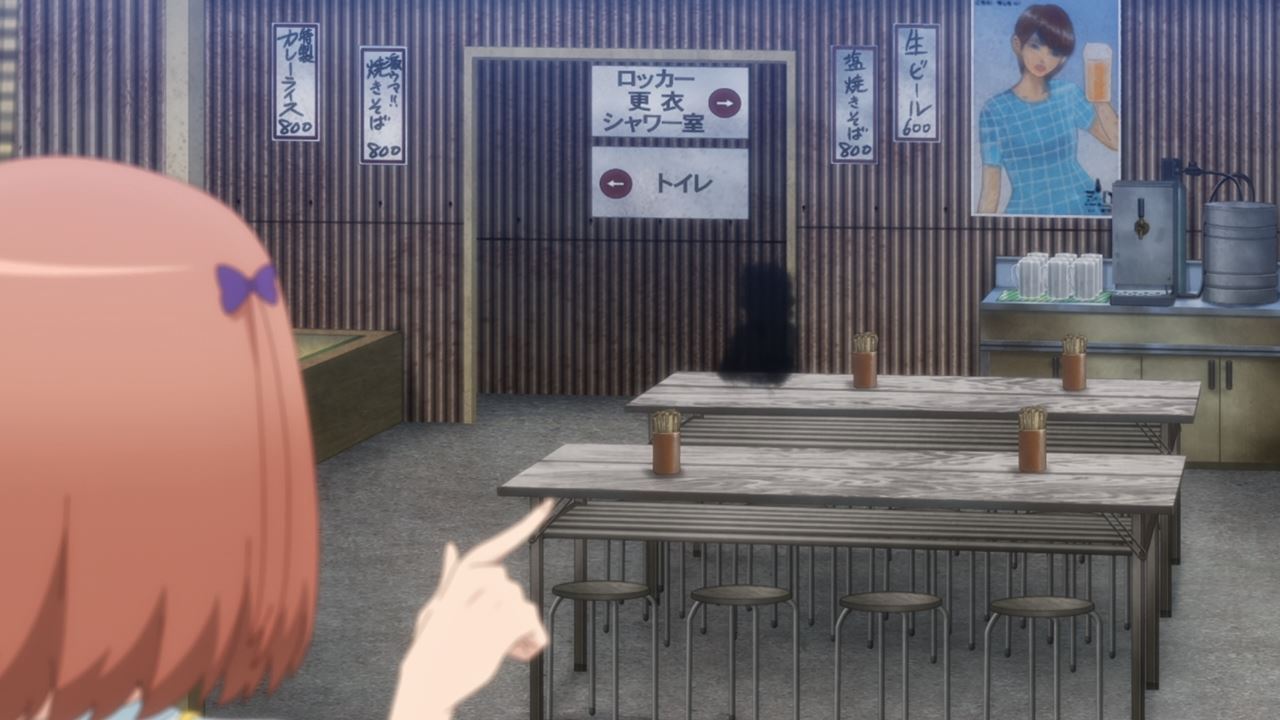 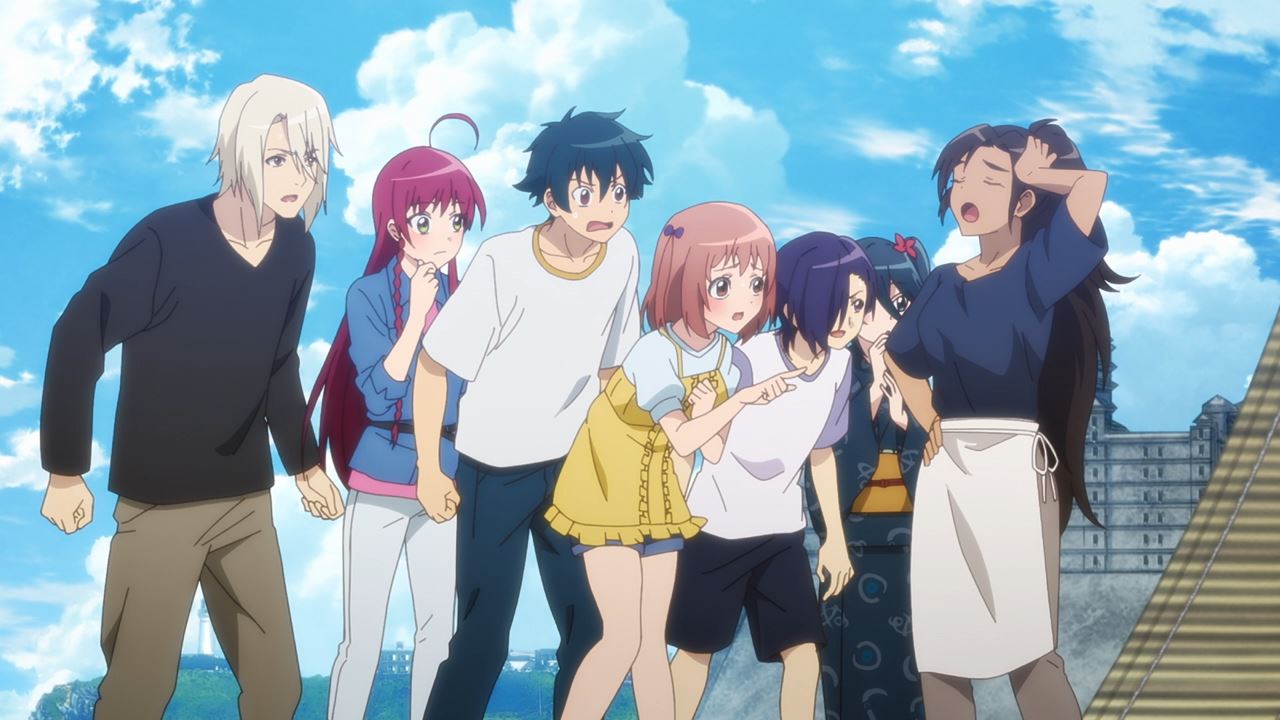 However, Chiho Sasaki noticed that there’s a dark shadow sitting at the beach hut. Oh boy, looks like the Sadao Maou and the rest are scared that this beach hut is actually haunted. 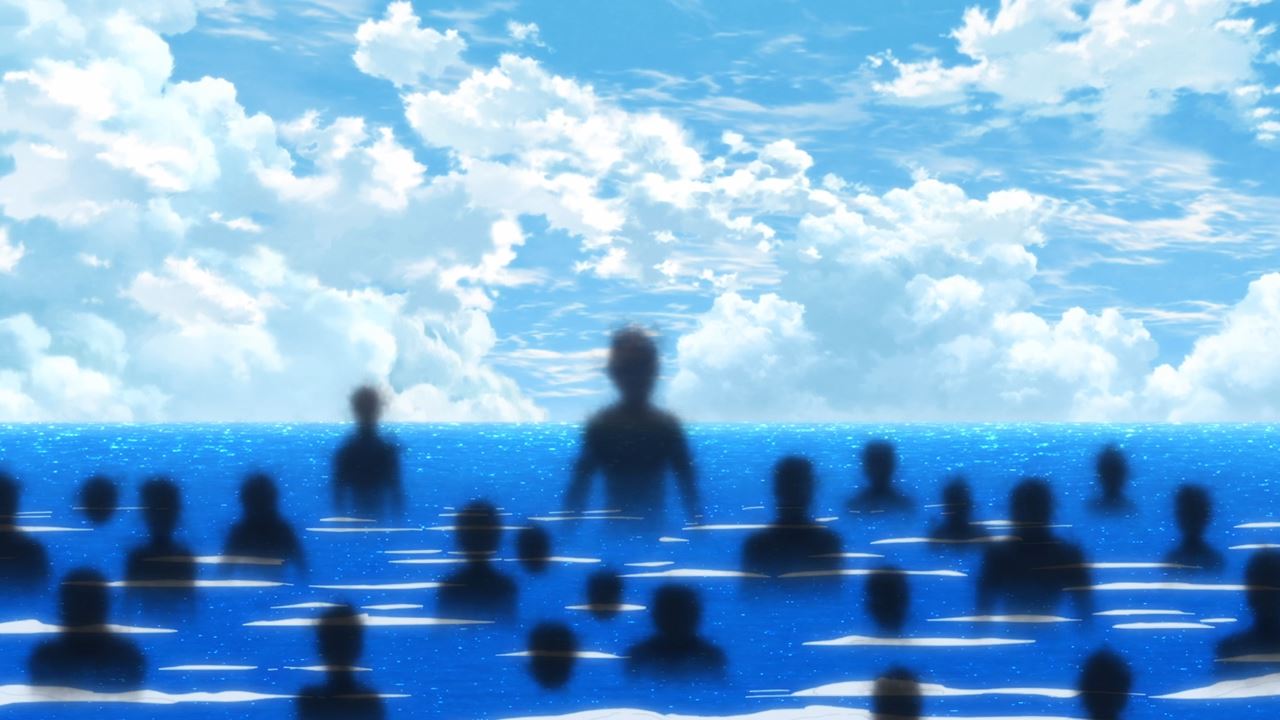 Not only that, but dozens of shadows are crawling up from the ocean. Are they gonna drag Maou-san and the rest to the afterlife much like the Legend of Mouren Yassa?

Turns out that it was all just a lie as Amane-san revealed that the town of Choshi is actually a sacred place where departed souls return to clean themselves during the Obon festival.

Also, turns out that Amane and her family are actually guardian angels who protect Choshi from demons and other malicious beings. It’s no wonder why she can kill demons by blowing them away. 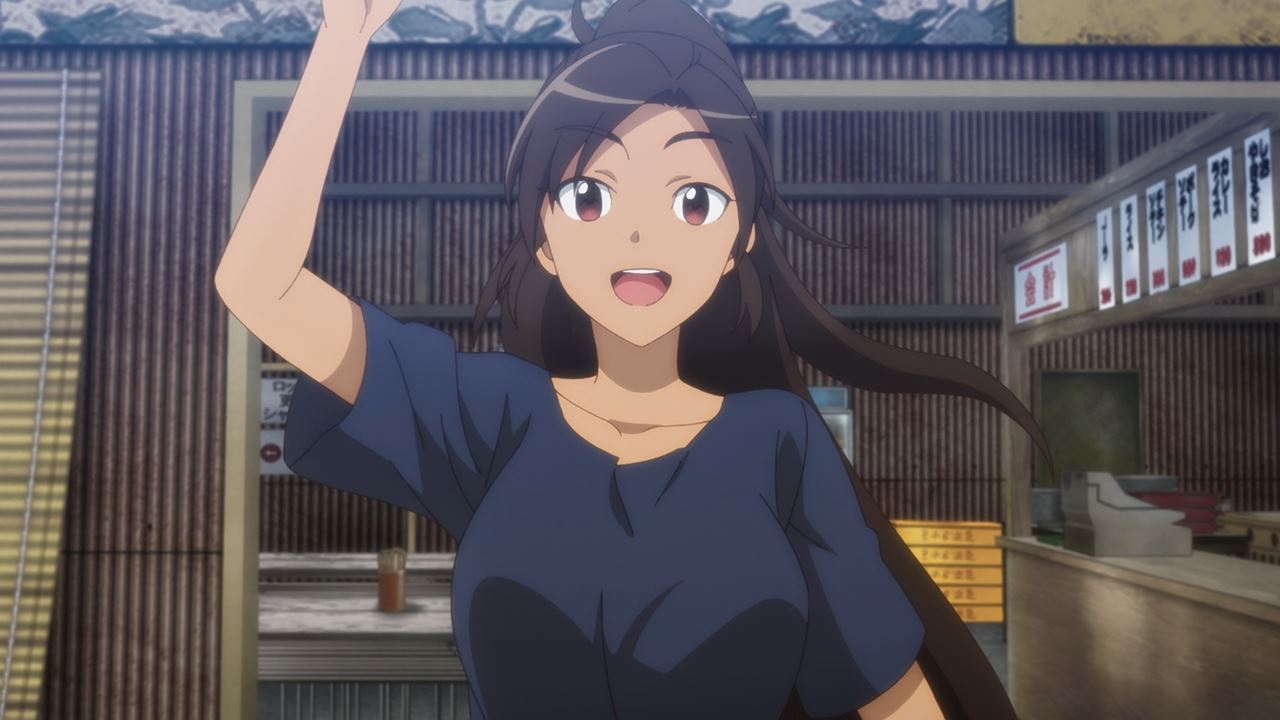 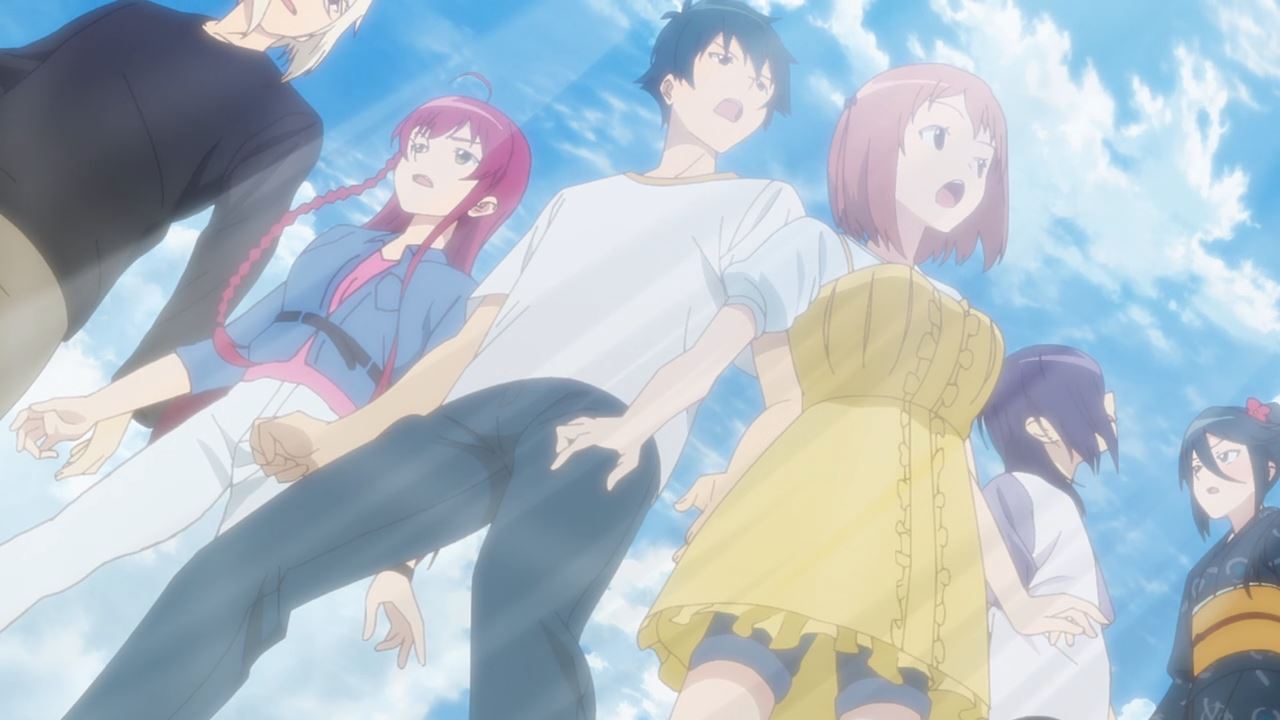 Sadly, looks like it’s time for Amane Ohguro to send them back to Tokyo and wipe their memories of this event. It would be bad if someone tries to find this place and disturb the spirits there. 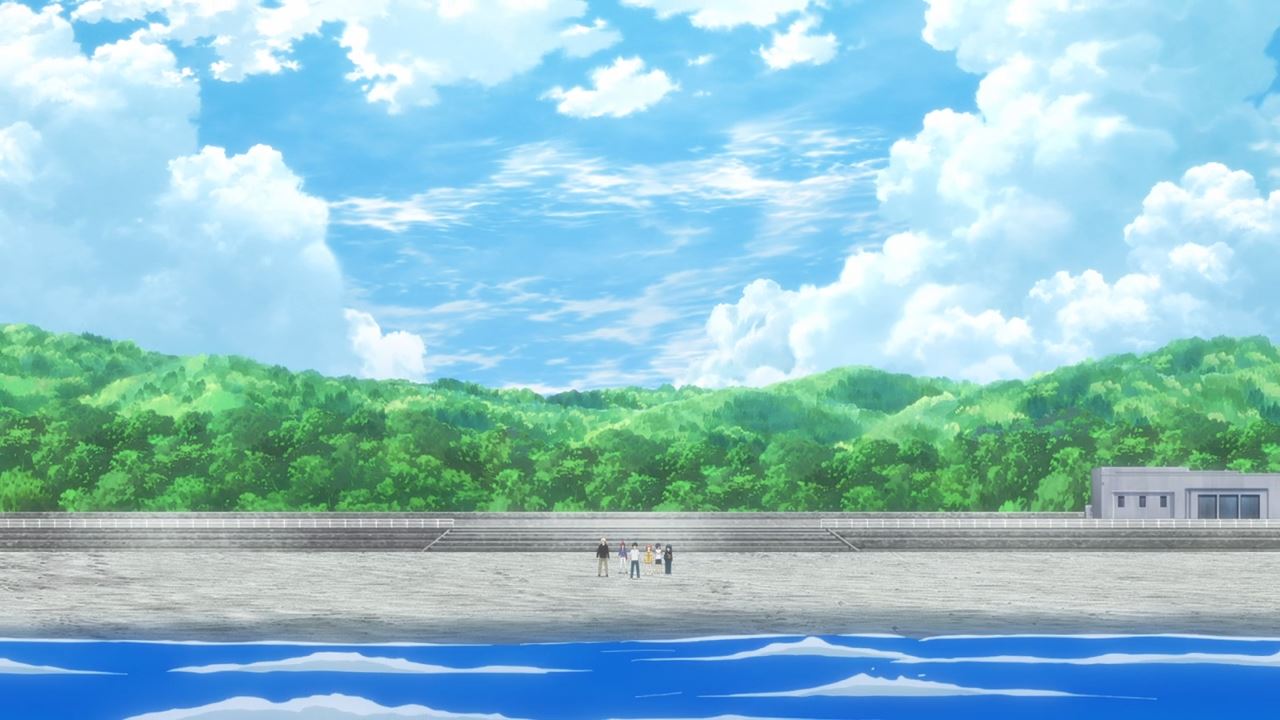 Also, the beach hut is gone, almost as if the building doesn’t exist in the first place. Still, I’m worried that Maou-sama and his friends won’t get paid after this. 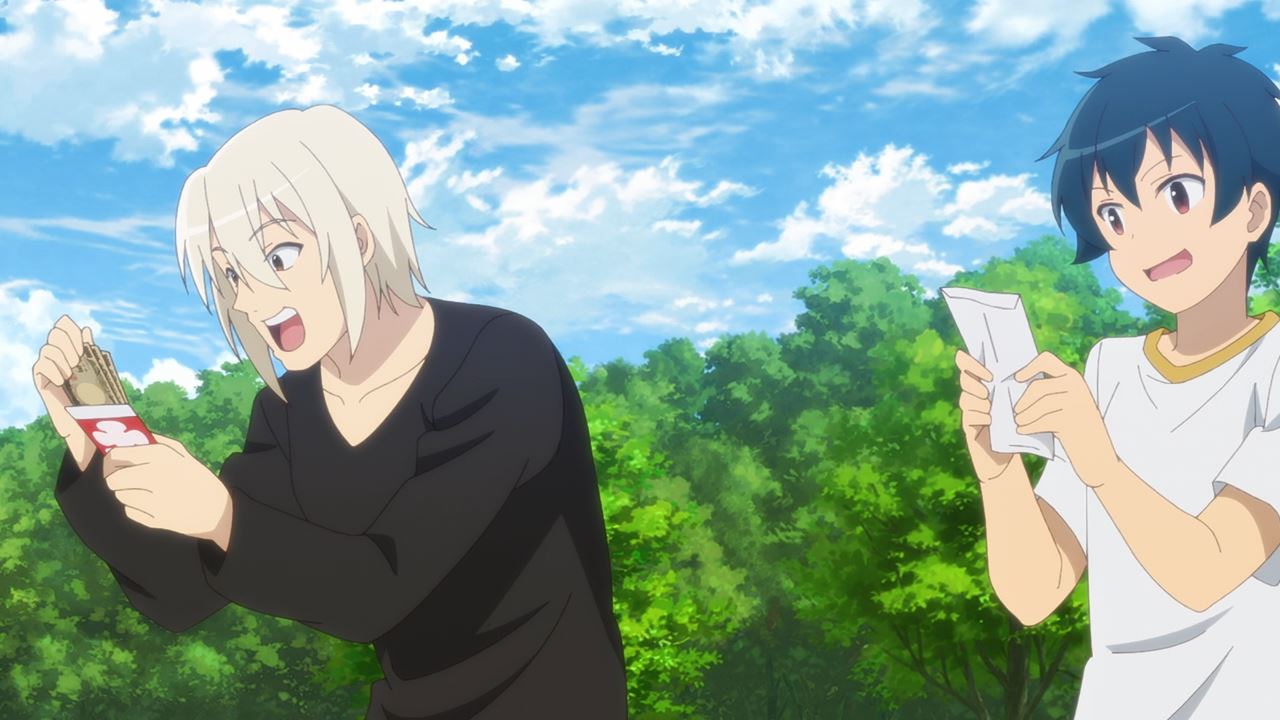 Oh wait, Maou-san and the rest got their paycheck, they received some good news that their apartment is rebuilt, and they still remember the whole ordeal in Choshi.

Honestly, the landlady is one mysterious fellow who lead her tenants to weird people and places. 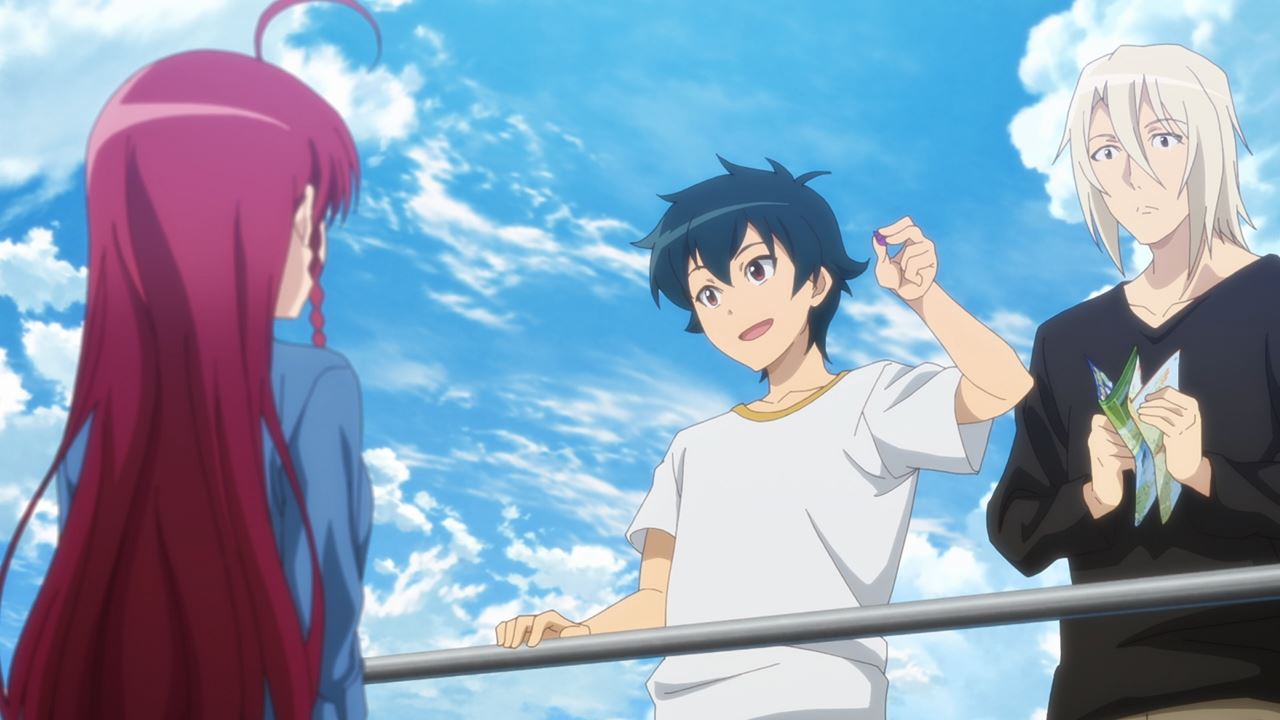 One last thing, looks like Sadao Maou gave a small fragment of Yesod to Emi Yusa where it might serve as a clue on Olba Mayer’s whereabouts. C’mon, that guy is an obstacle to Maou’s plans to take over the world. 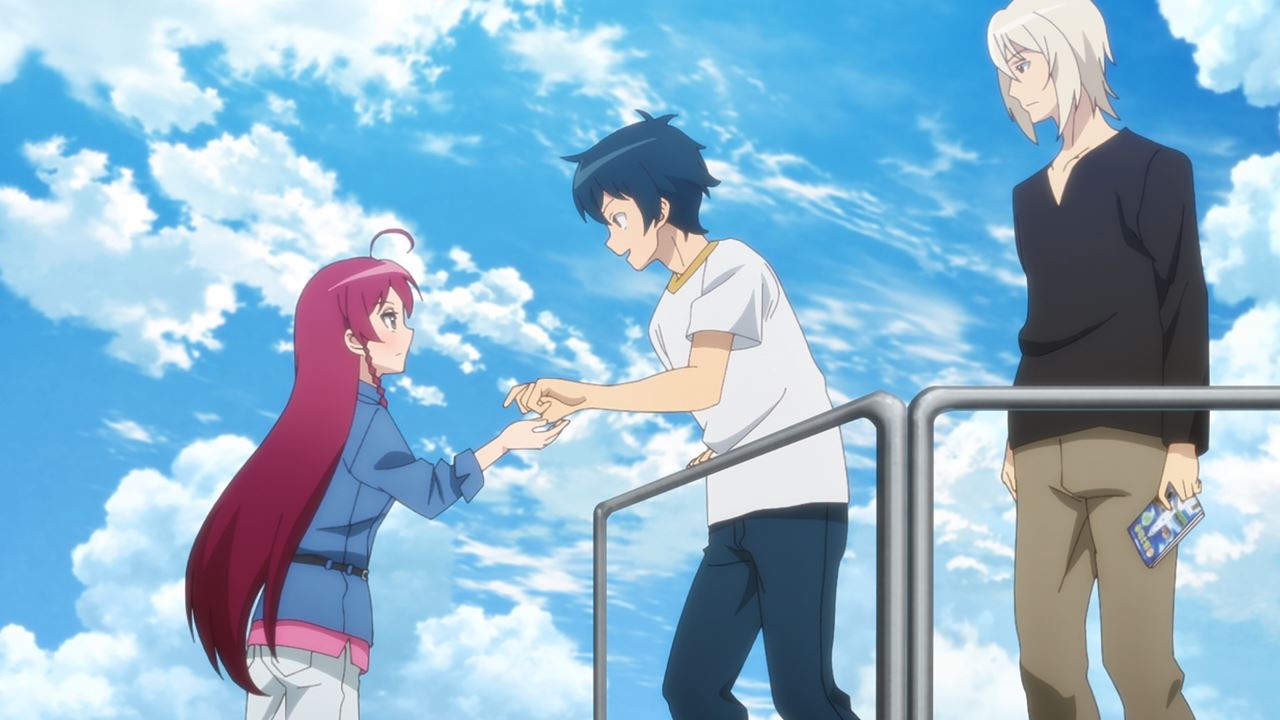 And that’s about it for this episode where it’s one hell of a beach episode. I mean, I can’t believe that a guardian angel like Amane Ohguro is protecting a small town from demons. Things will play out differently had Amane-san went full zealot and kill everyone who disturbs the peace in Choshi.

Anyways, I’ll see you next time where Sadao Maou and his friends will have to uncover the mystery surrounding the shards of Yesod.