Posted on September 5, 2022 by benigmatica 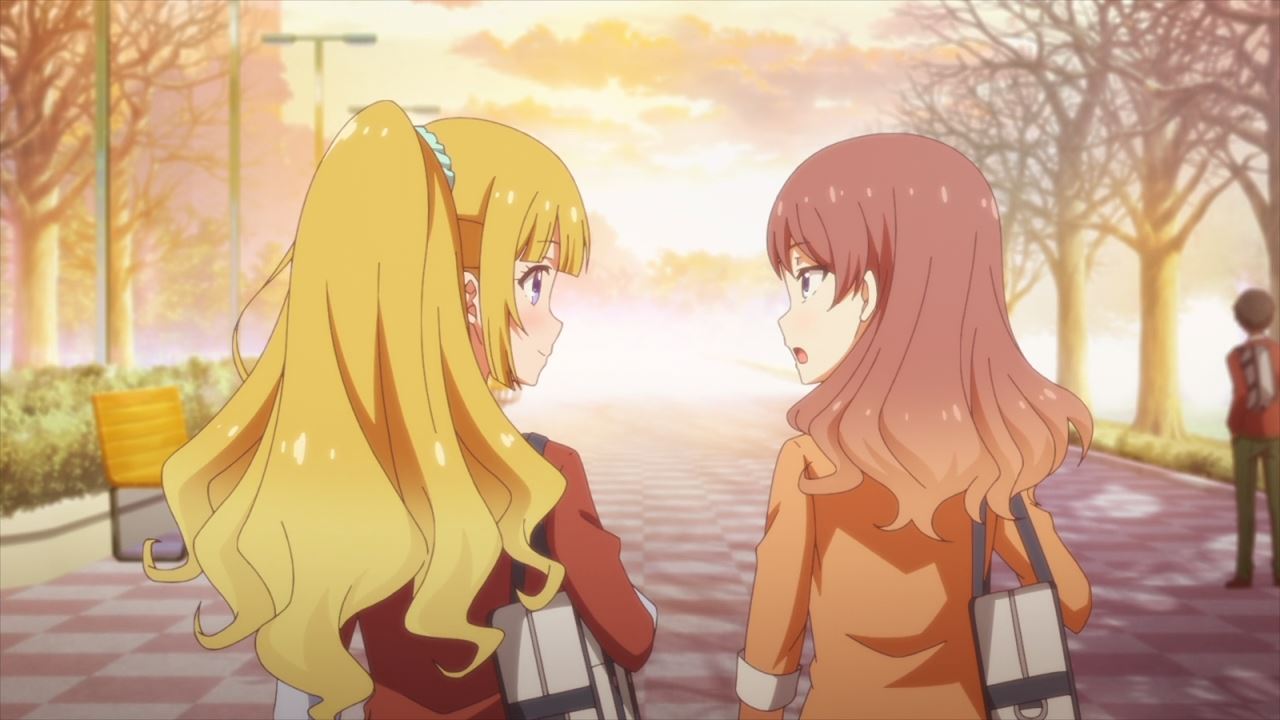 Well everyone, the brutal Paper Shuffle tests has finally ended as everyone in Koudo Ikusei Senior High School is celebrating the winter holidays.

C’mon, the likes of Kei Karuizawa and Maya Satou are eager to celebrate Christmas without any worries! 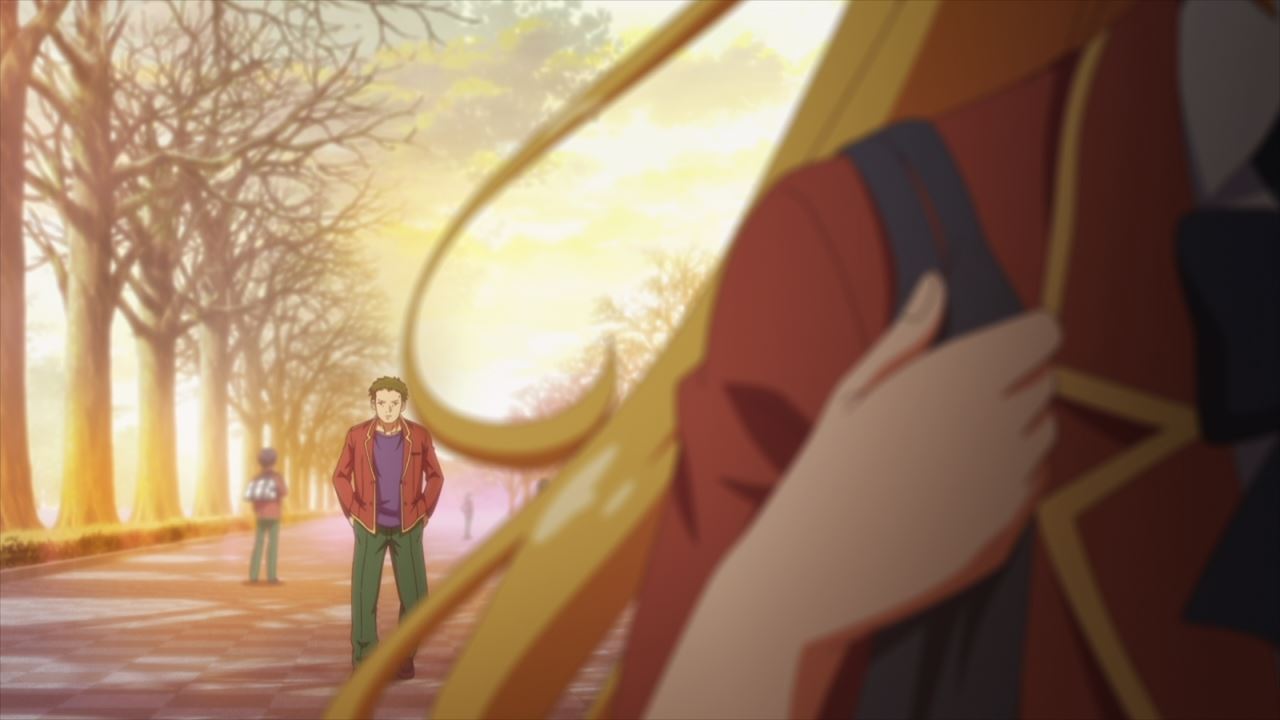 Never mind, I forgot that Kakeru Ryuuen and the rest of C-Class have becoming Grinches in this holiday season as they’re stalking everyone from D-Class.

Gotta say that Ryuuen is getting desperate in finding out the mastermind of D-Class as he can’t let that person ruin his plans. 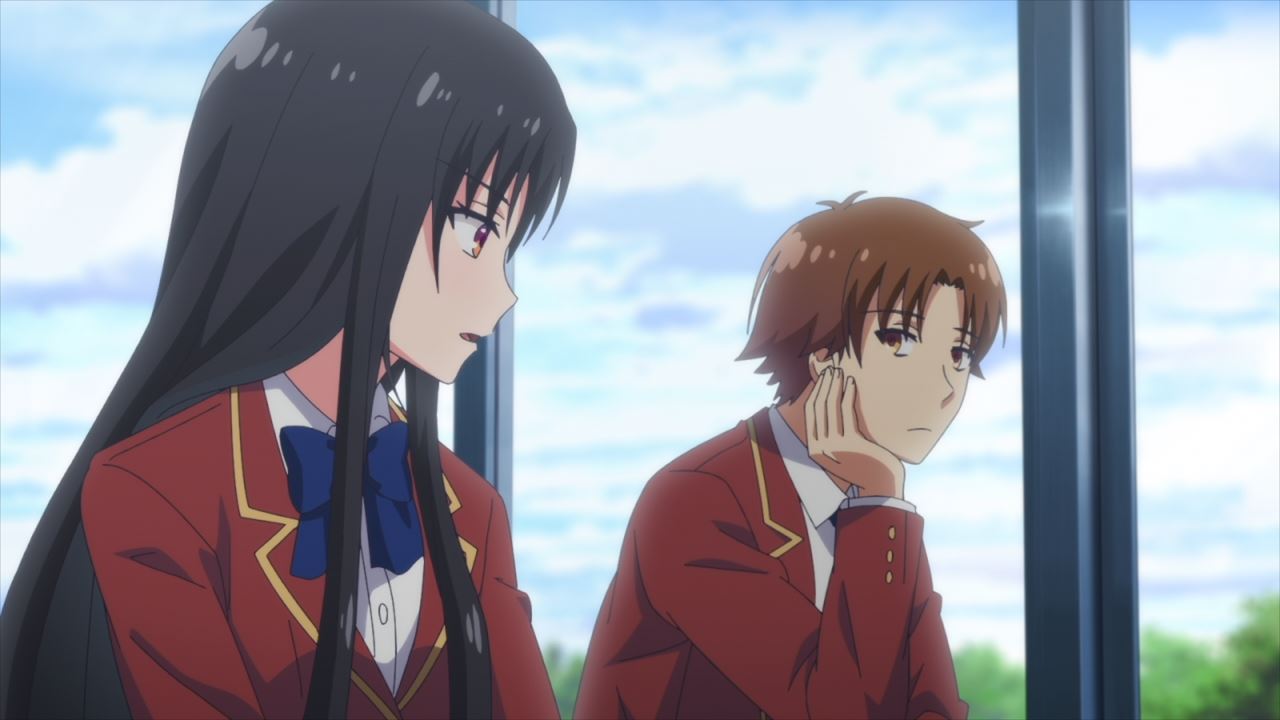 Oh yeah, some D-Class students are getting annoyed by their threats including Suzune Horikita where she feared that Kakeru Ryuuen and his cronies might target her again.

Of course, Horikita won’t be targeted anymore ’cause she’s not the true mastermind, although this puts Kei Karuizawa at a greater risk as she’s involved with the mastermind. 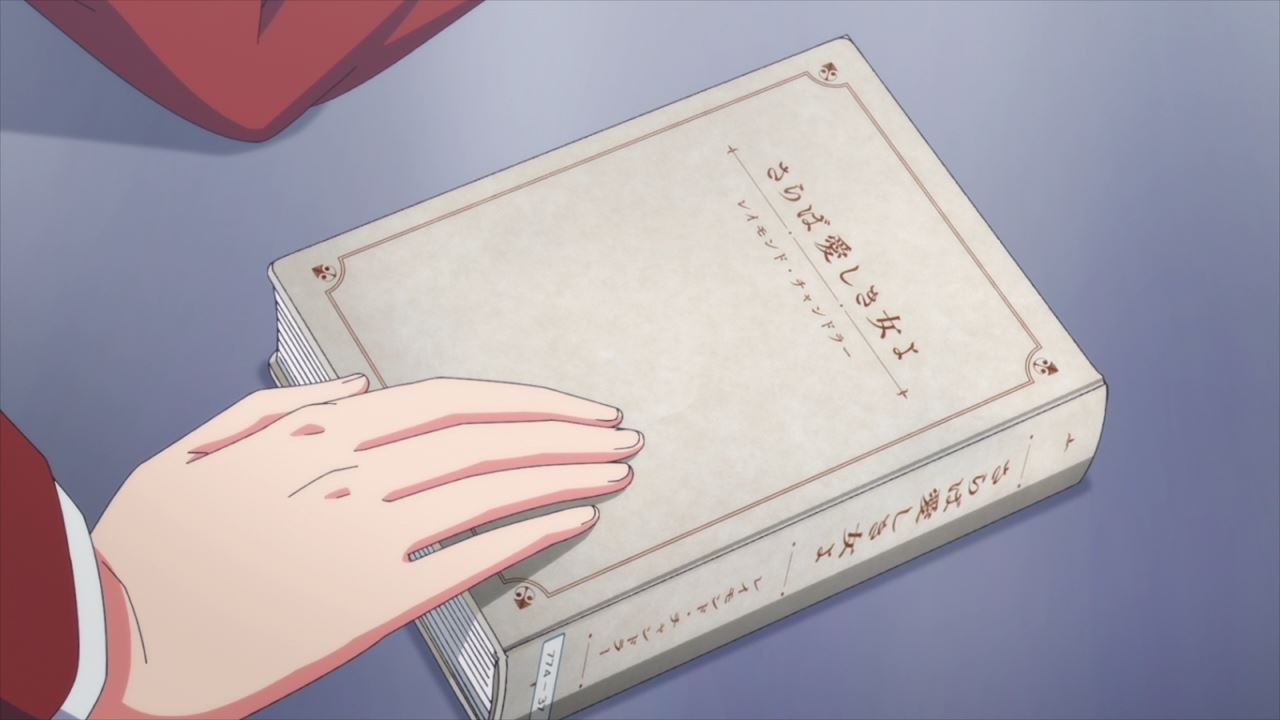 For now, Suzune Horikita asked Kiyotaka Ayanokouji to return this copy of “Farewell My Lovely” by Raymond Chandler to the library as Suzune doesn’t want to get a penalty for late returns. Geez Horikita, you’re making Ayanokouji into your personal gofer. 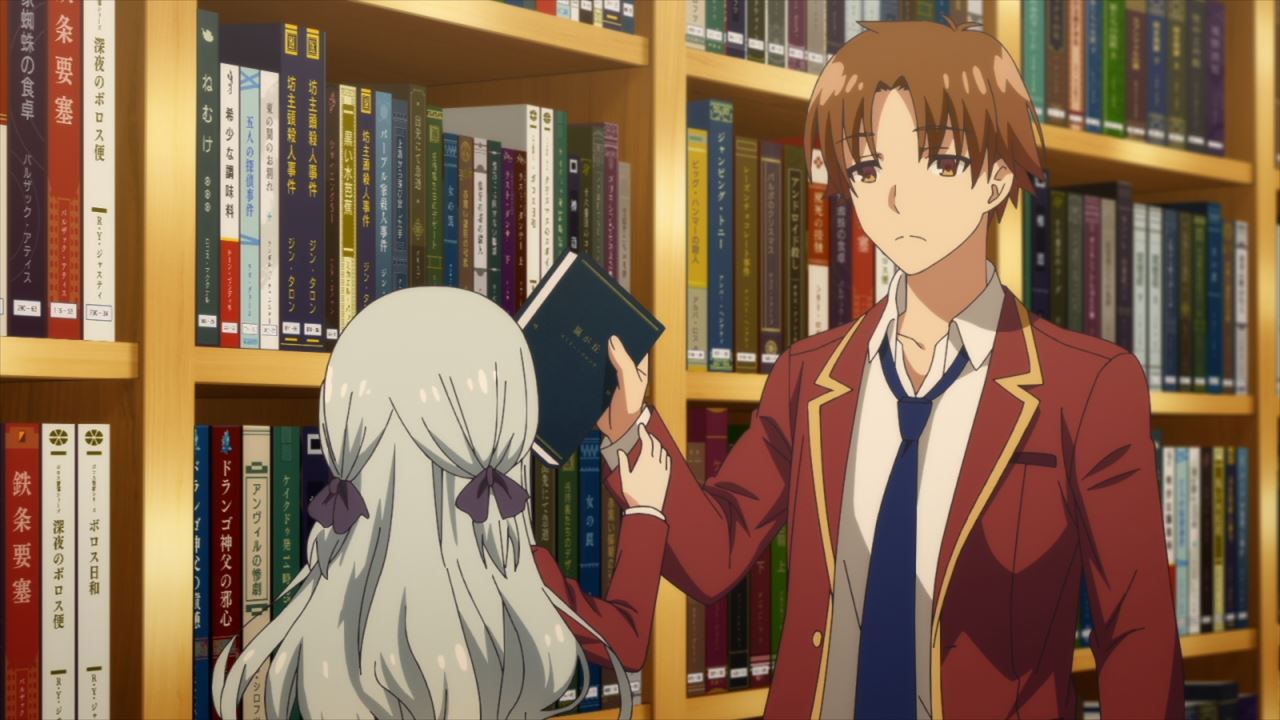 Anyways, Ayanokouji has arrived at the library where he’s about to return the book until Kiyotaka encountered a girl who tries to reach a book titled “Wuthering Heights” by Emily Brontë. 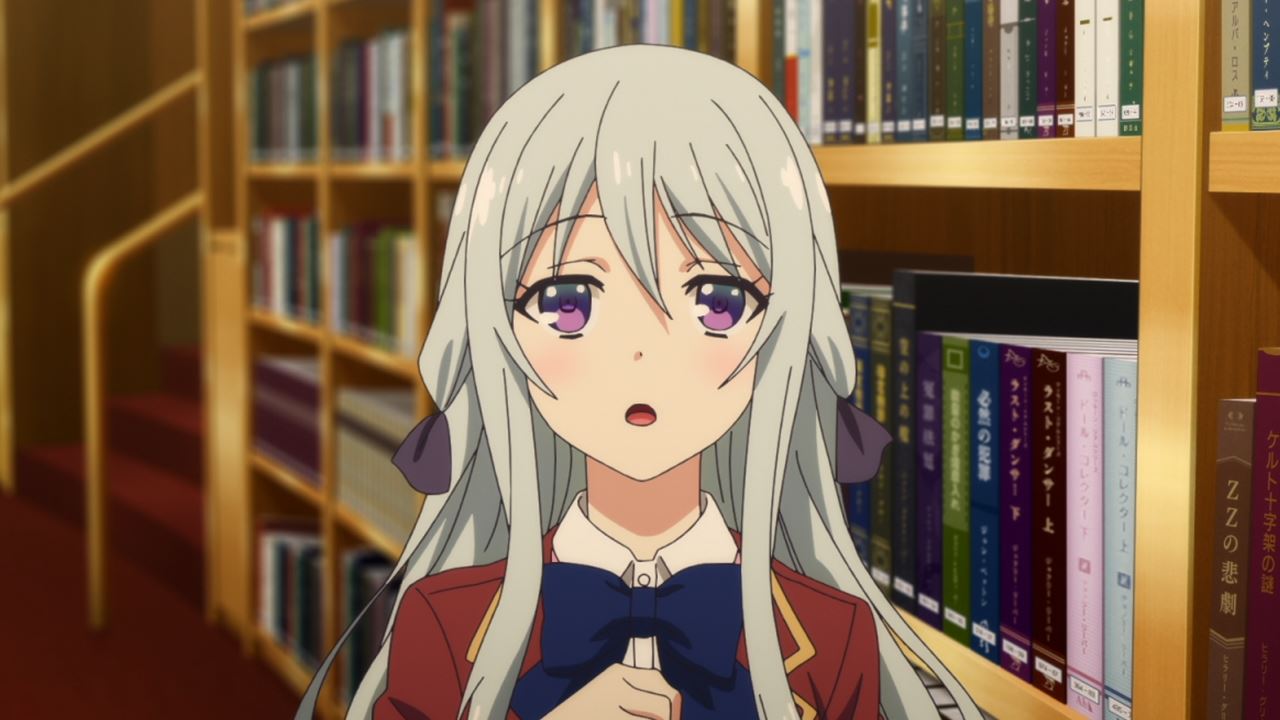 This is Hiyori Shiina where despite being part of C-Class, she’s not involved in Kakeru Ryuuen’s machinations as Hiyori would rather read mystery novels in peace.

Then again, I doubt that Hiyori Shiina is hands-off when it comes to crushing other classes as she might be Ryuuen’s second-in-command. 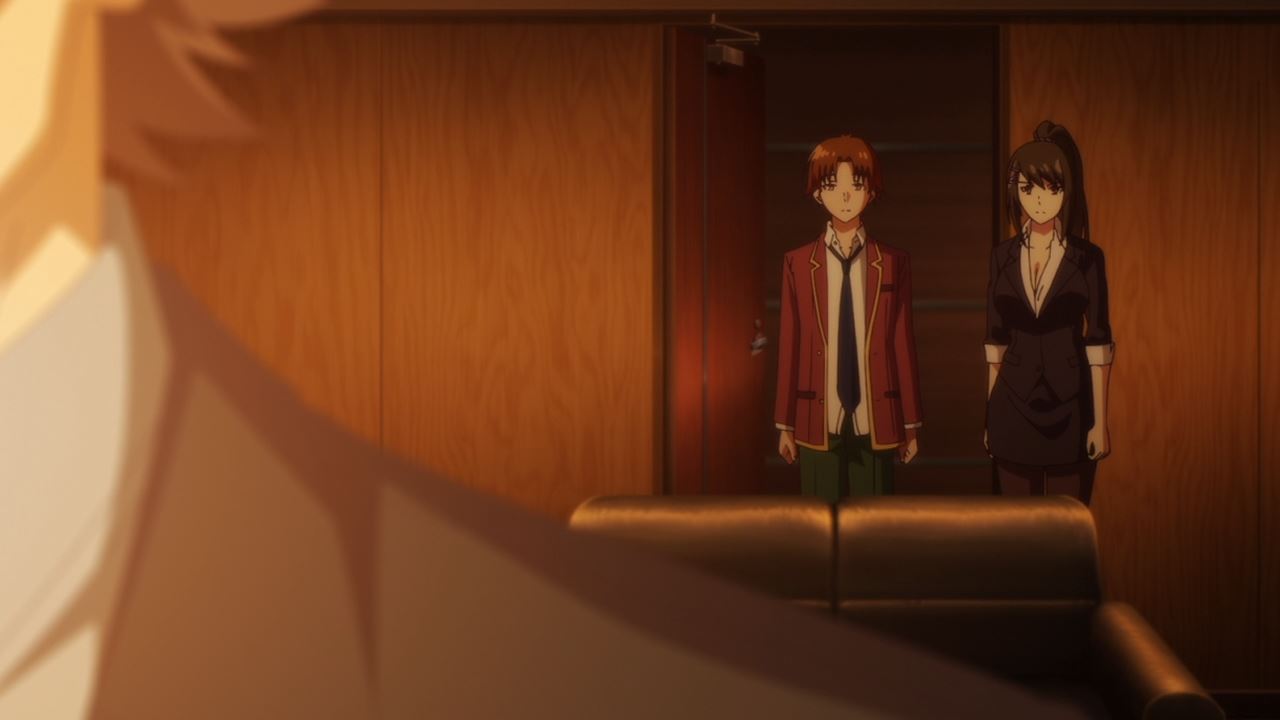 Now then, looks like Kiyotaka Ayanokouji got escorted by Sae Chabashira where he’ll meet a familiar person. 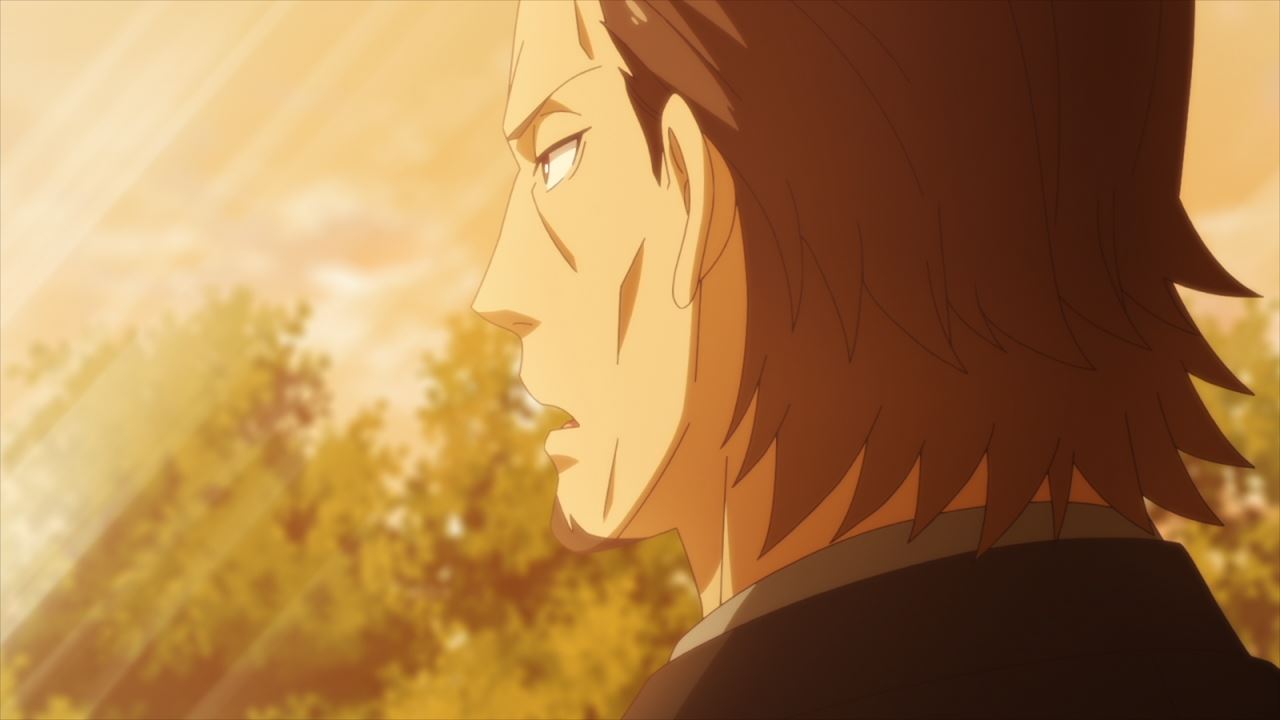 Said person happened to be Kiyotaka’s father where judging from his tone, he’s not really happy that his son enrolled to Koudo Ikusei Senior High School without his knowledge. In fact, letting his son enroll there is a waste of his talent. 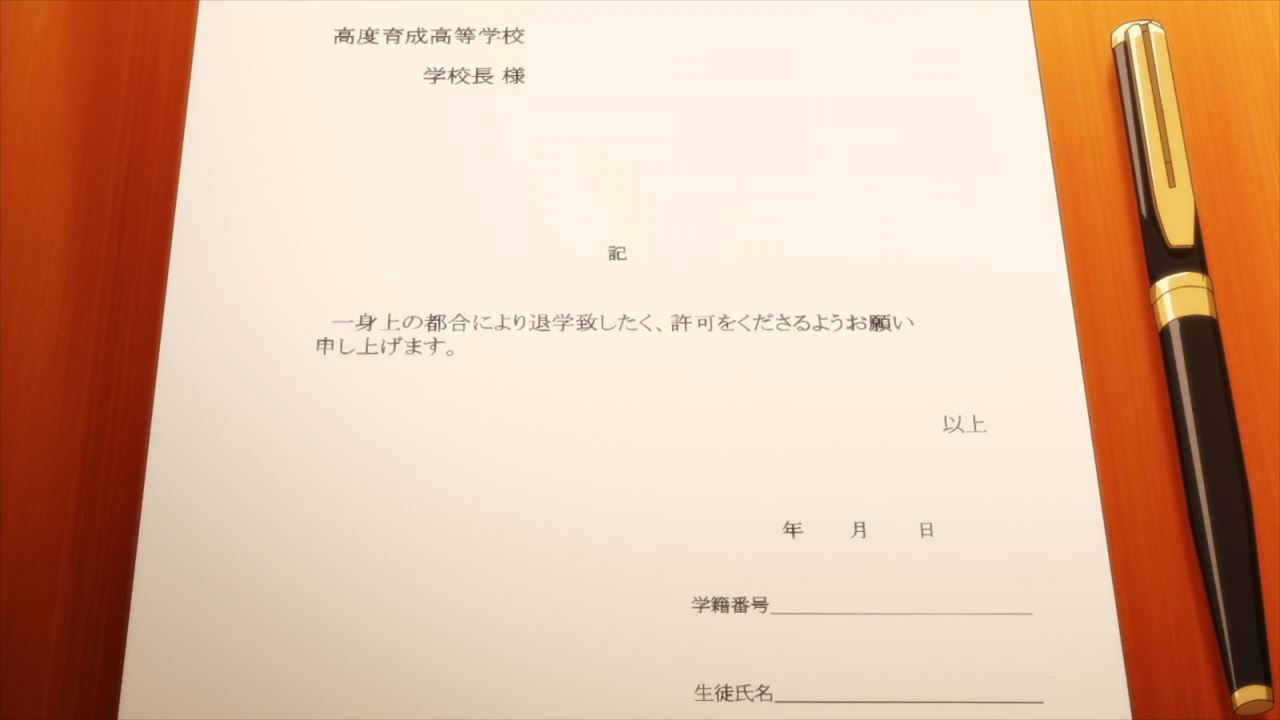 Thus, Professor Ayanokouji demanded his son Kiyotaka to sign the dismissal paper at once. No buts nor ifs as his orders are absolute! 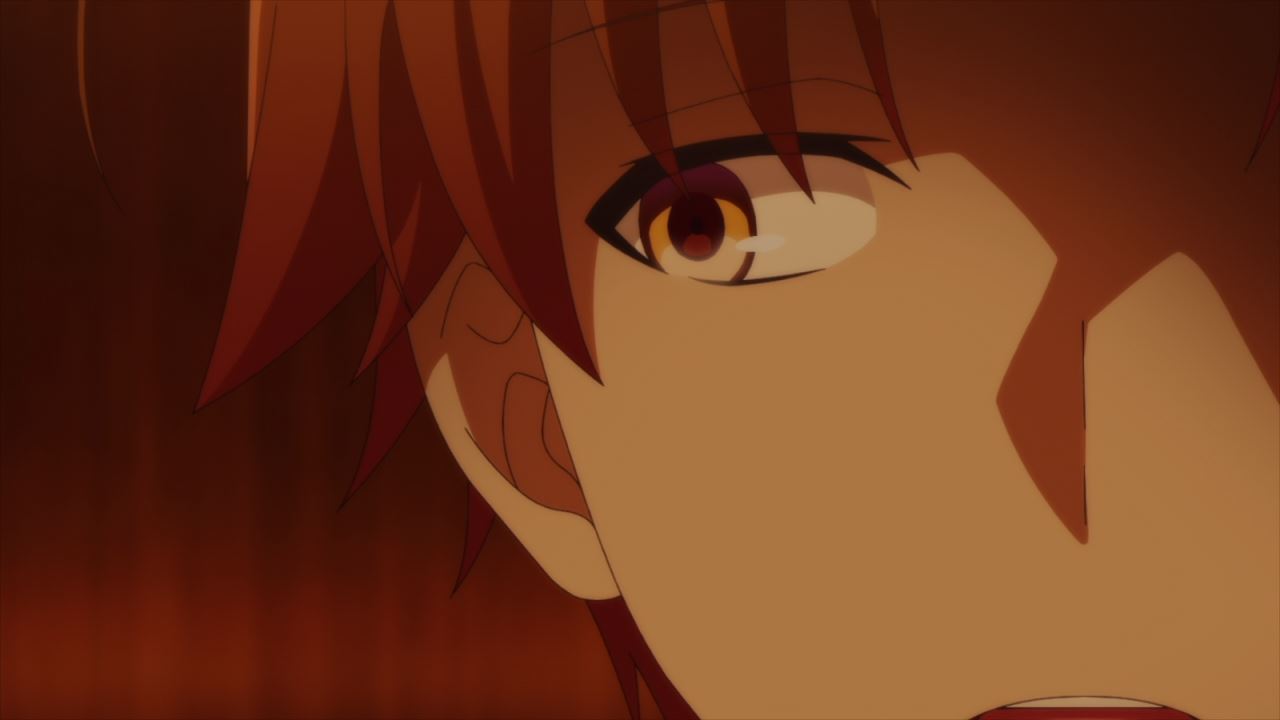 But speaking of Kiyotaka, he won’t sign the paper as he’s free to live on his own terms rather than having his life dictated by his father.

And by the way, he won’t return to the White Room no matter what his father says to him. At this point, I have a feeling that Professor Ayanokouji will force his son to sign the dismissal paper. 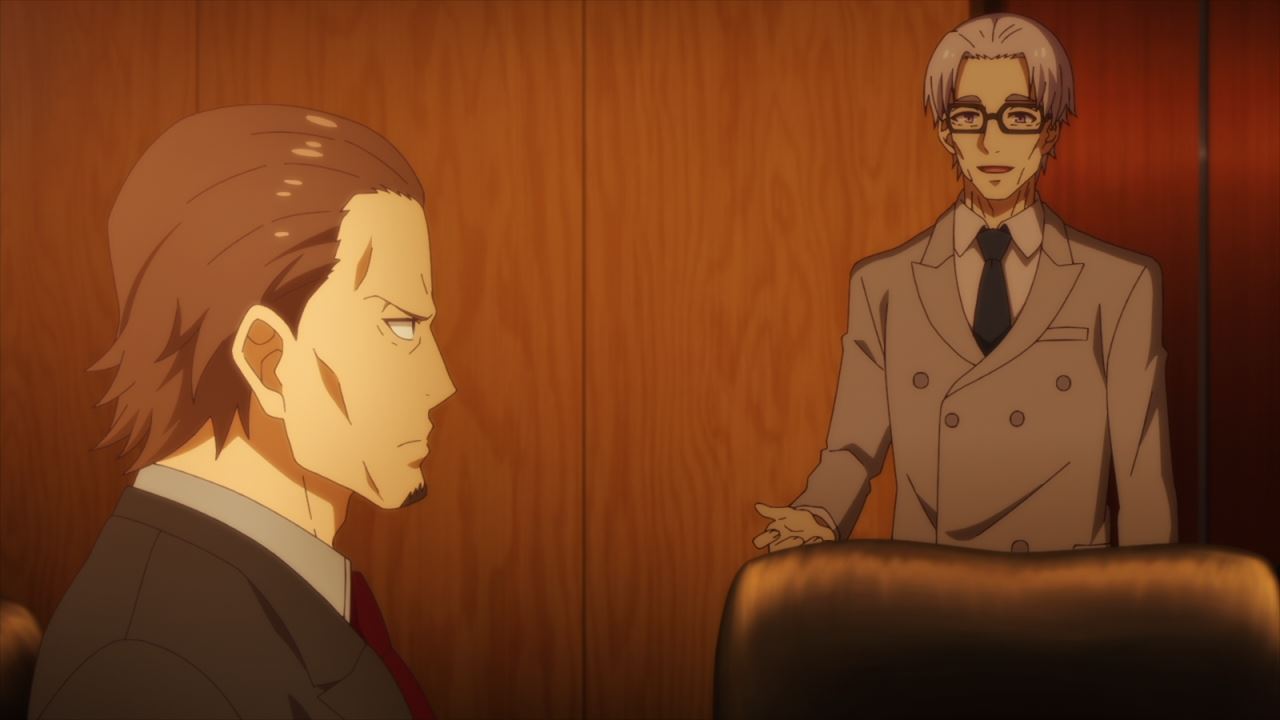 Well, looks like Kiyotaka’s father lost the battle but I have a feeling that he’ll be a stubborn parent until he gets what he wants. 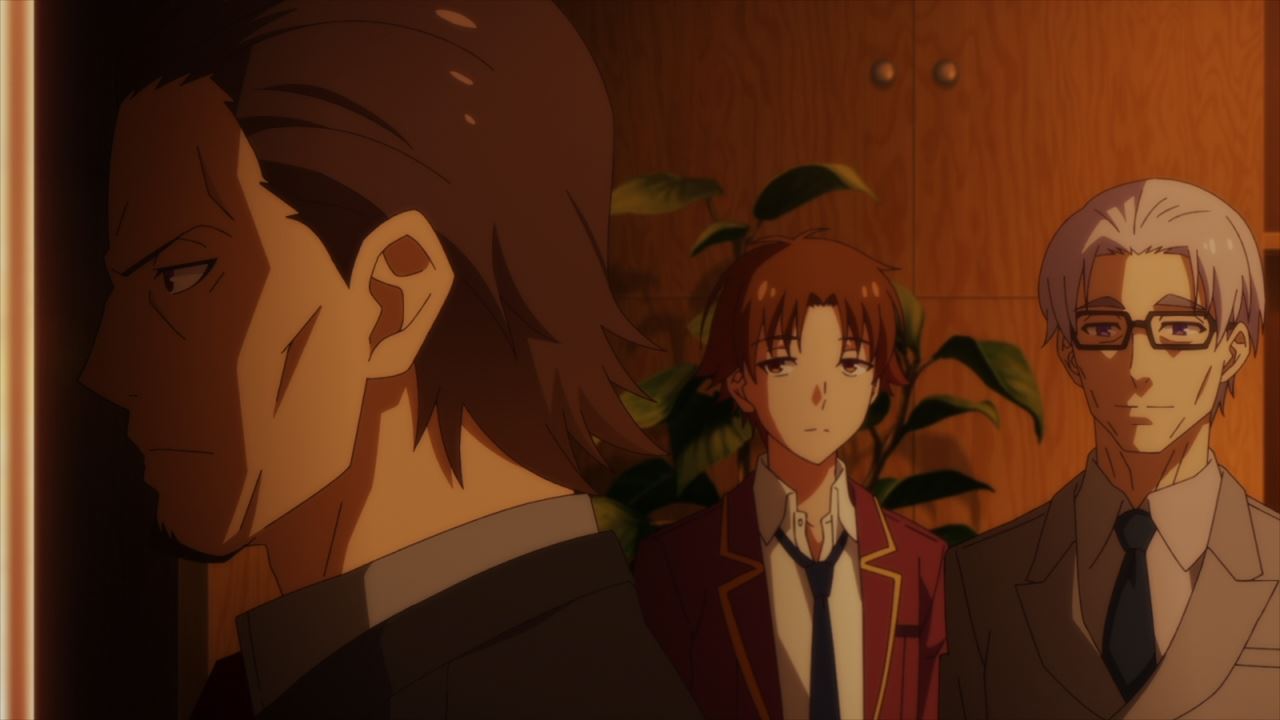 So while Professor Ayanokouji leaves the school empty-handed, something that’s bugging me regarding Chairman Sakayanagi.

Sure that he’s Arisu’s father, but Chairman Sakayanagi has some ulterior motives on why he created Koudo Ikusei Senior High School in the first place. 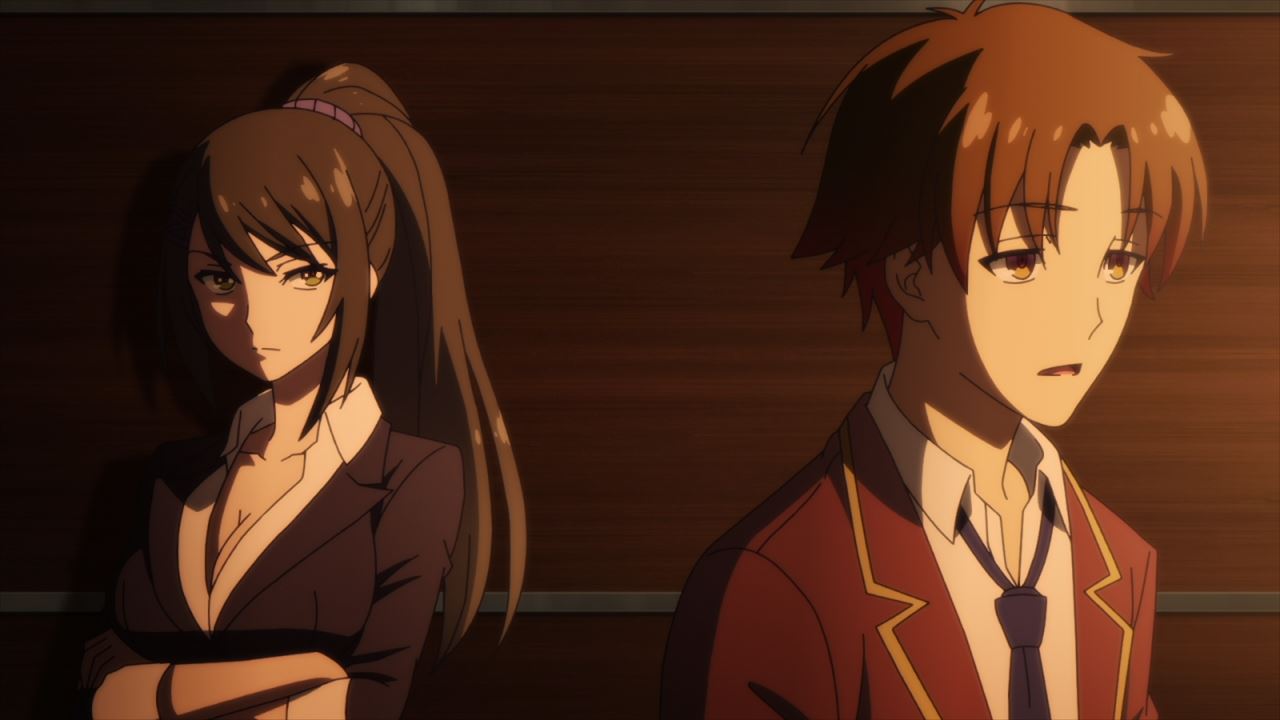 By the way, Kiyotaka told his teacher that he had enough of her charade as he knows that Sae Chabashira is using him to elevate the entire D-Class until they reach A-Class.

Thus, he has no obligation to help the likes of Suzune Horikita and other students in reaching a higher class for the next school year. 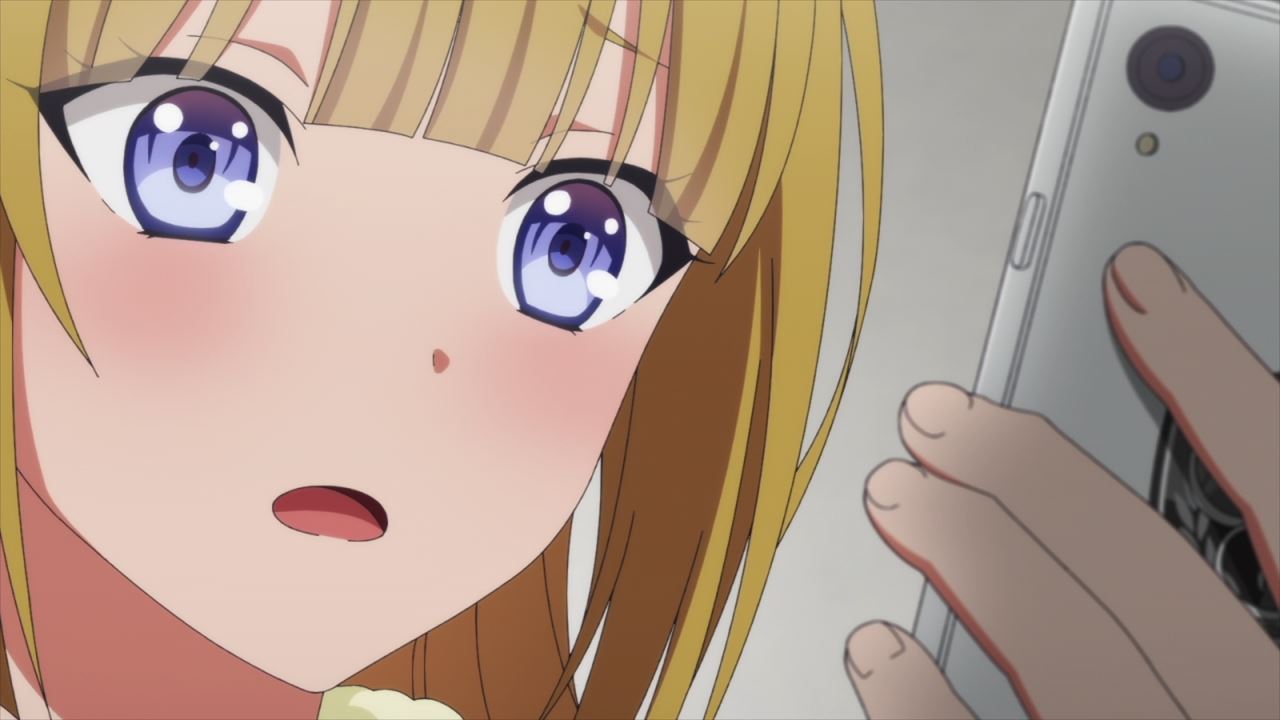 One last thing, it looks like Kiyotaka Ayanokouji told Kei Karuizawa that this will be the last time they talk to each other on the phone.

He told Kei to delete their messages and call logs except for that emergency address, although I wish Kiyotaka will keep that scathing photo of the C-Class students bullying Kei back at the cruise ship. 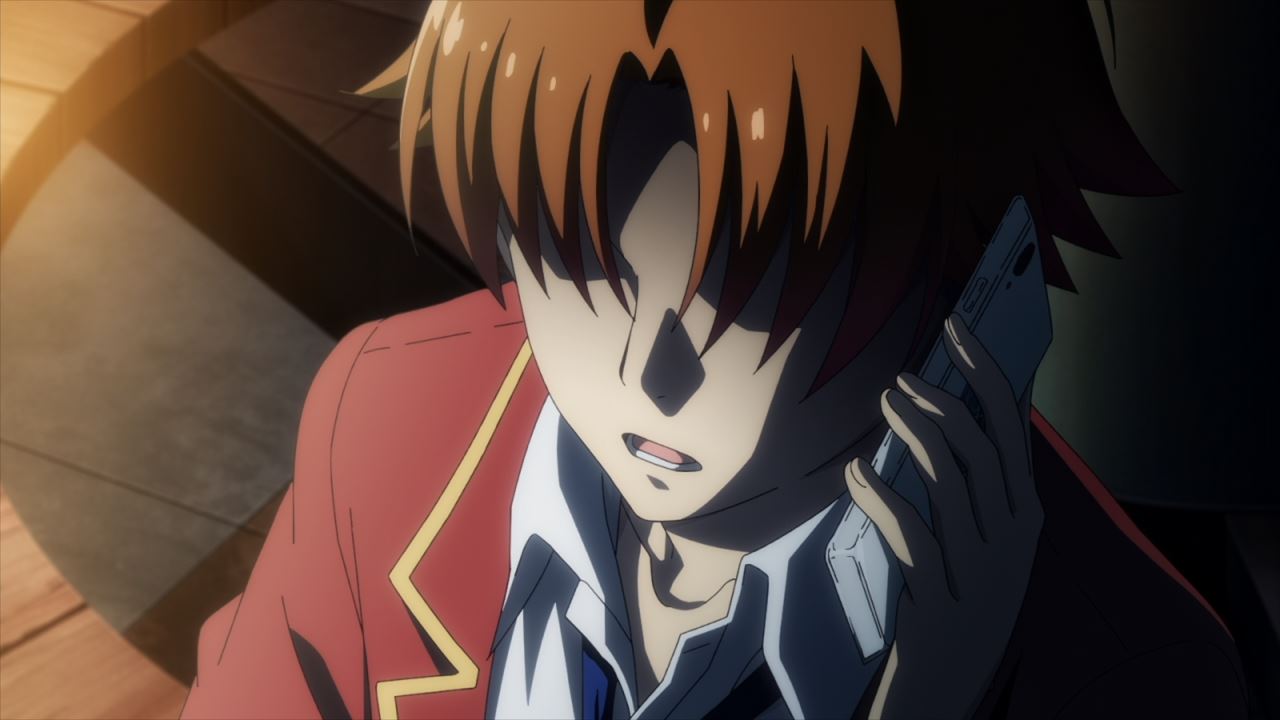 But that’s about it for this episode where I must say that it was a close call for Kiyotaka Ayanokouji. I mean, being forced to sign the dismissal paper by his own father is despicable, although I’m sad that he’s already cut ties with Kei Karuizawa.

Now then, I have a feeling that Kakeru Ryuuen and his cronies are making their first move against Karuizawa on the next episode. Let’s hope that Ayanokouji would reconsider his decision to stay away from Karuizawa as she’s a vulnerable girl.