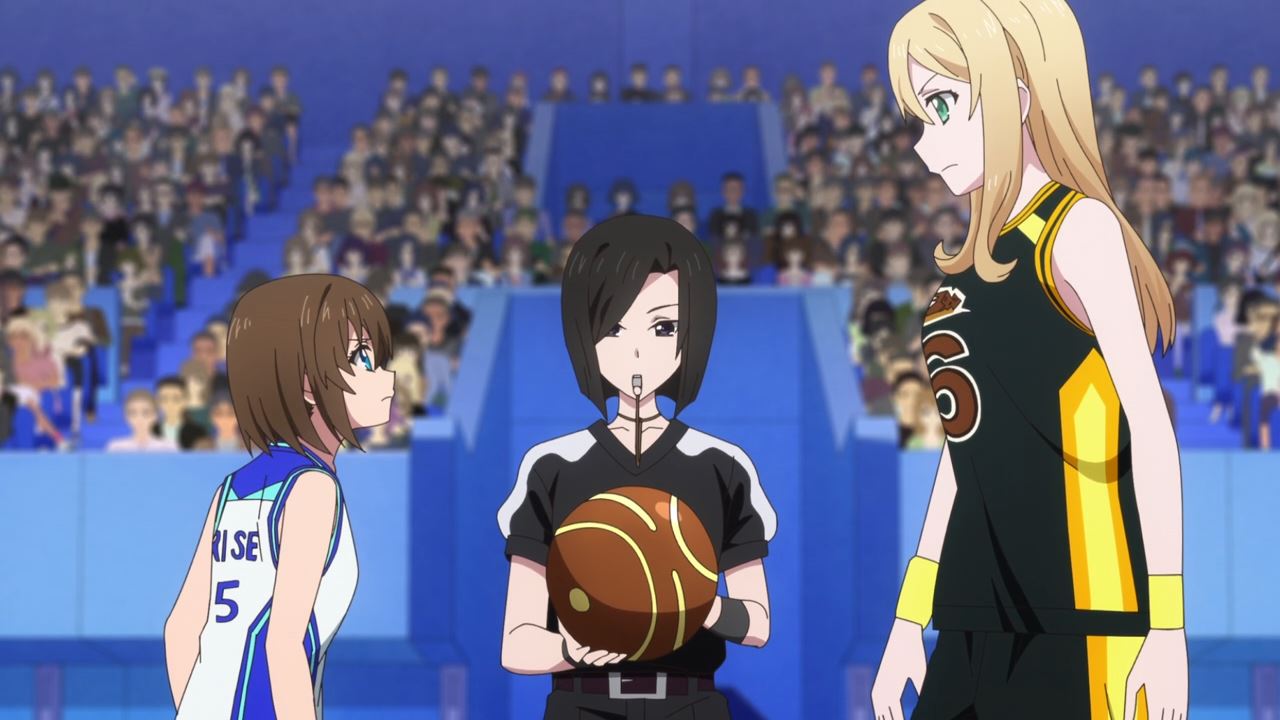 Here it is, the Kanagawa Prefectural finals match between the newcomers Rise and the two-time Extreme Hearts champion May-Bee. The winner will earn a place in the national tournament while also have a chance to perform live after this basketball match.

Speaking of Rise, they have Michelle Jaeger and Ashley Vancroft from Snow Wolf as support in case something bad happens to Hiyori Hayama and her teammates. But speaking of Hiyori, she’ll have a tip-off against May-Bee’s tallest player Emma Baily. 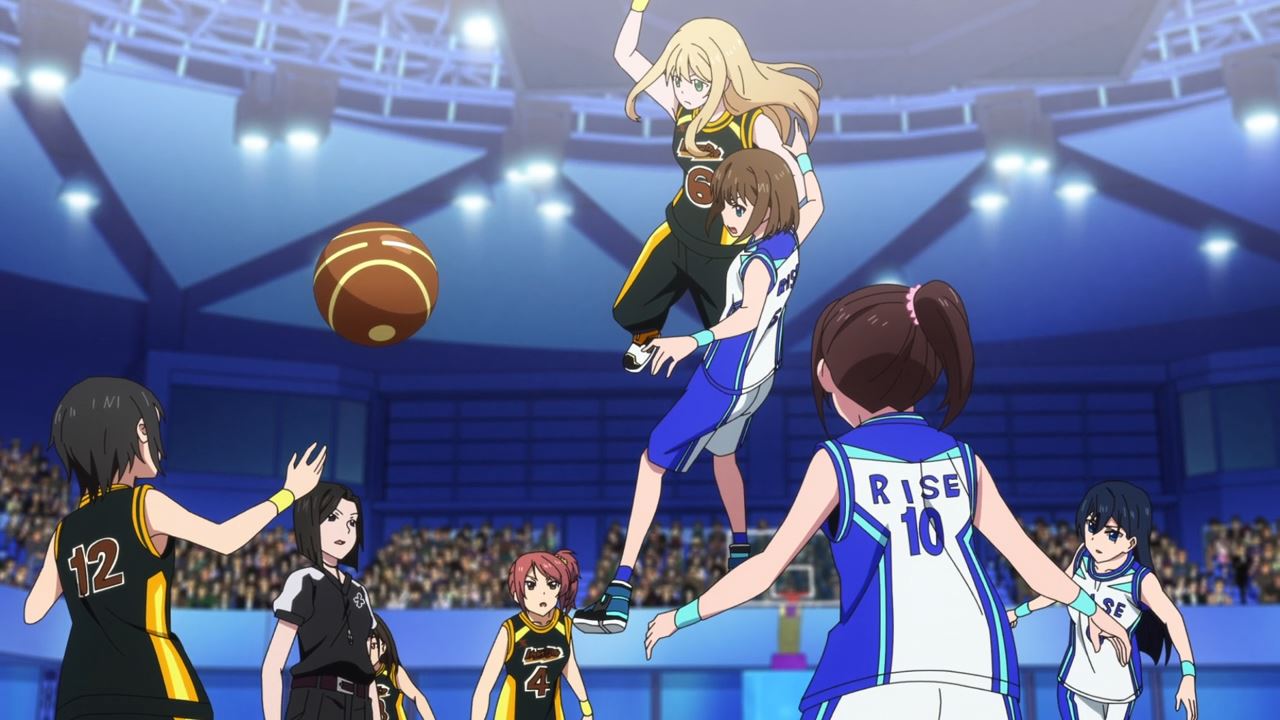 Unfortunately for Hayama, Emma’s imposing height wins out as May-Bee possesses the ball. Well everyone, this is gonna suck for Rise!

And seriously, Hazuki Sakurai and the rest of May-Bee will steamroll the newcomers with 30 points or more in this final match. It’s gonna be painful for Hiyori Hayama and her friends! 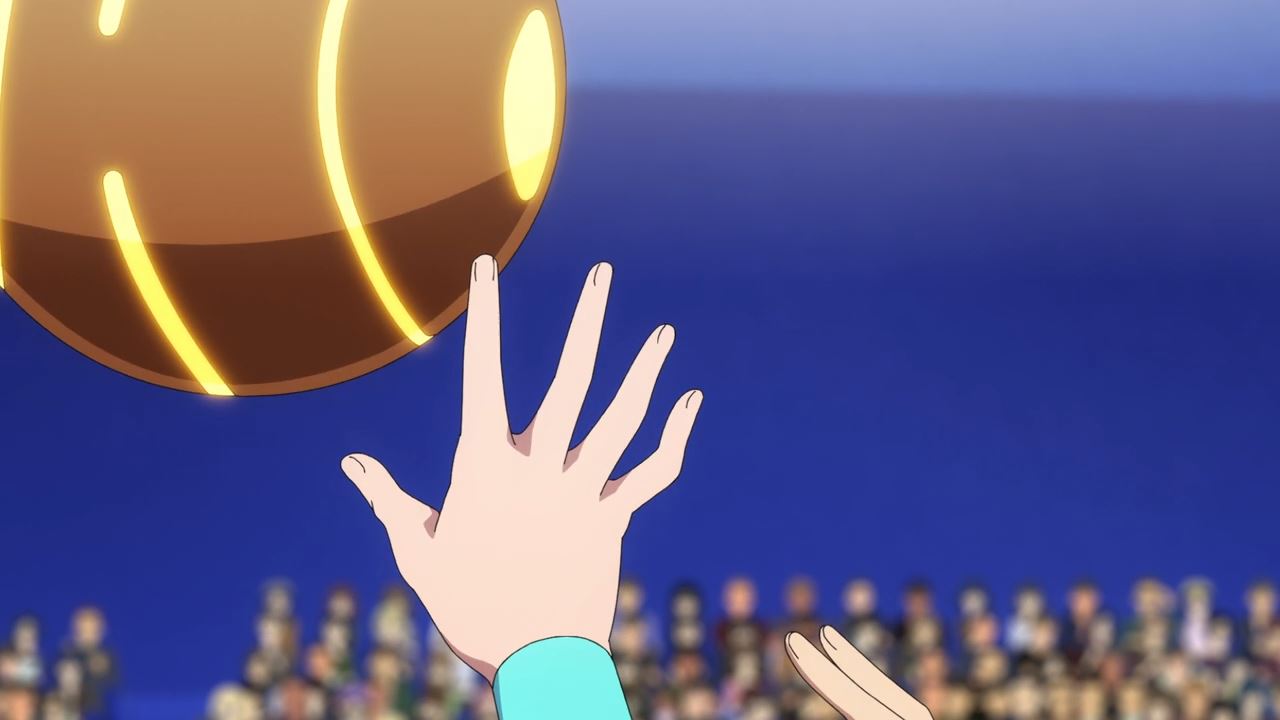 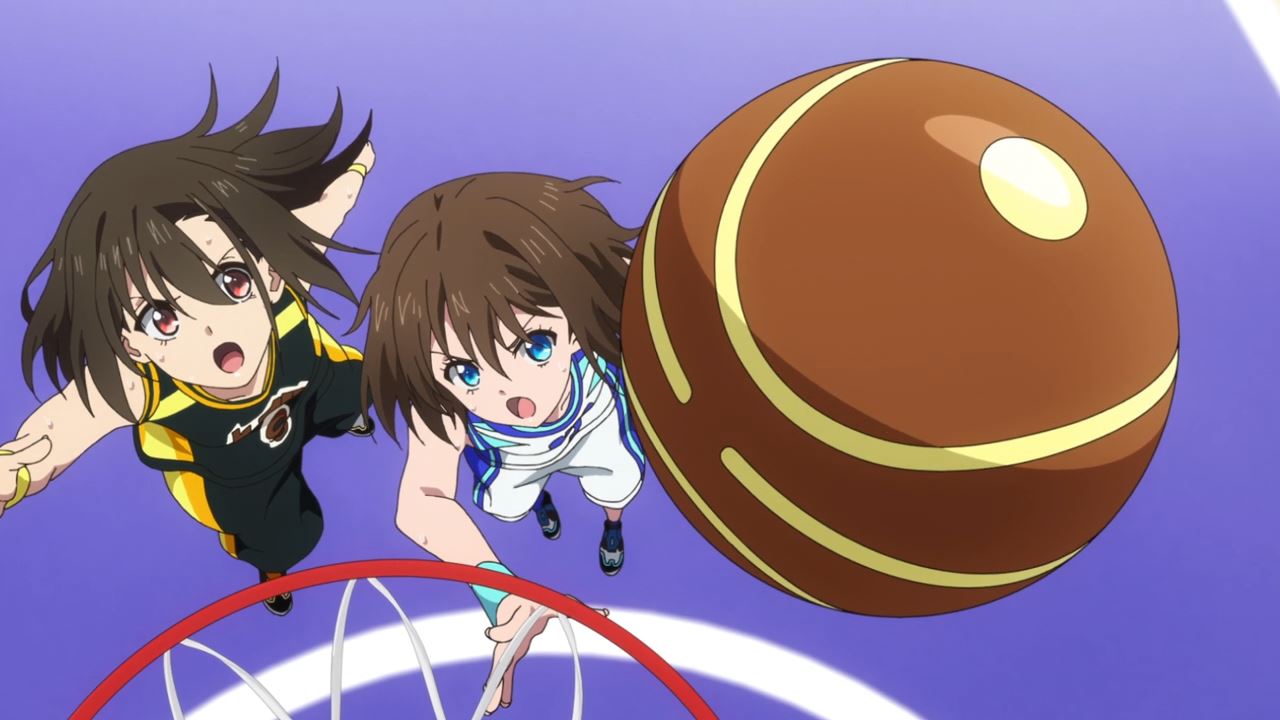 Well, they won’t give up so easily as Hiyori and the rest will continue to fight until Rise can overcome a large score deficit against the champion. 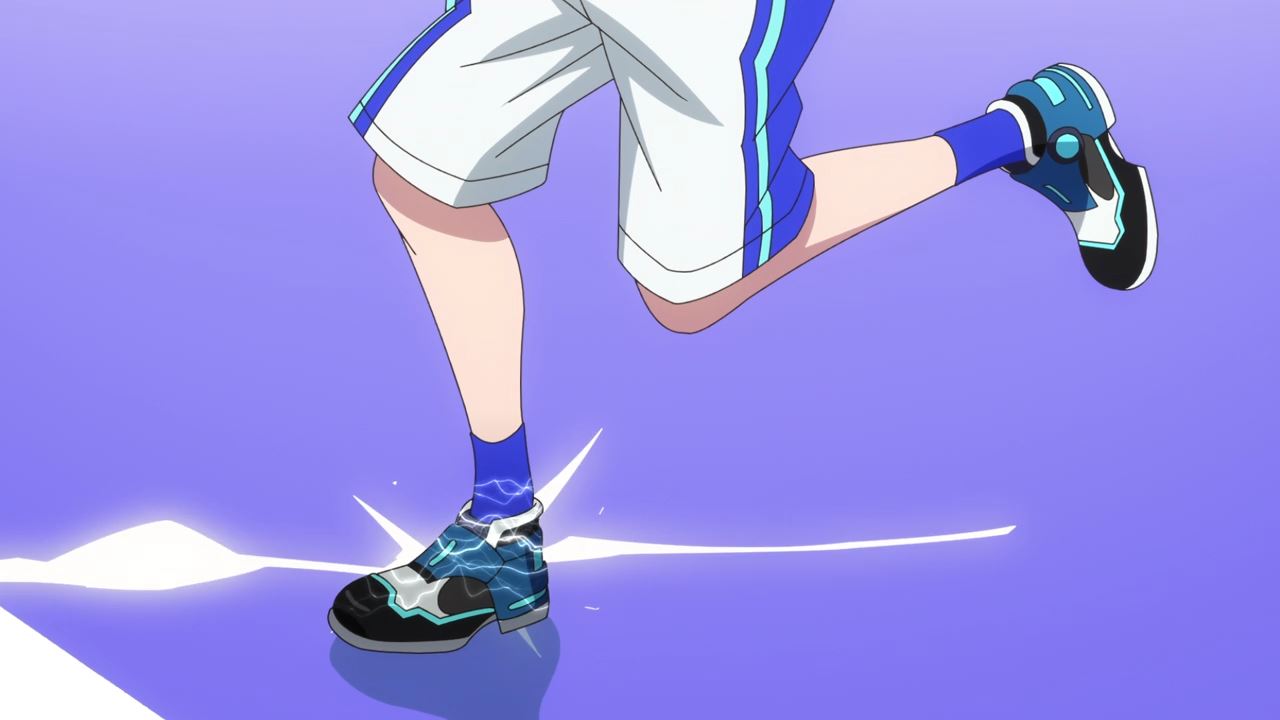 Then again, I’m worried about Hiyori Hayama as she pushed herself too much that Hiyori accidentally broke her right foot upon landing. 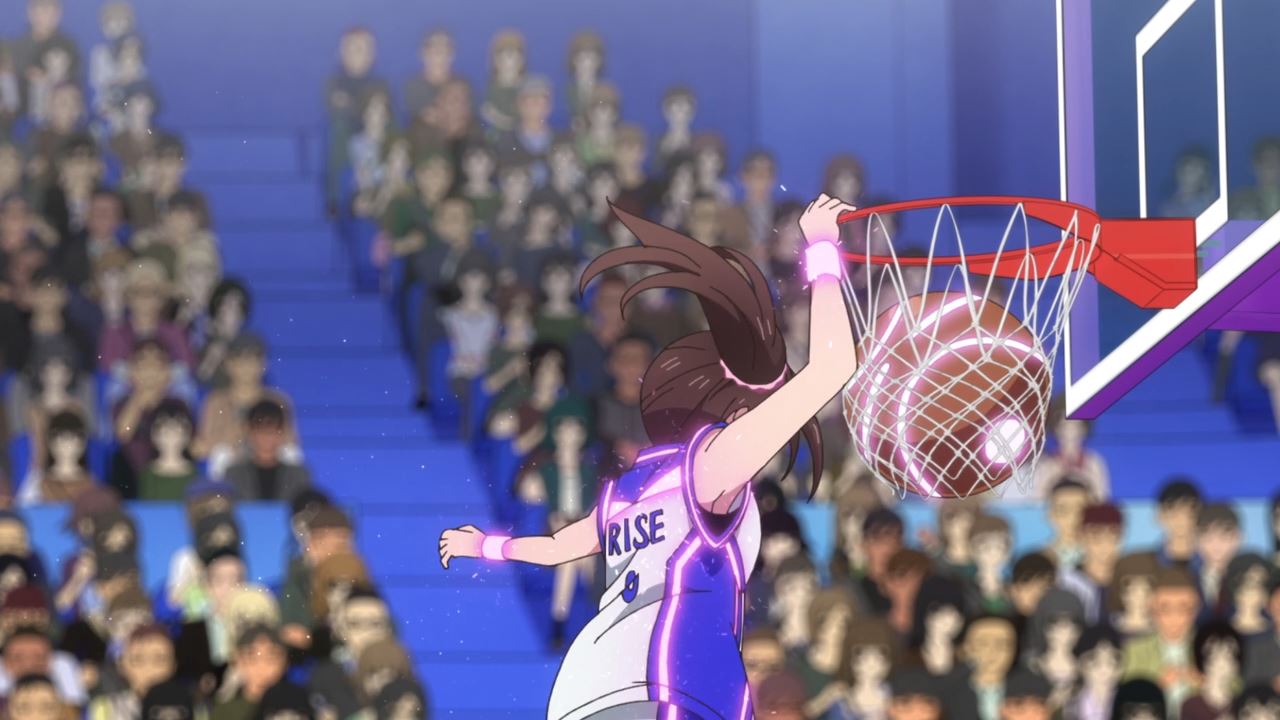 But regardless, Hayama continues to play with her teammates as Rise managed to catch-up with May-Bee. Gotta admit that they’re going all out against the defending champion. 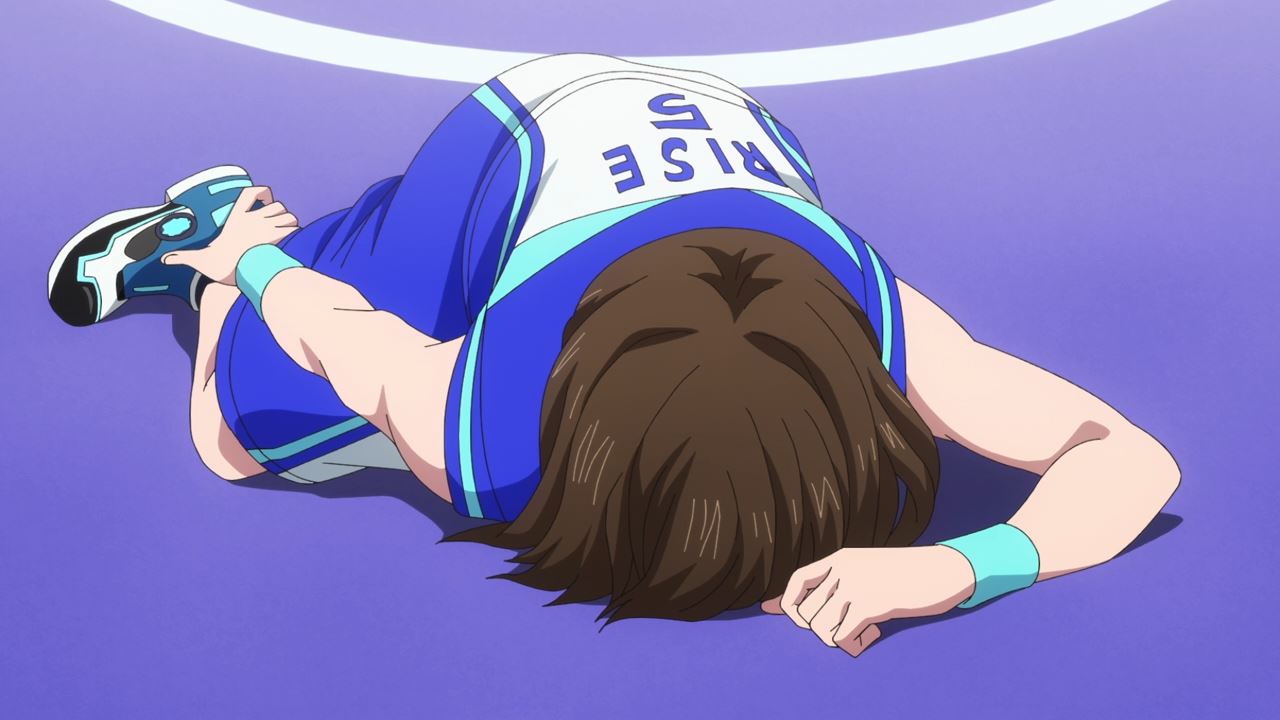 Sadly, it looks like Hiyori’s right foot injury has worsened that she fell to the ground. At this point, she’ll be subbed out by one of Sumika Maehara’s robots as Hayama can’t return with a broken foot. 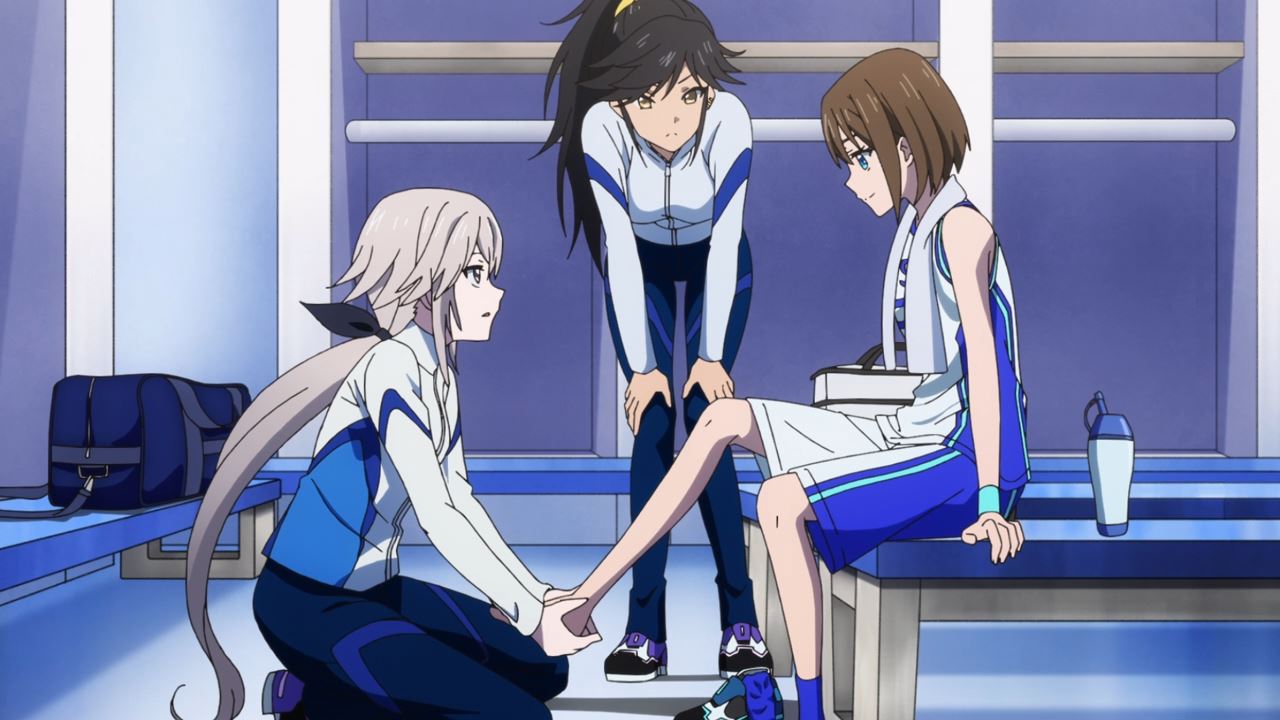 However, it appears that Hiyori Hayama wants to play the entire match till the end. Thus, Michelle Jaeger will have to alleviate the pain by wrapping her foot with bandages.

Of course, Michelle’s first aid treatment is just temporary as she warned Hiyori not to push herself further. Otherwise, Hiyori can’t play sports nor perform on stage with a right foot that’s beyond restoration. 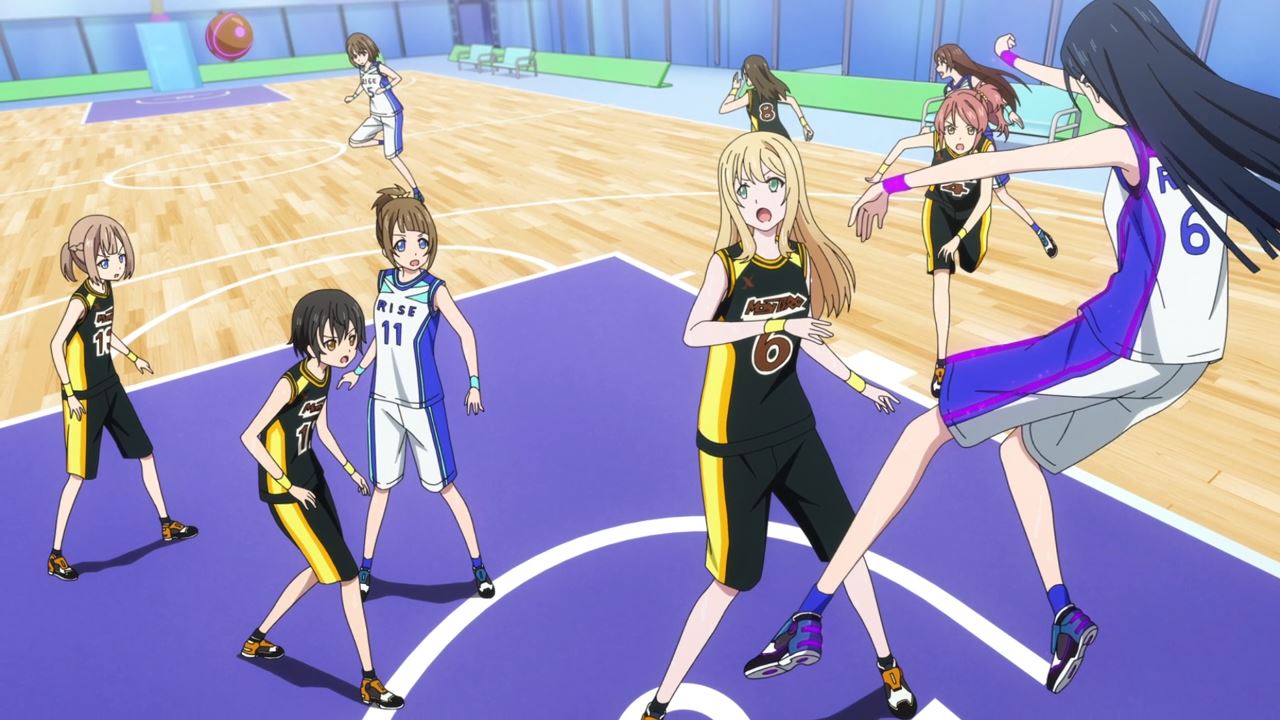 Now then, we’re onto the final stretch as Rise and May-Bee are all tied up. This is gonna be an intense moment on this episode!

For the defending champions, Hazuki Sakurai and the rest can endure it out to win their match. But for the challengers, they can’t afford to let this match go into overtime as Hiyori Hayama and her friends will finish it. 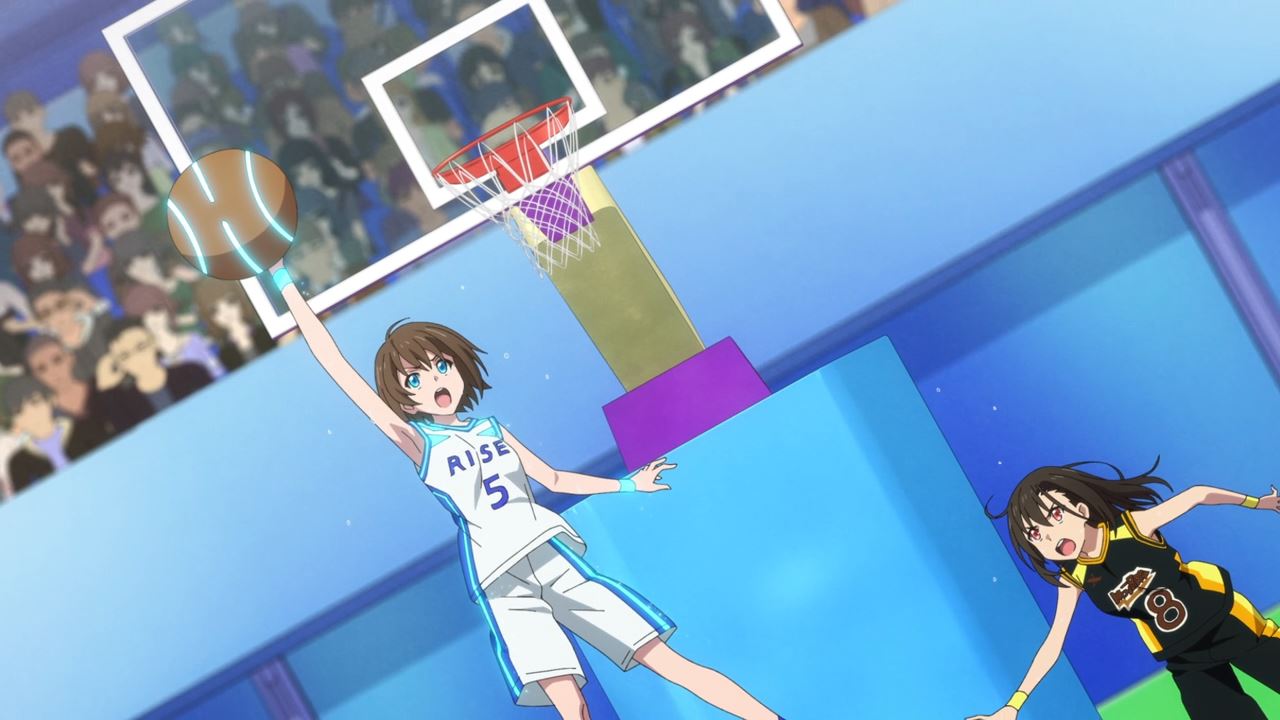 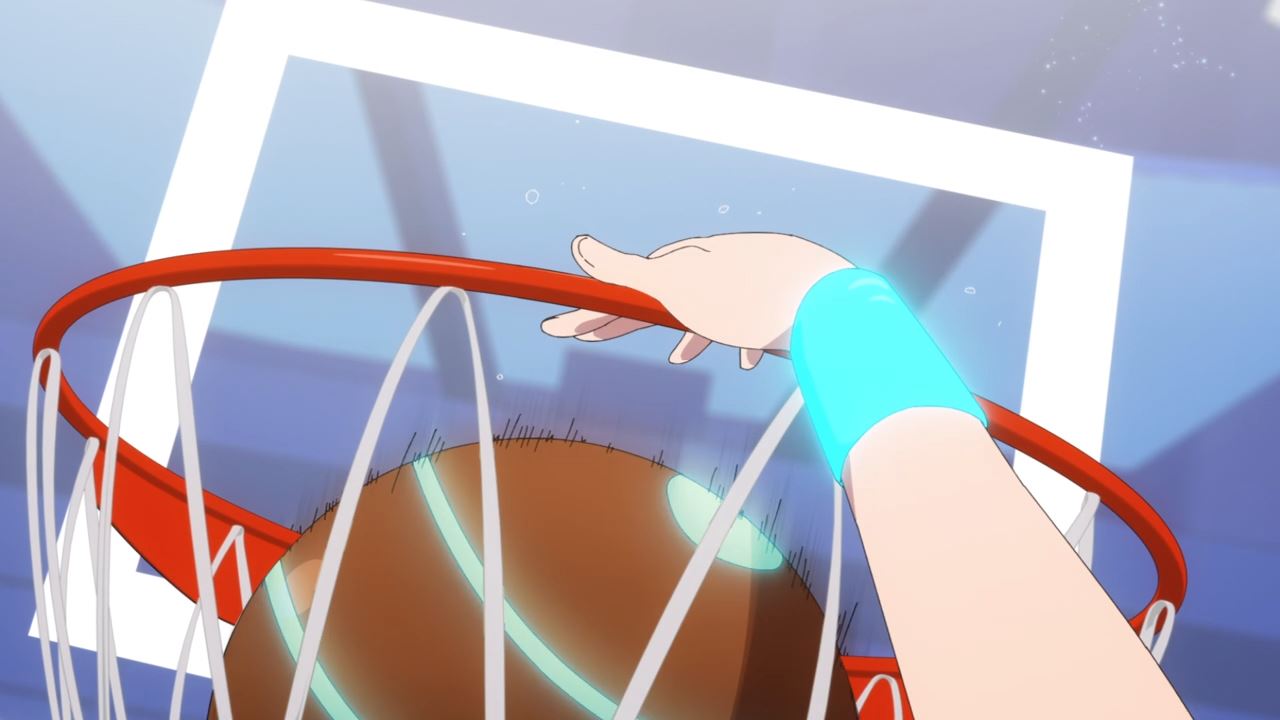 And so, it’s up to Hiyori Hayama where despite having a broken foot, she’s going out swinging with a slam dunk at the last second. Well everyone, looks like this intense basketball match has finally ended. 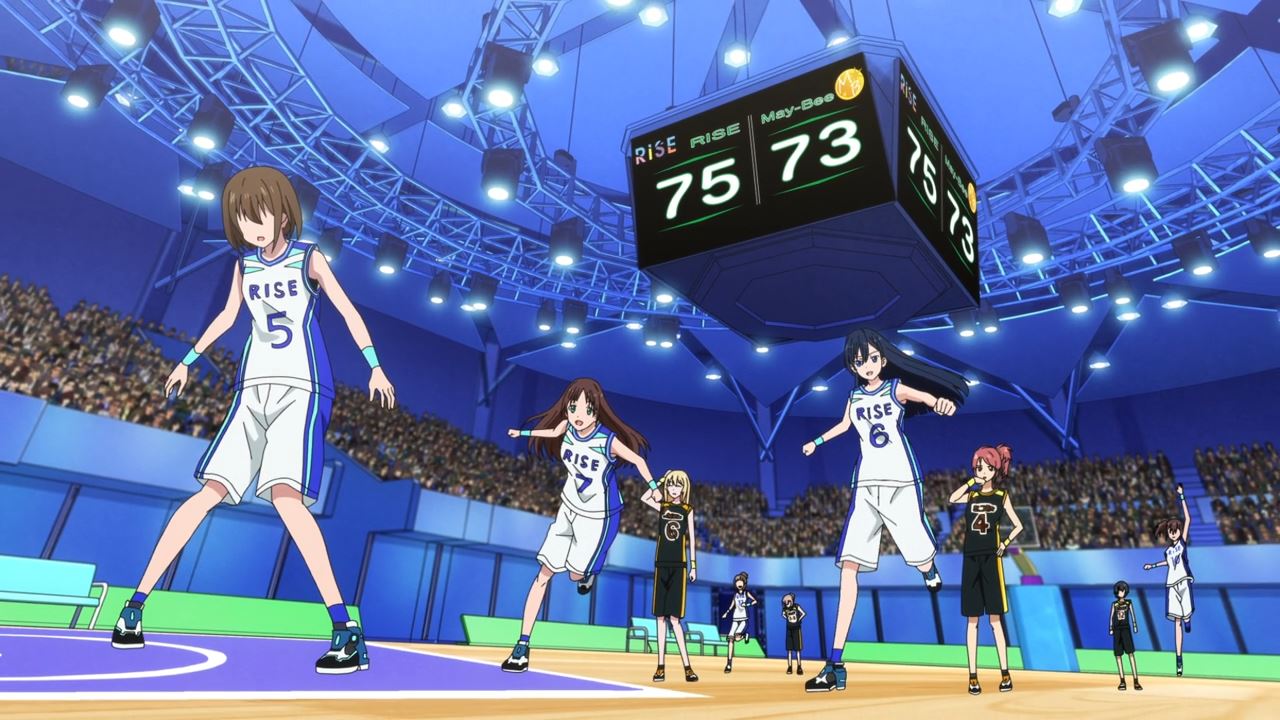 Not only that, but Rise managed to do the unthinkable by beating the defending champions May-Be with the score of 75-73. An amazing performance by the newcomers as Rise became the Kanagawa representative for the Extreme Hearts national tournament.

Now, I expect Rise to lose due to their inexperience in playing against stronger teams like May-Bee, but I’m surprised that Hiyori and the rest managed to beat the odds against them. Well, it’s all thanks to her teammates where they’re quite strong in their respective sports, from Saki Kodaka being the soccer ace to Yukino Tachibana’s batting skill which compliments her kenjutsu training regimen.

Of course, beating the defending champions is just the beginning for Hiyori Hayama as she’ll need to recover in order to prepare herself and her teammates for the upcoming national tournament. 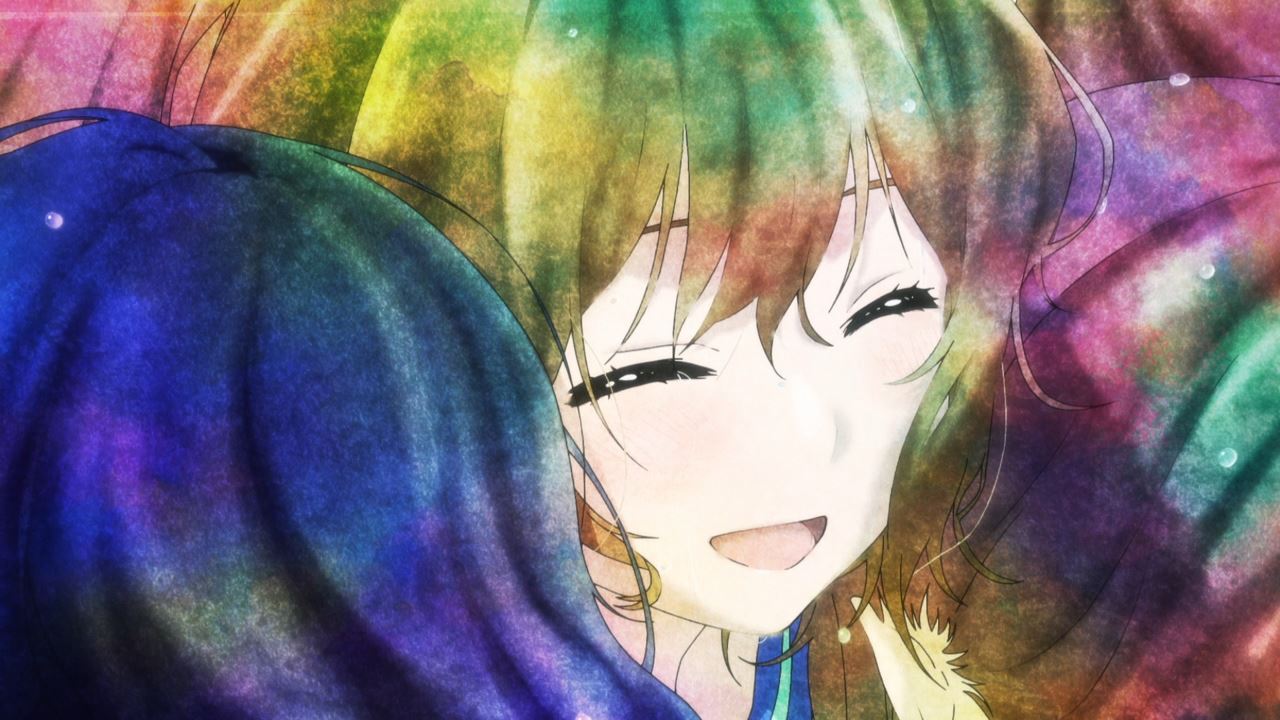 For the time being, Hiyori and the rest are celebrating their triumph where they really deserve it!

Anyways, tune in next time for the final episode where it’s time for Rise to perform live across Japan.