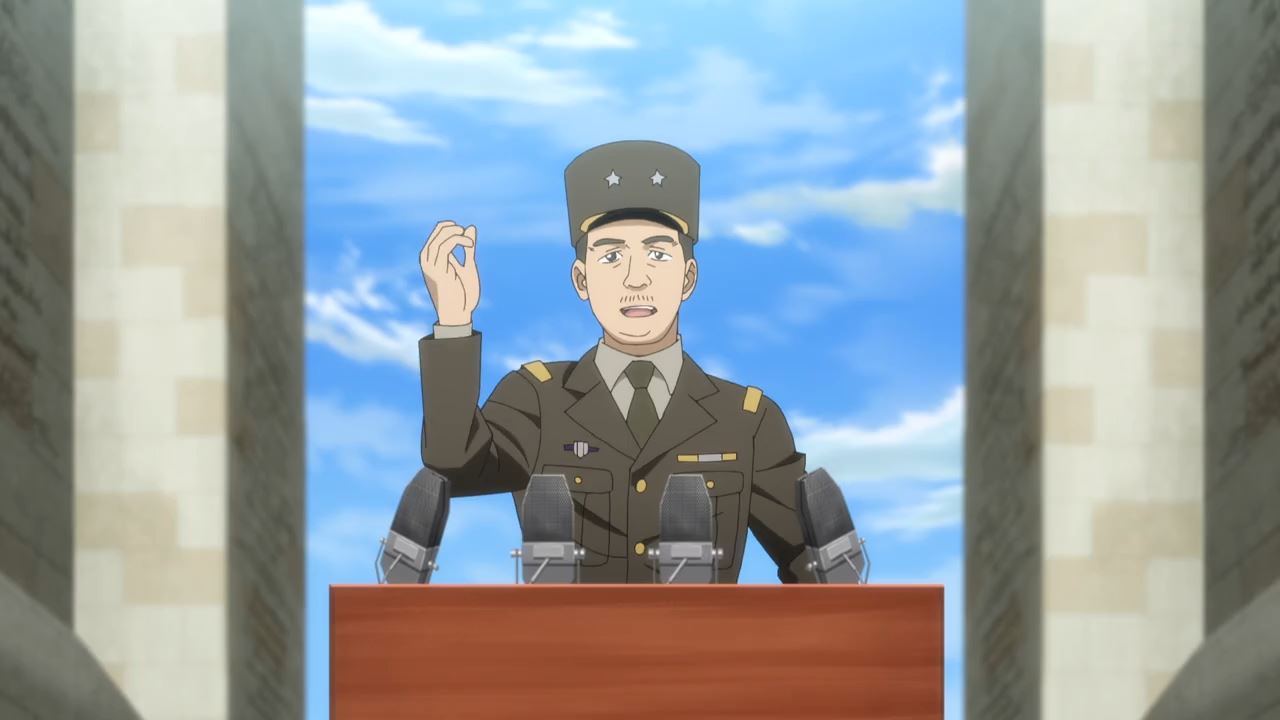 Let’s begin this final episode with Cyrille de Gaulle, the commander-in-chief of the Gallia Armed Forces where he’s deeply thrilled that his country was liberated from the Neuroi threat thanks to various witches who risk their lives to destroy the enemy’s nest.

But you know something, I wish the 501st Joint Fighter Wing would make an appearance in Gallia where they receive their medal of honor, but some bastard general named Trevor Maloney disband them so his team can use Neuroi technology for their next-generation fighter aircraft known as the Warlock… with devastating results as using Neuroi to destroy its brethren is a stupid and costly mistake.

Still, the 501st Joint Fighter Wing was reinstated shortly after that Warlock incident, thus the Strike Witches will do impossible feats in the future such as the liberation of Romagna and Karlsland, but we’re getting ahead of ourselves! 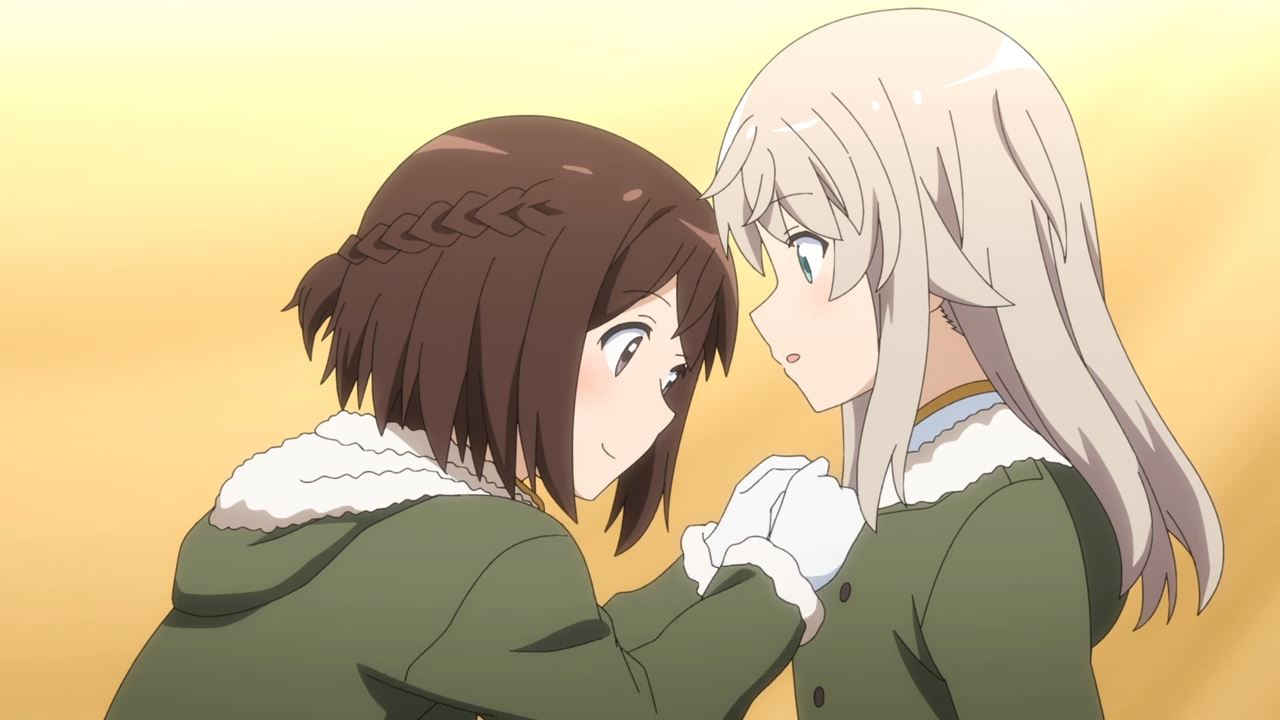 Anyways, the 72nd Aviation Magic Band have arrived in Gallia for their final leg of their world tour as they’re about to perform shortly after Cyrille de Gaulle’s inspiring speech that took roughly 4 to 5 hours.

So while the girls are getting ready for the big show, Inori Shibuya put something special on Virginia Robertson’s outfit. 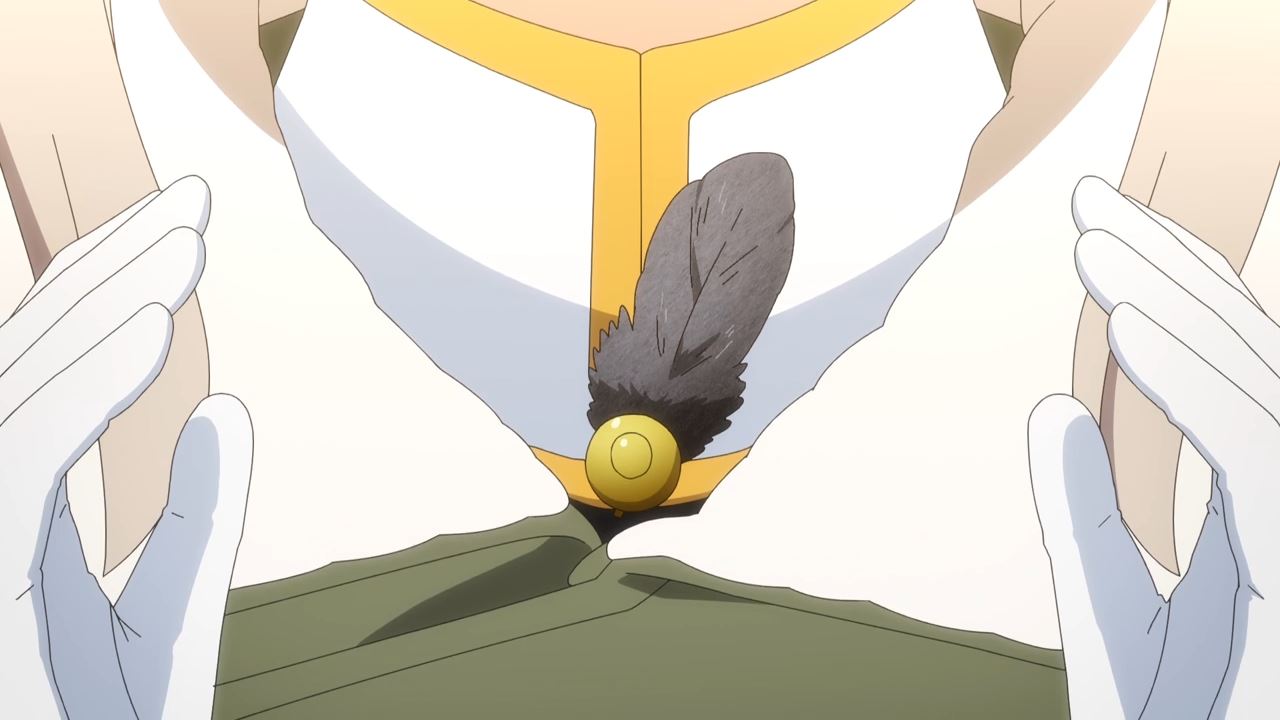 It’s Moffy’s feather where Inorin pinned it to Ginny’s outfit. Even though she can’t see the feather anymore, Virginia Robertson felt that her familiar is with her.

Come to think of it, I wonder if Moffy miraculously returned on this final episode? Nah, there’s no way Ginny’s former familiar would come back to her. 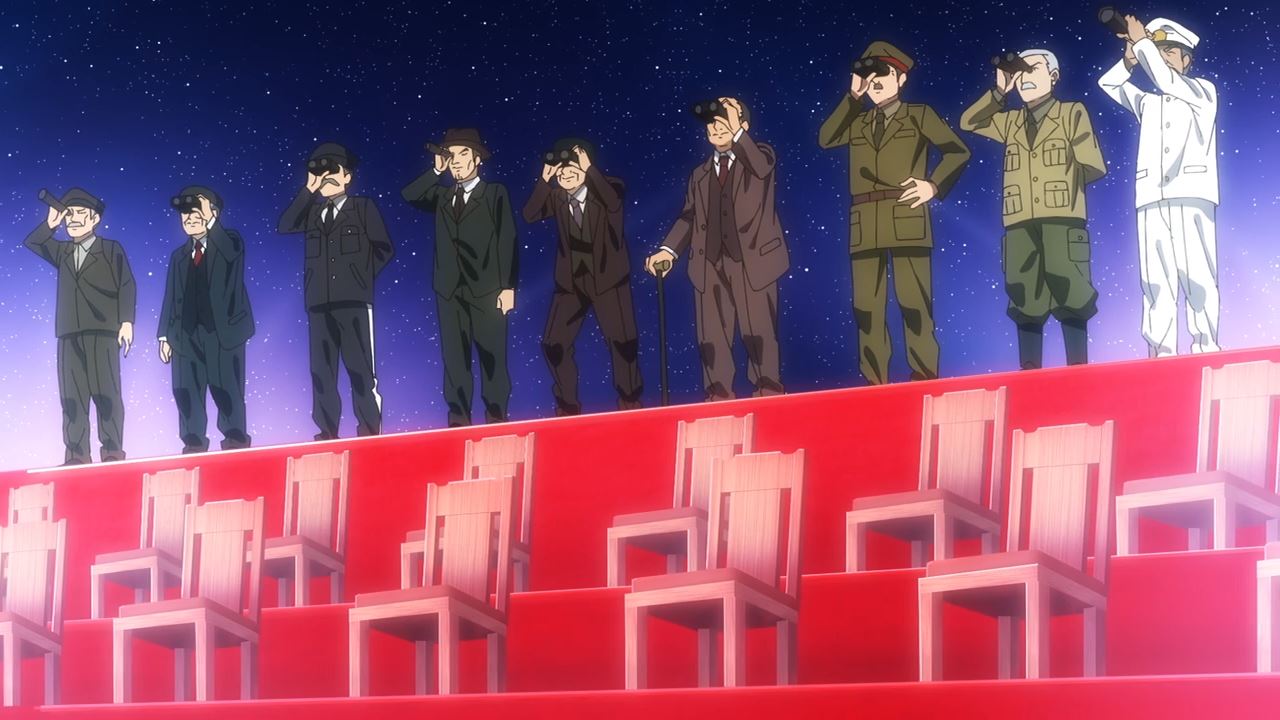 Anyways, the big wigs have arrived to see the Luminous Witches perform at the famous Arc de Triomphe. It’s sucks that civilians are off-limits where they can’t see the 72nd Aviation Magic Band at a recognizable distance. 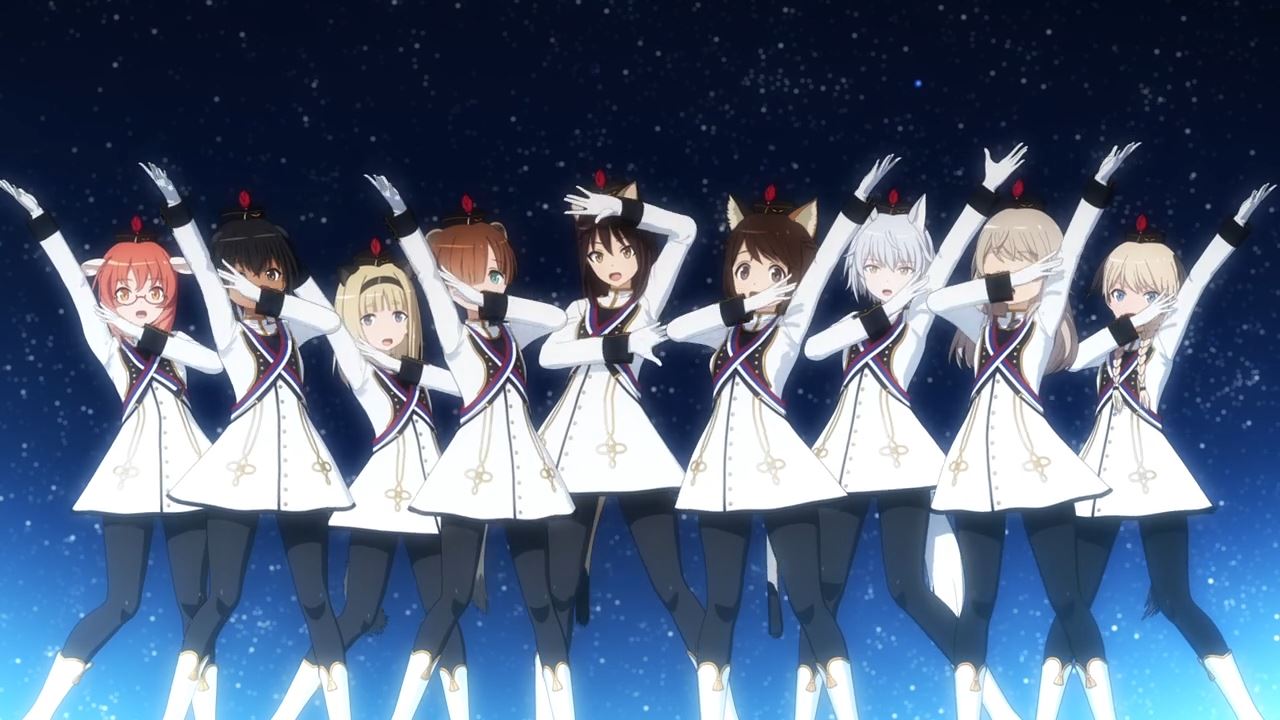 And here’s the 72nd Aviation Magic Band where they begin their final leg of their world tour. Of course, you have to remember that Virginia Robertson can’t fly because her familiar Moffy went back to its companions. 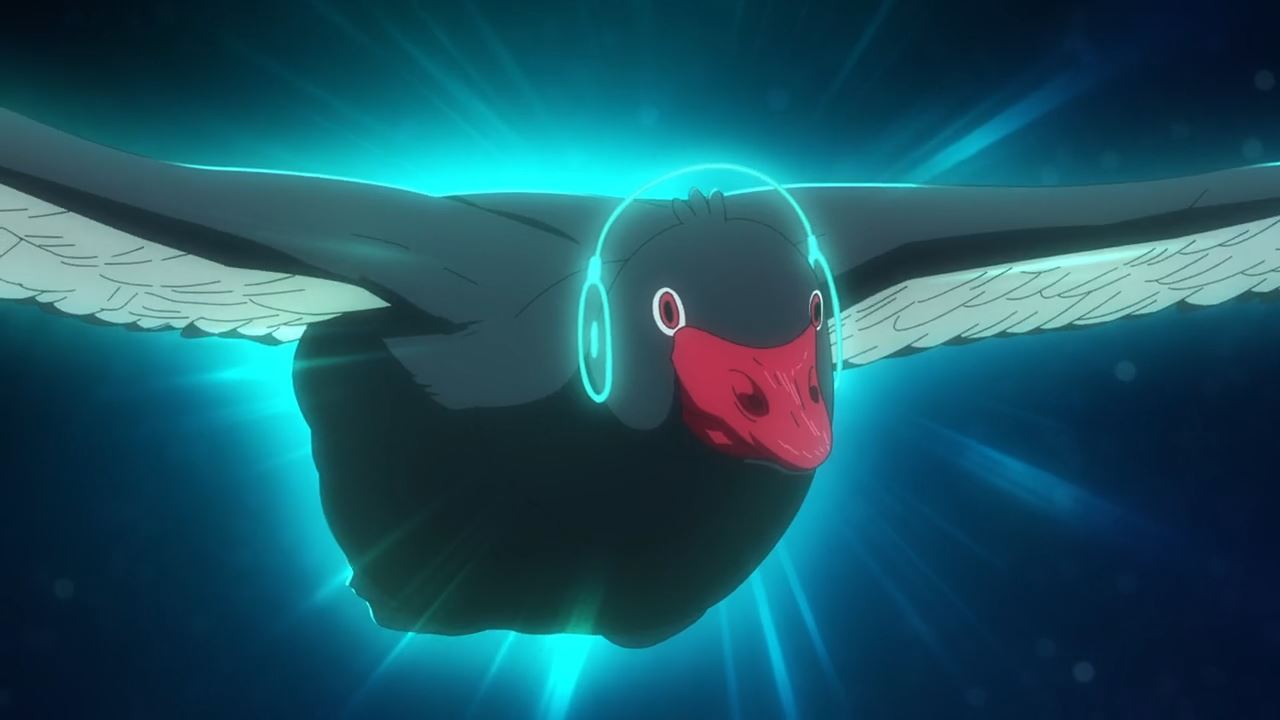 However, looks like I have to take it back from what I’ve said earlier as Moffy the black swan is back, almost as if Ginny managed to reach her beloved pet bird. 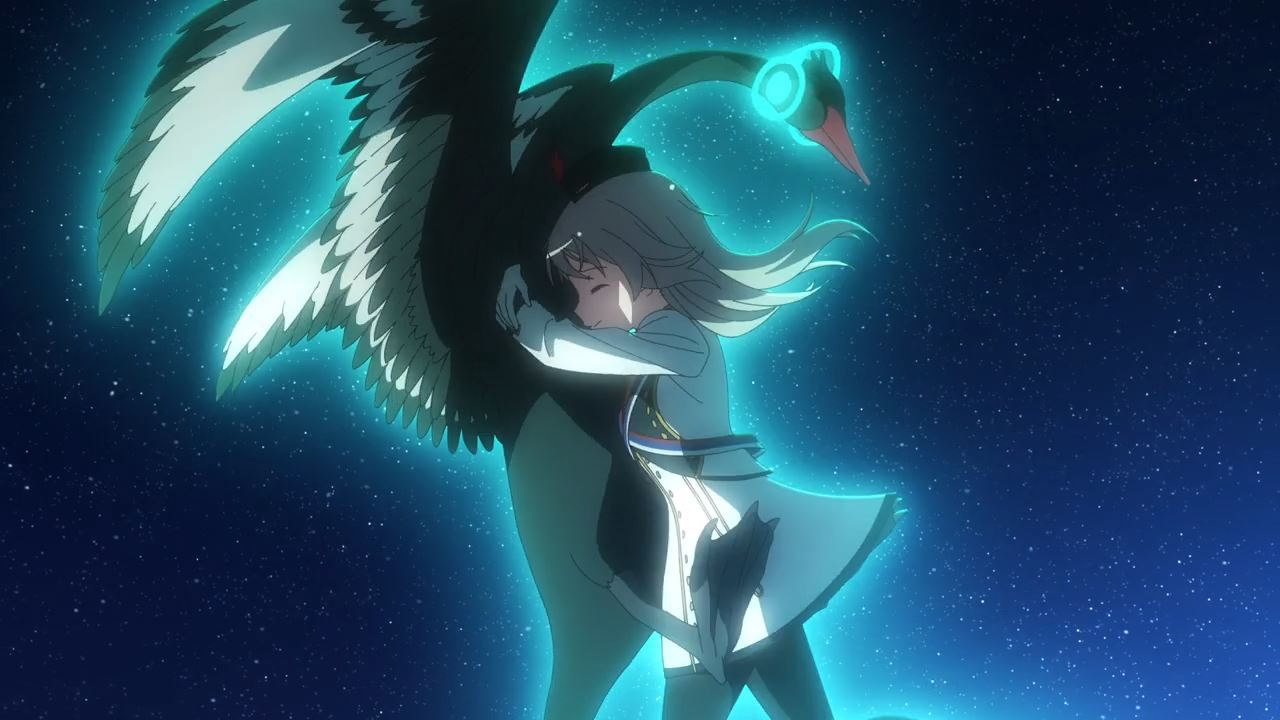 In any case, I’m glad that Moffy has returned for the final episode as the black swan is reunited with Virginia Robertson. 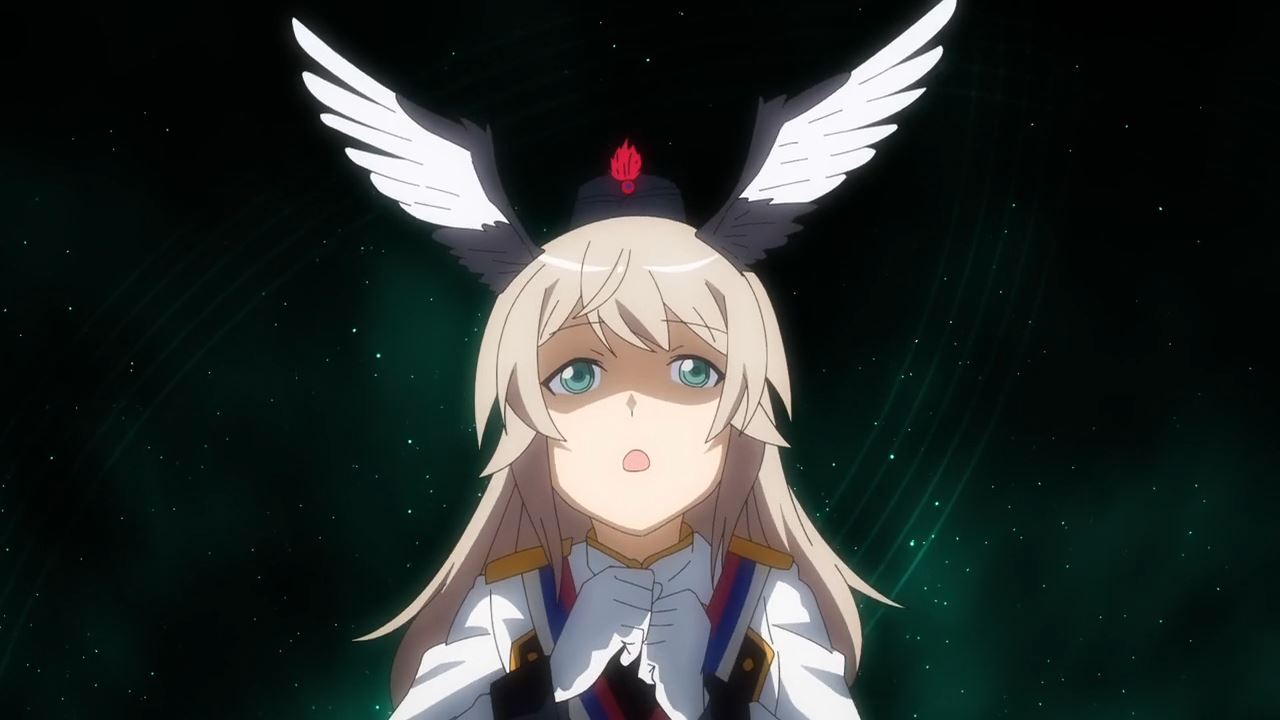 Not only that, but it looks like Ginny is back to being a night witch again as she gained bird wings on her head. Gotta say that there’s a miracle happened in Paris! 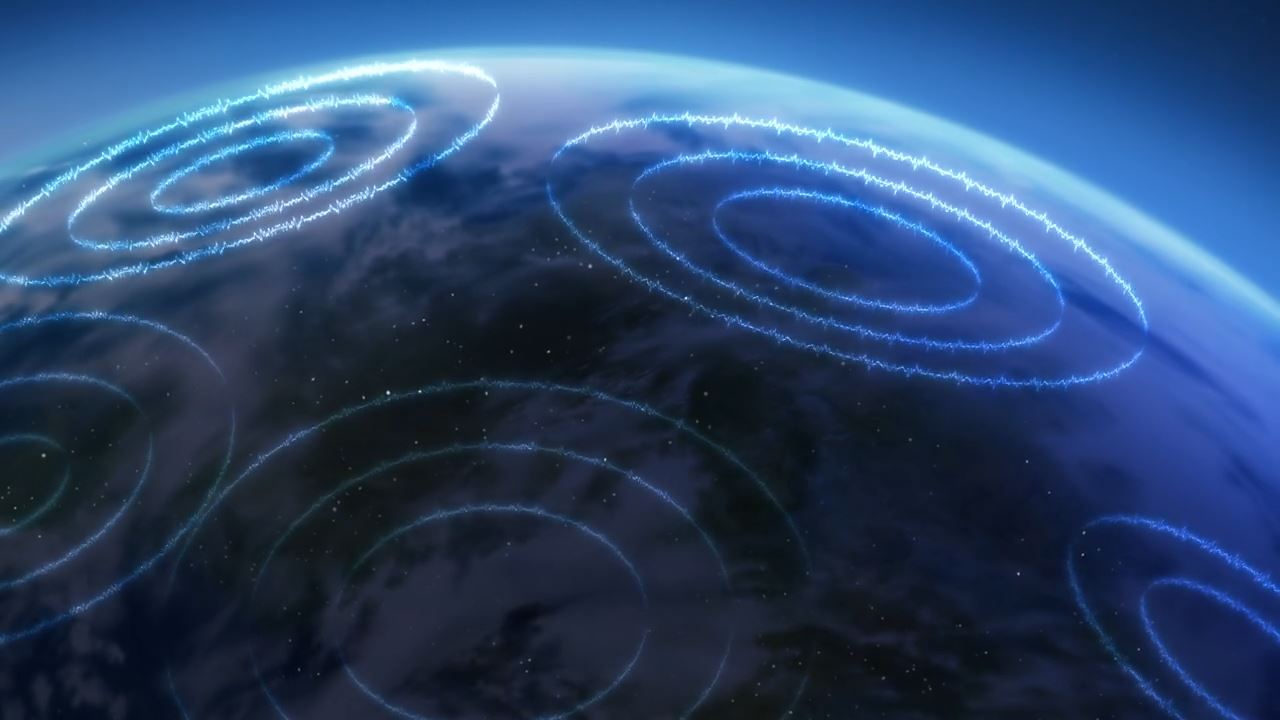 Oh yeah, and there’s more to Moffy’s miraculous return as the entire concert is being broadcast around the world thanks to Ginny’s impressive magic powers.

Then again, the common folks will have to settle hearing their songs as they still can’t see the Luminous Witches. 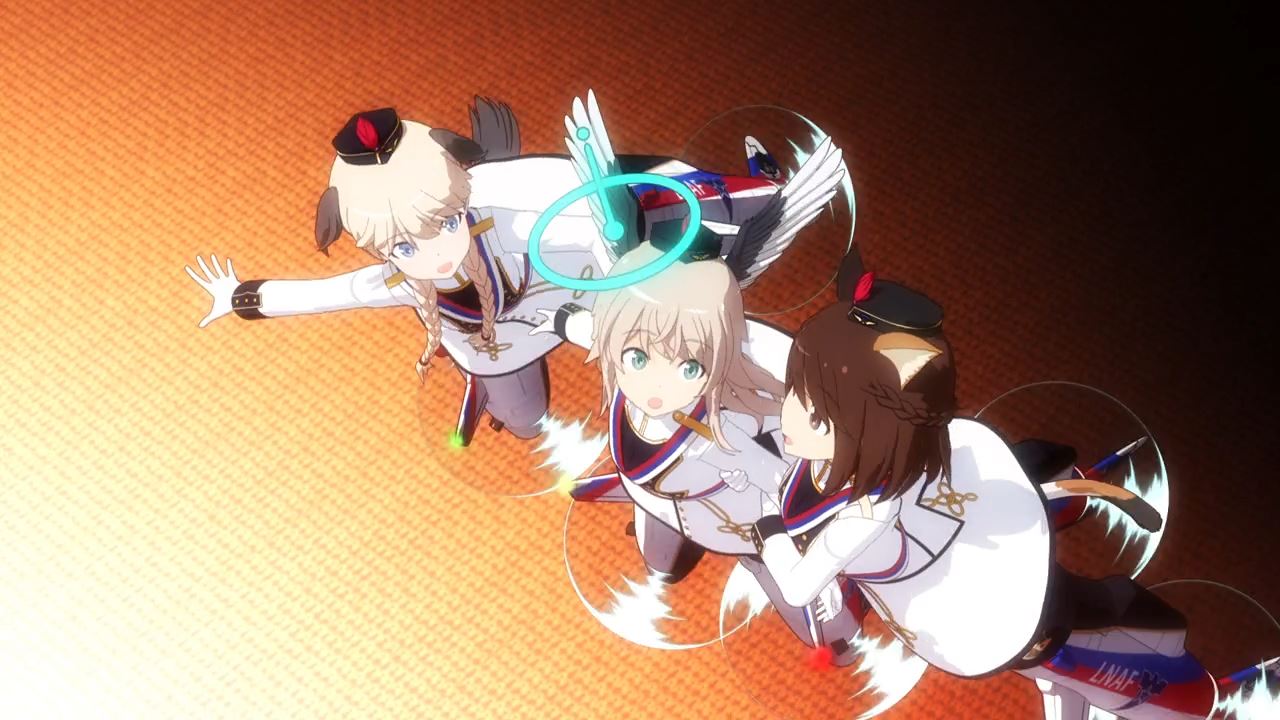 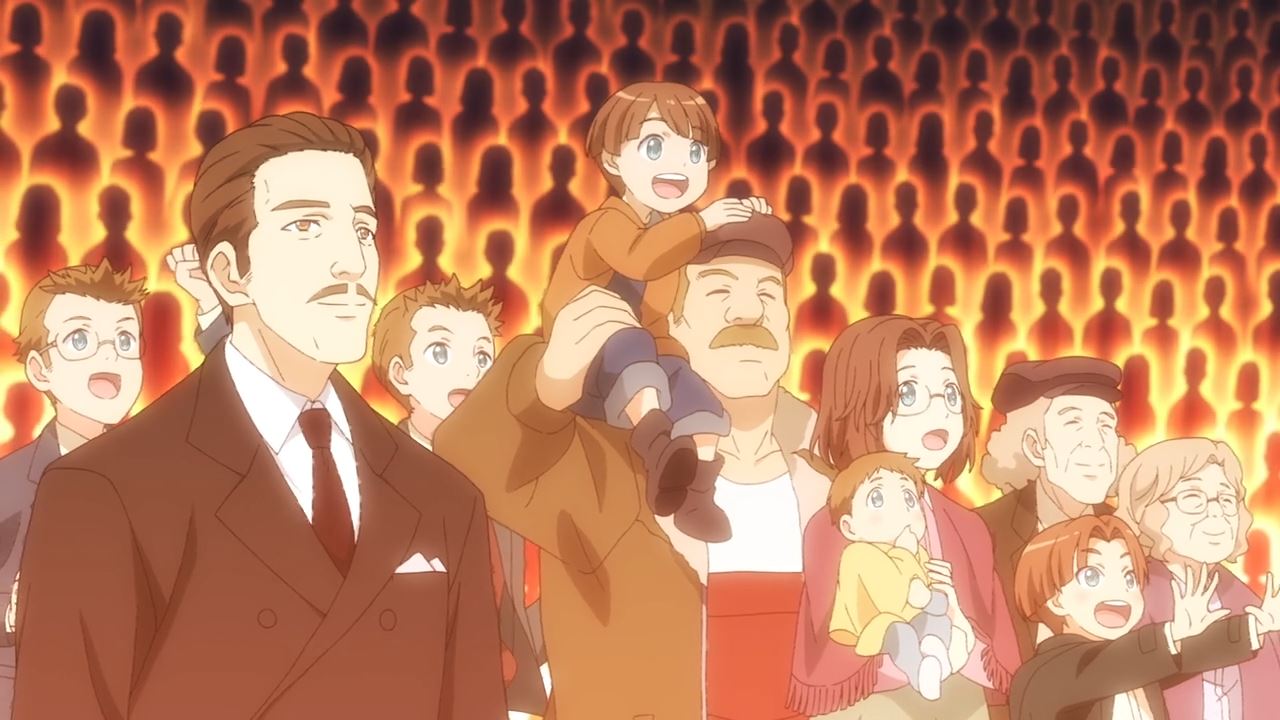 Just kidding, turns out that the military brass allowed civilians to see the entire concert at the Arc de Triomphe.

In fact, they made it just in time to see Ginny fly again along with her teammates. But wait, there’s more! 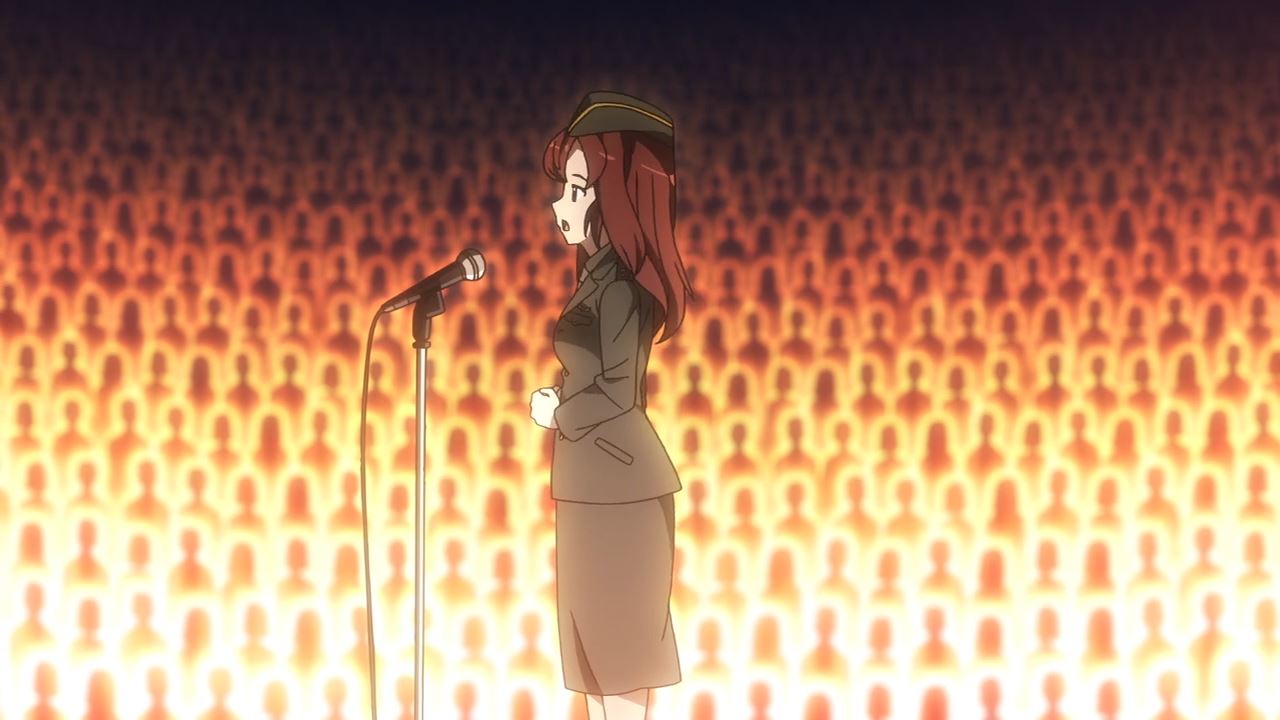 You see, while the Luminous Witches are preparing for their encore performance, Commander Grace Maitland Steward takes the center stage where she shows her singing talent.

Despite being the commander of the 72nd Aviation Magic Band, Gracie still has the passion to sing in front of a large crowd. 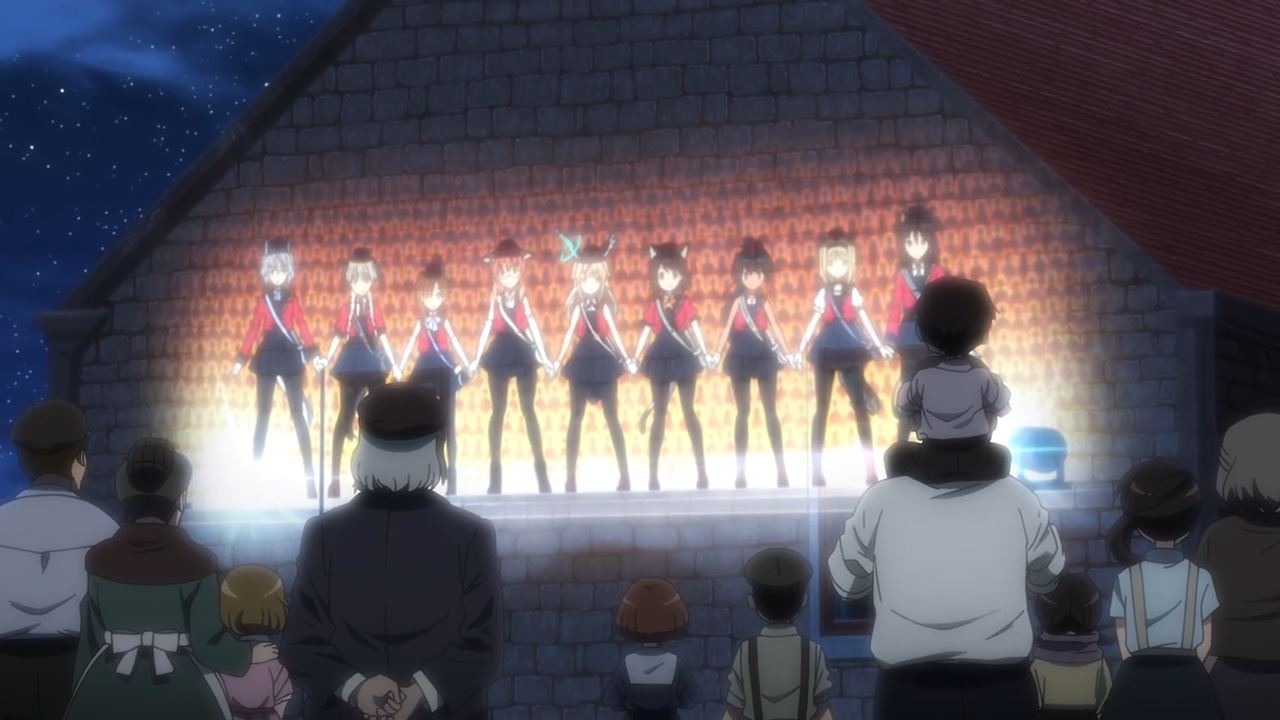 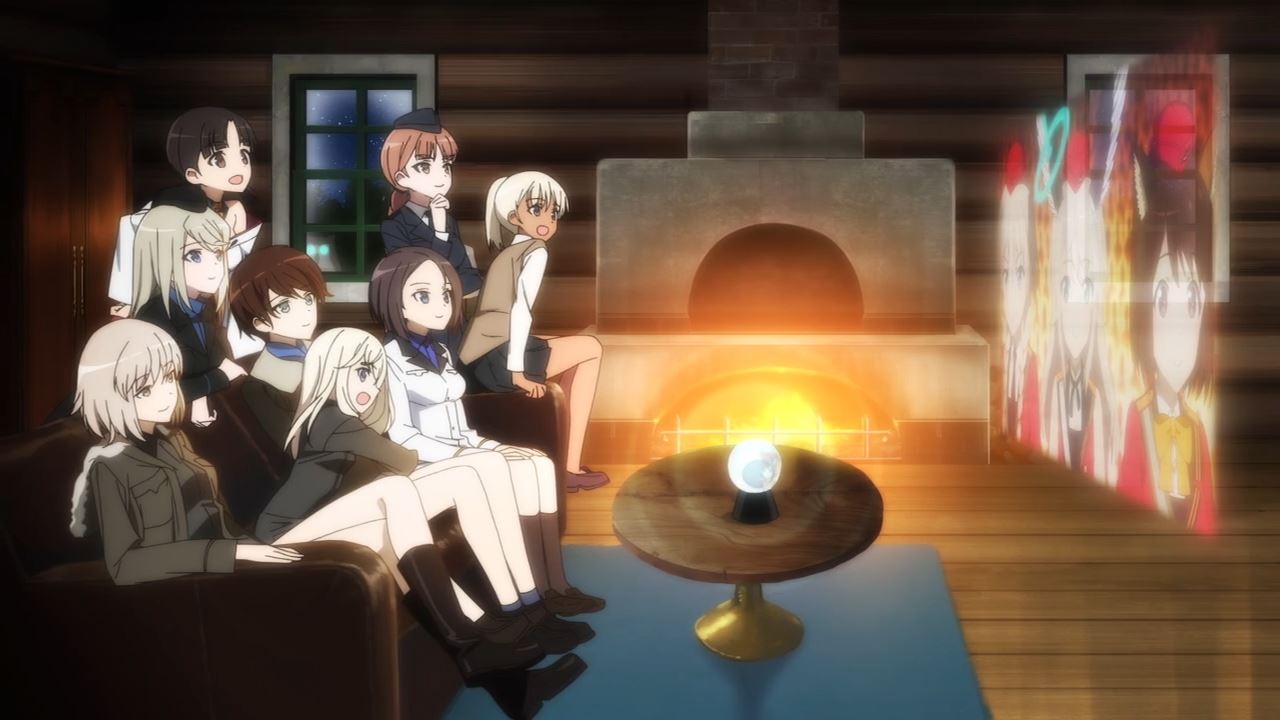 Now then, the 72nd Aviation Magic Band have returned for their encore performance and get a load of this, Ginny’s impressive magic has made literal airwaves across the world where she broadcast the Luminous Witches concert in both sound and picture (or video as you may call it).

In any case, their world tour has finally ended as the Luminous Witches have proved the entire world where even though they’re not useful in combat, they can help everyone through the power of music! 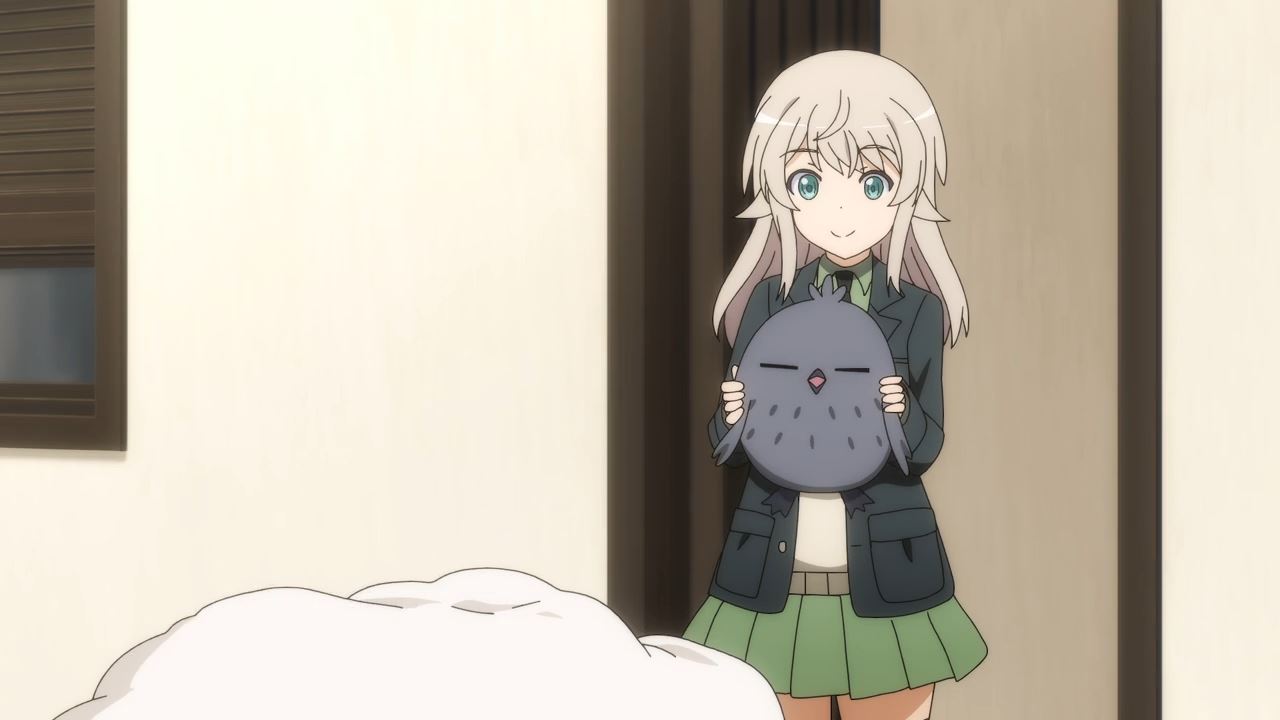 And as for Moffy, looks like Virginia Robertson’s familiar went back into a round-shape owl as its latent magic energy has ran out. I guess Moffy’s black swan form is just temporary after all!

But that concludes Luminous Witches as this World Witches spin-off is decent despite being different from the likes of Strike Witches or Brave Witches. Sure that it’s tamer than the rest of the franchise due to not having panty shots, but Luminous Witches gave some interesting characters where they develop themselves from being useless in combat to useful in providing moral support.

I mean, I was surprised that there is some character development from the 72nd Aviation Magic Band, most notably Sylvie Cariello who is actually part of the Carignano royal family. Of course, Joanna Elizabeth Stafford managed to convince Silvi to show her true colors rather than pretending to be someone else. Also, I like the dynamic between Maria Magadalene Dietrich and Manaia Matawhaura Hato where despite having different personalities, they work together in harmony.

One last thing, I feel that it should be a sequel to Luminous Witches where the Neuroi threat is still there and everyone needs some emotional support from the 72nd Aviation Magic Band, especially from Romagna and Karlsland where they’re still under enemy control. Regardless, this World Witches spin-off is interesting where they help everyone through the power of idol music. But if want to see some classic action and fanservice, this show is not for you as you’ll rather watch the original Strike Witches and Brave Witches instead. 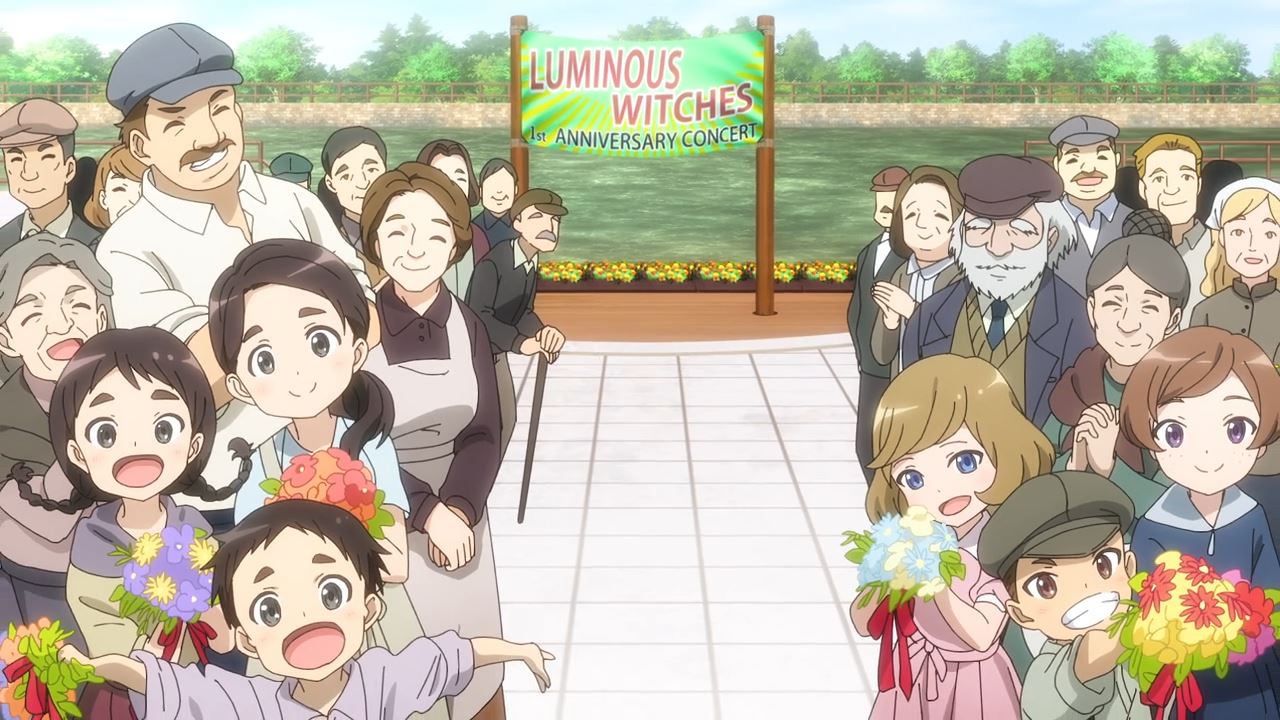 Even though they haven’t fought a single Neuroi head-on, the Luminous Witches are capable of helping other witches in winning the battle against the Neuroi threat. 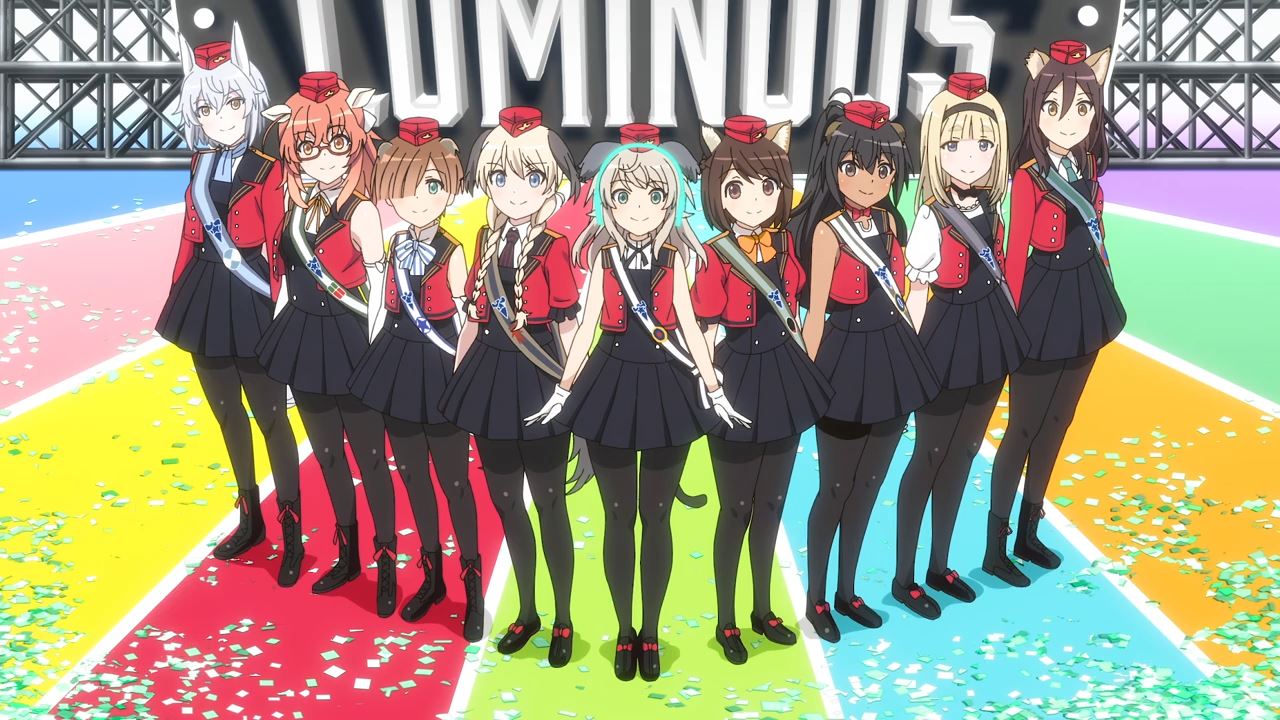 With that said, I congratulate these 9 witches for their bravery through the power of songs. I hope they keep on flying towards the future!