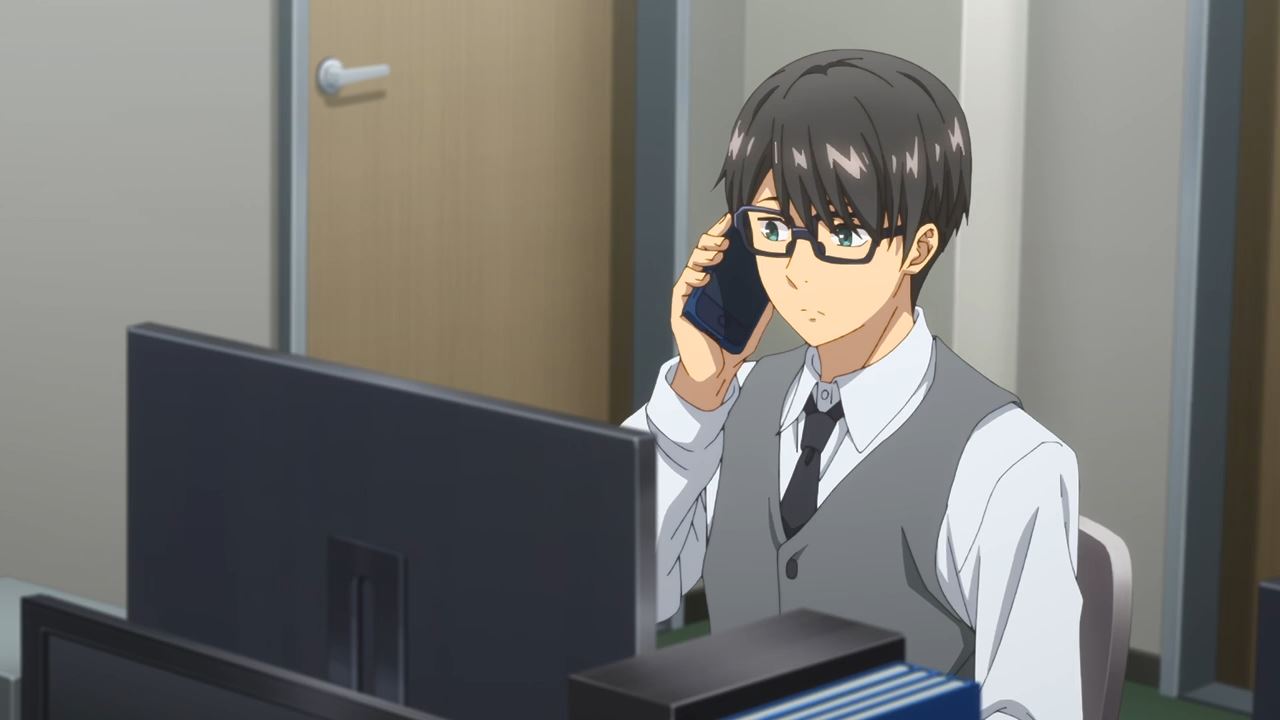 Let’s begin with Naoki Hinase where he’s talking to the mysterious caller. Speaking of that caller, looks like she’s writing lyrics for TINGS’ new song and she knows Haru Nabatame.

Too bad that we’ll never get to see who this mysterious caller is as Shine Post is approaching the finale. 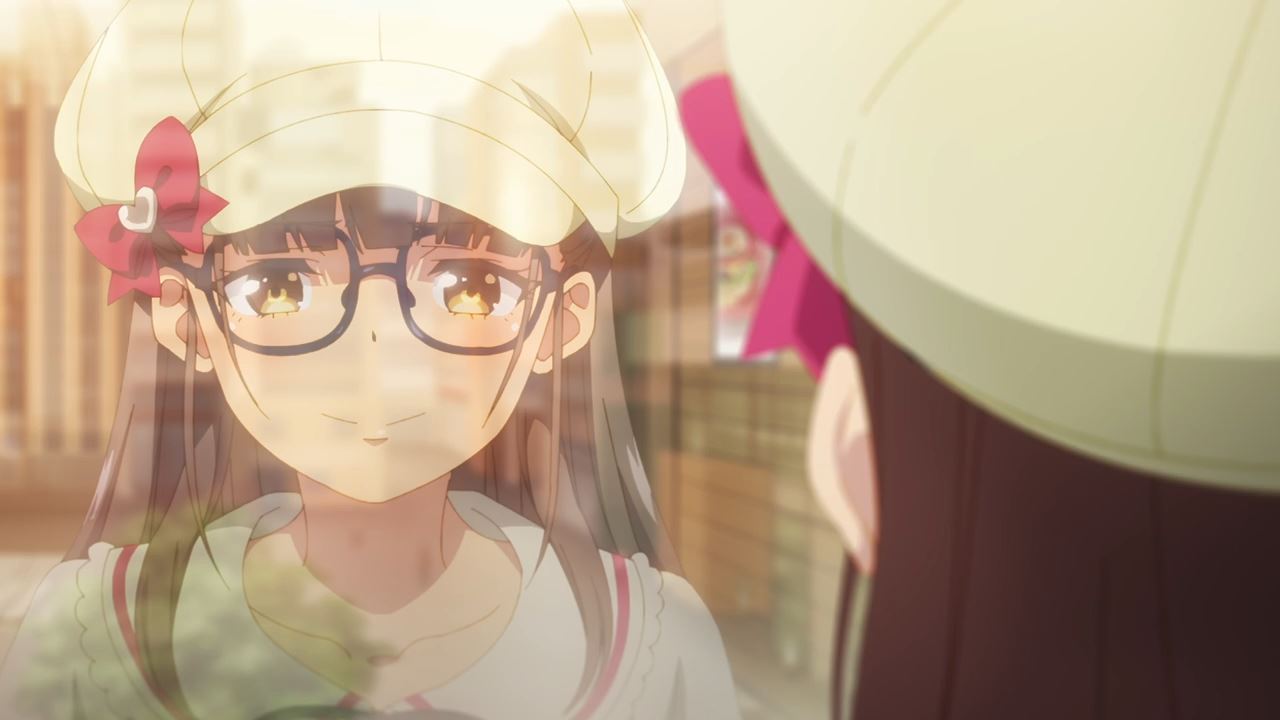 Anyways, this penultimate episode focuses on Kyouka Tamaki where despite overcoming her trauma, Kyouka is really bothered by Ren Kurogane’s remarks where even though she doesn’t make any mistakes, Tamaki doesn’t have any unique qualities compared to her peers.

Of course, let’s not forget that she became a center back in Episode 4, although it’s a shame that Kyouka Tamaki should have carry the momentum forward after that episode. 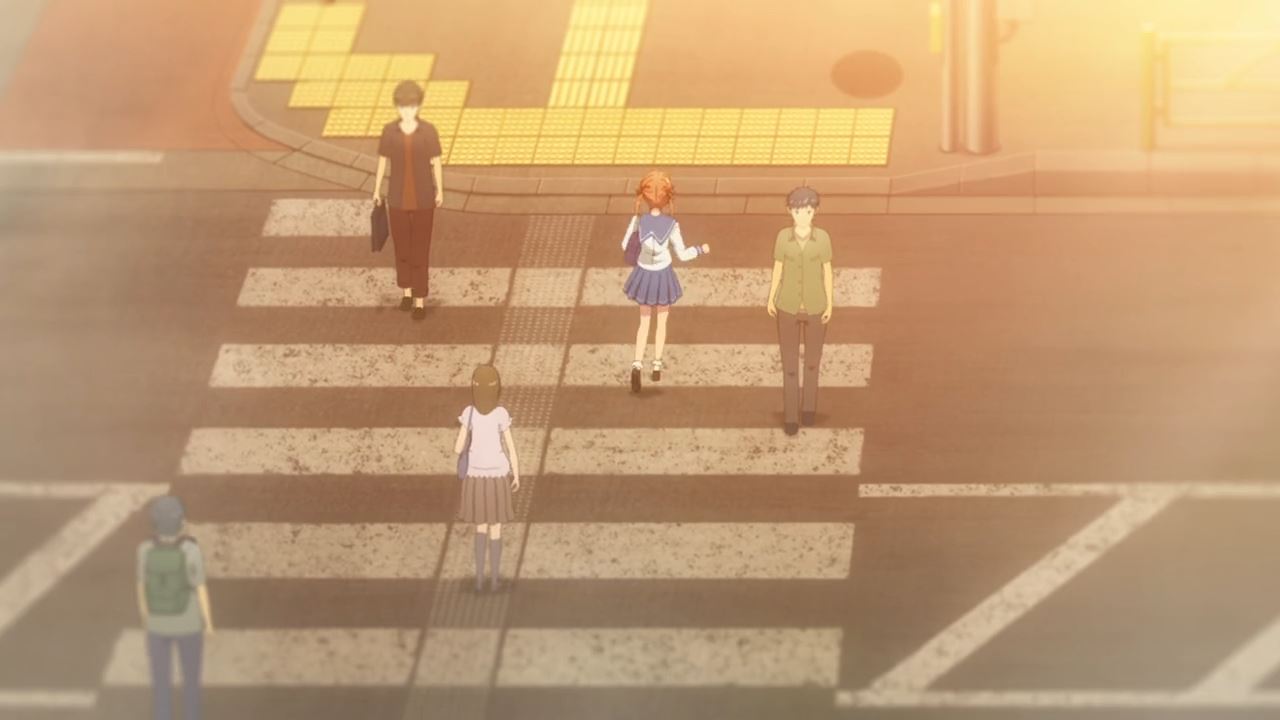 So while she’s pondering her idol career, Kyouka Tamaki saw Haru Nabatame running across the street where I have a feeling that she’s meeting someone. 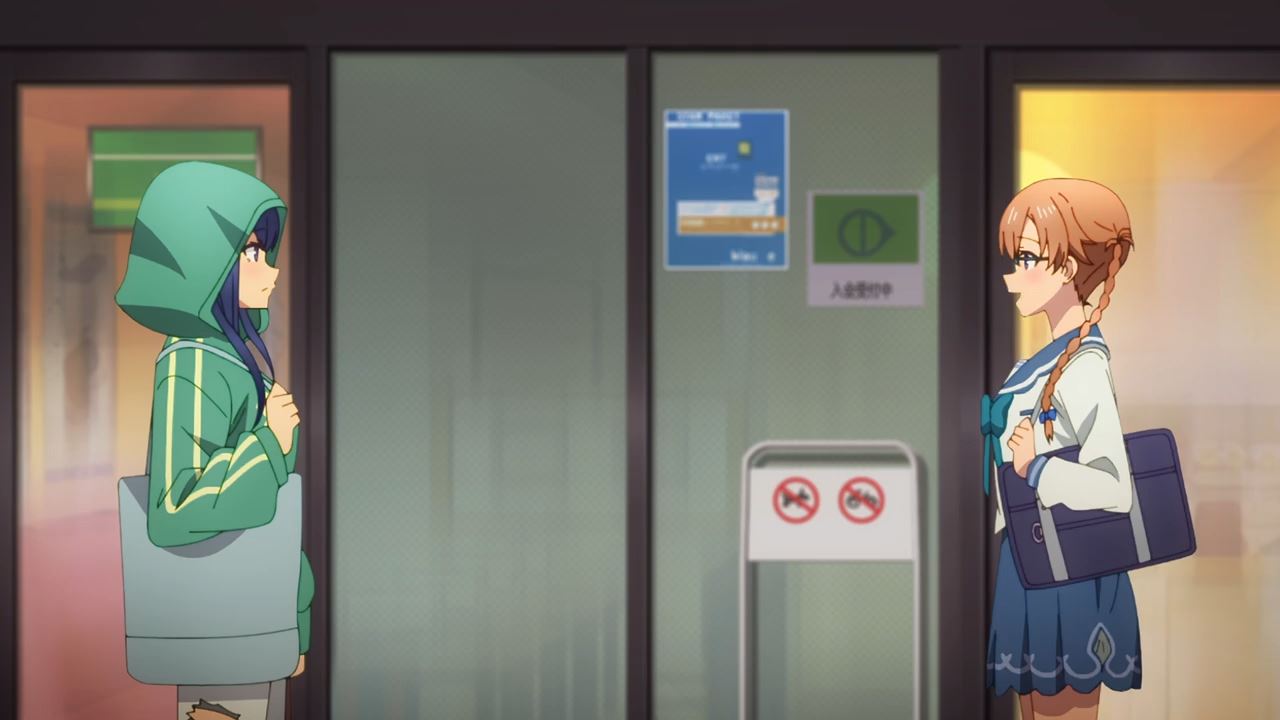 Turns out that Haru is meeting her friend Ren Kurogane where the leader of HY-RAIN brought some donuts as a gift, although she still wants Nabatame to come back to her old idol group. 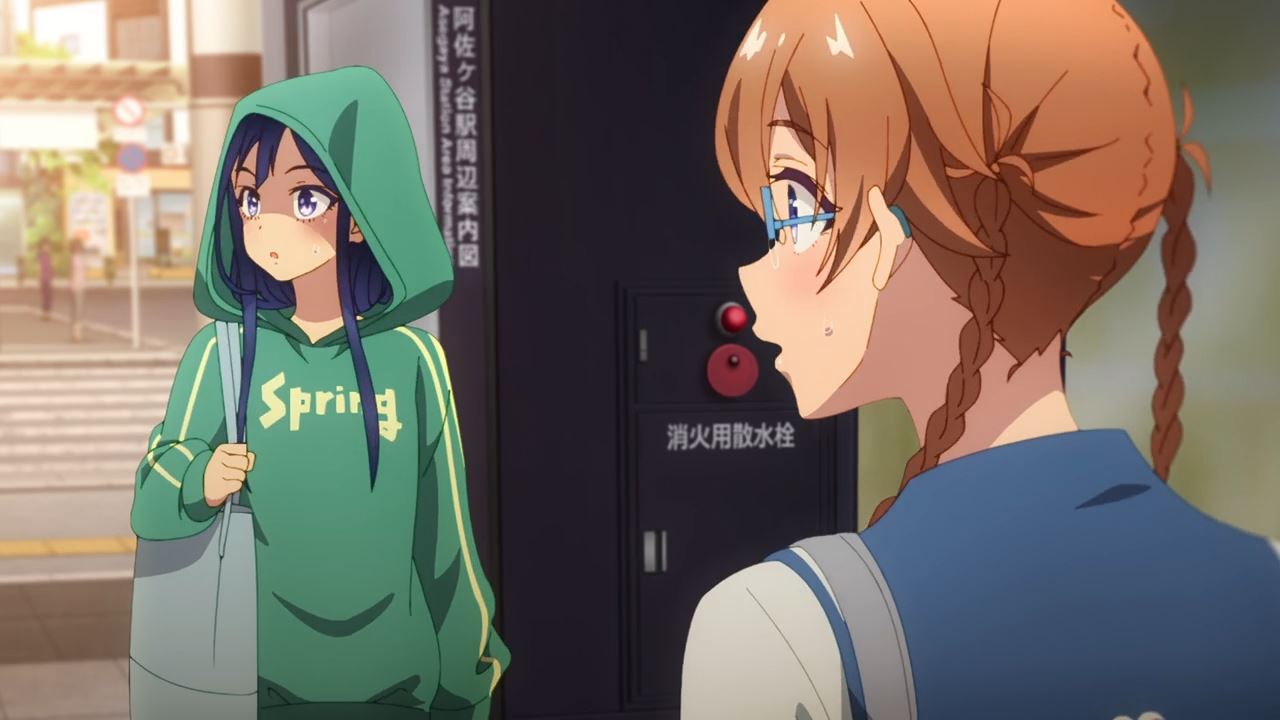 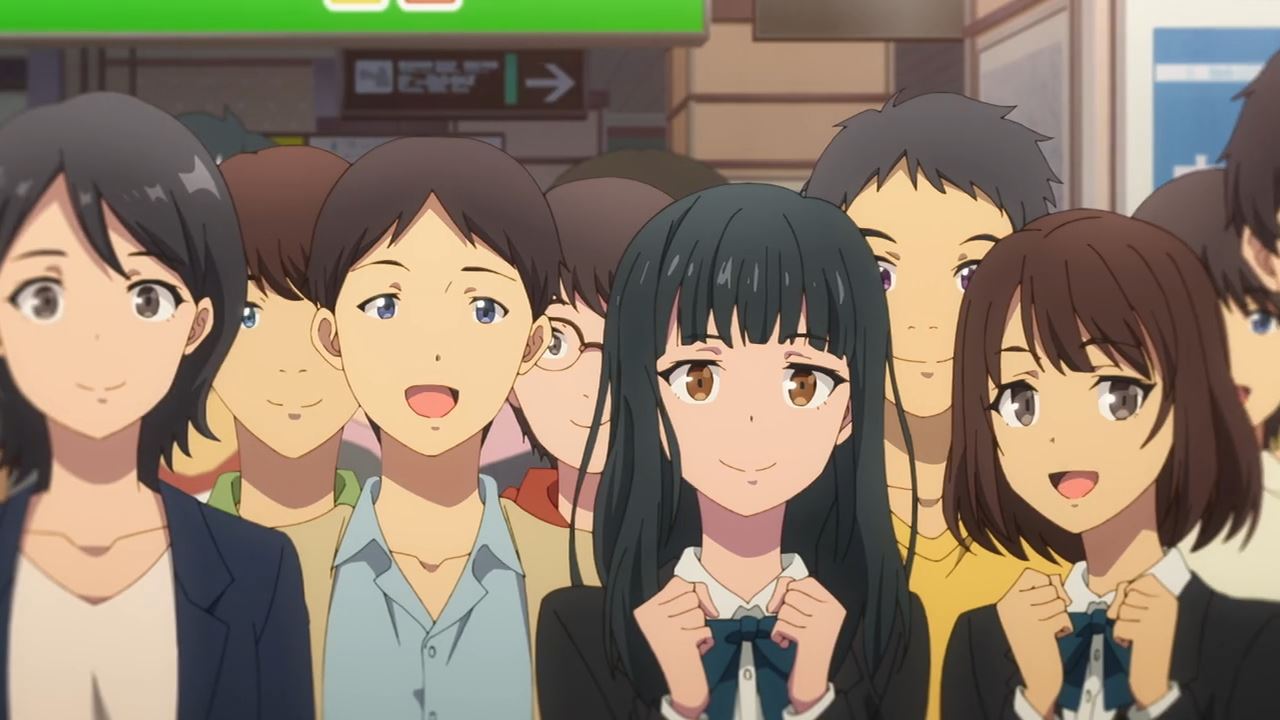 Unfortunately, seems that Ren Kurogane is really careless as onlookers saw the famous idol right off the bat. Okay Ren, I think you should meet your friend somewhere secret! 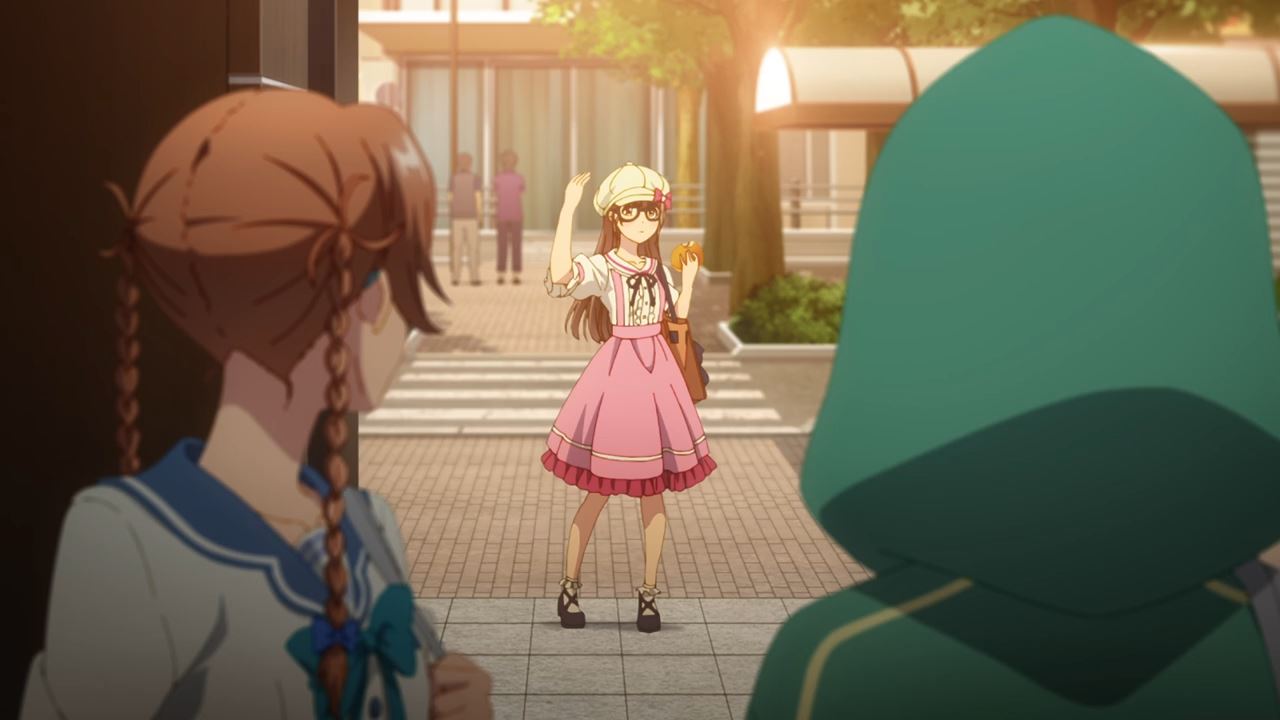 Luckily, Kyouka Tamaki has arrived to save both Ren Kurogane and Haru Nabatame. Gotta say that she’s the MVP on this episode despite being called the Plain Jane of TINGS. 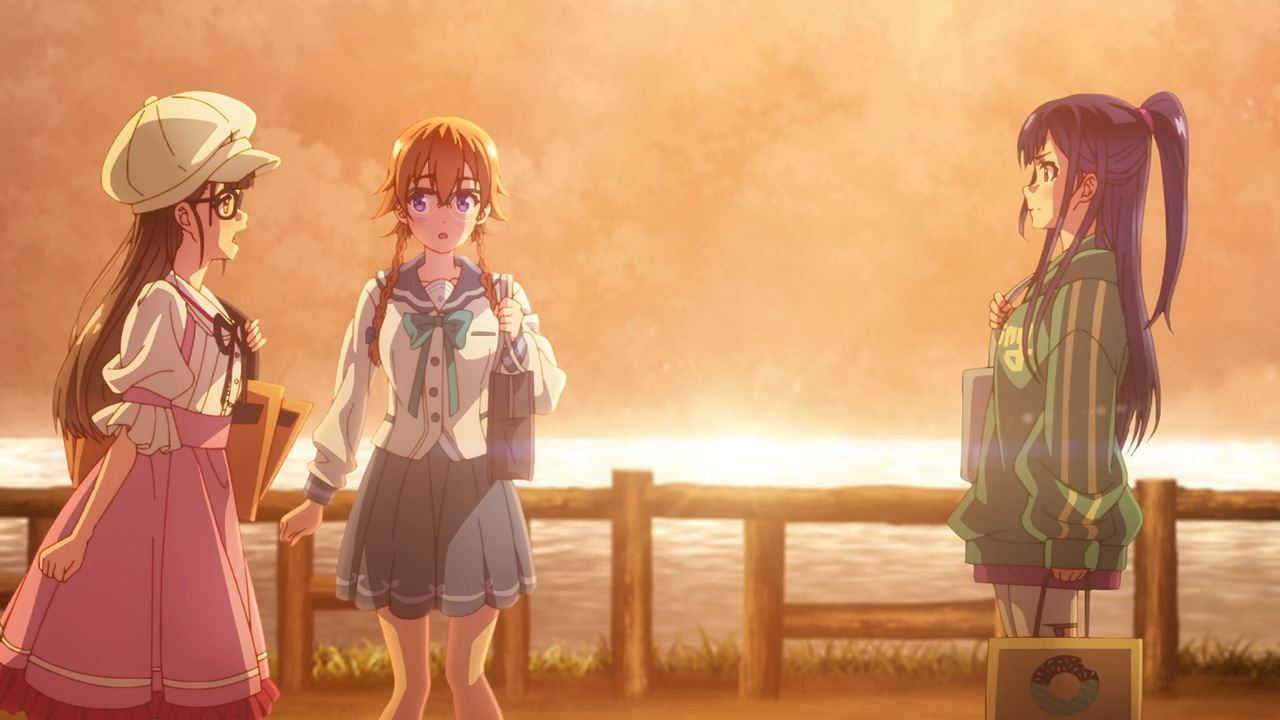 And speaking of Tamaki, she called Kurogane out for being a popular idol who’s being careless in hiding her presence. 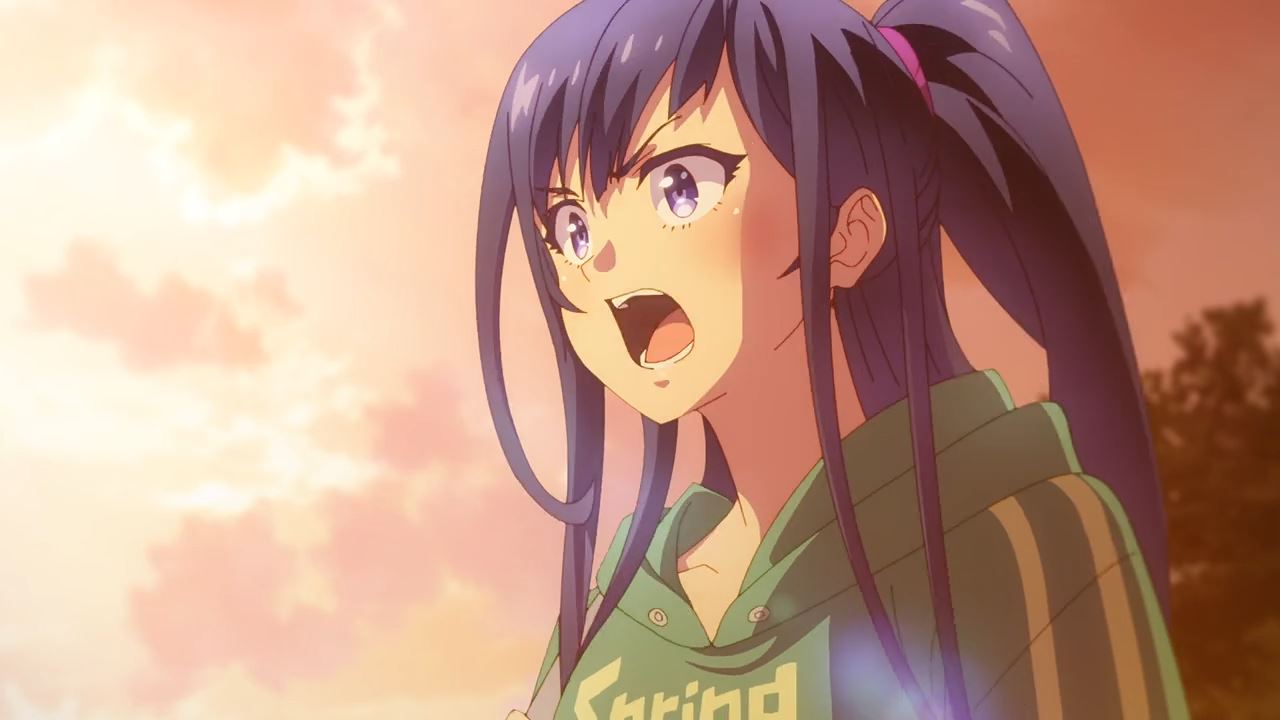 Now then, let’s talk about Ren Kurogane where the reason why she wants Haru Nabatame back in HY-RAIN is because they made a promise after watching Hotaru’s legendary concert. 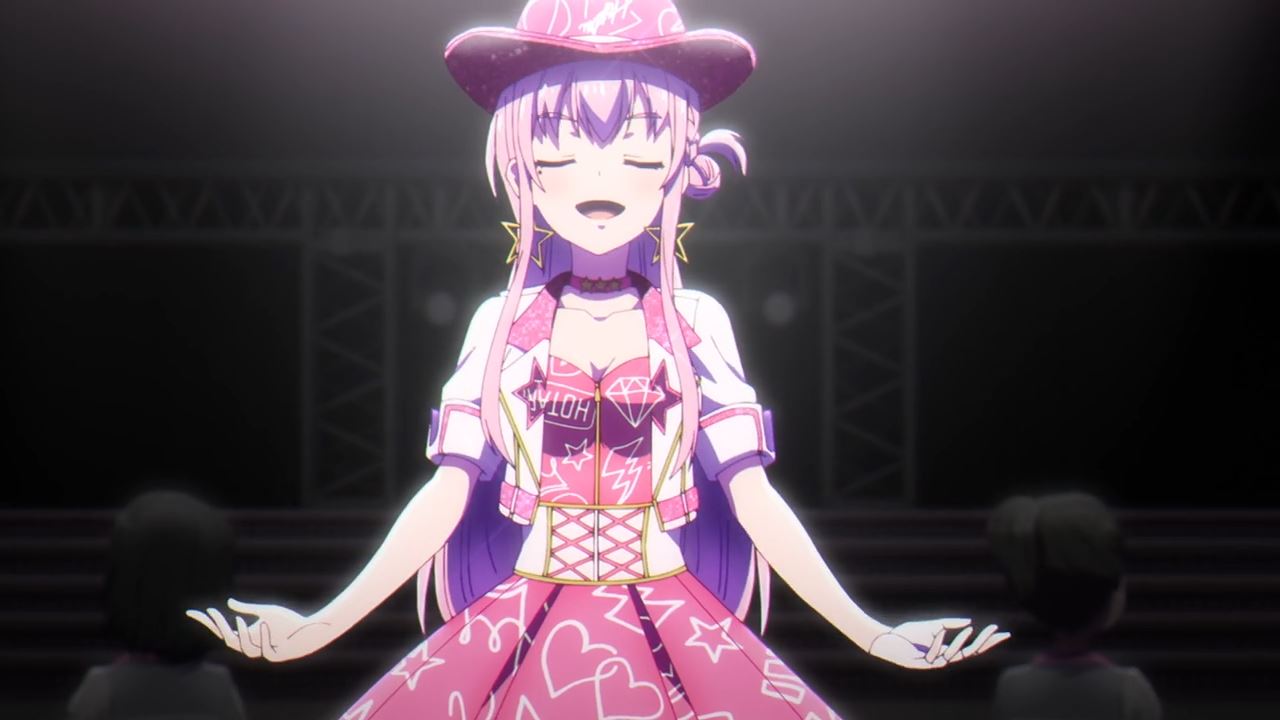 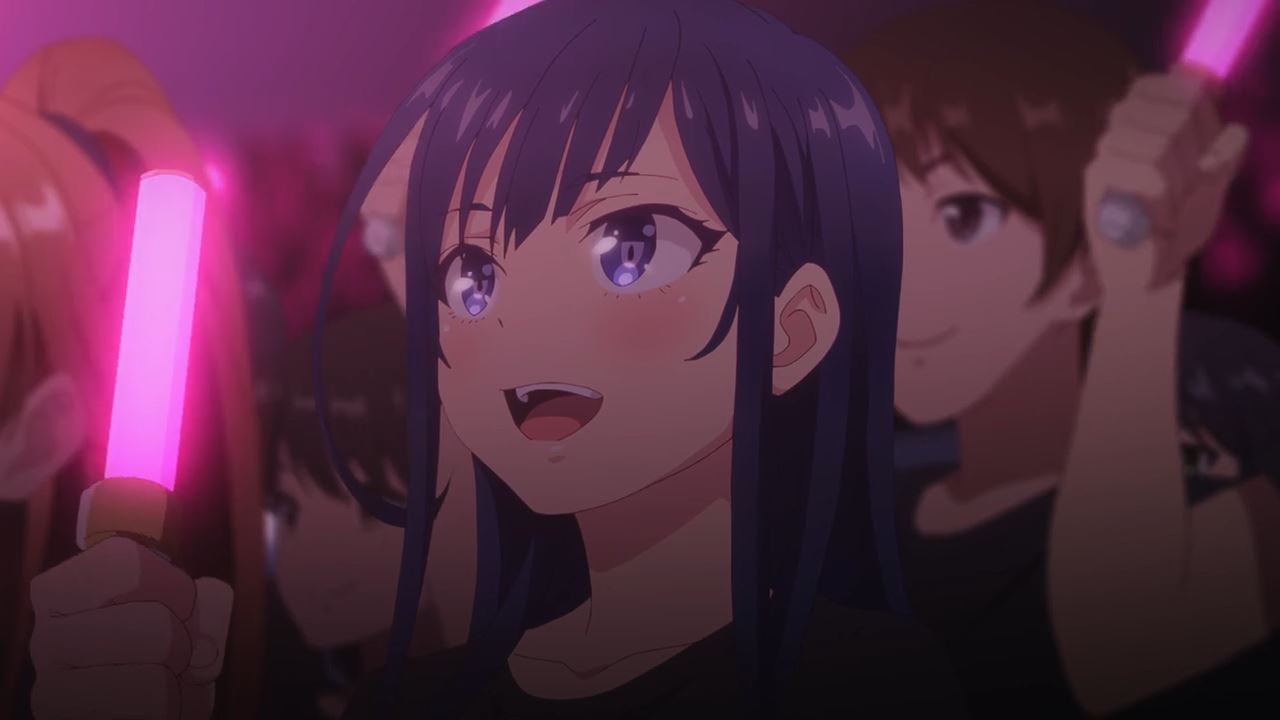 And really, I’m not surprised that everyone who went to Hotaru’s concert are inspired to chase the idol dream, even though the road to fame is pretty rough. 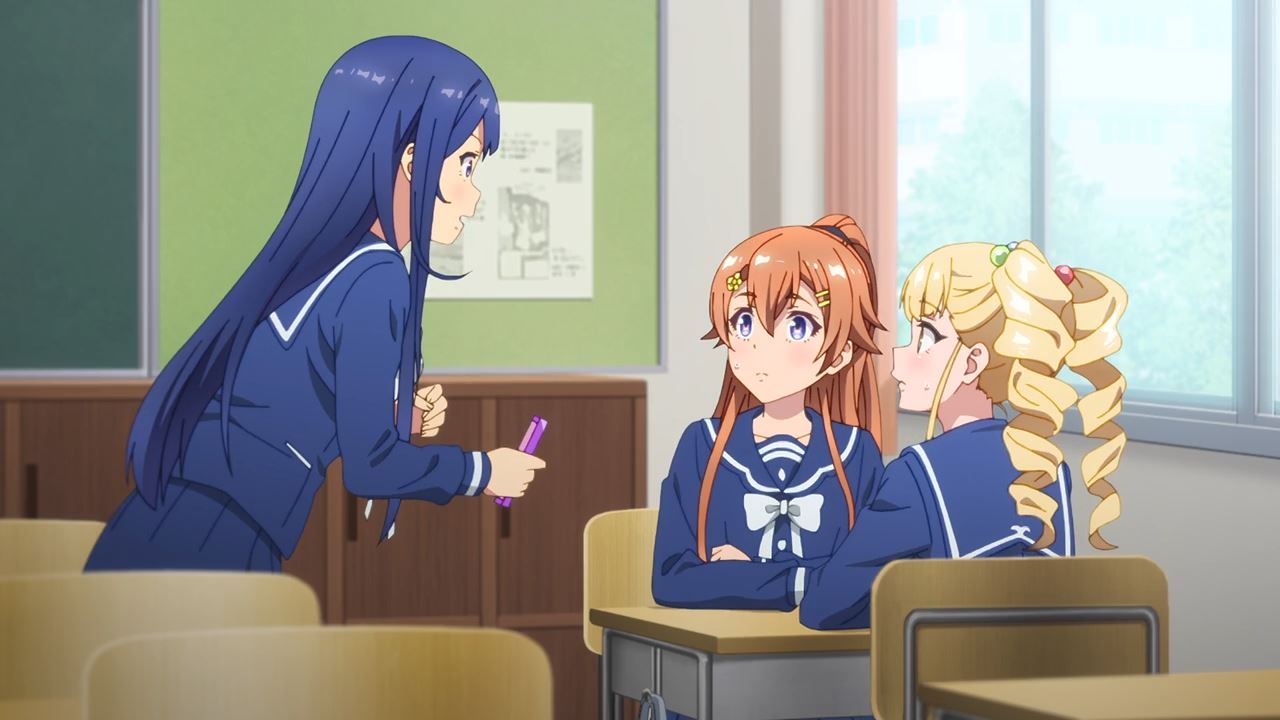 So, Ren Kurogane invited her friends to join the audition and become idols. While Haru Nabatame took the invitation, their other friend Homare Torawatari declined as she would rather watch idols as a fan.

And really, I respect Homare’s decision to remain as an idol fan as she’ll never have to feel the pain of not having any talent compared to Haru Nabatame. Seriously, I think it was a mistake for Ren to invite Haru to Rainbow Management, only to received emotional damage after Haru surpassed her. 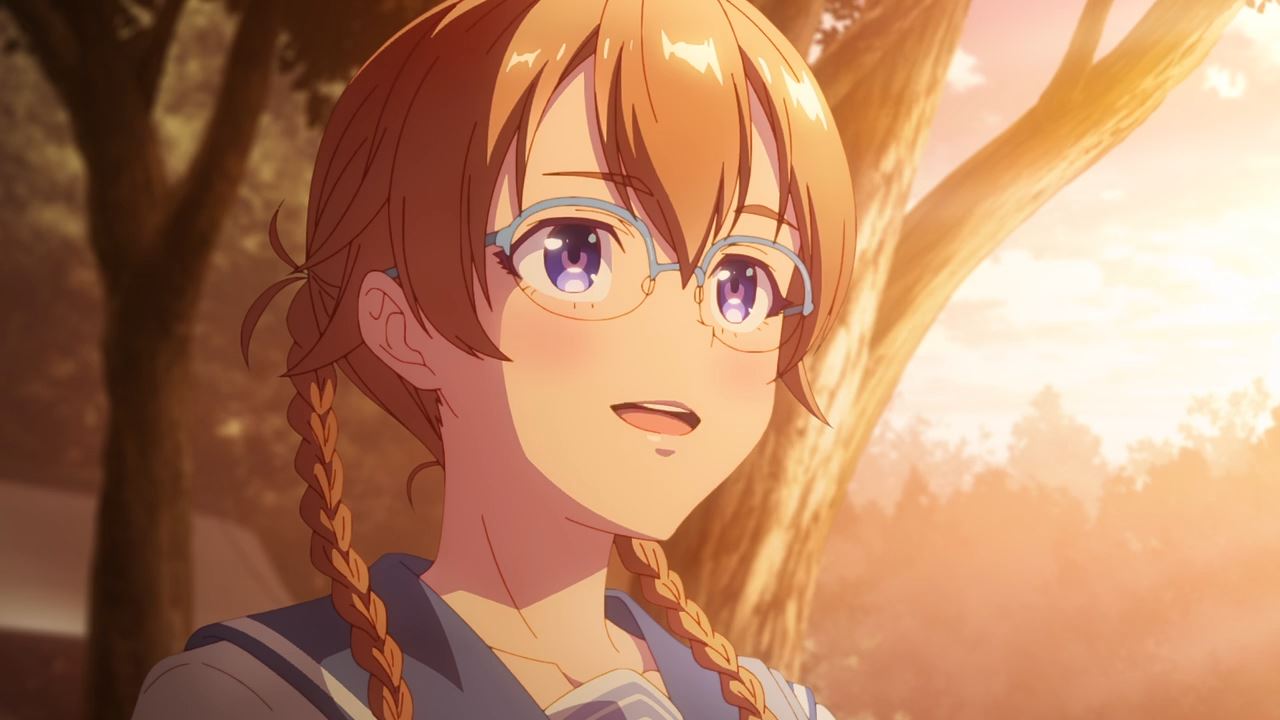 And speaking of Haru Nabatame, she made it clear that she won’t return to HY-RAIN as she doesn’t want to hurt someone ever again. 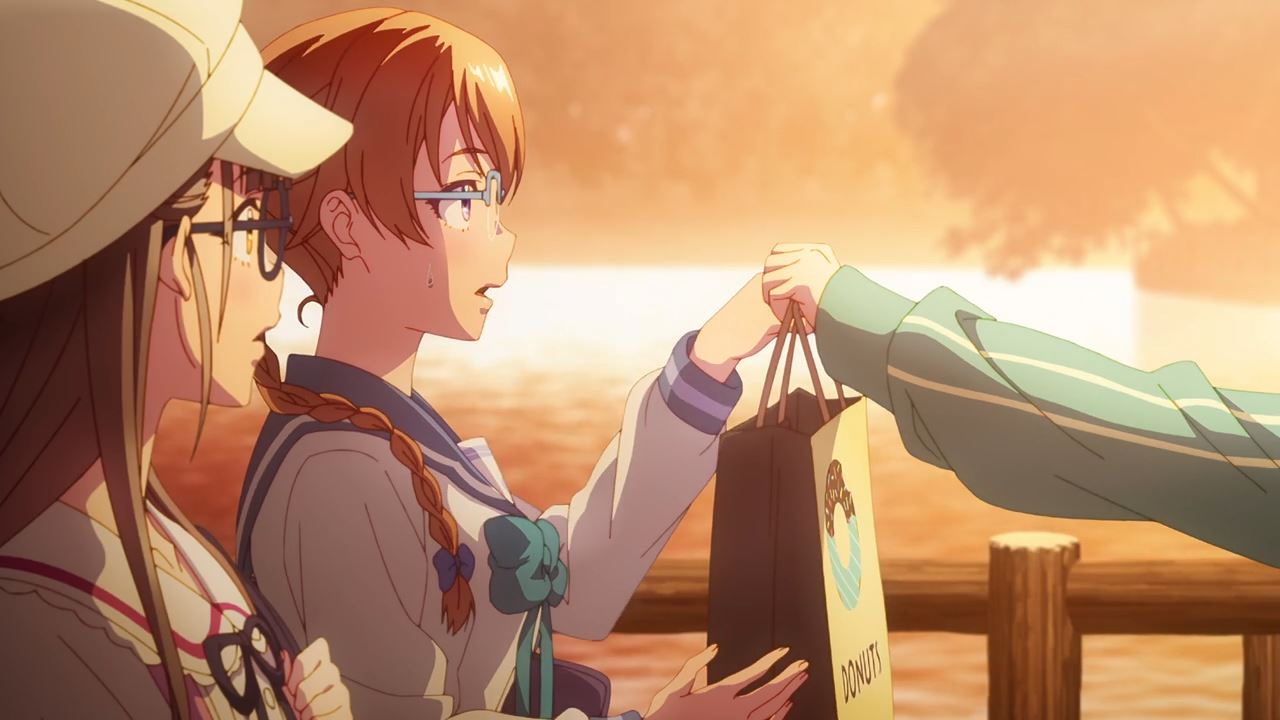 For now, Ren will take her leave as she give a bunch of donuts to Haru. C’mon, her fellow idols from Rainbow Management are searching for her at the moment. 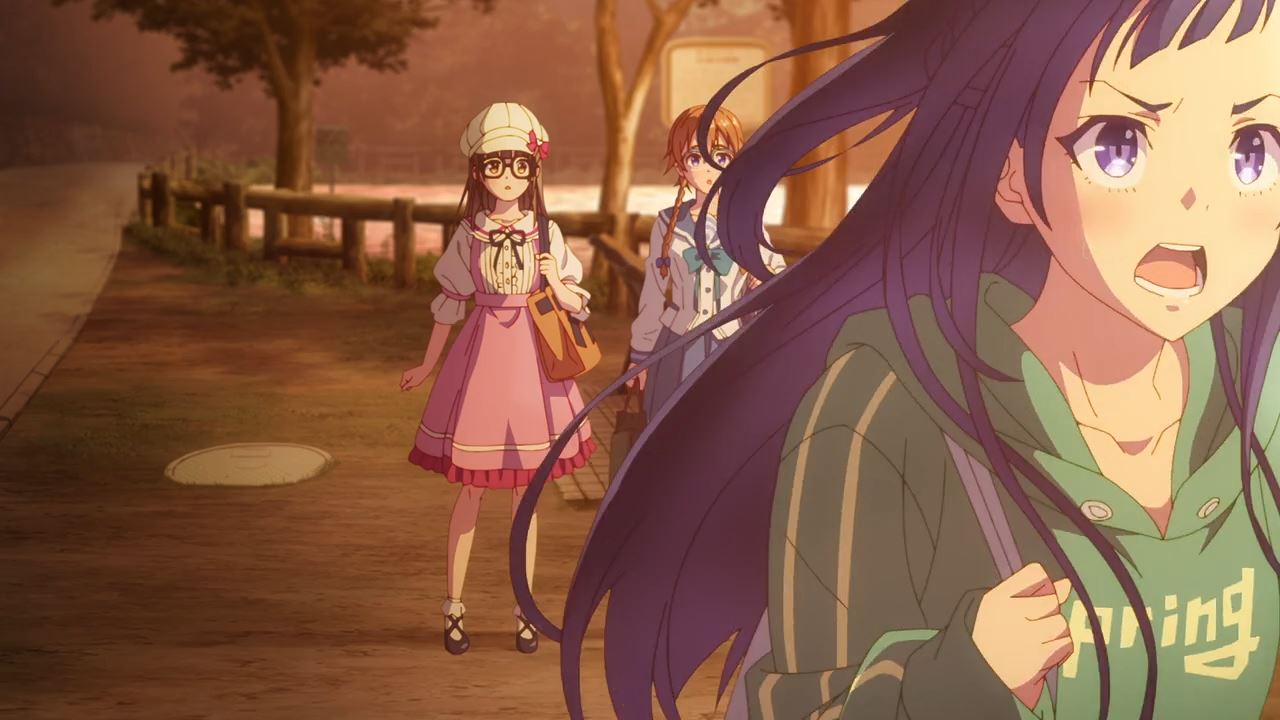 Of course, Ren Kurogane won’t stop until she get her best friend back, even though Ren will be deeply hurt in the long run should Haru returned to Rainbow Management and surpassed both her and the rest of HY-RAIN again. 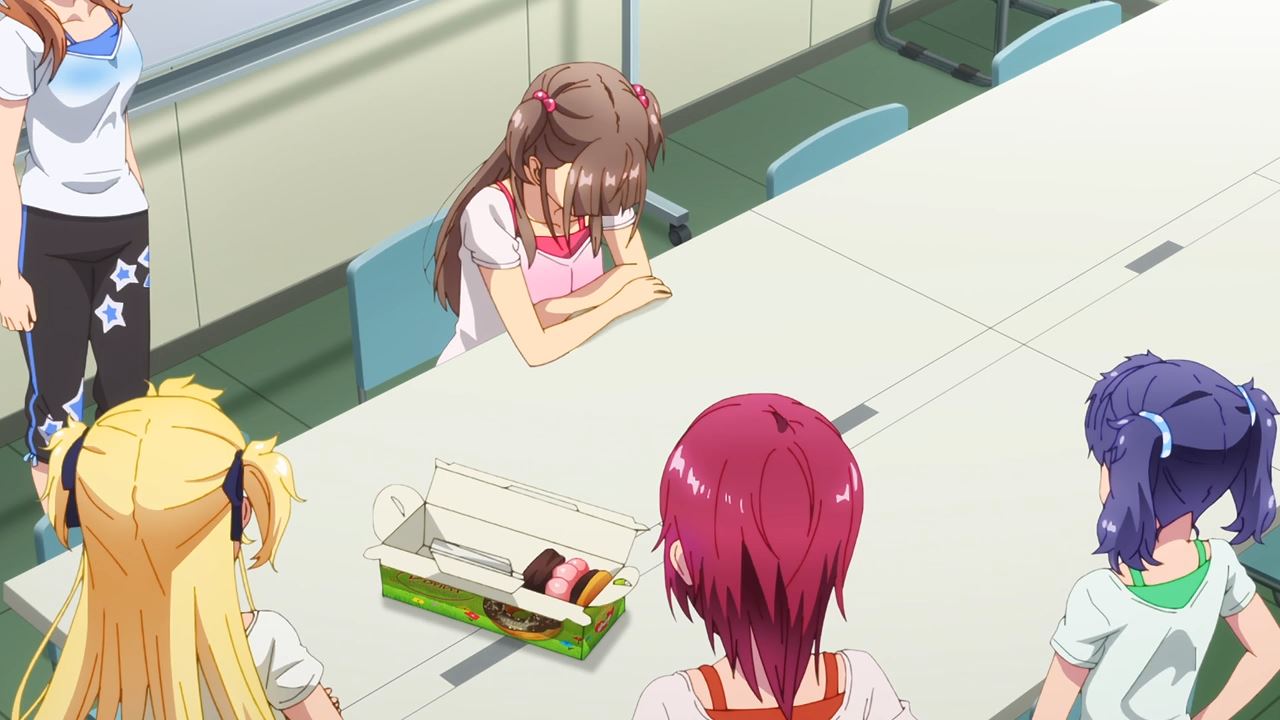 Now then, it’s time to talk about Kyouka Tamaki where after hearing Ren Kurogane’s story, it appears that her resolve was pretty shaken as Kyouka doesn’t have any unique traits aside from being an idol who doesn’t make any mistakes.

Even though Tokka-san supports her, Kyouka Tamaki’s presence is barely non-existent as she’s overshadowed by the likes of Rio Seibu, Yukine Gionji, and the aforementioned Haru Nabatame. Basically, she’s a backup dancer in Ren’s eyes and Kyouka will remain that way! 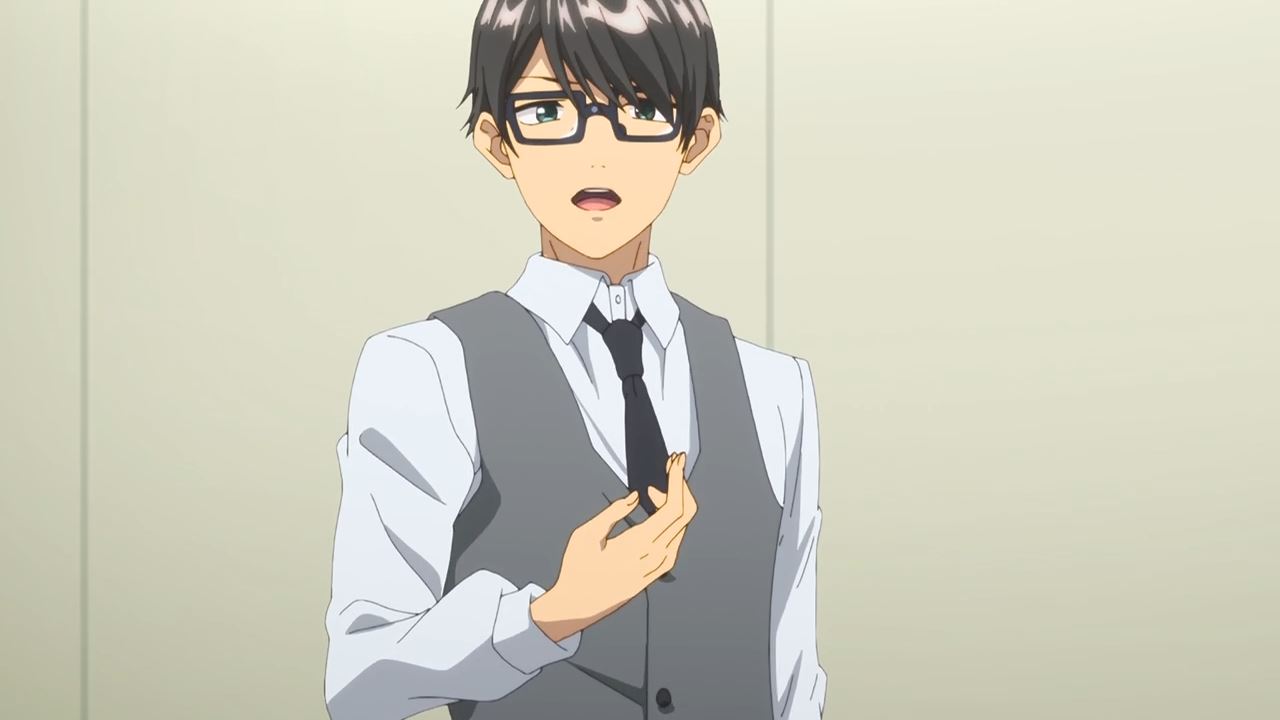 That’s until Naoki Hinasa comes up with a plan that will drastically help Kyouka Tamaki in standing out in front of the audience. Then again, I’m worried that his last-minute plan might backfire on concert day. 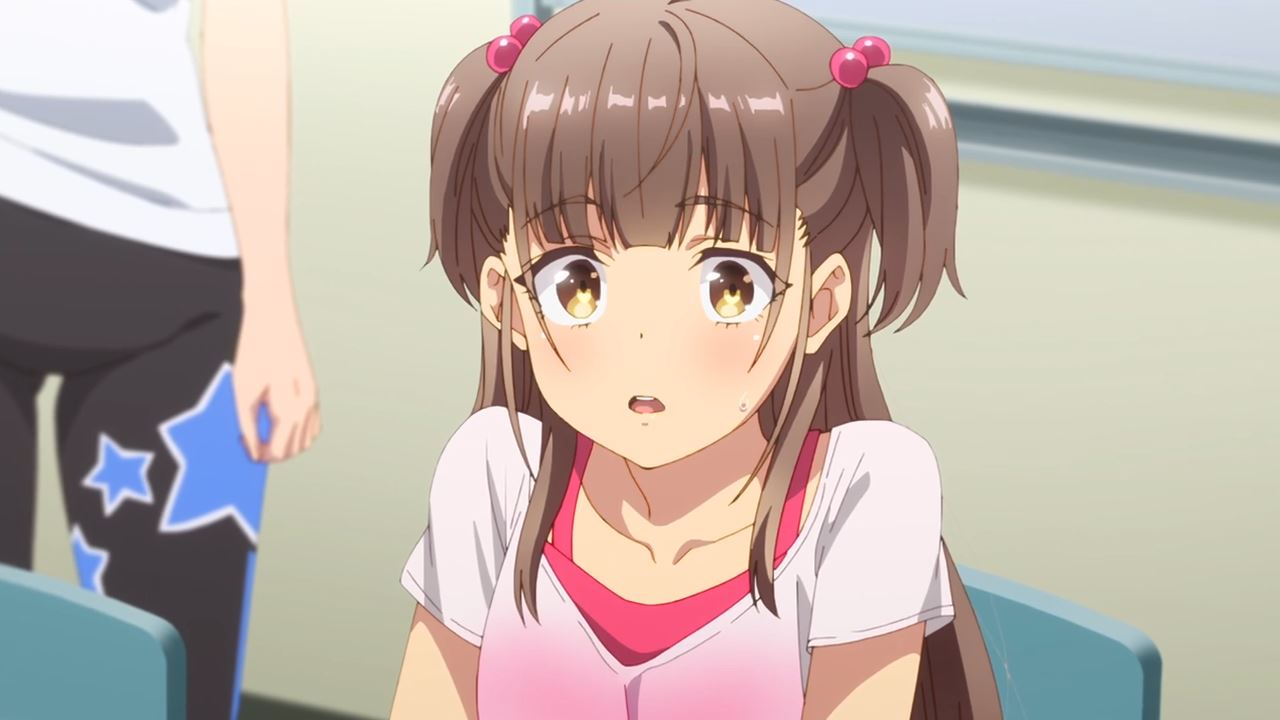 Anyways, let’s hope that Kyouka Tamaki will help her fellow idols in their upcoming anniversary concert at the Nakano Sun Plaza. I’ll see you next time, and I believe that TINGS will prevail!