Legend of the Galactic Heroes: Die Neue These Episode #39 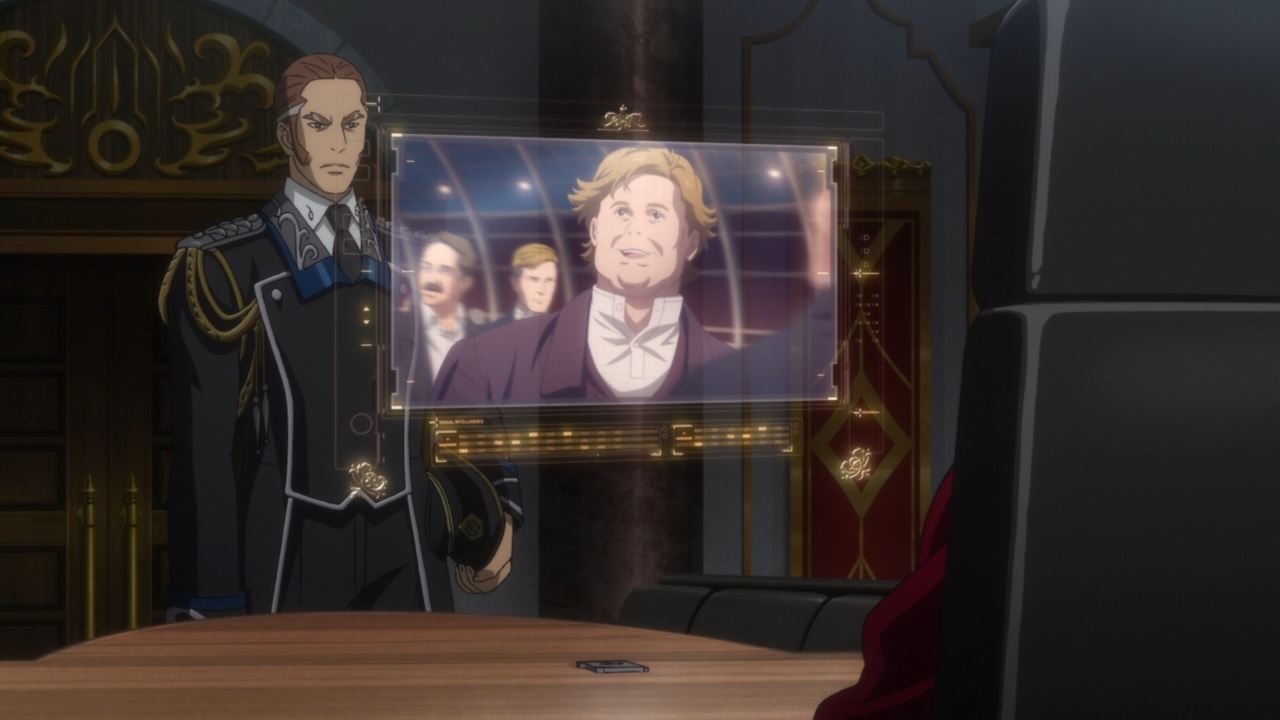 Let’s begin this episode with Superintendent Ulrich Kesler where he told Duke Reinhard von Lohengramm that two defectors have returned to Odin for a major plot.

It’s Count Alfred von Landsberg and his accomplice Leopold Schumacher where they returned to the Galactic Empire to kidnap an important person. This is quite serious as Adrian Rubinsky is trying to undermine Duke Lohengramm’s regime. 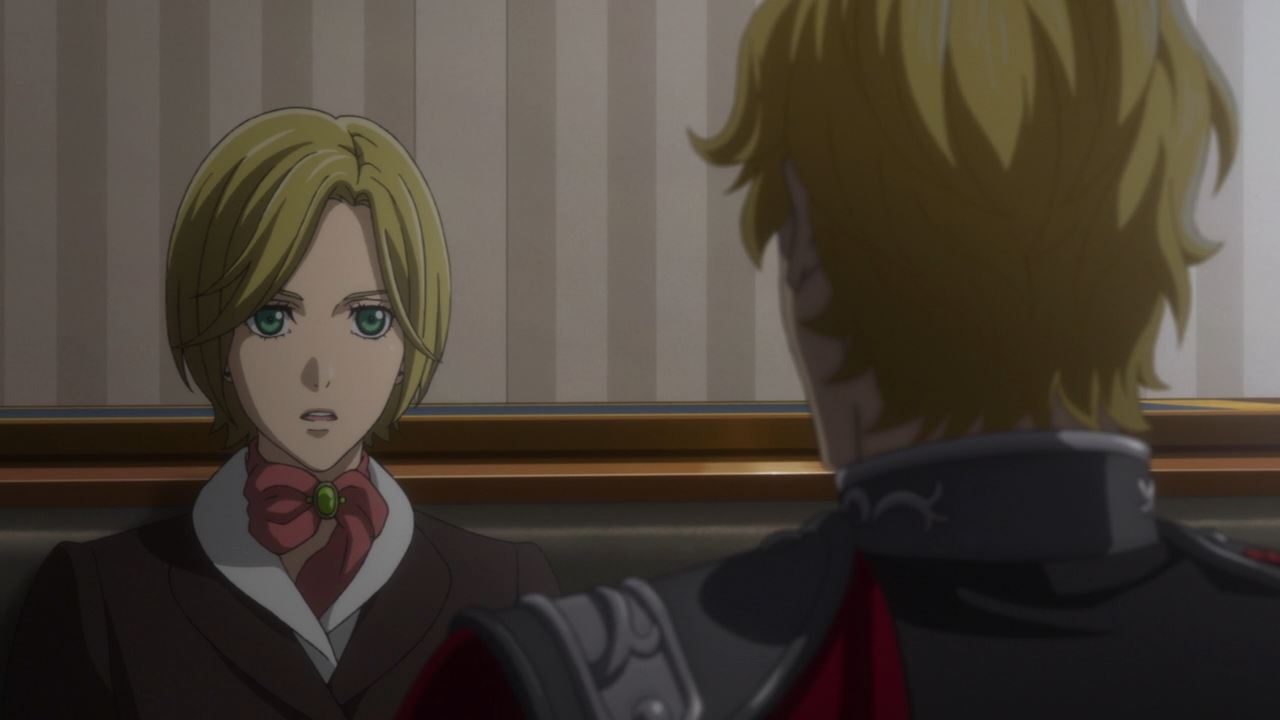 Oh yes, here’s Hildegard von Mariendorf where she told Duke Lohengramm about three possible candidates that both Count Landsberg and Schumacher will try to kidnap. One will be the duke himself, two will be Reinhard’s sister Annerose von Grünewald in which the duke himself will be very angry when they touch her, and three will be Kaiser Erwin Josef II.

Of all the candidates, Hildegard von Mariendorf suspects that Count Alfred von Landsberg and Leopold Schumacher will capture Kaiser Erwin Josef II where they’ll use the young emperor as a bargaining chip since he has the legitimacy in ruling the Galactic Empire over Duke Reinhard von Lohengramm. 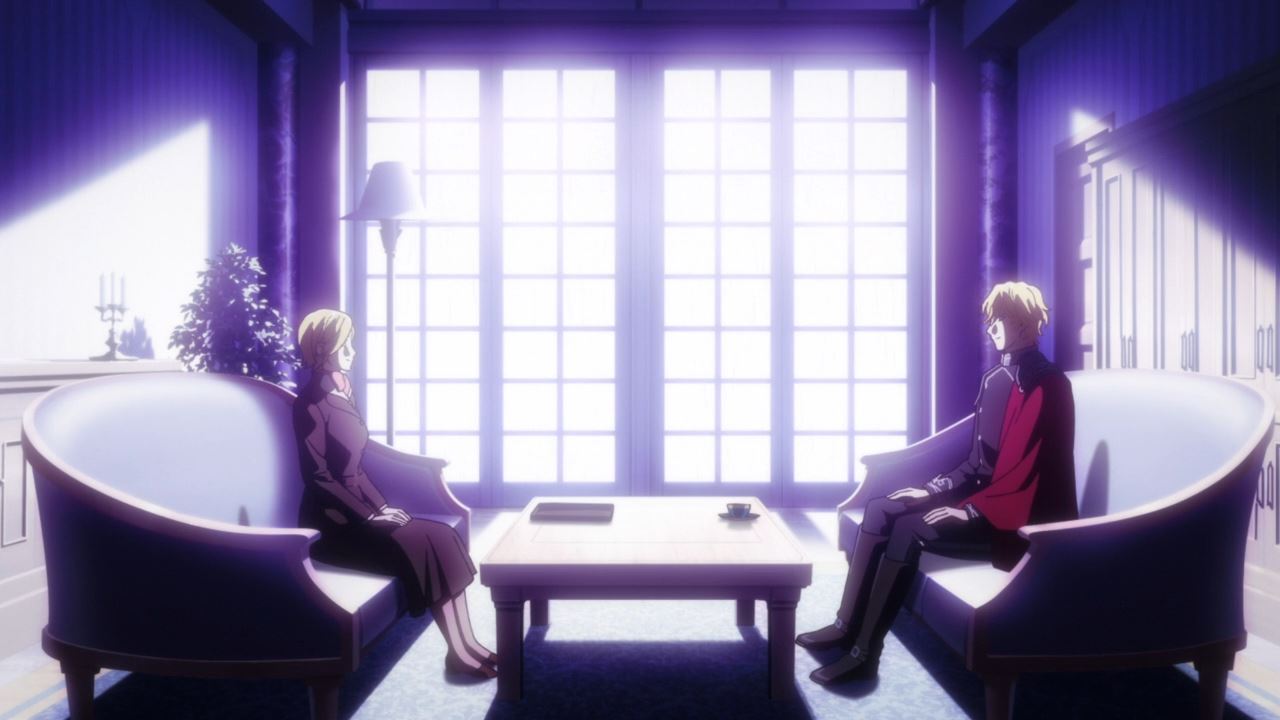 In any case, Duke Lohengramm sees it as a serious matter as he doesn’t want anyone, including the Black Fox of Fezzan Adrian Rubinsky, undermining his rule as prime minister. 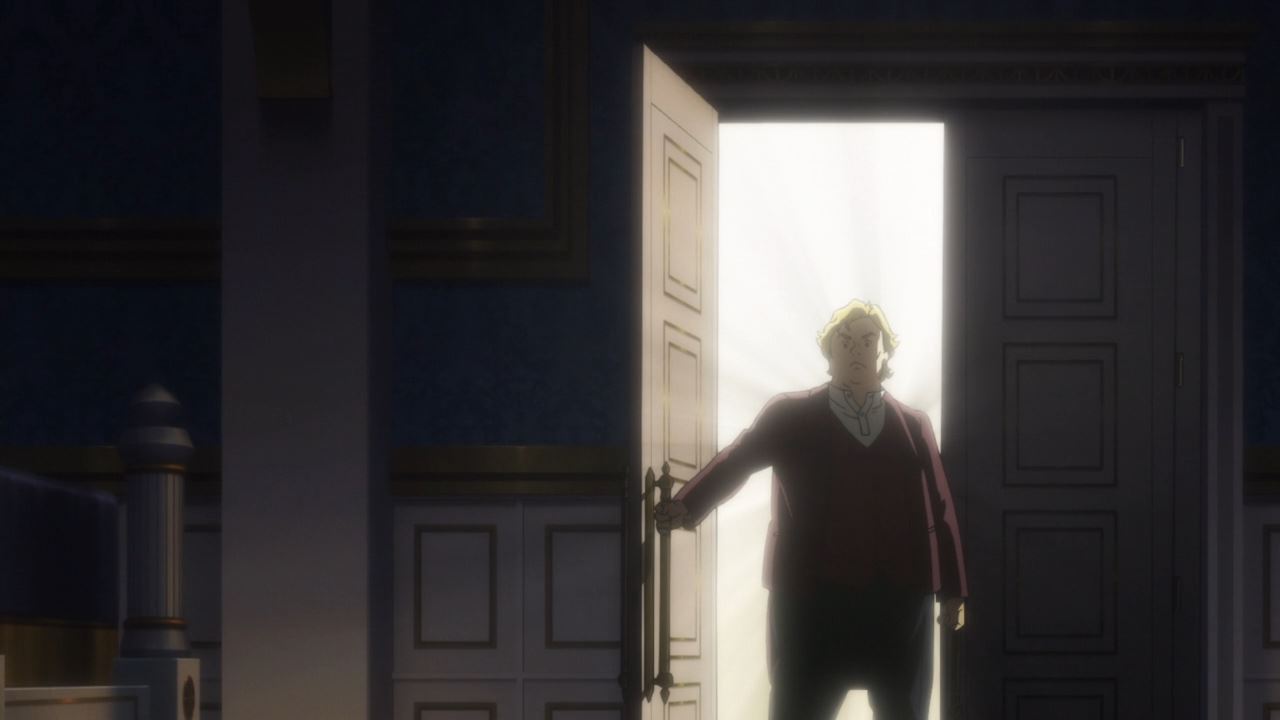 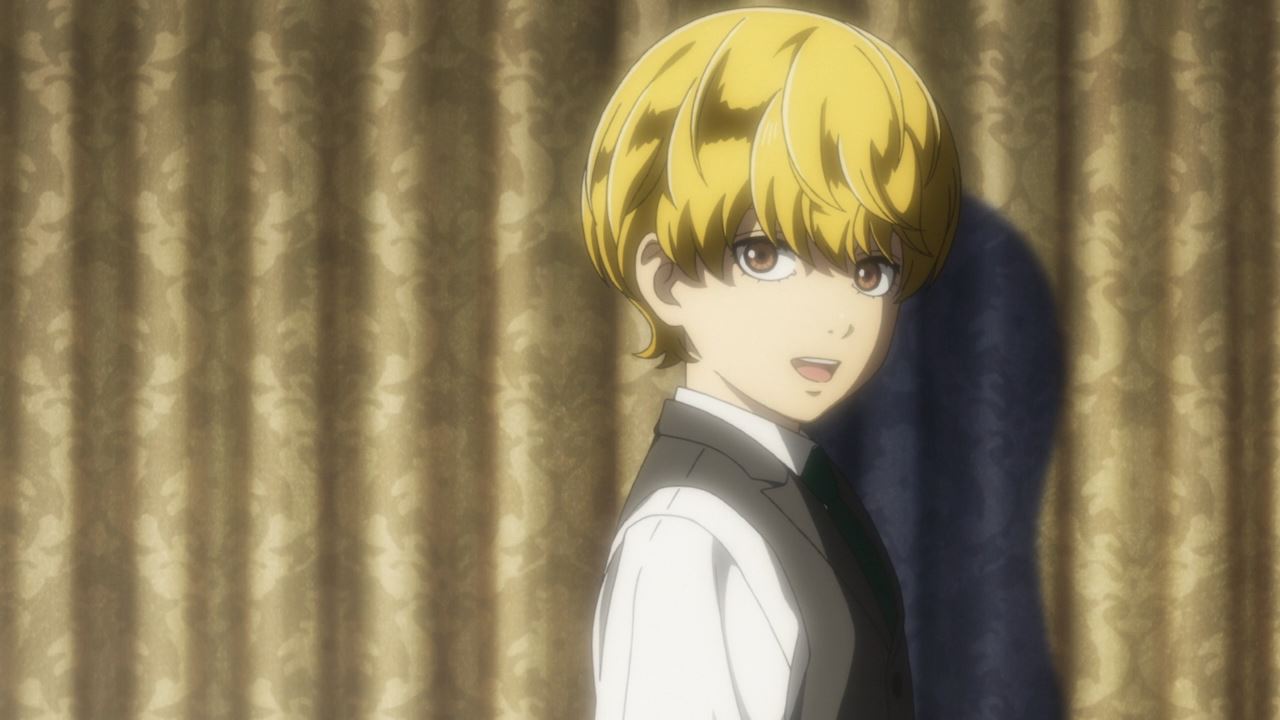 Sadly, it appears that Count Landsberg managed to liberate Kaiser Erwin Josef II as the remnant of the Lippstadt Nobles Coalition will form a government-in-exile, using the kaiser as their figurehead.

Still, Duke Reinhard von Lohengramm is worried that his sister Annerose is in danger, therefore he asked Hildegard von Mariendorf a favor to protect his sister. 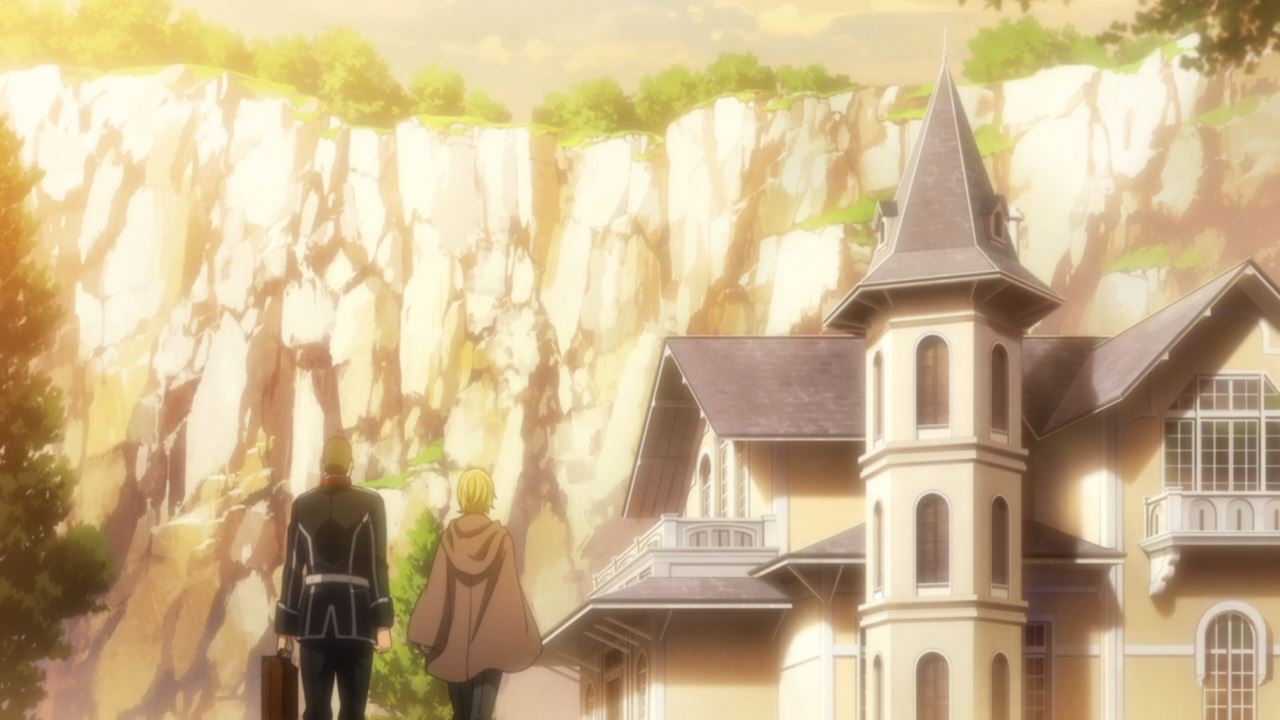 Speaking of Hildegard, she went to Annerose’s mansion where it’s a very isolated place. 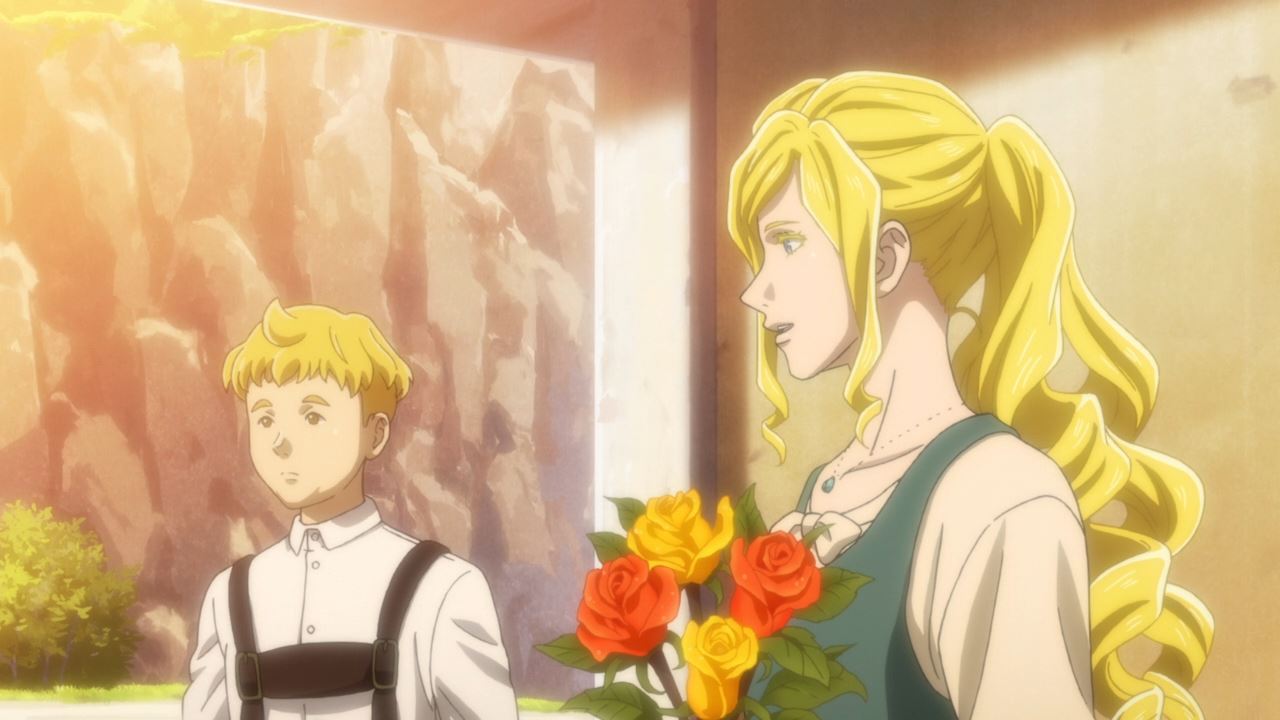 And here’s Annerose von Grünewald where she’s accompanied by Konrad Modell, the son of the late Viscount Modell who participated in the Lippstadt War.

Of course, Annerose is taking care of Konrad as a step-mother even though his father was the enemy who opposed Reinhard’s rise to power. 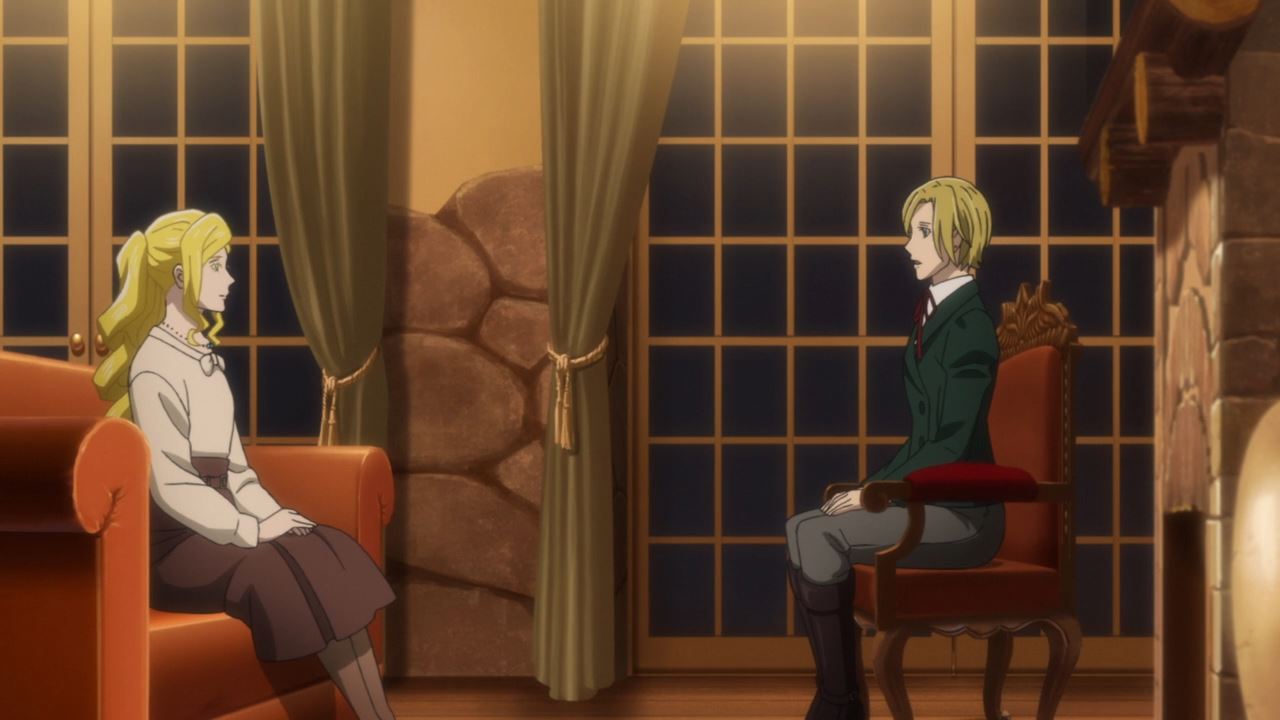 Regardless, Hildegard von Mariendorf told Annerose von Grünewald that Duke Reinhard von Lohengramm will send some guards to protect her as he felt uneasy when Annerose is in danger.

While she doesn’t want anyone protecting her, Hildegard insists of bringing guards to Annerose’s estate as she doesn’t want Reinhard von Lohengramm losing his kindness should he learned that Annerose got seriously hurt or forsake her own brother. 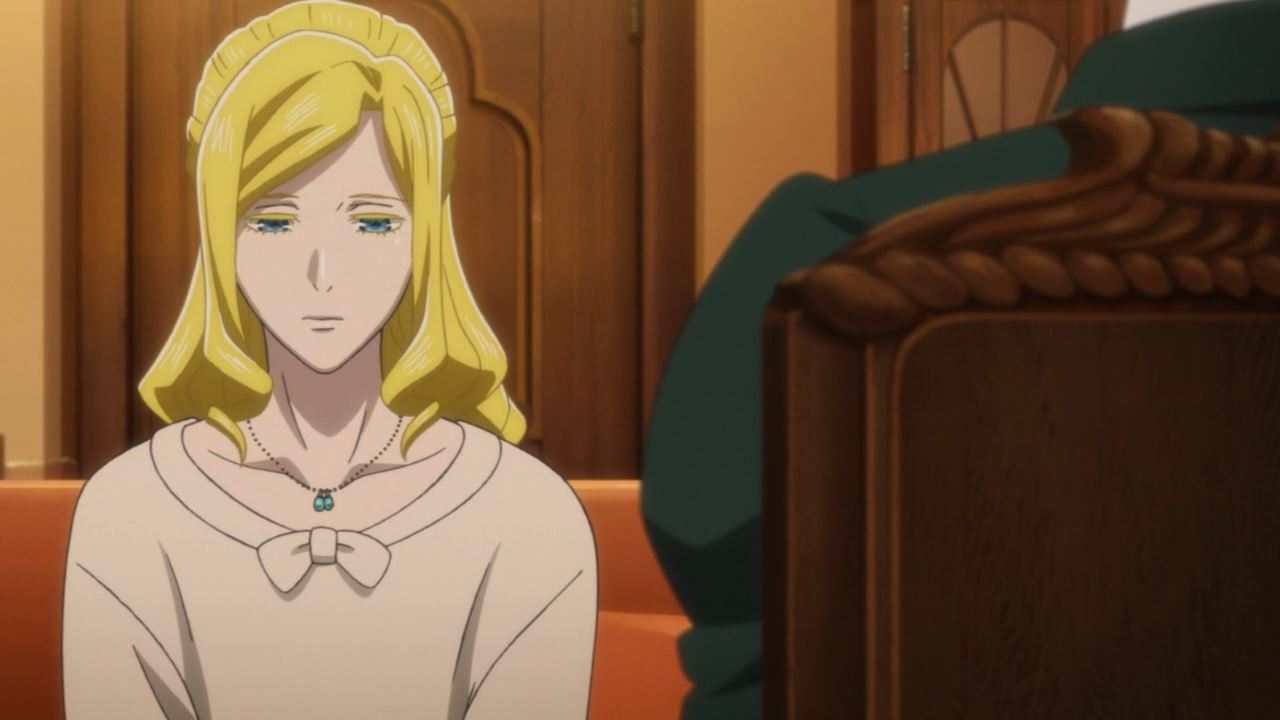 And speaking of Annerose von Grünewald, she blamed herself for Siegfried Kircheis’ death but even so, Hildegard von Mariendorf wants Annerose to live and show emotional support towards her brother even if they can’t see eye-to-eye.

With that said, Fraulein Hildegard will stay at Annerose’s estate for the time being until Count Landsberg and his accomplice Leopold decided not to kidnap Reinhard’s sister. 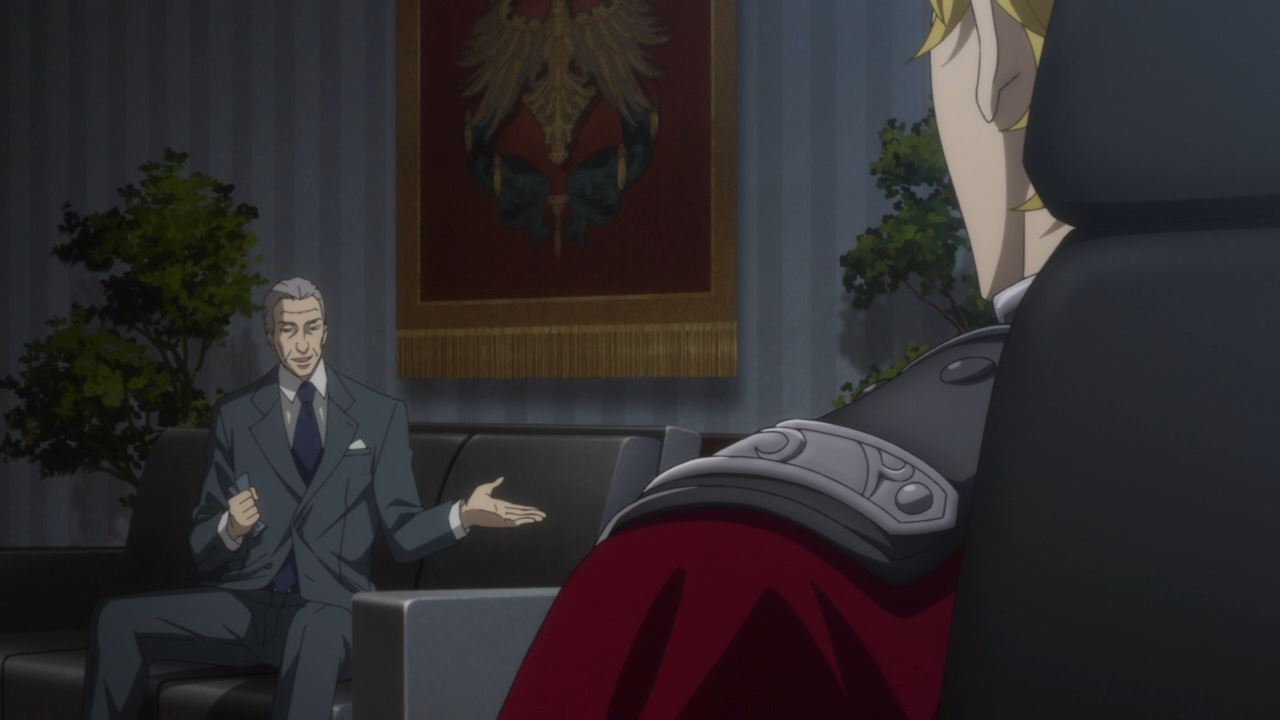 So while Hildegard von Mariendorf is away, Duke Reinhard von Lohengramm will have to deal with Commissioner Nicholas Boltik where he offered a bold proposal. He wants Duke Lohengramm to seize political and military supremacy towards the Galactic Empire and the Free Planets Alliance, all while Adrian Rubinsky and the Dominion of Fezzan will monopolize the entire economy across the galaxy.

While it’s really a bold proposition on behalf of Adrian Rubinsky, Duke Reinhard von Lohengramm knows that the Dominion of Fezzan used Kaiser Erwin Josef II as a bargaining chip for their ambitions. Not only that, but the duke thinks that Landesherr Rubinsky will help Kaiser Erwin Josef II and his allies to establish a government-in-exile in the Free Planets Alliance. 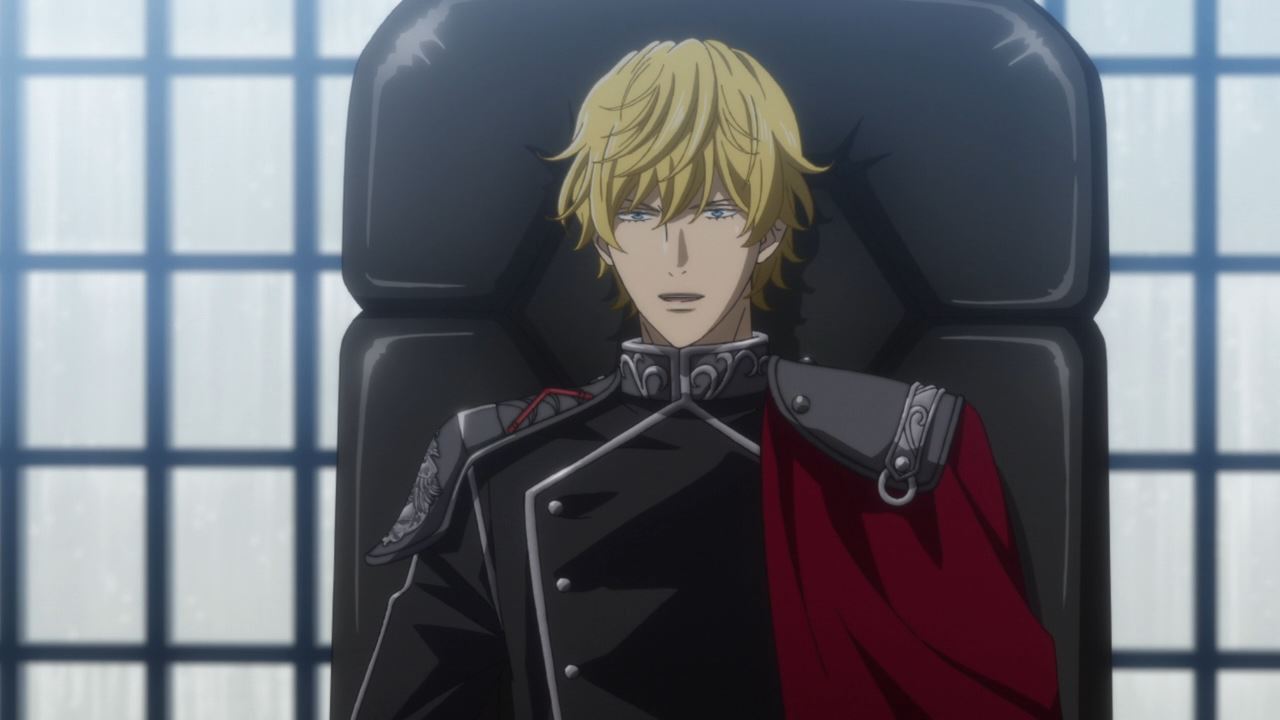 So, Duke Reinhard von Lohengramm told Commissioner Nicholas Boltik that if the Dominion of Fezzan wants to help him in seizing power, Duke Lohengramm wants his Imperial Fleet to travel across the Fezzan Corridor. 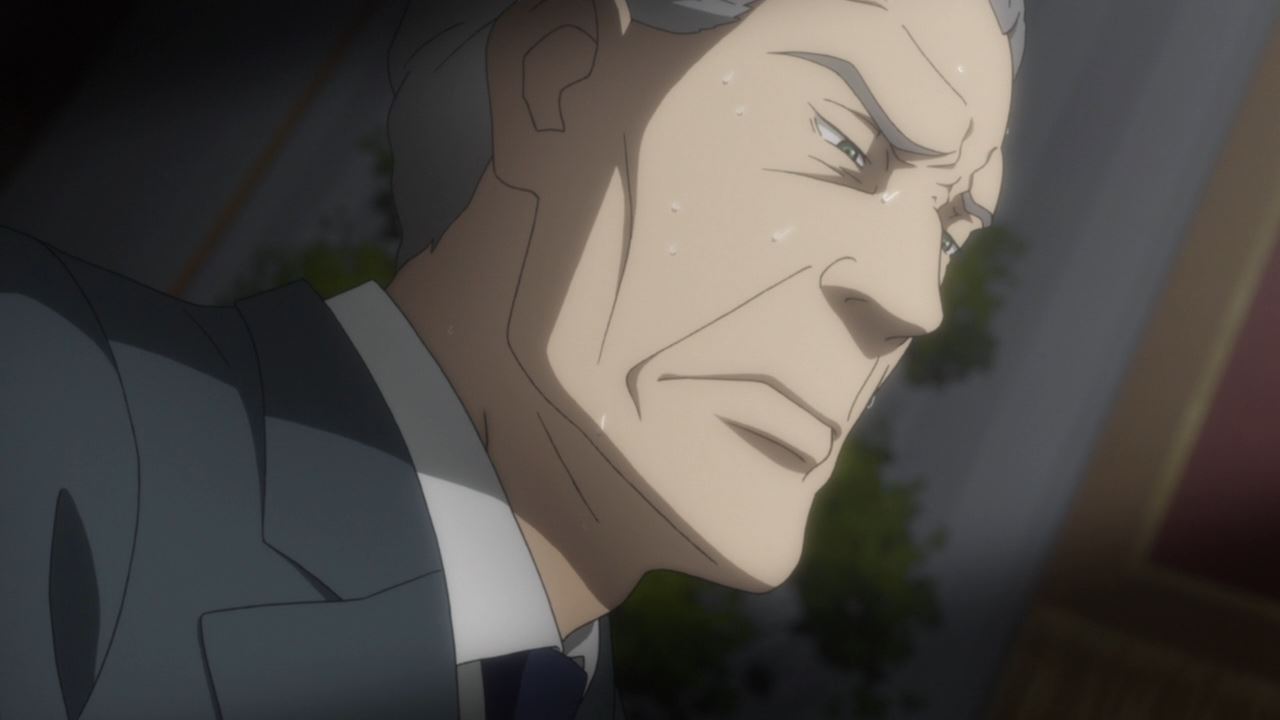 And when he heard the duke’s proposal, Commissioner Nicholas Boltik felt nervous as the Dominion of Fezzan will be in trouble once the Imperial Fleet crossed the corridor. Even worse is there’s a possibility for Duke Lohengramm to seize control of Fezzan, crushing Adrian Rubinsky and the entire dominion with it.

With that said, it looks like the commissioner’s proposal didn’t work out in the end as Duke Reinhard von Lohengramm is one step ahead of him. Even if Adrian Rubinsky and his cronies managed to take the child emperor, the duke will surely crush them and take over the Galactic Empire in no time. 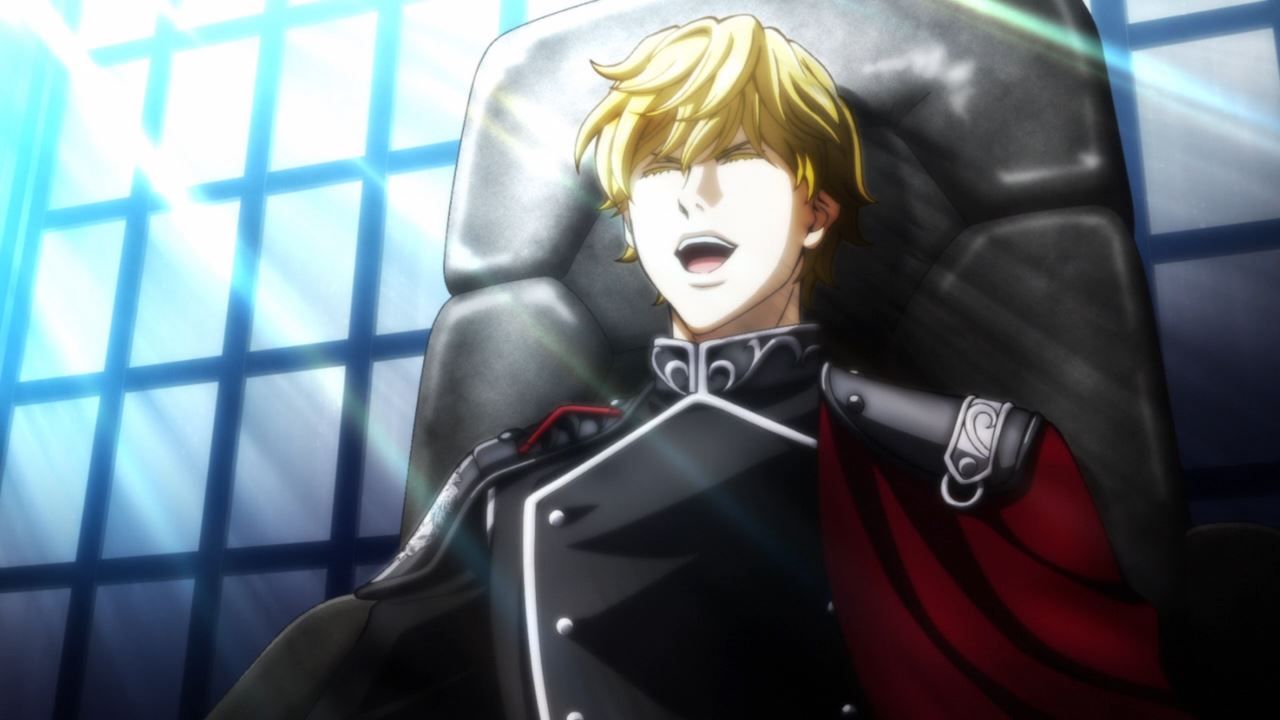 But anyways, looks like Duke Reinhard von Lohengramm won in the end as he laughs at the commissioner’s failure.

Of course, he needs to consolidate power as soon as possible so that Kaiser Erwin Josef II and his allies will be too late to seize control over the Galactic Empire.