Posted on November 8, 2021 by benigmatica 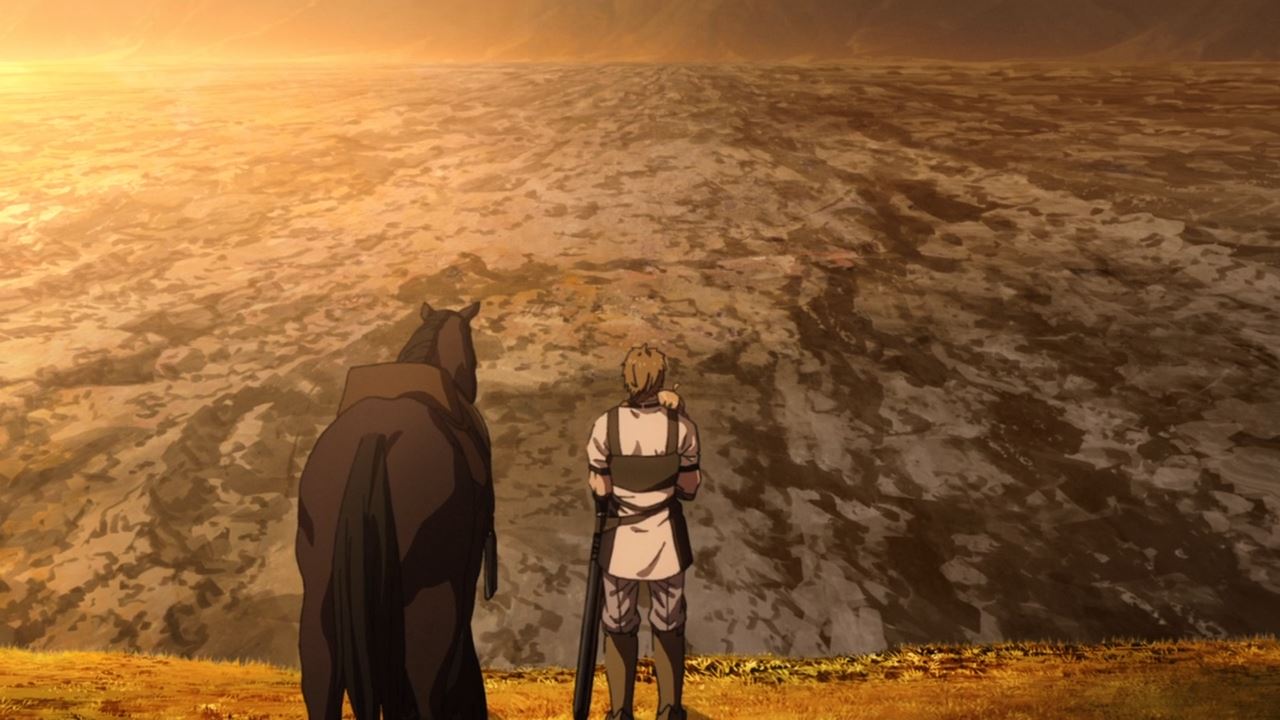 Well, this is the aftermath of the Mana Catastrophe where Paul and his daughter Norn saw that their hometown of Buena Village was wiped out from the Fittoa Region.

This led Paul on a quest to rescue the villagers, including the rest of his family as they’re caught by the disaster. Although his mental and emotional health has taken its toll to the point that Paul drink lots of alcohol, the only thing that kept his sanity is Norn as she’s with him on that fateful day. 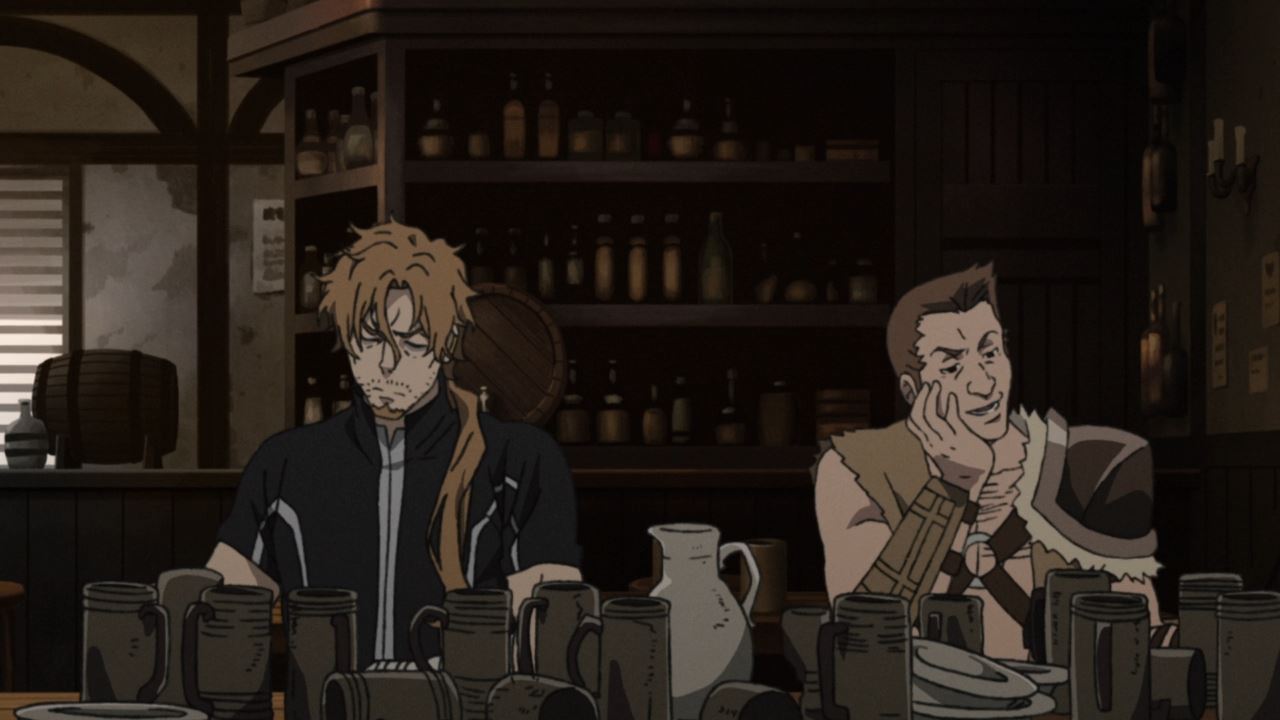 But let’s move onto the present where Gisu is at the bar, telling some scathing remarks towards Paul Greyrat on how pathetic he is, especially when Paul punched his own son back then. Okay, how did Gisu end up in Millishion? And by the way, Rudy made a big mistake on not reading the room in the previous episodes.

One more thing, Gisu is impressed on how Rudeus survived in the Demon Continent as most kids of his age would simply die off or become slaves by cruel demons, therefore Gisu told Paul that he should be lucky that his son managed to protect him and Eris. Still, I think both Paul and Rudy should reconcile as soon as possible. 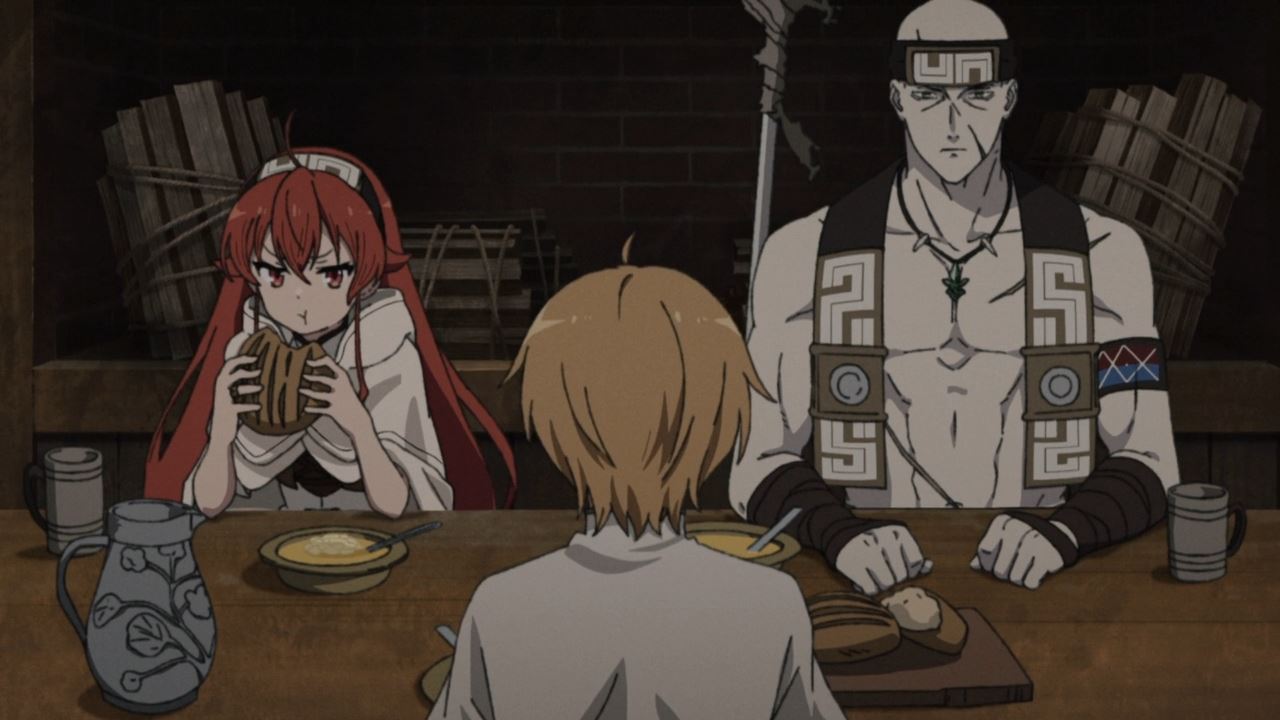 Now then, let’s move onto Rudeus Greyrat and his party where they’re having an awkward breakfast. I guess Rudy is still depressed after what happened in the previous episode. 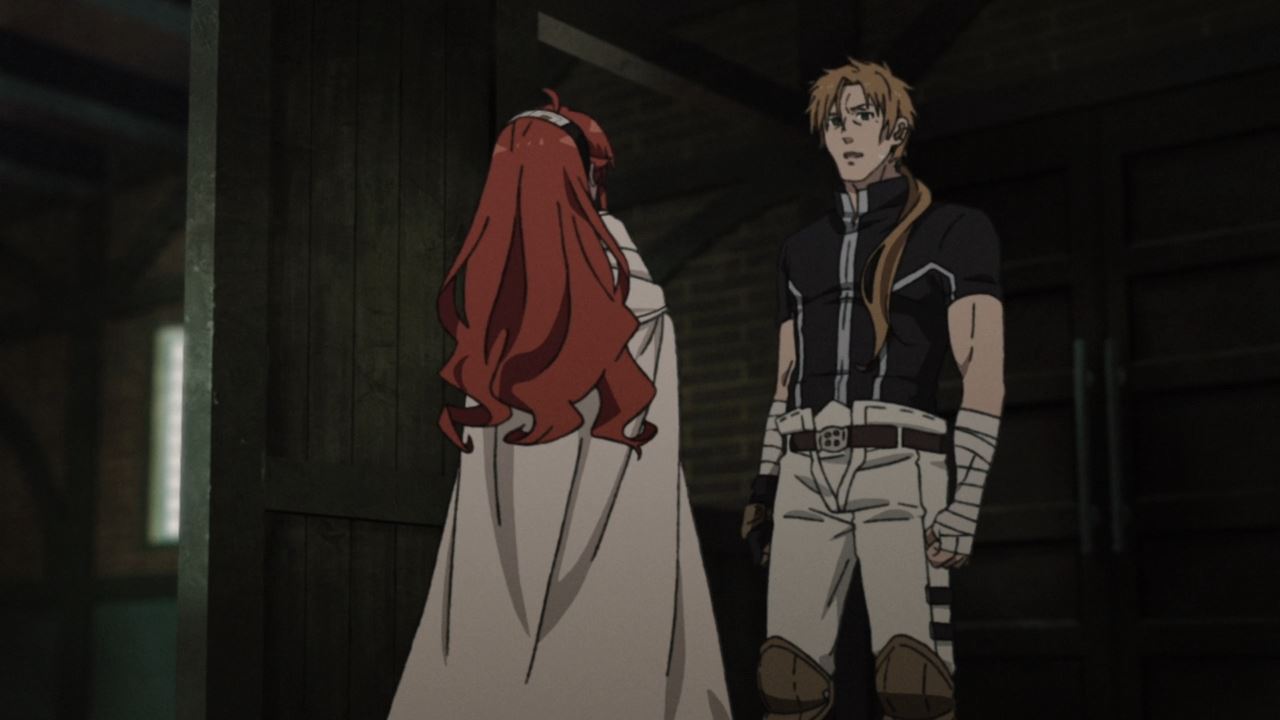 Anyways, here’s Paul where he wants to see his son Rudeus, although Eris doesn’t want him to reach her compatriot. 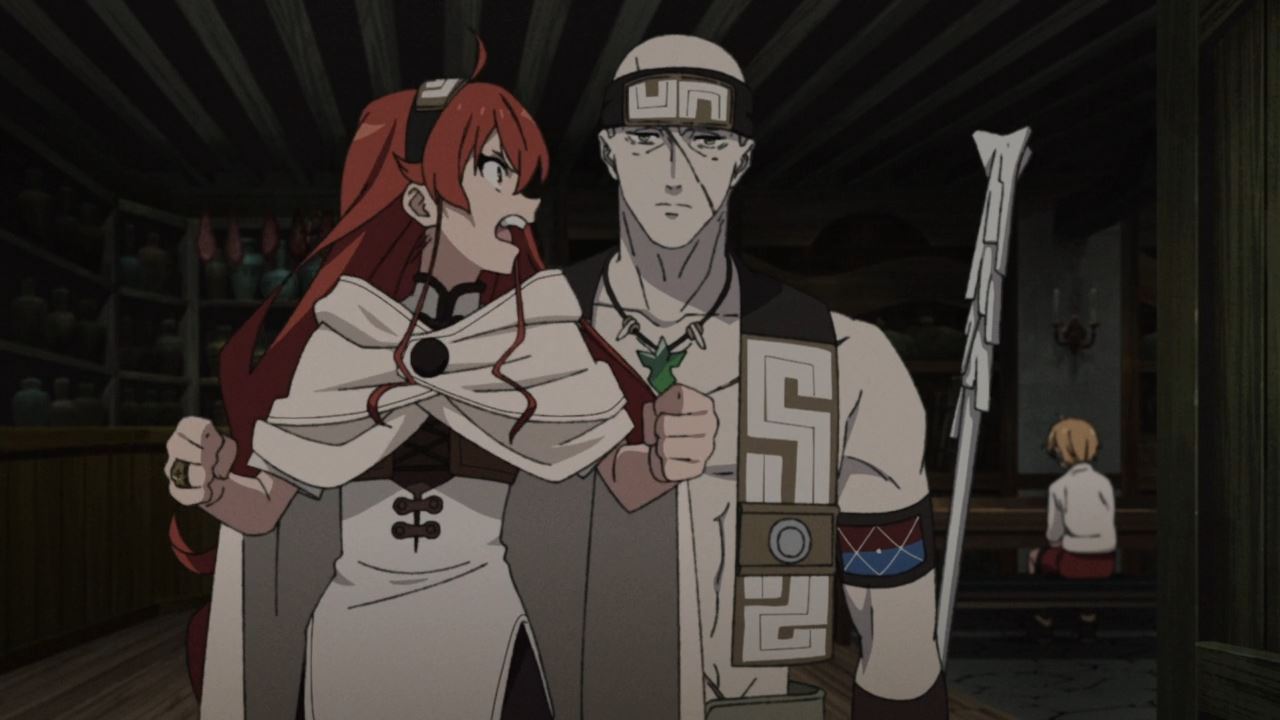 Unfortunately for Eris, Ruijerd Superdia will have to take her somewhere as he needs to let Paul talk to his son privately. Sorry Eris, but this is a mano-o-mano talk between Paul and Rudy. 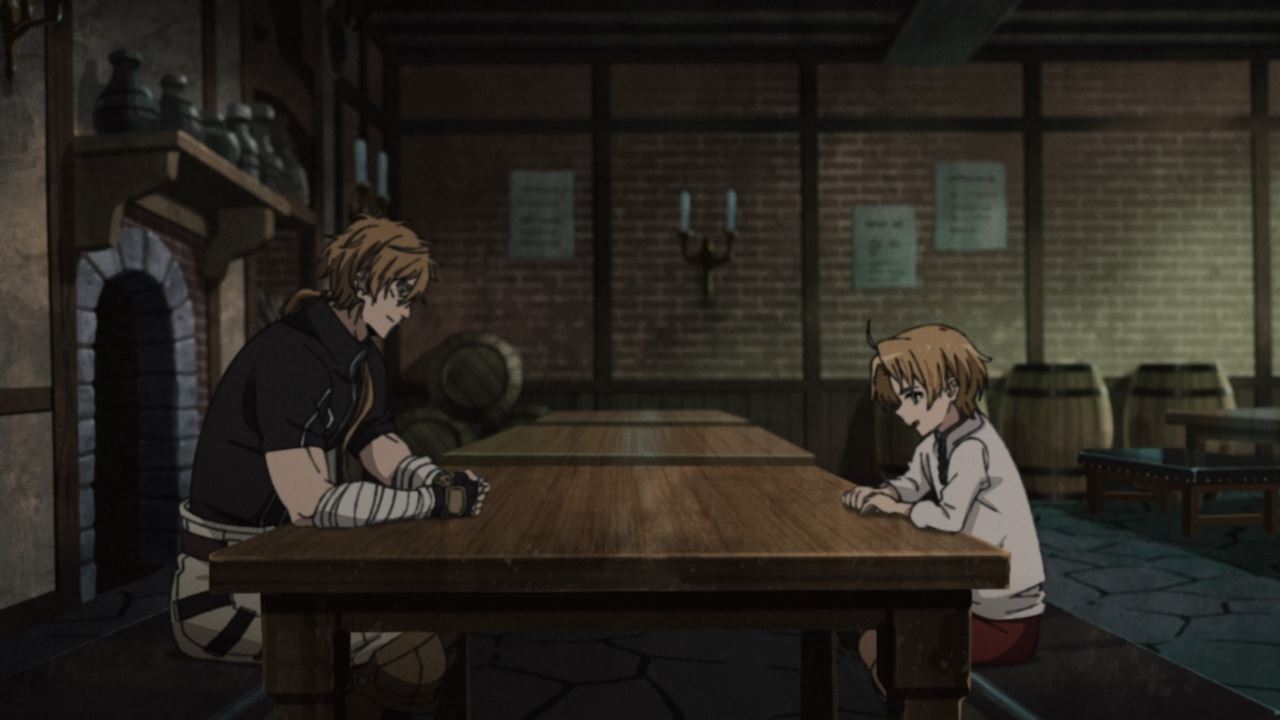 With that said, looks like both Paul and Rudy apologized to each other for the bar brawl, although the latter really regretted on making bad remarks to his dad as Rudy is not aware on what his father is going through with his life. 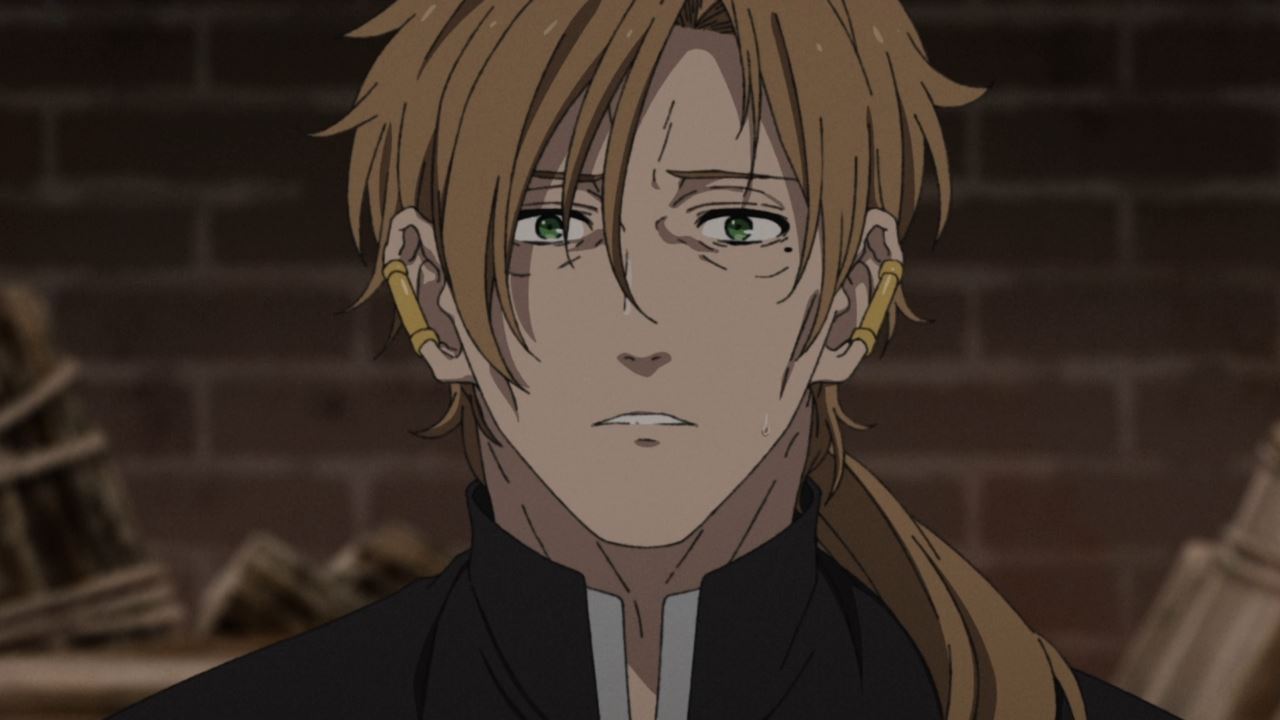 Oh yeah, here’s Paul’s face where I’m glad that he managed to shave his beard. Of course, Rudy saw his father’s face and reminds him of his previous time when a classmate came to visit him. 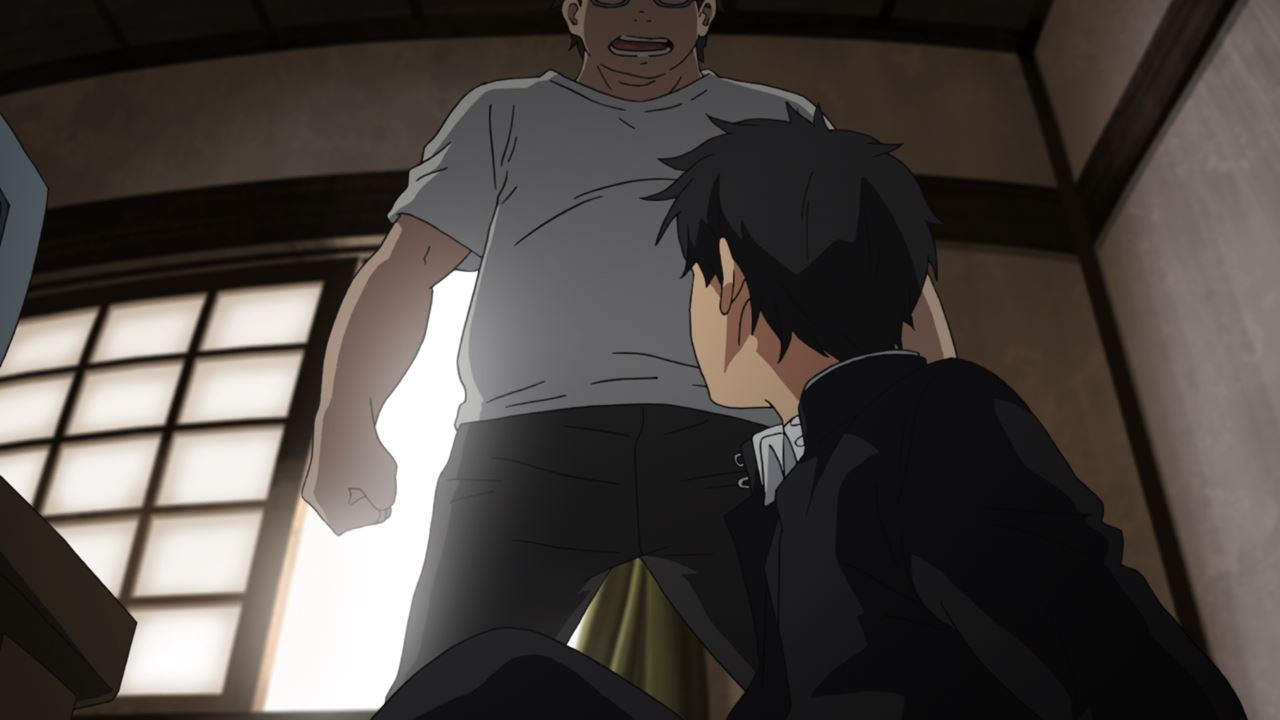 Unfortunately, his previous life was terrible where he doesn’t accept his classmate’s sympathy, thinking that his classmate might betray and bully him.

While I understand that he’s pretty much pessimistic that he doesn’t want to trust others, I only wish that someone would genuinely reach out to him instead of helping that poor guy in an condensing manner. 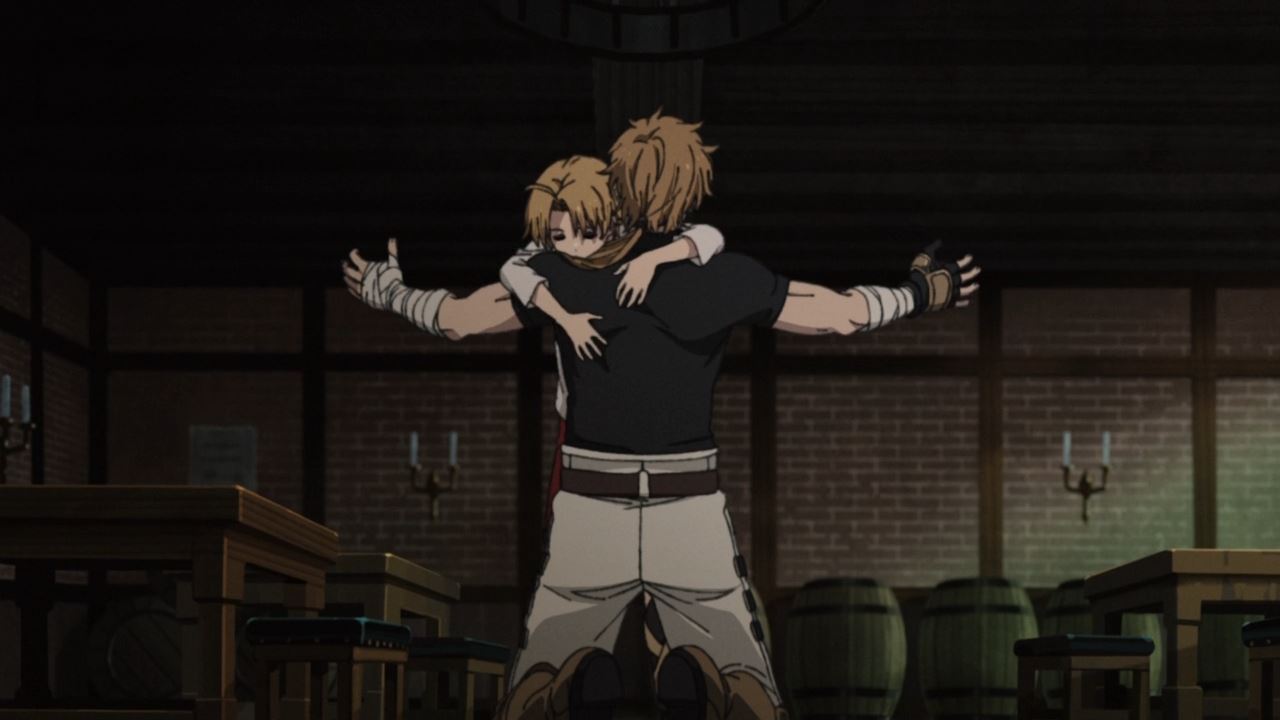 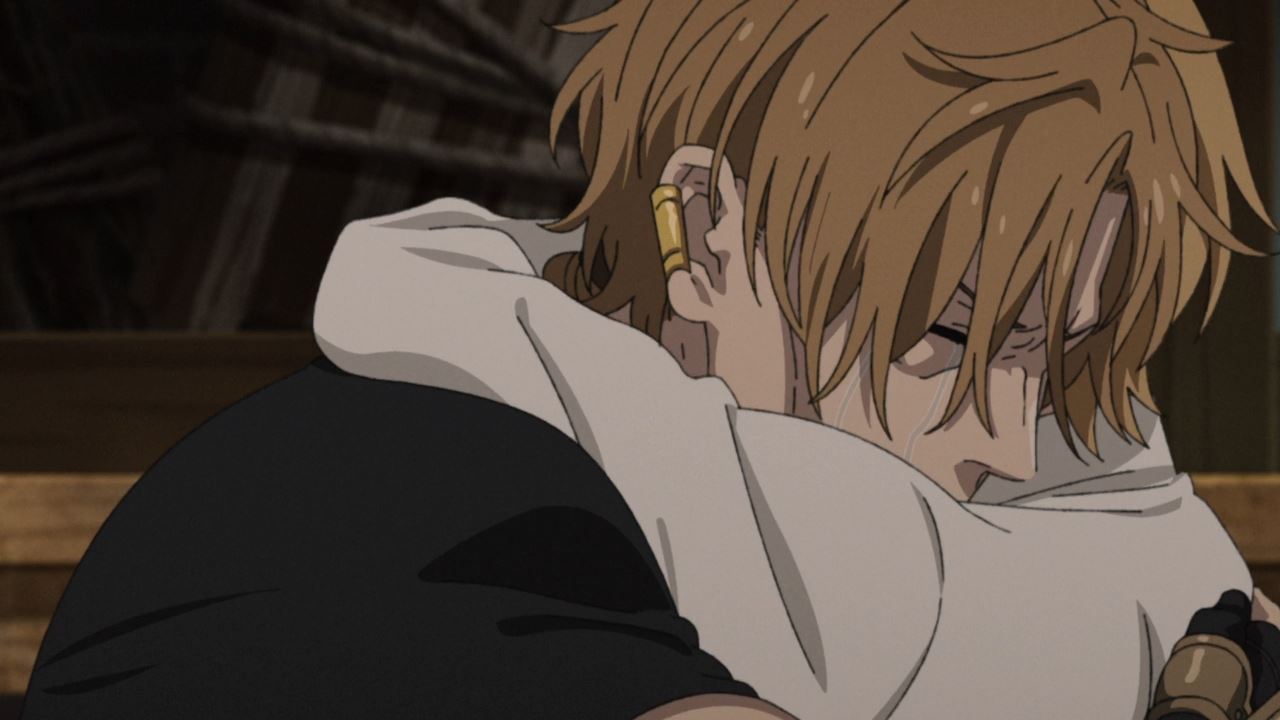 With that said, both Paul and Rudeus Greyrat reconciled as they share a hug. Glad that their issues have finally resolved, but I’m really happy that Paul got to hug his son again. 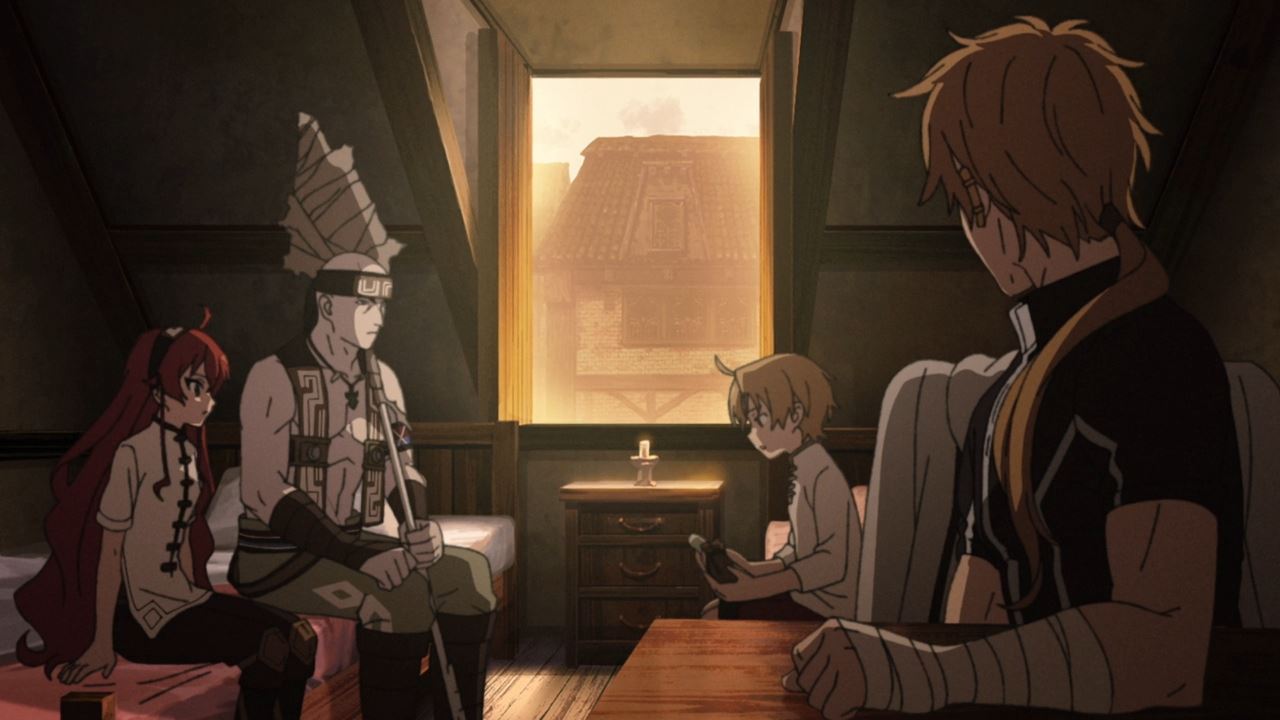 Now then, it’s time to deliver the bad news to Eris Boreas Greyrat as Rudy told her that Buena Village and Roa have disappeared, meaning that Eris has no place to return to.

But for Eris Boreas Greyrat however, she’s not mad about it as Eris accepted that her hometown has disappeared from the map. So, the only thing they need to focus is to rescue their respective families… if they’re still alive of course. 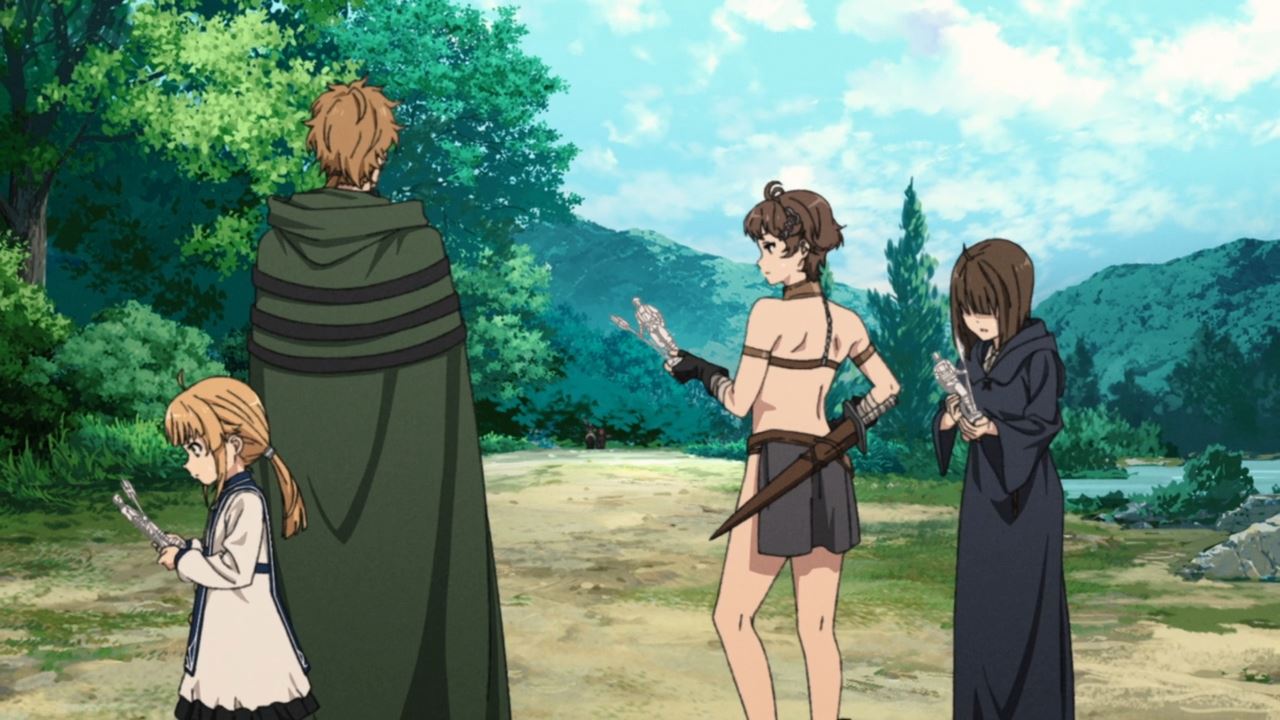 For now, both Rudy and his father Paul will have to go onto their separate ways. Oh yeah, looks like Rudy gave them a statue of Ruijerd Superdia as a present, including Norn where Rudy wants to make amends to his little sister. 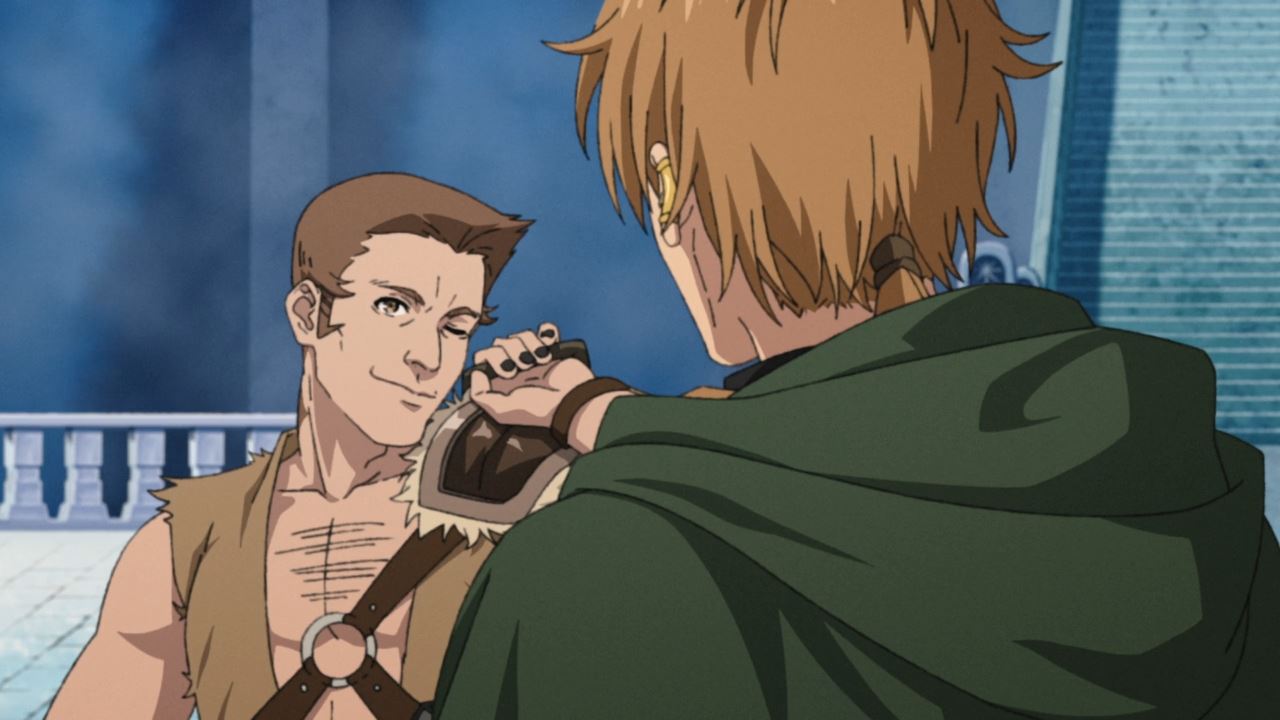 One last thing, here’s Gisu where he’s gonna travel to another town and possibly meet Rudy along the way. Honestly, Gisu is one mysterious guy who pops up everywhere. 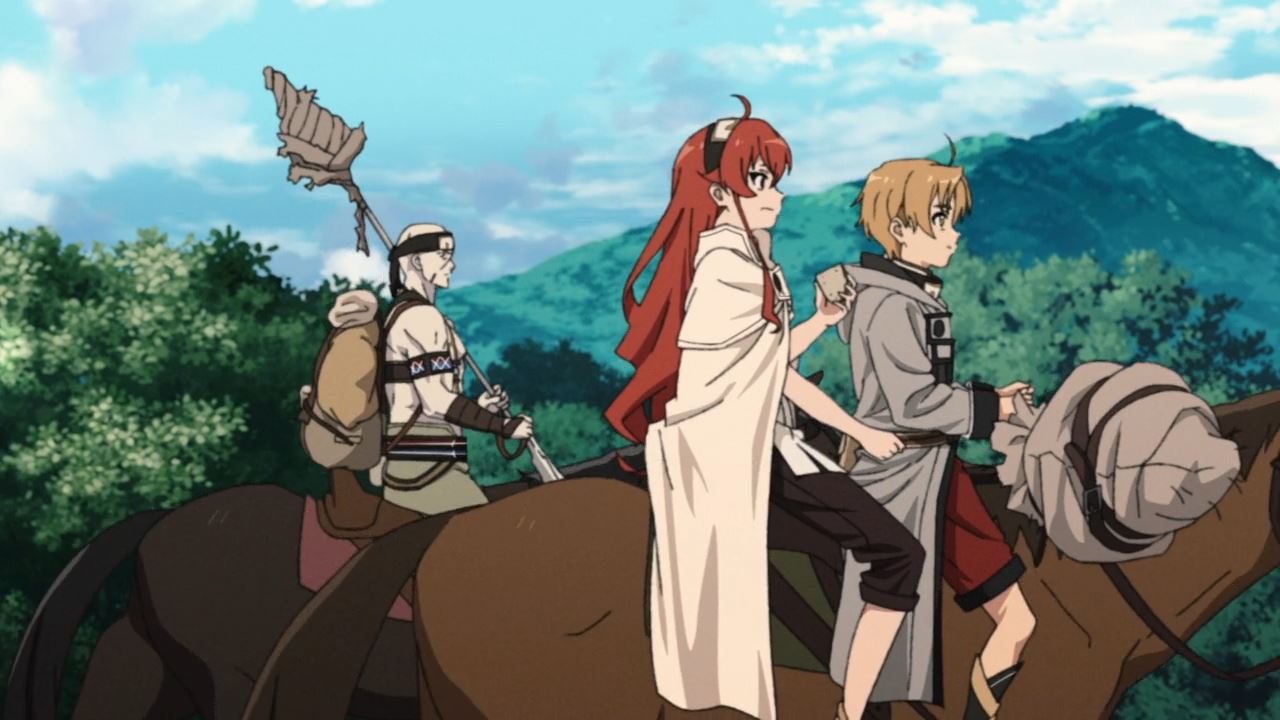 But that’s about it for this episode as Rudy and his party will head to another town. Let’s hope that Rudy might encounter his missing family members there.